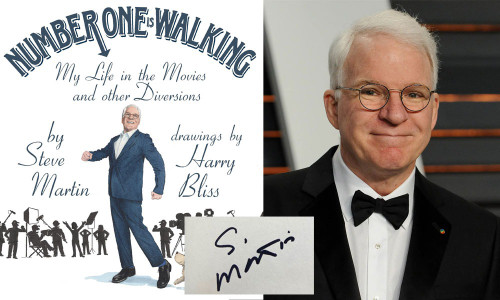 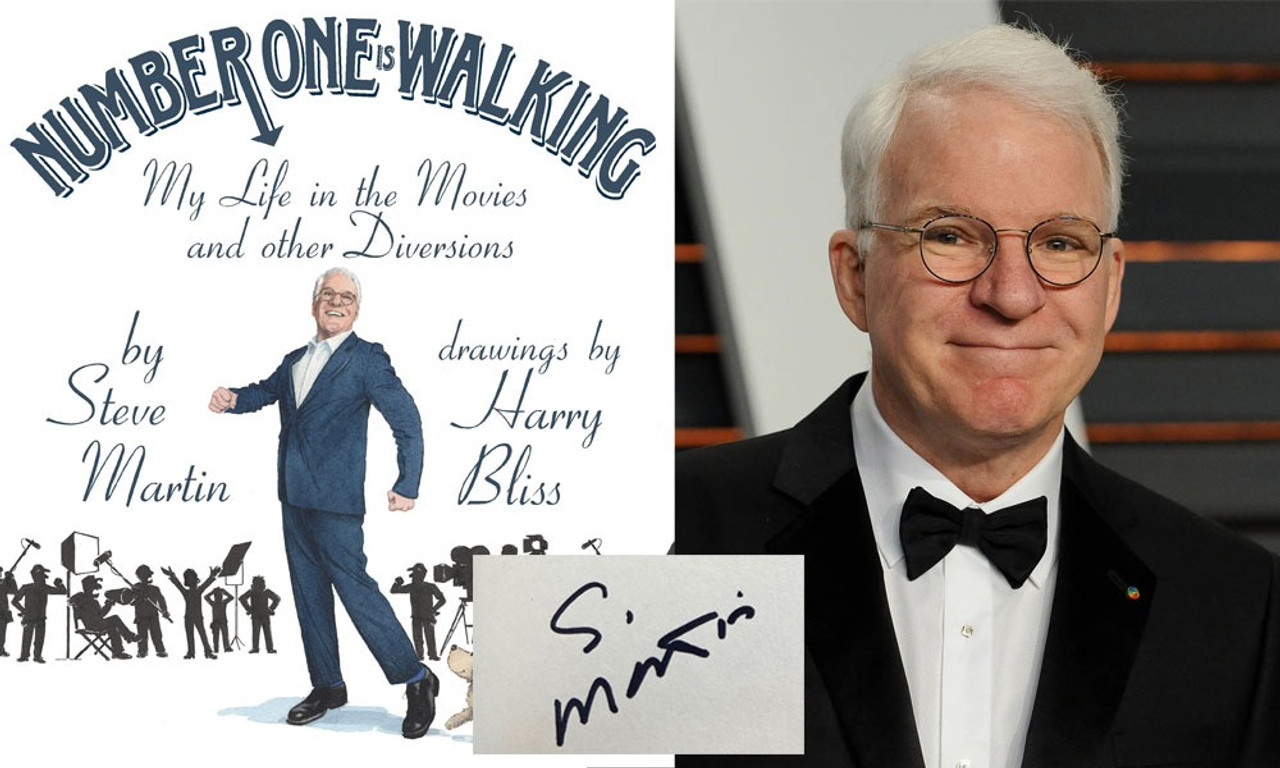 Personally signed by Steve Martin, one of the most well-known talents in entertainment

Limited to only 50 Signed First Edition slipcased copies with numbered COA, never to be offered again! 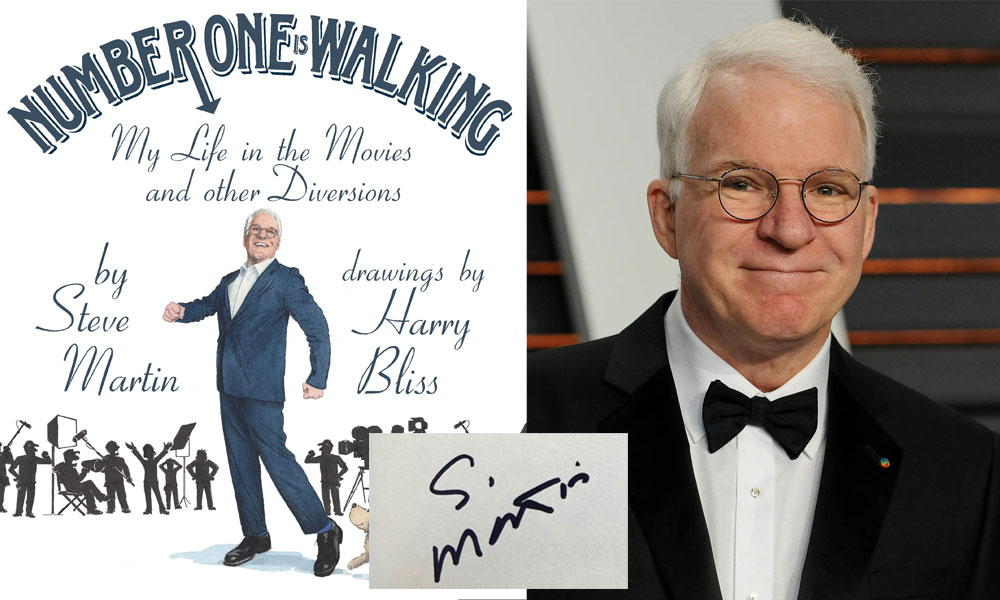 Celadon Books (November 15, 2022). Steve Martin  "Number One Is Walking: My Life In The Movies and Other Diversions". This first edition has been personally signed by Steve Martin directly into the book. Limited to only 50 slipcased copies with hand-numbered Certificate of Authenticity. Drawings by Harry Bliss. As new, sealed without any flaws.

Steve Martin is one of the most well-known talents in entertainment. His work has earned him an Academy Award®, five Grammy® awards, an Emmy®, the Mark Twain Award, and the Kennedy Center Honors.

As an author, Martin’s work includes the novel An Object of Beauty, the play Picasso at the Lapin Agile, a collection of comic pieces, Pure Drivel, a bestselling novella, Shopgirl, and his memoir Born Standing Up. Martin’s films include The Jerk, Planes, Trains & Automobiles, Roxanne, Parenthood, L.A. Story, Father of the Bride, and Bowfinger.

Steve Martin is one of today's most talented performers. His huge successes as a film actor include such credits as ROXANNE, FATHER OF THE BRIDE, PARENTHOOD and THE SPANISH PRISONER. He has won Emmys for his television writing and two Grammys for comedy albums. In addition to the bestselling PURE DRIVEL, he has written several plays, including Picasso at the Lapin Agile and a highly acclaimed novel, SHOPGIRL. His work appears in The New Yorker and The New York Times.

About "Number One Is Walking"

Number One Is Walking is Steve Martin’s cinematic legacy—an illustrated memoir of his legendary acting career, with stories from his most popular films and artwork by New Yorker cartoonist Harry Bliss.

Steve Martin has never written about his career in the movies before. In Number One Is Walking, he shares anecdotes from the sets of his beloved films—Father of the Bride, Roxanne, The Jerk, Three Amigos, and many more—bringing readers directly into his world. He shares charming tales of antics, moments of inspiration, and exploits with the likes of Paul McCartney, Diane Keaton, Robin Williams, and Chevy Chase. Martin details his forty years in the movie biz, as well as his stand-up comedy, banjo playing, writing, and cartooning, all with his unparalleled wit.

With gorgeously illustrated cartoons and single-panel “diversions” in Steve and Harry’s signature style, Number One Is Walking is full of the everyday moments that make up a movie star’s life, capturing Steve Martin’s singular humor and acclaimed career in film. The perfect gift from the team who brought you the #1 New York Times bestseller A Wealth of Pigeons.

Stephen Glenn Martin (born August 14, 1945) is an American actor, comedian, writer, producer, and musician. He has won five Grammy Awards, a Primetime Emmy Award, and was awarded an Honorary Academy Award at the Academy's 5th Annual Governors Awards in 2013. Additionally, he was nominated for two Tony Awards for his musical Bright Star in 2016. Among many honors, he has received the Mark Twain Prize for American Humor, the Kennedy Center Honors, and an AFI Life Achievement Award. In 2004, Comedy Central ranked Martin at sixth place in a list of the 100 greatest stand-up comics.

Martin is also known for writing the book and lyrics to the musical Bright Star (2016) and the comedy Meteor Shower (2017), both of which premiered on Broadway. While he has played banjo since an early age, and included music in his comedy routines from the beginning of his professional career, he has increasingly dedicated his career to music since the 2000s, acting less and spending much of his professional life playing banjo, recording, and touring with various bluegrass acts, including Earl Scruggs, with whom he won a Grammy for Best Country Instrumental Performance in 2002. His first solo music album, The Crow: New Songs for the 5-String Banjo (2009) received the Grammy Award for Best Bluegrass Album. 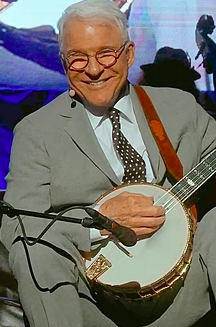 Harry Bliss (born March 9, 1964 in Rochester, New York) is an American cartoonist and illustrator. Bliss has illustrated many books, and produced hundreds of cartoons and 21 covers for The New Yorker. Bliss has a syndicated single-panel comic titled Bliss. Bliss is syndicated through Tribune Content Agency and appears in over 80 newspapers in the United States, Canada and Japan. 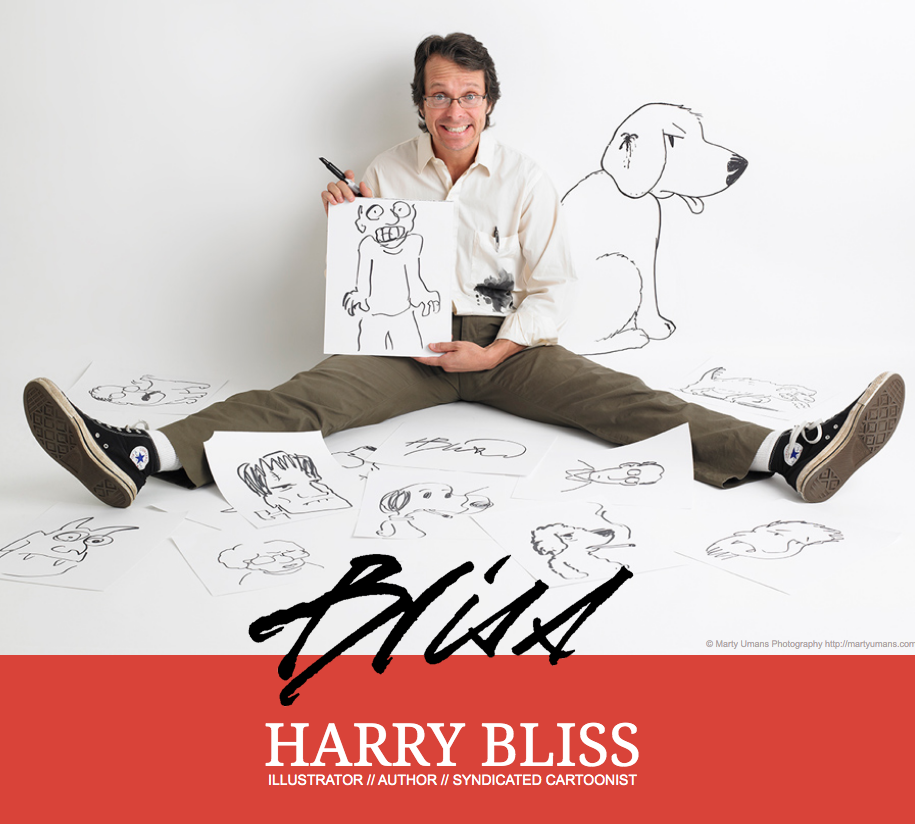 "Irresistibly charming...Film buffs, comedy fans, and legion admirers of both the actor and artist will find themselves smiling from cover to cover."
—Publishers Weekly, STARRED

Sample Cartoons From The Book 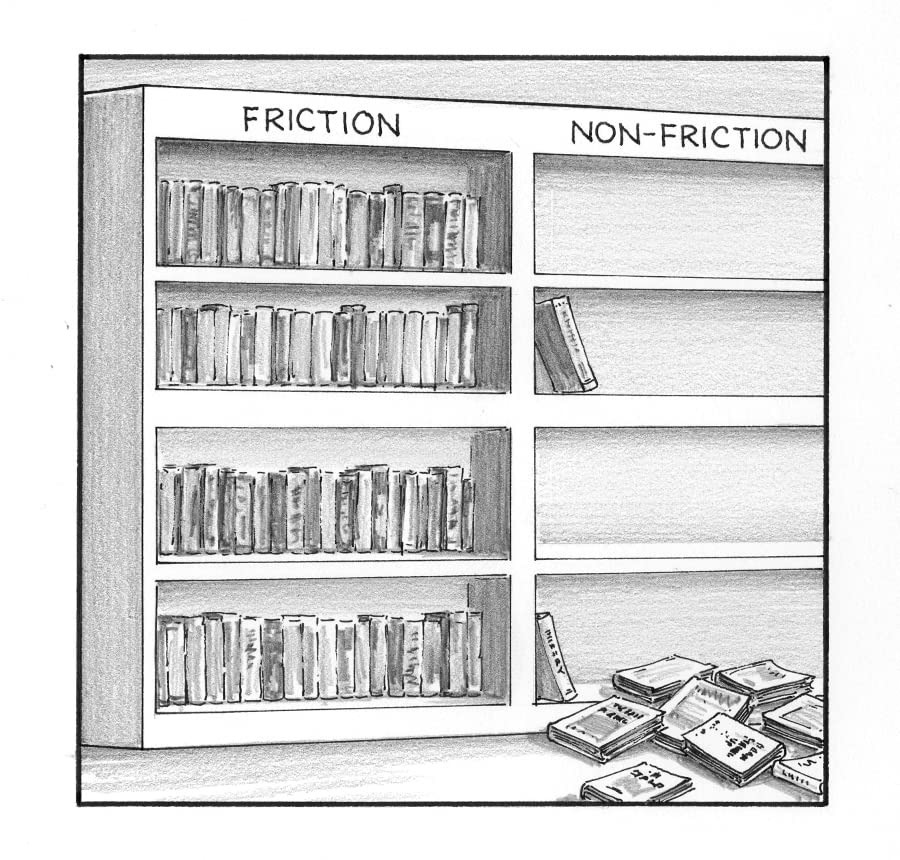 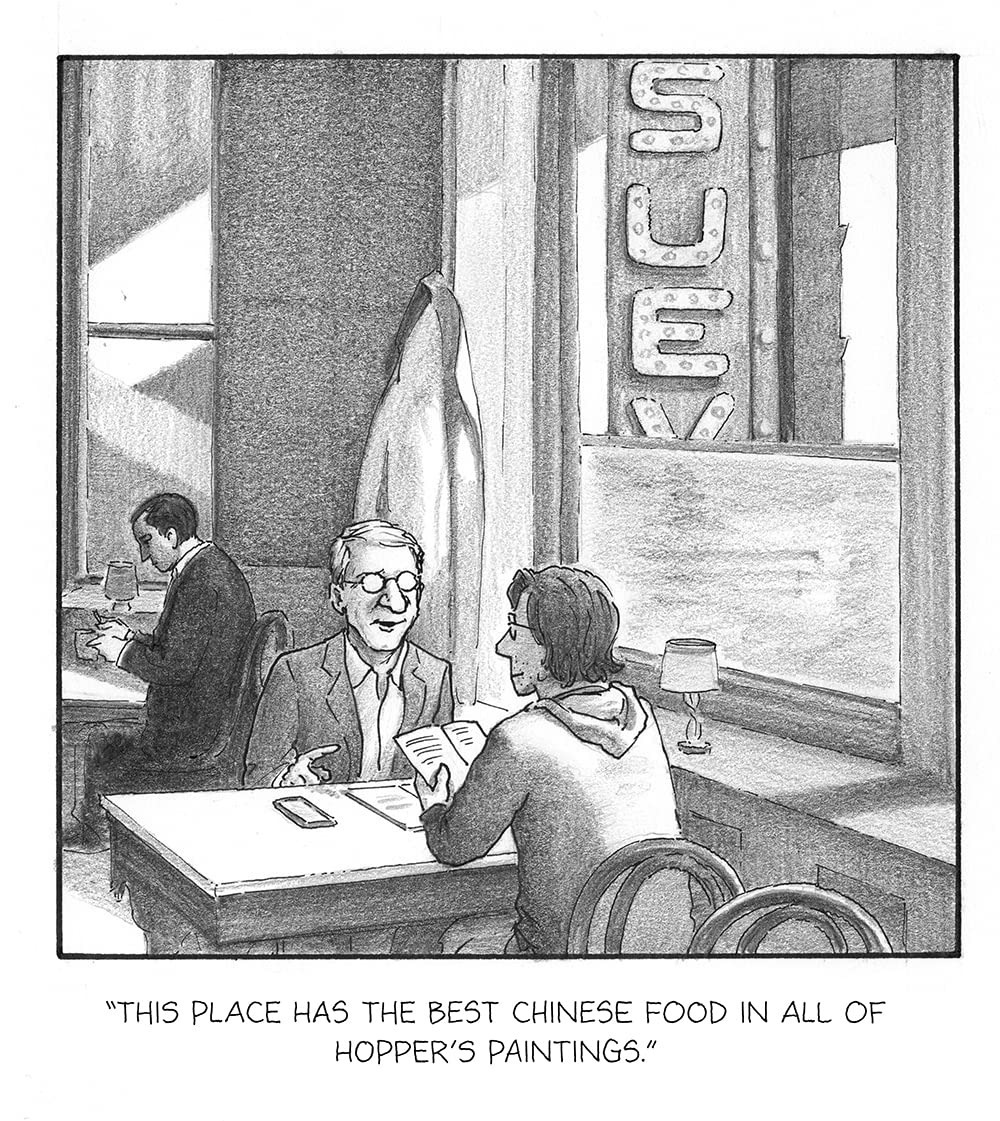 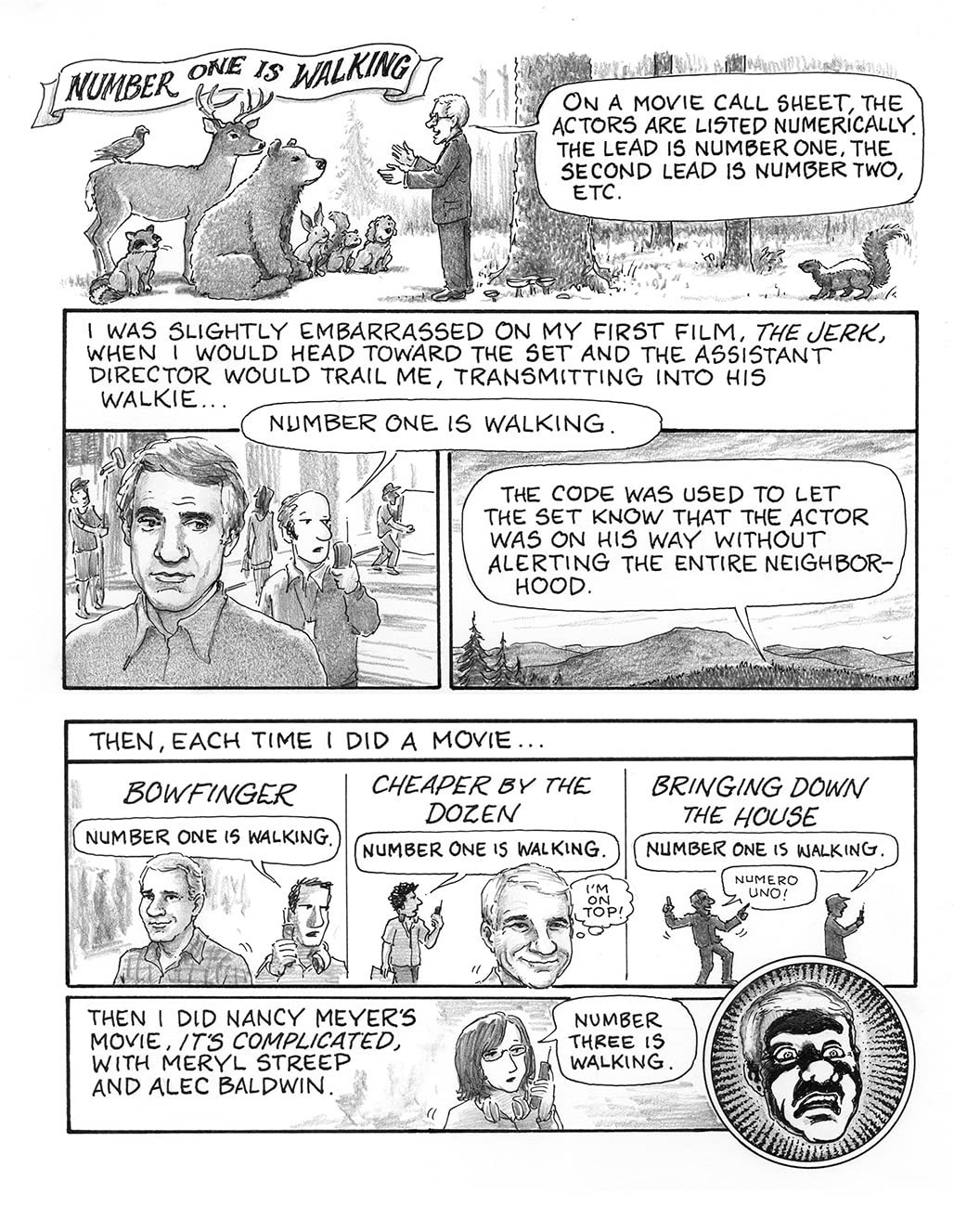 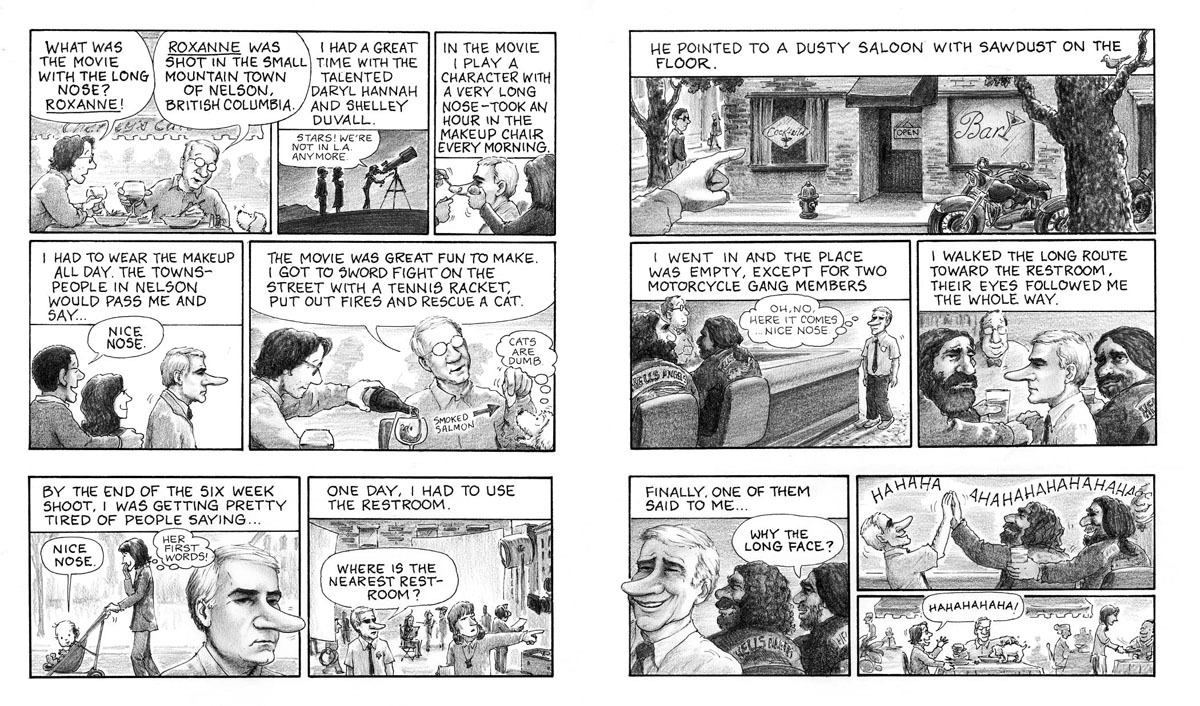 Very Fine Guaranteed. Sealed. A wonderful bright clean copy without any markings, writings, or stampings. No attached bookplates or indication of any removed. A well cared for book, protected from any potential damage. Square and tight spine. Sharp corners that are not bumped.