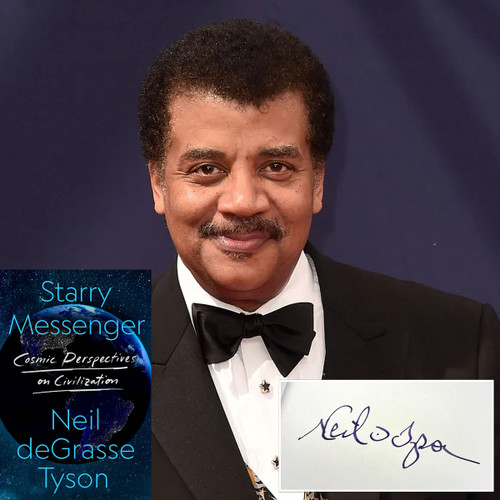 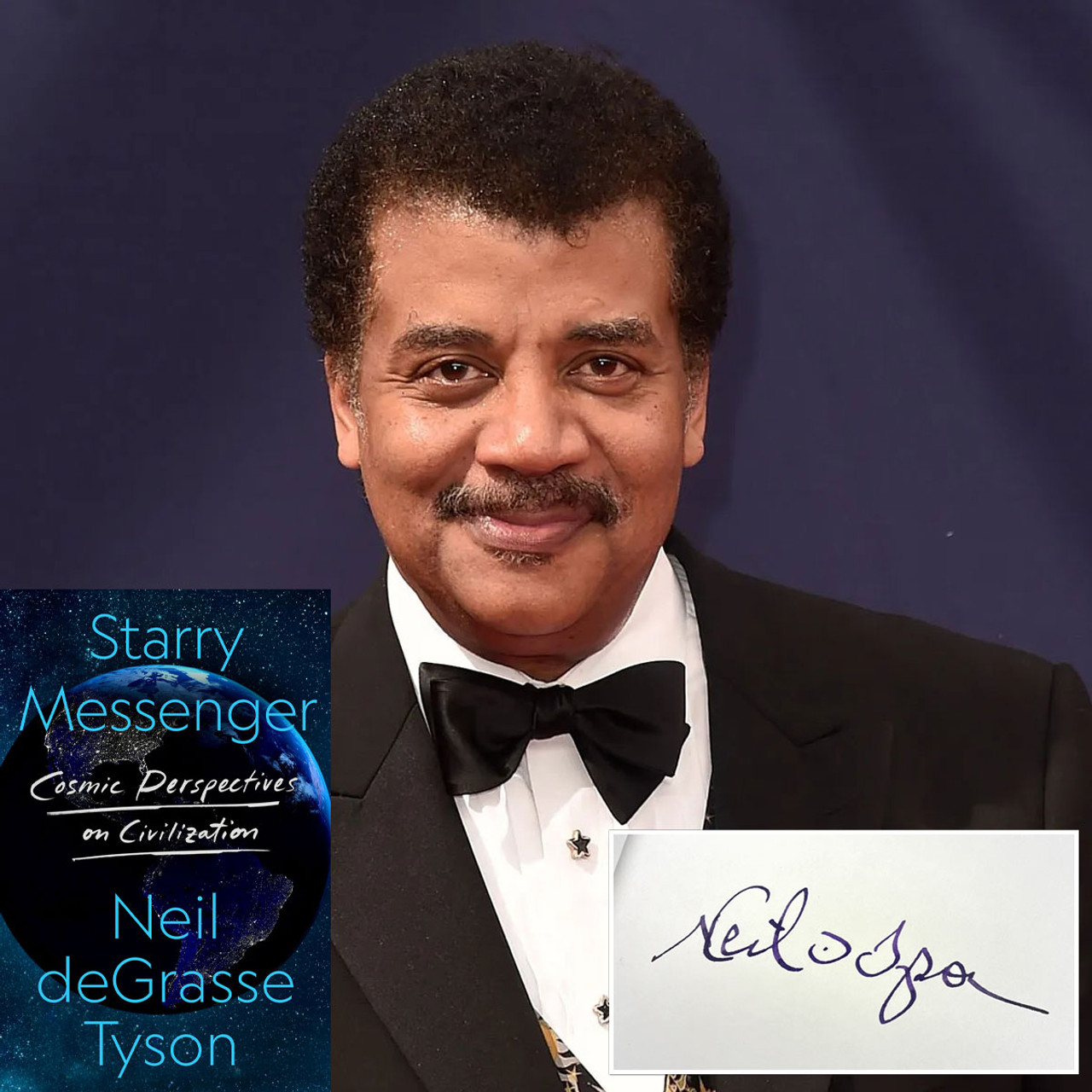 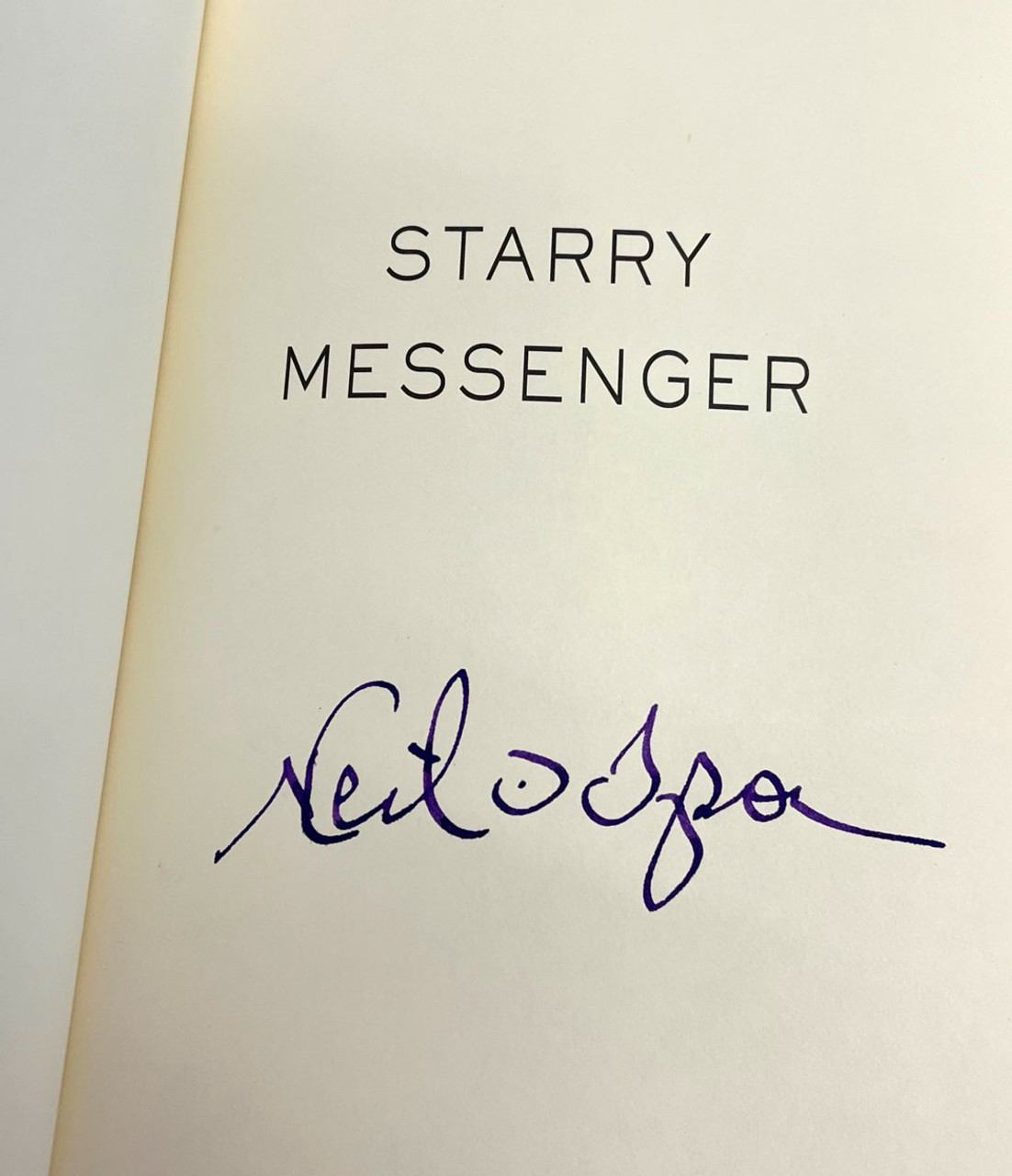 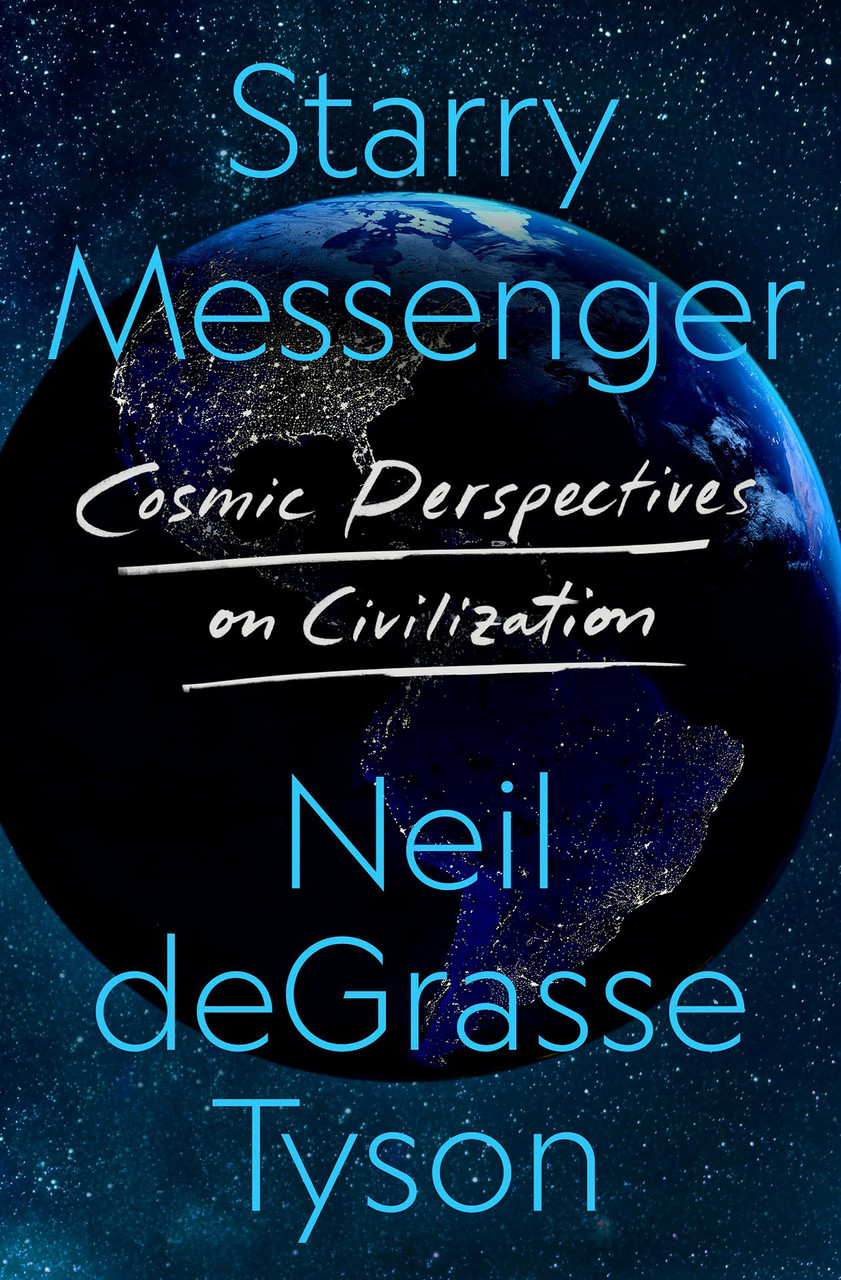 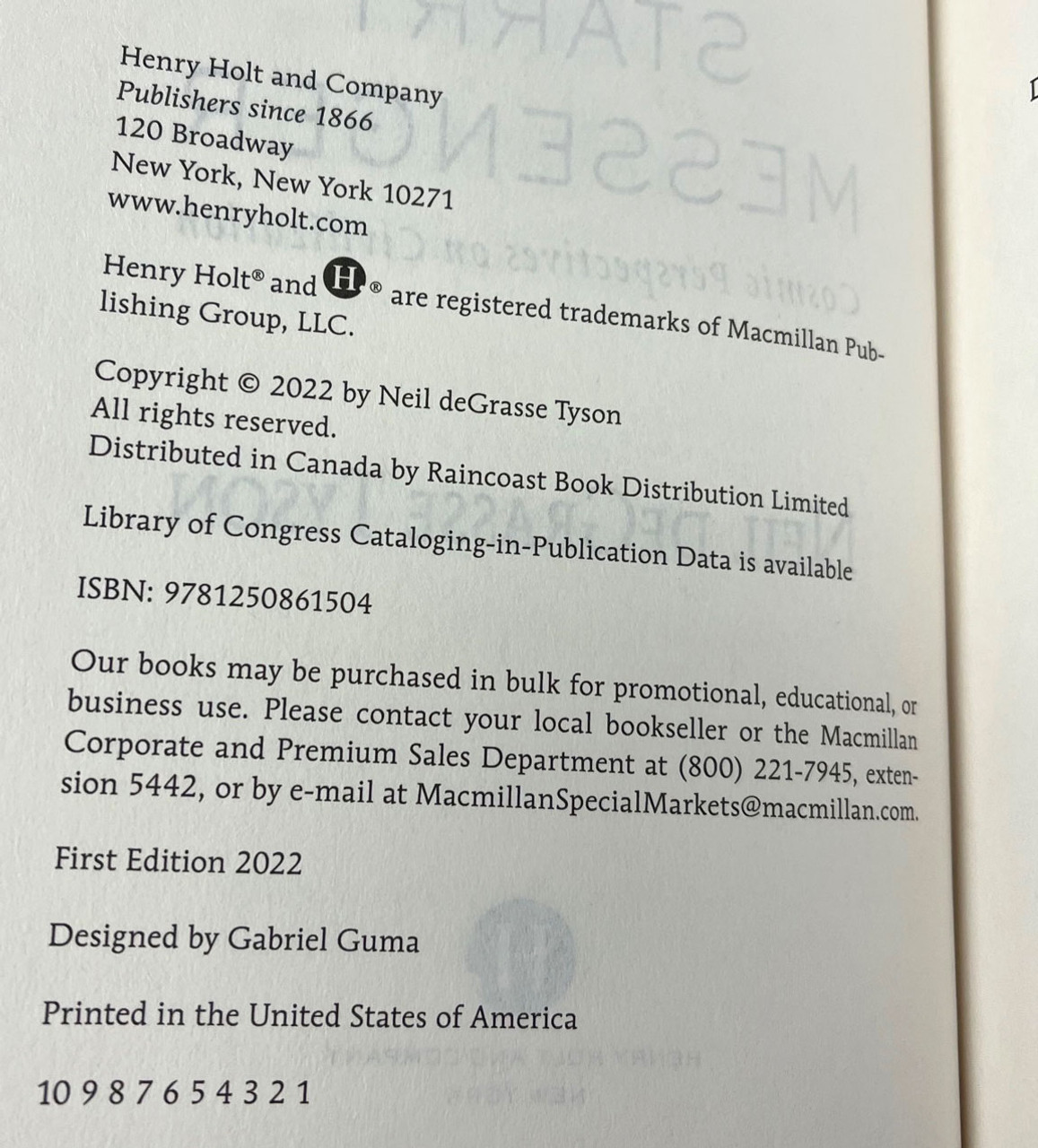 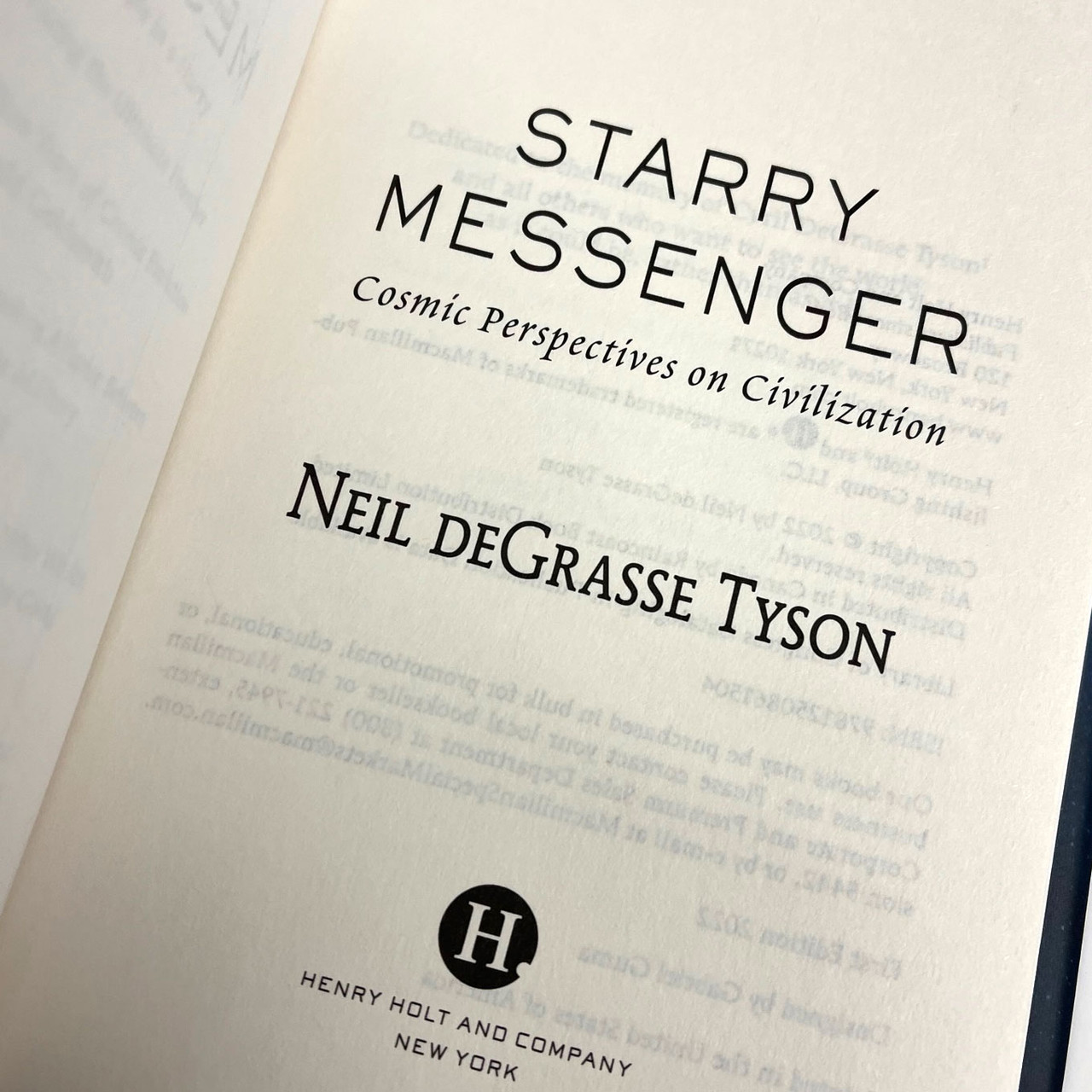 "This book has been gestating within me for decades...."

Limited to only 25 Signed First Edition slipcased copies with numbered COA, never to be offered again!

Henry Holt and Co. (September 20, 2022) Neil deGrasse Tyson "Starry Messenger: Cosmic Perspectives on Civilization". Personally signed by Neil deGrasse Tyson directly onto the title page. Signed First Edition, First Printing. Hardcover book with dust-jacket. This is a special slipcased edition of only 25 produced with a hand-numbered COA. The slipcase is produced from high quality materials and design to match the feel and look of the book. The author’s name and book title is printed on the front surface and spine. As new, sealed without any visible flaws.

Dr. Tyson is significant because he has played an important role in popularizing astrophysical concepts and discoveries. Tyson's professional research interests include star formation, exploding stars, dwarf galaxies, and the structure of the Milky Way.

Neil deGrasse Tyson is most famous for popularizing science with such books as The Pluto Files (2009) and through his frequent appearances on television as a talk show guest or hosting his series about science, Cosmos: A Spacetime Odyssey (2014).

The U.S. National Academy of Sciences awarded Tyson the Public Welfare Medal in 2015 for his "extraordinary role in exciting the public about the wonders of science". 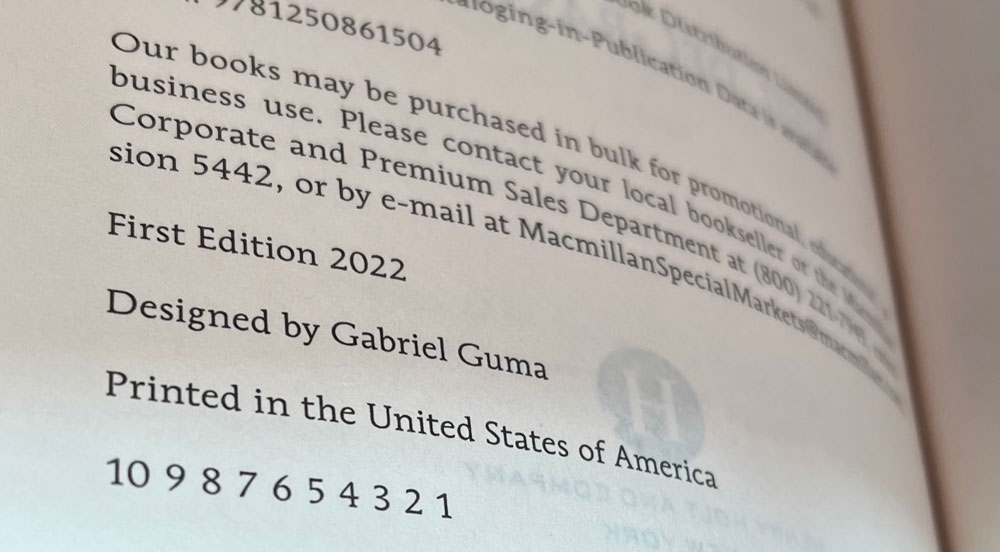 Bringing his cosmic perspective to civilization on Earth, Neil deGrasse Tyson shines new light on the crucial fault lines of our time―war, politics, religion, truth, beauty, gender, and race―in a way that stimulates a deeper sense of unity for us all.

In a time when our political and cultural views feel more polarized than ever, Tyson provides a much-needed antidote to so much of what divides us, while making a passionate case for the twin chariots of enlightenment―a cosmic perspective and the rationality of science.

After thinking deeply about how science sees the world and about Earth as a planet, the human brain has the capacity to reset and recalibrates life’s priorities, shaping the actions we might take in response. No outlook on culture, society, or civilization remains untouched.

With crystalline prose, Starry Messenger walks us through the scientific palette that sees and paints the world differently. From insights on resolving global conflict to reminders of how precious it is to be alive, Tyson reveals, with warmth and eloquence, an array of brilliant and beautiful truths that apply to us all, informed and enlightened by knowledge of our place in the universe.

“Every page is lit up by an original poetic imagination but bearing the unmistakable stamp of a rational mind, steeped in maths and science.”
―Richard Dawkins, author of The Selfish Gene and The God Delusion

Neil deGrasse Tyson is an American astrophysicist, author, and science communicator. Tyson studied at Harvard University, the University of Texas at Austin, and Columbia University. From 1991 to 1994, he was a postdoctoral research associate at Princeton University. In 1994, he joined the Hayden Planetarium as a staff scientist and the Princeton faculty as a visiting research scientist and lecturer. In 1996, he became director of the planetarium and oversaw its $210 million reconstruction project, which was completed in 2000. Since 1996, he has been the director of the Hayden Planetarium at the Rose Center for Earth and Space in New York City. The center is part of the American Museum of Natural History, where Tyson founded the Department of Astrophysics in 1997 and has been a research associate in the department since 2003.

From 1995 to 2005, Tyson wrote monthly essays in the "Universe" column for Natural History magazine, some of which were later published in his books Death by Black Hole (2007) and Astrophysics for People in a Hurry (2017). During the same period, he wrote a monthly column in StarDate magazine, answering questions about the universe under the pen name "Merlin". Material from the column appeared in his books Merlin's Tour of the Universe (1998) and Just Visiting This Planet (1998). Tyson served on a 2001 government commission on the future of the U.S. aerospace industry and on the 2004 Moon, Mars and Beyond commission. He was awarded the NASA Distinguished Public Service Medal in the same year. From 2006 to 2011, he hosted the television show NOVA ScienceNow on PBS. Since 2009, Tyson has hosted the weekly podcast StarTalk. A spin-off, also called StarTalk, began airing on National Geographic in 2015. In 2014, he hosted the television series Cosmos: A Spacetime Odyssey, a successor to Carl Sagan's 1980 series Cosmos: A Personal Voyage.

The U.S. National Academy of Sciences awarded Tyson the Public Welfare Medal in 2015 for his "extraordinary role in exciting the public about the wonders of science". 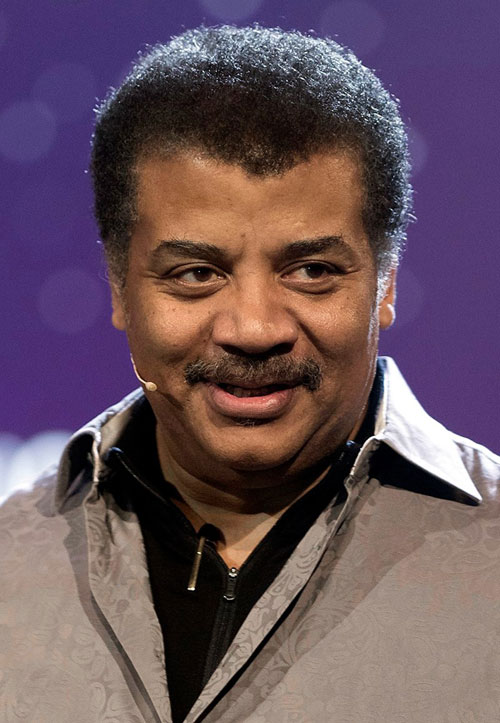 Preface from the book:

Starry Messenger is a wake-up call to civilization. People no longer know who or what to trust. We sow hatred of others fueled by what we think is true, or what we want to be true, without regard to what is true. Cultural and political factions battle for the souls of communities and of nations. We’ve lost all sight of what distinguishes facts from opinions. We lob grenades at one another when we could be sharing beers in pubs.

When Galileo Galilei published Sidereus Nuncius in 1610, he brought to Earth cosmic truths that had been waiting since antiquity to descend upon human thought. Galileo’s freshly perfected telescope revealed a universe unlike anything people presumed to be true. Unlike anything people wanted to be true. Unlike anything people dared say was true. Sidereus Nuncius contained his observations of the Sun, Moon, and stars, as well as the planets and the Milky Way. Two fast takeaways from his book: (1) human eyes alone are insufficient to reveal fundamental truths about the operations of nature, (2) Earth is not the center of all motion. It orbits the Sun as just one among the other known planets.

"Sidereus Nuncius" translates from the Latin to "Starry Messenger".

These first-ever cosmic perspectives in our world were ego checks on our self-importance—messages from the stars forcing people to rethink our relationships to one another, to Earth, and to the cosmos. We otherwise risk believing the world revolves around us and our opinions. As an antidote, Starry Messenger offers ways to allocate our emotional and intellectual energies that reconcile with the biology, chemistry, and physics of the known universe. Starry Messenger recasts some of the most discussed and debated topics of our times—war, politics, religion, truth, beauty, gender, race—each an artificial battlefield on the landscape of life, and returns them to the reader in ways that foster accountability and wisdom in the service of civilization. I also intermittently explore how we might appear to space aliens who arrive on Earth with no preconceived notions of who or what we are—or how we should be. They serve as impartial observers of our mysterious ways, as they highlight inconsistencies, hypocrisies, and occasional idiocies in our lives.

Think of Starry Messenger as a trove of insights, informed by the universe and brought to you by the methods and tools of science.

Very Fine Guaranteed. Sealed. A wonderful bright clean copy without any markings, writings, or stampings. No attached bookplates or indication of any removed. A well cared for book, protected from any potential damage. Square and tight spine. Sharp corners that are not bumped. The dust-jacket is protected in a new archival acid-free Mylar sleeve.

Personally signed by Steve Martin, one of the most well-known talents in entertainment Limited to only 50 Signed First Edition slipcased copies with numbered COA, never to be offered again!