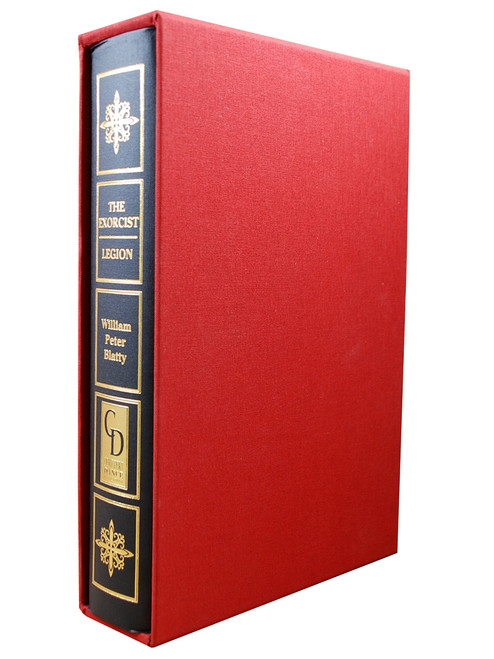 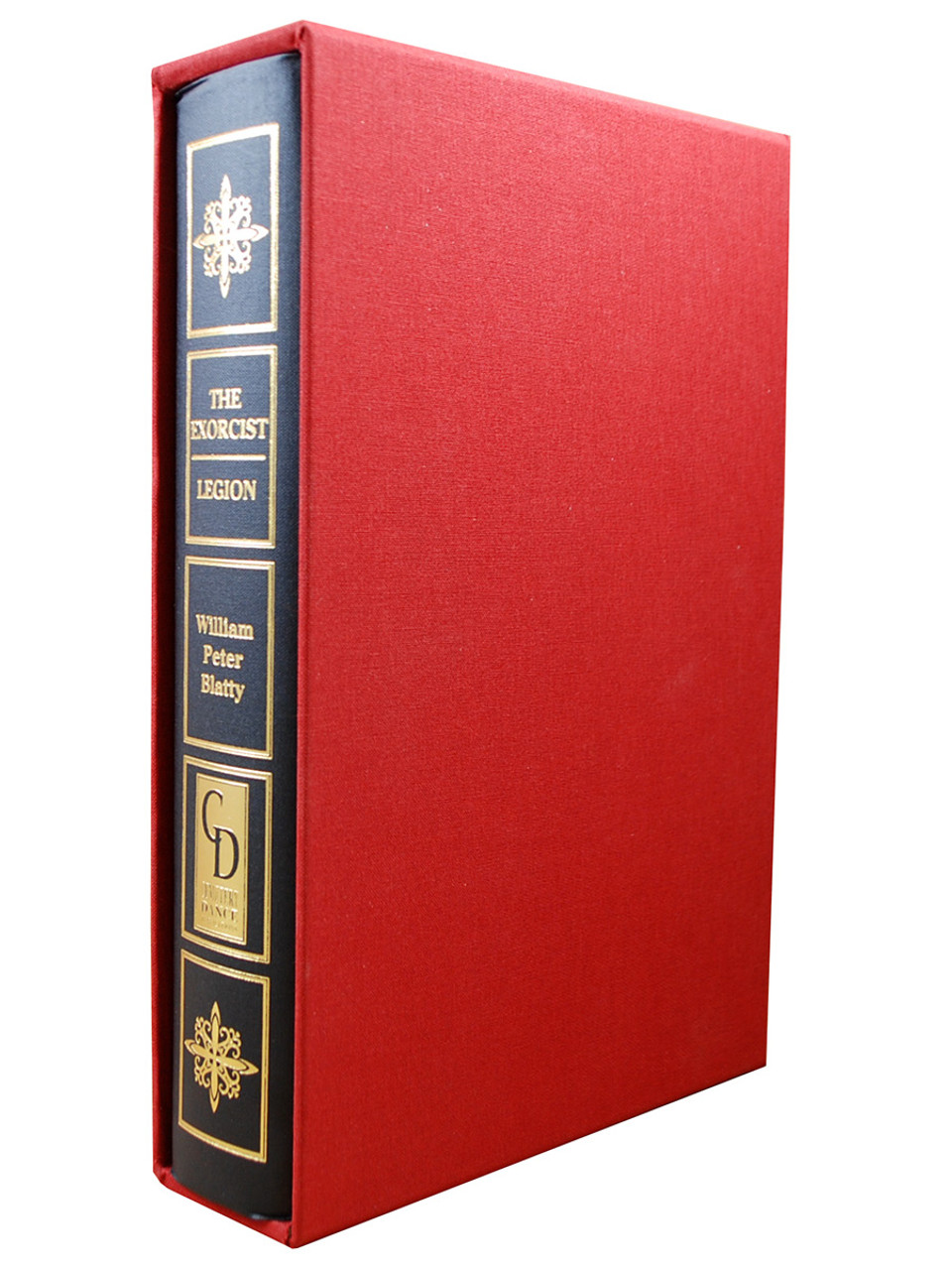 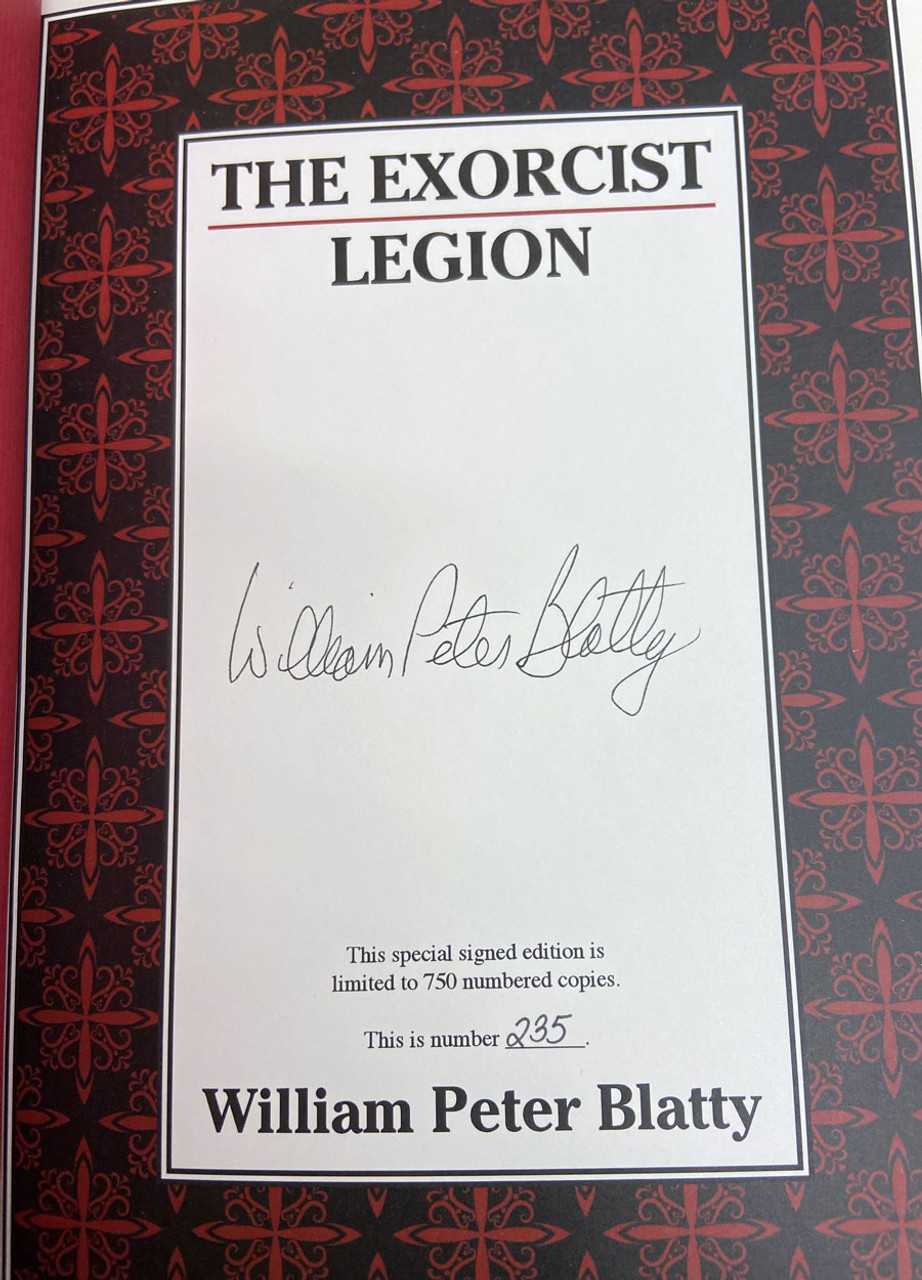 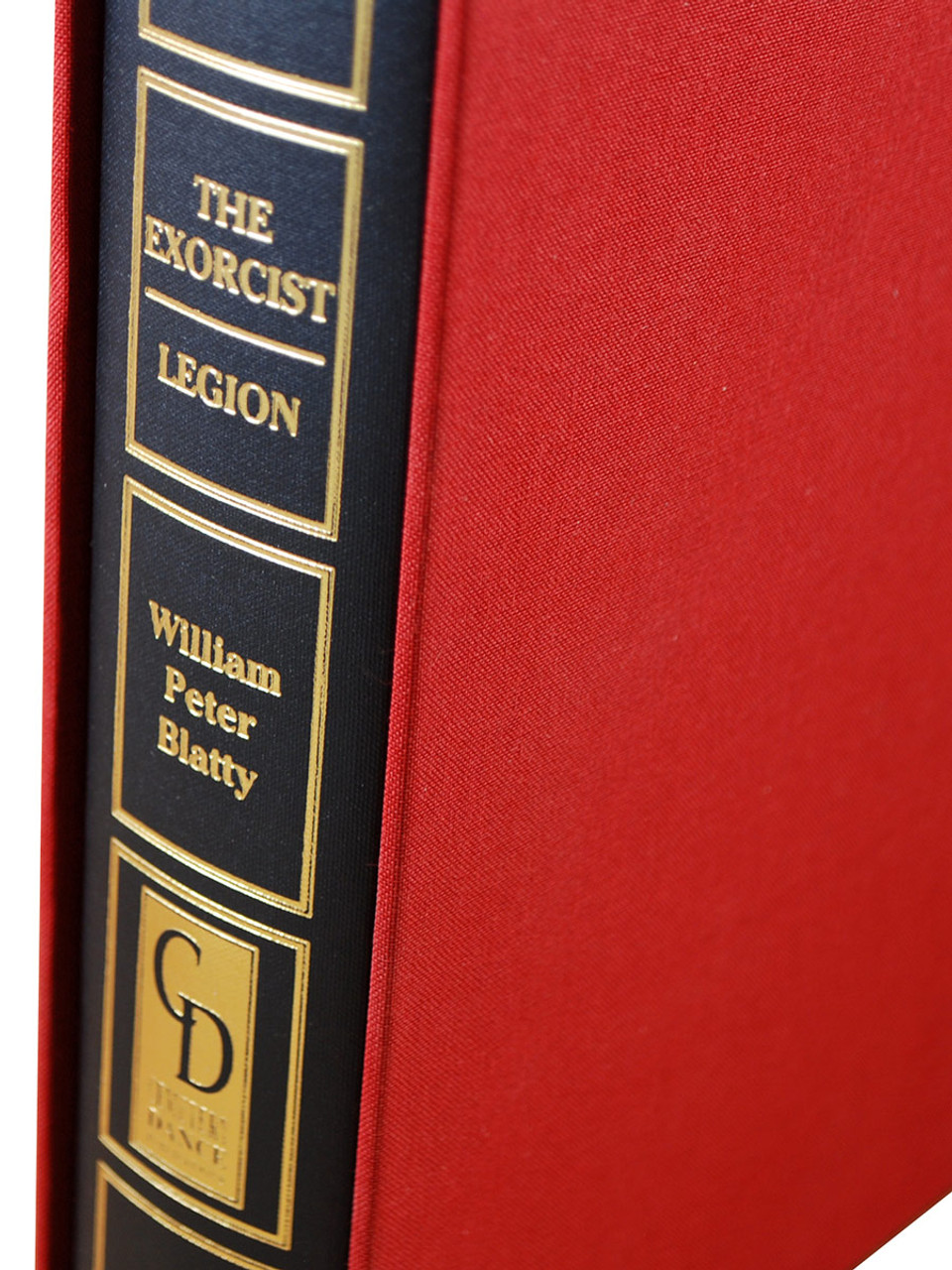 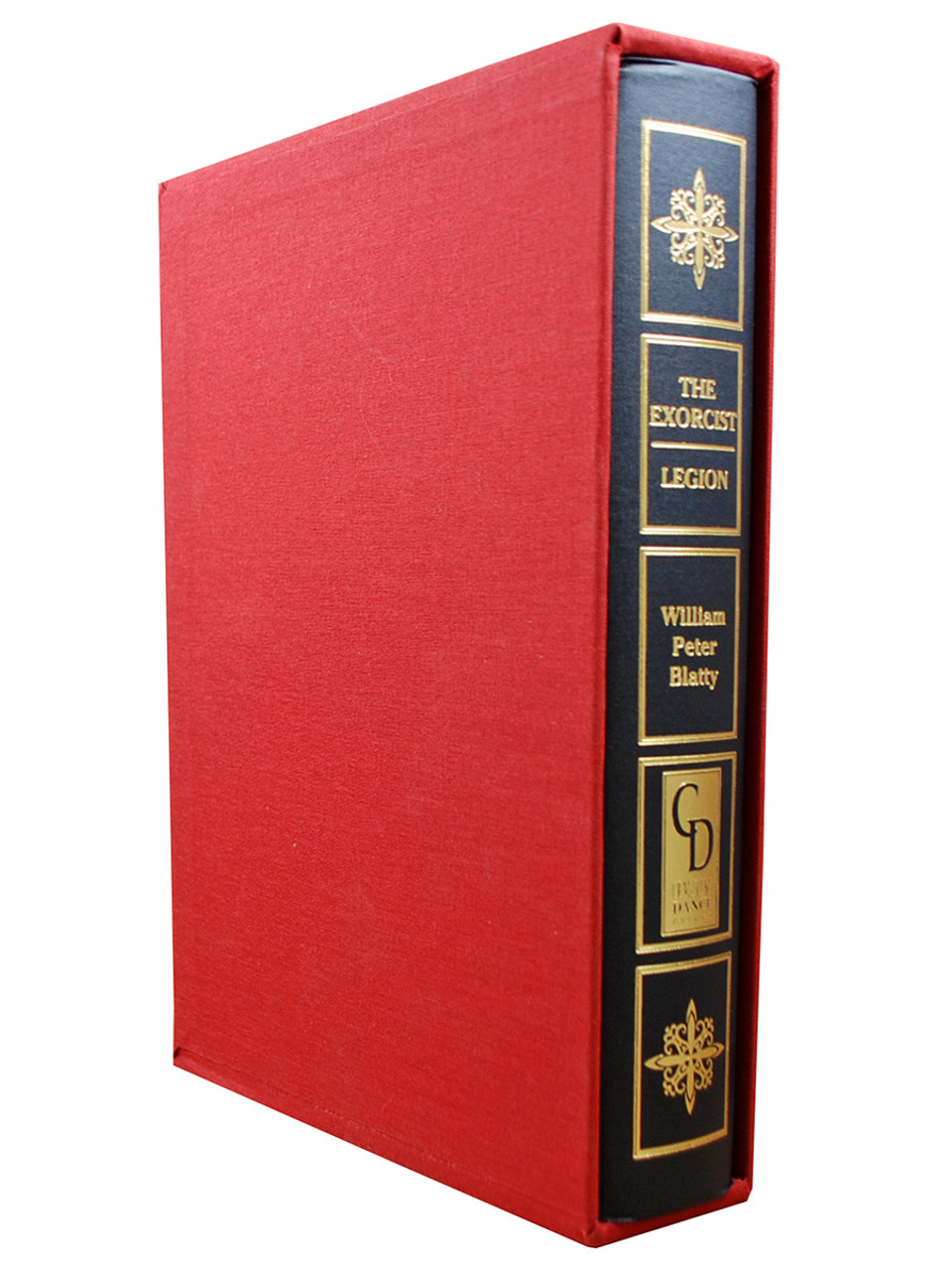 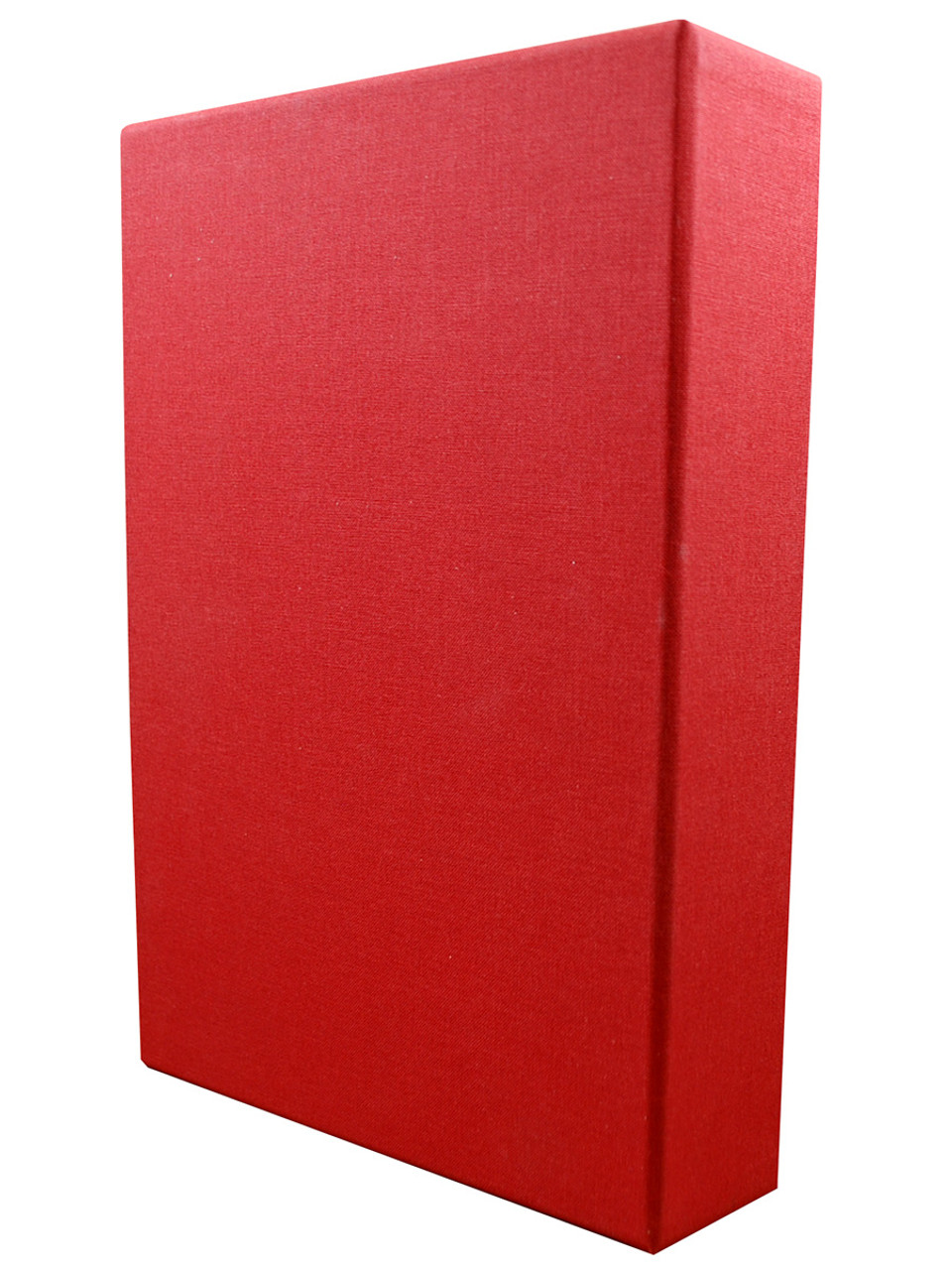 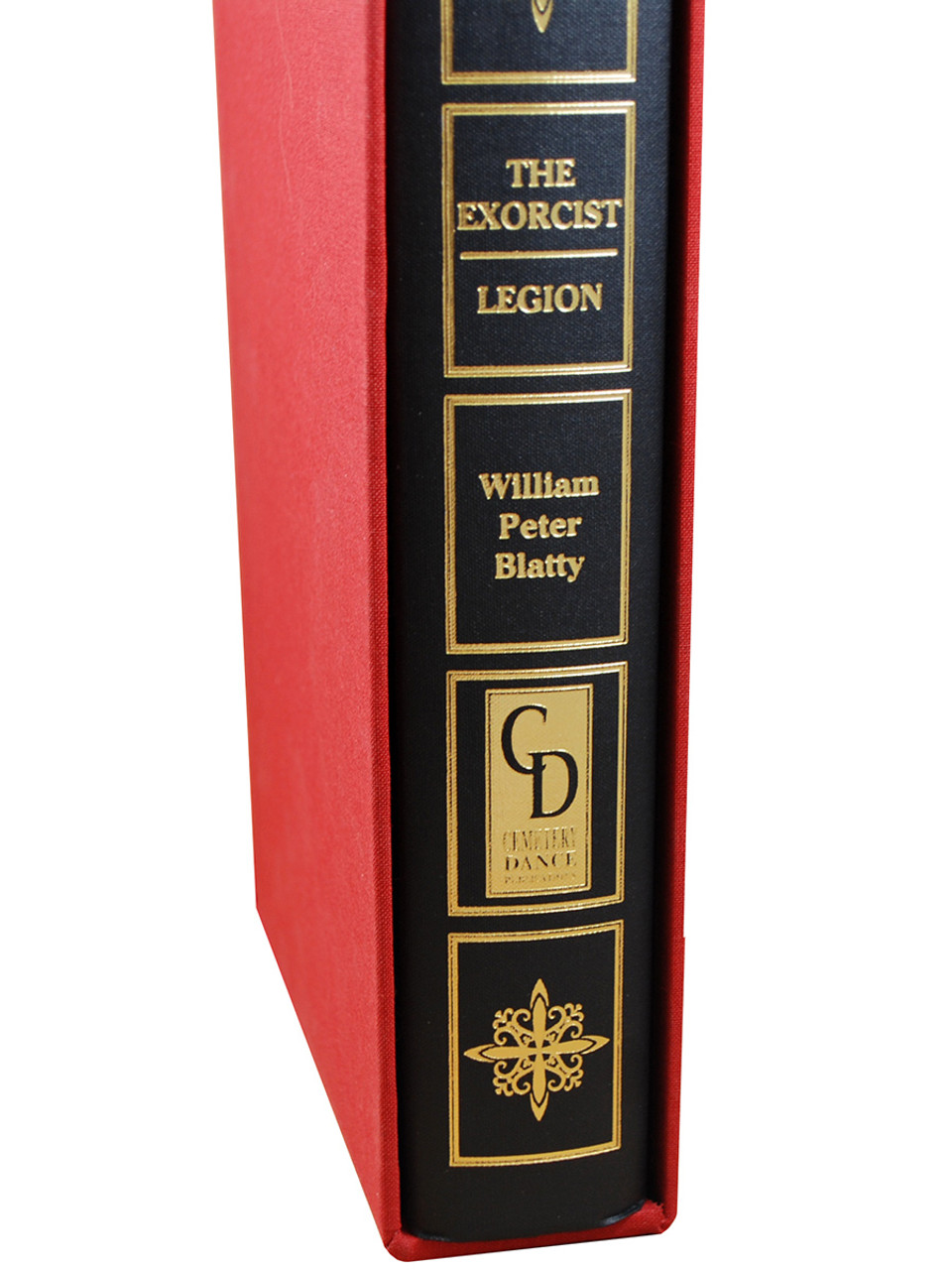 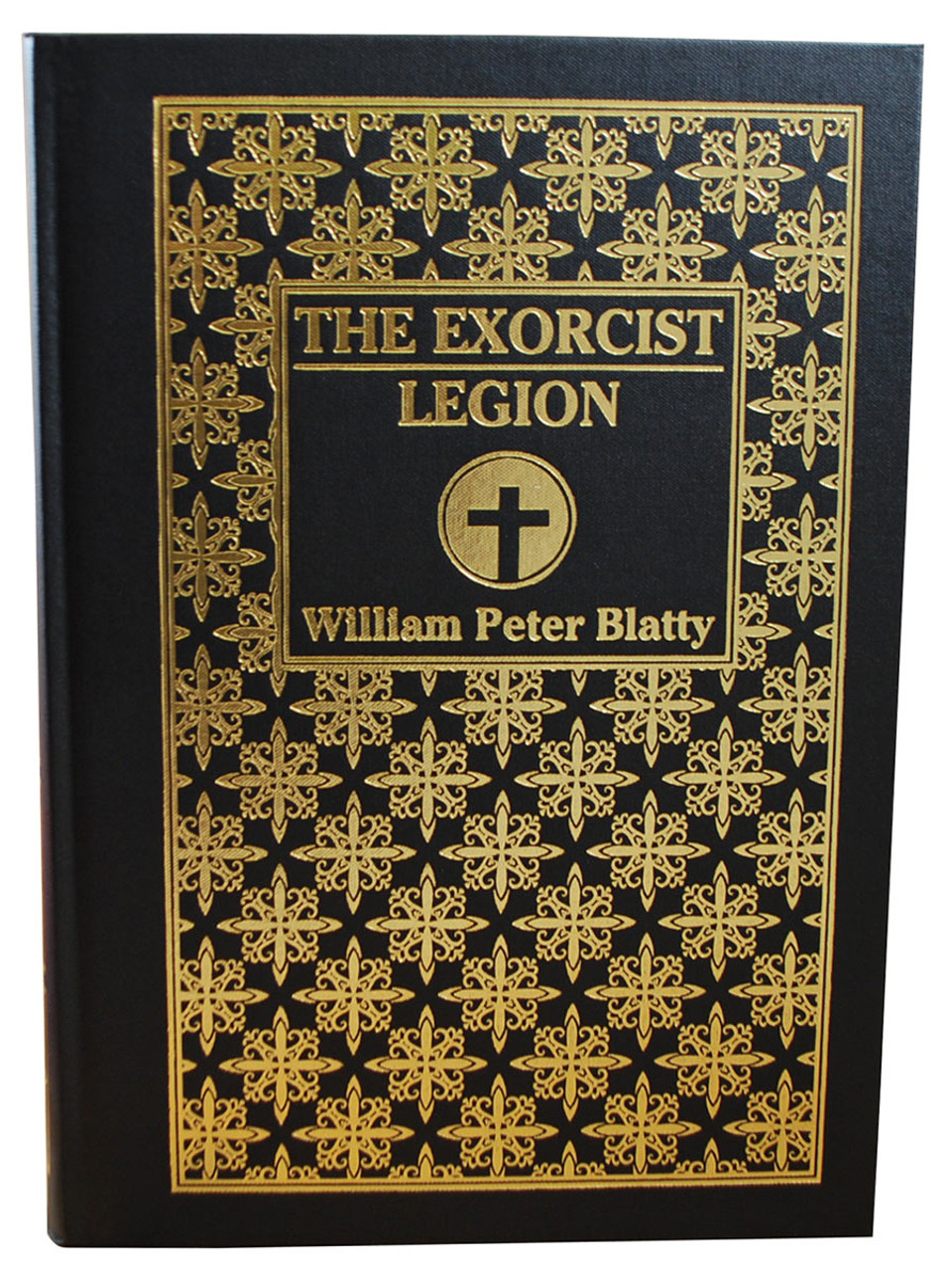 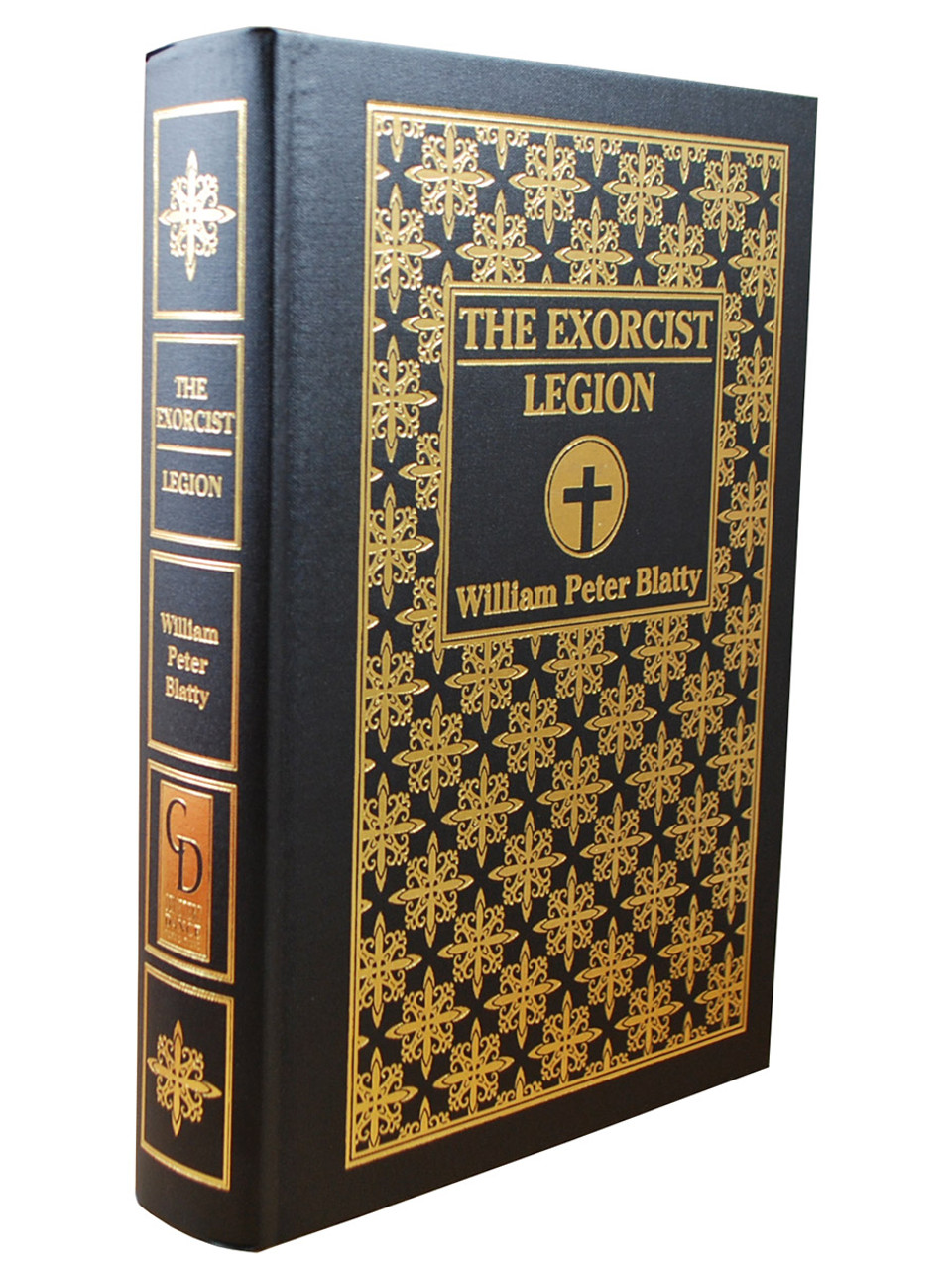 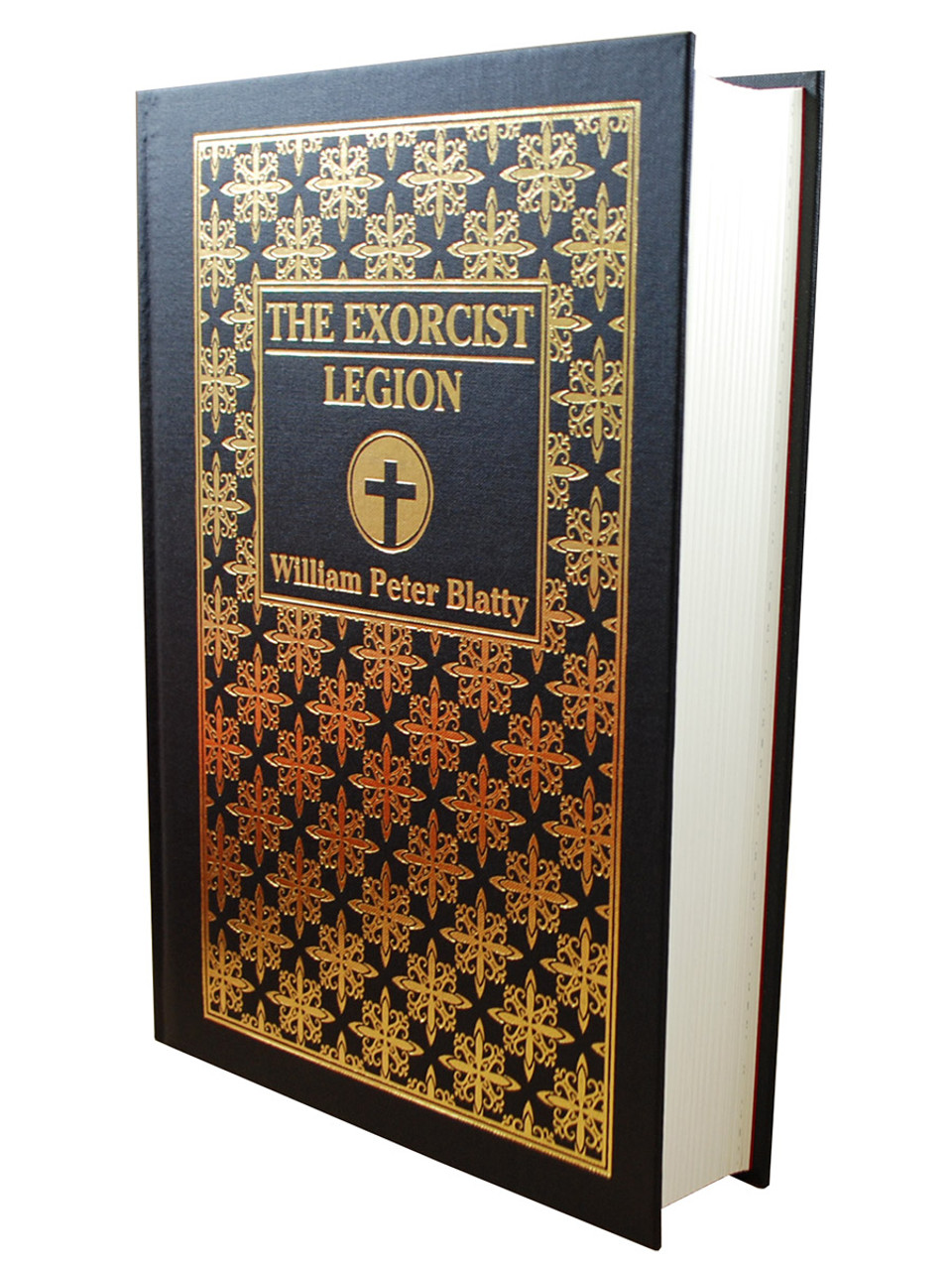 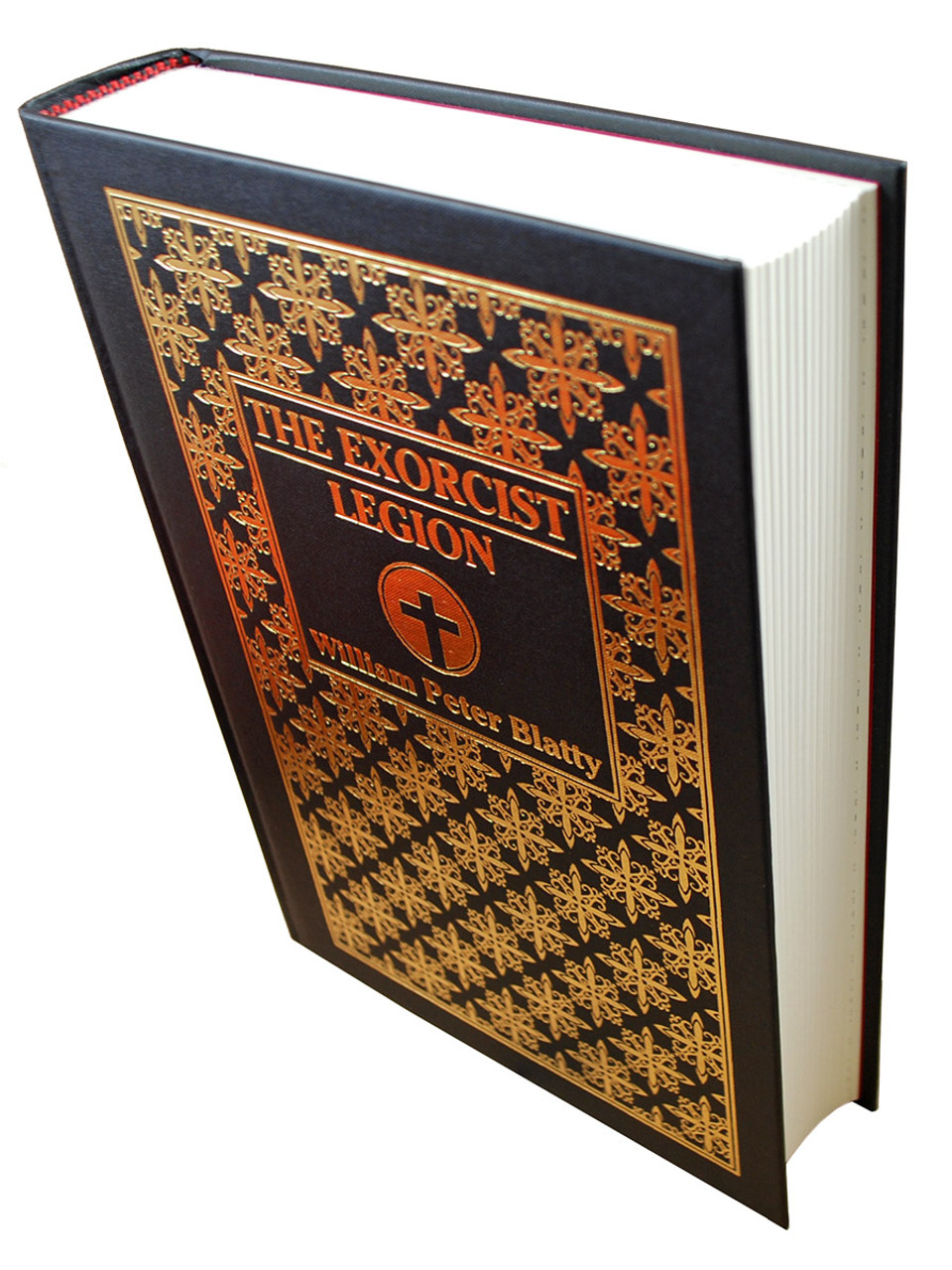 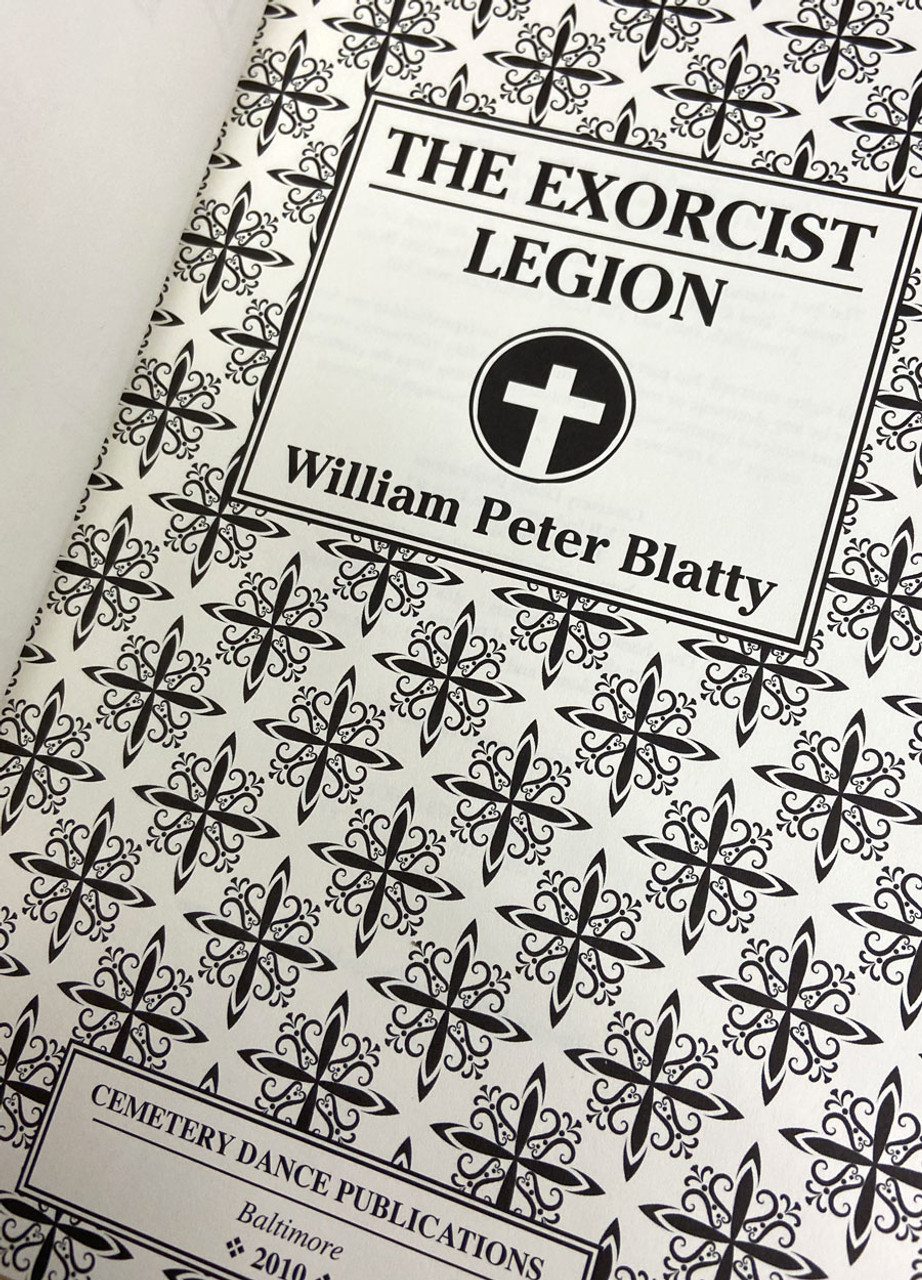 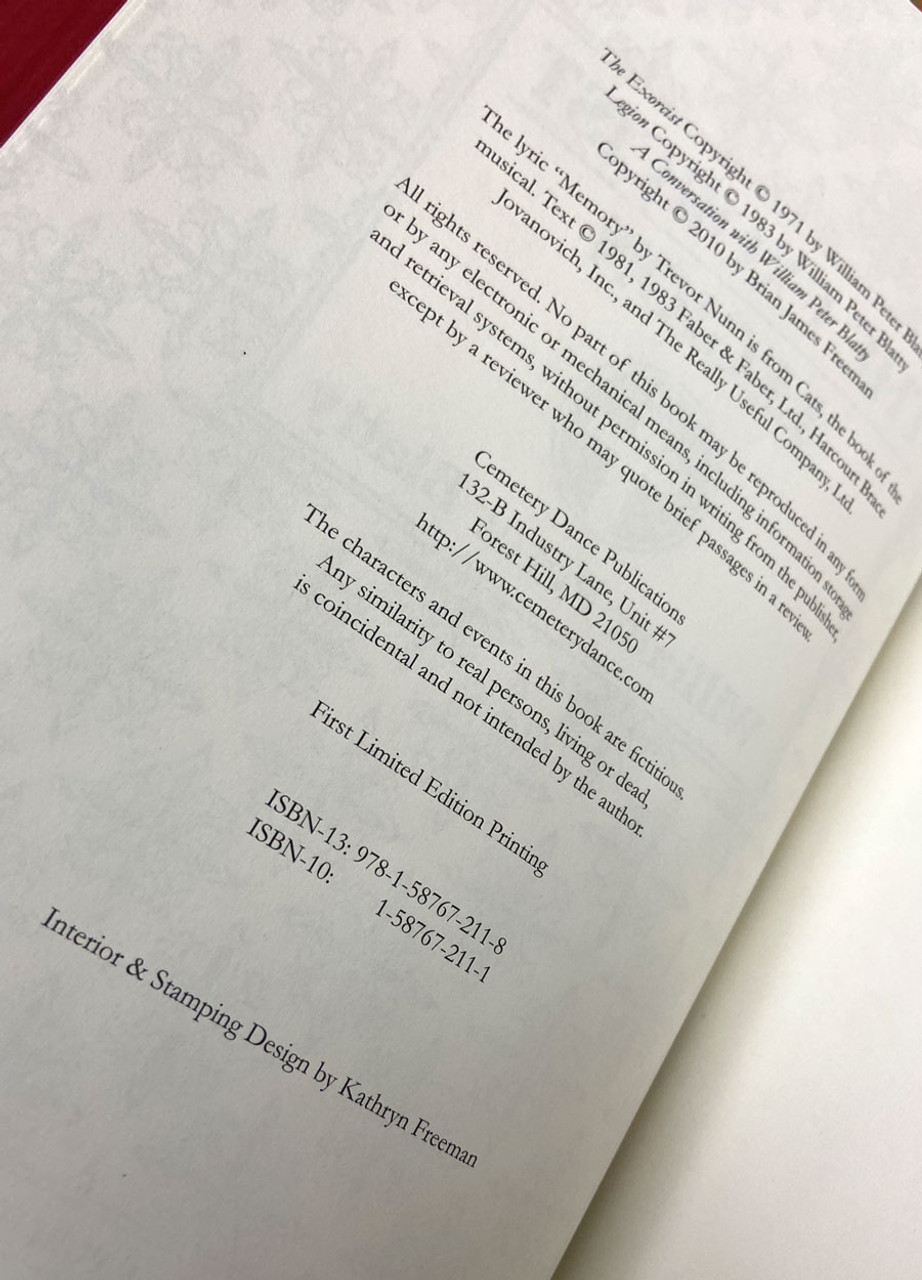 Cemetery Dance Publications 2010. "The Exorcist" and "Legion" Special Signed Edition by William Peter Blatty. Interior artwork by Keith Minnion. This is the slipcased signed first limited edition printing. Number 235 of 750. As New without any flaws. Unread book with square and tight spine. No dust-jacket as issued. A deluxe over-sized hardcover edition. Photos of actual item.

A Note For Collectors:

The signed Limited Edition and Lettered Edition both sold out pre-publication.

About this Special Edition

Featuring two classic William Peter Blatty novels in one beautiful volume for the first-time ever, this oversized deluxe special edition will be a must-have for any collector of horror! This incredible collector's edition also includes original B&W artwork by acclaimed artist Keith Minnion and a career spanning interview conducted by Cemetery Dance Managing Editor Brian James Freeman, covering Blatty's life and career from the 1950s to the present. Both the Limited Edition and the Lettered Edition are signed by William Peter Blatty and there are no plans at this time to publish a trade edition of this special volume.

This edition was published in two states: 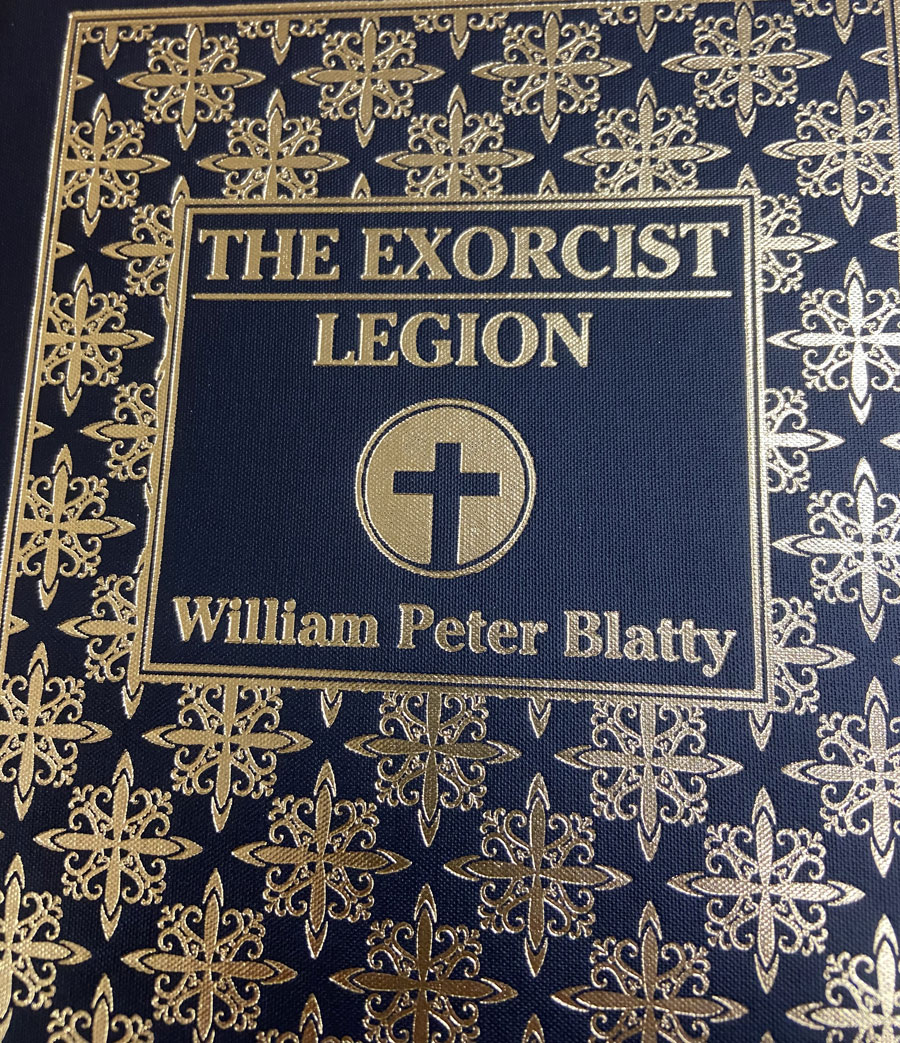 A Note From the Author:

"I have for many years envisioned The Exorcist and Legion to be one continuous read, even though the former is a fact-based, clearly 'religious thriller,' while the story of Legion delivers more excitingly on the level of a pure 'entertain-ment.' Never-the-less, it is Legion and not The Exorcist that is by far the more ambitious work in that the demonic homicides that police Lt. Kinderman is investigating are of much lesser concern to him than solving that case of cosmic homicide that for eons, and for so many and for so long, has been the foremost stumbling block to belief in a benevolent Creator, namely the so-called 'Problem of Evil,' to which Legion brazenly offers a solution."

Originally published in 1971, The Exorcist is now a major television series on FOX. It remains one of the most controversial novels ever written and went on to become a literary phenomenon: It spent fifty-seven weeks on the New York Times bestseller list, seventeen consecutively at number one. Inspired by a true story of a child’s demonic possession in the 1940s, William Peter Blatty created an iconic novel that focuses on Regan, the eleven-year-old daughter of a movie actress residing in Washington, D.C. A small group of overwhelmed yet determined individuals must rescue Regan from her unspeakable fate, and the drama that ensues is gripping and unfailingly terrifying.

Two years after its publication, The Exorcist was, of course, turned into a wildly popular motion picture, garnering ten Academy Award nominations. On opening day of the film, lines of the novel’s fans stretched around city blocks. In Chicago, frustrated moviegoers used a battering ram to gain entry through the double side doors of a theater. In Kansas City, police used tear gas to disperse an impatient crowd who tried to force their way into a cinema. The three major television networks carried footage of these events; CBS’s Walter Cronkite devoted almost ten minutes to the story. The Exorcist was, and is, more than just a novel and a film: it is a true landmark.

Purposefully raw and profane, The Exorcist still has the extraordinary ability to disturb readers and cause them to forget that it is “just a story.” Published here in this beautiful fortieth anniversary edition, it remains an unforgettable reading experience and will continue to shock and frighten a new generation of readers.

From the author of The Exorcist -- Legion, a classic tale of horror, is back in print!

A young boy is found horribly murdered in a mock crucifixion. Is the murderer the elderly woman who witnessed the crime? A neurologist who can no longer bear the pain life inflicts on its victims? A psychiatrist with a macabre sense of humor and a guilty secret? A mysterious mental patient, locked in silent isolation?

Lieutenant Kinderman follows a bewildering trail that links all these people, confronting a new enigma at every turn even as more murders surface. Why does each victim suffer the same dreadful mutilations? Why are two of the victims priests? Is there a connection between these crimes and another series of murders that took place twelve years ago―and supposedly ended with the death of the killer?

Legion is a novel of breathtaking energy and suspense. But more than this, it is an extraordinary journey into the uncharted depths of the human mind and the most agonizing questions of the human condition.

The answers are revealed in a climax so stunning that it could only have been written by the author of The Exorcist―William Peter Blatty.

"Read the book! It's an experience you will never forget." — St. Louis Post-Dispatch

"There are not many readers who will be unmoved." — The New York Times Book Review

"I devoured Legion in one terrified gulp. Infinitely more suspenseful than The Exorcist, it even manages to outspook it." — Los Angeles Times

"Ten times better than The Exorcist…The suspense is breathtaking, and the ideas dark, deadly and fascinating." — Cleveland Plain Dealer

"Blatty has returned to repossess us!" — New York Daily News

"Heartbeat-skipping horror. Read Legion only on a sunny day." — Cosmopolitan

"Mesmerizing and horrifying at the same time." — USA Today

VERY FINE GUARANTEED.The condition is of the highest quality without any flaws. It is free of any marks, writings, or stamps. There is no bookplate attached or indication of any removed. A wonderful bright clean copy in As New slipcase.