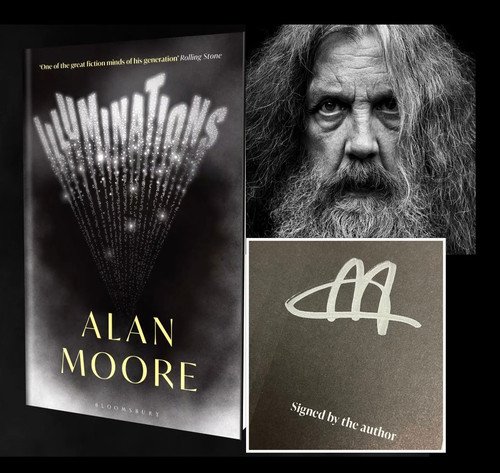 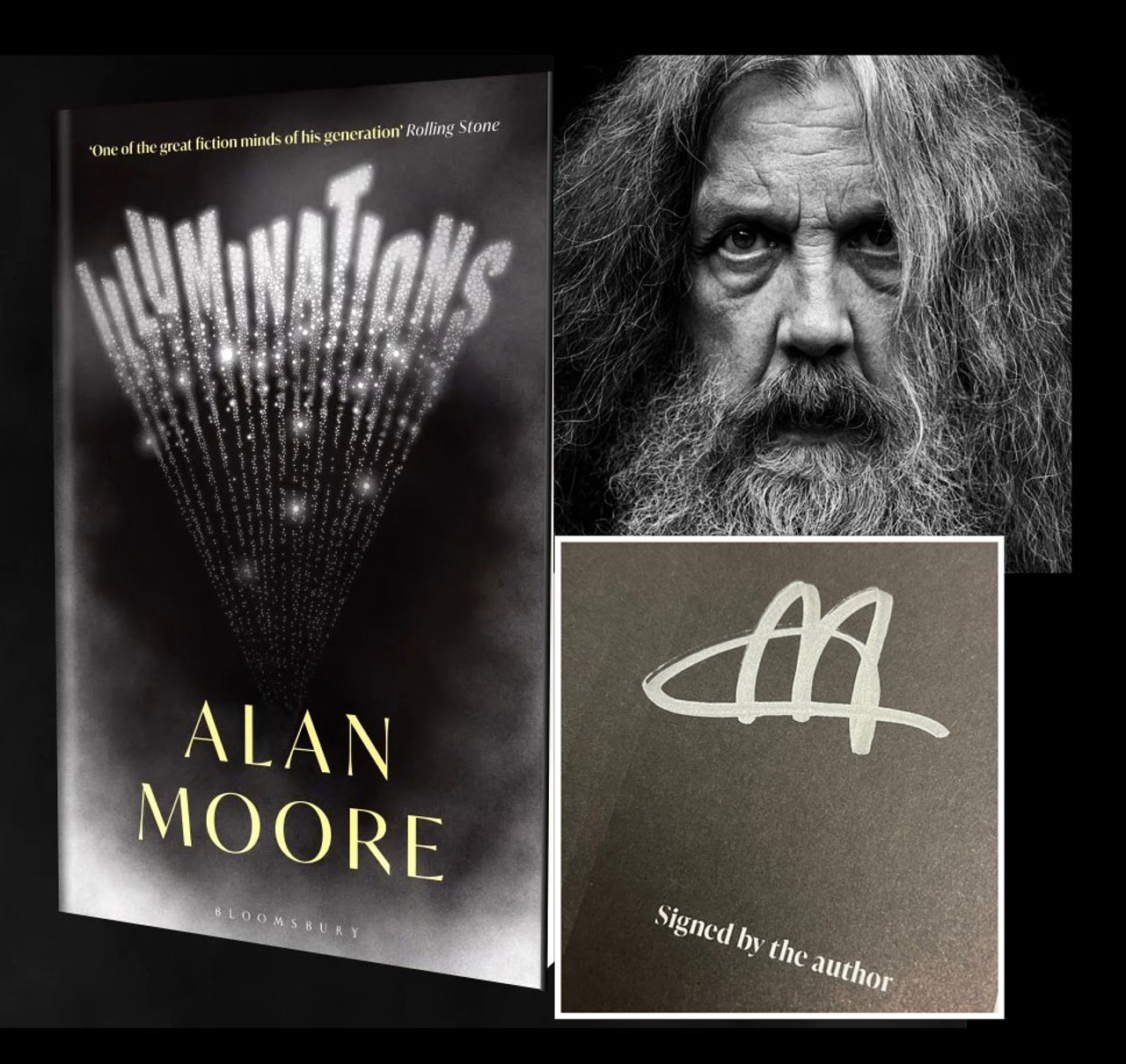 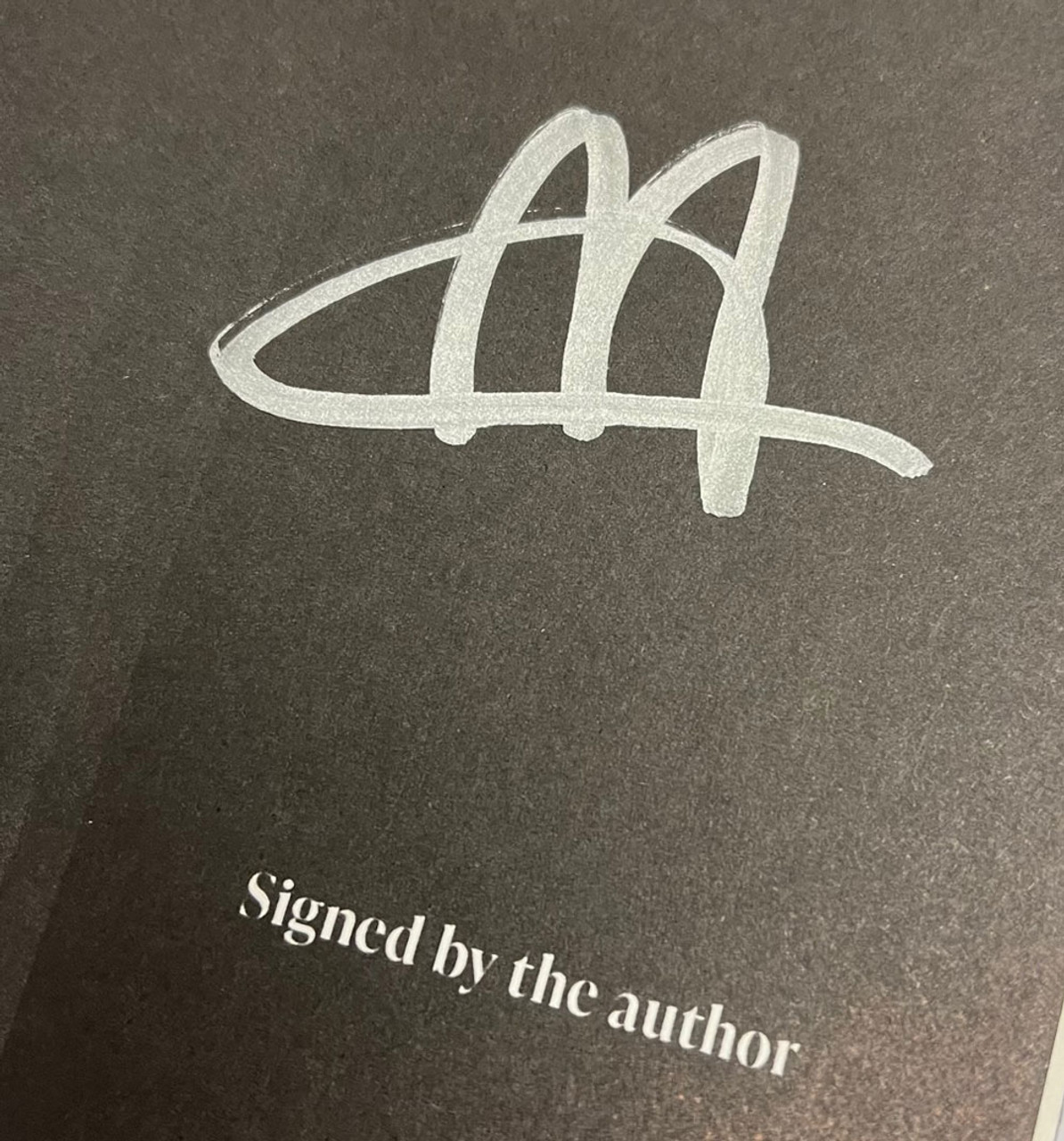 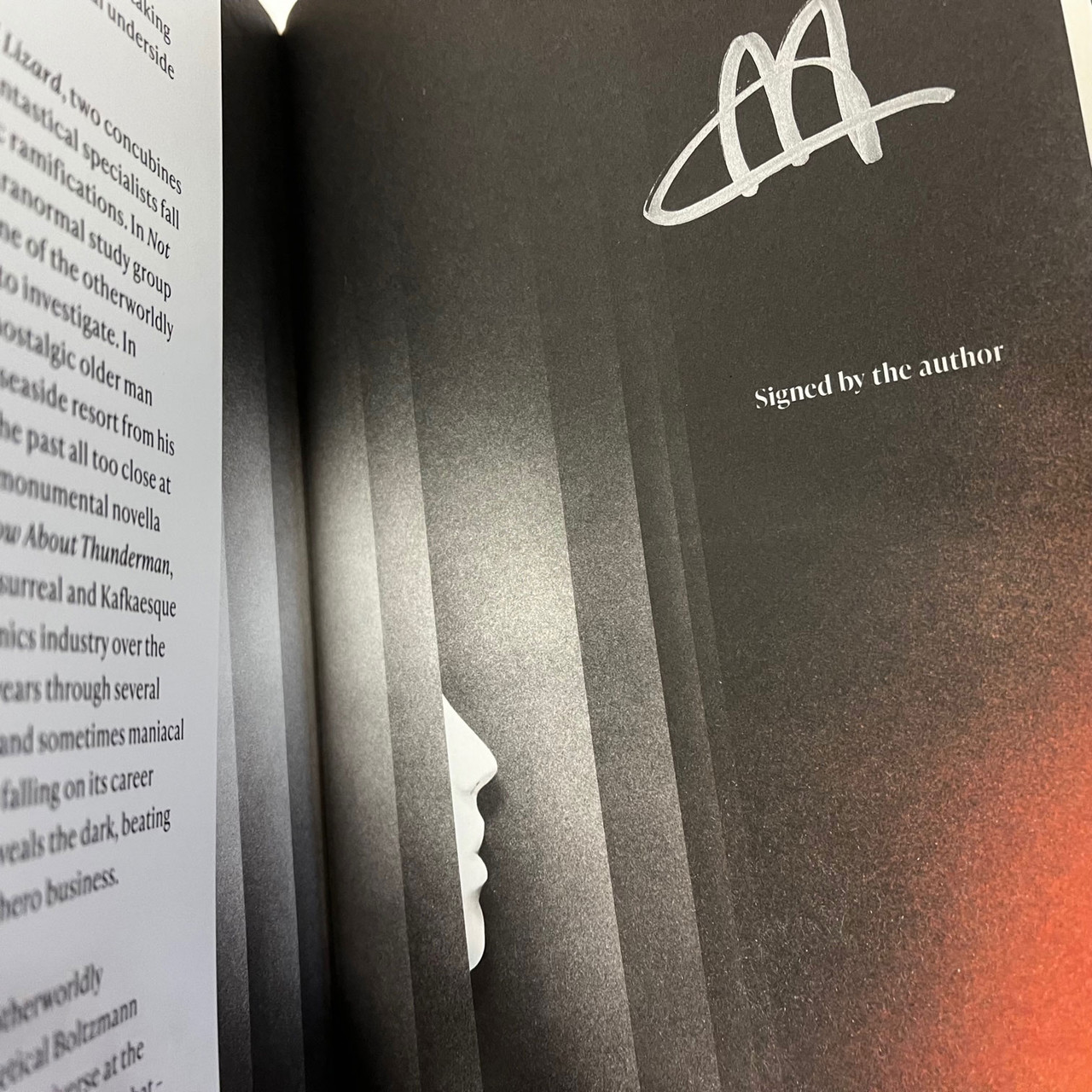 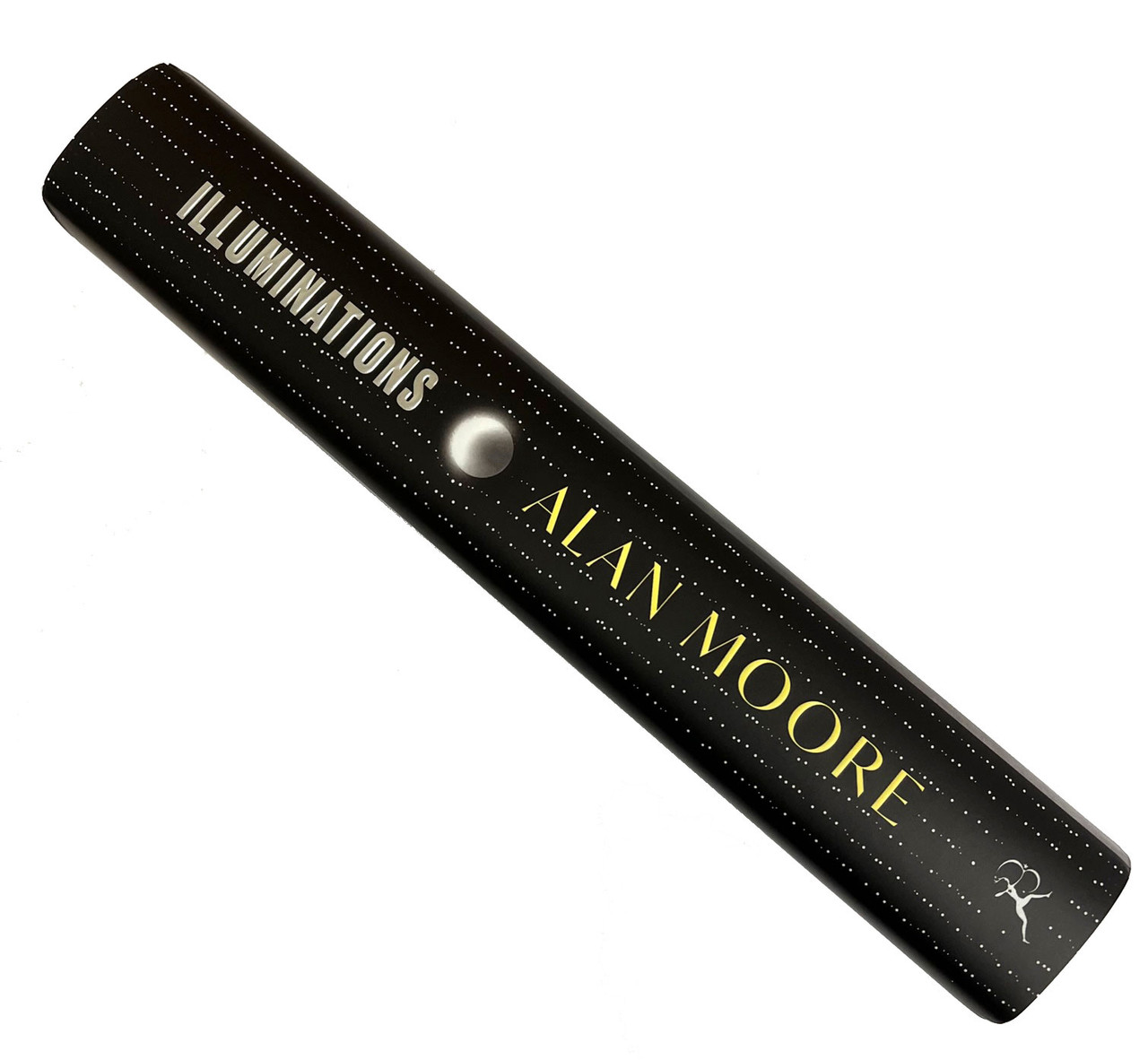 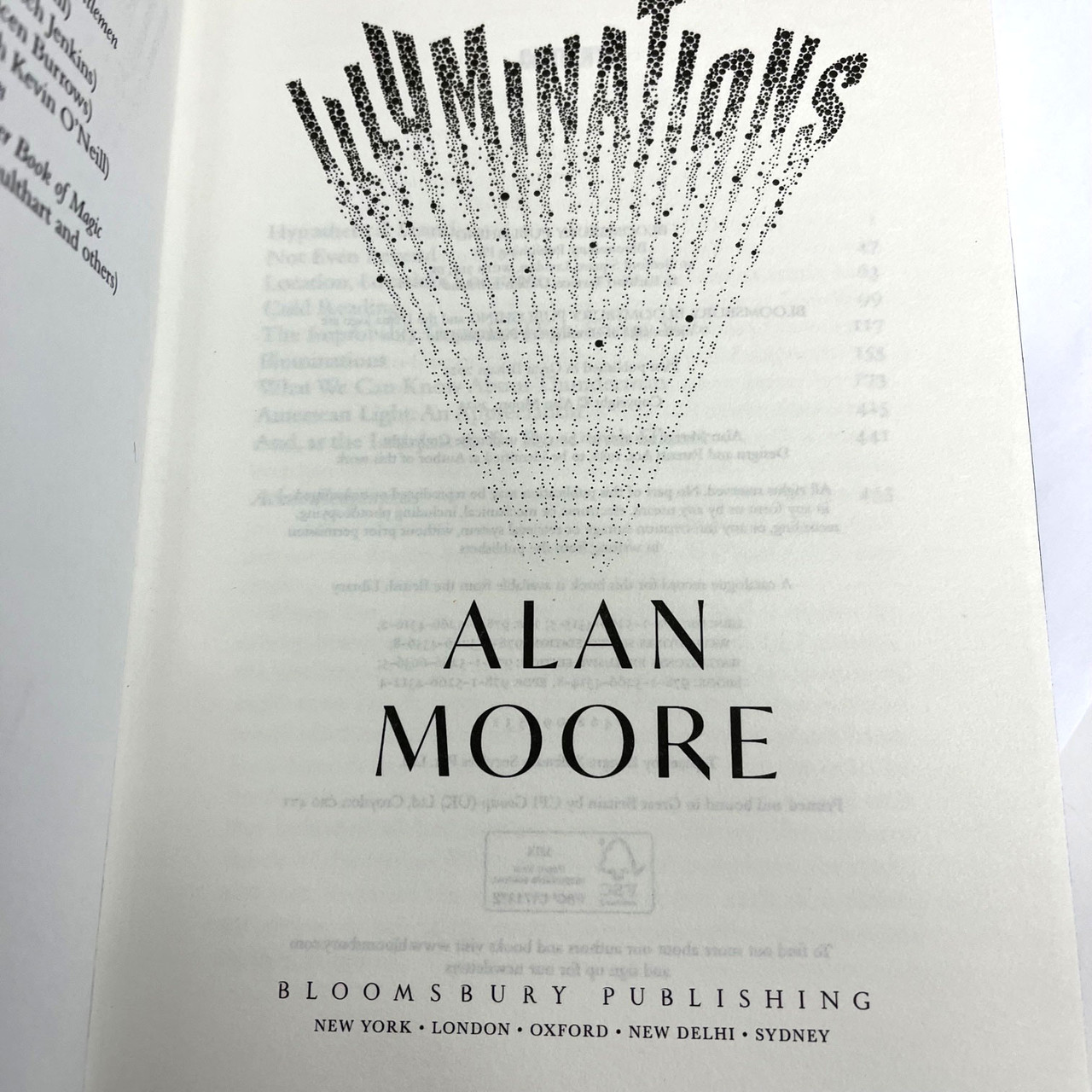 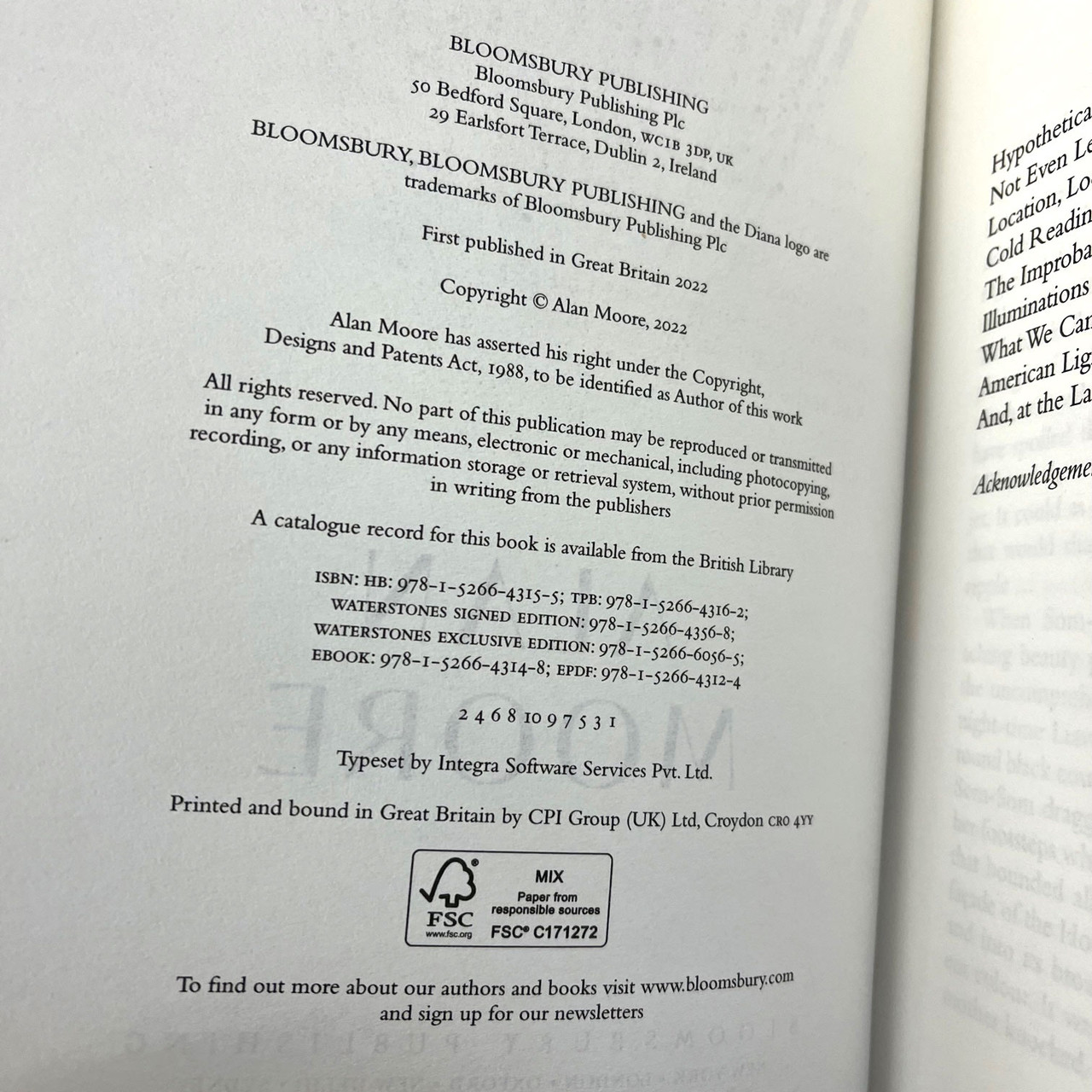 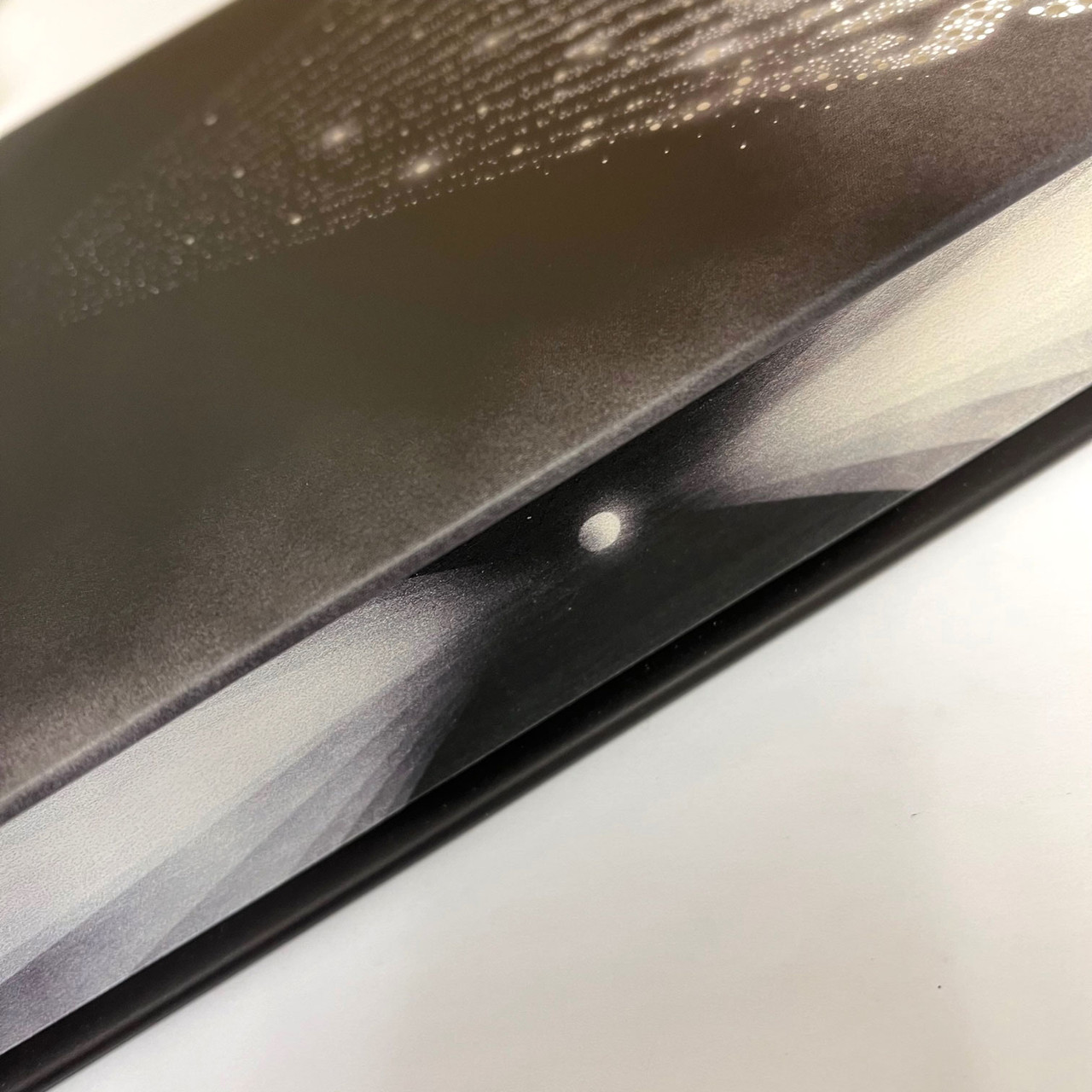 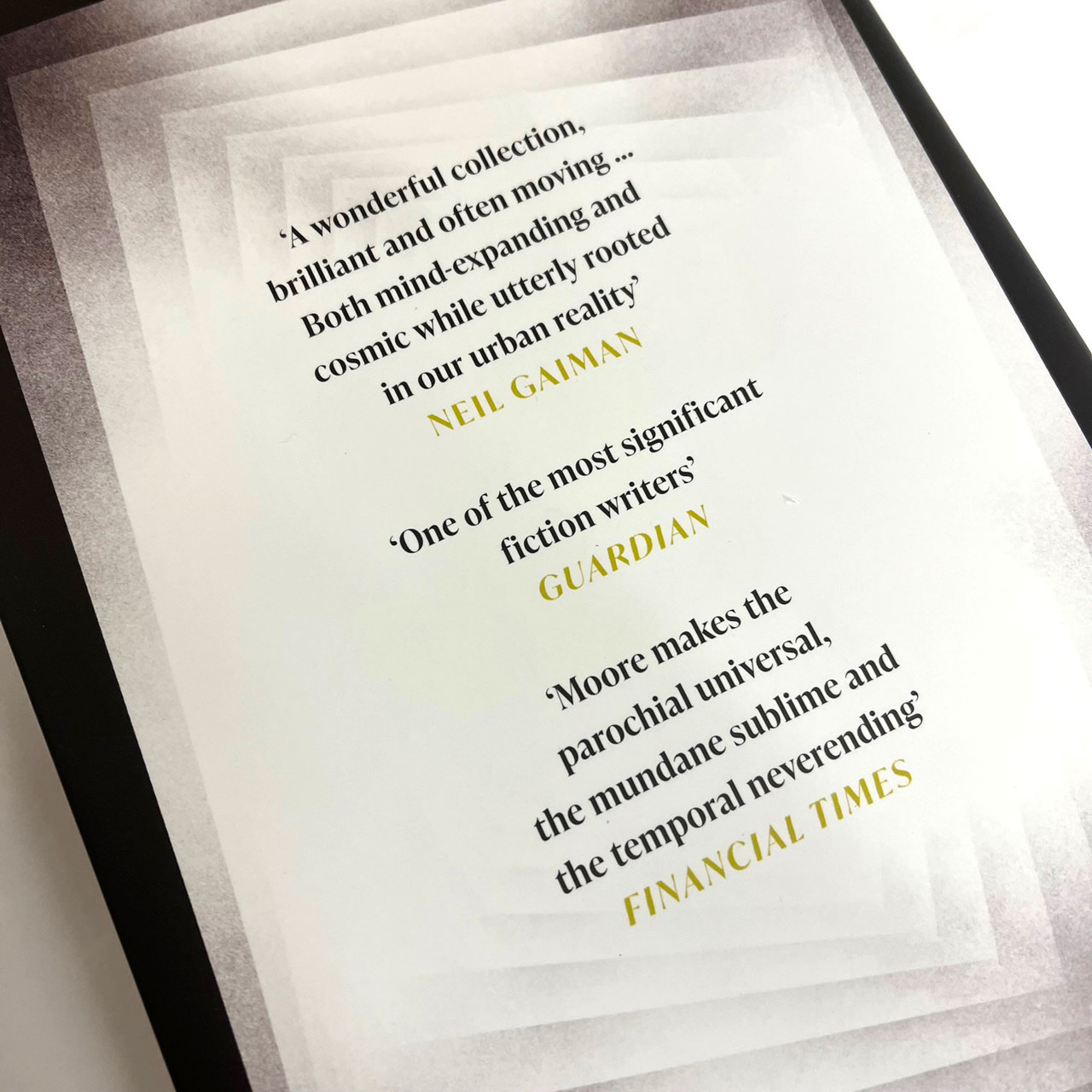 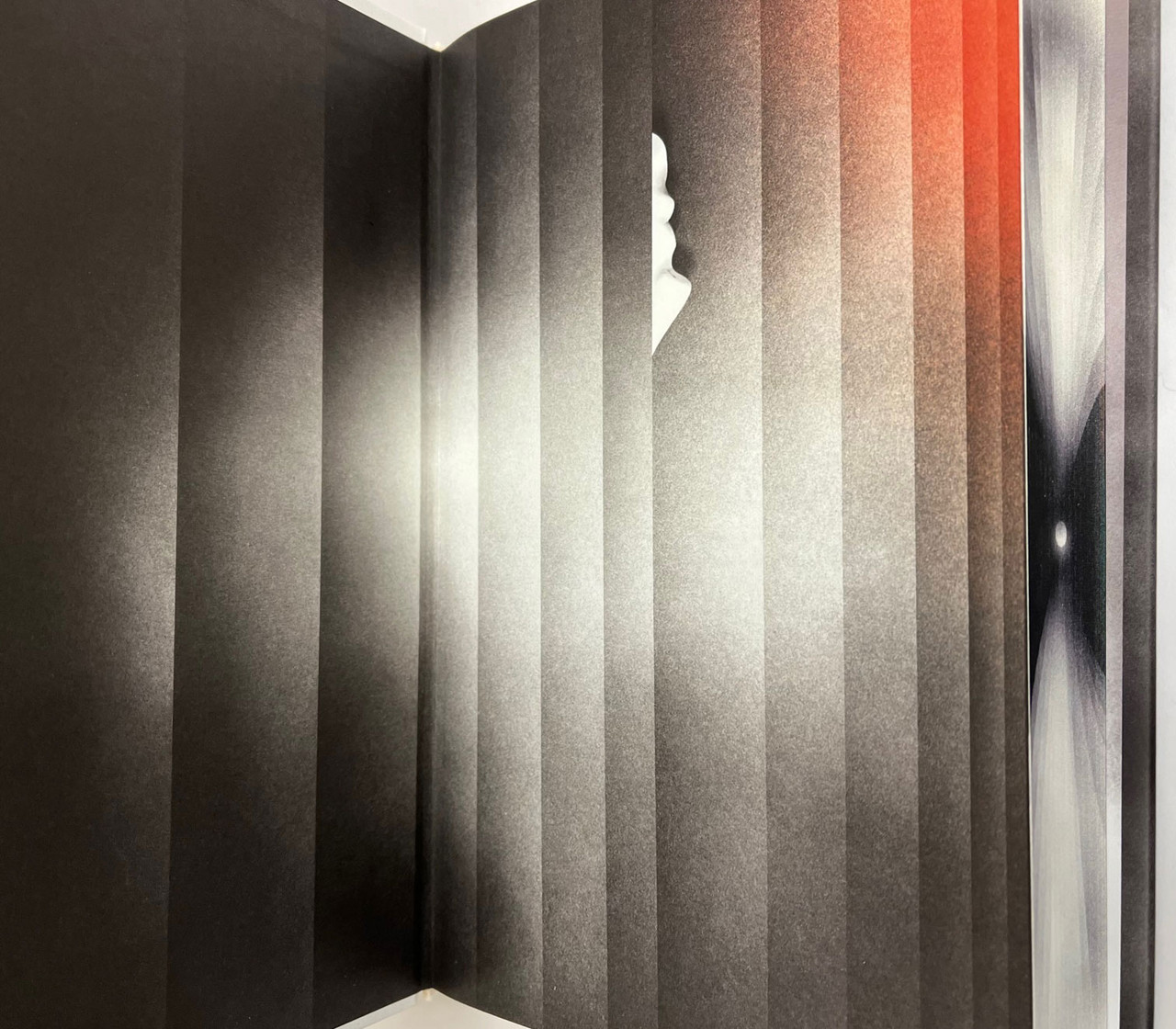 Personally signed by Alan Moore, the English writer widely regarded as the most influential writer in the history of comics and graphic novels, and is the name behind the famous book V for Vendetta.

Bloomsbury Publishing 2022. Alan Moore "Illuminations: Stories". UK Signed First Edition, First Printing with the full number line as required on the copyright page. Signed by the author. Waterstones exclusive. Hardcover. The price on the dust-jacket has not been price clipped. Very Fine without any flaws. Bookseller issued COA.

Illuminations is a momentous, wildly original collection of short stories from 'the king of comics' (the Guardian), each featuring some kind of illumination or realisation.

From the four horsemen of the apocalypse to the Boltzmann brains fashioning the universe at the Big Bang, Alan Moore's beguiling and exquisitely crafted tales reveal the full power of imagination and magic.

Breathlessly original and charged with Moore’s distinctive brand of urbane mysticism, the stories collected in Illuminations range from the four horsemen of the apocalypse to the big bang and are guaranteed to astound and intrigue.

From New York Times bestselling author Alan Moore―one of the most influential writers in the history of comics―"a wonderful collection, brilliant and often moving" (Neil Gaiman) which takes us to the fantastical underside of reality.

In his first-ever short story collection, which spans forty years of work, Alan Moore presents a series of wildly different and equally unforgettable characters who discover--and in some cases even make and unmake--the various uncharted parts of existence.

In "A Hypothetical Lizard," two concubines in a brothel of fantastical specialists fall in love with tragic ramifications. In "Not Even Legend," a paranormal study group is infiltrated by one of the otherworldly beings they seek to investigate. In "Illuminations," a nostalgic older man decides to visit a seaside resort from his youth and finds the past all too close at hand. And in the monumental novella "What We Can Know About Thunderman," which charts the surreal and Kafkaesque history of the comics industry's major players over the last seventy-five years, Moore reveals the dark, beating heart of the superhero business.

From ghosts and otherworldly creatures to theoretical Boltzmann brains fashioning the universe at the big bang, Illuminations is exactly that--a series of bright, startling tales from a contemporary legend that reveal the full power of imagination and magic.

Alan Moore (born 18 November 1953) is an English writer known primarily for his work in comic books including Watchmen, V for Vendetta, The Ballad of Halo Jones, Swamp Thing, Batman: The Killing Joke and From Hell. He is widely recognised among his peers and critics as one of the best comic book writers in the English language. Moore has occasionally used such pseudonyms as Curt Vile, Jill de Ray, Brilburn Logue, and Translucia Baboon; also, reprints of some of his work have been credited to The Original Writer when Moore requested that his name be removed.

Moore started writing for British underground and alternative fanzines in the late 1970s before achieving success publishing comic strips in such magazines as 2000 AD and Warrior. He was subsequently picked up by DC Comics as "the first comics writer living in Britain to do prominent work in America",[3]: 7  where he worked on major characters such as Batman (Batman: The Killing Joke) and Superman (Whatever Happened to the Man of Tomorrow?), substantially developed the character Swamp Thing, and penned original titles such as Watchmen. During that decade, Moore helped to bring about greater social respectability for comics in the United States and United Kingdom.: 11  He prefers the term "comic" to "graphic novel".[5] In the late 1980s and early 1990s he left the comic industry mainstream and went independent for a while, working on experimental work such as the epic From Hell and the prose novel Voice of the Fire. He subsequently returned to the mainstream later in the 1990s, working for Image Comics, before developing America's Best Comics, an imprint through which he published works such as The League of Extraordinary Gentlemen and the occult-based Promethea. In 2016, he published Jerusalem: a 1,266-page experimental novel set in his hometown of Northampton, UK.

Moore is an occultist, ceremonial magician,[6] and anarchist,[7] and has featured such themes in works including Promethea, From Hell, and V for Vendetta, as well as performing avant-garde spoken word occult "workings" with The Moon and Serpent Grand Egyptian Theatre of Marvels, some of which have been released on CD.

Despite his objections, Moore's works have provided the basis for several Hollywood films, including From Hell (2001), The League of Extraordinary Gentlemen (2003), V for Vendetta (2005), and Watchmen (2009). Moore has also been referenced in popular culture and has been recognised as an influence on a variety of literary and television figures including Neil Gaiman, and Damon Lindelof. He has lived a significant portion of his life in Northampton, England, and he has said in various interviews that his stories draw heavily from his experiences living there. 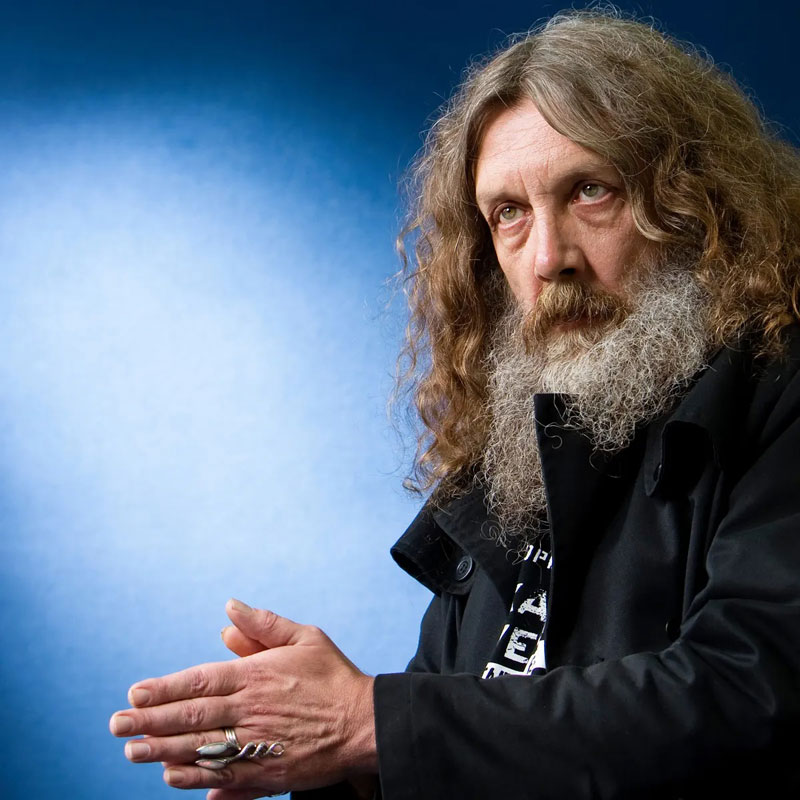 “Burn[s] with Moore's soaring intelligence and riotous humanity . . . Illuminations, Moore's first collection of short fiction, finds the writer working on a smaller scale but still swinging for the firmament . . . the book showcases all of Moore's strengths as a fantasist . . . Moore has written both a dynamite story collection and a dynamite monster manual . . . Moore's failures are few, his radiances many . . . Remarkable.” ―Junot Diaz, The New York Times Book Review

"Mr. Moore’s writing is as brilliant as ever―from dizzying wordplay in scene-setting detail to cuttingly succinct summaries . . . As for the stories themselves, there is no shortage of wild invention . . . Fans of Mr. Moore in all his incarnations will love this collection." - Wall Street Journal

“Illuminations is a wonderful collection, brilliant and moving . . . Both mind-expanding and cosmic while utterly rooted in our urban reality, written in language that coruscates, concatenates and glitters . . . [It] refuses to leave your head after you've read it.” ―Neil Gaiman, author of AMERICAN GODS and NORSE MYTHOLOGY

“One of the most significant fiction writers in English . . . Moore's influence can be felt everywhere-in our literature, on our screens, in our politics.” ―Guardian

“His bighearted passion for his people . . . and the whole monstrous endeavor of the human condition is infectious. I'm not sure there's a God, but I thank Her for Alan Moore.” ―Entertainment Weekly

"Hilarious . . . [Moore] deconstructs the industry that sells superheroes by using its own myths against it . . . The collection is really good." - Slate

“Illuminations is a fascinating book . . . from the mind of one of the most celebrated comic book writers in the English language . . . you’re in for a wild ride, from start to finish." - Alex Kingsley, Ancillary Review of Books

“Legendary graphic novelist Moore (Watchmen, V for Vendetta, and many others) burnishes his reputation in his first prose collection, which features nine career-spanning tales. The standout short novel “What We Can Know About Thunderman” is a scathing take on the American comic book industry and its impact on popular culture and politics, and his subversive talent is equally on display in shorter tales. This brilliant volume dazzles at every turn” ―Publishers Weekly

“Moore's dark humor and expert twists are on full display in these fictions. Fans of dark fantasy and dark humor will enjoy this collection from one of fantasy's greats.” ―Booklist

“The Shakespeare of the comic book . . . His prose fiction thrums with the zest of somebody who feels newly untrammelled . . . conveying the exhilarating sense of words rushing to catch up with the author's never-ending stream of ingenious ideas.” ―The Daily Telegraph

“One of the great fiction minds of his generation.” ―Rolling Stone

“The question of whether he's a fountain of imagination or just bats has never arisen: He's both, and his ability to see familiar ideas from an alien perspective is one of his best tricks.” ―Slate

“Moore's prose is rich and complicated . . . Once you slip into the rhythm of it, it is also poetic, insightful, and beautiful.” ―Pittsburgh Post-Gazette

“A heart-filled novel about an iconic and persevering father and daughter.”—Time Personally signed by Taylor Jenkins Reid and Limited To only 500.Hutchinson Heinemann. August 30,...