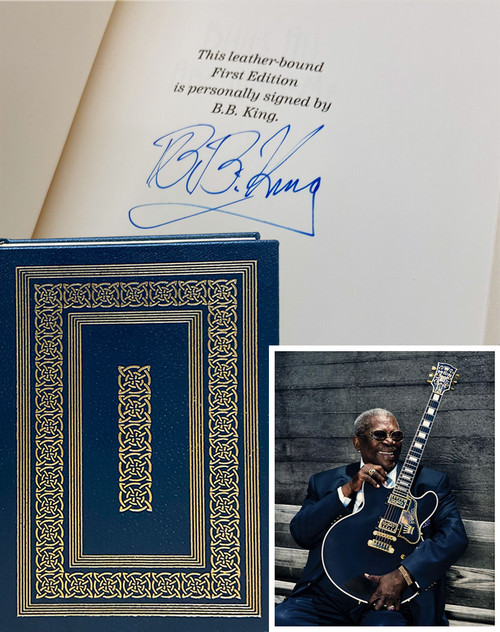 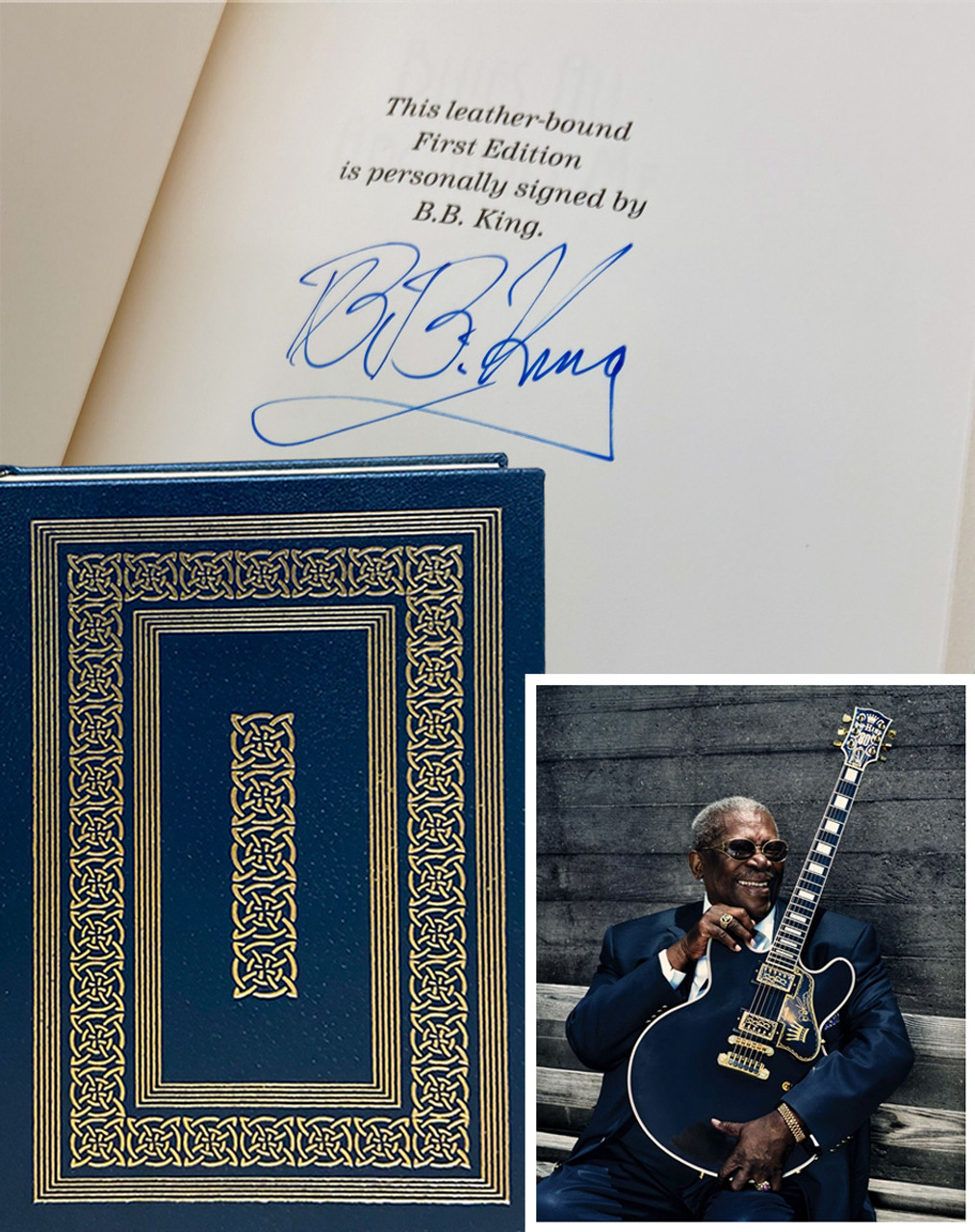 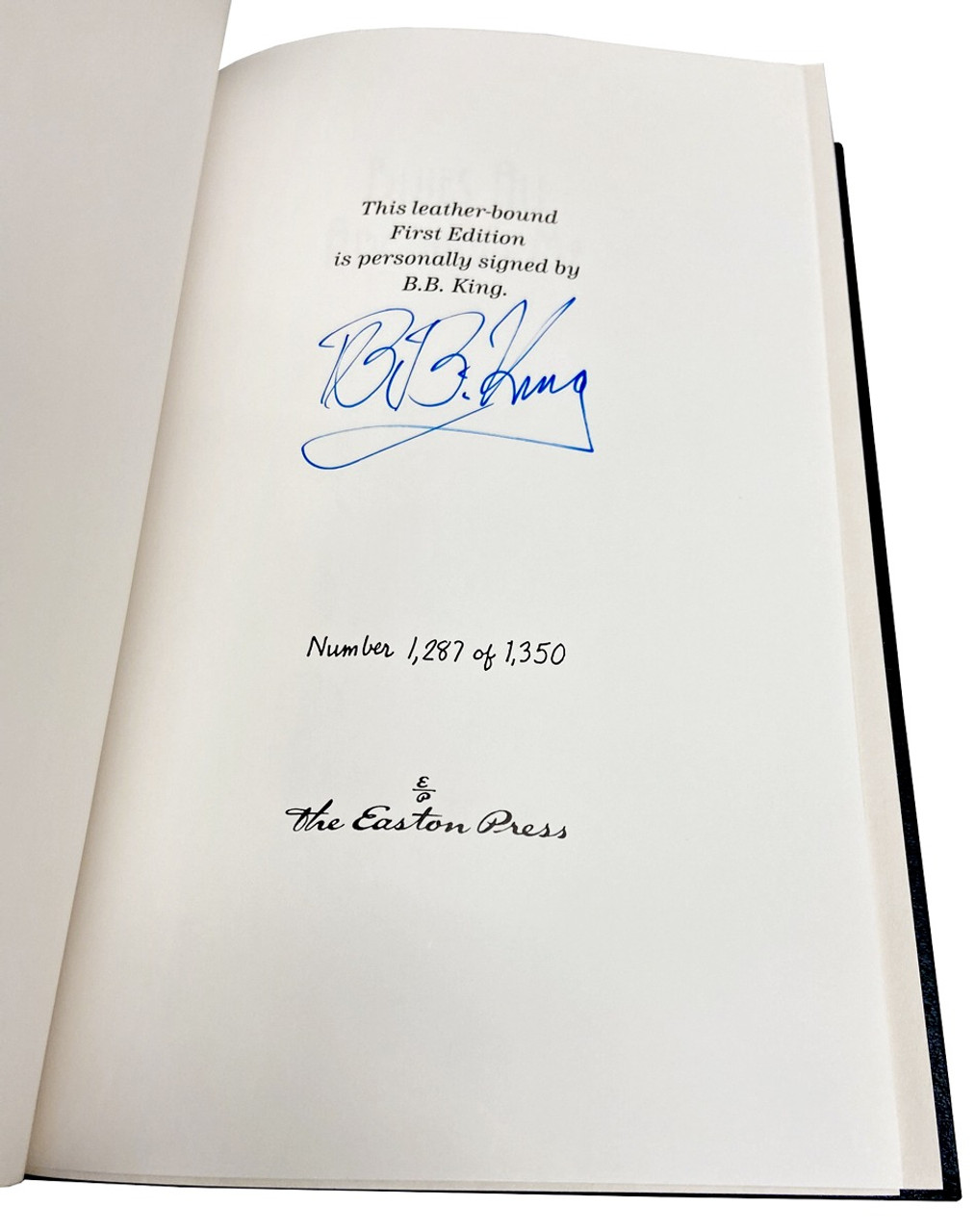 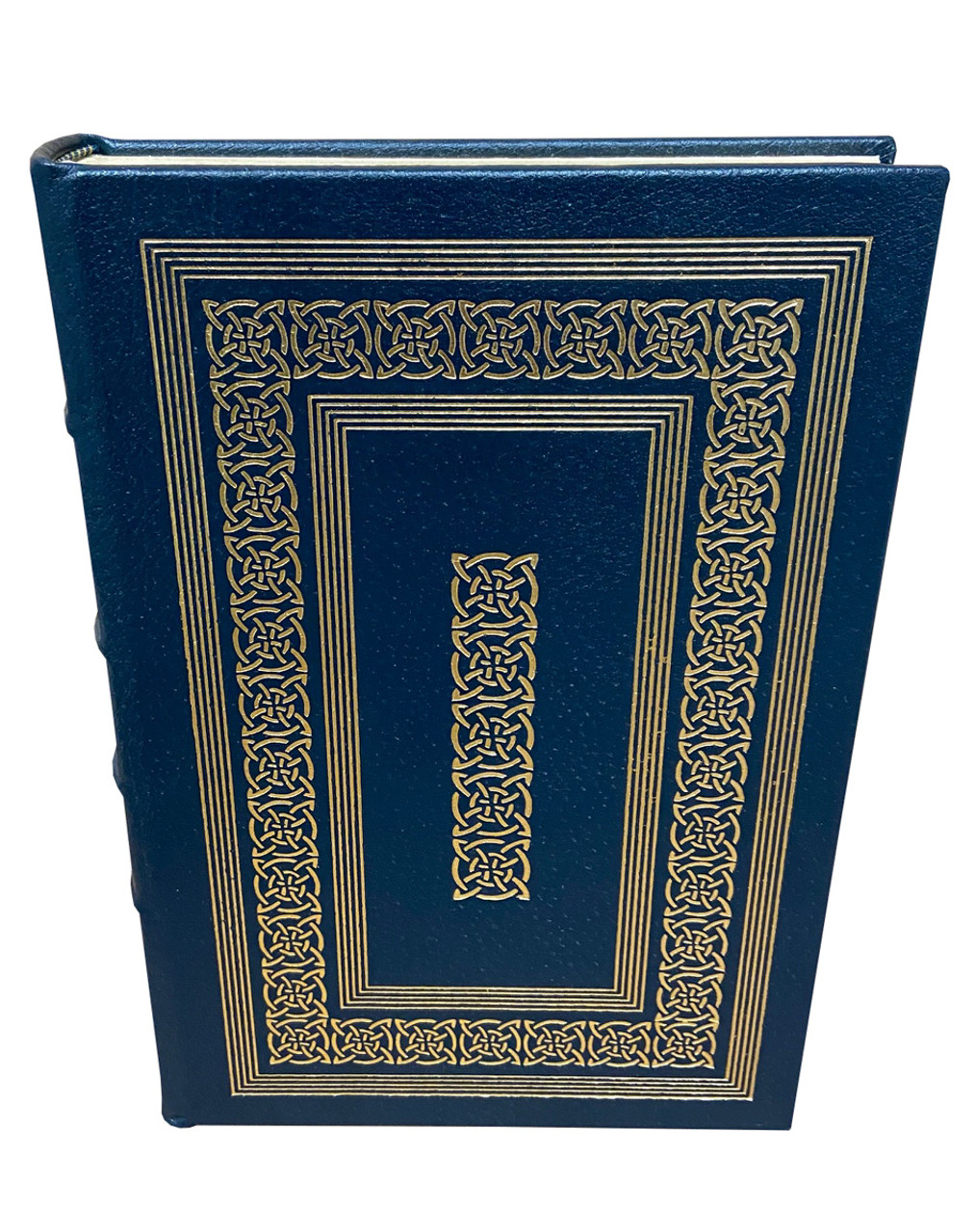 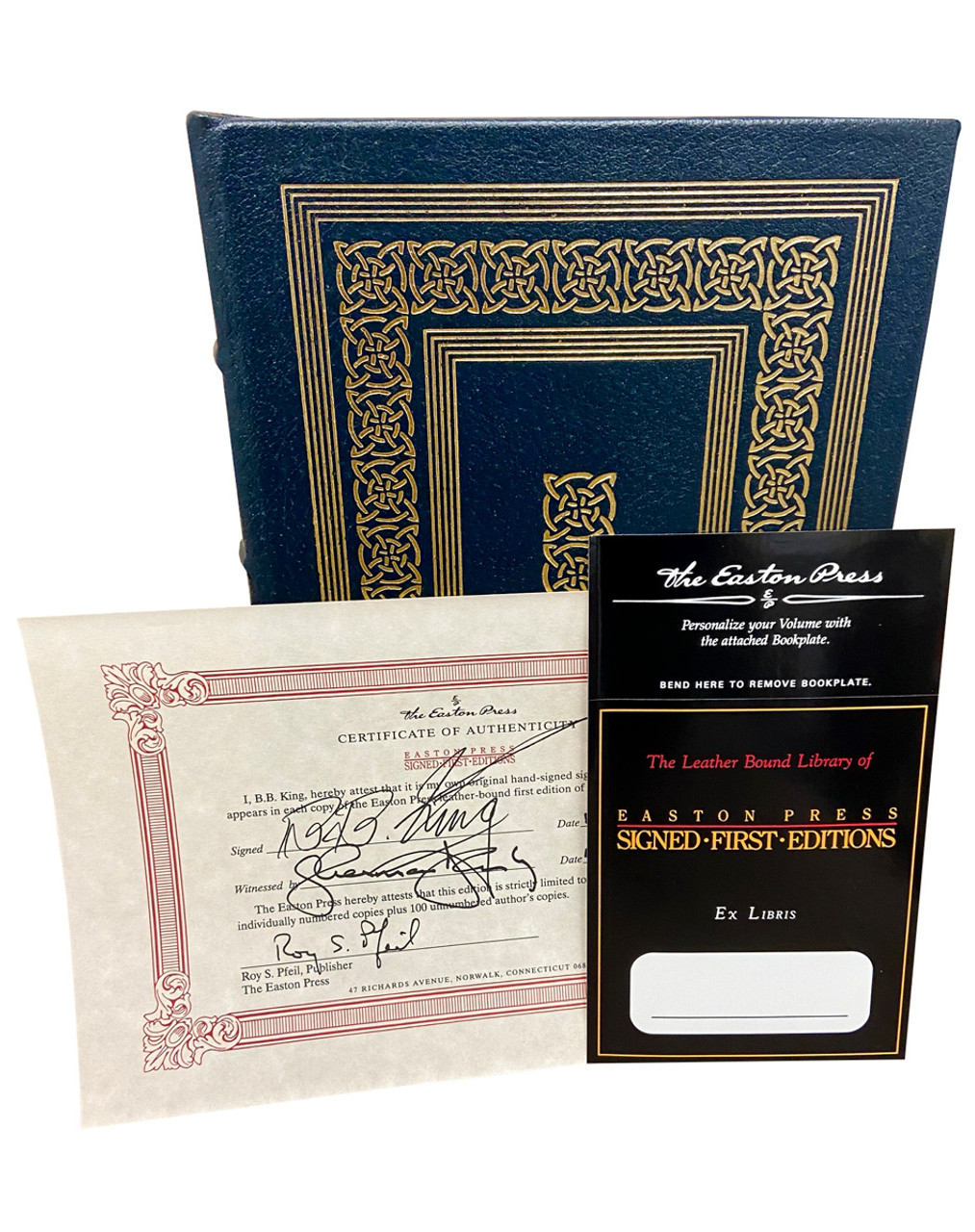 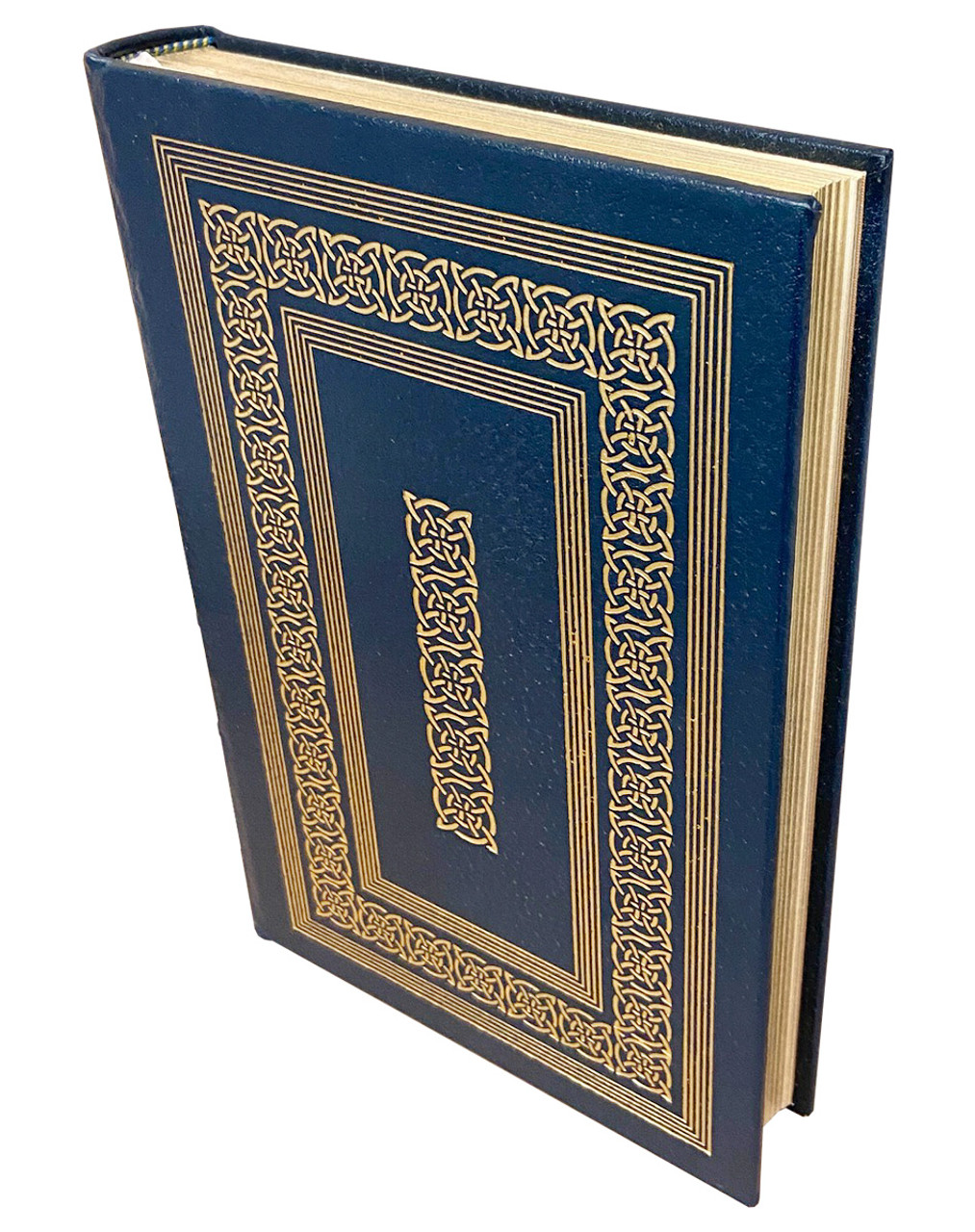 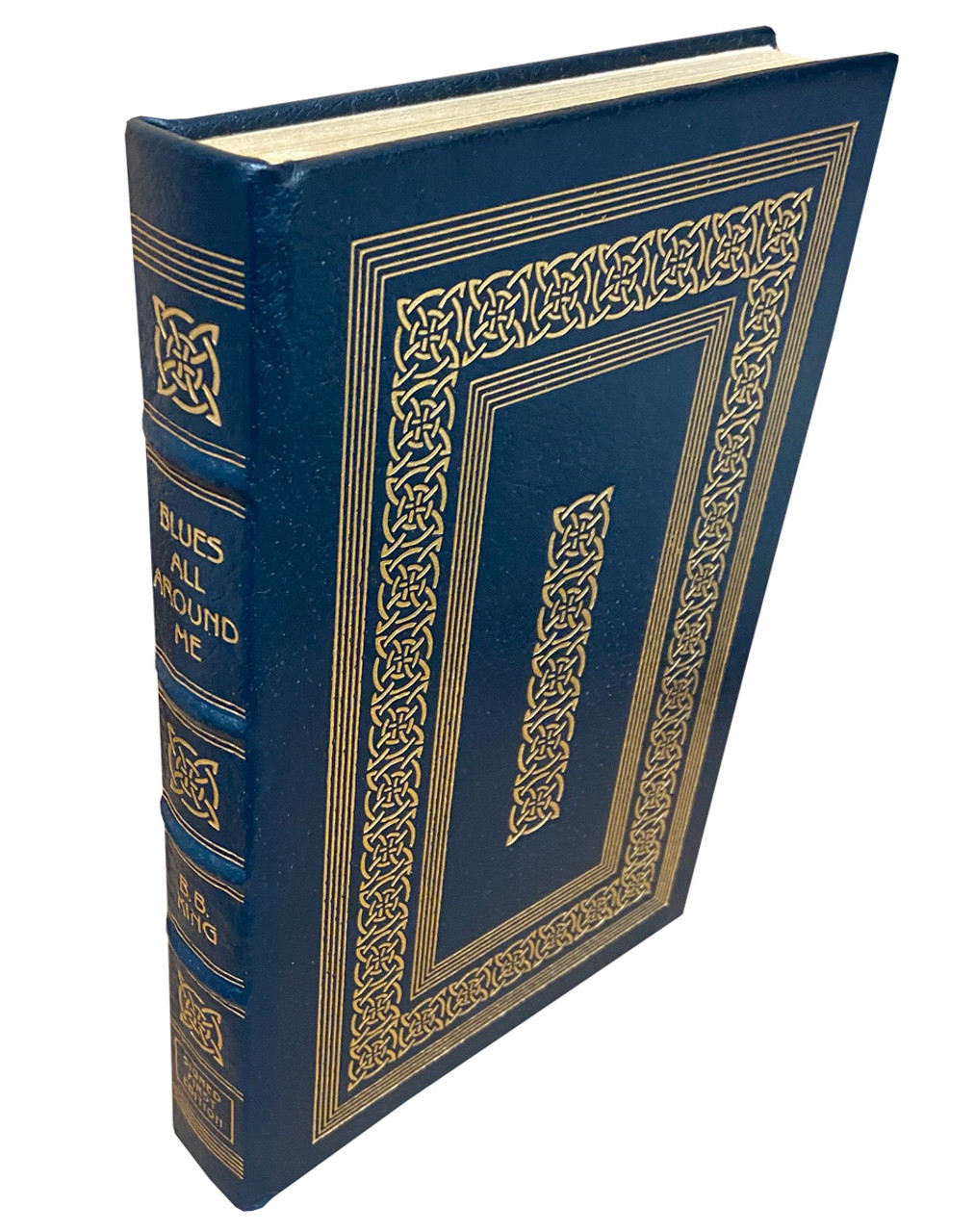 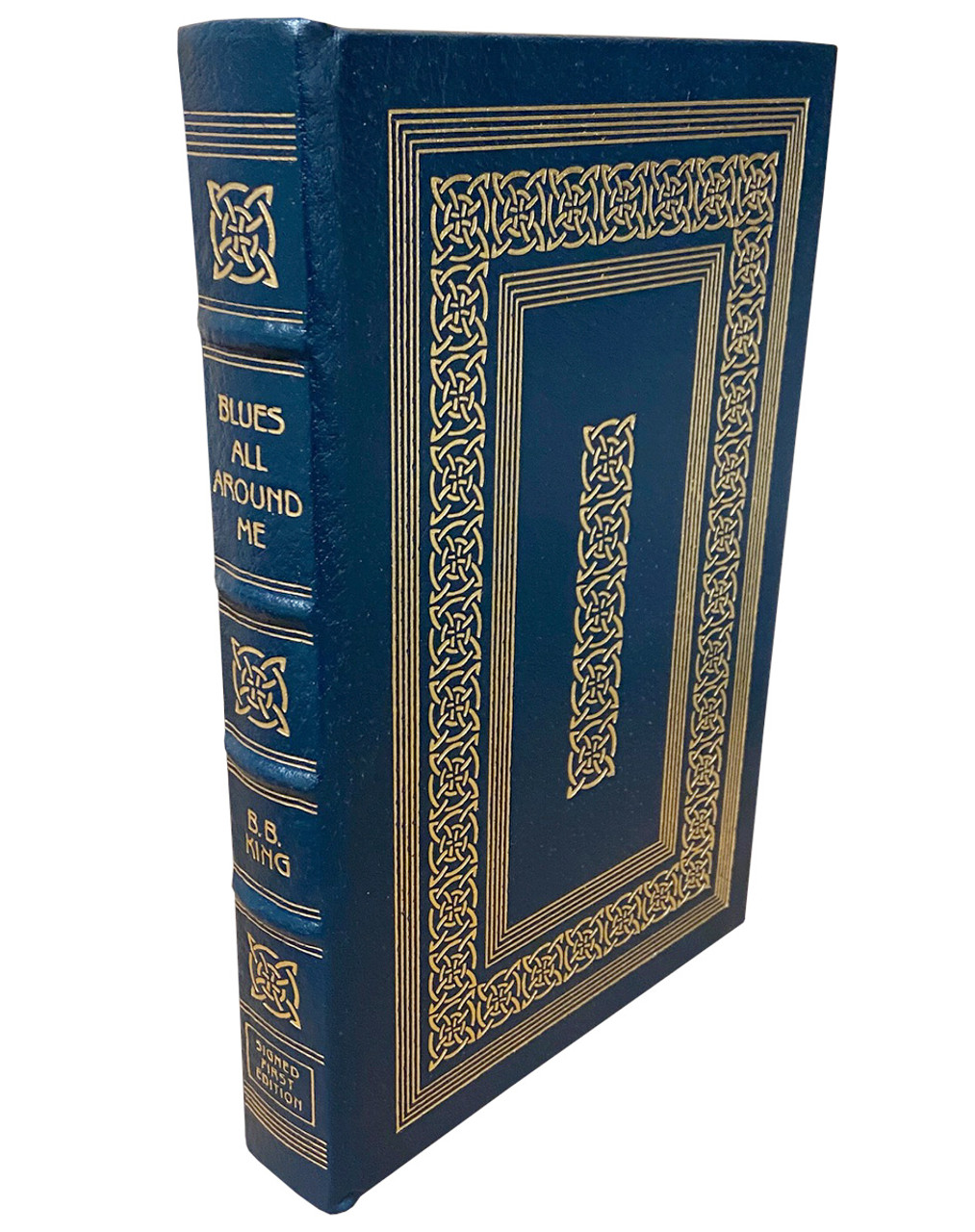 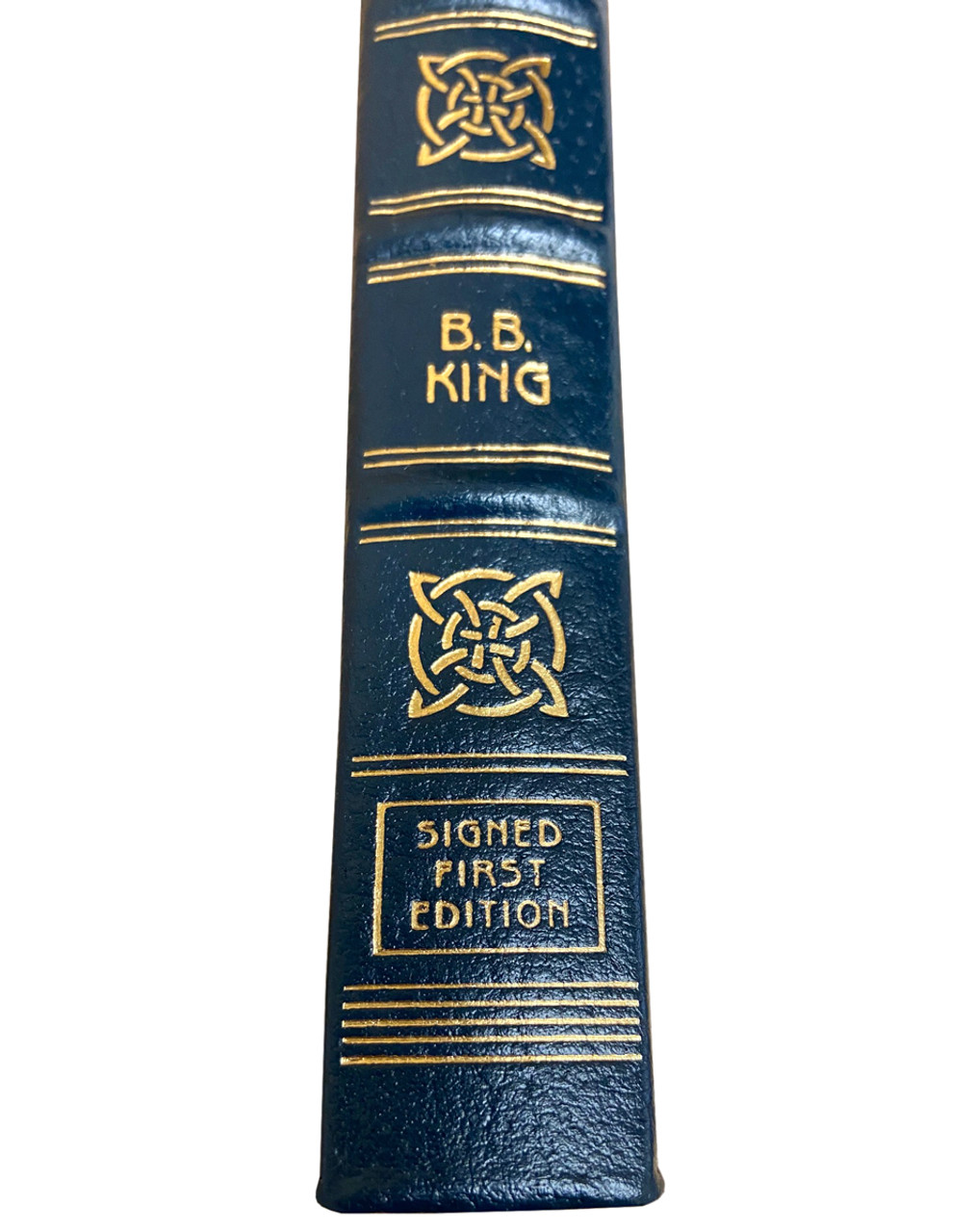 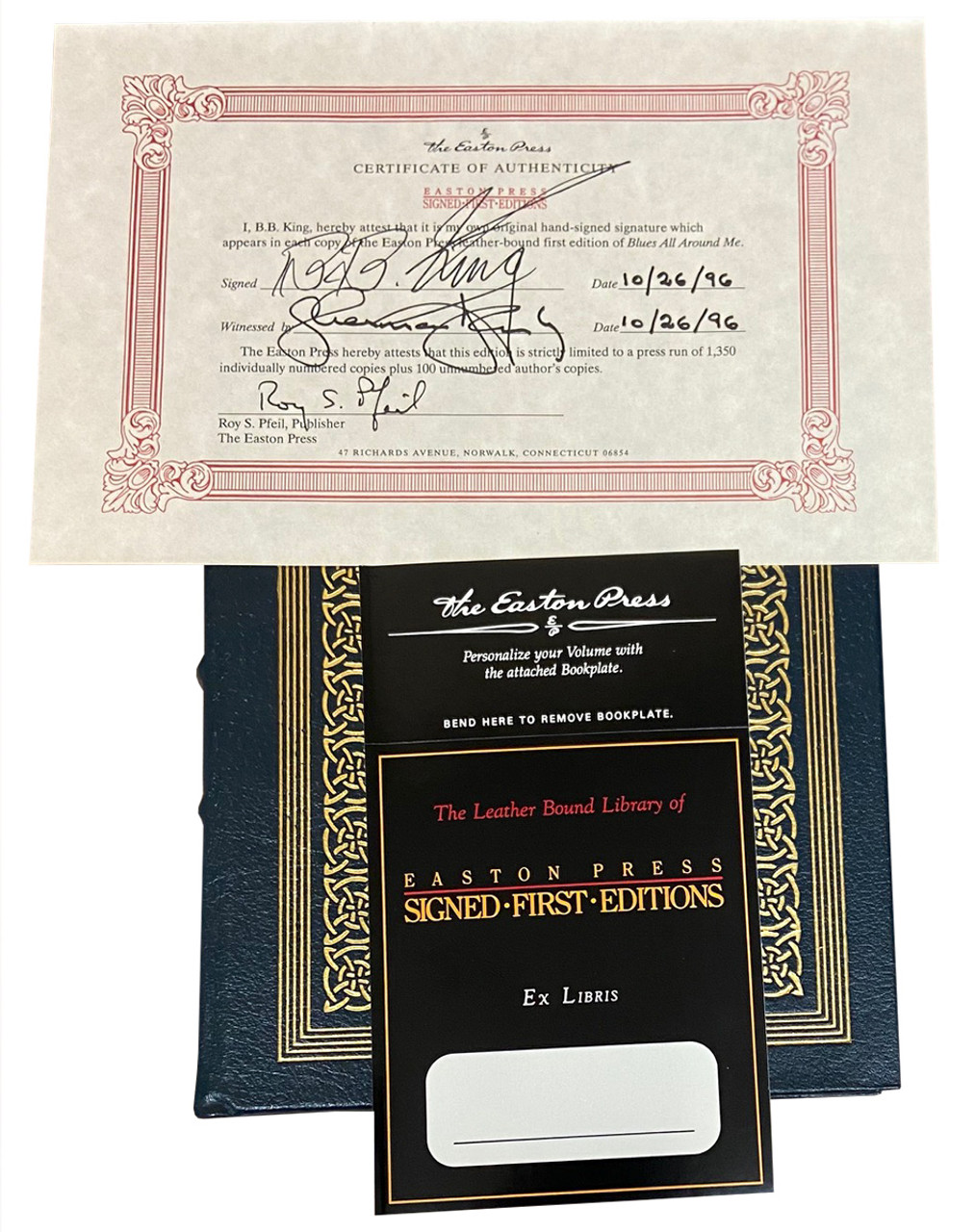 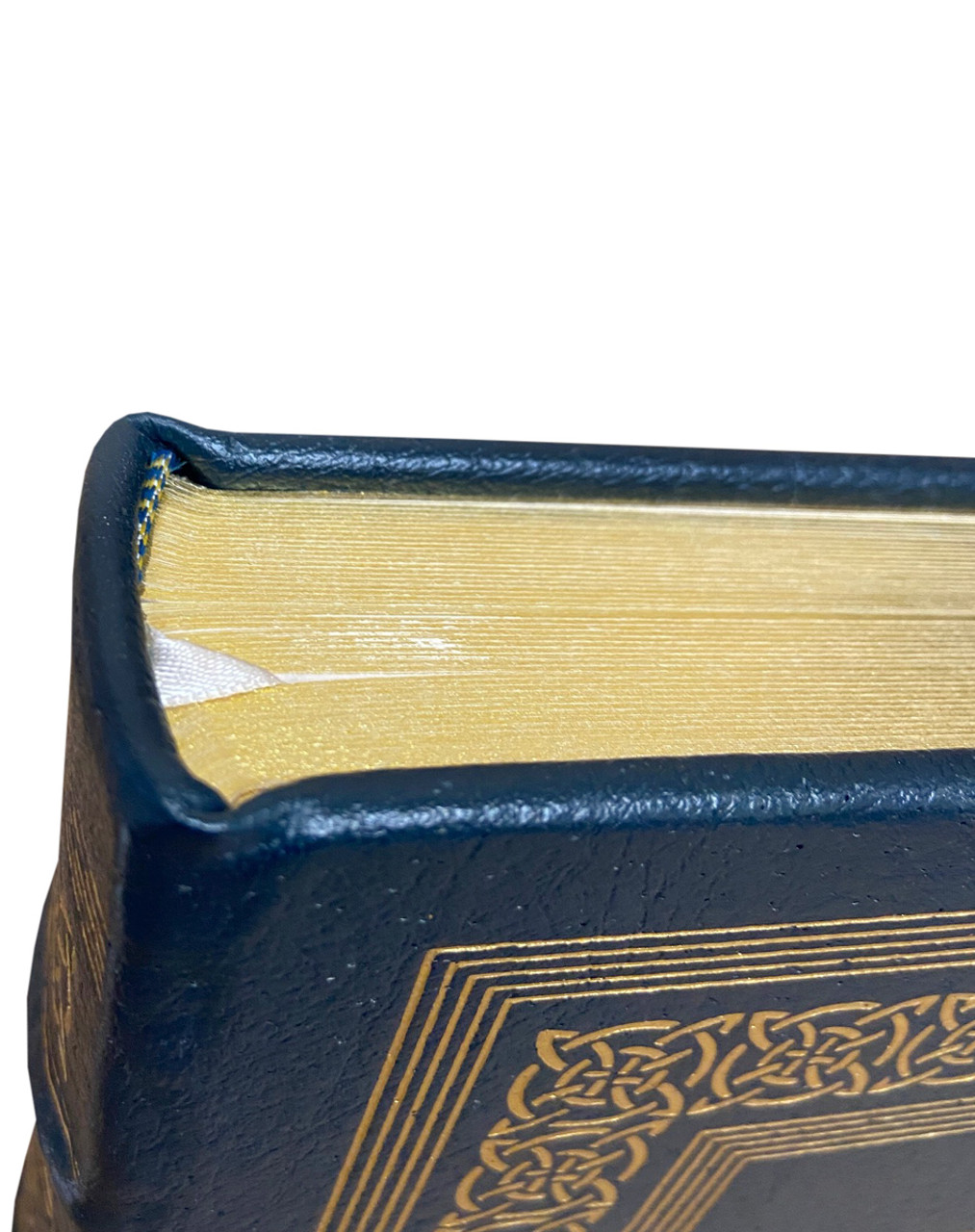 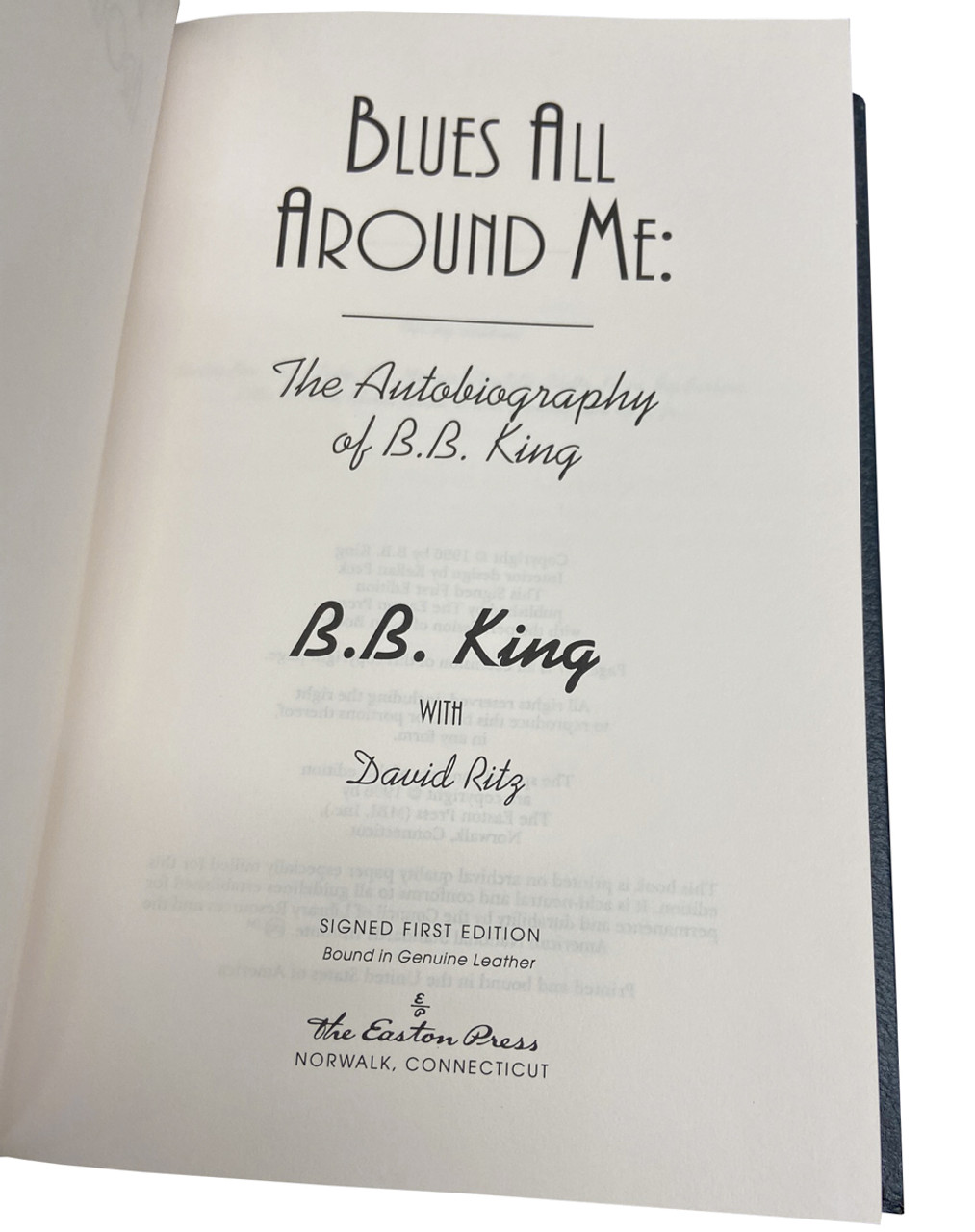 Personally signed by B.B. King, the Rock and Roll Hall of Famer, and one of the most influential blues musicians of all time. 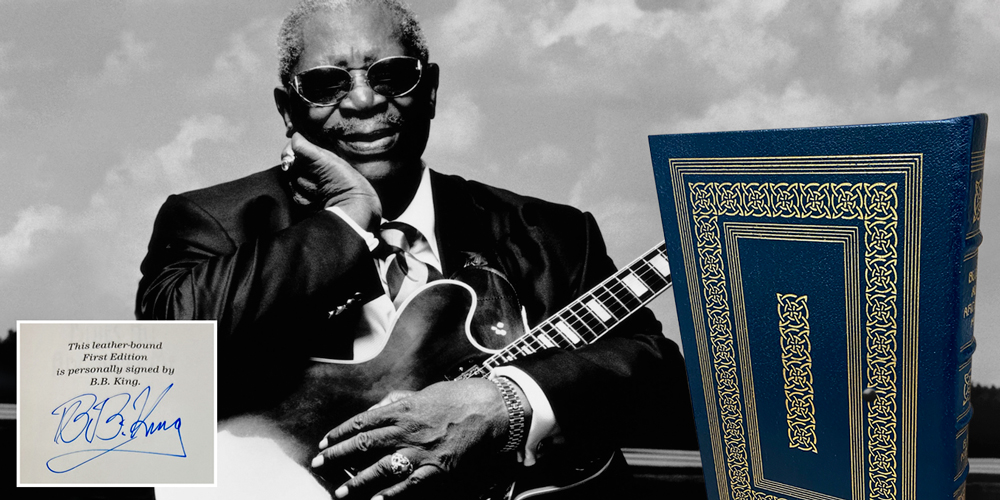 Easton Press, Norwalk CT. "Blues All Around Me: The Autobiography of B.B. King" Signed First Edition. Leather bound Collector's Edition w/COA. Personally signed by the author B.B. King directly onto the limitation page. This is number 1,287 of only 1,350 produced. Very Fine- with a small area of gilt loss to the page edges at the top of the book.

B. B. King's numerous honors include an honorary doctorate from Yale University, a Presidential Medal of the Arts, and fifteen Grammy Awards. He is a member of the Rock and Roll Hall of Fame and the Blues Hall of Fame, and has more than ninety albums and anthologies to his credit.

Charming...honest...transcendent...an eloquent autobiography...It reads like a warm and lengthy conversation with a closefriend. Aficionados of the blues will find plenty to pique their interest, but the book truly shines because of the portrait itpaints of a man who has made kindness and respect a lifelong philosophy. (Billboard)

B.B. King is the preeminent living practioner of the bluesBlues All Around Me is a treasure trove of informatinotold with real feeling (Washinton Post Book World)

B.B.s life and 50-year career is a precious piece of American history that no one could have told betterexcept maybe Lucille. (Vibe)

For almost 50 years, King has let his guitar, Lucille, do the talking. Now the celebrated bluesman tells his own gutsy story. (Buzz)

A classy book from a classy manstraightforward, frank, unaffected, and breezy, with many funny, insightful stories and anecdotes. (Seattle Times)

King tells his very American success story with the lyricism and leisurely pace of a born storytellerwith warmth and sincerity. (Rolling Stone)

This is one of the best recent pop-music bios. King speaks straight from the soul, it seems, just like he plays guitar. (Booklist)

Excellent...provocative...King comes off in print not unlike he does in his music: warm and polite, down gome and sophisticated, expressive and tasteful. (Orlando Sentinel)

Riley B. King (September 16, 1925 – May 14, 2015), known professionally as B.B. King, was an American blues singer-songwriter, guitarist, and record producer. He introduced a sophisticated style of soloing based on fluid string bending, shimmering vibrato and staccato picking that influenced many later blues electric guitar players. AllMusic recognized King as "the single most important electric guitarist of the last half of the 20th century".

King was inducted into the Rock and Roll Hall of Fame in 1987, and is one of the most influential blues musicians of all time, earning the nickname "The King of the Blues", and is considered one of the "Three Kings of the Blues Guitar" (along with Albert King and Freddie King, none of whom are related). King performed tirelessly throughout his musical career, appearing on average at more than 200 concerts per year into his 70s. In 1956 alone, he appeared at 342 shows.

King was born on a cotton plantation in Itta Bena, Mississippi, and later worked at a cotton gin in Indianola, Mississippi. He was attracted to music and the guitar in church, and began his career in juke joints and local radio. He later lived in Memphis, Tennessee and Chicago, and as his fame grew, toured the world extensively. King died at the age of 89 in Las Vegas, Nevada, on May 14, 2015.

B. B. King has the blues running through his blood.

Growing up in the rural poverty of the Mississippi Delta, King first experienced the blues at nine years old, when his mother passed away. The man of the house before the end of his first decade, he used this strife as a source of inspiration and launched one of the most celebrated musical careers in American history.

King has led a remarkable life, and this riveting autobiography dramatizes his whirlwind adventures from the Memphis of the forties to the Moscow of the nineties with unflinching candor and sincerity. But most of all, B.B.'s story is the story of the bluesthe evolution from country acoustic to urban electric, the birth and explosion of rock 'n' rolland B.B.'s own long, but ultimately triumphant, struggle for crossover success, during which he remained unwaveringly true to the music of his heart. 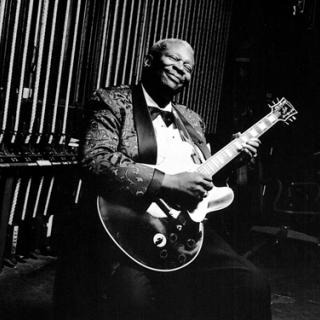 VERY FINE-. Slight loss to the gilded page edges in one small area at the top of the book. Square and tight spine with clear graphics. Unread book. A wonderful bright clean copy free of any markings, writings, or stamps. Sharp corners that are not bumped. No attached bookplate or indication of any removed. Photos of actual item.

Personally signed by Gordon Cooper, the American aeronautical engineer, test pilot and one of the seven original astronauts in Project Mercury. A Rare Signed Leather Bound Volume for your Space...