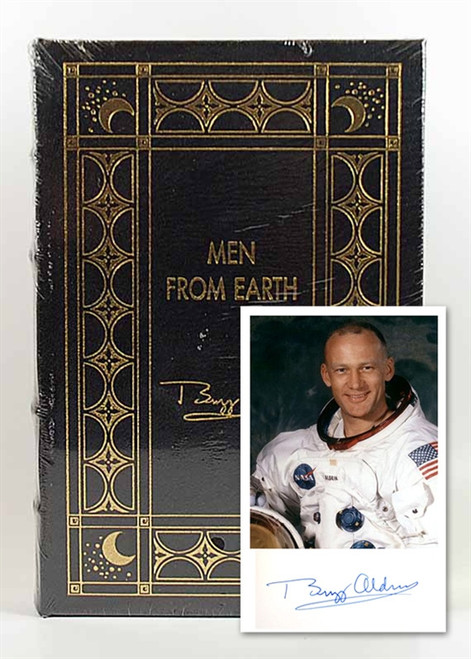 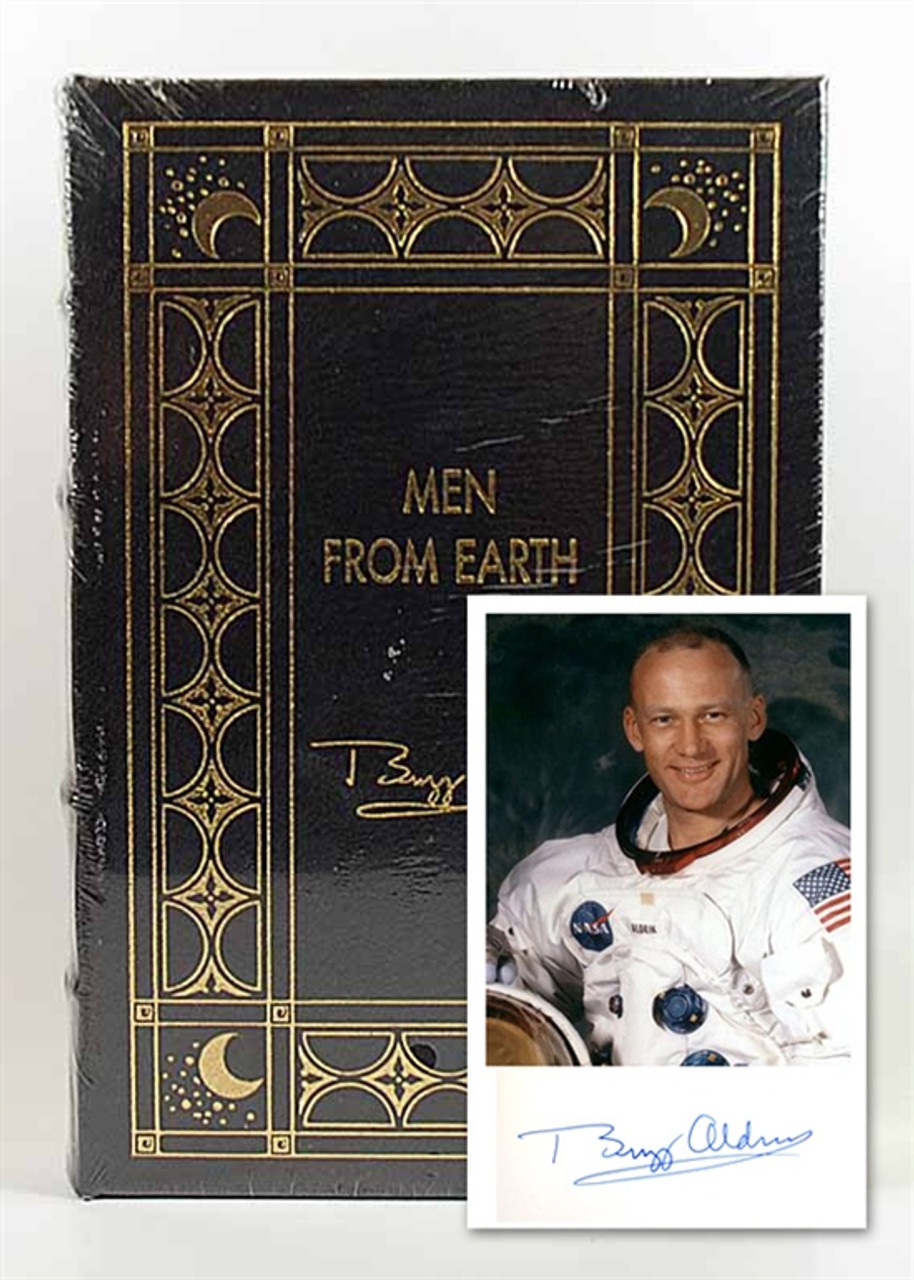 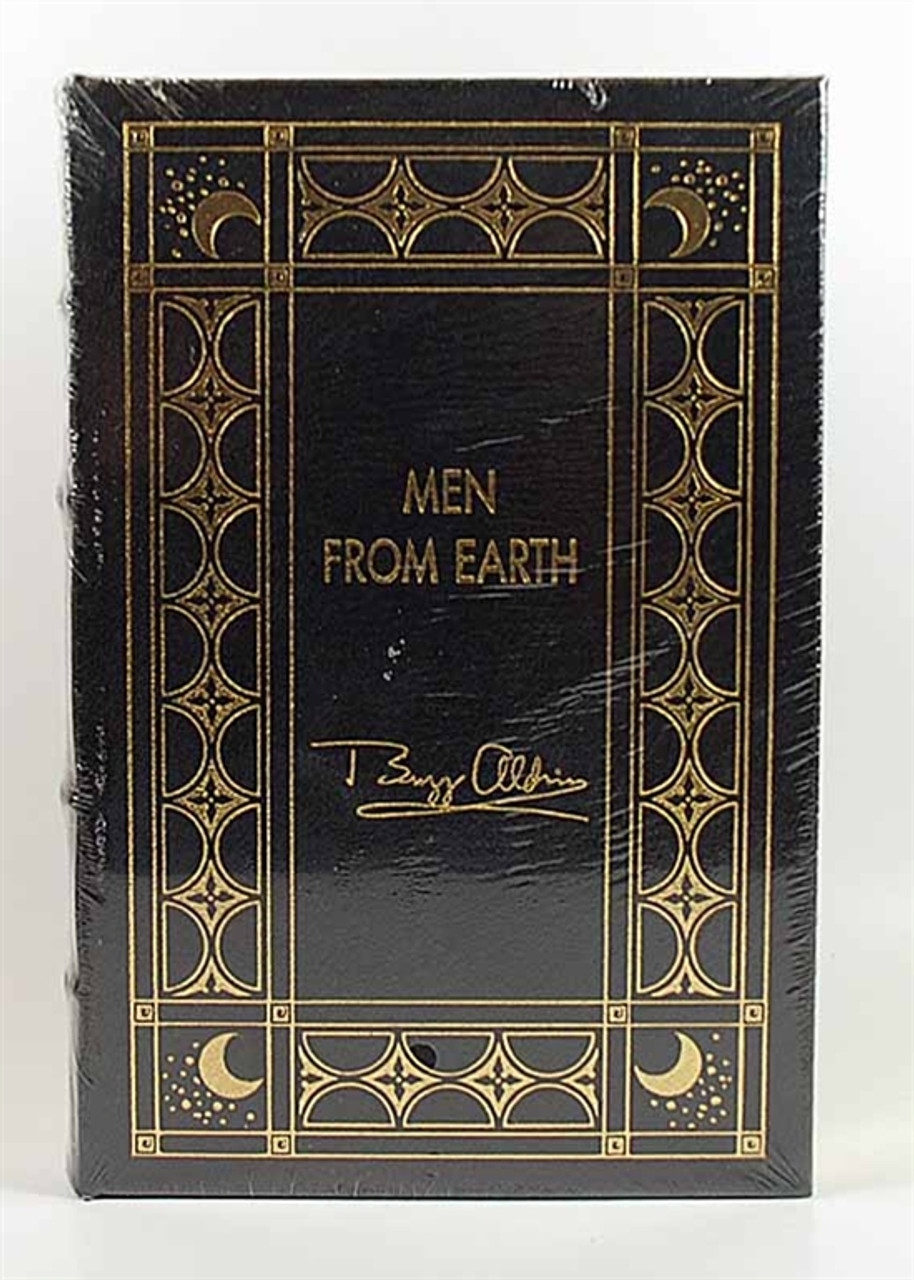 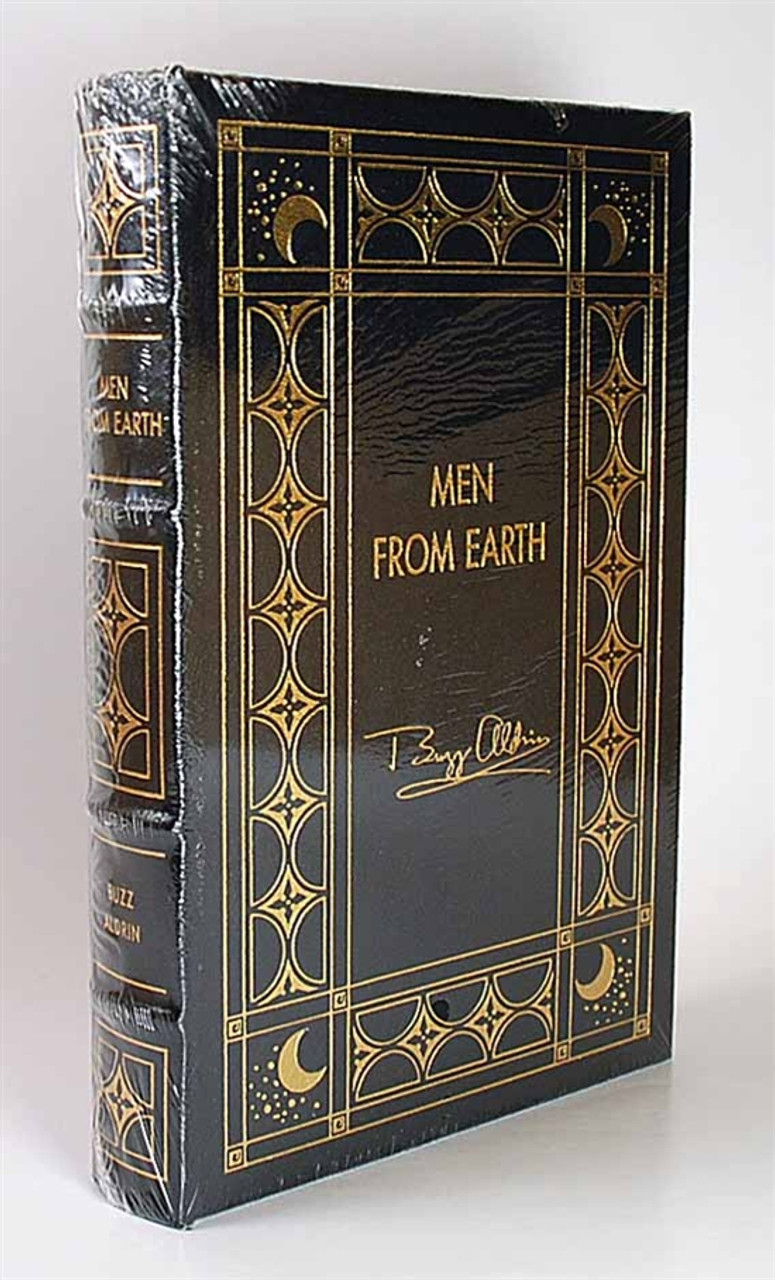 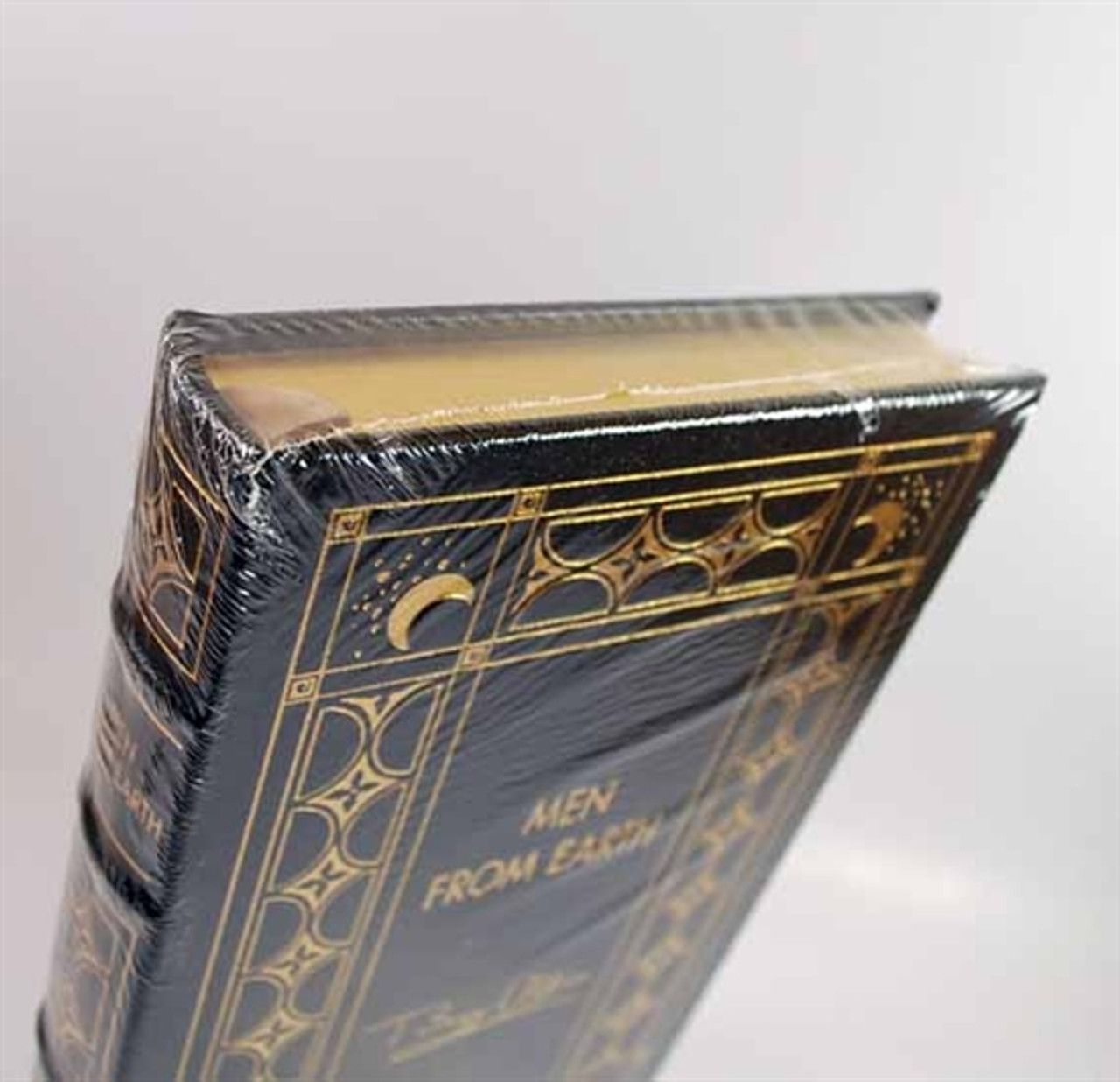 "On July 20, 1969, Buzz Aldrin walked on the moon. Here he relives the dramatic human story of Project Apollo." A beautiful leather bound edition, personally signed by Buzz Aldrin, one of the first men to walk on the moon. A wonderful unique gift for the space historian. As New in the original shrink-wrap. "The Apollo Program was a worthy successor of the great exploring expeditions of mankind from the Phoenician voyagers to the Antarctic sledgers. And now we have an articulate tale of the moon venture from one of those whose footsteps have been left behind on our satellite. Reading this book is next best to having been there." -- Isaac Asimov Easton Press. Norwalk, CT. 1997. 373 pages. "Men From Earth" Buzz Aldrin. Signed Limited Edition of only 3,000. A collector's edition. A wonderful book published by Easton Press, luxuriously bound in full genuine leather. Includes the original Notes From the Editors along with a Certificate of Authenticity that is also signed and dated by Aldrin along with a witness. Condition: As New. Sealed. The condition is of the highest quality. Contains all the classic Easton Press qualities: * Premium Leather * Silk Moire Endleaves * Distinctive Cover Design * Hubbed Spine, Accented in Real 22KT Gold * Satin Ribbon Page Marker * Gilded Page Edges * Long-lasting, High Quality Acid-neutral Paper * Smyth-sewn Pages for Strength and Durability * Beautiful Illustrations About "Men From Earth" To coincide with the 20th anniversary this July of the first manned lunar landing, these books provide intimate accounts of how NASA accomplished the national goal of putting a man on the moon before the end of the decade. In his book, Aldrin, the second man on the moon, interweaves the story of U.S. and Soviet efforts to reach the moon with his first-hand experience flying both the Gemini and Apollo missions during the height of the space race. His recounting of his two space flights is compelling, especially the account of the nearly aborted Apollo 11 lunar landing. In contrast to Aldrin's astronaut's point of view, Murray and Cox's book tells the Apollo story through the eyes of the NASA managers who guided the men and machines from the early days of the Space Task Group to the Apollo lunar missions. The result is the best account to date of how the enormous program was successfully accomplished. Full of insiders' anecdotes, this book truly humanizes the lunar landing story that too often has been told only in technological and bureaucratic terms. Relying heavily on interviews with the people behind the scenes, the authors vividly capture the spirit of Apollo, its triumphs and tragedies, and its ultimate success. When considering the likely demand for Apollo histories surrounding the anniversary, Aldrin's account may be considered complementary to his Apollo 11 crew-mate Michael Collins's recent space history, Liftoff ( LJ 8/88). A review of Douglas MacKinnon and Joseph Baldanza's Footprints: The 12 Men Who Walked on the Moon Reflect on Their Flights, Their Lives and the Future , to be published by Acropolis in July, is scheduled to appear in our next issue.-- Ed. But for libraries considering only one title, Murray and Cox's book should be considered the essential purchase. - Thomas J. Frieling, Bainbridge Coll., Cal. Copyright 1989 Reed Business Information, Inc. About the author Edwin Eugene "Buzz" Aldrin, Jr. (born January 20, 1930) is an American astronaut, and the second person to walk on the Moon. He was the lunar module pilot on Apollo 11, the first manned lunar landing in history. On July 20, 1969, he set foot on the Moon, following mission commander Neil Armstrong. He is also a retired United States Air Force pilot.
VERY FINE GUARANTEED