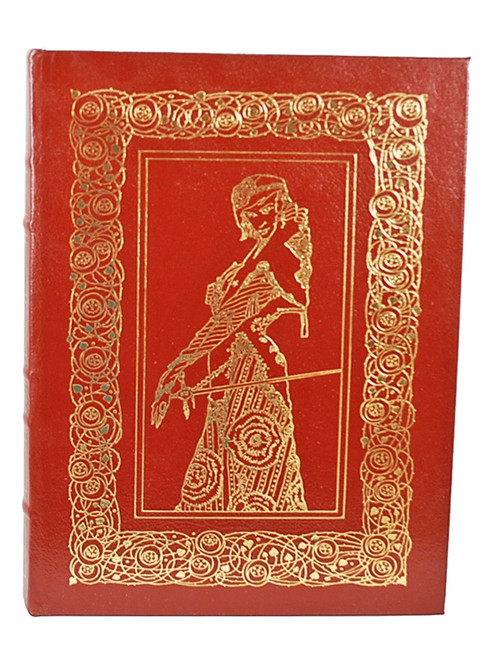 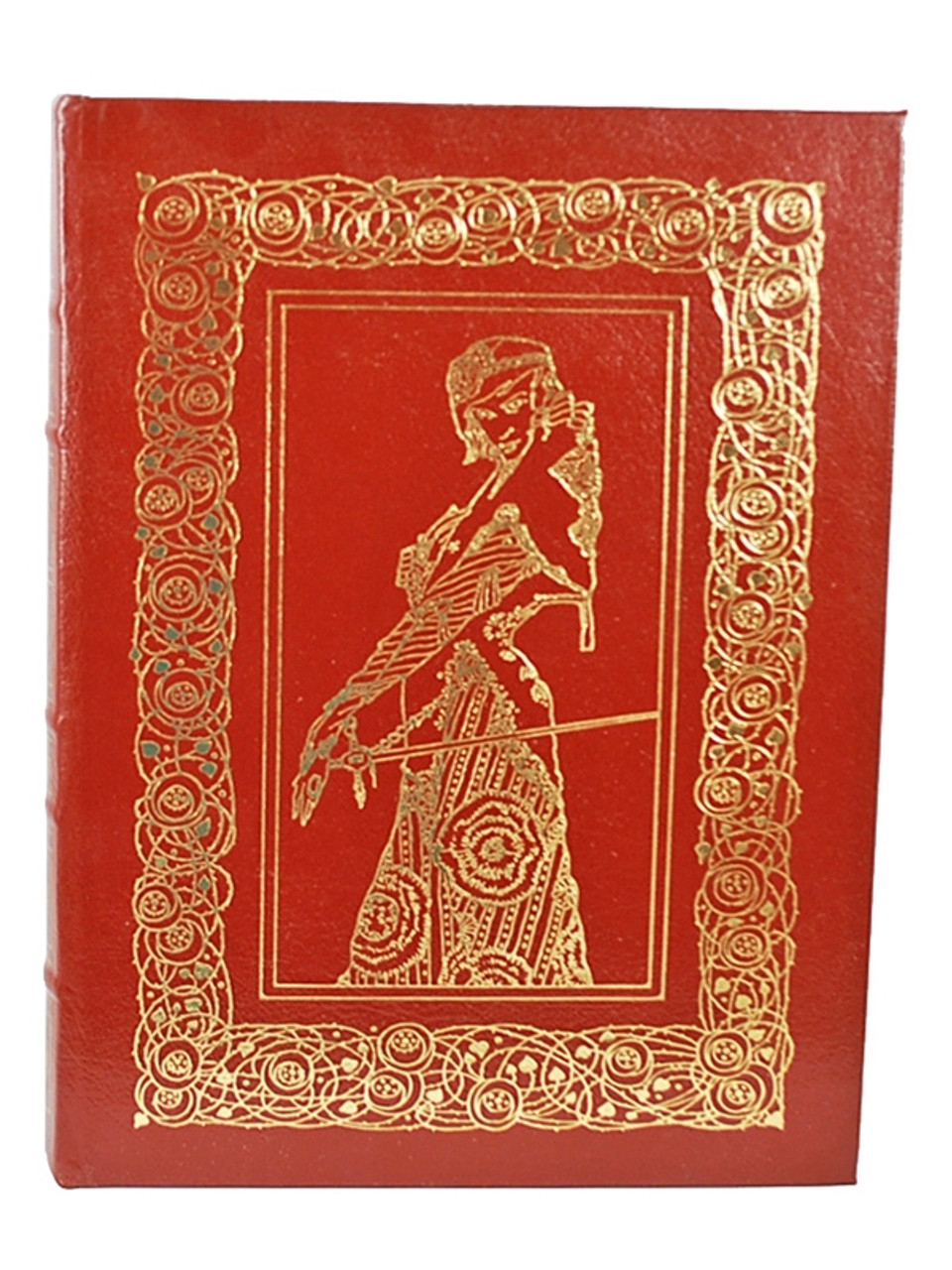 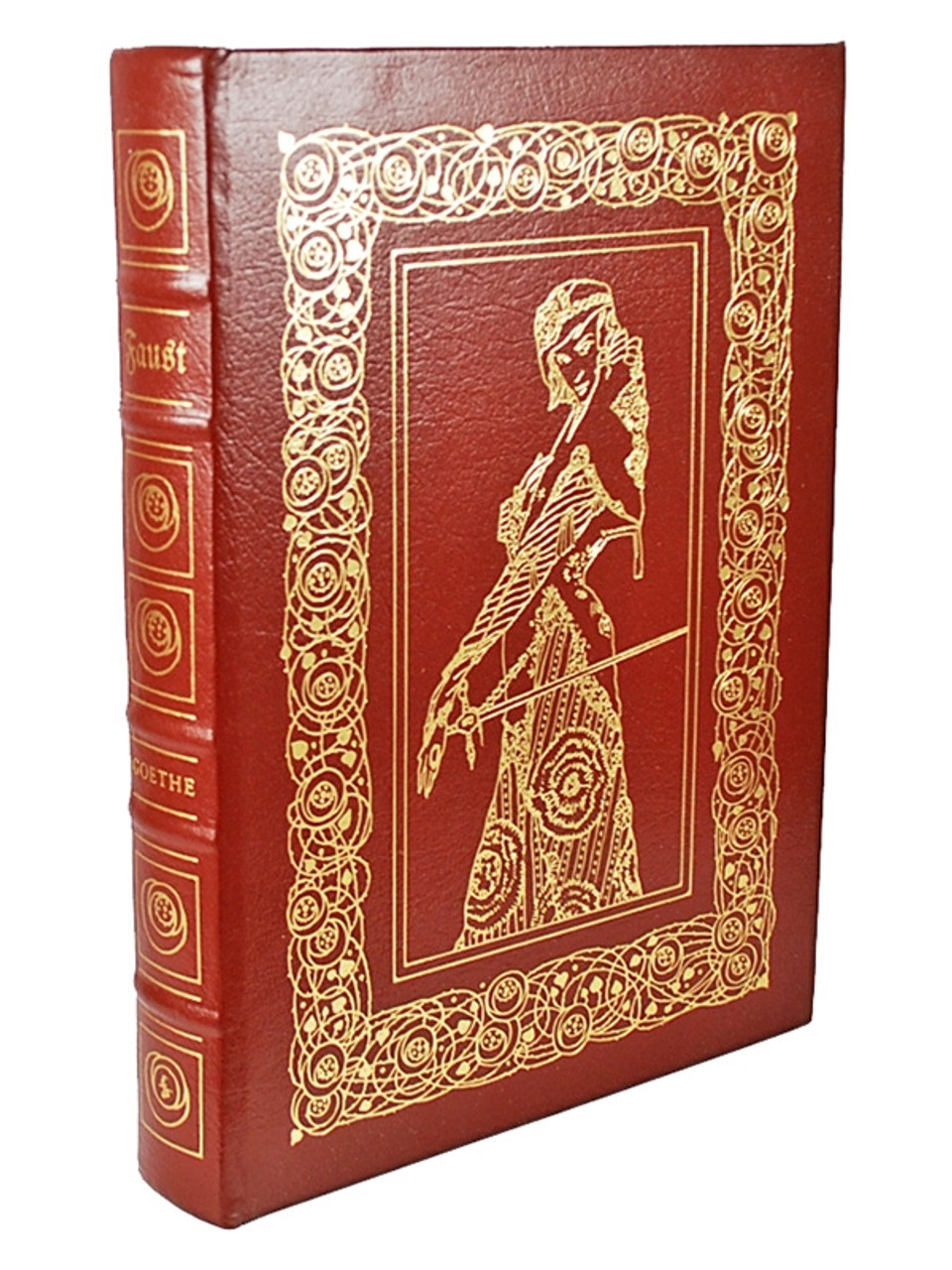 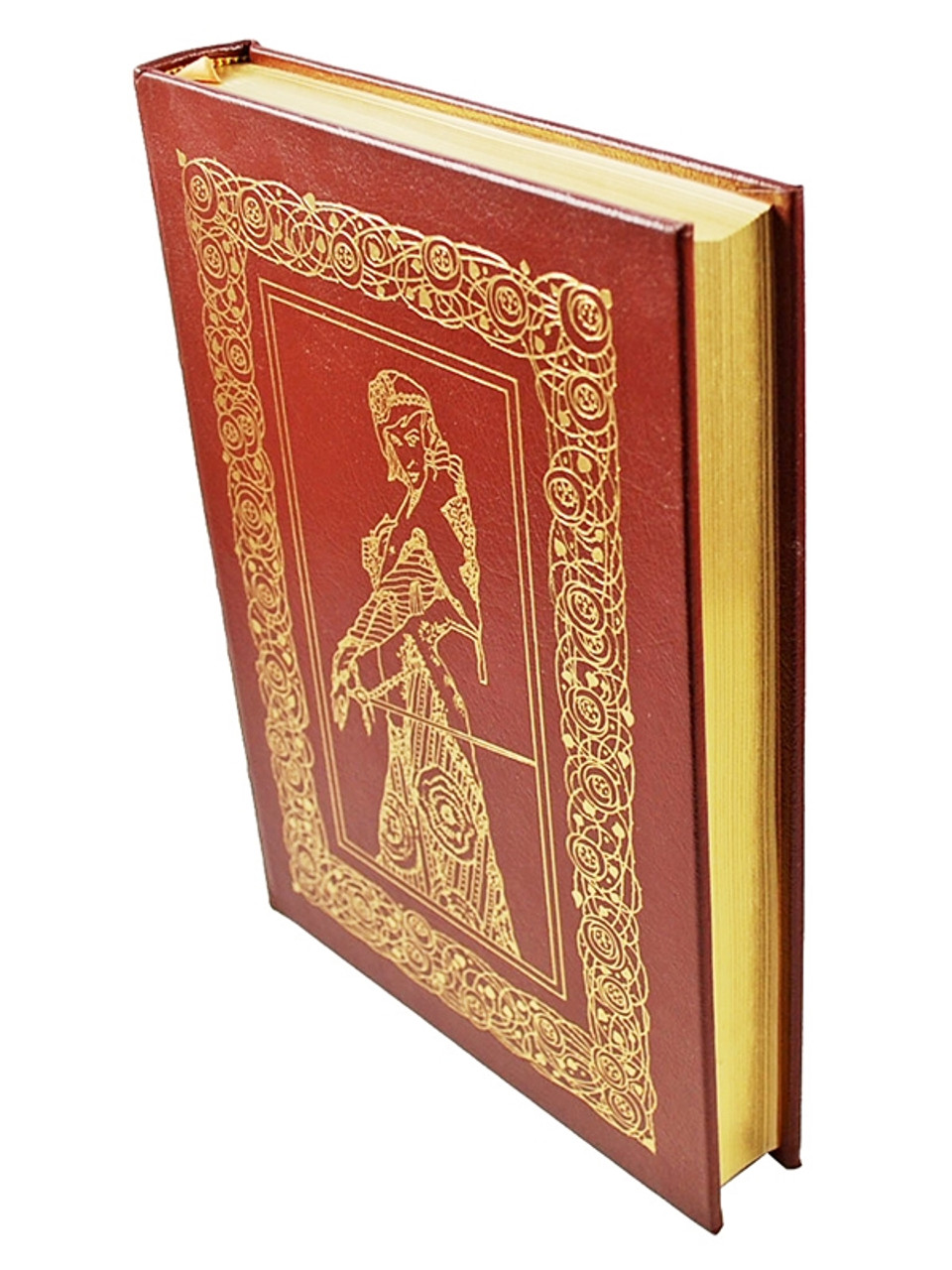 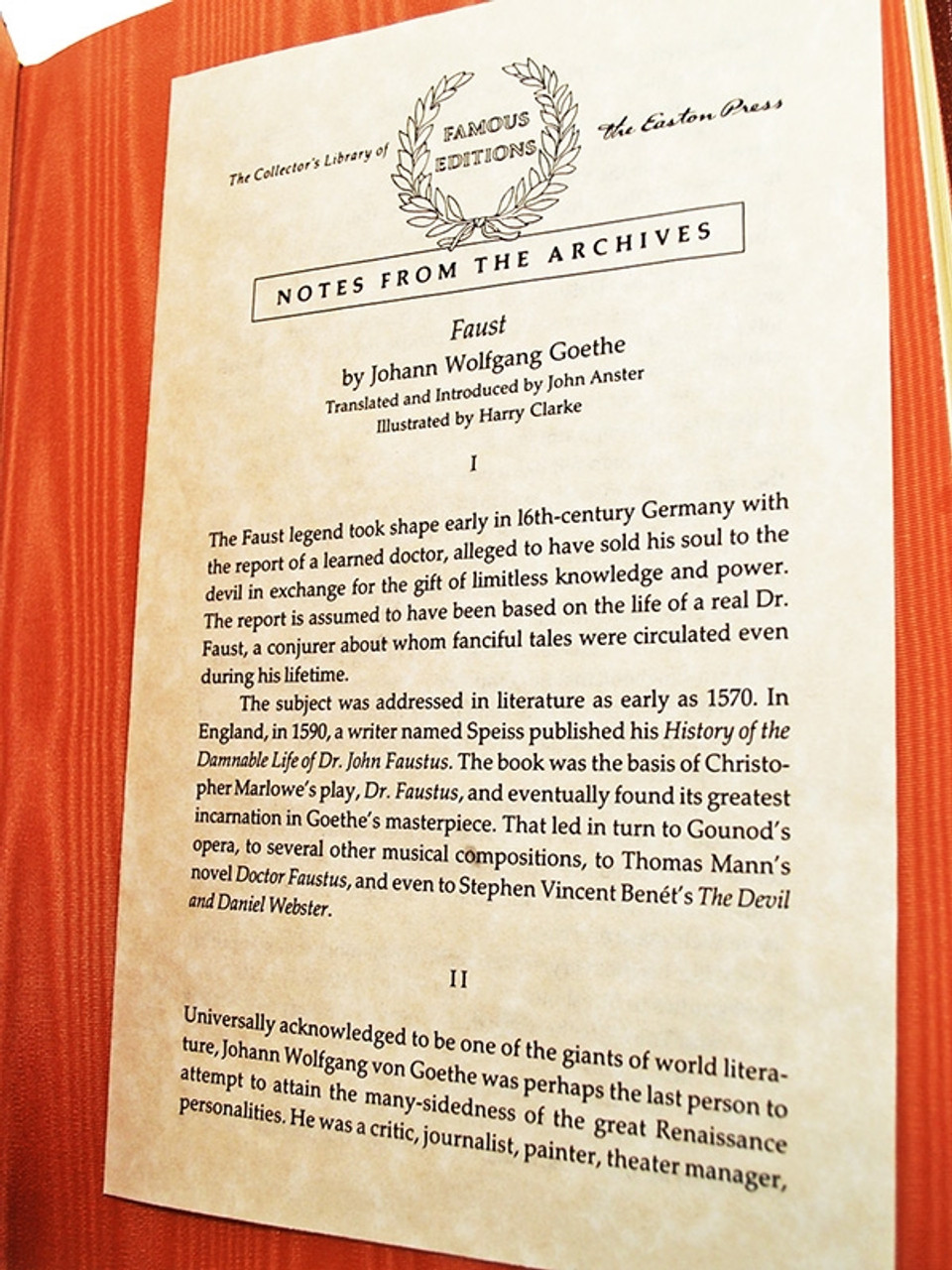 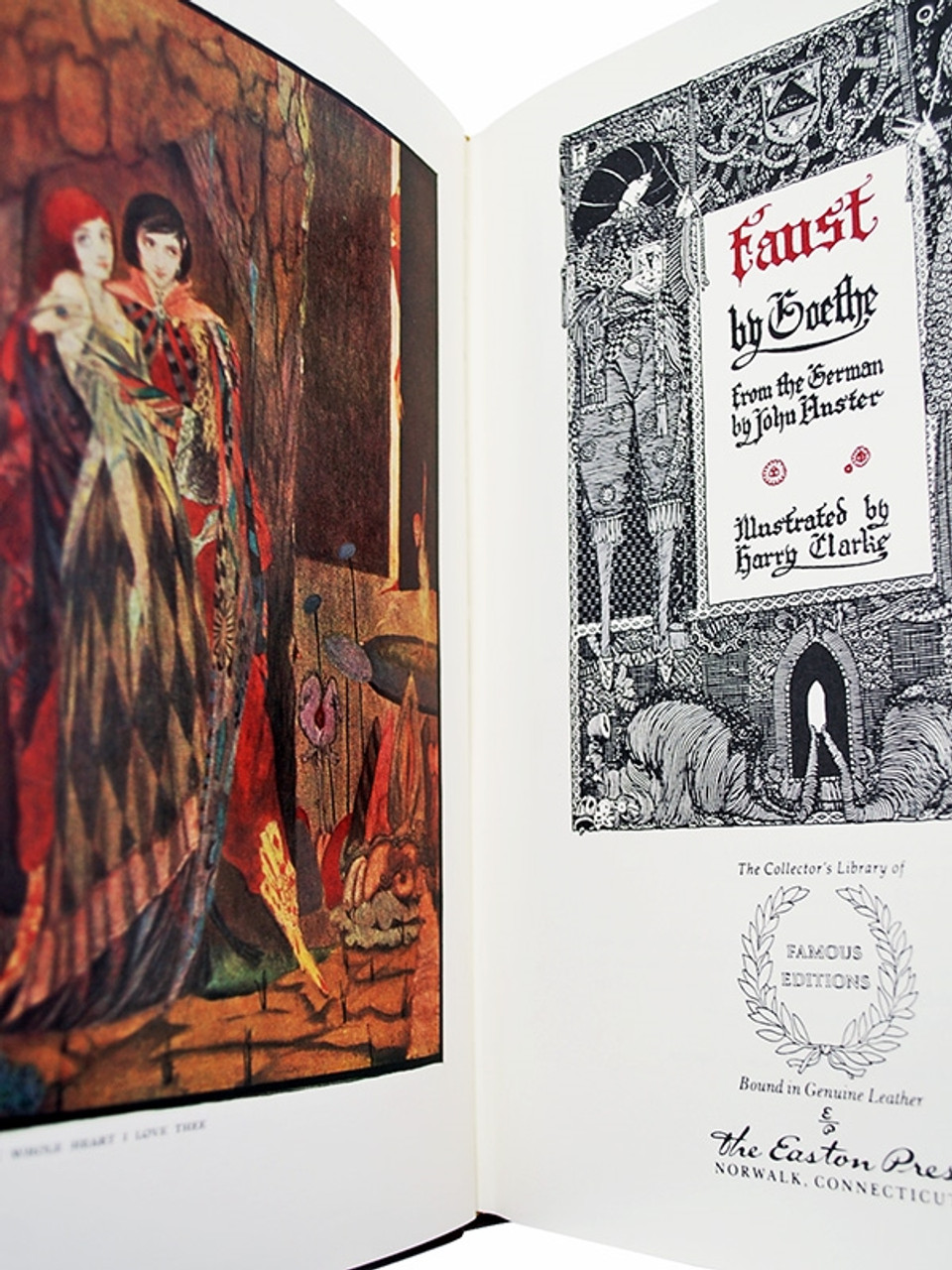 Easton Press, Norwalk CT. 2001 Johann Wolfgang von Goethe "Faust" Limited Edition. The Collector's Library of Famous Editions. A rare edition for the collector. This is the version of the book that is uncommon.

Johann Wolfgang von Goethe (1749-1832), German poet, playwright, novelist, and natural philosopher is best known for his two-part poetic drama Faust, (1808-1832) which he started around the age of twenty three and didn't finish till shortly before his death sixty years later. He is considered one of the greatest contributors of the German Romantic period.


Goethe's early years of education were inconsistent; informally from his father and then with tutors. However, he managed a grasp of Greek, Latin, French, and Italian by the age of eight, and his mother taught him well in the art of story-telling. At the age of sixteen, in 1765, Goethe went to Leipzig University to study law as his father wished, though he also gained much recognition from the Rococo poems and lyric he wrote during this period. In 1766 he fell in love with Anne Catharina Schoenkopf (1746-1810) and wrote his joyfully exuberant collection of poems Annette.

Ye wavering shapes, again ye do enfold me, As erst upon my troubled sight ye stole; Shall I this time attempt to clasp, to hold ye? Still for the fond illusion yearns my soul? Ye press around! Come then, your captive hold me, As upward from the vapoury mist ye roll; Within my breast youth's throbbing pulse is bounding, Fann'd by the magic breath your march surrounding.

Shades fondly loved appear, your train attending, And visions fair of many a blissful day; First-love and friendship their fond accents blending, Like to some ancient, half-expiring lay; Sorrow revives, her wail of anguish sending Back o'er life's devious labyrinthine way, And names the dear ones, they whom Fate bereaving Of life's fair hours, left me behind them grieving.

They hear me not my later cadence singing, The souls to whom my earlier lays I sang; Dispersed the throng, their severed flight now winging; Mute are the voices that responsive rang. For stranger crowds the Orphean lyre now stringing, E'en their applause is to my heart a pang; Of old who listened to my song, glad hearted, If yet they live, now wander widely parted.

VERY NEAR FINE with just a touch of rubbing to one area of the gilded page edges. A wonderful bright clean copy free of any markings, writings, or stamps. Sharp corners that are not bumped. Tight and square spine. Unread book. No attached bookplates or indication of any removed.