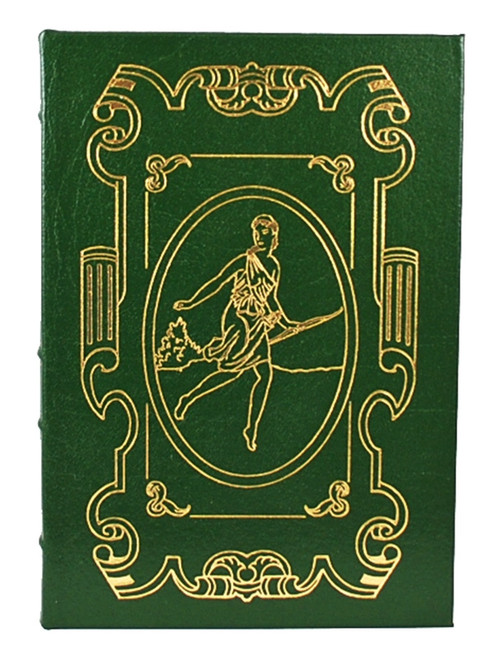 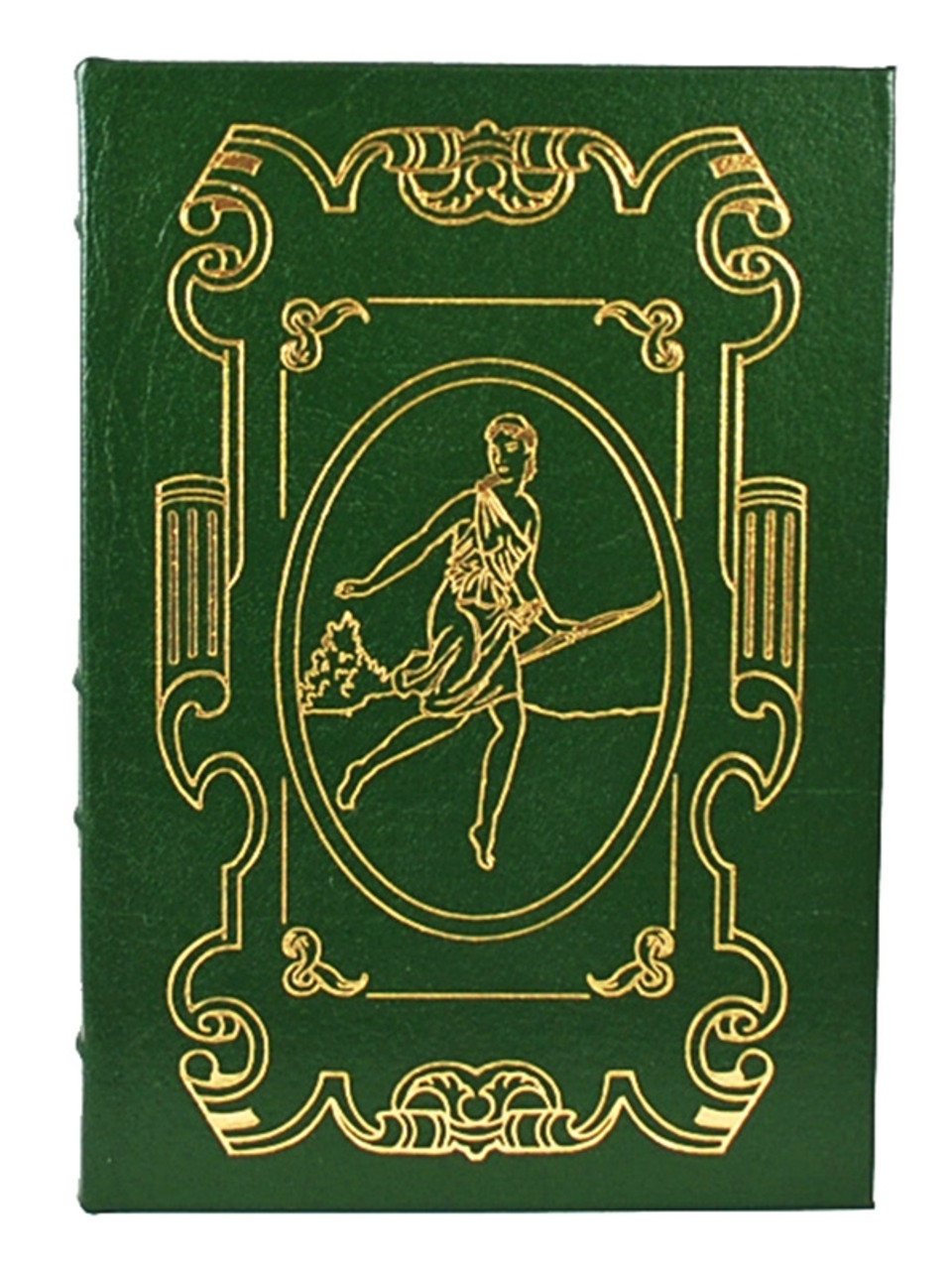 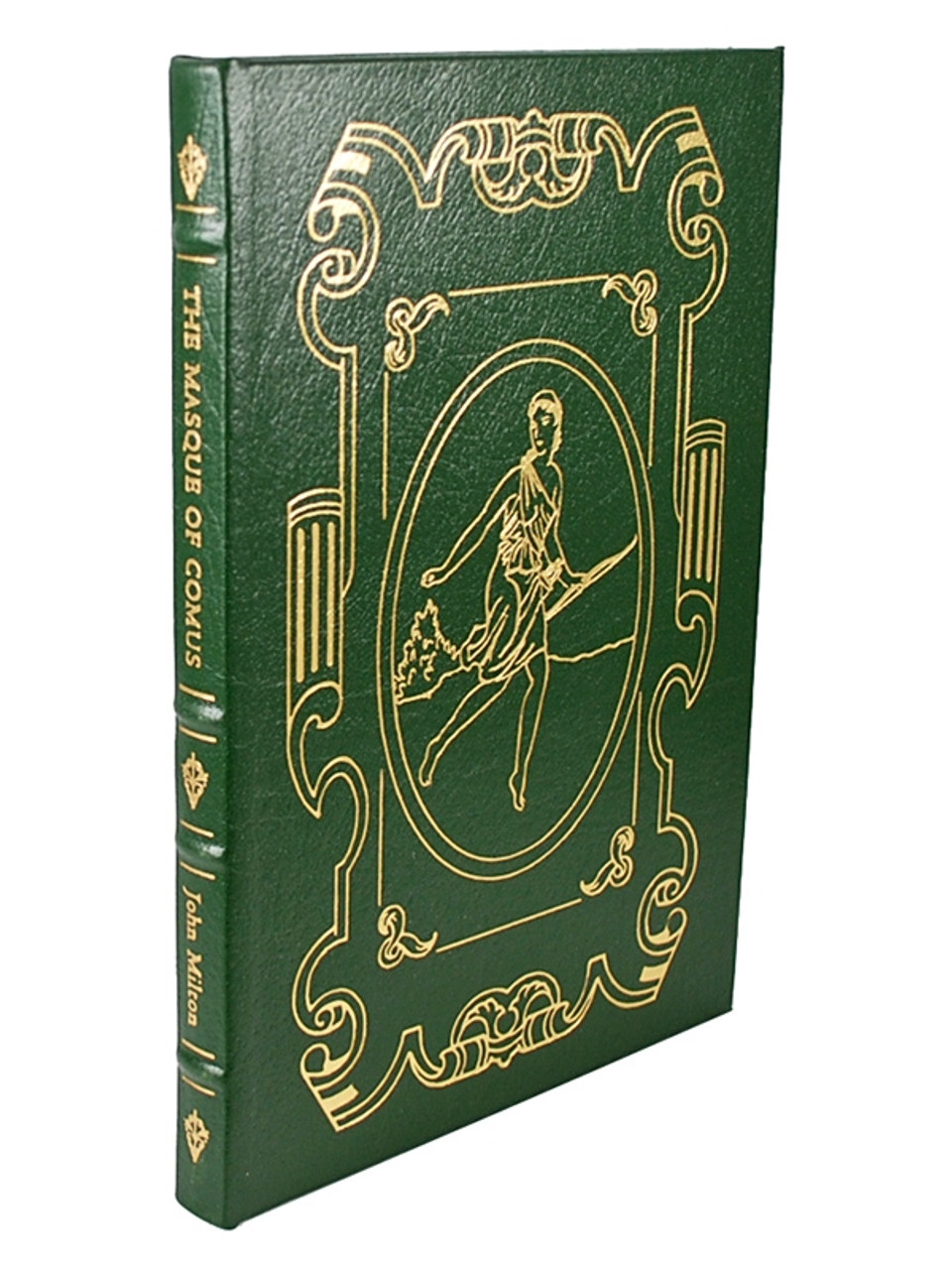 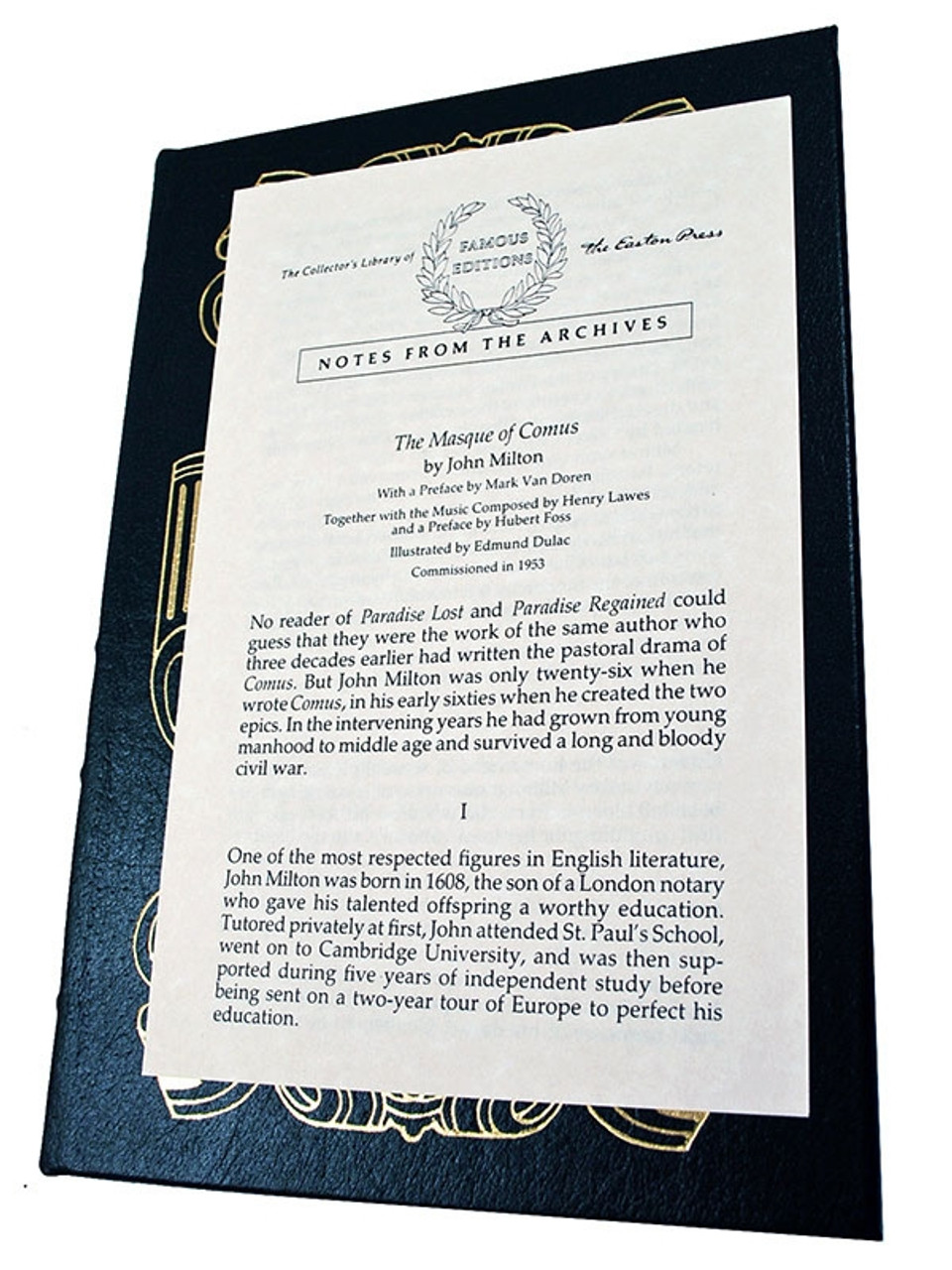 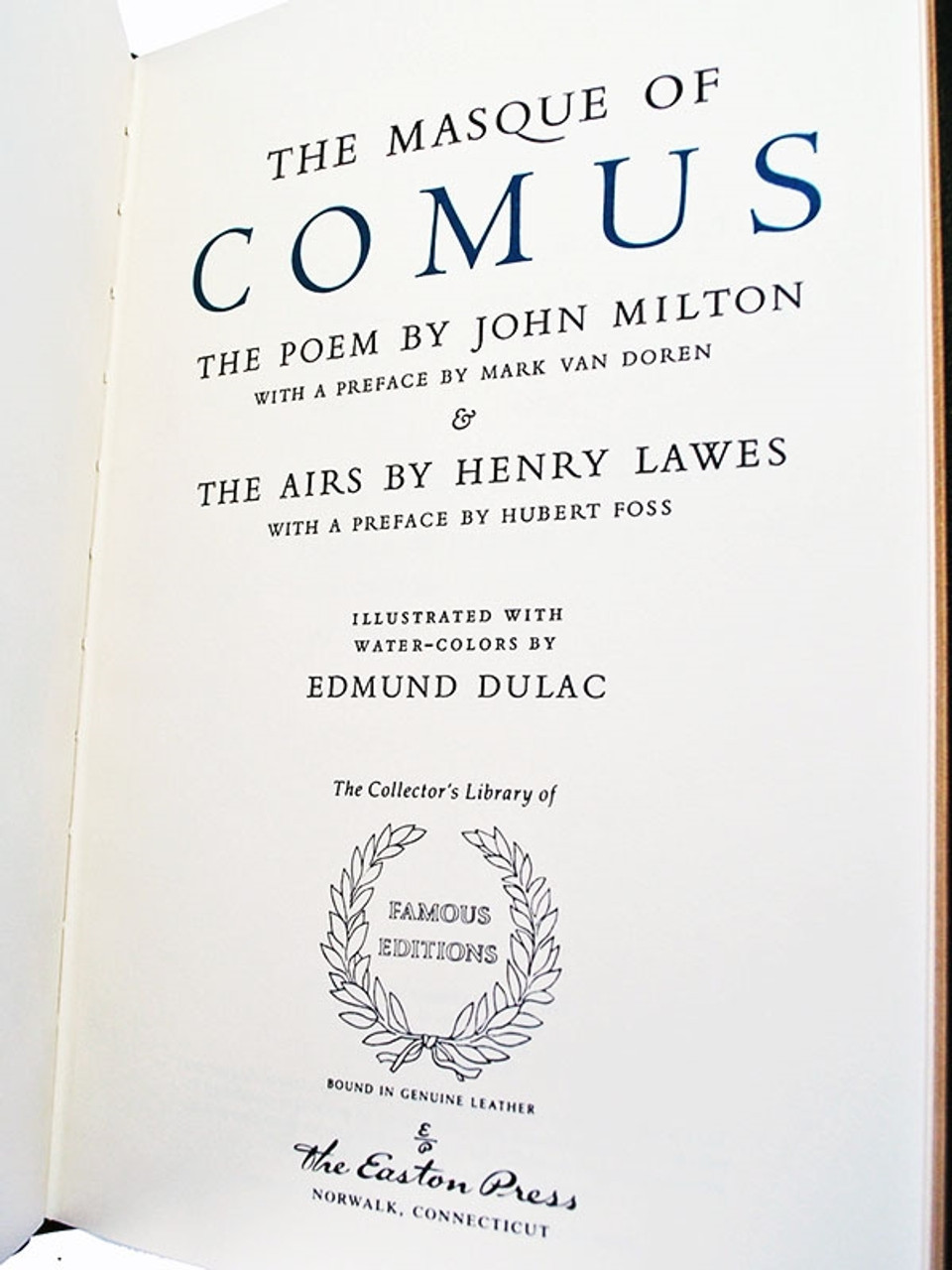 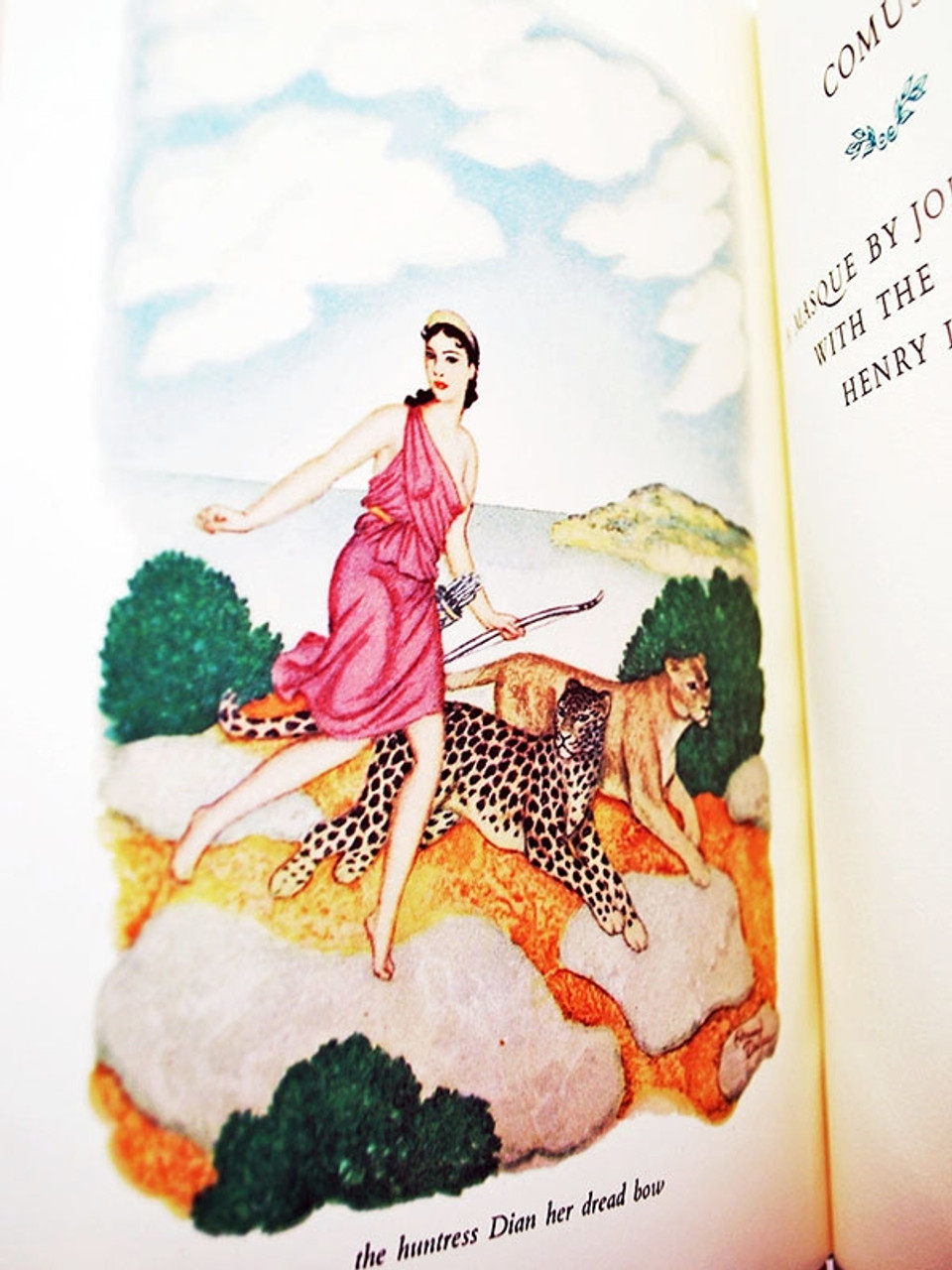 John Milton is best known for Paradise Lost, widely regarded as the greatest epic poem in English. Together with Paradise Regained, it formed his reputation as one of the greatest English poets. In his prose works he advocated the abolition of the Church of England. His influence extended not only through the civil wars and interregnum but also to the American and French revolutions.
Few poems have been more variously designated than Comus.

Milton himself describes it simply as "A Mask"; by others it has been criticised and estimated as a lyrical drama, a drama in the epic style, a lyric poem in the form of a play, a phantasy, an allegory, a philosophical poem, a suite of speeches or majestic soliloquies, and even a didactic poem. Such variety in the description of the poem is explained partly by its complex charm and many-sided interest, and partly by the desire to describe it from that point of view which should best reconcile its literary form with what we know of the genius and powers of its author. Those who, like Dr. Johnson, have blamed it as a drama, have admired it "as a series of lines," or as a lyric; one writer, who has found that its characters are nothing, its sentiments tedious, its story uninteresting, has nevertheless "doubted whether there will ever be any similar poem which gives so true a conception of the capacity and the dignity of the mind by which it was produced" (Bagehot's Literary Studies). Some who have praised it as an allegory see in it a satire on the evils both of the Church and of the State, while others regard it as alluding to the vices of the Court alone.

Some have found its lyrical parts the best, while others, charmed with its "divine philosophy," have commended those deep conceits which place it alongside of the Faerie Queen, as shadowing forth an episode in the education of a noble soul and as a poet's lesson against intemperance and impurity. But no one can refuse to admit that, more than any other of Milton's shorter poems, it gives us an insight into the peculiar genius and character of its author: it was, in the opinion of Hallam, "sufficient to convince any one of taste and feeling that a great poet had arisen in England, and one partly formed in a different school from his contemporaries." It is true that in the early poems we do not find the whole of Milton, for he had yet to pass through many years of trouble and controversy; but Comus, in a special degree, reveals or foreshadows much of the Milton of Paradise Lost. Whether we regard its place in Milton's life, in the series of his works, or in English literature as a whole, the poem is full of significance: it is worth while, therefore, to consider how its form was determined by the external circumstances and previous training of the poet; by his favourite studies in poetry, philosophy, history, and music; and by his noble theory of life in general, and of a poet's life in particular.