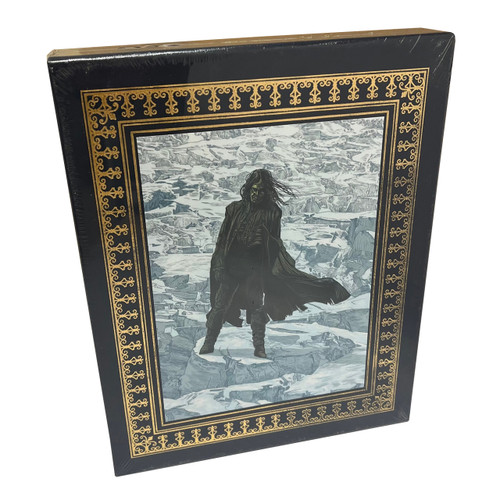 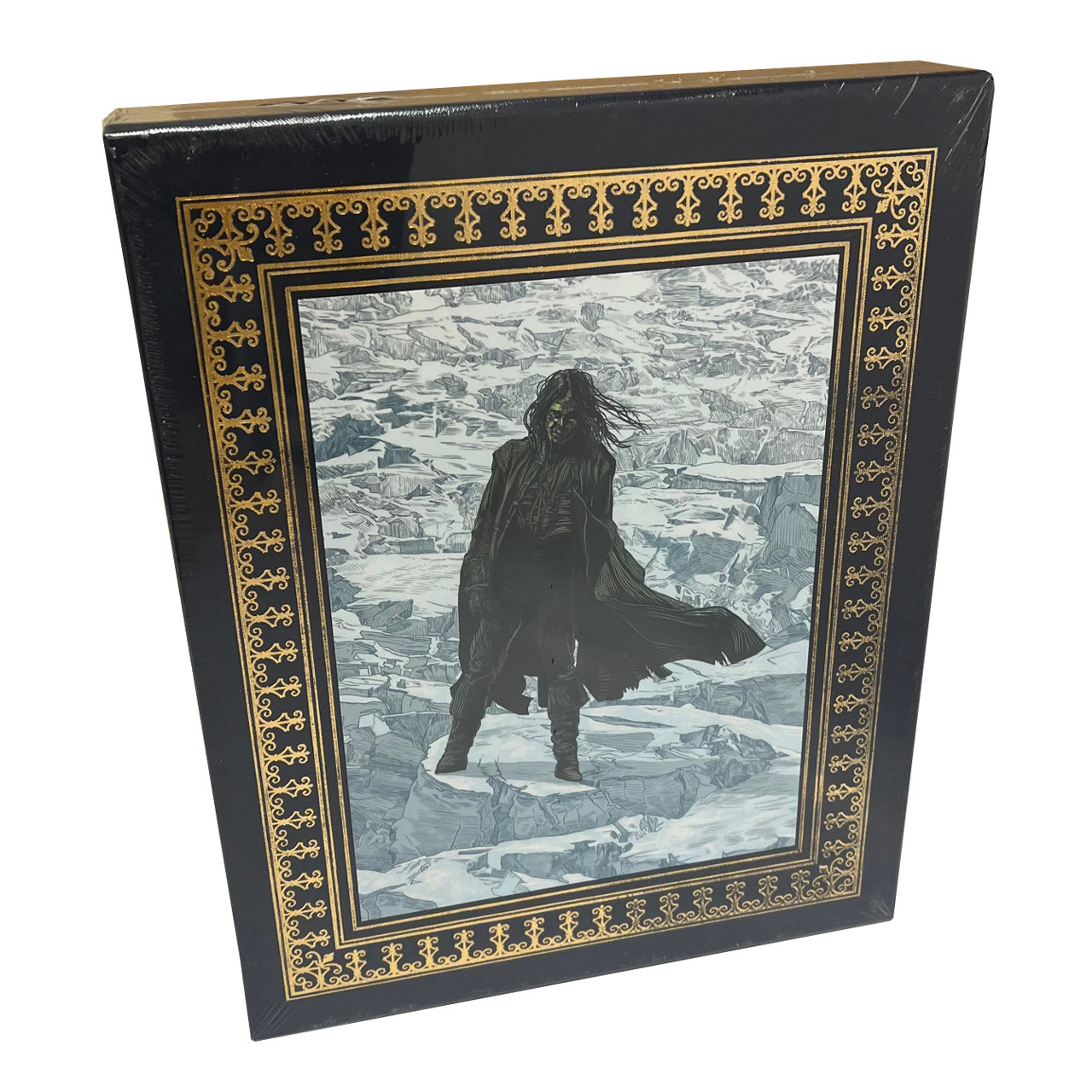 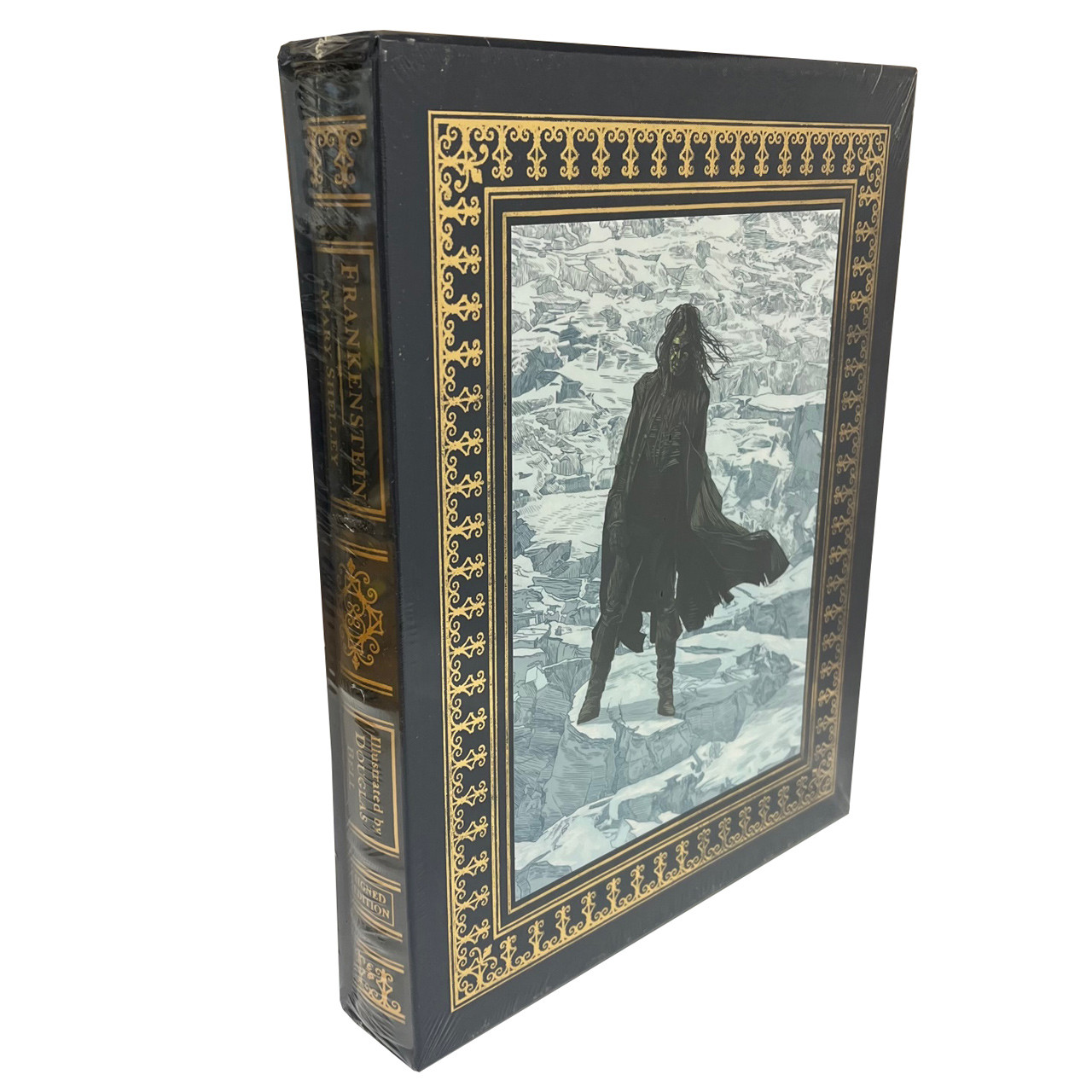 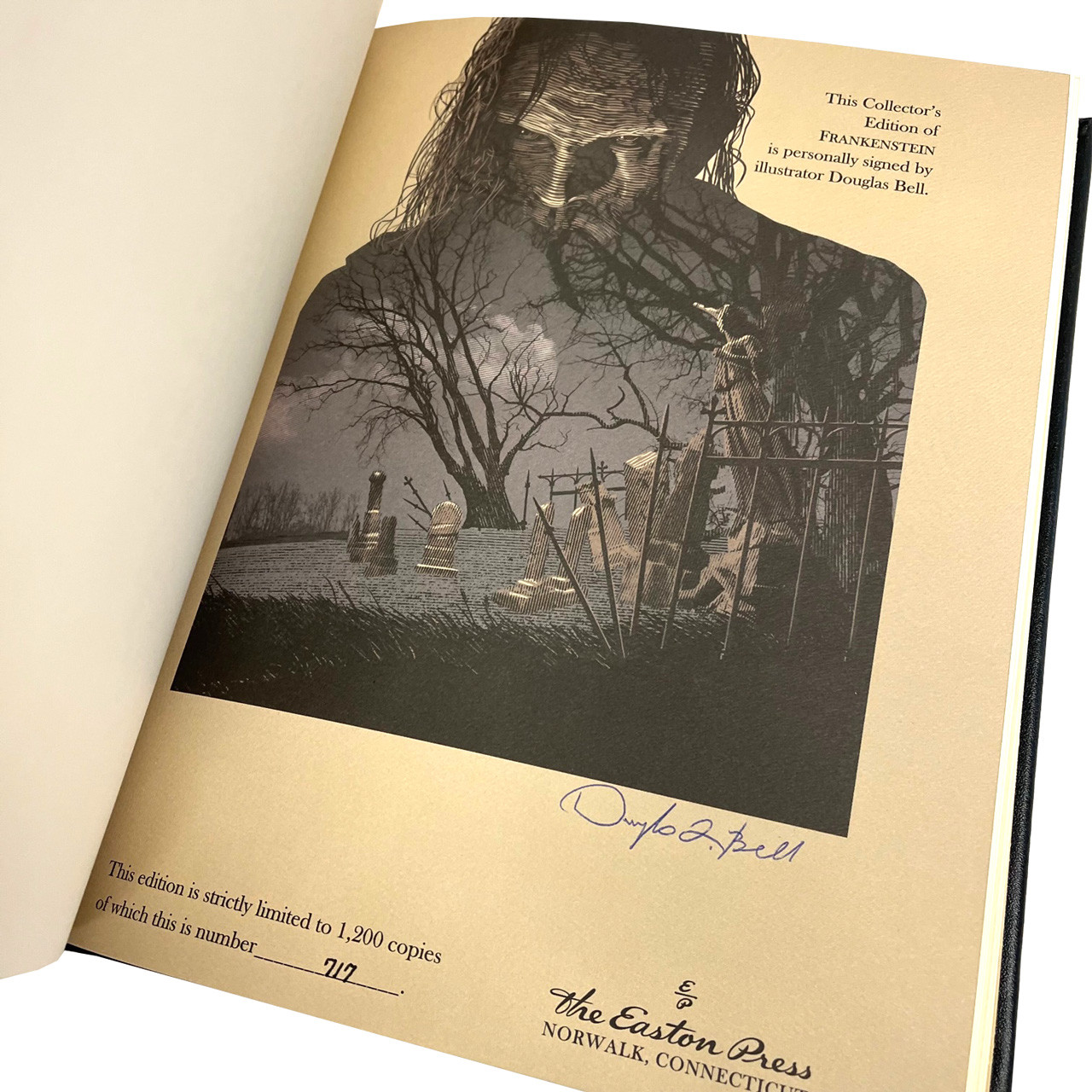 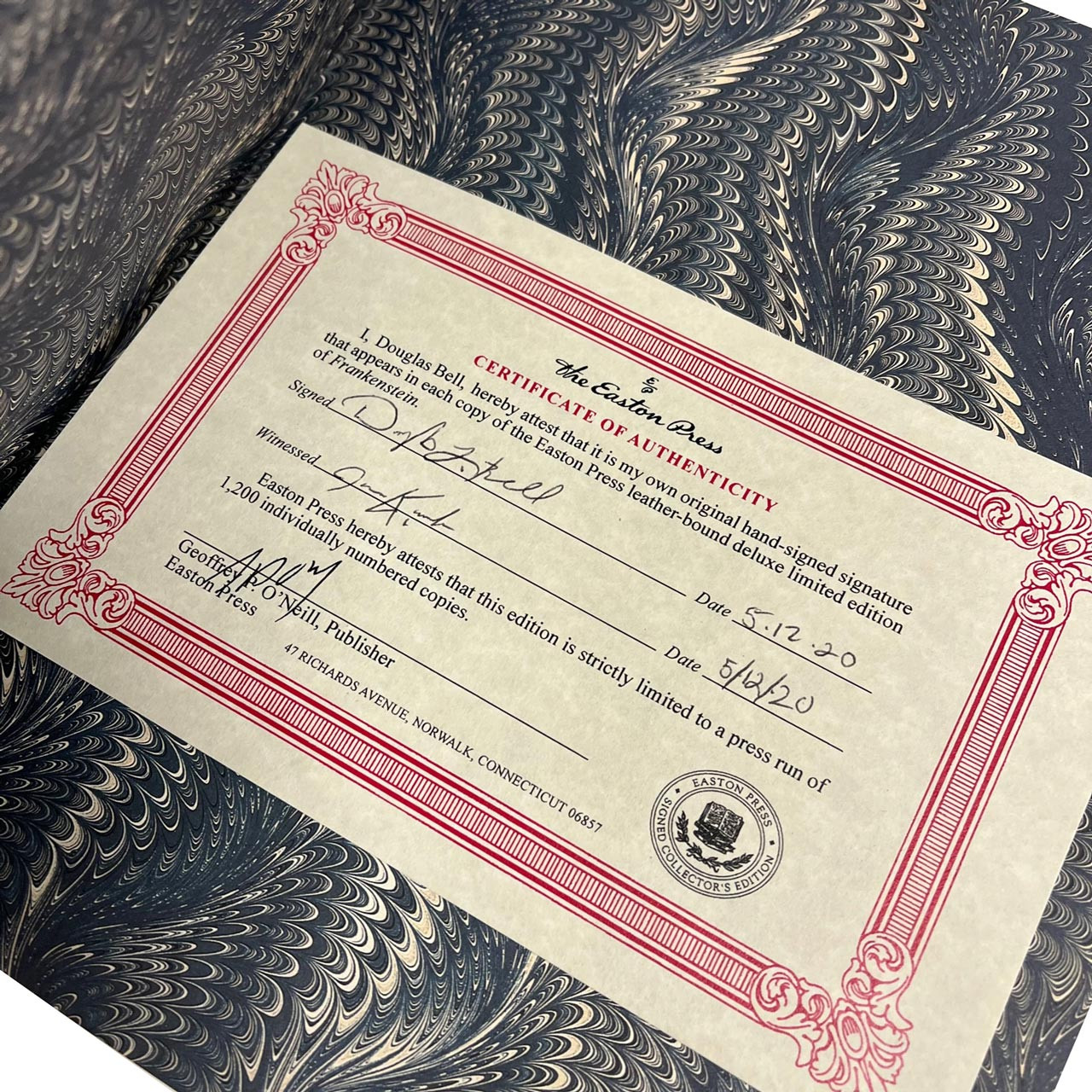 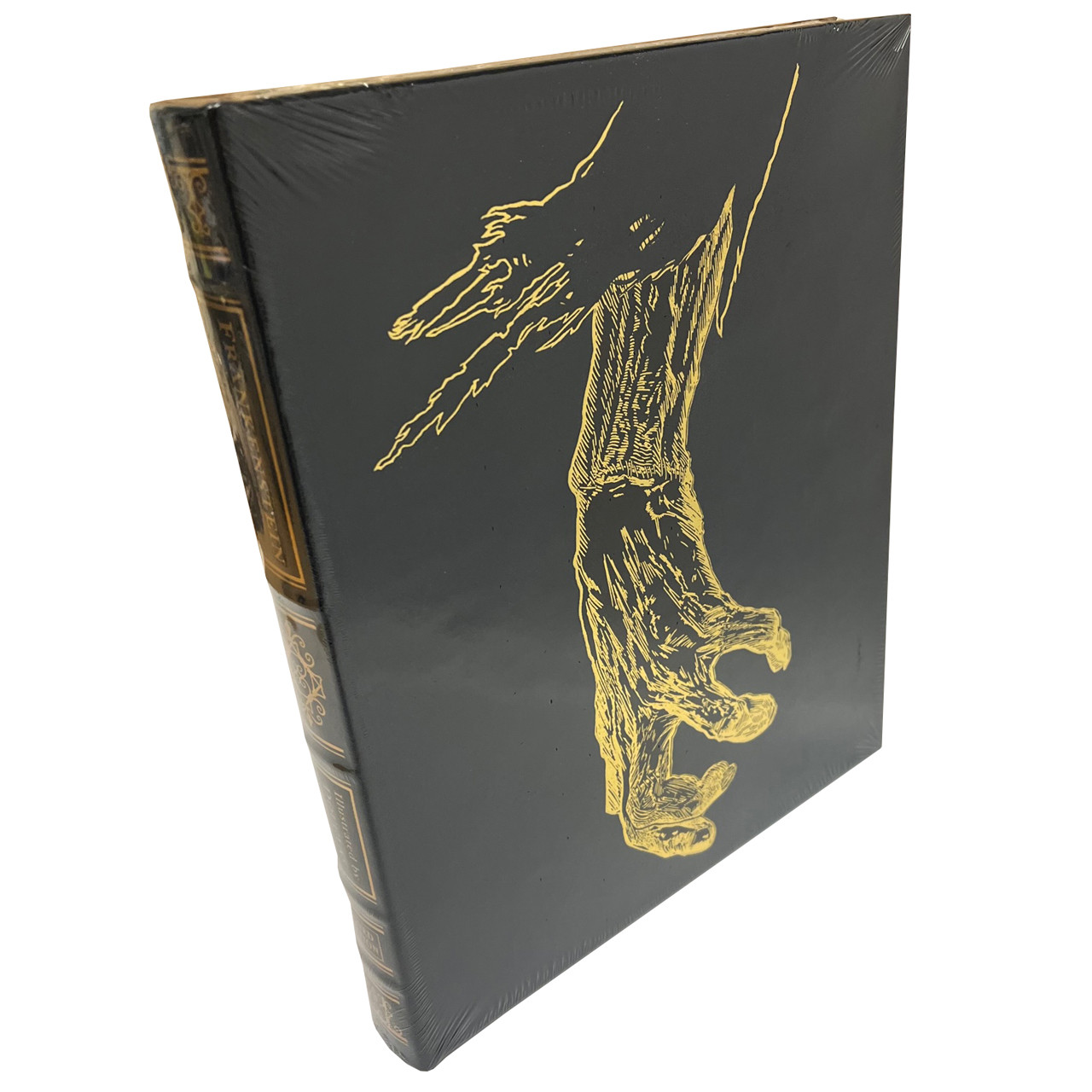 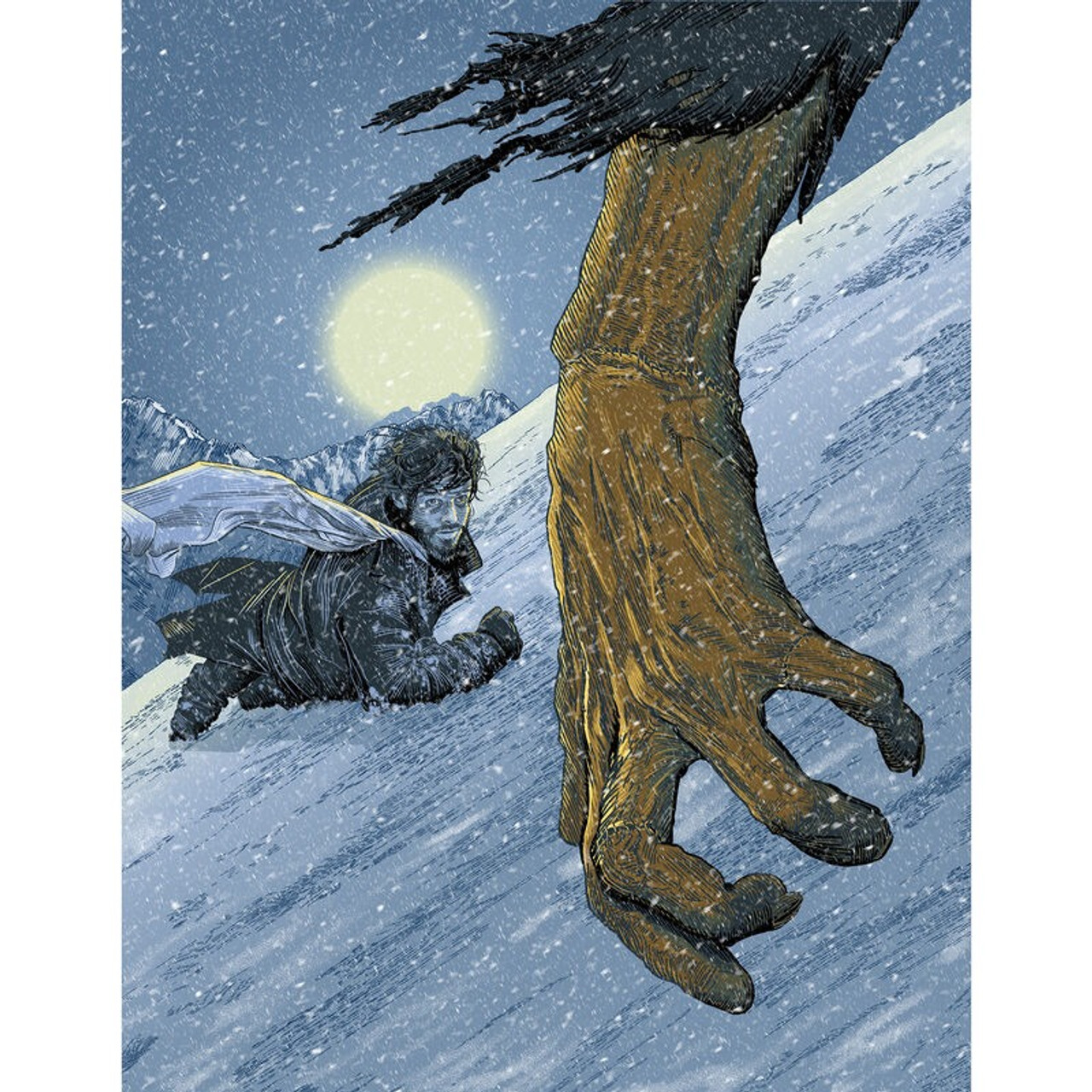 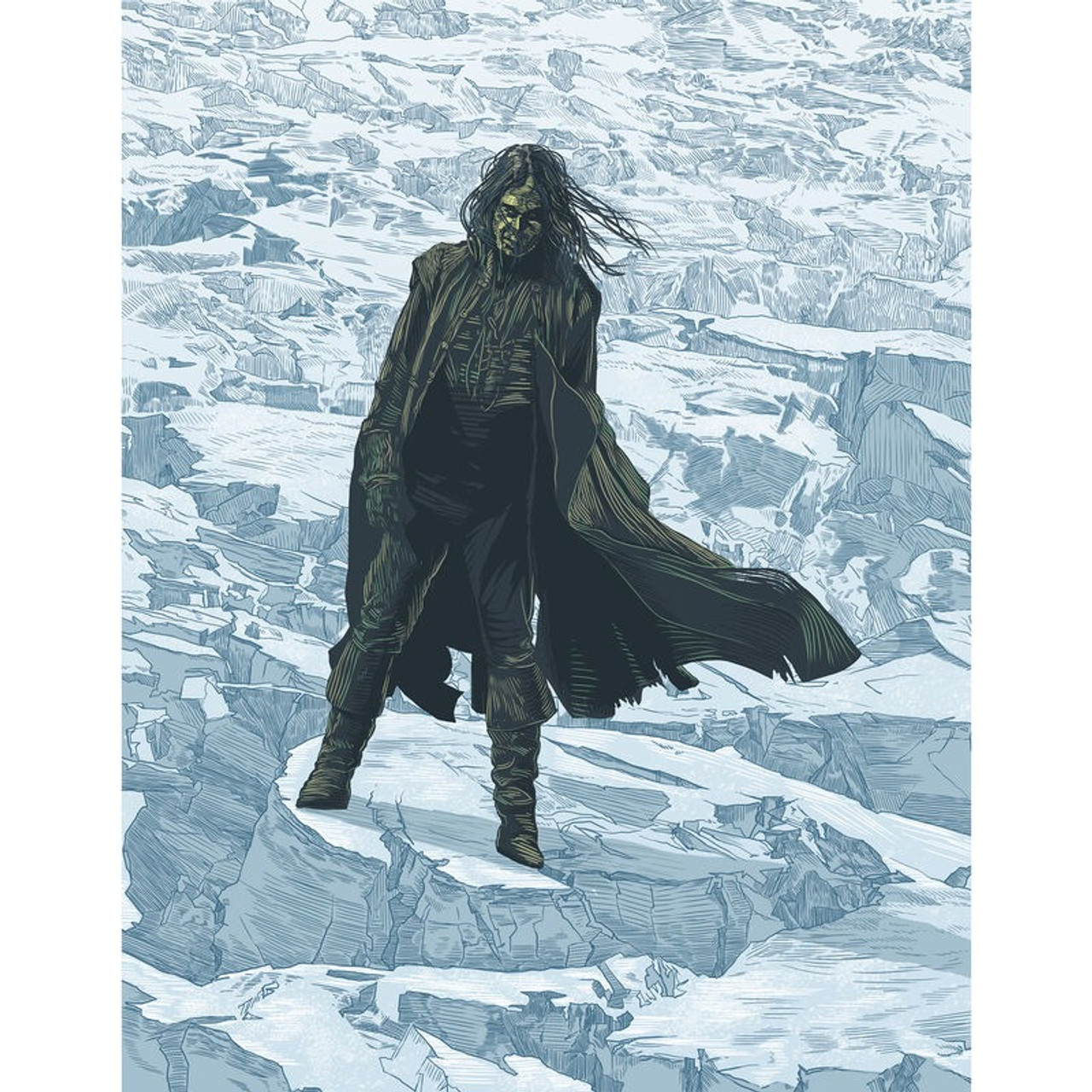 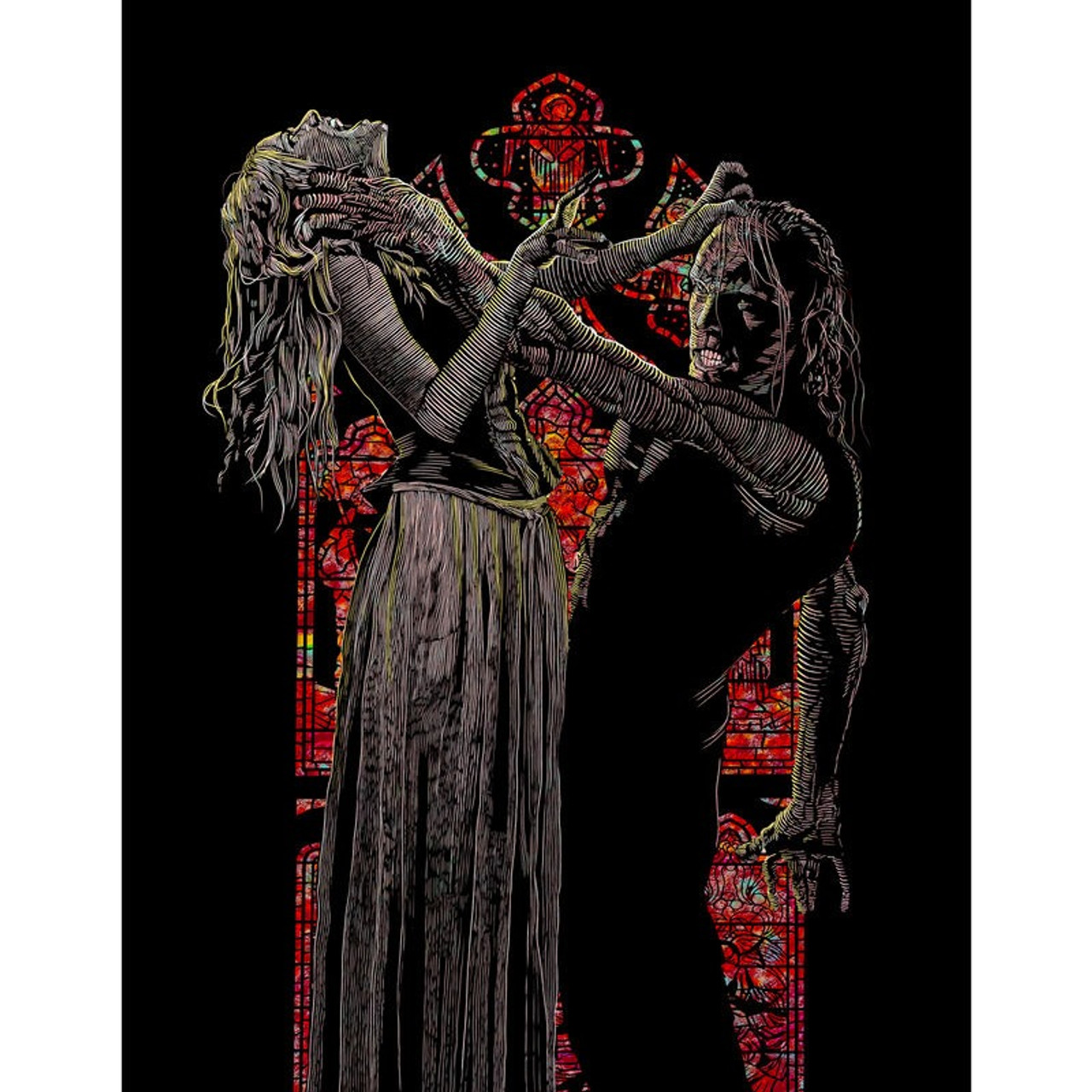 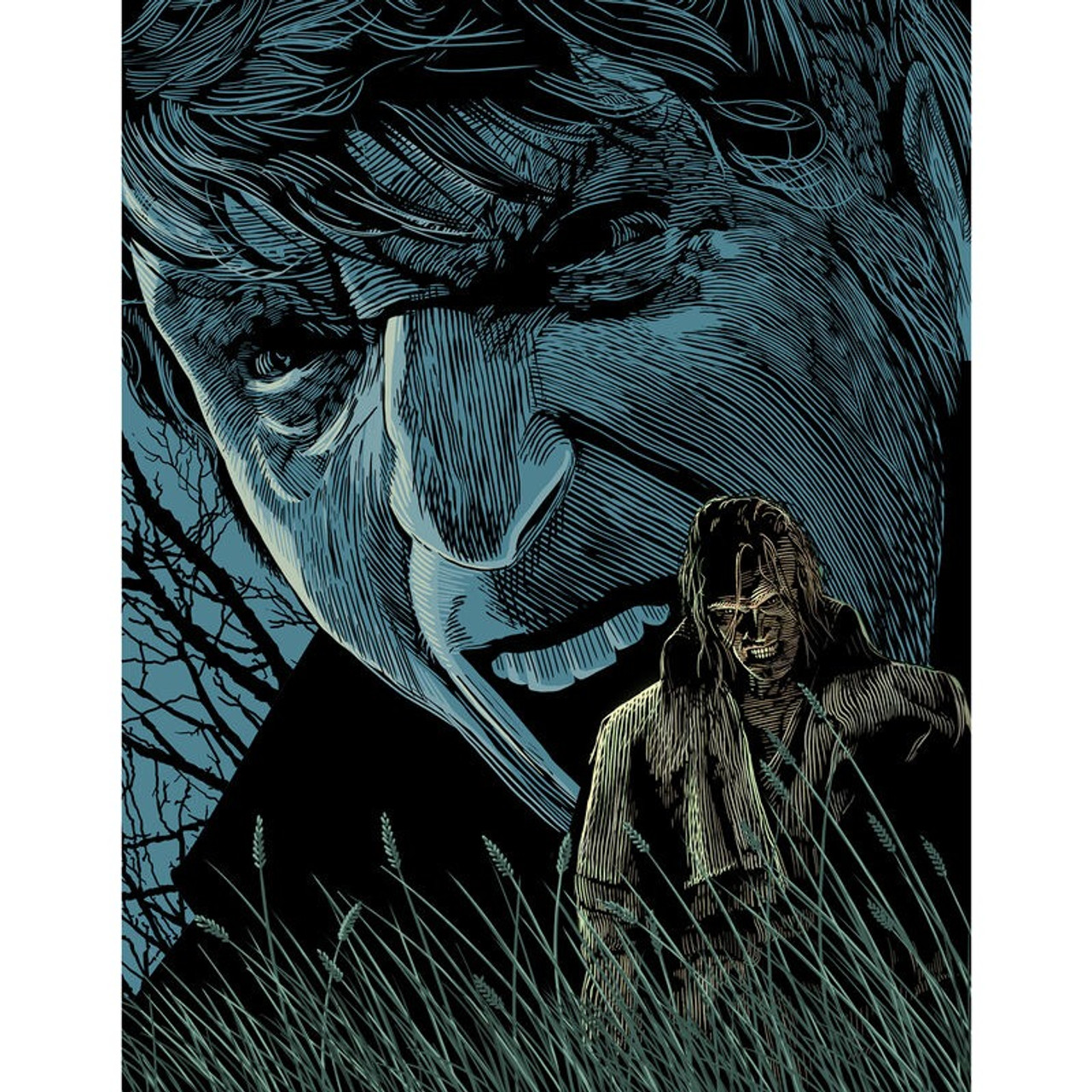 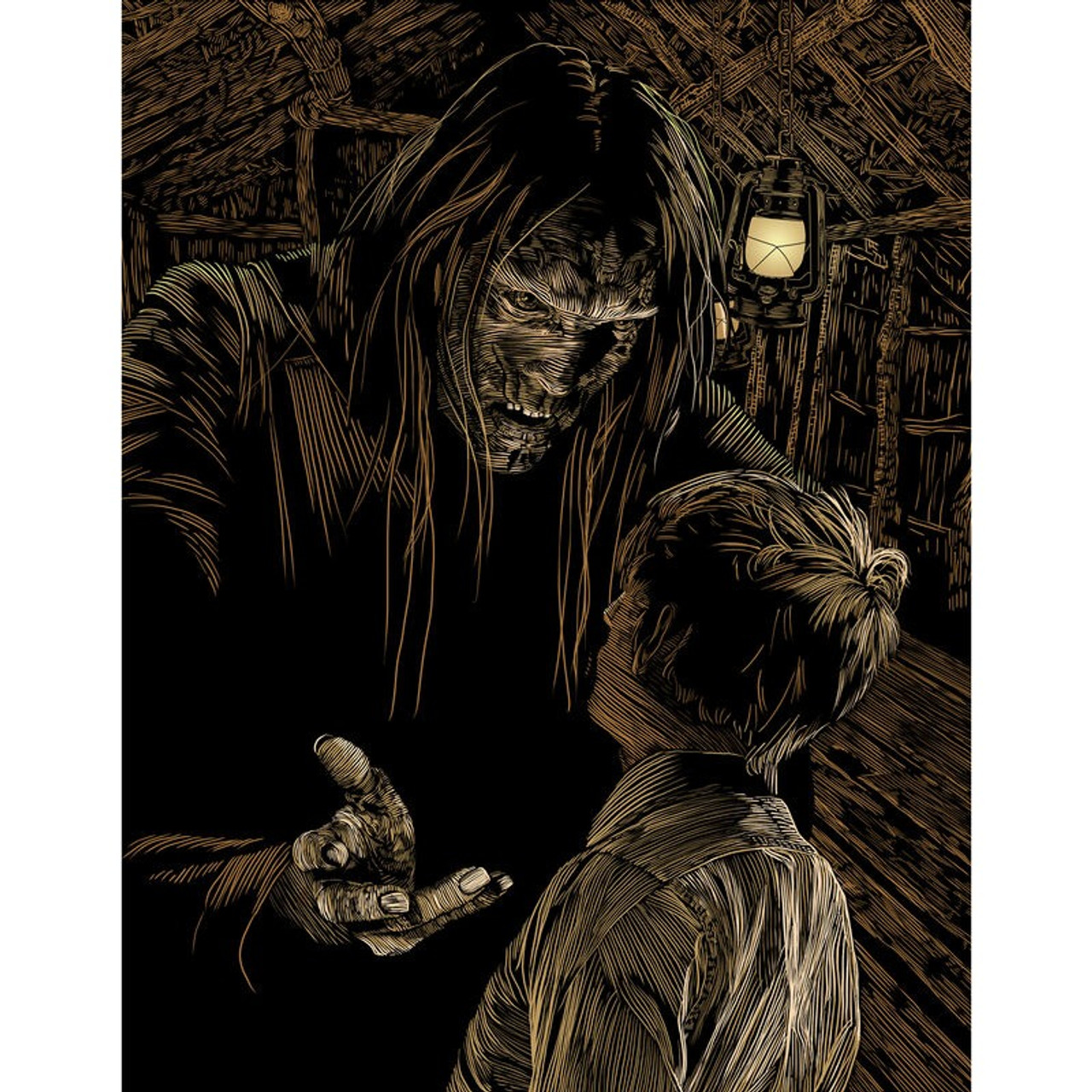 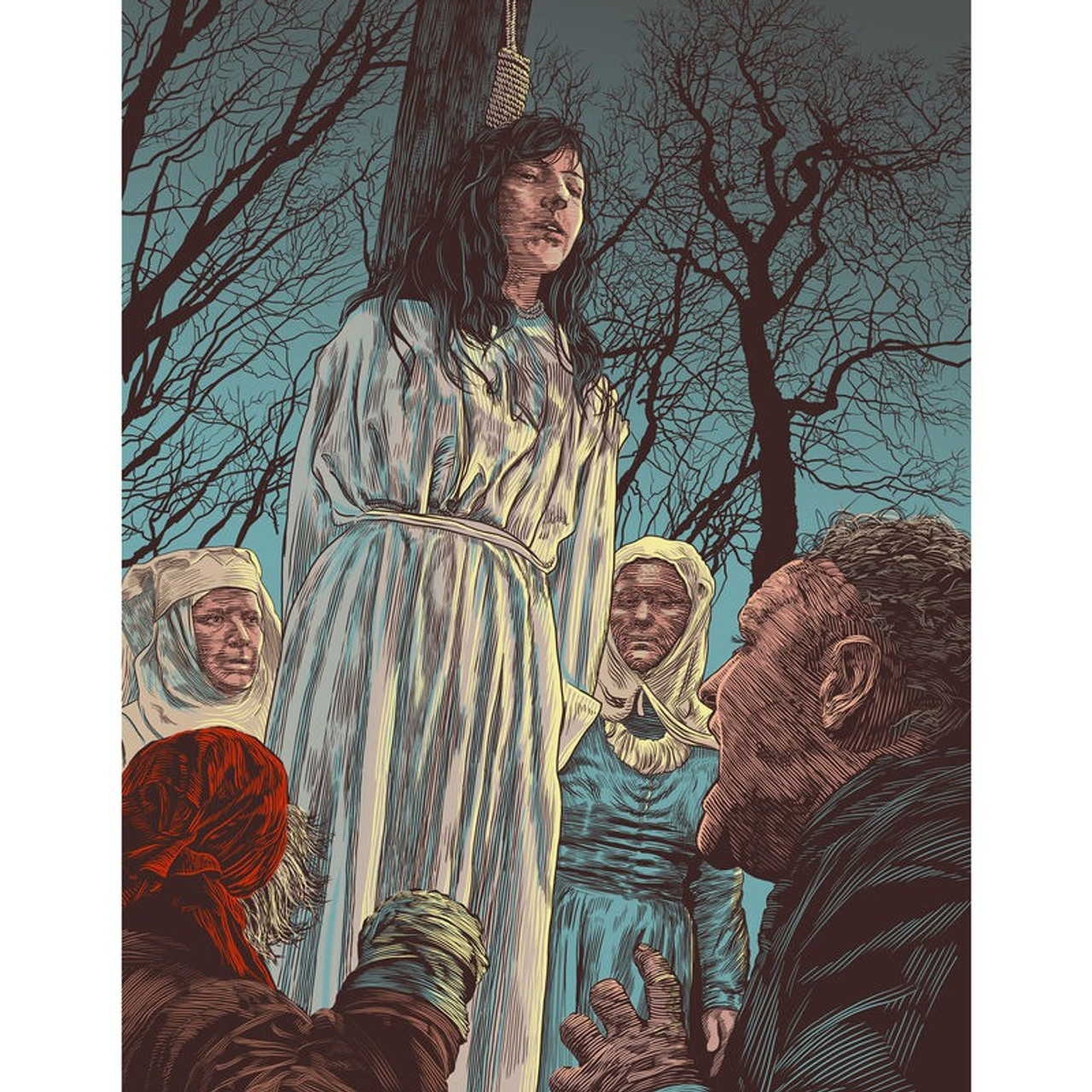 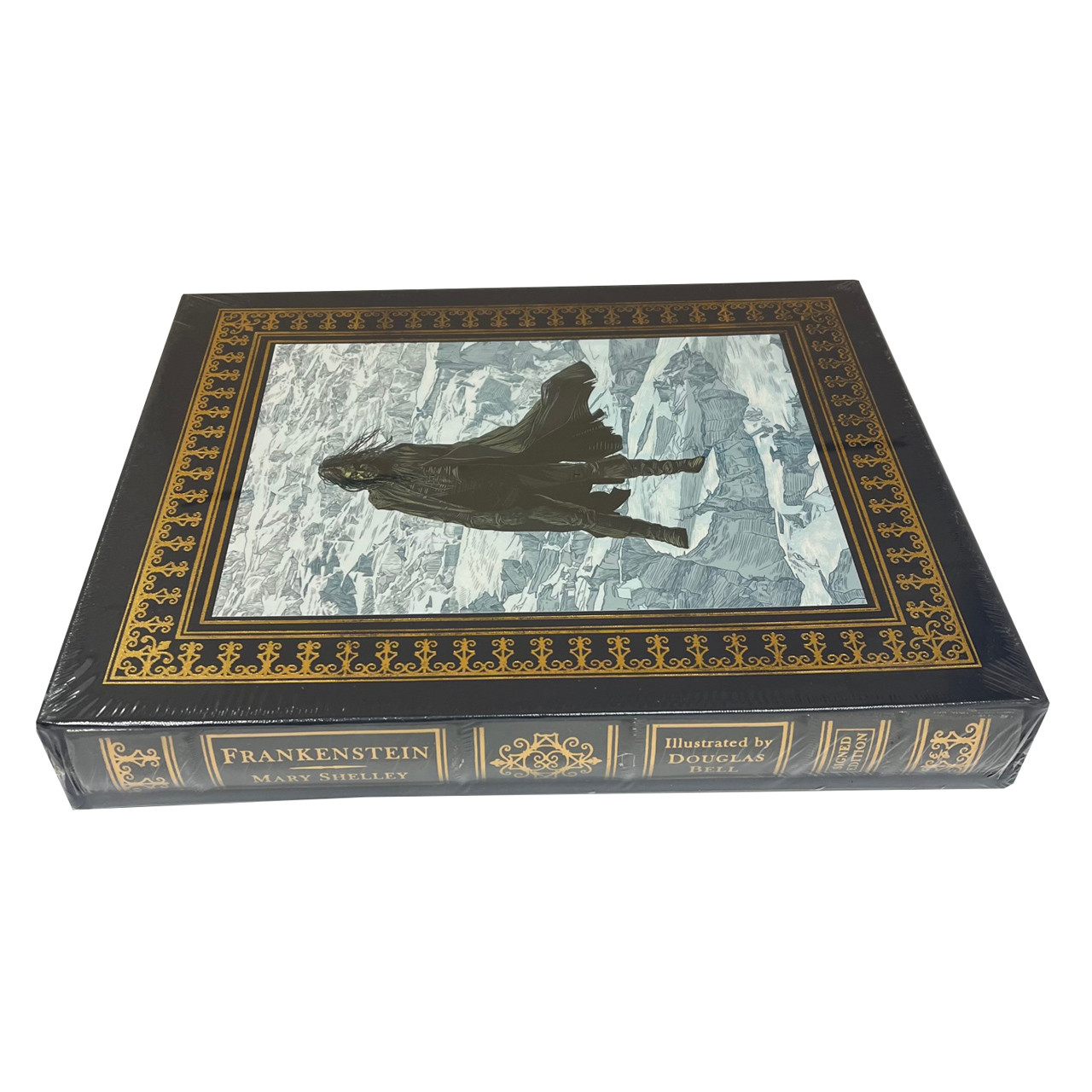 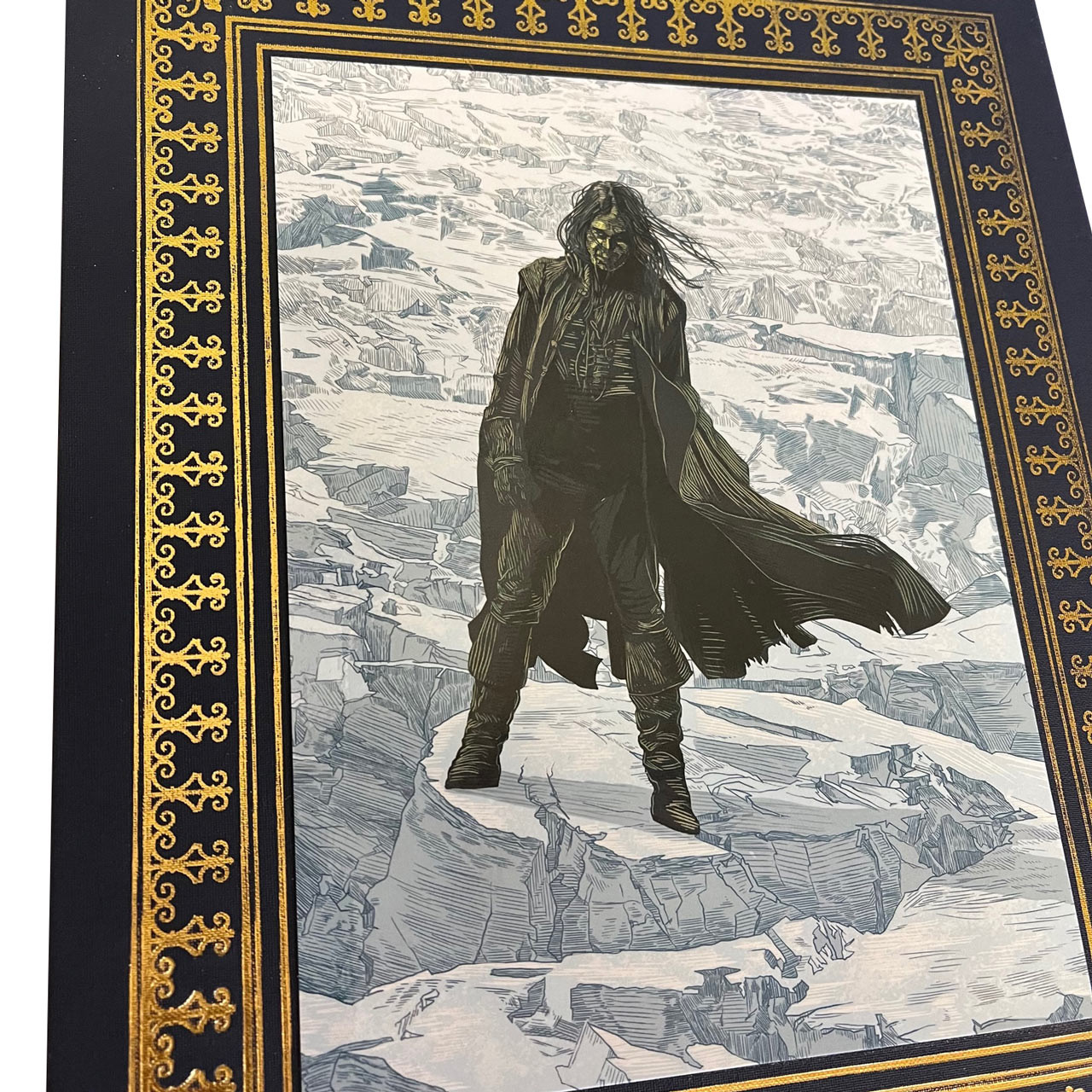 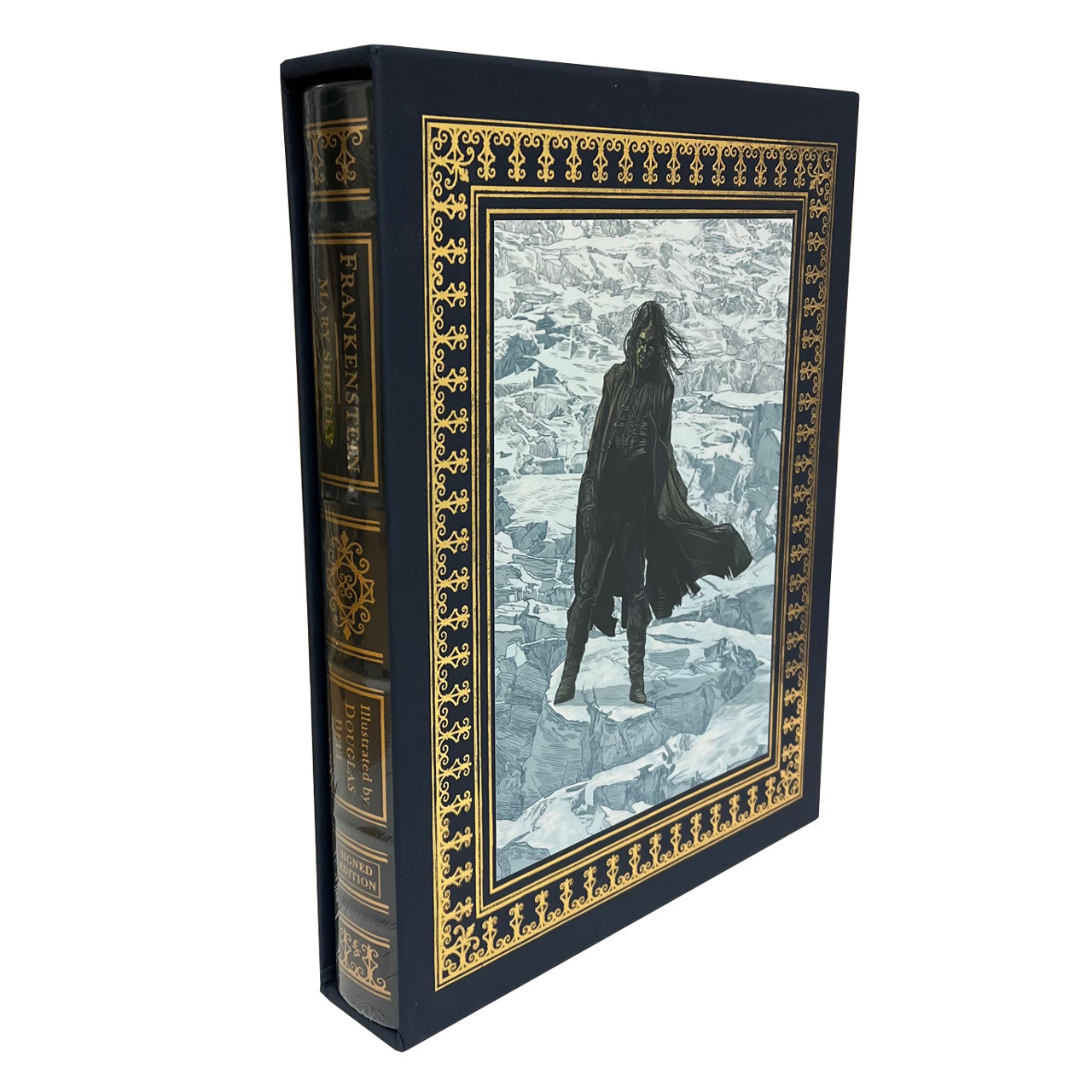 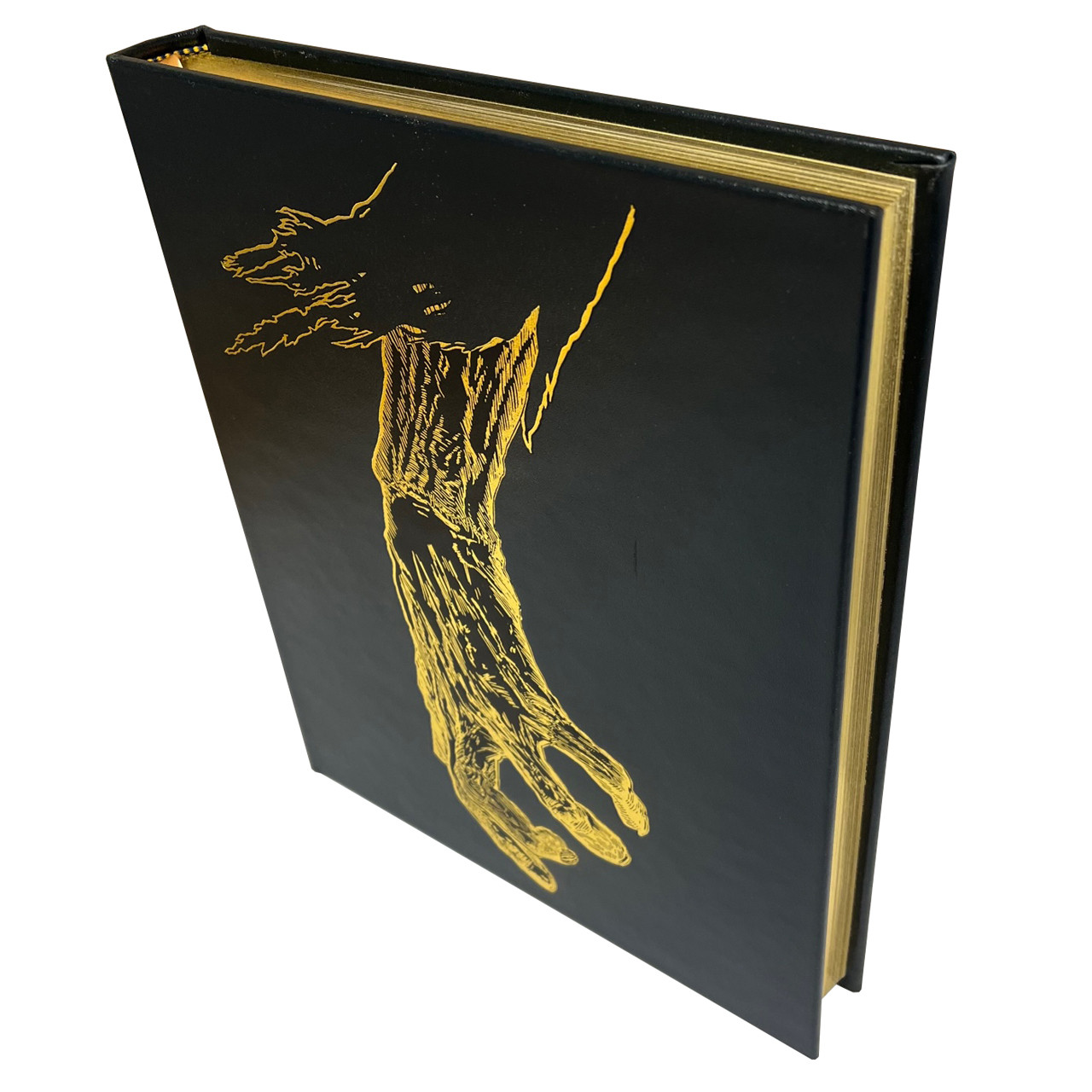 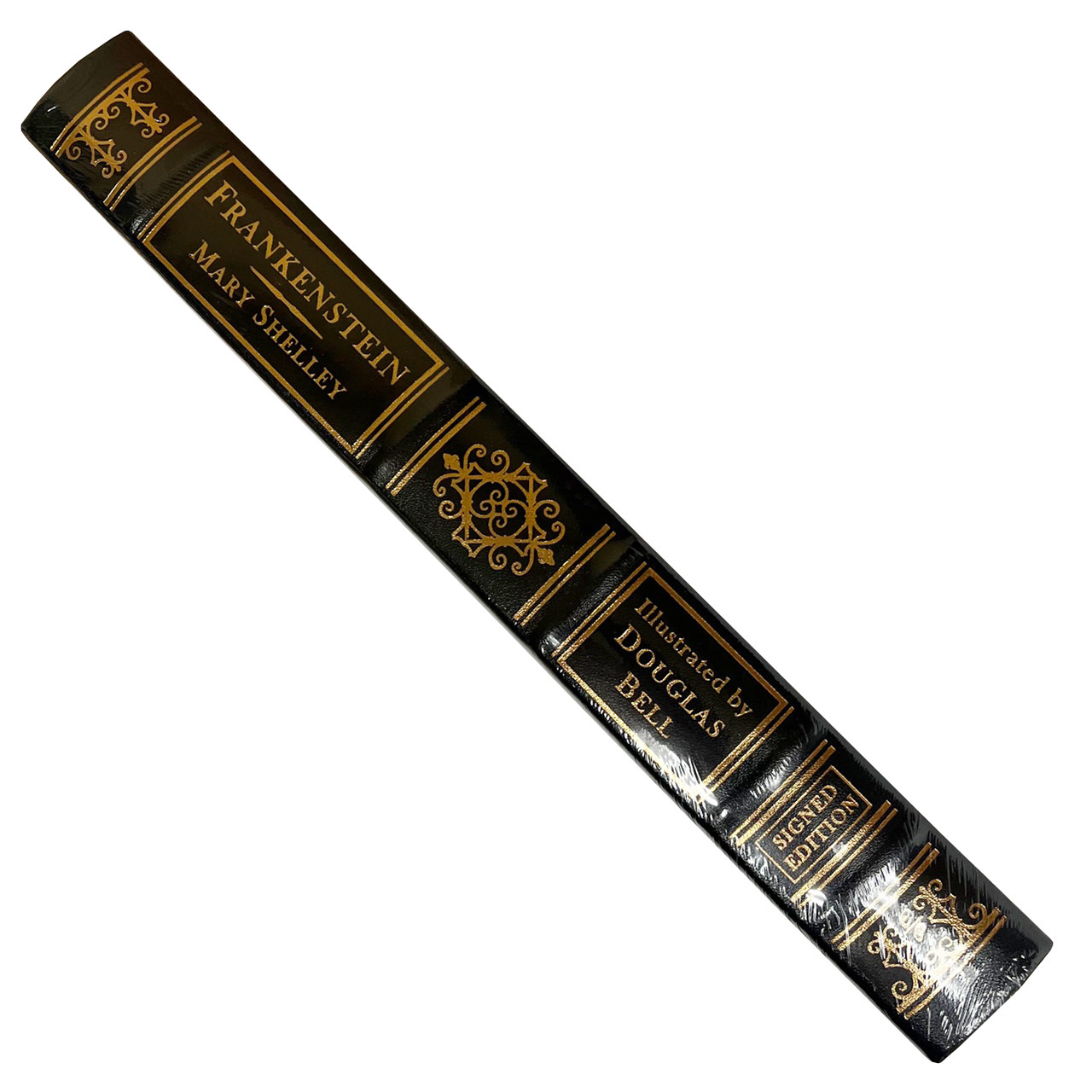 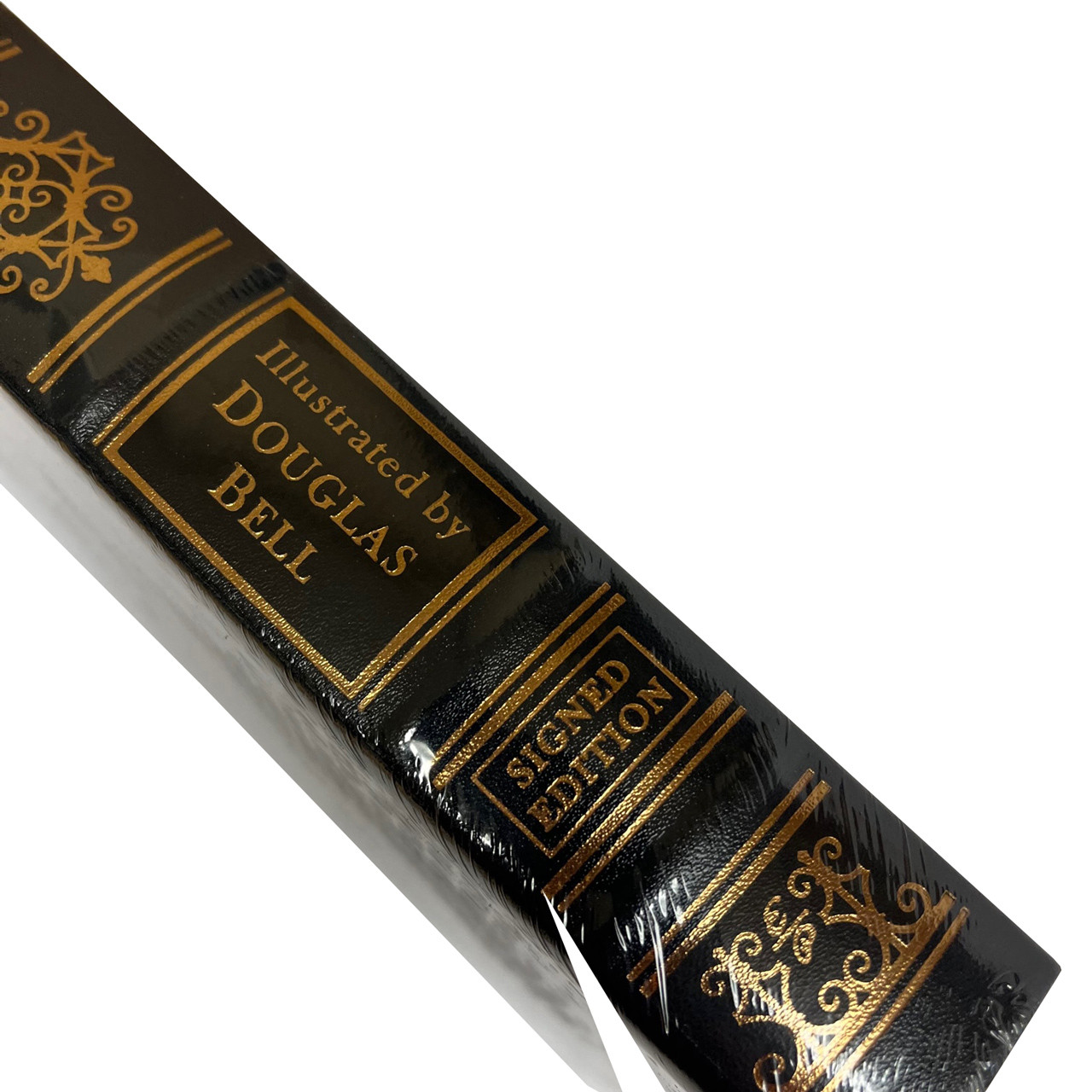 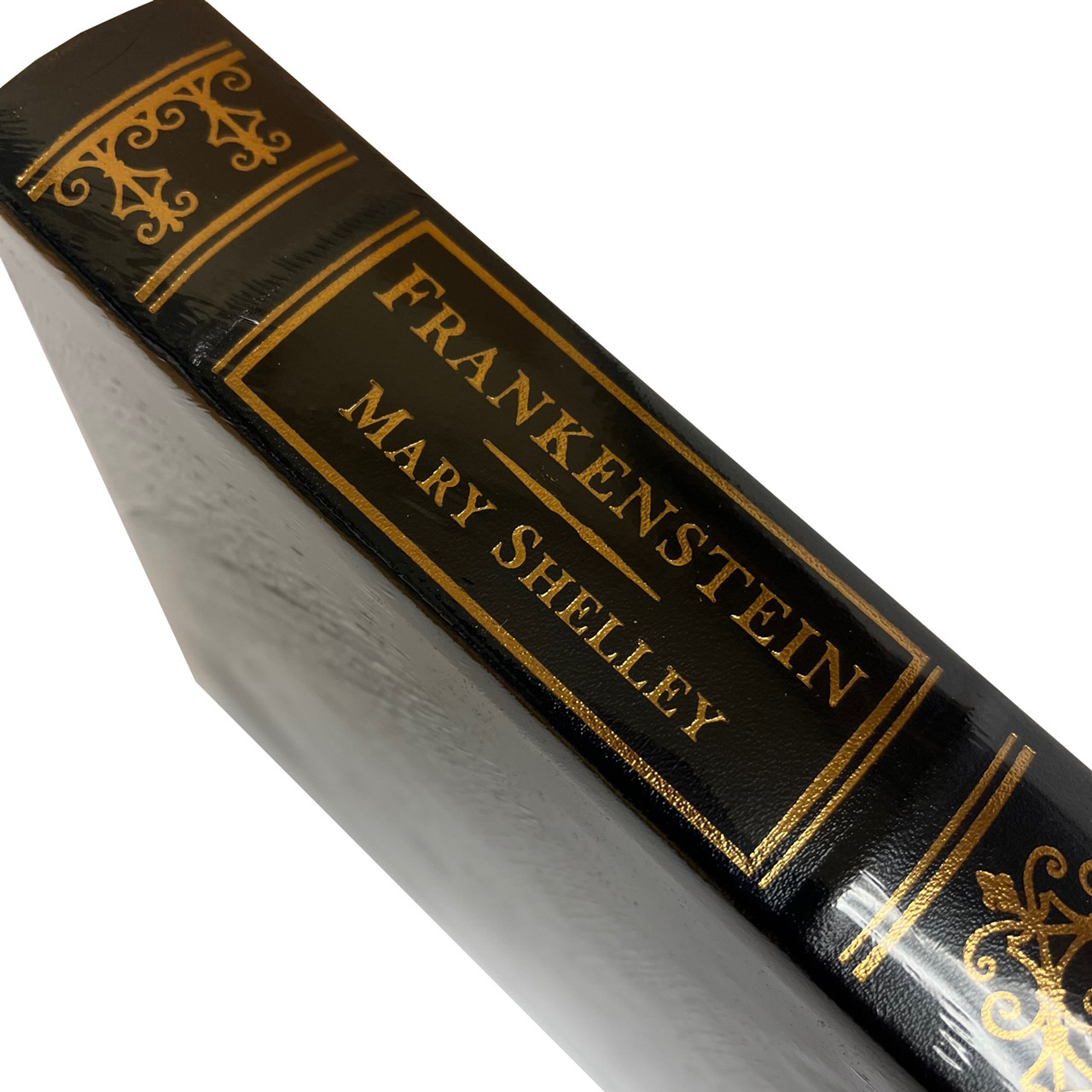 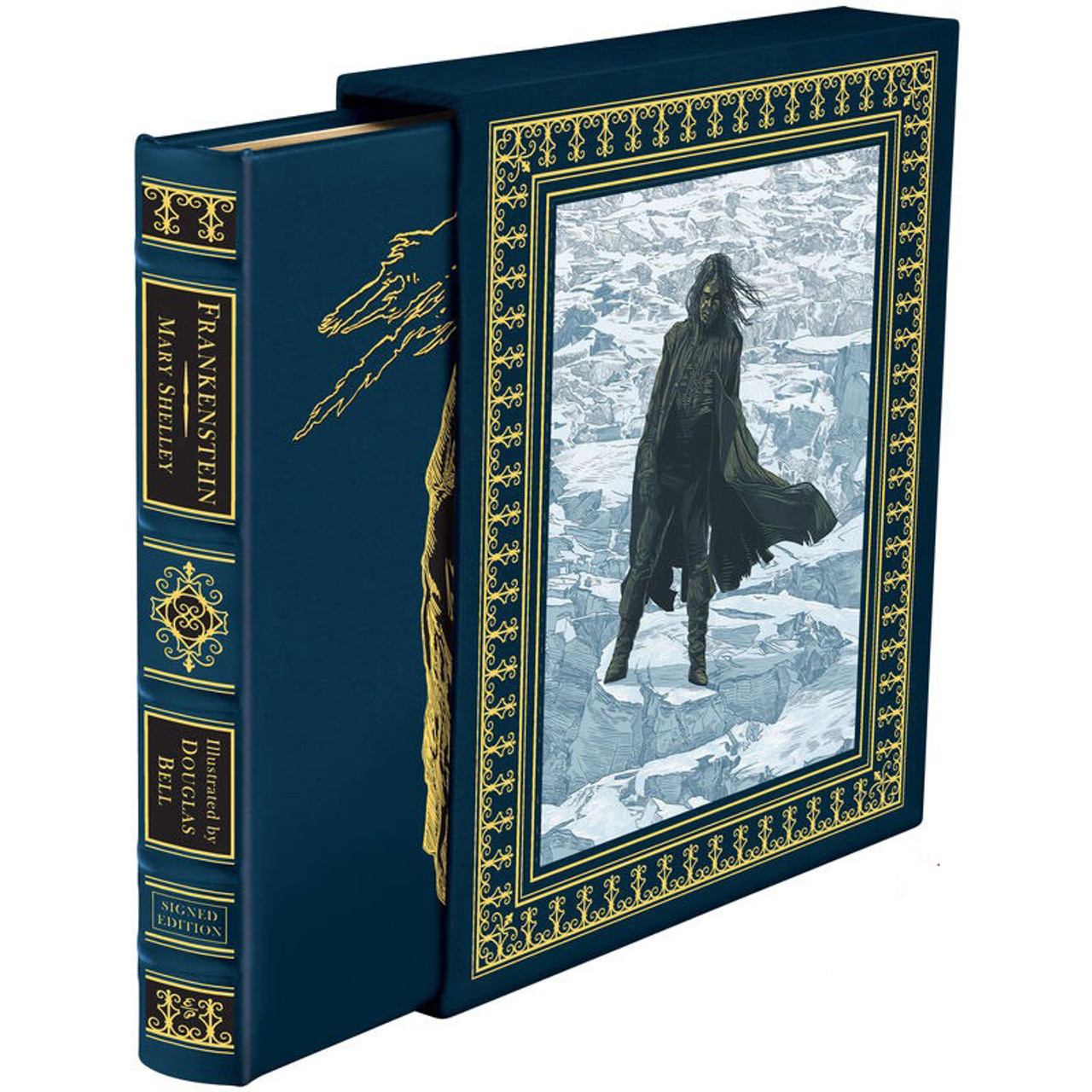 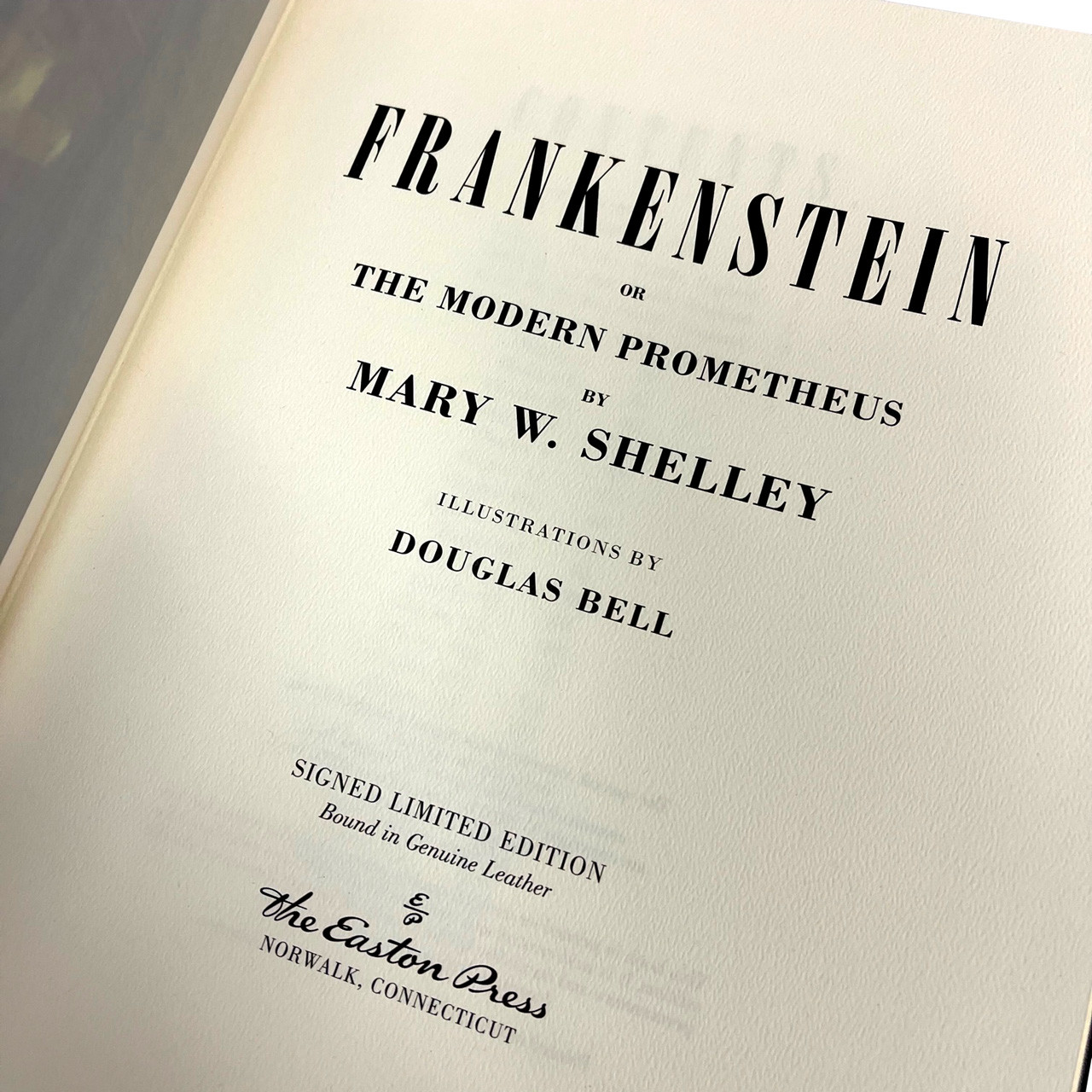 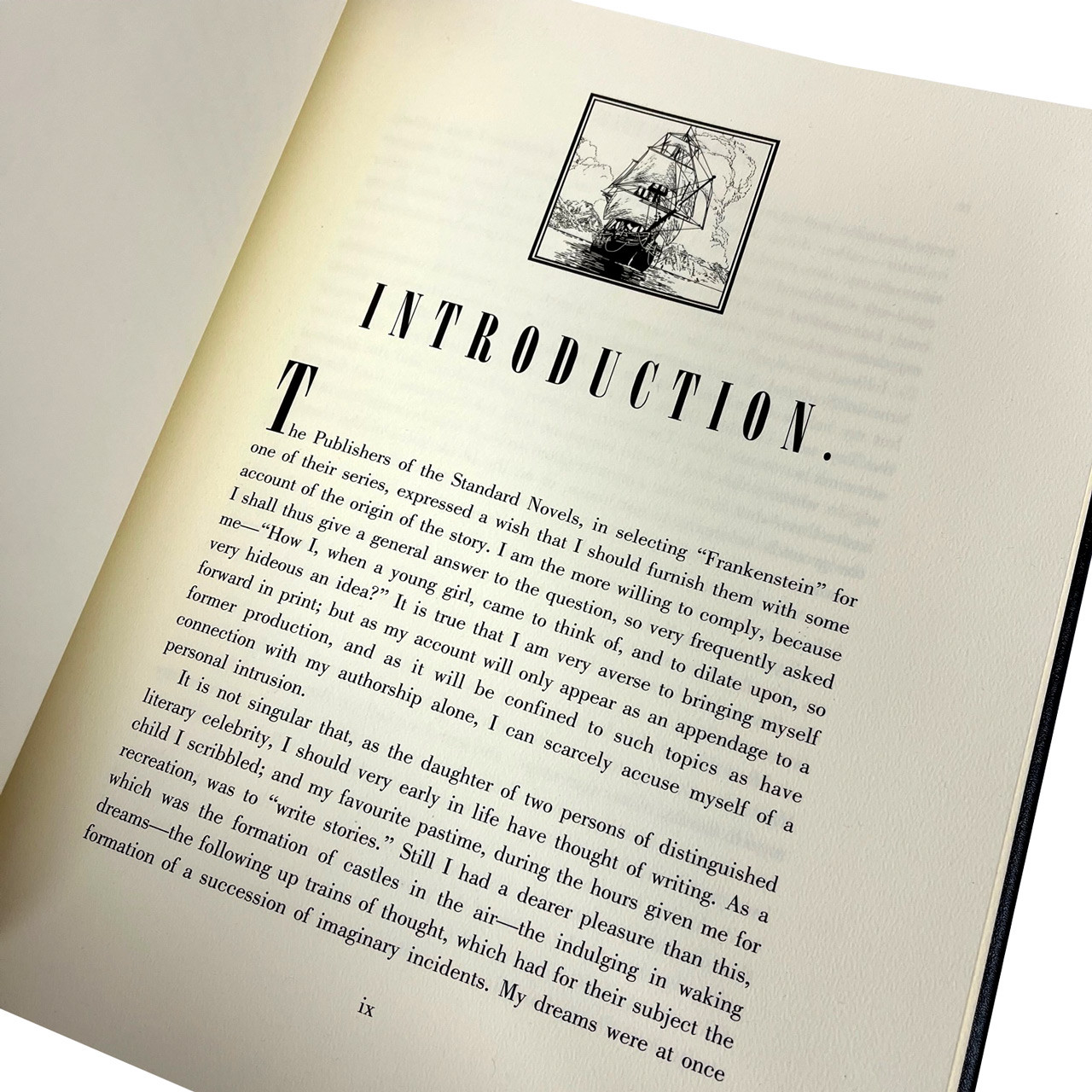 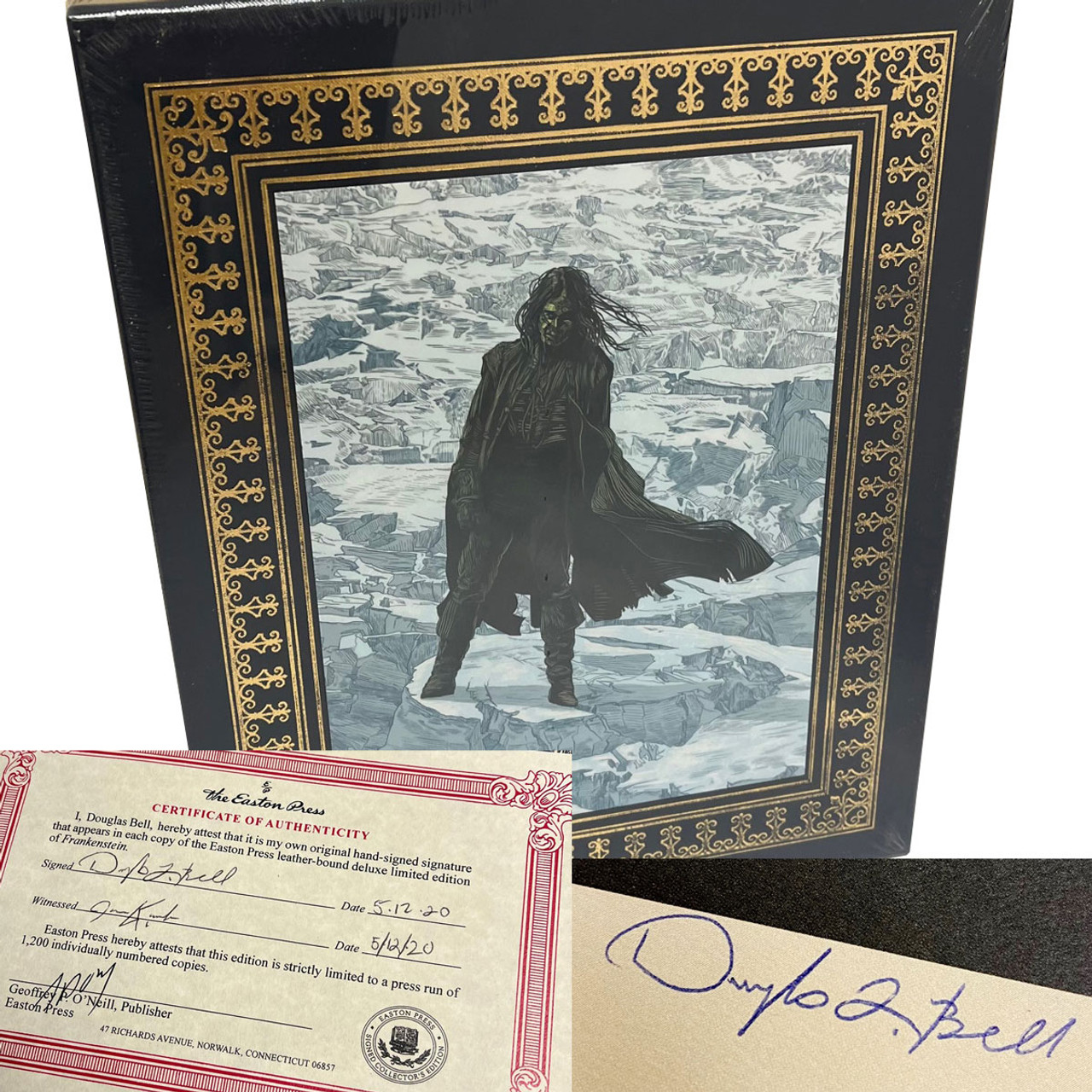 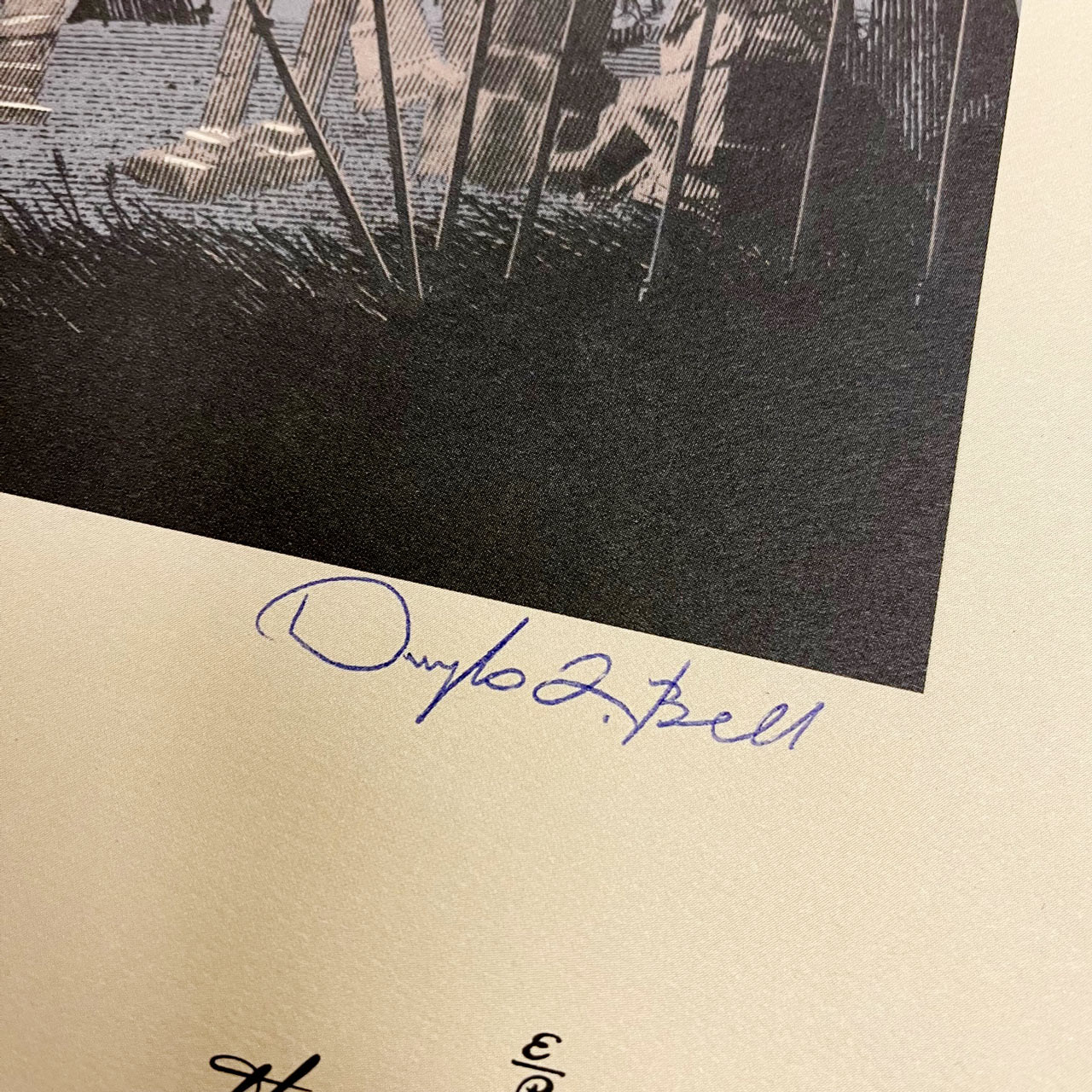 Easton Press. Norwalk, CT. 2020 "Frankenstein" Mary Shelley. Signed Limited Artist Edition. Collector's Edition. A great unique gift for yourself or for a loved one. Beautifully illustrated and luxuriously bound in full genuine leather. One of the most famous works and a monster classic. Includes COA. Signed by the artist Douglas Bell. As New. Double-sealed. Mary Shelley’s iconic Gothic tale featuring new artwork by Douglas Bell created for this volume.

Frankenstein; or, The Modern Prometheus is a novel written by Mary Shelley about a creature produced by an unorthodox scientific experiment. Shelley started writing the story when she was eighteen, and the novel was published when she was twenty-one. The first edition was published anonymously in London in 1818. Shelley's name appears on the second edition, published in France in 1823.

Shelley had travelled in the region of Geneva, where much of the story takes place, and the topics of galvanism and other similar occult ideas were themes of conversation among her companions, particularly her future husband, Percy. The storyline emerged from a dream. Mary, Percy, Lord Byron, and John Polidori decided to have a competition to see who could write the best horror story. After thinking for weeks about what her possible storyline could be, Shelley dreamt about a scientist who created life and was horrified by what he had made. She then wrote Frankenstein.

Frankenstein is infused with some elements of the Gothic novel and the Romantic movement and is also considered to be one of the earliest examples of science fiction. Brian Aldiss has argued that it should be considered the first true science fiction story, because unlike in previous stories with fantastical elements resembling those of later science fiction, the central character "makes a deliberate decision" and "turns to modern experiments in the laboratory" to achieve fantastic results. It has had a considerable influence across literature and popular culture and spawned a complete genre of horror stories and films.

Since publication of the novel, the name "Frankenstein" is often used to refer to the monster itself, as is done in the stage adaptation by Peggy Webling. This usage is sometimes considered erroneous, but usage commentators regard the monster sense of "Frankenstein" as well-established and not an error. In the novel, the monster is identified via words such as "creature," "monster", "fiend", "wretch", "vile insect", "daemon", and "it". Speaking to Dr. Frankenstein, the monster refers to himself as "the Adam of your labors", and elsewhere as someone who "would have" been "your Adam", but is instead your "fallen angel."

Mary Wollstonecraft Shelley (UK: /ˈwʊlstənkrɑːft/; née Godwin; 30 August 1797 – 1 February 1851) was an English novelist who wrote the Gothic novel Frankenstein; or, The Modern Prometheus (1818), which is considered an early example of science fiction. She also edited and promoted the works of her husband, the Romantic poet and philosopher Percy Bysshe Shelley. Her father was the political philosopher William Godwin and her mother was the philosopher and women's rights advocate Mary Wollstonecraft.

Mary's mother died less than a fortnight after giving birth to her. She was raised by her father, who provided her with a rich if informal education, encouraging her to adhere to his own anarchist political theories. When she was four, her father married a neighbour, Mary Jane Clairmont, with whom Mary came to have a troubled relationship.

In 1814, Mary began a romance with one of her father's political followers, Percy Bysshe Shelley, who was already married. Together with her stepsister, Claire Clairmont, she and Percy left for France and travelled through Europe. Upon their return to England, Mary was pregnant with Percy's child. Over the next two years, she and Percy faced ostracism, constant debt and the death of their prematurely born daughter. They married in late 1816, after the suicide of Percy Shelley's first wife, Harriet.

In 1816, the couple and Mary's stepsister famously spent a summer with Lord Byron and John William Polidori near Geneva, Switzerland, where Shelley conceived the idea for her novel Frankenstein. The Shelleys left Britain in 1818 for Italy, where their second and third children died before Shelley gave birth to her last and only surviving child, Percy Florence Shelley. In 1822, her husband drowned when his sailing boat sank during a storm near Viareggio. A year later, Shelley returned to England and from then on devoted herself to the upbringing of her son and a career as a professional author. The last decade of her life was dogged by illness, most likely caused by the brain tumour which killed her at age 53.

Until the 1970s, Shelley was known mainly for her efforts to publish her husband's works and for her novel Frankenstein, which remains widely read and has inspired many theatrical and film adaptations. Recent scholarship has yielded a more comprehensive view of Shelley's achievements. Scholars have shown increasing interest in her literary output, particularly in her novels, which include the historical novels Valperga (1823) and Perkin Warbeck (1830), the apocalyptic novel The Last Man (1826) and her final two novels, Lodore (1835) and Falkner (1837). Studies of her lesser-known works, such as the travel book Rambles in Germany and Italy (1844) and the biographical articles for Dionysius Lardner's Cabinet Cyclopaedia (1829–1846), support the growing view that Shelley remained a political radical throughout her life. Shelley's works often argue that cooperation and sympathy, particularly as practised by women in the family, were the ways to reform civil society. This view was a direct challenge to the individualistic Romantic ethos promoted by Percy Shelley and the Enlightenment political theories articulated by her father, William Godwin.

Very Fine. As New. Sealed. The condition is of the highest quality. A wonderful bright clean copy. Free of markings, writings, or stamps. No attached bookplates or indication of any removed. Unread. Includes unattached Ex-Libris bookplate.