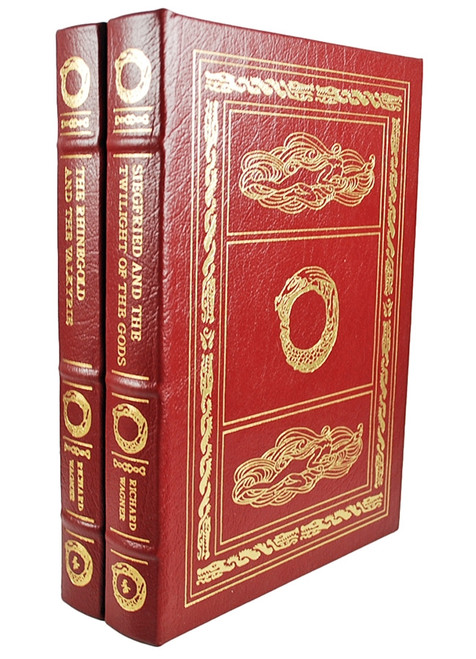 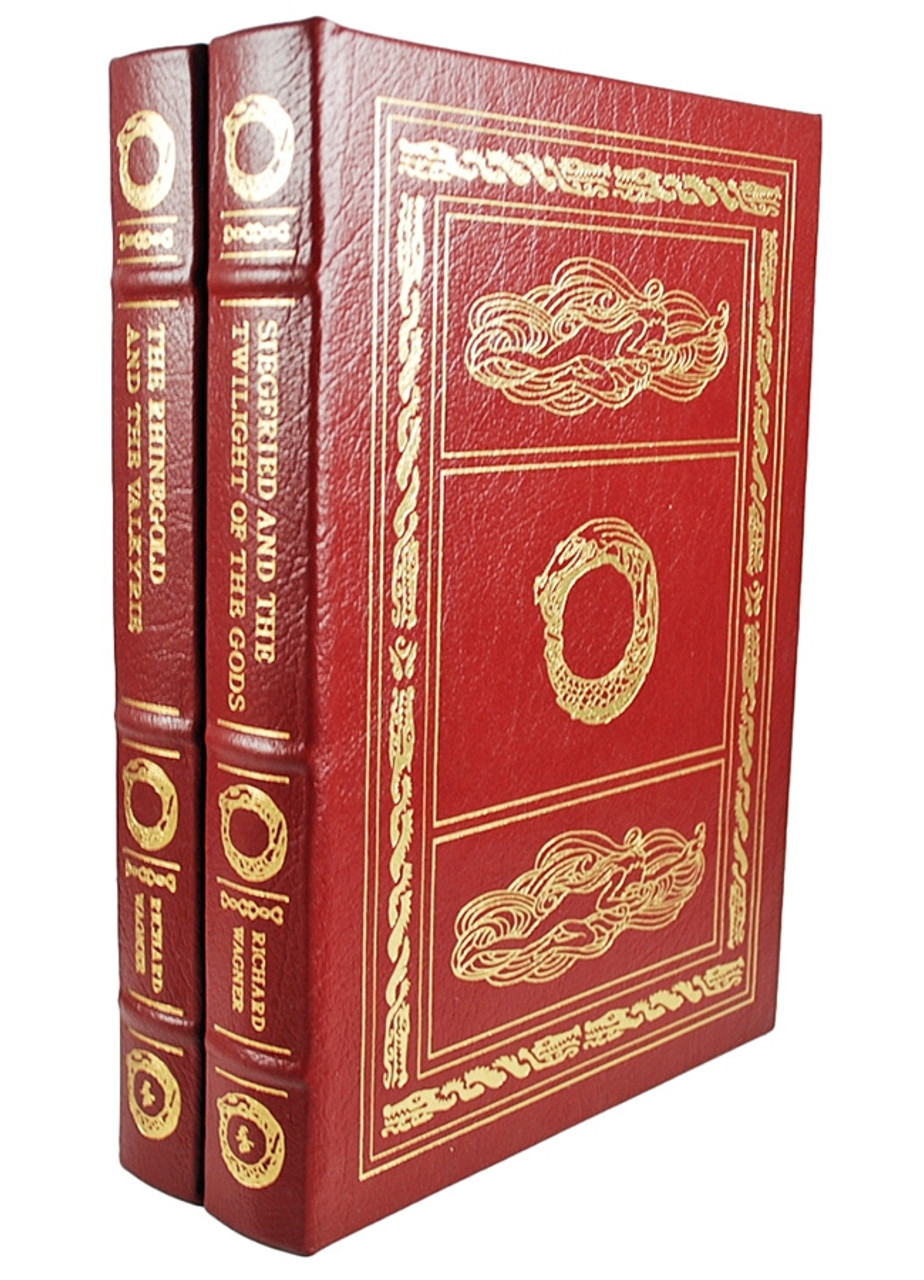 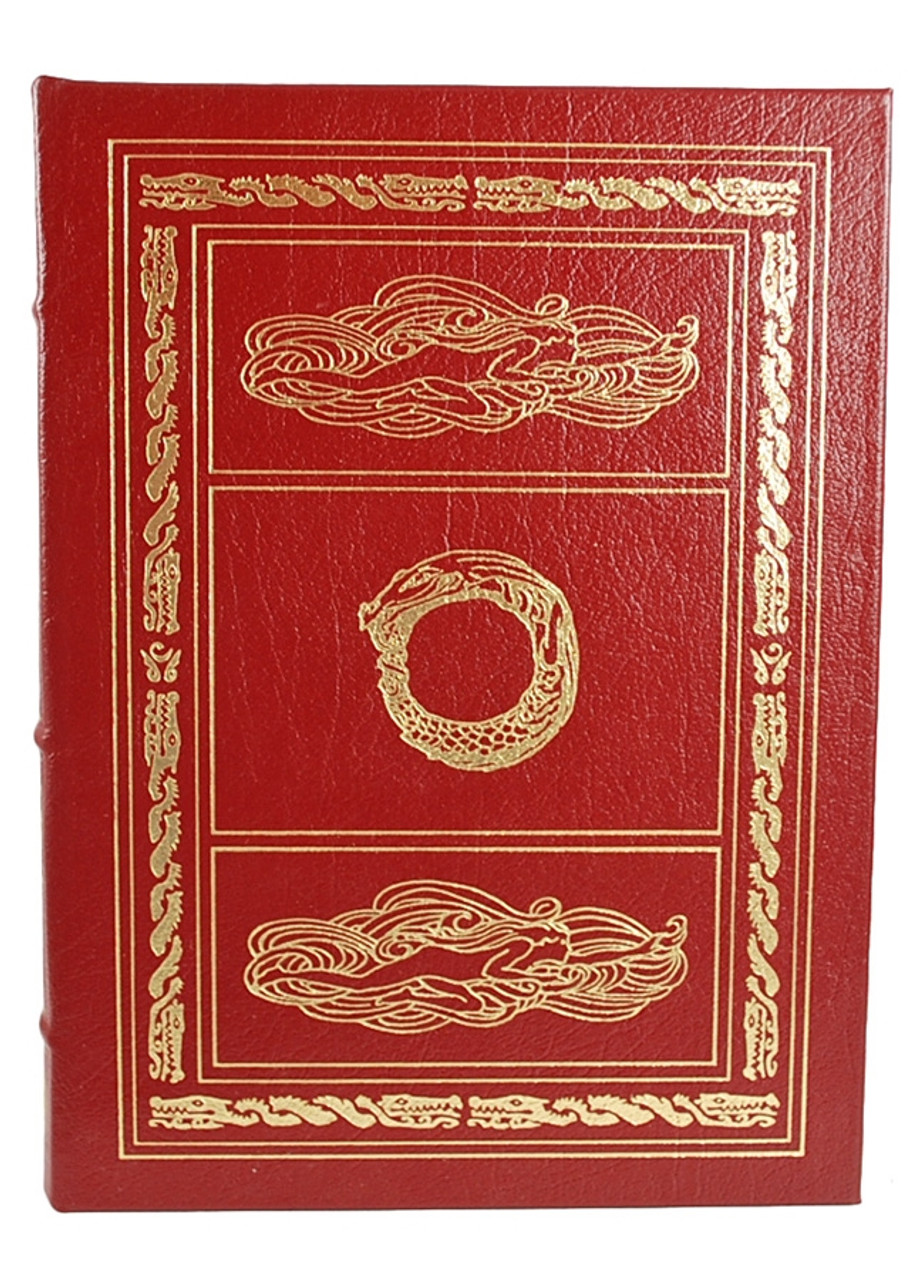 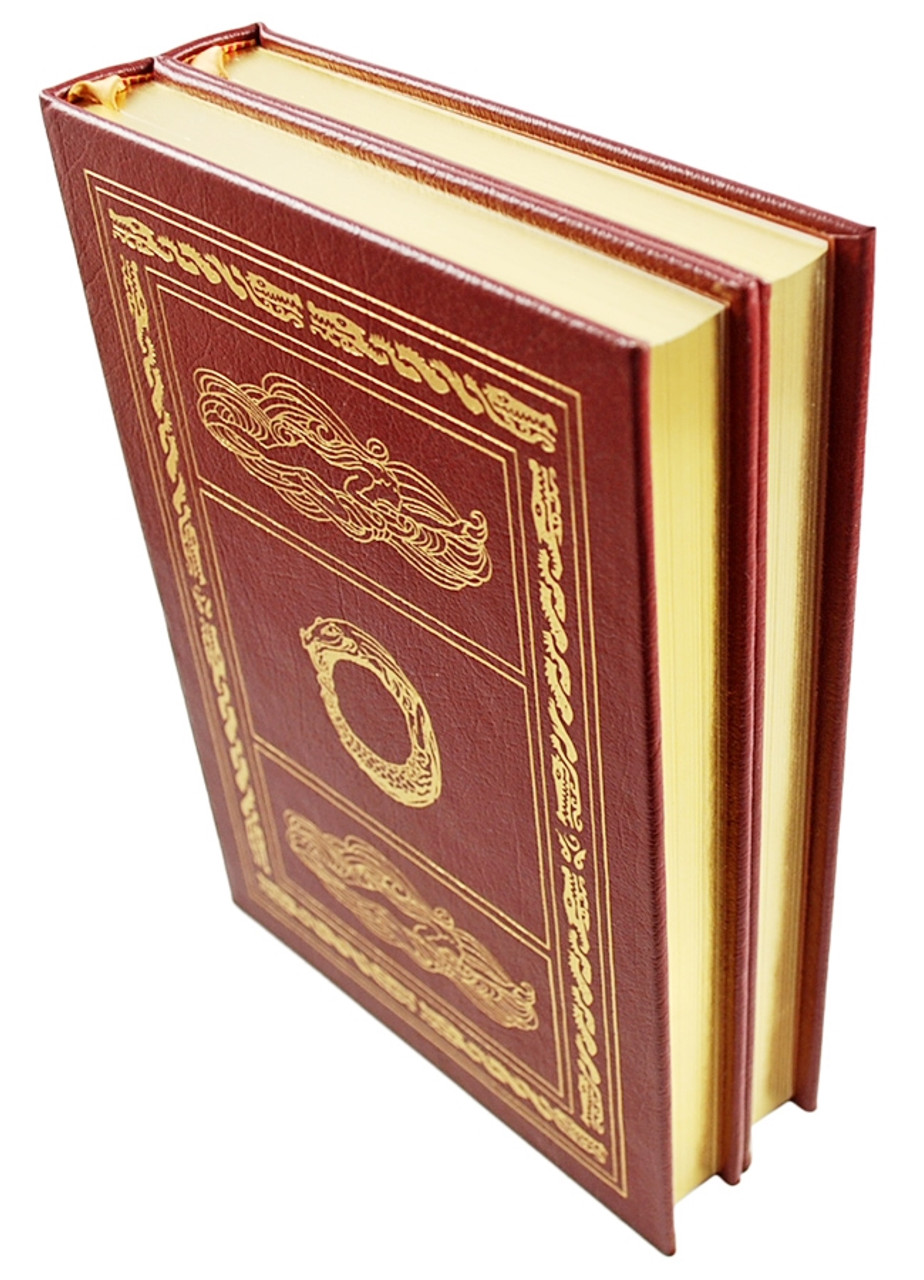 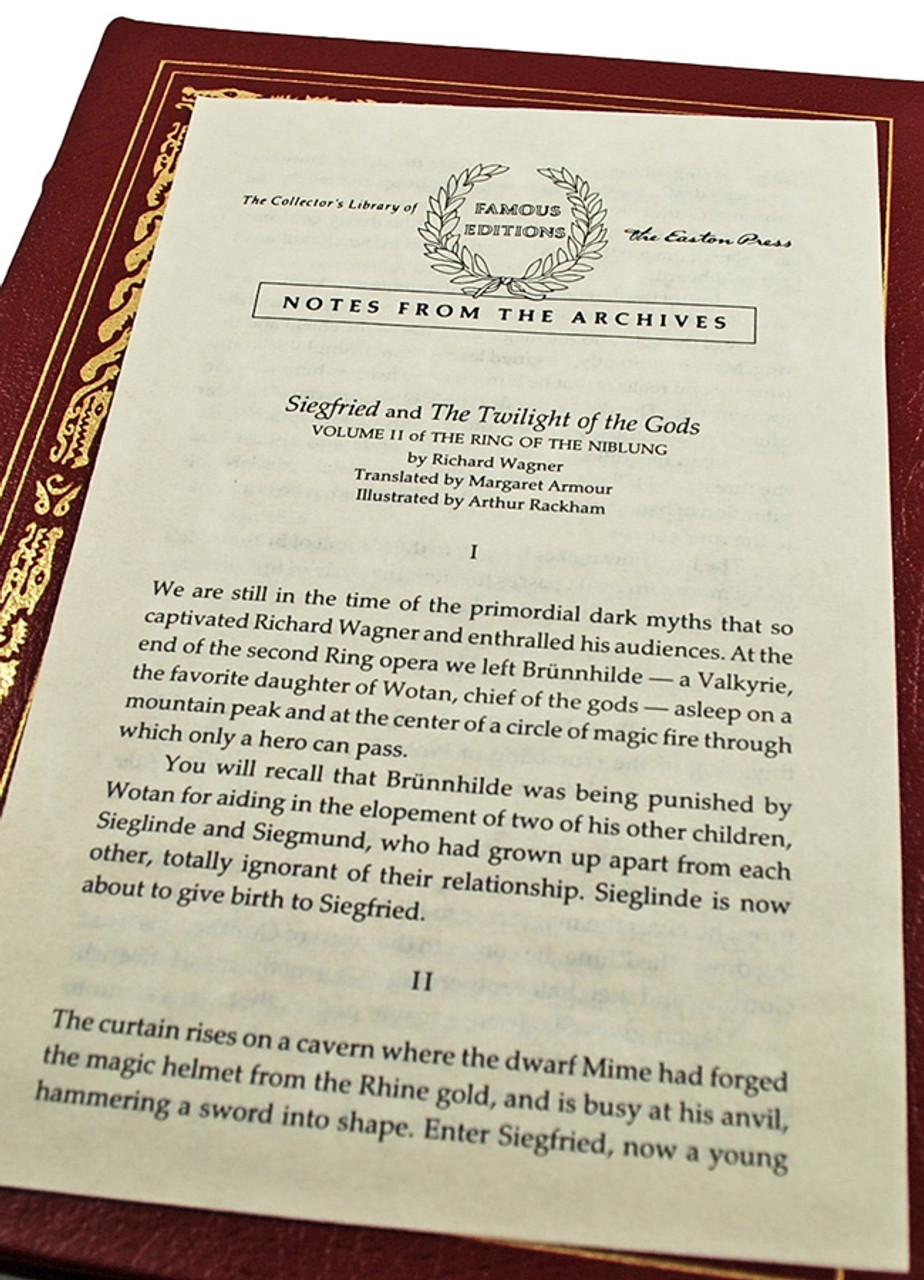 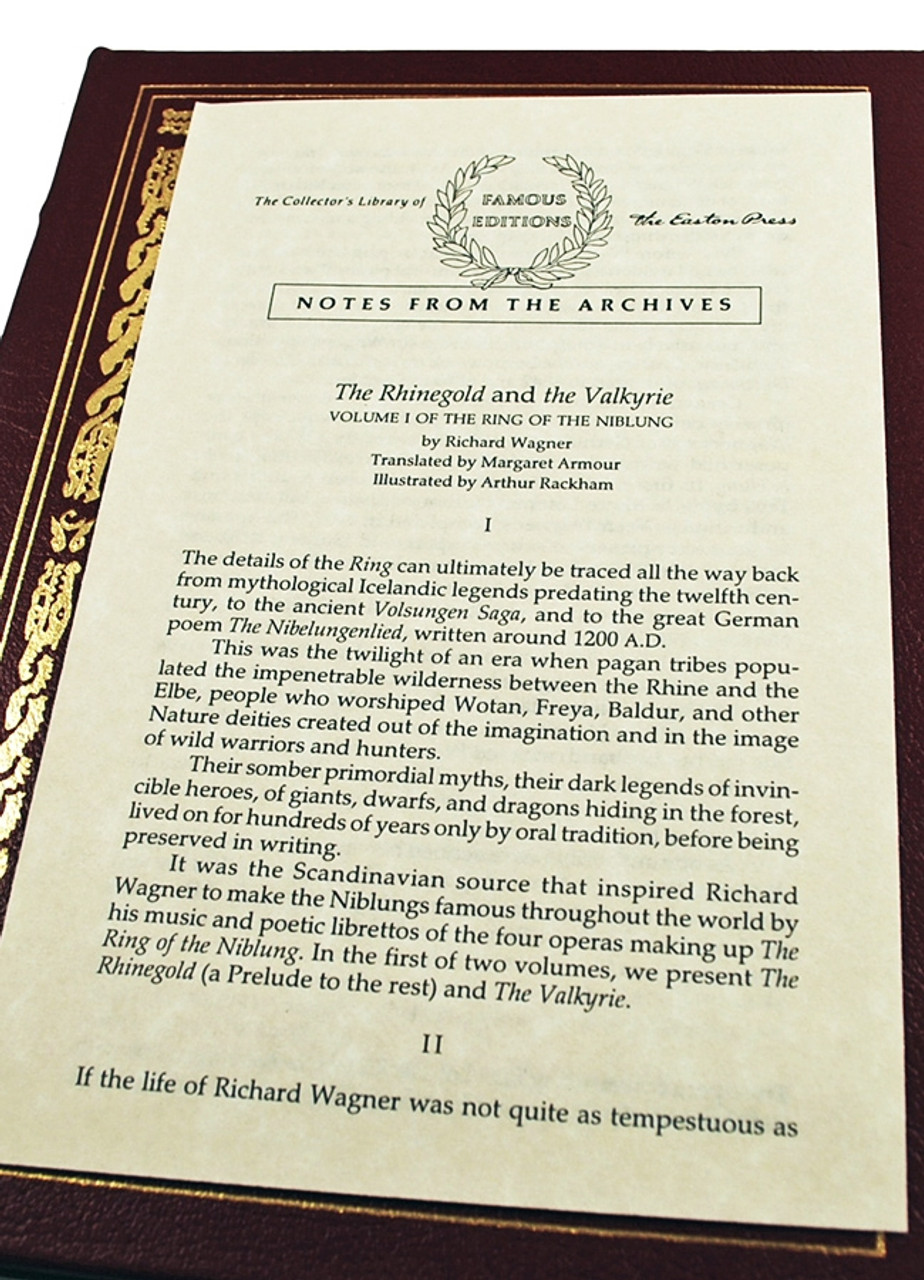 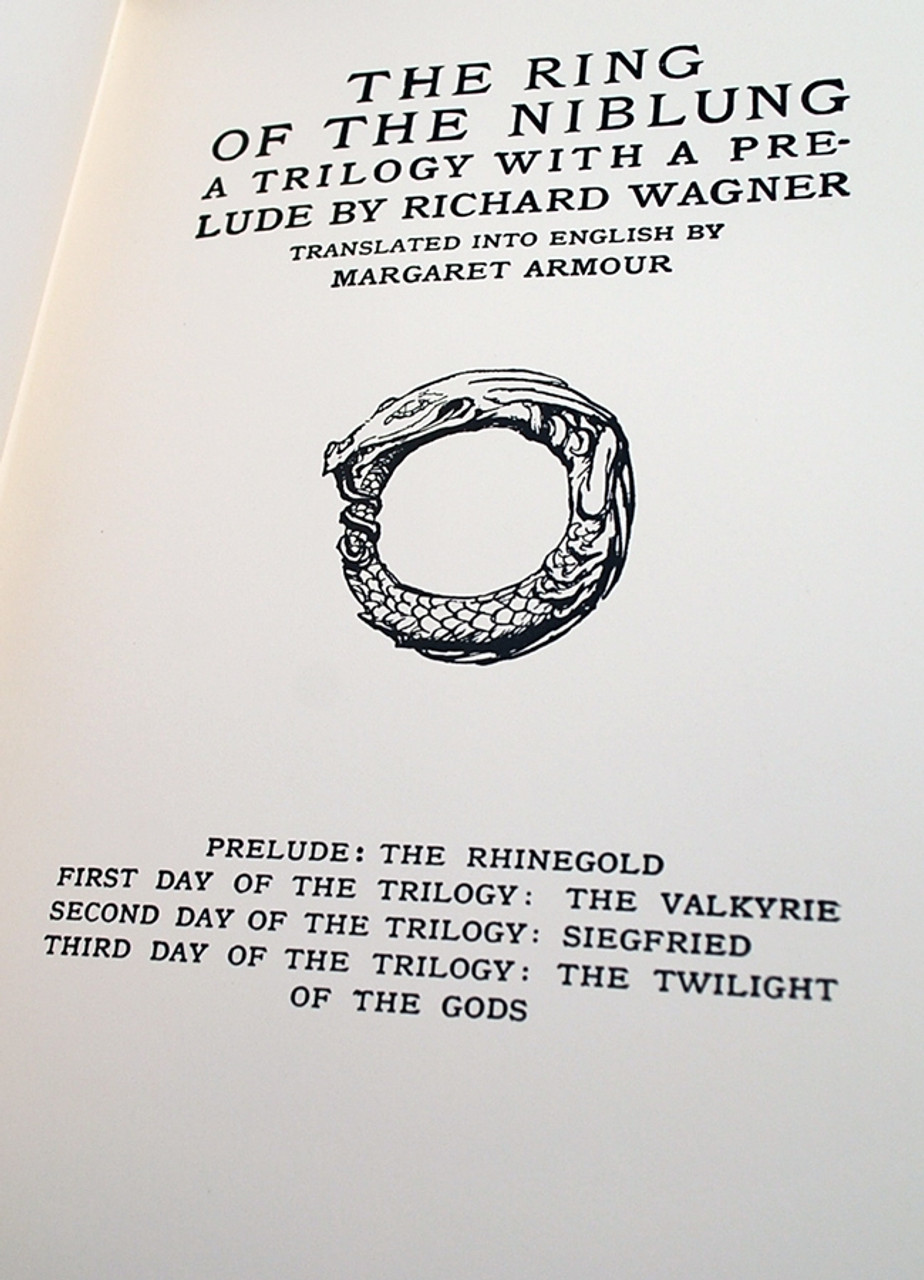 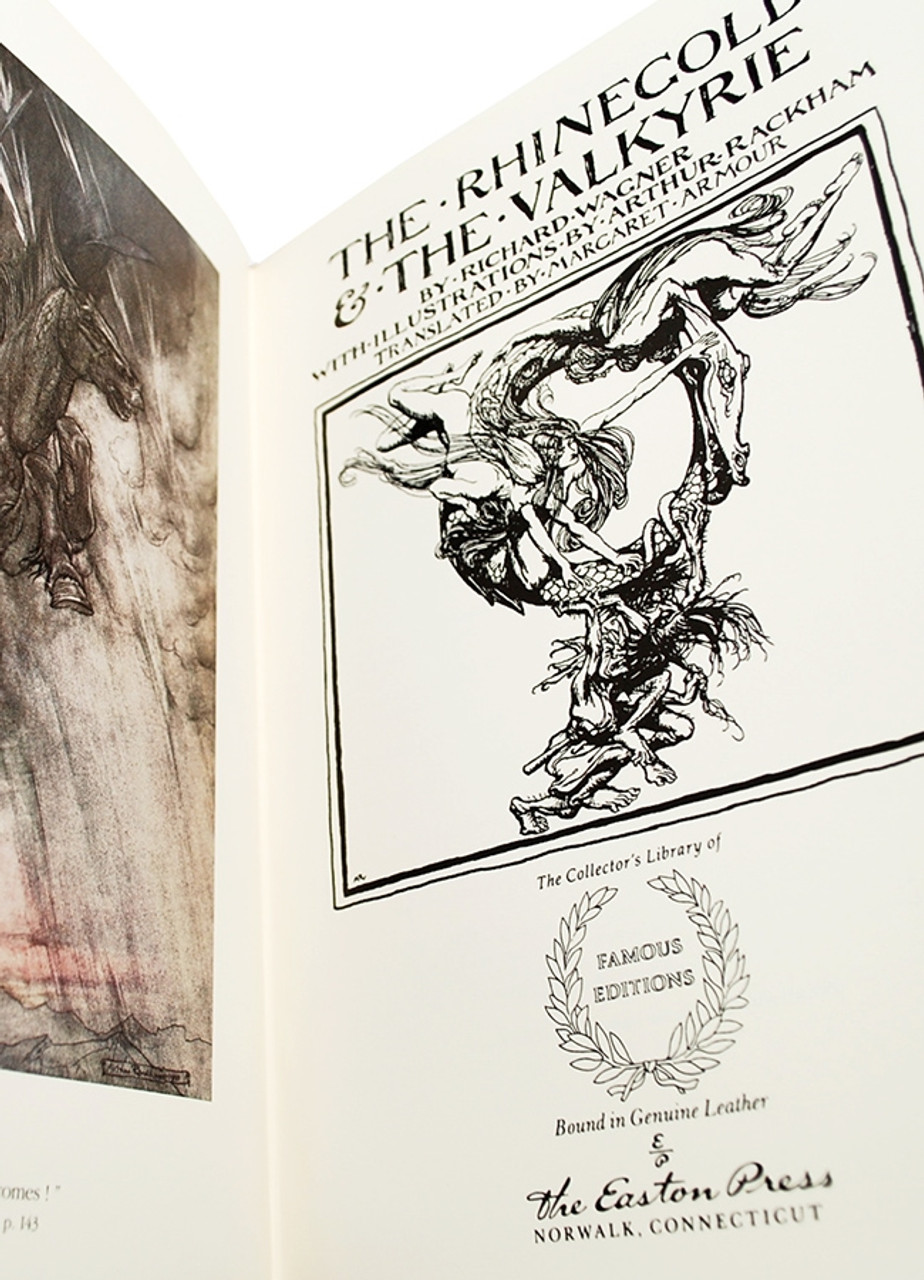 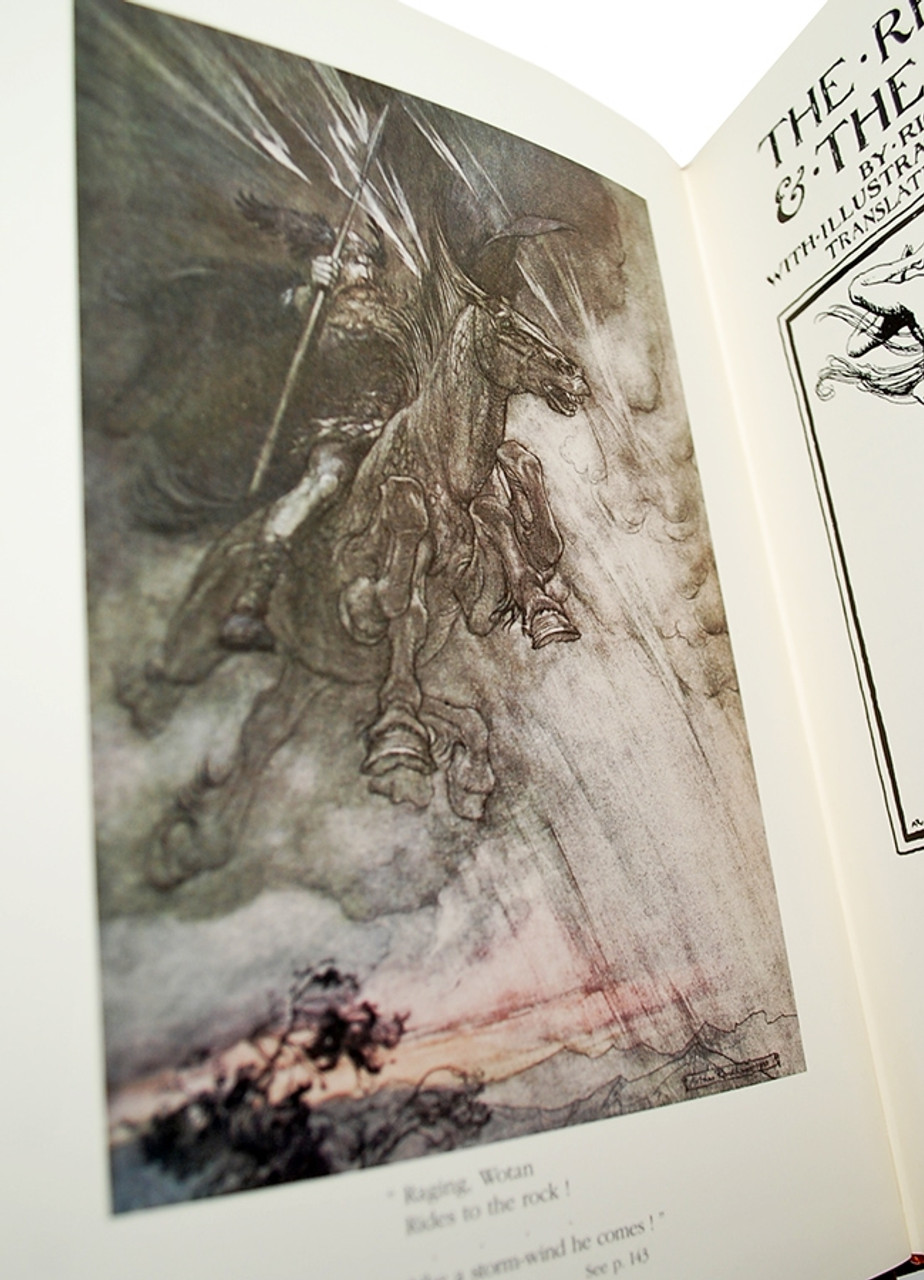 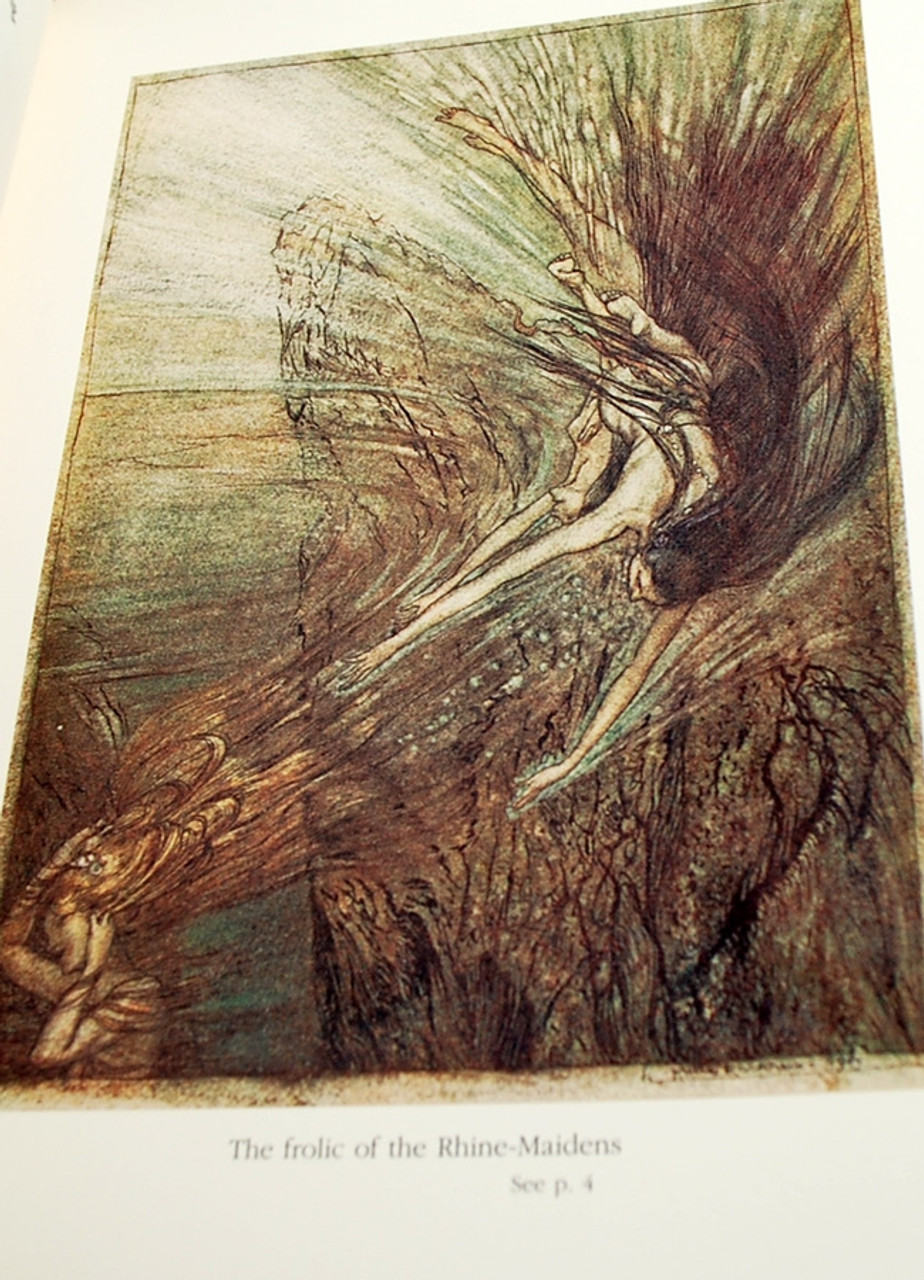 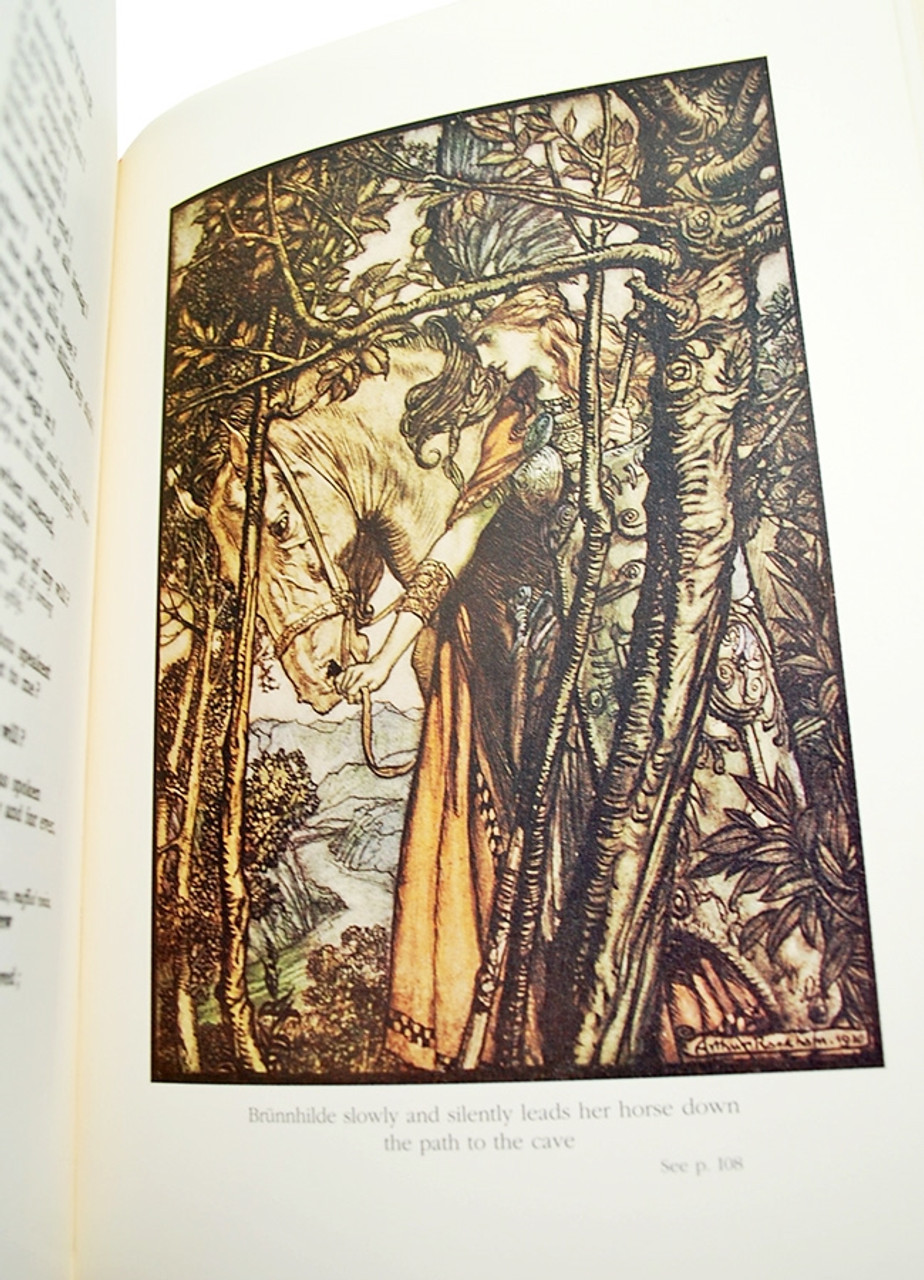 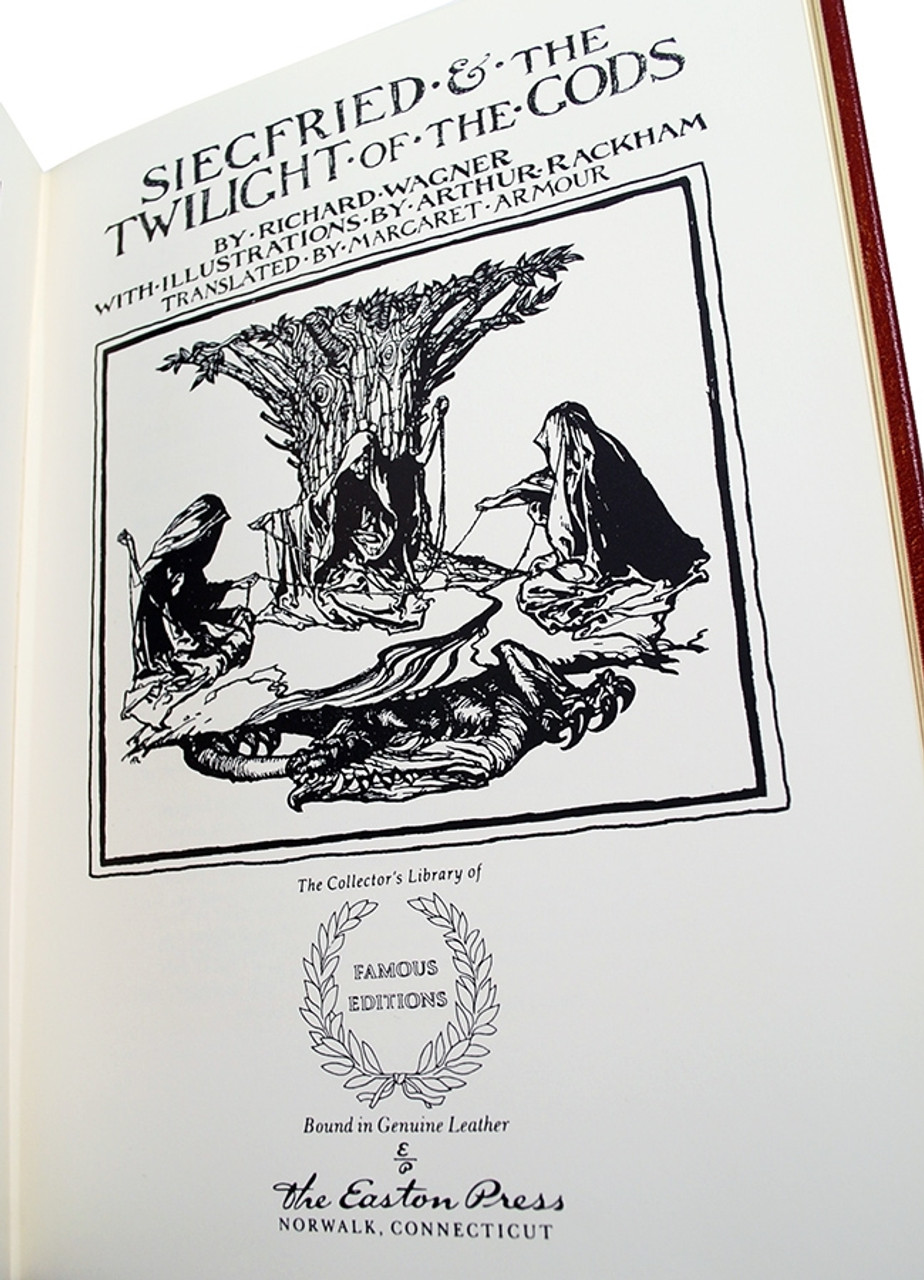 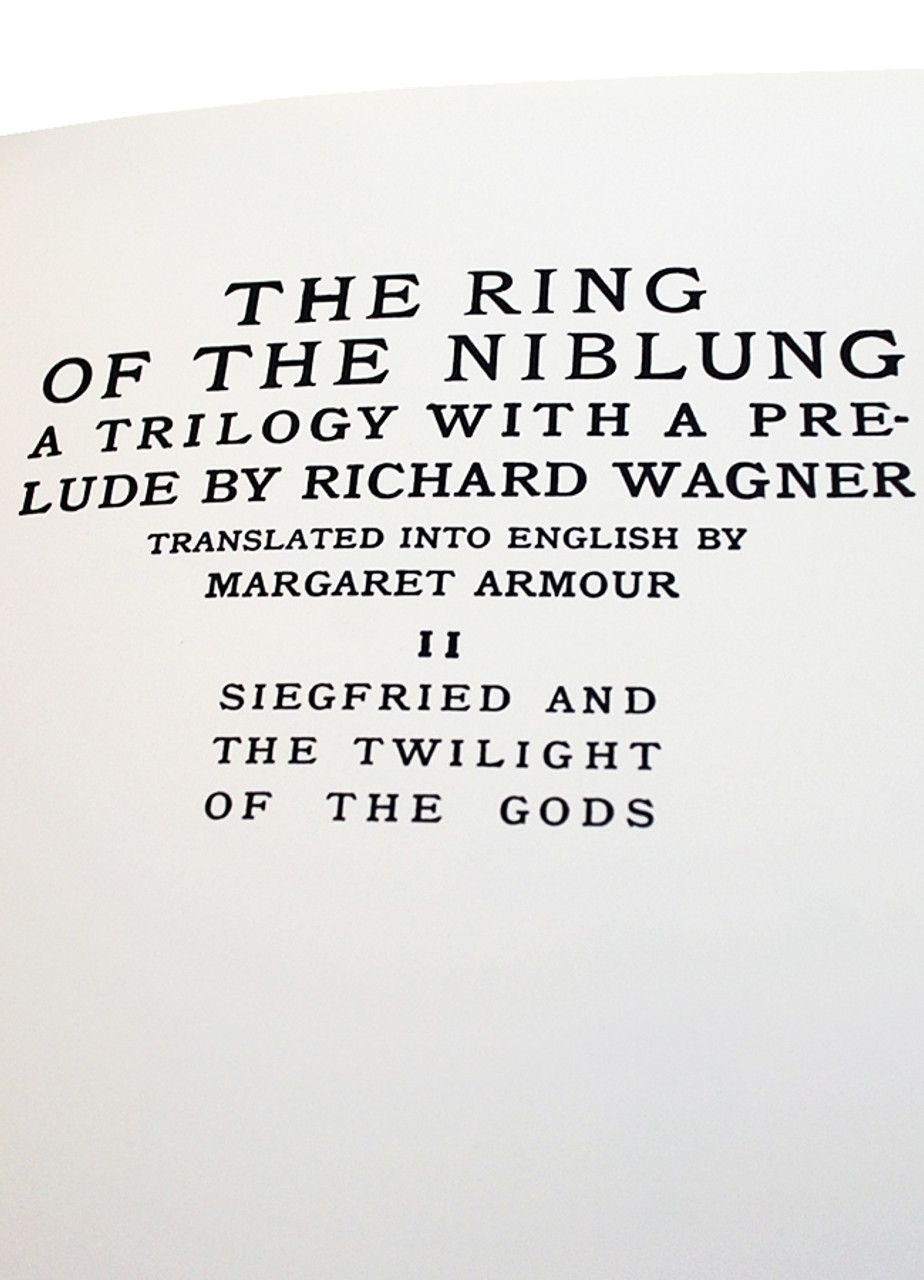 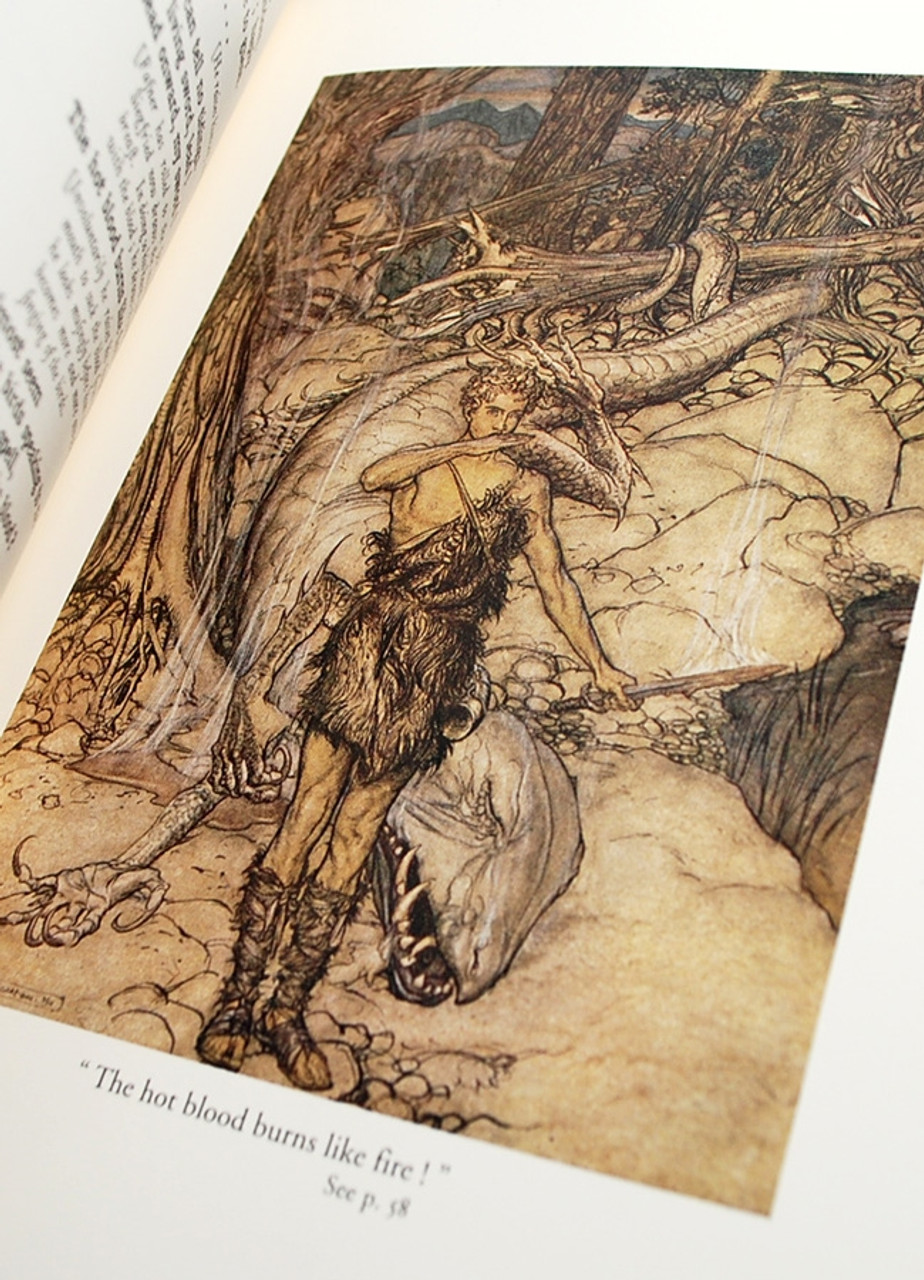 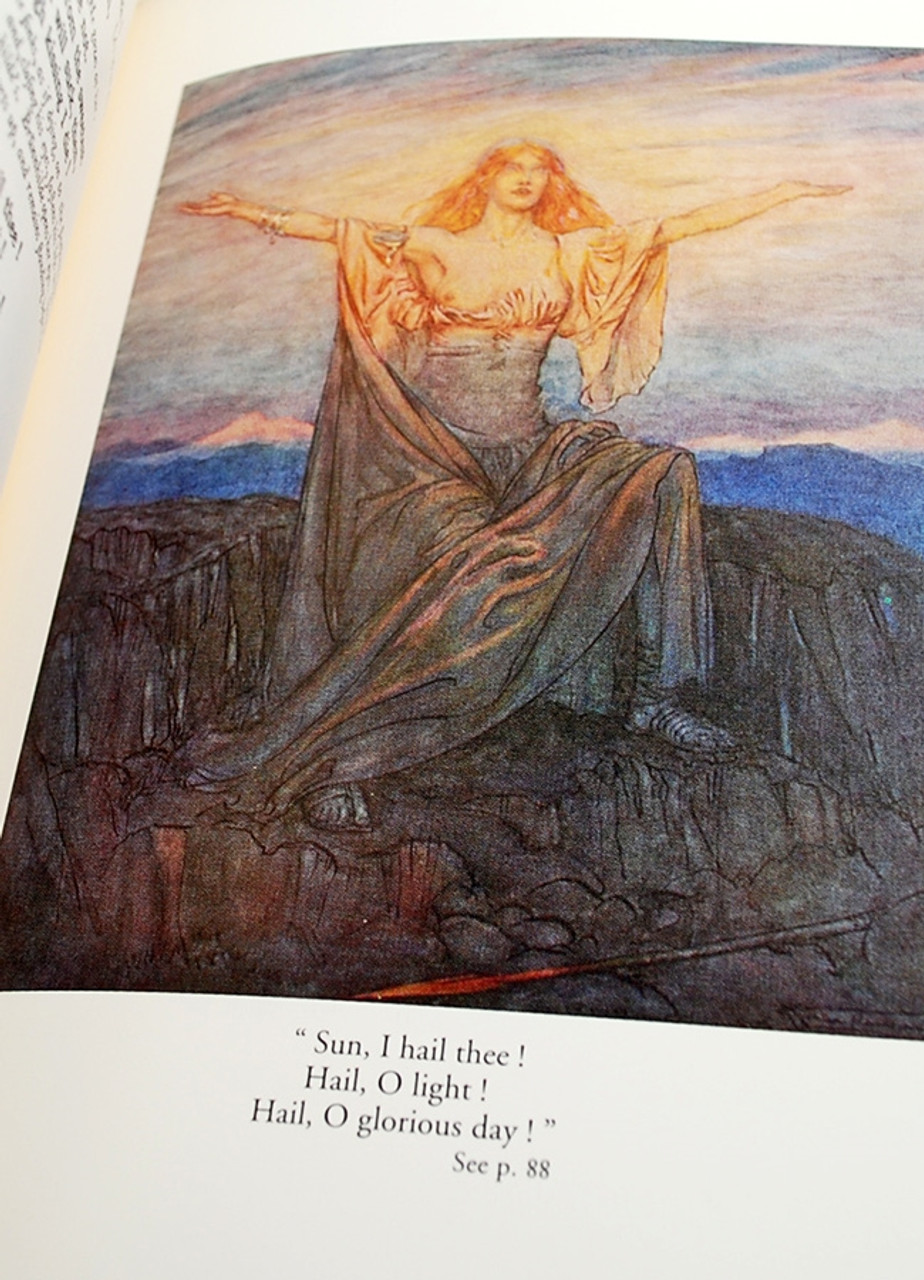 Easton Press, Norwalk CT. 2001. Richard Wagner, The Ring of the Niblung: "Siegfried and The Twilight of the Gods" and "The Rhinegold and the Valkyrie" A matching set luxuriously bound in full genuine leather. Limited Collector's Edition.


Two Volumes in one shipment: 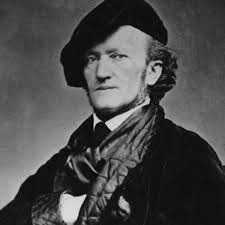 Born in Germany on May 22, 1813, Richard Wagner went on to become one of the world's most influential, and controversial, composers. He is famous for both his epic operas, including the four-part, 18-hour Ring Cycle, as well as for his anti-semitic writings, which, posthumously, made him a favorite of Adolf Hitler. There is evidence that Wagner's music was played at the Dachau concentration camp to "re-educate" the prisoners. Wagner had a tumultuous love life, which involved several scandalous affairs. He died of a heart attack in Venice on February 13, 1883.

A greenish twilight, lighter above than below. The upper part is filled with undulating water, which streams respectively from right to left. Towards the bottom the waves resolve themselves into a mist which grows finer as it descends, so that a space, as high as a mans body from the ground, appears to be quite free from the water, which floats like a train of clouds over the gloomy stretch below. Steep rocky peaks jut up everywhere from the depths, and enclose the entire stage. The ground is a wild confusion of jagged rocks, no part of it being quite level, and on every side deeper fisures are indicated by a still denser gloom. Woglinde circles with graceful swimming movements round the central rock.

Siegfried & The Twilight of the Gods

In the second part of Margaret Armour's translation of possibly Wagner's best-known work 'The Ring of the Nibelung', the last two opera's in the cycle, 'Siegfried' and 'The Twilight of the Gods', are reproduced with colour plates by Arthur Rackham. Rackham's hauntingly dark illustrations, are perfectly suited to the drama - an epic story that charts the struggles of gods, heroes and mythical creatures loosely based on characters from the Norse sagas. Many of the earliest children's books, particularly those dating back to the 1850s and before, are now extremely scarce and increasingly expensive. Pook Press are working to republish these classic works in affordable, high quality, colour editions, using the original text and artwork so these works can delight another generation of children. About the Illustrator: Arthur Rackham (1867-1939) was one of the premier illustrators of the early 20th Century. He illustrated many books, the first of which was published in 1893. His humour, romance and soul made him the leading illustrator of the early twentieth century and his work is to be found in versions of almost every classic from Hansel and Gretel to The Tempest, from The Pied Piper to Peer Gynt. Characteristic of his work are gloomy forests of sinuous trees, nubile fairy maidens, and unsightly ogres and trolls. Throughout his career he developed a very individual style that was to influence a whole generation of children, artists and other illustrators. His haunting humour and dreamlike romance adds to the enchantment and fantasy of children's literature.


The Rhinegold & The Valkyrie

"The Rhinegold & The Valkyrie: The Ring of the Nibelung – Volume 1" is a modern (2011) English translation of the first 2 operas of German composer Richard Wagner’s Ring Cycle combined with 32 beautiful color illustrations by Arthur Rackham. Volume 2 with the remaining two operas will be available as a Kindle ebook shortly. This new translation makes it very easy to follow the storylines of "The Rhinegold" (Das Rheingold) and “The Valkyrie” (Die Walküre), as they are written in the modern style of English unlike the 100 year or older translations that are generally available. New fans of The Ring Cycle will be able to focus on the story rather than struggling to interpret the nuances of old English prose. The integrity of Wagner’s characters has been preserved and Rackham’s illustrations add another dimension, helping bring the characters to life while also portraying the fantastic settings that form the backdrop to the drama.

Very Fine and Very Near Fine. The Rhinegold And The Valkyrie has a couple of faint spots to one area of the gilded page edges near the corner. Each book is a wonderful bright clean copy free of any markings, writings, or stamps. Sharp corners that are not bumped. Tight and square spine. Unread books without any attached bookplates or indication of any removed.