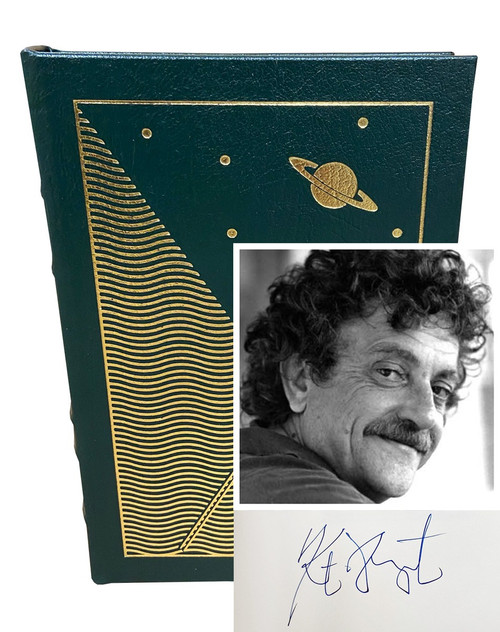 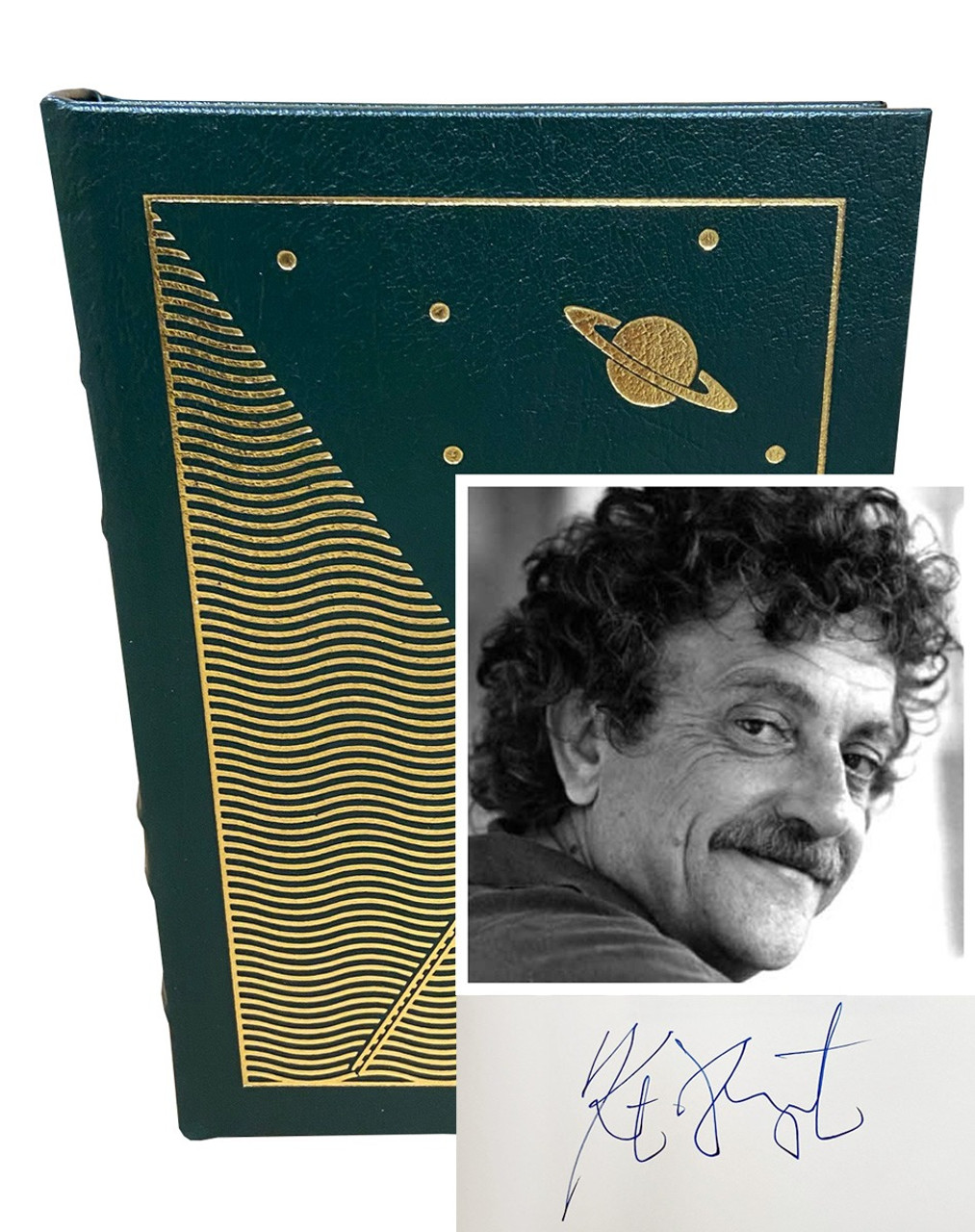 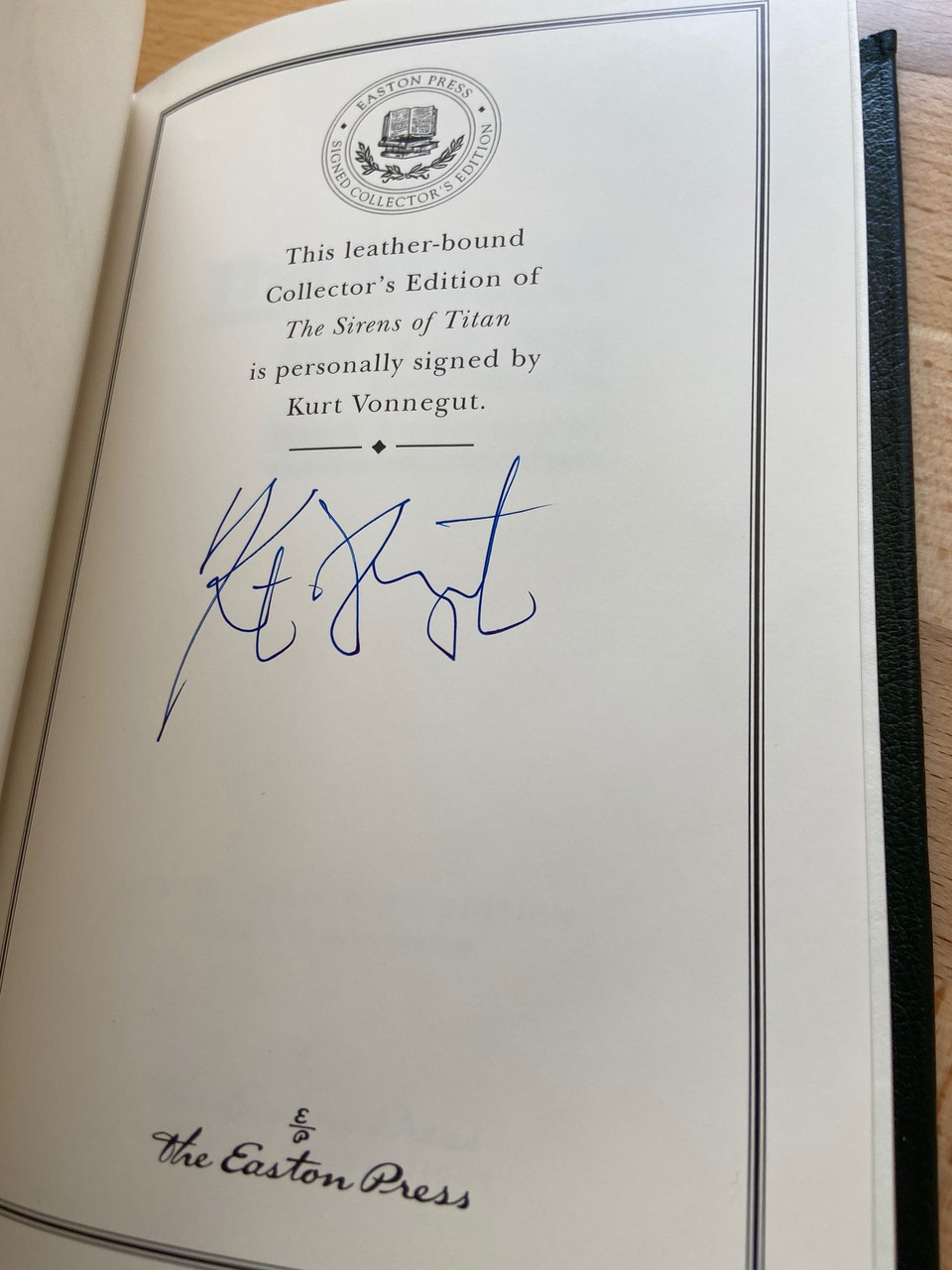 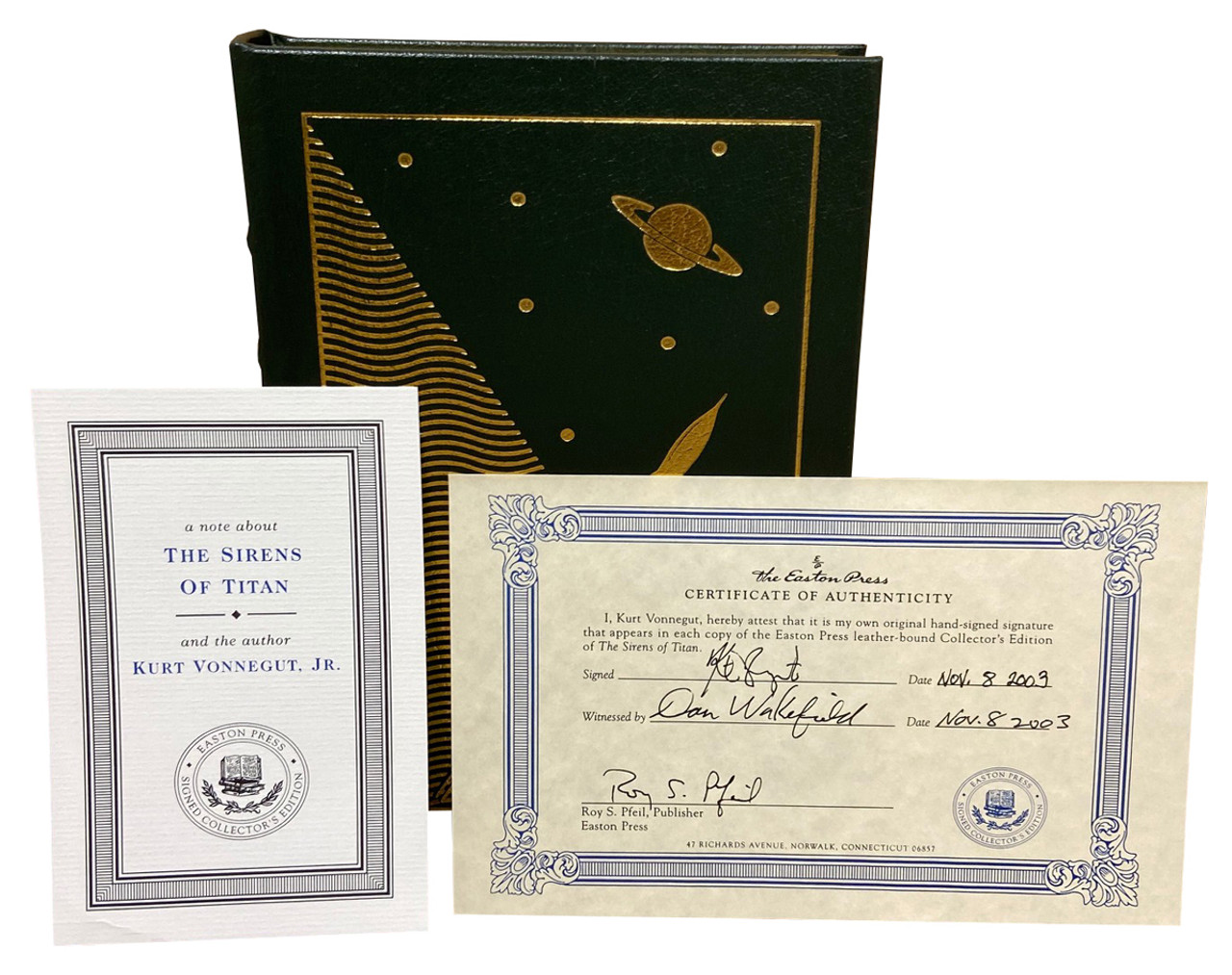 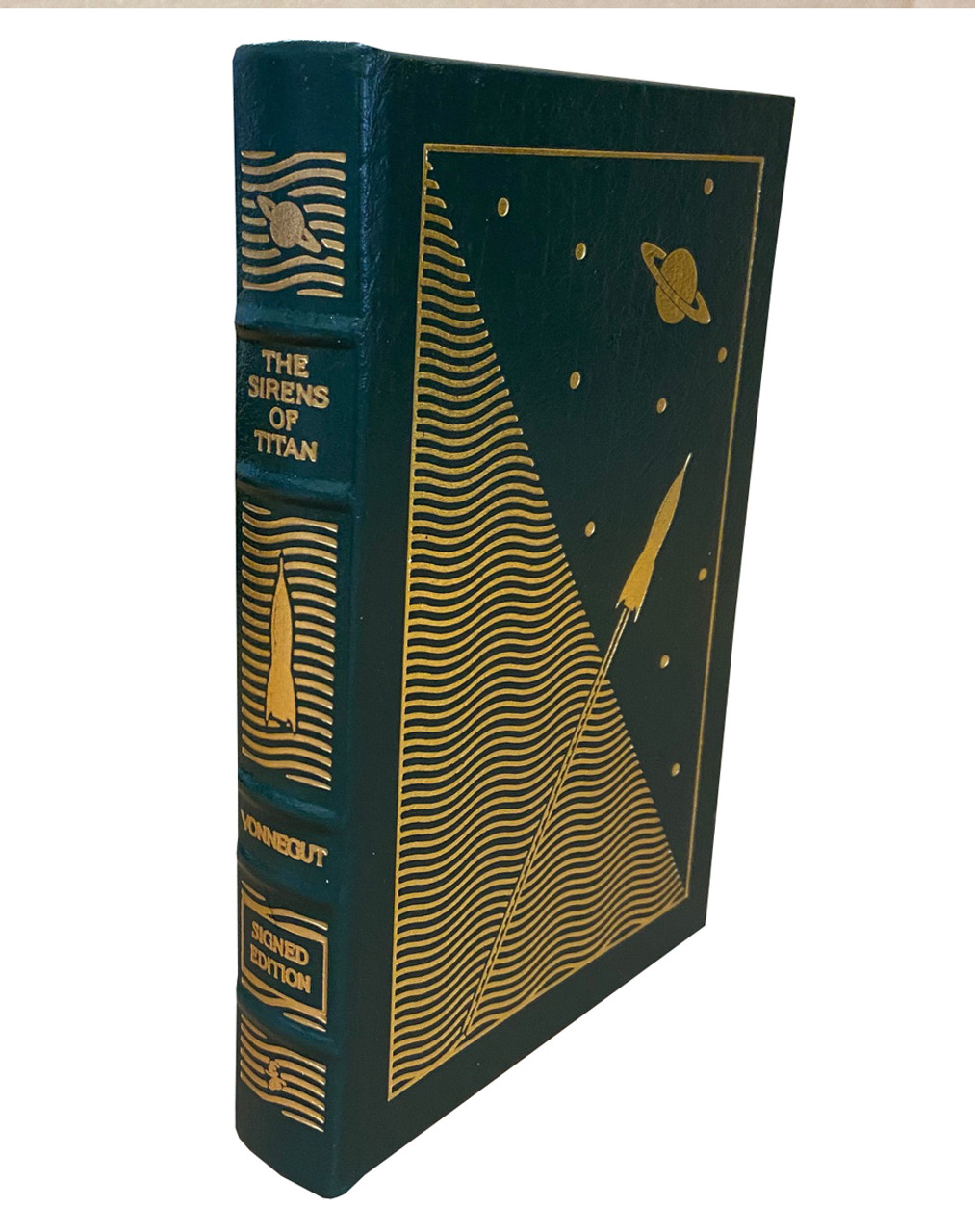 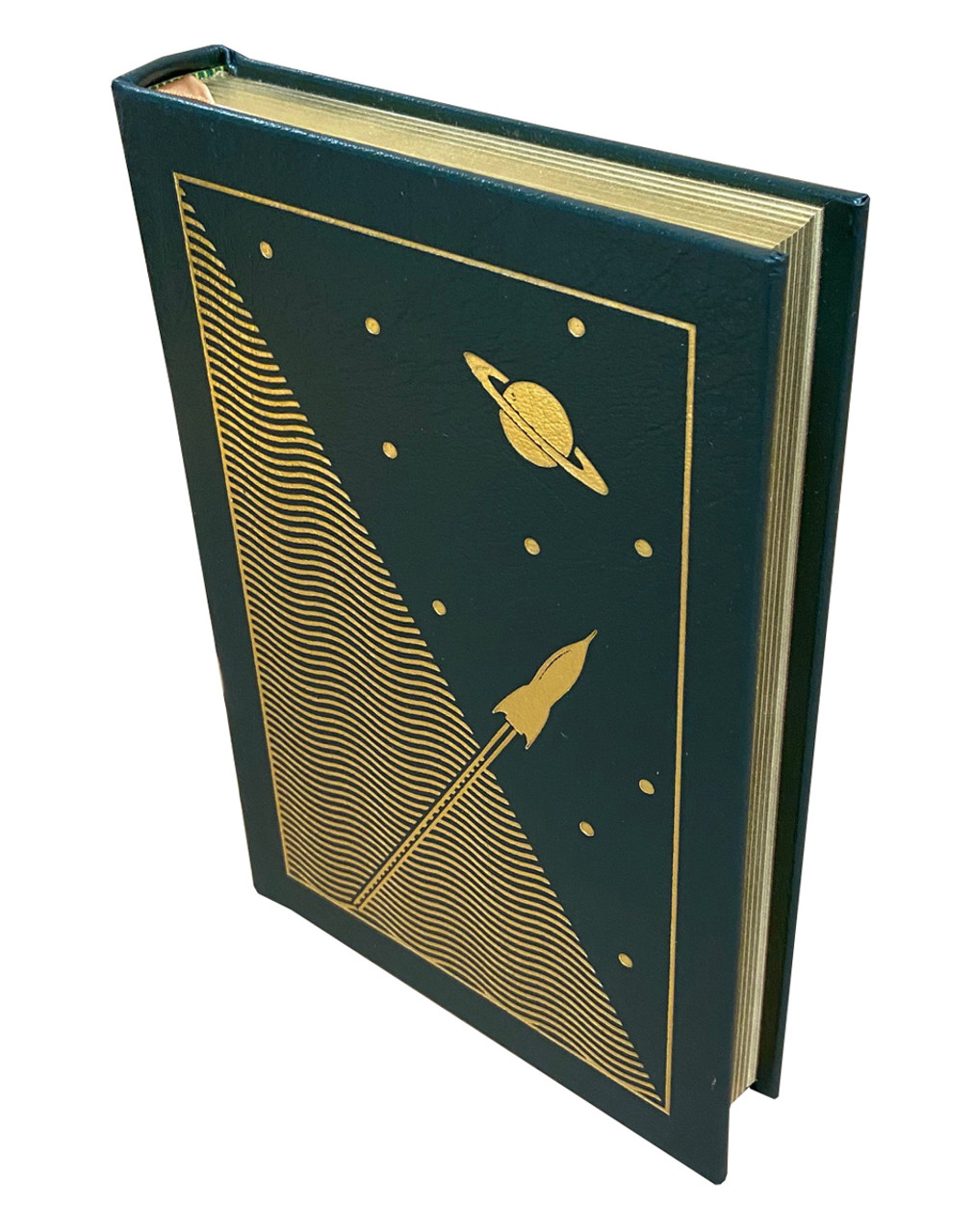 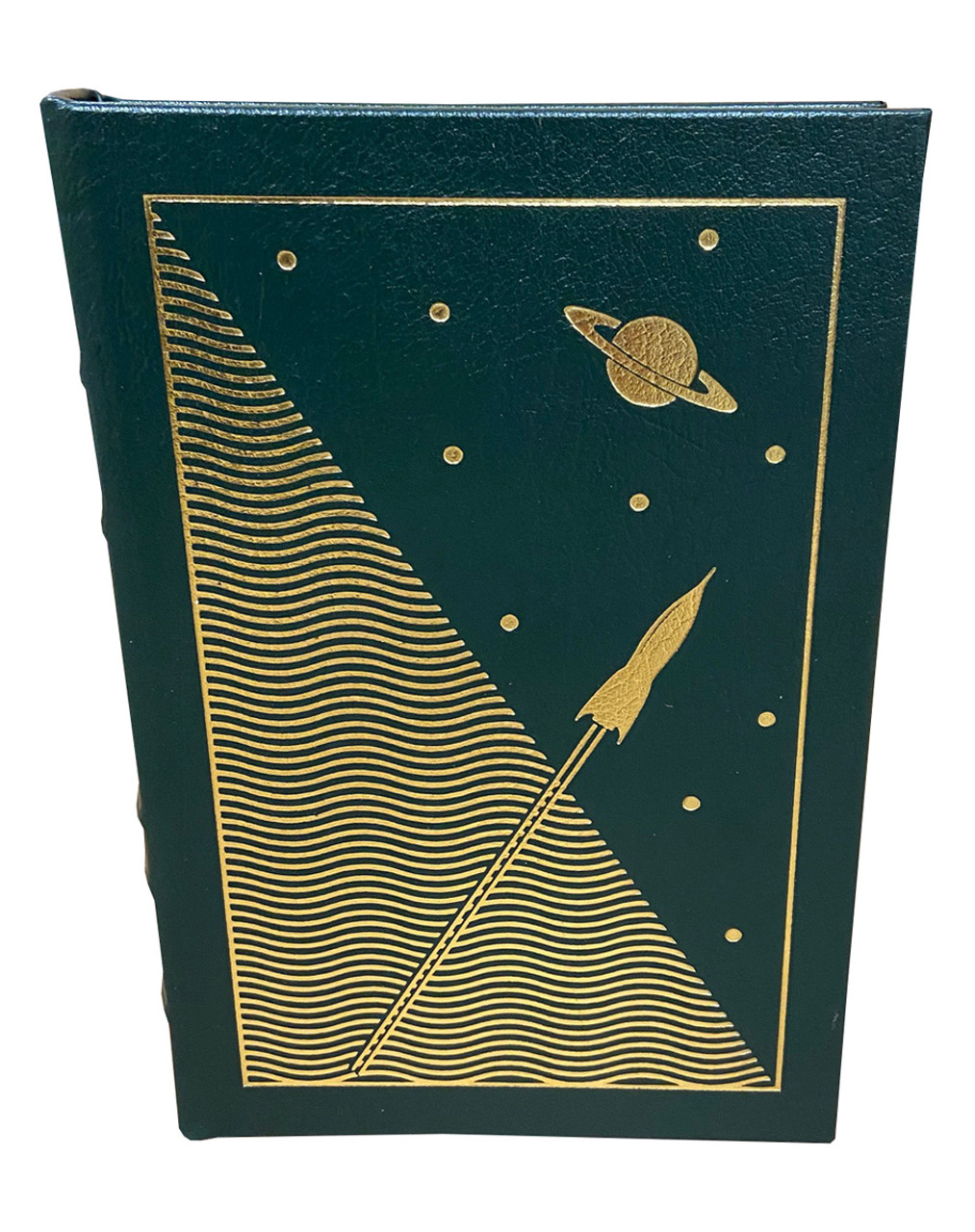 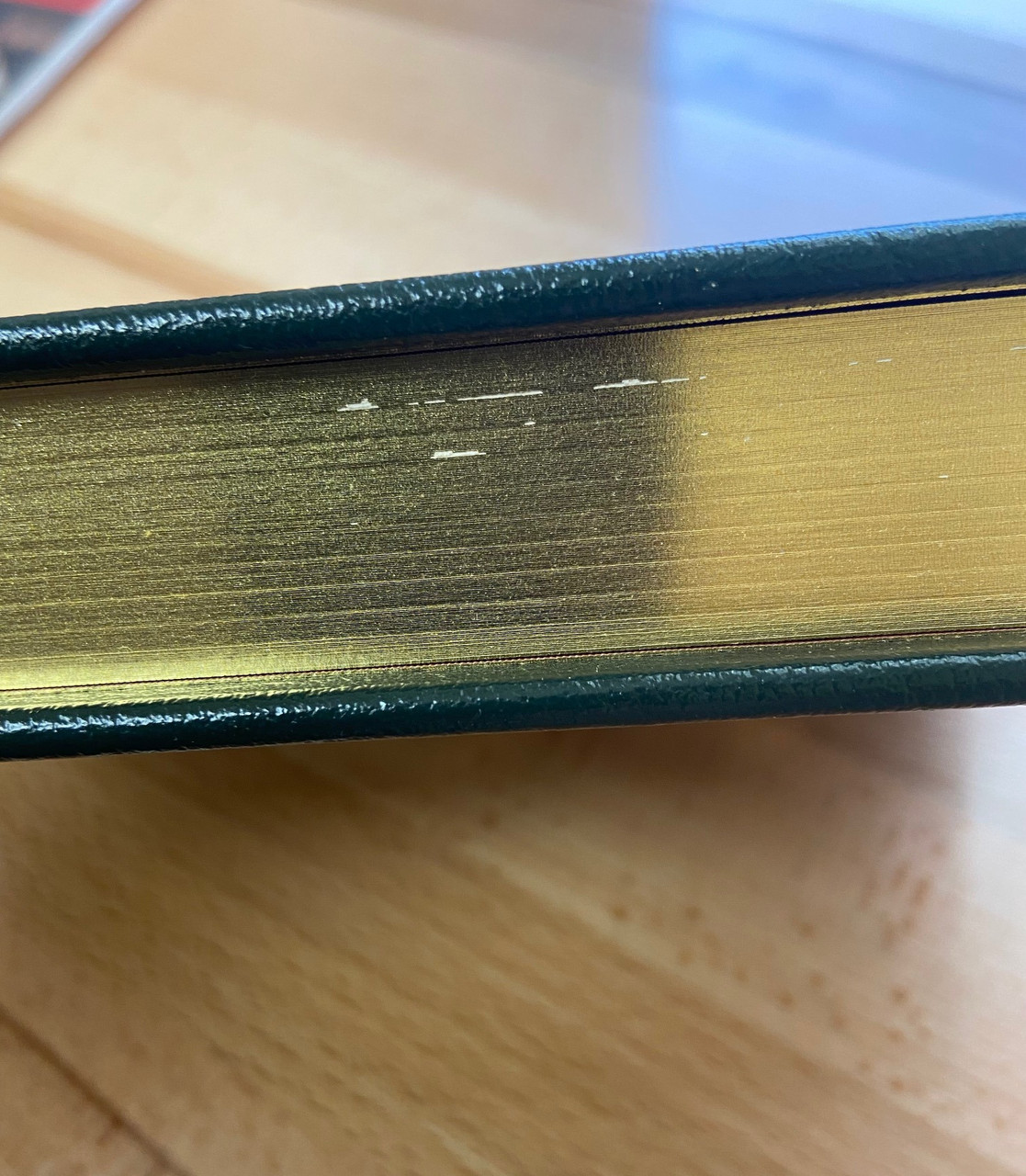 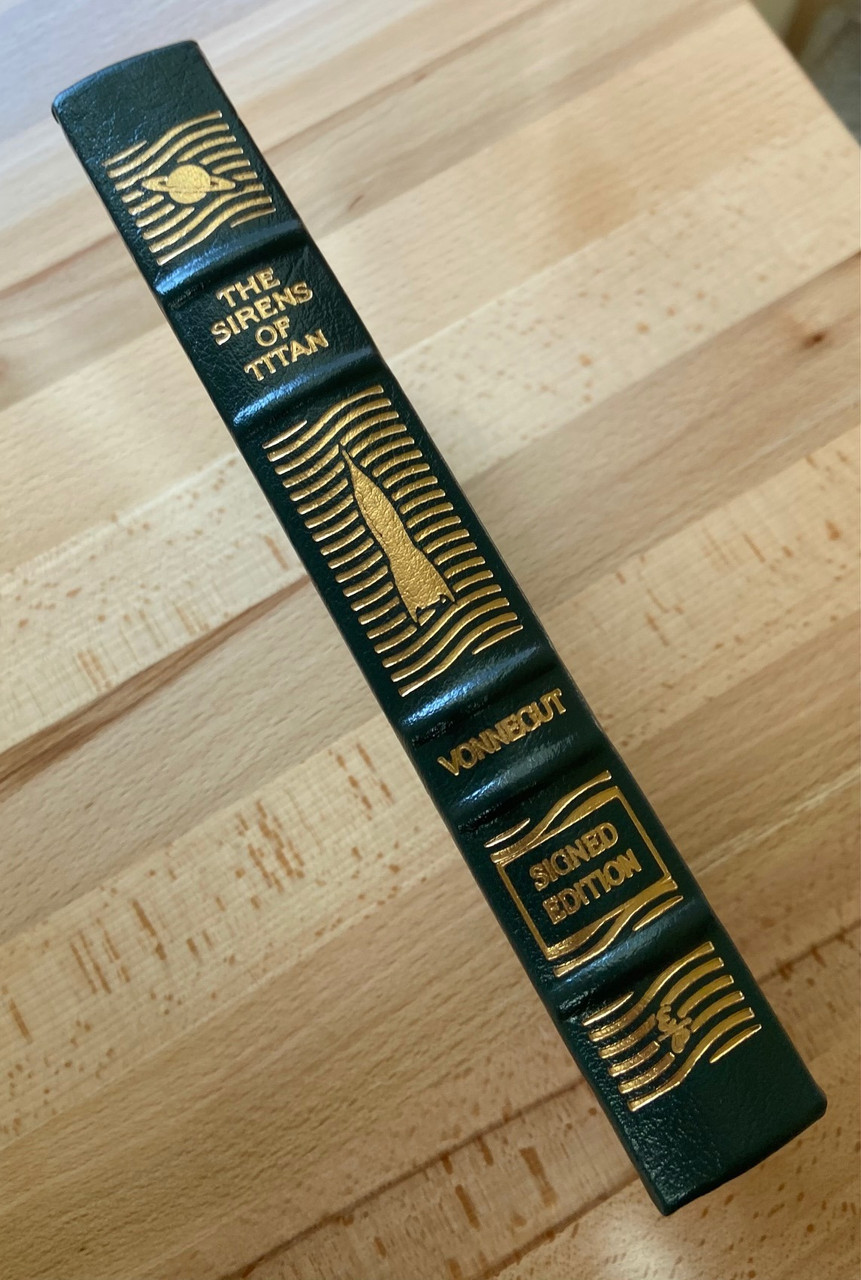 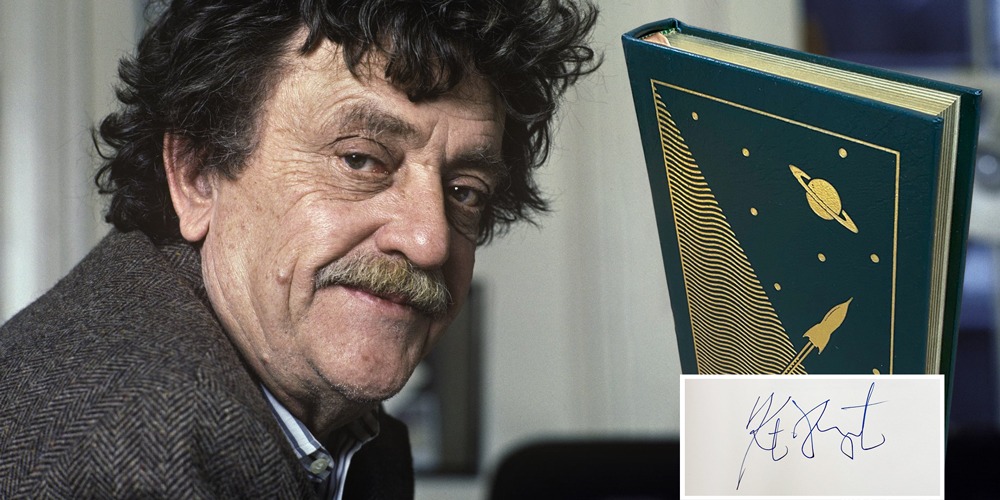 Norwalk, CT: The Easton Press 2003, Kurt Vonnegut "The Sirens of Titan" Hardcover SIGNED COLLECTOR'S EDITION. Leather-bound book accented with 22kt gold. Personally signed by Kurt Vonnegut on the special title page. An outrageous romp through space, time, and morality by one of the greatest writers of our time. Leather binding with no dust-jacket as issued. Includes COA (certificate of authenticity) and original collector's notes.

In Vonnegut's tale of the near future, a cold and malevolent universe is all that humanity can ever know. The richest and most depraved man on Earth takes a wild space journey to distant worlds, learning about the purpose of human life along the way.

Vonnegut considers this, his first novel, the only book that was pleasant to write. The richest man in America feels a calling to probe the depths of space. He leaves a life of unequaled indulgence to voyage through the solar system. He participates in a Martian invasion of Earth, mates with the wife of an astronaut who is adrift on the tides of time, and from start to finish follows the lure of the sirens of Titans.

Kurt Vonnegut Jr. ( November 11, 1922 – April 11, 2007) was an American writer. In a career spanning over 50 years, he published 14 novels, three short story collections, five plays, and five nonfiction works, with further collections being published after his death.

Born and raised in Indianapolis, Vonnegut attended Cornell University but withdrew in January 1943 and enlisted in the US Army. As part of his training, he studied mechanical engineering at the Carnegie Institute of Technology (now Carnegie Mellon University) and the University of Tennessee. He was then deployed to Europe to fight in World War II and was captured by the Germans during the Battle of the Bulge. He was interned in Dresden, where he survived the Allied bombing of the city in a meat locker of the slaughterhouse where he was imprisoned. After the war, he married Jane Marie Cox, with whom he had three children. He adopted his nephews after his sister died of cancer and her husband was killed in a train accident. He and his wife both attended the University of Chicago, while he worked as a night reporter for the City News Bureau.

Vonnegut published his first novel, Player Piano, in 1952. The novel was reviewed positively but was not commercially successful at the time. In the nearly 20 years that followed, he published several novels that were well regarded, two of which (The Sirens of Titan [1959] and Cat's Cradle [1963]) were nominated for the Hugo Award for best SF or Fantasy novel of the year. He published a short story collection titled Welcome to the Monkey House in 1968. His breakthrough was his commercially and critically successful sixth novel, Slaughterhouse-Five (1969). The book's anti-war sentiment resonated with its readers amidst the ongoing Vietnam War and its reviews were generally positive. After its release, Slaughterhouse-Five went to the top of The New York Times Best Seller list, thrusting Vonnegut into fame. He was invited to give speeches, lectures, and commencement addresses around the country, and received many awards and honors.

Later in his career, Vonnegut published several autobiographical essays and short-story collections, such as Fates Worse Than Death (1991) and A Man Without a Country (2005). After his death, he was hailed as one of the most important contemporary writers and a dark humor commentator on American society. His son Mark published a compilation of his unpublished works, titled Armageddon in Retrospect, in 2008. In 2017, Seven Stories Press published Complete Stories, a collection of Vonnegut's short fiction, including five previously unpublished stories. Complete Stories was collected and introduced by Vonnegut friends and scholars Jerome Klinkowitz and Dan Wakefield. Numerous scholarly works have examined Vonnegut's writing and humor. 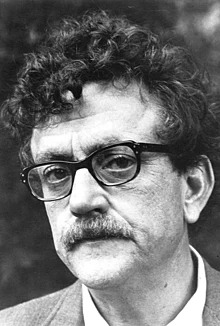 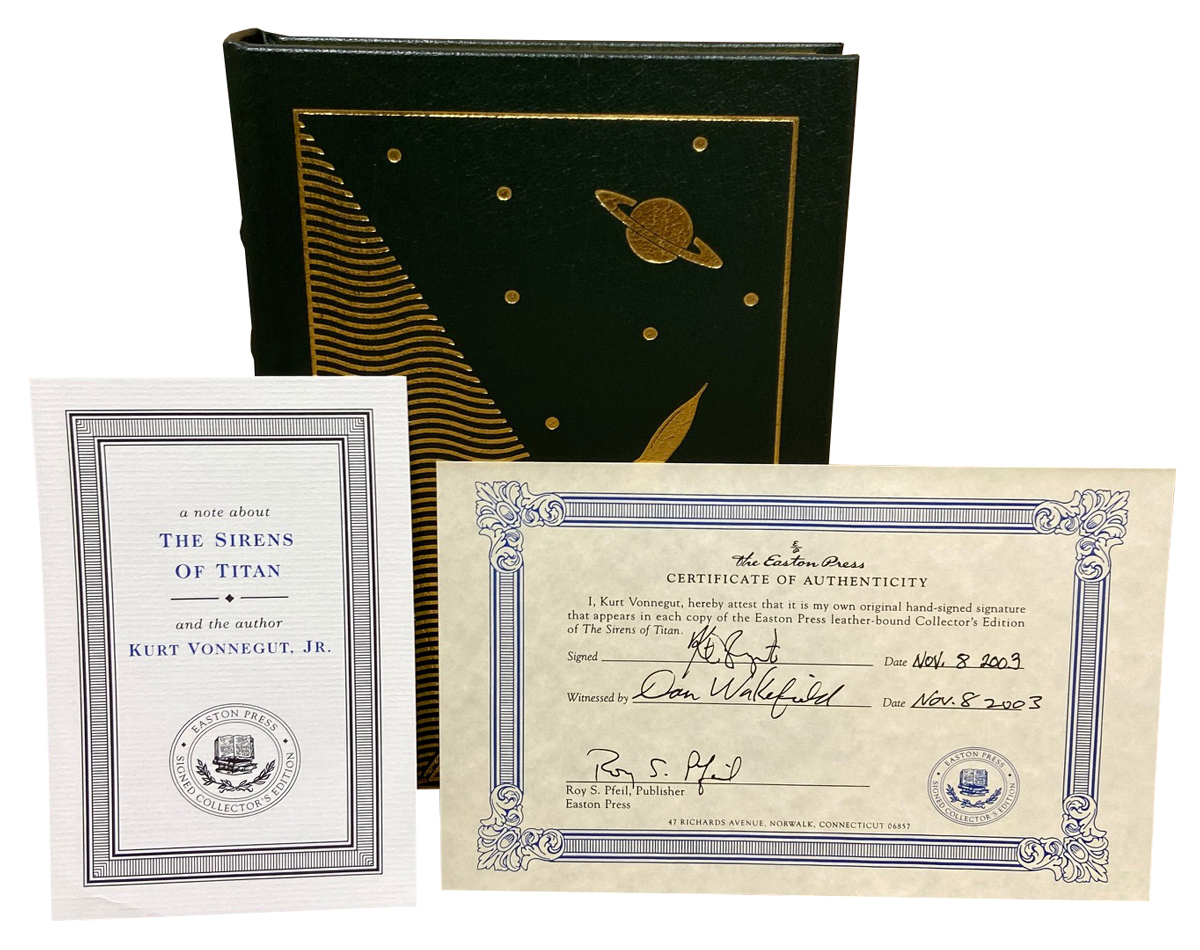 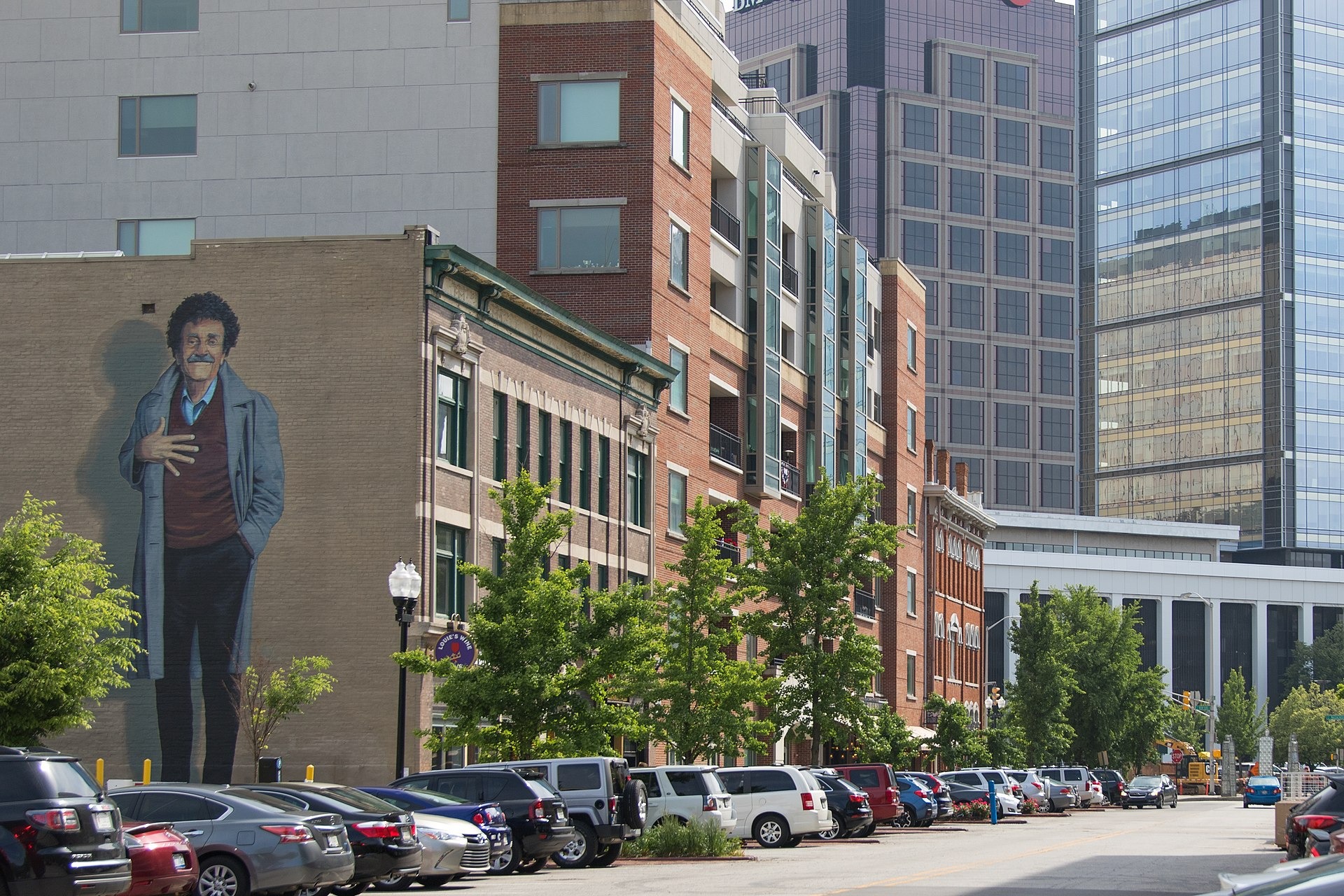 A large painting of Vonnegut on Massachusetts Avenue, Indianapolis, blocks away from the Kurt Vonnegut Museum and the Rathskeller, which was designed by his family's architecture firm.

Very Fine- with a couple of minor superficial marks on the gilded page edges as shown. Unread book with a square and tight spine. Sharp corners. A wonderful bring clean copy. Two small marks to the leather in the corner. No bookplates attached or indication of any removed. No other writing, marks, or stamps. The graphics are clean and not faded.