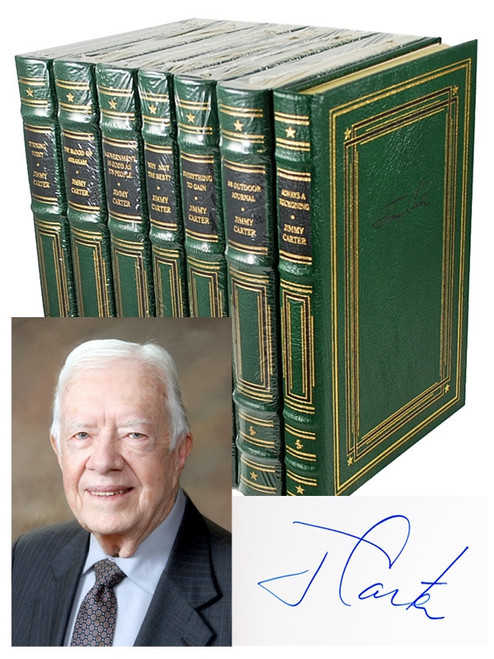 A wonderful signed limited heirloom collection to showcase in your presidential library. Each volume is luxuriously bound in full genuine leather. An ideal retirement gift for yourself or a for loved one. Very fine without any flaws.

Always a Reckoning has been personally hand signed by President Jimmy Carter on a special limitation page. This is number 1,025 of only 3,000 produced.

A complete and matching set that includes:

1. Why Not the Best?
2. Everything to Gain?
3. An Outdoor Journal
4. Turning Point
5. Government as Good As it's People
6. The Blood of Abraham
7. Always a Reckoning (Signed Limited Edition)

Why Not The Best? - This book is the campaign biography which helped elect Jimmy Carter in 1976. He takes the title from the question Adm. Rickhover asks of all naval cadets, 'in your life was there ever a time in which you did less than the best?'

He would follow up the question with "Why not the best?" as a way to focus young men, including James Earl Carter, on striving for exellence. The book outlines in detail what Carter would later refer to as his "sources of strength." This book is a must read for those who feel Jimmy Carter is a model of public service, an outstanding peacemaker.

Everything to Gain? - A dual account of the former president and first lady describes their post-White House careers and highlights such topics as midlife marriage, America's health-care issues, the efforts of the Carter Center, and more. Original.

From the Inside Flap: For Jimmy and Rosalynn Carter, the transition from the White House to Plains, Georgia, was painful.

Everything to Gain is their warm and unpretentious account of their successful adjustment to a new life, full of encouragement and insight for any couple wanting to renew their commitment to each other and to life.

An Outdoor Journal - From Publishers Weekly
Carter regards fly-fishing as one of the most gratifying activities of his life; he devotes half of this journal to that noble sport. Fishin' and huntin' were basic skills for boys in the rural South; in the Depression era, fish and game provided food and were recognized as farm produce. The former President reminisces about his childhood in Plains, Ga. fishing with his daddy and learning to hunt, encounters with rattlesnakes and getting lost in the woods.

He charts his and his wife's progress in fly-fishing and takes us on piscatorial peregrinations to Camp David, Japan, New Zealand, Europe; every journey had to allow for a few hours or days with the rod. This memoir has something for venators, too, as the author discourses on game birds: the elusive ruffed grouse, the turkey and the bobwhite. There is one digression from sporting activities when the Carters join a trekking tour to Nepal; the weather was terrible, and many of the group suffered from altitude sickness. Finally, Carter describes the family's mountain retreat in North Georgia. This book is the work of a contented man.

Government as Good As it's People - From Publishers Weekly: It is astounding how little attention has been paid to Jimmy Carter's life before, during and after his presidency?by publishers and biographers. University of Georgia sociologist Morris tries to fill the void with this thematic biography of a U.S. leader generally seen as a failure in office and a success as a statesman after defeat at the polls. Morris succeeds as an intellectual biographer but largely fails as the teller of a life story. He admires Carter as an above-board moralist during an age when such a persona could have been drowned by cynicism. But Morris is also convincing when he suggests that Carter's moralism didn't suit the country's needs during the last half of the 1970s.

Morris is especially critical of Carter's failure to formulate and convey a platform for domestic policy reform. A president cannot, should not, try to govern with a foreign policy vision only, Morris asserts. While his decision to plumb the depths of Carter's moral lobe is a wise one, he could have done so while also giving more consideration to the events in Carter's life. That glossing of externalities often makes it difficult to understand Carter's moral judgments. Although Morris leaves the field open for a more thorough recounting of Carter's life before and during his presidency, his treatment of Carter at age 70 does offer satisfying insights.

The Blood of Abraham - Since his earliest days in the White House, Jimmy Carter has demonstrated an untiring passion for pursuing peace in the Middle East. His formation of the Carter Center and his continuing prominent role in world affairs has done nothing to dampen that passion. In this new edition with an updated afterword and chronology, President Carter demystifies the history of the political expectations of each nation in the Middle East, the reasons for their different goals, and the nature of their prime concerns. His landmark study provides an enlightened and reconciling vision for all--Jews, Muslims, and Christians--who share the blood of Abraham.
From the Publisher
A popular history of the Middle East, now updated From the Back Cover

Easton Press guarantees the signature to be authentic as part of their Library of the Presidents collection. Jimmy Carter has personally signed this book with his own hand. It is not an auto-pen or a signature stamp. learn more
VERY FINE GUARANTEED

All seven volumes are in As New condition, six of them sealed in the original shrink-wrap. Mint and flawless. The condition is of the highest quality. Includes unattached bookplate for your own personalization. No bumped corners or any scratches to the gilded page edges.