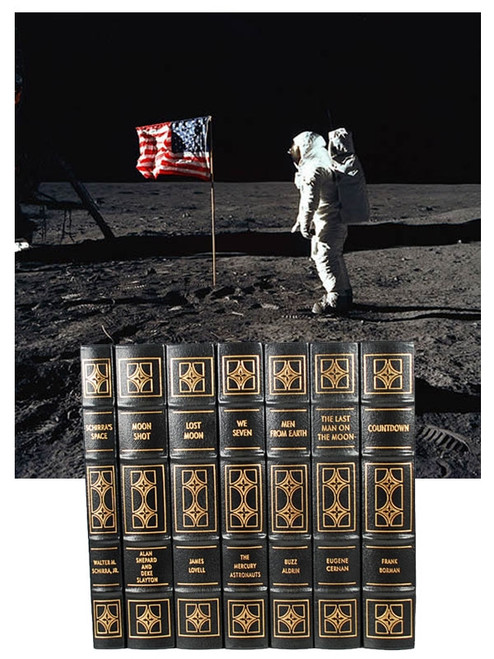 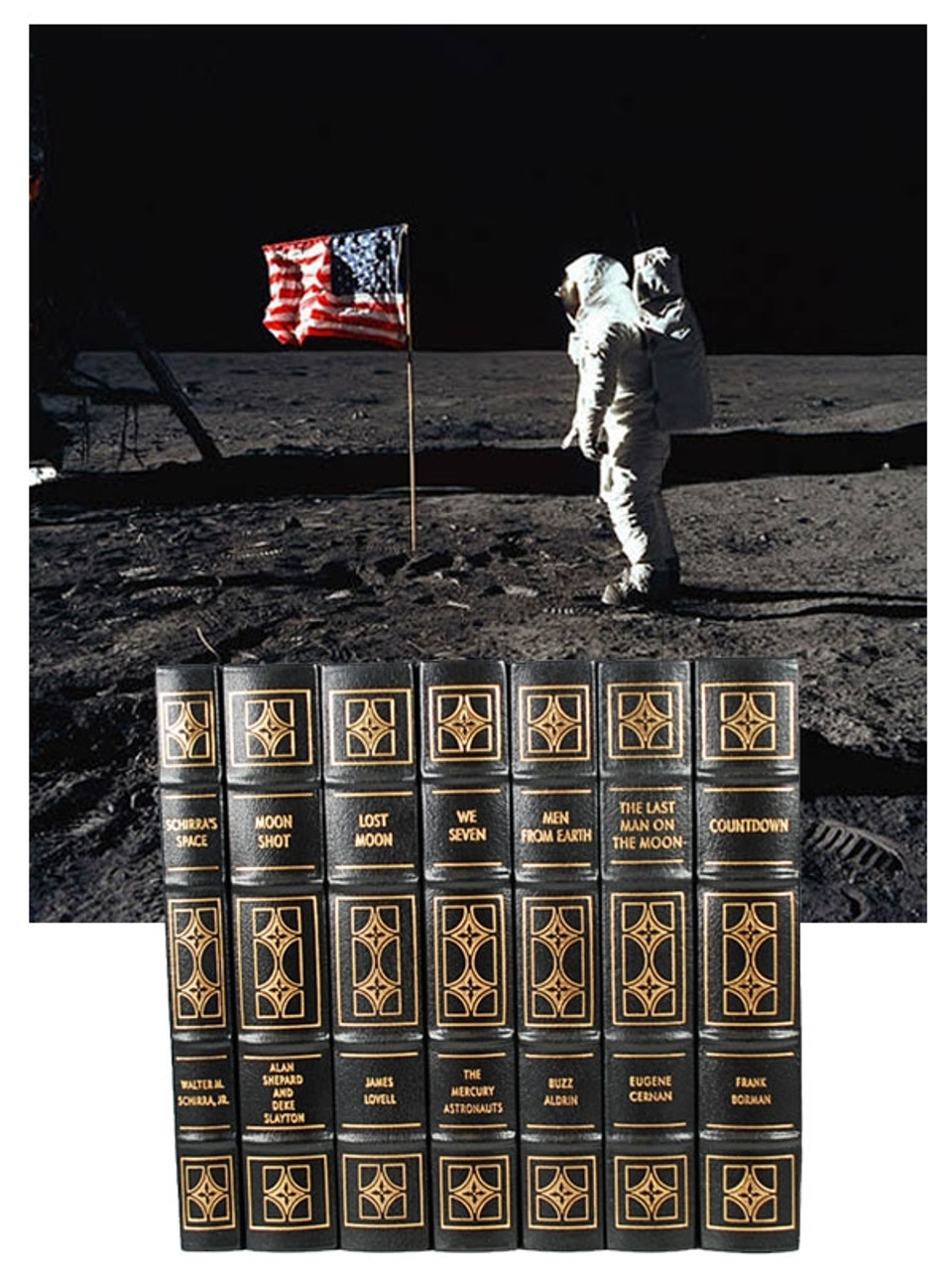 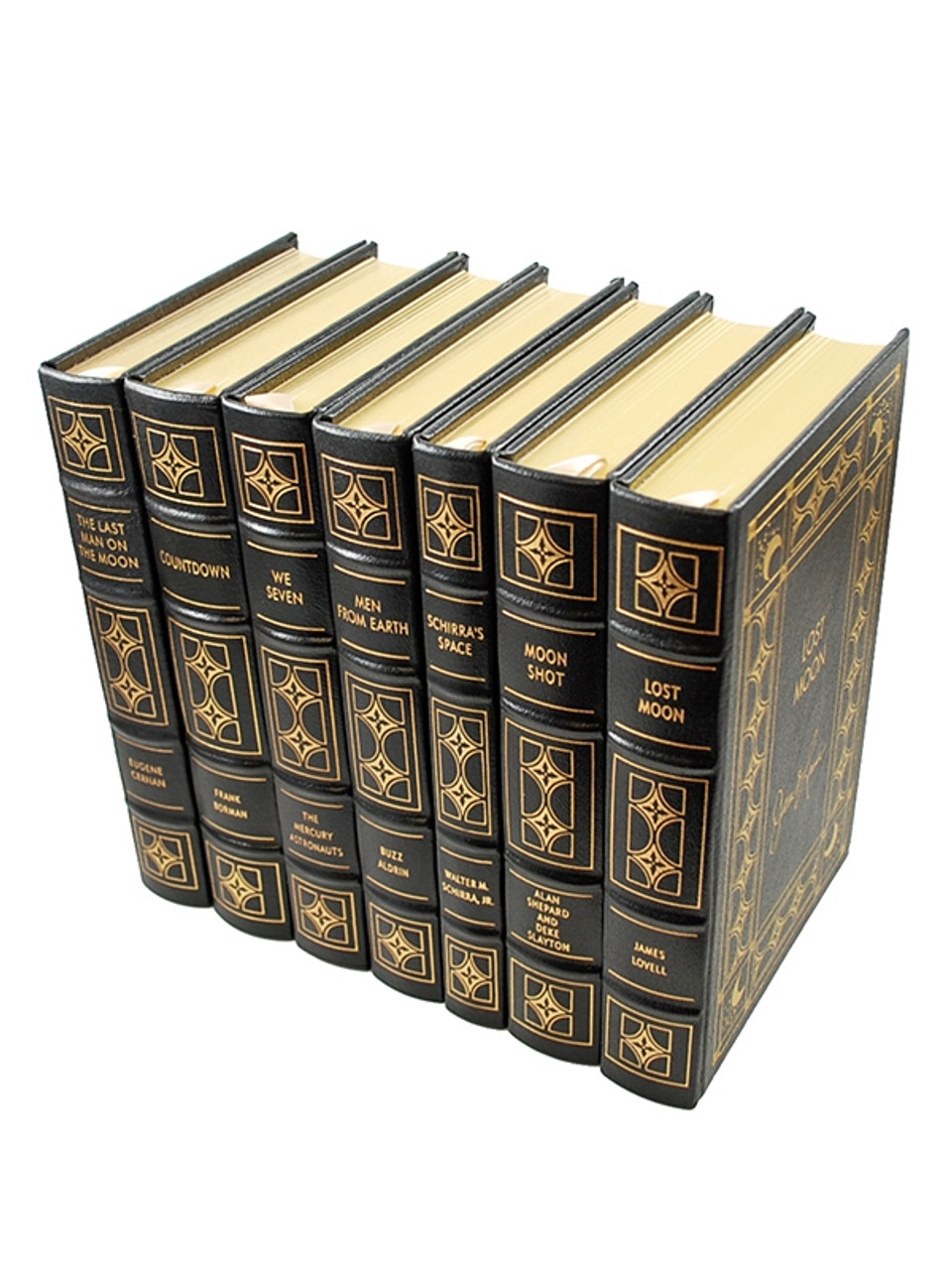 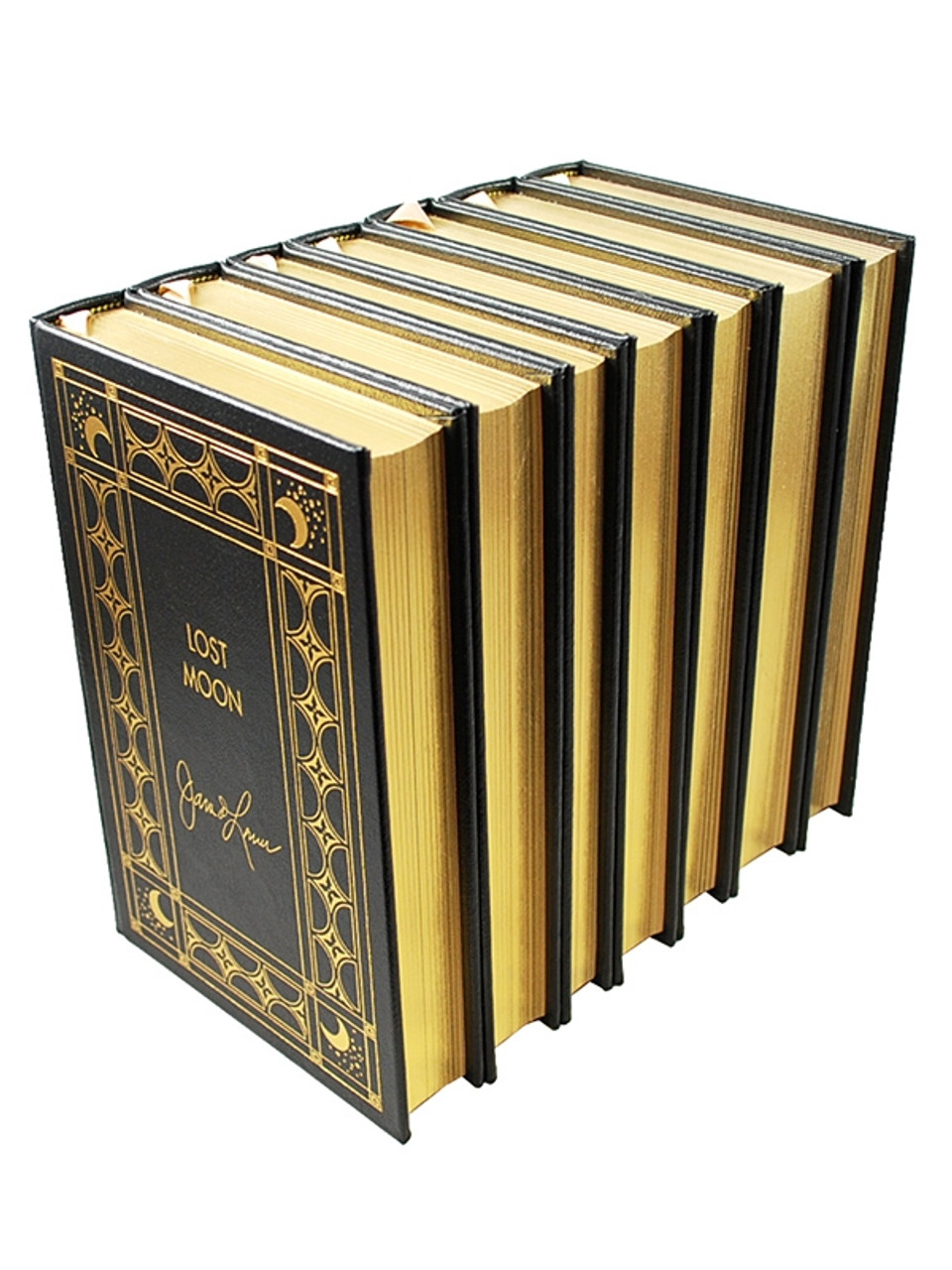 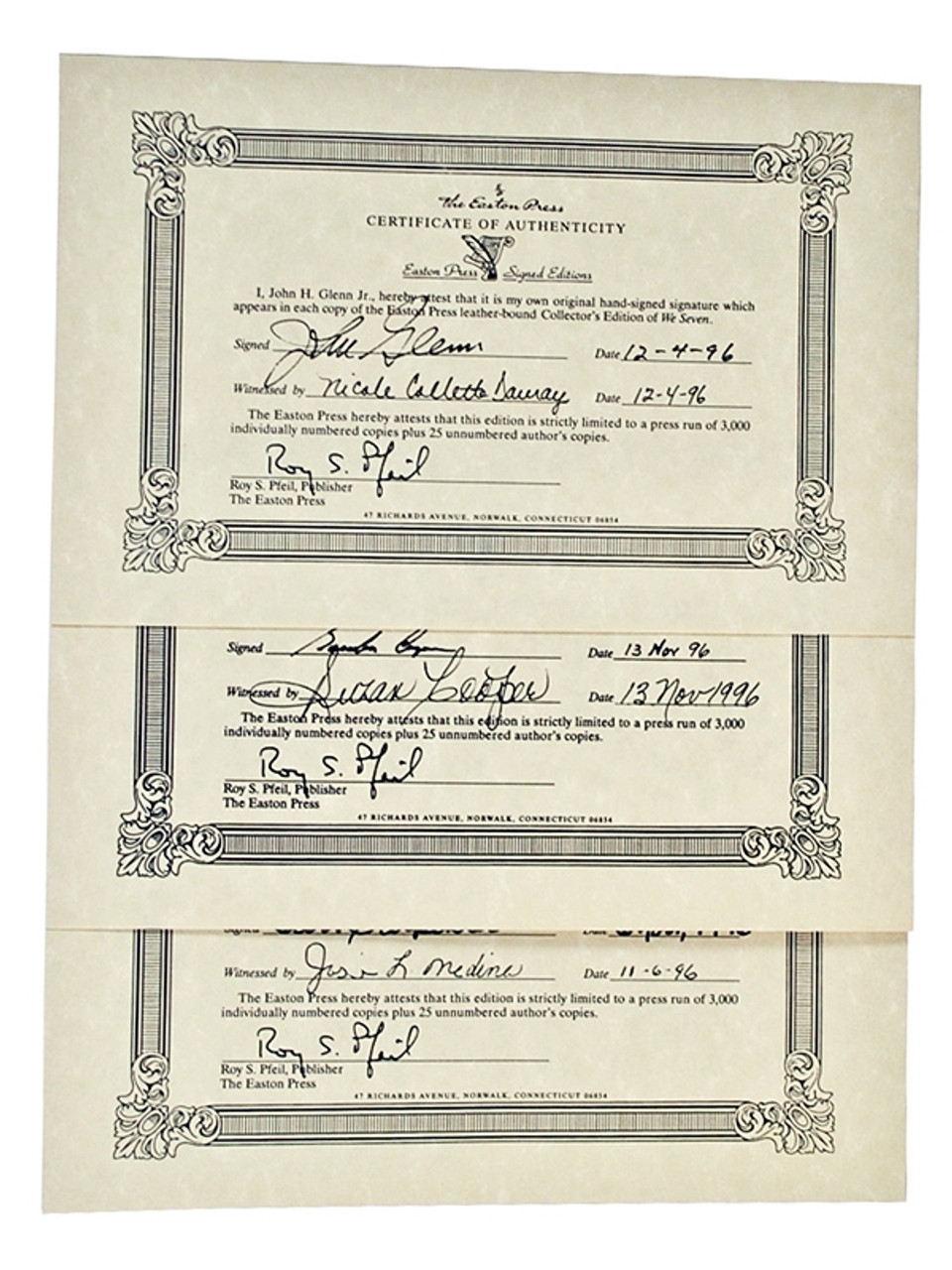 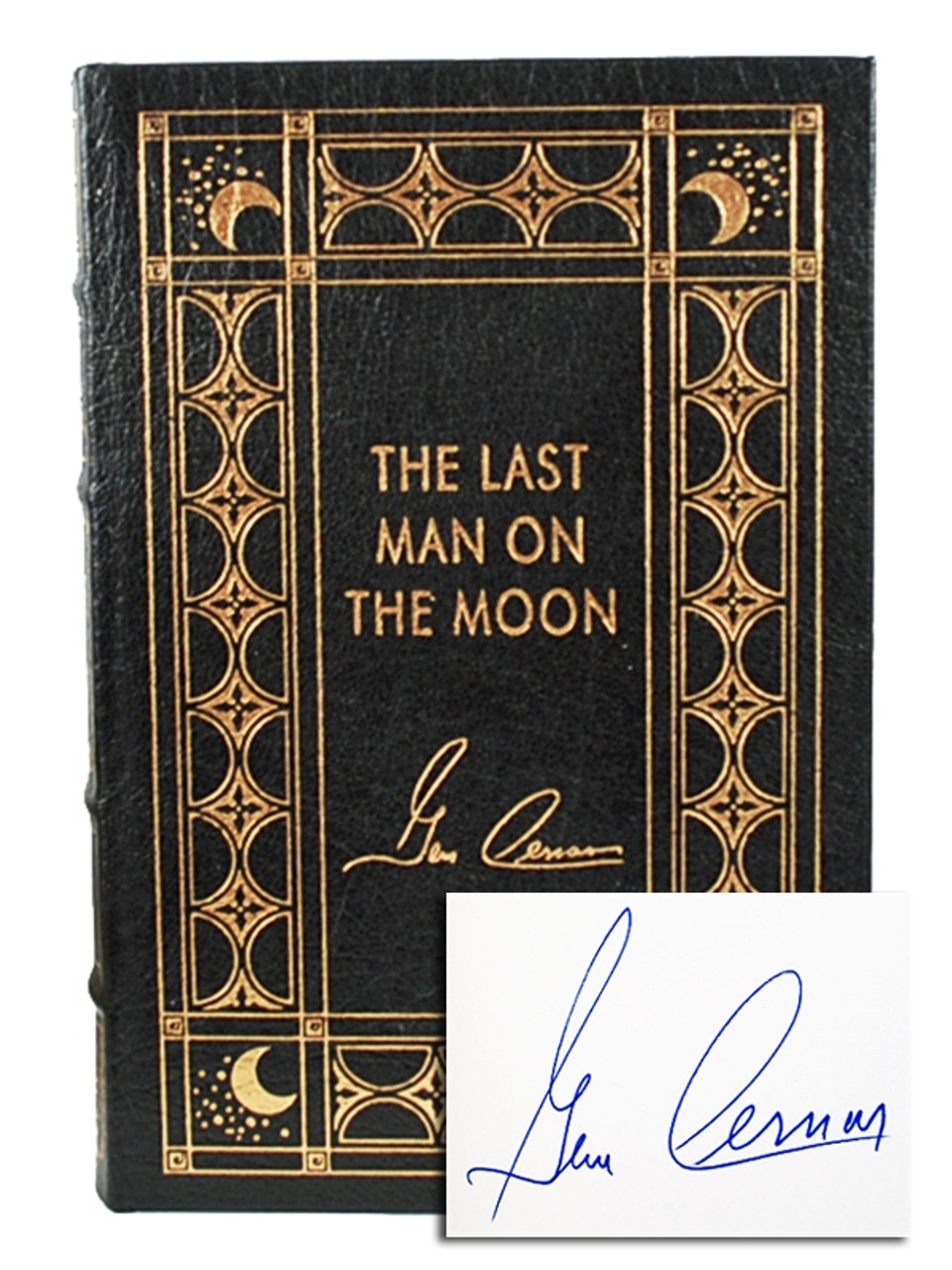 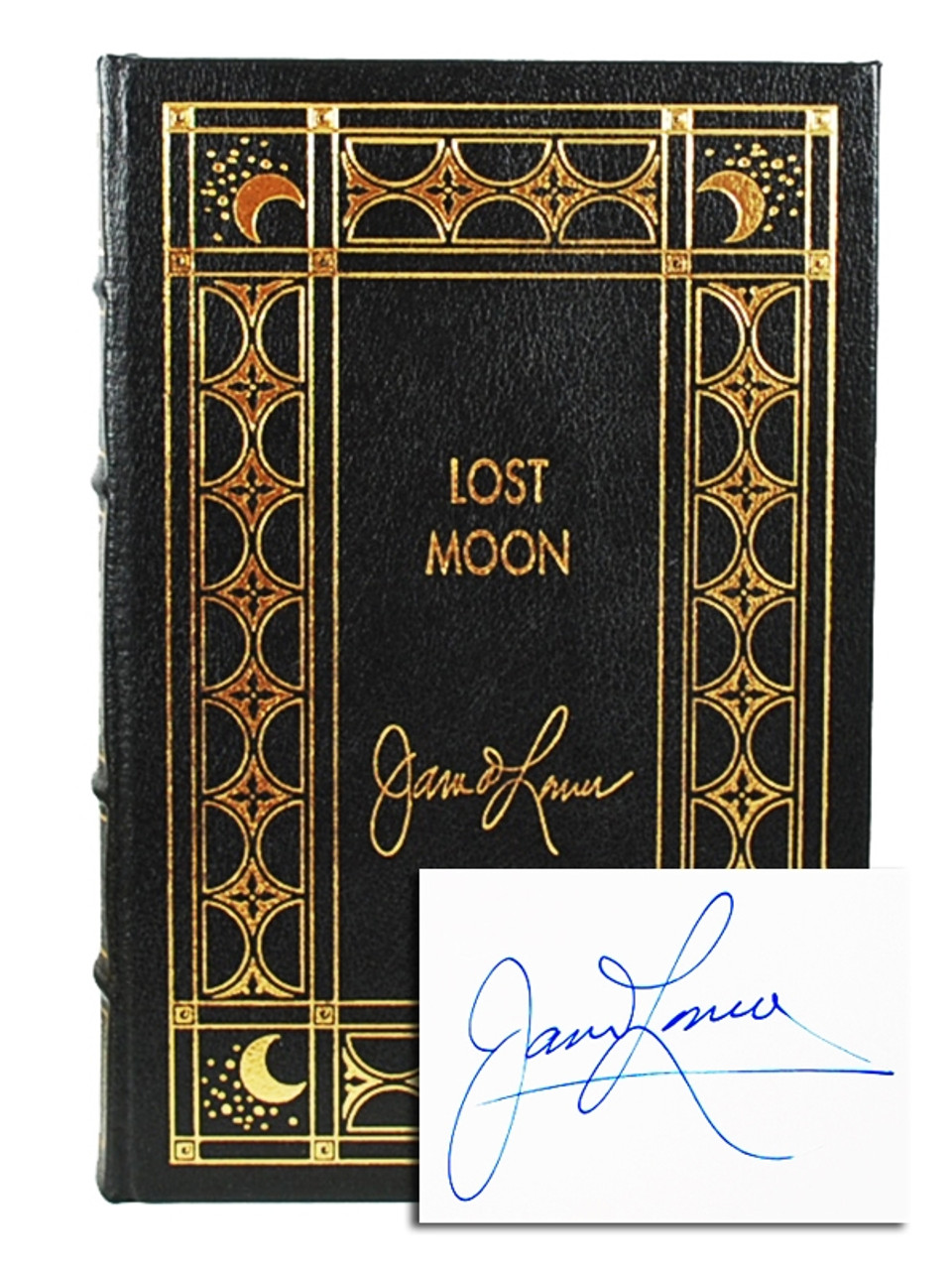 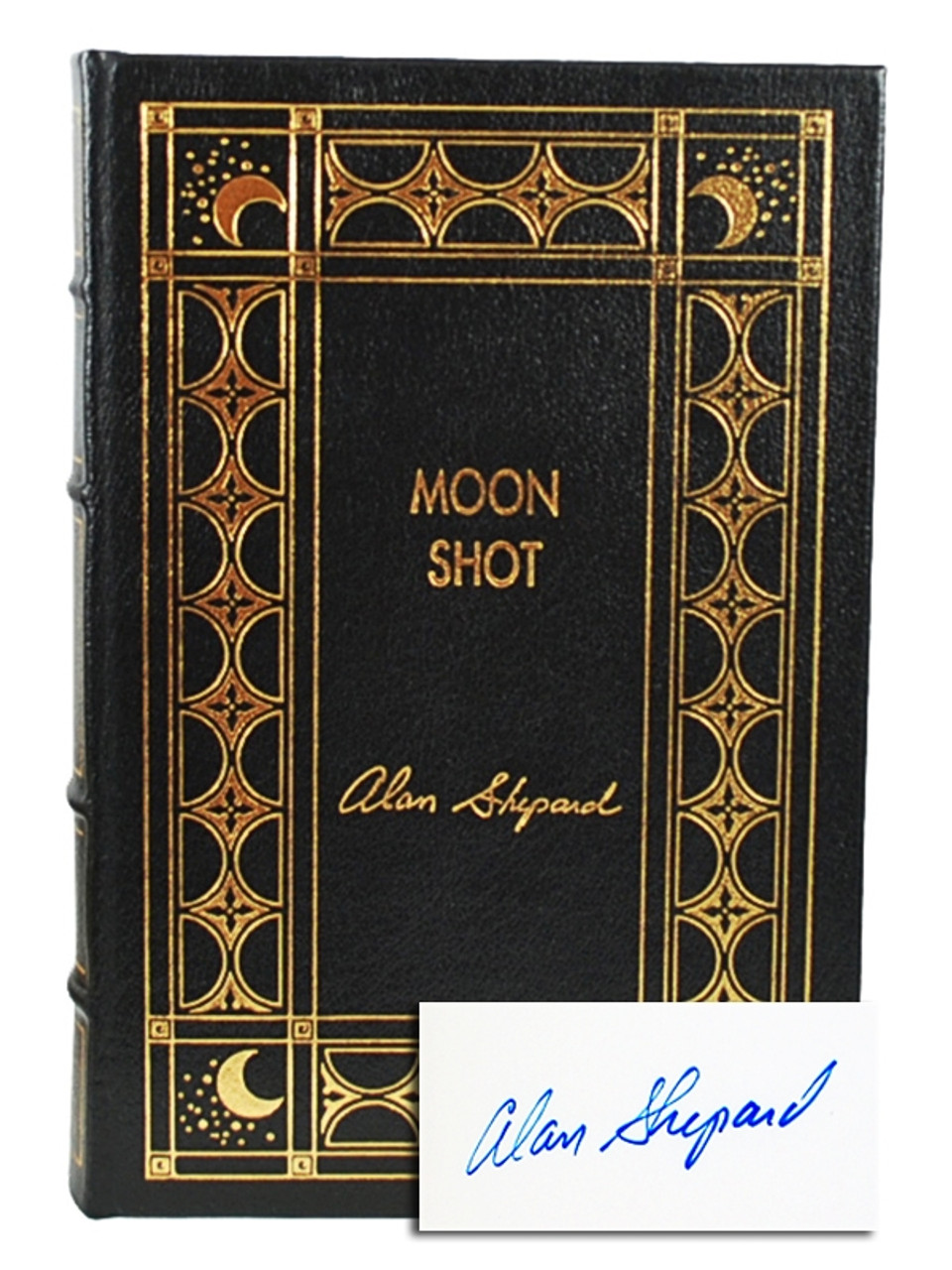 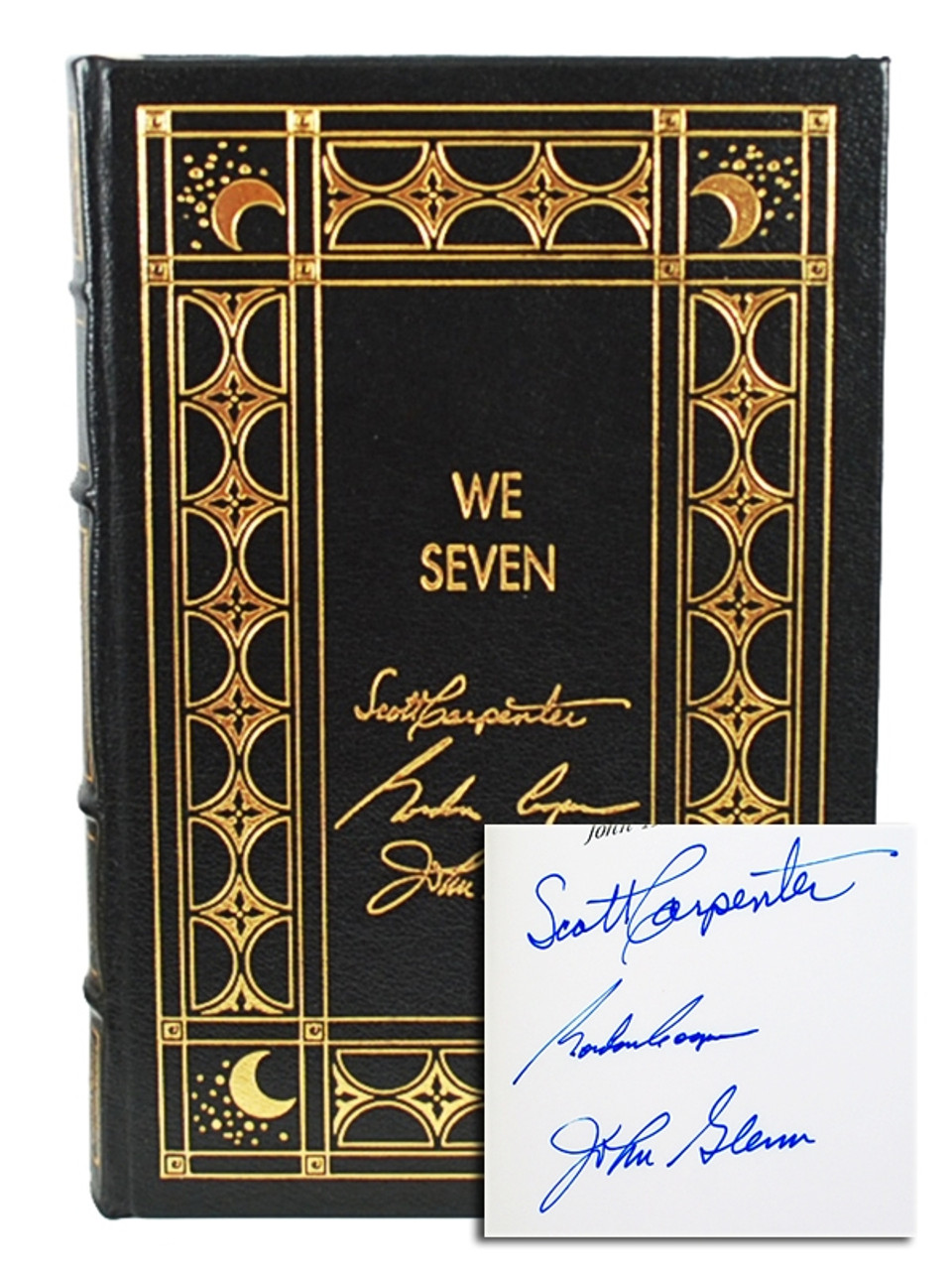 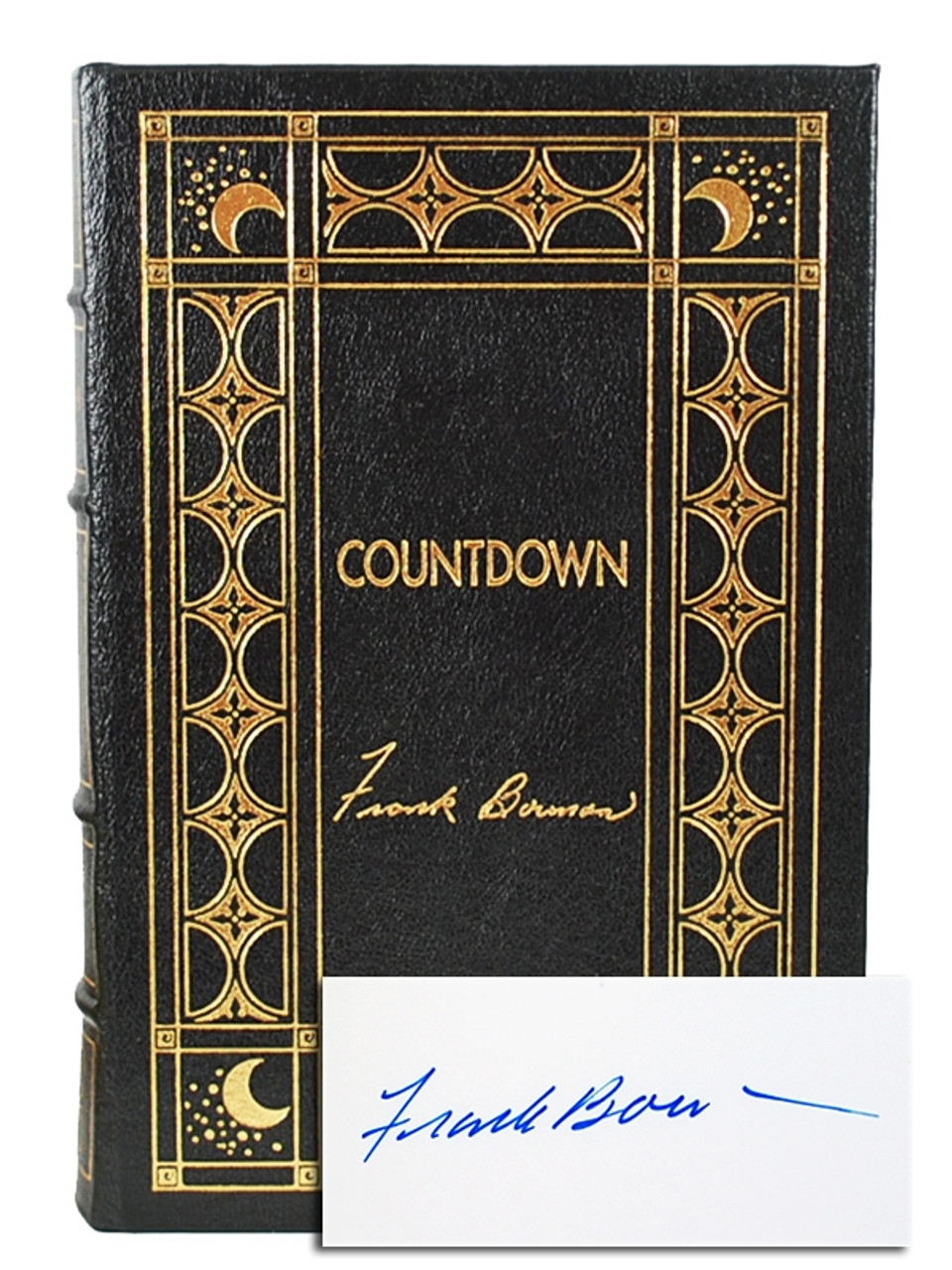 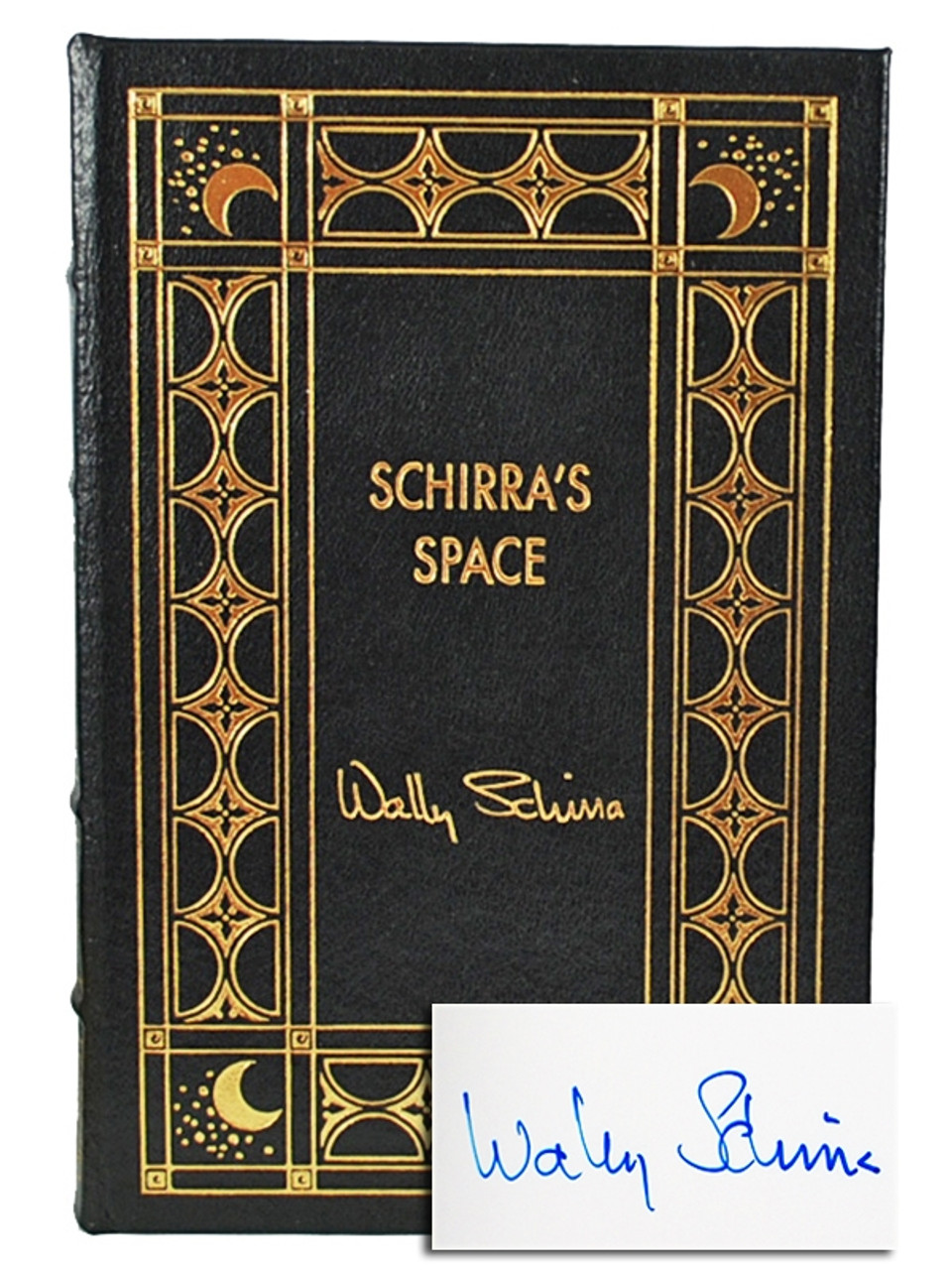 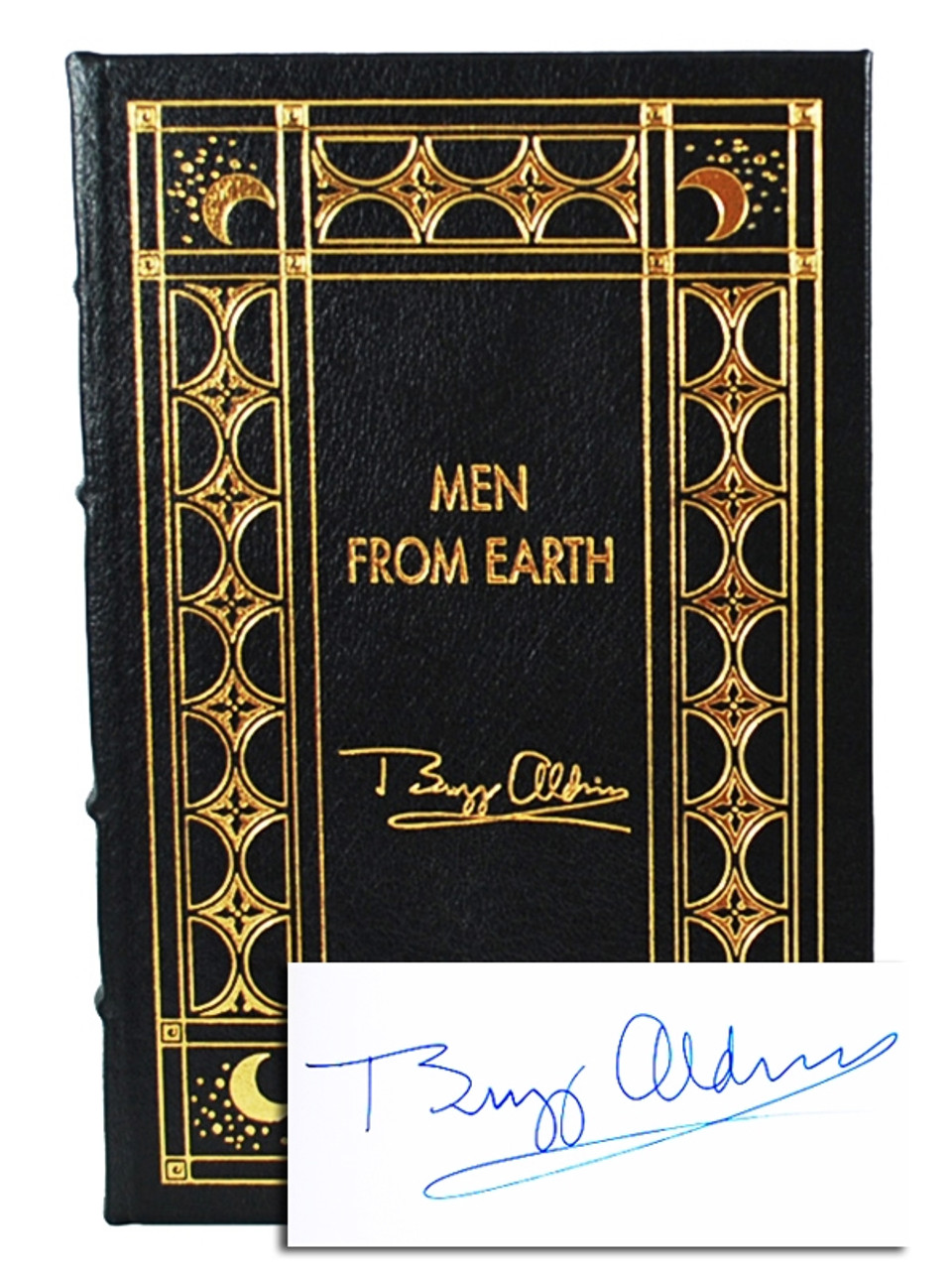 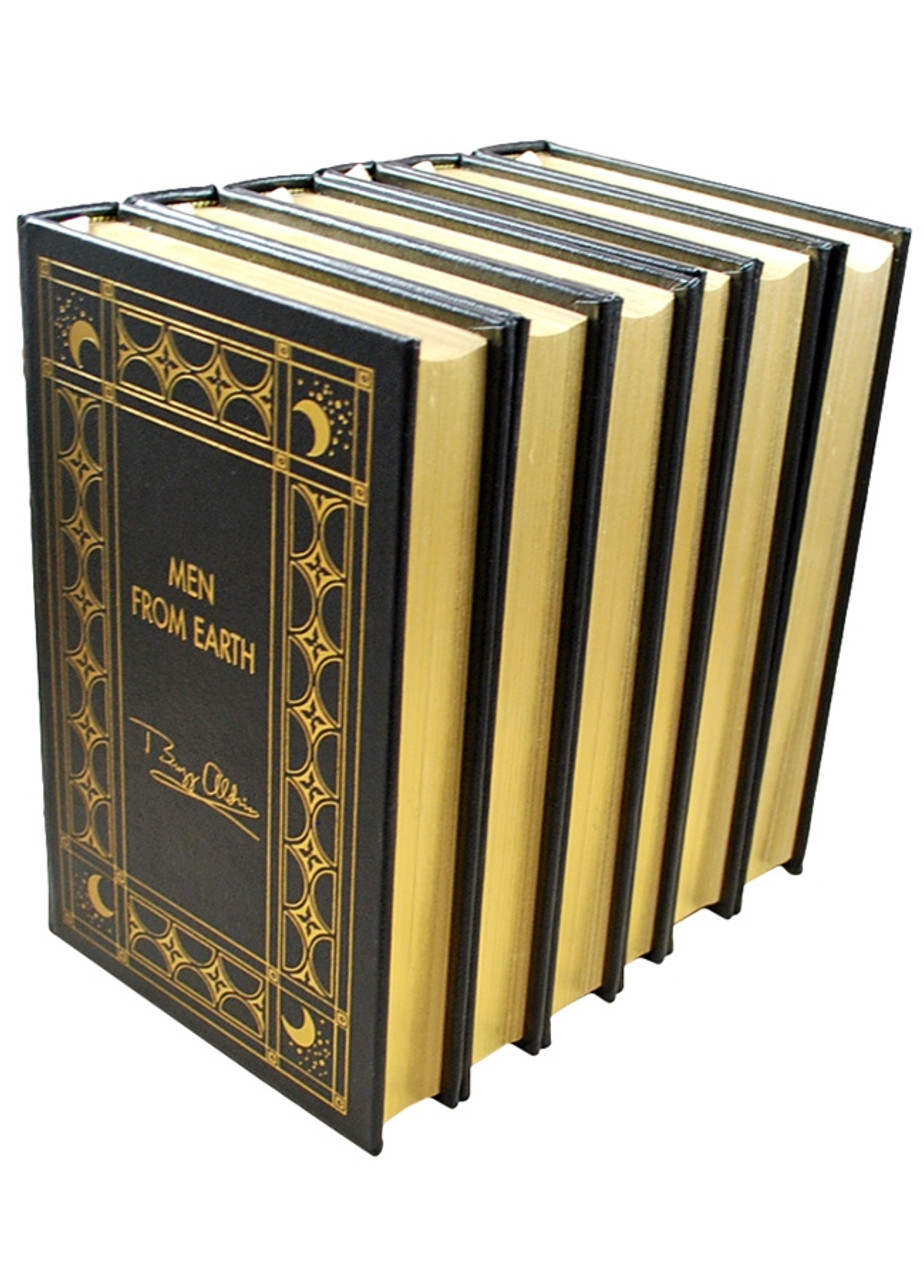 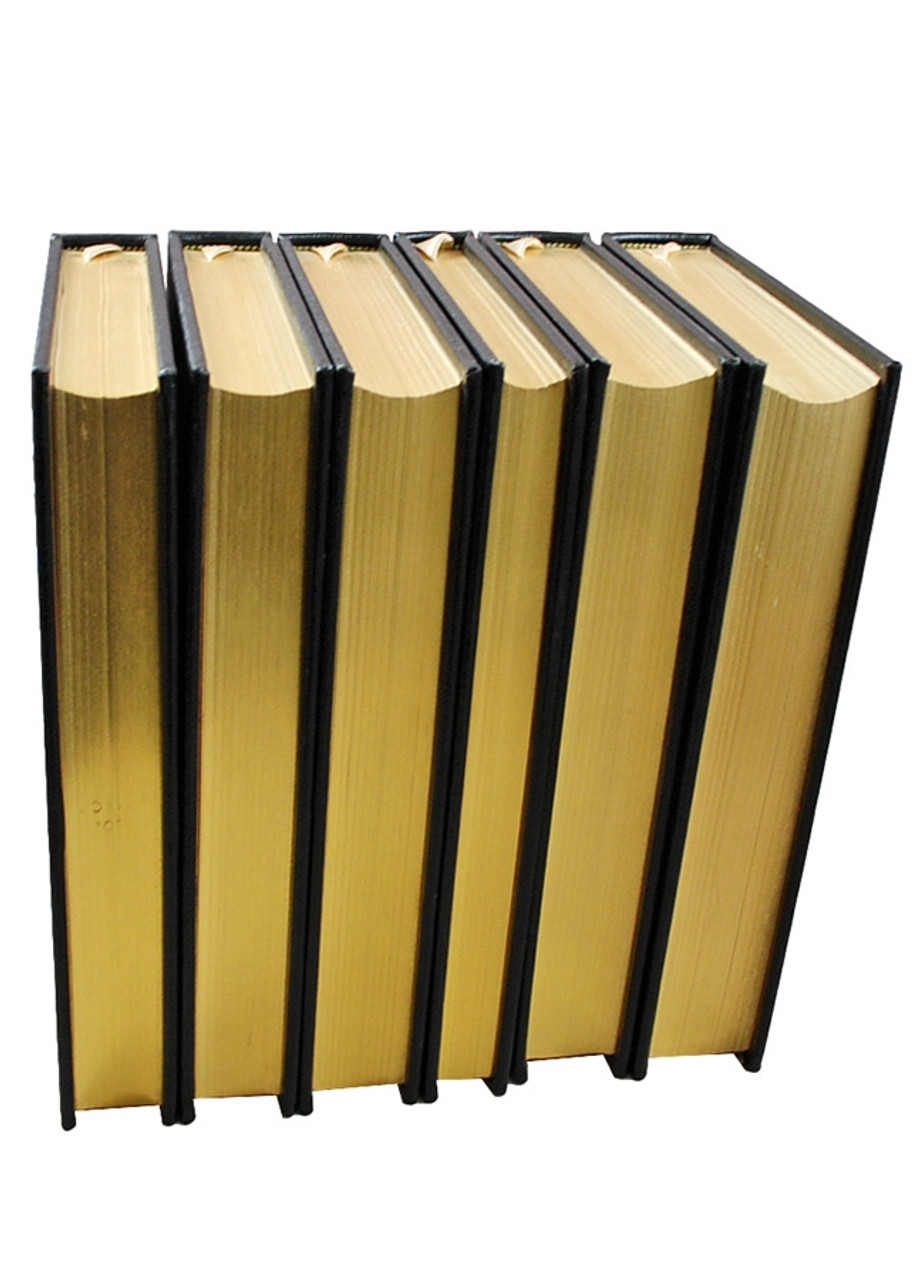 The Perfect Collection For The Space Historian

“The first seven American astronauts were an admirable group of individuals chosen to sit at the apex of a pyramid of human effort… In volunteering to entrust their lives to Mercury’s spirit and Atlas; strength to blaze a trail for man into the empyrean, they chose to lead by following the opportunity that chance, circumstance, technology and history had prepared for them”
(Swenson, Grimwood & Alexander, 164-65).


Easton Press Norwalk CT. 1997. "The Astronaut Library" Signed Limited Edition, complete in seven matching leather bound volumes. Full genuine black leather. From the library of the astronauts, this collection is now rare and out of print. A complete and matching numbers set, all six volumes with Number 1,825 of only 3,000. The seventh matching volume, "The Last Man On The Moon", is a signed limited edition and has not been numbered. Each volume contains a color frontispiece along with black-and-white photographs.

Fine leather binding throughout with 22kt gold accents on the spine. A total of nine signatures along with nine COAs. You will receive the original certificates of authenticity that were included with this collection, signed and dated by each astronaut along with a witness.

These signed heirloom editions are luxuriously bound and can be treasured by your family for generations. This is the ultimate set for a spaceflight history library, and for the space collector.


Each one of these exquisite editions includes the following classic Easton Press qualities:


COUNTDOWN (From Publishers Weekly)
The exciting account included here of Borman's NASA years (he took part in the Gemini 7 and Apollo 8 spaceflights, and also served as a troubleshooter and project manager) augments Tom Wolfe's The Right Stuff with details, dialogue and perceptions that will interest admirers of that bestseller. In 1970, Borman went to work for Eastern Airlines, a company "riddled with inept management and uncaring unions," to eventually take over as president and CEO. His most difficult task: cutting labor costs. The book describes Eastern's prolonged, bitter struggle to remain independent, a management/labor fight Borman lost in 1986 when Eastern became part of Texas Air. The most impressive section of this highly readable autobiography, coauthored with novelist Sterling ( The President's Plane Is Missing ), is the depiction of Borman's confrontations with intransigent labor leaders and the dynamics of their negotiations. Also memorable is the tribute to Susan Borman's poignant struggle to be "the Perfect Wife married to the Perfect Husband who was the Perfect Astronaut in a Perfect American Family raising Perfect Children." Borman is now an aviation consultant.


From Library Journal
To coincide with the 20th anniversary this July of the first manned lunar landing, these books provide intimate accounts of how NASA accomplished the national goal of putting a man on the moon before the end of the decade. In his book, Aldrin, the second man on the moon, interweaves the story of U.S. and Soviet efforts to reach the moon with his first-hand experience flying both the Gemini and Apollo missions during the height of the space race. His recounting of his two space flights is compelling, especially the account of the nearly aborted Apollo 11 lunar landing. In contrast to Aldrin's astronaut's point of view, Murray and Cox's book tells the Apollo story through the eyes of the NASA managers who guided the men and machines from the early days of the Space Task Group to the Apollo lunar missions. The result is the best account to date of how the enormous program was successfully accomplished. Full of insiders' anecdotes, this book truly humanizes the lunar landing story that too often has been told only in technological and bureaucratic terms. Relying heavily on interviews with the people behind the scenes, the authors vividly capture the spirit of Apollo, its triumphs and tragedies, and its ultimate success. When considering the likely demand for Apollo histories surrounding the anniversary, Aldrin's account may be considered complementary to his Apollo 11 crew mate Michael Collins's recent space history, Liftoff ( LJ 8/88)

Irreverent, provocative, and filled with fascinating anecdotes, this autobiography by one of America's first astronauts offers a revealing inside look at the early days of space flight and the men who captured the heart of the nation. Wally Schirra was the only one of the original seven NASA astronauts to command a spacecraft in all three pioneering space program-Mercury, Gemini, and Apollo. Born to a World War I-ace father and a barnstorming, wing-walking mother, he inherited a love of flying and spirit of adventure that served him well. In this chronicle of an important era in aviation history, Schirra takes us into space on his 1962 Mercury flight that orbited Earth six times and aboard Gemini for the first rendezvous of two manned craft in space. Never reluctant to discuss the problems along with the stunning successes of those exciting, formative years, Schirra openly describes the pressures, tensions, and dangers associated with launch.

Review
Published as Project Mercury was thrilling the Free World at the height of the cold war, WE SEVEN was written by the original seven astronauts (and edited by LIFE magazine's John Dille). For researchers and space enthusiasts, the chapters offer valuable contemporaneous, first-person accounts of Project Mercury--from the men, to the machines, to the systems.

Particularly valuable are the accounts of the historic 1959 selection process (and selection medicine) at Lovelace Clinic and Wright-Patterson A.F.B. There are painstakingly technical accounts of the engineering and design work on the hardware in addition to first-person accounts of spaceflight itself, from the days when astronauts flew alone and then only briefly--for a lifetime of fame.

First military tests pilots and then engineers, the Mercury astronauts were not professional writers. The editor does a brilliant job of preserving the distinctive voices of the individual astronauts, while showcasing the highly technical subjects the men describe in WE SEVEN, a bestseller when it was first published in 1962.

A must for any spaceflight history library.

From Library Journal
Shepard and the late Slayton, two of the original Mercury astronauts, here team up with two veteran space reporters to produce a firsthand account of the space program's early days. The narrative is at its best when it focuses on the astronauts' flight experiences-Shepard's brief Mercury flight, his lunar landing mission ten years later, and Slayton's long-delayed trip into space aboard the last Apollo mission in 1975. On the down side, its use of re-created conversations that pass as exposition weaken the narrative, making it sound more like a screenplay prospectus than a space history. For example, it is doubtful that John Glenn had to explain to his fellow astronauts what the Saturn launch vehicle was. One comes away wishing for more insight into what it was like to walk on the moon and less about the astronauts' pranks and peccadillos. Still, with the book's publication timed to coincide with this July's 25th anniversary of the first manned lunar landing, this title may see some demand.

Astronaut Lovell and Kluger, a contributing editor at Discover magazine, take us on the terrifying voyage of unlucky Apollo 13. Launched in April 1970 and manned by Lovell, Jack Swigert and Jack Haise, Apollo 13 was scheduled to orbit the moon while Lovell and Haise descended to its surface. En route, though, a cryogenic tank exploded, causing a loss of oxygen and power in the command module. Luckily, the LEM, the lunar module that was to land on the moon, was uninjured and the astronauts could survive briefly on its oxygen. What unfolds is a story of courage as the astronauts and the personnel at Mission Control in Houston labored to return the spacecraft to Earth. First, there was the crucial alignment to ascertain the position of the spacecraft. Then came the all-important "burn" to swing the spacecraft around the moon on a "free return" trajectory back to earth. And finally there was the important PC+2 burn to guide the ship to the South Pacific, making sure it would enter Earth's atmosphere precisely-if done wrong the craft would either incinerate or skip into orbit around the sun. Everything went perfectly and Apollo 13 splashed down in the Pacific. This is a gripping and frightening book that commands rapt attention. Photos not seen by PW. Author tour.

The ultimate autographed collection for your spaceflight history library

Lifetime Guarantee of Signature Authenticity. Each volume has been personally hand signed by the astronaut directly into the book. The autographs are not facsimiles, stamp, or auto-pens. Includes the COA from the publisher.

Each volume varies from Very Fine to Near Fine. Read description for full details. Each volume is in unread condition with square and tight spines. No bookplates attached or indication of any removed.