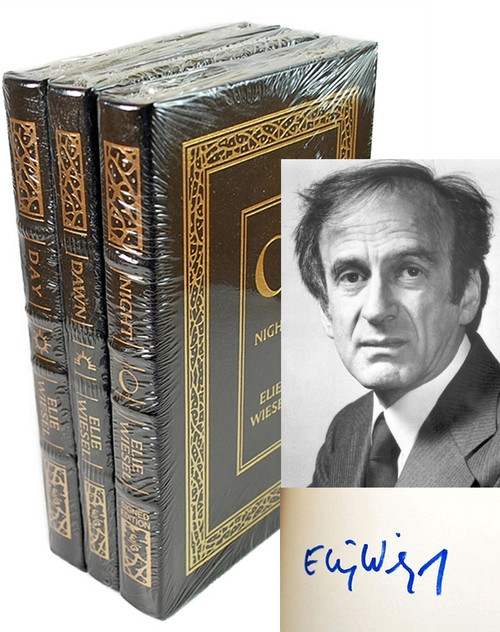 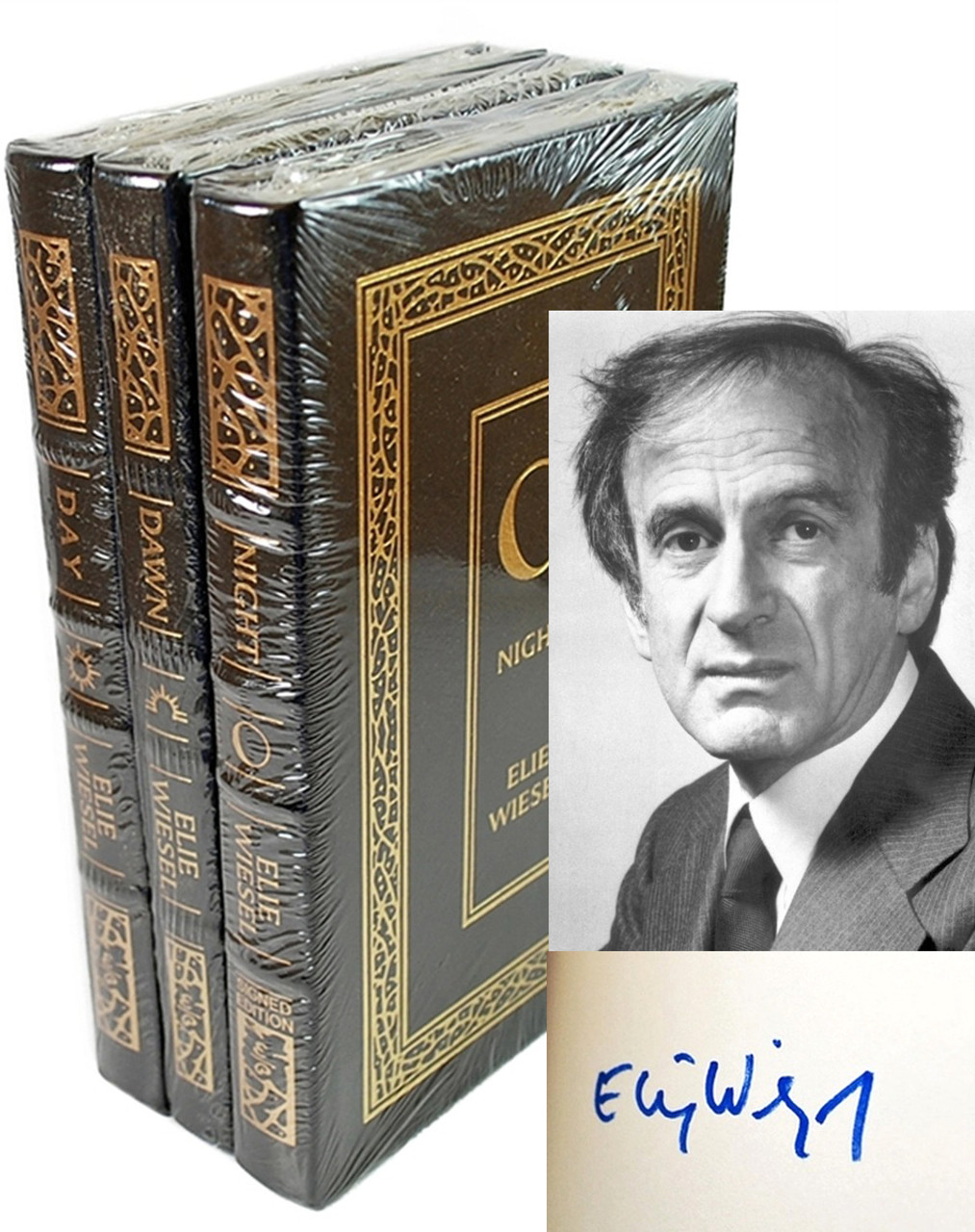 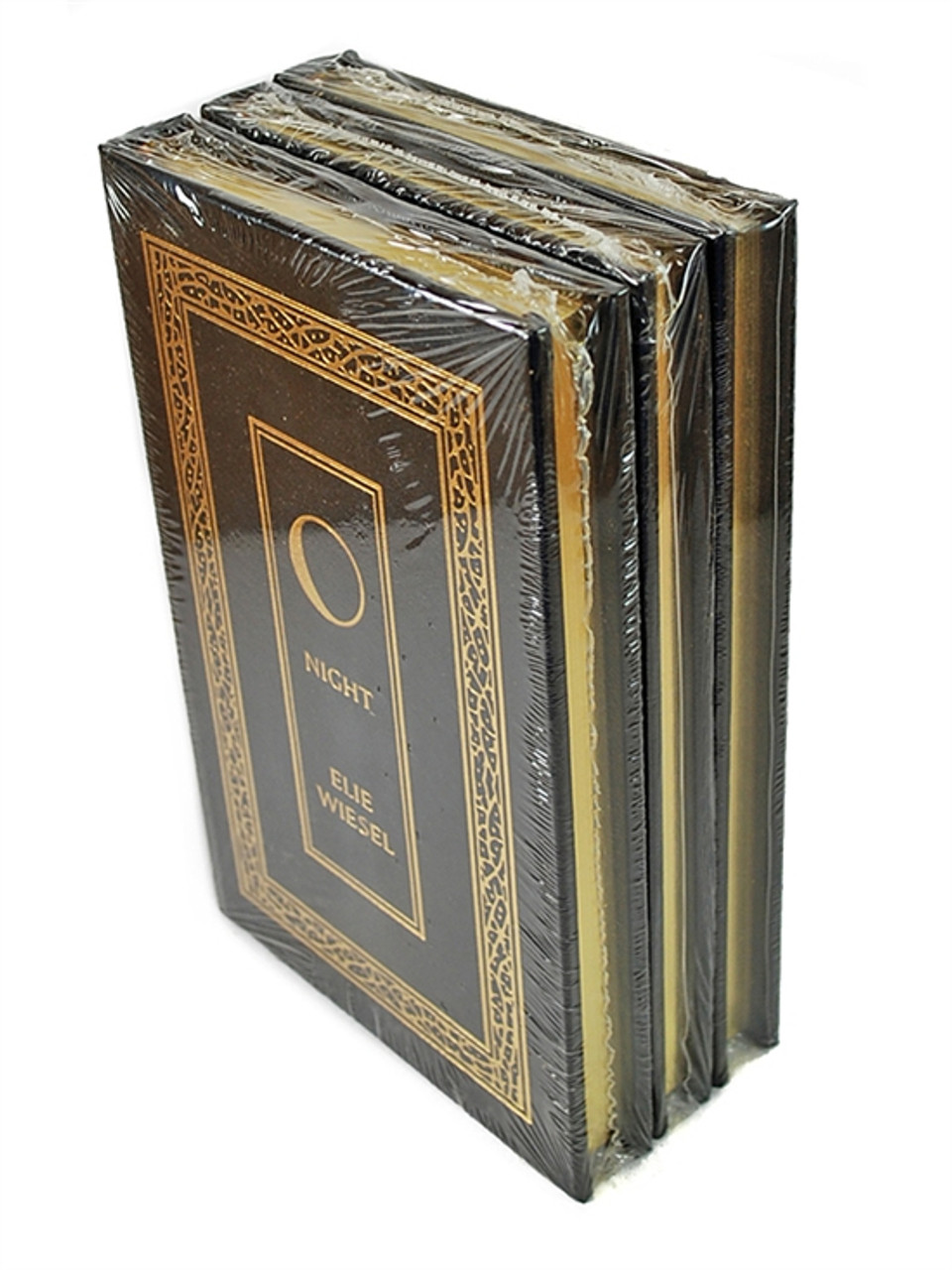 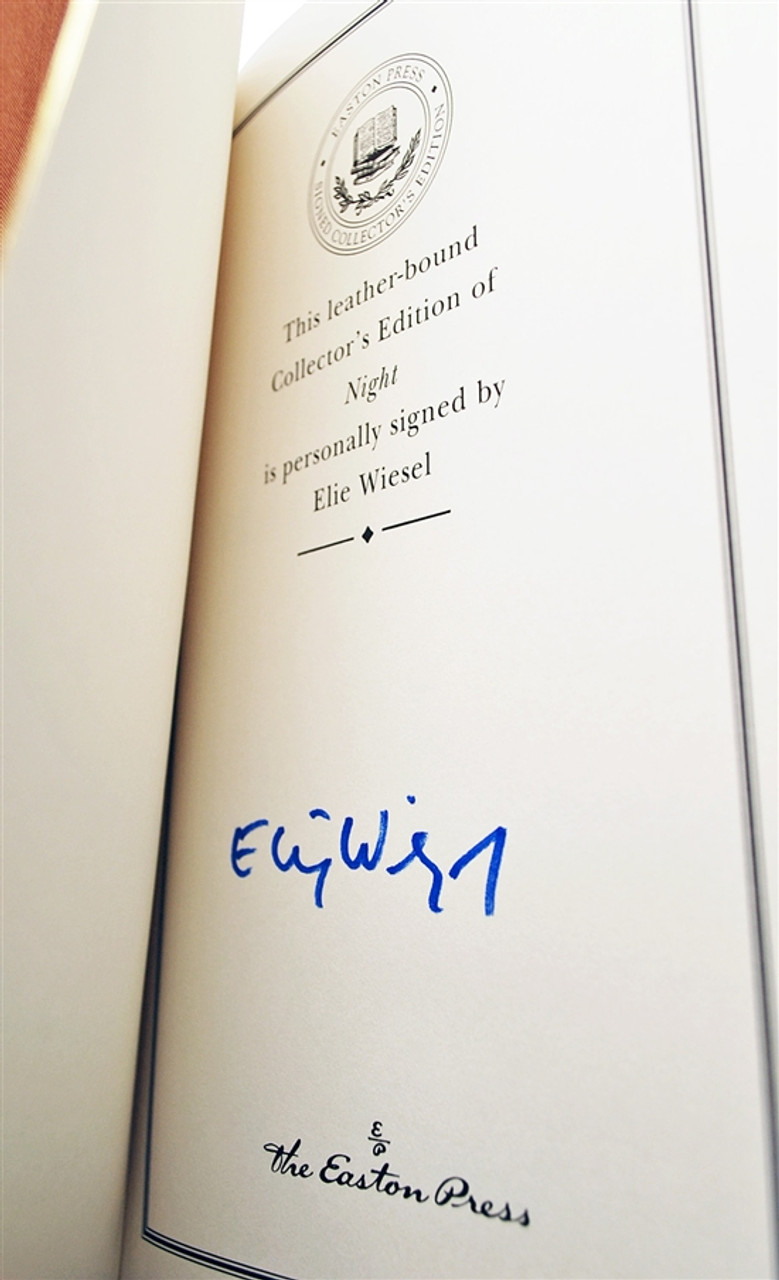 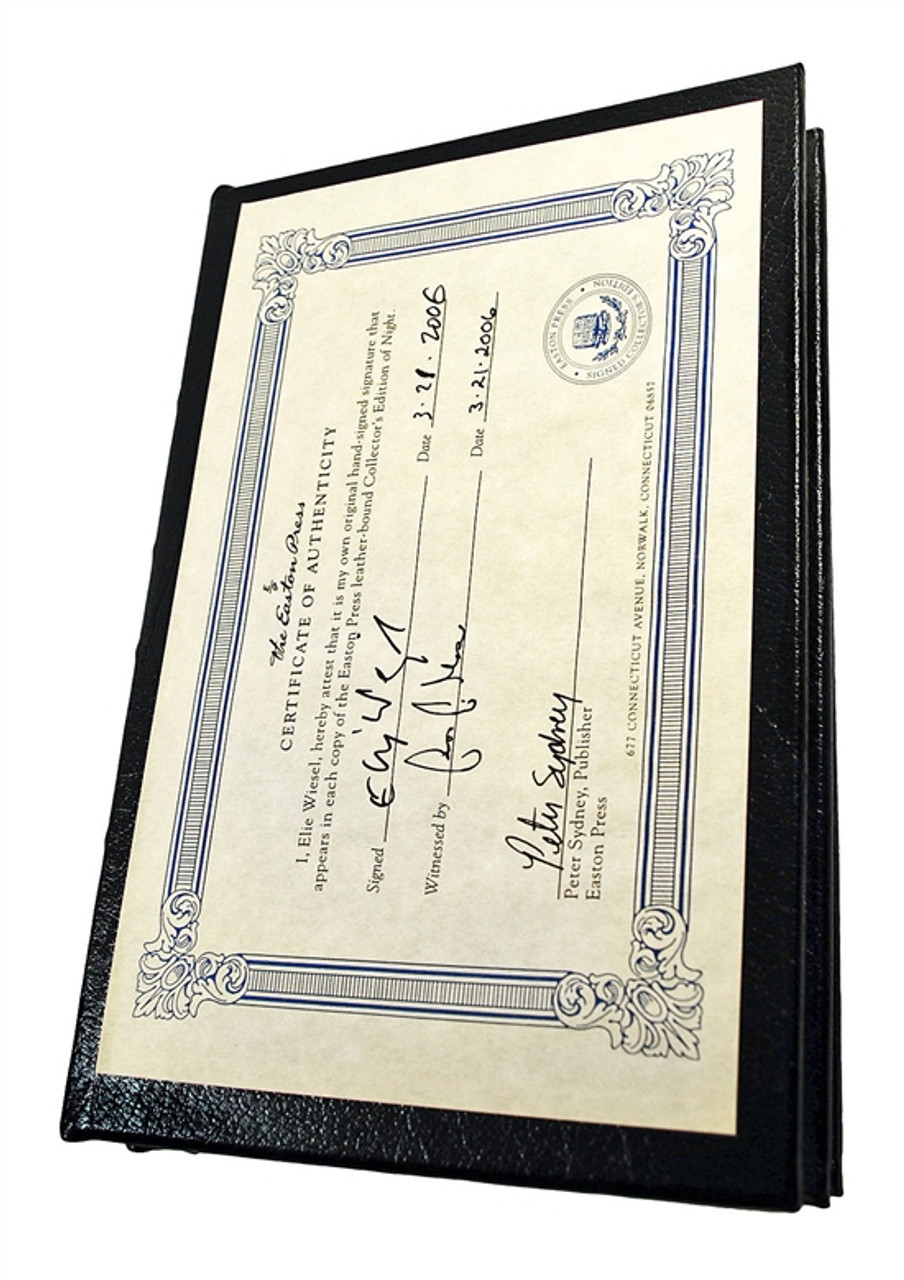 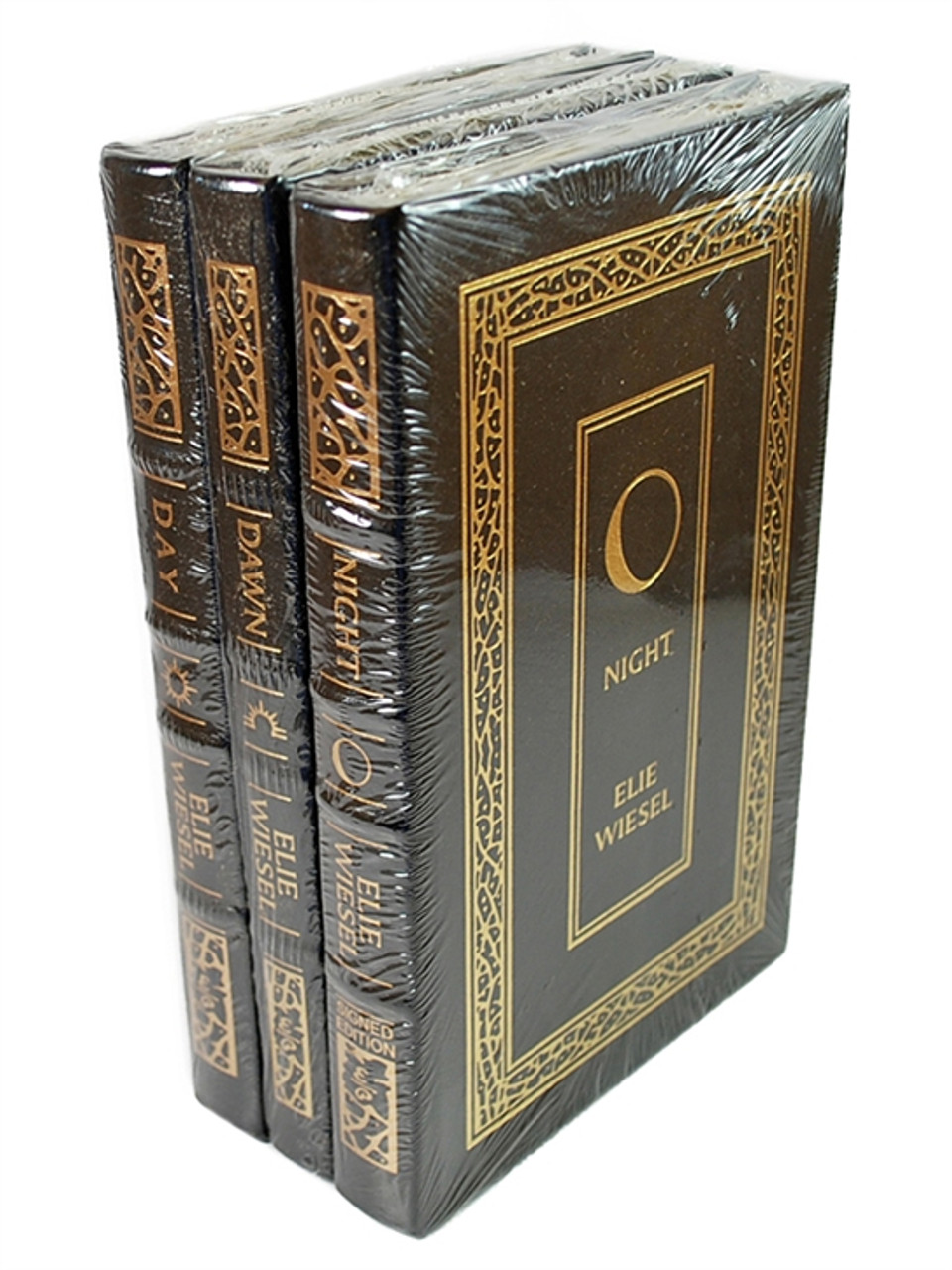 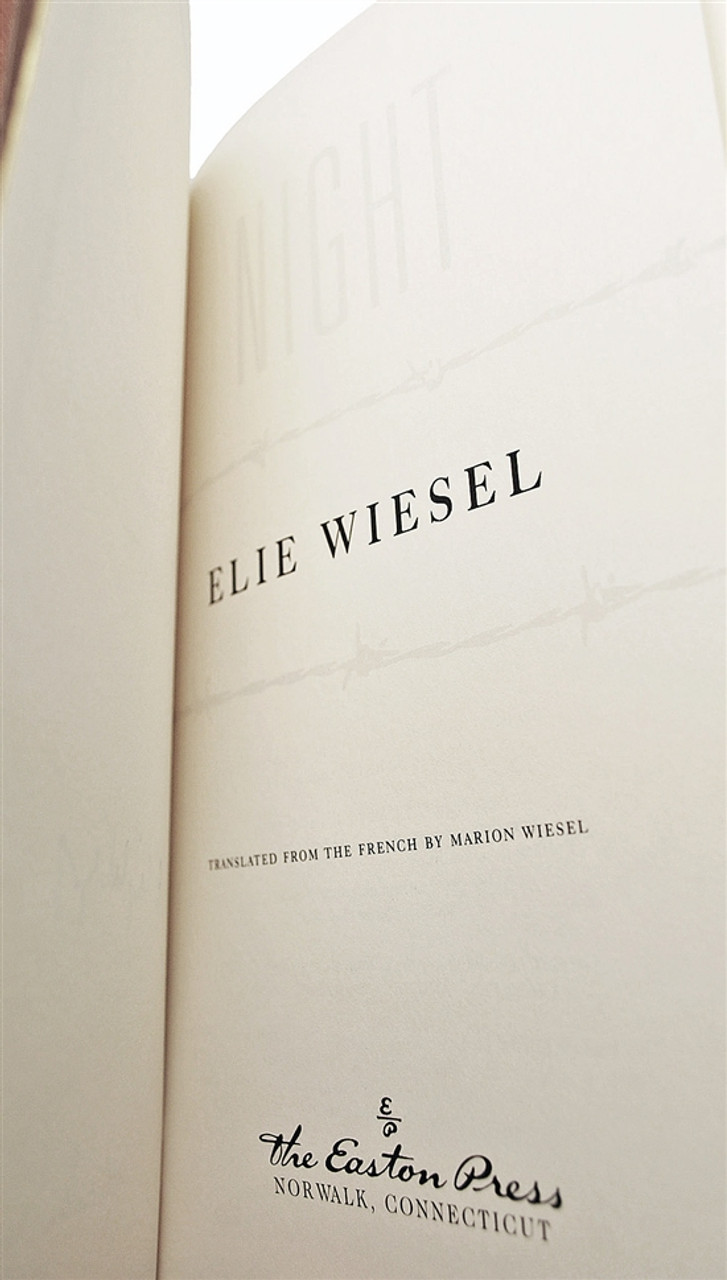 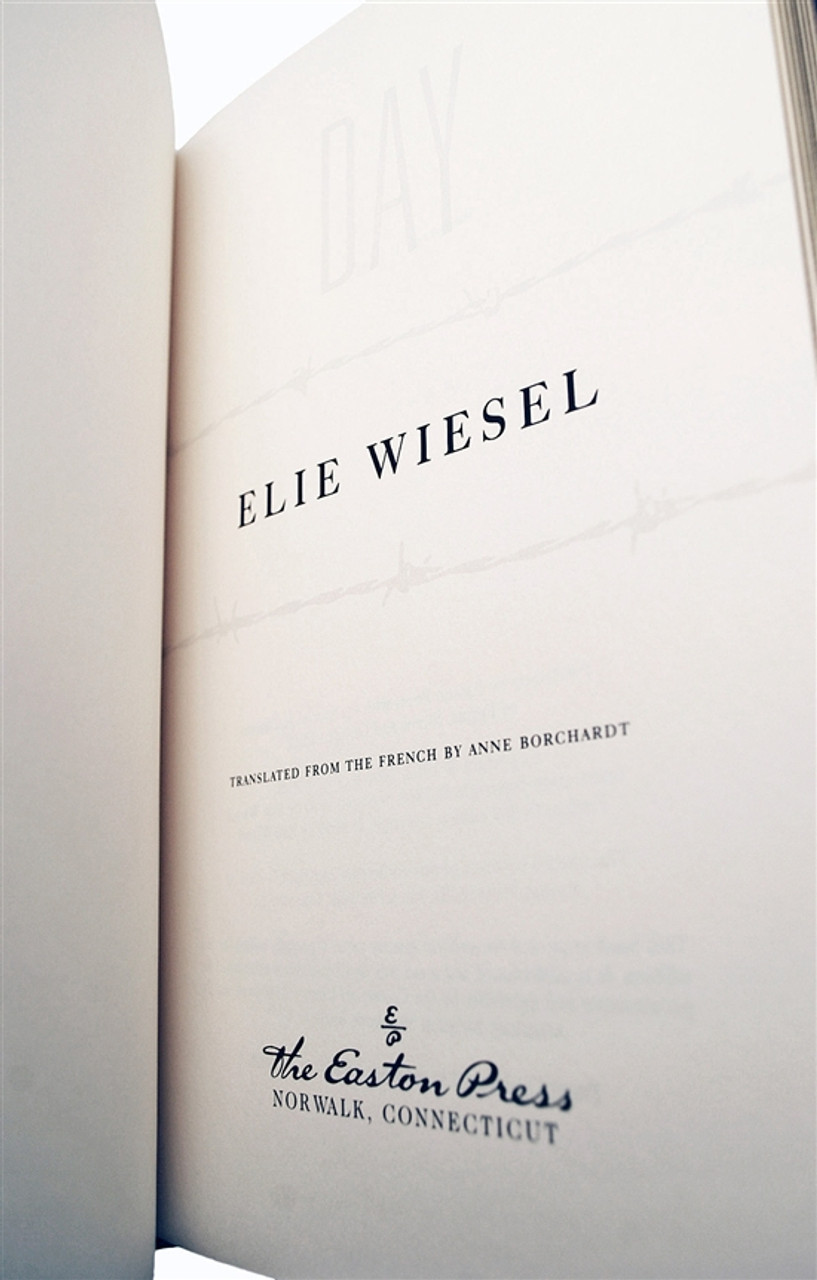 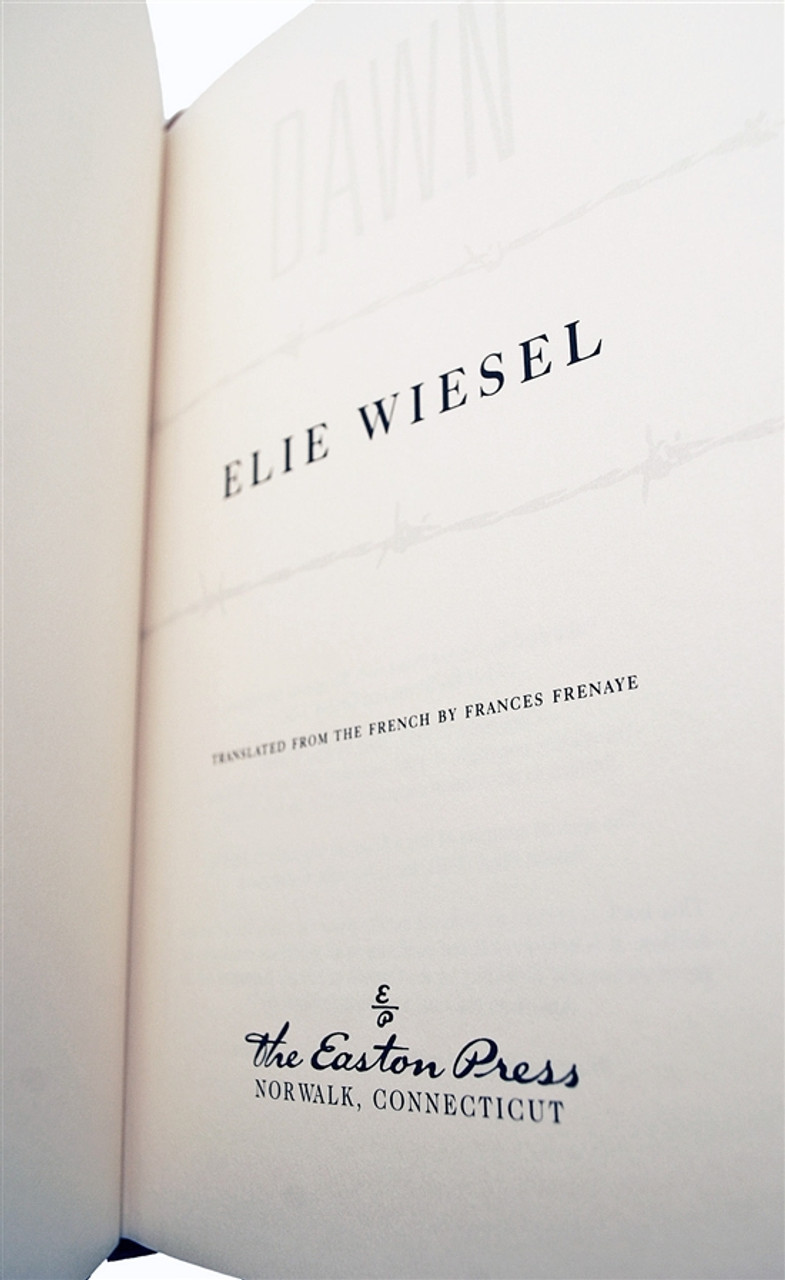 Easton Press. Norwalk, CT. 2006. "The Night Trilogy" Elie Wiesel. A complete matching 3-volume set. "Night" is a Signed Limited Edition with Certificate of Authenticity from Easton Press. Makes a lovely addition to the library of any serious collector. Bound in full genuine leather with exquisite gold detailing. Includes extra unattached Ex-Libris bookplates for your own personalization. A gorgeous collection bound in black leather.

Night is one of the masterpieces of Holocaust literature. First published in 1958, it is the autobiographical account of an adolescent boy and his father in Auschwitz. Elie Wiesel writes of their battle for survival and of his battle with God for a way to understand the wanton cruelty he witnesses each day. In the short novel Dawn (1960), a young man who has survived World War II and settled in Palestine joins a Jewish underground movement and is commanded to execute a British officer who has been taken hostage. In Day (previously titled The Accident, 1961), Wiesel questions the limits of conscience: Can Holocaust survivors forge a new life despite their memories? Wiesels trilogy offers insights on mankinds attraction to violence and on the temptation of self-destruction.

Elisha is a young Jewish man, a Holocaust survivor, and an Israeli freedom fighter in British-controlled Palestine; John Dawson is the captured English officer he will murder at dawn in retribution for the British execution of a fellow freedom fighter. The night-long wait for morning and death provides Dawn, Elie Wiesel's ever more timely novel, with its harrowingly taut, hour-by-hour narrative. Caught between the manifold horrors of the past and the troubling dilemmas of the present, Elisha wrestles with guilt, ghosts, and ultimately God as he waits for the appointed hour and his act of assassination. Dawn is an eloquent meditation on the compromises, justifications, and sacrifices that human beings make when they murder other human beings.

"Not since Albert Camus has there been such an eloquent spokesman for man." --The New York Times Book Review

The publication of Day restores Elie Wiesel's original title to the novel initially published in English as The Accident and clearly establishes it as the powerful conclusion to the author's classic trilogy of Holocaust literature, which includes his memoir Night and novel Dawn. "In Night it is the ‘I' who speaks," writes Wiesel. "In the other two, it is the ‘I' who listens and questions."

In its opening paragraphs, a successful journalist and Holocaust survivor steps off a New York City curb and into the path of an oncoming taxi. Consequently, most of Wiesel's masterful portrayal of one man's exploration of the historical tragedy that befell him, his family, and his people transpires in the thoughts, daydreams, and memories of the novel's narrator. Torn between choosing life or death, Day again and again returns to the guiding questions that inform Wiesel's trilogy: the meaning and worth of surviving the annihilation of a race, the effects of the Holocaust upon the modern character of the Jewish people, and the loss of one's religious faith in the face of mass murder and human extermination.

Elie Wiesel is the author of more than forty books, including his unforgettable international best sellers Night and A Beggar in Jerusalem, winner of the Prix Médicis. He has been awarded the Presidential Medal of Freedom, the United States Congressional Gold Medal, and the French Legion of Honor with the rank of Grand Cross. In 1986, he received the Nobel Peace Prize. He is Andrew W. Mellon Professor in the Humanities and University Professor at Boston University.

Eliezer "Elie" Wiesel is a Transylvanian-born Jewish-American writer, professor, political activist, Nobel Laureate, and Holocaust survivor. He is the author of 57 books, including Night, a work based on his experiences as a prisoner in the Auschwitz, Buna, and Buchenwald concentration camps. Wiesel is also the Advisory Board chairman of the newspaper Algemeiner Journal.

When Wiesel was awarded the Nobel Peace Prize in 1986, the Norwegian Nobel Committee called him a "messenger to mankind," stating that through his struggle to come to terms with "his own personal experience of total humiliation and of the utter contempt for humanity shown in Hitler's death camps", as well as his "practical work in the cause of peace", Wiesel had delivered a powerful message "of peace, atonement and human dignity" to humanity. 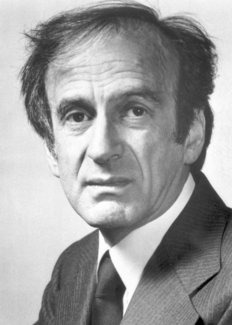 Elie Wiesel was born in 1928 in the town of Sighet, now part of Romania. During World War II, he, with his family and other Jews from the area, were deported to the German concentration and extermination camps, where his parents and little sister perished. Wiesel and his two older sisters survived. Liberated from Buchenwald in 1945 by advancing Allied troops, he was taken to Paris where he studied at the Sorbonne and worked as a journalist.

In 1958, he published his first book, La Nuit, a memoir of his experiences in the concentration camps. He has since authored nearly thirty1 books some of which use these events as their basic material. In his many lectures, Wiesel has concerned himself with the situation of the Jews and other groups who have suffered persecution and death because of their religion, race or national origin. He has been outspoken on the plight of Soviet Jewry, on Ethiopian Jewry and on behalf of the State of Israel today2.

Wiesel has made his home in New York City, and is now a United States citizen. He has been a visiting scholar at Yale University, a Distinguished Professor of Judaic Studies at the City College of New York, and since 1976 has been Andrew W. Mellon Professor in the Humanities at Boston University where he teaches “Literature of Memory.” Chairman of the United States Holocaust Memorial Council from 1980 – 1986, Wiesel serves on numerous boards of trustees and advisors.

Condition: As New (Sealed). Each volume is mint and sealed in the original shrink-wrap. Unread books with no bumped corners. Sharp corners. No marks, writings or stamps. No scratches and/or blemishes to the gilded page edges.