Personally signed by Sir Edmund Hillary directly into the book.

Hillary writes "This is the story of my life, condensing 79 years of vigorous activity into a few hundred pages. My views may not always coincide with the stories of my companions, but this is the way I clearly saw things at the time". Illustrated with maps, 63 color photographs and 23 black & white photographs. Index. 310 pgs.

On May 29th, 1953 Edmund Hillary, a 33-year-old beekeeper from New Zealand, and his Sherpa Tenzing Norgay stepped onto the summit of Mt. Everest and secured a place in the annals of world exploration. Prior to 1953, no one knew if it was even possible to climb this mountain and it had long been the "Holy Grail" of mountain climbers. In 1951, a possible route up the south slope had been discovered. Hillary descended Everest to find that he had become a living legend. He then went on to become the world's greatest living explorer. His monumental achievements also include the first trans-Antarctic expedition to the South Pole. Truly a legend in his own time, Hillary penned High Adventure. It is the definitive and very entertaining memoir of his Himalayan quest. He describes in vivid detail the agonizing and perilous climb. This is a wonderful book to read and is also a very fine collector's book.

"Sir Edmund, he's worshipped, you know, as a god among the Sherpas." --Jamling Tenzing

"He had a tremendous, bursting, elemental, infectious, glorious vitality about him." --Jan Morris

Adventurers the world over have been inspired by the achievements of Sir Edmund Hillary, the first man ever to set foot on the summit of Mount Everest. In this candid, wry, and vastly entertaining autobiography, Hillary looks back on that 1953 landmark expedition, as well as his remarkable explorations in other exotic locales, from the South Pole to the Ganges. View From The Summit is the compelling life story of a New Zealand country boy who daydreamed of wild adventures; the pioneering climber who was knighted by Queen Elizabeth after scaling the world's tallest peak; and the elder statesman and unlikely diplomat whose groundbreaking program of aid to Nepal continues to this day, paying his debt of worldwide fame to the Himalayan region.

More than four decades after Hillary looked down from Everest's 29,000 feet, his impact is still felt -- in our fascination with the perils and triumphs of mountain climbing, and in today's phenomenon of extreme sports. The call to adventure is alive and real on every page of this gripping memoir.--This text refers to an out of print or unavailable edition of this title. 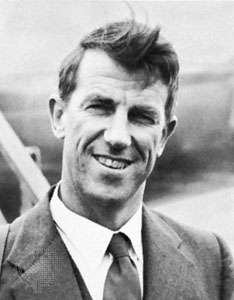 Sir Edmund Percival Hillary KG ONZ KBE (20 July 1919 – 11 January 2008) was a New Zealand mountaineer, explorer, and philanthropist. On 29 May 1953, Hillary and Nepalese Sherpa mountaineer Tenzing Norgay became the first climbers confirmed to have reached the summit of Mount Everest. They were part of the ninth British expedition to Everest, led by John Hunt.

Hillary became interested in mountaineering while in secondary school. He made his first major climb in 1939, reaching the summit of Mount Ollivier. He served in the Royal New Zealand Air Force as a navigator during World War II. Prior to the Everest expedition, Hillary had been part of the British reconnaissance expedition to the mountain in 1951 as well as an unsuccessful attempt to climb Cho Oyu in 1952. As part of the Commonwealth Trans-Antarctic Expedition he reached the South Pole overland in 1958. He subsequently reached the North Pole, making him the first person to reach both poles and summit Everest.

Following his ascent of Everest, Hillary devoted himself to assisting the Sherpa people of Nepal through the Himalayan Trust, which he established. His efforts are credited with the construction of many schools and hospitals in Nepal. From 1985 to 1988 he served as New Zealand's High Commissioner to India and Bangladesh and concurrently as Ambassador to Nepal. Hillary had numerous honours conferred upon him, including the Order of the Garter in 1995. Upon his death in 2008, he was given a state funeral in New Zealand.

VERY FINE GUARANTEED. Sealed. As New. The condition is of the highest quality without any discernible flaws. Unread book with sharp corners, and free of any marks, scratches, or blemishes. Photos are of the actual book.

PERSONALLY HAND-SIGNED DIRECTLY INTO THE BOOK by Sir Edmund Hillary.Guarantee of Signature AuthenticityEaston Press COA (certificate of authenticity) guarantees the signature to be authentic. The...