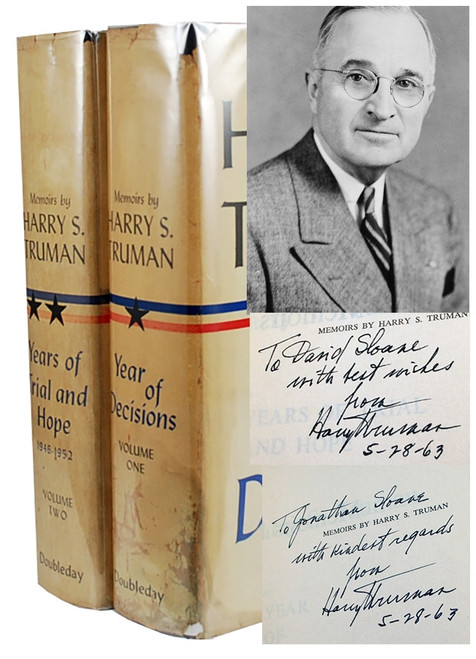 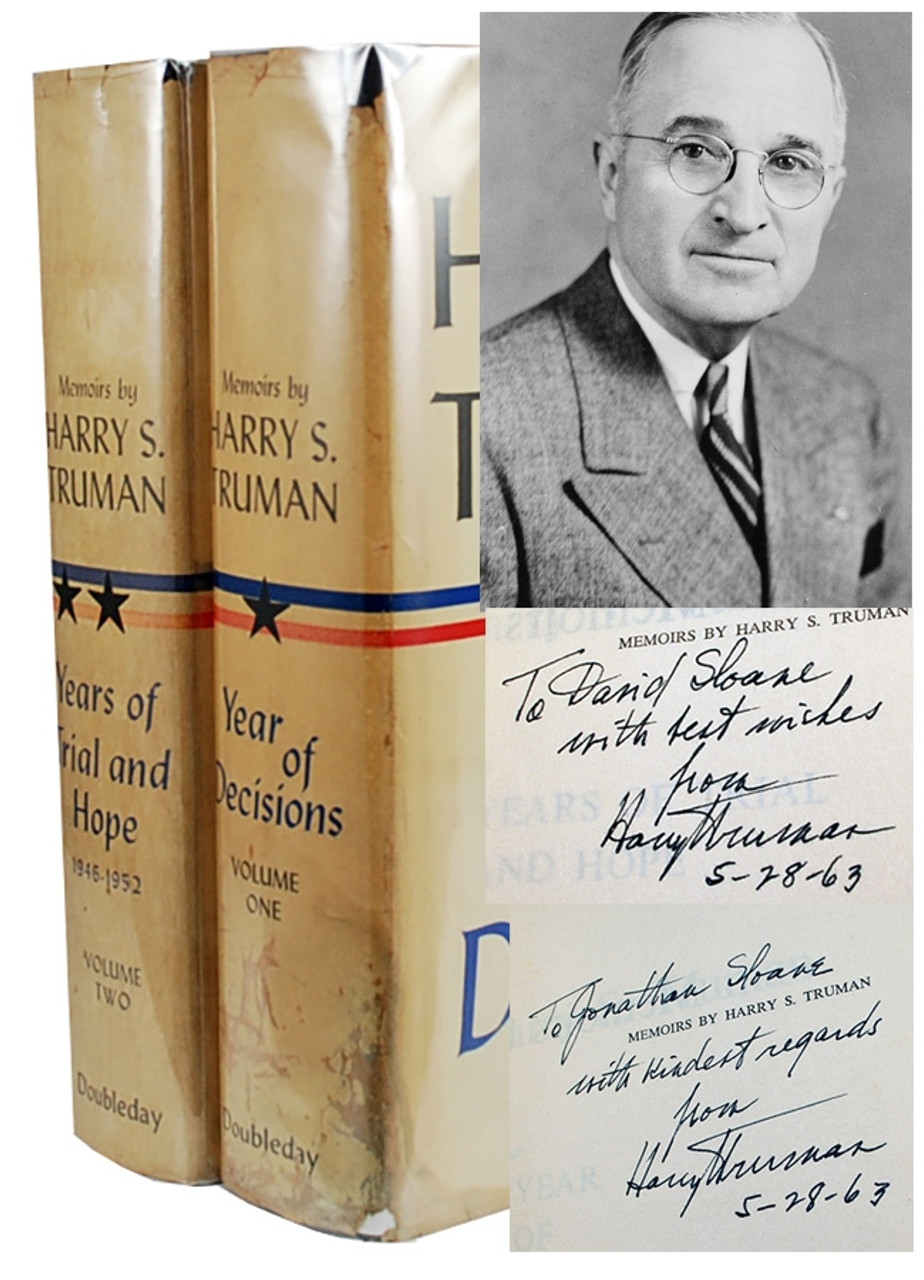 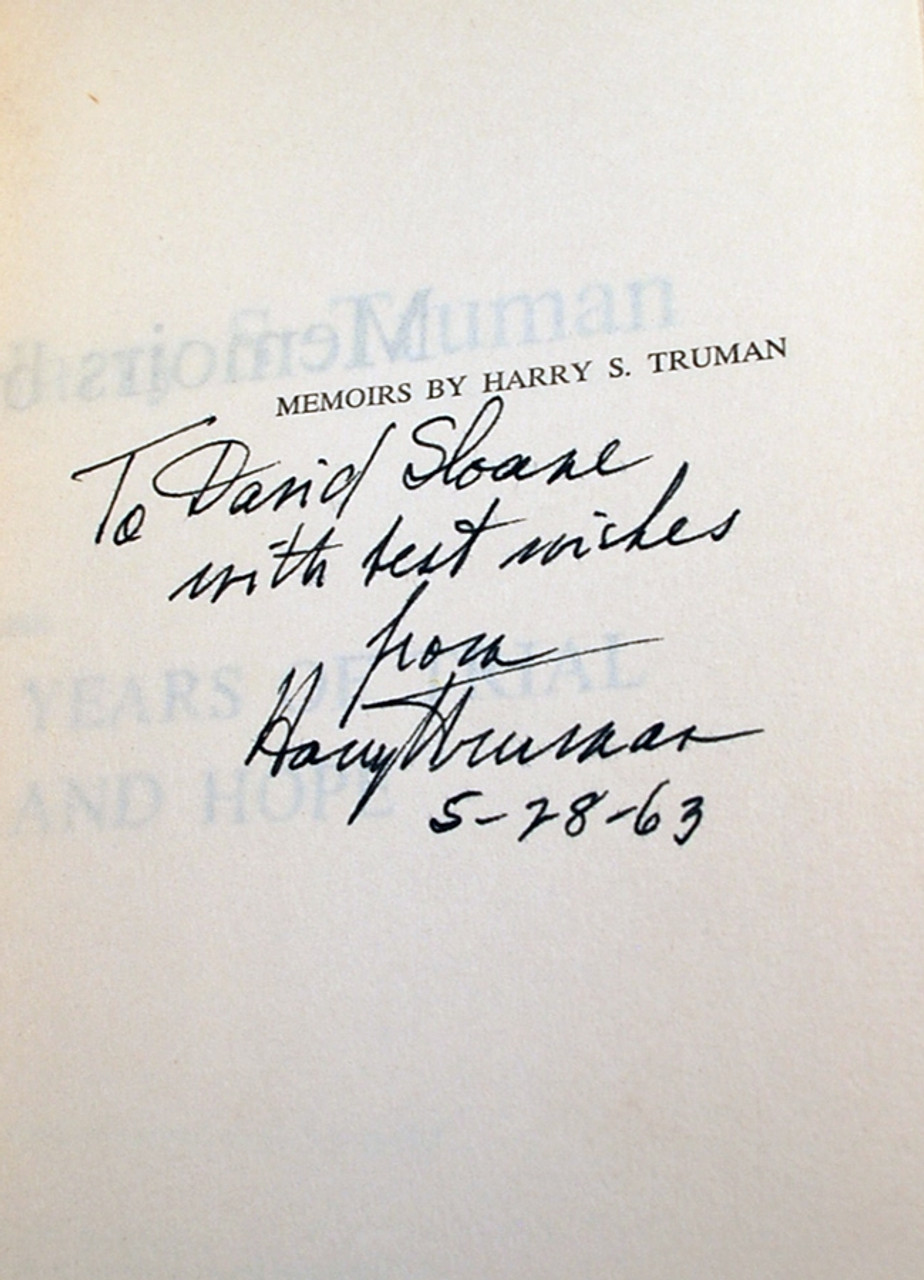 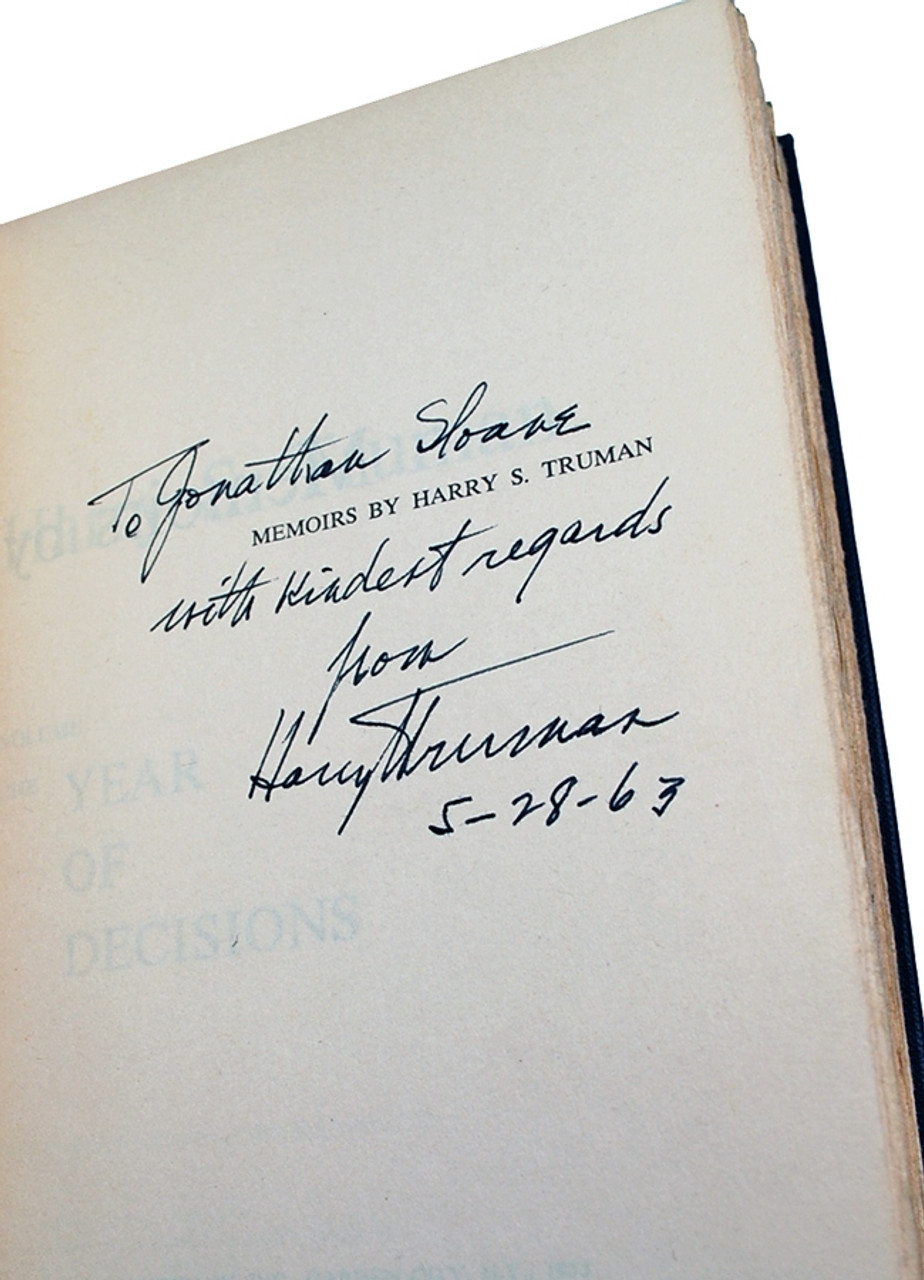 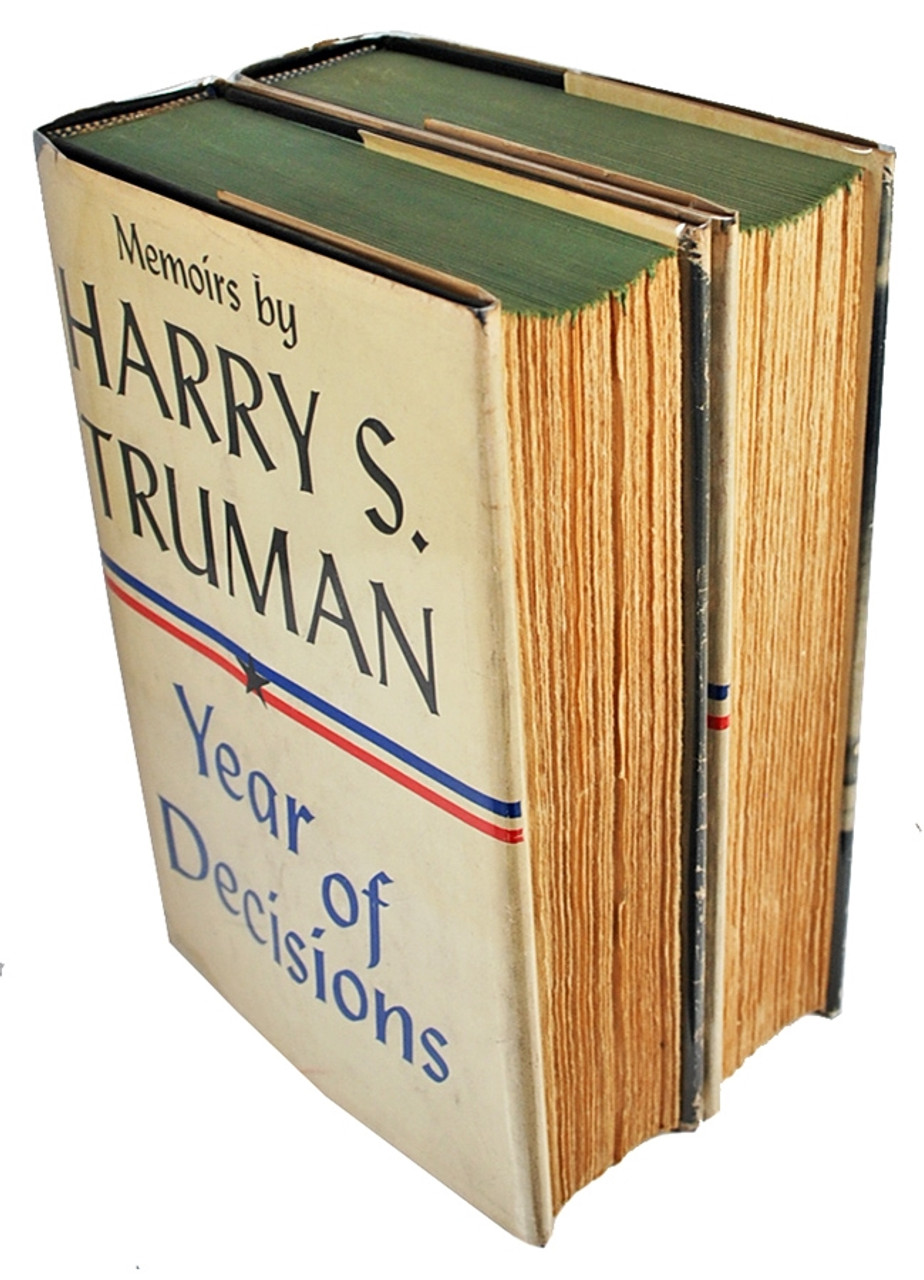 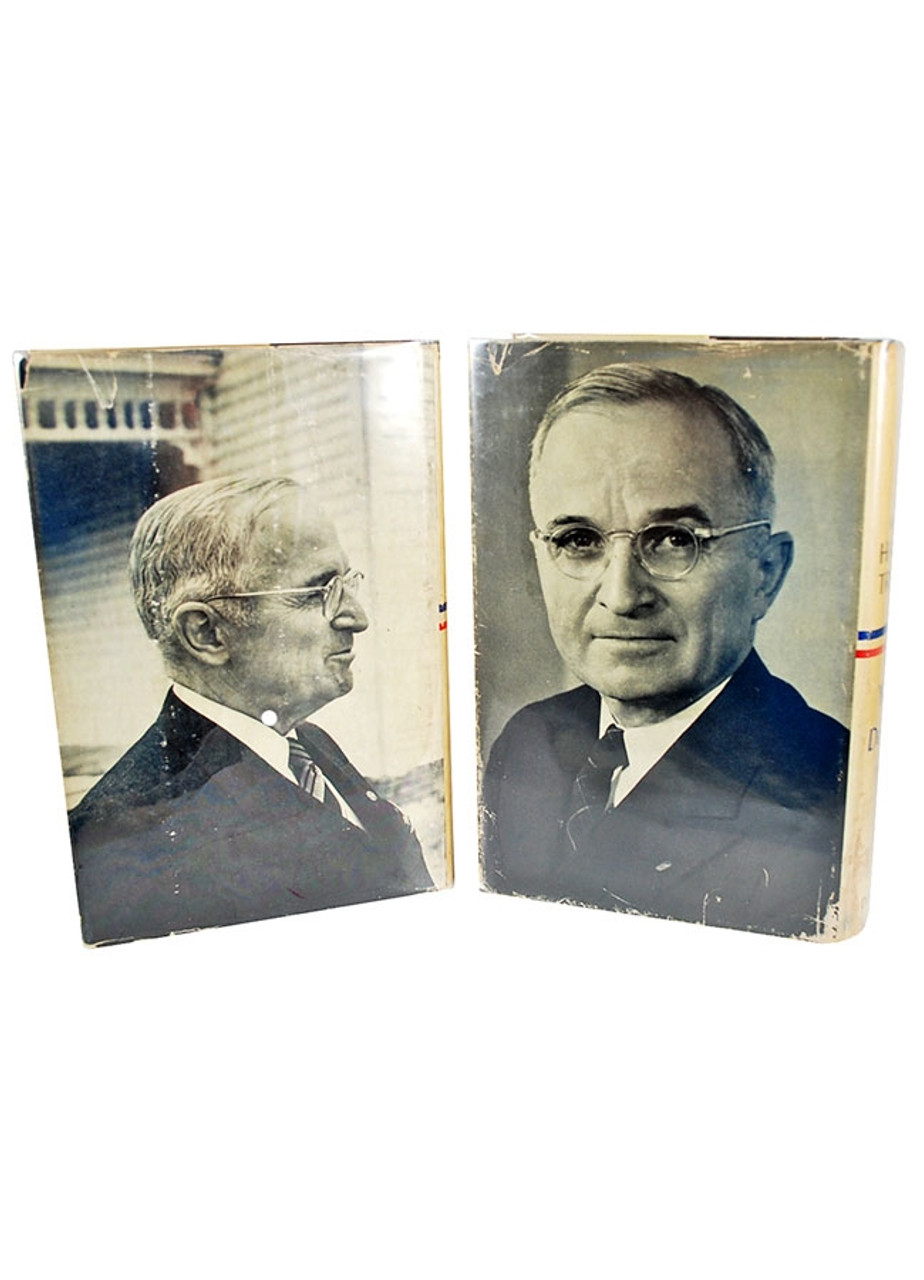 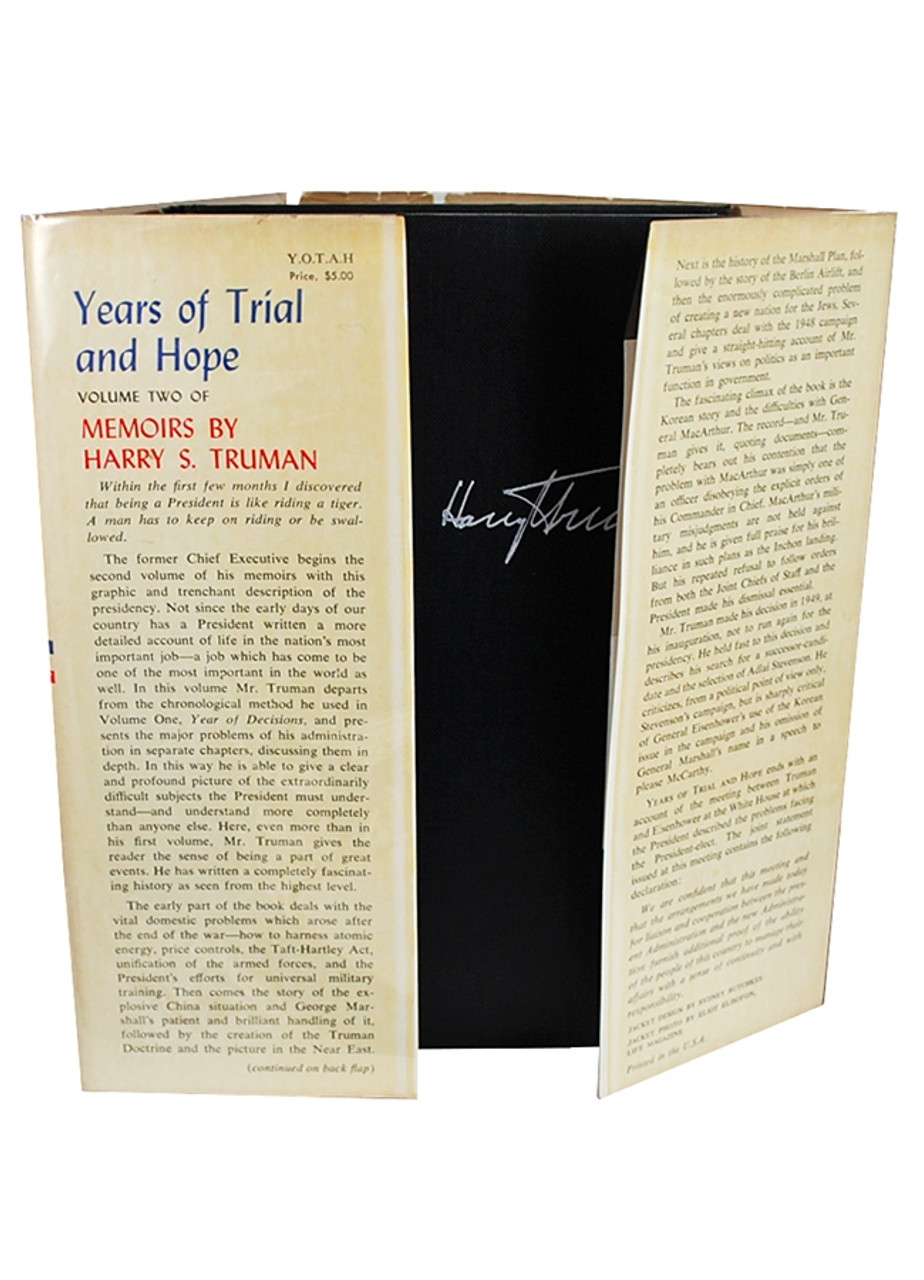 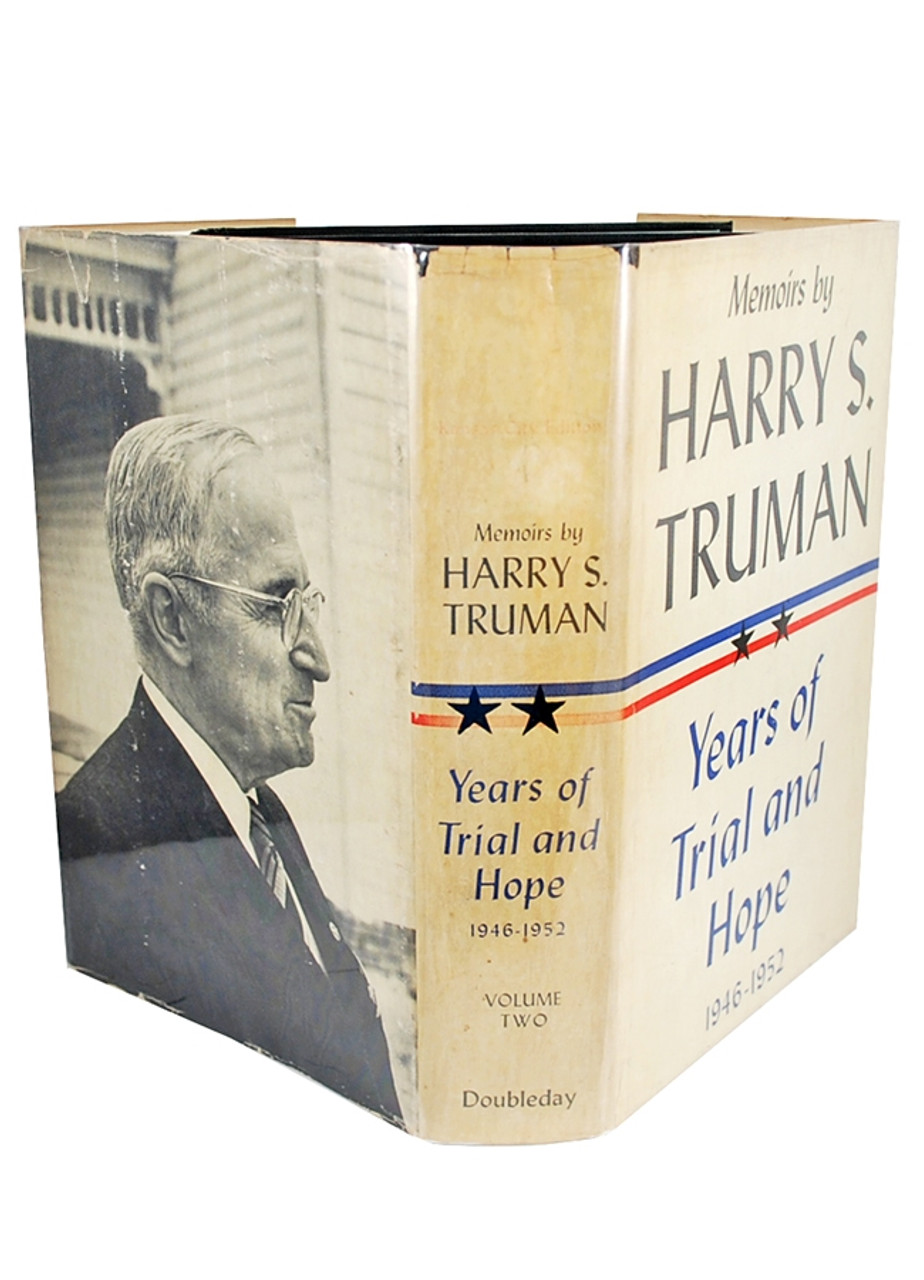 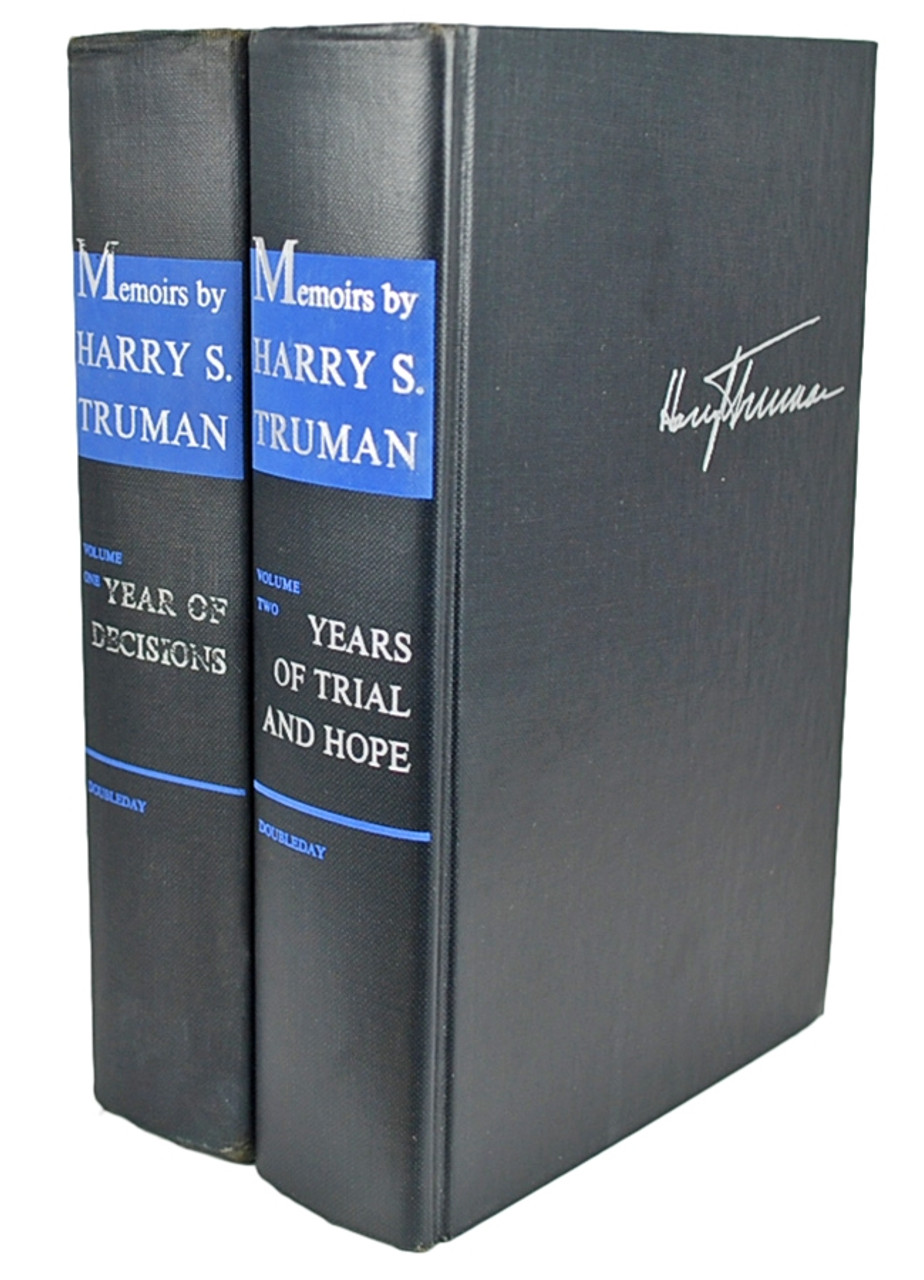 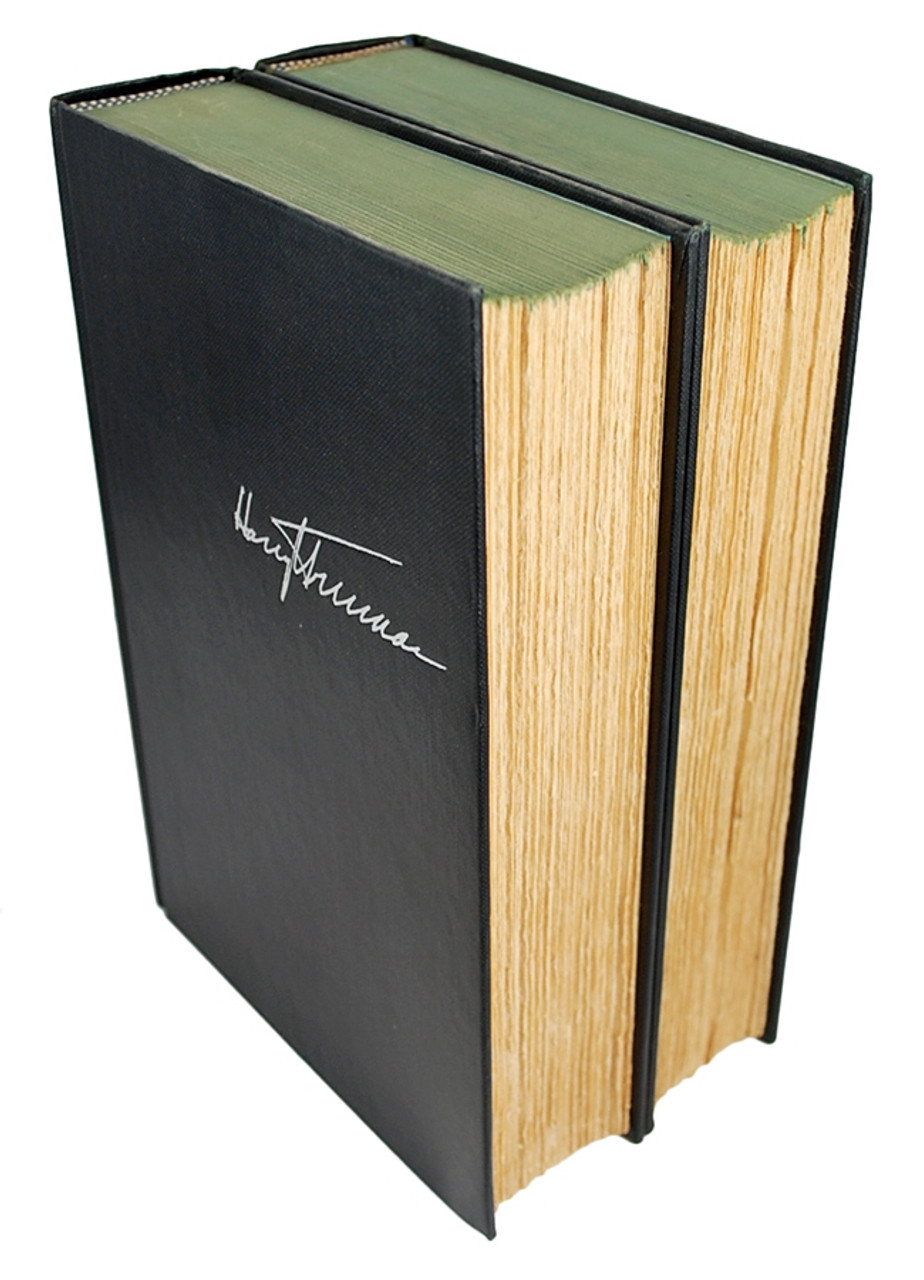 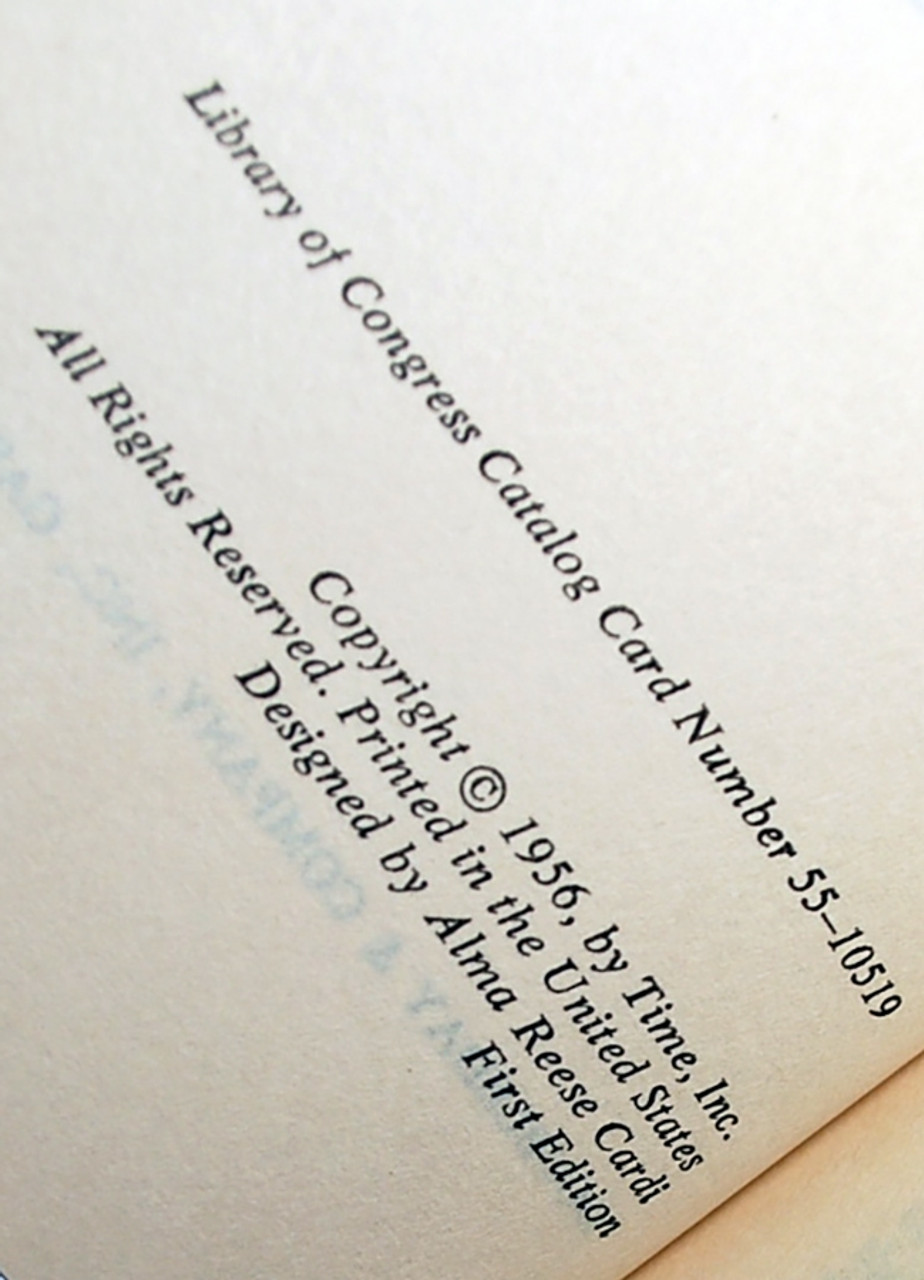 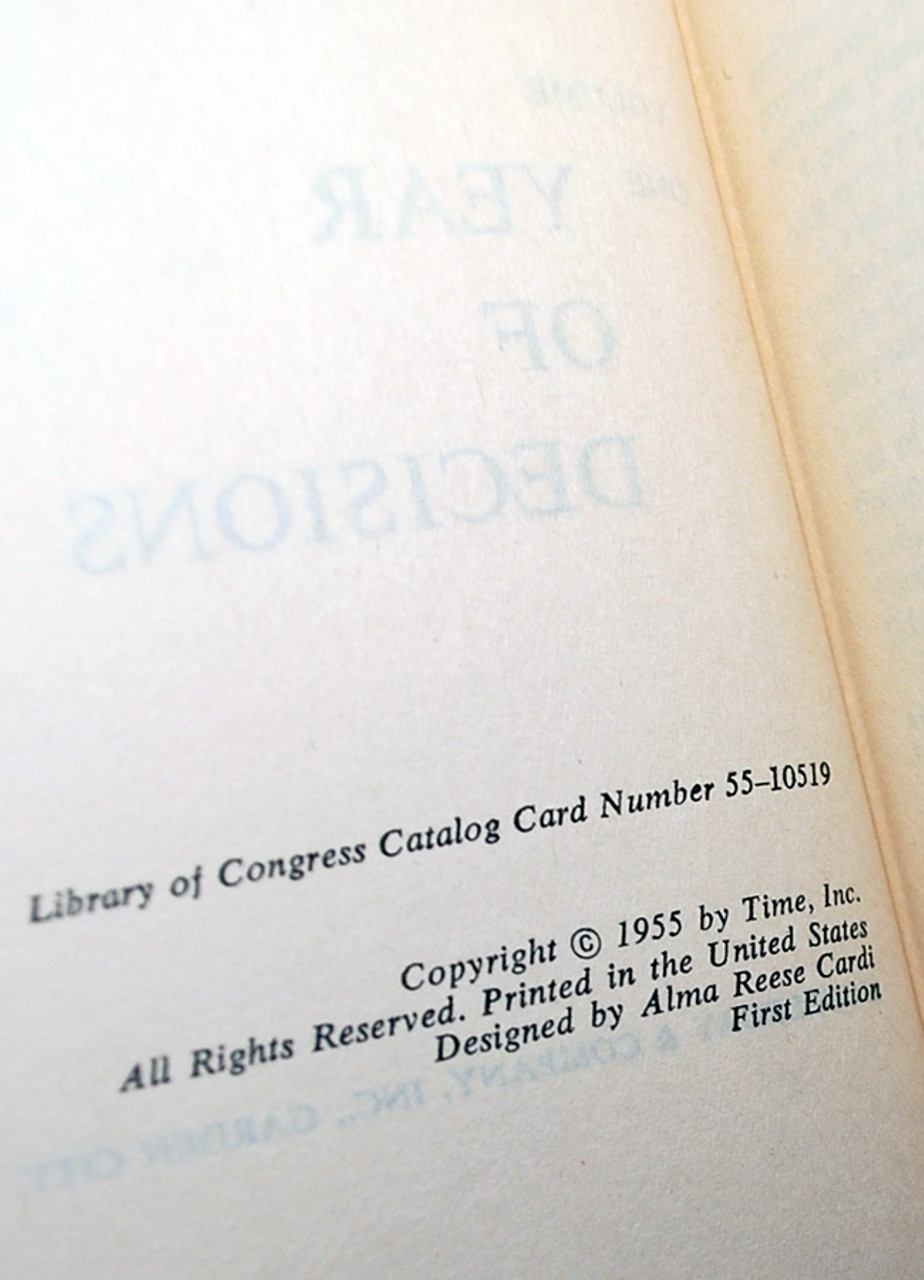 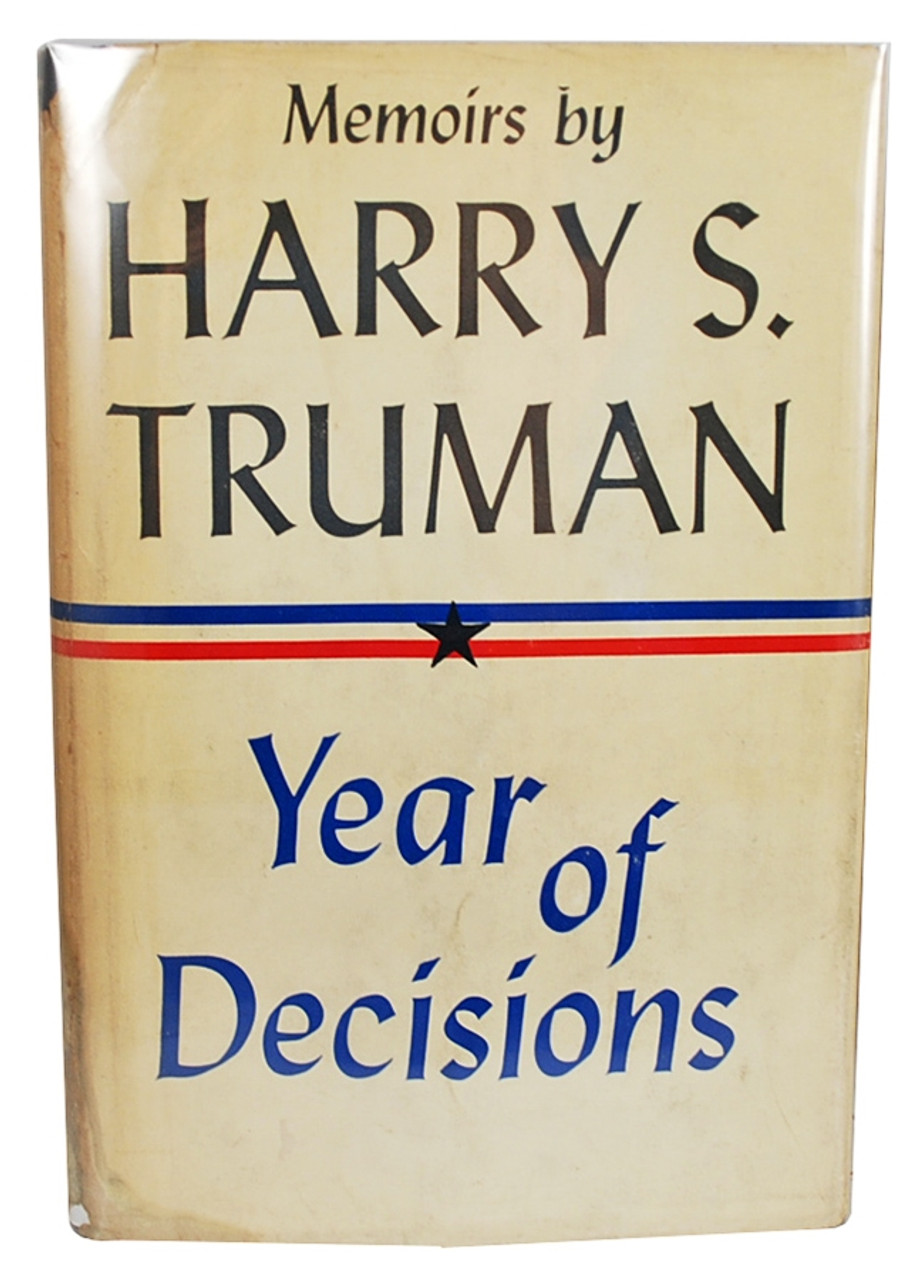 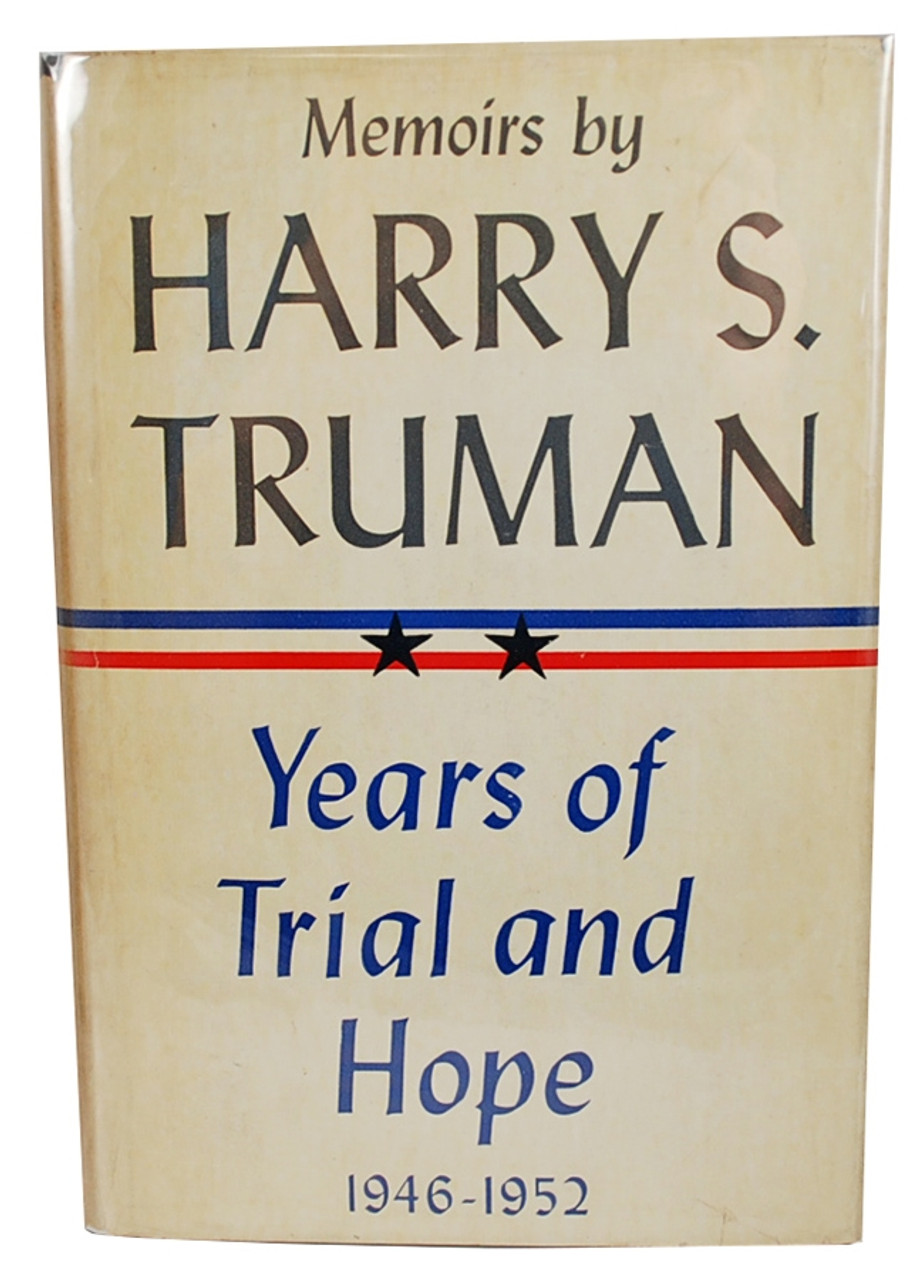 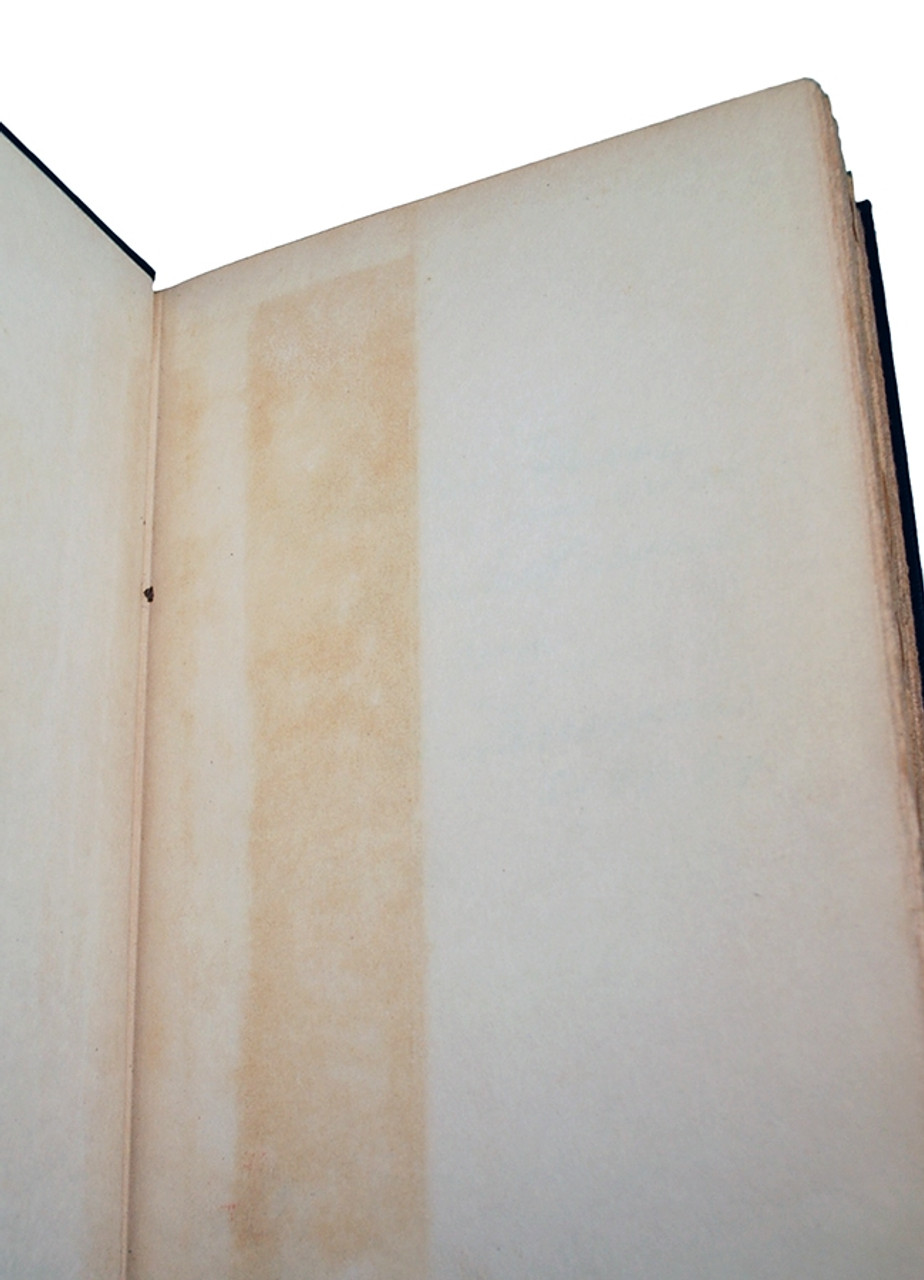 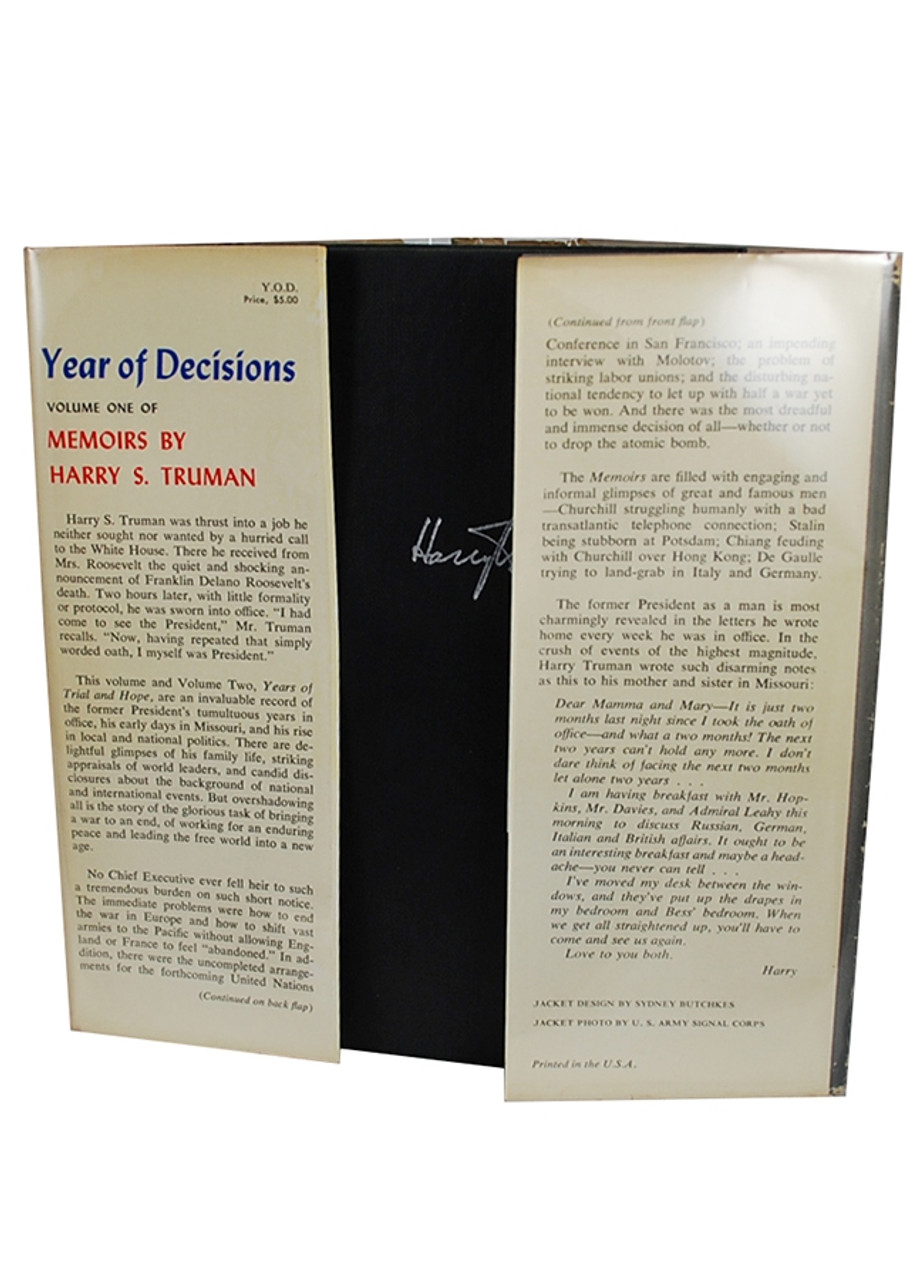 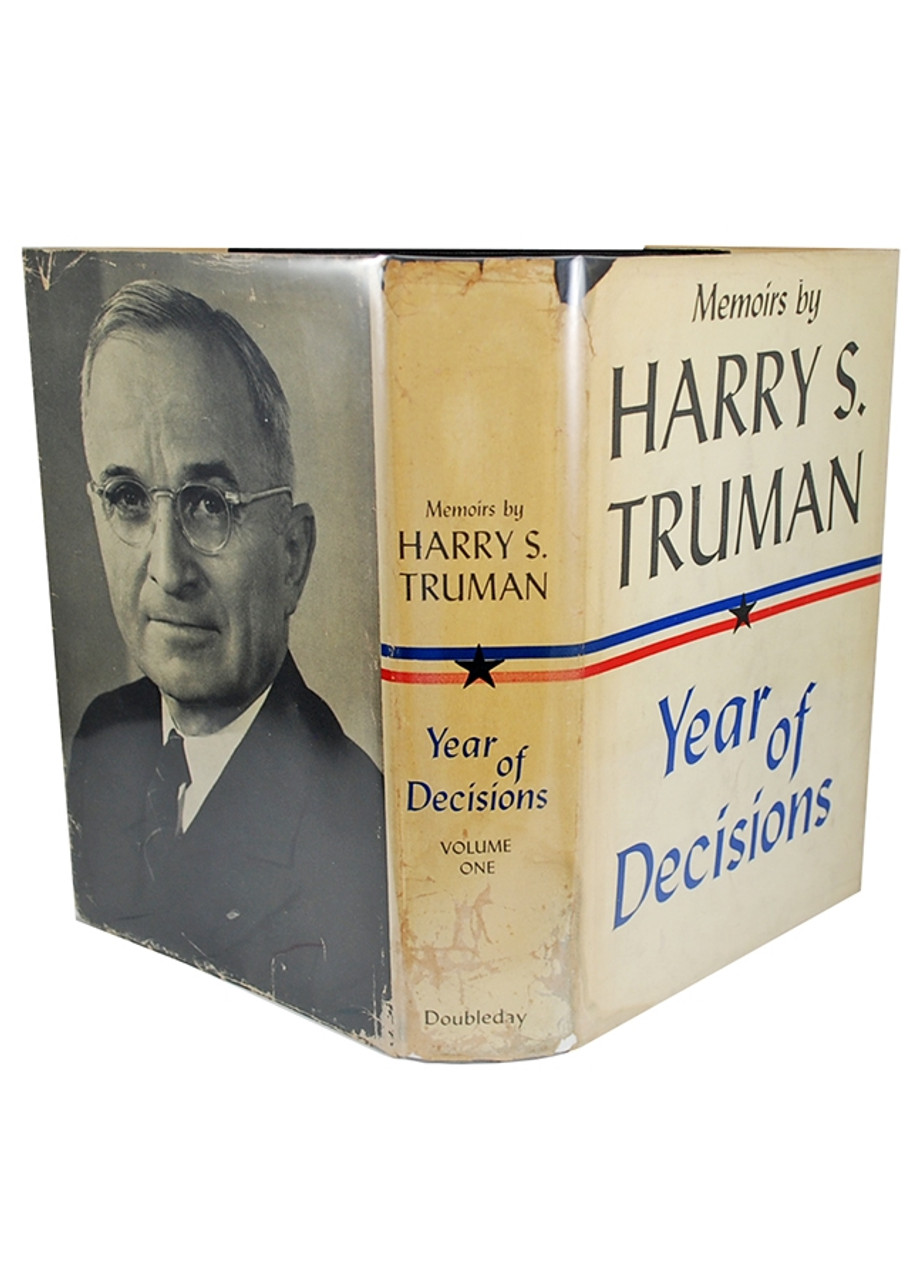 Both volumes have been personally signed by Harry S. Truman on the same day.

A historical treasure for the advanced collector. This set of books would make a unique addition to your presidential library. An incredible two-book set makes an extraordinary acquisition for collectors of historical volumes and Presidential memoirs. Each volume is a "First Edition" as stated on the copyright page.

Both volumes are hand signed and dated by Harry S. Truman directly onto the title page, with personalized inscriptions to the same family on 5-28-63. This is a rare find, as Truman nearly always signed only the first volume of his memoirs. There are very few signed copies of the second volume, and only a handful of complete sets with both volumes signed to the same family, on the same day.

This unique and highly valuable two-volume memoir set by the 33rd President of the United States, is an exceptional first-edition find. Two volume complete matching set.

The inscription for "Year of Decisions" reads:

"To Jonathan Sloane,
with kindest regards from
Harry Truman
5-28-63"

The second volume, "Years of Trial and Hope", is also signed and dated with a personal inscription:


Volume 1 - Doubleday 1955. Harry S. Truman "Memoirs by Harry S. Truman: Year of Decisions". Volume one is a "First Edition" as stated on the copyright page, and not a Book Club Edition. Near Fine with original Very Good dust-jacket with original price of $5.00 still showing on the inner flap. Signed by the author directly onto the title page with a personal inscription. 596 pages.

Volume 2 - Doubleday 1956. Harry S. Truman "Memoirs by Harry S. Truman: Years of Trial and Hope 1946-1953". First Edition as stated on the copyright page. Near Fine with original Very Good dust-jacket with original price of $5.00 still showing on the inner flap. Signed by the author directly onto the title page with a personal inscription. 594 pages.

Born in Missouri on May 8, 1884, Harry S. Truman was Franklin Delano Roosevelt's vice president for just 82 days before Roosevelt died, and Truman became the nation's 33rd president. In his first months in office, he ended World War II by dropping the atomic bomb on Japan. His policy of communist containment started the Cold War, and he initiated U.S. involvement in the Korean War. Truman left office in 1953 and died in 1972.

In this invaluable account, President Truman provides extraordinary insight into events and decisions that have shaped the world we live in. The momentous year, 1945, witnessed the accession of a new president in wartime, the first use of atomic weaponry, the end of the war with Japan and the founding of United Nations. Engaging and informal, Truman's Memoirs display the sterling character of a man who, thrust into a job he neither sought nor wanted, proved to be one of the ablest men ever to hold the office of the presidency.

Covering the major issues of Truman's administration, the substance is approached in this book issue by issue: atomic energy; the Taft-Hartley Act; universal military training; problems of security; the Brannan farm plan and his own goals in agriculture- hamstrung by Congress; the post-war procedures in atomic energy and the decision about the hydrogen bomb; the seizure of the steel mills; the issue of the Truman off-shore oil bill and the overriding of the veto; and, midway, the pattern of the political campaign and the election.

Throughout, the reader must begin to realize the concentrated devotion to the goals as he saw them, his determination to know every possible aspect of each subject before reaching a decision, the depth of understanding on a wide range of topics, occasional snap judgments, errors in conclusion, more than offset by long term thinking and courage in risking condemnation of public opinion, within as well as without the party. In these pages Harry S. Truman grows in stature, and the final verdict of history is implicit in the story.

Harry S. Truman (May 8, 1884 – December 26, 1972) was the 33rd President of the United States (1945–1953), taking office upon the death of Franklin D. Roosevelt. A World War I veteran, he assumed the presidency during the waning months of World War II and the beginning of the Cold War. He is known for implementing the Marshall Plan to rebuild the economy of Western Europe, for the establishment of the Truman Doctrine and NATO against Soviet and Chinese Communism, and for intervening in the Korean War.

In domestic affairs, he was a moderate Democrat whose liberal proposals were a continuation of Franklin Roosevelt's New Deal, but the conservative-dominated Congress blocked most of them. He used the veto power 180 times, more than any president since and saw 12 overridden by Congress; only Grover Cleveland and Franklin D. Roosevelt used the veto more often, and only Gerald Ford and Andrew Johnson saw so many veto overrides. He is the only world leader to have used nuclear weapons in war. He desegregated the U.S. Armed Forces, supported a newly independent Israel and was a founder of the United Nations.
Volume One - Unread book with square and tight spine in Near Fine condition with the original Very Good chipped dust jacket, with original price. Sharp corners with clean and flat boards. Some age discoloration from on the FFEP.

Volume Two - Unread book with square and tight spine in Near Fine condition with the original Very Good dust jacket that shows light chipping and a short closed tear. Sharp corners with clean and flat boards. No attached bookplates or indication of any removed.
A lovely set, not commonly found in this condition.

"An incomparable stylist and enter