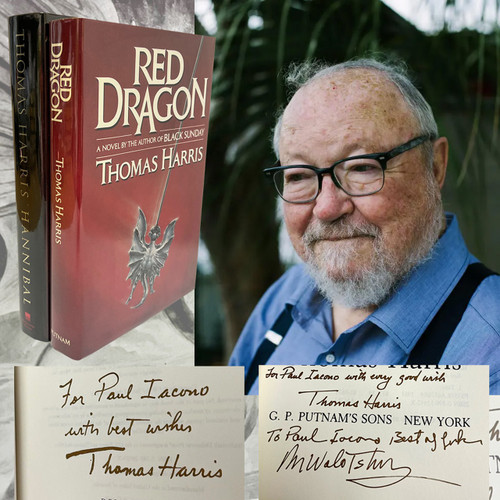 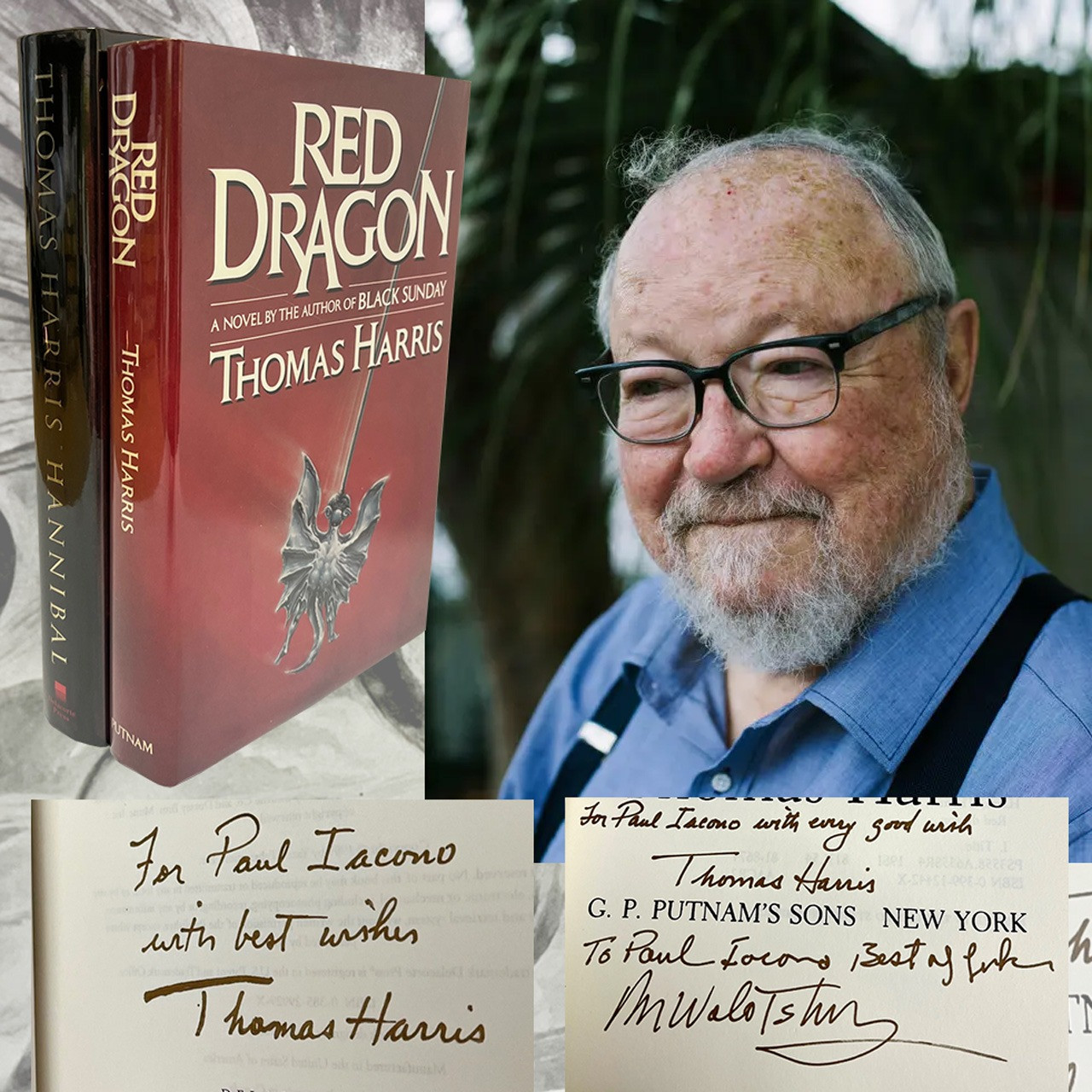 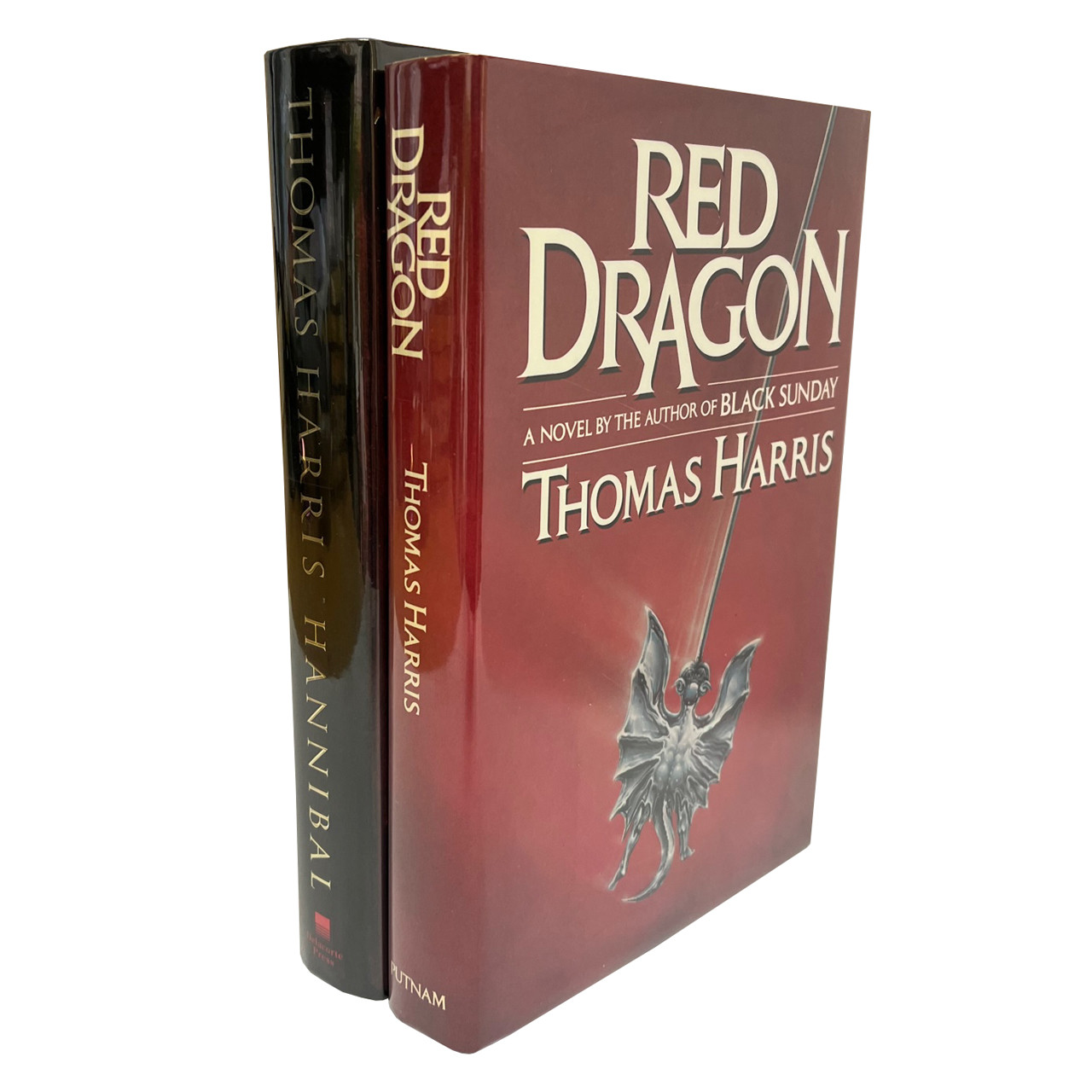 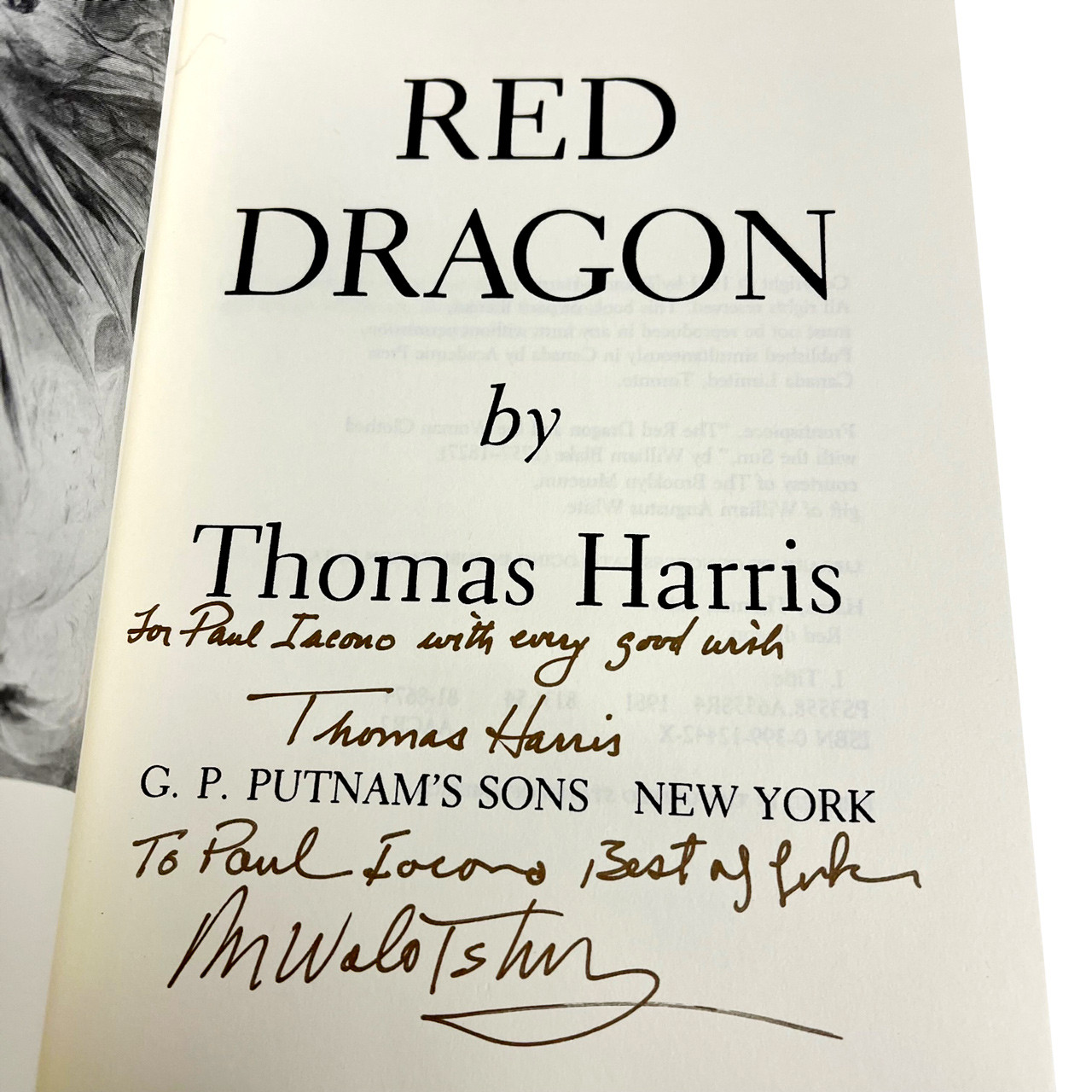 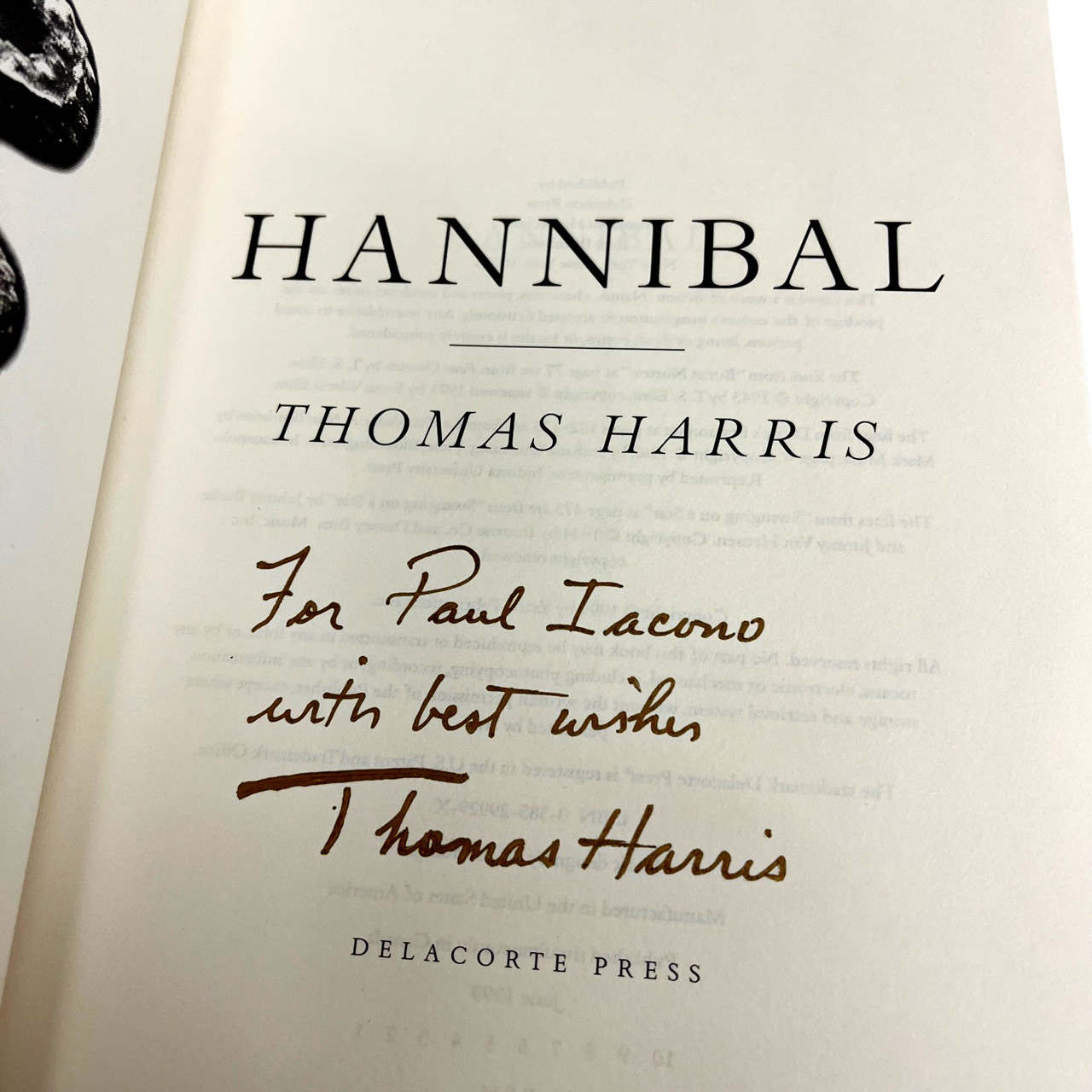 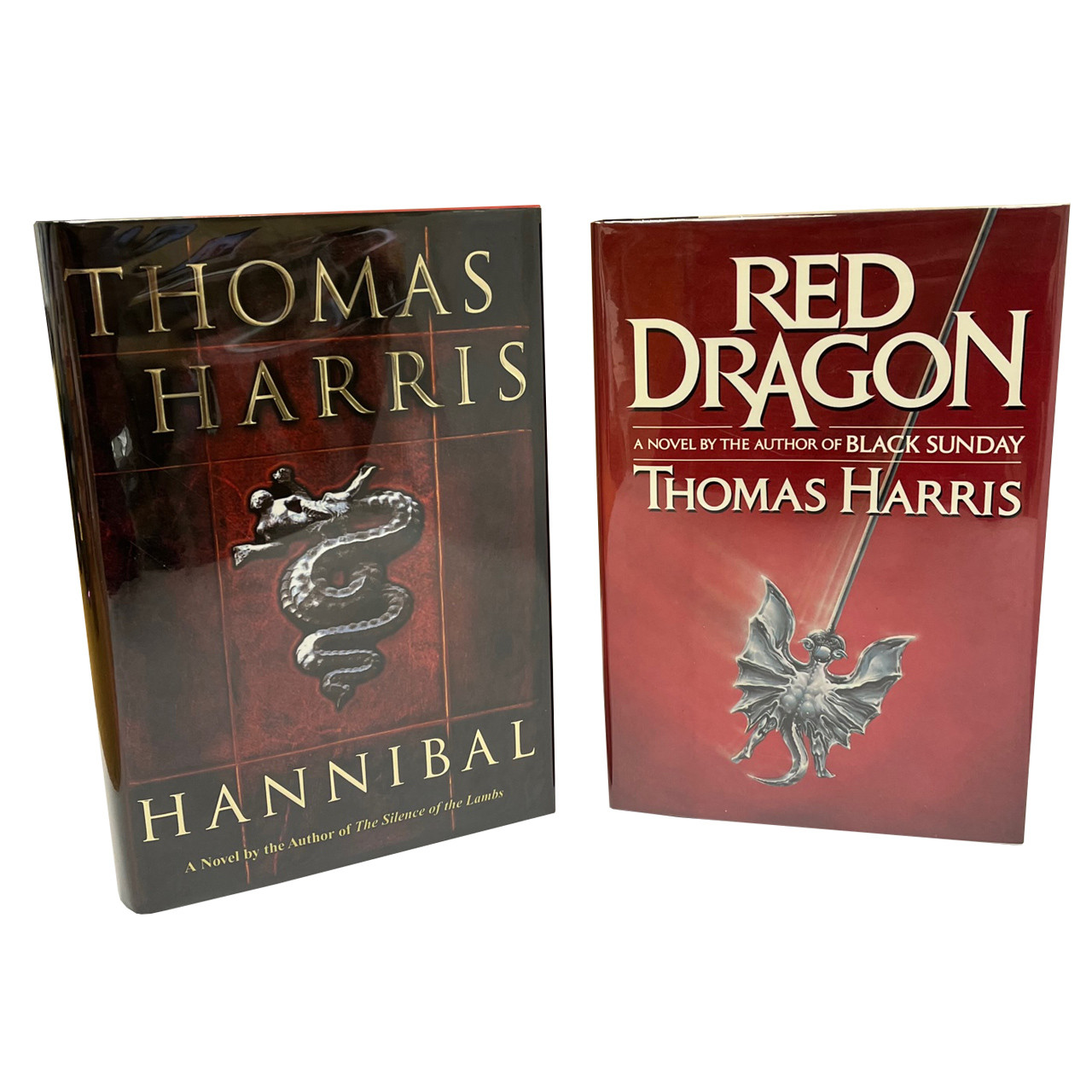 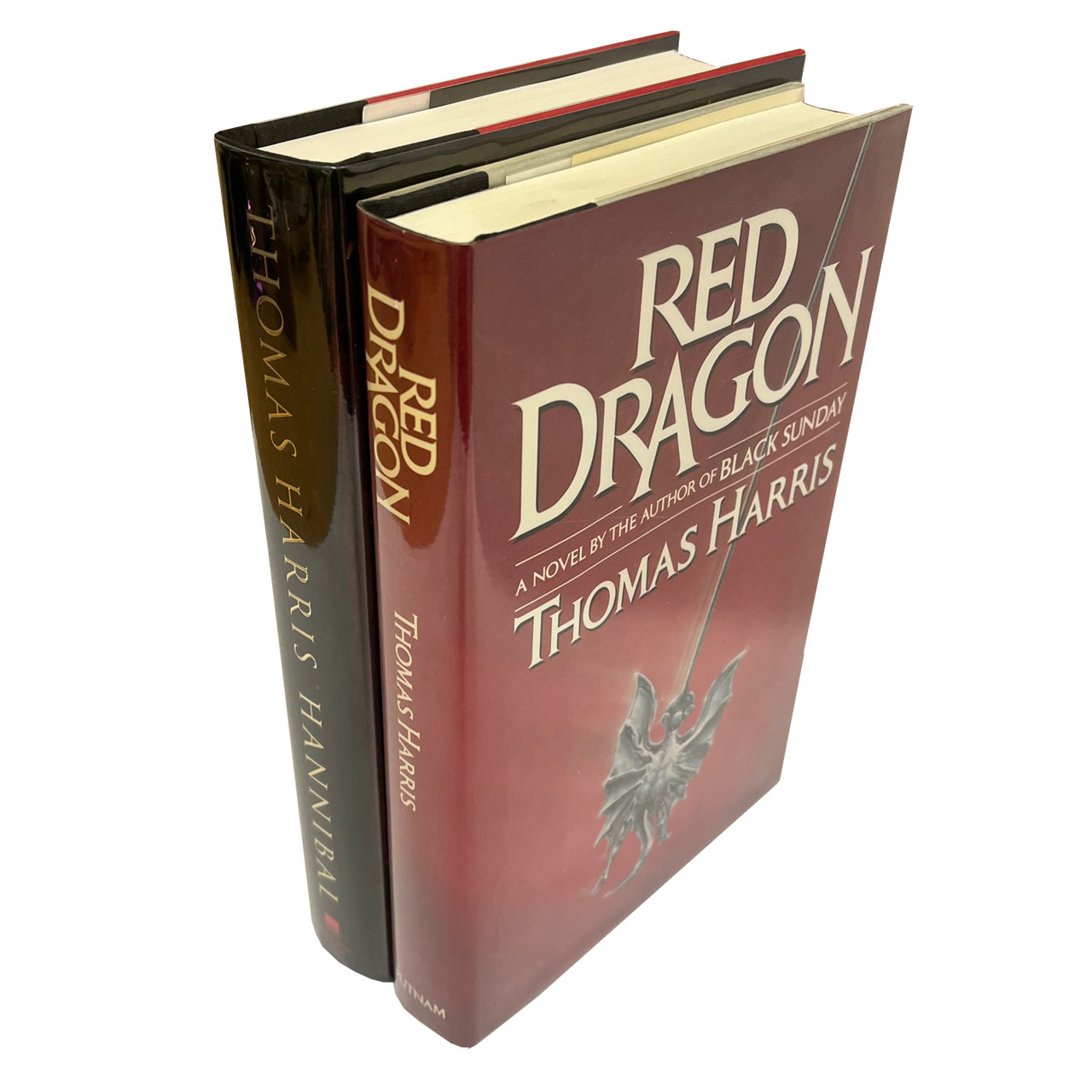 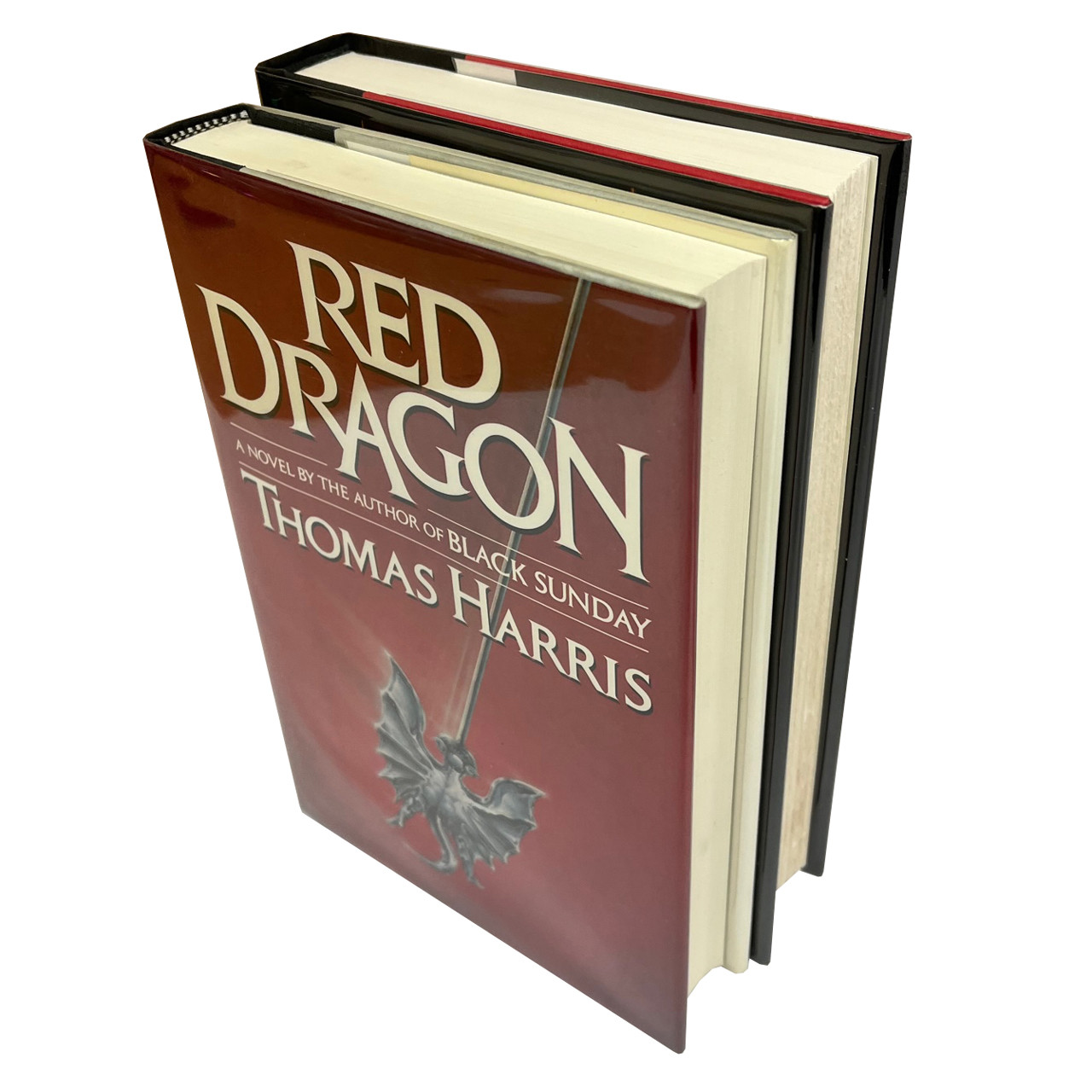 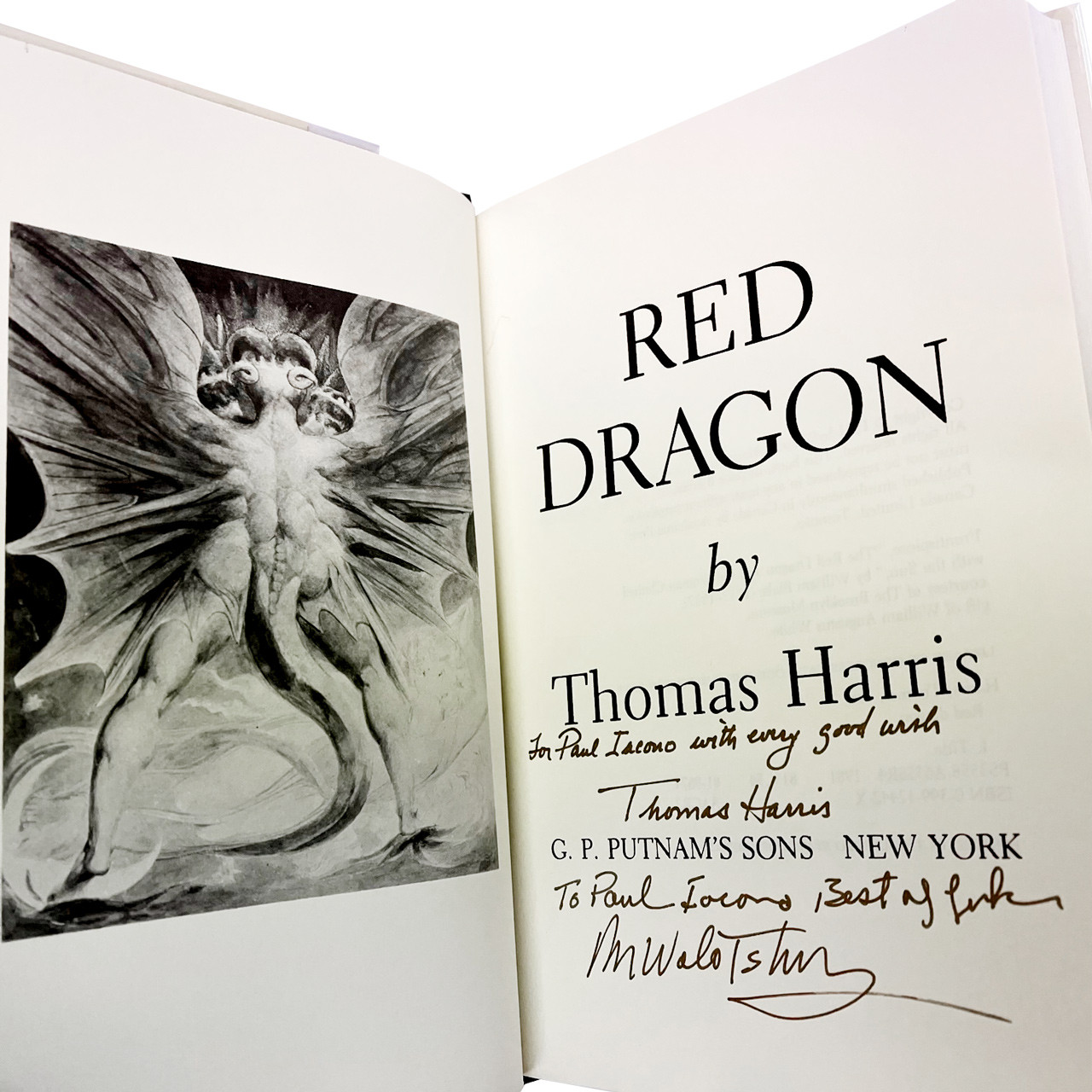 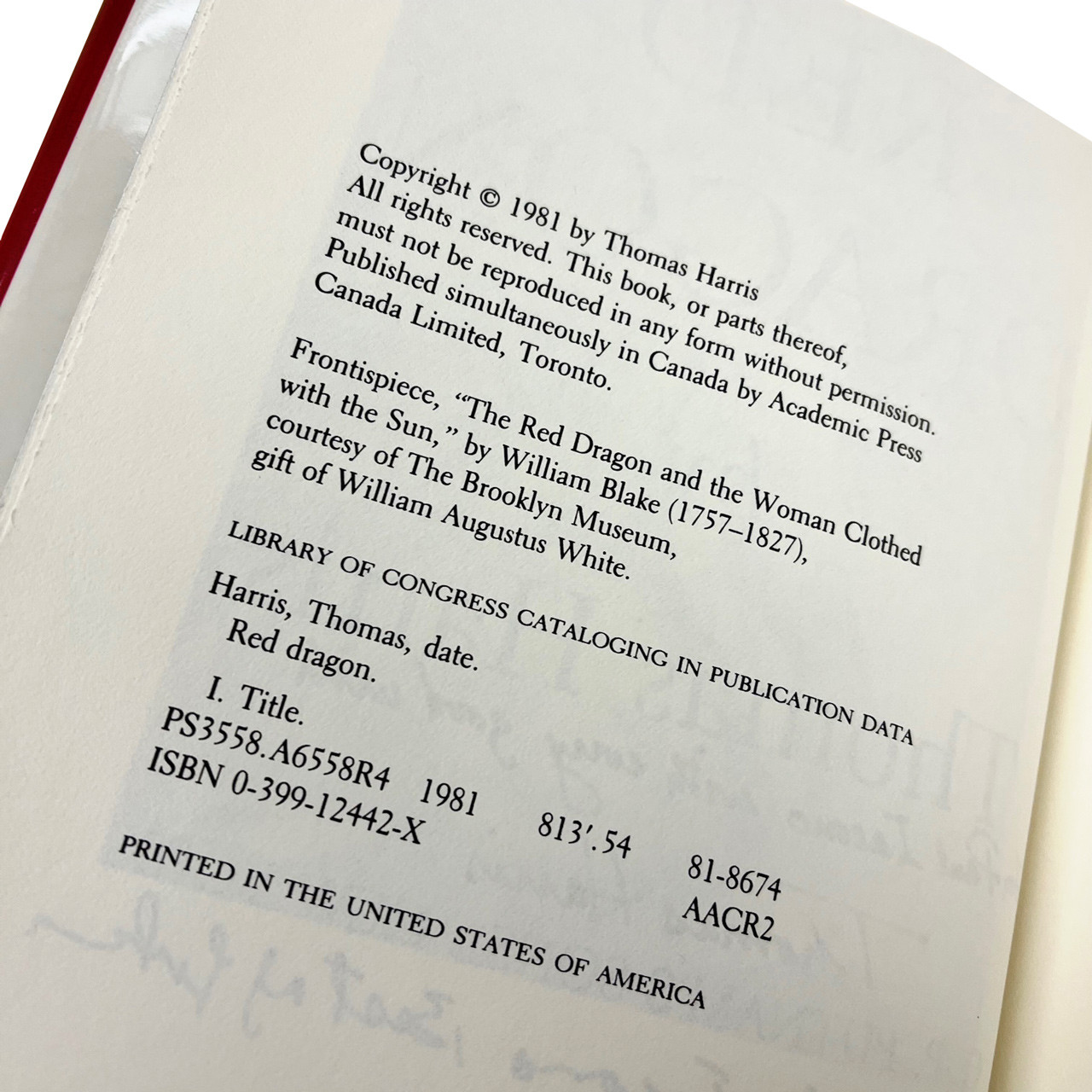 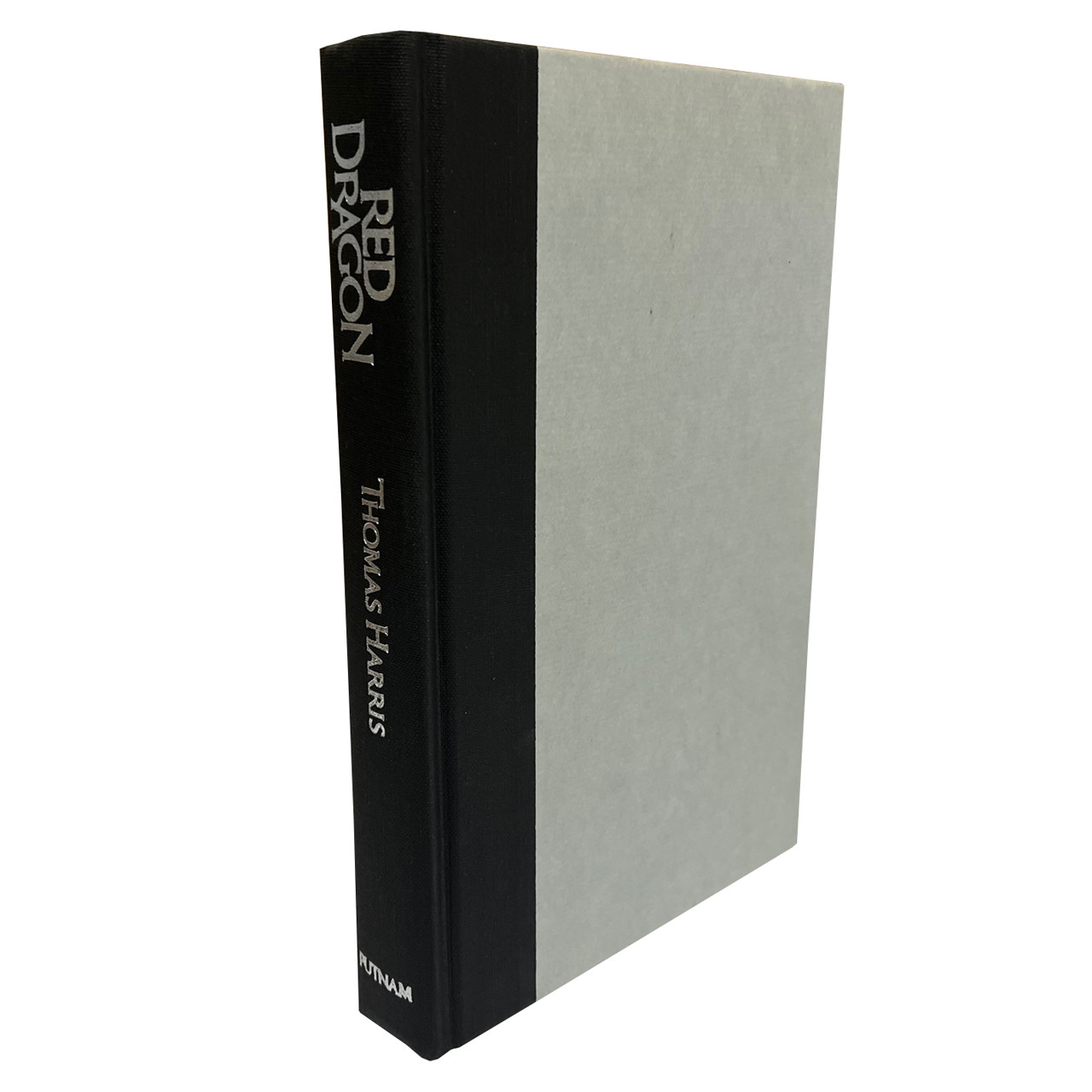 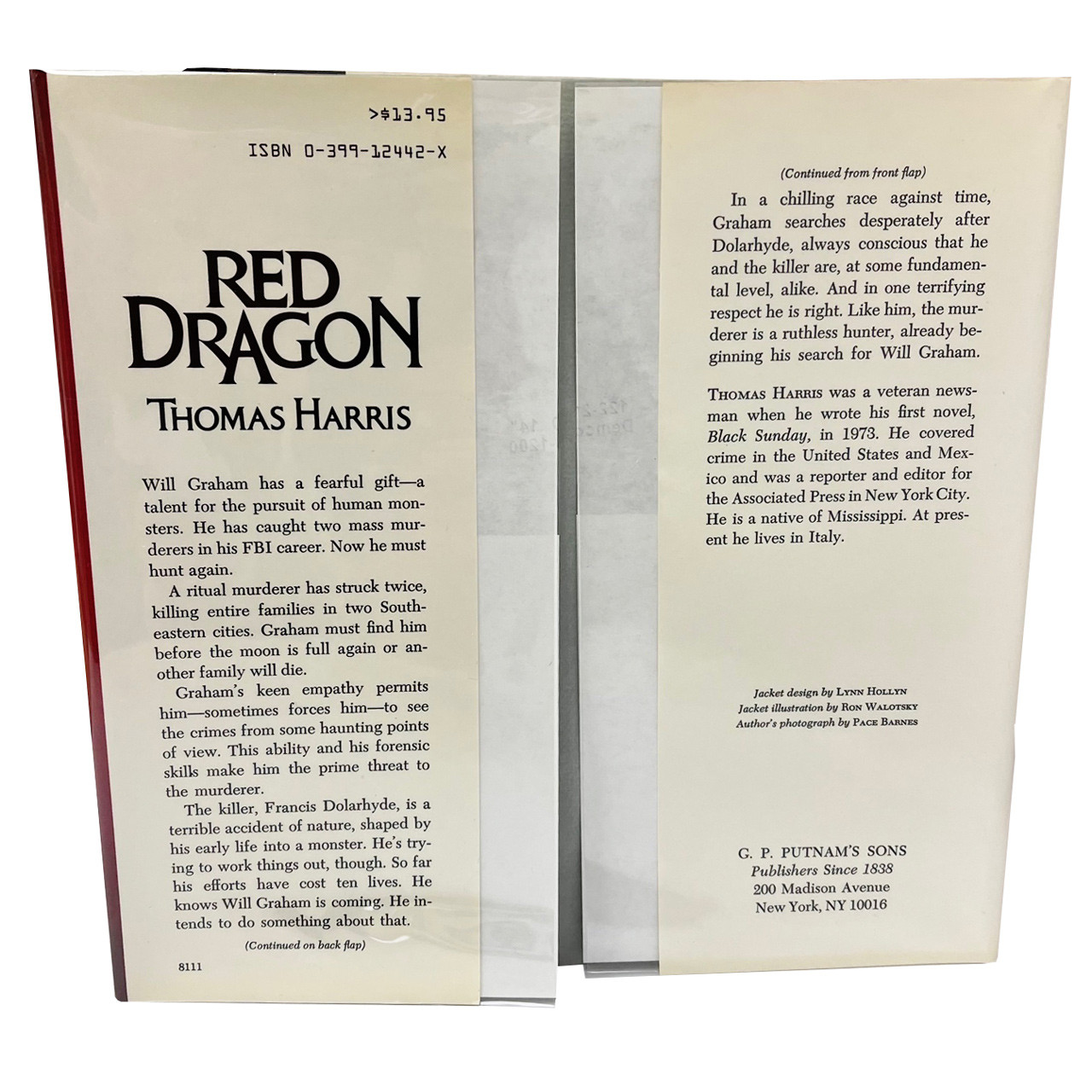 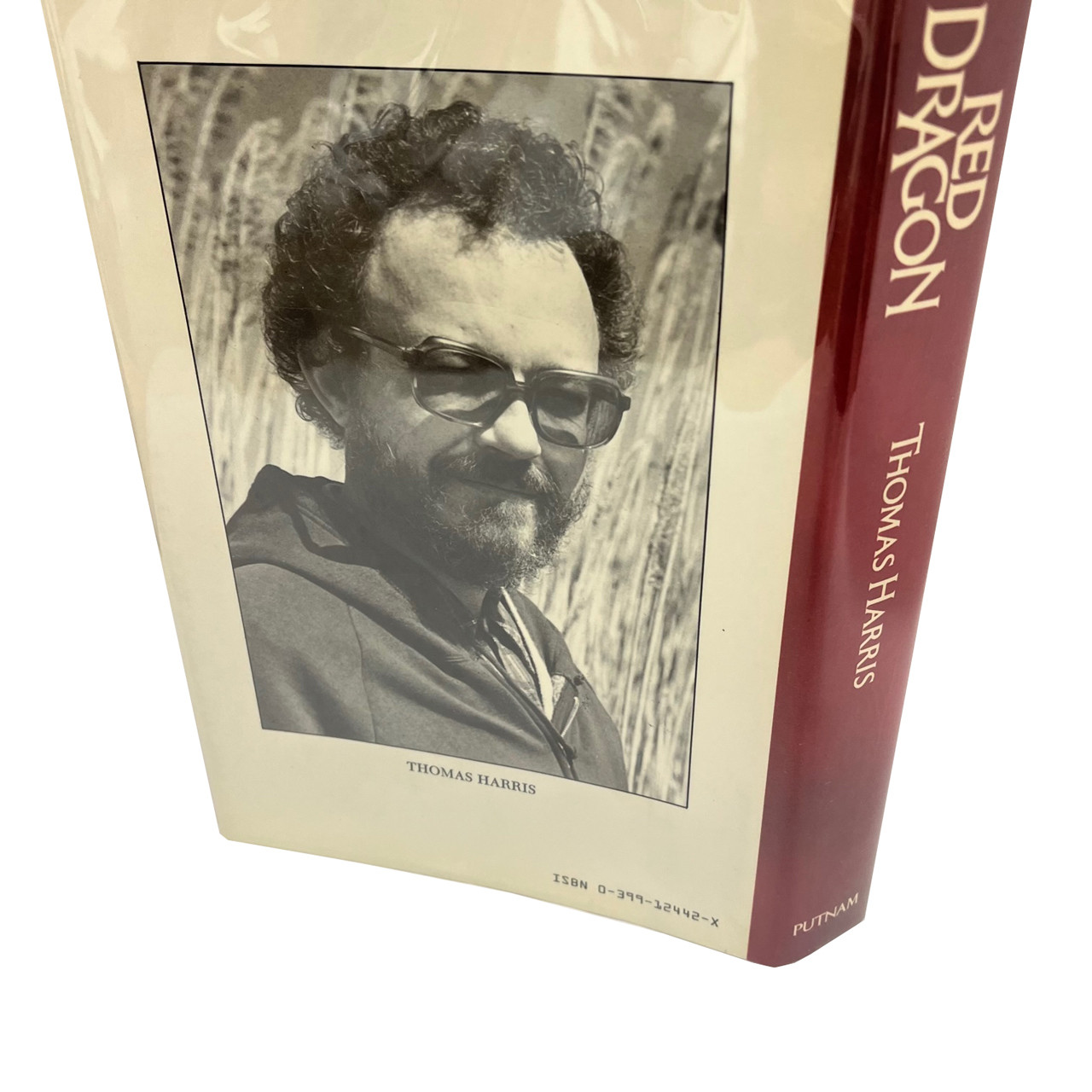 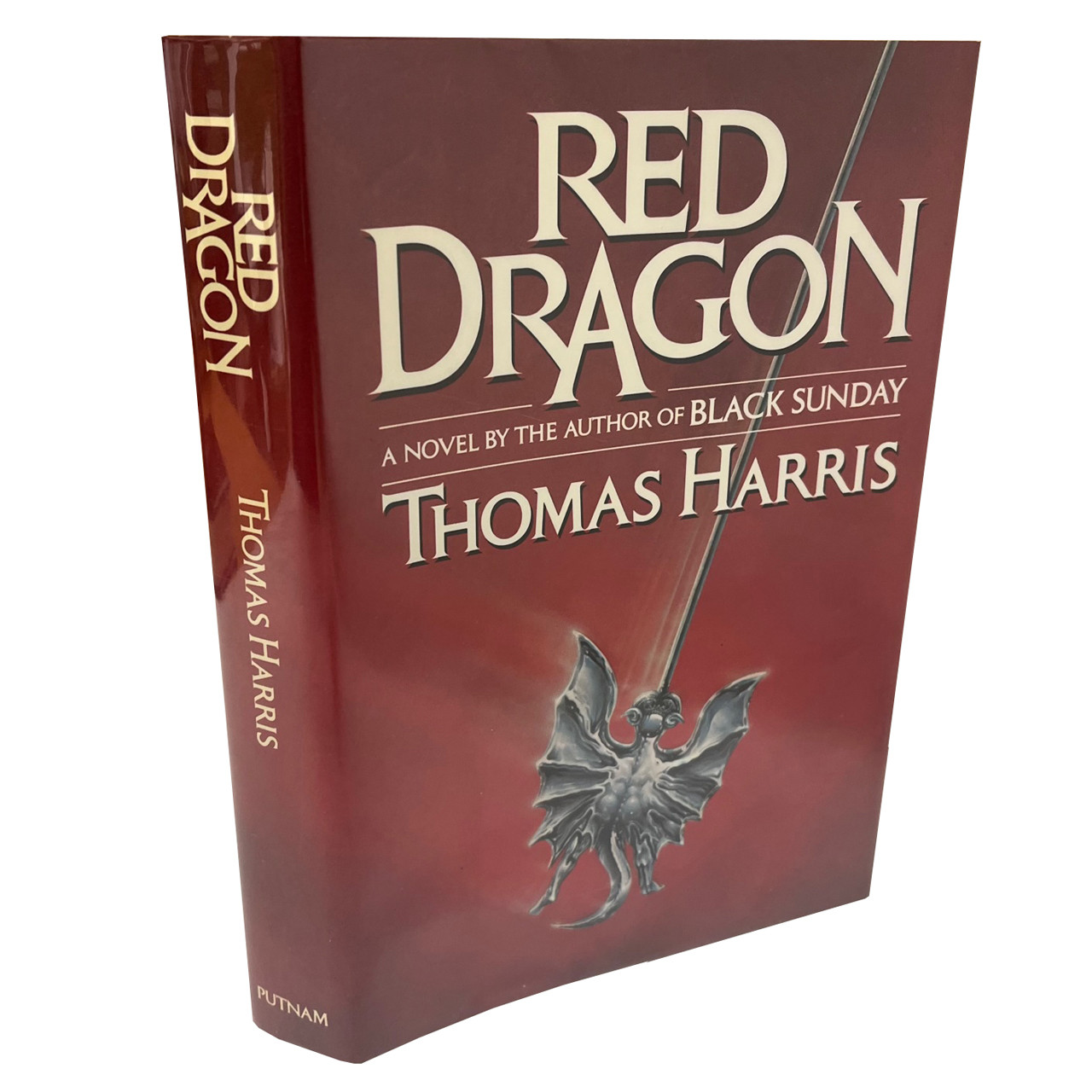 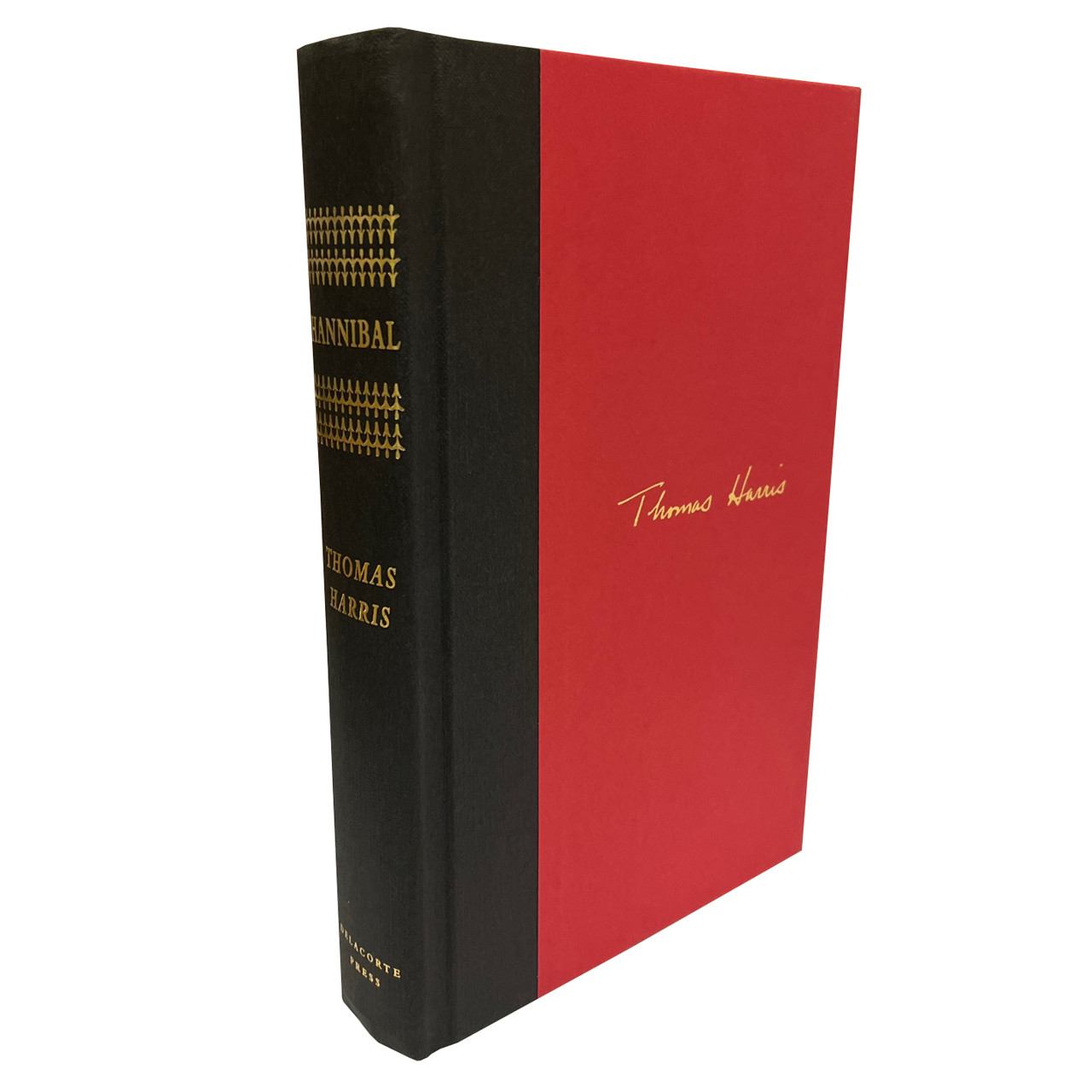 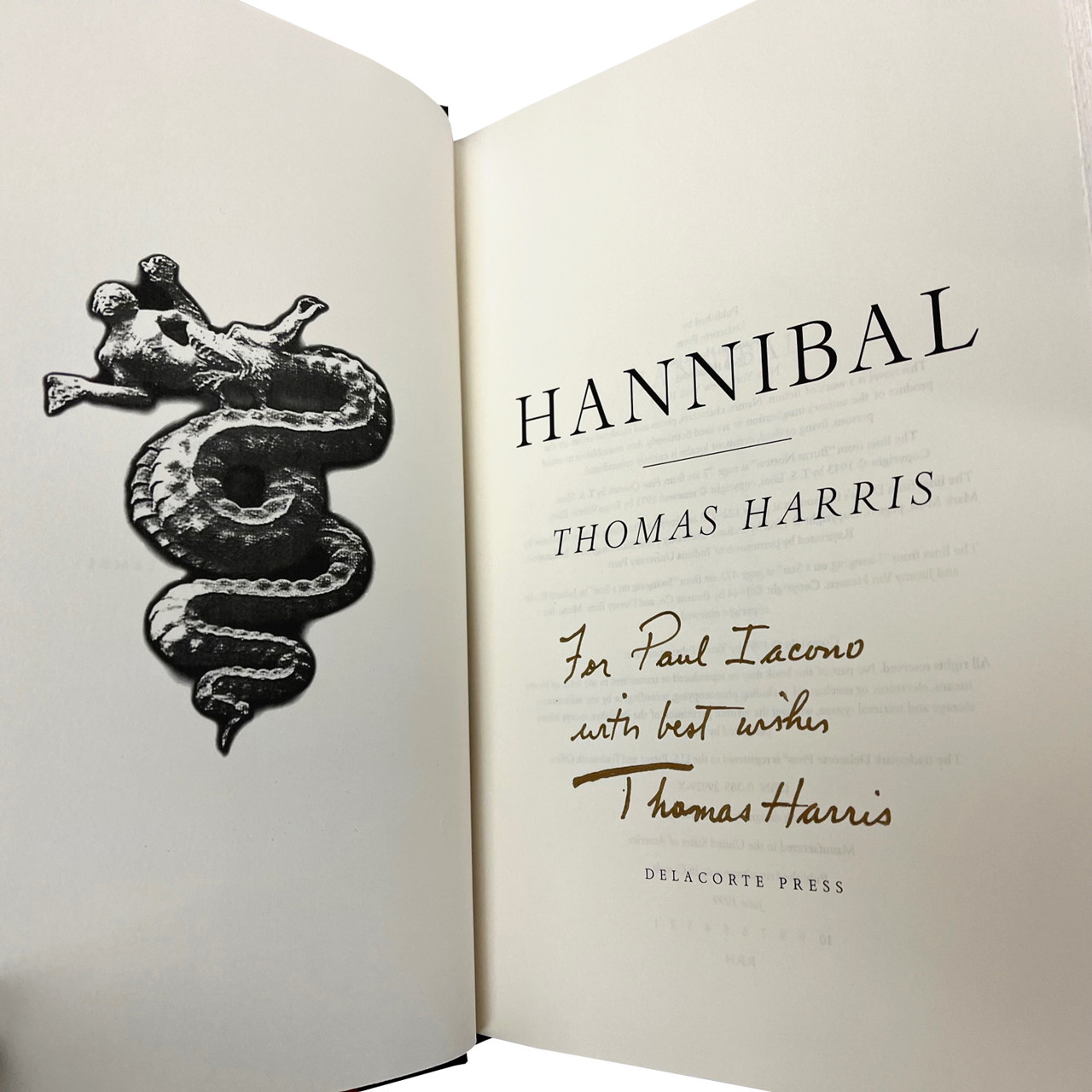 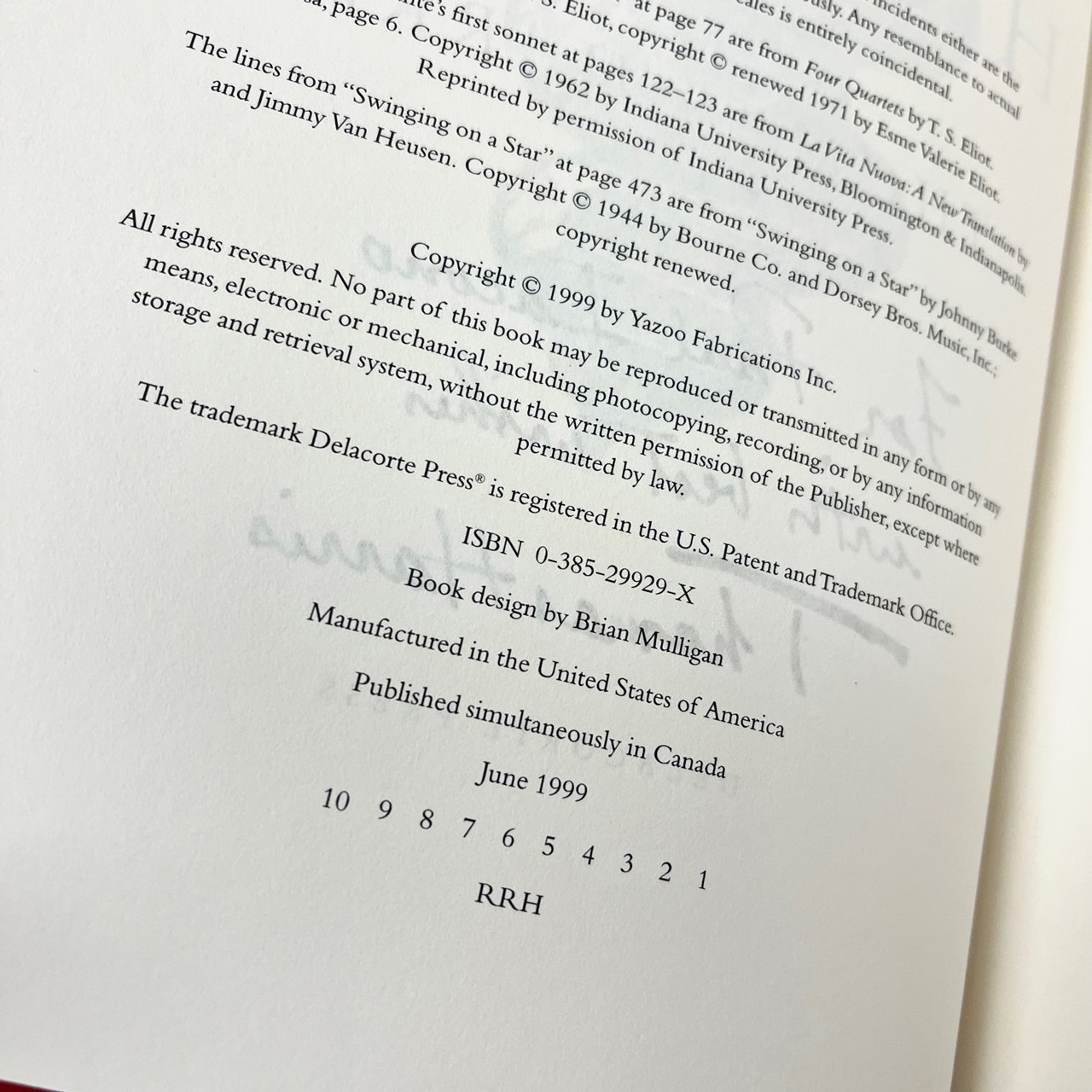 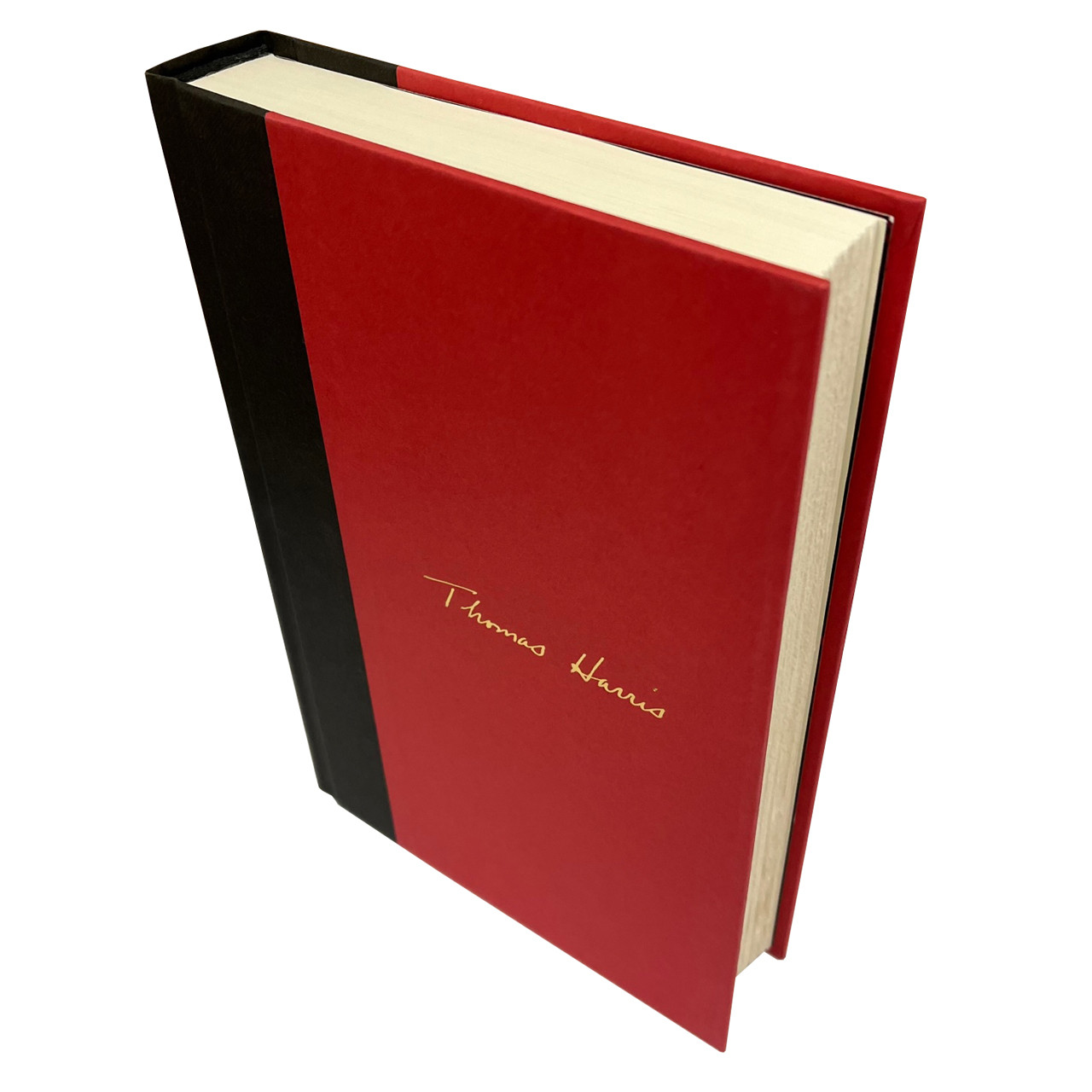 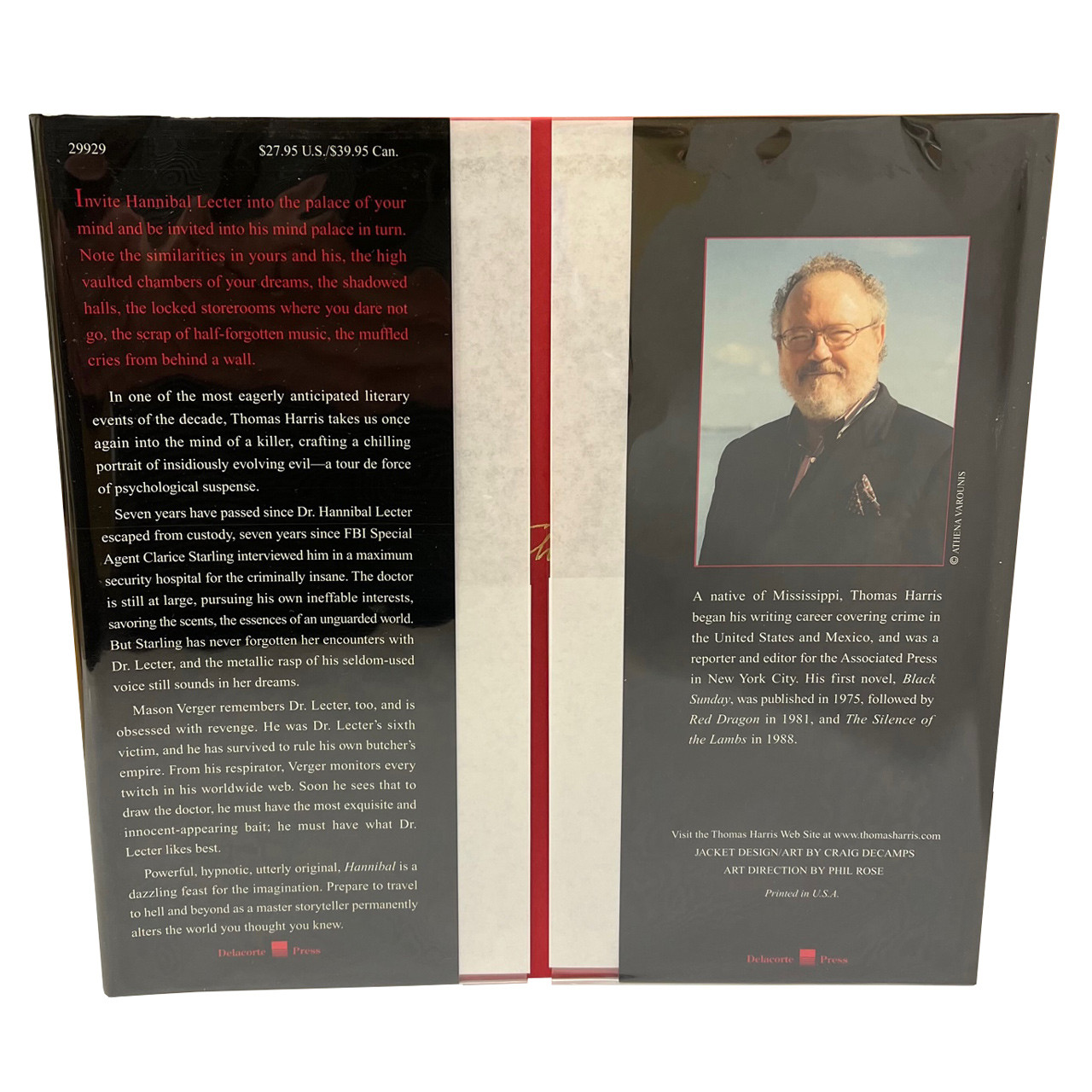 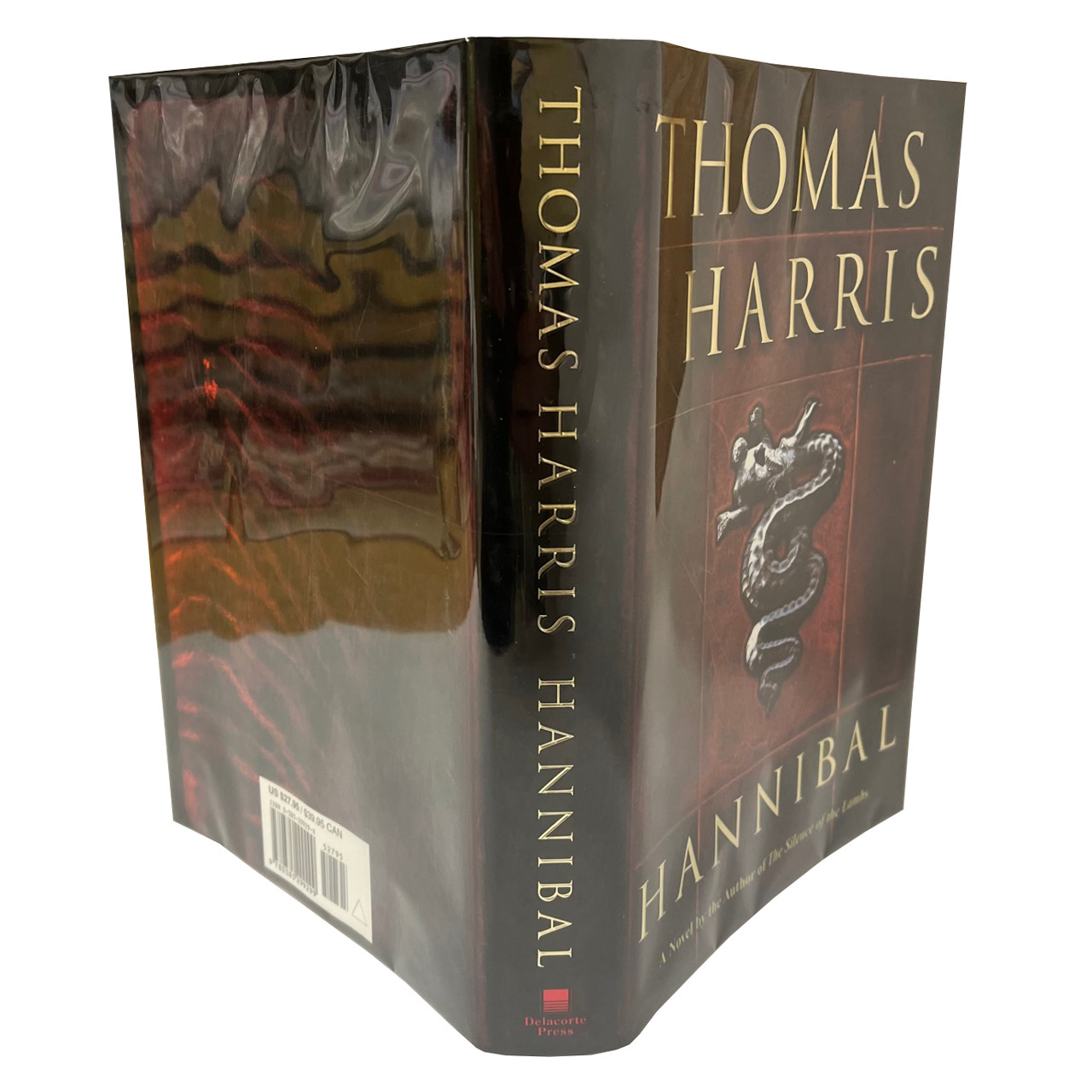 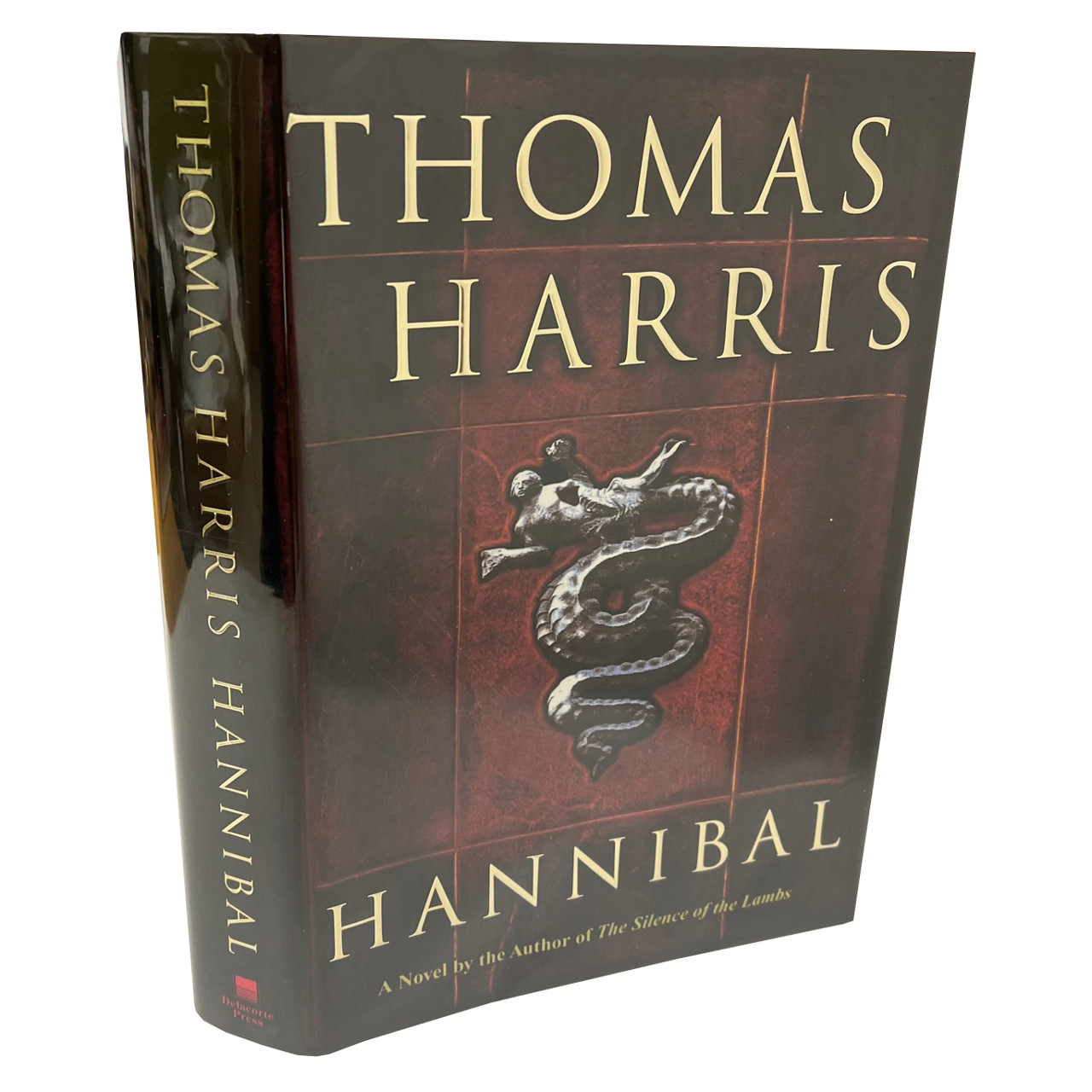 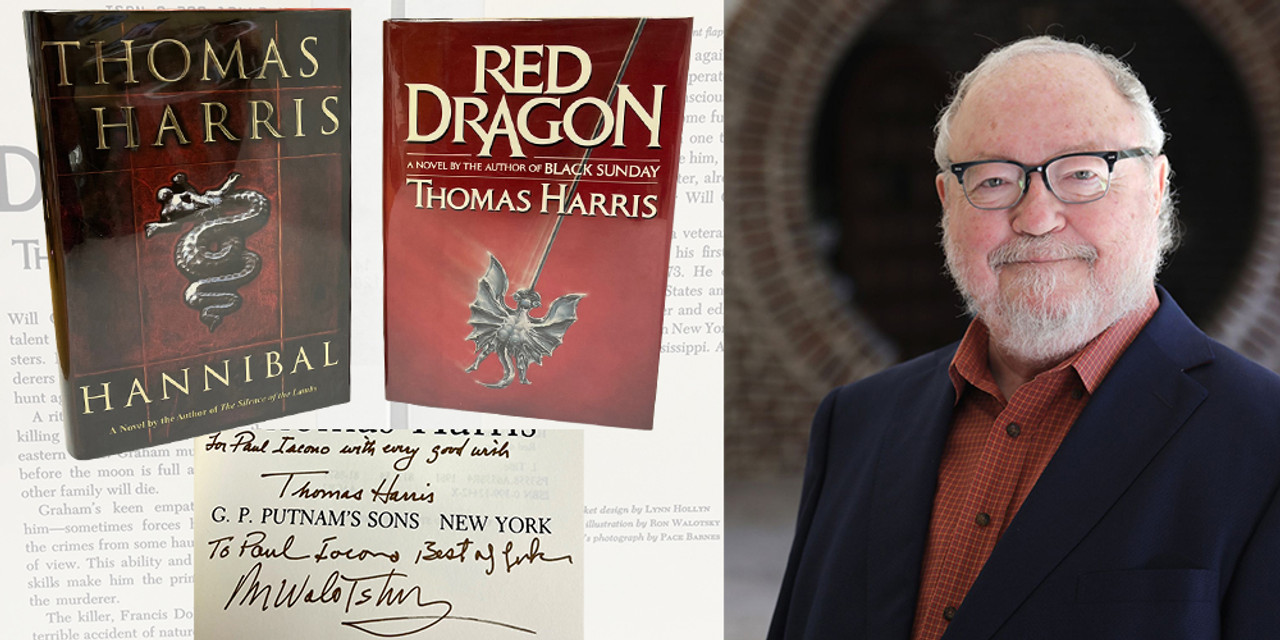 “Is it as good as Red Dragon and Silence of the Lambs? No . . . this one  is better.”—Stephen King, The New York Times Book Review

First Edition Set of "Red Dragon" and "Hannibal", each one personally signed by Thomas Harris directly onto the title page.

RED DRAGON HAS ALSO BEEN INSCRIBED BY RON WALOTSKY, WHO DID THE INTERIOR ARTWORK 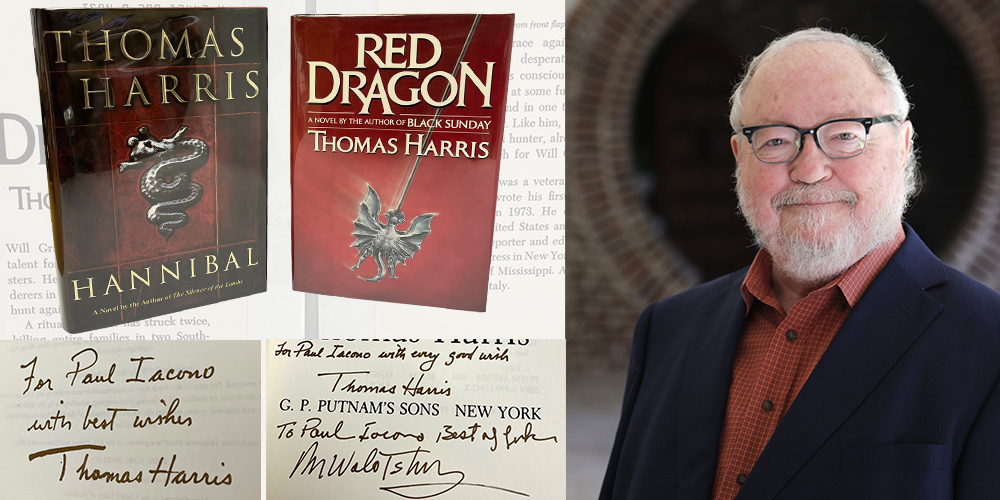 Both first editions have been inscribed to the same person.

Personally inscribed by Thomas Harris directly onto the title page:

"For Paul Iacono with every good wish, Thomas Harris"

This book has also been inscribed by Ron Walotsky, who did the interior artwork for Red Dragon:

Personally inscribed by Thomas Harris directly onto the title page:

Hannibal is a novel by American author Thomas Harris, published in 1999. It is the third in his series featuring Dr. Hannibal Lecter and the second to feature FBI Special Agent Clarice Starling. The novel takes place seven years after the events of The Silence of the Lambs and deals with the intended revenge of one of Lecter's victims. It was adapted as a film of the same name in 2001, directed by Ridley Scott. Elements of the novel were incorporated into the second season of the NBC television series Hannibal, while the show's third season adapted the plot of the novel.

Relentless and endlessly terrifying, Hannibal by Thomas Harris is the bestselling sequel to The Silence of the Lambs, and the third novel in the Hannibal series.

Seven years have passed since the events of The Silence of the Lambs. Hannibal Lecter is on the run in Florence, Italy and for three individuals, the final hunt has begun: a multimillionaire who Hannibal left horrifically maimed, a corrupt Italian policeman, and FBI agent Clarice Starling, who once stood before Lecter and has never been the same. All of them, in their separate ways, want to find Dr. Lecter, and all three will get their wish. But will they live long enough to savor the reward?

The publication of Hannibal in 1999 was considered one of the most eagerly anticipated literary events of the decade, with Thomas Harris taking us once again into the mind of his iconic serial killer, crafting a chilling portrait of insidiously evolving evil. Peers and critics alike hailed the novel a tour de force of psychological suspense. Stephen King opined, “Is it as good as Red Dragon and The Silence of the Lambs? No, this one is better. It is, in fact, one of the two most frightening popular novels of our time, the other being The Exorcist.” The Los Angeles Times raved, “Hannibal speaks to the imagination, to the feelings, to the passions, to exalted senses and to debased ones. Harris’s voice will be heard for a while.”

In 2001, Hannibal was adapted into a film directed by Ridley Scott, in which Anthony Hopkins reprised his Oscar-winning performance as Hannibal Lecter. 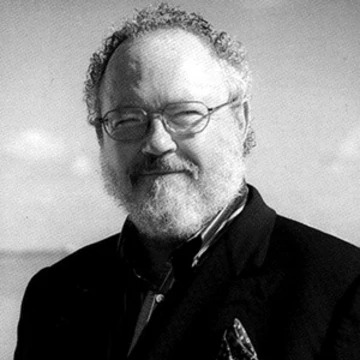 You remember Hannibal Lecter: gentleman, genius, cannibal. Seven years have passed since Dr. Lecter escaped from custody. And for seven years he’s been at large, free to savor the scents, the essences, of an unguarded world.

But intruders have entered Dr. Lecter’s world, piercing his new identity, sensing the evil that surrounds him. For the multimillionaire Hannibal left maimed, for a corrupt Italian policeman, and for FBI agent Clarice Starling, who once stood before Lecter and who has never been the same, the final hunt for Hannibal Lecter has begun. All of them, in their separate ways, want to find Dr. Lecter. And all three will get their wish. But only one will live long enough to savor the reward. . . .

“Interested in getting the hell scared out of you? Buy this book on a Friday . . . lock all doors and windows. And by Monday , you might just be able to sleep without a night-light.”—Newsday

“Strap yourself in for one heck of a ride. . . . It’ll scare your socks off.”—Denver Post

“A stunner . . . writing in language as bright and precise as a surgeon’s scalpel, Harris has created a world as mysterious as Hannibal’s memory palace and as disturbing as a Goya painting. This is one book you don’t want to read alone at night.”—The Atlanta Journal-Constitution

“Relentless . . . endlessly terrifying . . . 486 fast-paced pages, in which every respite is but a prelude to further furious action . . . Hannibal begins with a murderous paroxysm that leaves the reader breathless. . . . Hannibal speaks to the imagination, to the feelings, to the passions, to exalted senses and to debased ones. Harris’s voice will be heard for a while.”—Los Angeles Times

“Enormously satisfying . . . a smashing good time, turning the pages for thrills, chills, horror and finally, a bracing, deliciously wicked slap in the face . . . perhaps the very best the thriller/horror genre is capable of producing.”—San Diego Union-Tribune

Harris writes his villains with a profound complexity. This, combined with his attention to the detail of FBI and police operations, added harrowing realism to his novel, and to the genre itself. The success of Red Dragon would lead to two sequels and a prequel in the Hannibal series. The book has been adapted into two feature films; Manhunter in 1986 and Red Dragon in 2002. This is the first signed limited edition of the novel.

“The best popular novel to be published in America since The Godfather.”—Stephen King

“Want to faint with fright? Want to have your hair stand on end? Want to read an unforgettable thriller with equal parts of horror and suspense? Harris was obviously only warming up with his best seller Black Sunday.”—New York Daily News

“Irresistible...A shattering thriller...Readers should buckle themselves in for a long night’s read because from the first pages...Harris grabs hold.”—Publishers Weekly

“The scariest book of the season.”—The Washington Post Book World

“Easily the crime novel of the year.”—Newsday

Fine/Fine for both first editions. The condition is of the highest quality without any discernible flaws. Sharp corners that are not bumped. The books appear unread with square and tight spines. No attached bookplates or indication of any removed.