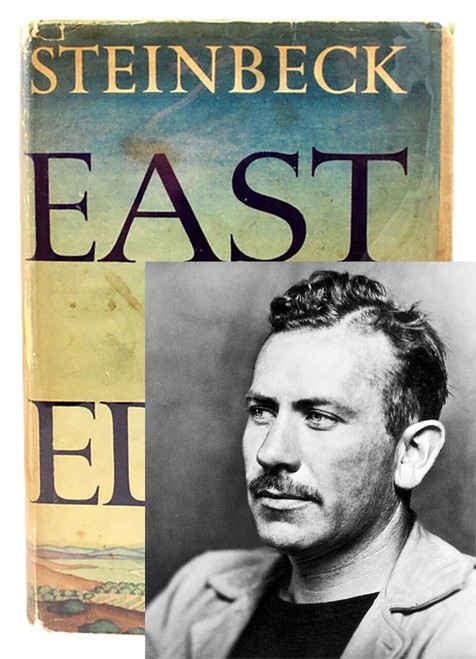 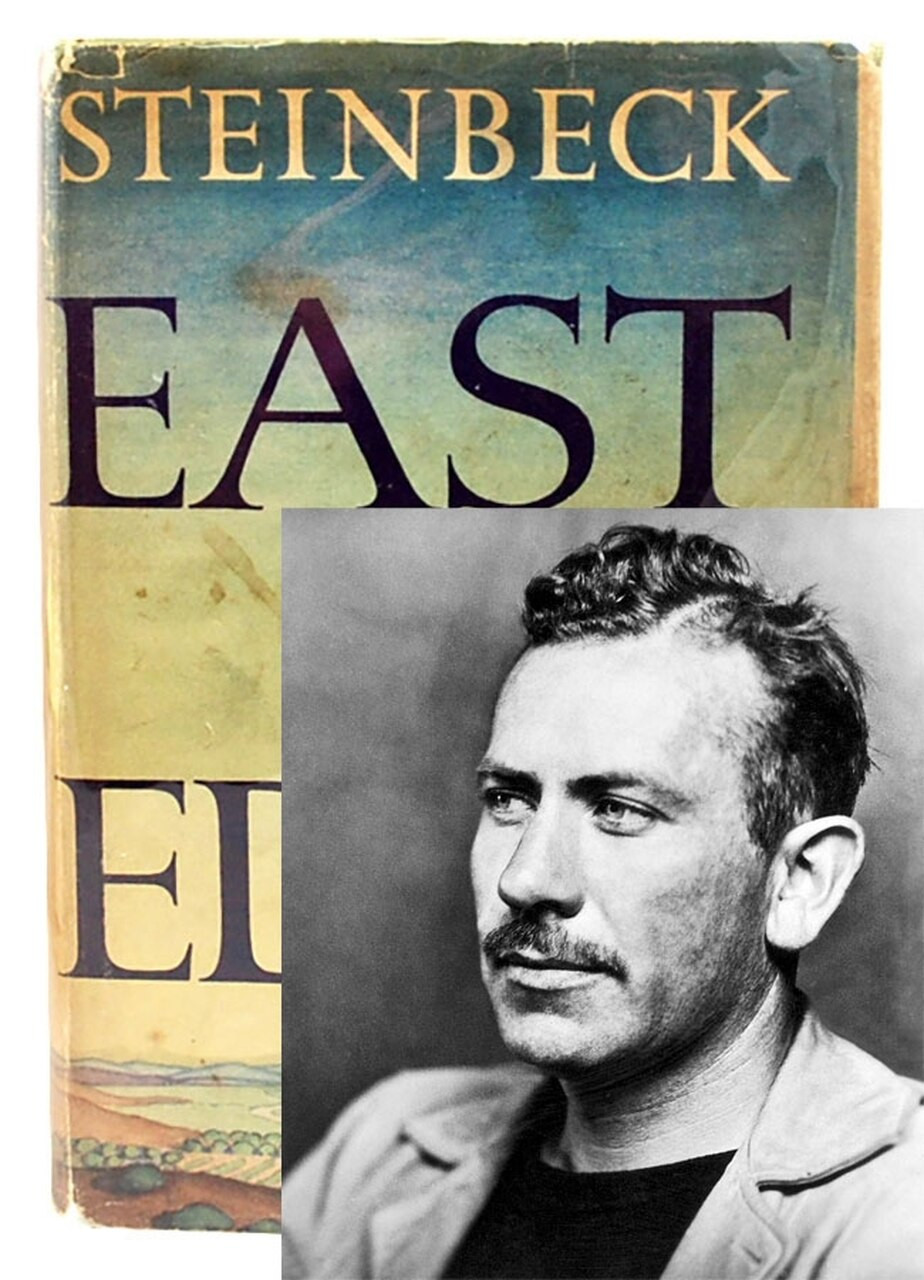 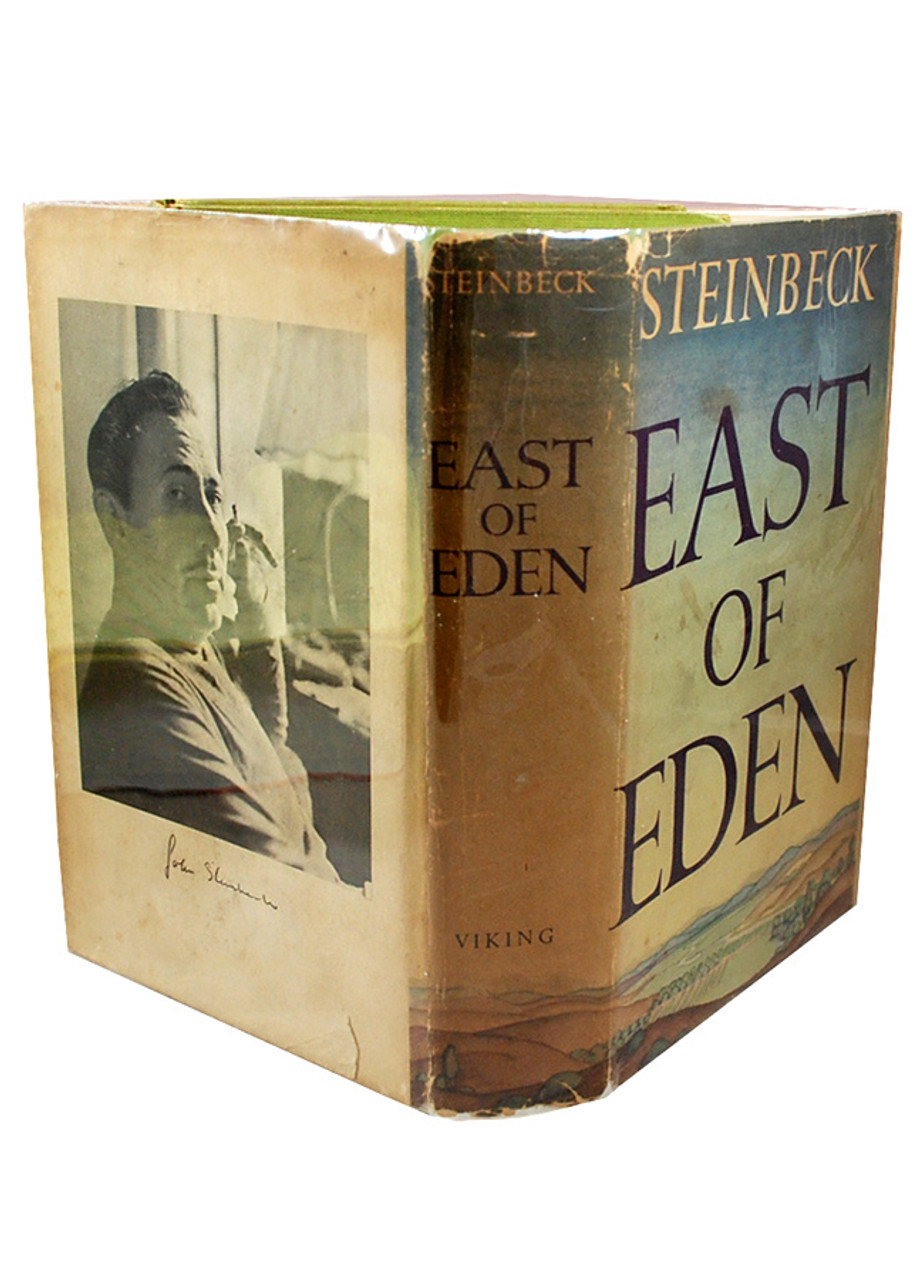 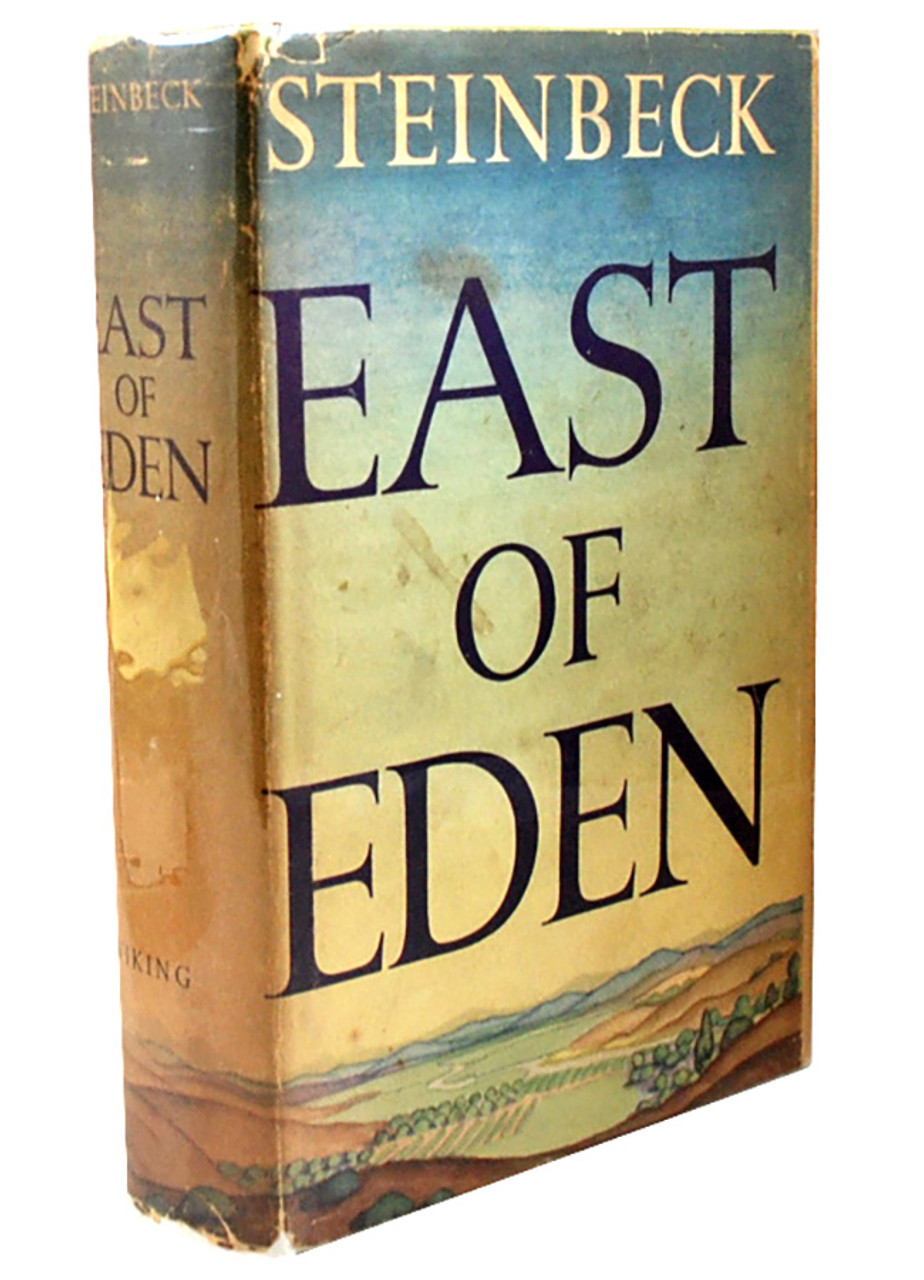 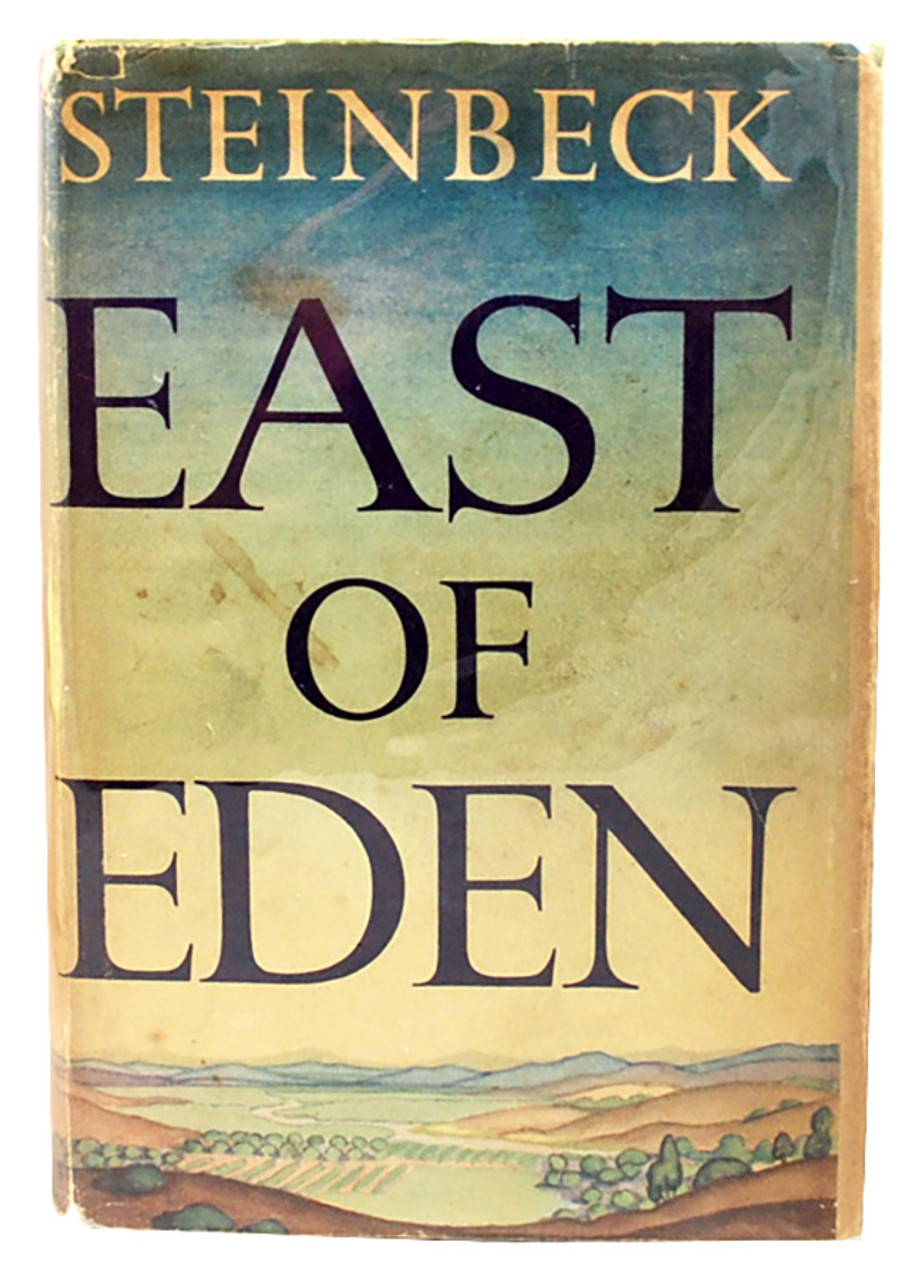 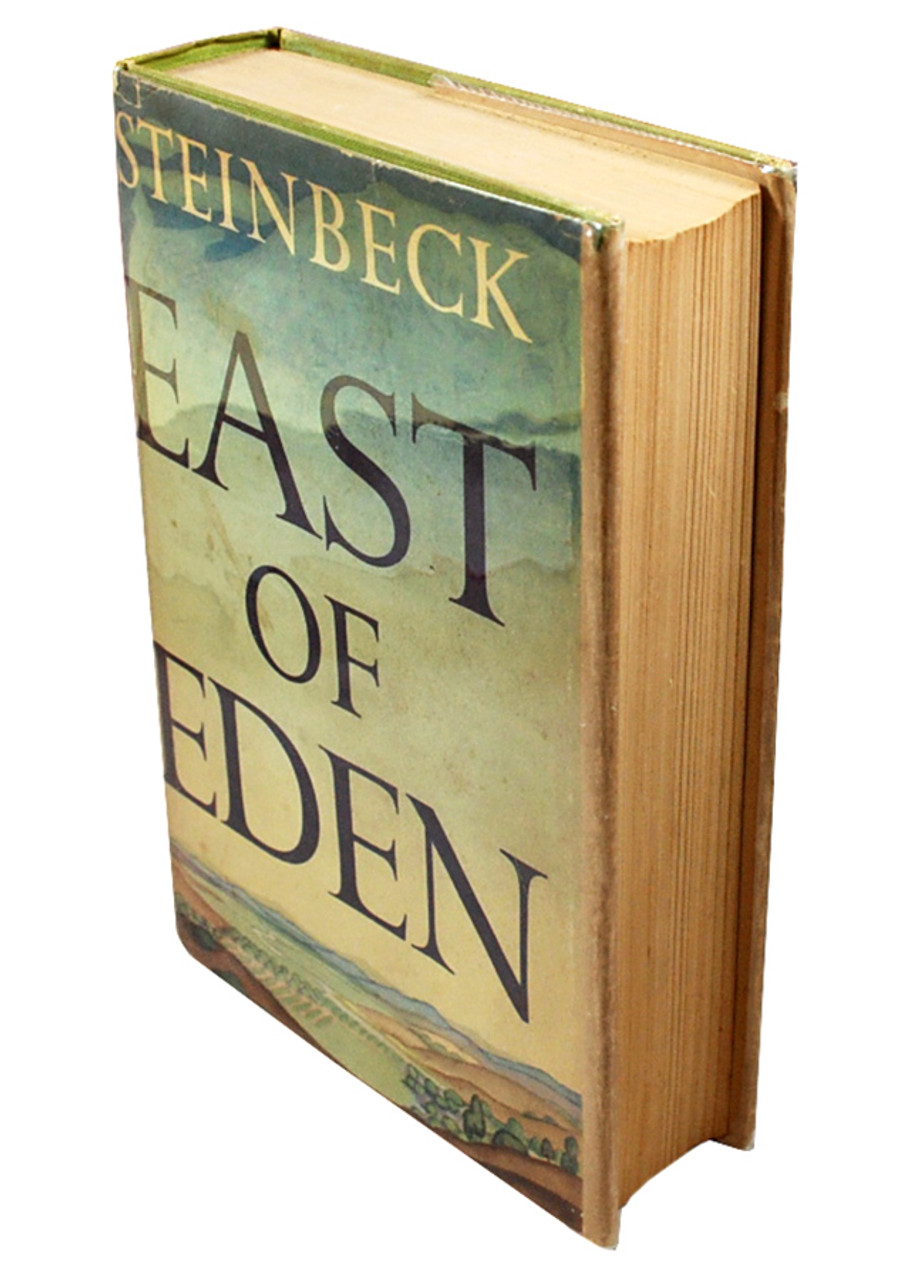 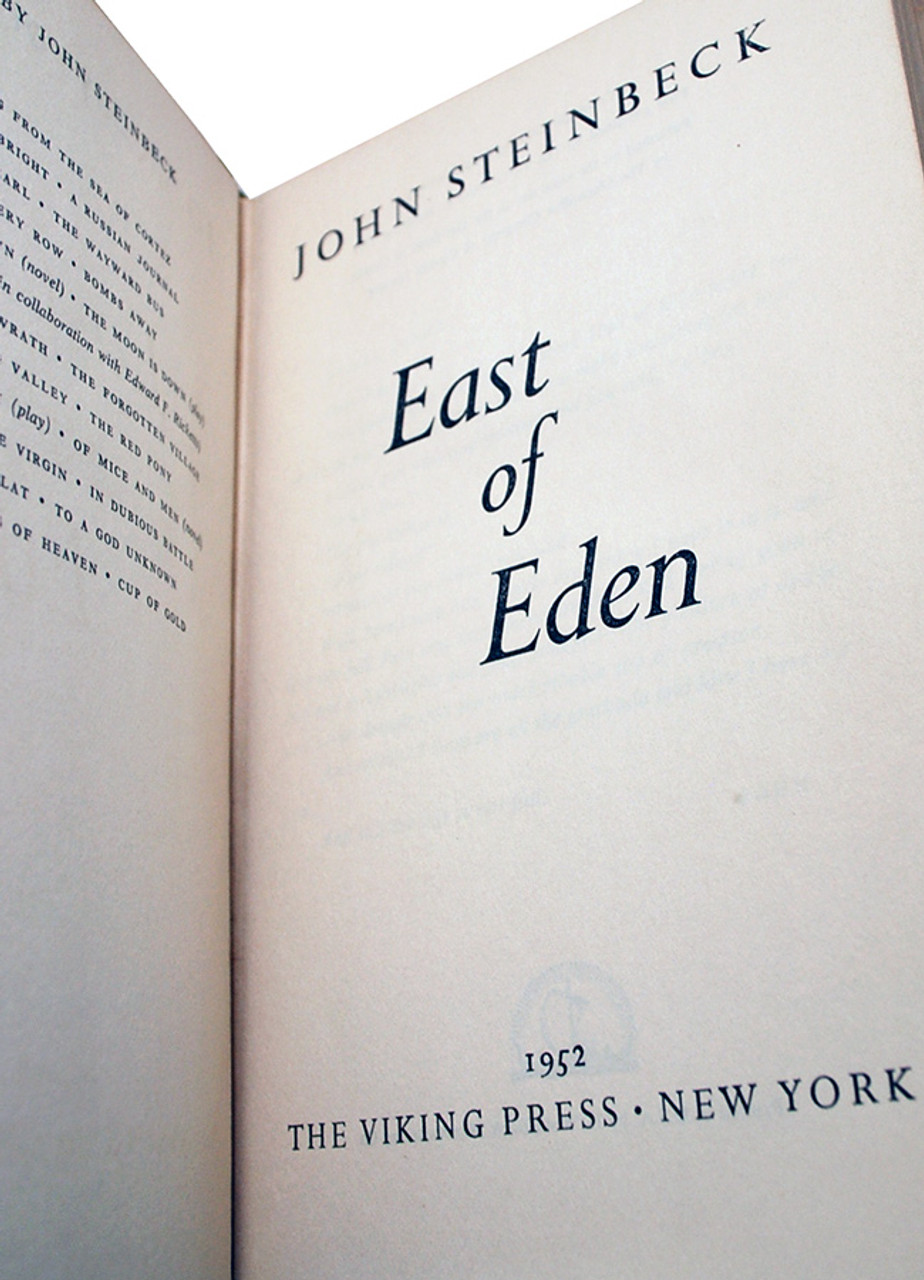 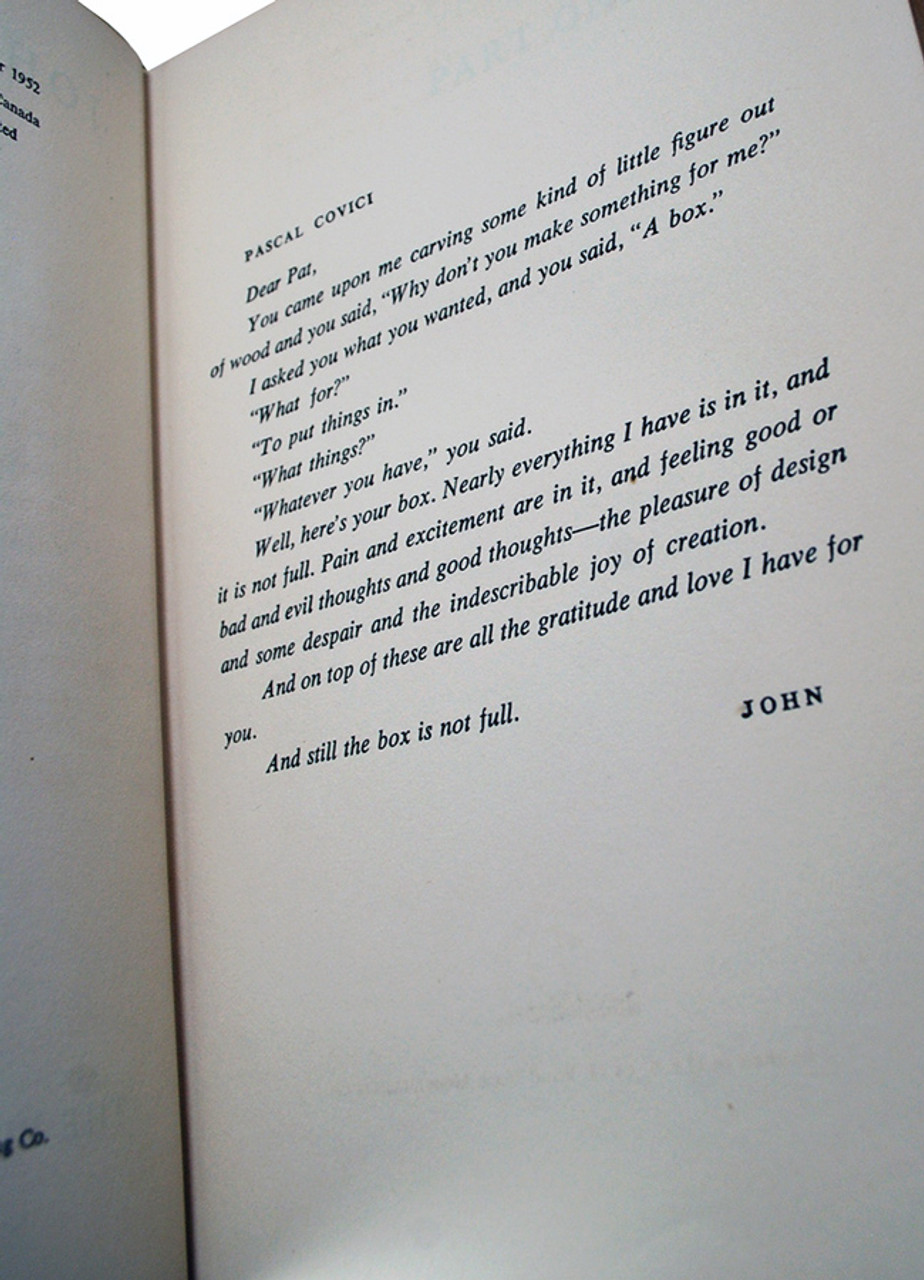 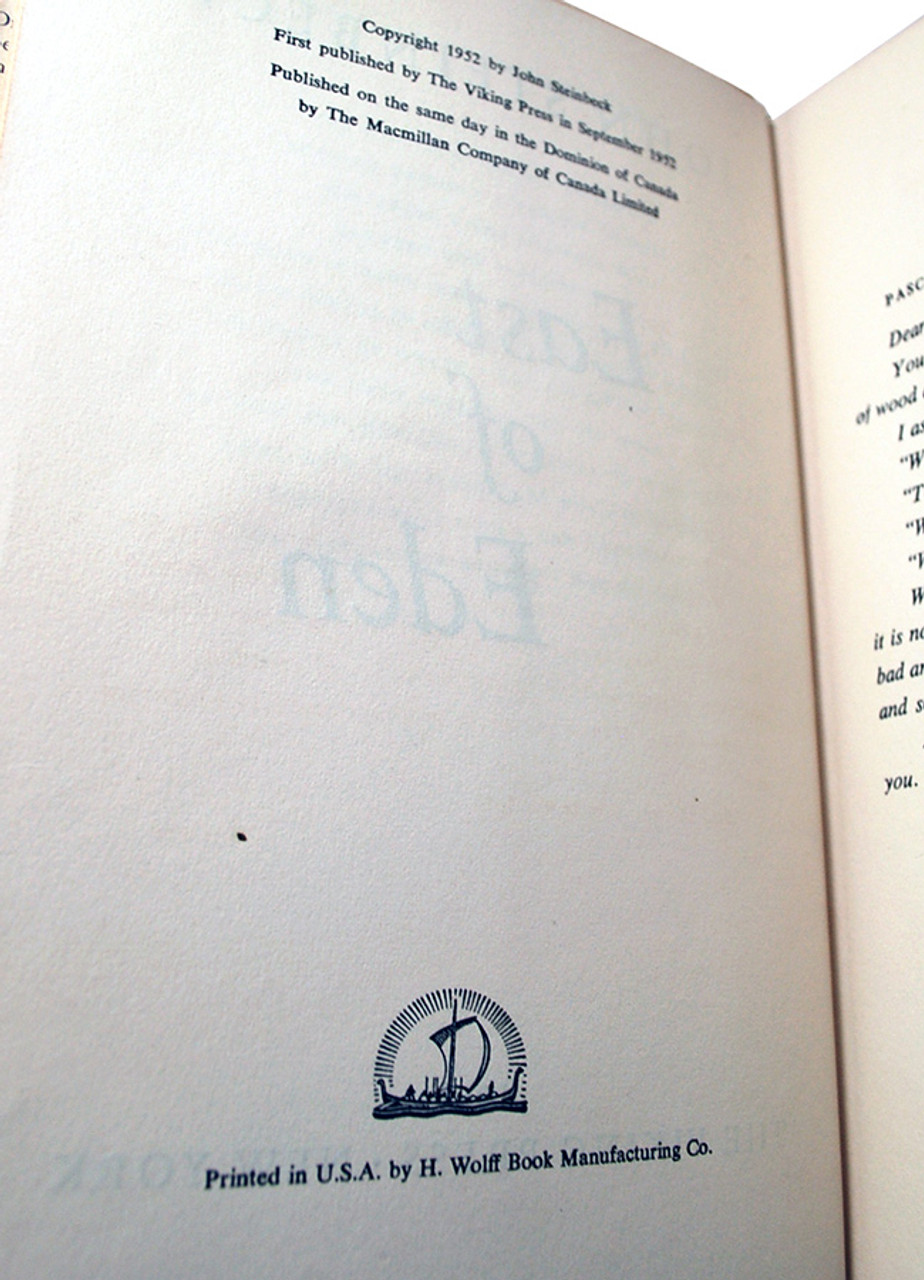 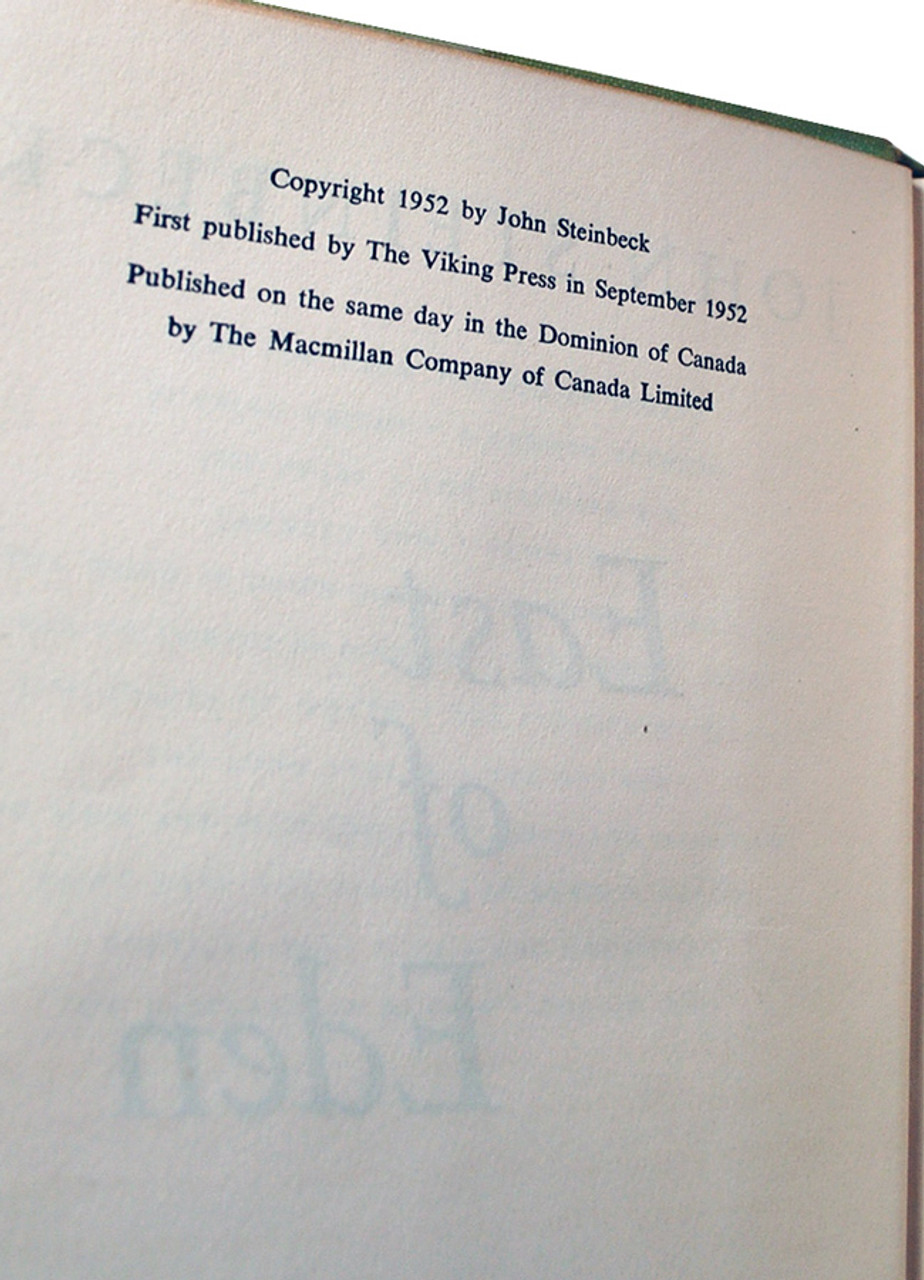 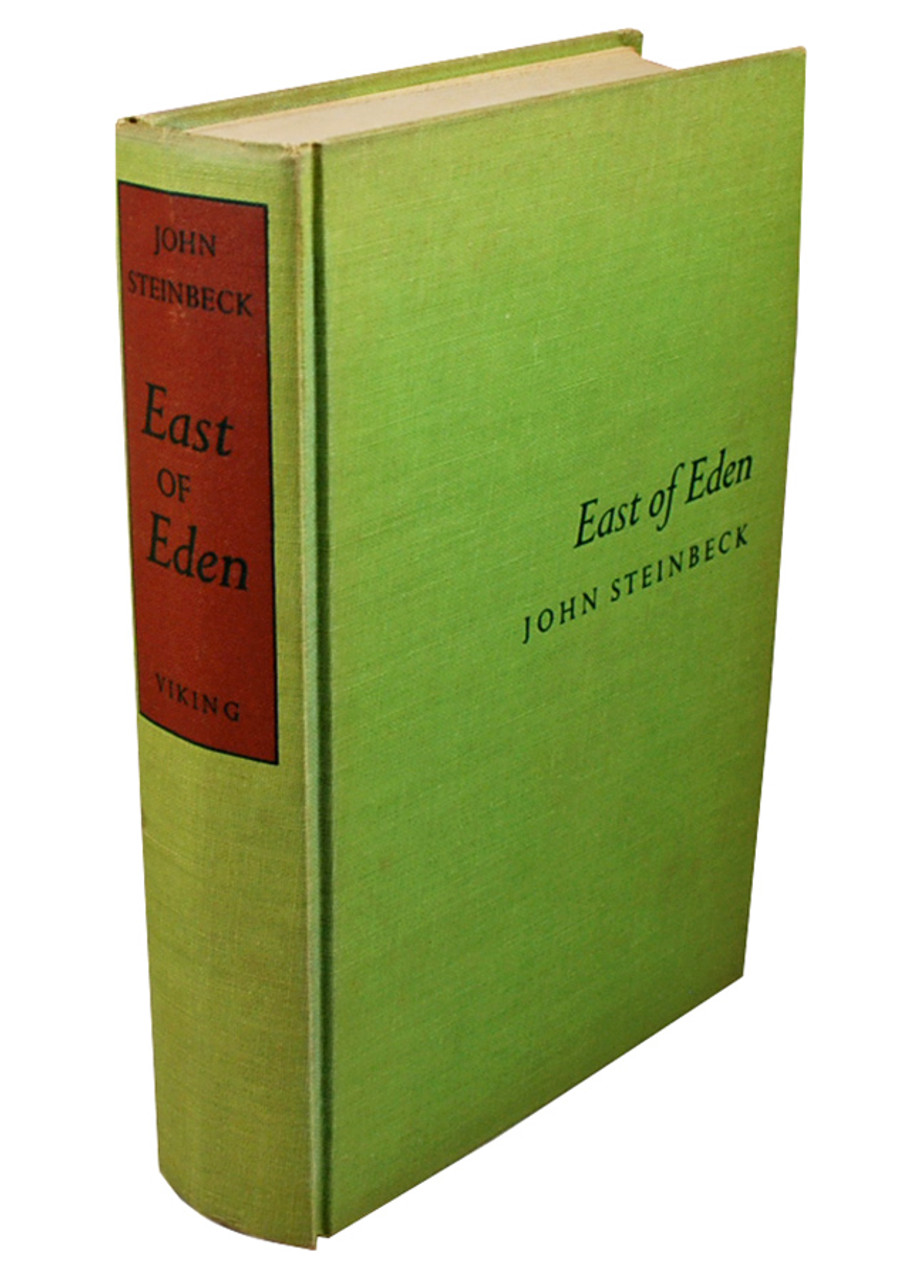 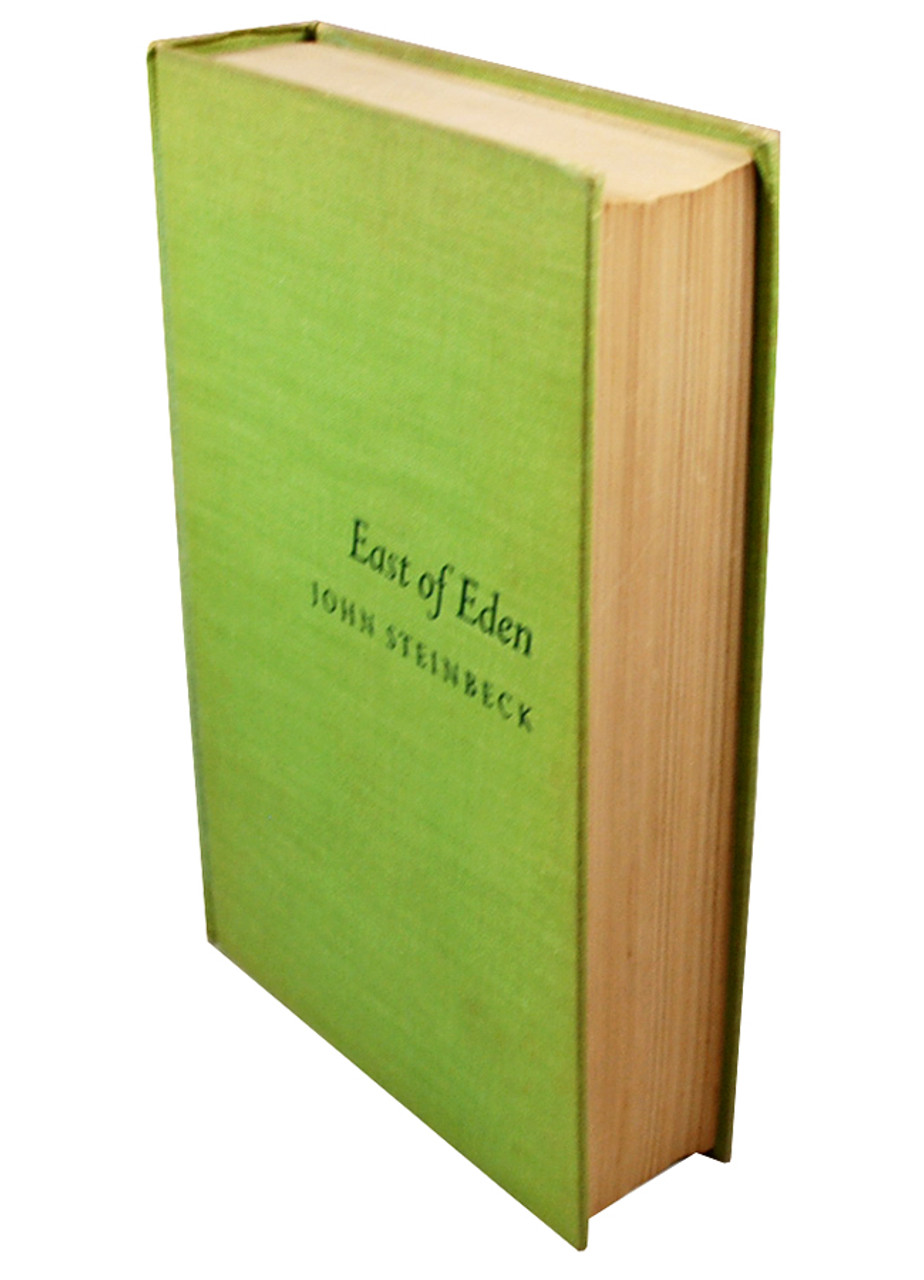 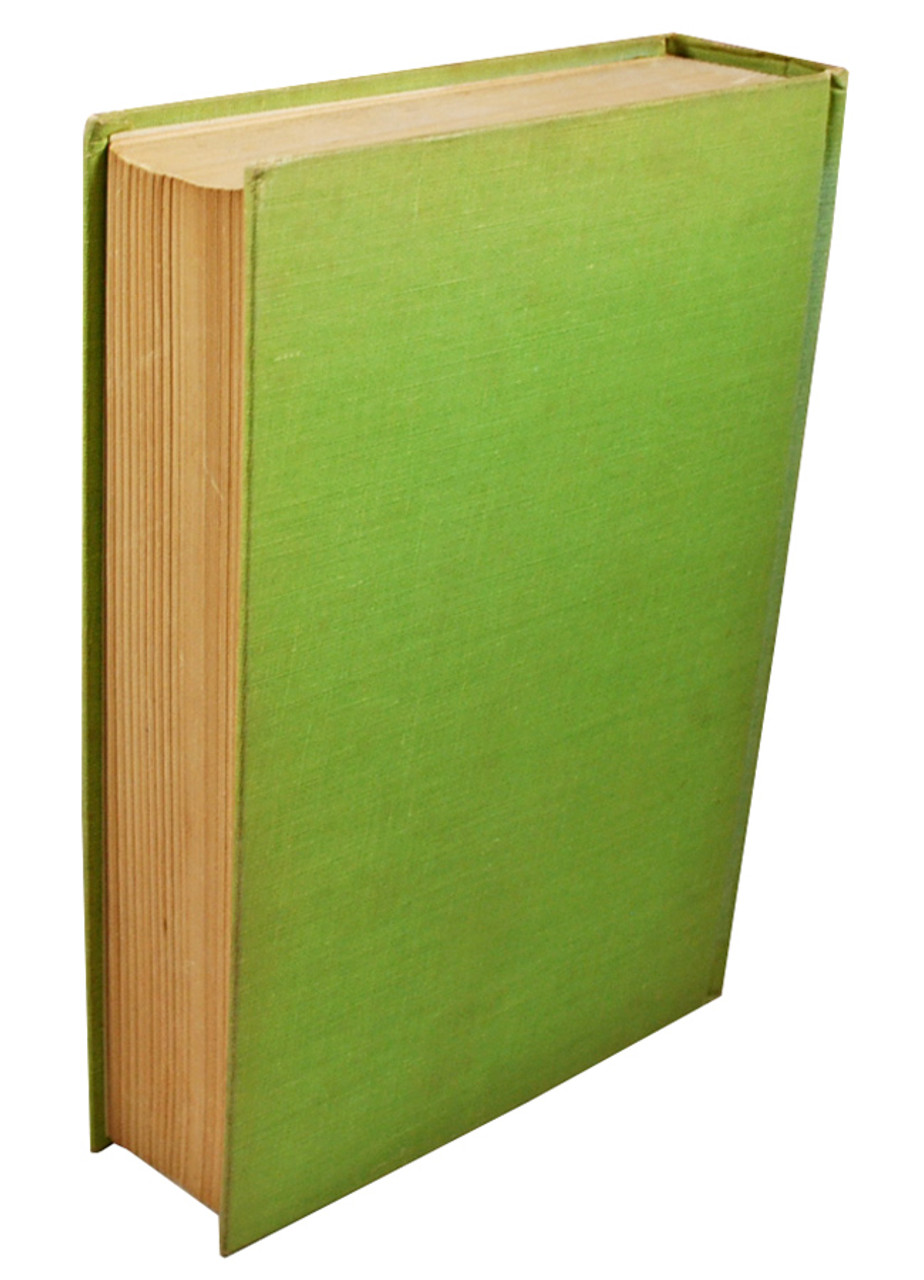 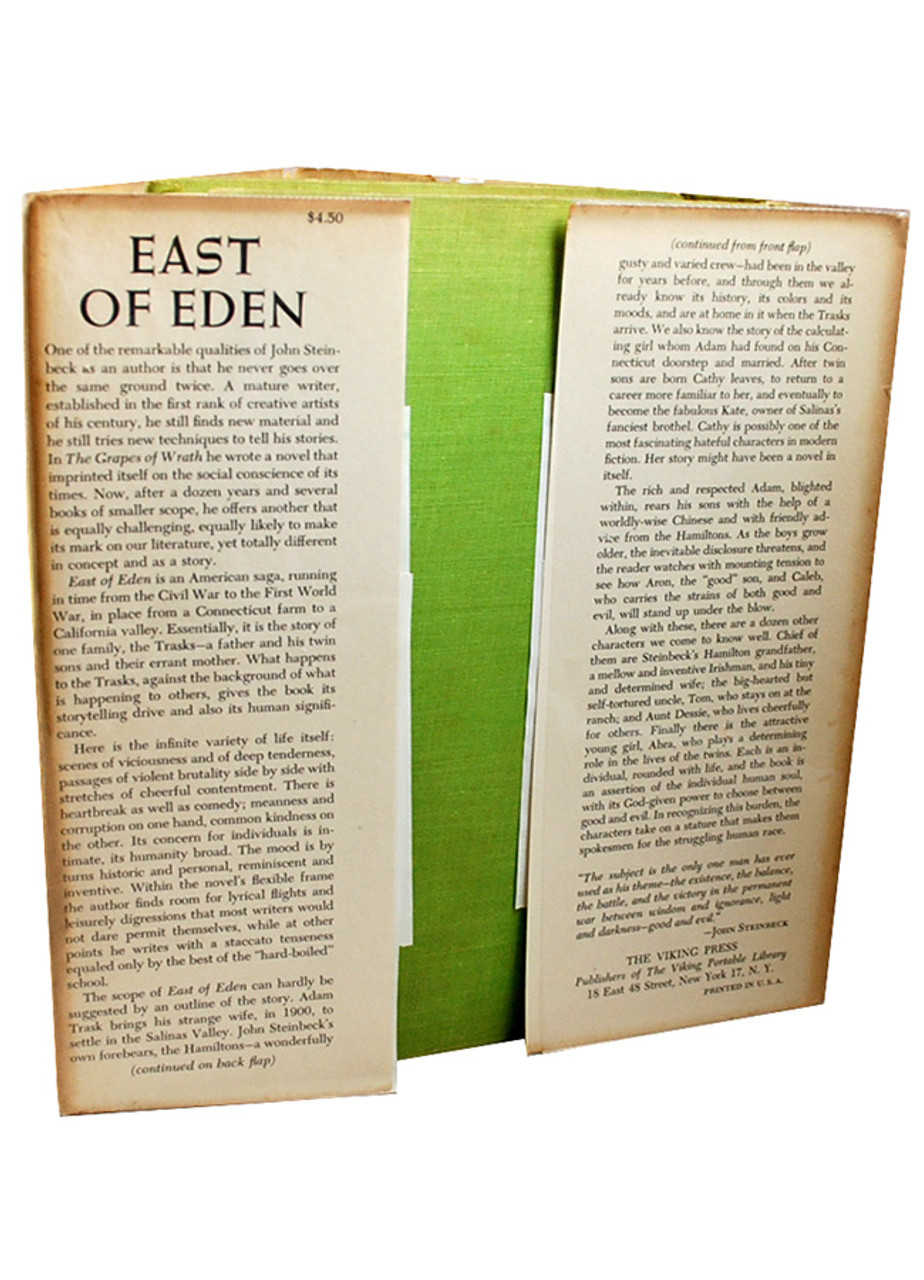 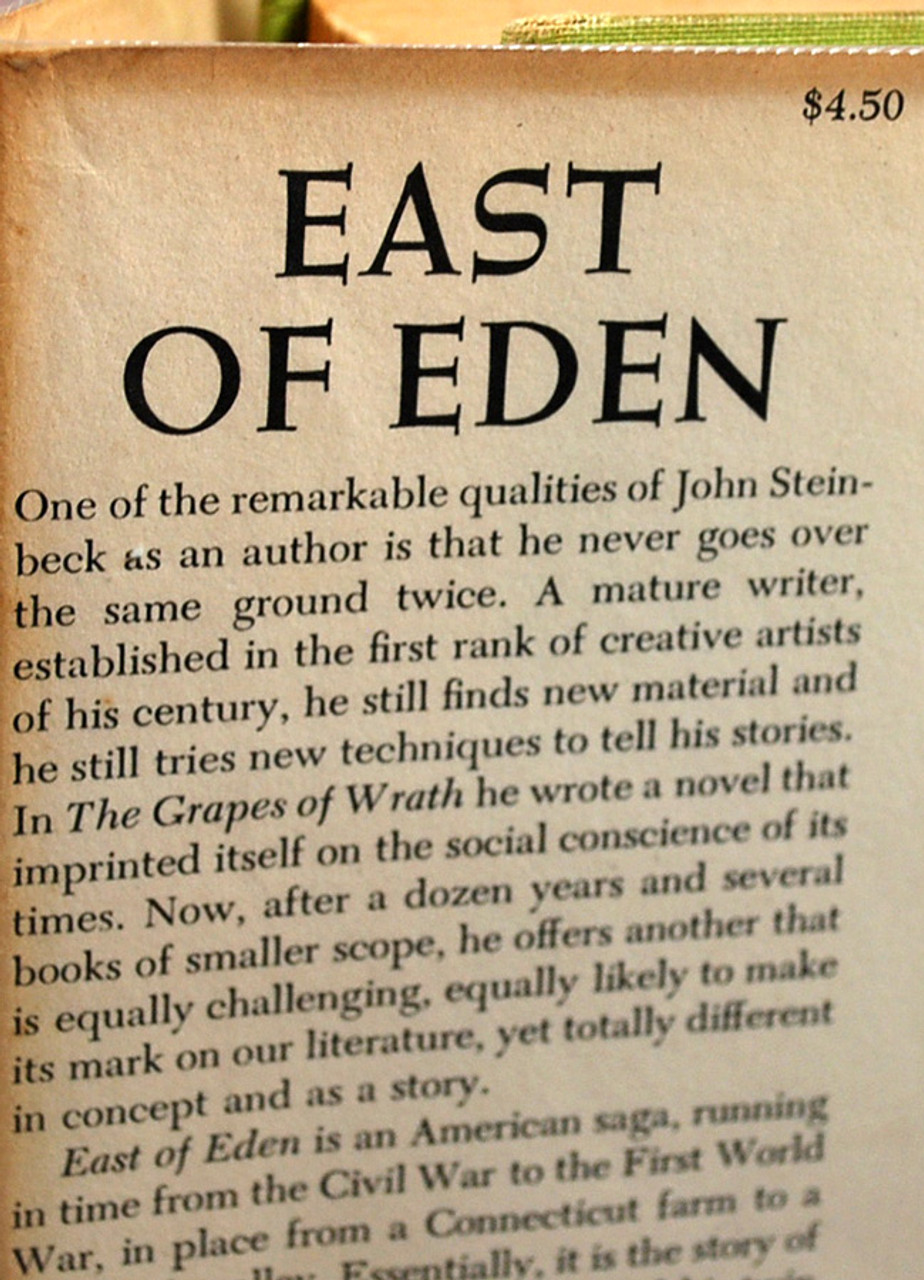 “All great and precious things are lonely.”
― John Steinbeck, East of Eden

In his journal, Nobel Prize winner John Steinbeck called East of Eden “the first book,” and indeed it has the primordial power and simplicity of myth. Set in the rich farmland of California’s Salinas Valley, this sprawling and often brutal novel follows the intertwined destinies of two families—the Trasks and the Hamiltons—whose generations helplessly reenact the fall of Adam and Eve and the poisonous rivalry of Cain and Abel.

Adam Trask came to California from the East to farm and raise his family on the new rich land. But the birth of his twins, Cal and Aaron, brings his wife to the brink of madness, and Adam is left alone to raise his boys to manhood. One boy thrives nurtured by the love of all those around him; the other grows up in loneliness enveloped by a mysterious darkness.

First published in 1952, East of Eden is the work in which Steinbeck created his most mesmerizing characters and explored his most enduring themes: the mystery of identity, the inexplicability of love, and the murderous consequences of love's absence. A masterpiece of Steinbeck's later years, East of Eden is a powerful and vastly ambitious novel that is at once a family saga and a modern retelling of the Book of Genesis. 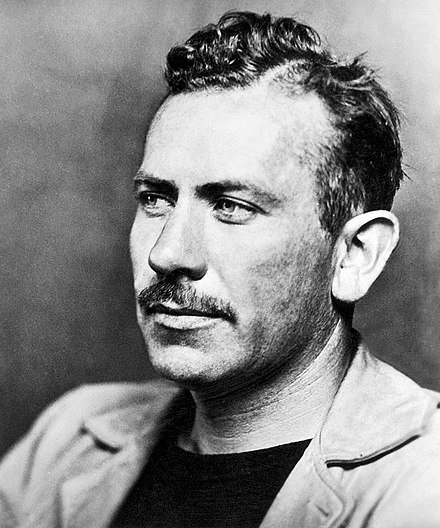 John Ernst Steinbeck Jr. (/ˈstaɪnbɛk/; February 27, 1902 – December 20, 1968) was an American author and the 1962 Nobel Prize in Literature winner "for his realistic and imaginative writings, combining as they do sympathetic humour and keen social perception. He has been called "a giant of American letters, and many of his works are considered classics of Western literature".

During his writing career, he authored 33 books, with one book coauthored alongside Edward Ricketts, including 16 novels, six non-fiction books, and two collections of short stories. He is widely known for the comic novels Tortilla Flat (1935) and Cannery Row (1945), the multi-generation epic East of Eden (1952), and the novellas The Red Pony (1933) and Of Mice and Men (1937). The Pulitzer Prize-winning The Grapes of Wrath (1939) is considered Steinbeck's masterpiece and part of the American literary canon. In the first 75 years after it was published, it sold 14 million copies.

“A novel planned on the grandest possible scale . . . One of those occasions when a writer has aimed high and then summoned every ounce of energy, talent, seriousness, and passion of which he was capable. . . . It is an entirely interesting and impressive book.” —The New York Herald Tribune

“A fantasia and myth . . . A strange and original work of art.” —The New York Times Book Review

“When the book club ended a year ago, I said I would bring it back when I found the book that was moving . . . and this is a great one. I read it for myself for the first time and then I had some friends read it. And we think it might be the best novel we've ever read!” —Oprah Winfrey

Hardcover : Near Fine book with square and tight spine. Tanning to page edges. Clear graphics that are not faded. Free of any marks, writings, or stamps. No bookplates attached or indication of any removed. Sharp corners that are not bumped. Dust-jacket: Near Fine with some chipping to corners as shown. Original price of $4.50 has not been clipped. Short closed tear to back. Original unrestored dust-jacket.

A Luxurious Leather Bound Masterpiece for Your Very Fine LibraryLimited Edition - Collector's Edition. A great unique gift for yourself or for a loved one. Part of prestigious The Collector's Libra