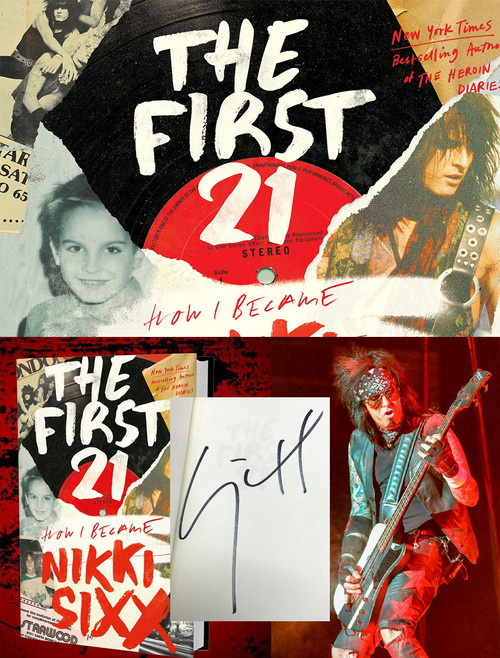 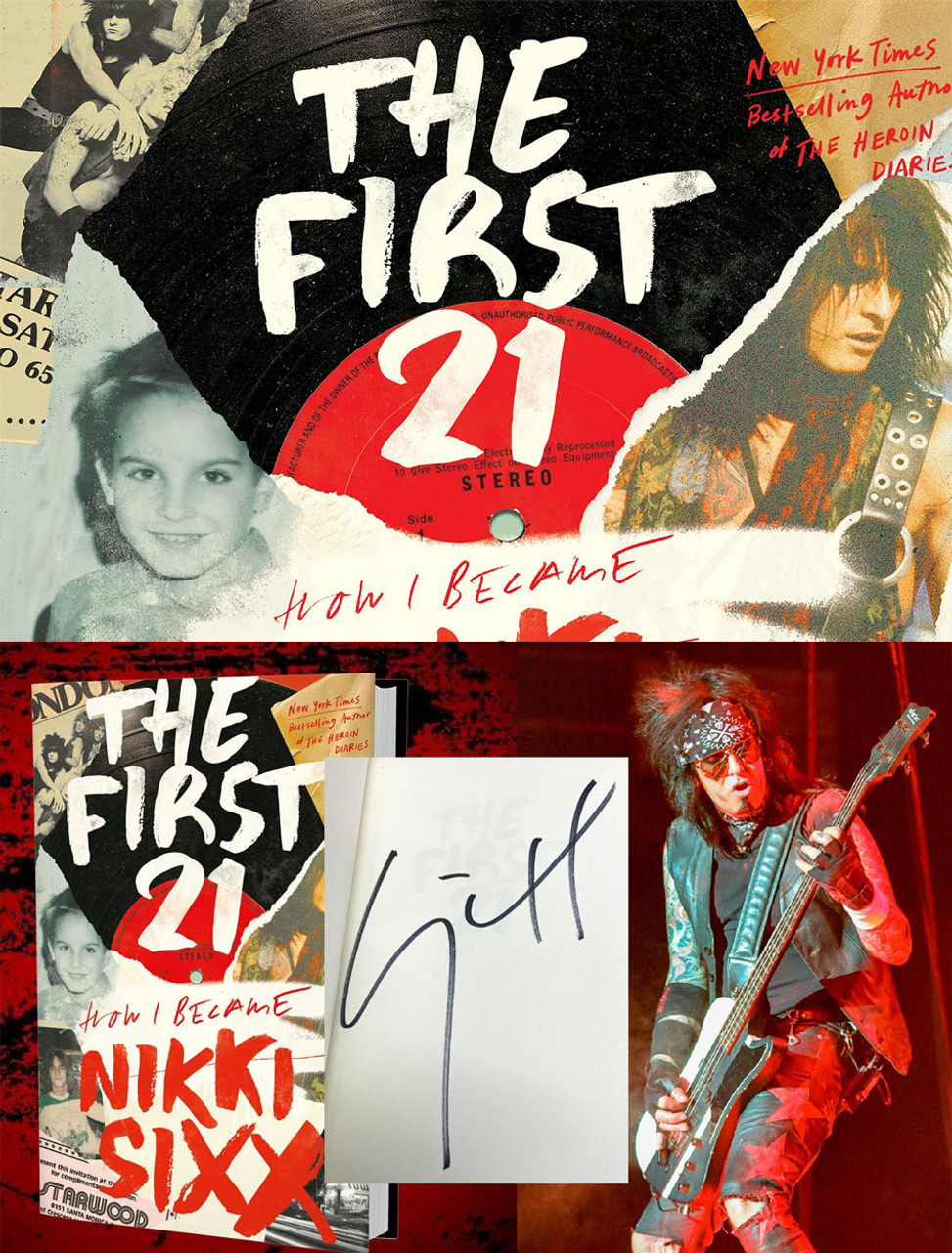 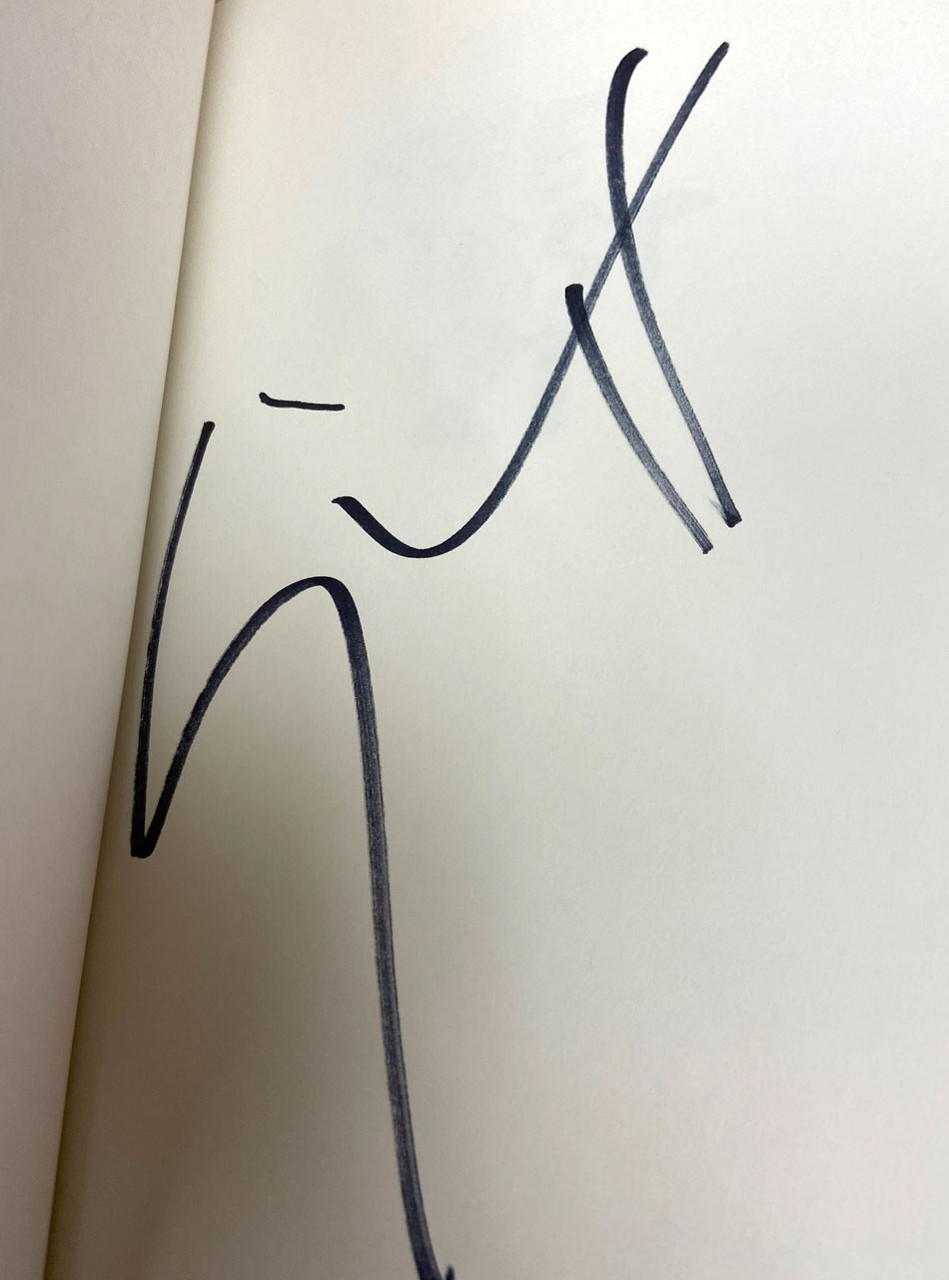 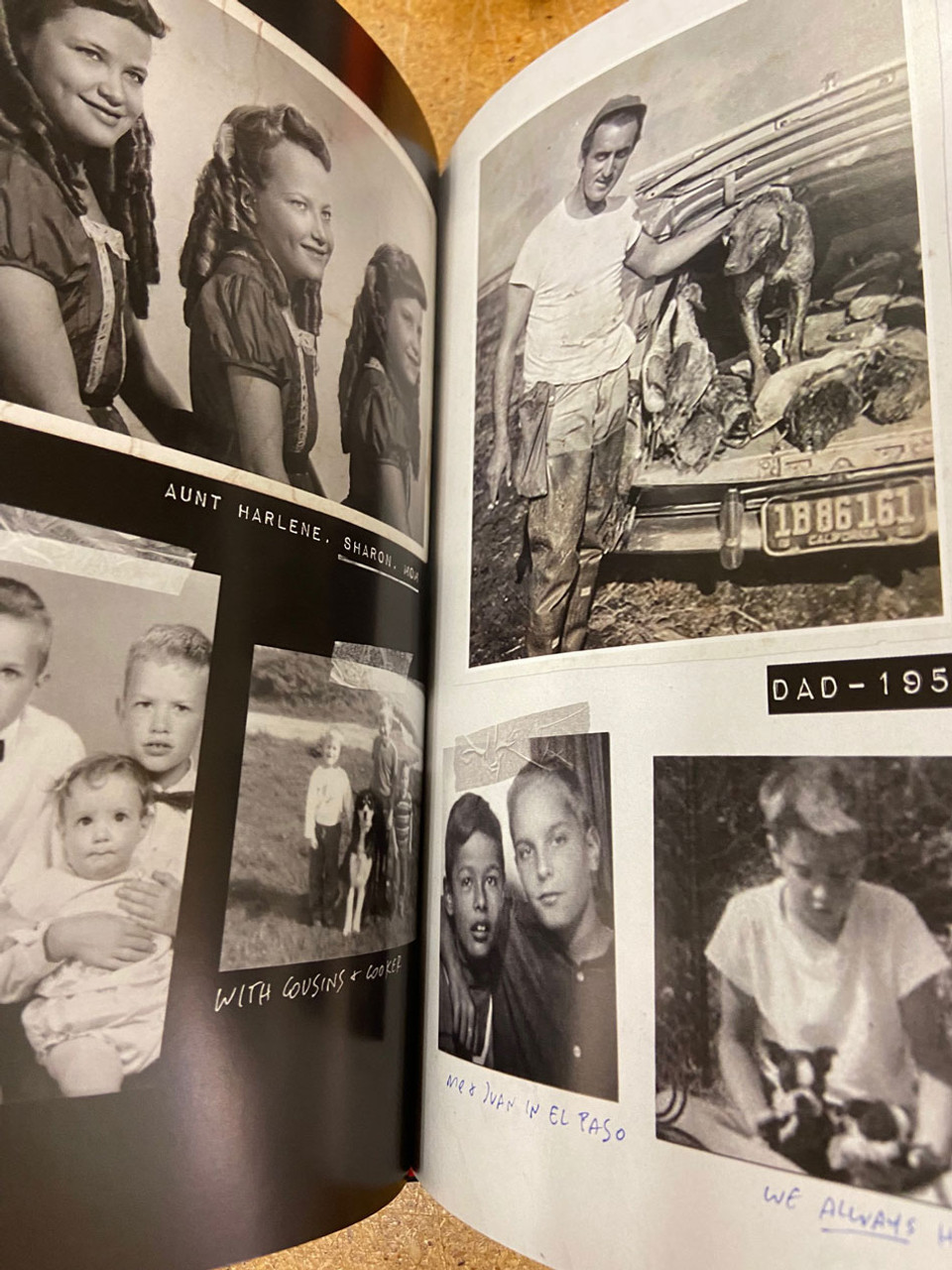 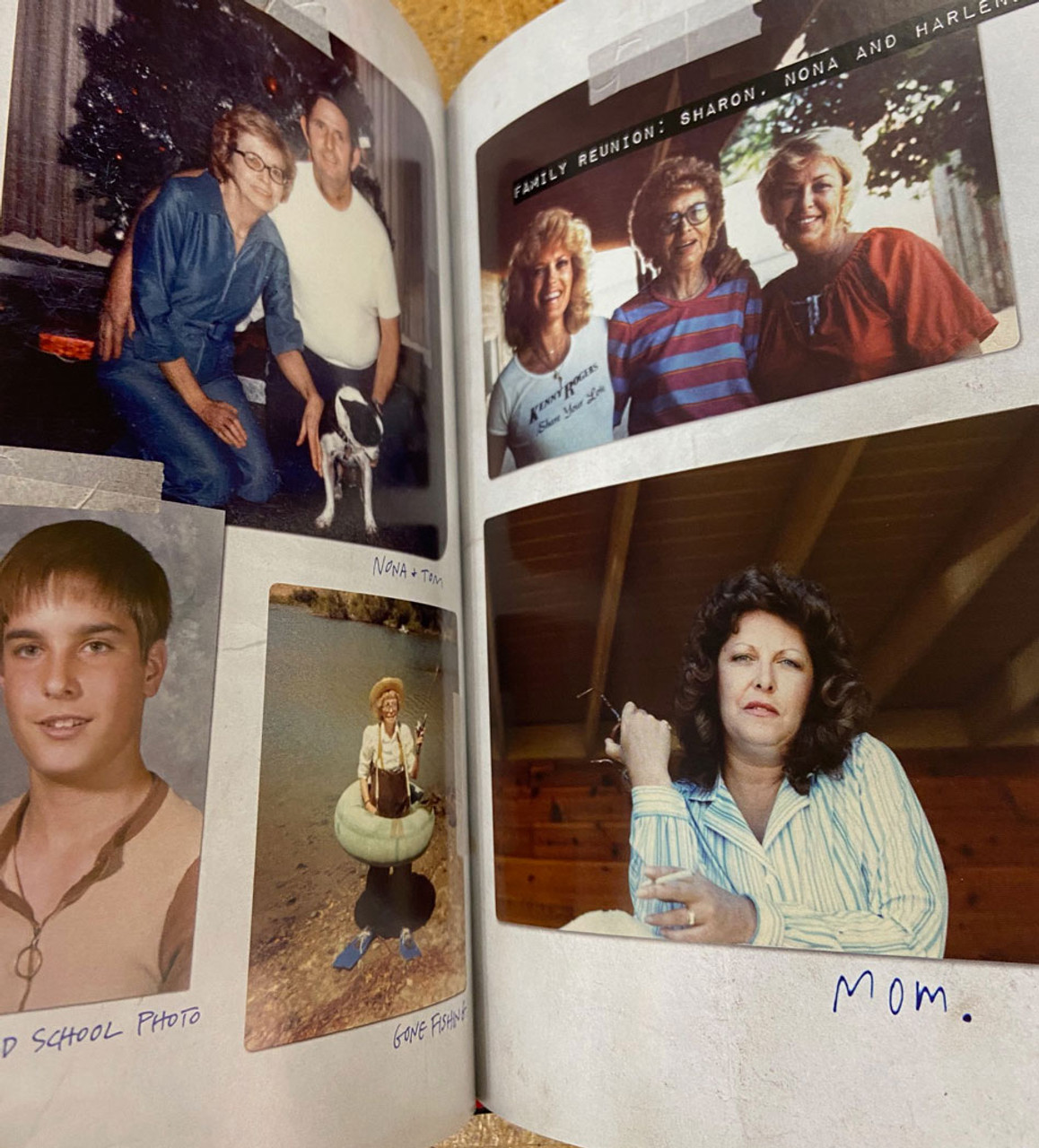 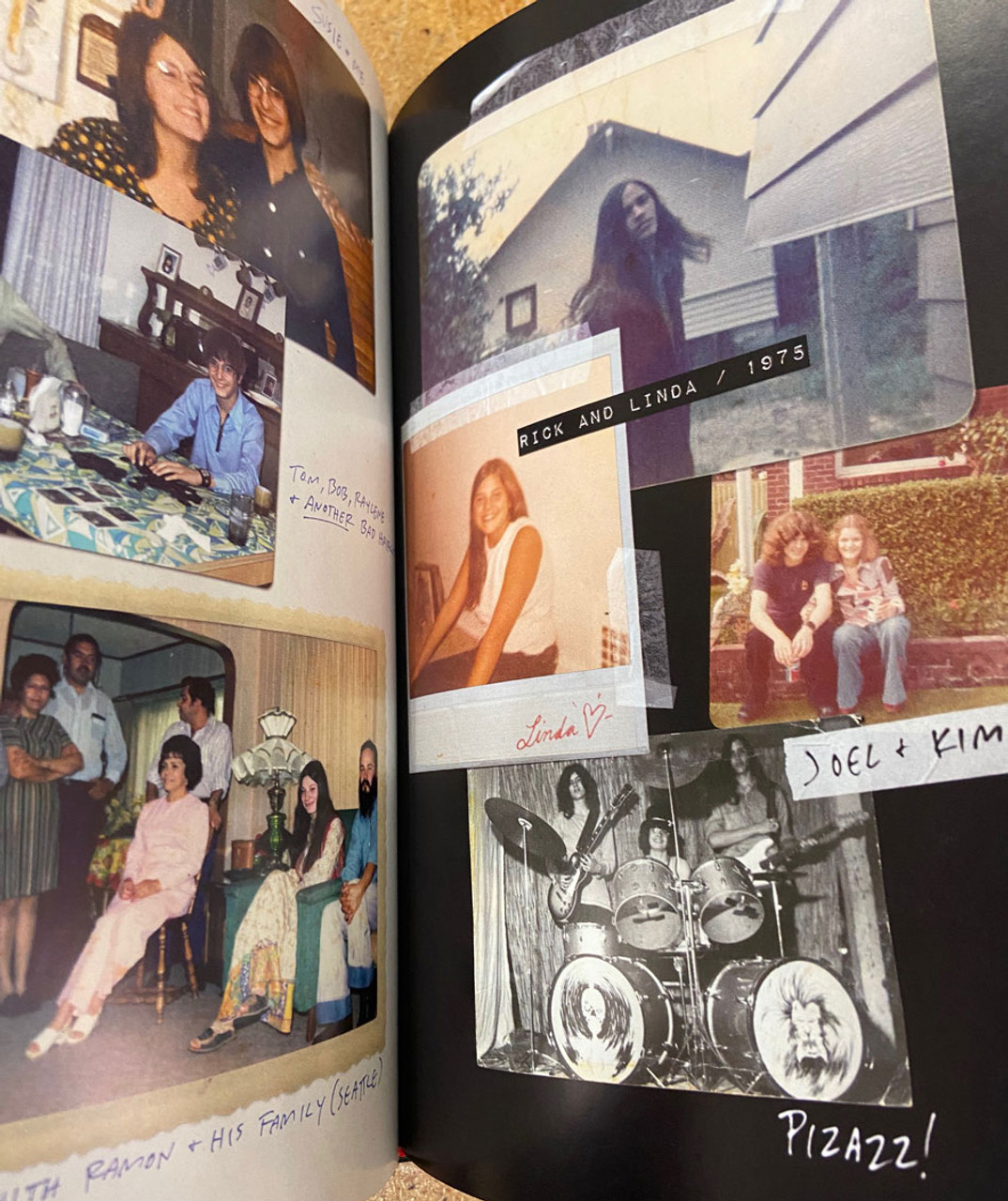 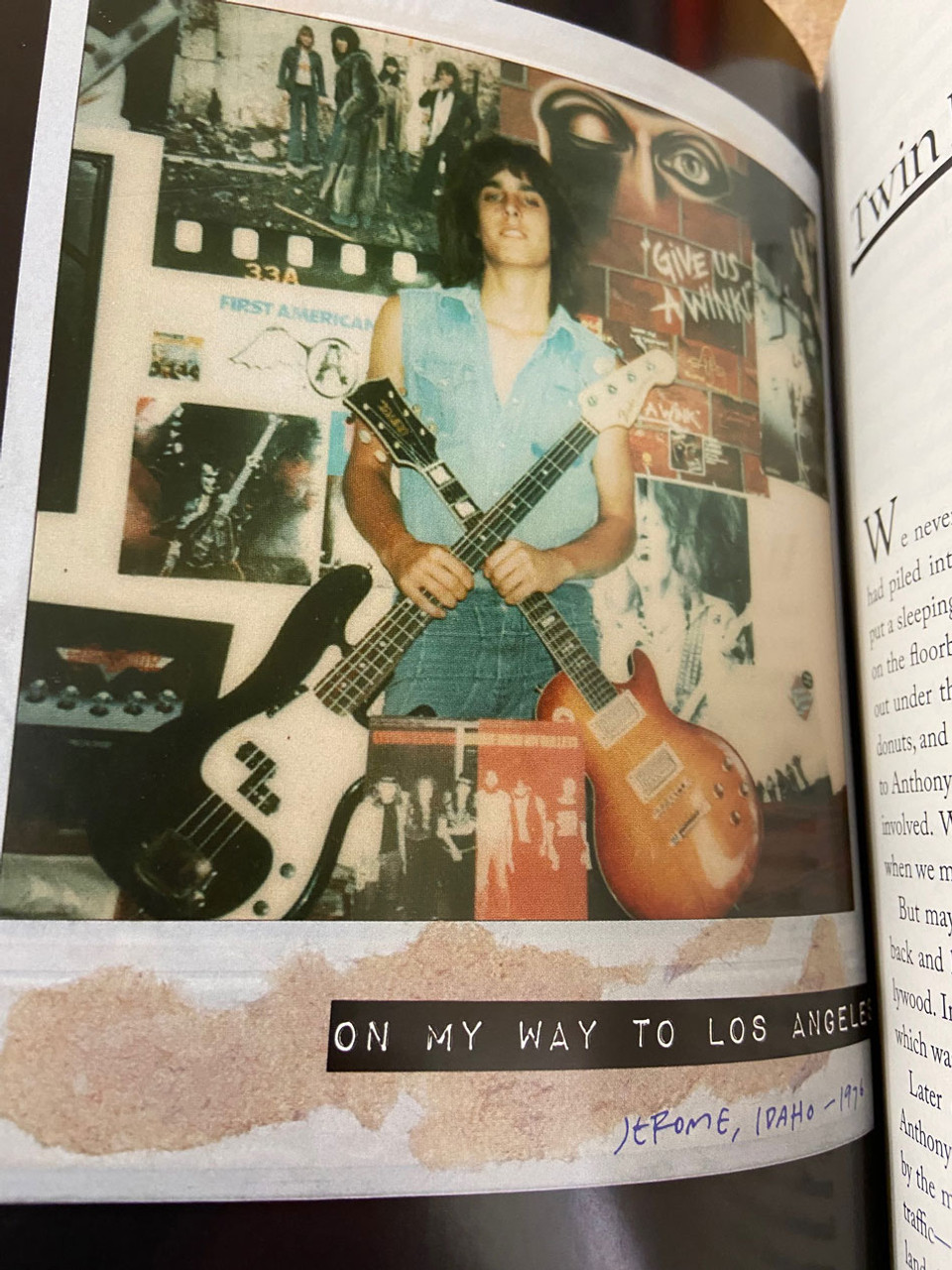 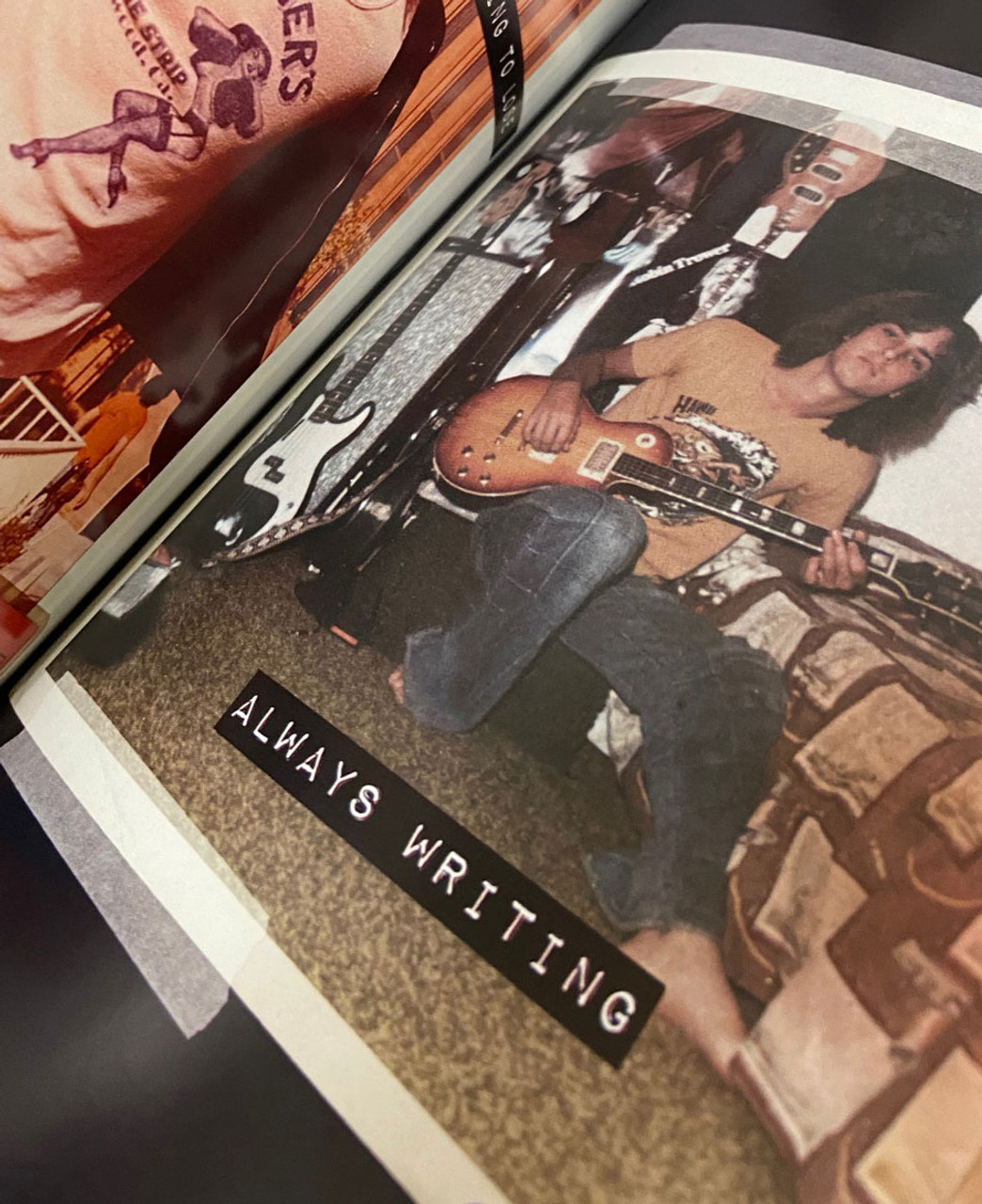 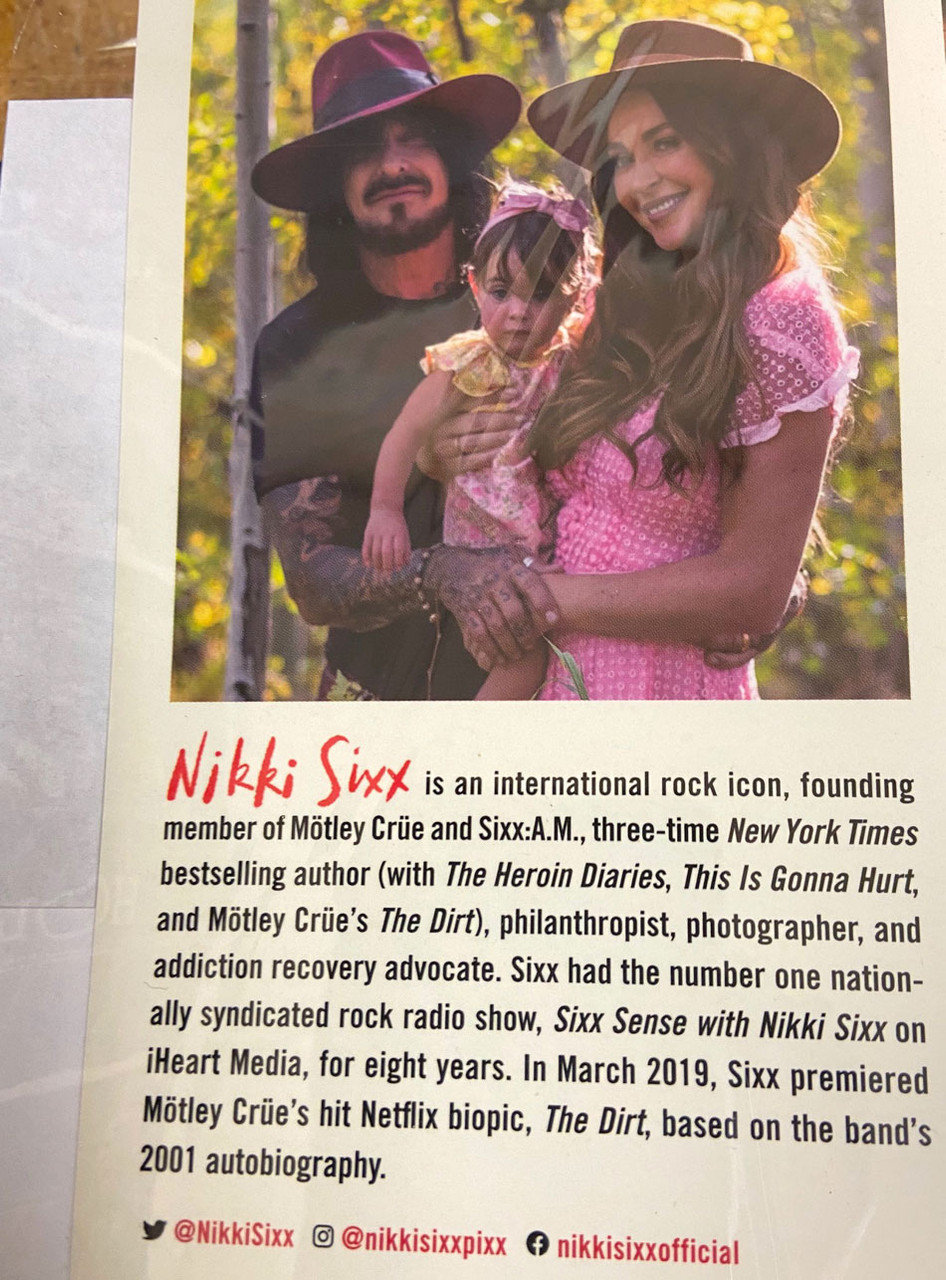 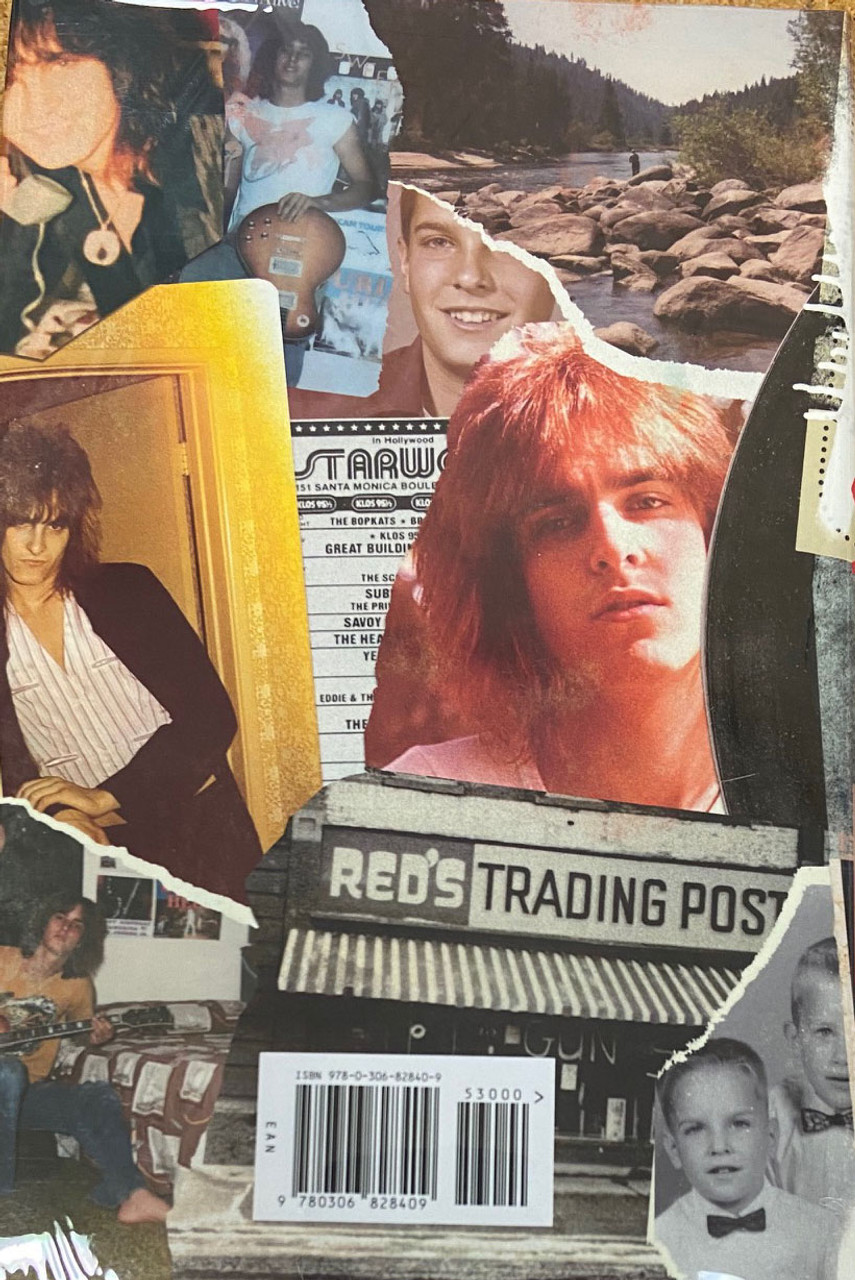 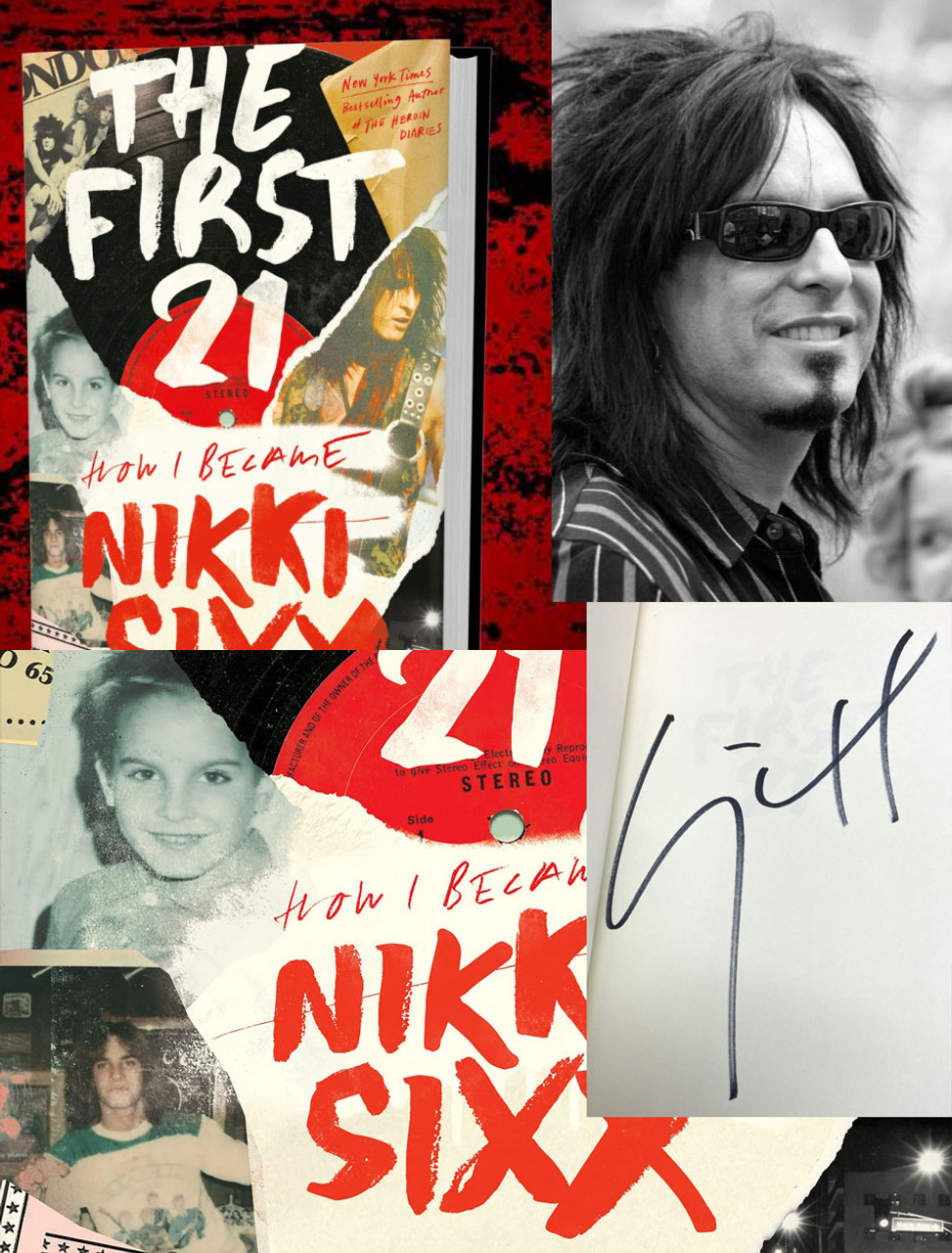 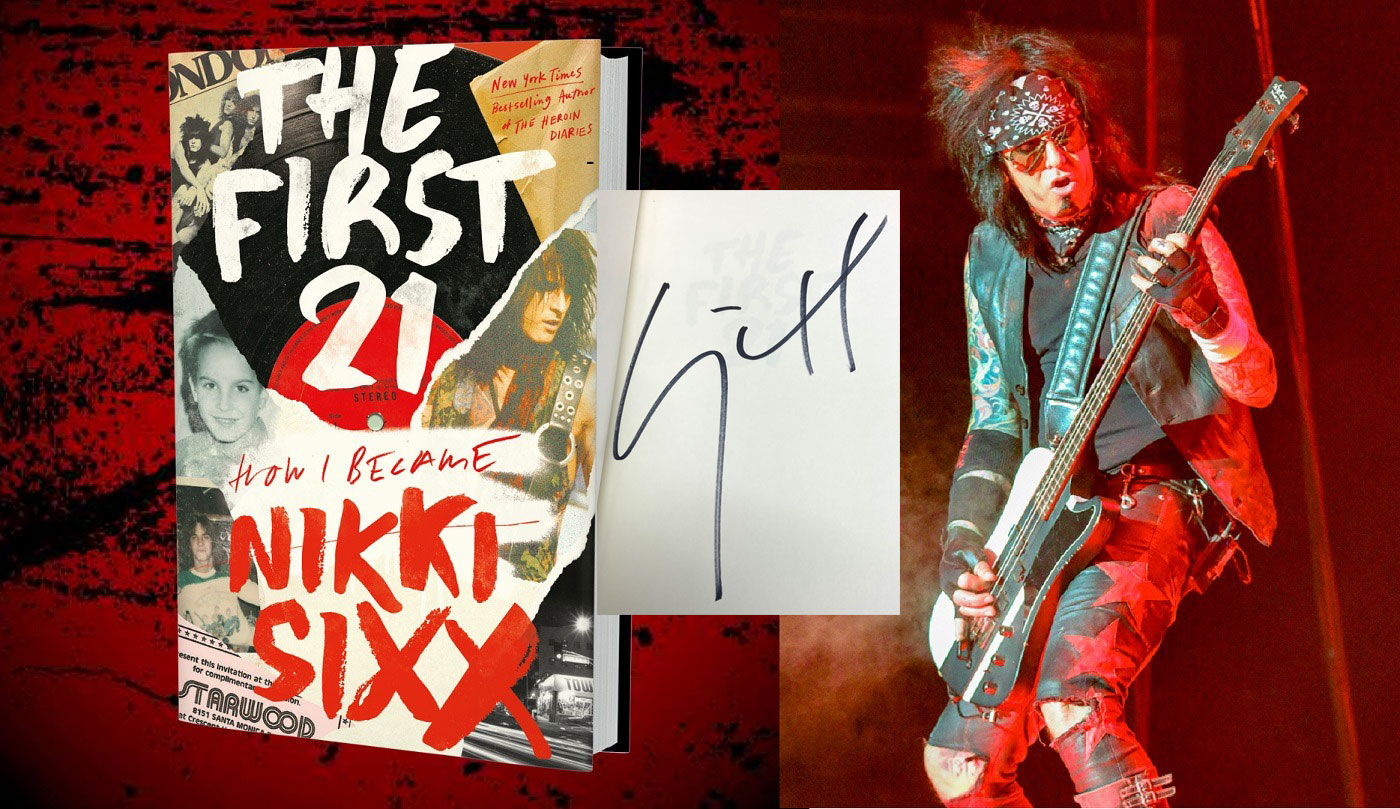 Hachette Books (October 19, 2021). Nikki Sixx "The First 21: How I Became Nikki Sixx". Personally signed by Nikki Sixx. Signed First Edition, First Printing. This is a special slipcased edition of only 21 produced with a hand-numbered COA. The slipcase is produced from high quality materials and design to match the feel and look of the book. As new, sealed without any visible flaws.

You will receive a slip-cased FIRST EDITION, FIRST PRINTING with the the code LSC-C and "Printing 1, 2021" as required on the copyright page by the publisher. "First Edition: October 2021" is also printed. 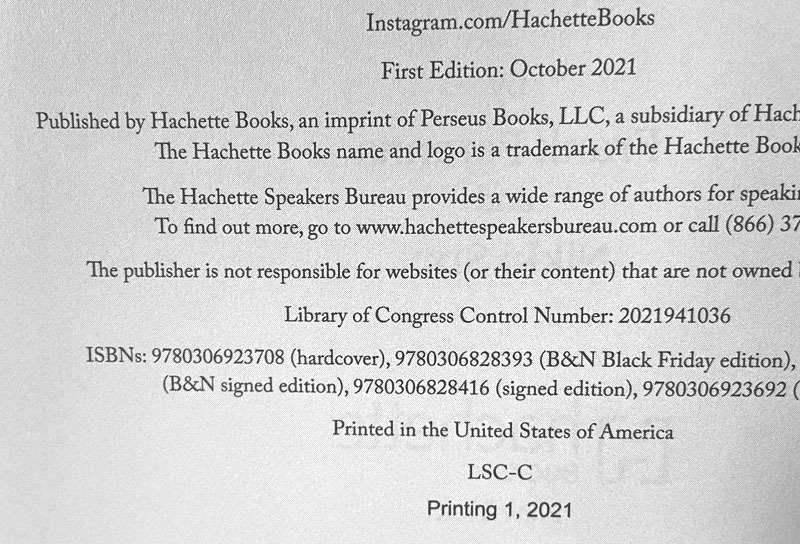 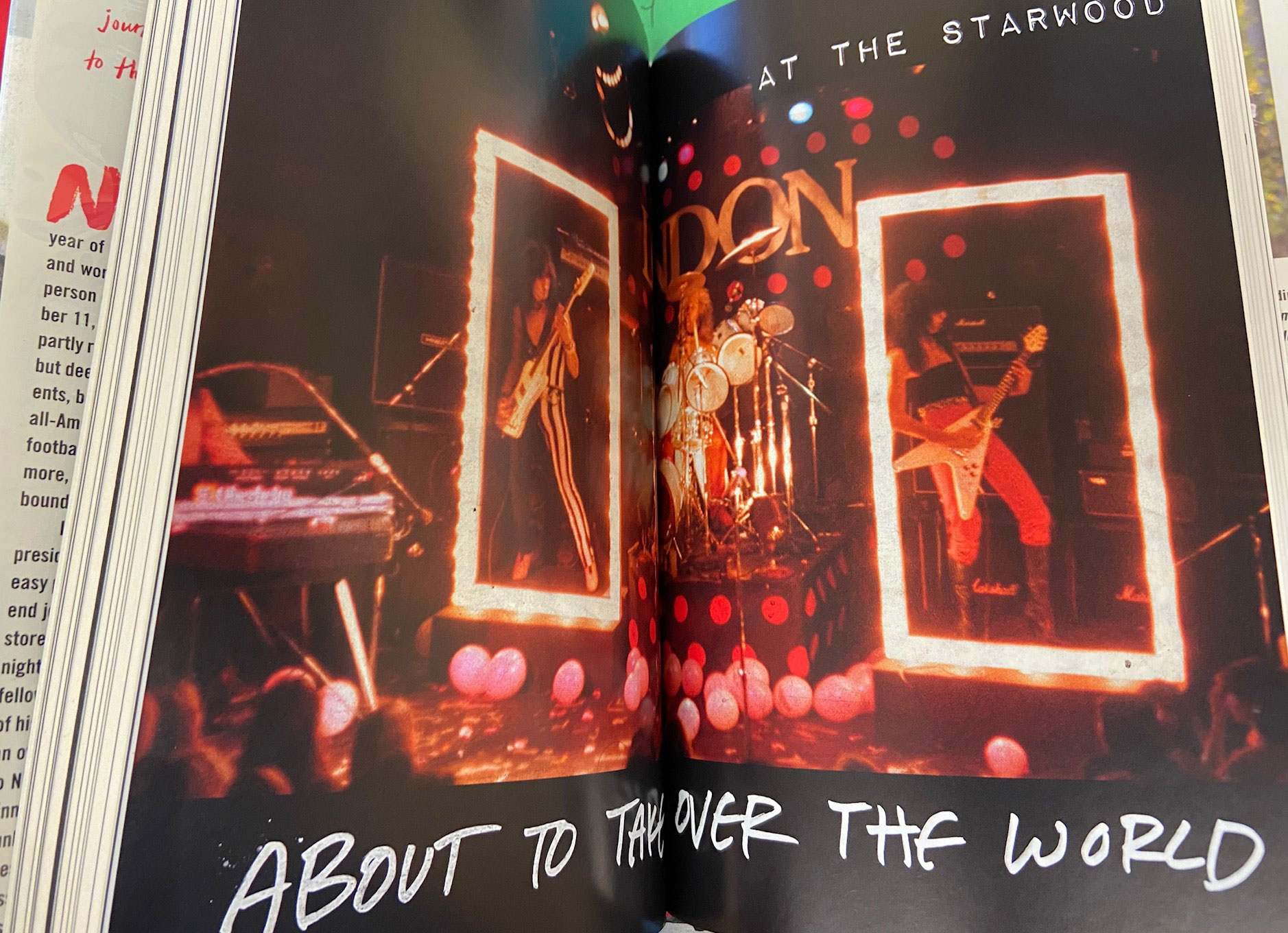 Nikki Sixx is one of the most respected, recognizable, and entrepreneurial icons in the music industry. As the founder of Mötley Crüe, who is now in his twenty-first year of sobriety, Sixx is incredibly passionate about his craft and wonderfully open about his life in rock and roll, and as a person of the world. Born Franklin Carlton Feranna on December 11, 1958, young Frankie was abandoned by his father and partly raised by his mother, a woman who was ahead of her time but deeply troubled. Frankie ended up living with his grandparents, bouncing from farm to farm and state to state. He was an all-American kid—hunting, fishing, chasing girls, and playing football—but underneath it all, there was a burning desire for more, and that more was music. He eventually took a Greyhound bound for Hollywood.

In Los Angeles, Frank lived with his aunt and his uncle—the president of Capitol Records—for a short time. But there was no easy path to the top. He was soon on his own. There were dead-end jobs: dipping circuit boards, clerking at liquor and record stores, selling used light bulbs, and hustling to survive. But at night, Frank honed his craft, joining Sister, a band formed by fellow hard-rock veteran Blackie Lawless, and formed a group of his own: London, the precursor of Mötley Crüe. Turning down an offer to join Randy Rhoads’s band, Frank changed his name to Nikki London, Nikki Nine, and, finally, Nikki Sixx. Like Huck Finn with a stolen guitar, he had a vision: a group that combined punk, glam, and hard rock into the biggest, most theatrical and irresistible package the world had ever seen. With hard work, passion, and some luck, the vision manifested in reality—and this is a profound true story finding identity, of how Frank Feranna became Nikki Sixx. It’s also a road map to the ways you can overcome anything, and achieve all of your goals, if only you put your mind to it.

Nikki Sixx (born Frank Carlton Serafino Feranna Jr.; December 11, 1958) is an American musician who is the co-founder, bassist, and primary songwriter of the rock band Mötley Crüe. Prior to forming Mötley Crüe, Sixx was a member of Sister before going on to form London[1] with his Sister bandmate Lizzie Grey. In 2000, he formed side project group 58 with Dave Darling, Steve Gibb and Bucket Baker issuing one album, Diet for a New America, the same year while, in 2002, he formed the hard rock supergroup Brides of Destruction with L.A. Guns guitarist Tracii Guns. Formed in 2006, initially to record an audio accompaniment to Sixx's autobiography The Heroin Diaries: A Year in the Life of a Shattered Rock Star, his side band Sixx:A.M. features songwriter, producer, and vocalist James Michael and guitarist DJ Ashba.

Sixx has also worked with a number of artists and groups, co-writing and/or producing songs, such as Sex Pistols's guitarist Steve Jones, Lita Ford, Alice Cooper, Meat Loaf, Marion Raven, Drowning Pool, Saliva and The Last Vegas, among others.

Sixx launched the clothing line "Royal Underground" in 2006 with Kelly Gray, formerly the co-president and house model of St. John. Initially the label concentrated on men's clothing[12] before expanding into women's while in 2010, Premiere Radio Networks launched nationally syndicated Rock/alternative music radio programs "Sixx Sense" and "The Side Show Countdown" with both based in Dallas, Texas and hosted by Sixx and co-hosted by Jenn Marino. 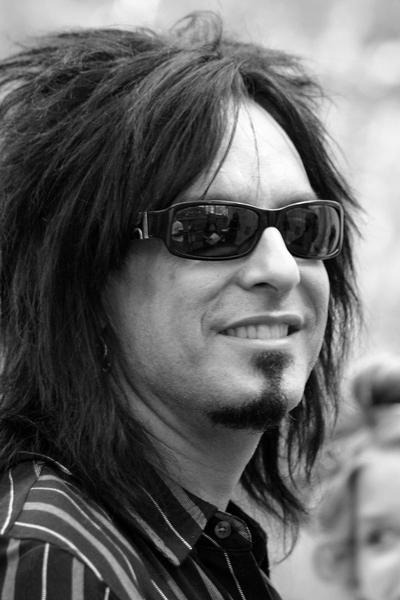 "[Nikki] writes it in a way where the reader feels like they're there."―Dr. Phil

"This book is so exciting...I love the backstory of [Nikki's] life...What a great book."―Matt Pinfield, "New & Approved"

“A deeply personal plunge into Sixx’s dysfunctional upbringing….The journey from Feranna to Sixx – a name he maybe, sort of stole from another local musician who had dubbed himself Niki Syxx – is a fraught and complicated one. But it’s a story that Sixx shares with humor and honesty."―USA Today

“ Amazing... The First 21: How I Became Nikki Sixx is the origin story many have been waiting for…. There are many poignant moments and stunning revelations. You’ll learn how he went from sweeping floors to selling out shows at The Starwood, the artists and authors who inspired him, the meaning behind the trademark black lines he wears onstage, how he ripped off everything from Johnny Thunders’ look to the name Nikki Sixx, and how James Caan almost lassoed him poolside. However, his determination to succeed is the real story.”―The Aquarian

“[The First 21] explores how [Nikki Sixx’s] hand-to-mouth upbringing made him hungry to see his rock-band dreams come to fruition…thoughtful glimpses into the backstory of a very determined musician.”―Kirkus Reviews

“[Nikki Sixx] follows his searing memoir, The Heroin Diaries, with an equally exhilarating look at the first 21 years of his life… Fans will relish this passionate look at the man behind the hair.“
―Publishers Weekly

Mötley Crüe is an American heavy metal band formed in Los Angeles in 1981. The group was founded by bassist Nikki Sixx, drummer Tommy Lee, lead guitarist Mick Mars and lead singer Vince Neil. Mötley Crüe has sold over 100 million albums worldwide. They have also achieved seven platinum or multi-platinum certifications, nine Top 10 albums on the Billboard 200 chart (including 1989's Dr. Feelgood, which is Mötley Crüe's only album to reach number one), twenty-two Top 40 mainstream rock hits, and six Top 20 pop singles. The band experienced several short-term lineup changes in the 1990s and 2000s; these included the introduction of vocalist John Corabi (who was Neil's replacement from 1992 to 1996) and drummers Randy Castillo and Samantha Maloney, both of whom filled in for Lee following his departure from Mötley Crüe in 1999; he returned to the band in 2004.

The members of Mötley Crüe have often been noted for their hedonistic lifestyles and the androgynous personae they maintained. Following the hard rock and heavy metal origins on the band's first two albums, Too Fast for Love (1981) and Shout at the Devil (1983), the release of its third album Theatre of Pain (1985) saw Mötley Crüe joining the first wave of glam metal. The band has also been known for their elaborate live performances, which feature flame thrower guitars, roller coaster drum kits, and heavy use of pyrotechnics (including lighting Nikki on fire). Mötley Crüe's most recent studio album, Saints of Los Angeles, was released on June 24, 2008. What was planned to be the band's final show took place on New Year's Eve, December 31, 2015. The concert was filmed for a theatrical and Blu-ray release in 2016.

After two-and-a-half years of inactivity, Neil announced in September 2018 that Mötley Crüe had reunited and was working on new material. On March 22, 2019, the band released four new songs on the soundtrack for its Netflix biopic The Dirt, based on the band's New York Times best-selling autobiography. The soundtrack went to number one on the iTunes All Genres Album Chart, number 3 on the Billboard Top Album and Digital Album sales charts, number 10 on the Billboard 200, and Top 10 worldwide. The autobiography returned to New York Times Best Seller list at number 6 on Nonfiction Print and number 8 on Nonfiction Combined Print & E-Book.