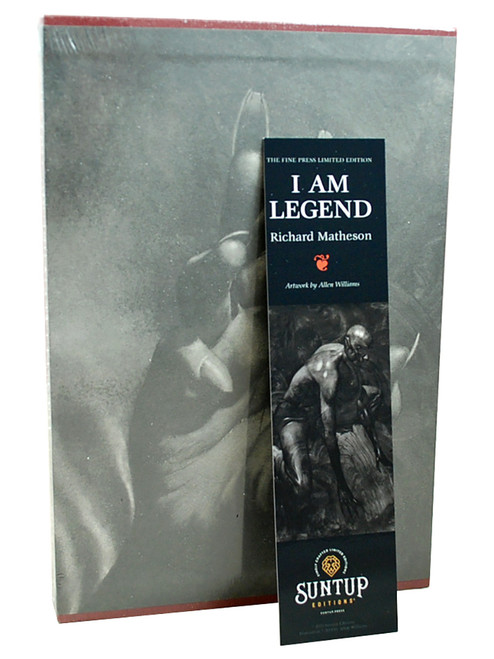 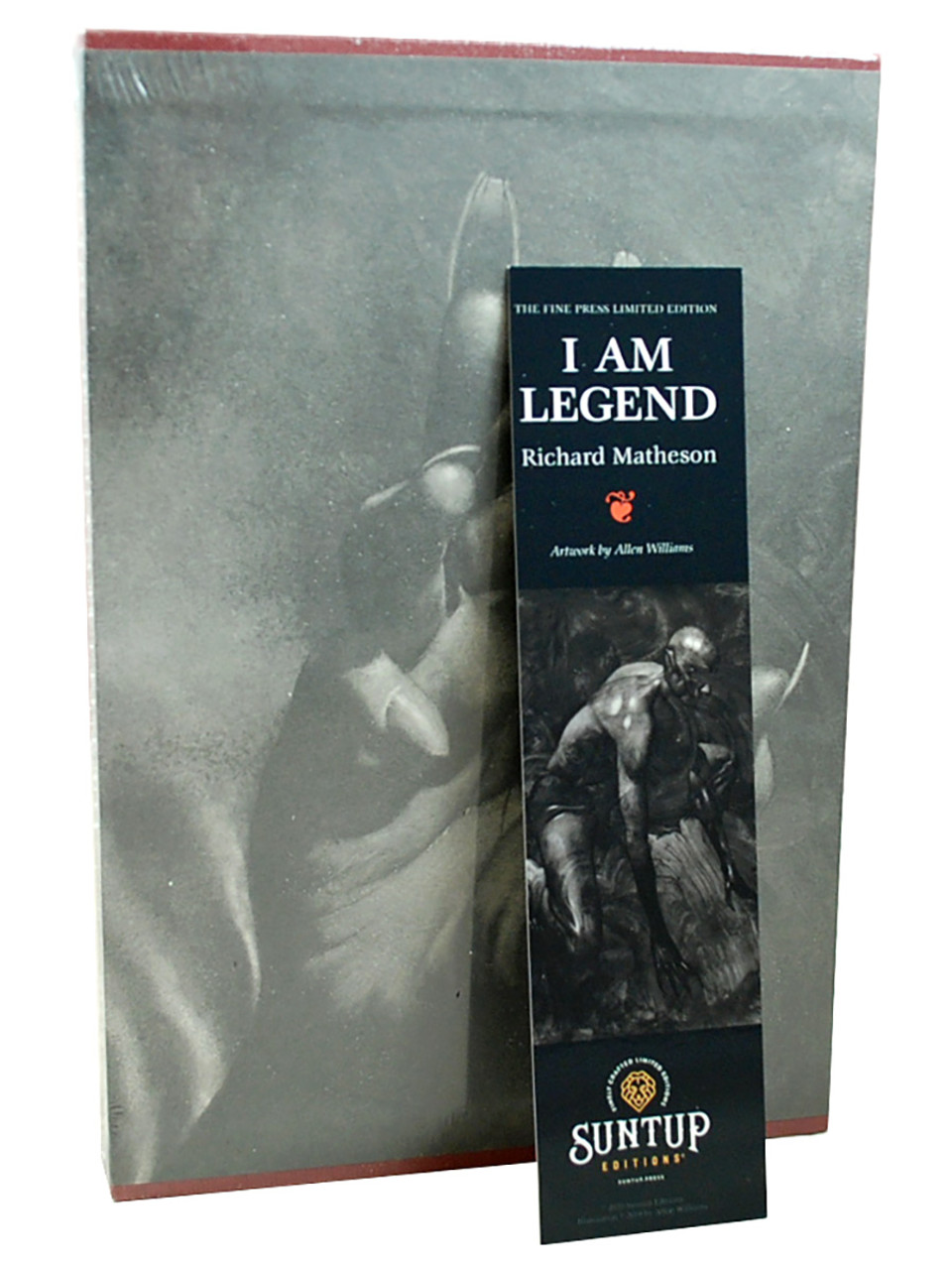 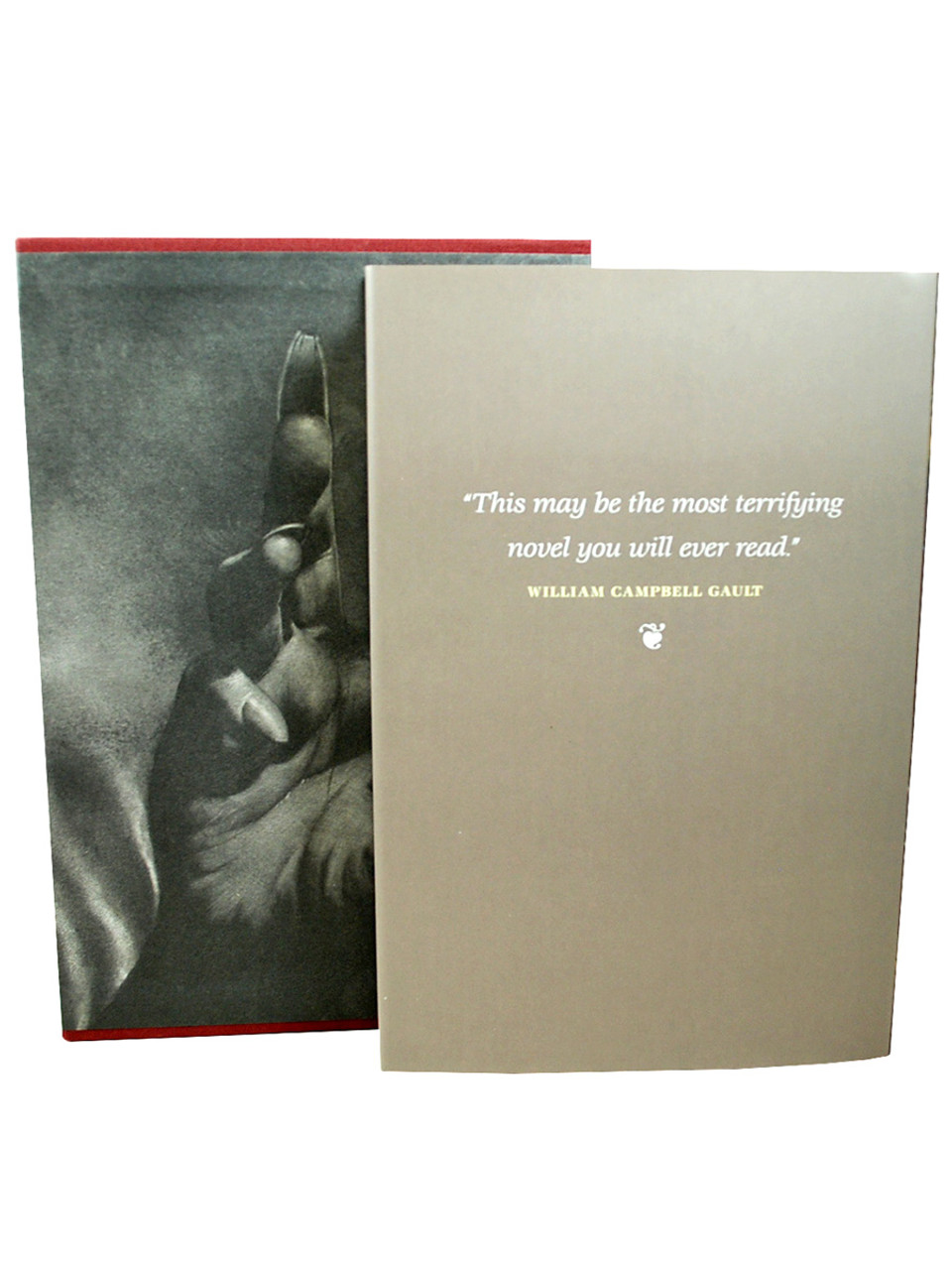 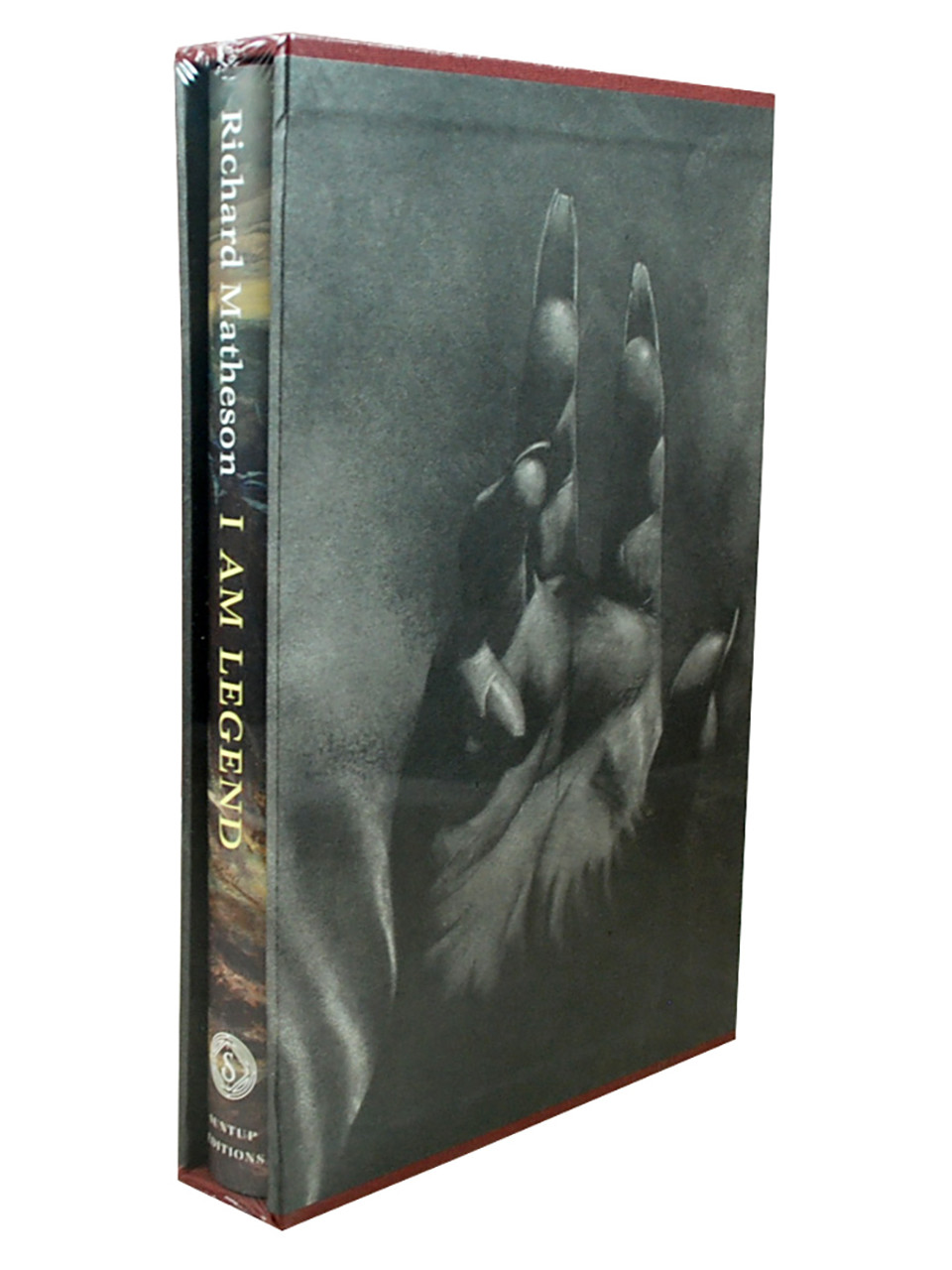 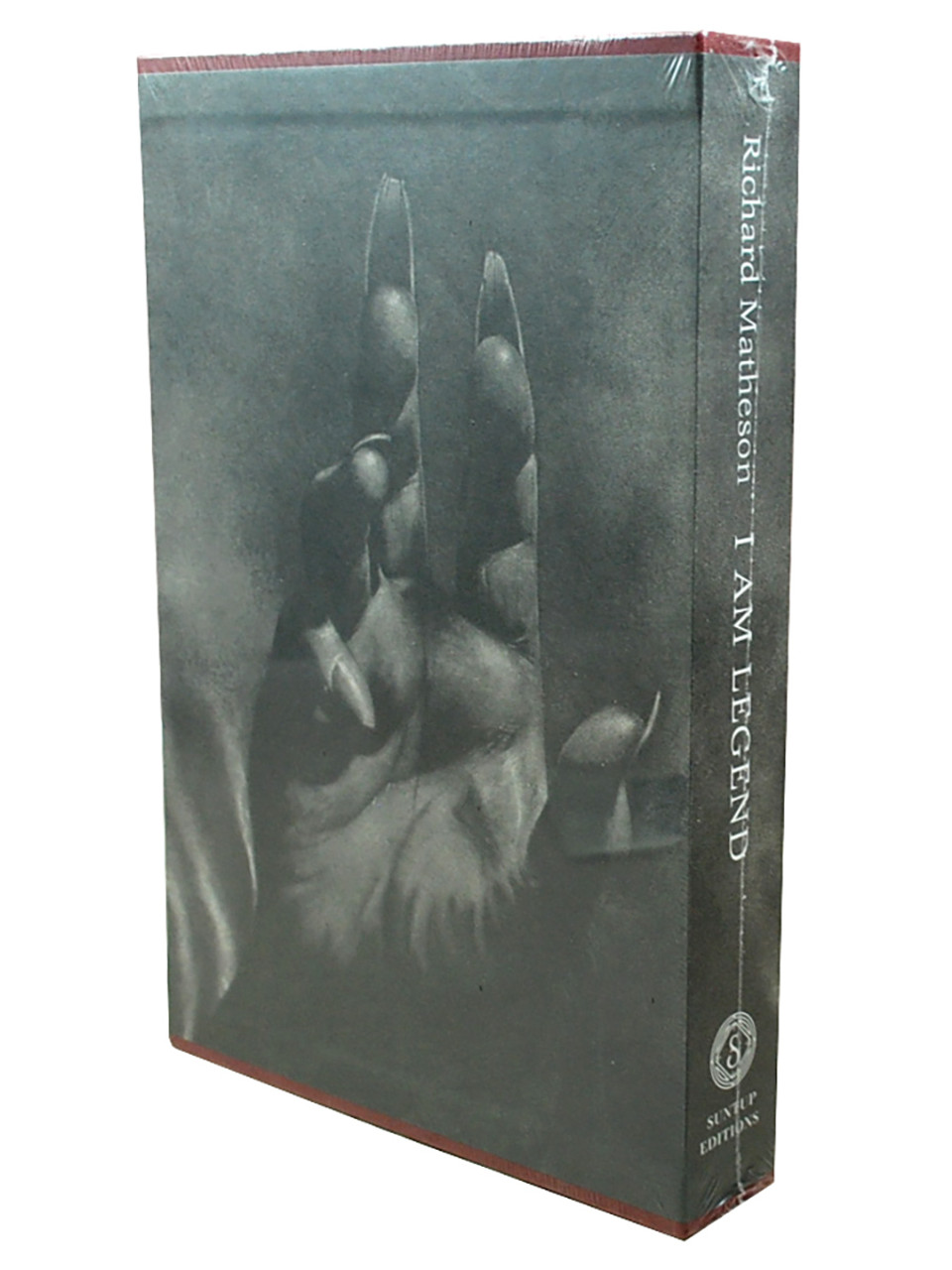 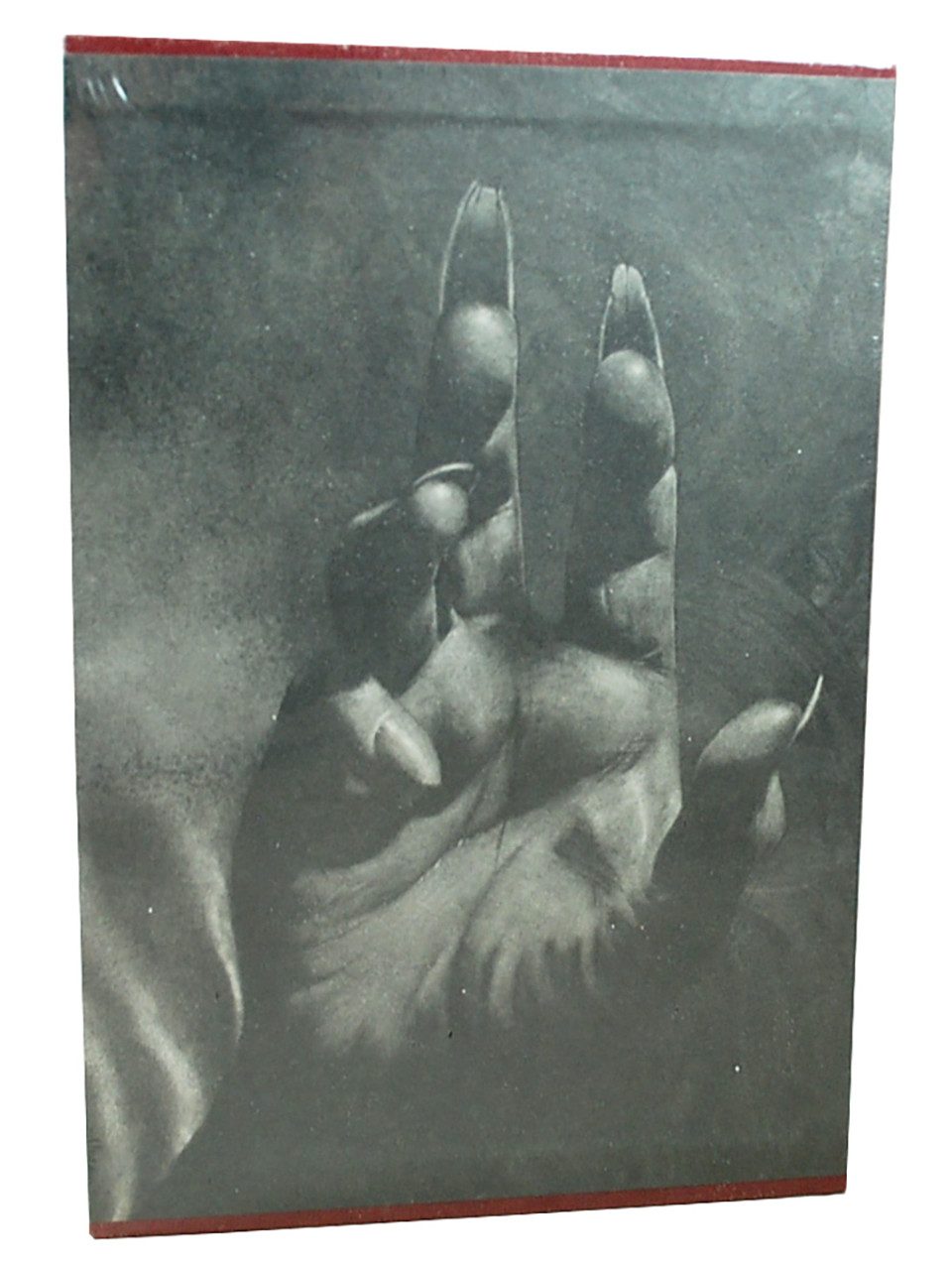 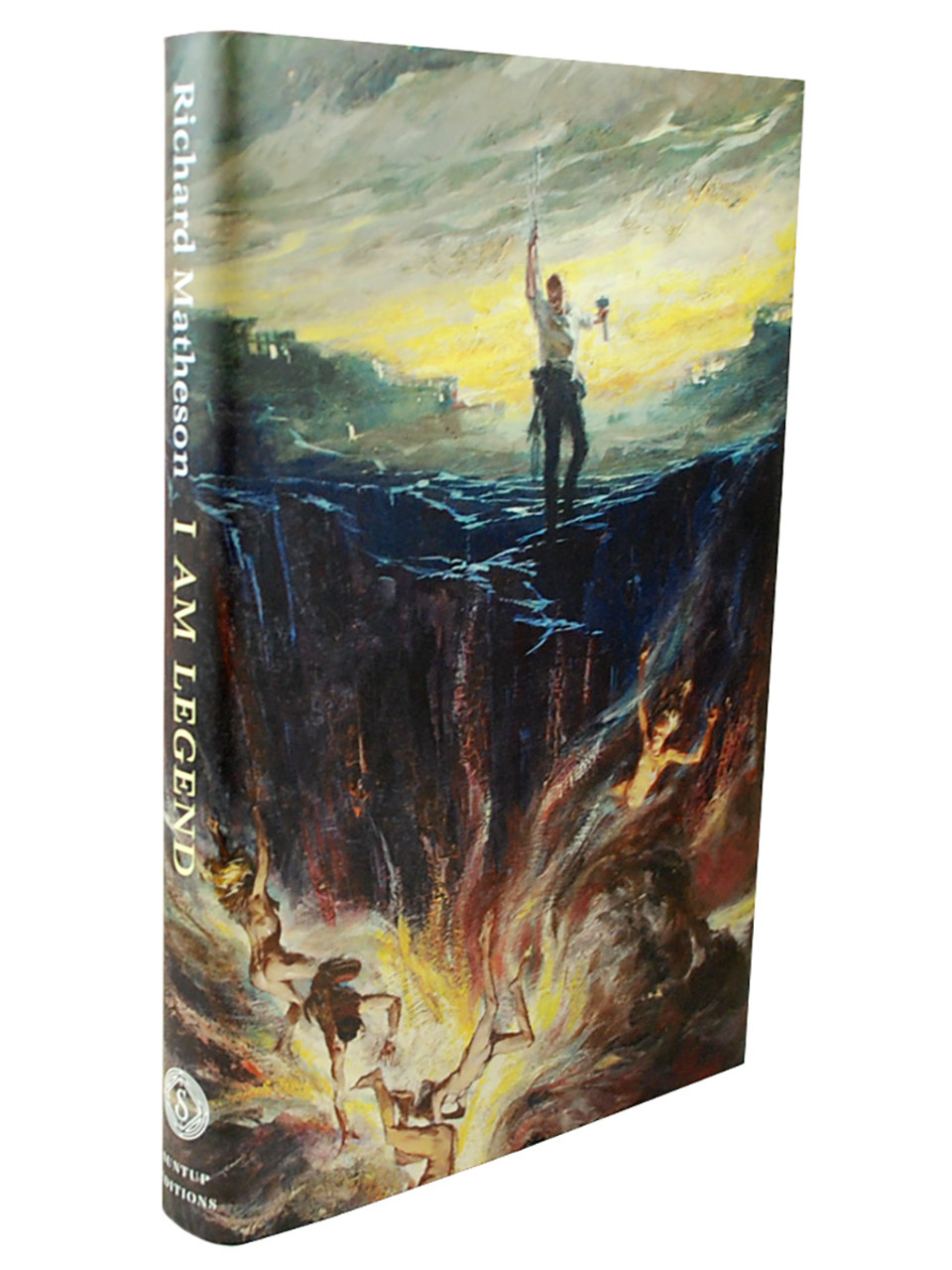 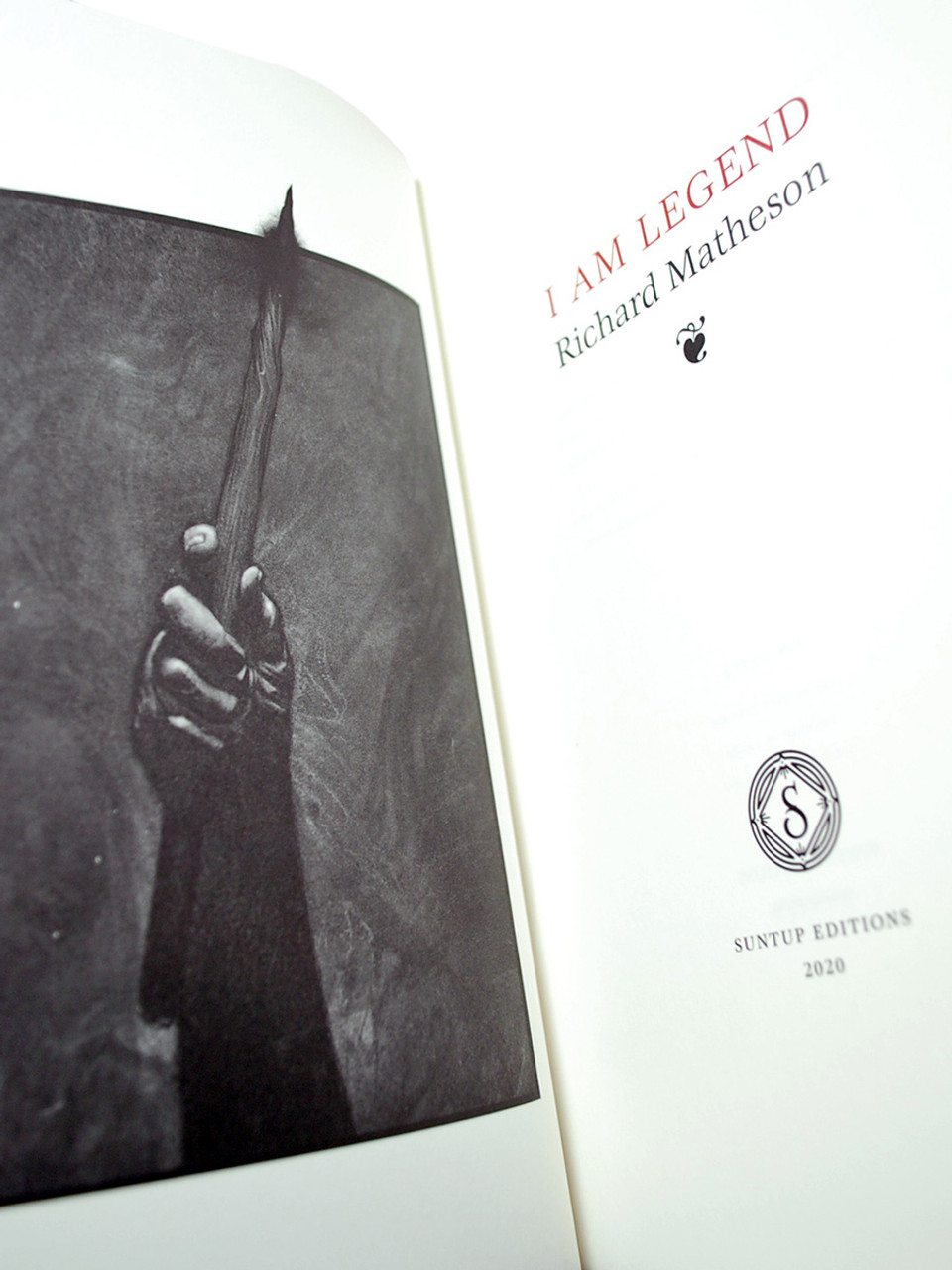 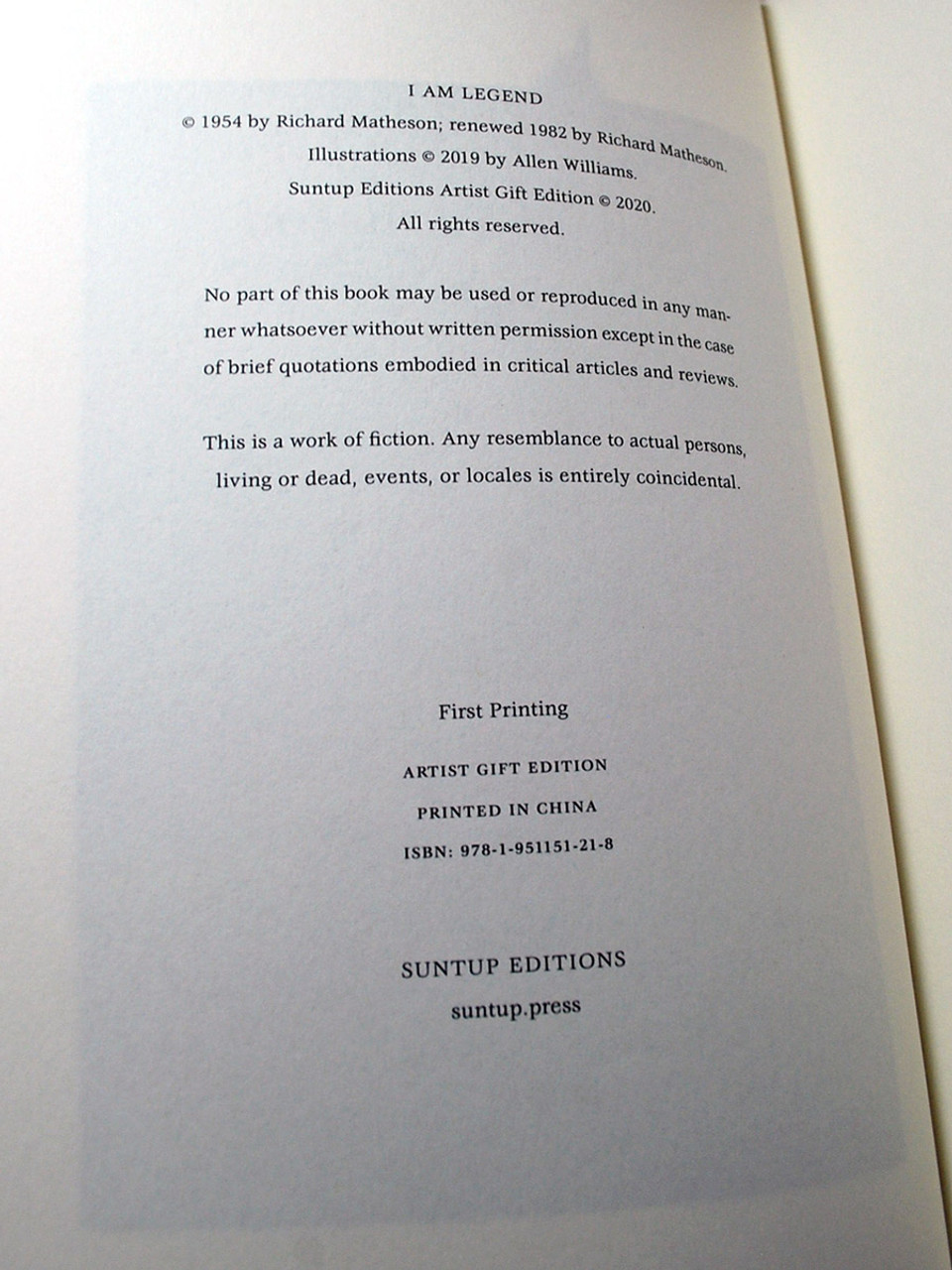 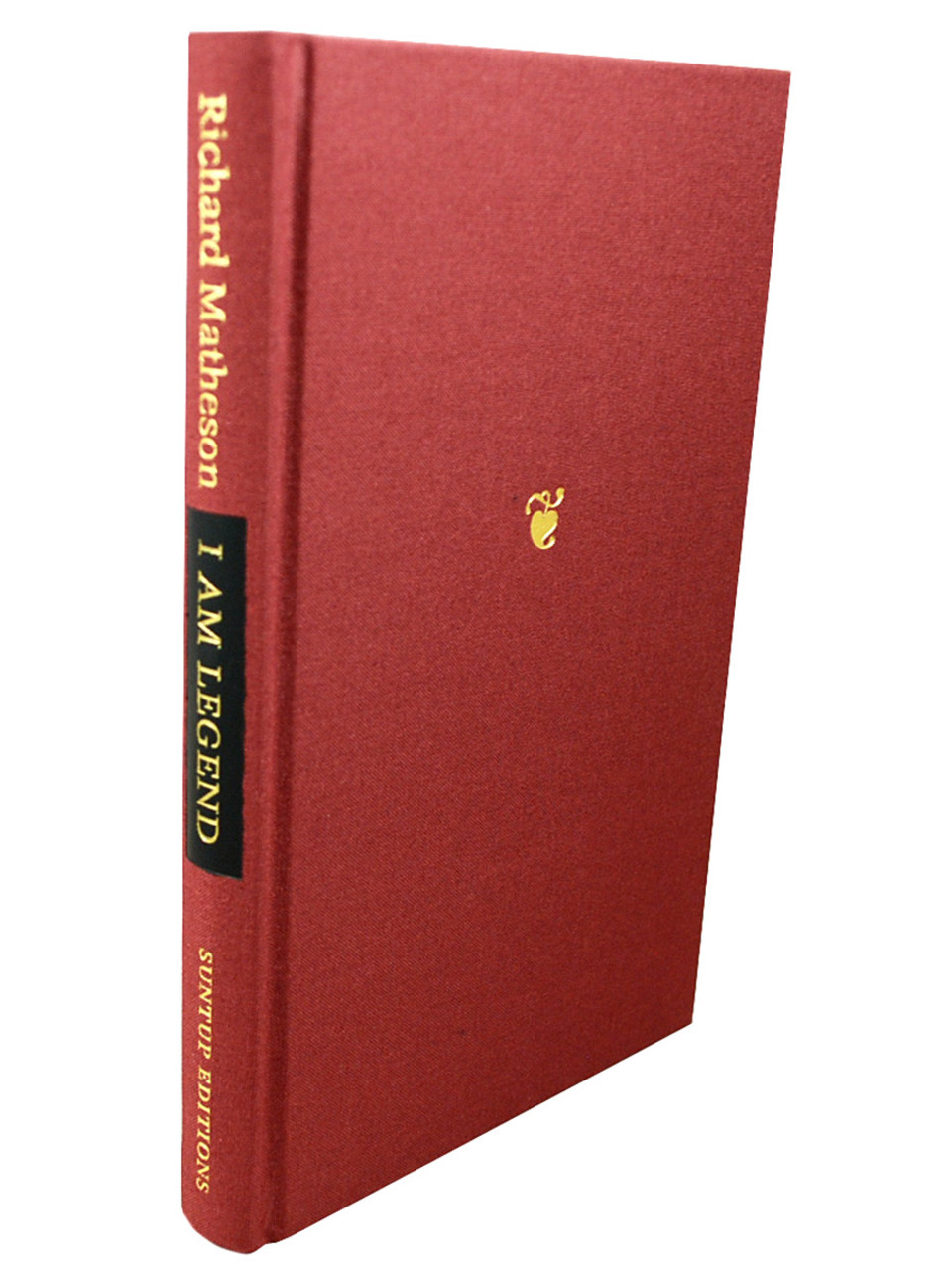 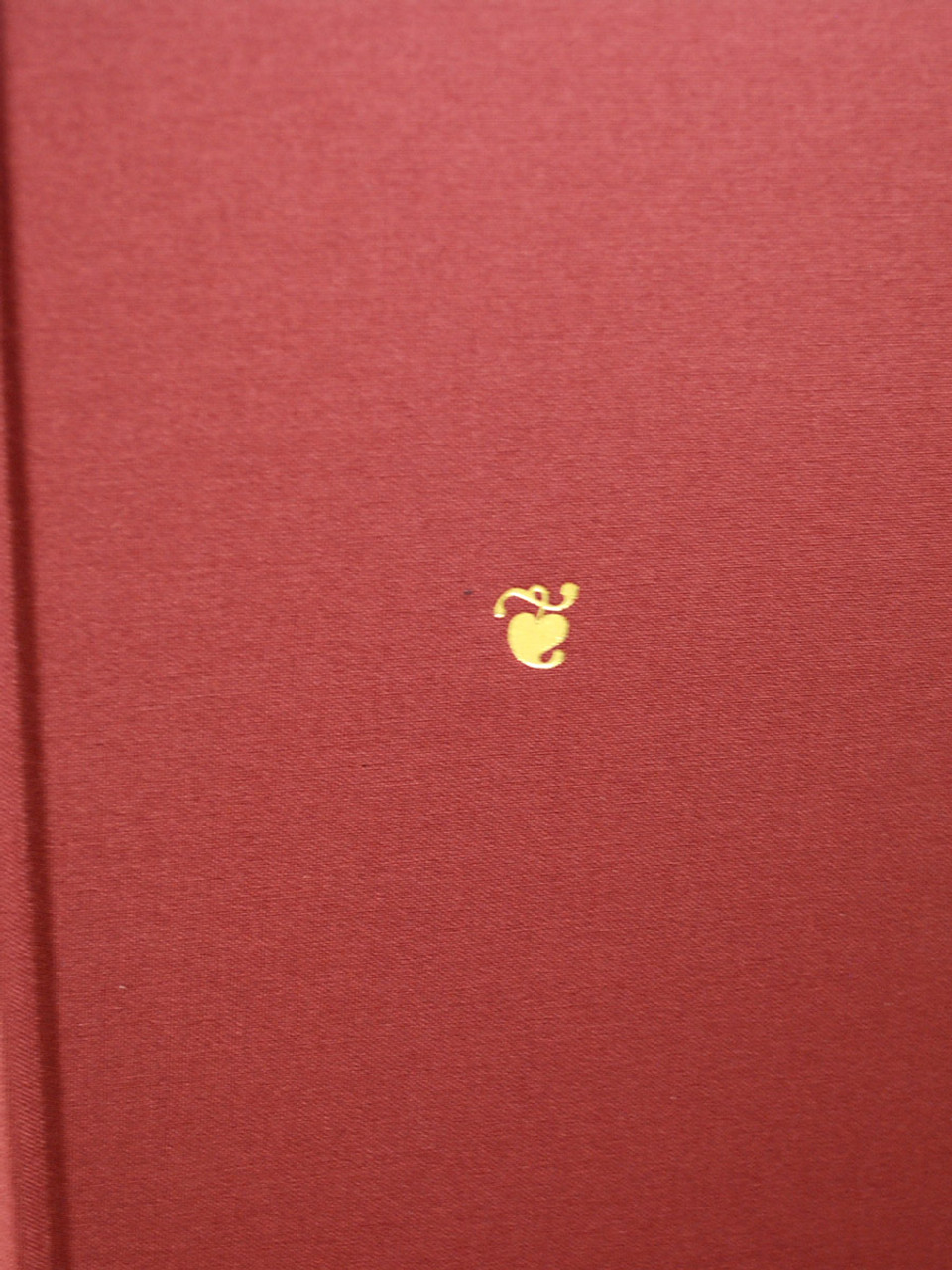 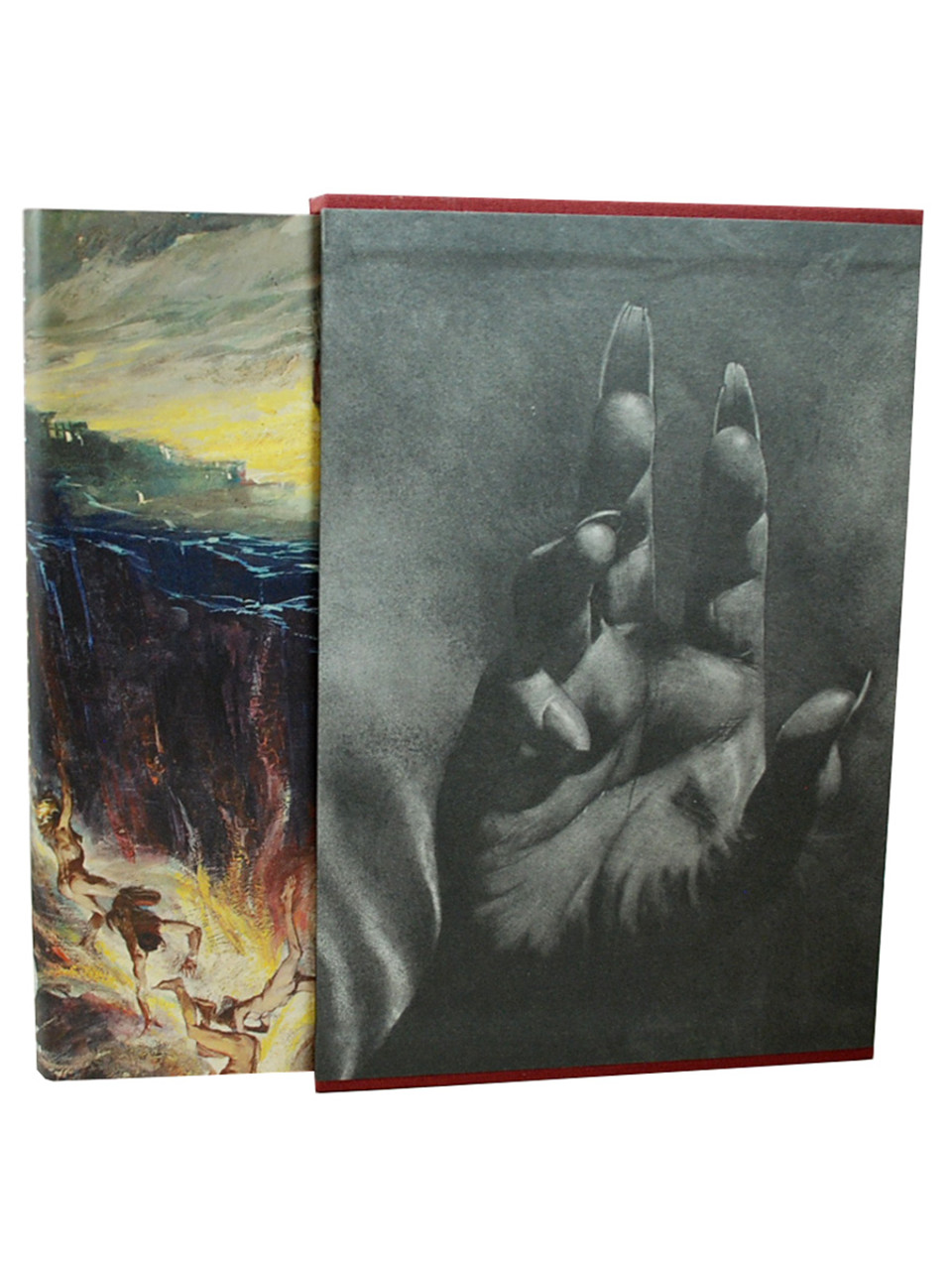 Suntup Press 2020. Richard Matheson "I Am Legend" Artist Gift Edition. First Printing as stated on the copyright page. Slipcased gift edition. Sealed without any flaws. Includes the original bookmarker from the publisher.

Signed by Allen Williams, the Artist Gift edition is limited to 1000 copies and features a dust jacket with cover art by Stanley Meltzoff (1917-2006) from the original 1954 edition. It is a full cloth smyth-sewn binding with two-hits foil stamping, and printed endsheets. It is the only edition of the three with the dust jacket. The book is printed offset, and is housed in a printed slipcase with cloth on the upper and lower sections.

"This may be the most terrifying novel you will ever read.” This quote from mystery writer William Campbell Gault graced the first edition cover of what would become one of the most influential and adapted works of the 20th century.

The fine press limited edition of "I Am Legend" by Richard Matheson is presented in three states: Lettered, Numbered and Artist Gift editions. This is the Lettered Edition with the following features: 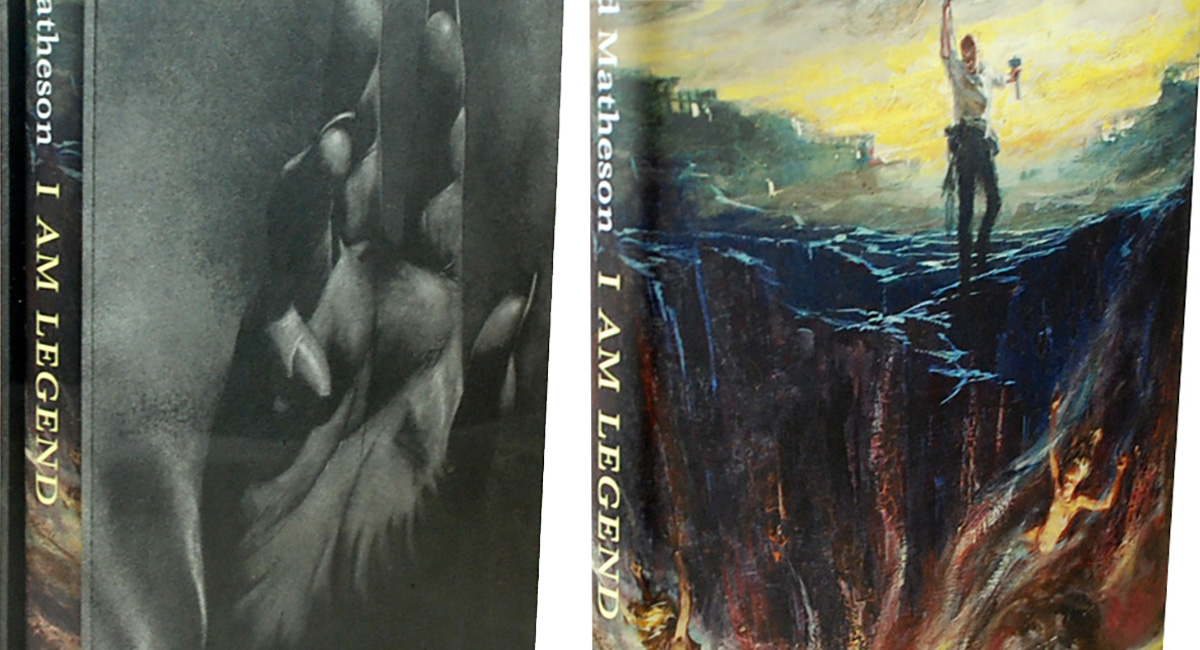 Originally published in 1954, Richard Matheson’s I Am Legend ushered in a different kind of novel, defying and transcending genre to combine elements of horror and science fiction within a post-apocalyptic frame. 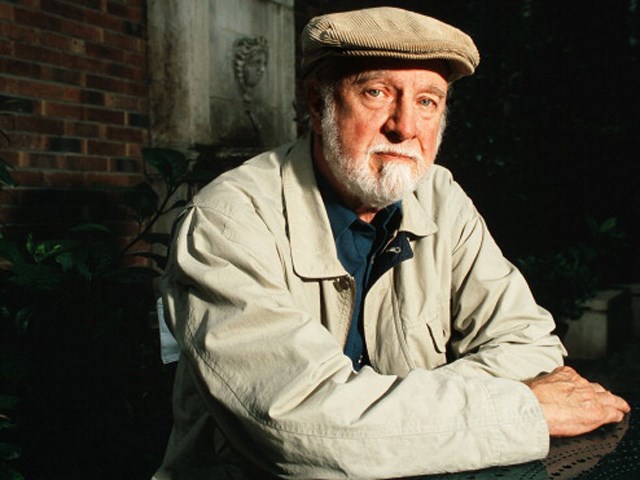 “We worked very closely with Richard Christian Matheson throughout the project to create an edition that honors the legacy of the author and this groundbreaking novel.” — Paul Suntup 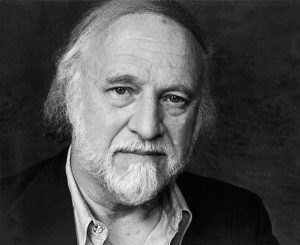 Richard Matheson (1926-2013) is the author of many classic novels and short stories. He wrote in a variety of genres including terror, fantasy, horror, paranormal, suspense, science fiction and western. In addition to books, he wrote prolifically for television (including The Twilight Zone, Night Gallery, Star Trek) and numerous feature films. Many of Matheson’s novels and stories have been made into movies including I Am Legend, Somewhere in Time, The Shrinking Man and What Dreams May Come. His many awards include the World Fantasy and Bram Stoker Awards for Lifetime Achievement, the Hugo Award, Edgar Award, Spur Award for Best Western Novel, multiple Writer’s Guild awards, and in 2010 he was inducted into the Science Fiction Hall of Fame. 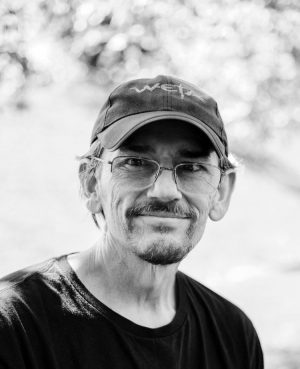 Allen Williams is an award winning illustrator, concept designer and fine artist. From a young age a pencil and paper was an escape and a refuge for Allen. Now nationally and internationally known, for over 28 years Allen has applied his talents to everything from illustration for gaming companies and book covers, to concept work for major motion pictures and television. His vision for such projects ranges from illustration to concept work and creature and character designs.

The limited edition of I Am Legend by Richard Matheson is presented in three states: Lettered, Numbered and Artist Gift editions. The editions measure 6” x 9” trim size and feature six black & white illustrations by award winning artist Allen Williams. All copies are signed by the artist.

Please note that Artist Gift editions are not numbered.

Title and chapter pages printed with an additional spot color.

Housed in printed slipcase with cloth on the upper and lower sections.

Custom bookmark with all orders.

VERY FINE GUARANTEED. Sealed. – Very Fine condition as if normally shipped from the publisher. The condition is of the highest quality without any discernible flaws. Sharp corners all around. Unread book without any marks, writing, or stamps. This item will be packed to the highest standard and shipped in a timely manner by Priority Mail with tracking number and signature confirmation.