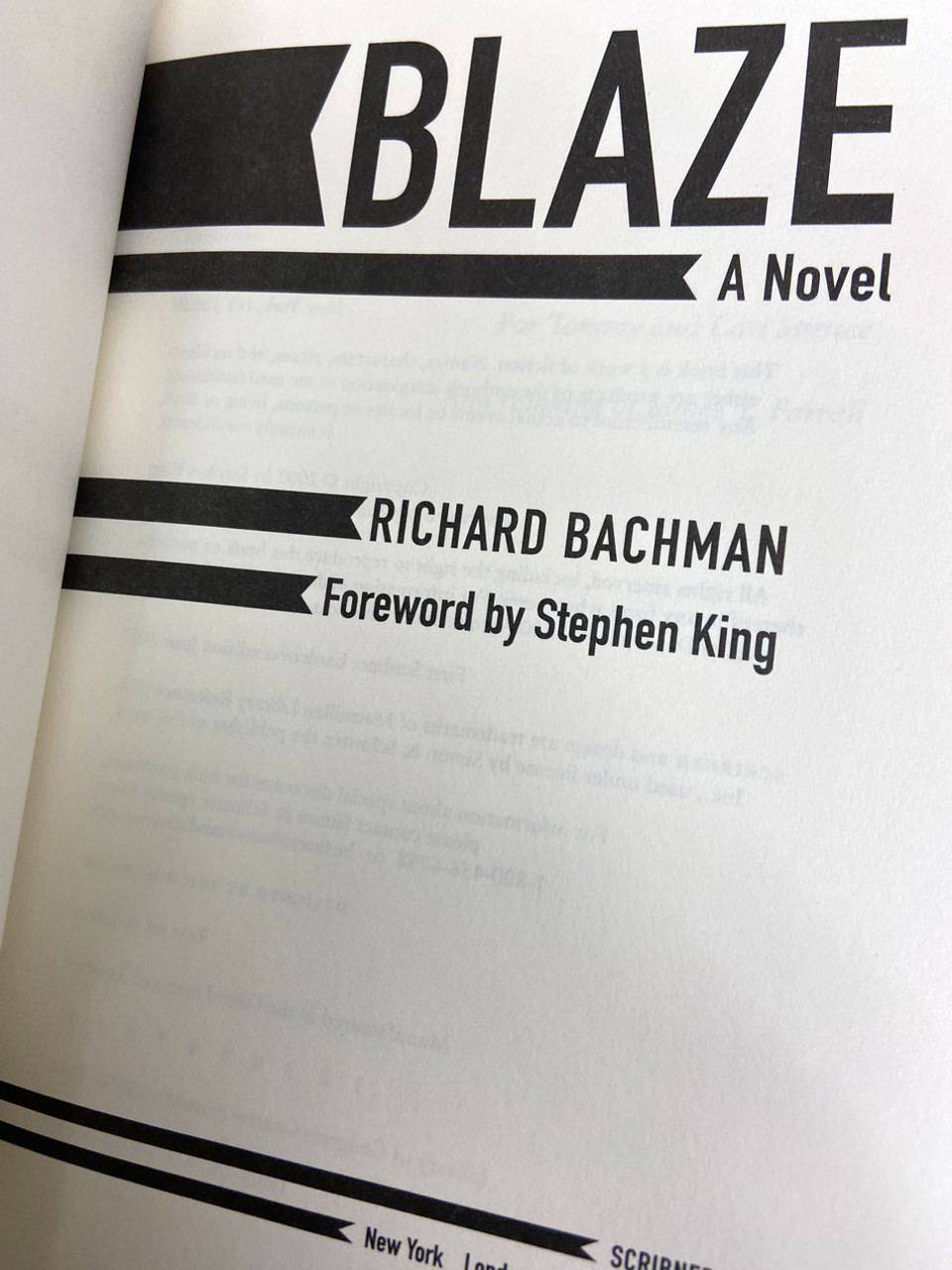 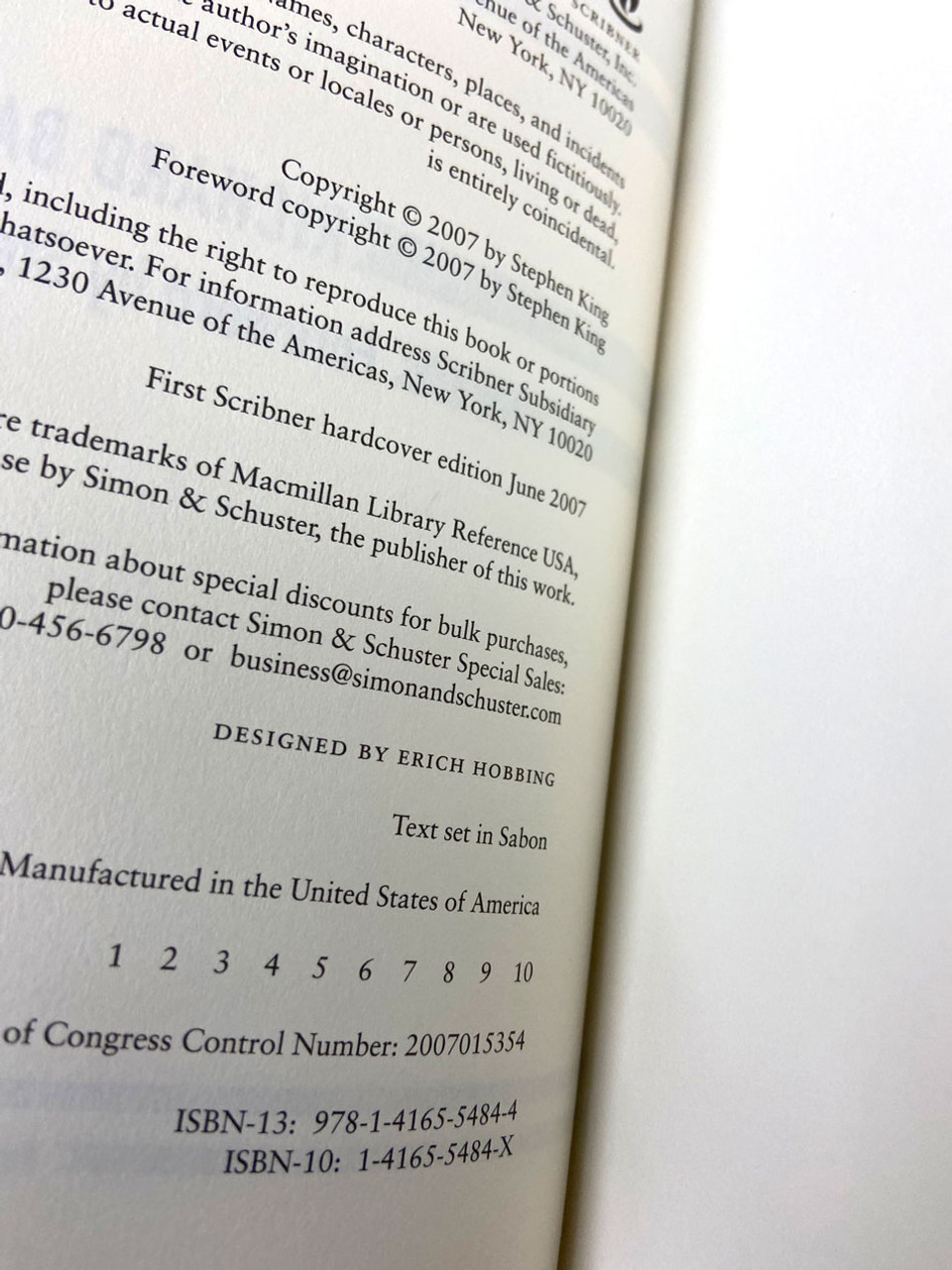 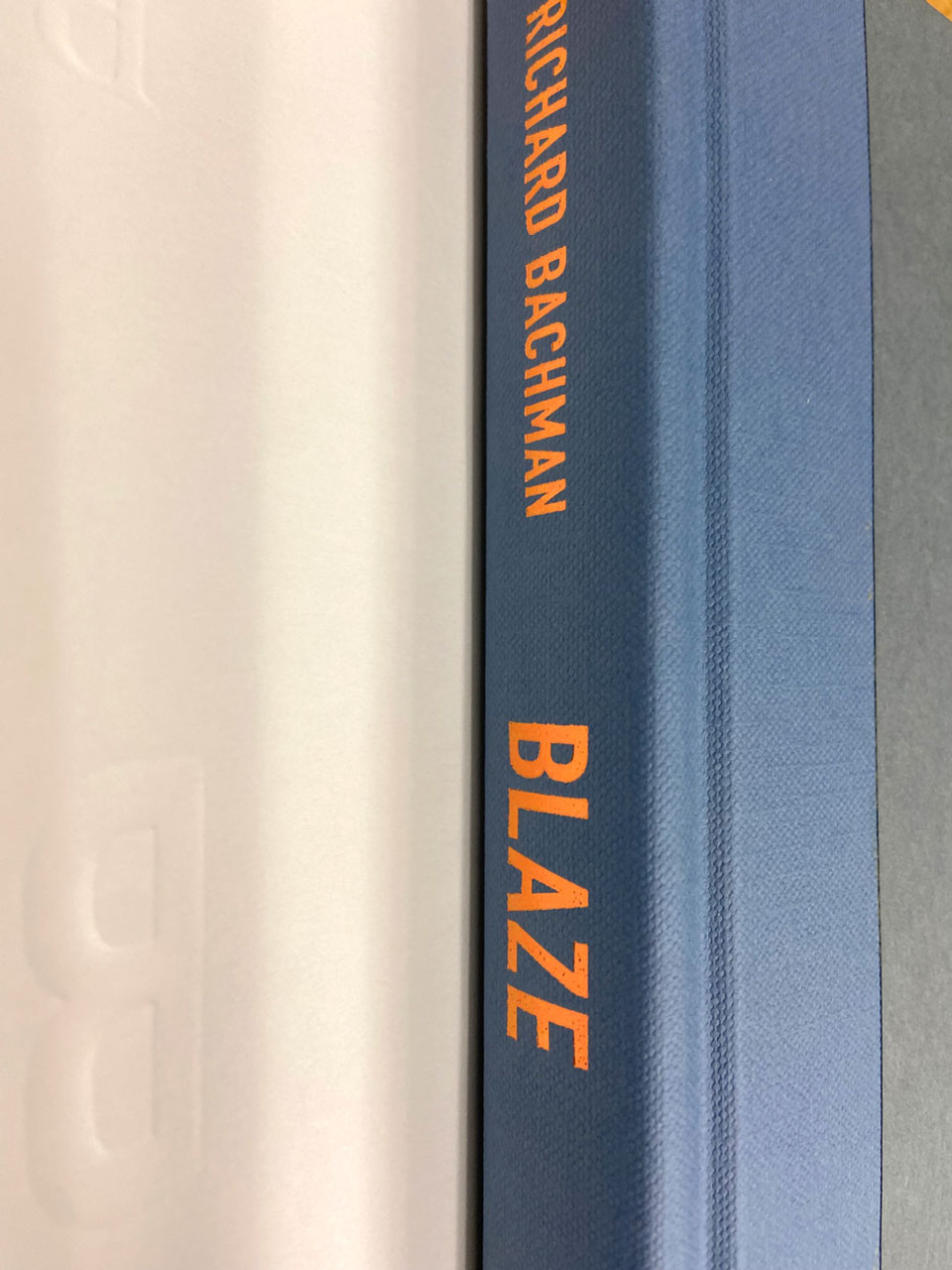 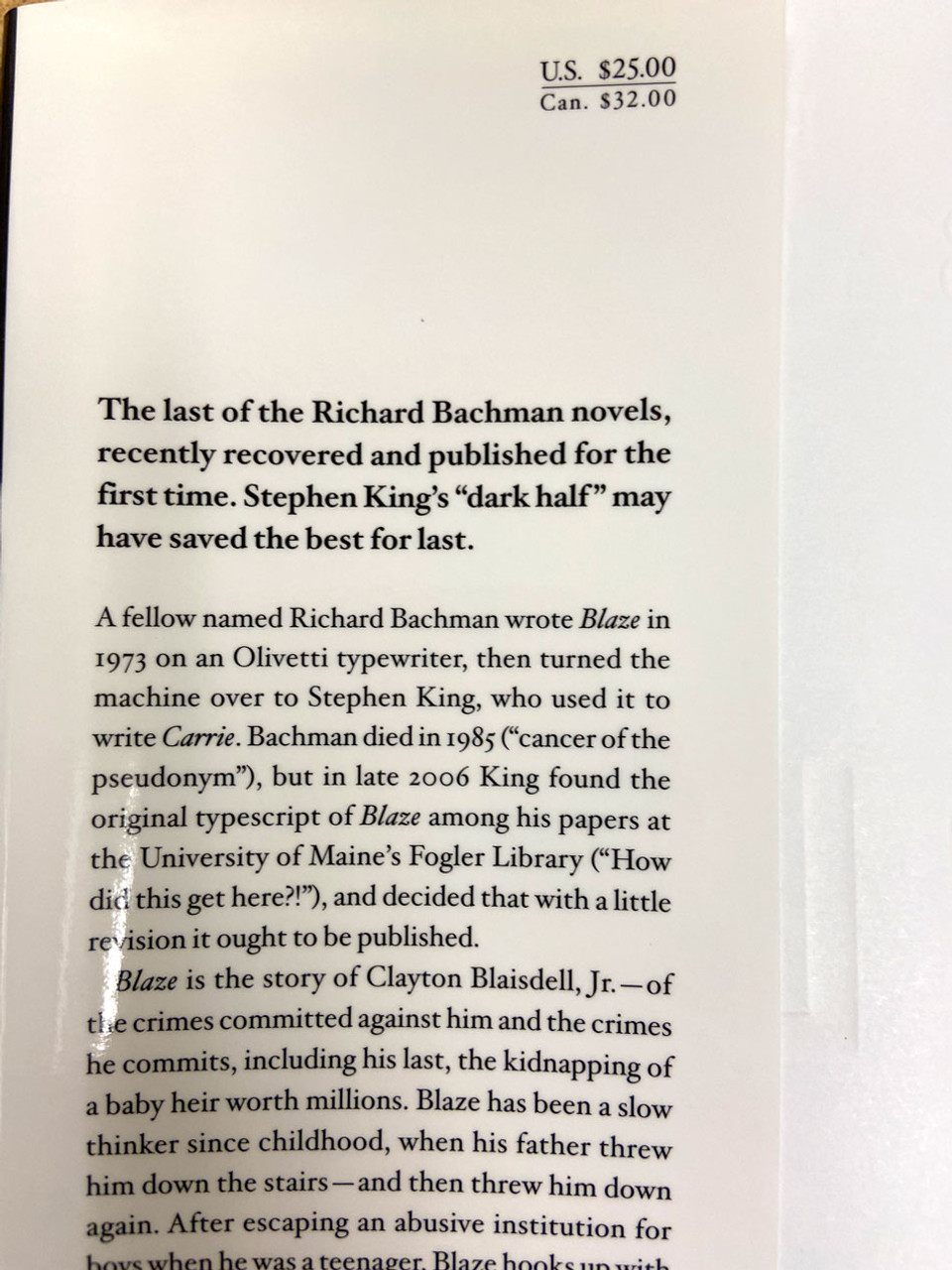 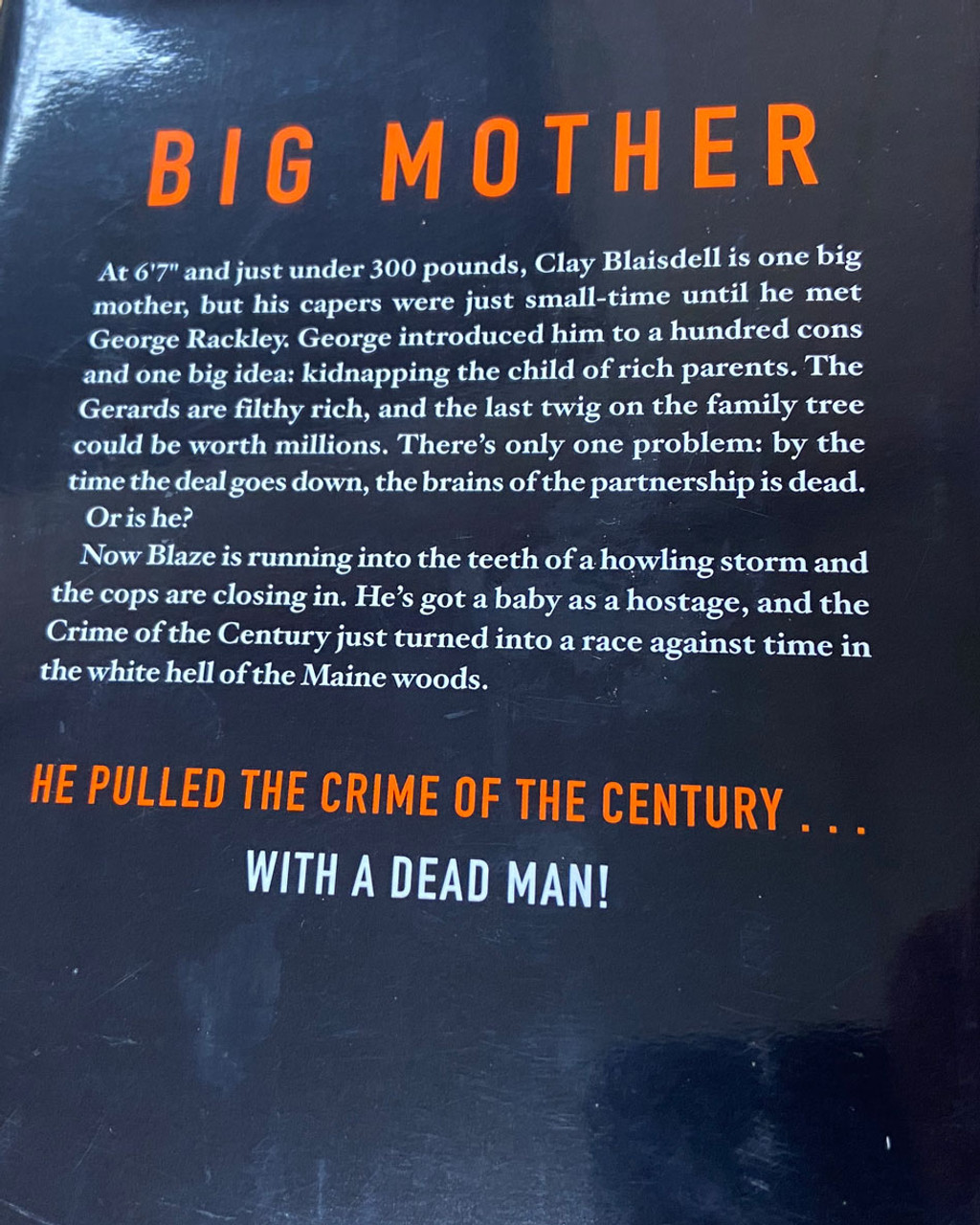 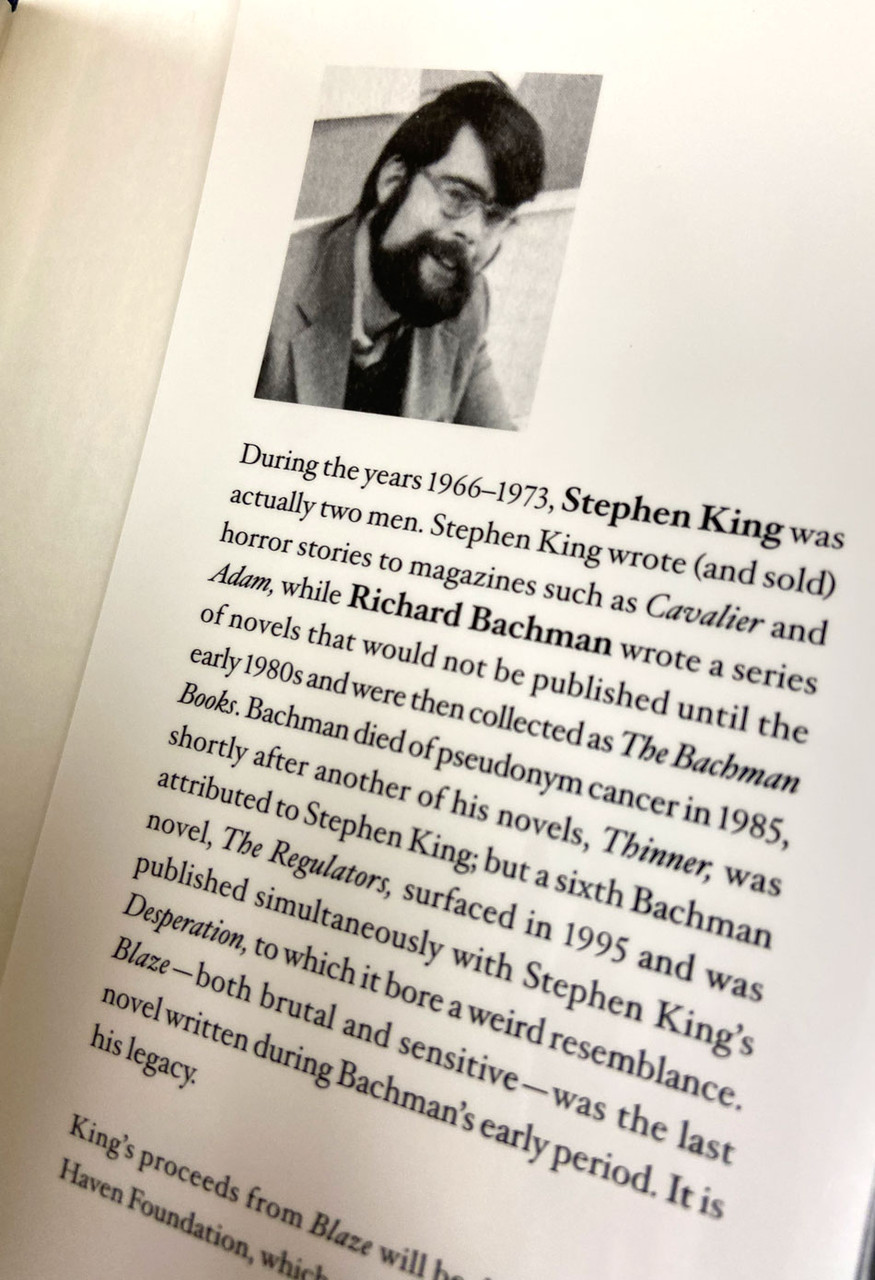 Contains all the correct markings of a First Edition, First Printing:

Master storyteller Stephen King (writing as Richard Bachman) presents this gripping and remarkable New York Times bestselling crime novel about a damaged young man who embarks on an ill-advised kidnapping plot—a work as taut and riveting as anything he has ever written.

Once upon a time, a fellow named Richard Bachman wrote Blaze on an Olivetti typewriter, then turned the machine over to Stephen King, who used it to write Carrie. Bachman died in 1985 (“cancer of the pseudonym”), but this last gripping Bachman novel resurfaced after being hidden away for decades—an unforgettable crime story tinged with sadness and suspense.

Clayton Blaisdell, Jr., was always a small-time delinquent. None too bright either, thanks to the beatings he got as a kid. Then Blaze met George Rackley, a seasoned pro with a hundred cons and one big idea. The kidnapping should go off without a hitch, with George as the brains behind their dangerous scheme. But there's only one problem: by the time the deal goes down, Blaze's partner in crime is dead. Or is he?

The last of the Richard Bachman novels, recently recovered and published for the first time. Stephen King's "dark half" may have saved the best for last.

A fellow named Richard Bachman wrote Blaze in 1973 on an Olivetti typewriter, then turned the machine over to Stephen King, who used it to write Carrie. Bachman died in 1985 ("cancer of the pseudonym"), but in late 2006 King found the original typescript of Blaze among his papers at the University of Maine's Fogler Library ("How did this get here?!"), and decided that with a little revision it ought to be published.

Blaze is the story of Clayton Blaisdell, Jr. --of the crimes committed against him and the crimes he commits, including his last, the kidnapping of a baby heir worth millions. Blaze has been a slow thinker since childhood, when his father threw him down the stairs--and then threw him down again. After escaping an abusive institution for boys when he was a teenager, Blaze hooks up with George, a seasoned criminal who thinks he has all the answers. But then George is killed, and Blaze, though haunted by his partner, is on his own.

He becomes one of the most sympathetic criminals of all of literature. This is a crime story of surprising strength and sadness, with a suspenseful current sustained by the classic workings of fate and character--as taut and riveting as Stephen King's The Girl Who Loved Tom Gordon.

Stephen King is the author of more than sixty books, all of them worldwide bestsellers. His recent work includes If It Bleeds, The Institute, Elevation, The Outsider, Sleeping Beauties (cowritten with his son Owen King), and the Bill Hodges trilogy: End of Watch, Finders Keepers, and Mr. Mercedes (an Edgar Award winner for Best Novel and a television series streaming on Peacock). His novel 11/22/63 was named a top ten book of 2011 by The New York Times Book Review and won the Los Angeles Times Book Prize for Mystery/Thriller. His epic works The Dark Tower, It, Pet Sematary, and Doctor Sleep are the basis for major motion pictures, with It now the highest-grossing horror film of all time. He is the recipient of the 2020 Audio Publishers Association Lifetime Achievement Award, the 2018 PEN America Literary Service Award, the 2014 National Medal of Arts, and the 2003 National Book Foundation Medal for Distinguished Contribution to American Letters. He lives in Bangor, Maine, with his wife, novelist Tabitha King.

King's comments on the book:

On King's website, the following was posted in the "Future Works" section on November 28, 2006:

Many of you have been asking for more information about publication of Blaze following Steve's mention of it on his recent Lisey's Story book tour. This is another Bachman novel which he recently rediscovered. The original manuscript of Blaze was 173 pages long and was written in 1973. He has rewritten the first 100 pages. A lot of it needed editing to make it more timely since the 1973 references no longer worked. He's hoping to get it done by the end of the year. No publication deal has been signed, but he's sure there will be one.

I have been thinking about [Blaze] off and on for a while and every time I would think about it... you know I did the early books as Richard Bachman books and this is going to be a Bachman because it came from the same time. It was written right before Carrie and finally I thought to myself... the reason I've never done it was because, in my memory at least, it was a tearjerker of a book, you know it was kind of sentimental and just kind of... every now and then I think of what Oscar Wilde said about The Little Match Girl. He said that it's impossible to read about the little match girl without weeping tears of laughter and... you know something that is so sad it's actually funny.

VERY FINE GUARANTEED. Sealed. Clean & straight boards. No writings or stamps. No attached bookplates or signs of any removed. A well-cared for book, protected from any potential damage. This book stands out as having had exemplary care. Square and tight spine. Not price-clipped. Dust-jacket free of tears or creases. Excellent original example. Brand new clear Mylar covering. Collector's grade hardcover book for your Stephen King library.