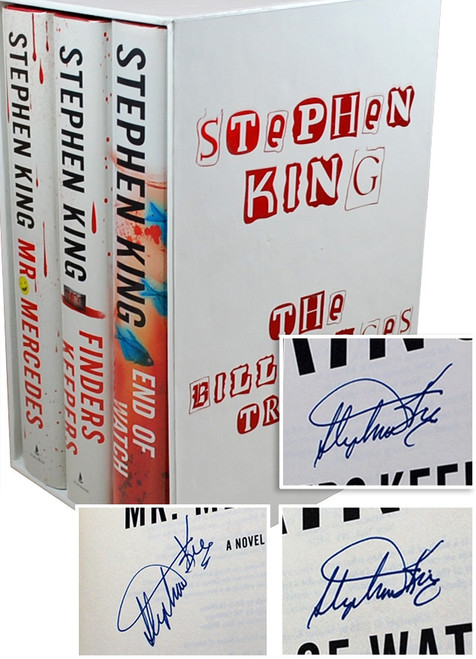 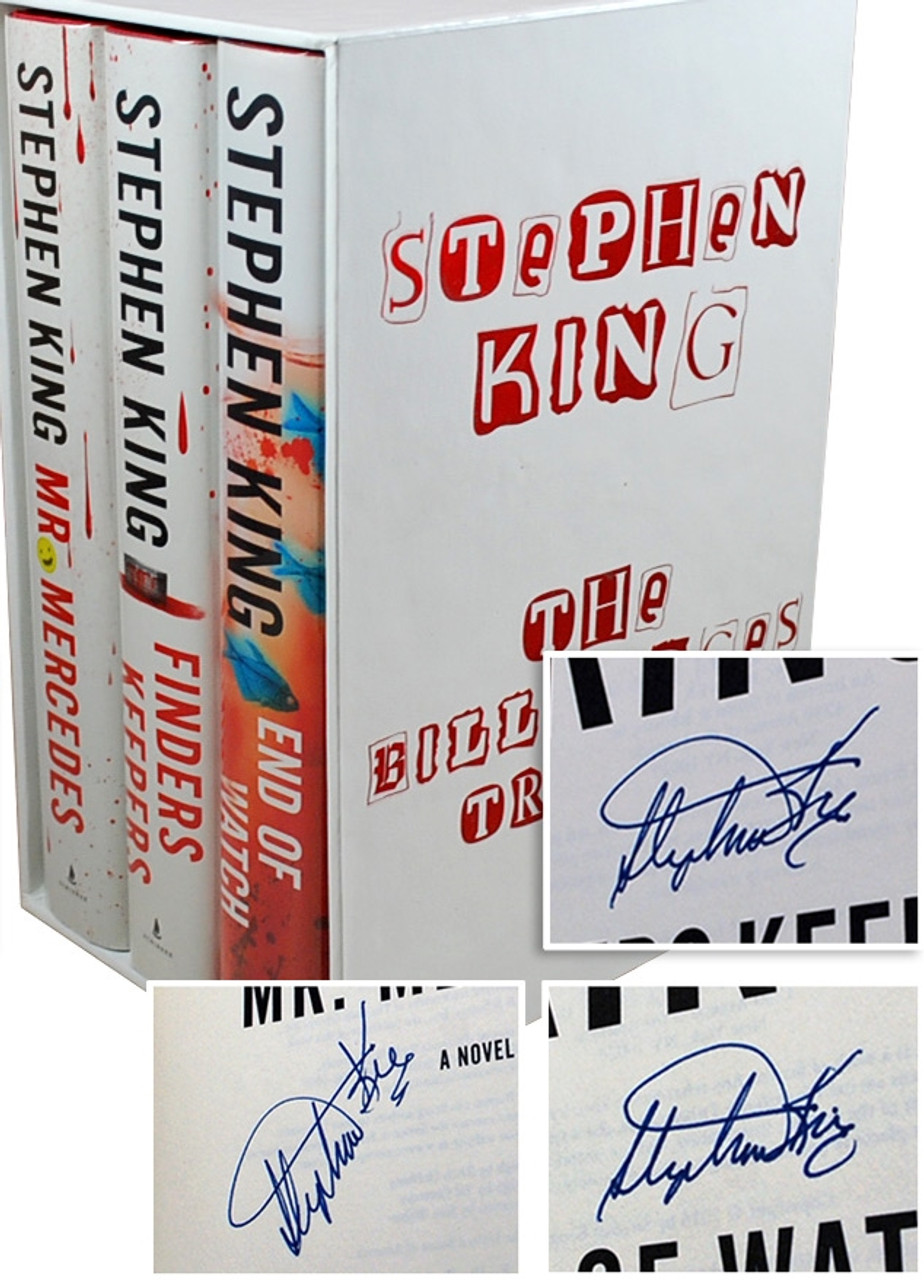 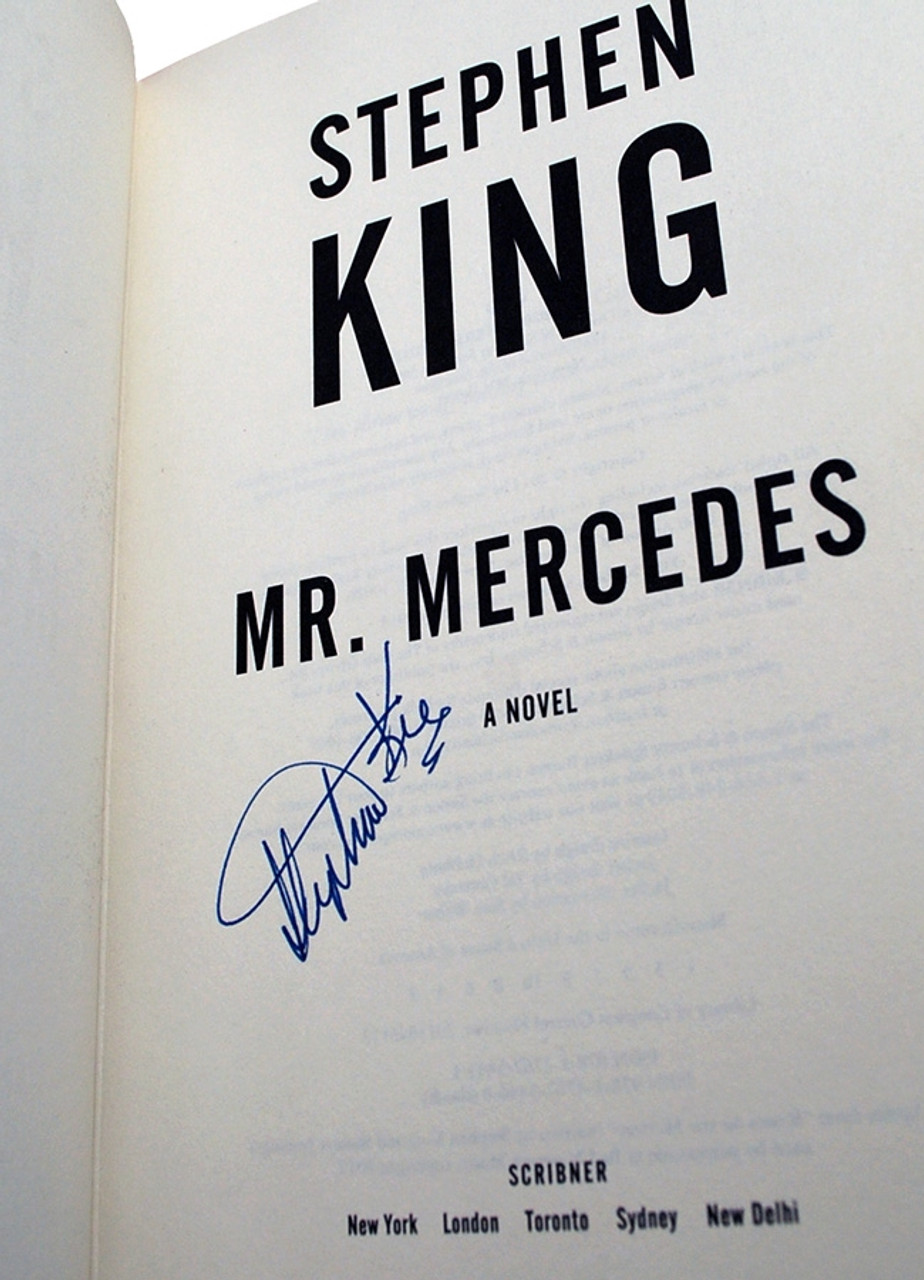 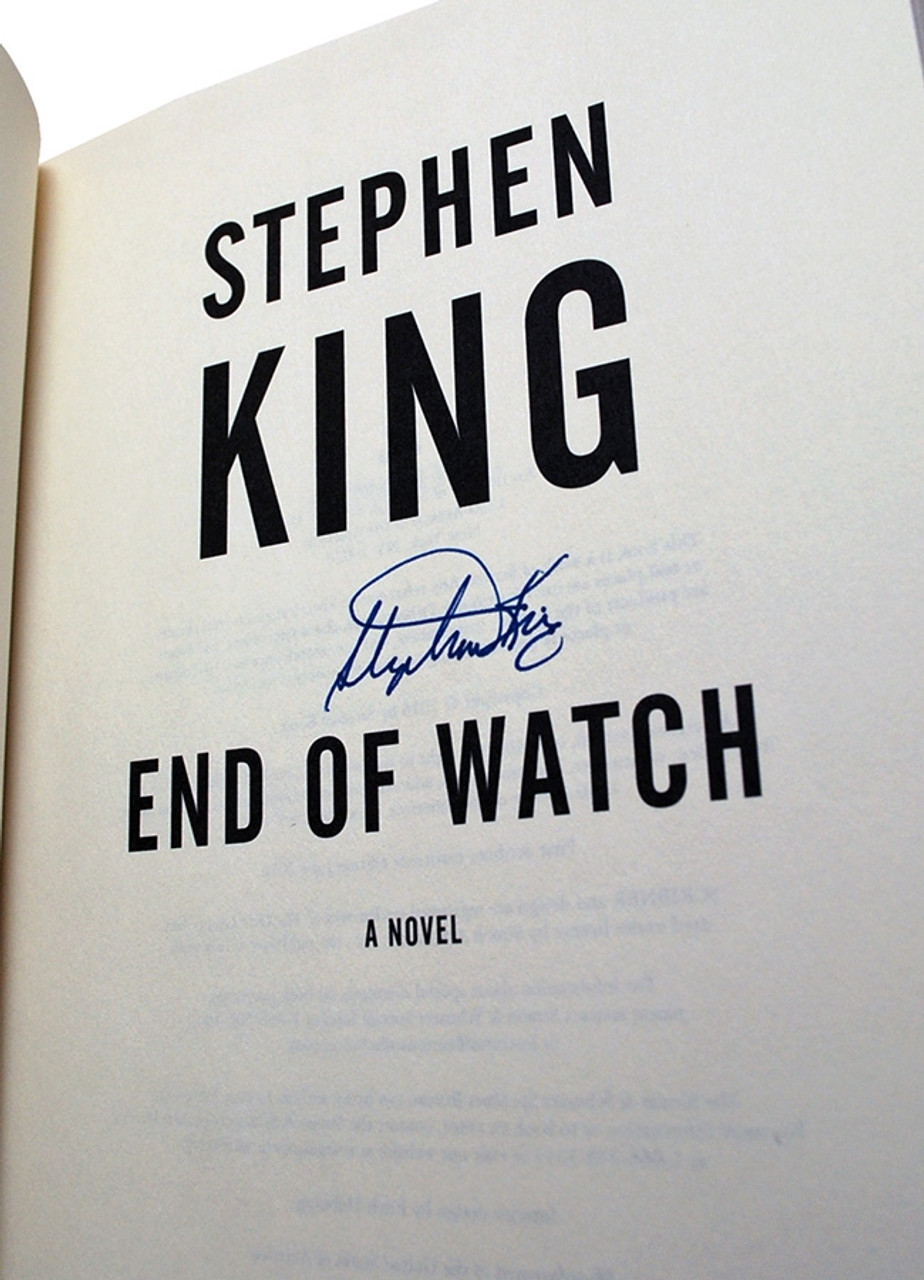 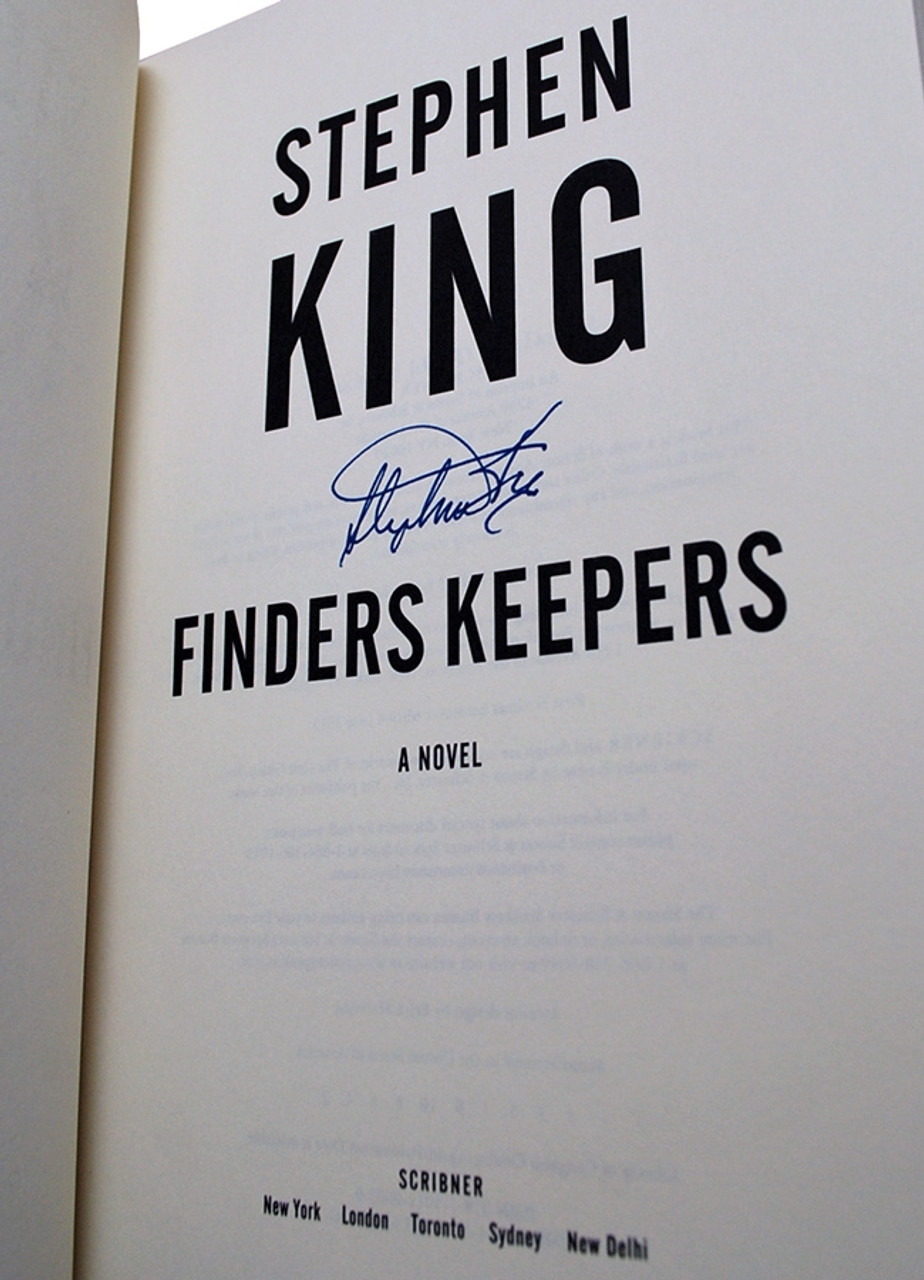 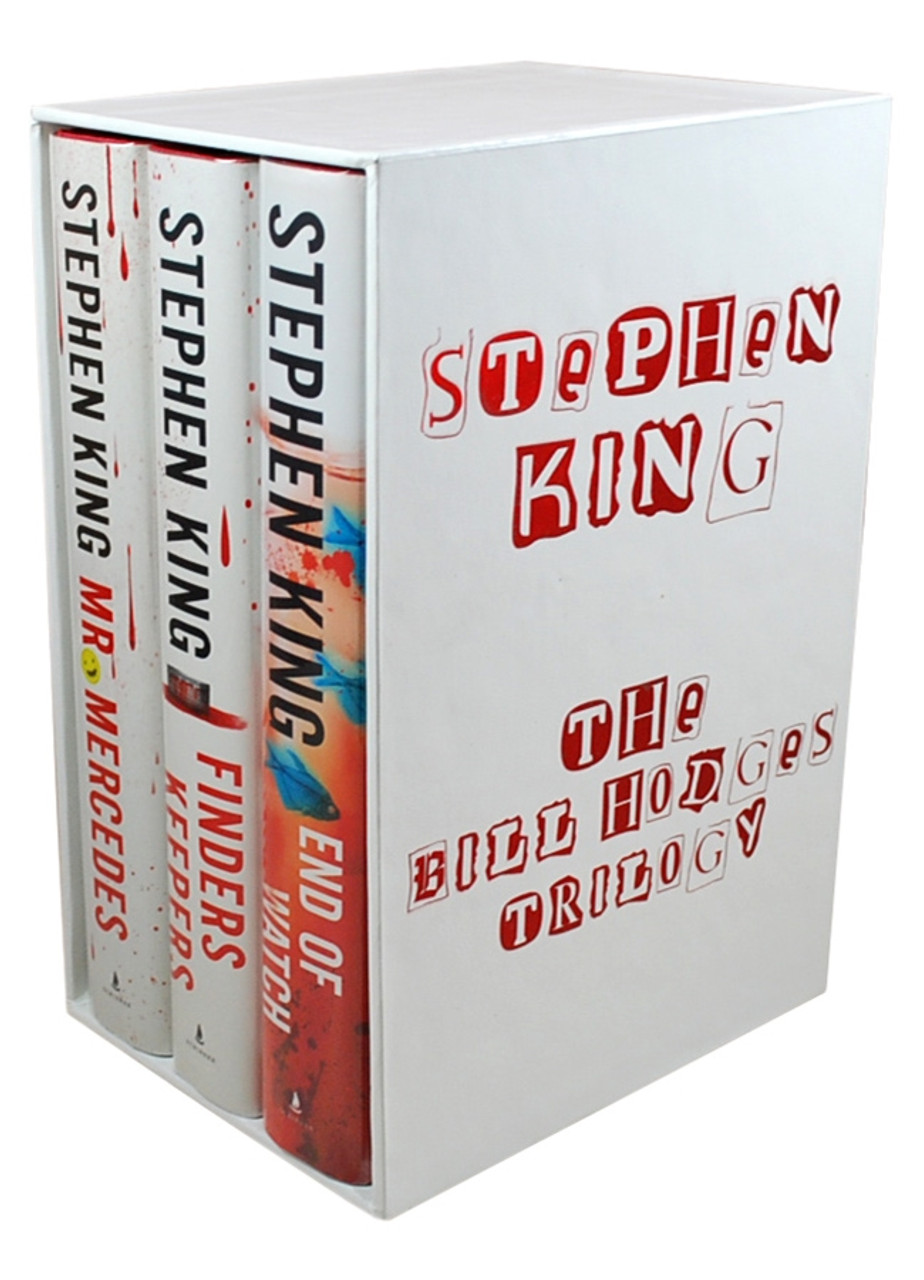 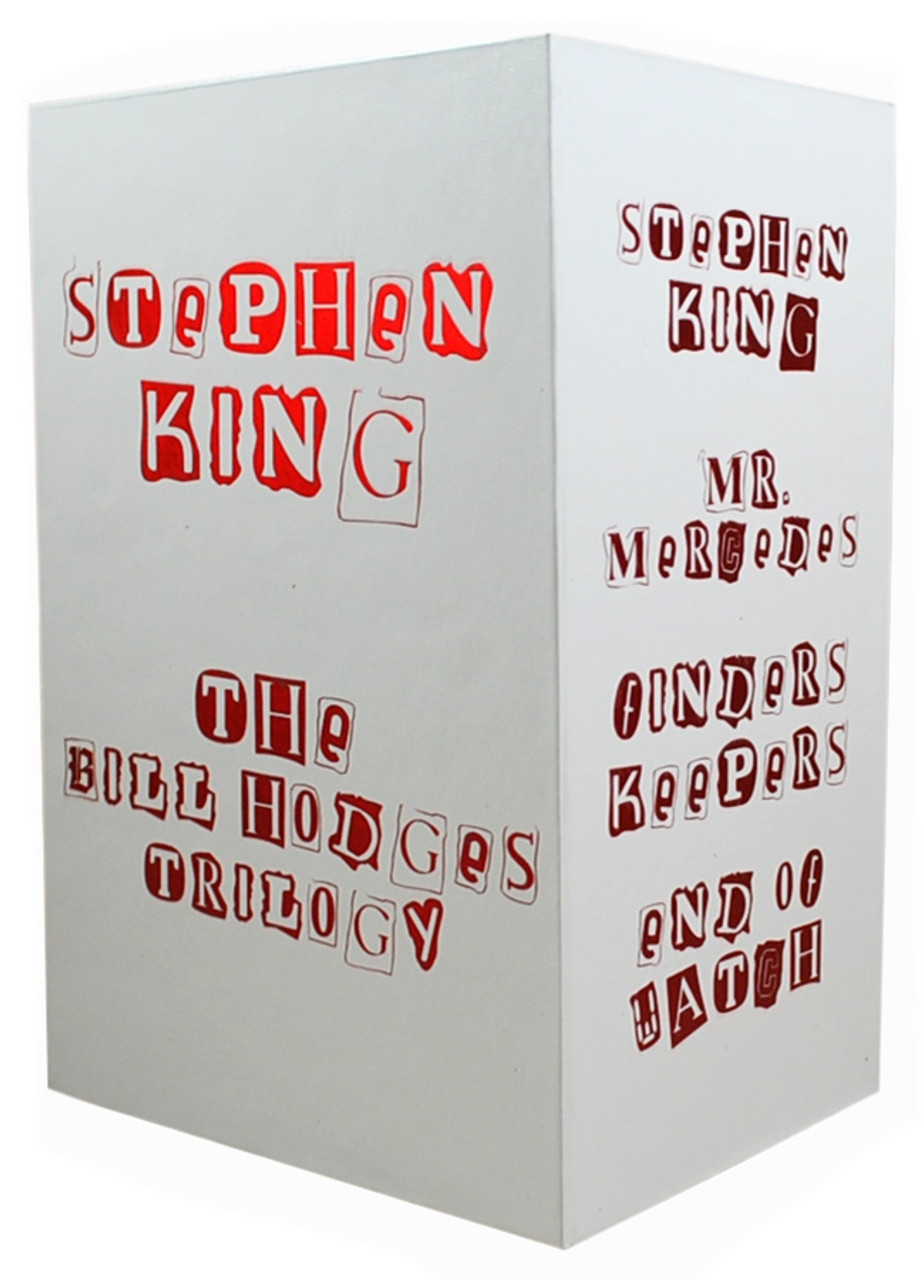 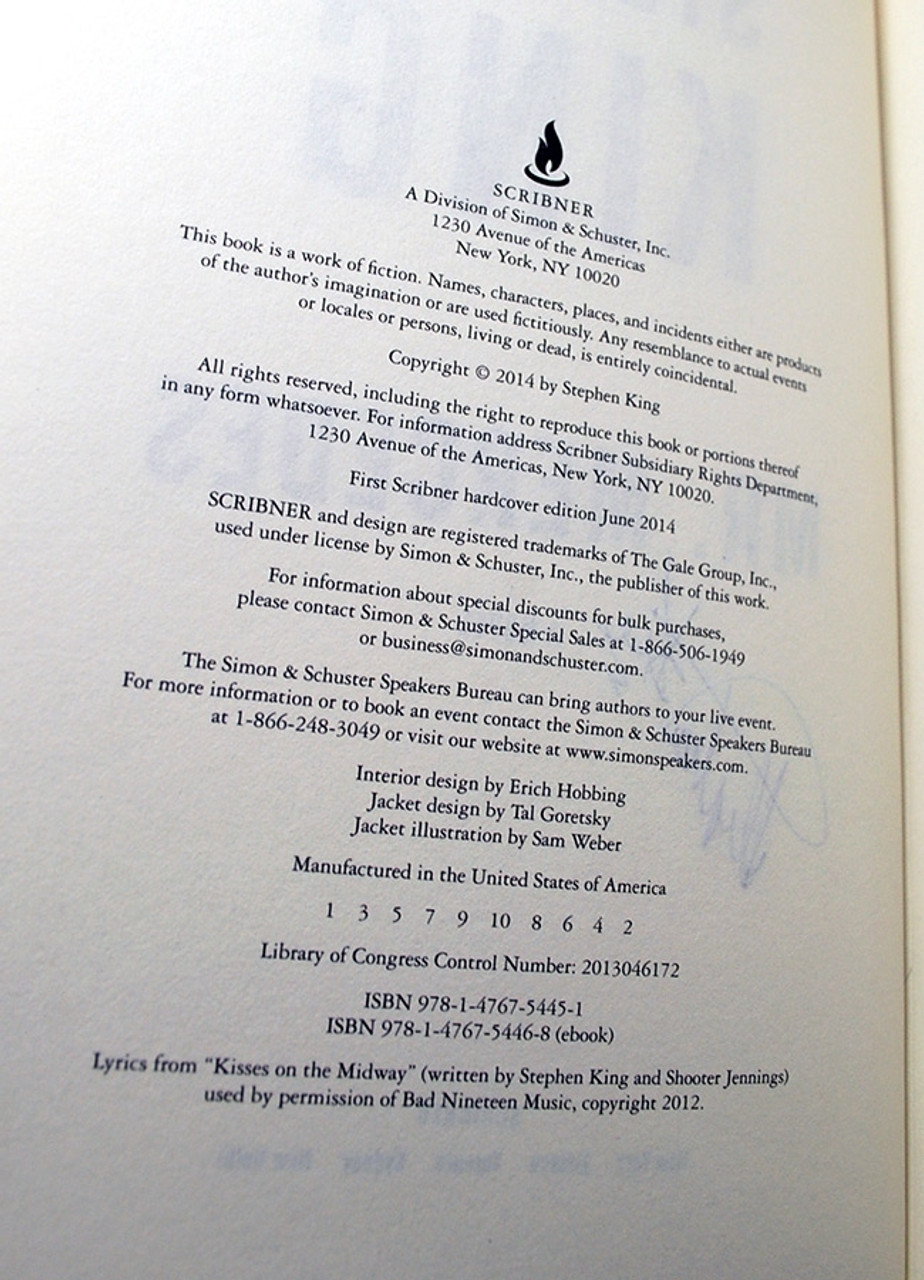 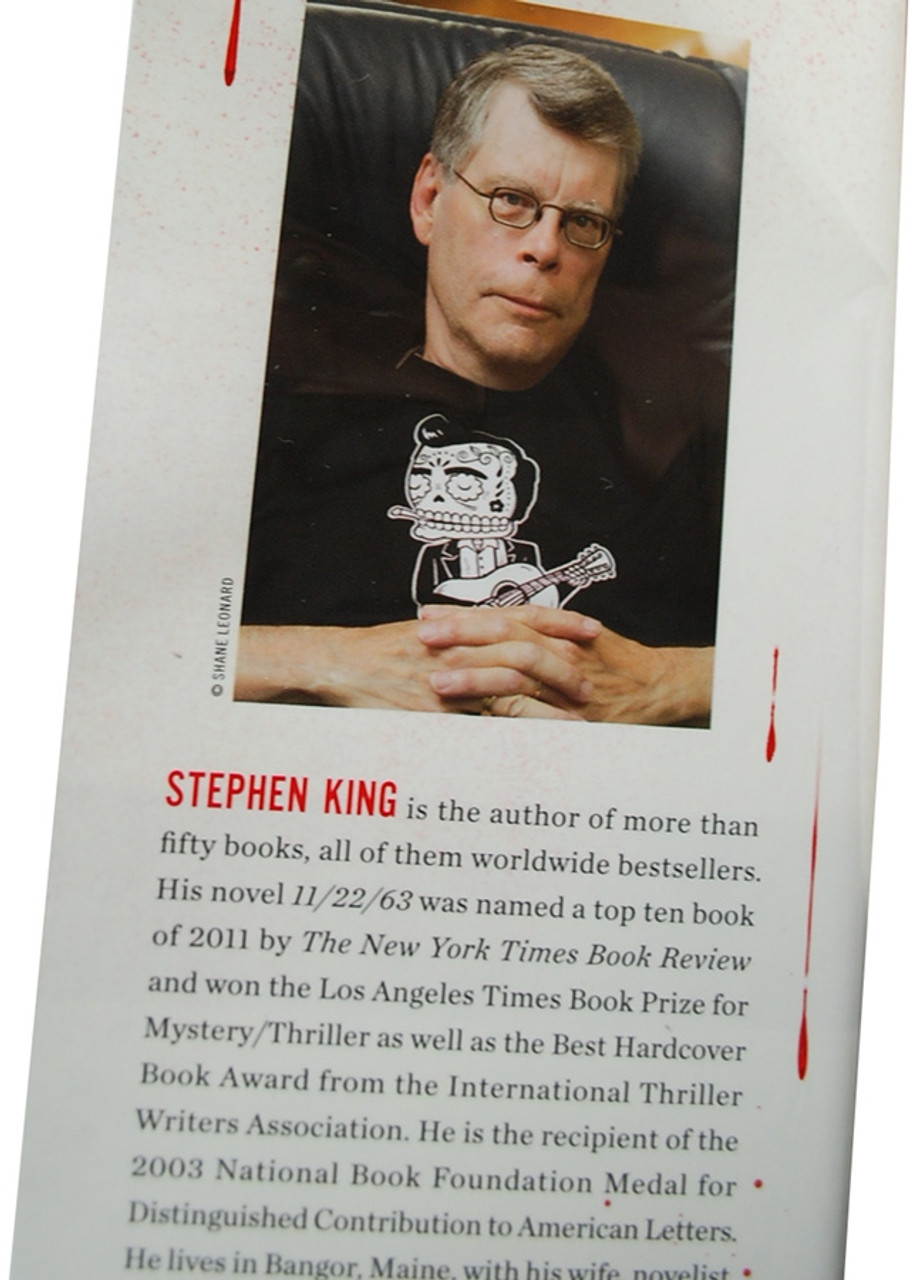 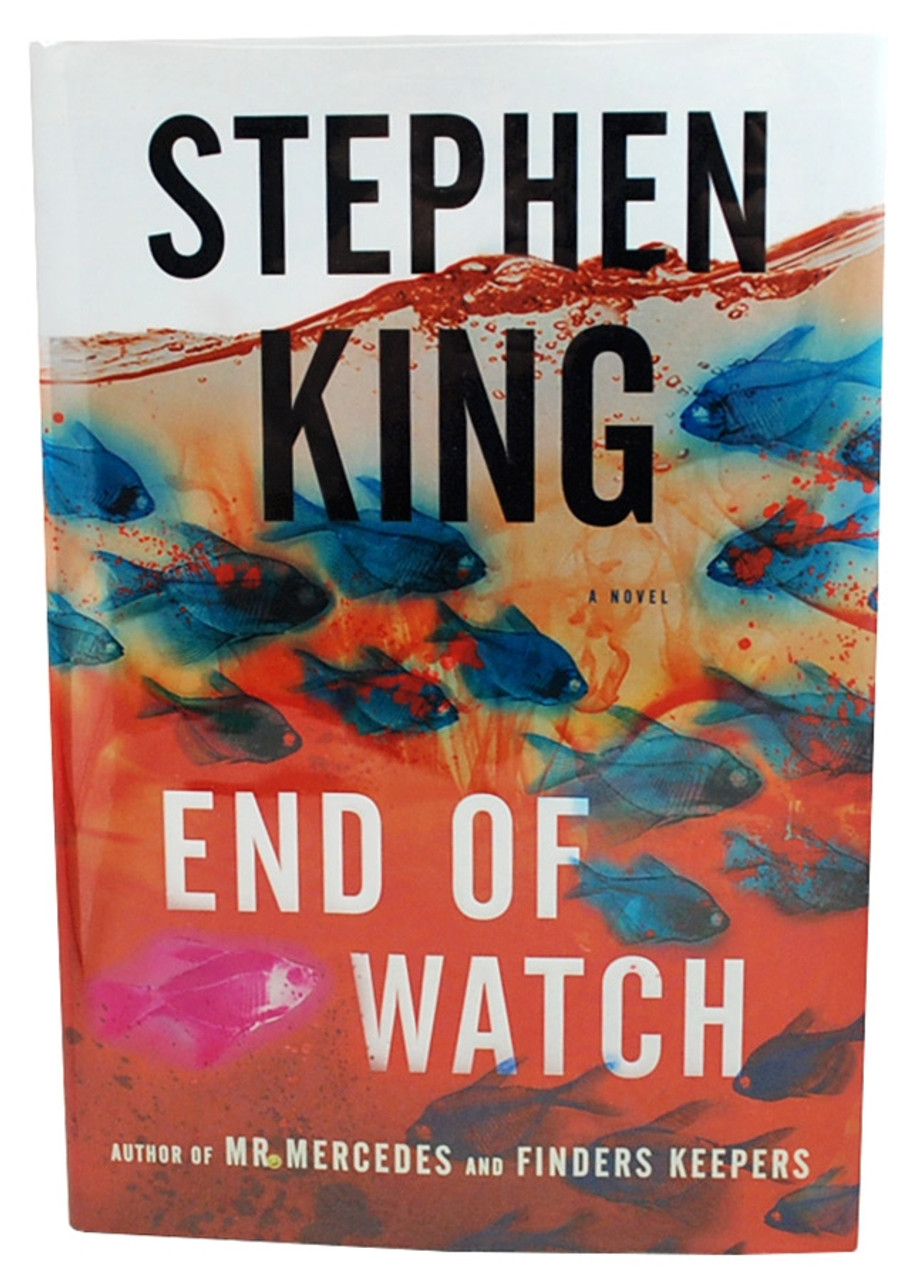 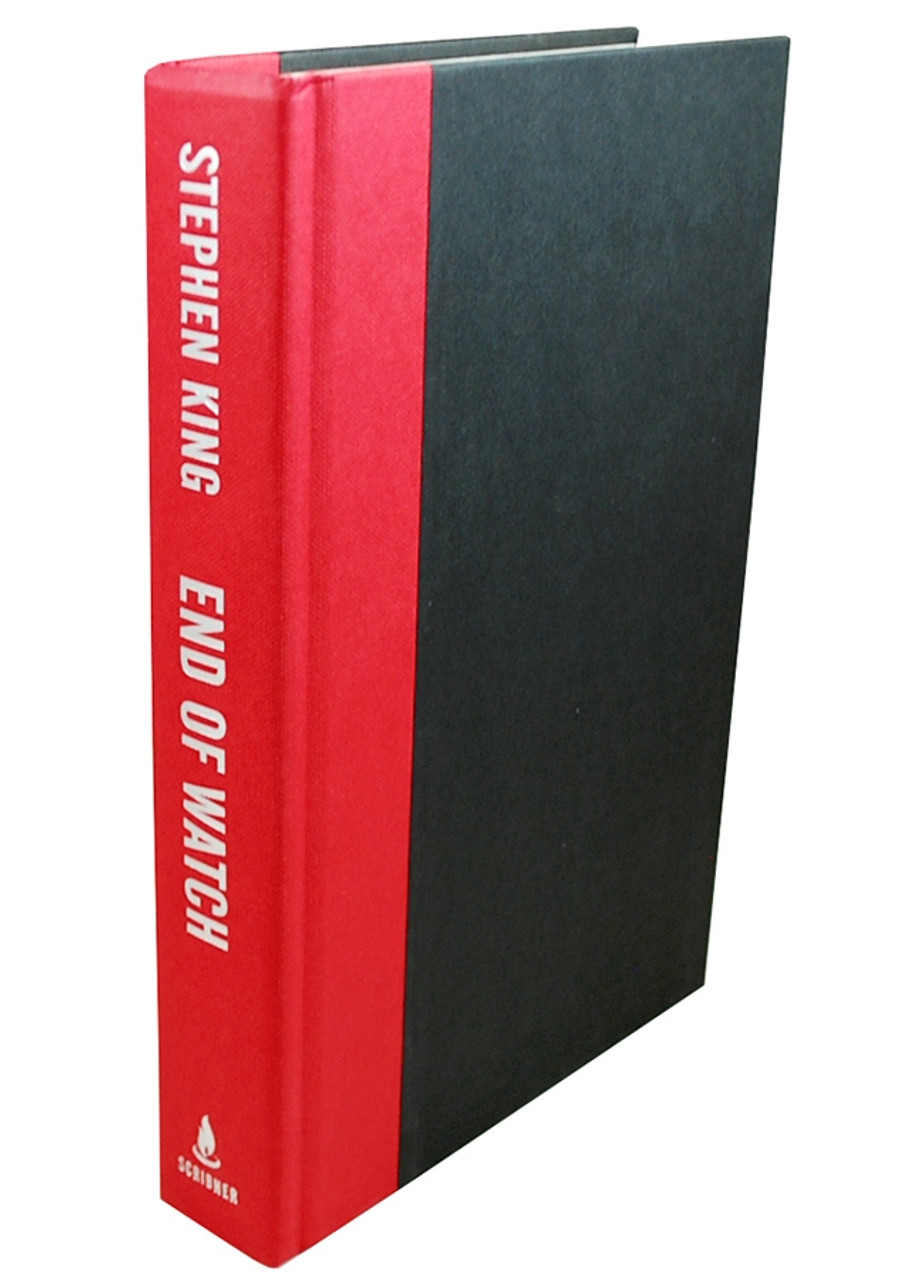 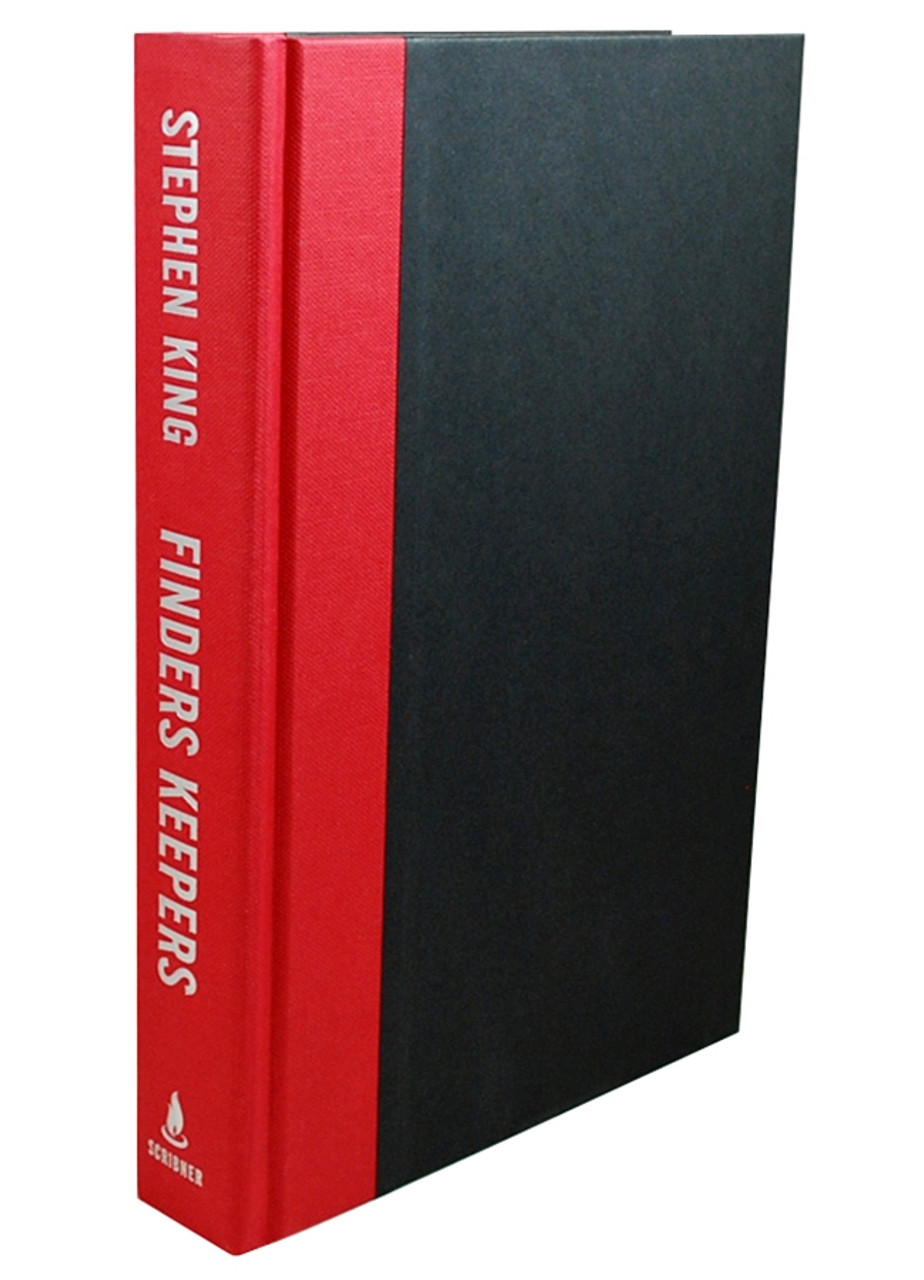 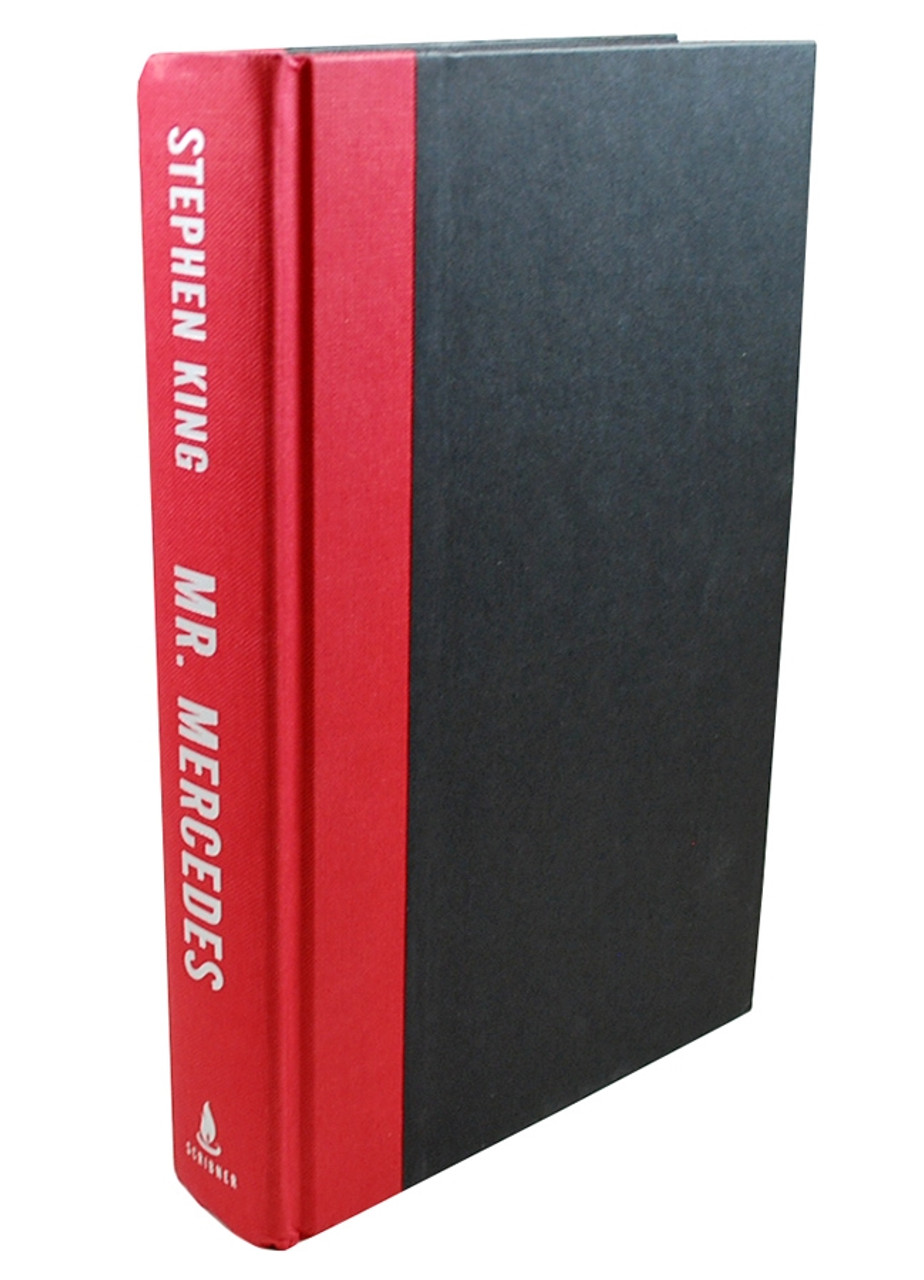 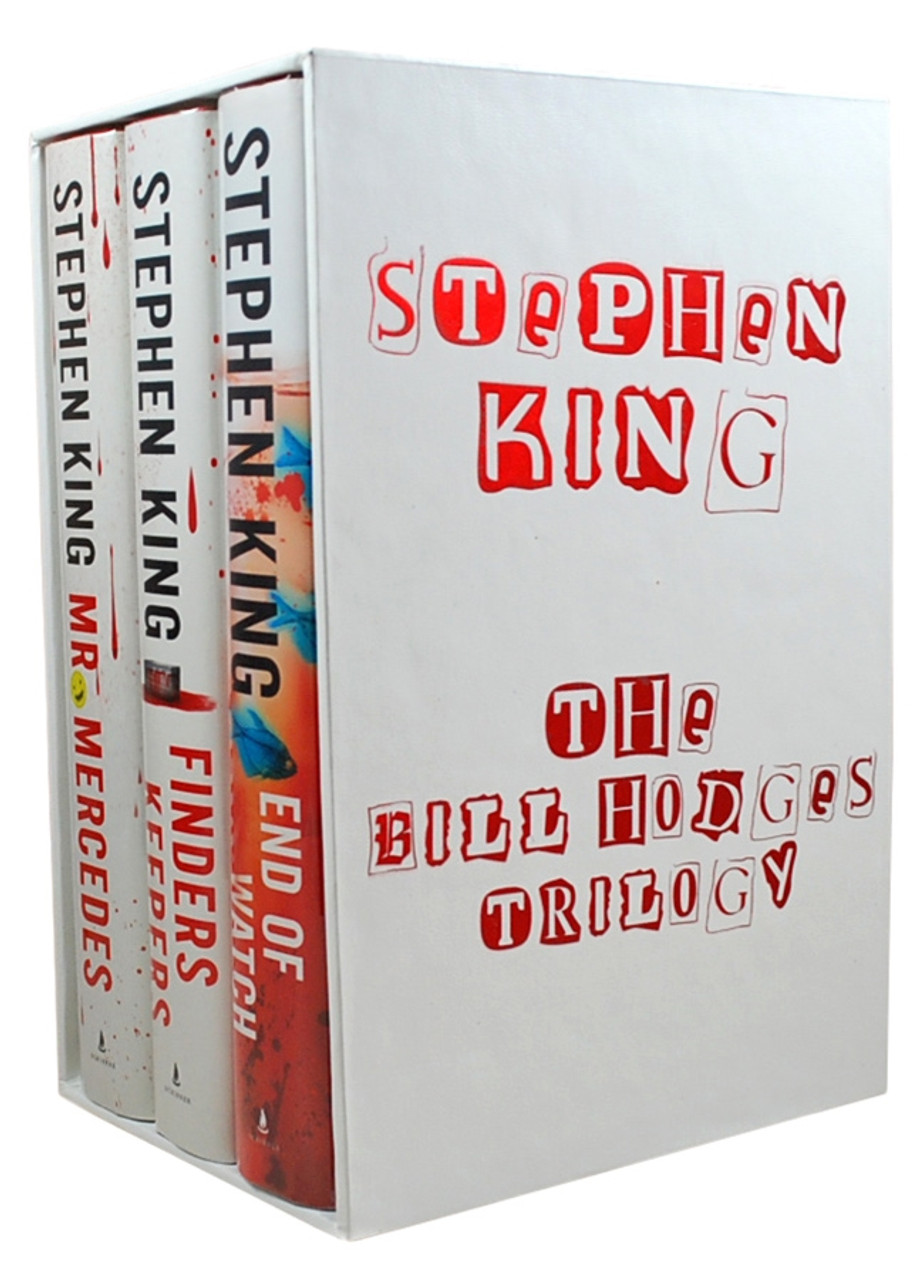 Personally signed by Stephen King directly onto the title page!

These are the original Scribner First Edition publications with the first edition copyright dates and not the updated set editions. The books are each in FINE & UNREAD condition. The dust jackets are NEW & covered in an archival quality clear Brodart acid-free protector. The slipcase is also NEW. Each novel has been personally signed by Stephen King directly onto the title page of the book. Custom design and fabrication of the slipcase to house the three novels. Includes COA from the bookseller. A rare find.

Scribner (June 3, 2014). Stephen King "Mr. Mercedes" Signed First Edition, First Printing. No formal book signing event for this novel. A fine copy without any discernible flaws. The dust-jacket is now protected in a new archival Mylar sleeve. A rare gift for the serious Stephen King collector. Fine/Fine with an archival Brodart protective sleeve on the dust-jacket.

Scribner (June 2, 2015). Stephen King "Finders Keepers" Signed First Edition, First Printing. Stephen King personally signed the book on July 12th in Bridgton, Maine. This was the only signing event for this novel and was limited to only 500 tickets. Hardcover: 448 page. ISBN-13: 978-1501100079. A fine copy without any discernible flaws. The dust-jacket is now protected in a new archival Mylar sleeve. Fine/Fine with an archival Brodart protective sleeve on the dust-jacket.

Scribner (June 2016). Stephen King "End Of Watch Signed First Edition, First Printing. Personally signed by Stephen King directly onto the title page of the book. A fine copy without any discernible flaws. The dust-jacket is now protected in a new archival Mylar sleeve. Fine/Fine with an archival Brodart protective sleeve on the dust-jacket.

All books have the Correct First Edition - First Printing Markings:

A masterful, intensely suspenseful novel about a reader whose obsession with a reclusive writer goes far too far—a book about the power of storytelling, starring the same trio of unlikely and winning heroes King introduced in Mr. Mercedes.

"Wake up genius." So begins King’s instantly riveting story about a vengeful reader. The genius is John Rothstein, an iconic author who created a famous character, Jimmy Gold, but who hasn’t published a book for decades. Morris Bellamy is livid, not just because Rothstein has stopped providing books, but because the nonconformist Jimmy Gold has sold out for a career in advertising. Morris kills Rothstein and empties his safe of cash, yes, but the real treasure is a trove of notebooks containing at least one more Gold novel.

Morris hides the money and the notebooks, and then he is locked away for another crime. Decades later, a boy named Pete Saubers finds the treasure, and now it is Pete and his family that Bill Hodges, Holly Gibney, and Jerome Robinson must rescue from the ever-more deranged and vengeful Morris when he’s released from prison after thirty-five years.

Not since Misery has King played with the notion of a reader whose obsession with a writer gets dangerous. Finders Keepers is spectacular, heart-pounding suspense, but it is also King writing about how literature shapes a life—for good, for bad, forever.

“[A] taut thriller about the thin line separating fandom from fanaticism…Bellamy is one of King’s creepiest creations—a literate and intelligent character whom any passionate reader will both identify with and be repelled by. His relentless pursuit of a treasure that his twisted thinking has determined is rightfully his generates the nail biting suspense that’s the hallmark of King’s best work. A sharp closing twist suggests Hodges will be back.” (Publishers Weekly.

“King’s many, many fans will want this, especially those who enjoyed Misery, but the second volume in King’s projected trilogy will appeal to anyone who enjoys suspense and action, or anyone who finds enlightenment in reading about the internal struggle between right and wrong. It’s not necessary to have read the previous book to enjoy this one.” (Library Journal)

In a high-suspense race against time, three of the most unlikely heroes Stephen King has ever created try to stop a lone killer from murdering thousands. “Mr. Mercedes is a rich, resonant, exceptionally readable accomplishment by a man who can write in whatever genre he chooses” (The Washington Post).

The stolen Mercedes emerges from the pre-dawn fog and plows through a crowd of men and women on line for a job fair in a distressed American city. Then the lone driver backs up, charges again, and speeds off, leaving eight dead and more wounded. The case goes unsolved and ex-cop Bill Hodges is out of hope when he gets a letter from a man who loved the feel of death under the Mercedes’s wheels…

Brady Hartsfield wants that rush again, but this time he’s going big, with an attack that would take down thousands—unless Hodges and two new unusual allies he picks up along the way can throw a wrench in Hartsfield’s diabolical plans. Stephen King takes off on a “nerve-shredding, pulse-pounding race against time” (Fort Worth Star-Telegram) with this acclaimed #1 bestselling thriller.

“Stephen King’s superb new stay-up-all-night thriller is a sly tale of literary obsession that recalls the themes of his classic 1987 novel Misery” (The Washington Post)—the #1 New York Times bestseller about the power of storytelling, starring the same trio of unlikely and winning heroes Stephen King introduced in Mr. Mercedes.

“Wake up, genius.” So announces deranged fan Morris Bellamy to iconic author John Rothstein, who once created the famous character Jimmy Gold and hasn’t released anything since. Morris is livid, not just because his favorite writer has stopped publishing, but because Jimmy Gold ended up as a sellout. Morris kills his idol and empties his safe of cash, but the real haul is a collection of notebooks containing John Rothstein’s unpublished work...including at least one more Jimmy Gold novel. Morris hides everything away—the money and the manuscripts no one but Gold ever saw—before being locked up for another horrific crime. But upon Morris’s release thirty-five years later, he’s about to discover that teenager Pete Saubers has already found the stolen treasure—and no one but former police detective Bill Hodges, along with his trusted associates Holly Gibney and Jerome Robinson, stands in the way of his vengeance...

Not since Misery has Stephen King played with the notion of a reader and murderous obsession, filled with “nail biting suspense that’s the hallmark of [his] best work” (Publishers Weekly).

For nearly six years, in Room 217 of the Lakes Region Traumatic Brain Injury Clinic, Brady Hartsfield has been in a persistent vegetative state. A complete recovery seems unlikely for the insane perpetrator of the “Mercedes Massacre,” in which eight people were killed and many more maimed for life. But behind the vacant stare, Brady is very much awake and aware, having been pumped full of experimental drugs...scheming, biding his time as he trains himself to take full advantage of the deadly new powers that allow him to wreak unimaginable havoc without ever leaving his hospital room. Brady Hartsfield is about to embark on a new reign of terror against thousands of innocents, hell-bent on taking revenge against anyone who crossed his path—with retired police detective Bill Hodges at the very top of that long list....

Lifetime Guarantee of Signature Authenticity. Each one of the first printings of the Bill Hodges Trilogy has been personally signed by Stephen King directly onto the title page of the book. The autographs are not facsimiles, stamps, or auto-pens. Includes three COAs, one for each book.
VERY FINE GUARANTEED. Each book is a wonderful bright clean copy free of any markings, writings, or stamps. Sharp corners that are not bumped. Tight and square spine. Unread books. No attached bookplates or indication of any removed.

Publisher:
Scribner 2014, 2015, 2016
Edition:
Signed First Edition
Binding:
Hardcover with dust-jackets
Illustrator:
see product description
Dimensions:
9 "x 6" x 1.5"
Signature Authenticity:
Lifetime Guarantee of Signature Authenticity. Each one of the first printings of the Bill Hodges Trilogy has been personally signed by Stephen King. The autographs are not facsimiles, stamps, or auto-pens. Includes three COAs, one for each book.