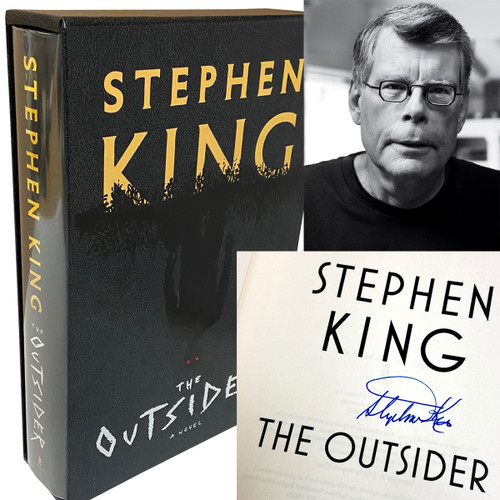 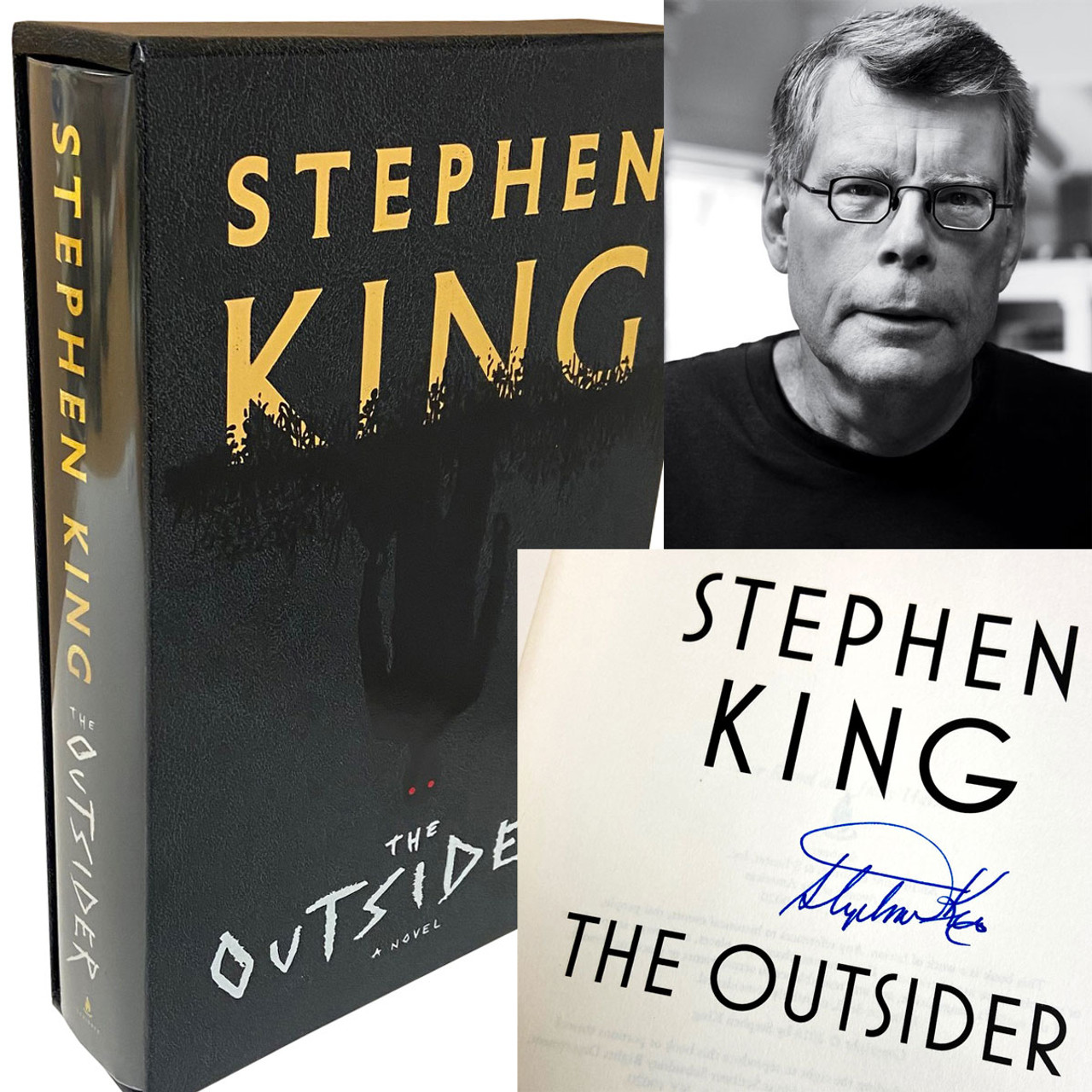 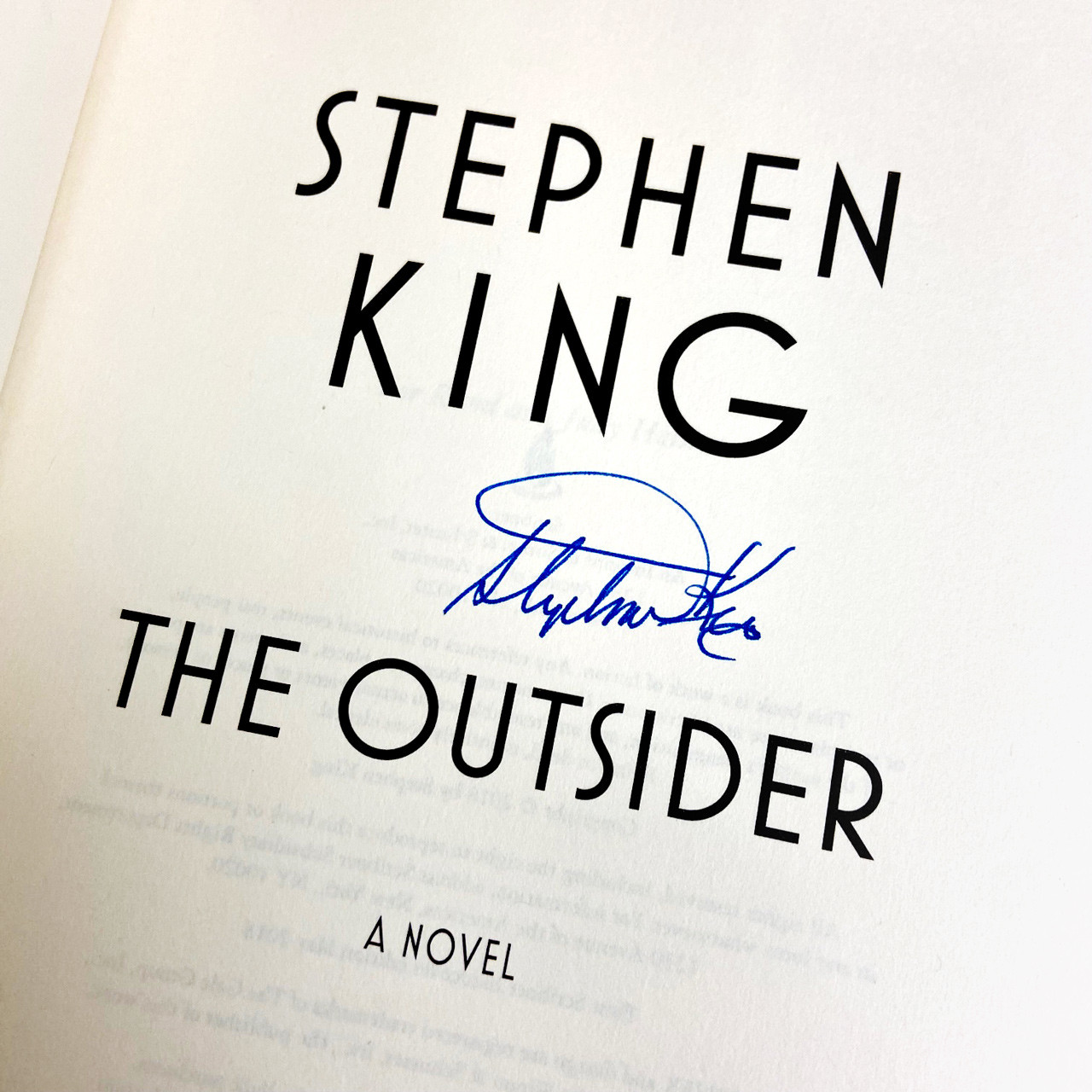 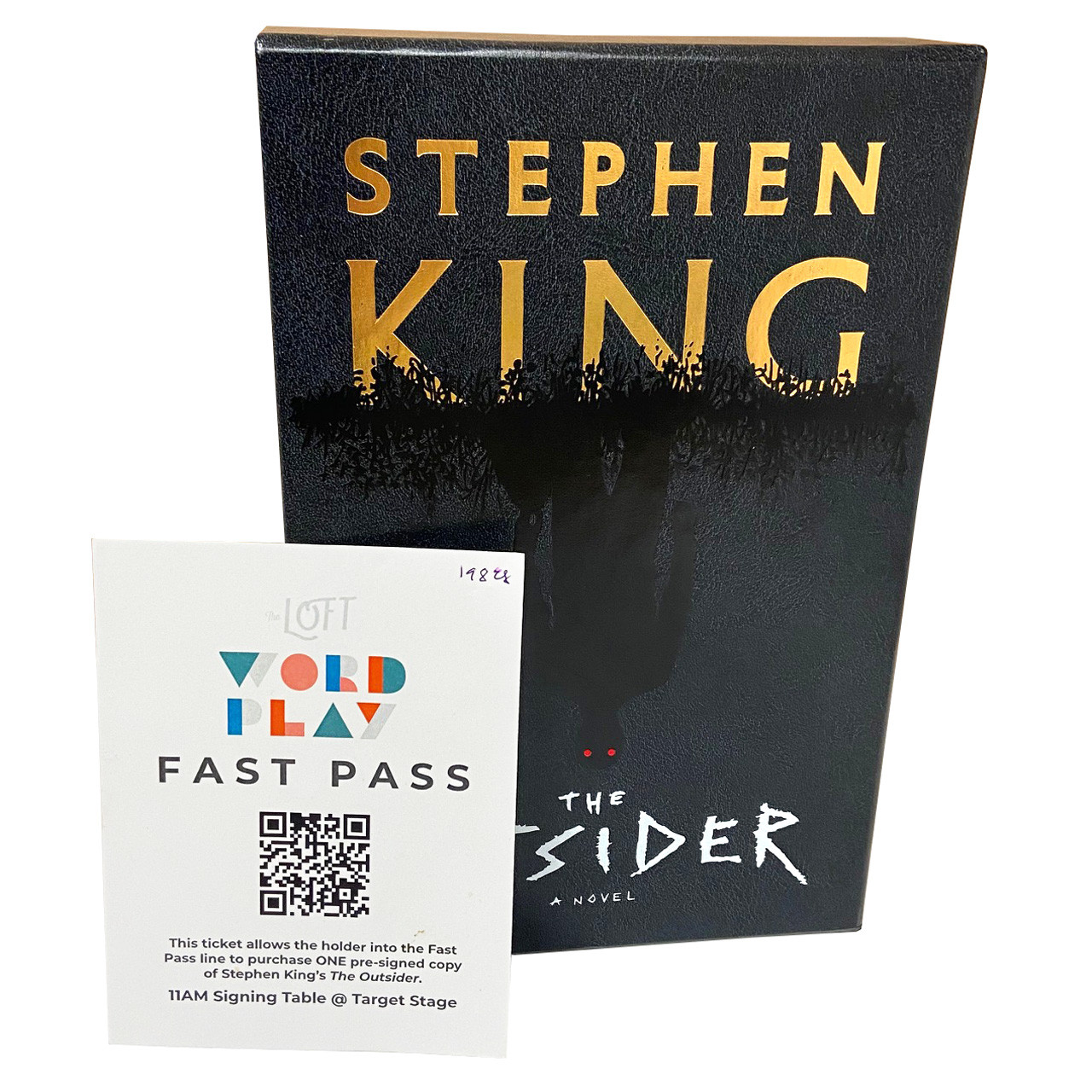 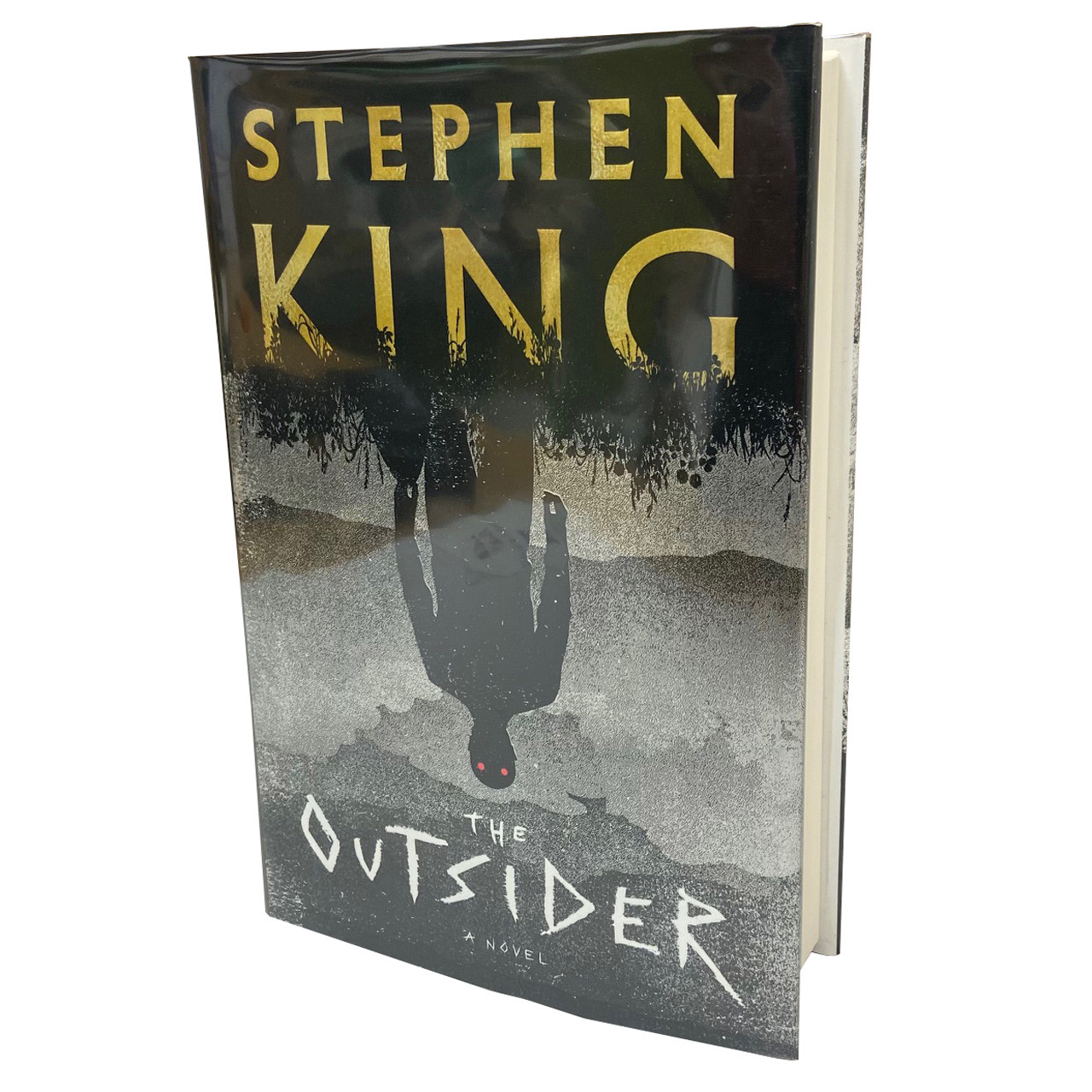 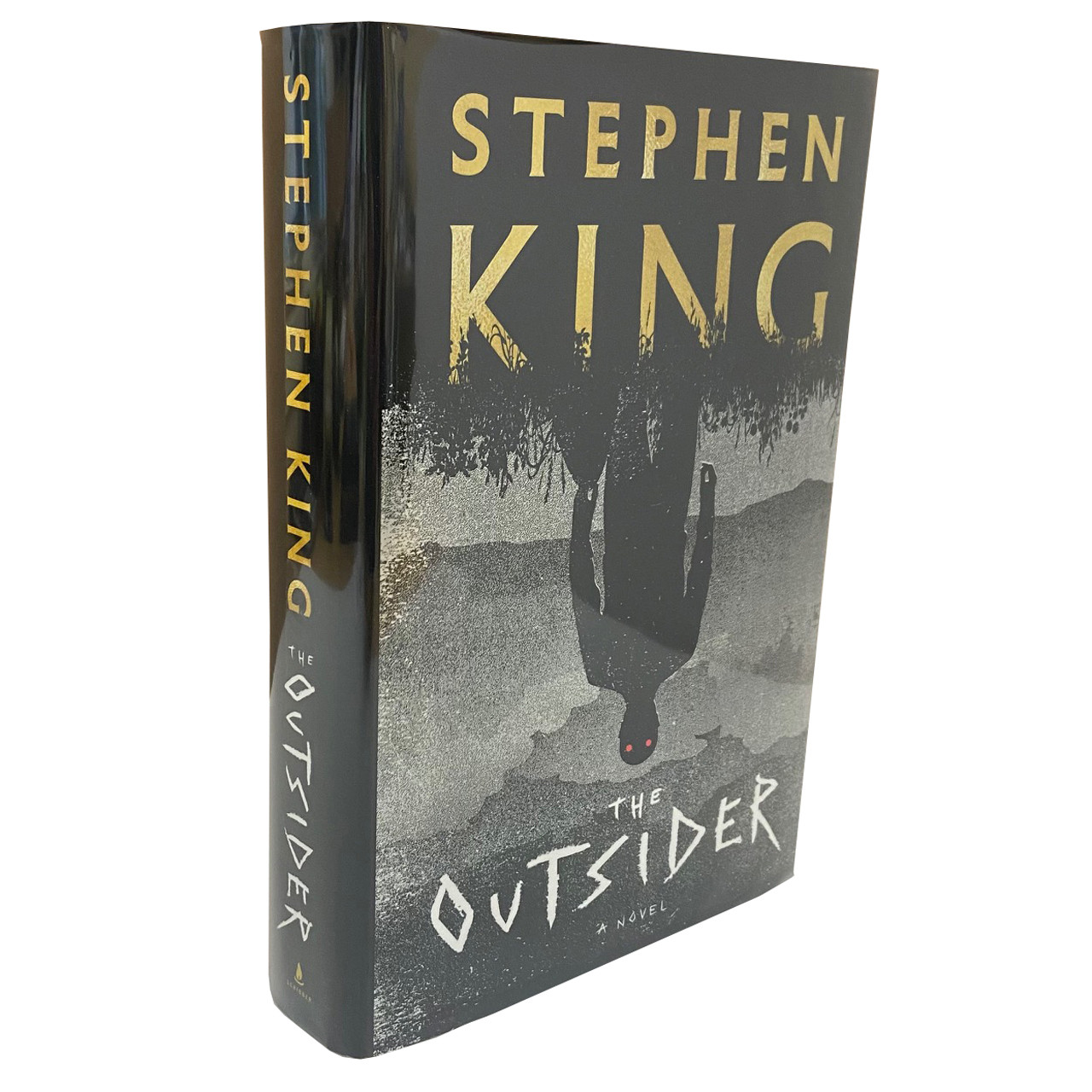 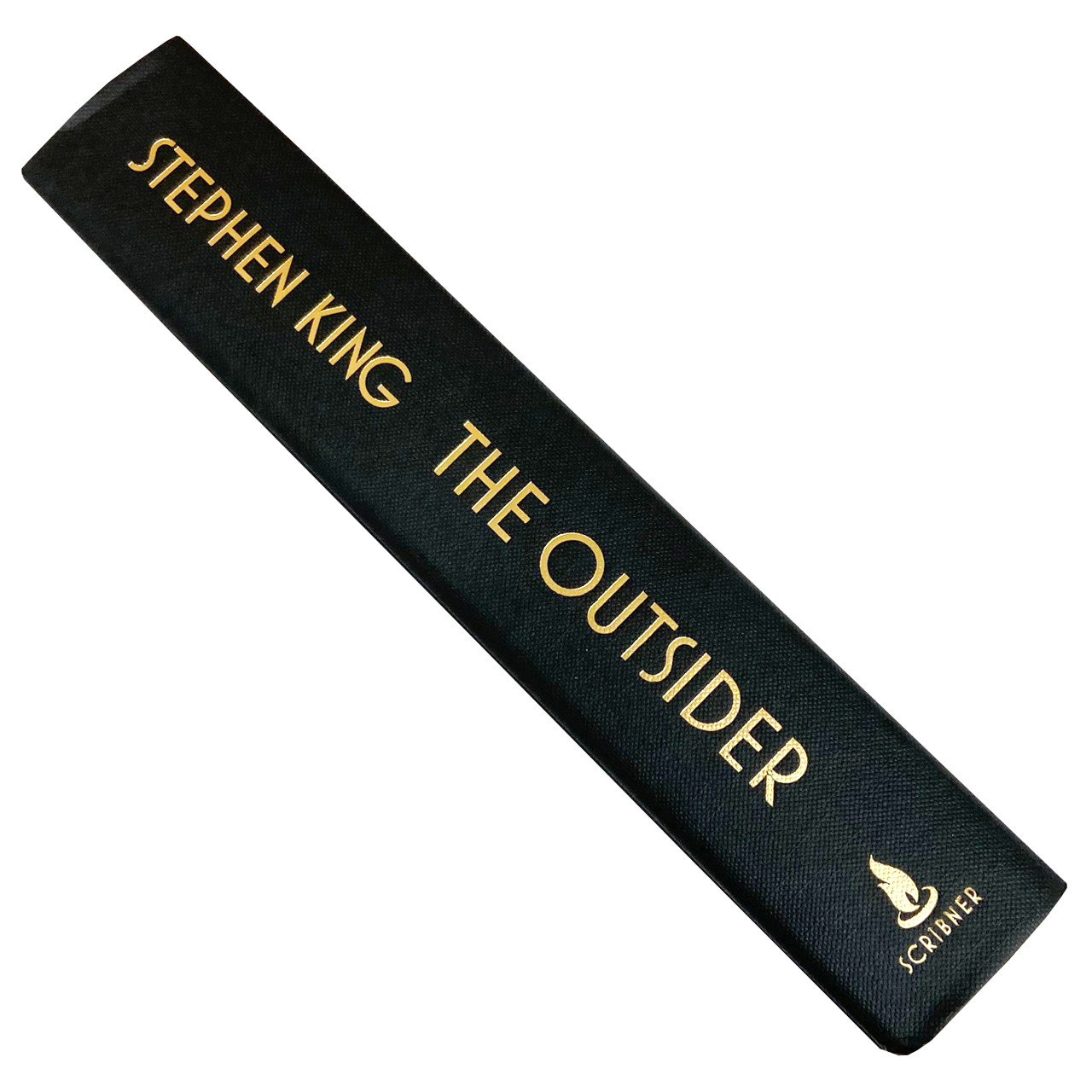 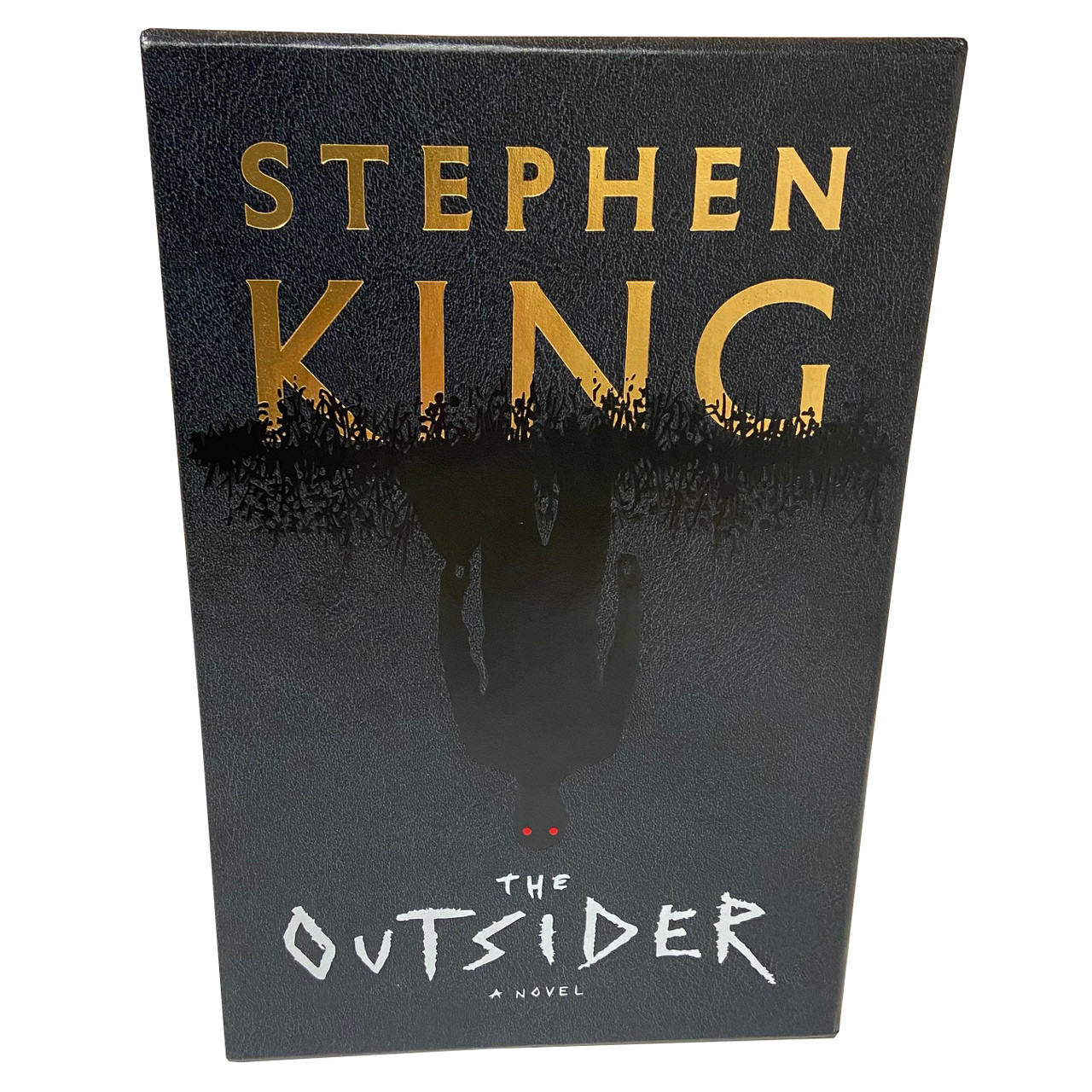 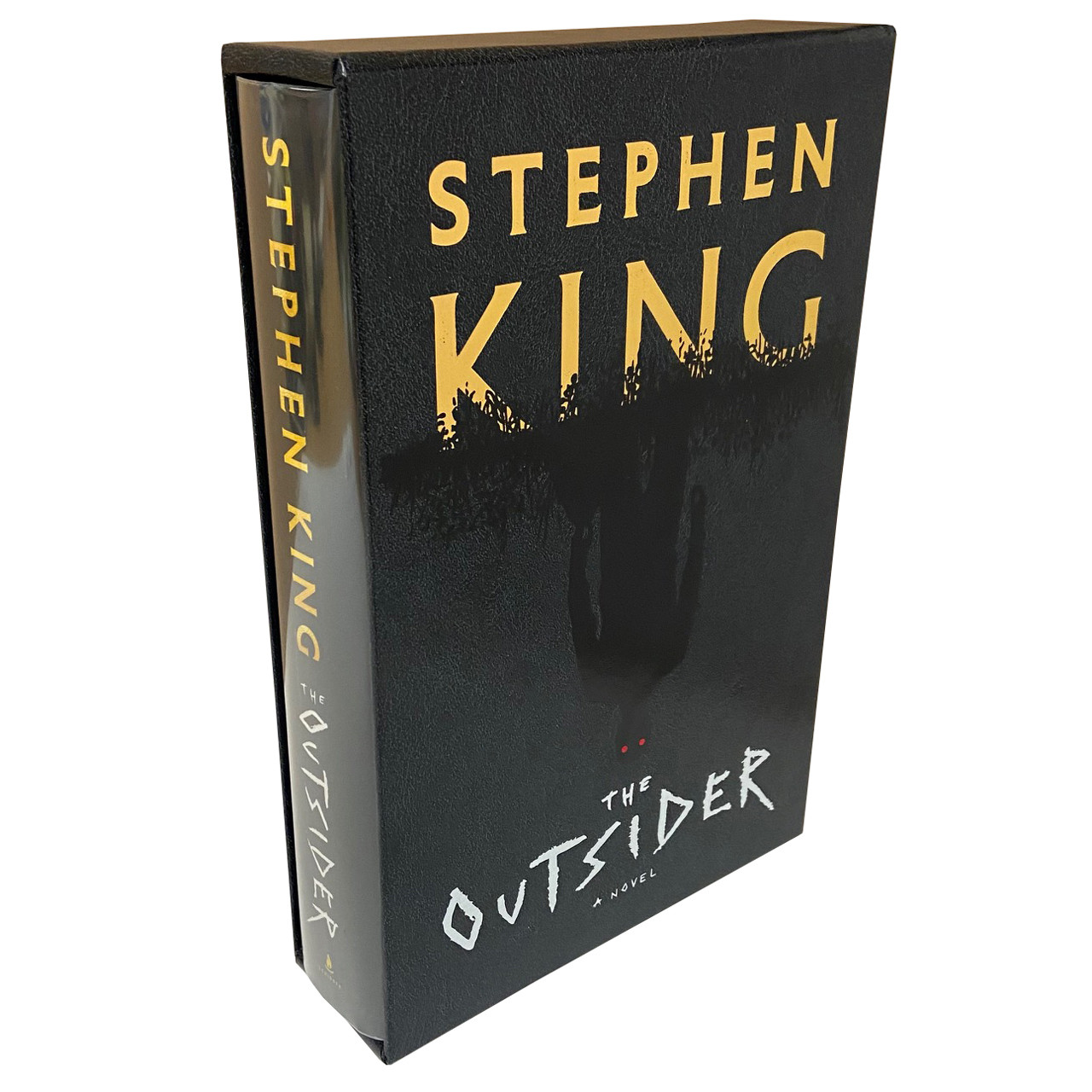 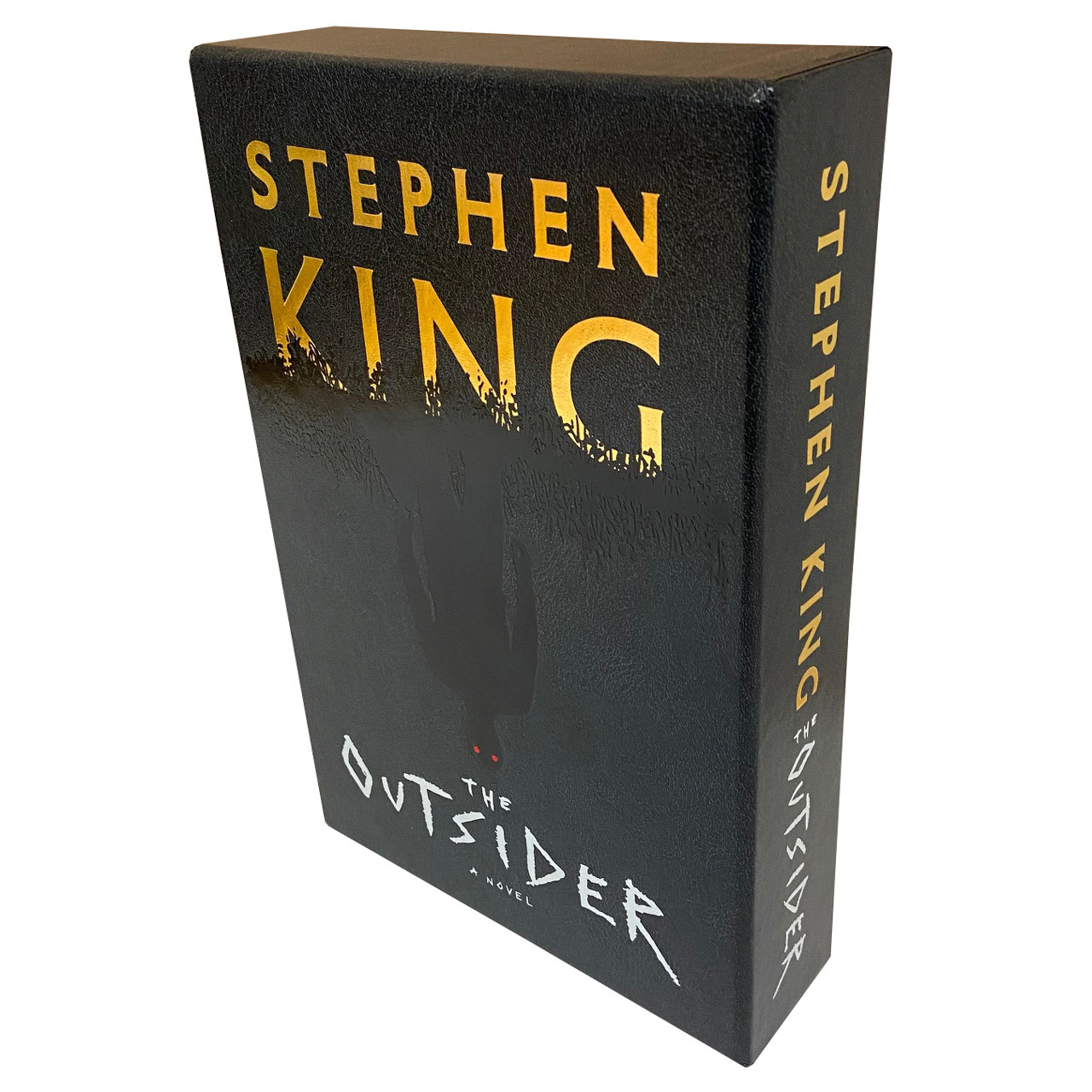 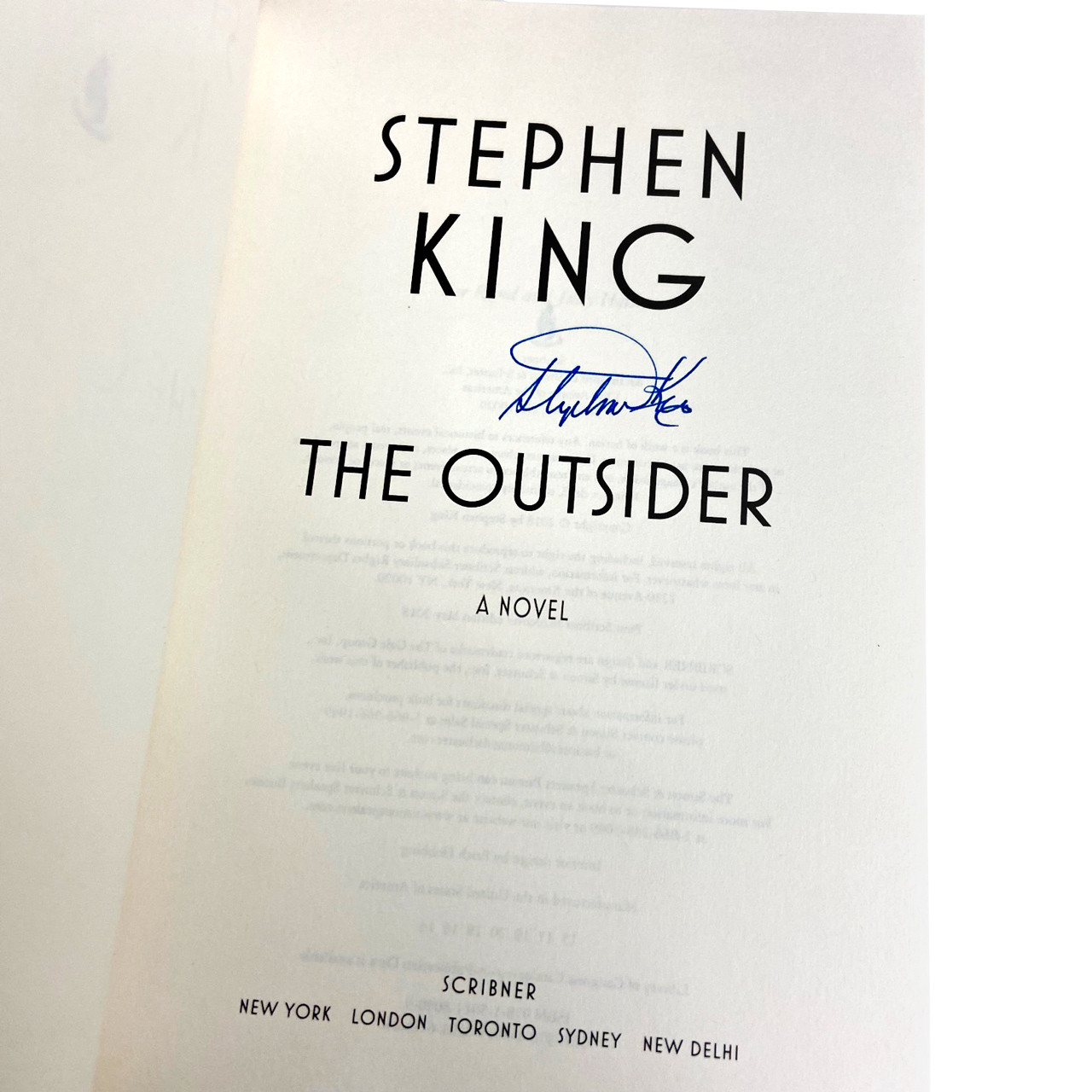 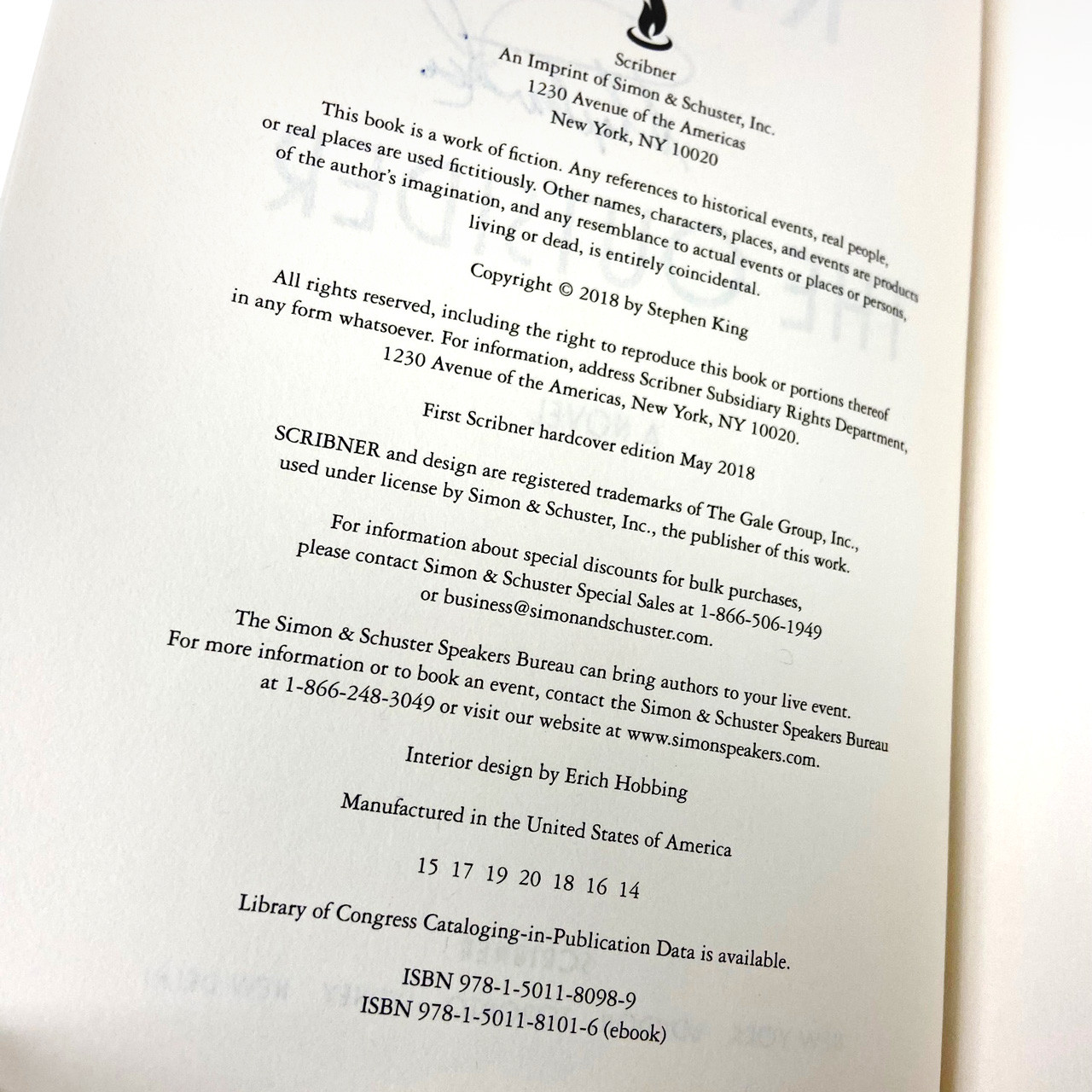 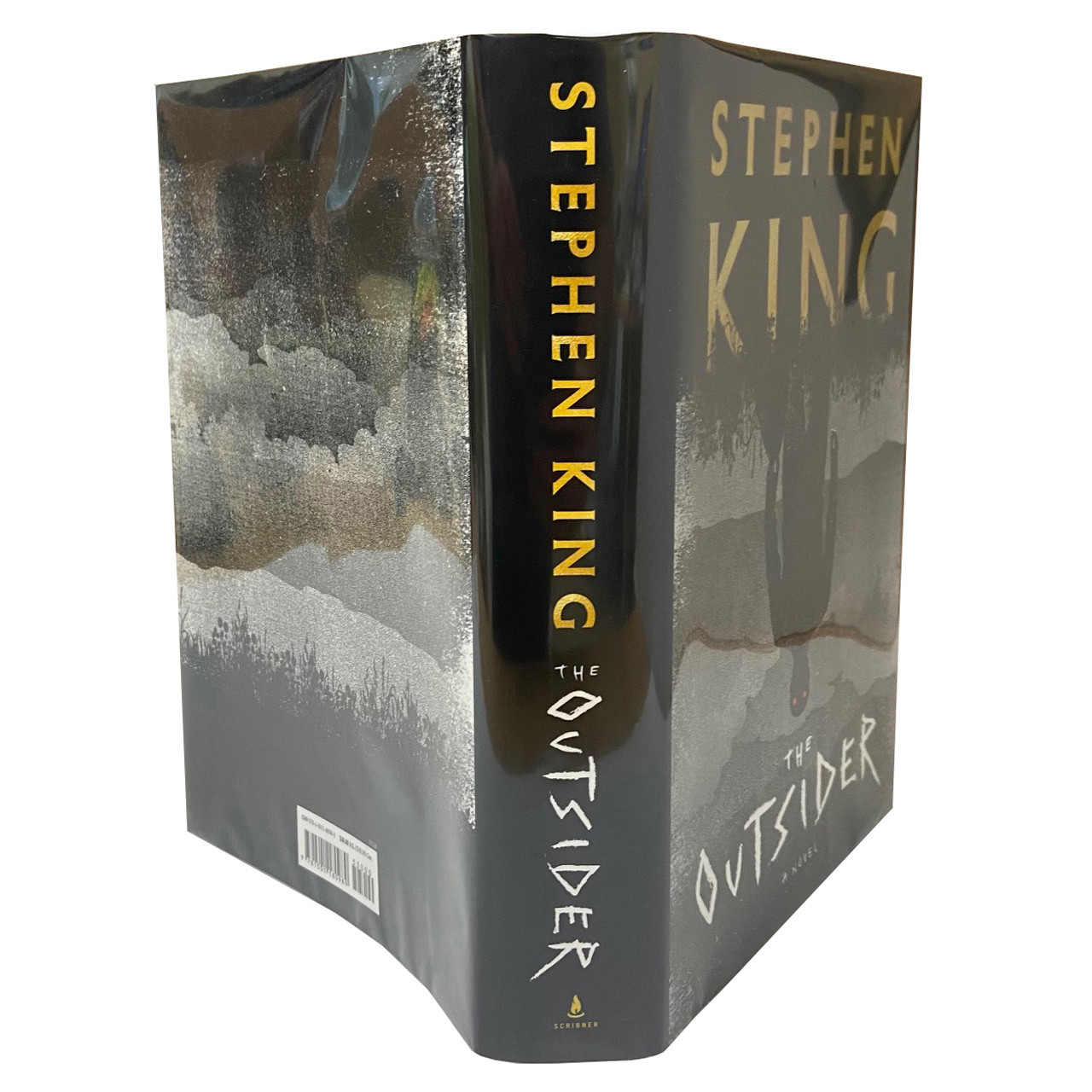 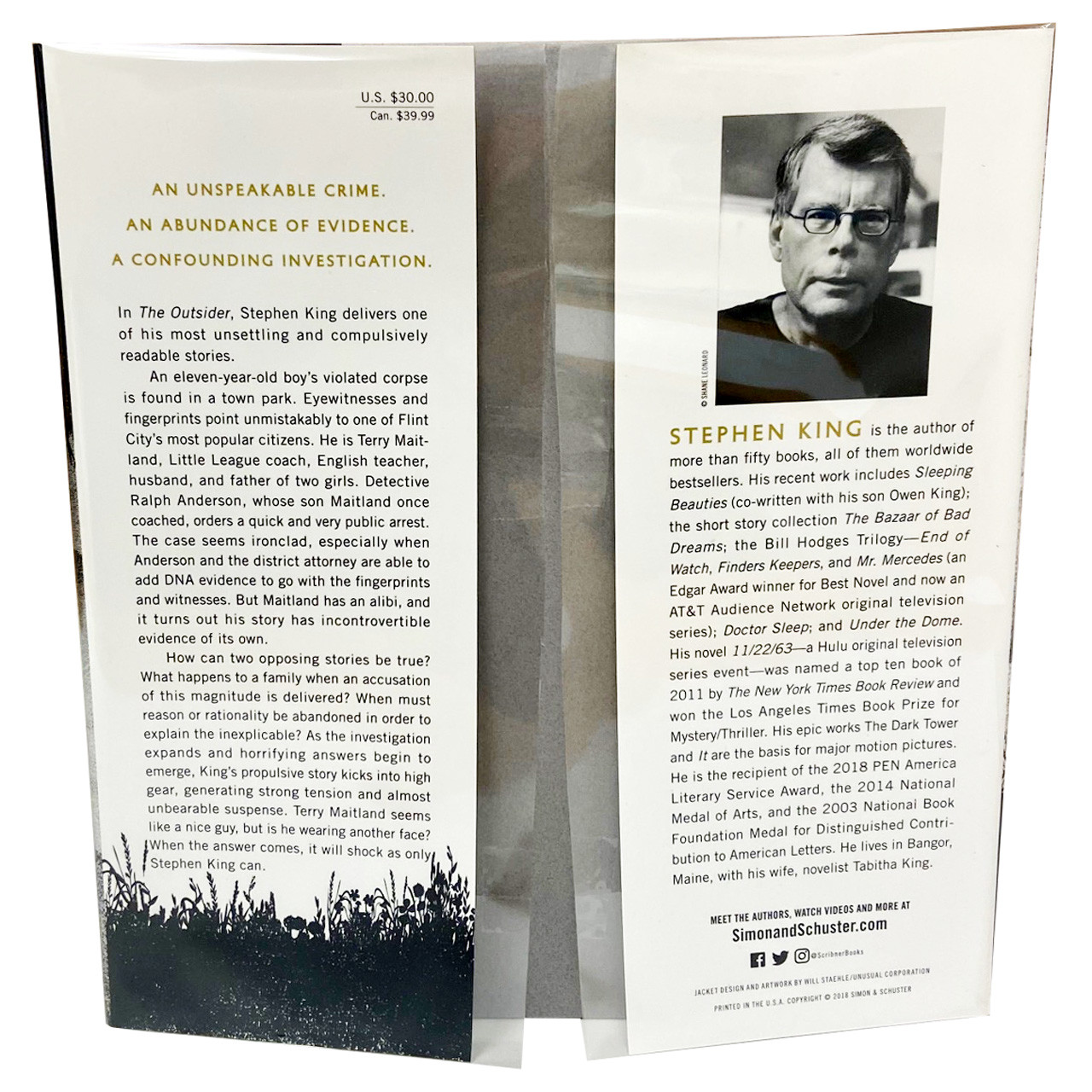 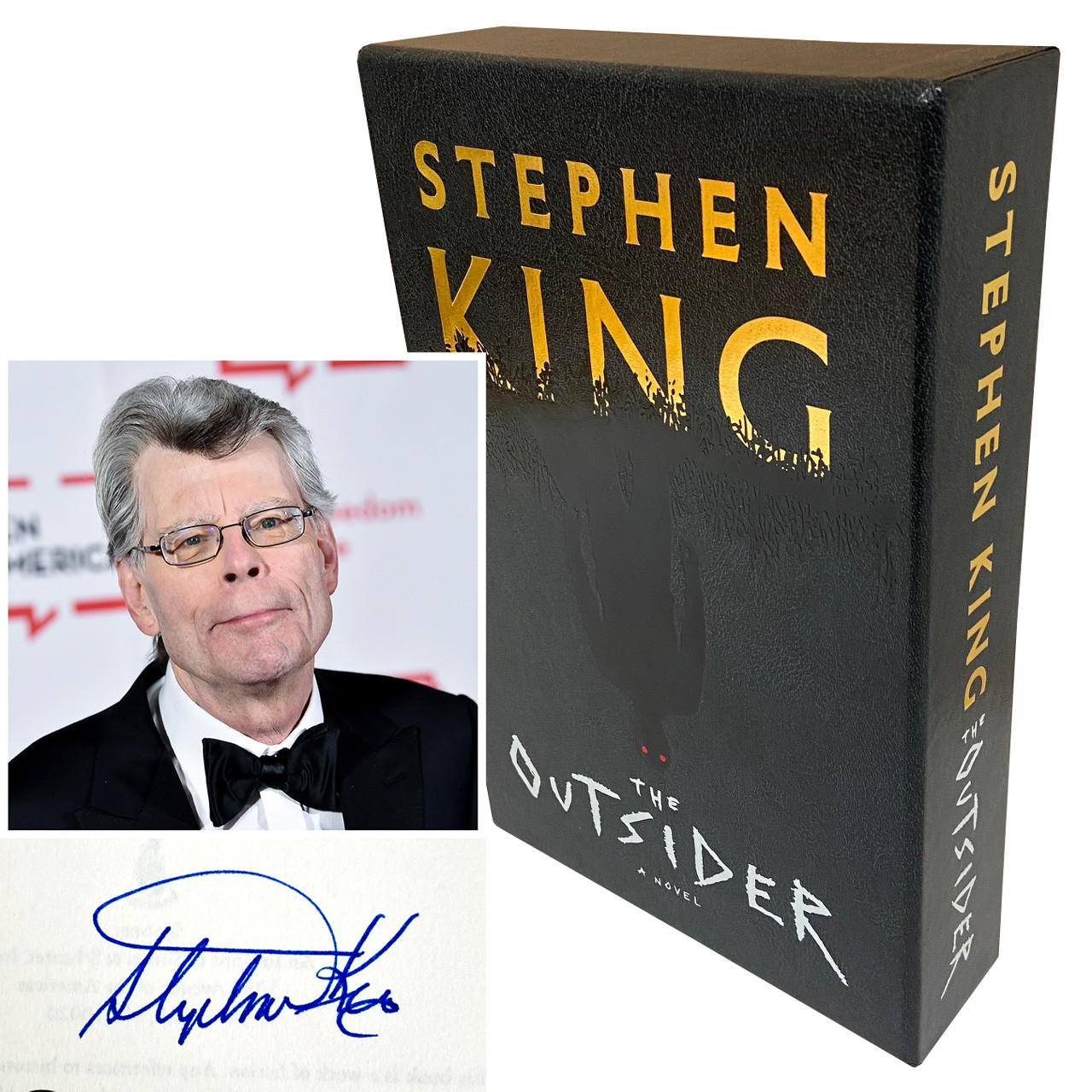 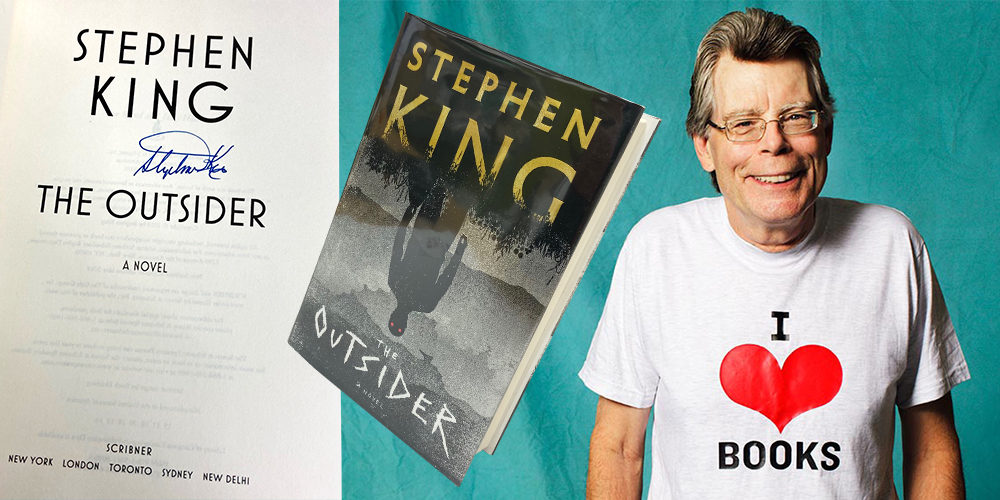 Scribner 2018.  Stephen King "The Outsider" Signed First Edition, Later 14th printing.  Personally signed by the author Stephen King directly onto the title page of the book. Hardcover book with dust-jacket. Signed at the 2019 Wordplay Book Festival in Minneapolis, MN. The signed books from this event were all later printings. Includes bookseller issued COA and original event FAST PASS ticket for a signed copy of this novel.

Very Fine without any flaws.

"First Scribner hardcover edition May 2018" as stated on the copyright page.

Evil has many faces…maybe even yours in this #1 New York Times bestseller from master storyteller Stephen King.

An eleven-year-old boy’s violated corpse is discovered in a town park. Eyewitnesses and fingerprints point unmistakably to one of Flint City’s most popular citizens—Terry Maitland, Little League coach, English teacher, husband, and father of two girls. Detective Ralph Anderson, whose son Maitland once coached, orders a quick and very public arrest. Maitland has an alibi, but Anderson and the district attorney soon have DNA evidence to go with the fingerprints and witnesses. Their case seems ironclad.

As the investigation expands and horrifying details begin to emerge, King’s story kicks into high gear, generating strong tension and almost unbearable suspense. Terry Maitland seems like a nice guy, but is he wearing another face? When the answer comes, it will shock you as only Stephen King can.

Stephen Edwin King (born September 21, 1947) is an American author of horror, supernatural fiction, suspense, science fiction and fantasy. His books have sold more than 350 million copies, many of which have been adapted into feature films, miniseries, television series, and comic books. King has published 58 novels, including seven under the pen name Richard Bachman, and six non-fiction books. He has written around 200 short stories, most of which have been published in book collections.
Stephen King is the author of more than sixty books, all of them worldwide bestsellers. His recent work includes Fairy Tale, Billy Summers, If It Bleeds, The Institute, Elevation, The Outsider, Sleeping Beauties (cowritten with his son Owen King), and the Bill Hodges trilogy: End of Watch, Finders Keepers, and Mr. Mercedes (an Edgar Award winner for Best Novel and a television series streaming on Peacock). His novel 11/22/63 was named a top ten book of 2011 by The New York Times Book Review and won the Los Angeles Times Book Prize for Mystery/Thriller. His epic works The Dark Tower, It, Pet Sematary, and Doctor Sleep are the basis for major motion pictures, with It now the highest-grossing horror film of all time. He is the recipient of the 2020 Audio Publishers Association Lifetime Achievement Award, the 2018 PEN America Literary Service Award, the 2014 National Medal of Arts, and the 2003 National Book Foundation Medal for Distinguished Contribution to American Letters. He lives in Bangor, Maine, with his wife, novelist Tabitha King.

Praise for The Outsider:

"A juicy tale that plays at the forefront of our current phobias... [The Outsider] will remind readers of King's early novel It."

“What begins as a manhunt for an unlikely doppelgänger takes an uncanny turn into the supernatural. King’s skillful use of criminal forensics helps to ground his tale in a believable clinical reality where the horrors stand out in sharp relief.”

“Absolutely riveting. . . another shockingly dark book—perfect for longtime fans, of whom there are, well, zillions.”

“There’s plenty of shadowy, wormy supernatural goings-on in Stephen King’s new novel The Outsider. Yet the most unsettling stuff — that which will leave you uncomfortable when you sit and devour this first-rate read — probes the monstrous side of human nature.”

"Do yourself a favor and read the book.”

“An It for the Trump era…remarkable and deeply pleasurable.”

"Here’s to mutant rats in the basement and Mexican myths; here’s to the strange and to Stephen King. Still inspiring."

"King is arguably as much an American icon as the ’68 Fastback or a classic red and white Plymouth Fury. All of these glories are on full display in his latest mystery-horror hybrid...you’re in for one hell of a ride.”

“King appears to be on a hot streak, that he extends with The Outsider. Big, complex and inventive, it’s a well-honed continuation of his interest in the intersection of crime and horror fiction, demonstrating his consummate skill with both.”

"Every time Stephen King writes another book, I worry. Has he gone to the horror well too often? Will it be as good as It or Dolores Claiborne or Doctor Sleep or any of his 50-plus other titles? Luckily, his scary ideas continue to flow unfettered from his mind to the pages, most recently in The Outsider...masterful.”

“The Outsider is yet another outstanding offering from Stephen King, a darkly engaging ride of a read that demonstrates once again that despite a decades-spanning career, he’s still performing at the height of his powers."

"The Outsider is, in many ways, an ideal combination of classic King supernatural terror and his more contemporary foray into crime writing, wedding an intricately plotted whodunit with a monster tale that has more than a few shades of It...one of King’s strongest books in the past decade; an enjoyable dovetailing of crime and supernatural horror that will please Constant Readers and newcomers alike."

“[A] fascinating mystery that challenges fans of detective yarns to be on top of their game.”

“A well-researched, finely tuned crime-cum-legal case novel forms a good chunk of the book…it’s a genuinely intriguing mystery… the novel visits some very odd places – and I mean that as a compliment…[King] has always understood that the mystery – the question – is scarier than finding out the truth…The Outsider gives King fans exactly what they want at the same time as cramming in new ideas, proving the least surprising thing of all: that his novels are as strong as they ever were.”

“How could a man so beloved and respected, a man the whole community has trusted with their children, commit such an unthinkable crime? It can’t be true. It must be true. That’s the situation Stephen King sets up with blazing intensity in the first chapter of his new novel …The Outsider is proof King isn’t losing his touch: It’s a first-rate example of his signature technique of combining solidly realistic writing and believable characters with disturbingly creepy horror…a horrifying ride that challenges its characters not to succumb to their own darkness.”

Very Fine in a Very Fine dust-jacket. A well-cared for volume, protected from any potential damage. The condition is of the highest quality without any discernible flaws. Unread book with square and tight spine. Free of any marks, writings, or stamps. A wonderful bright clean copy. Photos of actual item. Includes a new matching custom slipcase.