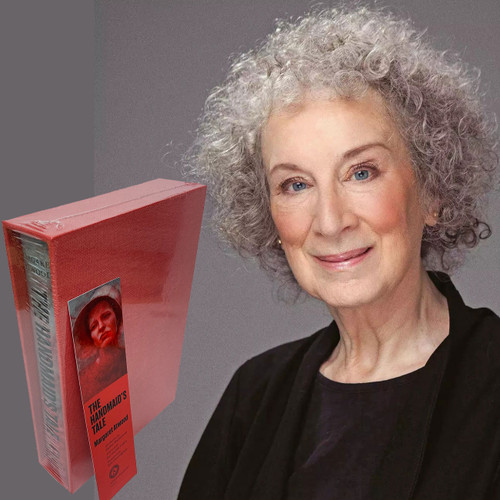 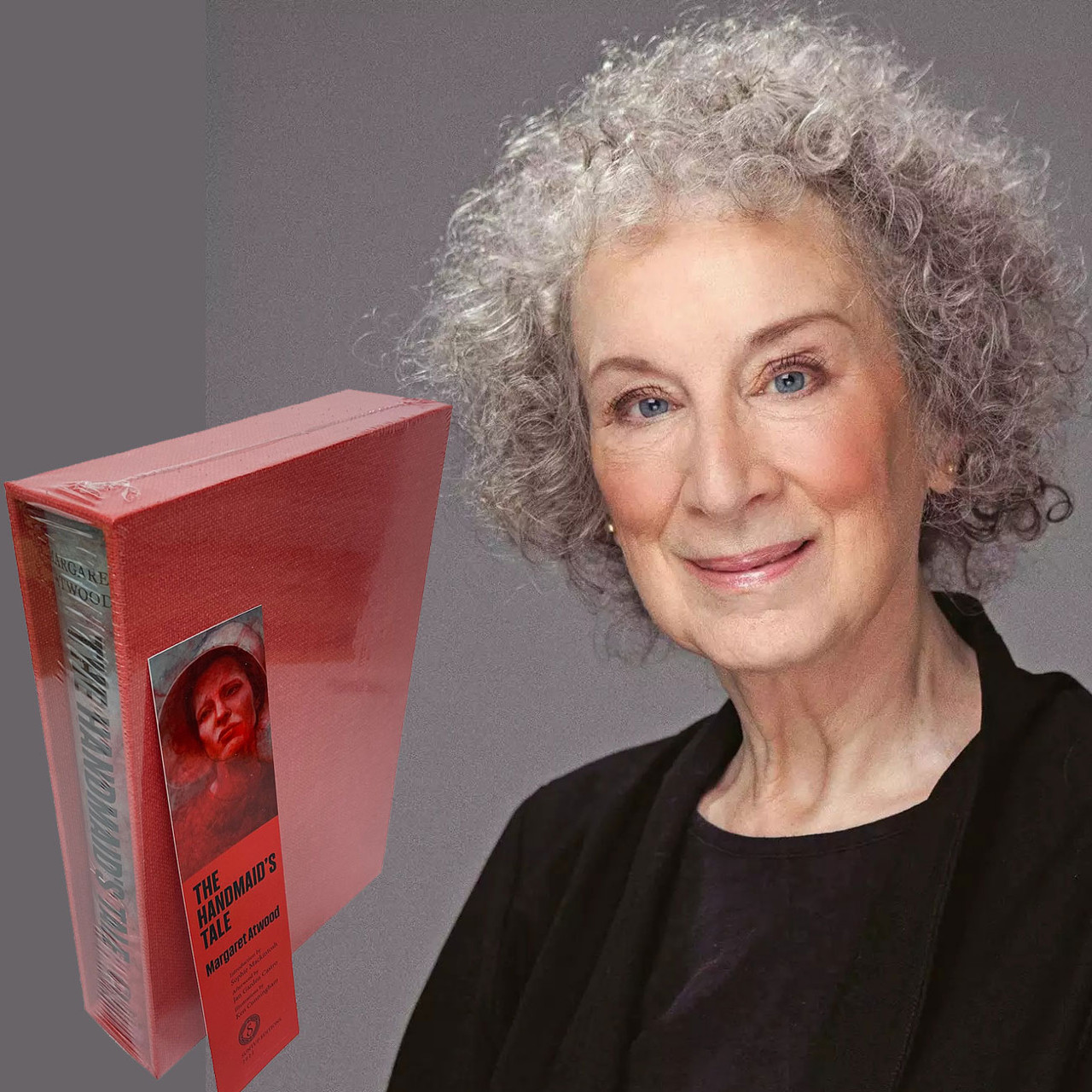 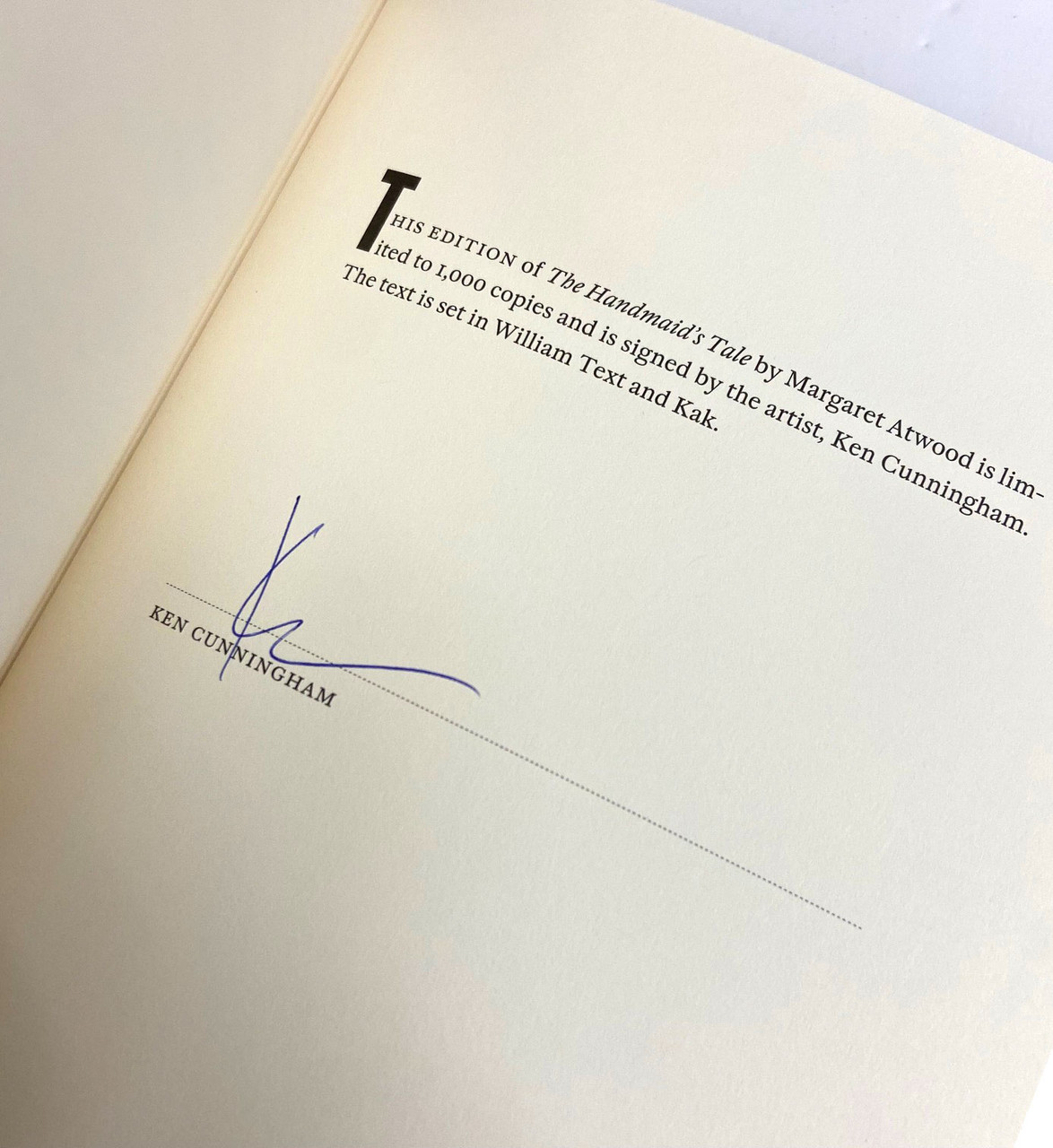 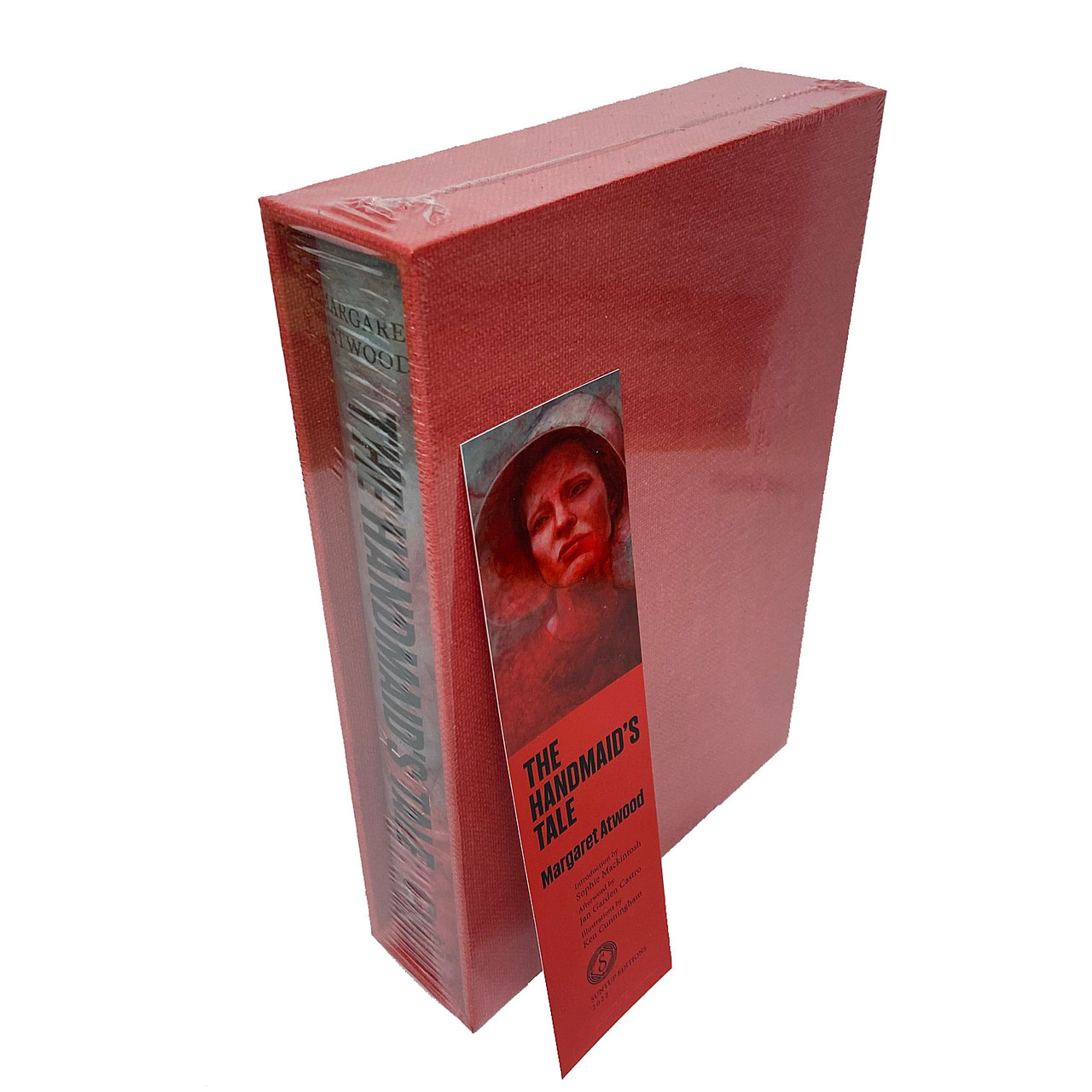 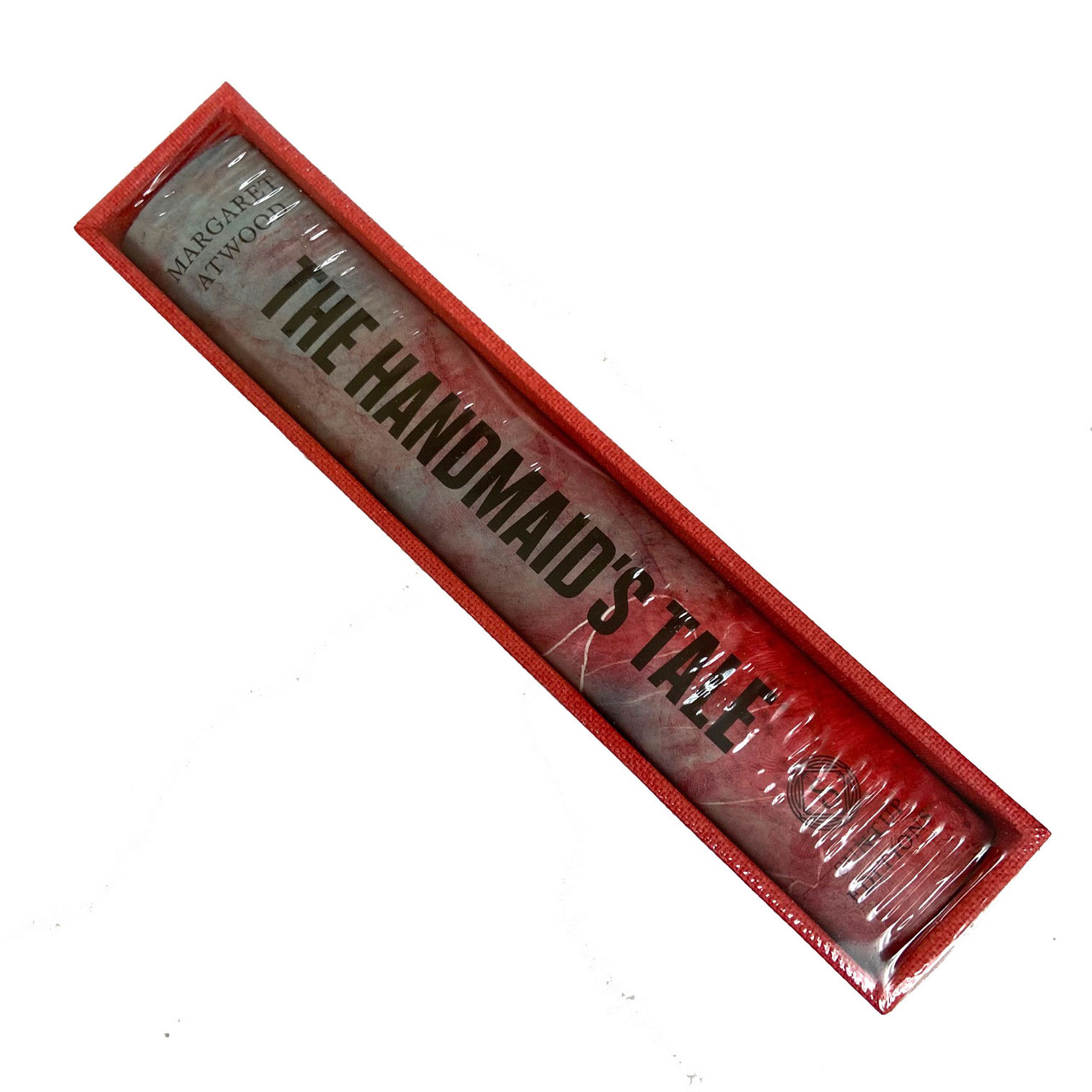 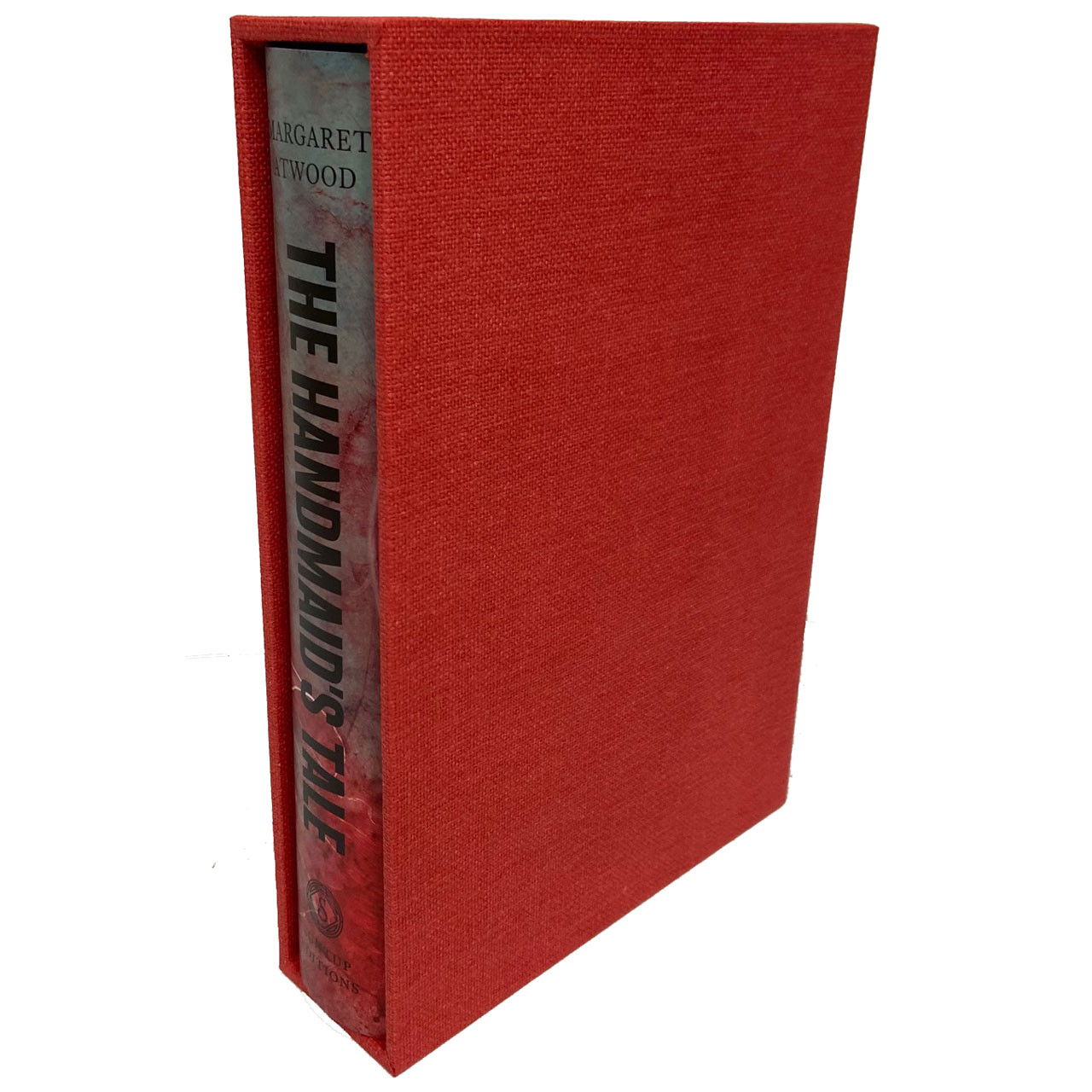 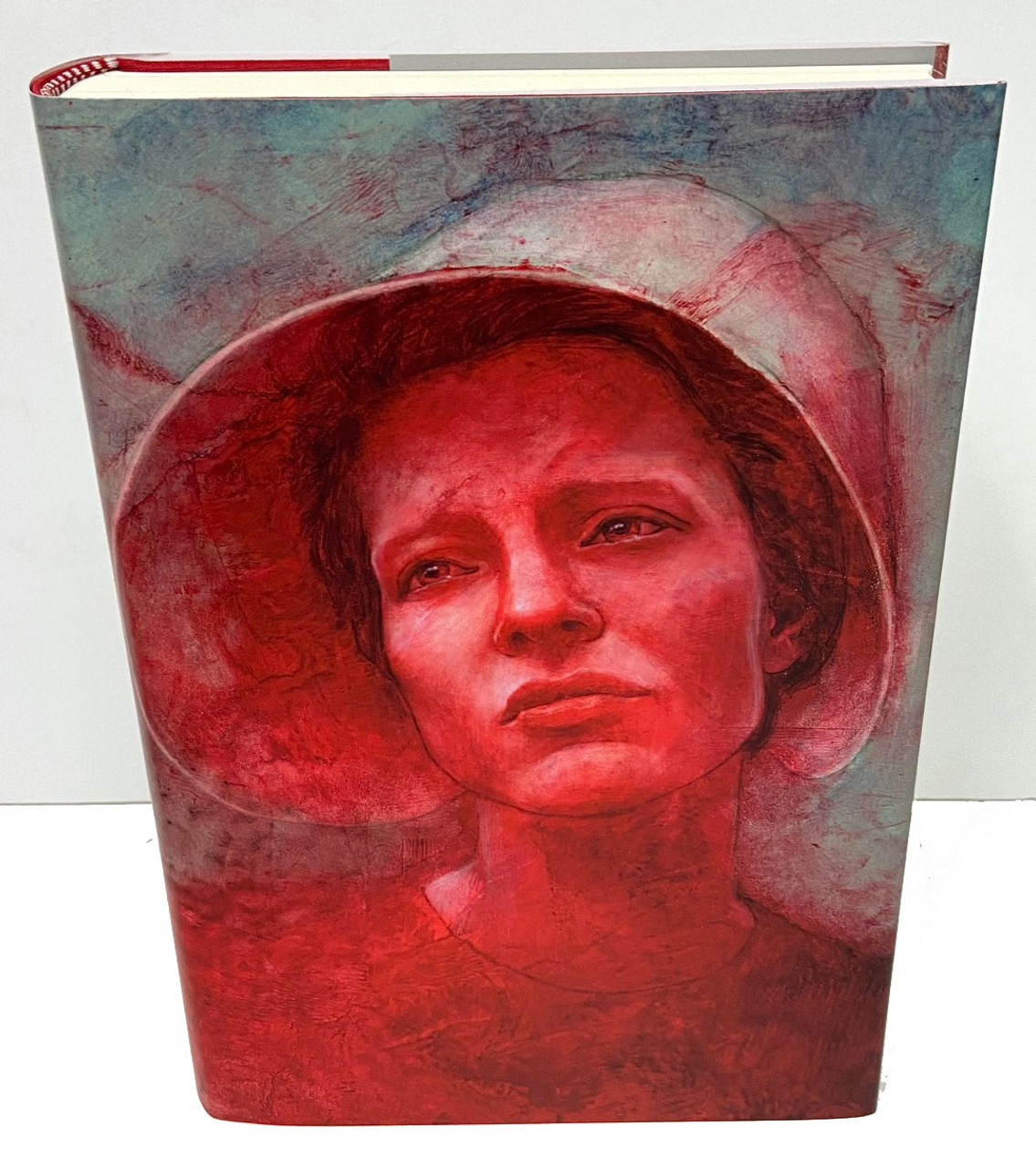 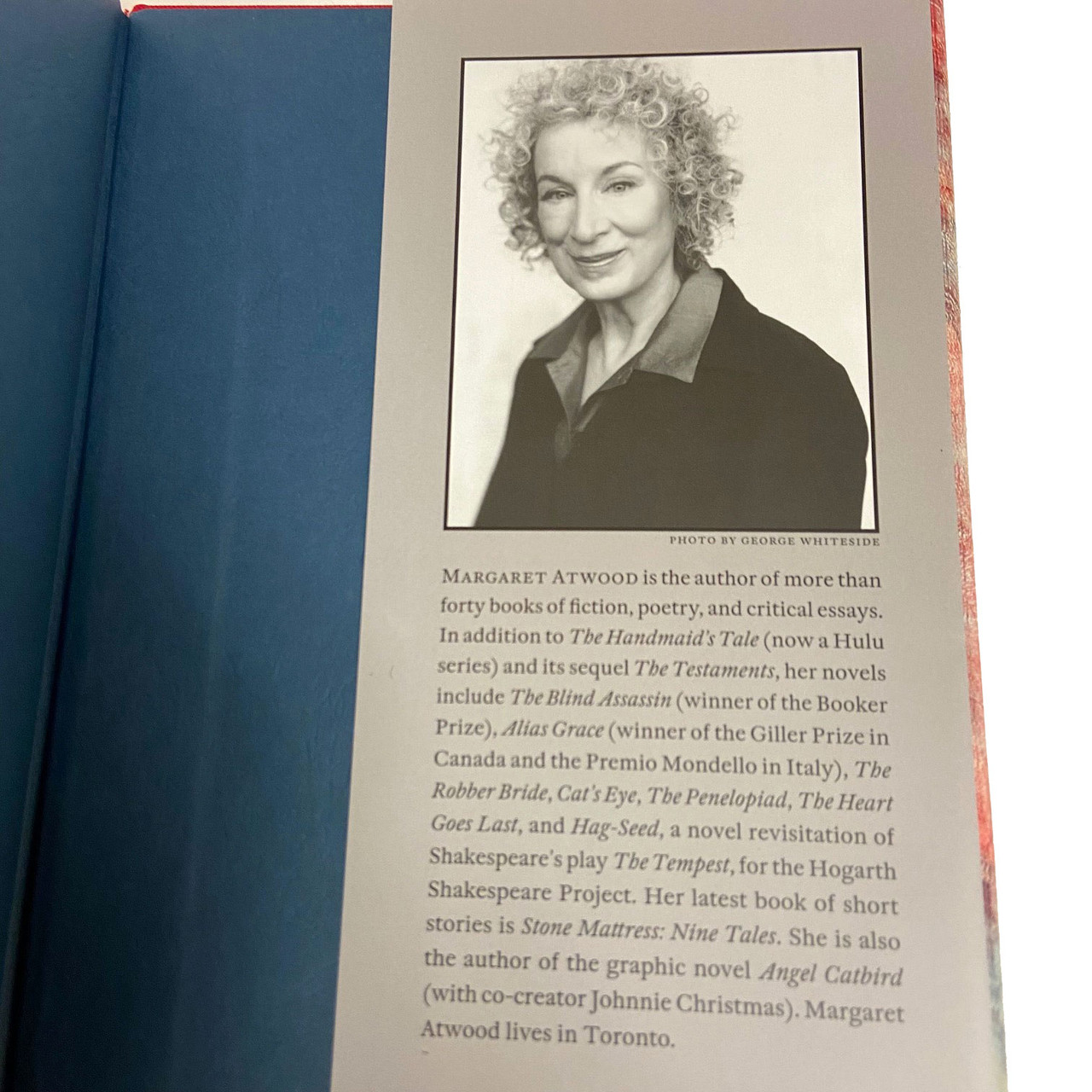 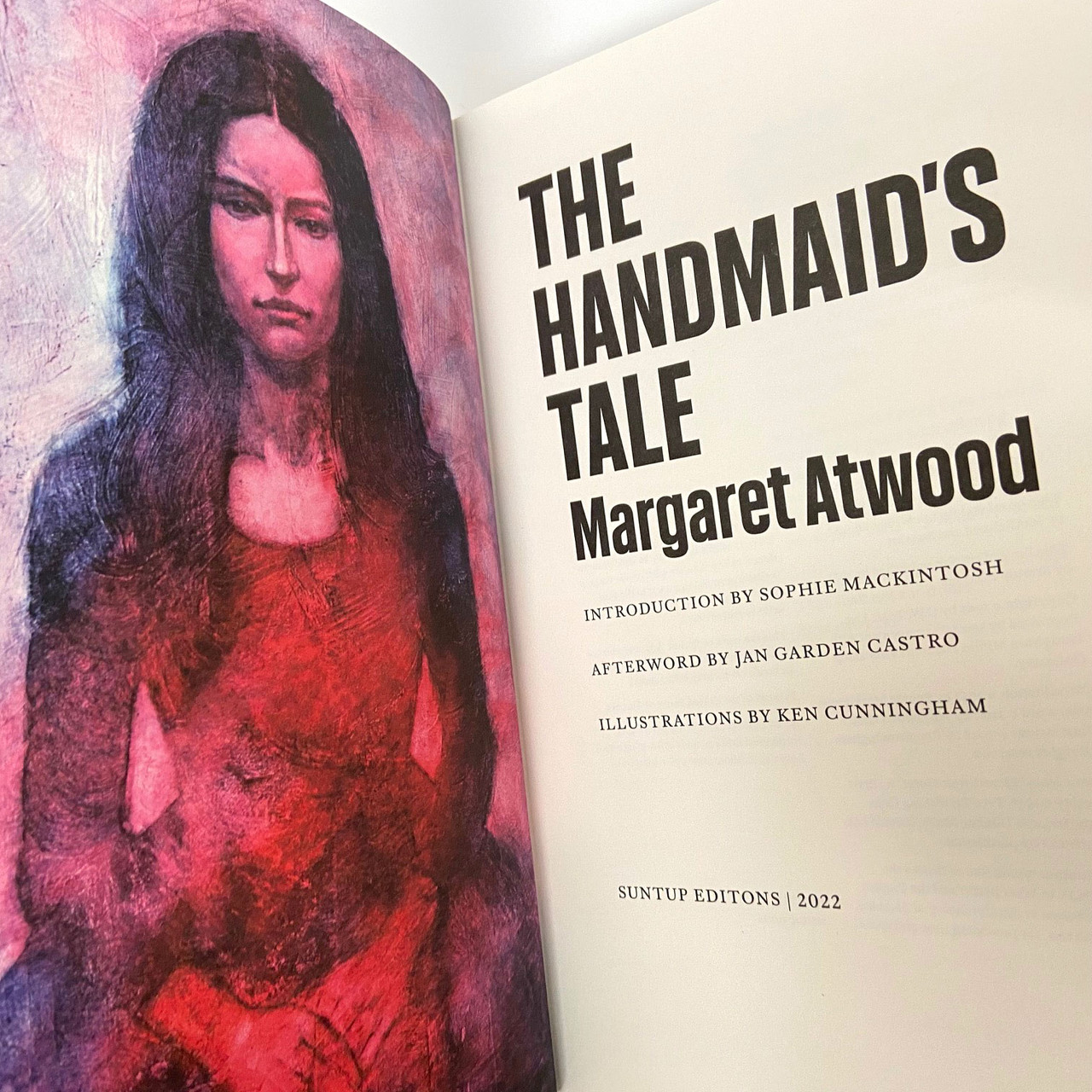 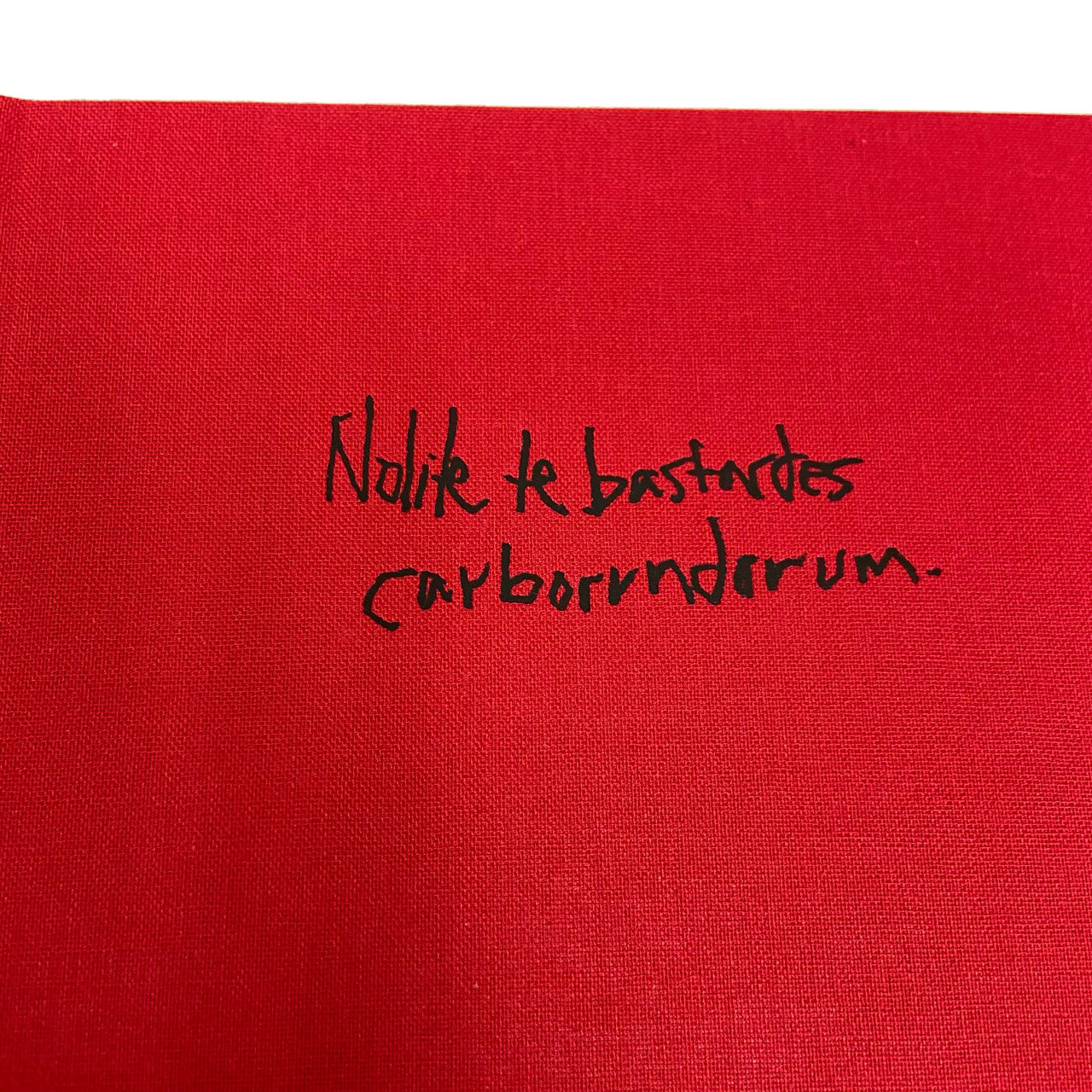 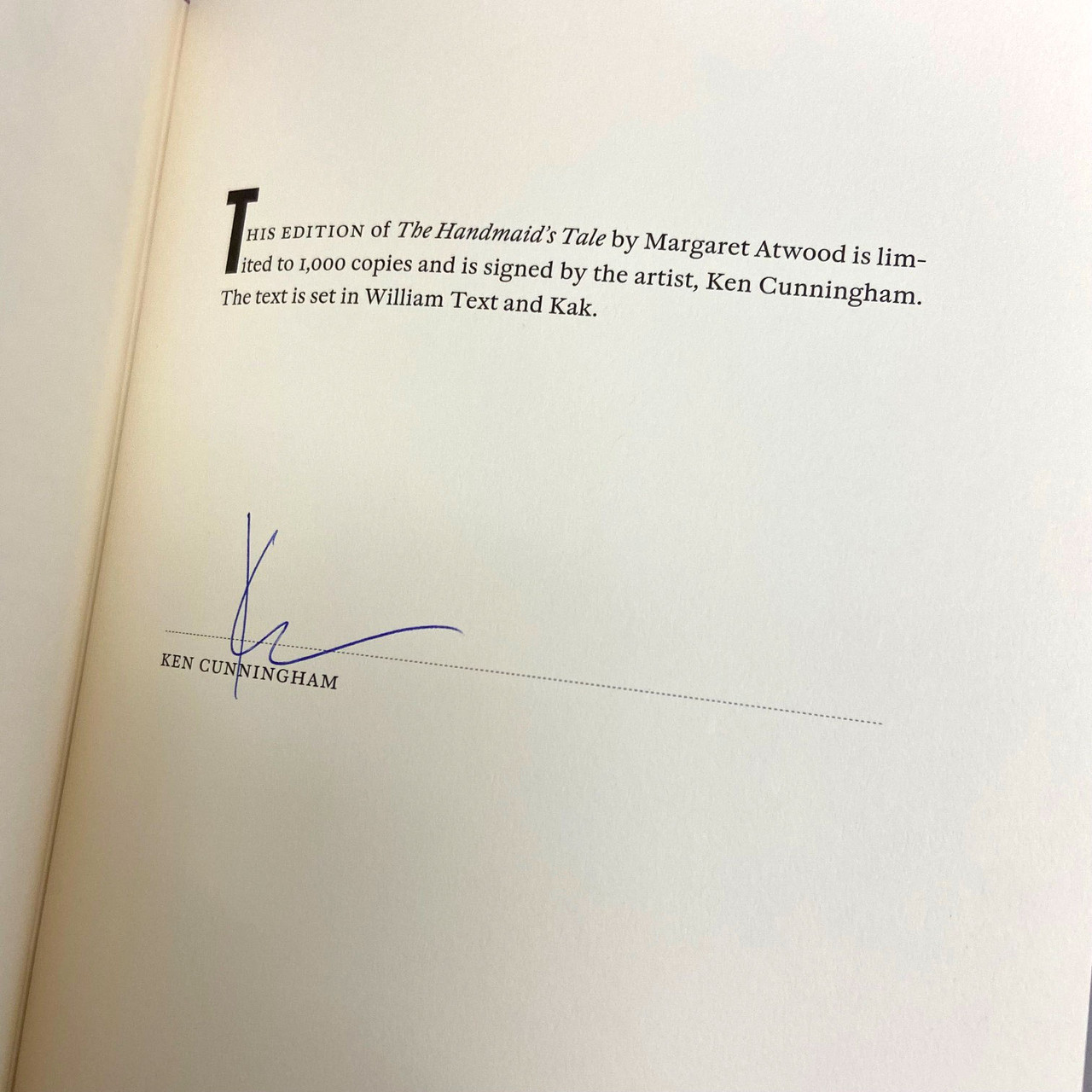 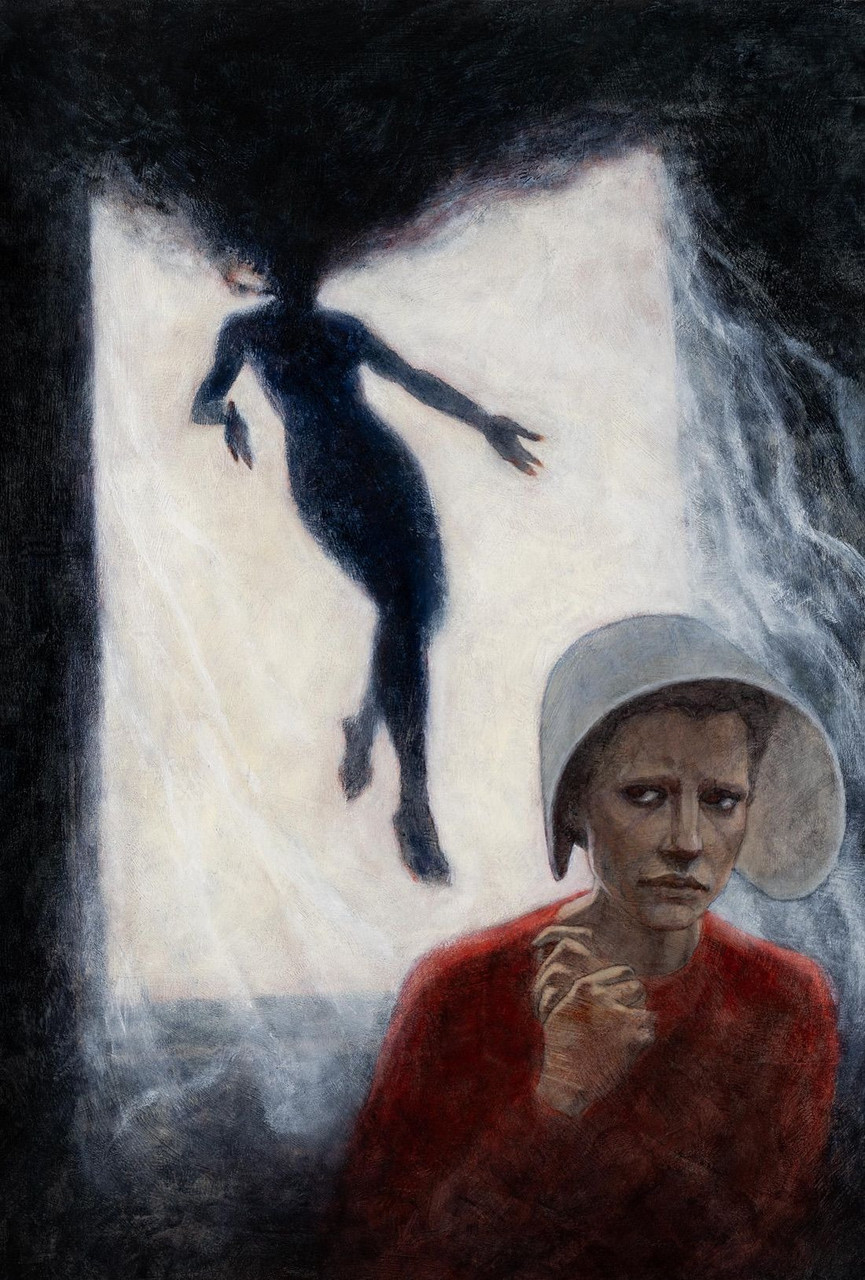 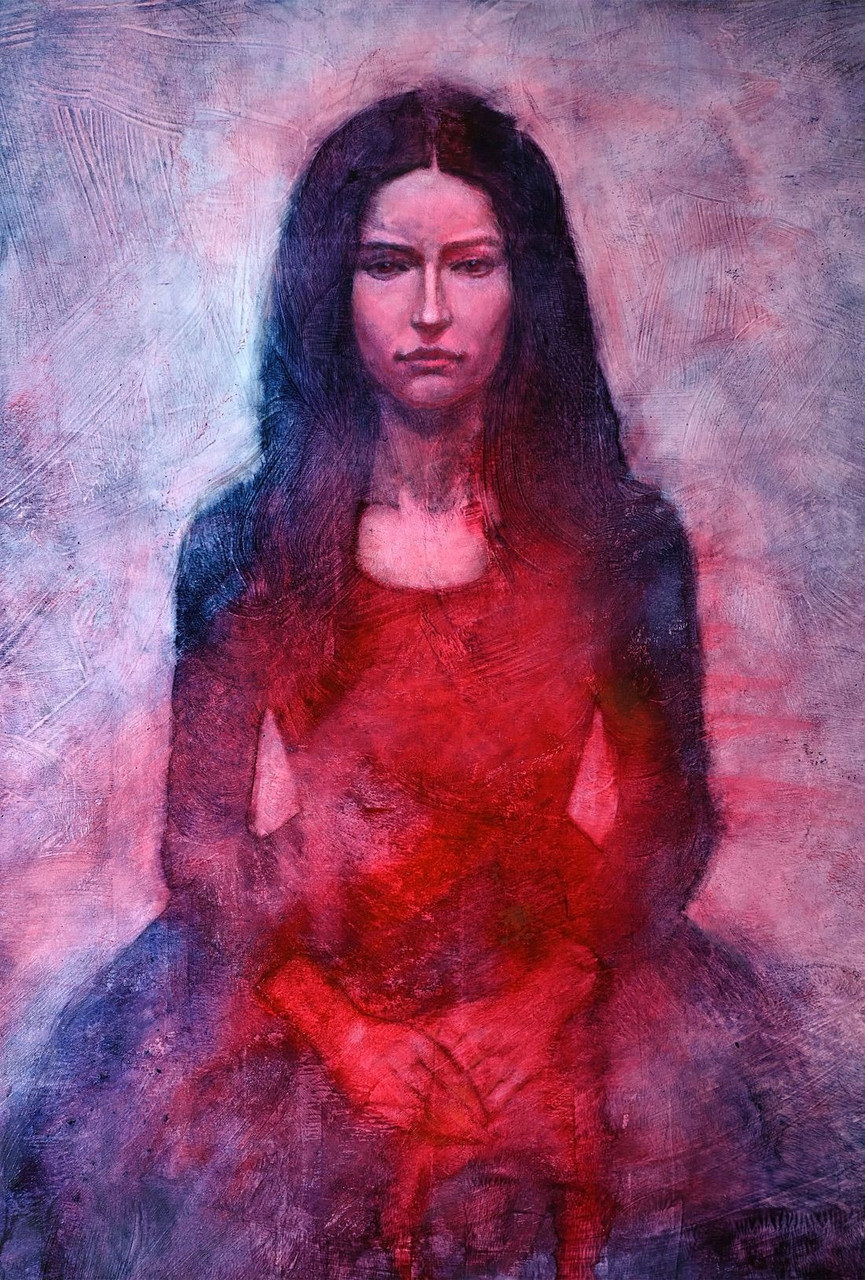 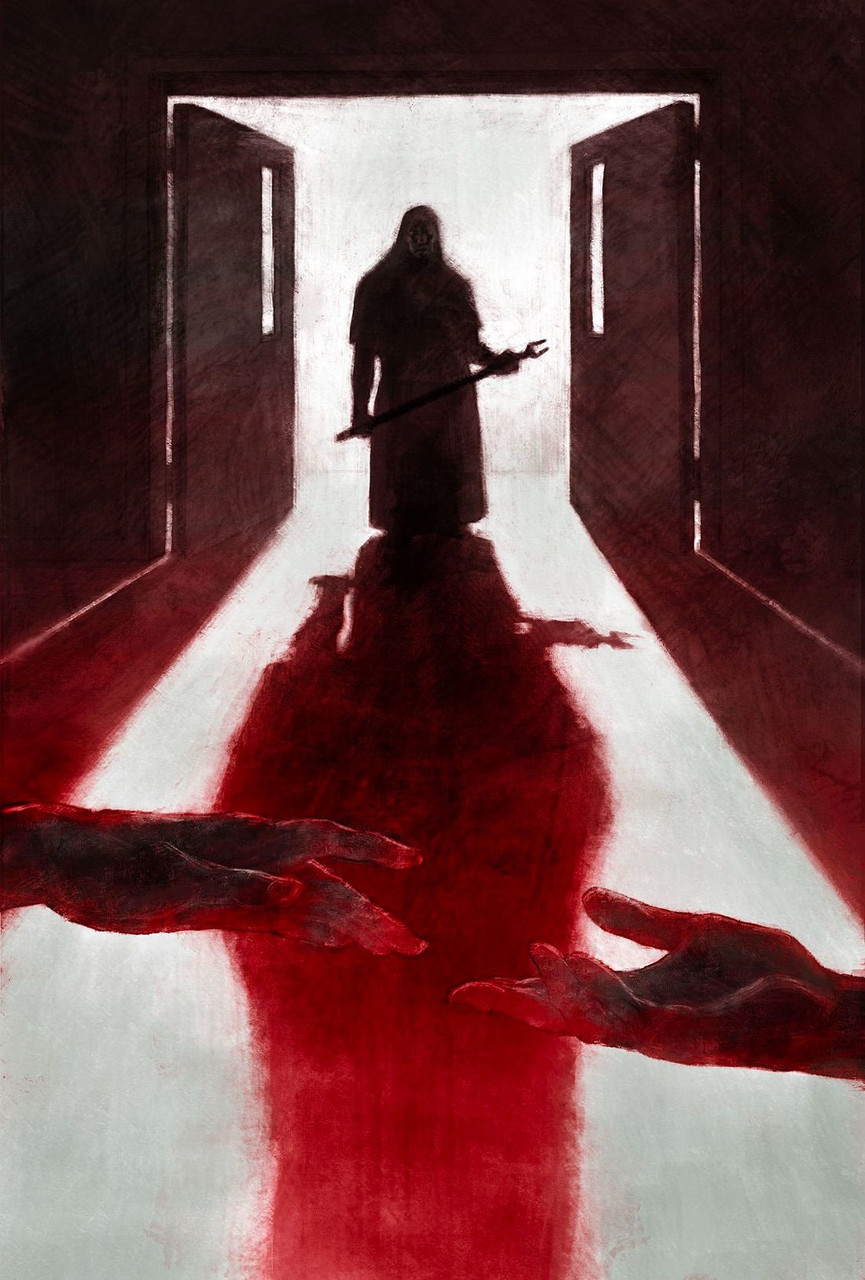 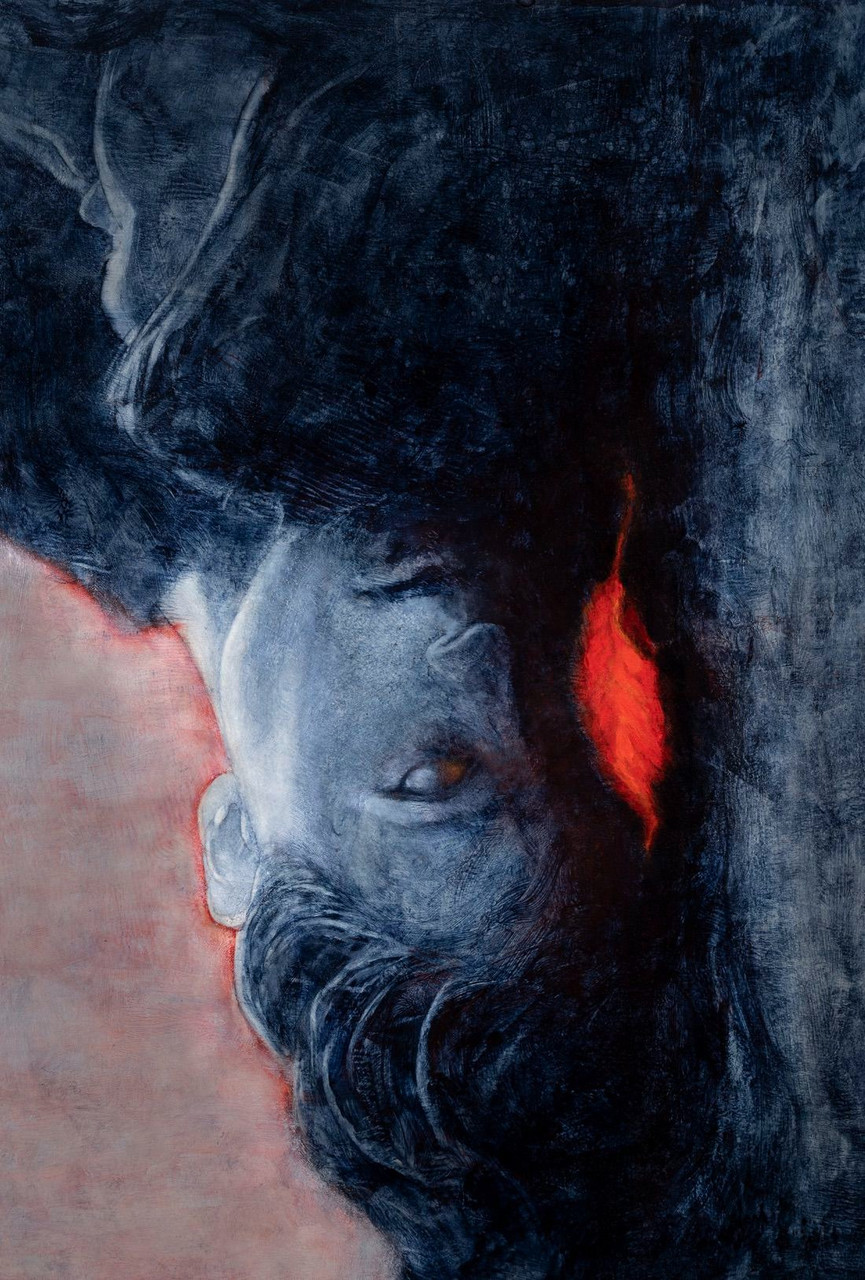 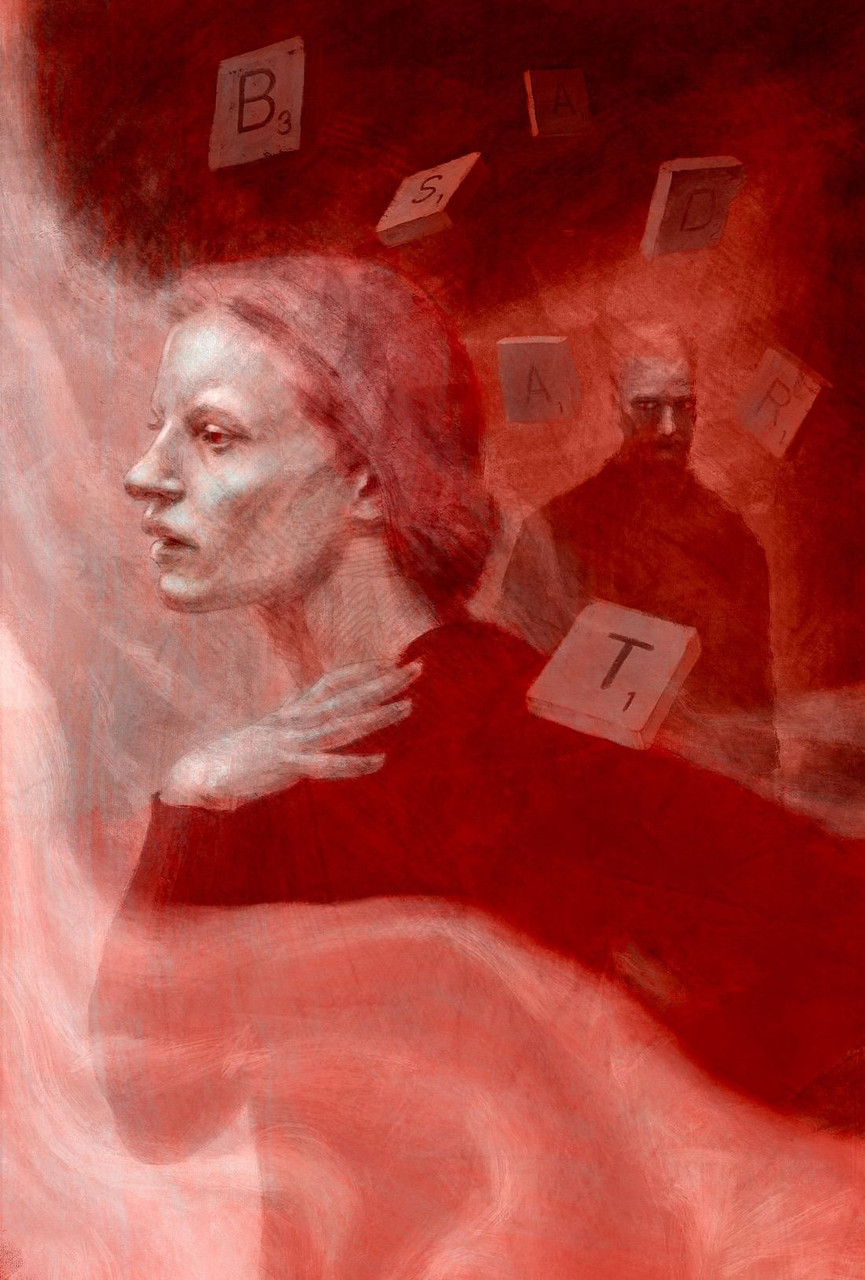 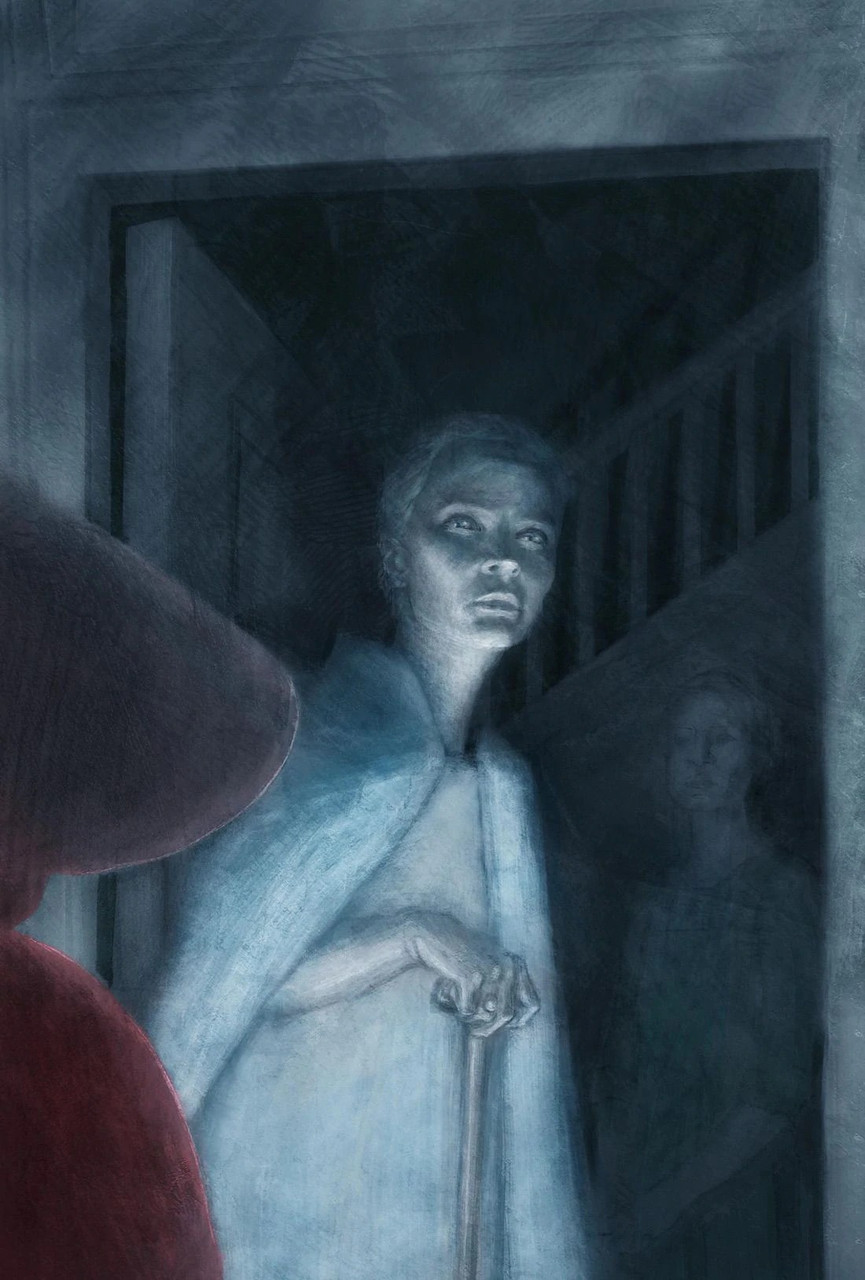 Suntup Editions 2022. Margaret Atwood "The Handmaid's Tale". The Artist edition is limited to 1000 copies, and is the only edition to include a dust jacket illustrated by Ken Cunningham. It is a full cloth, smyth sewn binding with two-hits foil stamping, and is housed in an embossed paper covered slipcase. The edition features embossed endsheets and is printed offset on premium archival Cougar Natural Vellum paper. This edition is signed by the artist.

SIGNED ARTIST EDITION - LIMITED TO ONLY 1,000

Given that The Handmaid’s Tale is about the oppression of women, we thought it important that the types we used to set the book be designed by a woman. In this case, one woman: Maria Doreuli. Her William Text is based on the types of William Caslon (1692–1766), whose letterforms would have been familiar to Puritan New Englanders from whom the founders of Gilead seemed to take so much inspiration. The display type, Kak, has its own oppressive qualities: It’s heavy and dark and looming, always making its presence known. Like Gilead, it is overwhelming, inescapable, and allows for no light (or hope) to get through.

One of the most chilling cautionary tales of the 20th century, The Handmaid’s Tale by Margaret Atwood is a tour de force of dystopian fiction.

It is the world of the near future, and Offred is a Handmaid in the home of the Commander and his wife. She is allowed out only once a day to the market, she is not permitted to read and she is hoping the Commander makes her pregnant; as her very existence is only valued if her ovaries are viable.

Offred can remember the years before, when she was an independent woman, had a job of her own, a husband and child. Now those days seem far away. For in their wake, the land that was once the United States has become the Republic of Gilead, a monotheocracy that has reacted to social unrest and a sharply declining birth rate by reverting to and going beyond the repressive intolerance of the original Puritans. The regime takes the Book of Genesis absolutely at its word, with bizarre consequences for the women and men in its population.

Unpredictable, horrifying, and altogether convincing, The Handmaid’s Tale is an uncompromising portrait of totalitarianism and institutional misogyny. The novel explores themes of subjugated women in a patriarchal society, loss of female agency and individuality, and the various means by which they resist and attempt to gain individuality and independence.

In 2018, Atwood reflected on her process writing The Handmaid’s Tale: “I made a rule for myself. I would not include anything that human beings had not already done in some other place or time, or for which the technology did not already exist. I did not wish to be accused of dark, twisted inventions, or of misrepresenting the human potential for deplorable behavior.” 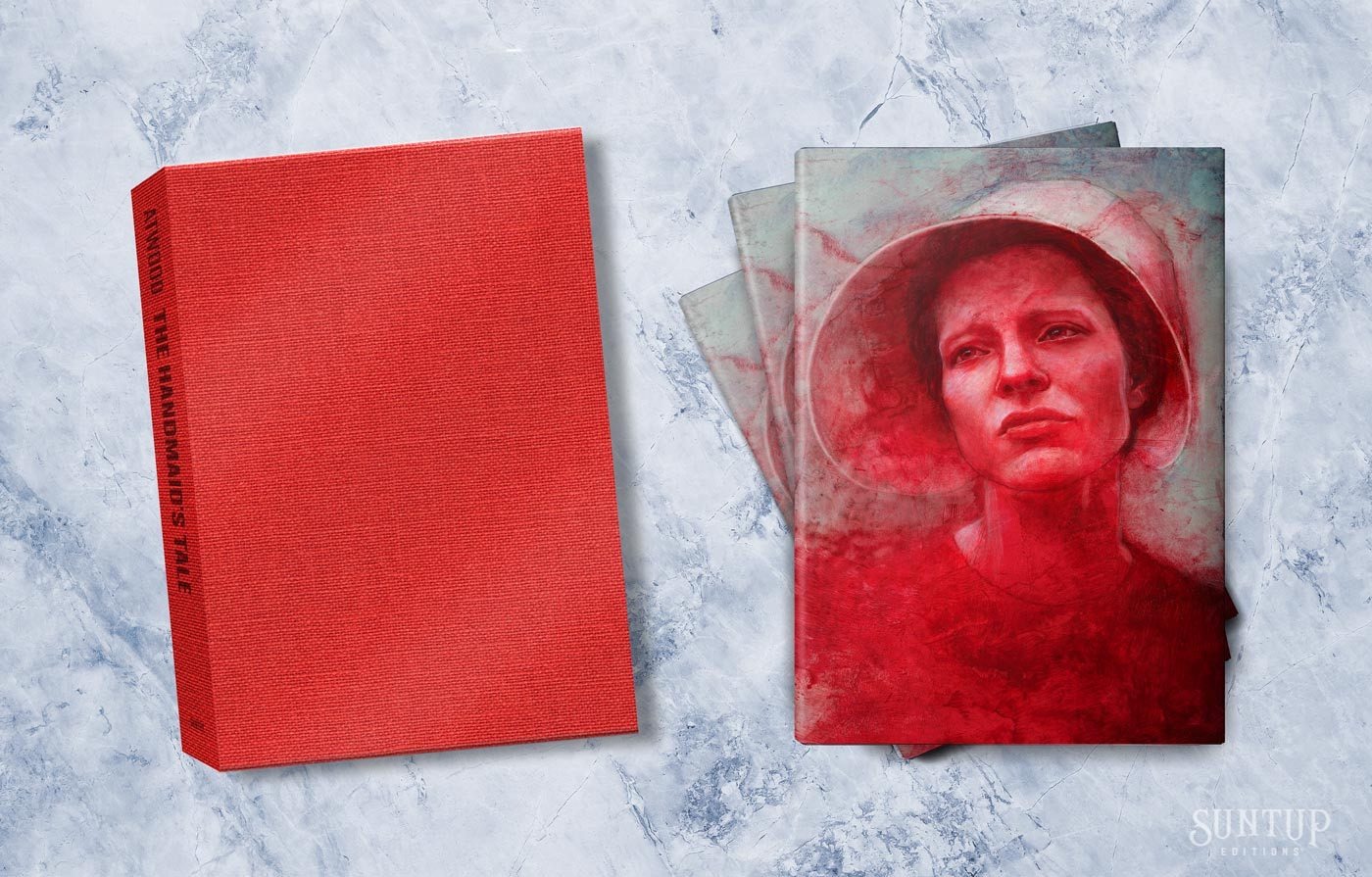 Margaret Eleanor Atwood CC OOnt CH FRSC FRSL (born November 18, 1939) is a Canadian poet, novelist, literary critic, essayist, teacher, environmental activist, and inventor. Since 1961, she has published 18 books of poetry, 18 novels, 11 books of non-fiction, nine collections of short fiction, eight children's books, and two graphic novels, and a number of small press editions of both poetry and fiction. Atwood has won numerous awards and honors for her writing, including two Booker Prizes, the Arthur C. Clarke Award, the Governor General's Award, the Franz Kafka Prize, Princess of Asturias Awards, and the National Book Critics and PEN Center USA Lifetime Achievement Awards.[2] A number of her works have been adapted for film and television.

Atwood's works encompass a variety of themes including gender and identity, religion and myth, the power of language, climate change, and "power politics". Many of her poems are inspired by myths and fairy tales which interested her from a very early age.

Atwood is a founder of the Griffin Poetry Prize and the Writers' Trust of Canada. She is also a Senior Fellow of Massey College, Toronto. She is the inventor of the LongPen device and associated technologies that facilitate remote robotic writing of documents. 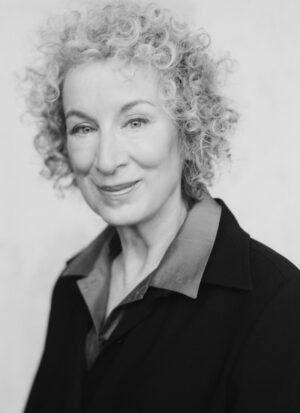 Ken Cunningham is an artist and multiple award–winning director.

As an artist Ken strives to create work that is mythic, poetic, transformational and personal. Through his work, he paints the elusive tide that lies beneath what we perceive in the world around us. His paintings reveal the layers of feeling we sense but that are just out of cognitive reach.

In 2021 Ken was privileged to have been commissioned to create seven paintings for Suntup Edition’s, limited edition publication of Margaret Atwood's The Handmaid's Tale. He was also excited to be a part of a series of group shows with Wow x Wow gallery as well as to be a part of Surreal Salon 13 exhibition, at Barton Rouge Gallery, curated Thinkspace Art in association with Juxtapoz magazine. As well, his art work has been featured in the Infected by Art annual, on the website of Beautiful Bizarre Magazine, and in 2020 his work was nominated for an Association of Science Fiction and Fantasy Artists (ASFA) Chesley award for best unpublished monochrome work.

As a director he has worked on projects for a diverse range of clients including Lego, Marvel, Lucasfilm and Universal Pictures, among others. His most recent project was The Lego Star Wars Terrifying Tales special for Disney+. 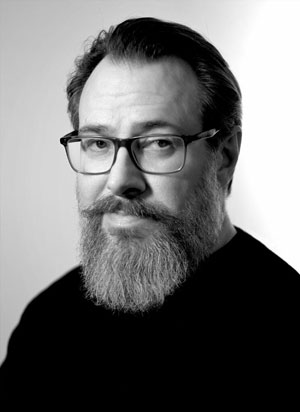 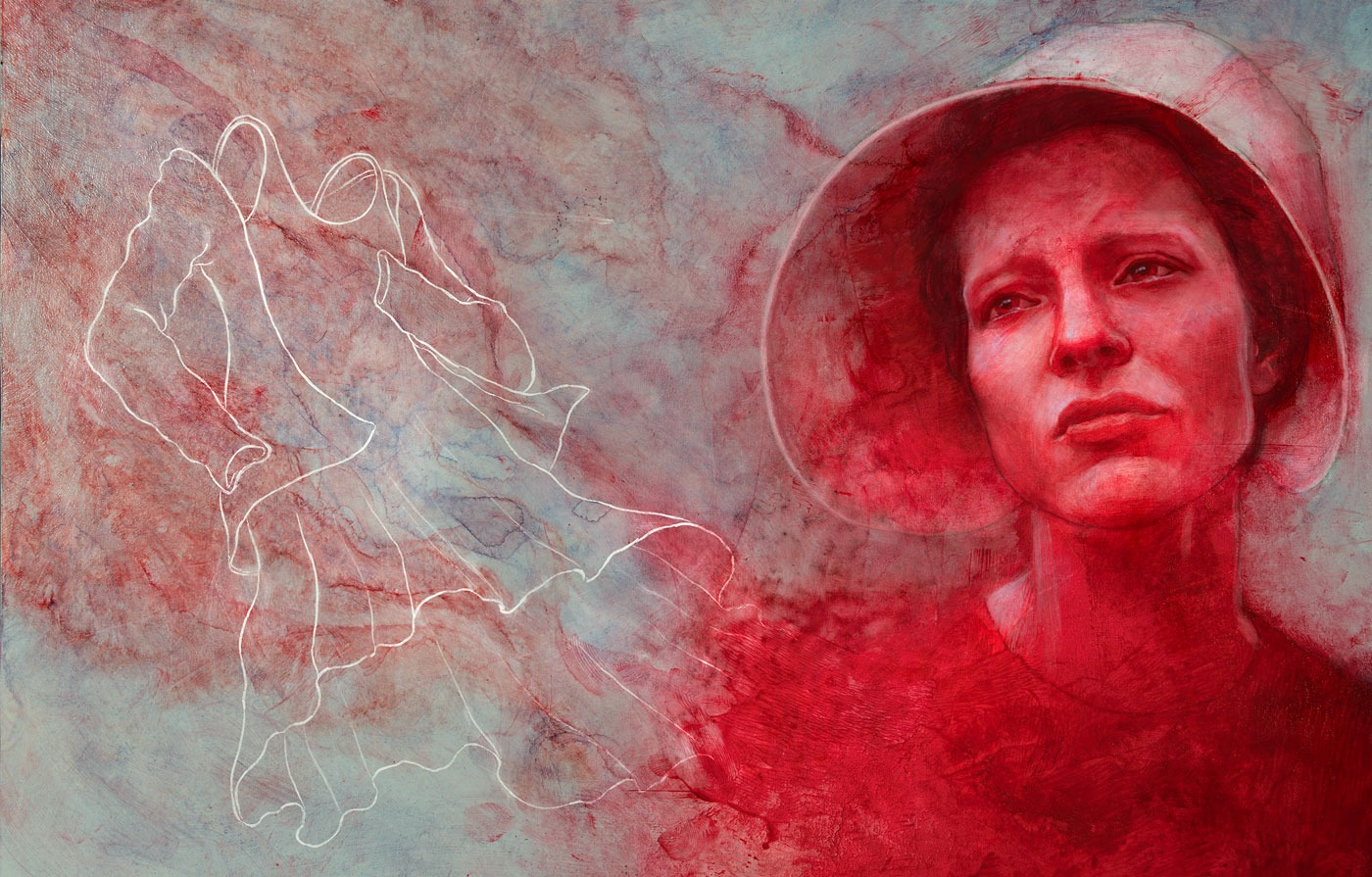 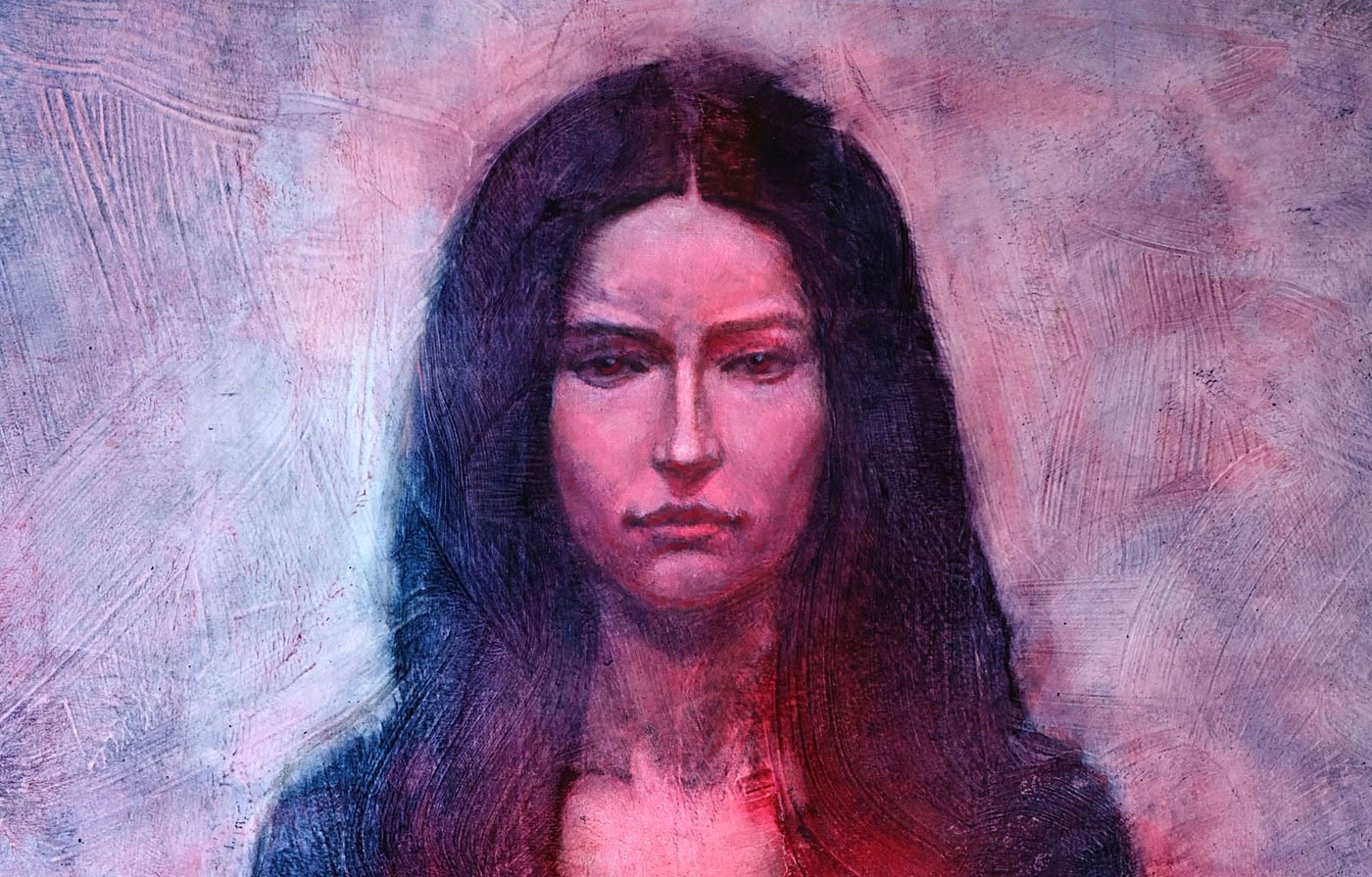