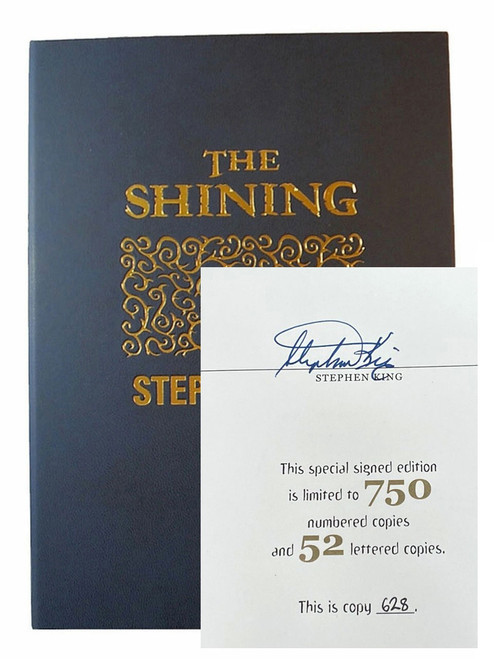 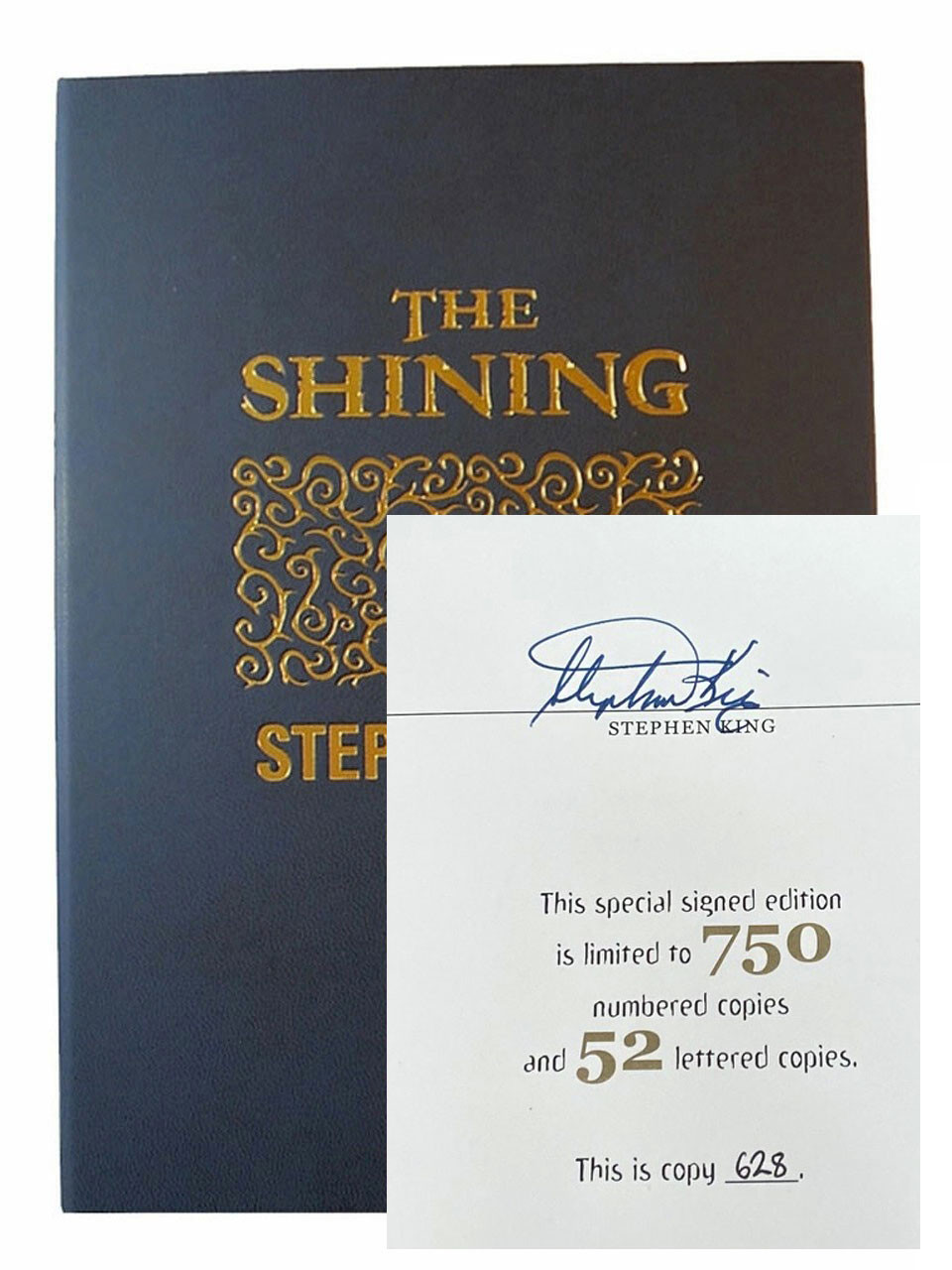 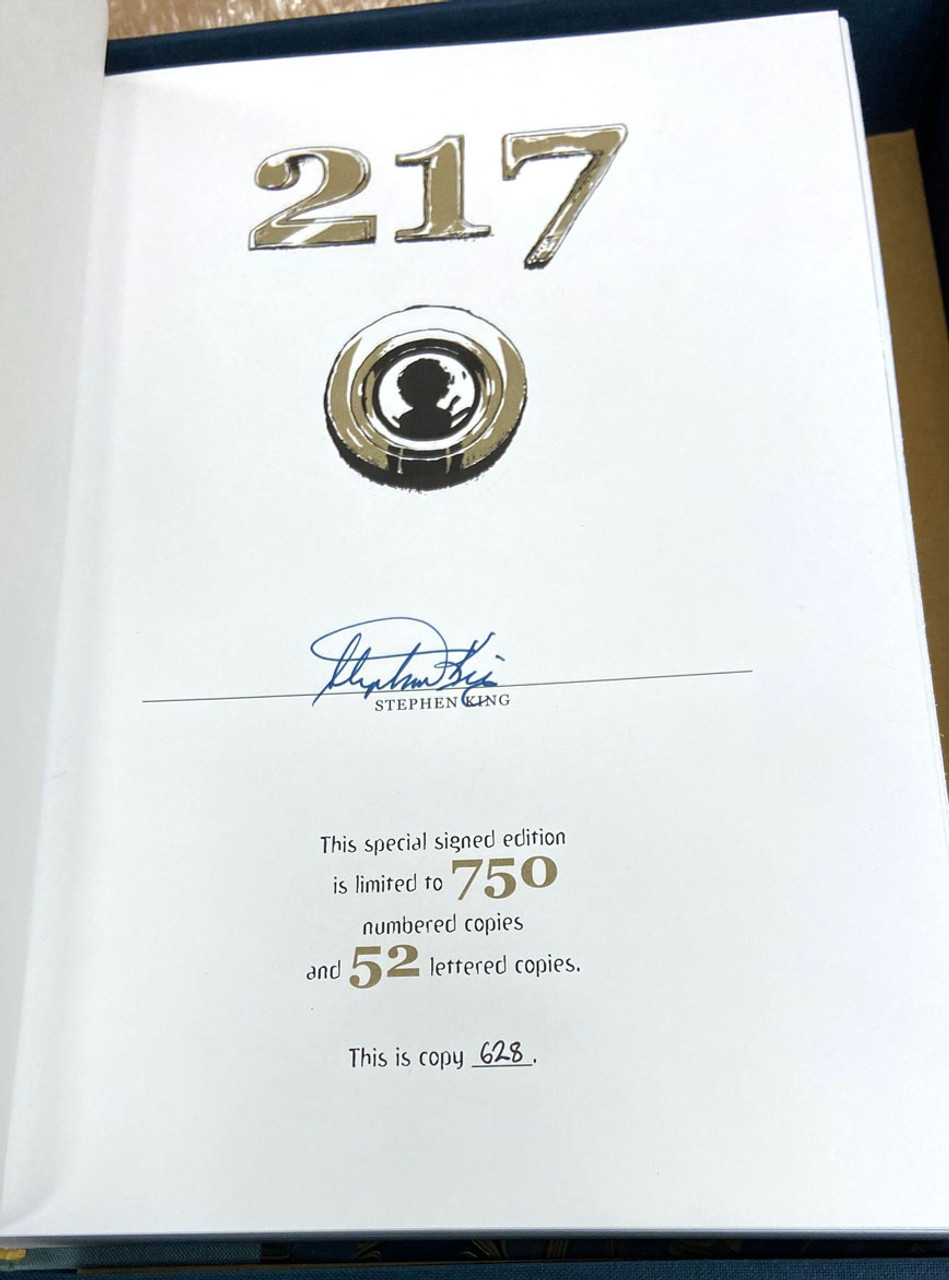 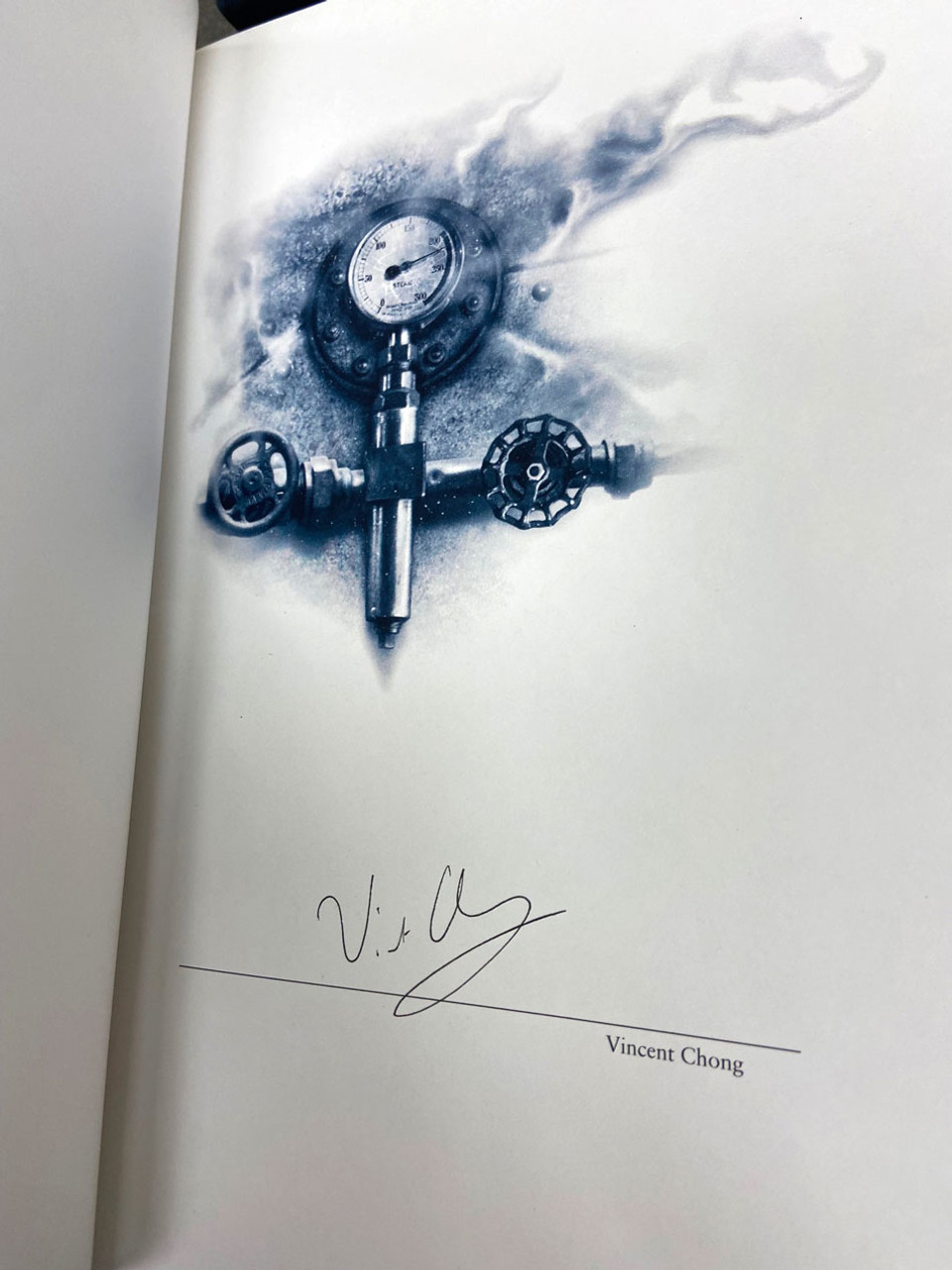 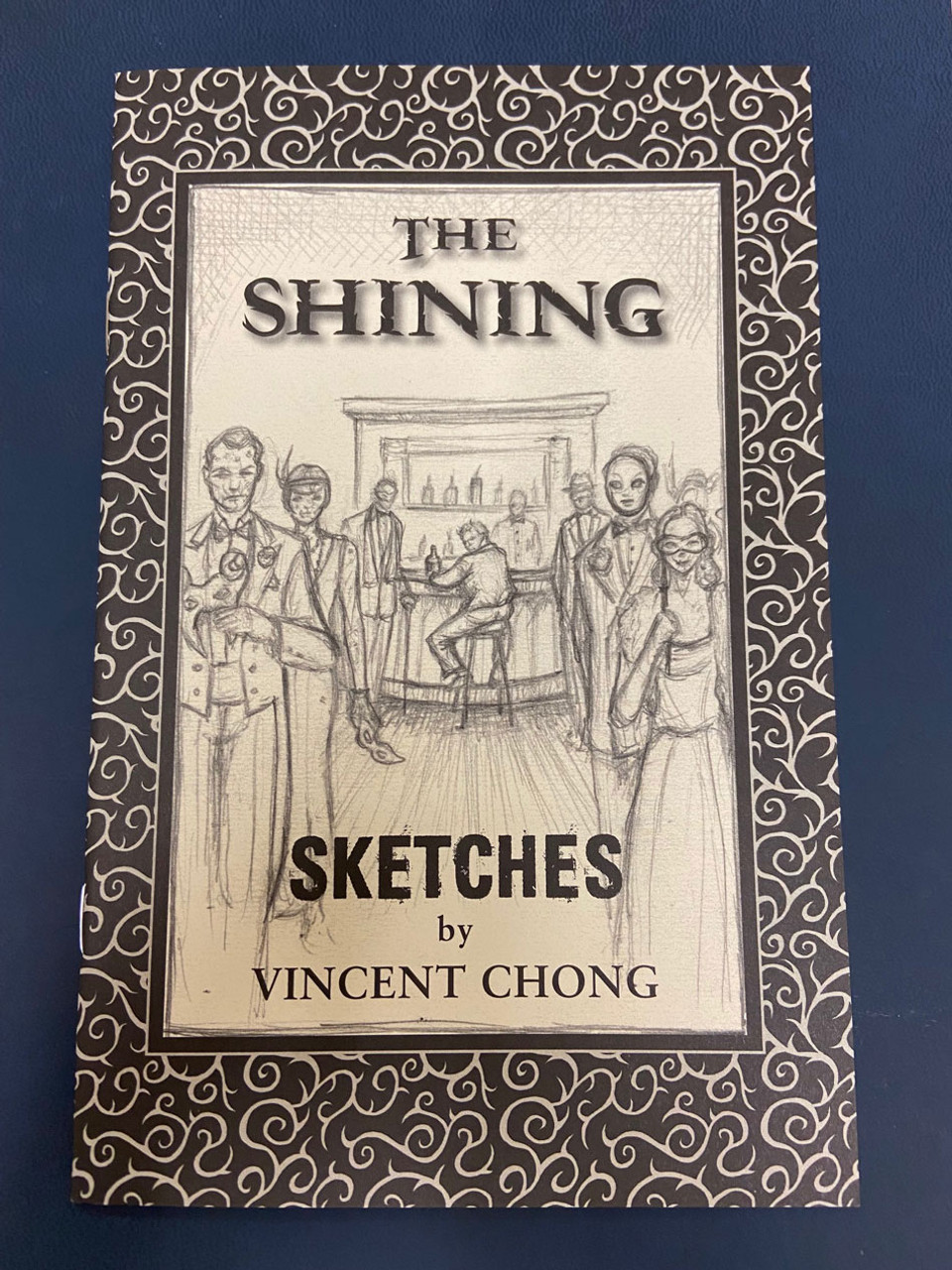 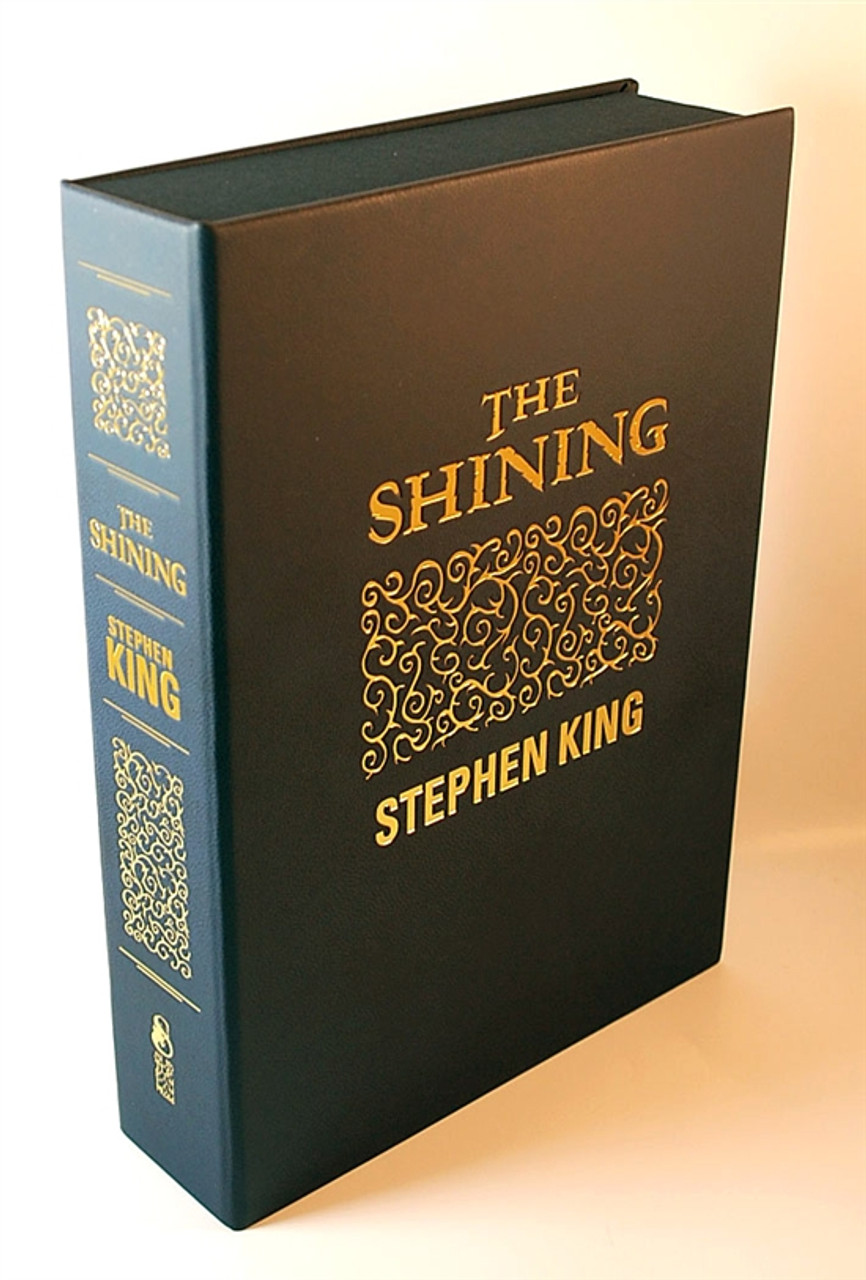 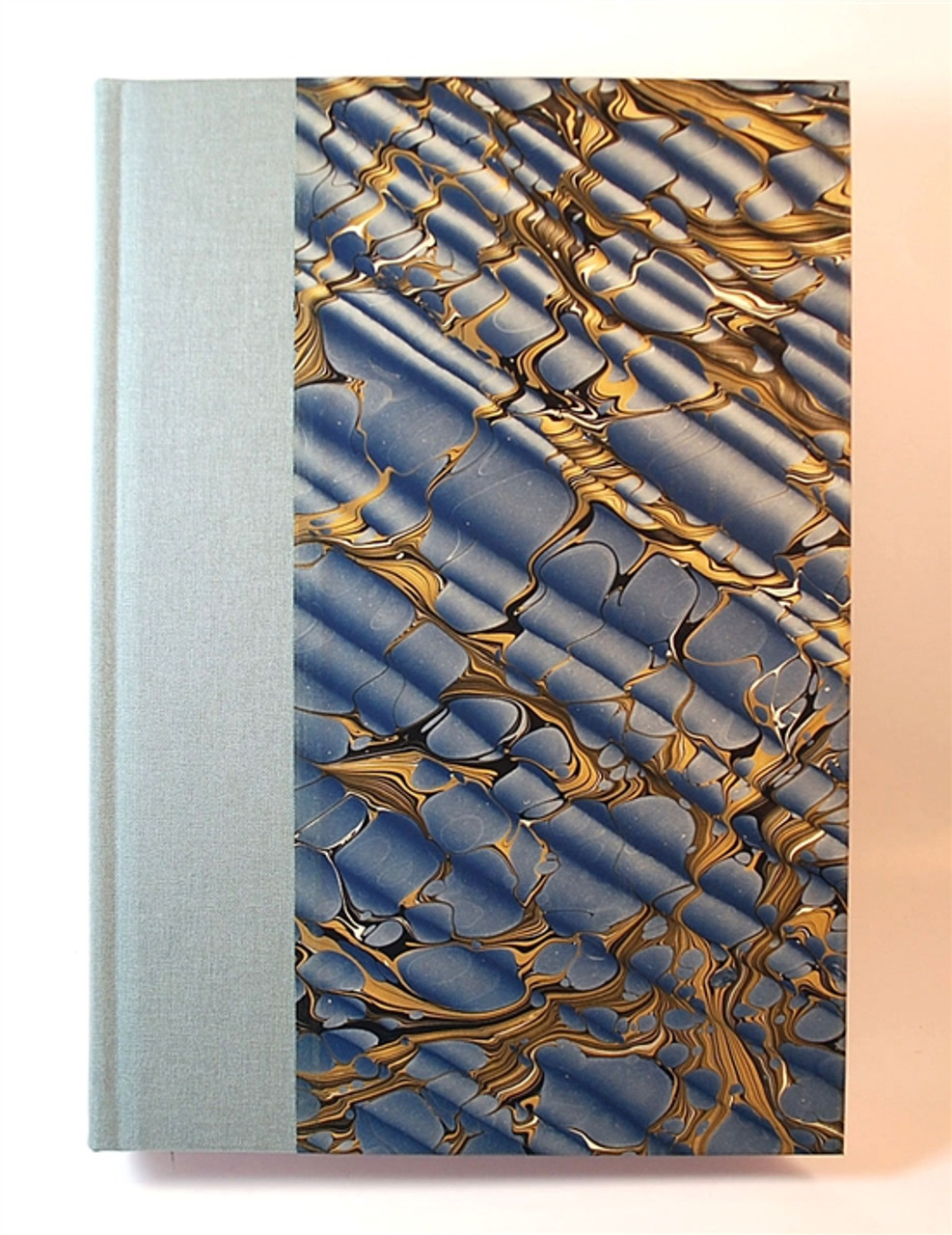 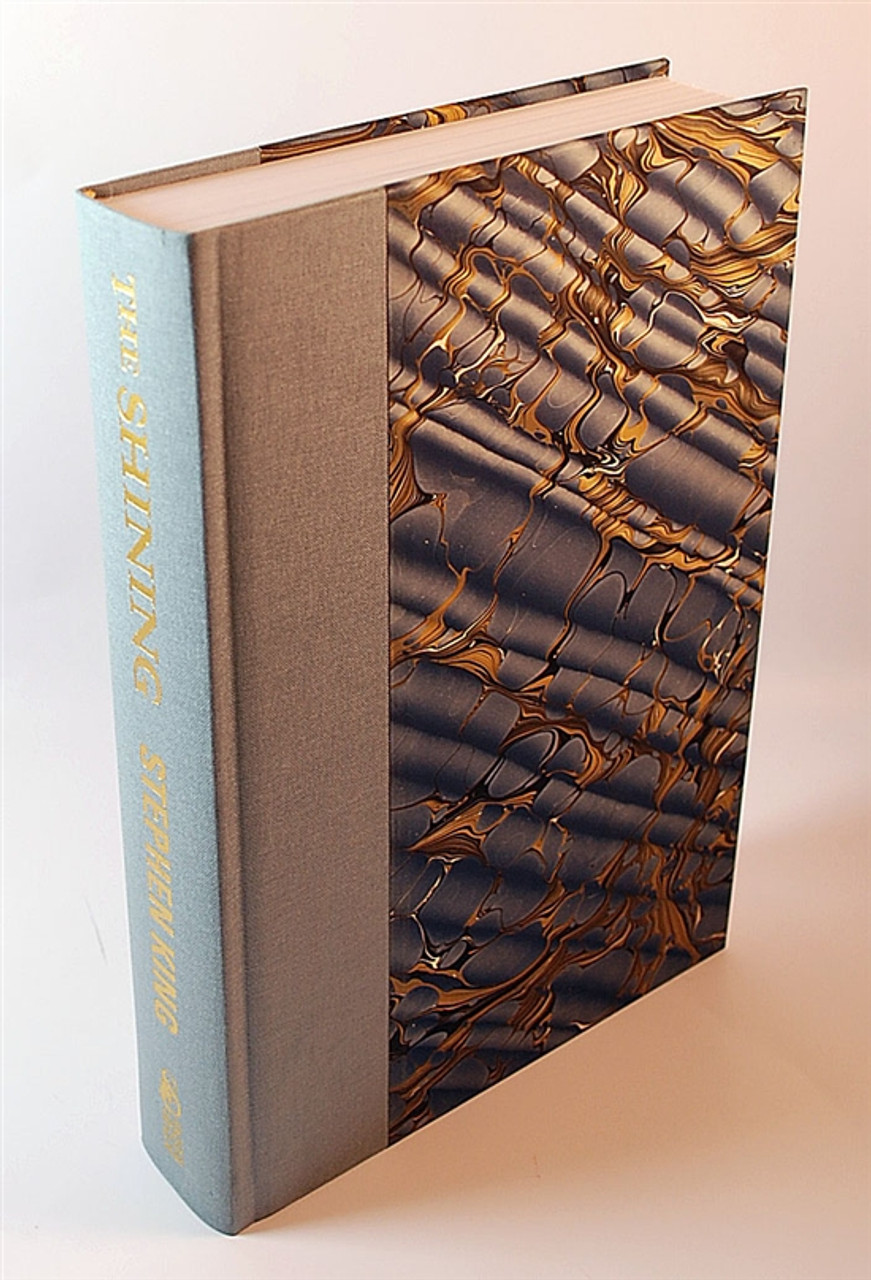 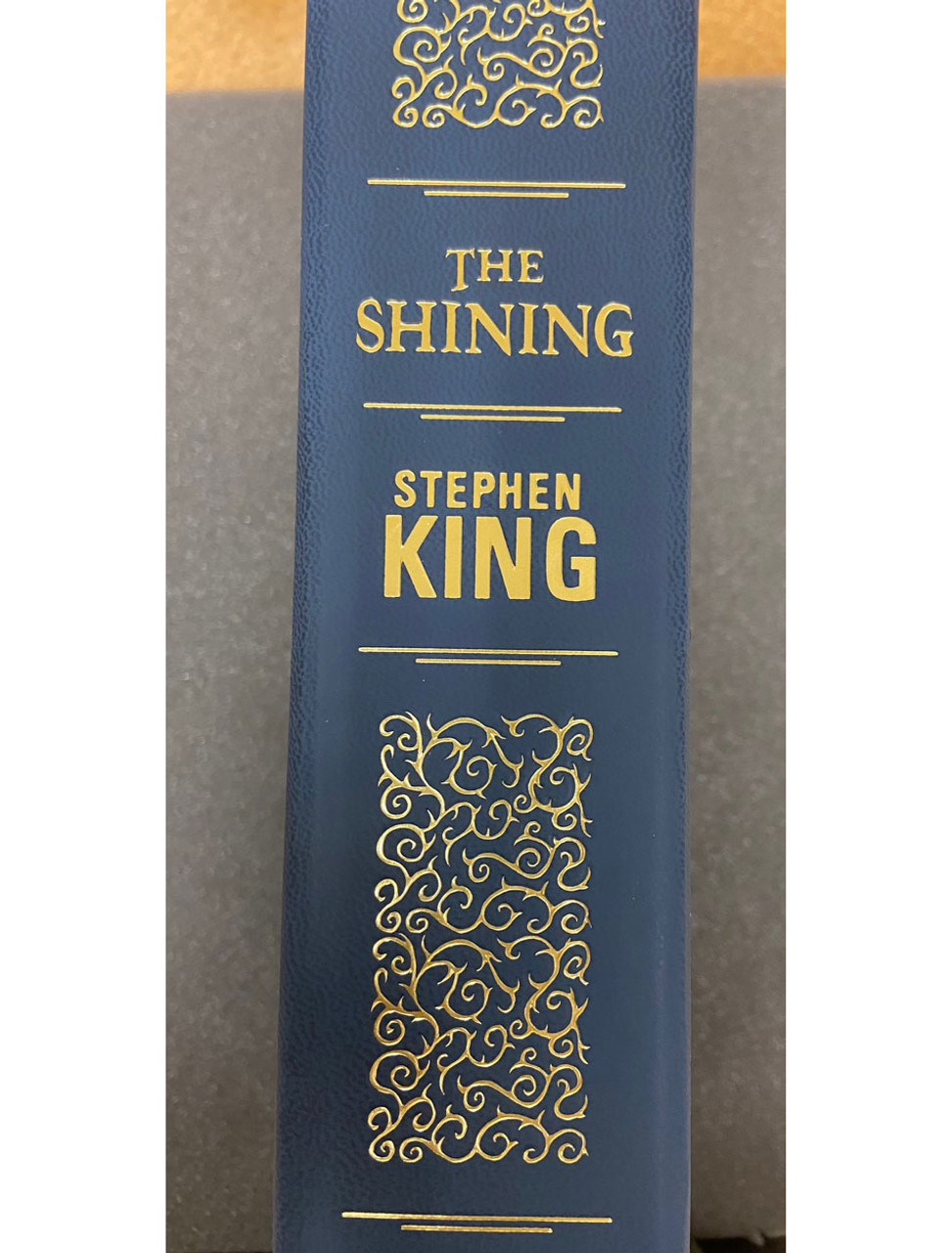 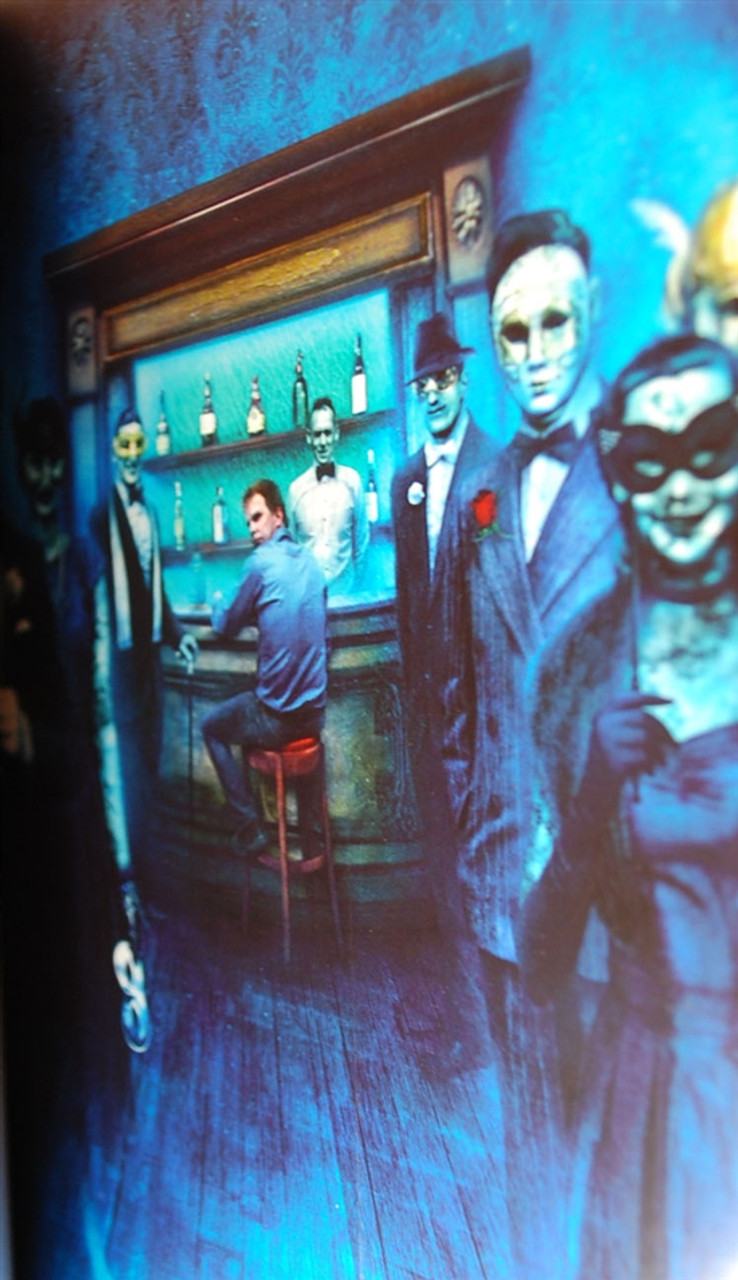 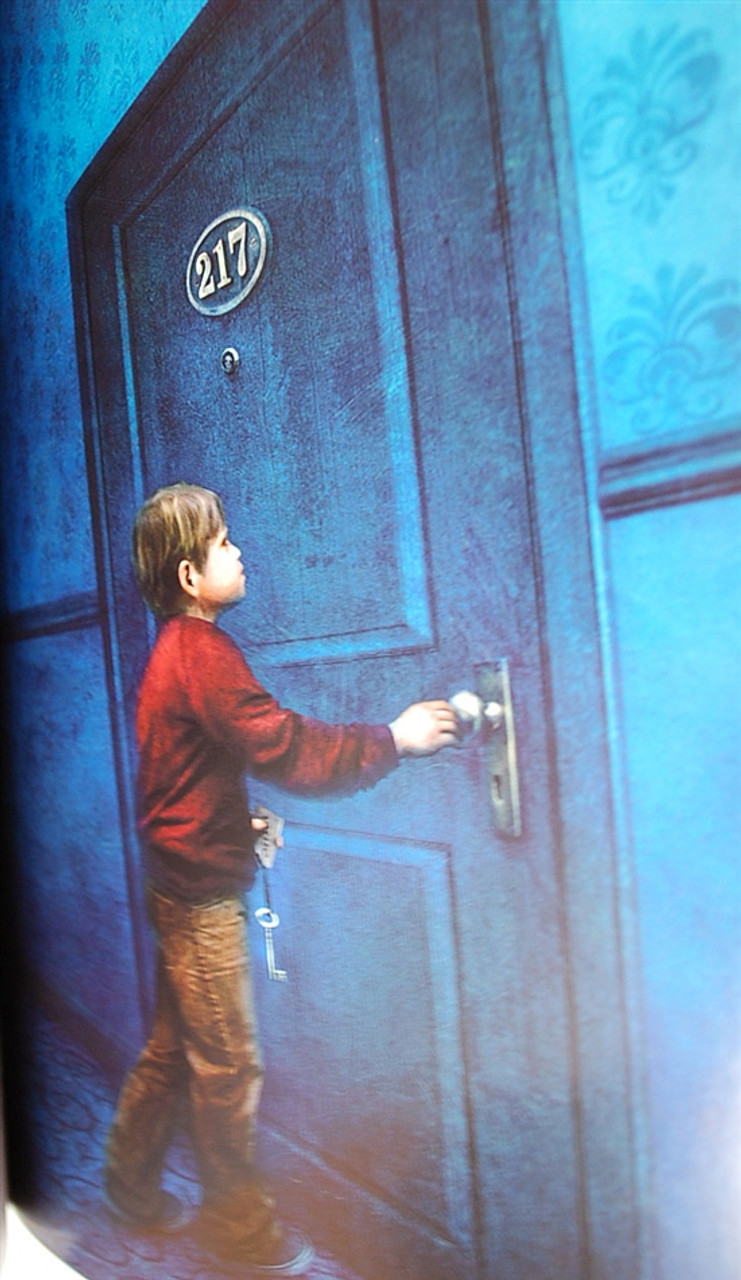 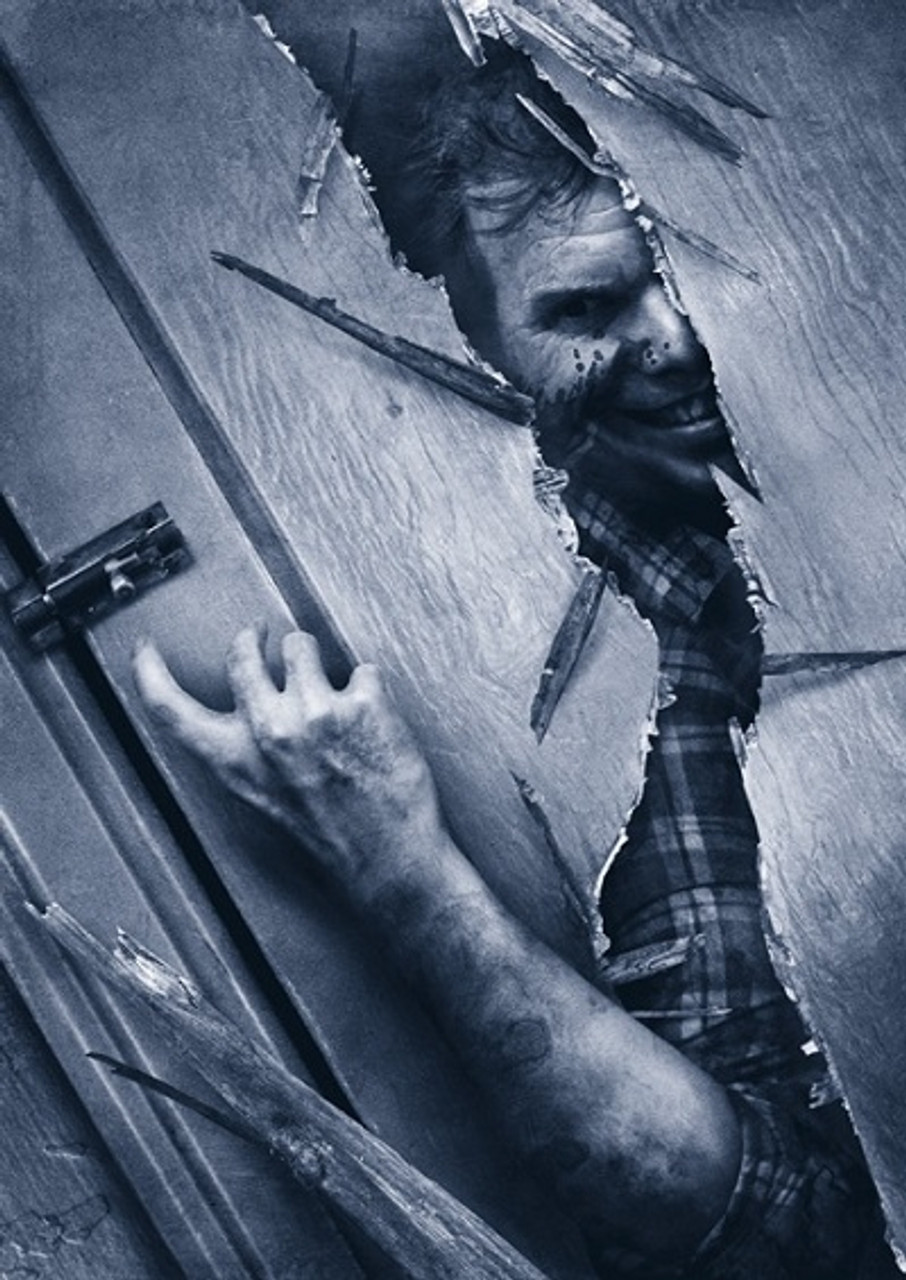 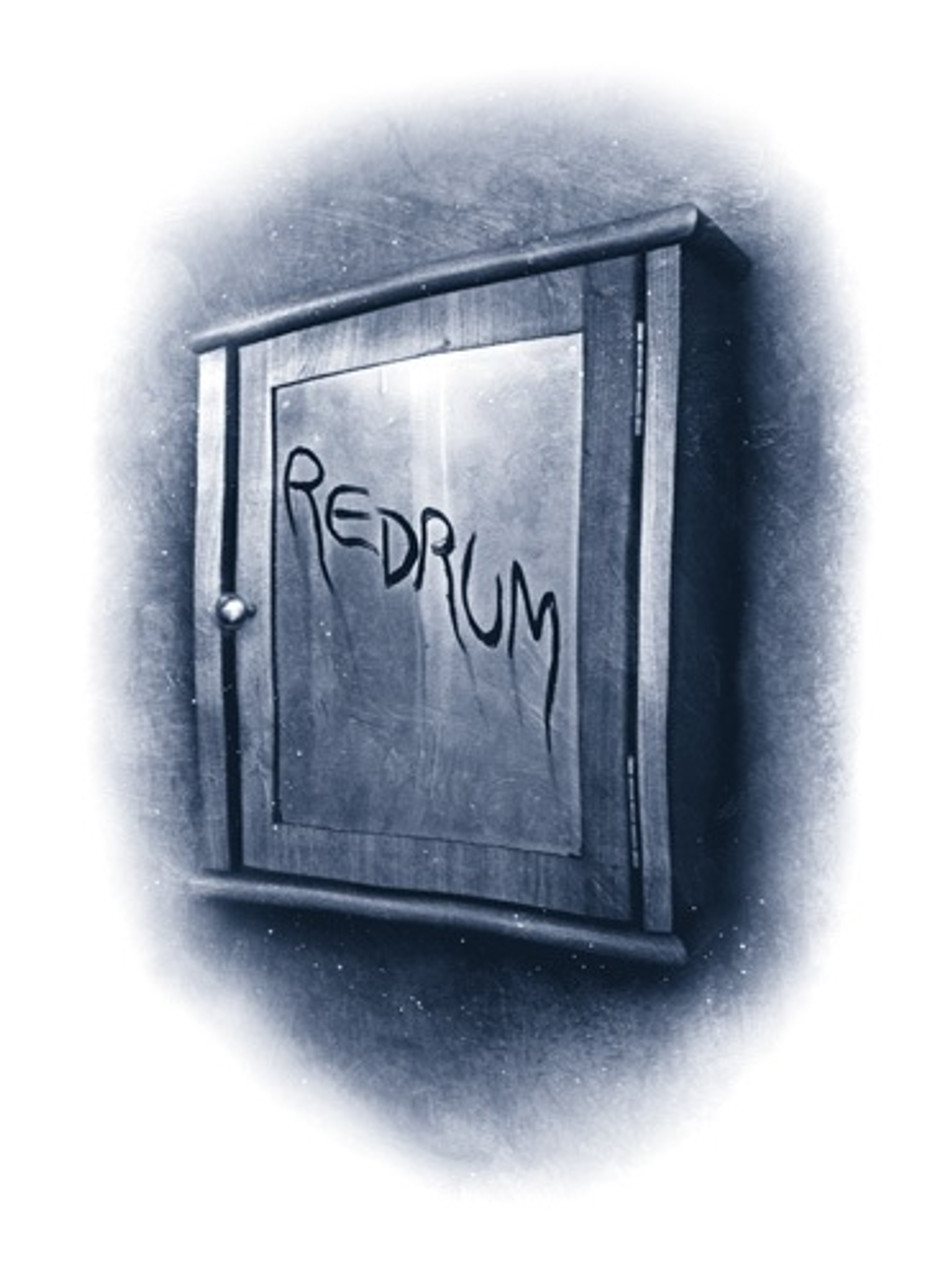 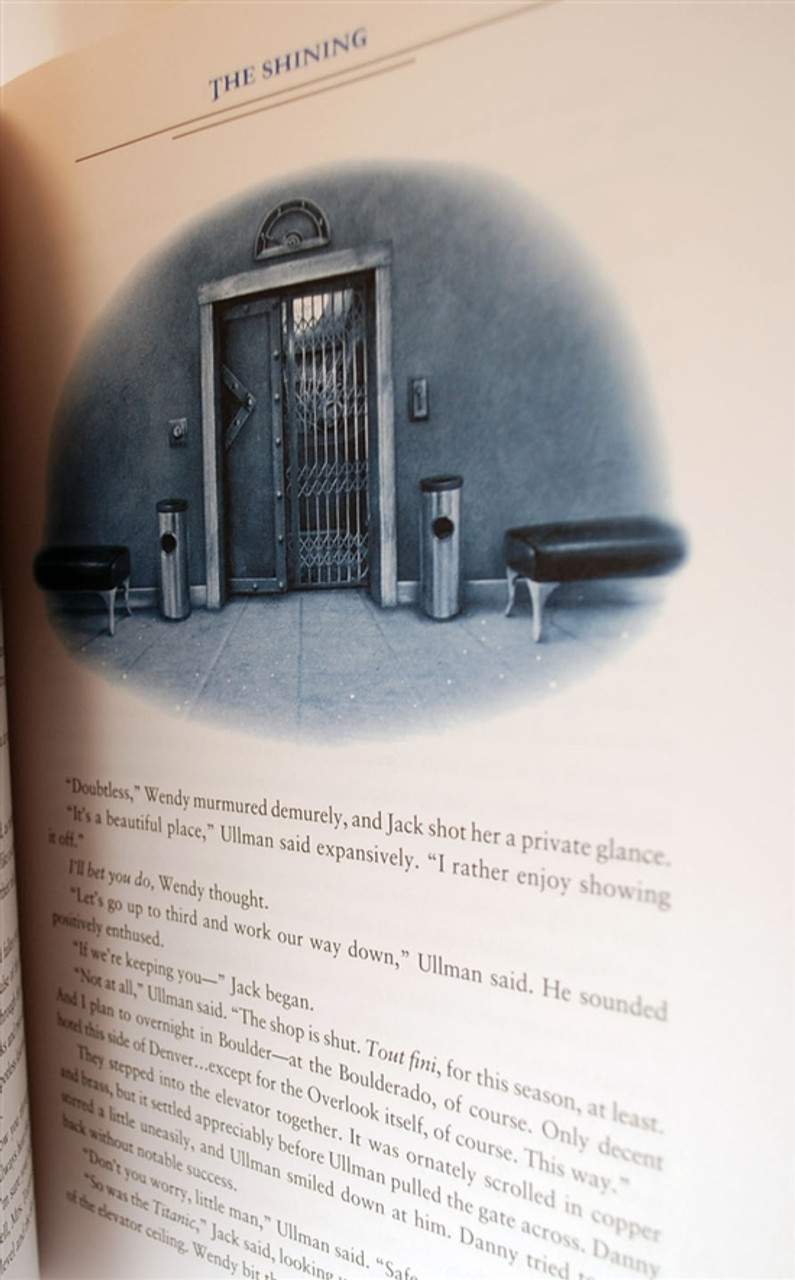 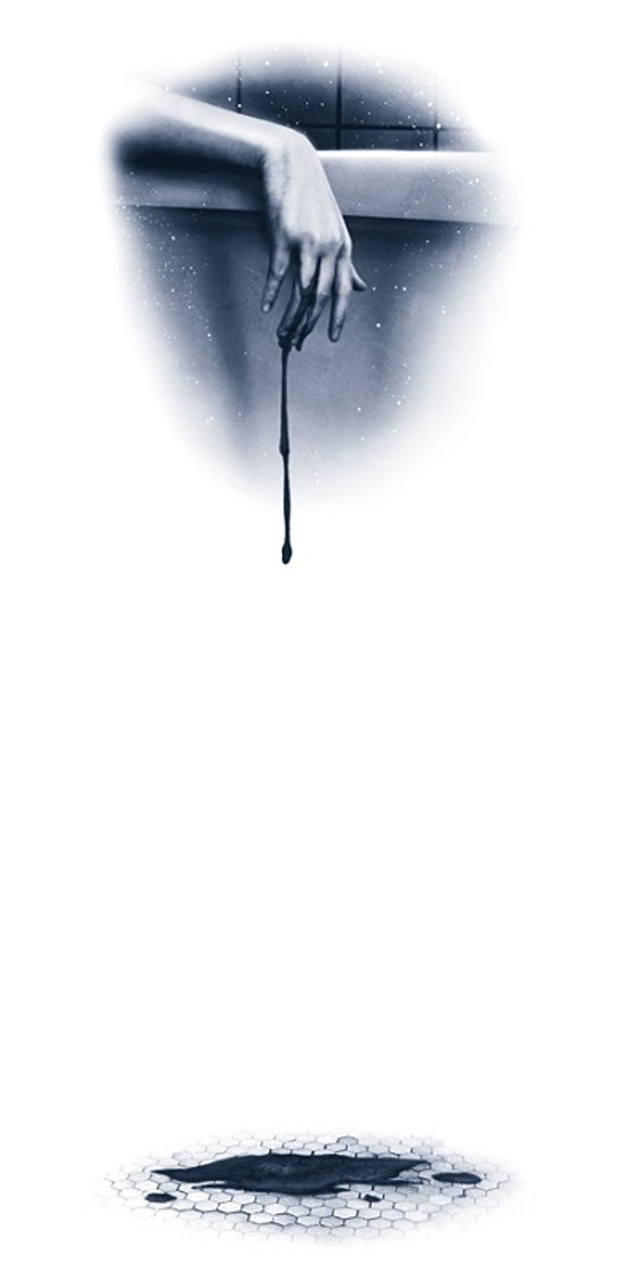 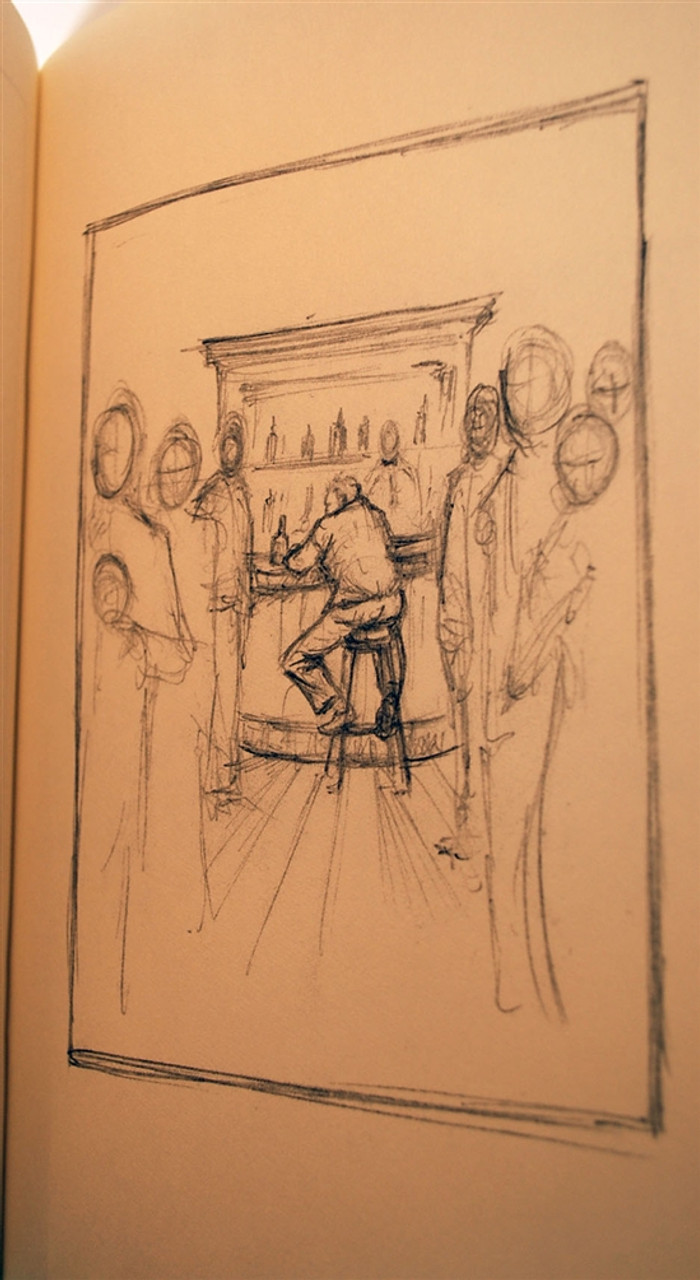 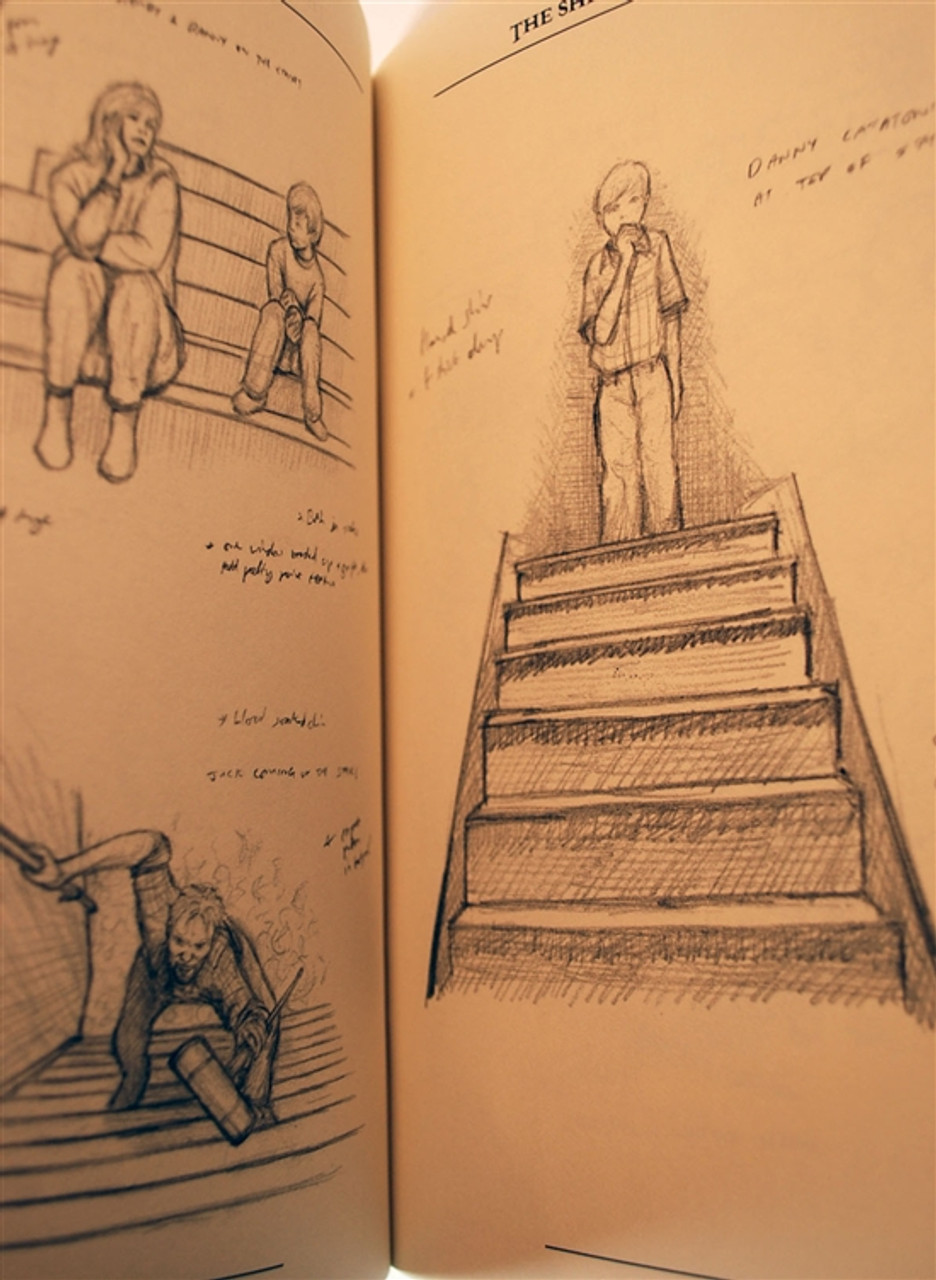 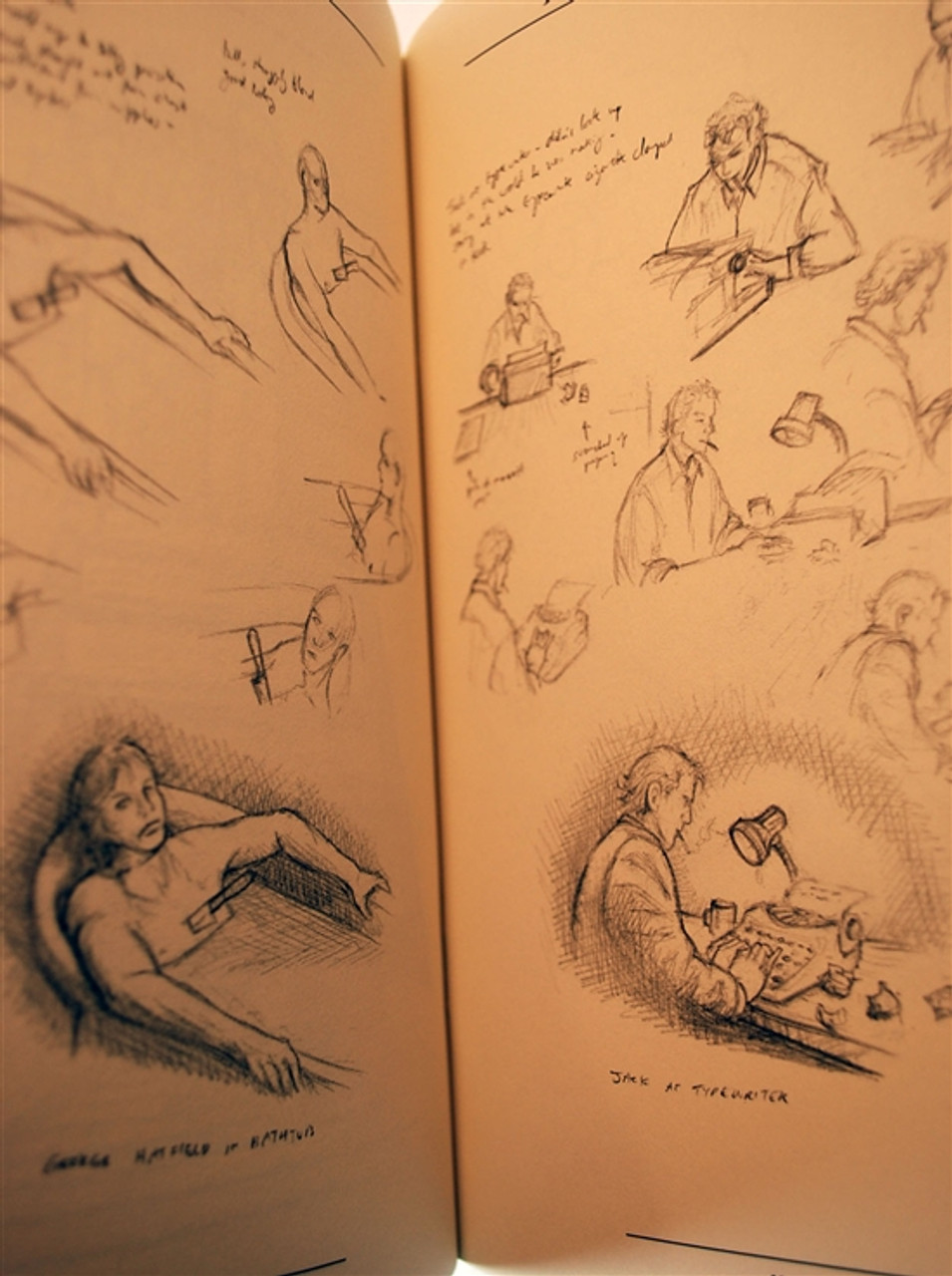 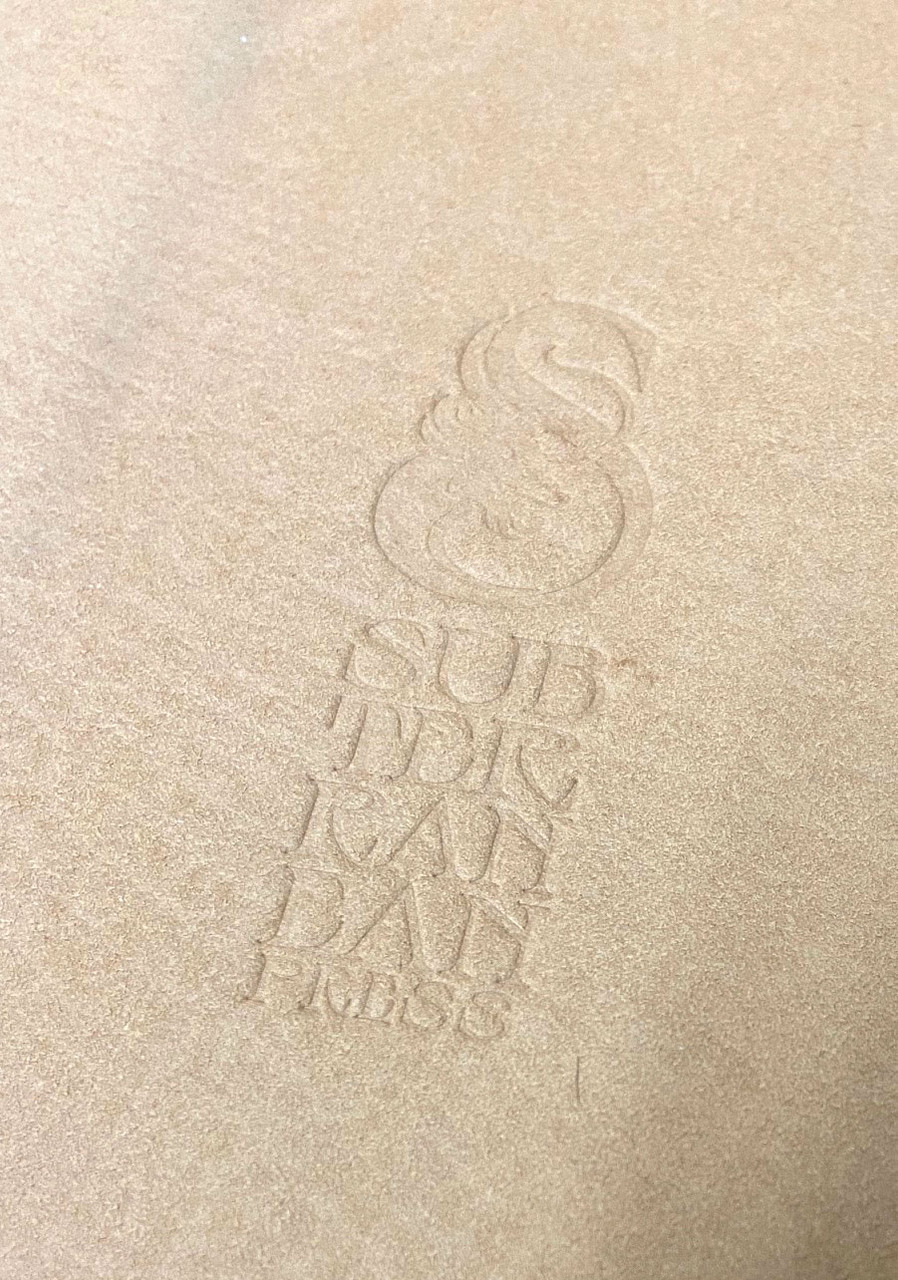 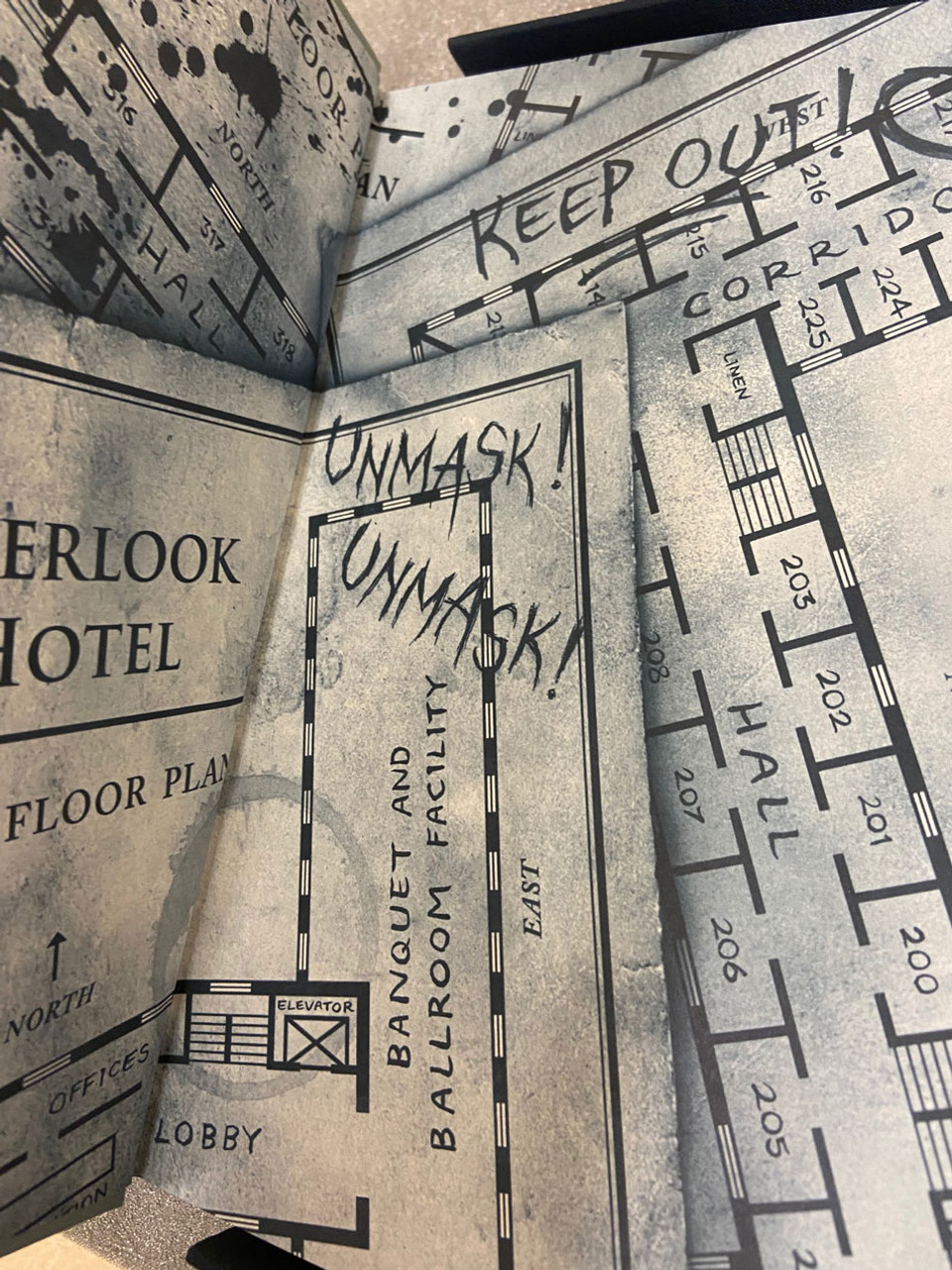 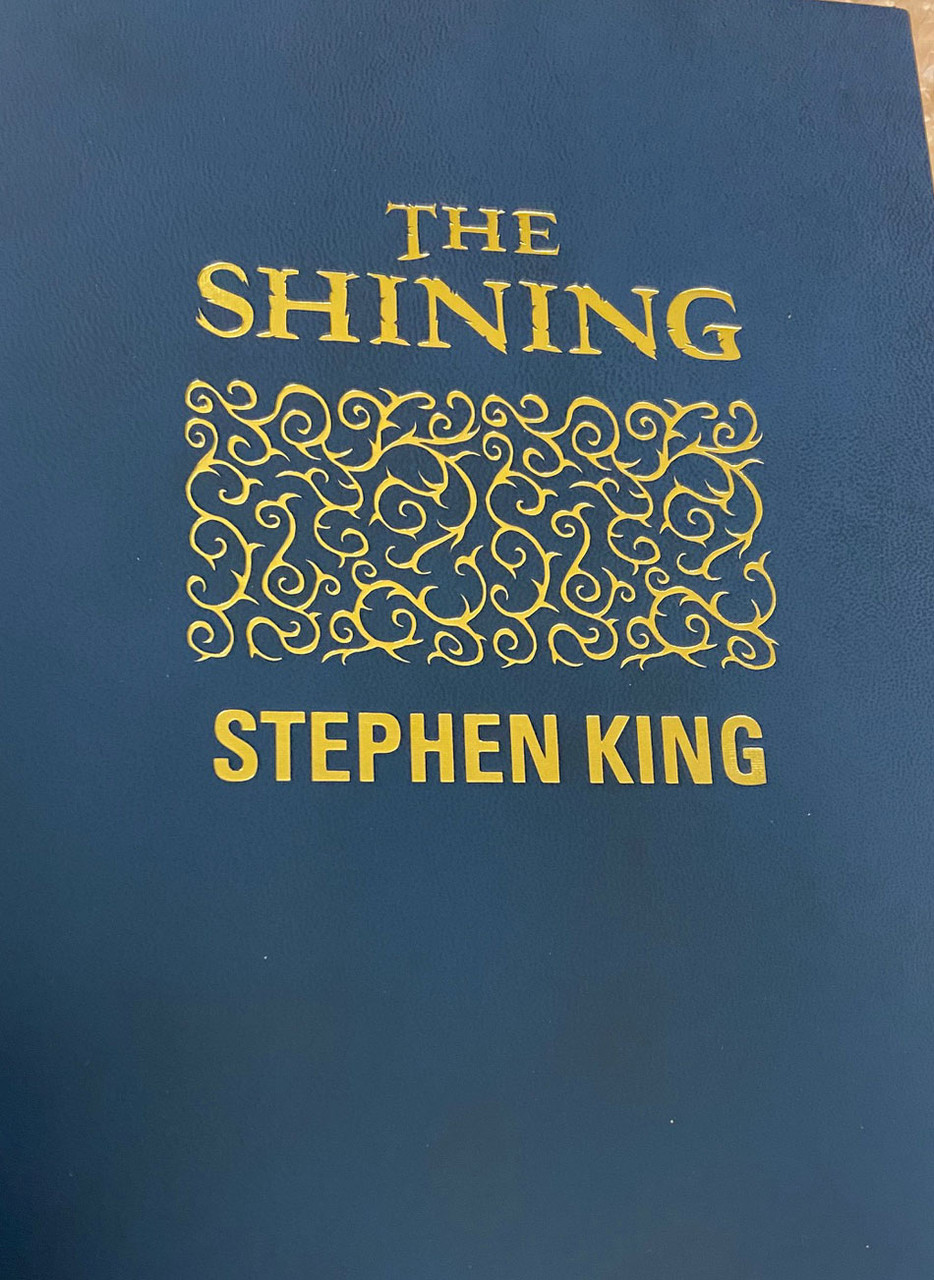 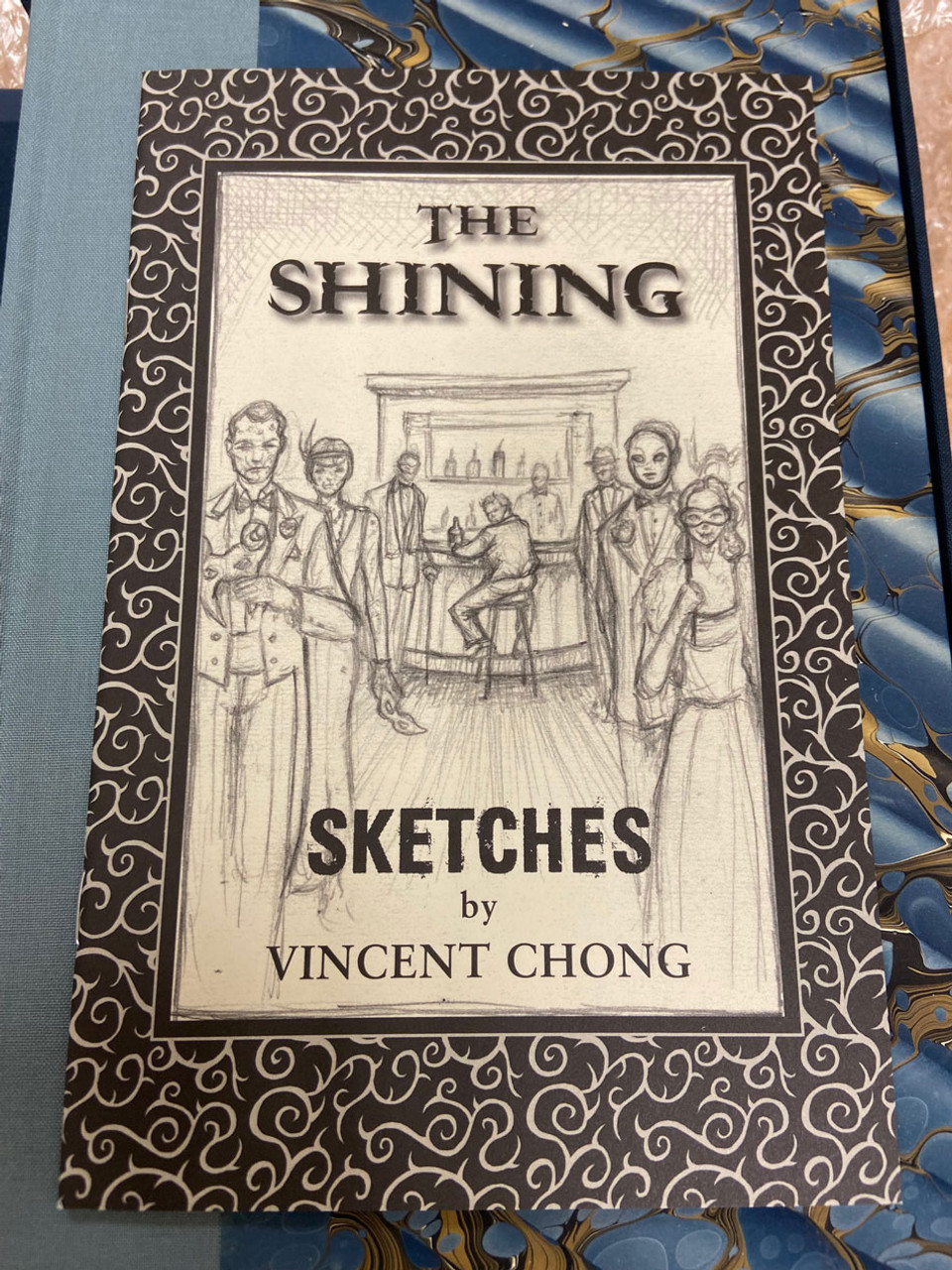 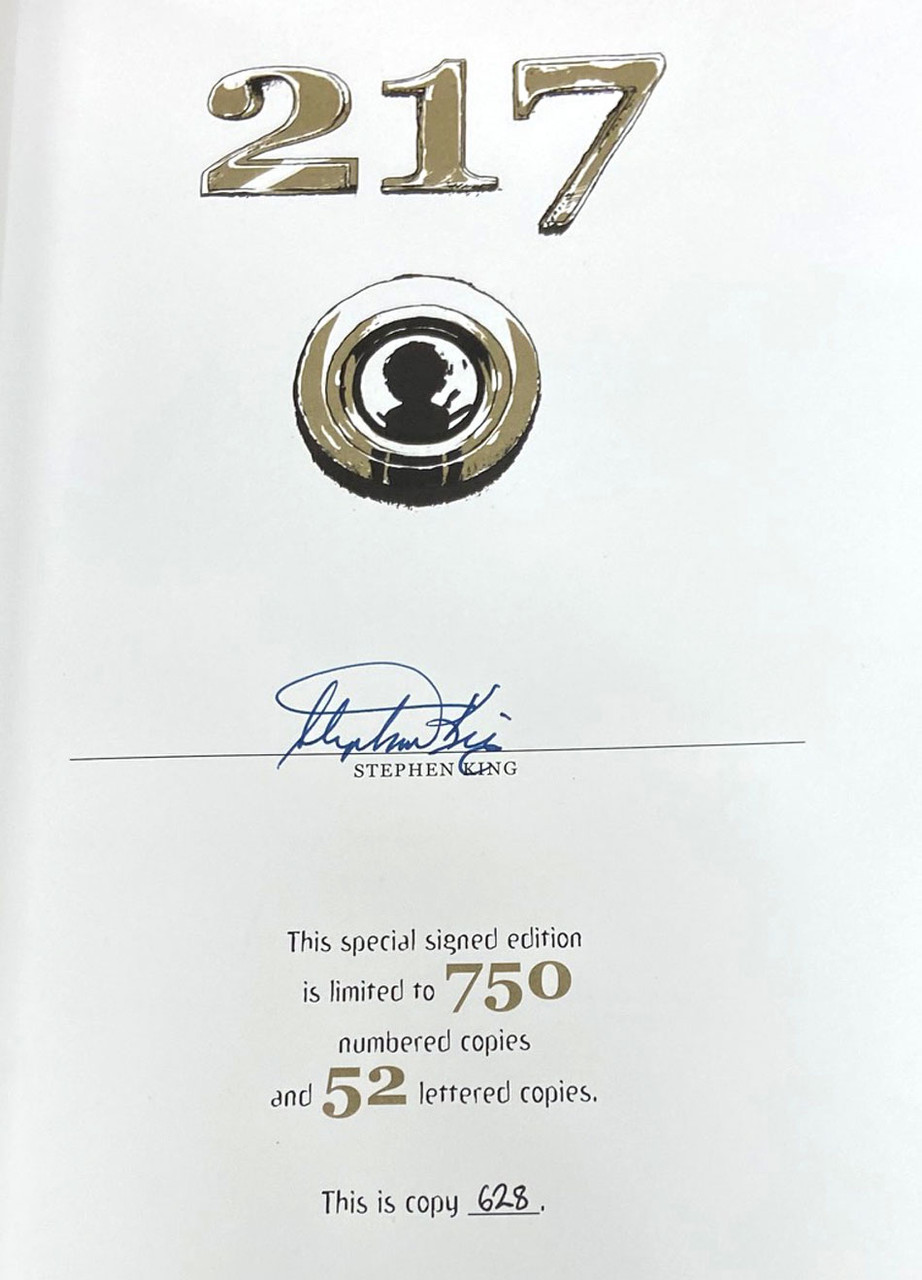 Personally signed by the legendary author Stephen King along with the illustrator Vincent Chong.

THIS LUXURIOUS COLLECTOR'S EDITION IS LIMITED TO ONLY 750

Subterranean Press 2013. Stephen King "The Shining" Signed Limited Edition. Limited to only 750 signed and numbered copies, each one personally signed by Stephen King directly onto the limitation page. This edition is also signed by the illustrator Vincent Chong on the following page. This special edition is housed in a custom leather bound tray-case. Dust jacket and interior illustrations by Vincent Chong. Signature Page illustration by Dagmara Matuszak. 500 pages. Includes a softcover booklet of The Shining Sketches by the artist Vincent Chong. This is number 628. This item does not includes the after market dust-jacket which was produced by the publisher after the original publication.


This edition is now OUT OF PRINT and Sold Out from the publisher.

Before Doctor Sleep, there was The Shining, a classic of modern American horror from the undisputed master, Stephen King.

About (from the publisher)

When The Shining was first published in 1977, it left an immediate and indelible impression. At once terrifying and intensely human, it set the standard for the modern horror novel, and remains as vital and affecting today as it was thirty-five years ago.

The story The Shining tells has assumed a permanent place in American popular culture. It is, first of all, the story of a family: Jack and Wendy Torrance and their extraordinarily gifted son, Danny. The Torrances are a family in crisis. They have come to the Overlook Hotel, a deluxe resort set in an isolated corner of the Colorado Rockies, to serve as winter caretakers and to recover from a series of bruising personal defeats. But, as they soon discover, the Overlook is more than a hotel. It is a malign, voracious entity with an extravagantly violent history, and it is determined to absorb the Torrance familyDanny in particularinto its dark heart.

The Shining is a novel in which all of the varied elementsscenes, setting, charactercome triumphantly together. The Overlook Hotel, with its haunted rooms, elaborate traps, and twisted secrets, is one of the most compelling backdrops in all of horror fiction. And the Torrances, with their tragic flaws, hidden wounds, and profound, often frustrated love for one another, are as real and credible as the people we encounter in our everyday lives. The result is a novel with the narrative power and emotional resonance of a classic. It is, and will always be, a consummate example of the storytellers art.

The Subterranean Press edition of The Shining is printed in two colors throughout.

The Shining stands as a cultural icon of modern horror, a searing study of a family torn apart, and a nightmarish glimpse into the dark recesses of human weakness and dementia.

Stephen Edwin King (born September 21, 1947) is an American author of horror, supernatural fiction, suspense, crime, science-fiction, and fantasy novels. His books have sold more than 350 million copies, and many have been adapted into films, television series, miniseries, and comic books. King has published 63 novels, including seven under the pen name Richard Bachman, and five non-fiction books. He has also written approximately 200 short stories, most of which have been published in book collections.

King has received Bram Stoker Awards, World Fantasy Awards, and British Fantasy Society Awards. In 2003, the National Book Foundation awarded him the Medal for Distinguished Contribution to American Letters. He has also received awards for his contribution to literature for his entire bibliography, such as the 2004 World Fantasy Award for Life Achievement and the 2007 Grand Master Award from the Mystery Writers of America. In 2015, he was awarded with a National Medal of Arts from the U.S. National Endowment for the Arts for his contributions to literature.[8] He has been described as the "King of Horror", a play on his surname and a reference to his high standing in pop culture.

Very Fine. The hardcover book is Very Fine without any flaws. A wonderful bright clean copy without any markings, writings, or stamps. No attached bookplates or indication of any removed. A well cared for book, protected from any potential damage. Square and tight spine. Sharp corners that are not bumped.

The leather bound tray-case is also in Very Fine condition.