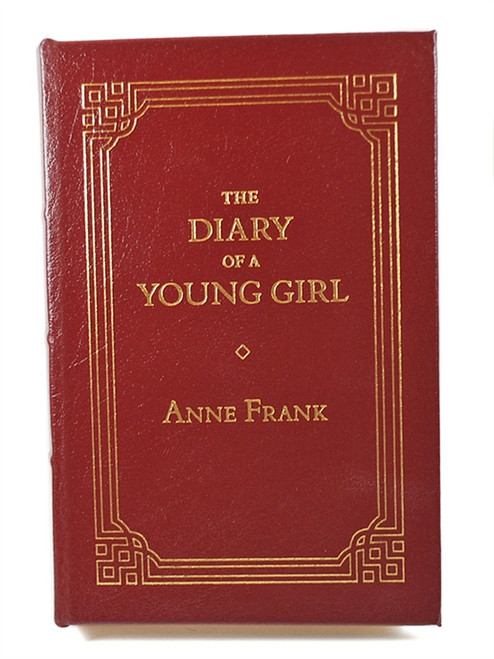 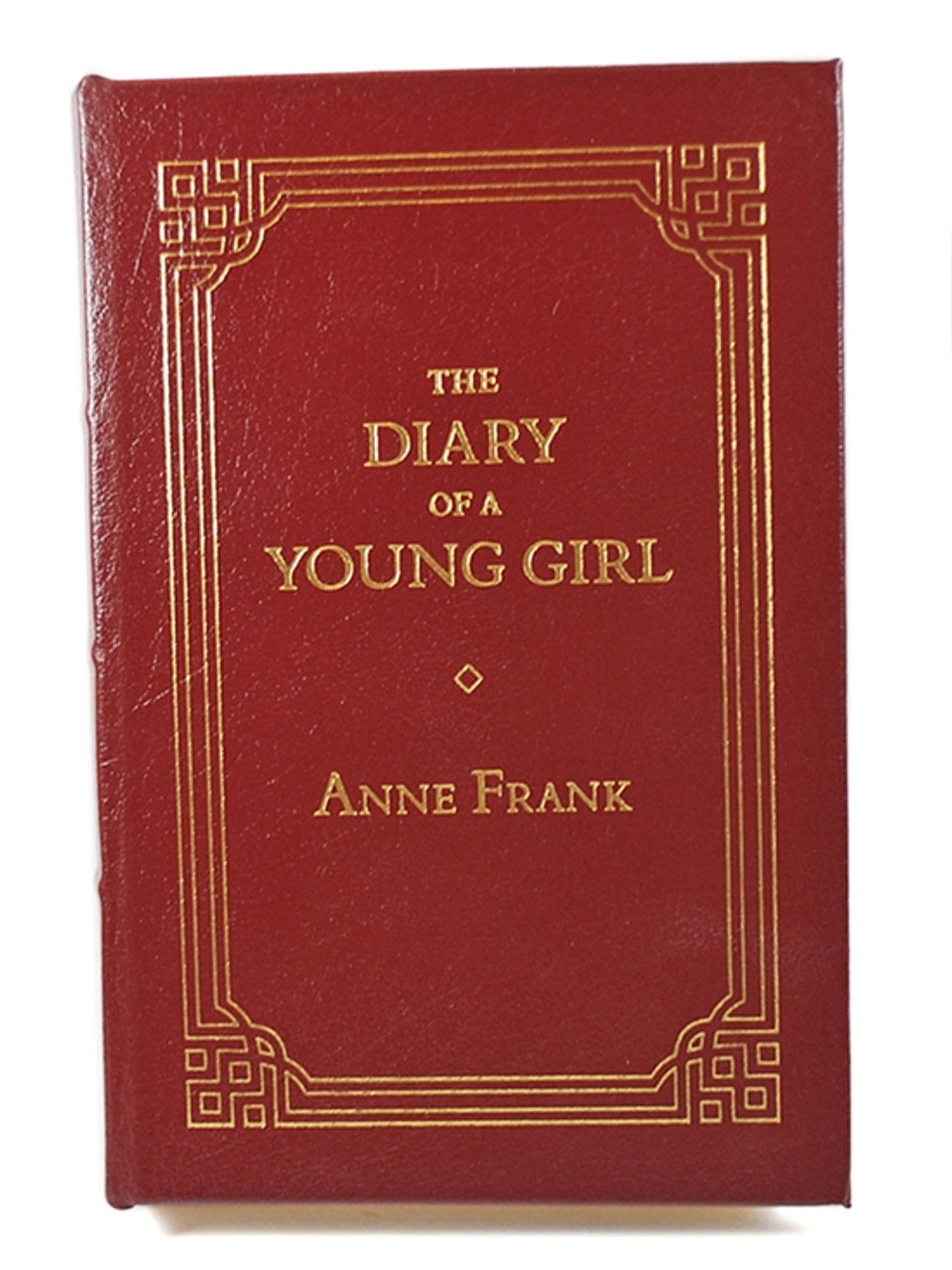 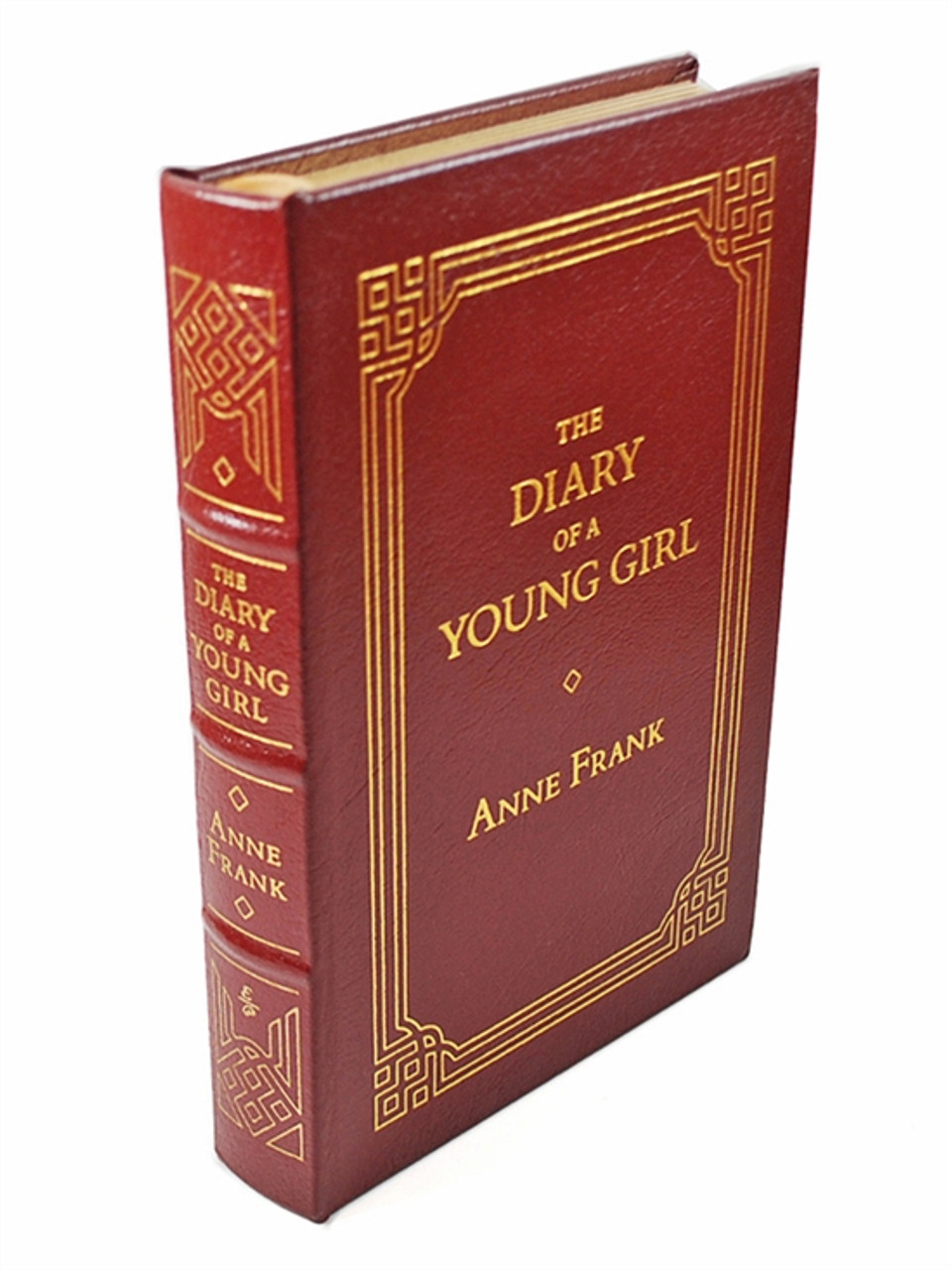 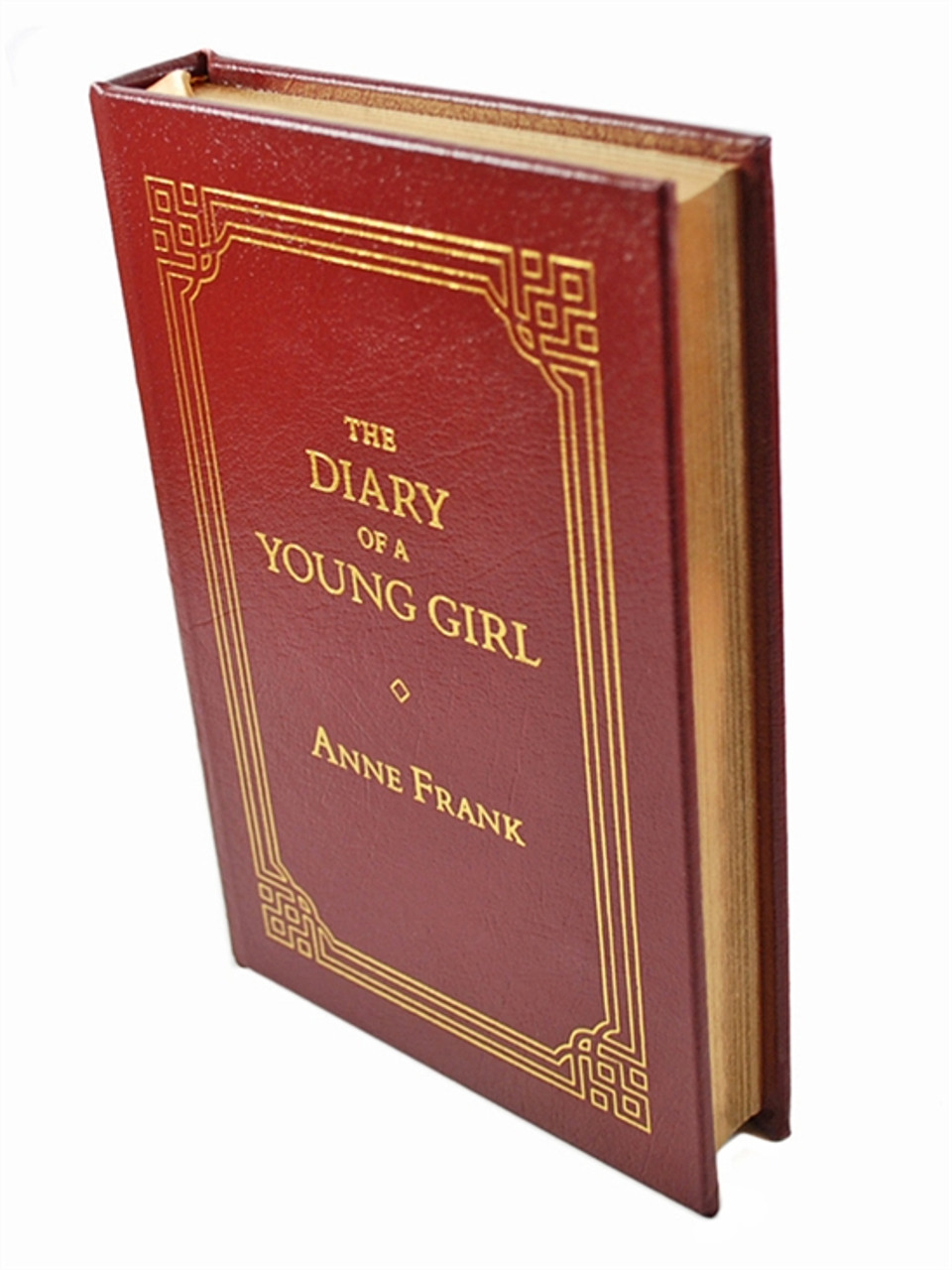 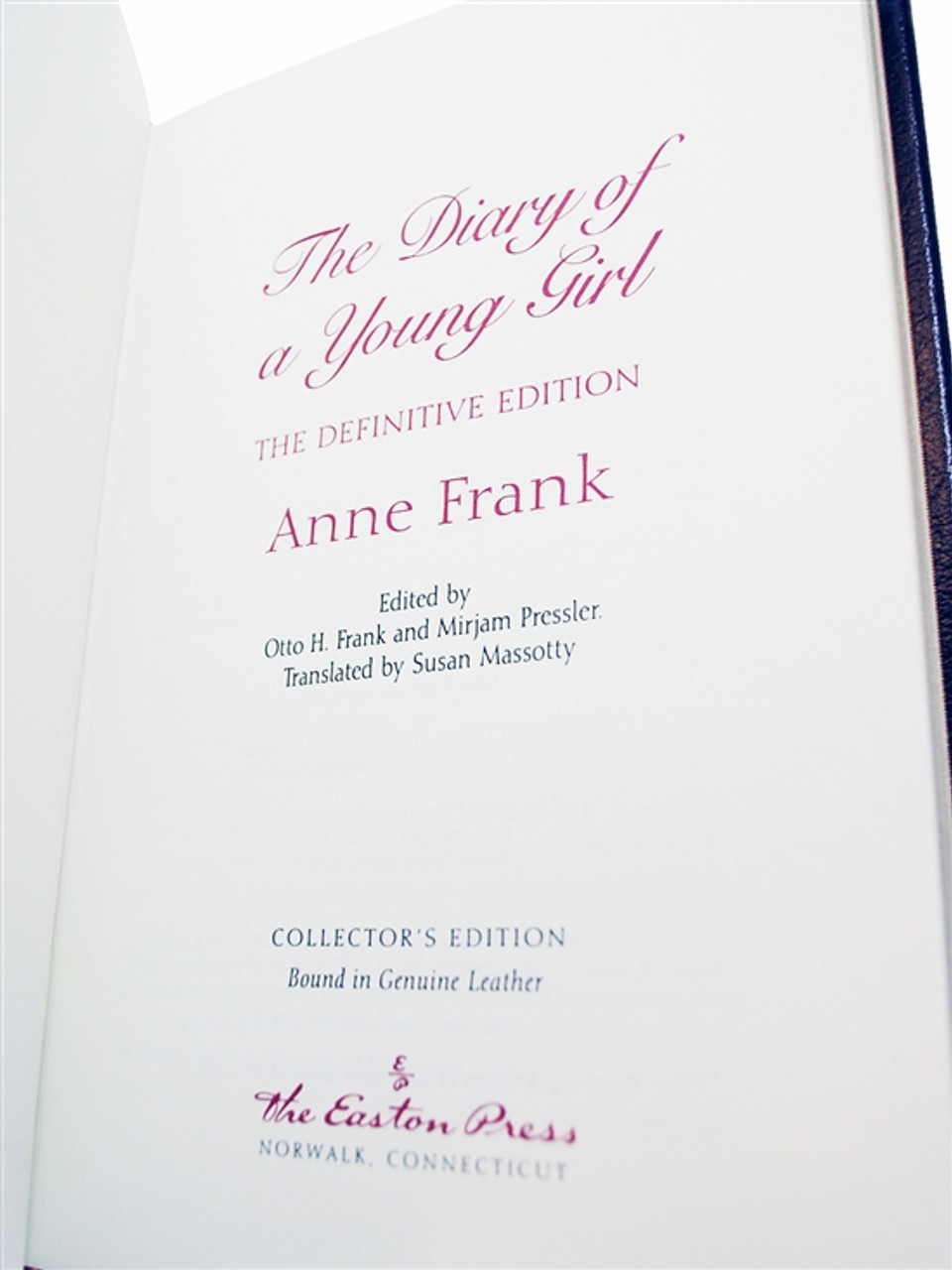 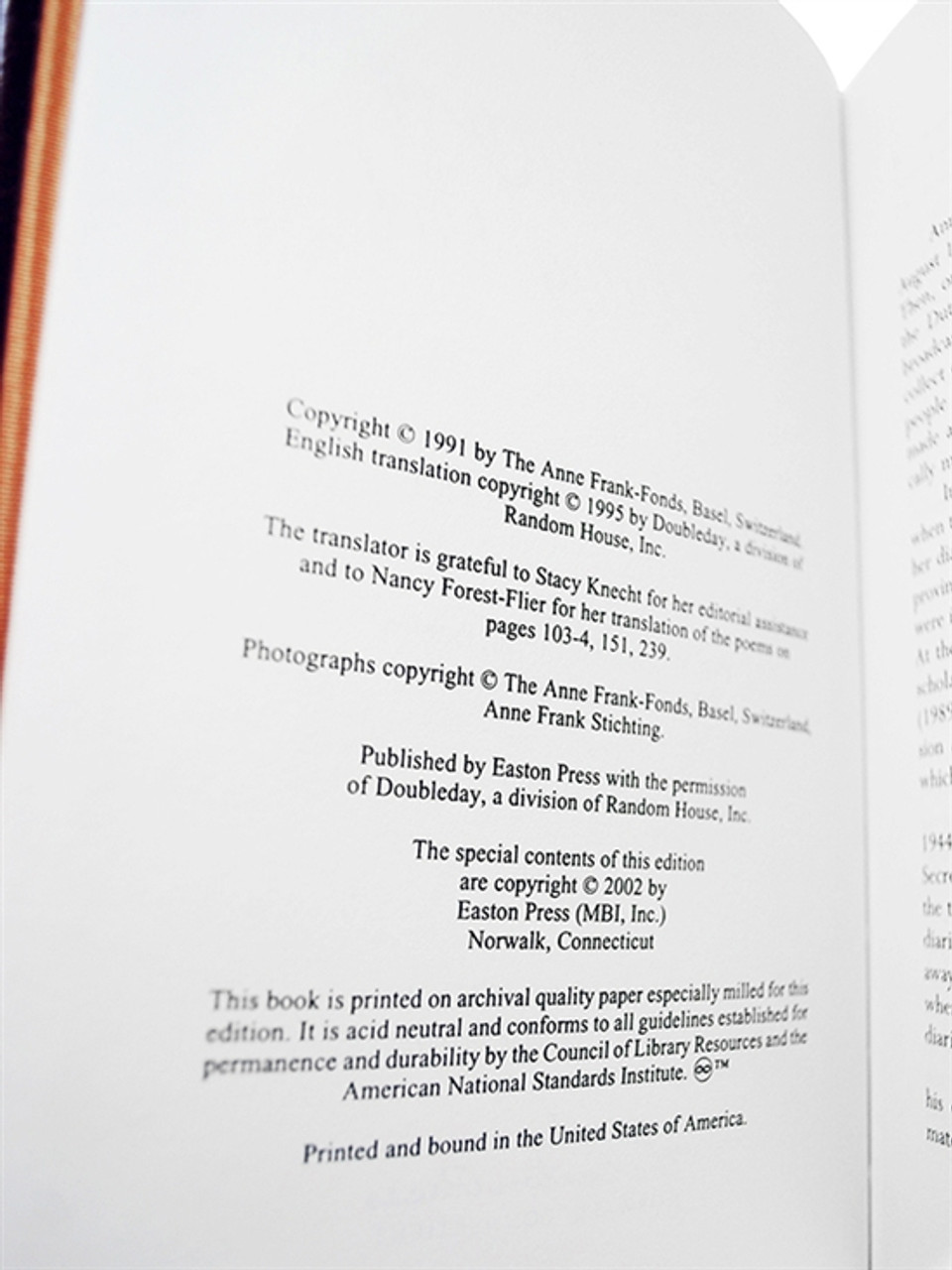 Easton Press, Norwalk CT. 2002. Anne Frank "The Diary of a Young Girl: The Definitive Edition". Edited by Otto H. Frank and Mirjam Pressler. Translated by Susan Massotty. A collector's edition luxuriously bound in full genuine leather. This special edition has been published as part of "The Books That Changed The World" collection by Easton Press.


About "The Diary of a Young Girl"

Discovered in the attic in which she spent the last years of her life, Anne Frank's remarkable diary has since become a world classic -- a powerful reminder of the horrors of war and an eloquent testament to the human spirit. In 1942, with Nazis occupying Holland, a thirteen-year-old Jewish girl and her family fled their home in Amsterdam and went into hiding. For the next two years, until their whereabouts were betrayed to the Gestapo, they and another family lived cloistered in the "Secret Annex" of an old office building. Cut off from the outside world, they faced hunger, boredom, the constant cruelties of living in confined quarters, and the ever-present threat of discovery and death. In her diary Anne Frank recorded vivid impressions of her experiences during this period. By turns thoughtful, moving, and amusing, her account offers a fascinating commentary on human courage and frailty and a compelling self-portrait of a sensitive and spirited young woman whose promise was tragically cut short.

Annelies "Anne" Marie Frank is one of the most discussed Jewish victims of the Holocaust. Her wartime diary The Diary of a Young Girl has been the basis for several plays and films. Born in the city of Frankfurt in Weimar Germany, she lived most of her life in or near Amsterdam, in the Netherlands. Born a German national, Frank lost her citizenship in 1941. She gained international fame posthumously after her diary was published. It documents her experiences hiding during the German occupation of the Netherlands in World War II.

The Frank family moved from Germany to Amsterdam in 1933, the year the Nazis gained control over Germany. By the beginning of 1940, they were trapped in Amsterdam by the German occupation of the Netherlands. As persecutions of the Jewish population increased in July 1942, the family went into hiding in some concealed rooms in the building where Anne's father worked. After two years, the group was betrayed and transported to concentration camps. Anne Frank and her sister, Margot Frank, were eventually transferred to the Bergen-Belsen concentration camp, where they died of typhus in March 1945.

Otto Frank, the only survivor of the family, returned to Amsterdam after the war to find that Anne's diary had been saved, and his efforts led to its publication in 1947. It has since been translated into many languages. It was translated from its original Dutch and first published in English in 1952 as The Diary of a Young Girl. The blank diary, which was given to Anne on her thirteenth birthday, chronicles her life from 12 June 1942 until 1 August 1944.