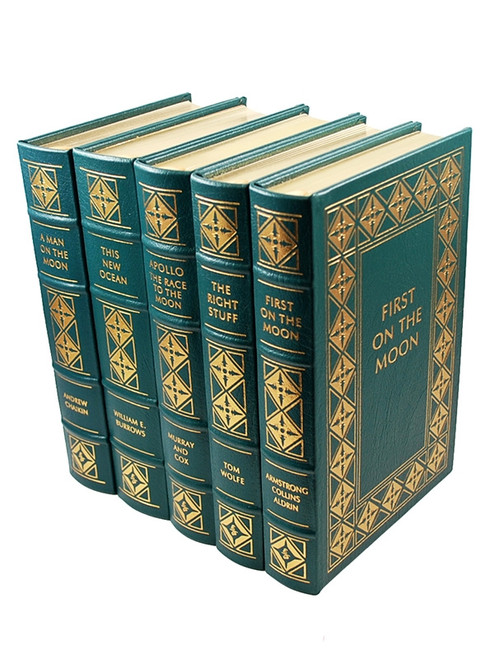 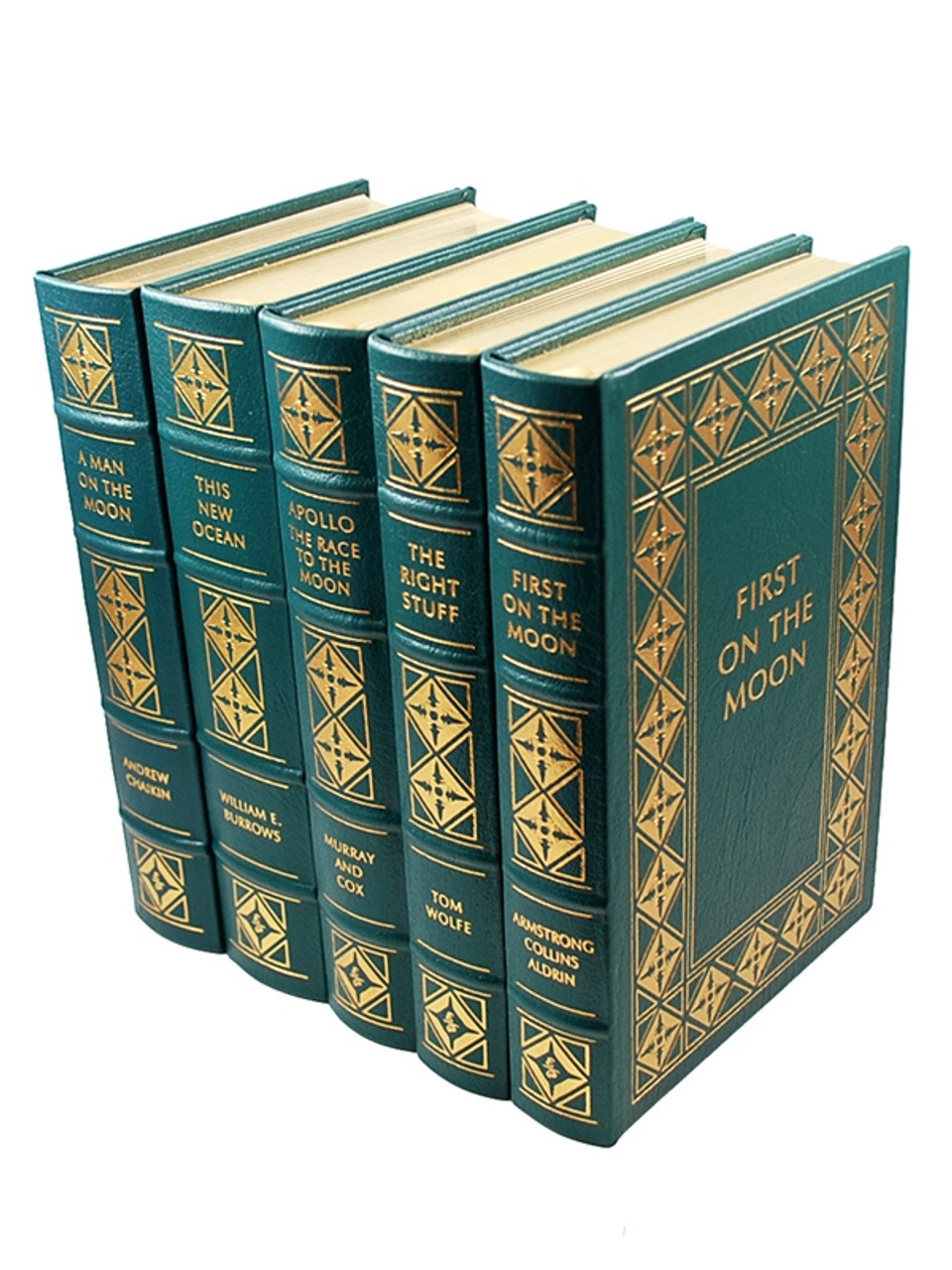 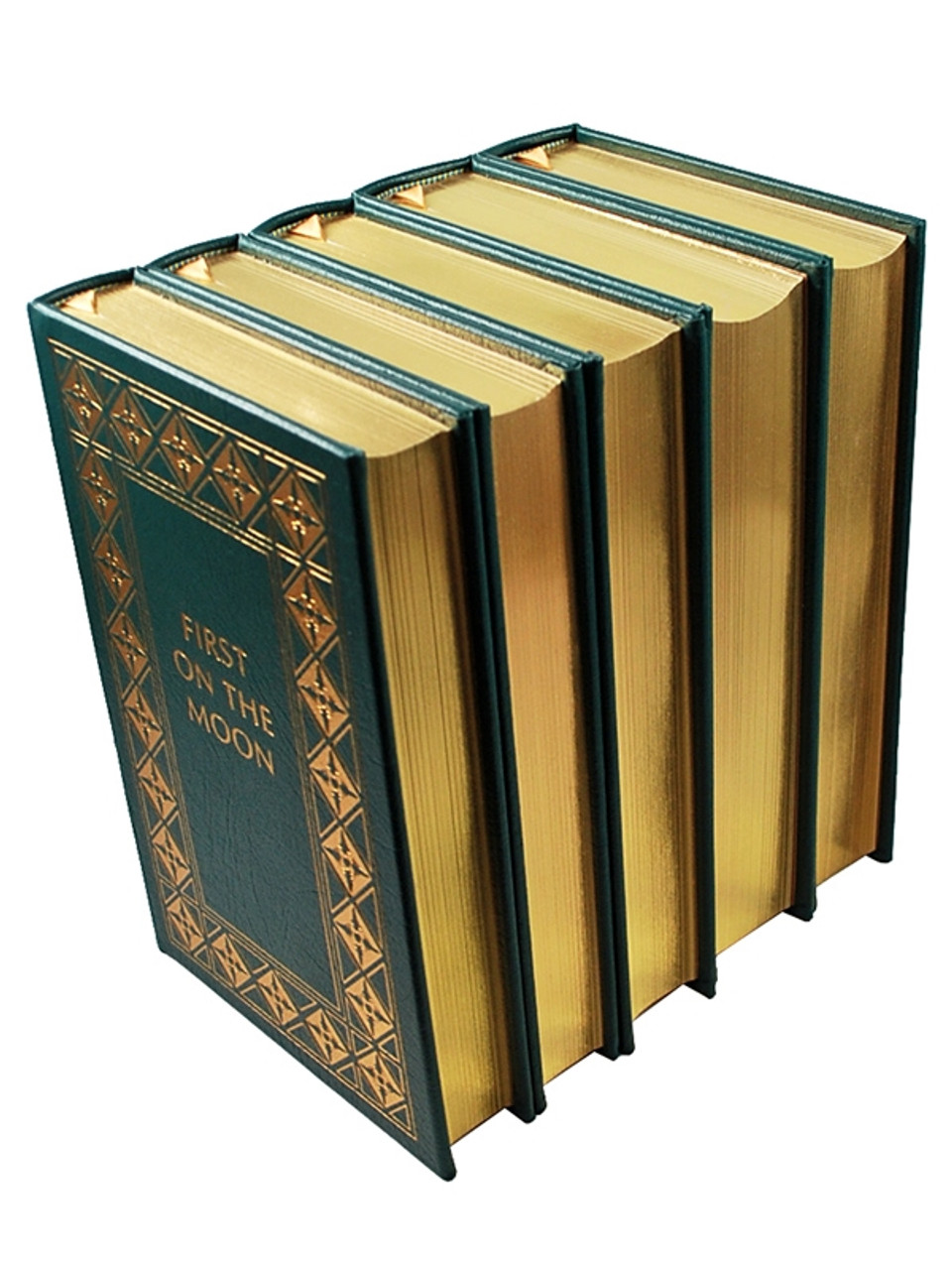 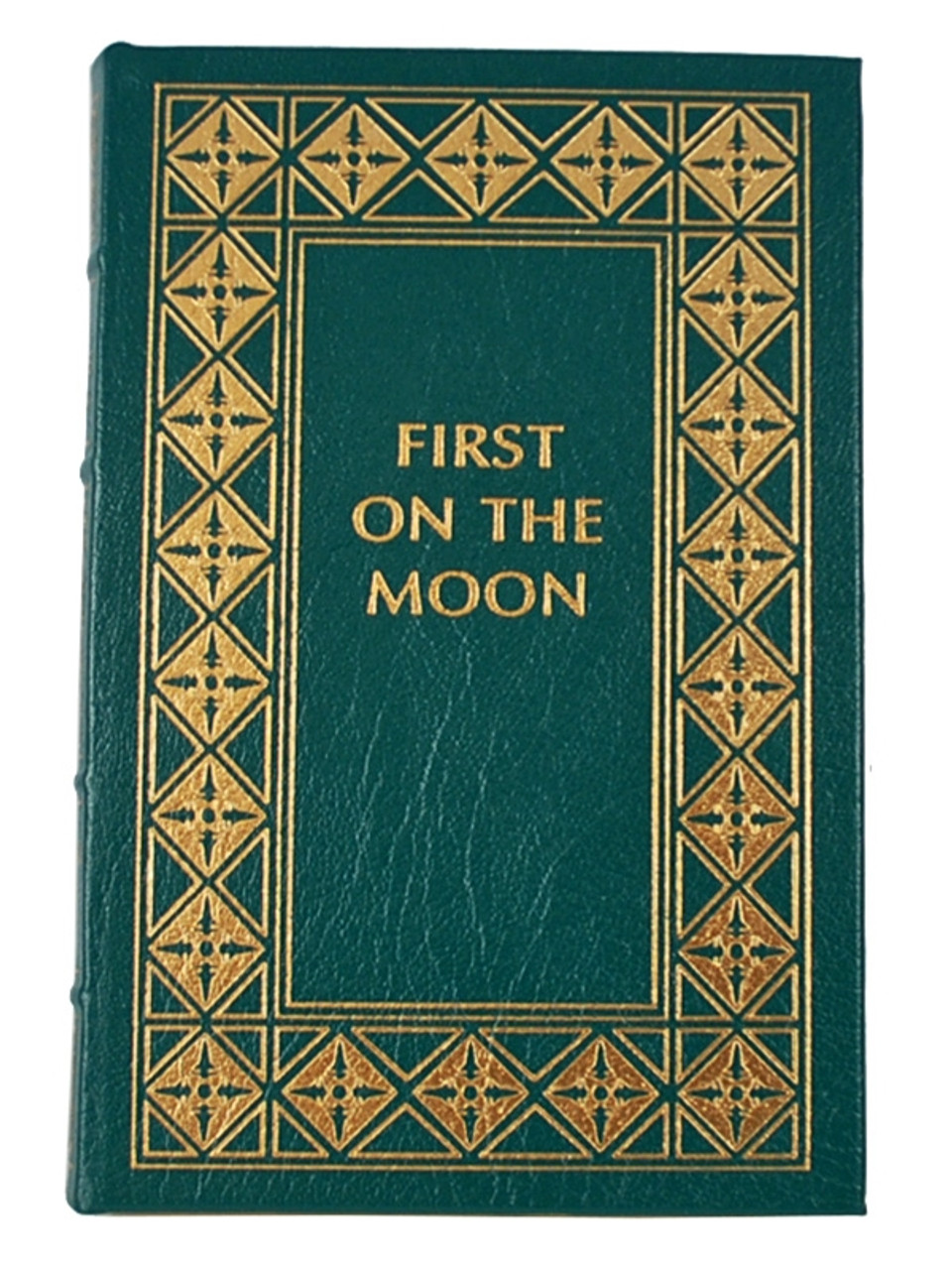 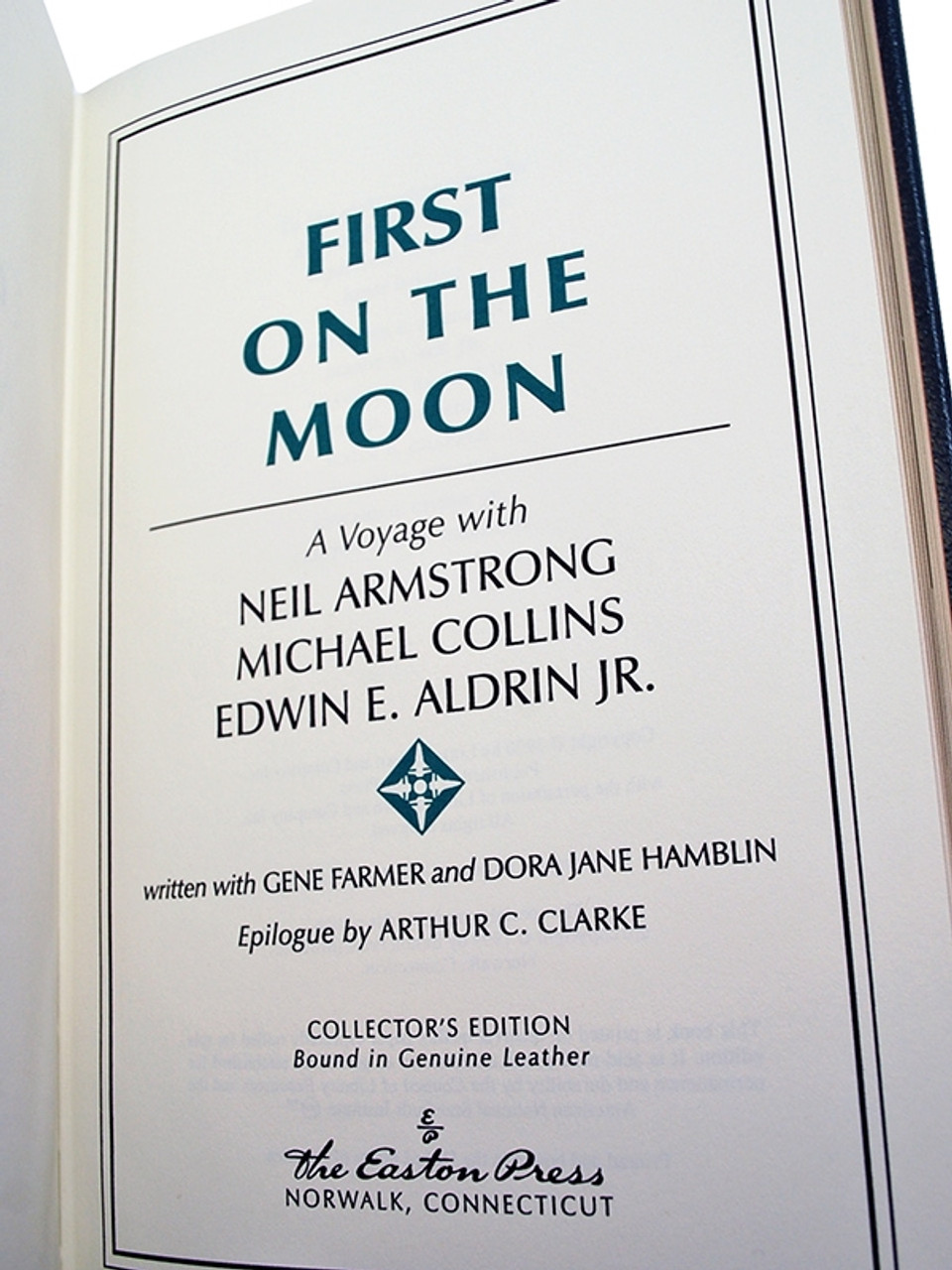 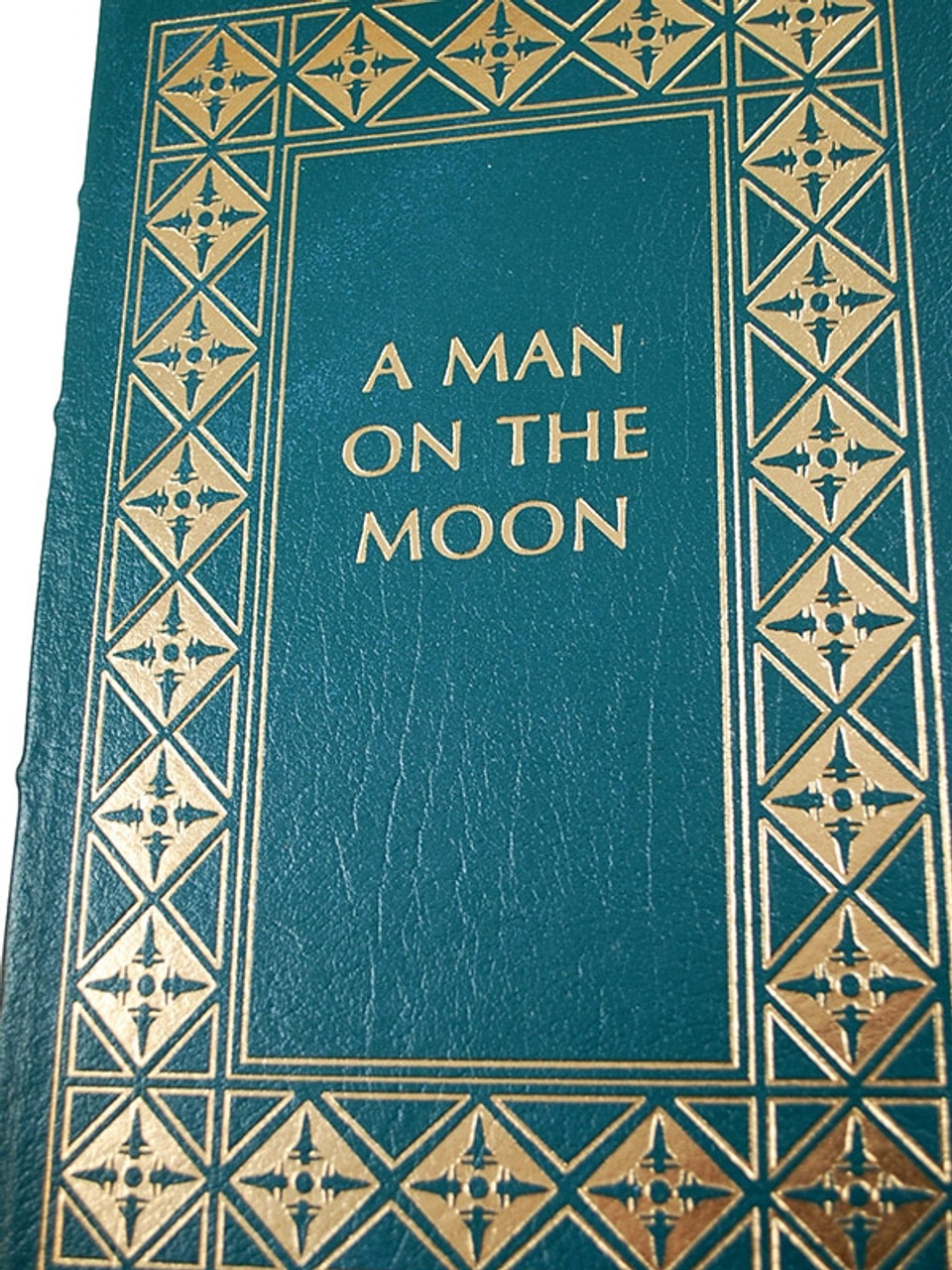 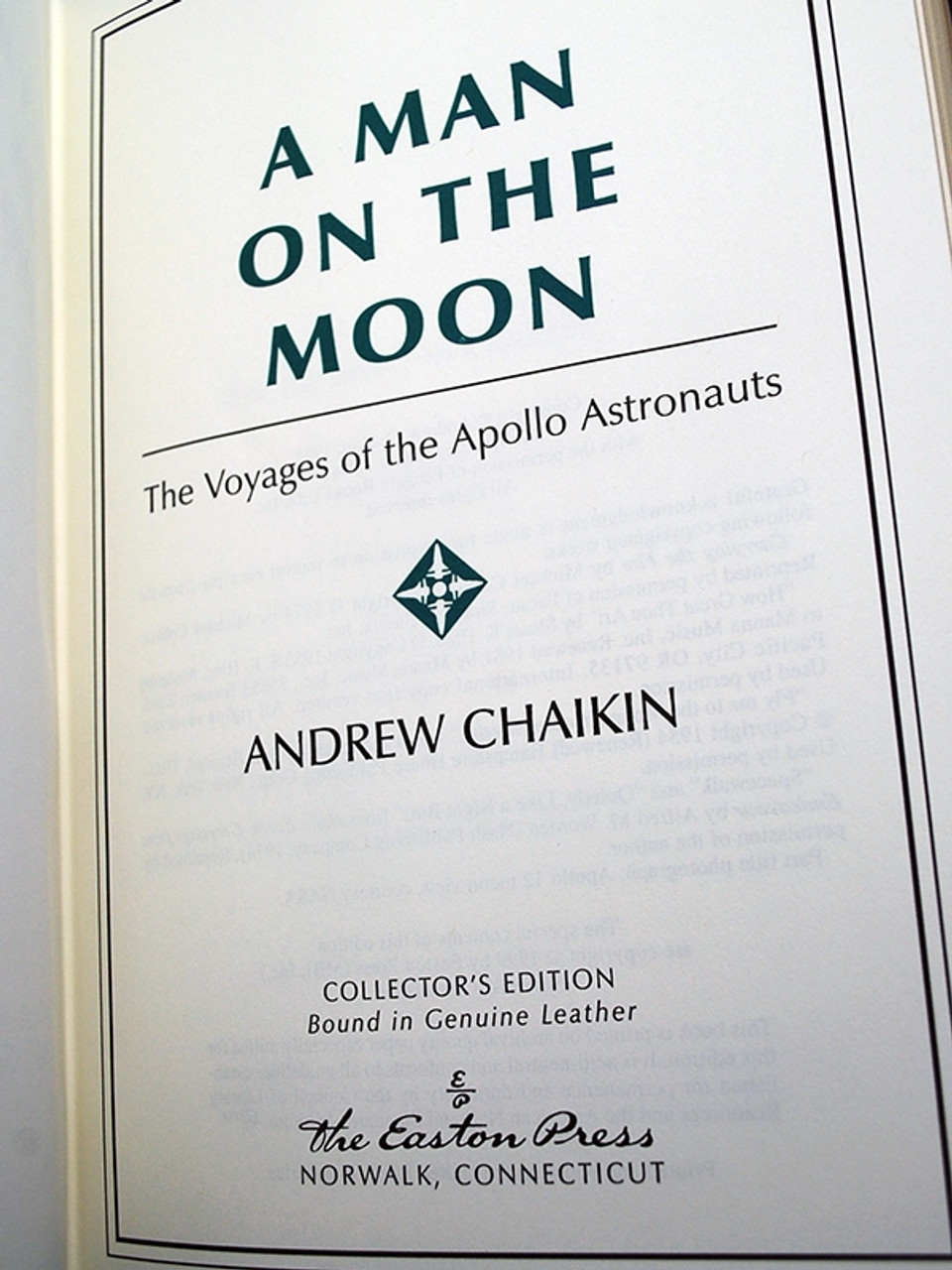 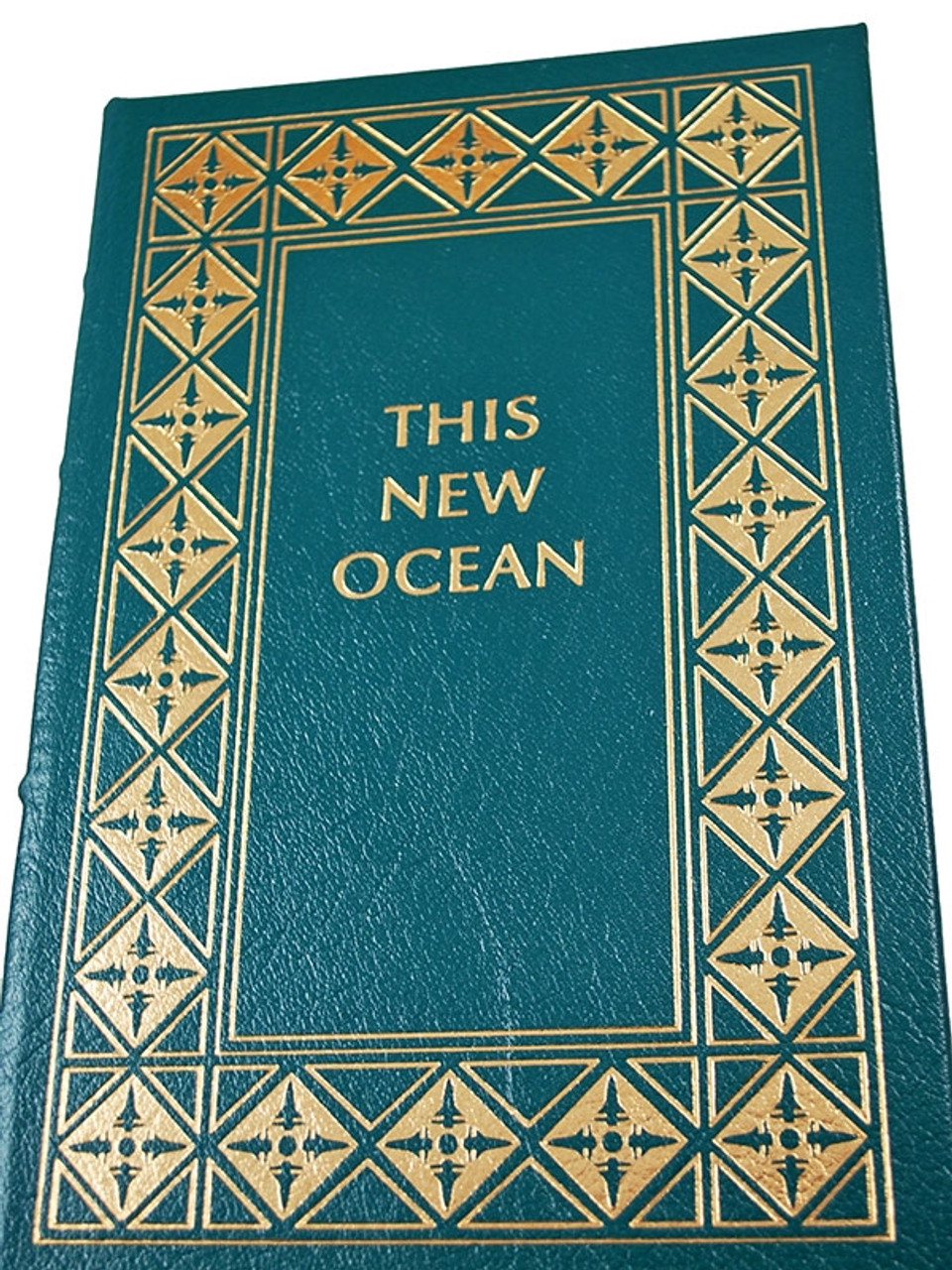 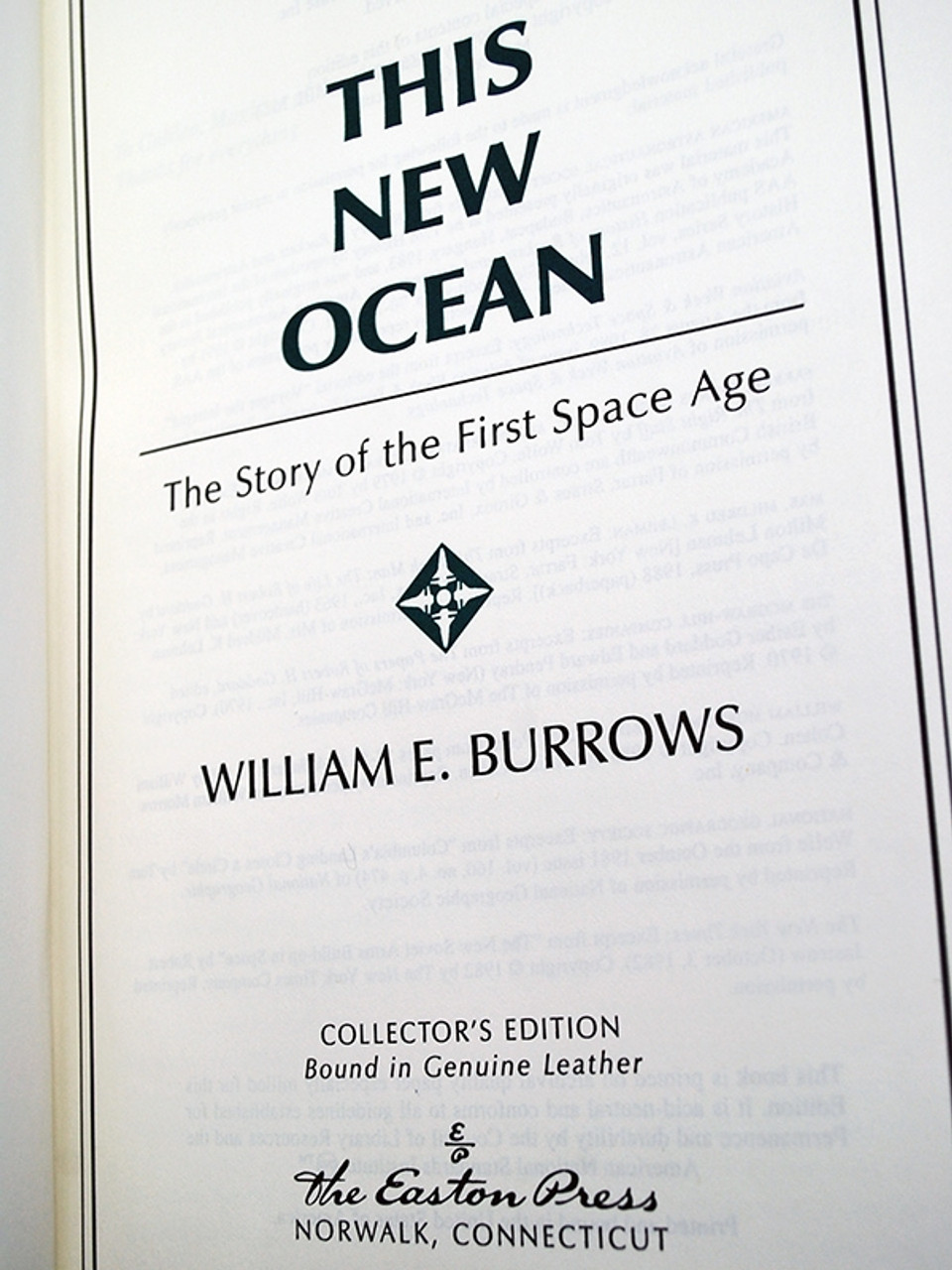 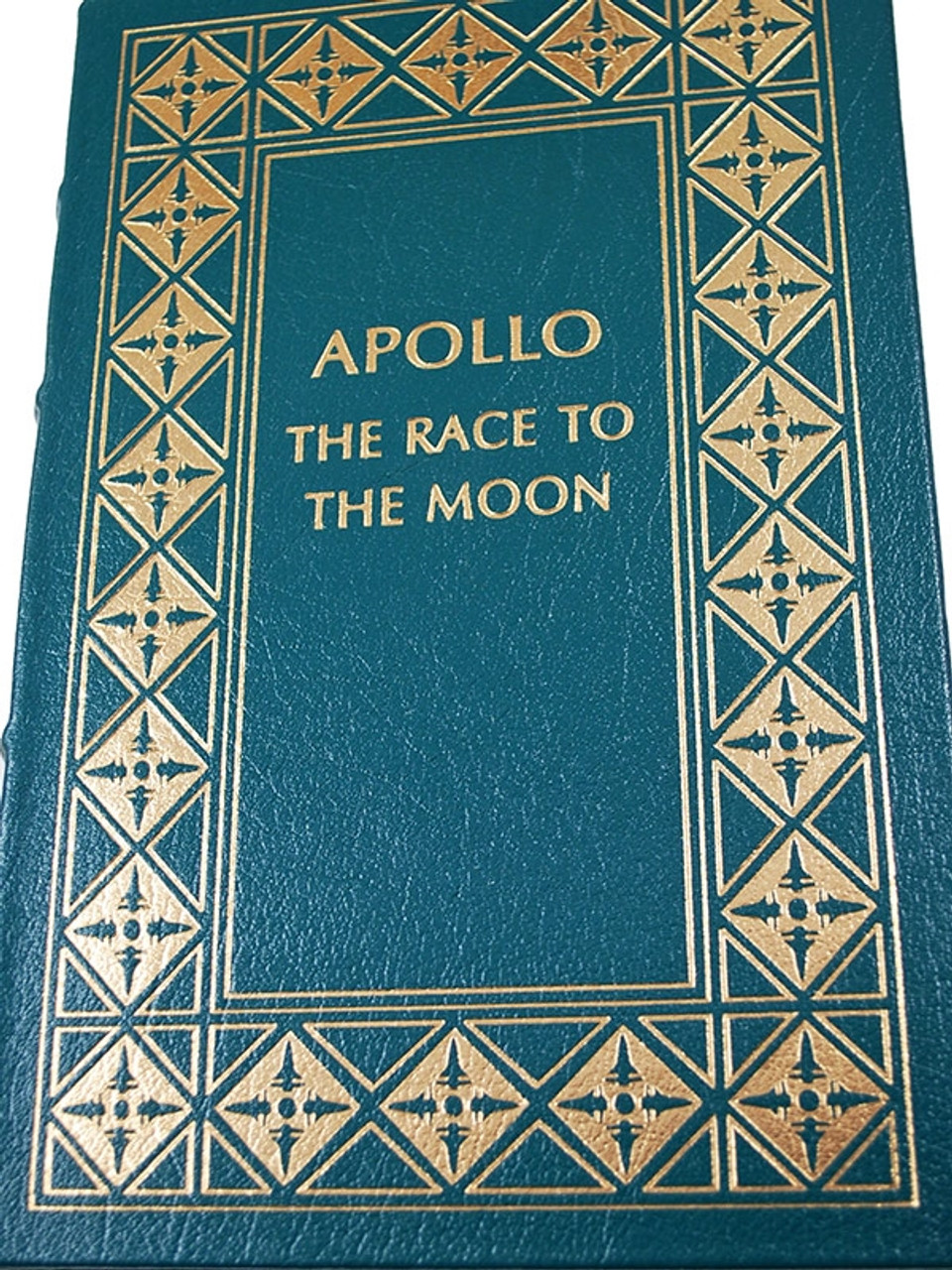 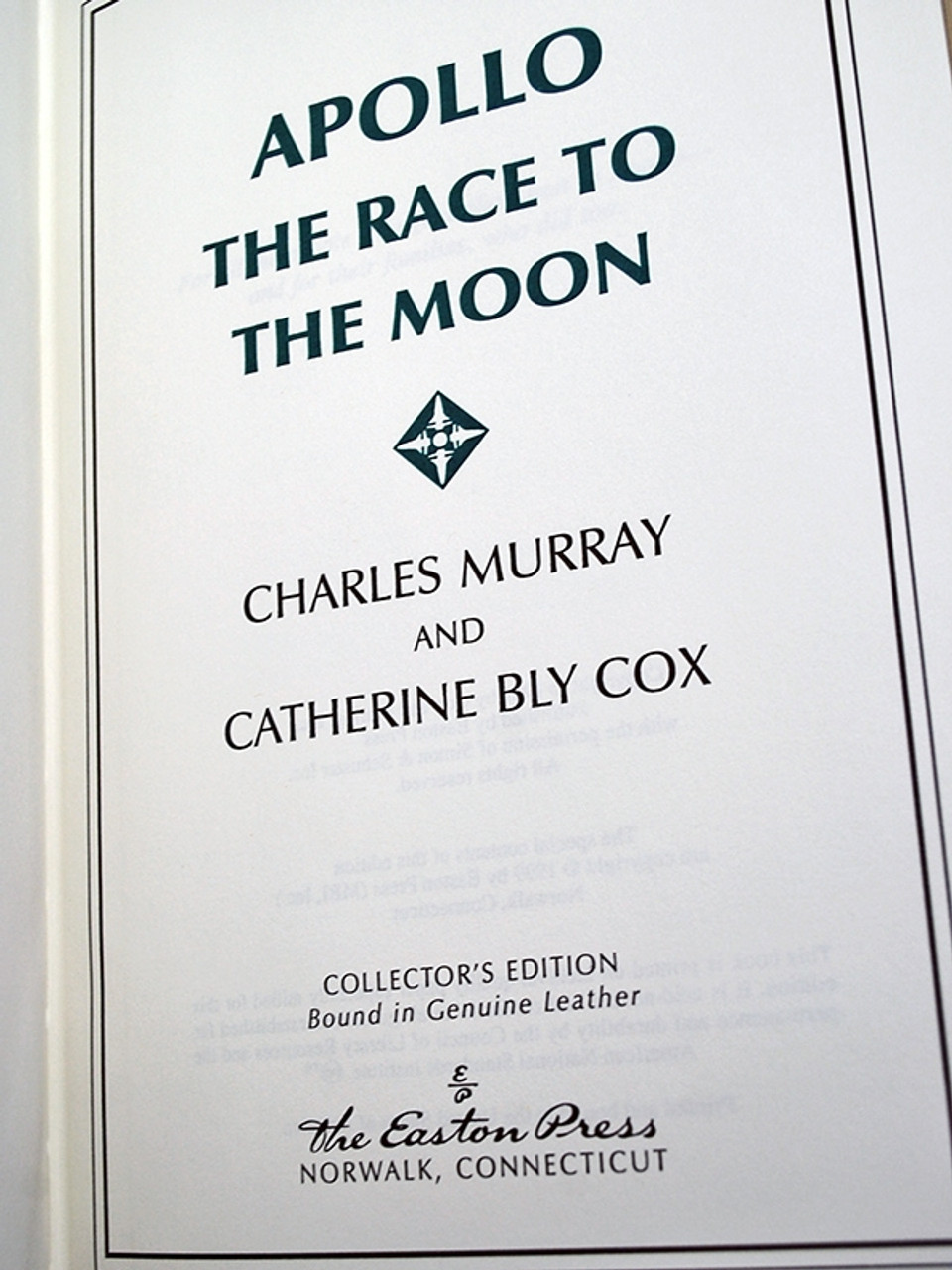 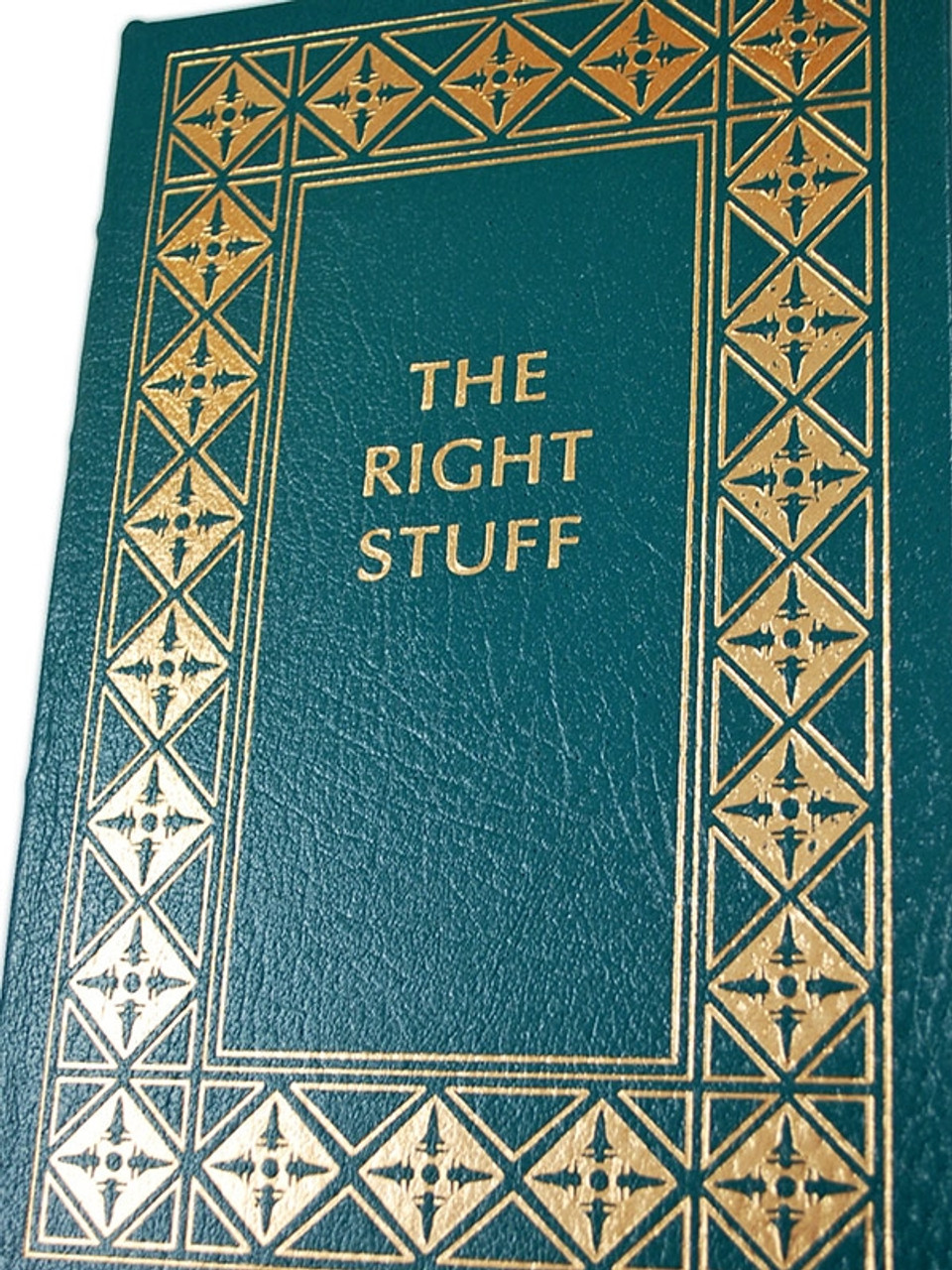 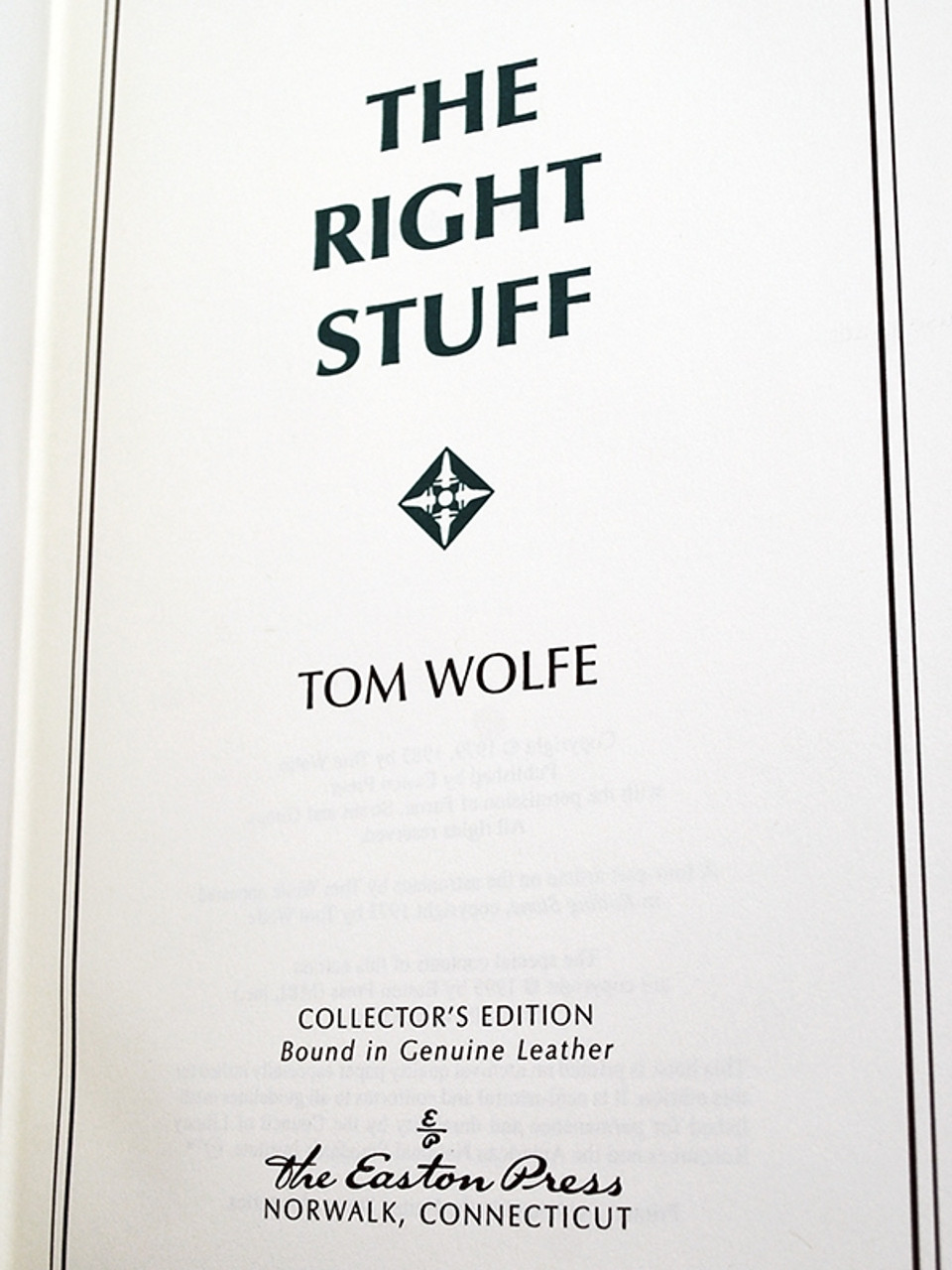 The Race To Space, Complete In Five Leather Bound Volumes by Easton Press

1. "Apollo: The Race to the Moon" by Charles Murray & Catherine Bly Cox

3. This New Ocean: The Story of the First Space Age, by William E Burrows

4. The Right Stuff, by Tom Wolff

5. A Man on the Moon: The Voyage of the Apollo Astronauts, by Andrew Chaikin


Apollo: The Race to the Moon, by Charles Murray & Catherine Bly Cox

The story of America's Apollo space projects of the 1960s, told from the perspective of the scientists, engineers and people at Mission Control who made the moon landing possible. This history of science is related in human terms, and aims to capture the drama of a critical era in world history. It begins with the group of engineers commissioned to build a space programme from scratch, and the experiments at Cape Canaveral which turned theory into practice. There are portraits of Kennedy, Lyndon Johnson and many of the astronauts, and accounts of the success of Apollo 11 and disastrous failure of Apollo 13. Charles Murray is the author of the bestselling "Losing Ground" and "In Pursuit of Happiness and Good Government".

"First on the moon. The sound of the words themselves cannot convey their full meaning, the weight of wonder that they bear. The time, money, lives, will, knowledge - the total effort that went into putting man on the moon is beyond measurement. First on the Moon: A Voyage with Neil Armstrong, Michael Collins, and Edwin E. Aldrin, Jr. is the exclusive story of Apollo 11 and the always thrilling and historic personal experiences of the three astronauts who put man on the moon.

It is a voyage in every sense of the word - through time, from President Kennedy's fateful pronouncement on May 25, 1961, that the United States would put man on the moon before the decade was out, and through space, with Mercury, Gemini, and Apollo....Life senior editor and Life staff writer Dora Jane Hamblin have spent many months with - indeed, living with - the astronauts and their families. Not only is the flight excitingly and thoroughly documented, with the astronauts' own thoughts and words woven through the recorded transcript with Houston, but the atmosphere in the astronauts' homes during the flight is faithfully recorded...."

This New Ocean: The Story of the First Space Age, by William E Burrows

This New Ocean is based on 175 interviews with Russian and American scientists and engineers; on archival documents, including formerly top-secret National Intelligence Estimates and spy satellite pictures; and on nearly three decades of reporting. The impressive result is this fascinating story--the first comprehensive account--of the space age. Here are the strategists and war planners; engineers and scientists; politicians and industrialists; astronauts and cosmonauts; science fiction writers and journalists; and plain, ordinary, unabashed dreamers who wanted to transcend gravity's shackles for the ultimate ride. The story is written from the perspective of a witness who was present at the beginning and who has seen the conclusion of the first space age and the start of the second.


The Right Stuff, by Tom Wolff

Men first flew into space in 1961, but until The Right Stuff was first published in 1979 few people had a sense of the most engrossing side of that adventure: namely, the perceptions and goals of the astronauts themselves, aloft and during certain remarkable odysseys on earth.

It is this, the inner world of the early astronauts, John Glenn, Alan Shepard, Gus Grissom, and their confreres, that Tom Wolfe describes with his extraordinary powers of empathy. He shows us the bidden olympus to which all ambitious combat and test pilots aspired, the top of the pyramid of the right stuff. And we learn the nature of the ineffable pilot's grace without which all else meant nothing.

We see the men whose achievements dominated the flying fraternity in the late 1950's as the space age began, men like Chuck Yeager and Joe Walker, pilots of the first rocket planes, most notably the X-1 and the X-15. The selection of the Mercury astronauts in 1959 shook up the fraternity as thoroughly as had Yeager's breaking of the sound barrier twelve years before. Public excitement and concern over the space race with the Soviets immediately elevated the seven astronauts to the uneasy eminence of heroes, long before their first flight.

We see the seven men, in the very moment of their idolization by the outside world, struggling to gain the respect of their peers within the flying fraternity, even to the point of altering NASA's original conception of the astronaut's role—in keeping with the unspoken prerequisites of the right stuff.

"Breathtaking . . . epic . . . There are images and ideas in The Right Stuff that glisten like a rocket screaming to the heavens." —Los Angeles Times

"It's magic . . . the best book I have read in the last ten years." —Chicago Tribune


A Man on the Moon: The Voyage of the Apollo Astronauts, by Andrew Chaikin

On the night of July 20, 1969, our world changed forever when two Americans, Neil Armstrong and Buzz Aldrin, walked on the moon. Now the greatest event of the twentieth century is magnificently retold through the eyes and ears of the people who were there. Based on the interviews with twenty-three moon voyagers, as well as those who struggled to get the program moving, journalist Andrew Chaikin conveys every aspect of the missions with breathtaking immediacy: from the rush of liftoff, to the heart-stopping lunar touchdown, to the final hurdle of reentry.

For the discerning baseball aficionado, there is no greater treasure than this exquisite leather-bound set from the Easton Press Baseball Hall of Fame Library. Celebrating America's national pastime,...

The Day of Infamy began as a quiet morning on the American naval base at Pearl Harbor. But as Japans deadly torpedoes suddenly rained down on the Pacific fleet, soldiers, generals, and civilians...