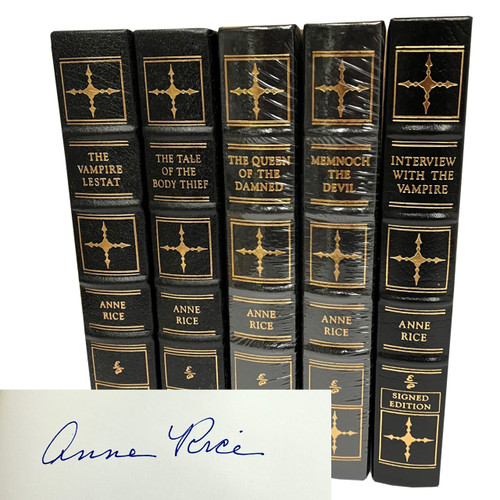 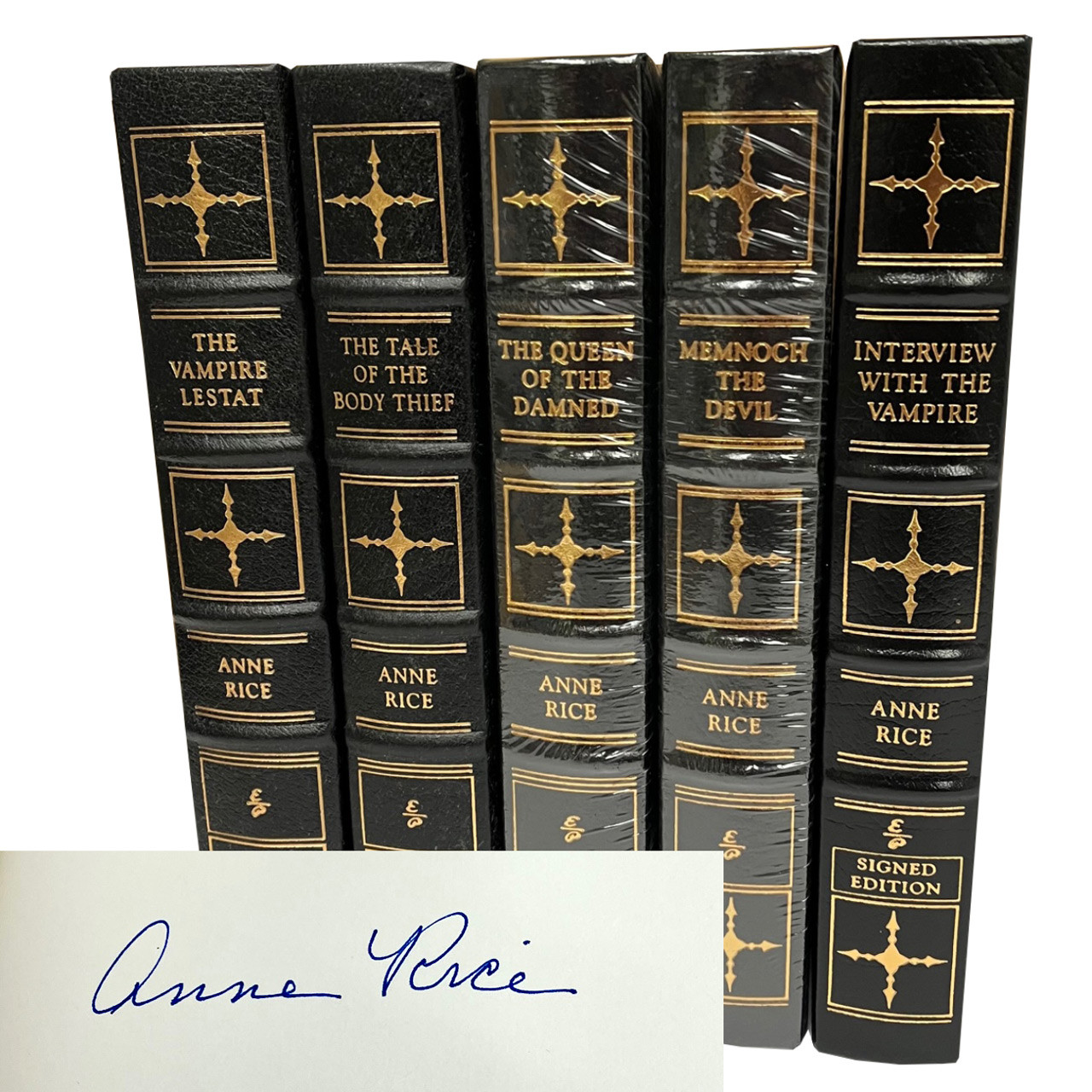 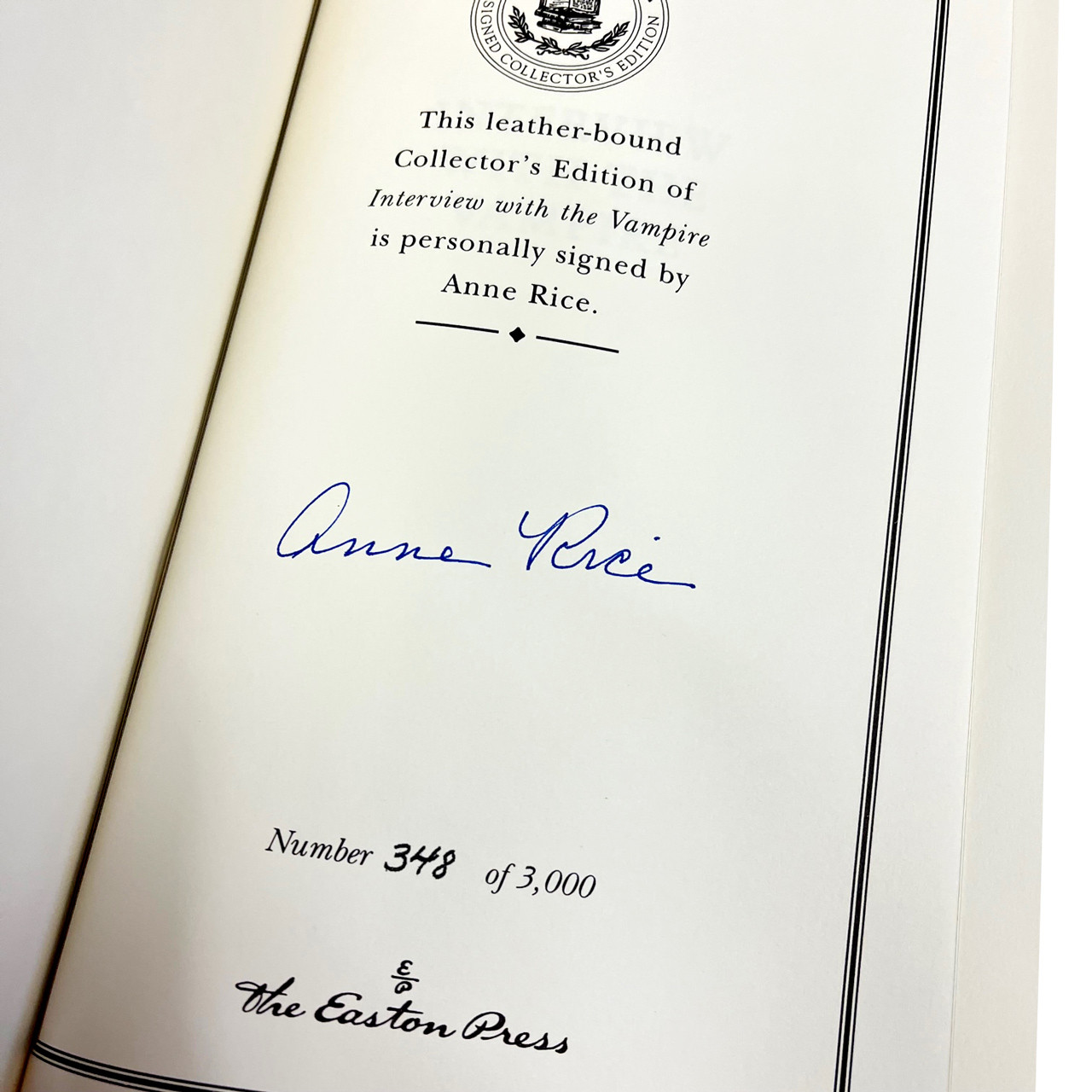 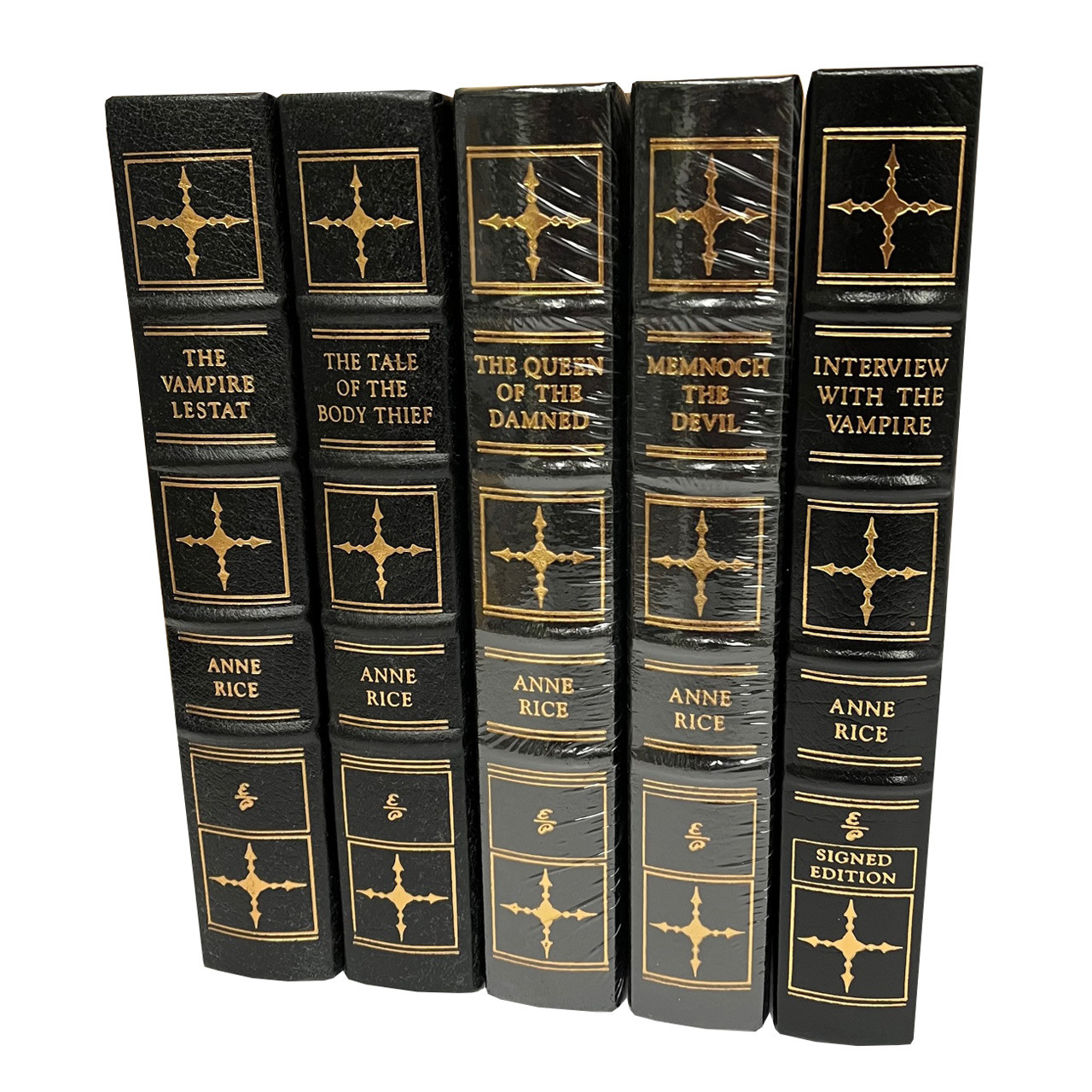 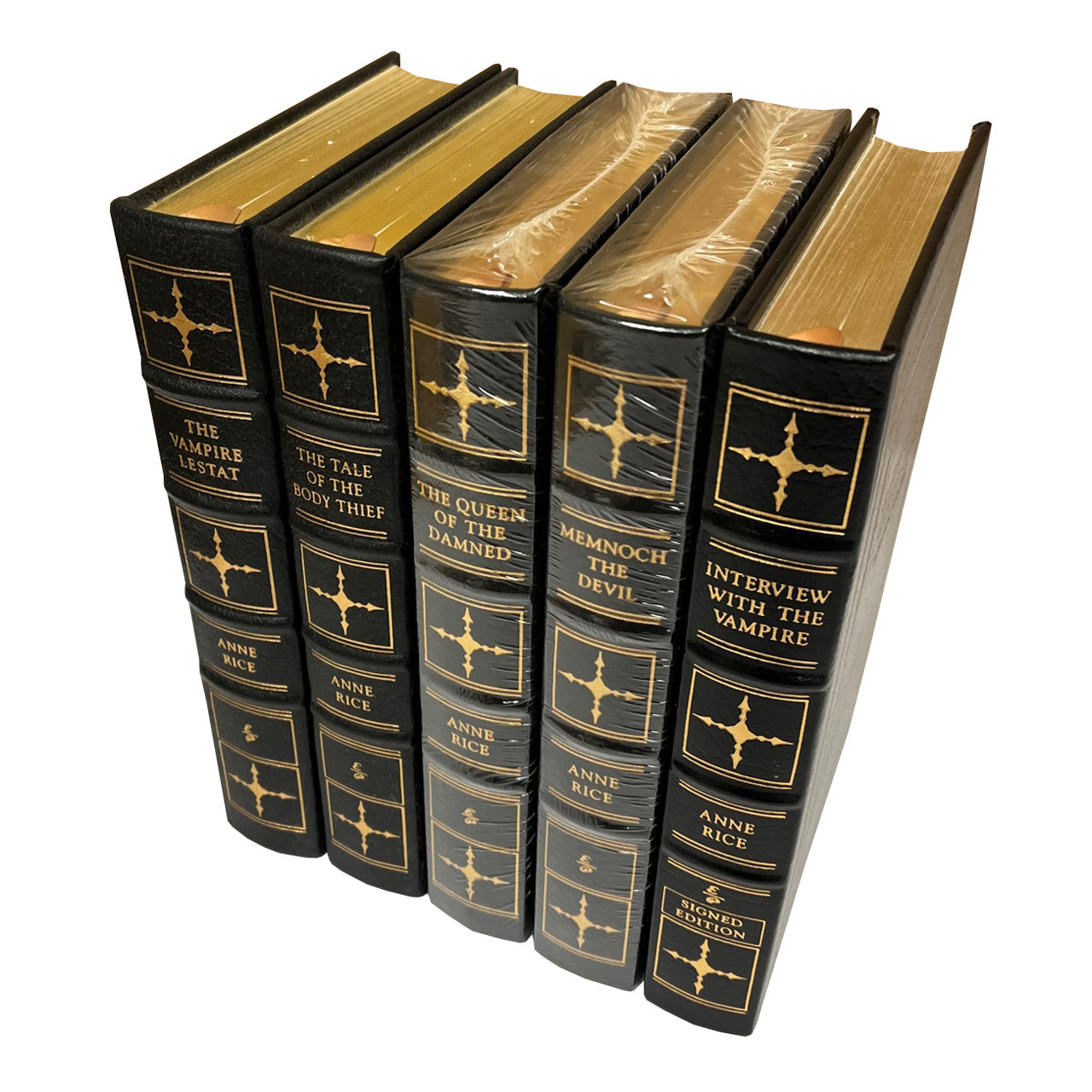 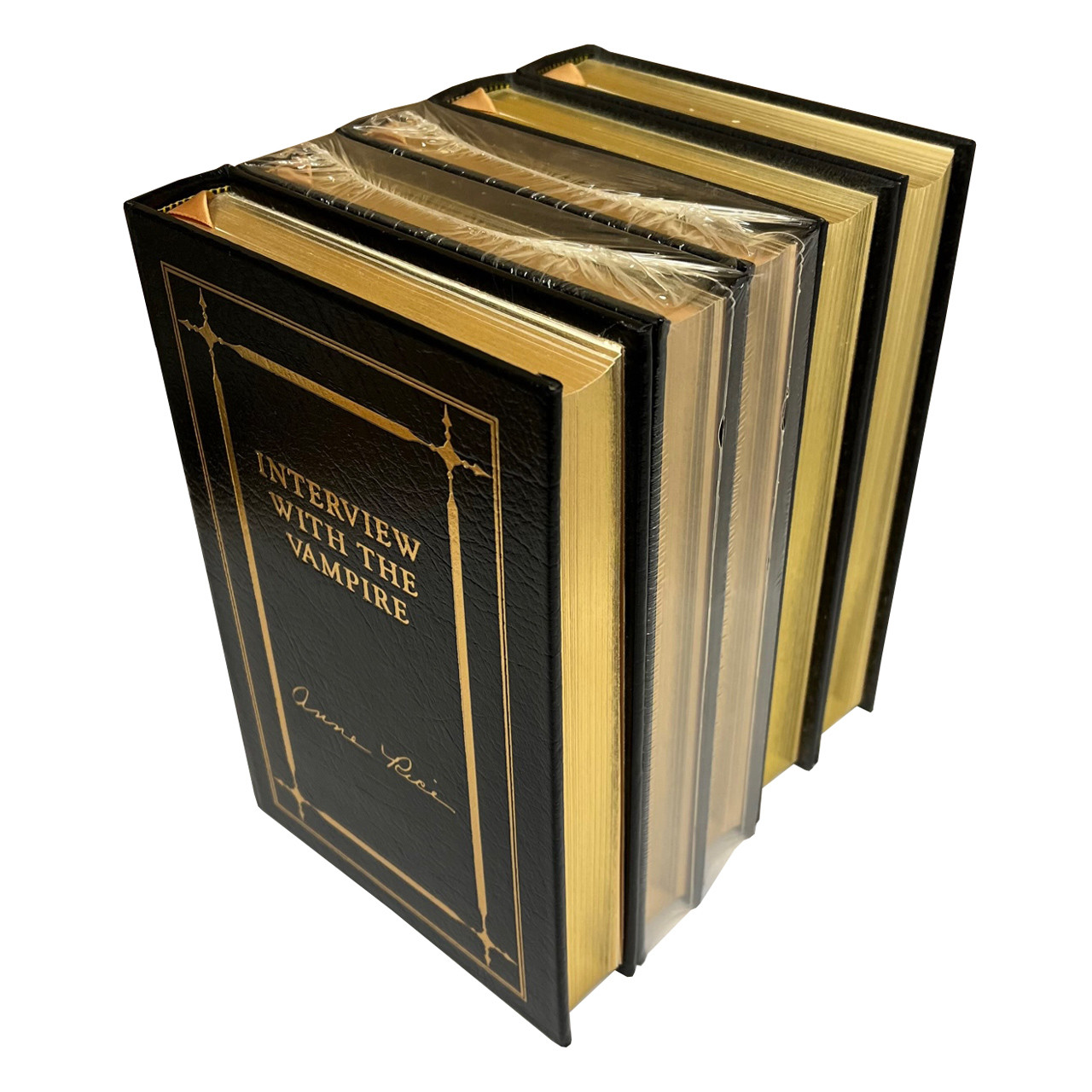 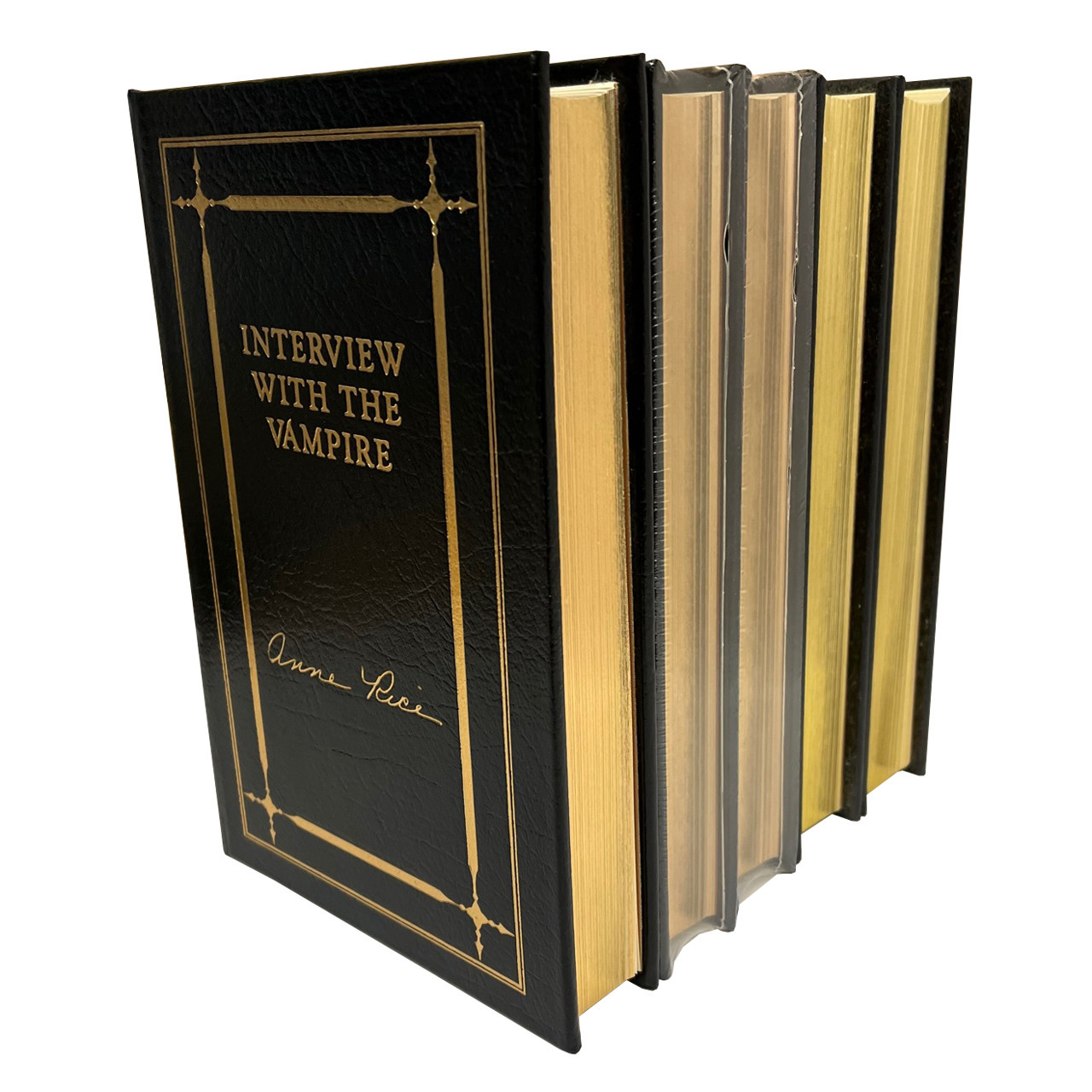 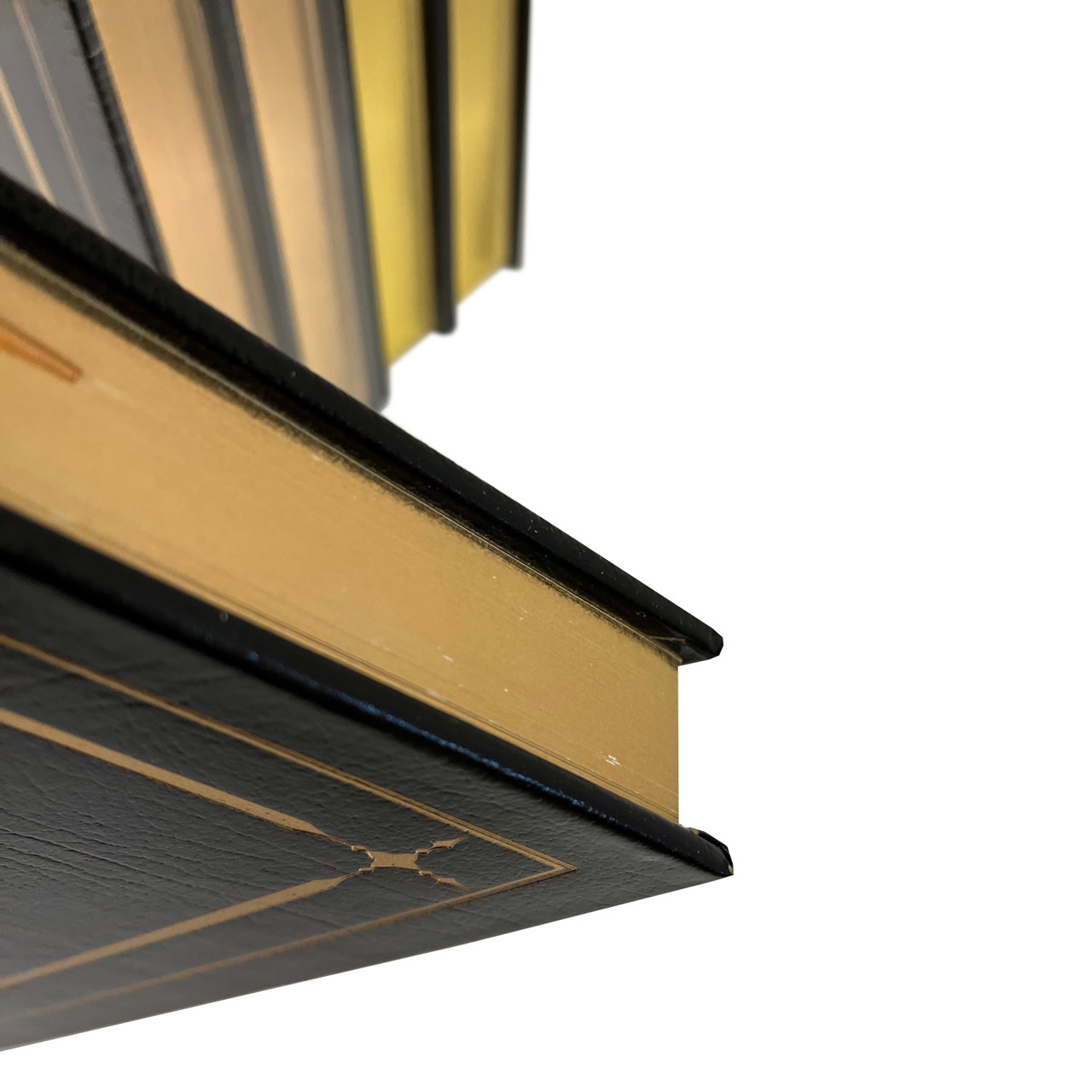 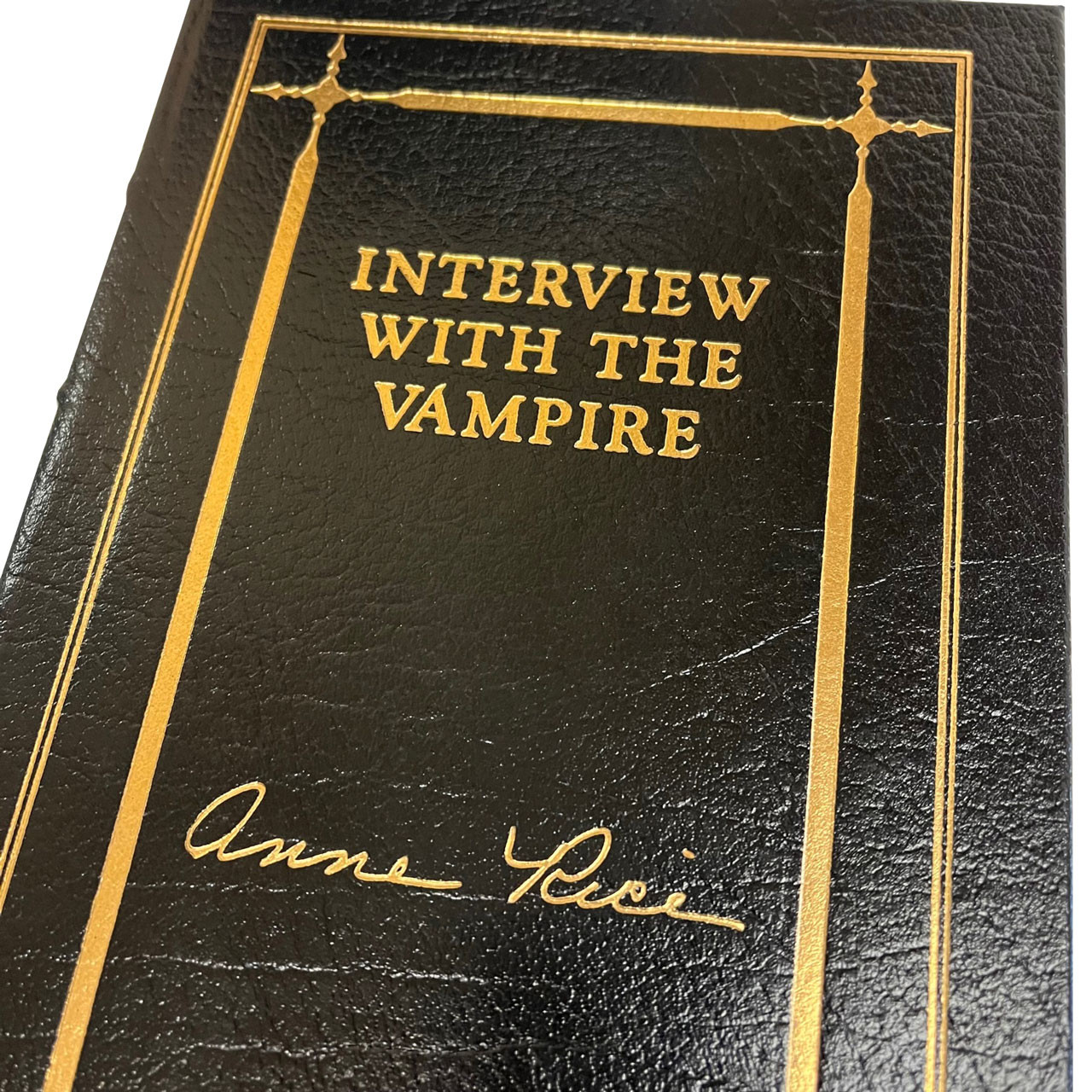 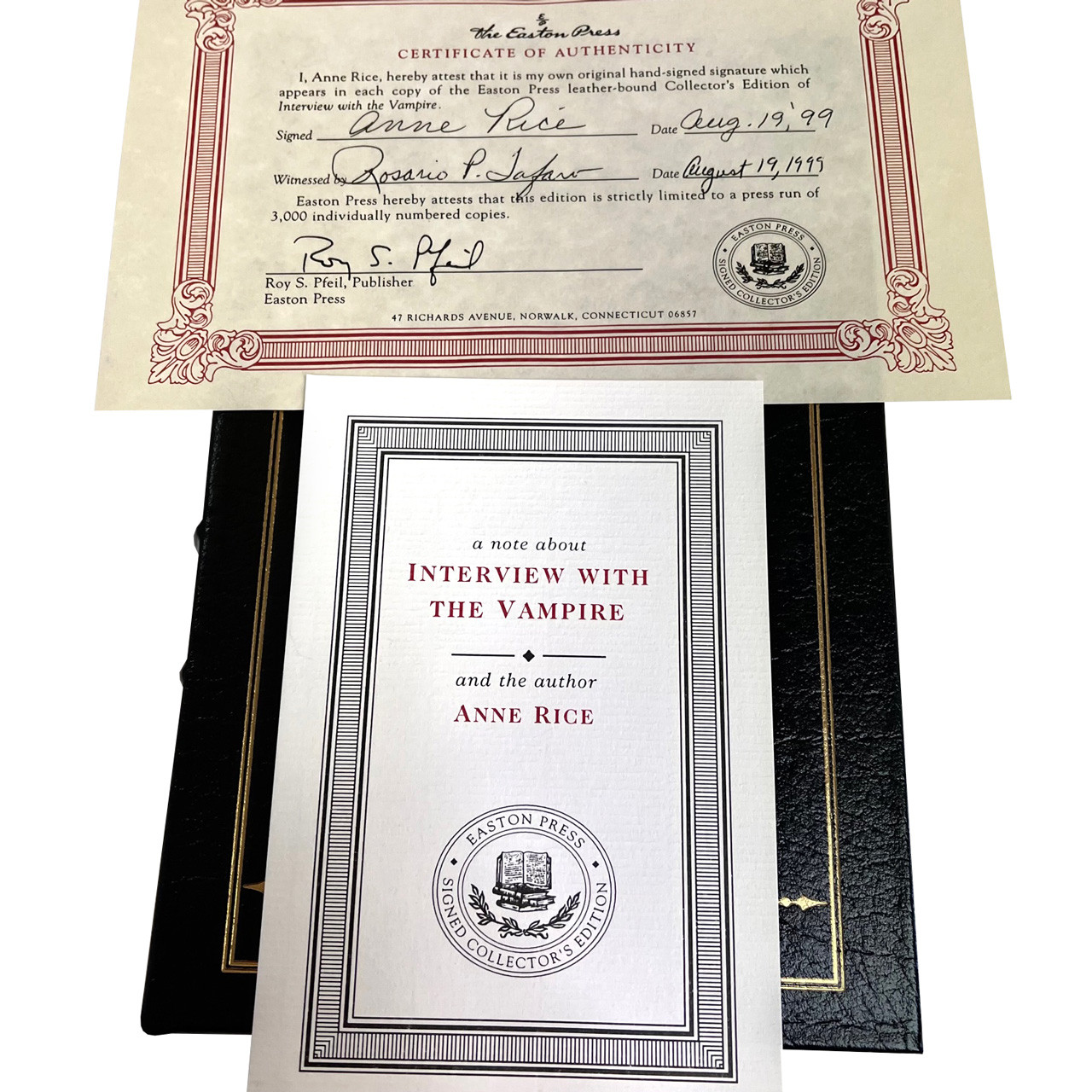 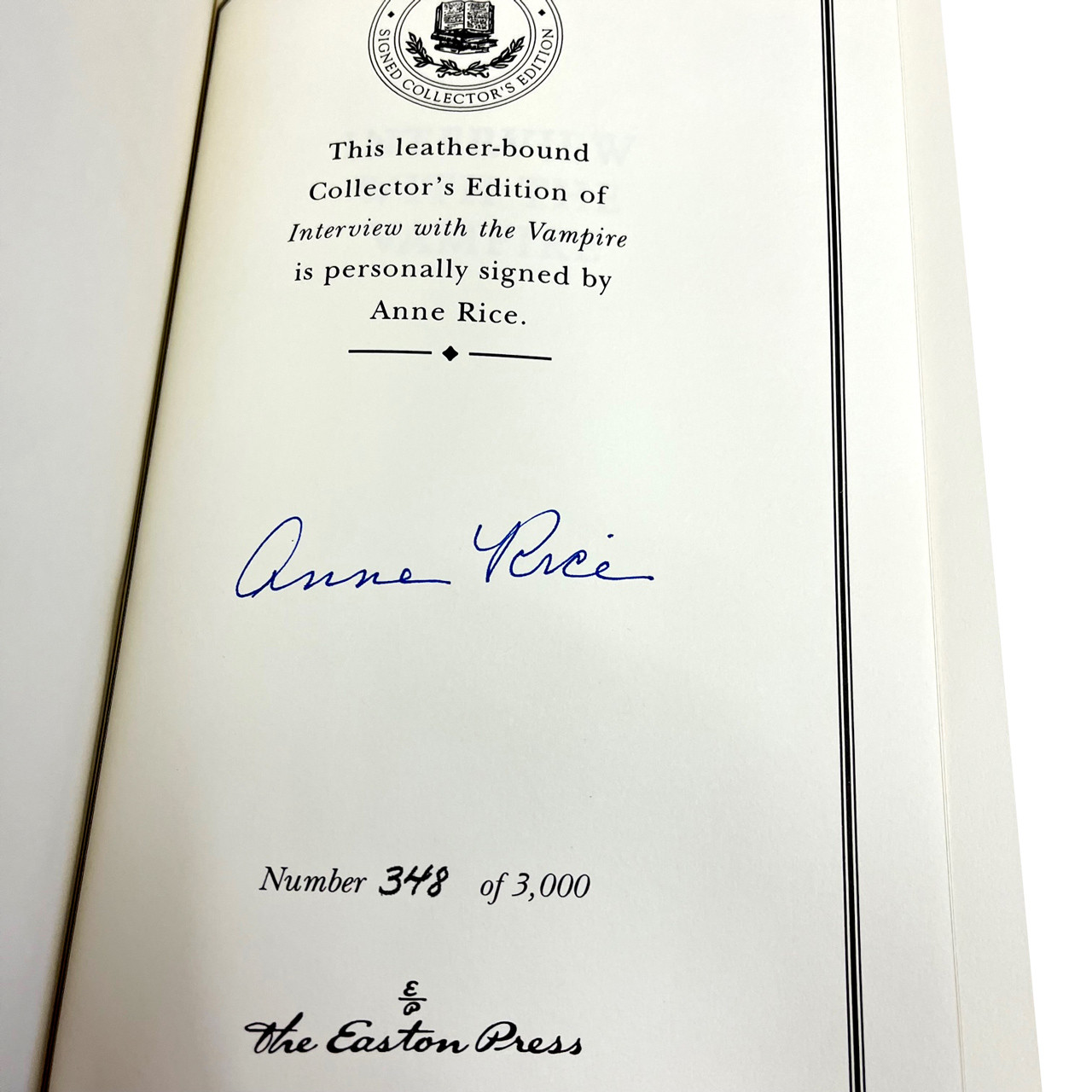 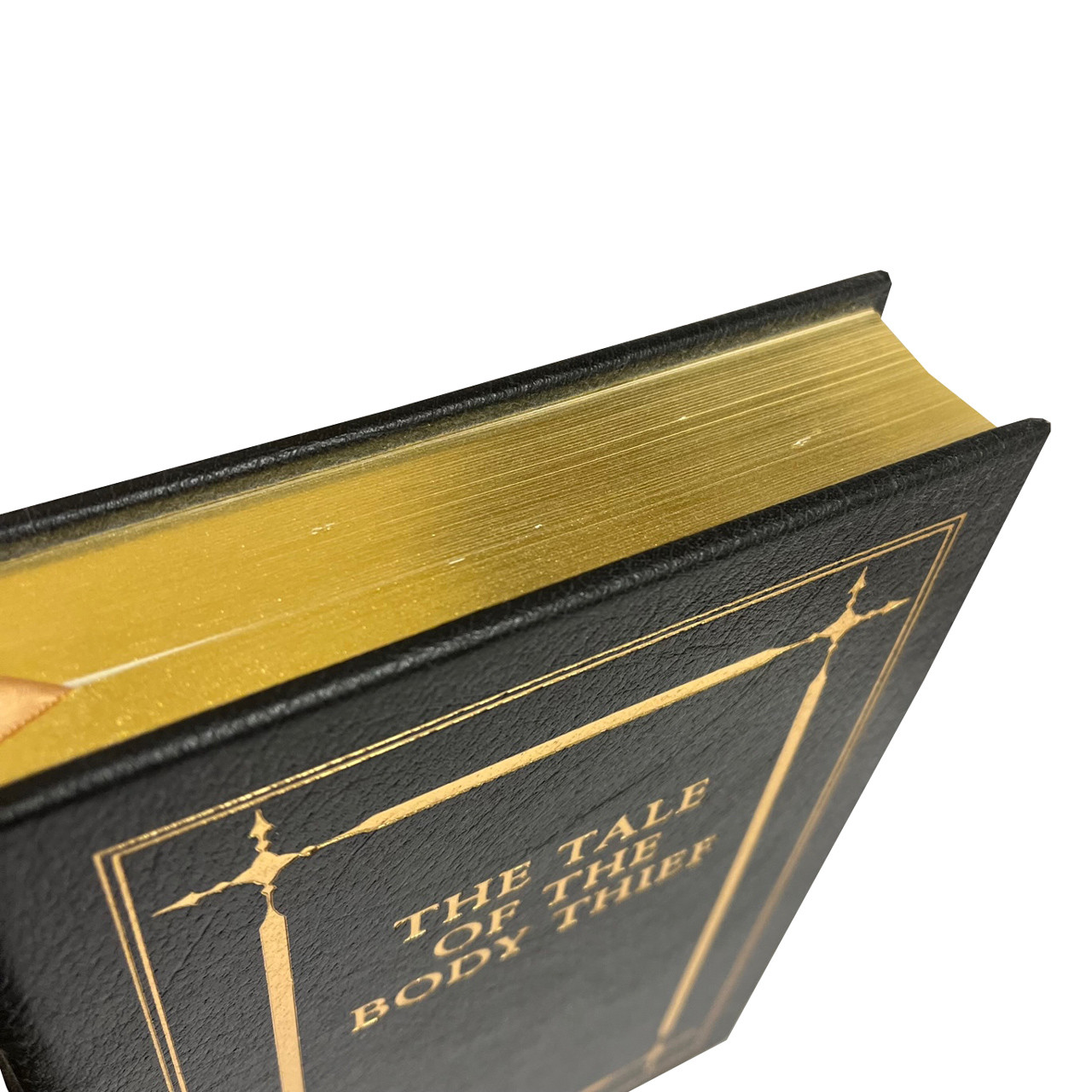 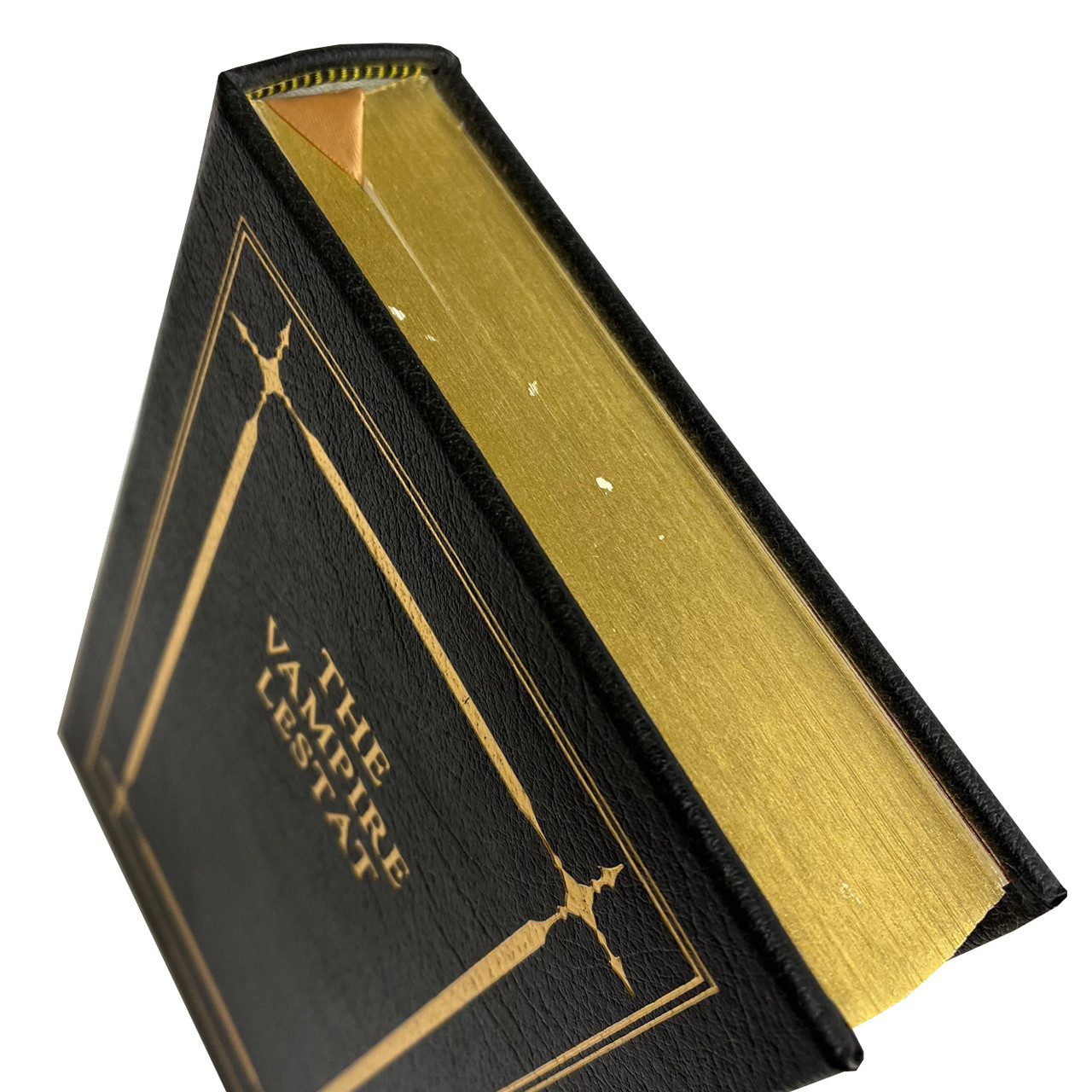 
"Interview With The Vampire" is personally signed by Anne Rice directly onto the special limitation page.

The Vampire Chronicles is a series of gothic horror novels and a media franchise, created by American writer Anne Rice, that revolves around the fictional character Lestat de Lioncourt, a French nobleman turned into a vampire in the 18th century.

The first novel in the series, Interview with the Vampire (1976), was made into a 1994 film starring Tom Cruise, Brad Pitt, Antonio Banderas, Christian Slater and Kirsten Dunst. The Queen of the Damned (1988) was adapted into a 2002 film of the same name, starring Stuart Townsend and Aaliyah and using some material from 1985's The Vampire Lestat. In May 2020, AMC acquired the rights to both The Vampire Chronicles and Lives of the Mayfair Witches for developing film and television projects. A seven-episode television adaptation, Interview with the Vampire, premiered on AMC on October 2, 2022, starring Jacob Anderson and Sam Reid.

All volumes contain all the classic Easton Press trimmings:

One of the contemporary world's most popular and influential writers, Anne Rice uses her extraordinary literary skills to transform genre fiction - horror stories, erotica, and historical romance - into modern classics that illuminate the big questions of mortality and suffering for our time. Born in 1941 in New Orleans, the future author was christened Howard Allen O'Brien after her father but renamed herself Anne on her first day of Catholic school. In 1961, she married her high school sweetheart Stan Rice and moved to San Francisco. After the tragic death of her daughter in 1973, Rice transformed a short story, "Interview With The Vampire", into her first novel, which was published in 1976. She has published more than twenty novels (including titles under the pen names A.N. Roquelaure and Anne Rampling), almost all of which have been bestsellers. Her credits include The Vampire Lestat, Exit to Eden, The Mummy and Violin.

In Anne Rice's classic debut novel, Interview With The Vampire, the 200 hundred year-old Louis Pointe du Lac tells how he became a vampire. After a devastating personal loss, Louis sought solace first in alcohol, then in the charismatic vampire Lestat's offer to join the "undead". But the "dark gift" of immortality does not free Louis from the grief and loneliness of living. While he has the power to satisfy his appetites, he cannot escape them, nor can he deny responsibility for his actions. A profound philosophical thriller, Interview With The Vampire transformed the Vampire of Bram Stoker's novel and Hollywood's movies into a myth for our age.