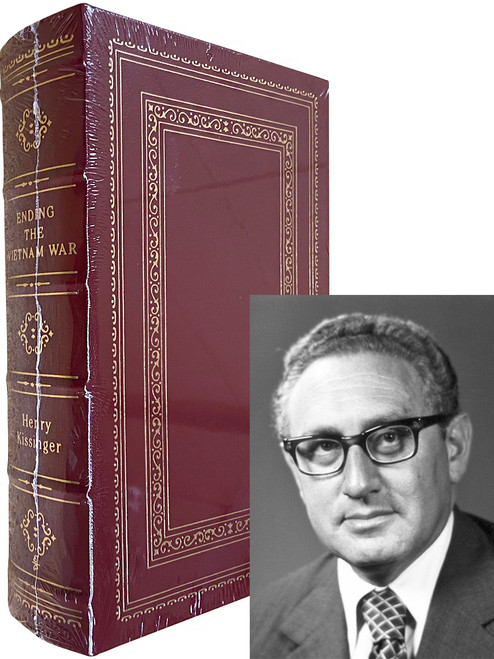 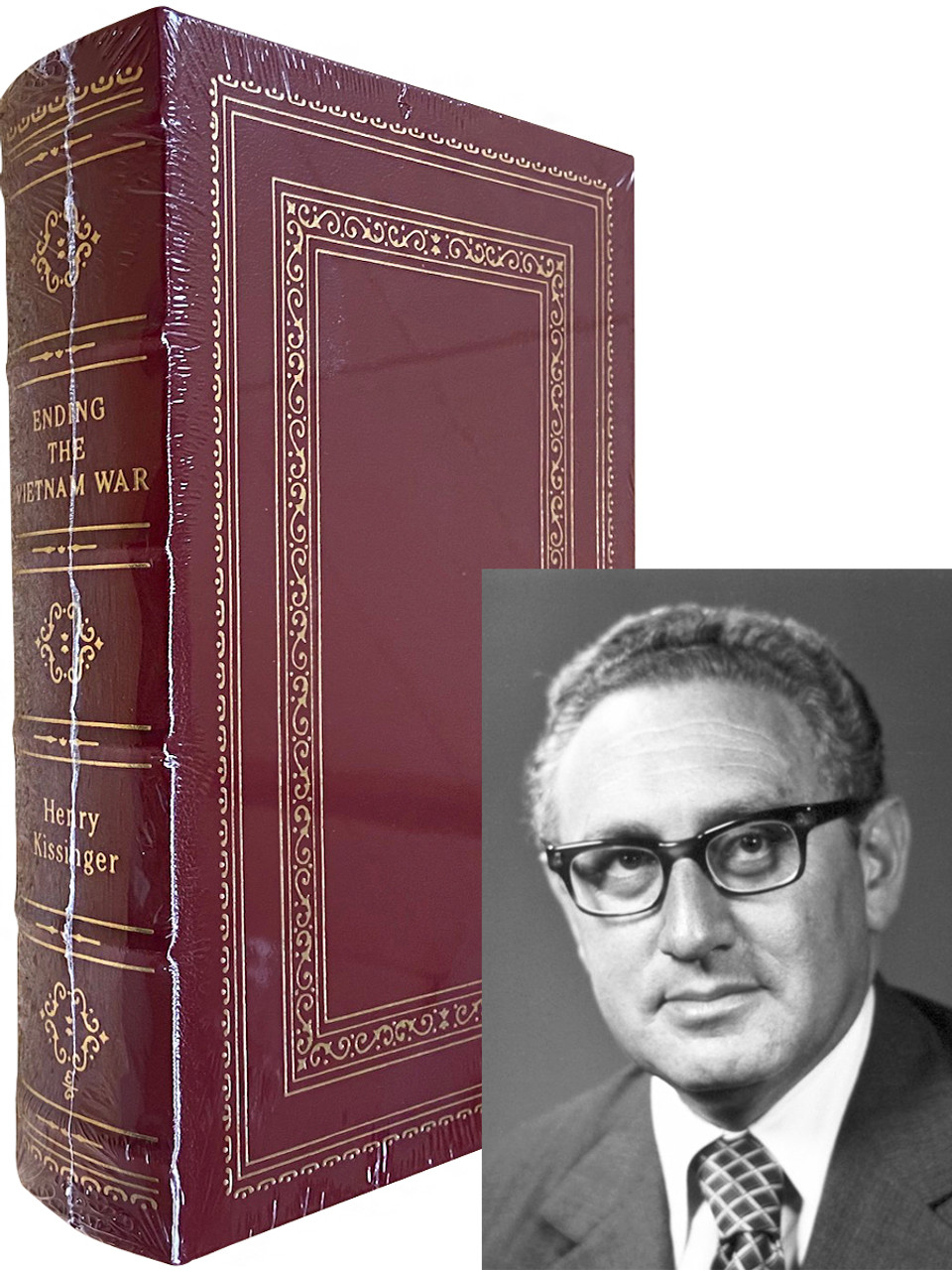 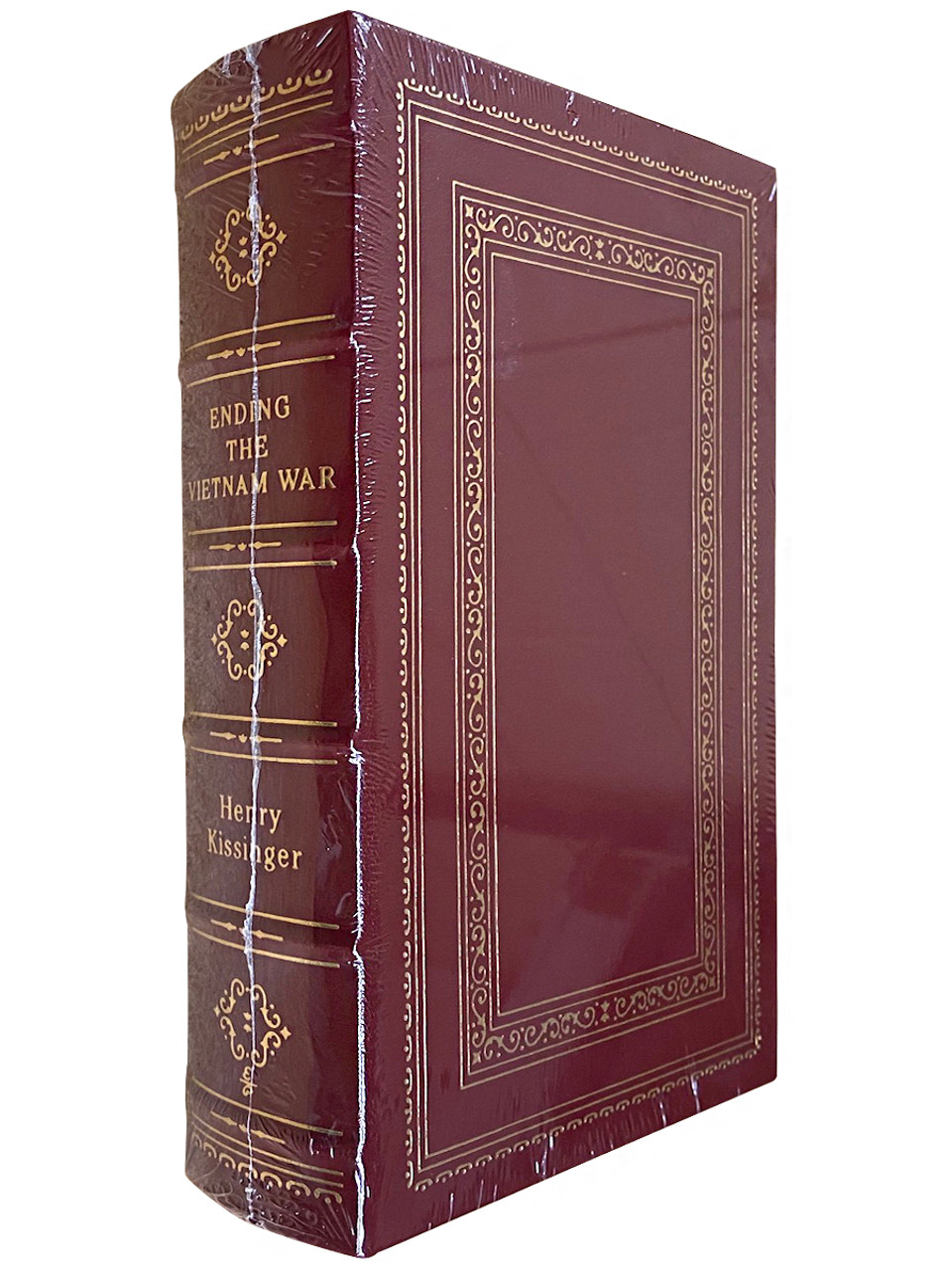 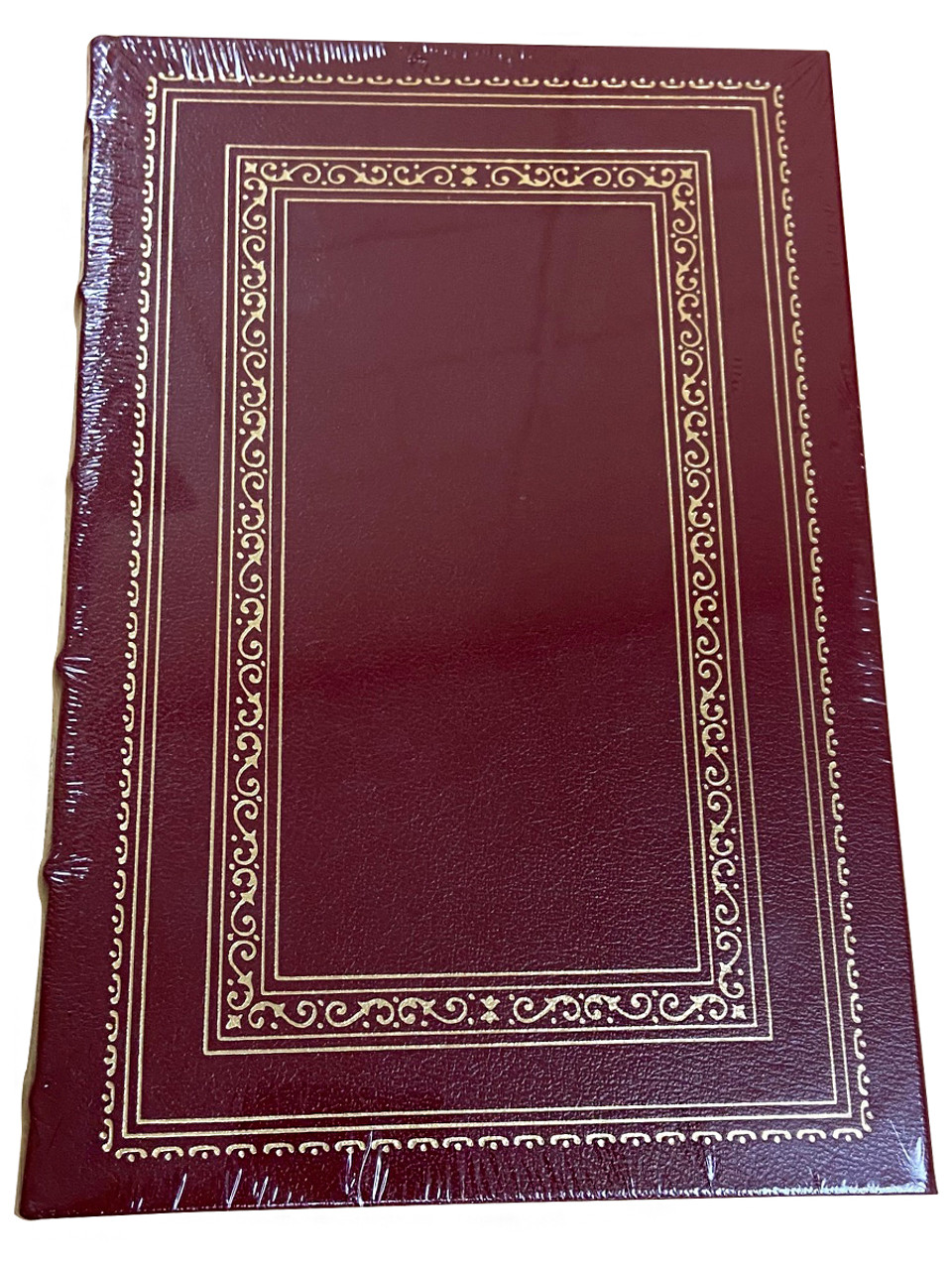 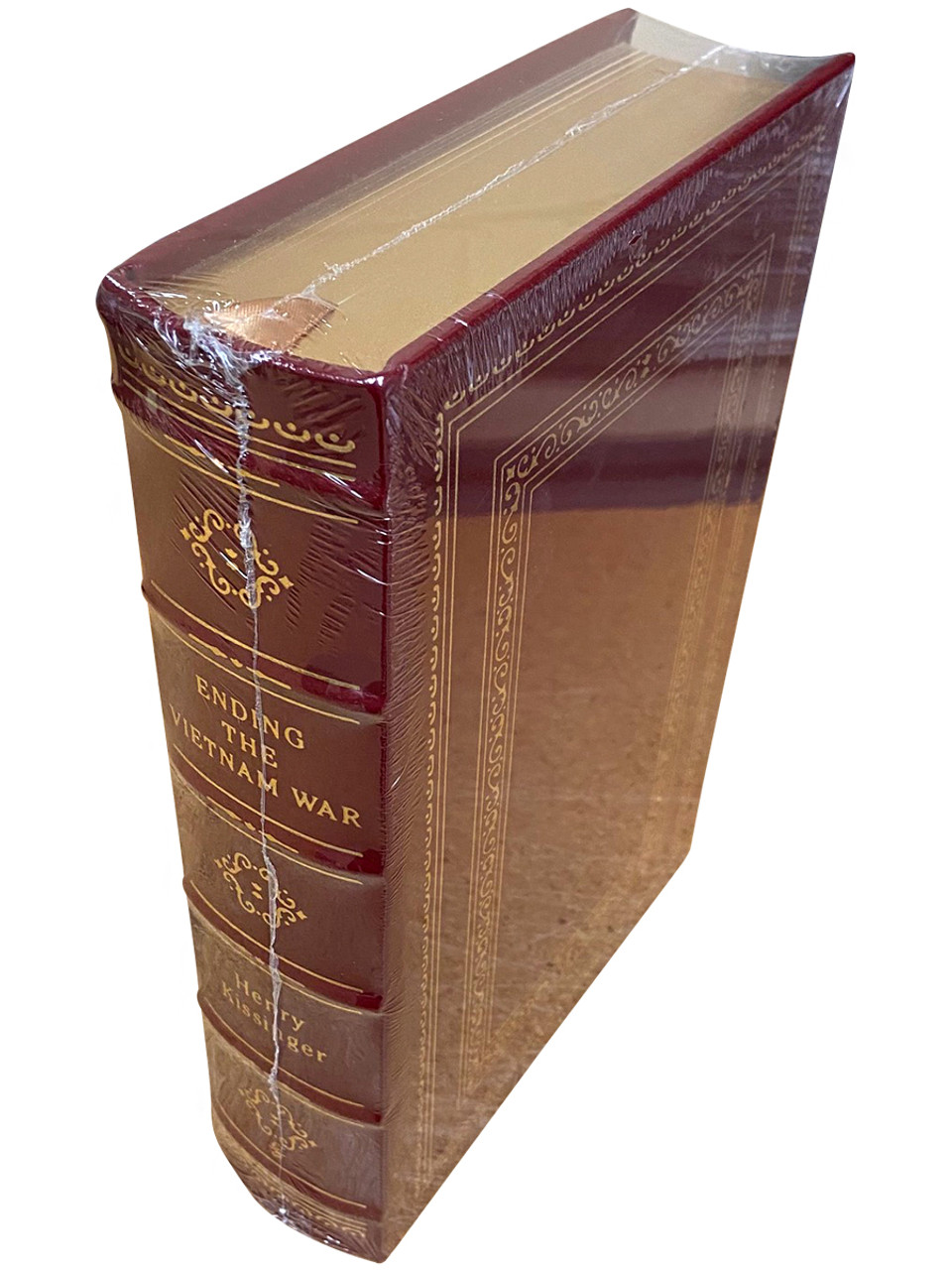 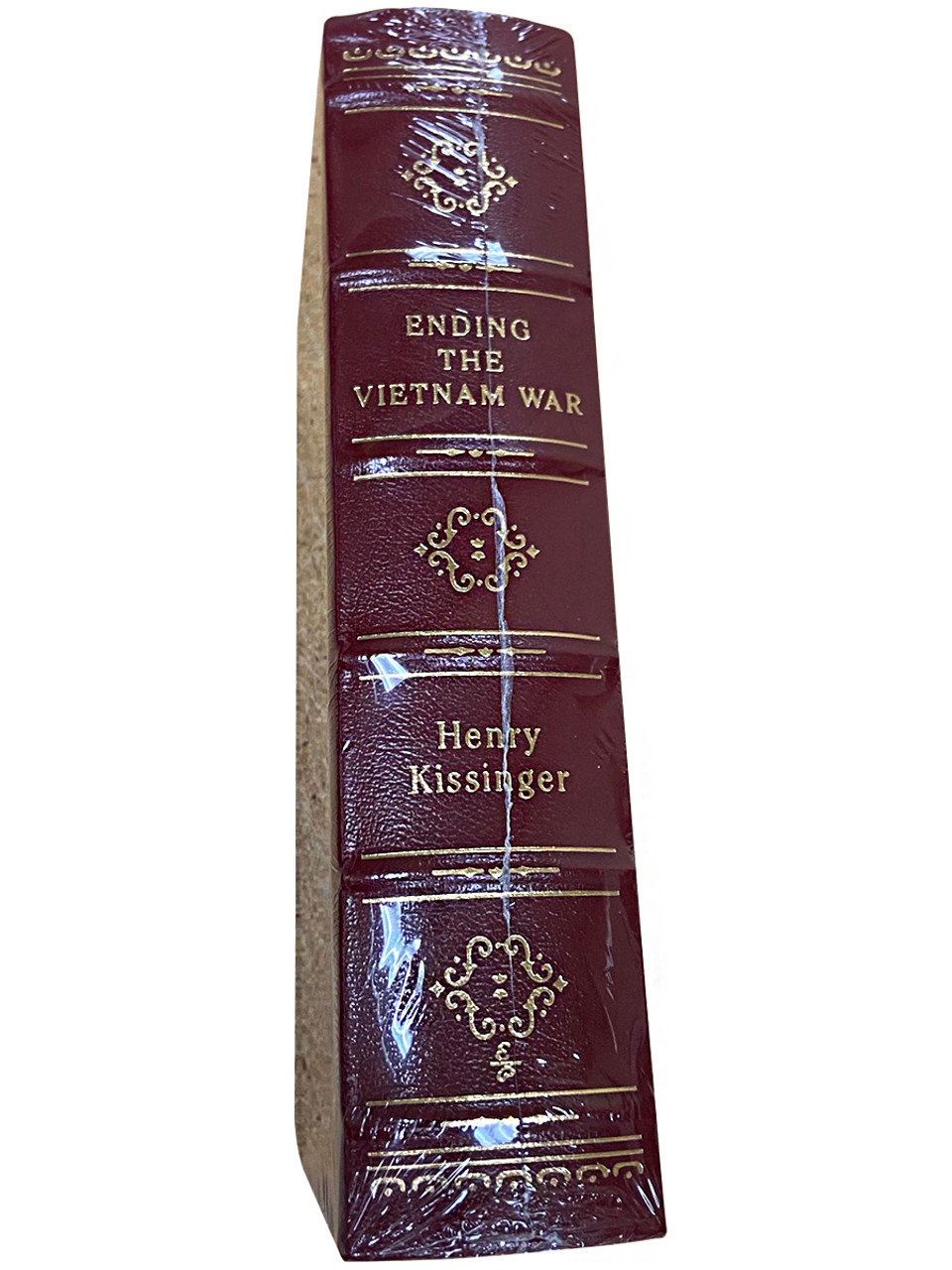 Easton Press. Norwalk, CT. 2003. Henry Kissinger "Ending The Vietnam War" Signed Limited Edition.  Kissinger writes with firm, precise knowledge, supported by meticulous documentation that includes his own memoranda to and replies from President Nixon. He tells about the tragedy of Cambodia, the collateral negotiations with the Soviet Union and the People's Republic of China, the disagreements within the Nixon and Ford administrations, the details of all negotiations in which he was involved, the domestic unrest and protest in the States, and the day-to-day military to diplomatic realities of the war as it reached the White House. Signed by Author. Brand new, mint, and flawless. Still sealed in the original shrink-wrap from Easton Press.

As a relatively unknown Harvard professor, Kissinger played an interesting-though entirely cloaked and somewhat serendipitous-role in one of Lyndon Johnson's muddled attempts to end the Vietnam War through diplomacy. Later on, he sat at the nexus of American power during his days as Nixon's foreign policy adviser, national security adviser and secretary of state. In addition to being a major player in the events he narrates here, Kissinger is also a scholar of the first rank and a gifted prose stylist. Thus readers interested in the Vietnam period but unfamiliar with Kissinger's previous books will find this new volume worthwhile. All others will find it redundant, nearly entirely derivative from chapters previously published in his three volumes of memoirs and his study Diplomacy. "I have rearranged and occasionally rewritten the material to provide a consecutive narrative," Kissinger writes in his foreword, and "reshaped the narrative from the anecdotal tone of memoirs to a more general account of the period...."

Like the previous works from which it is mined, this new book provides a cogently written insider's take on the process of shutting down America's involvement in the long Southeast Asia conflict. The sections documenting Kissinger's day-to-day, face-to-face skirmishes with the North Vietnamese over a negotiating table in Paris are particularly engaging. Overall, Kissinger's account of America's venture in Vietnam and his role in that shipwreck is factually accurate, eminently informed and masterfully crafted. But it is also an account that many of us have already read.

VERY FINE GUARANTEED. As New (Sealed). This volume is mint and sealed in the original shrink-wrap. Unread book with no bumped corners. Sharp corners. No marks, writings or stamps. No scratches and/or blemishes to the gilded page edges.