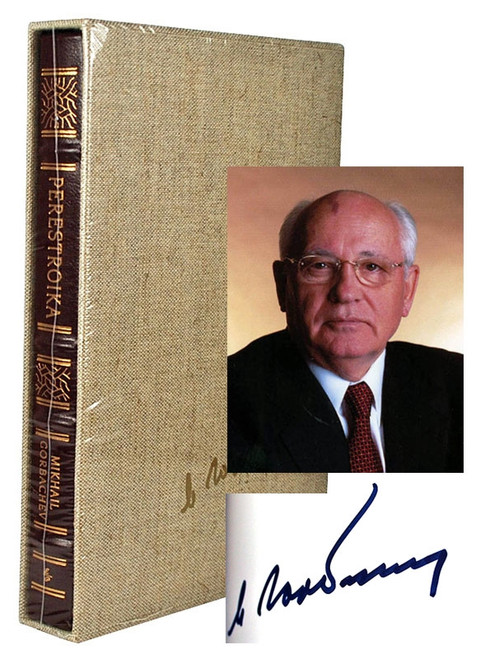 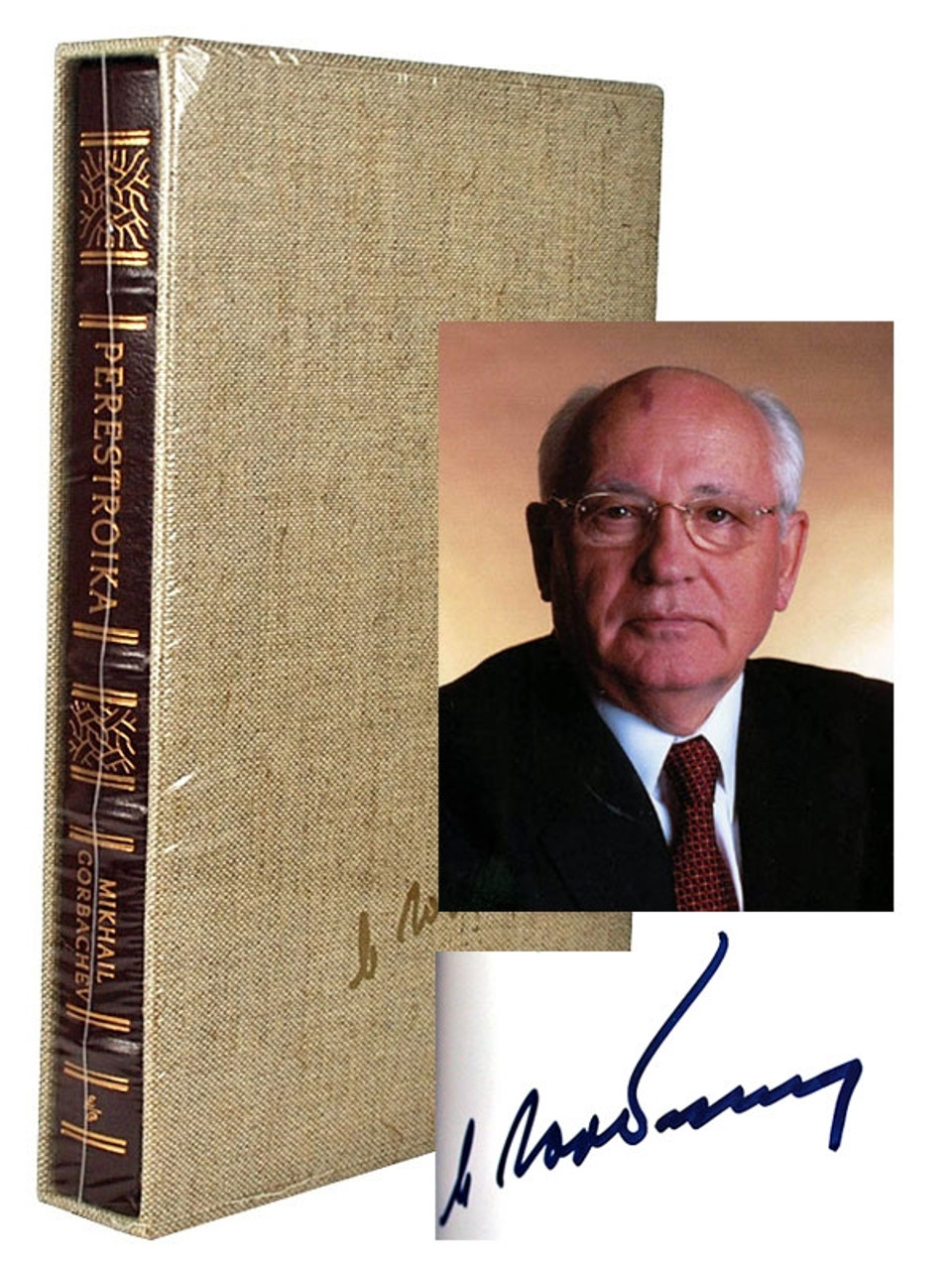 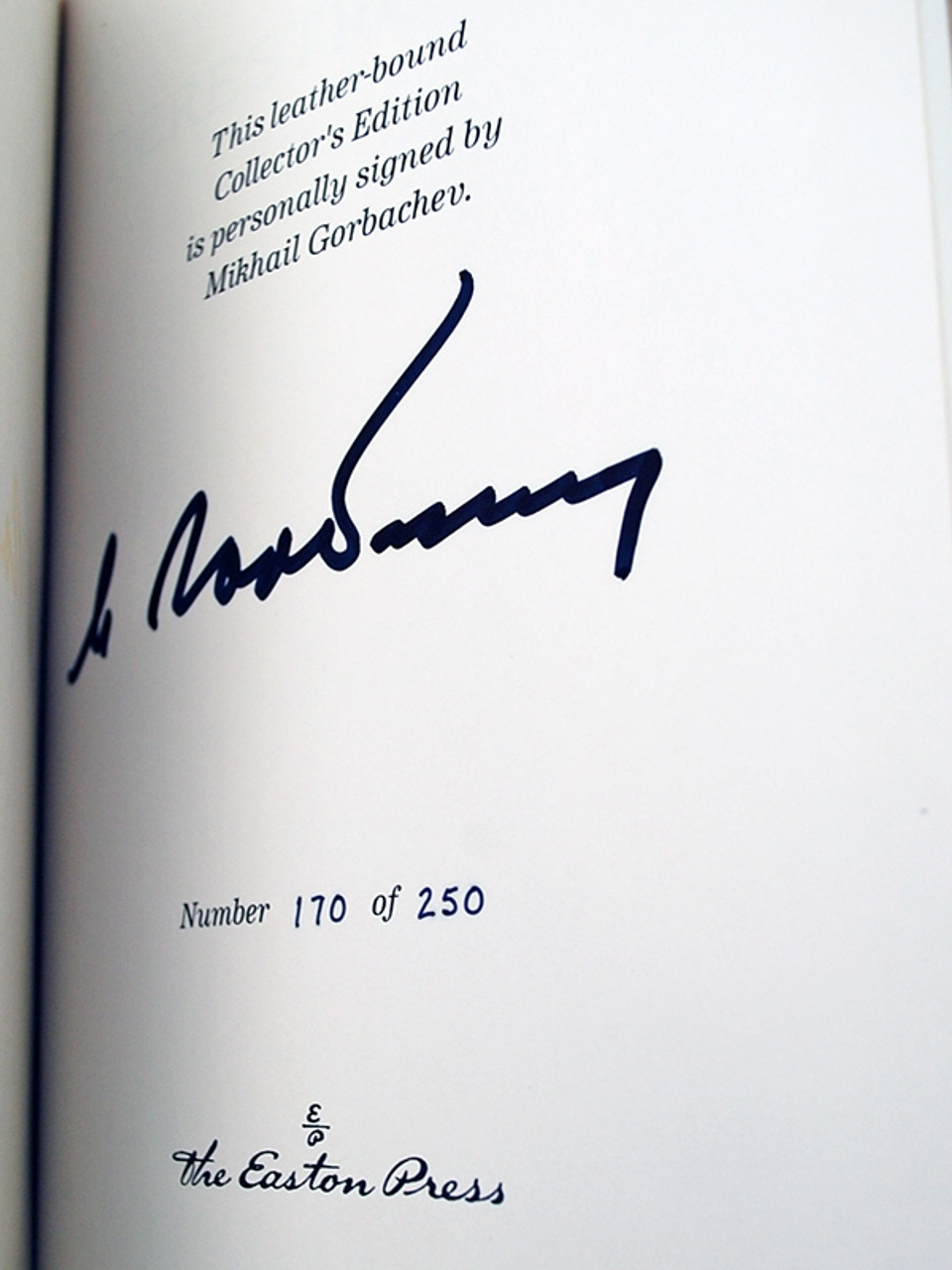 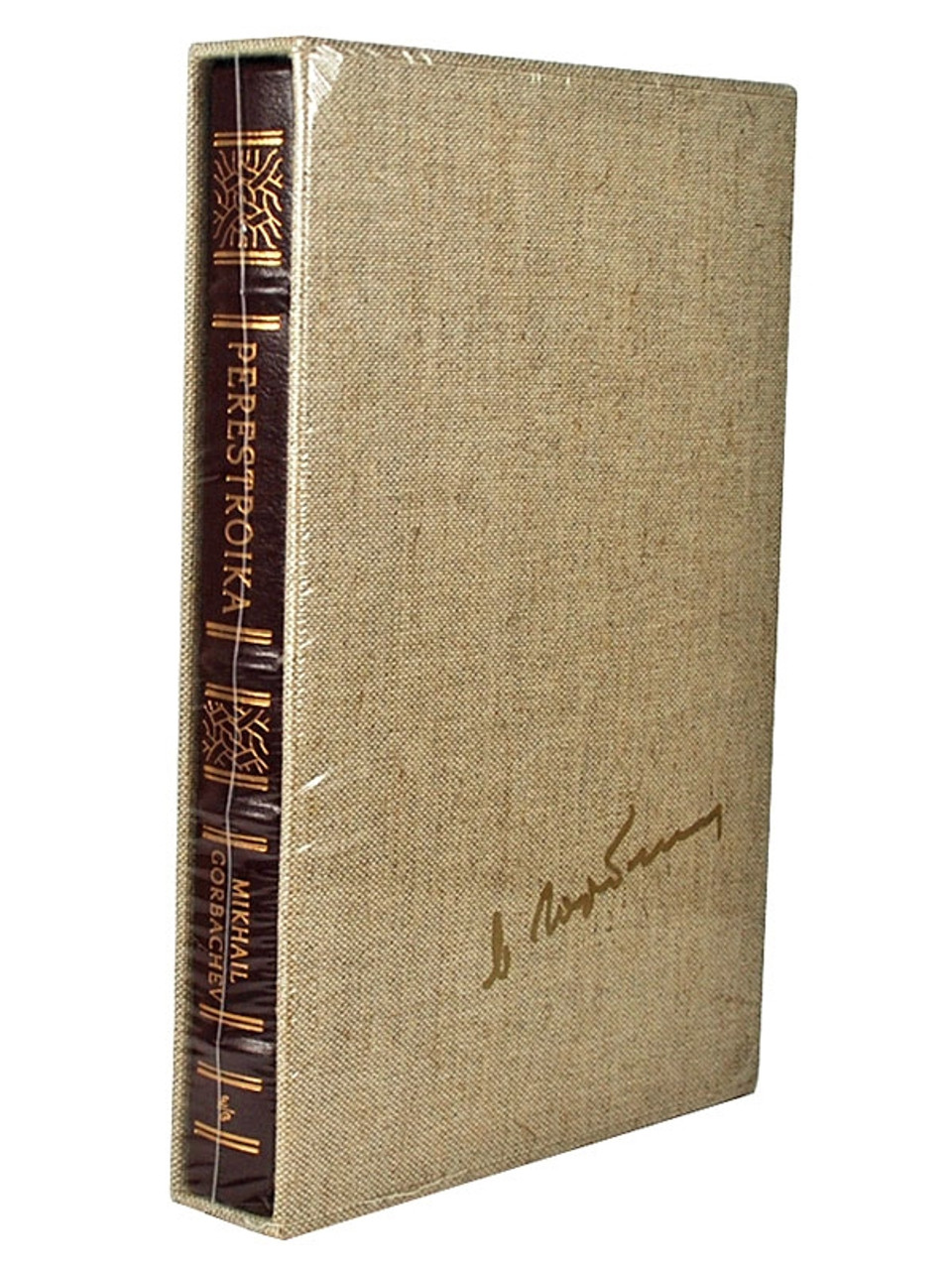 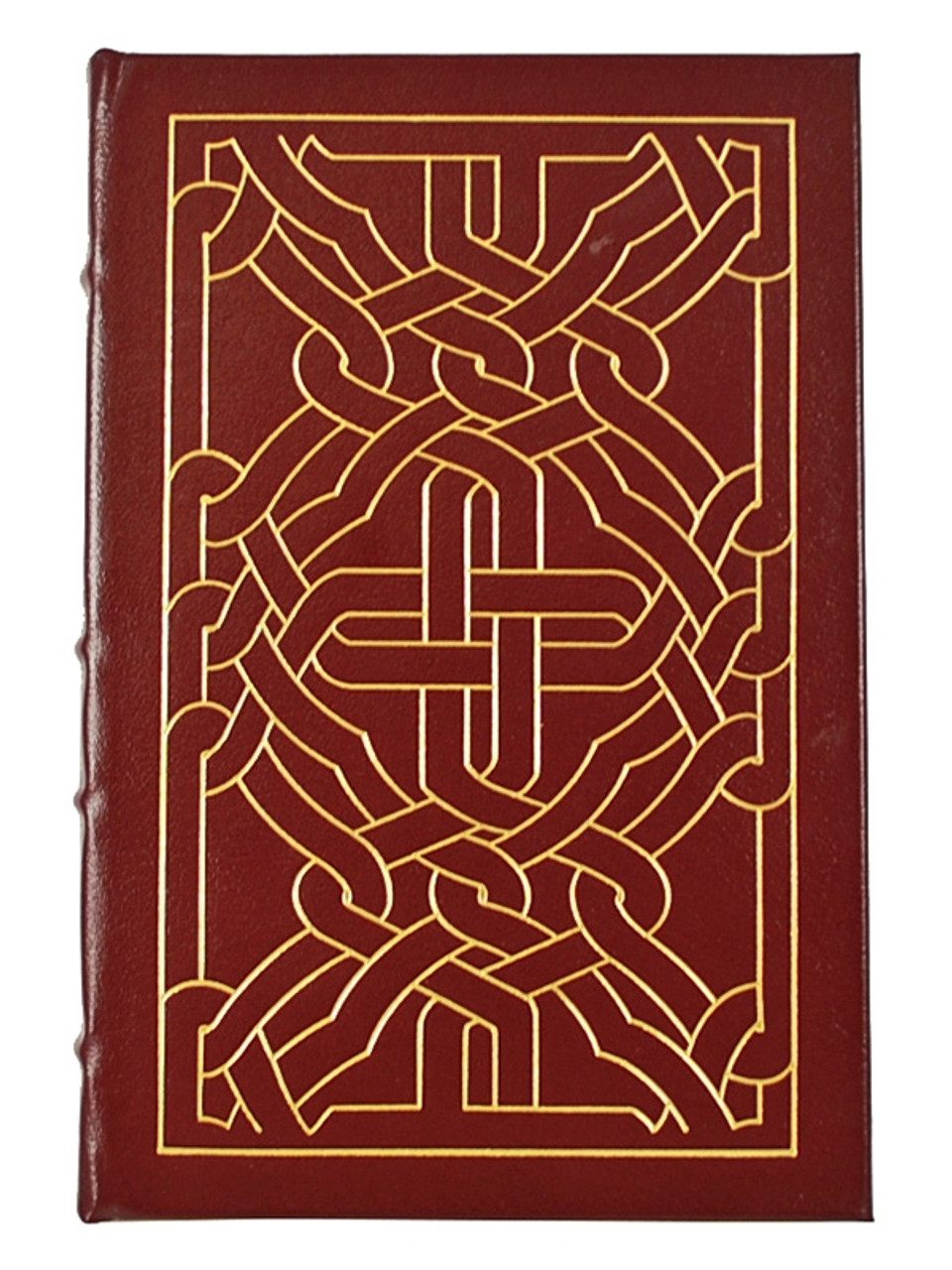 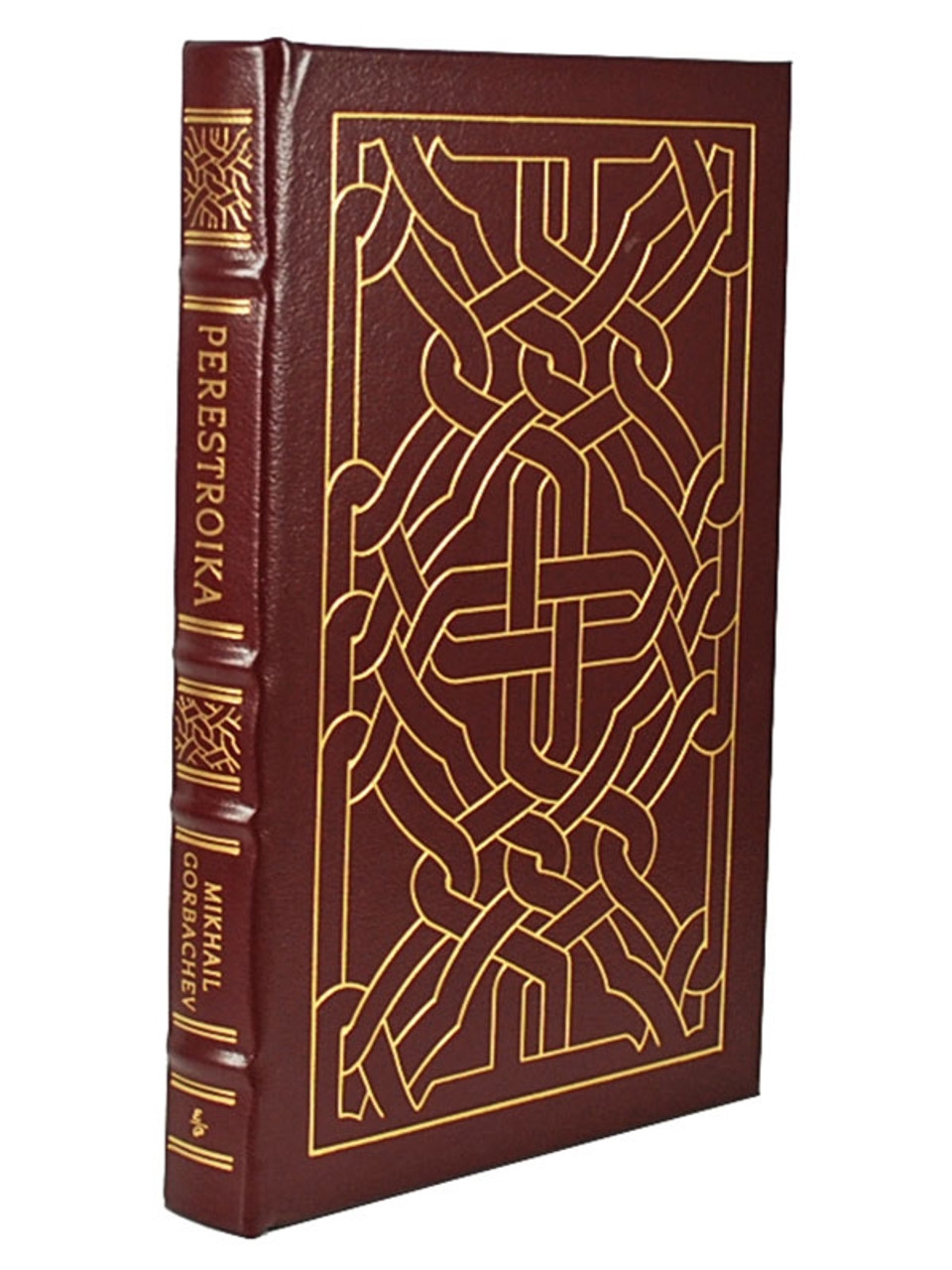 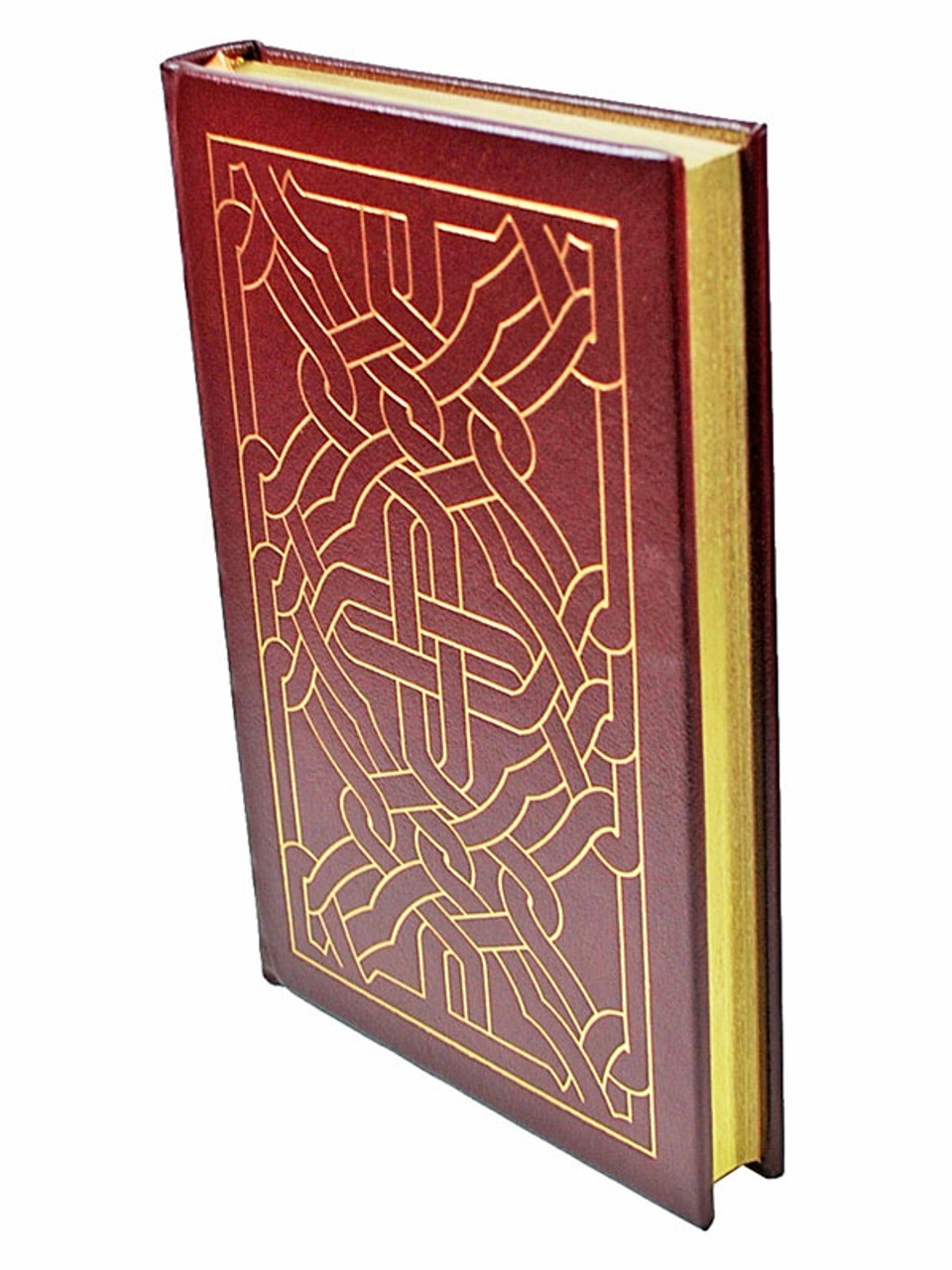 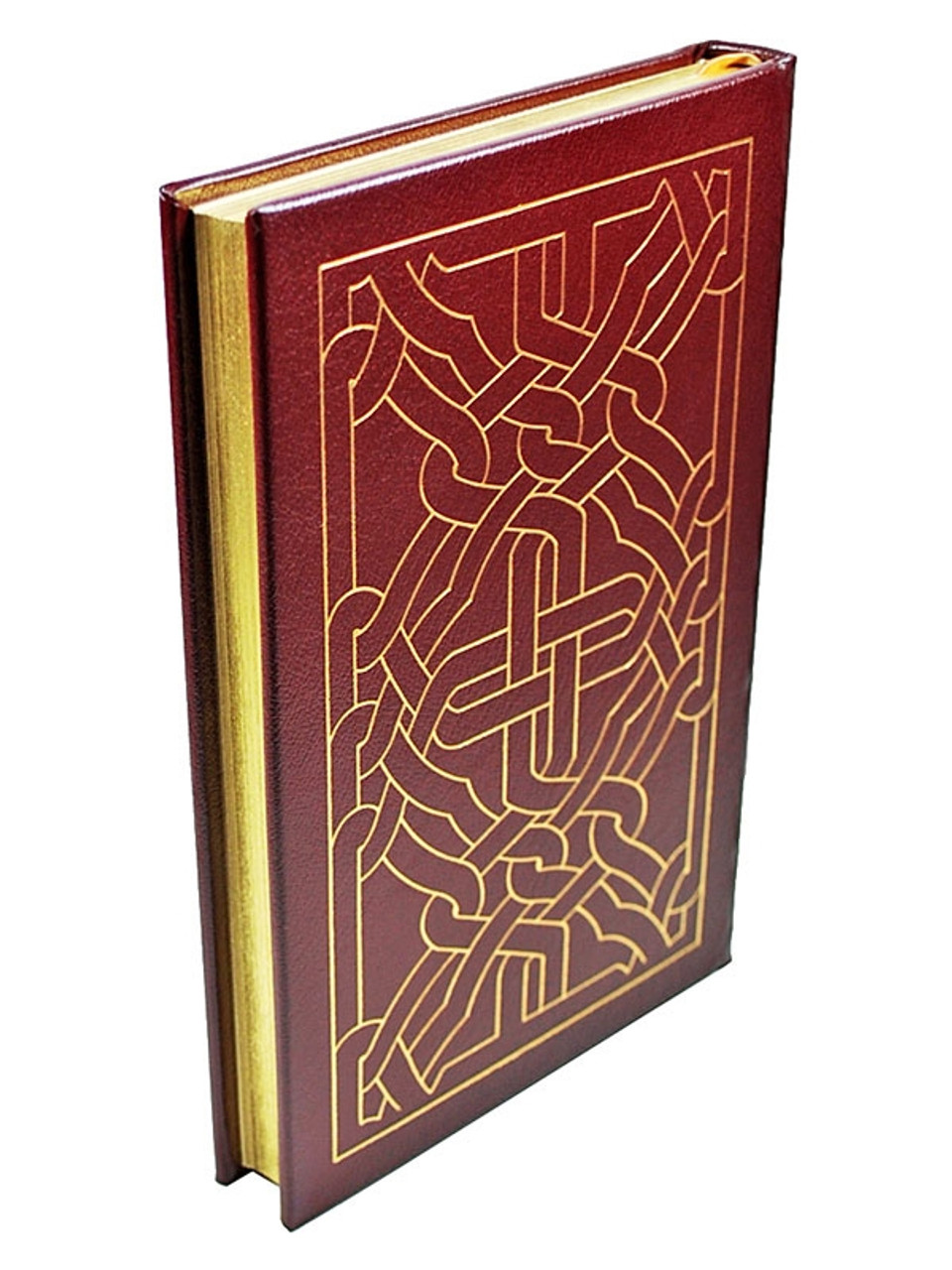 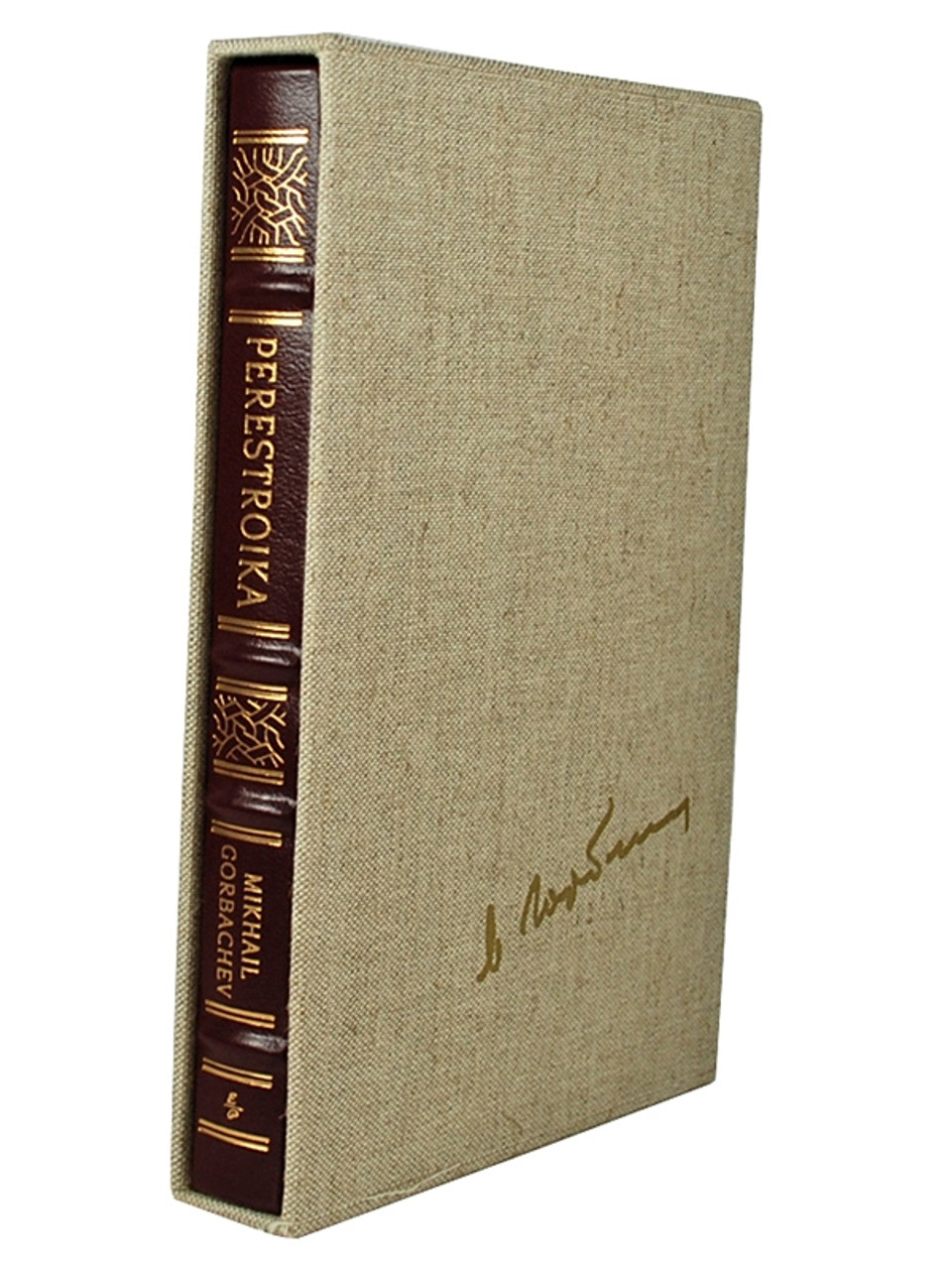 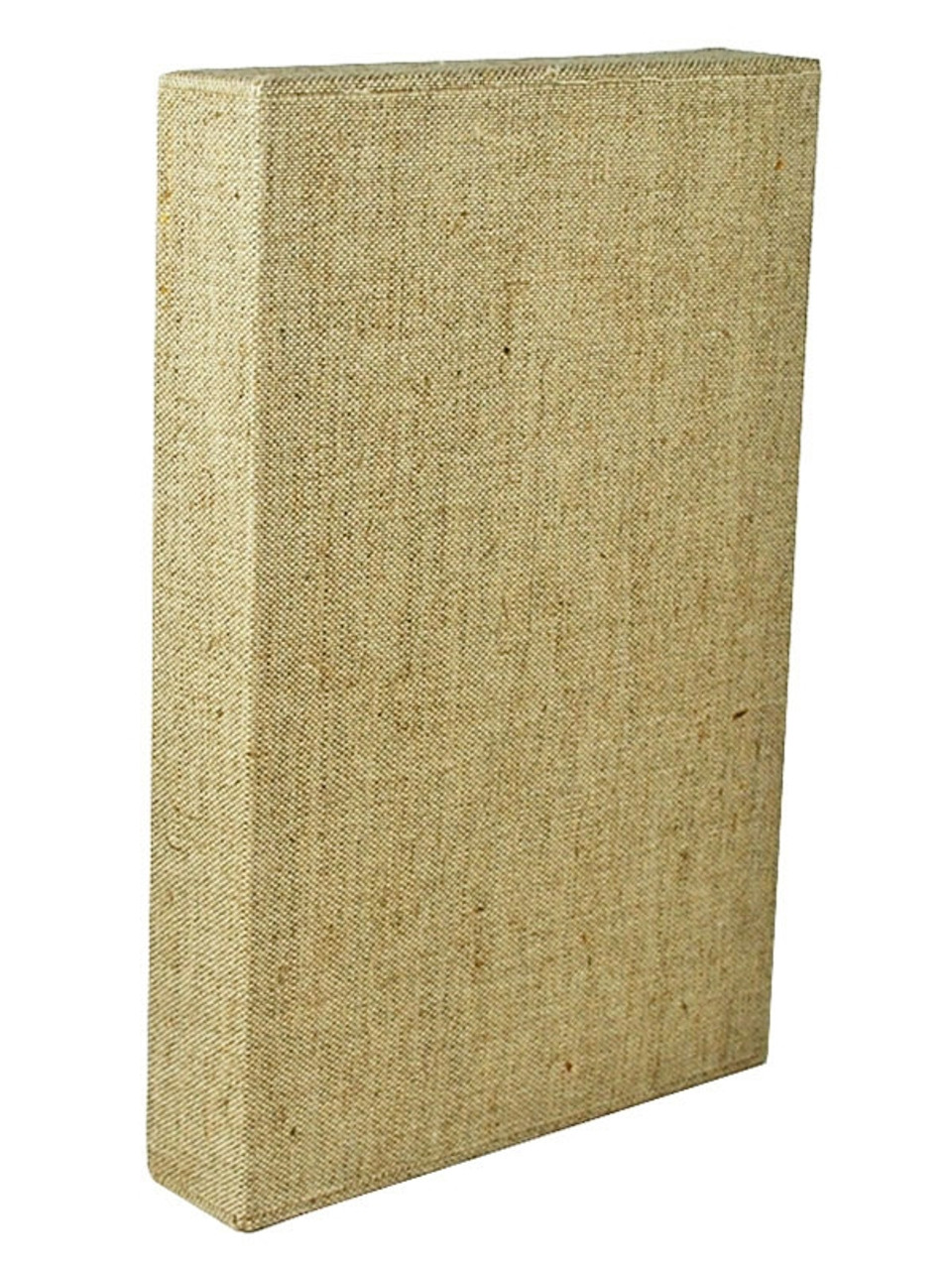 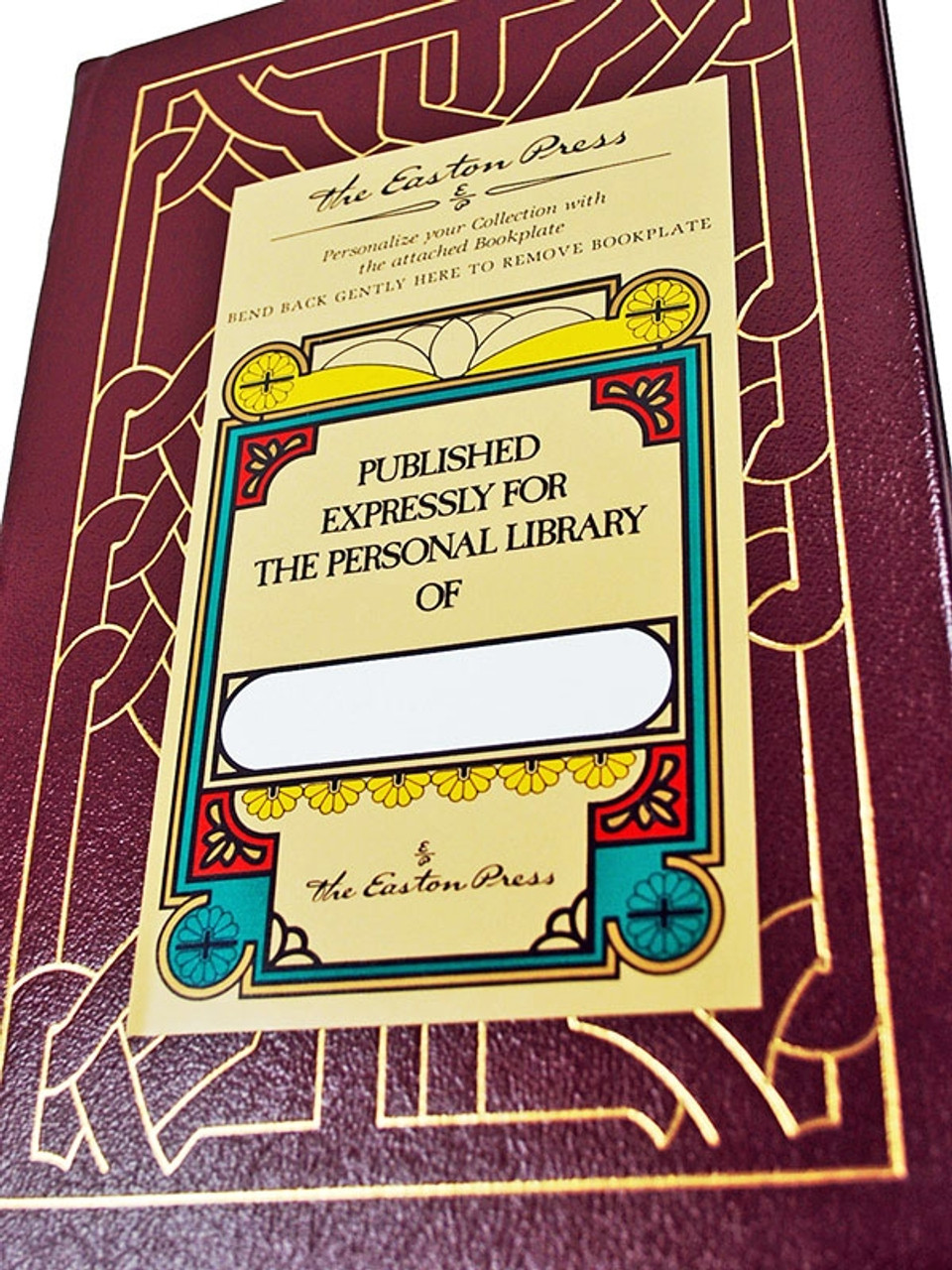 Easton Press. Norwalk, CT. 1994 "Perestroika: New Thinking for Our Country and the World" Mikhail Gorbachev. Signed Limited Edition. Full genuine leather. Limited to only 250 signed and numbered copies. This is number 170. "SIGNED LIMITED EDITION" as stated on the title page. Original publisher issued cloth slipcase. One of the most rare and valuable Easton Press signed limited editions ever produced. A collector's heirloom edition that is luxuriously bound in full premium leather. A very fine signed copy in the original shrink-wrap, which was removed only once to verify autograph and number.

This book (Perestroika: New Thinking for Our Country and the World) was written just a few years before the Soviet Union collapse, yet provides vital clues to explain the then impending collapse. In the first 30 pages of the book, Gorbachev provides a searing indictment of Soviet society. The economy couldn't produce useful goods and services. The people were demoralized. And the Communist Party, which controlled the government, perpetuated these and numerous other dysfunctional social systems through its top-down mode of operation.

Attempting to revitalize Soviet society, in the mid 1980's, the party finally began its "glasnost" (opening up) and "perestroika" (restructuring) campaigns. Glasnost was an attempt to allow people to freely criticize the government. Perestroika was the attempt to reform and restructure the economy. But these were either too little or too late. The collapse came anyway.

The mystery in the Western world was why it seemingly happened so quickly, and why no one in the West anticipated it. Gorbachev's description of Soviet society illuminates that the collapse did not happen quickly; it had been developing for decades. In a simple phrase, socialism as practiced by the Soviets just did not work. Gorbachev attributes the problems in Soviet society to the government's top-down management style. Orders came from the top. Everyone else was conditioned to simply obey. 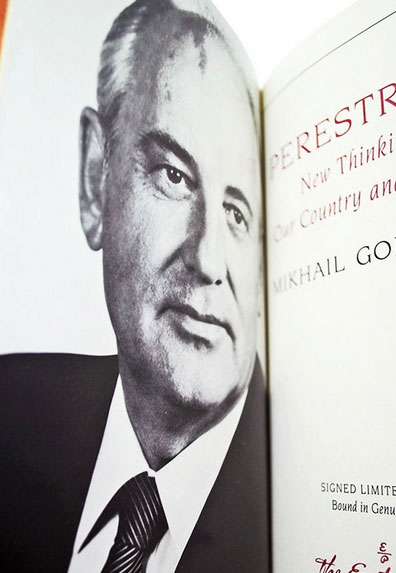 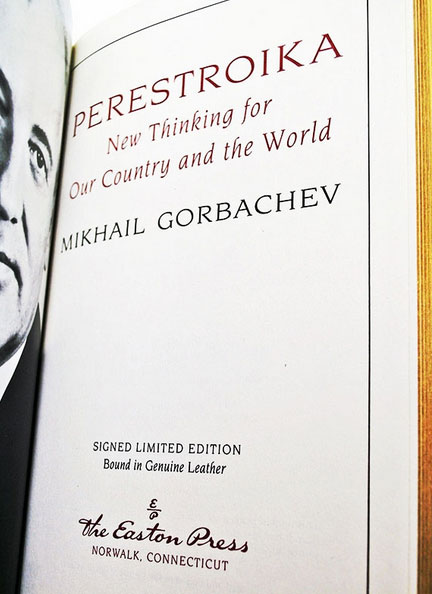 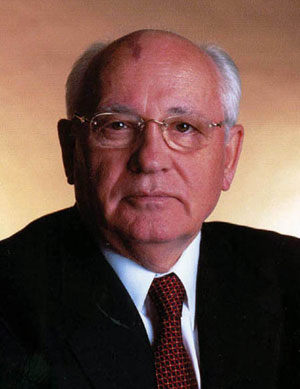 Gorbachev was born in Stavropol Krai into a peasant Ukrainian–Russian family, and in his teens operated combine harvesters on collective farms. He graduated from Moscow State University in 1955 with a degree in law. While he was at the university, he joined the Communist Party, and soon became very active within it. In 1970, he was appointed the First Party Secretary of the Stavropol Regional Committee, First Secretary to the Supreme Soviet in 1974, and appointed a member of the Politburo in 1979. Within three years of the death of Soviet leader Leonid Brezhnev, following the brief "interregna" of Andropov and Chernenko, Gorbachev was elected General Secretary by the Politburo in 1985. Before he reached the post, he had occasionally been mentioned in Western newspapers as a likely next leader and a man of the younger generation at the top level.

Gorbachev's policies of glasnost ("openness") and perestroika ("restructuring") and his reorientation of Soviet strategic aims contributed to the end of the Cold War. He removed the constitutional role of the Communist Party in governing the state, and inadvertently led to the dissolution of the Soviet Union. He was awarded the Otto Hahn Peace Medal in 1989, the Nobel Peace Prize in 1990 and the Harvey Prize in 1992, as well as honorary doctorates from various universities.

As New in the original shrink-wrap, which was slipped off the book only once to verify the autograph and number. Very Fine in Very Fine slipcase. A wonderful bright clean copy without any marks, writing, or stamps. No bookplates attached or indication of any removed. Unread book with tight spine, and free of any scratches to the gilded page edges. No bumped corners.

Personally hand signed by Daniel Keyes on a special limitation page nhance your collectible library with this luxurious leather bound heirloom from Easton Press. One of only 1200 signed limited...