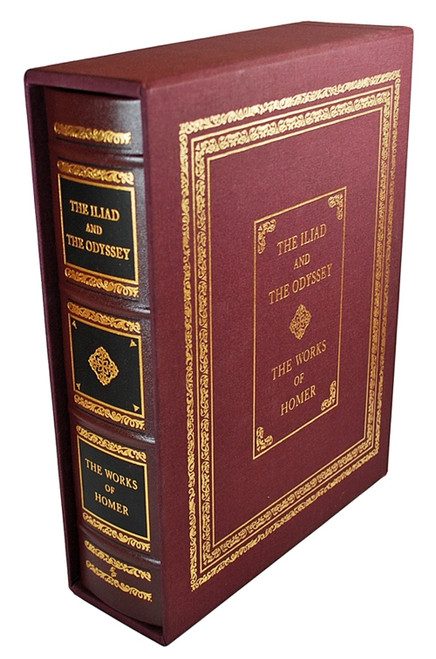 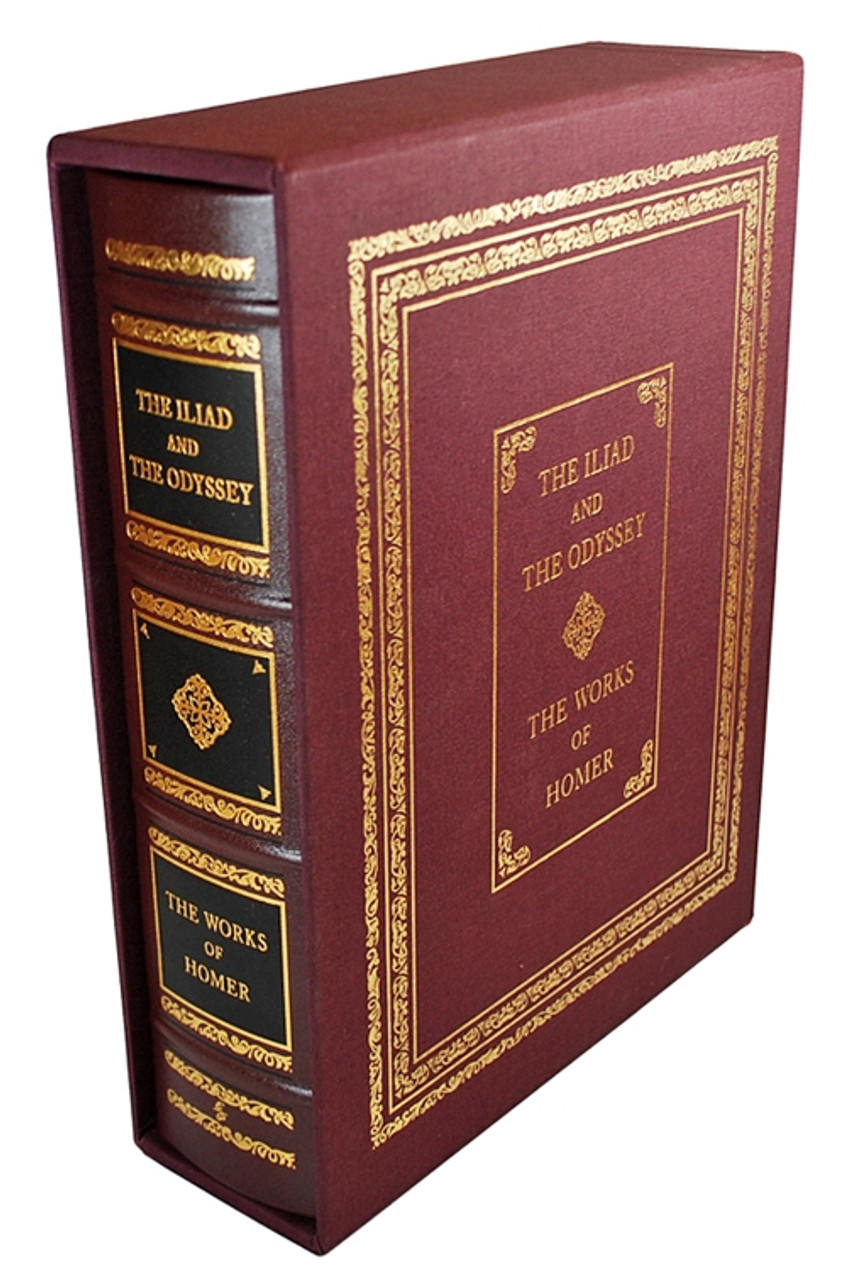 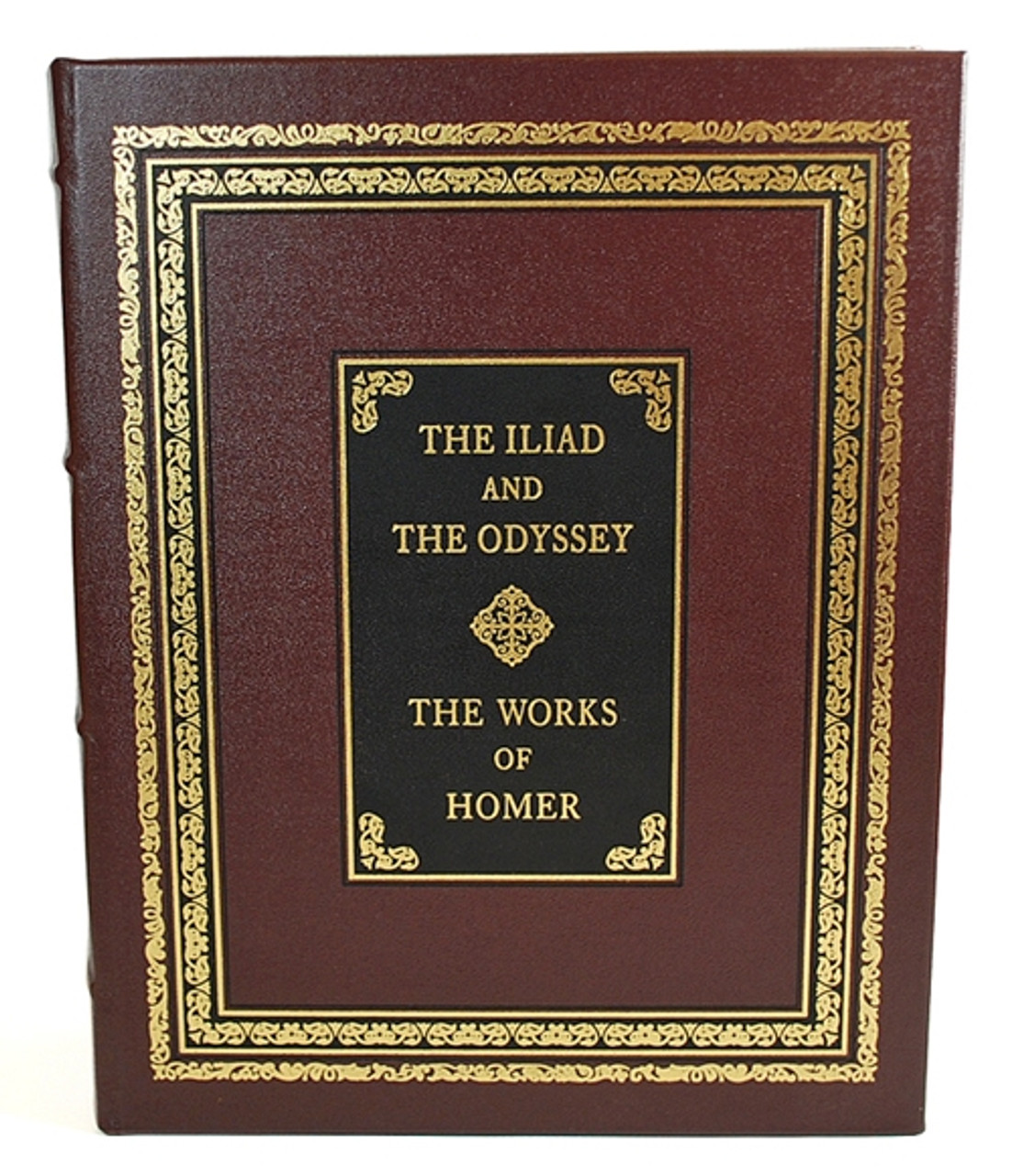 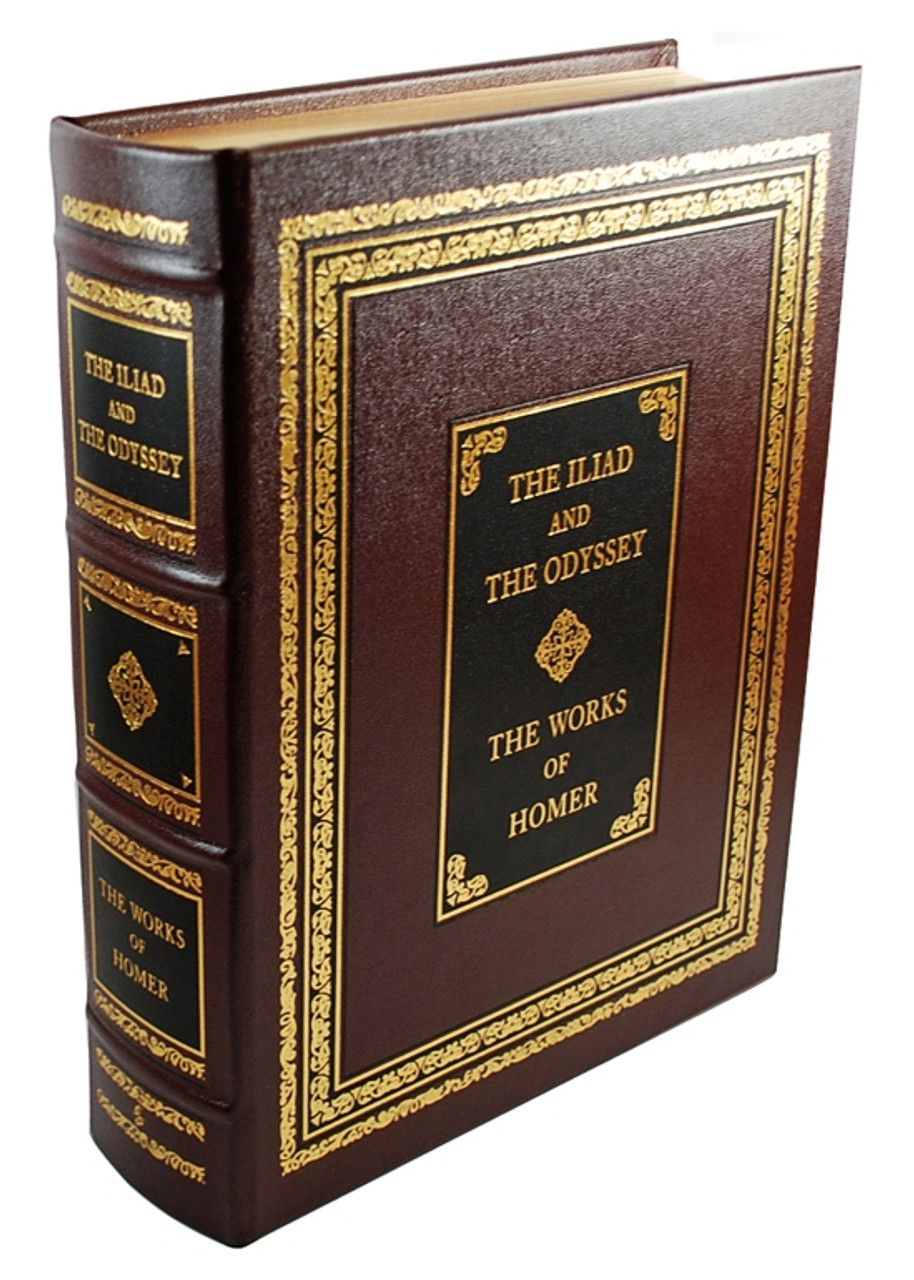 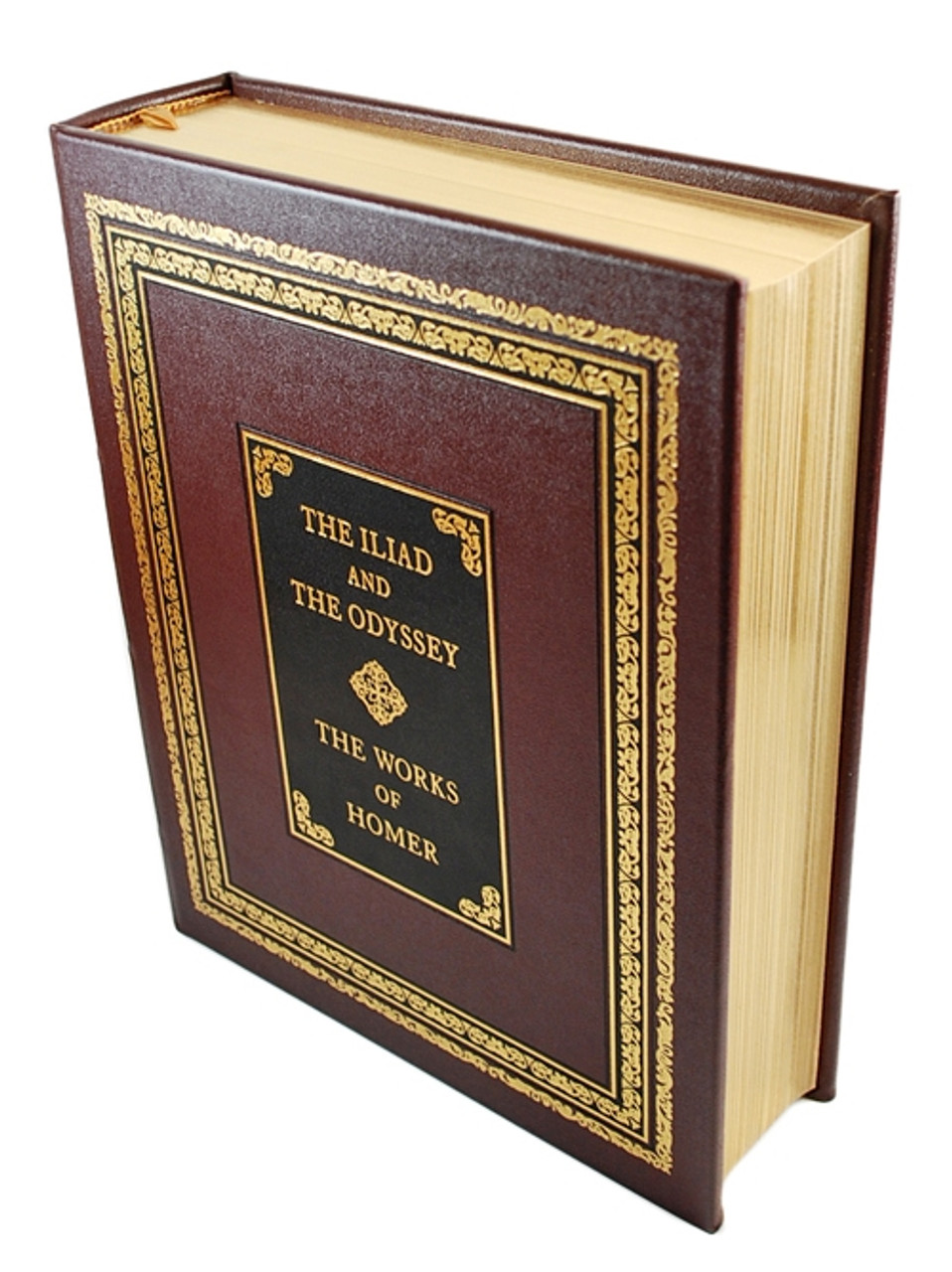 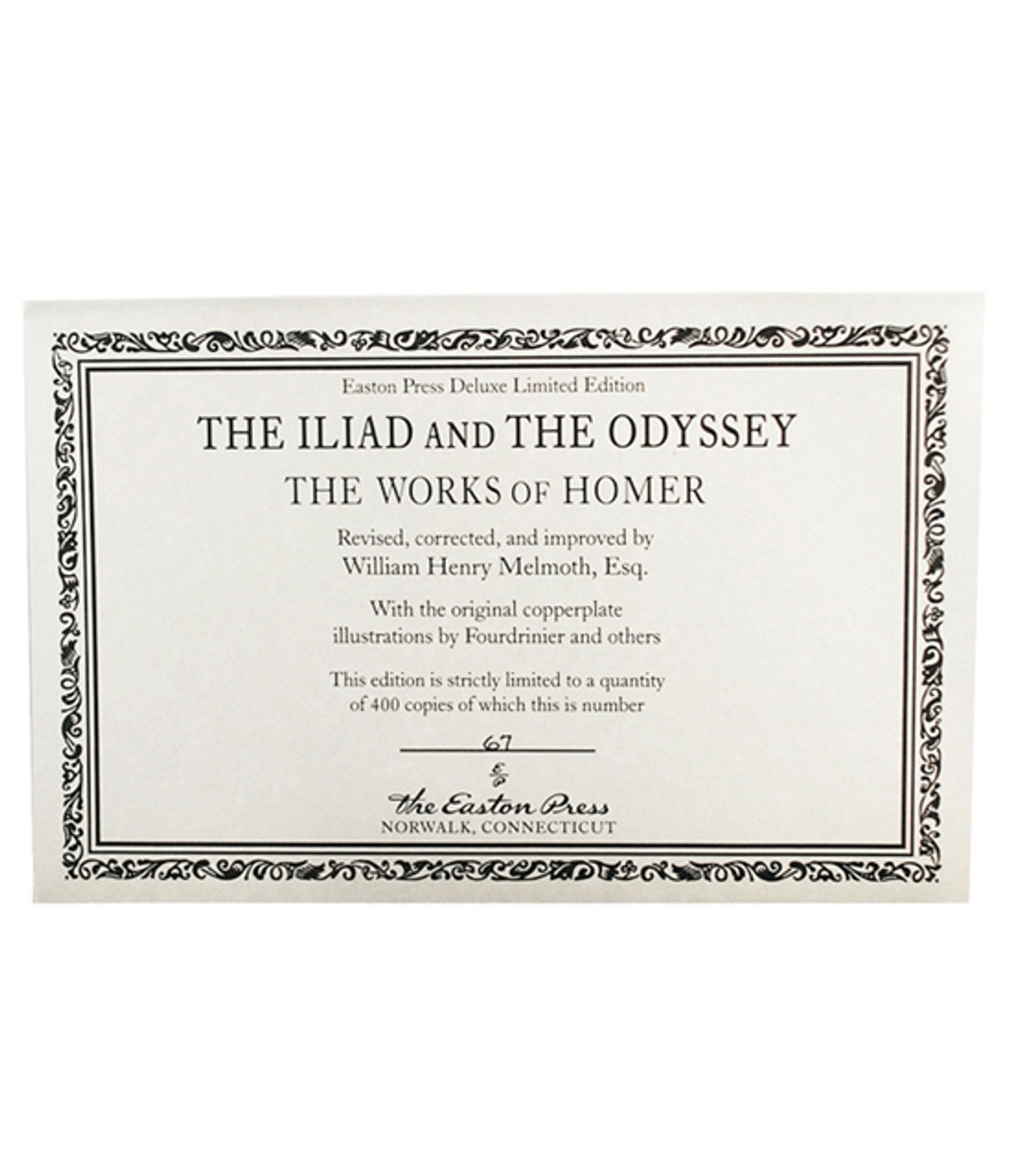 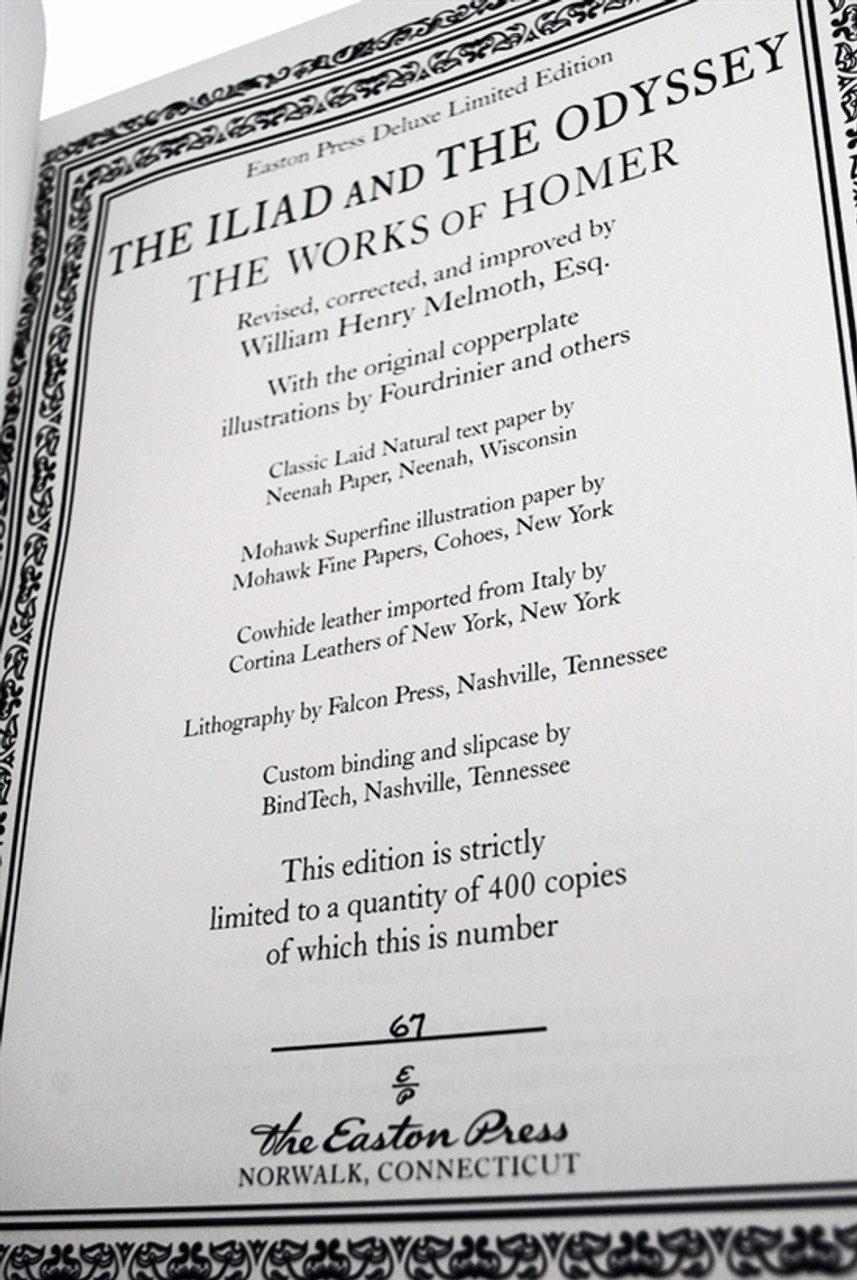 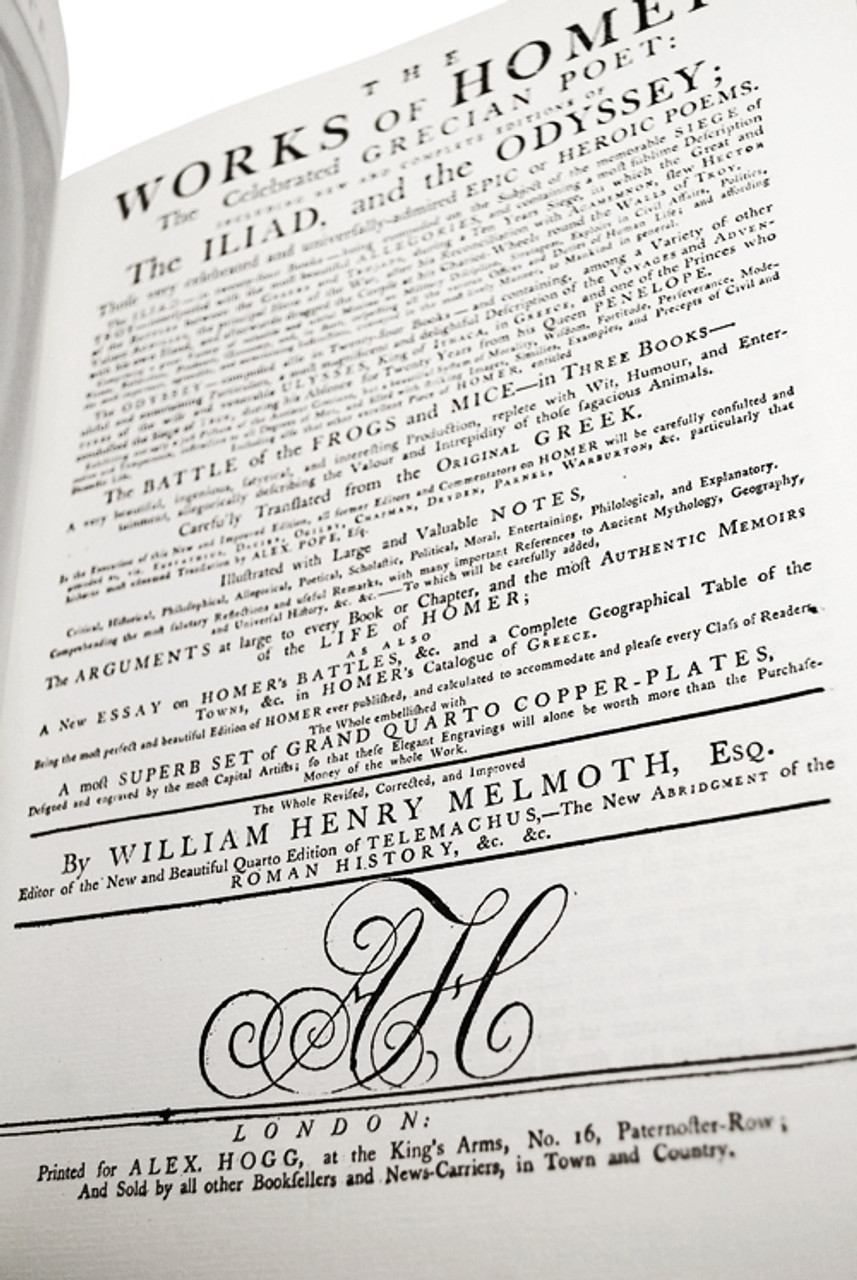 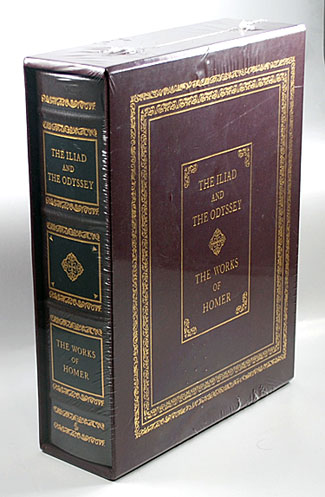 Easton Press, Norwalk CT. "The Iliad and The Odyssey: The Works of Homer". A Leather-Bound Deluxe Limited Edition of only 400 hand-numbered copies. Letter of Authenticity. A mammoth deluxe volume measuring 8 1/2" x 10 3/4". 748 pages.

The heroic adventure of the ancient world, in an extraordinary re-creation of the handsome illustrated 18th-century edition.


For thousands of years, The Iliad & Odyssey have delighted readers with the stories of Achilles, the siege of Troy, brave Odysseus and his danger-filled journey home.

Now, Homer's epic tales of ancient war and adventure is brought to life in this beautiful edition that re-creates how they were offered to readers over 200 years ago. This edition also includes the complete text and all the 40 period-correct illustrations from the 1780 edition.

Easton Press Deluxe Limited Edition. The Iliad and The Odyssey. The Works of Homer. Includes a letter of limitation from the publisher. Revised, corrected, and improved by William Henry Melmoth, Esq. With the original copperplate illustrations by Fourdrinier and others. This edition is strictly limited to a quantity of 400 copies.

The Iliad (sometimes referred to as the Song of Ilion or Song of Ilium) is an ancient Greek epic poem in dactylic hexameter, traditionally attributed to Homer. Set during the Trojan War, the ten-year siege of the city of Troy (Ilium) by a coalition of Greek states, it tells of the battles and events during the weeks of a quarrel between King Agamemnon and the warrior Achilles.

Although the story covers only a few weeks in the final year of the war, the Iliad mentions or alludes to many of the Greek legends about the siege; the earlier events, such as the gathering of warriors for the siege, the cause of the war, and related concerns tend to appear near the beginning. Then the epic narrative takes up events prophesied for the future, such as Achilles' looming death and the sack of Troy, prefigured and alluded to more and more vividly, so that when it reaches an end, the poem has told a more or less complete tale of the Trojan War.

The Iliad is paired with something of a sequel, the Odyssey, also attributed to Homer. Along with the Odyssey, the Iliad is among the oldest extant works of Western literature, and its written version is usually dated to around the eighth century BC. Recent statistical modelling based on language evolution has found it to date to 760-710 BC. In the modern vulgate (accepted version), the Iliad contains 15,693 lines; it is written in Homeric Greek, a literary amalgam of Ionic Greek and other dialects.

The Odyssey is one of two major ancient Greek epic poems attributed to Homer. It is, in part, a sequel to the Iliad, the other work ascribed to Homer. The poem is fundamental to the modern Western canon, and is the second oldest extant work of Western literature, the Iliad being the oldest. It is believed to have been composed near the end of the 8th century BC, somewhere in Ionia, the Greek coastal region of Anatolia.

The poem mainly centers on the Greek hero Odysseus (known as Ulysses in Roman myths) and his journey home after the fall of Troy. It takes Odysseus ten years to reach Ithaca after the ten-year Trojan War. In his absence, it is assumed he has died, and his wife Penelope and son Telemachus must deal with a group of unruly suitors, the Mnesteres or Proci, who compete for Penelope's hand in marriage.

It continues to be read in the Homeric Greek and translated into modern languages around the world. Many scholars believe that the original poem was composed in an oral tradition by an aoidos (epic poet/singer), perhaps a rhapsode (professional performer), and was more likely intended to be heard than read. The details of the ancient oral performance, and the story's conversion to a written work inspire continual debate among scholars. The Odyssey was written in a poetic dialect of Greek, a literary amalgam of Aeolic Greek, Ionic Greek, and other Ancient Greek dialects, and comprises 12,110 lines of dactylic hexameter. Among the most noteworthy elements of the text are its non-linear plot, and the influence on events of choices made by women and serfs, besides the actions of fighting men. In the English language as well as many others, the word odyssey has come to refer to an epic voyage.

The Odyssey has a lost sequel, the Telegony, which was not written by Homer. It was usually attributed in Antiquity to Cinaethon of Sparta, but in one source was said to have been stolen from Musaeus by Eugamon or Eugammon of Cyrene (see Cyclic poets).

In the Western classical tradition, Homer is the author of the Iliad and the Odyssey, and is revered as the greatest of ancient Greek epic poets. These epics lie at the beginning of the Western canon of literature, and have had an enormous influence on the history of literature.

When he lived is unknown. Herodotus estimates that Homer lived 400 years before his own time, which would place him at around 850 BC, while other ancient sources claim that he lived much nearer to the supposed time of the Trojan War, in the early 12th century BC. Most modern researchers place Homer in the 7th or 8th centuries BC.

The formative influence of the Homeric epics in shaping Greek culture was widely recognized, and Homer was described as the teacher of Greece. Homer's works, which are about fifty percent speeches, provided models in persuasive speaking and writing that were emulated throughout the ancient and medieval Greek worlds. Fragments of Homer account for nearly half of all identifiable Greek literary papyrus finds.

Sealed. As New in As New slipcase without any flaws. The condition is of the highest quality without any bumped corners and free of marks to gilded page edges.

You will receive a brand new sealed copy. Photos are from another copy and are shown for illustration purposes only.

De Humani Corporis Fabrica was a major advance in the history of anatomy over the long-dominant work of Galen, and presented itself as such. Limited Edition of only 400 Hand-Numbered Copies Easton...

Add the jewel of your collection with this exquisite first edition reprint of The Outline of History. H.G. Wells, the master of futuristic fiction, is also famous for his history of the world. The...