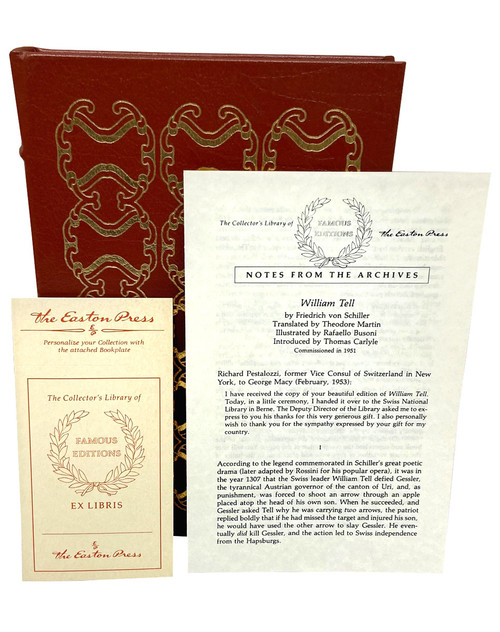 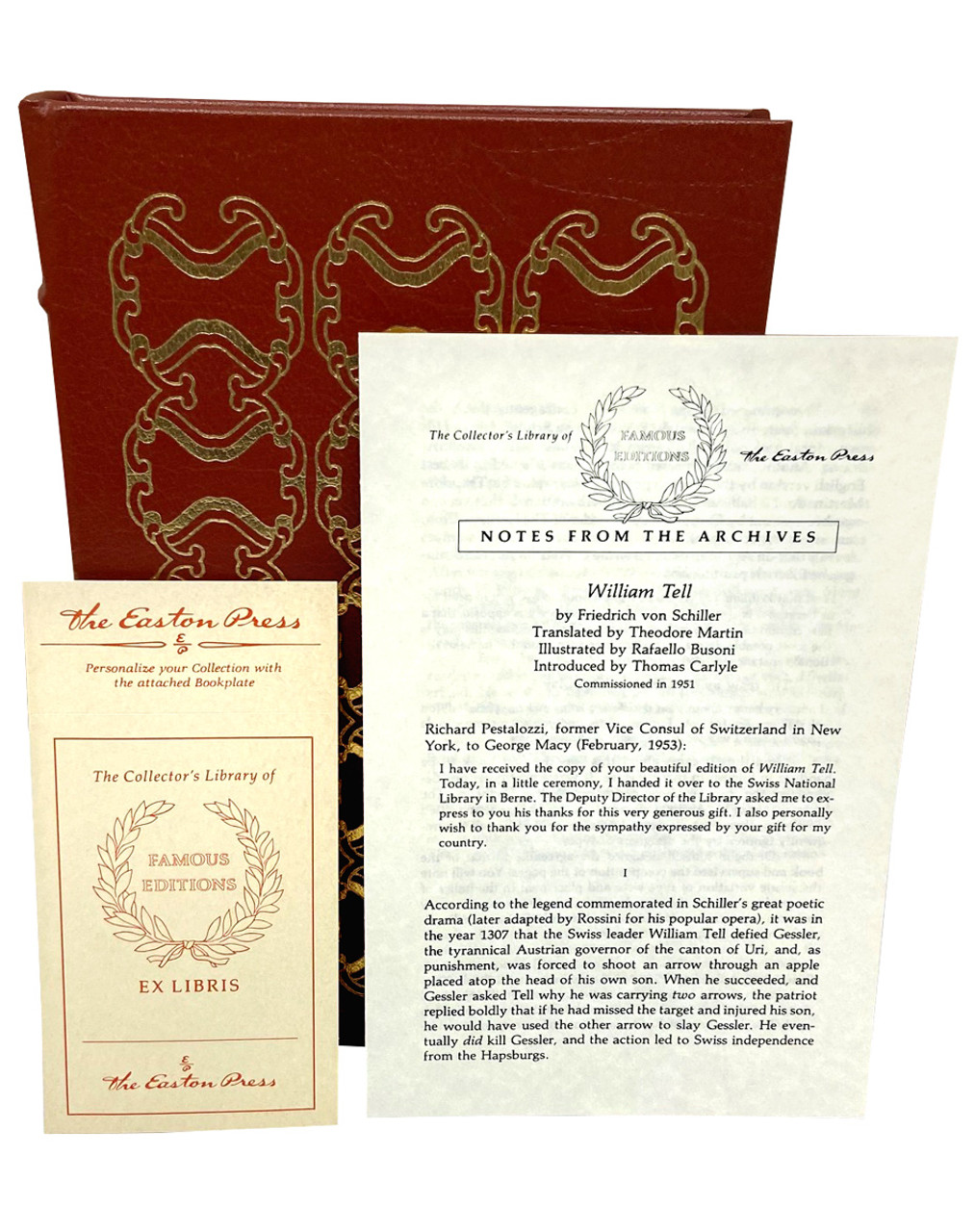 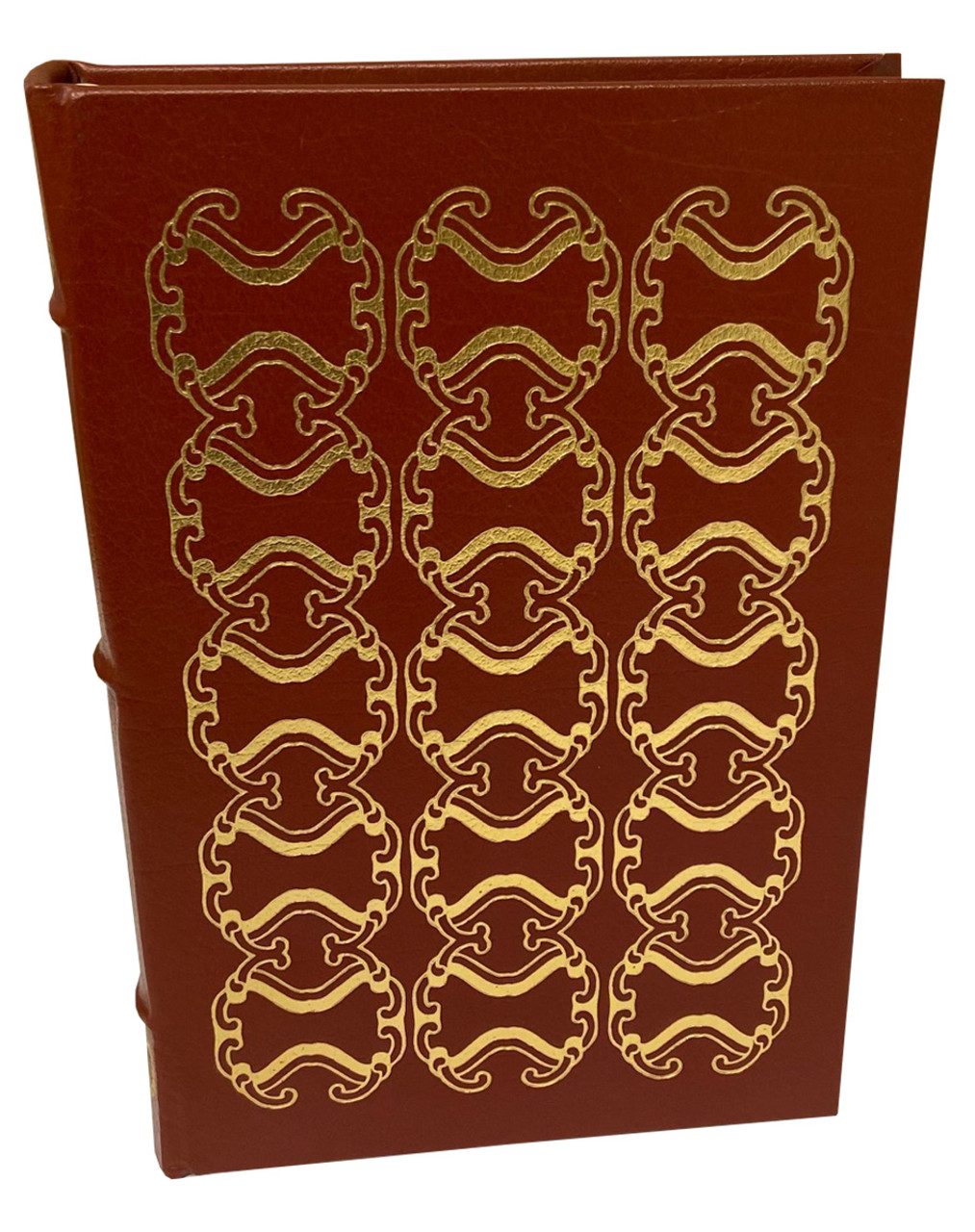 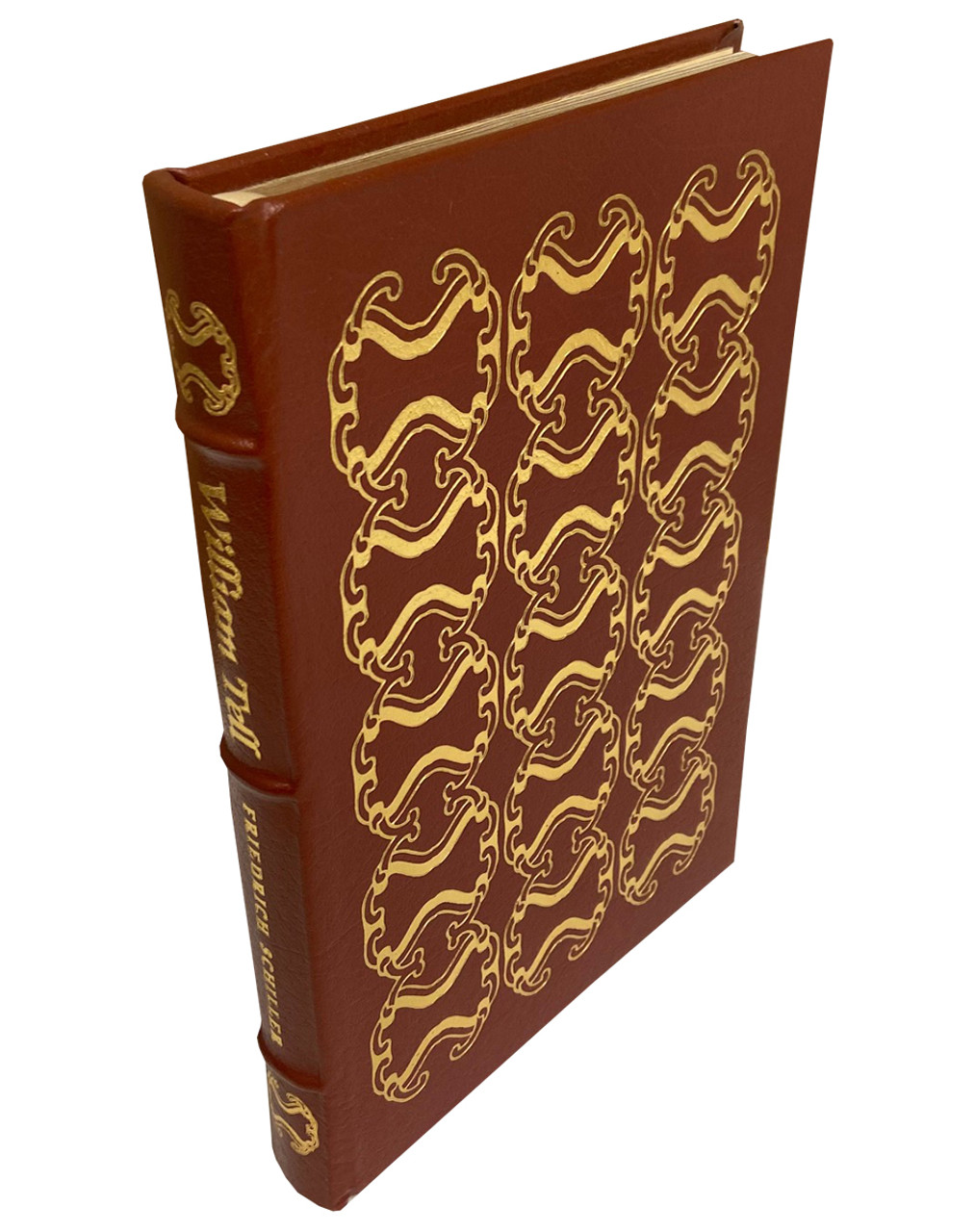 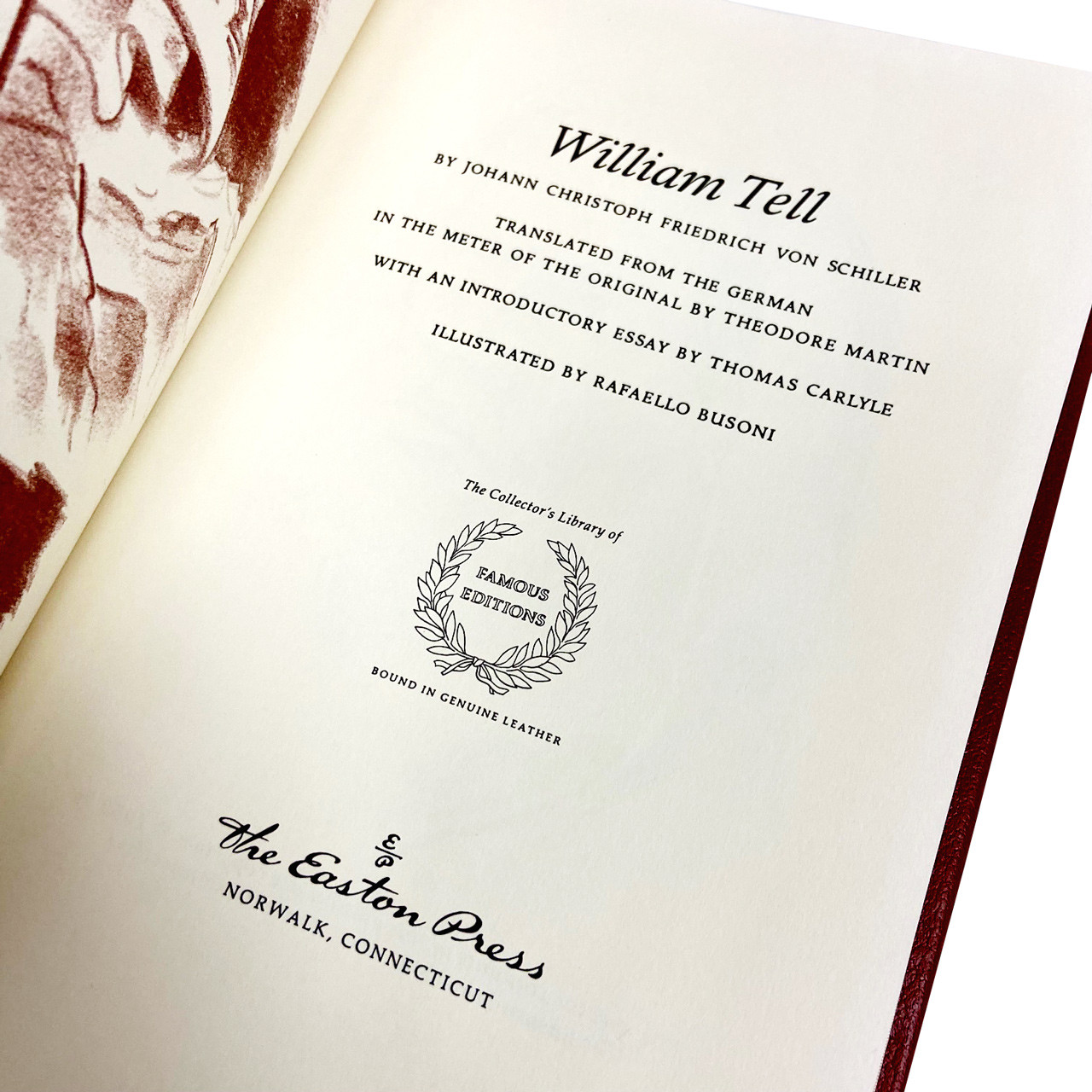 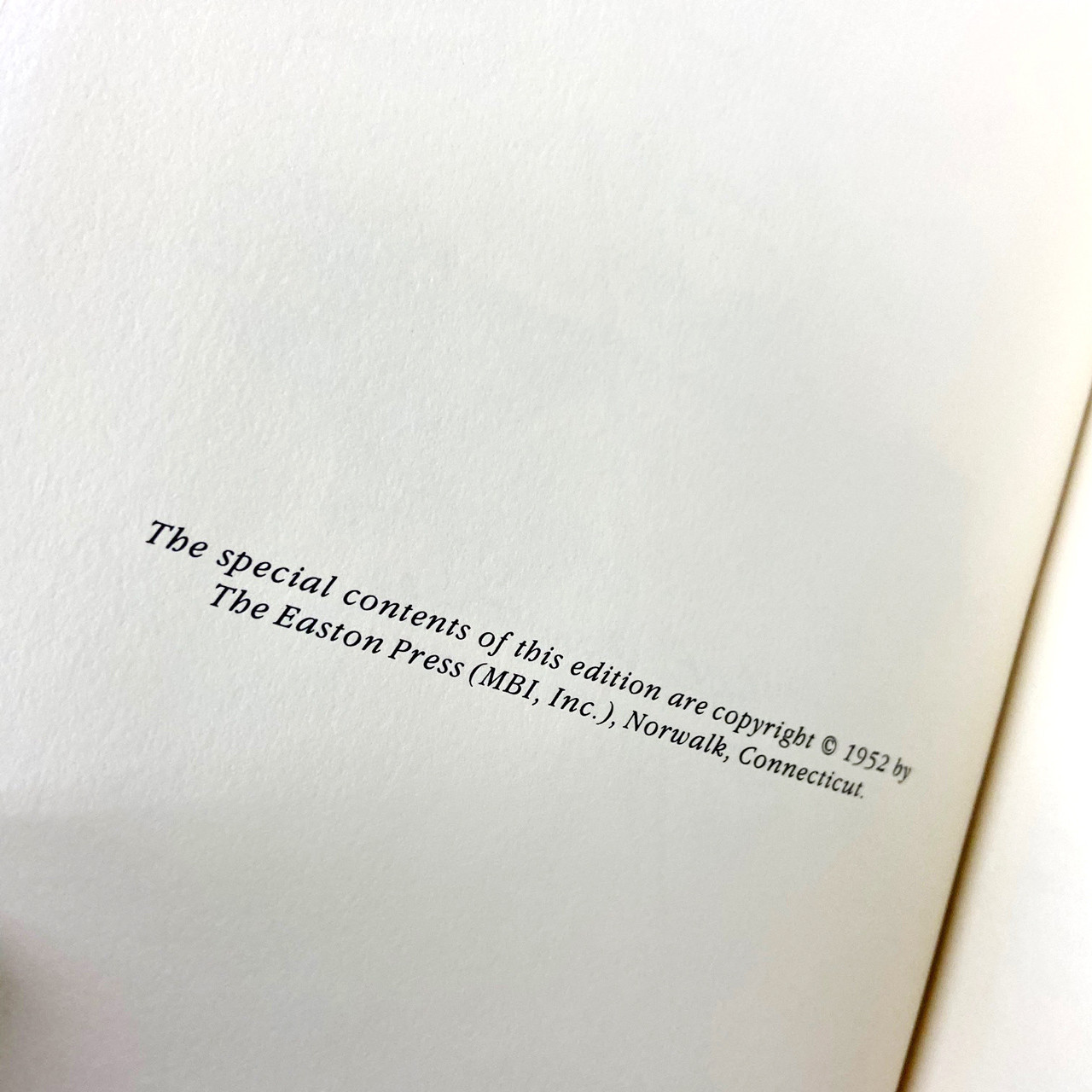 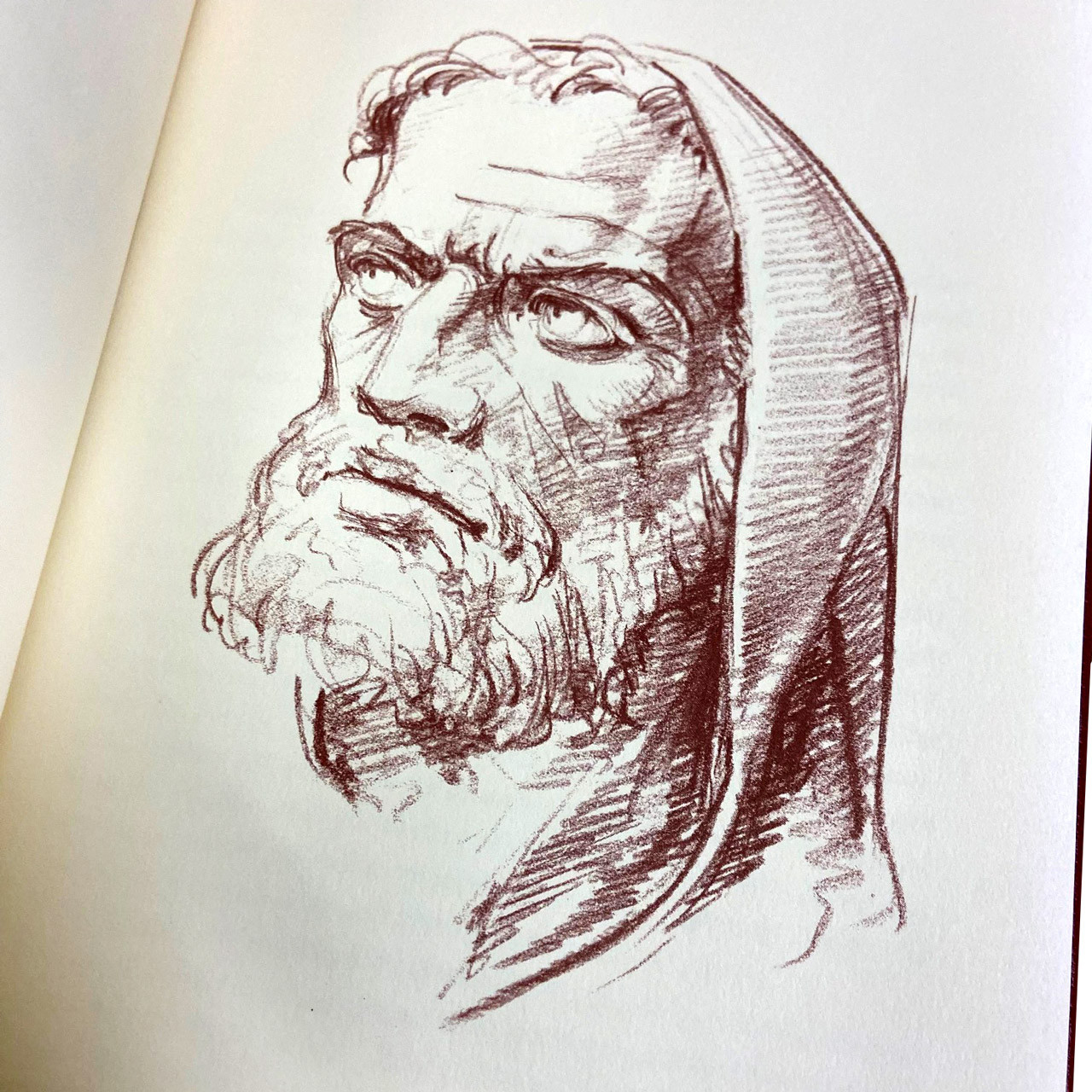 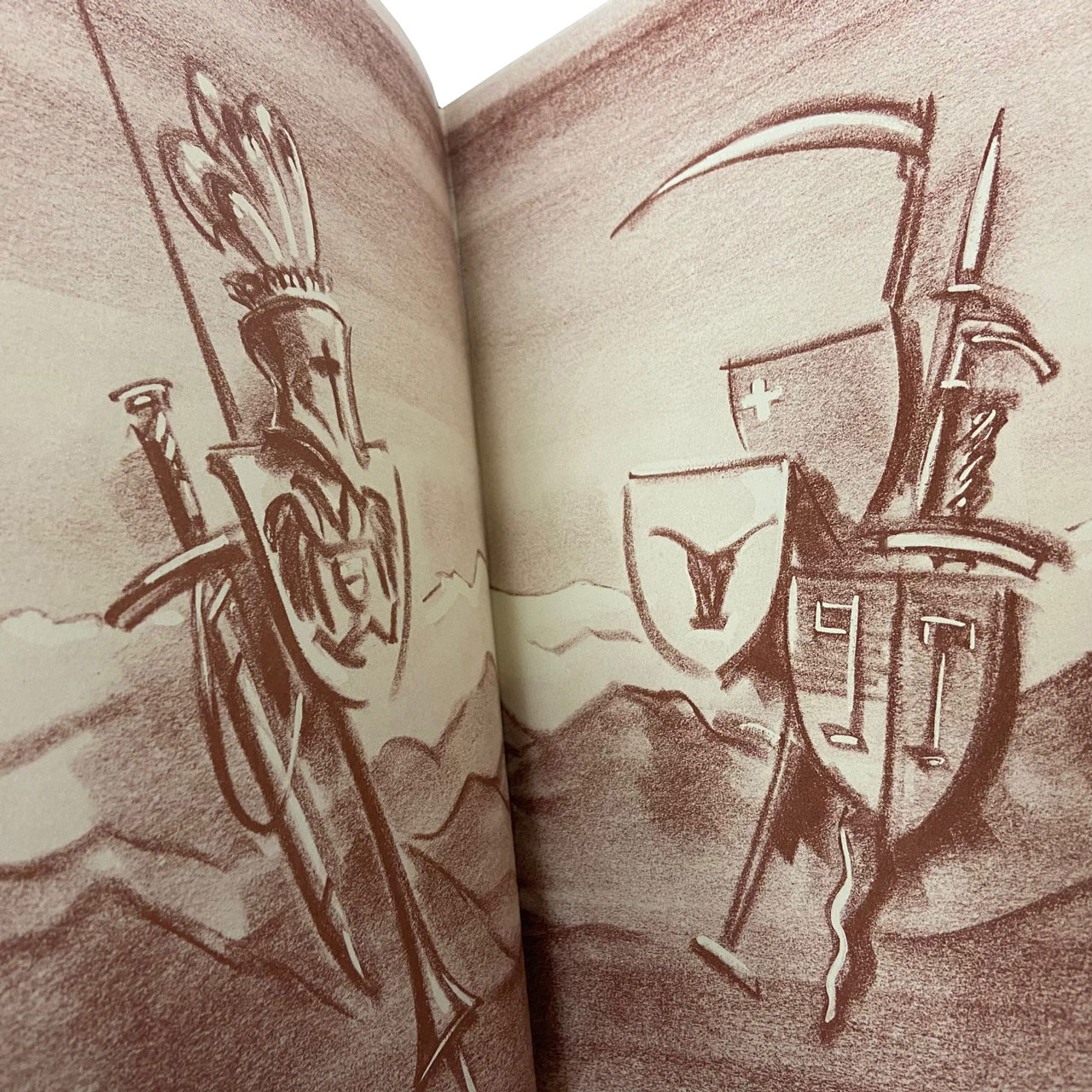 The First Edition 1952 with the date as stated on the copyright page and not the later re-issue that was published in 2004. 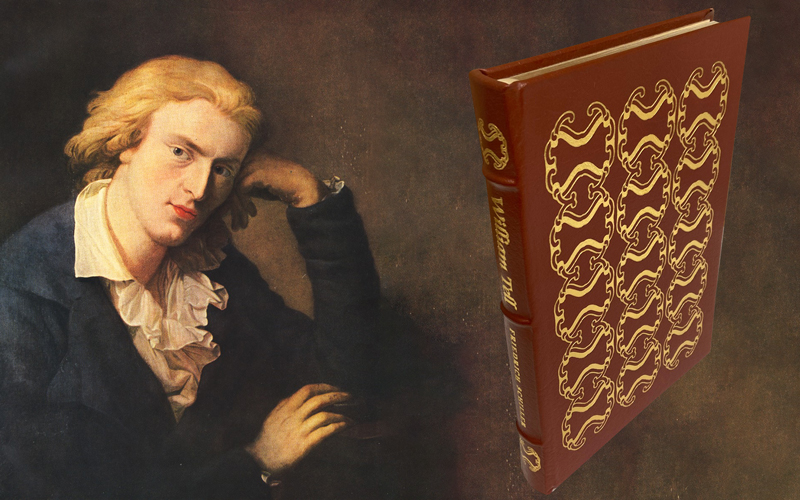 Easton Press,Norwalk CT. "William Tell" by Johann Christoph Friedrich Von Schiller. Translated from the German in the meter of the original by Theodore Martin with an introduction essay by Thomas Carlyle. Bound in genuine leather.

Limited Edition - Collector's Edition. A great unique gift for yourself or for a loved one. A Luxurious Leather Bound Masterpiece. Part of prestigious The Collector's Library of Famous Editions published by Easton Press. Beautifully illustrated. A rare collector's edition that is hard to find, especially in this very fine condition.

One of the most celebrated works of popular literature by a historical writer. A true classic for your home library or office. Includes extra unattached Ex-Libris bookplate for your own personalization.

This is the First Edition 1952 with the date as stated on the copyright page and not the later re-issue that was published in 2004.

The original NOTES FROM THE ARCHIVES are included.

William Tell is a folk hero of Switzerland. According to the legend, Tell was an expert marksman with the crossbow who assassinated Albrecht Gessler, a tyrannical reeve of the Austrian dukes of the House of Habsburg positioned in Altdorf, in the canton of Uri. Tell's defiance and tyrannicide encouraged the population to open rebellion and a pact against the foreign rulers with neighbouring Schwyz and Unterwalden, marking the foundation of the Swiss Confederacy and Tell was considered as the father of the Swiss Confederacy.

Set in the early 14th century (traditional date 1307, during the rule of Albert of Habsburg), the first written records of the legend date to the latter part of the 15th century, when the Swiss Confederacy was gaining military and political influence. Tell is a central figure in Swiss national historiography, along with Arnold von Winkelried, the hero of Sempach (1386). He was important as a symbol during the formative stage of modern Switzerland in the 19th century, known as the period of Restoration and Regeneration, as well as in the wider history of 18th- to 19th-century Europe as a symbol of resistance against aristocratic rule, especially in the Revolutions of 1848 against the House of Habsburg which still ruled Austria five hundred years later.

Enhance your library with this beautiful leather bound collector's edition from Easton Press.   Illustrated by Arthur Szyk. Collector's Library of Famous Editions Notes From The Archives The...