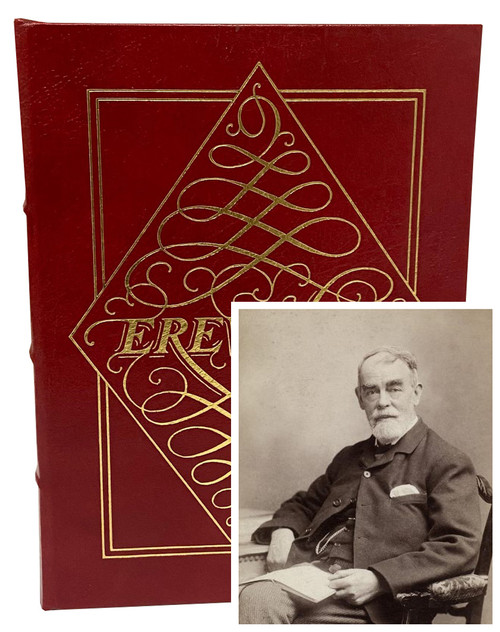 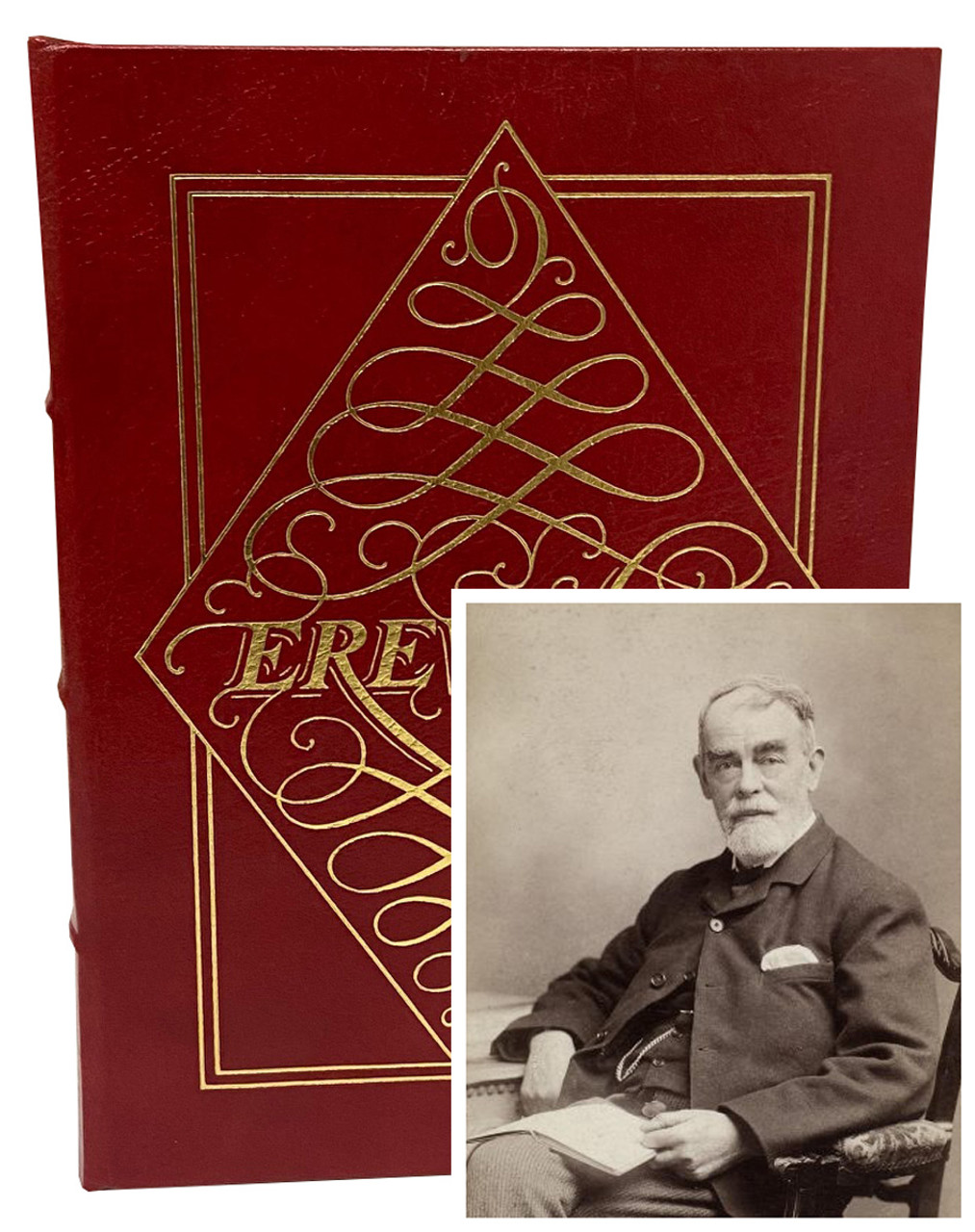 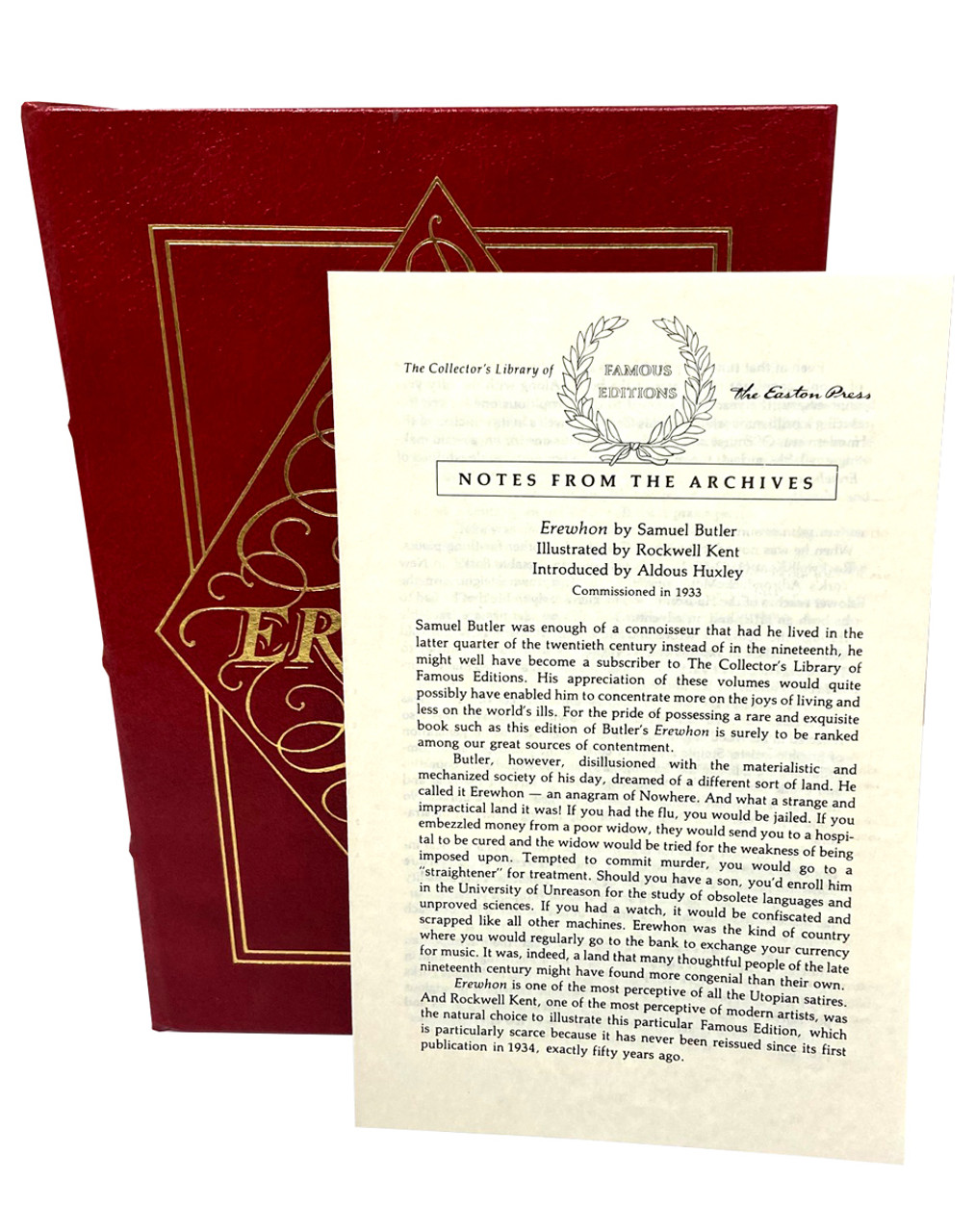 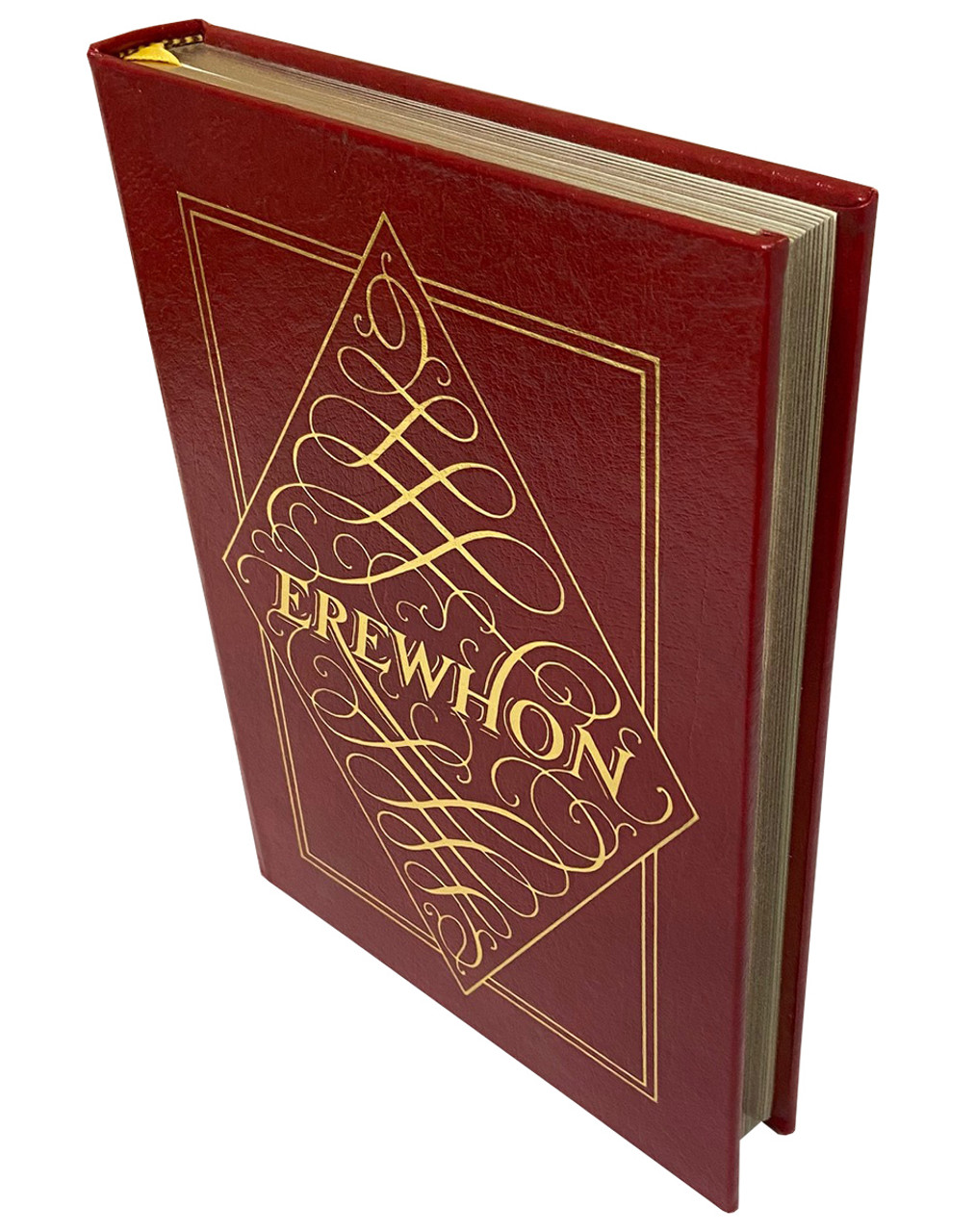 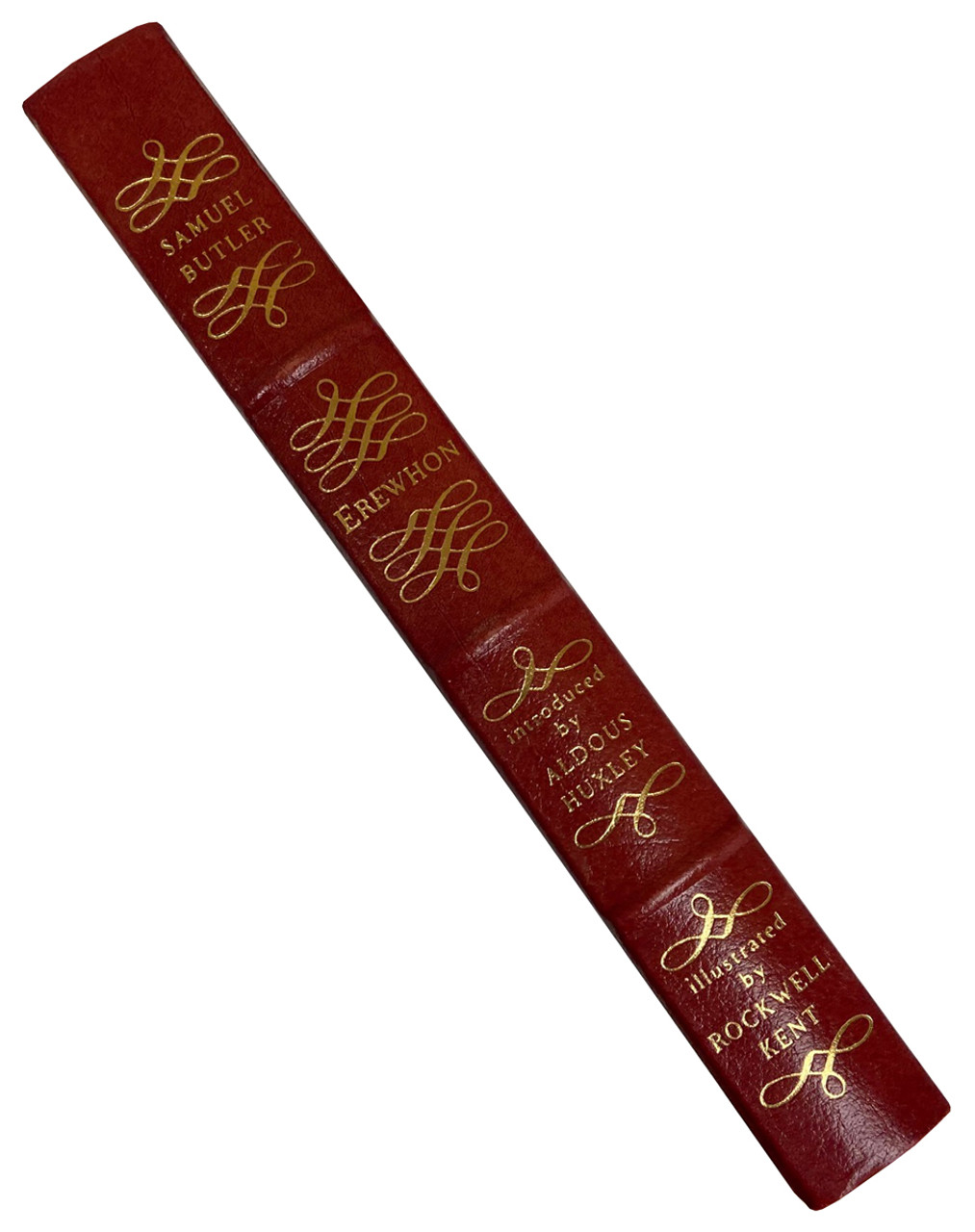 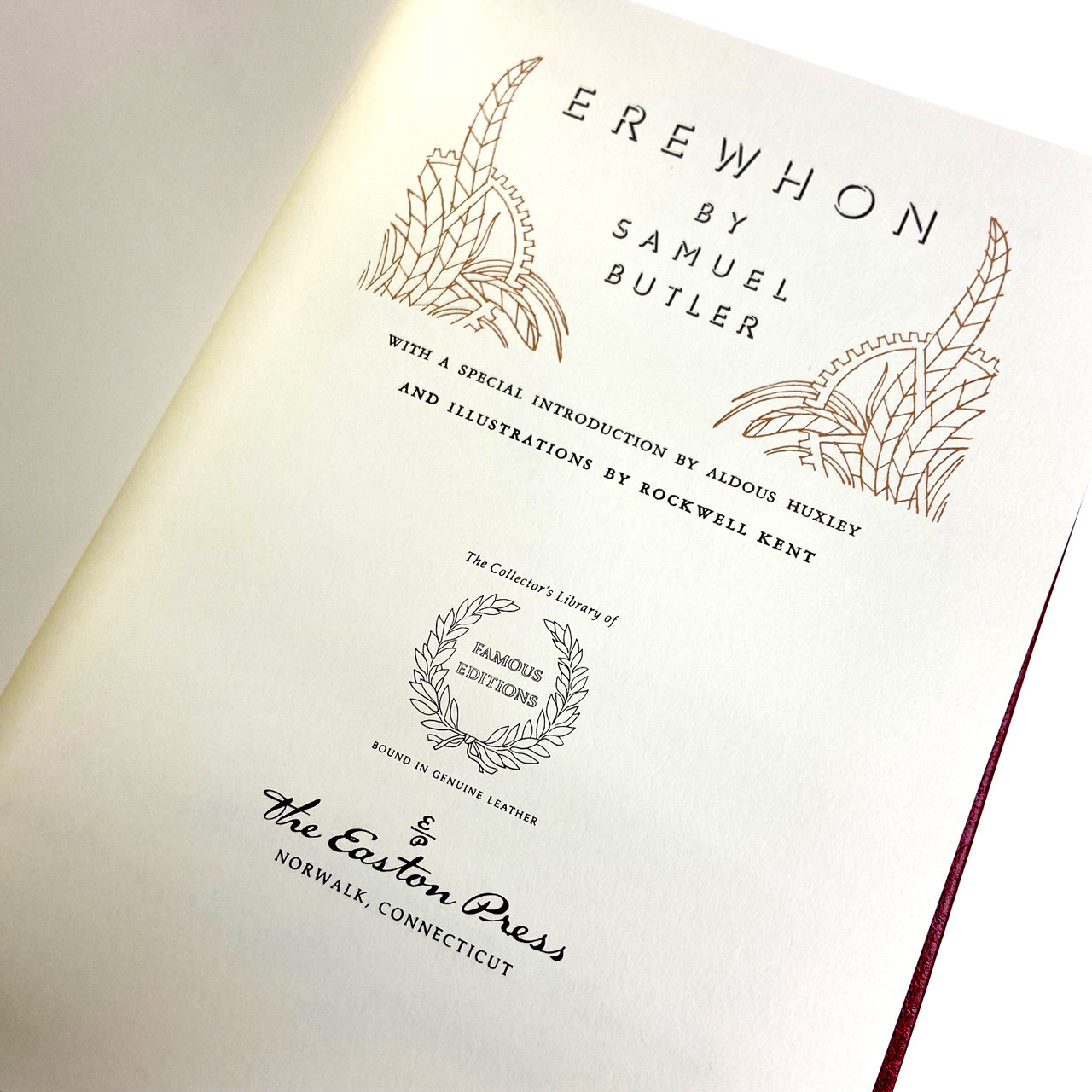 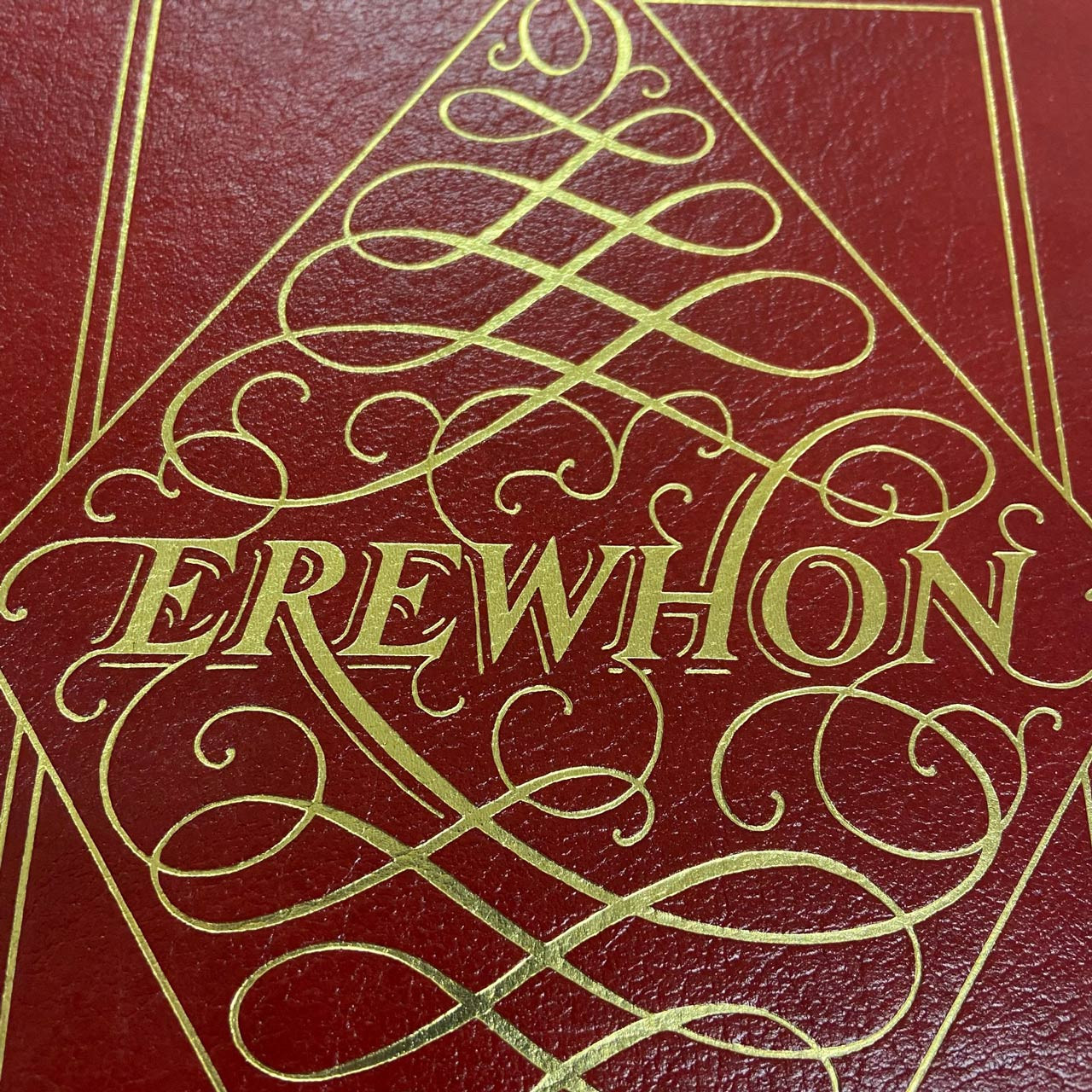 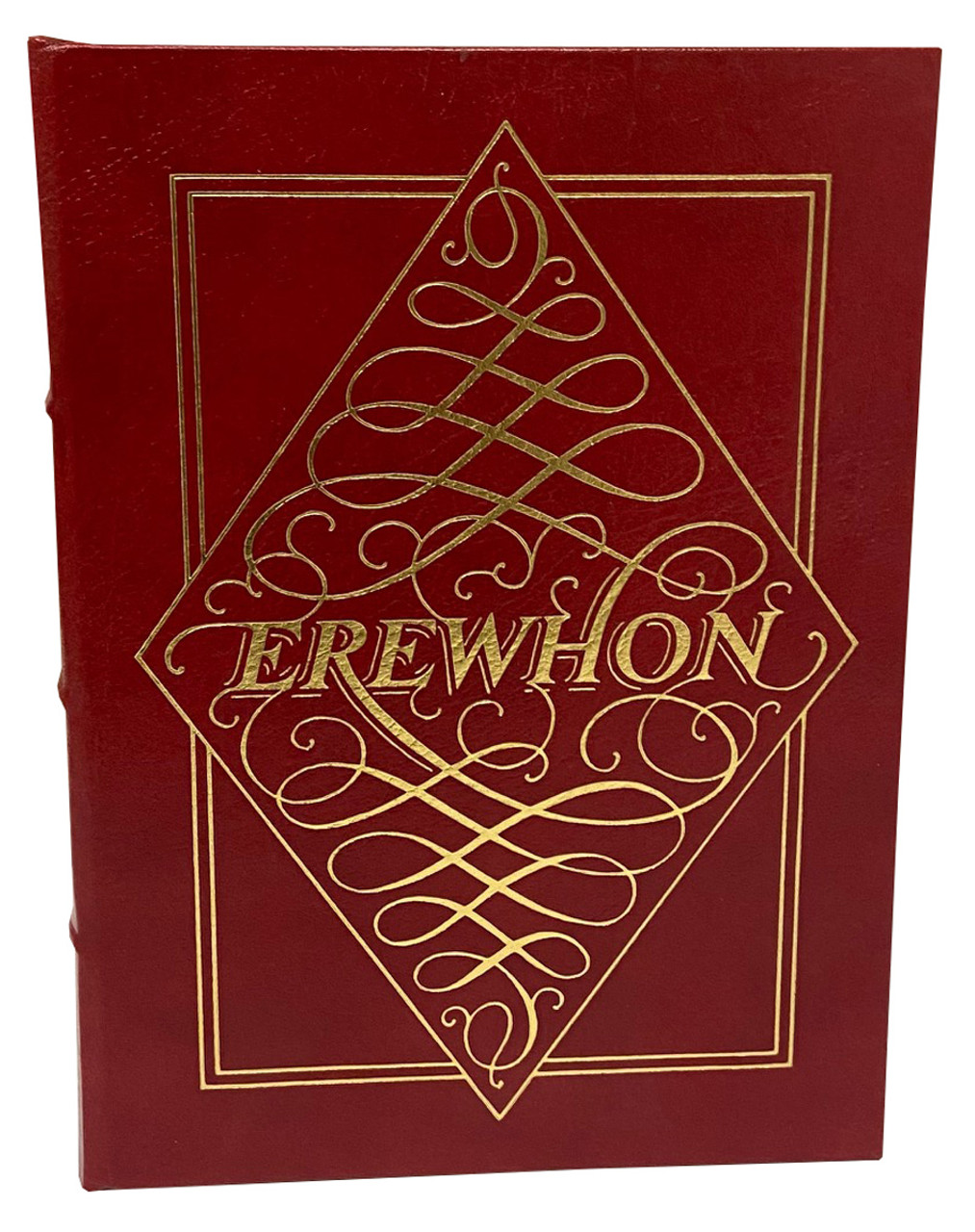 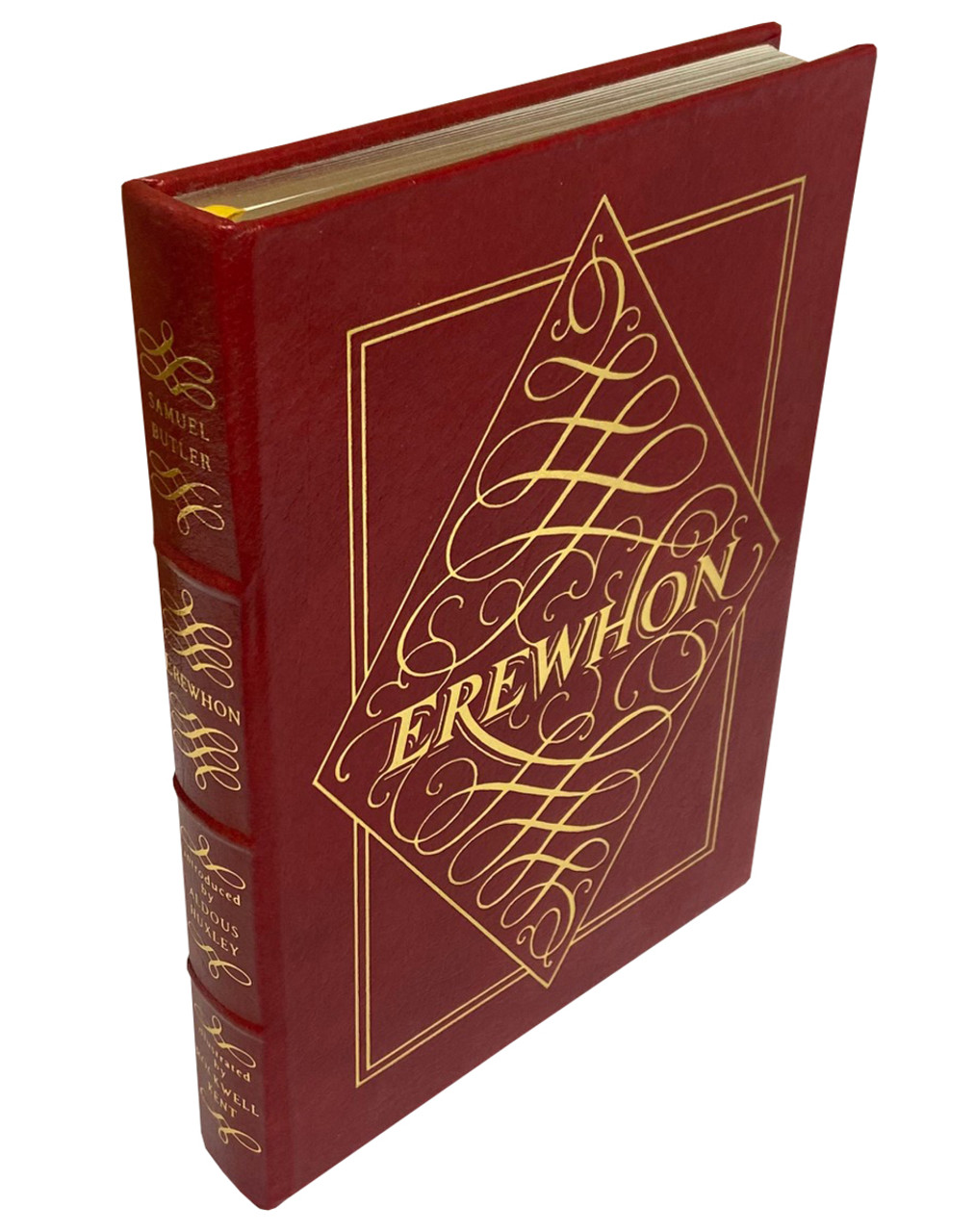 Easton Press, Norwalk, CT. Samuel Butler "Erewhon". Limited Edition. Leather Bound. Beautifully illustrated and bound in full genuine leather. A rare collector's edition that is hard to find, especially in this very fine condition. One of the most celebrated works of popular literature by a historical writer. A true classic for your home library or office. Includes extra unattached Ex-Libris bookplate for your own personalization.

Erewhon: or, Over the Range is a novel by Samuel Butler which was first published anonymously in 1872, set in a fictional country discovered and explored by the protagonist. The book is a satire on Victorian society.

The first few chapters of the novel dealing with the discovery of Erewhon are in fact based on Butler's own experiences in New Zealand, where, as a young man, he worked as a sheep farmer on Mesopotamia Station for about four years (1860–64), and explored parts of the interior of the South Island and which he wrote about in his A First Year in Canterbury Settlement (1863).

The novel is one of the first to explore ideas of artificial intelligence, as influenced by Darwin's recently published On the Origin of Species (1859) and the machines developed out of the Industrial Revolution (late 18th to early 19th centuries). Specifically, it concerns itself, in the three-chapter "Book of the Machines", with the potentially dangerous ideas of machine consciousness and self-replicating machines.

Samuel Butler (1835 - 1902) was a Victorian novelist who wrote in many genres. The Way of All Flesh and Erewhon are his most famous novels. Besides fiction Butler also wrote on evolution, Christian orthodoxy, Italian art, literary history and translated the Illiad and The Odyssey. Erewhon is a utopian satire of Victorian England published in 1872. The title is the name of a fictional country and it is also the word "nowhere" spelled backwards. The beginning of the book deals with the discovery of Erewhon, which is based on Butlers time in New Zealand where he worked on a sheep ranch for four years. The novel satirizes religion, anthropocentrism, and criminal punishment.

Erewhon: or, Over the Range is a novel by Samuel Butler, published anonymously in 1872. In the novel, it is not revealed in which part of the world Erewhon is, but it is clear that it is a fictional country.

The first few chapters of the novel, dealing with the discovery of Erewhon, are in fact based on Butler's own experiences in New Zealand where, as a young man, he worked as a sheep farmer for about four years (18601864) and explored parts of the interior of the South Island. One of the country's largest sheep stations, located near where Butler lived, is named "Erewhon" in his honor.

In the preface to the first edition of his book, Butler specified:

The author wishes it to be understood that Erewhon is pronounced as a word of three syllables, all short  thus, E-re-whon.

Nevertheless, the word is occasionally pronounced with two syllables as 'air - one'.

Enhance your library with this beautiful leather bound collector's edition from Easton Press.   Illustrated by Arthur Szyk. Collector's Library of Famous Editions Notes From The Archives The...