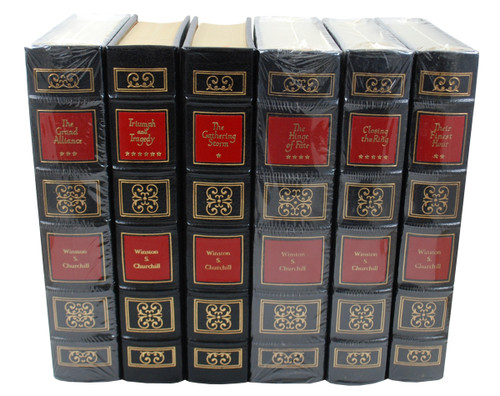 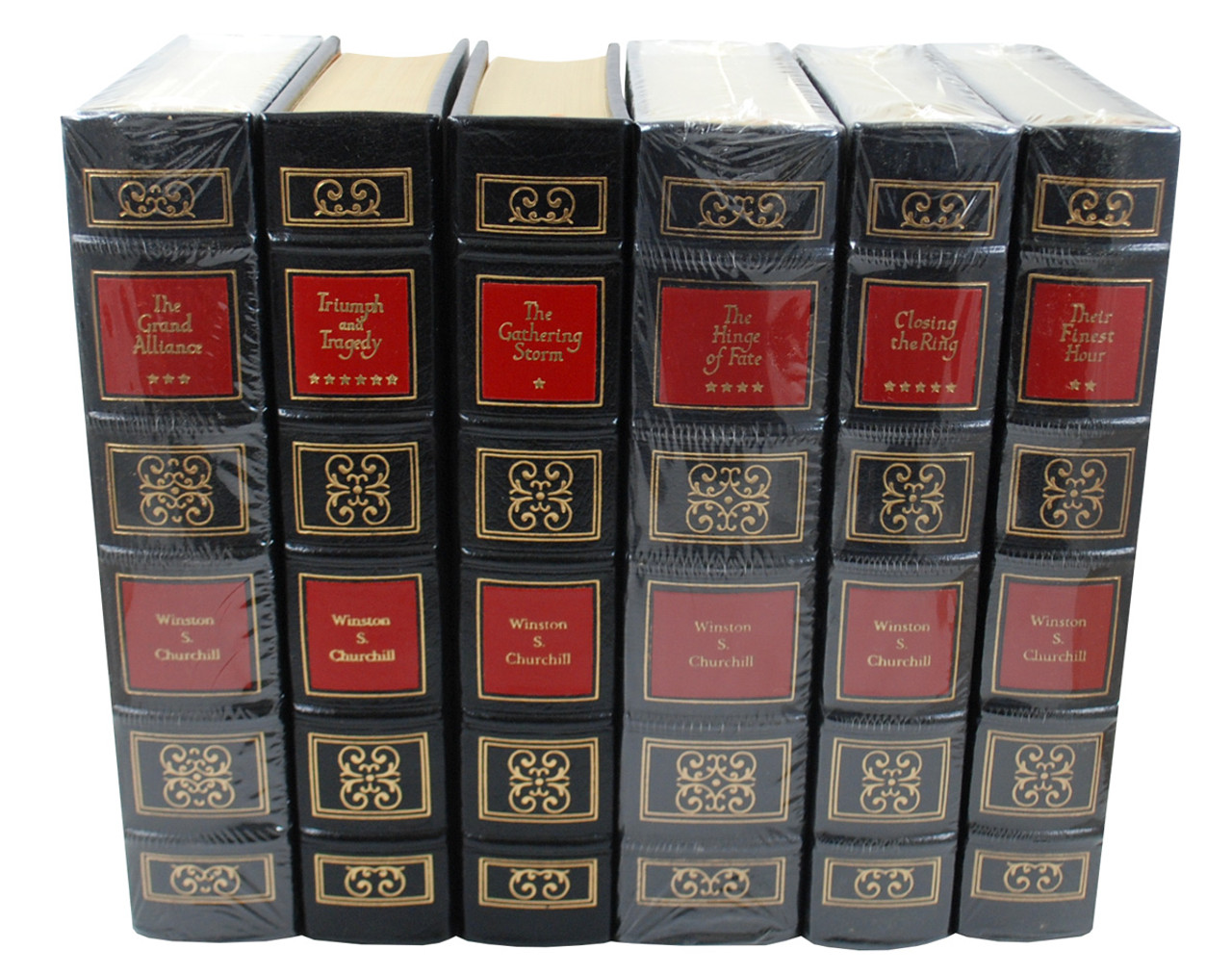 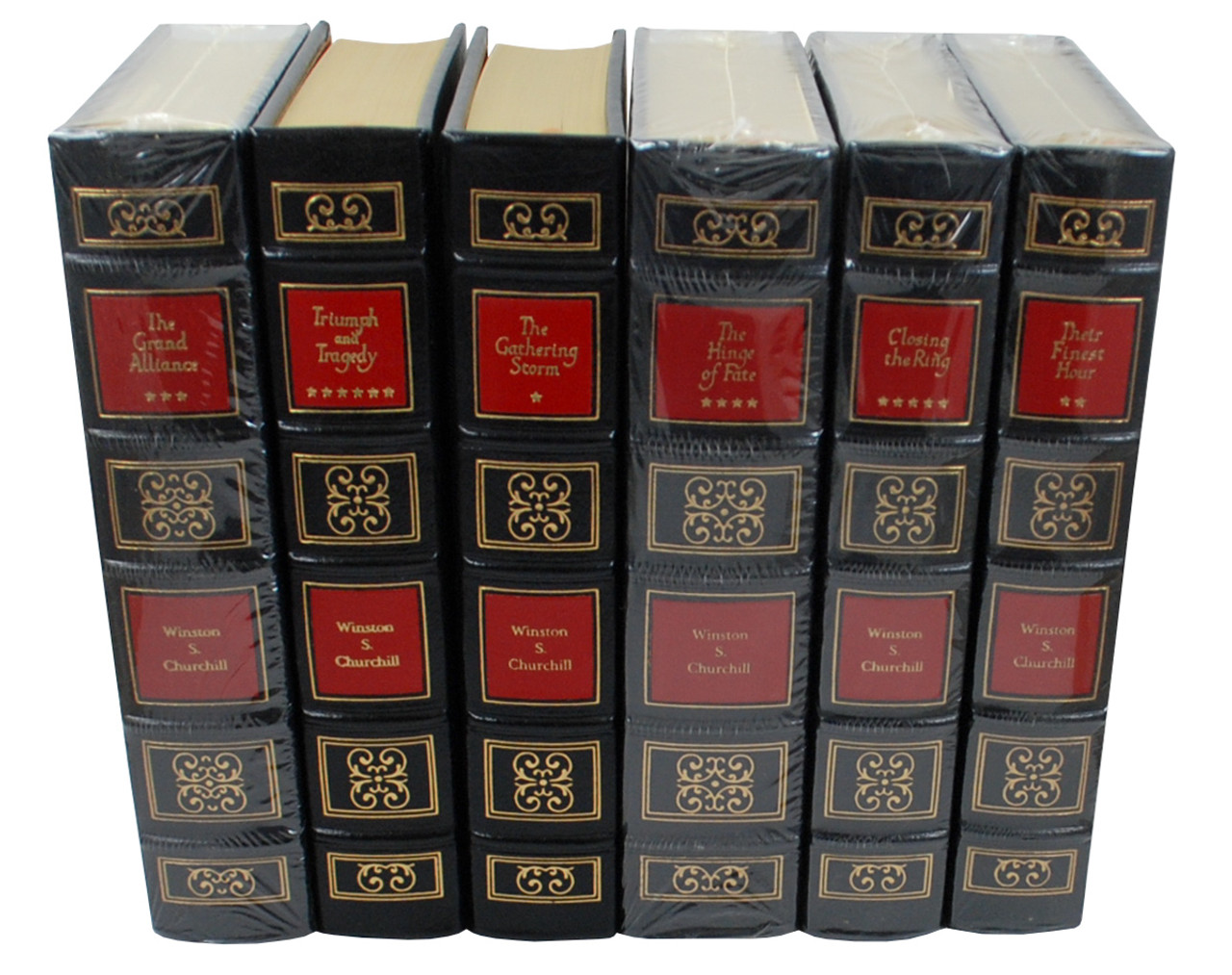 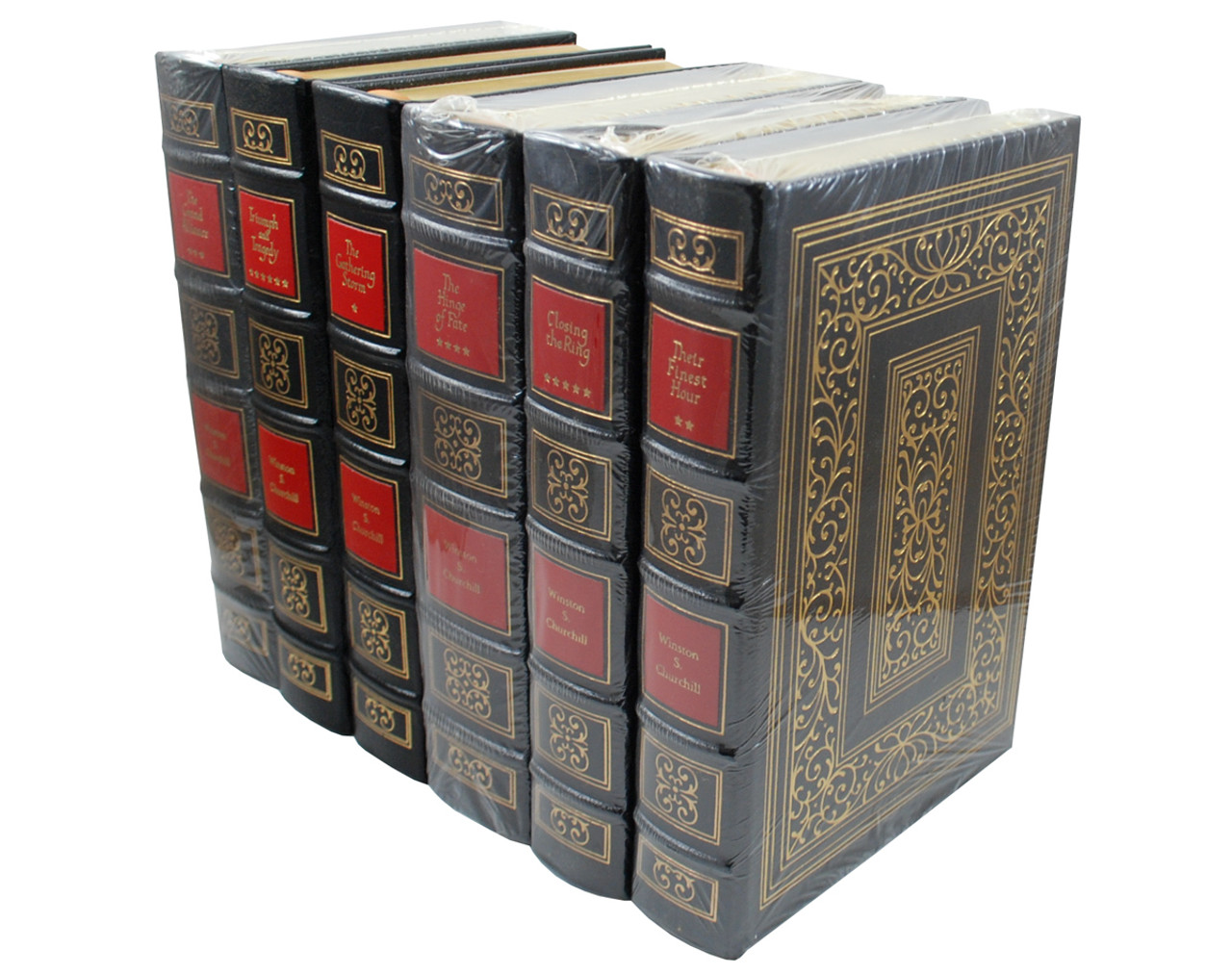 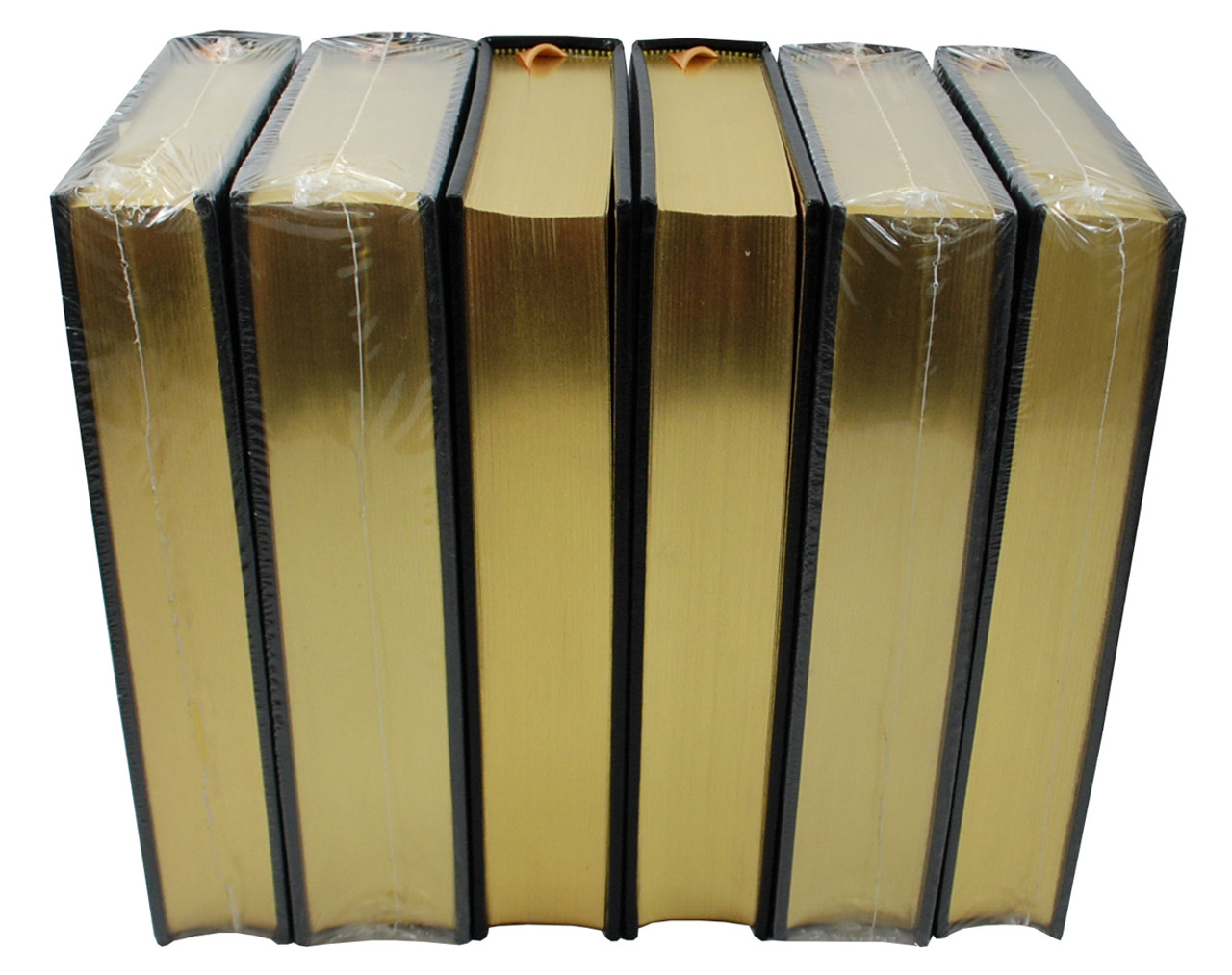 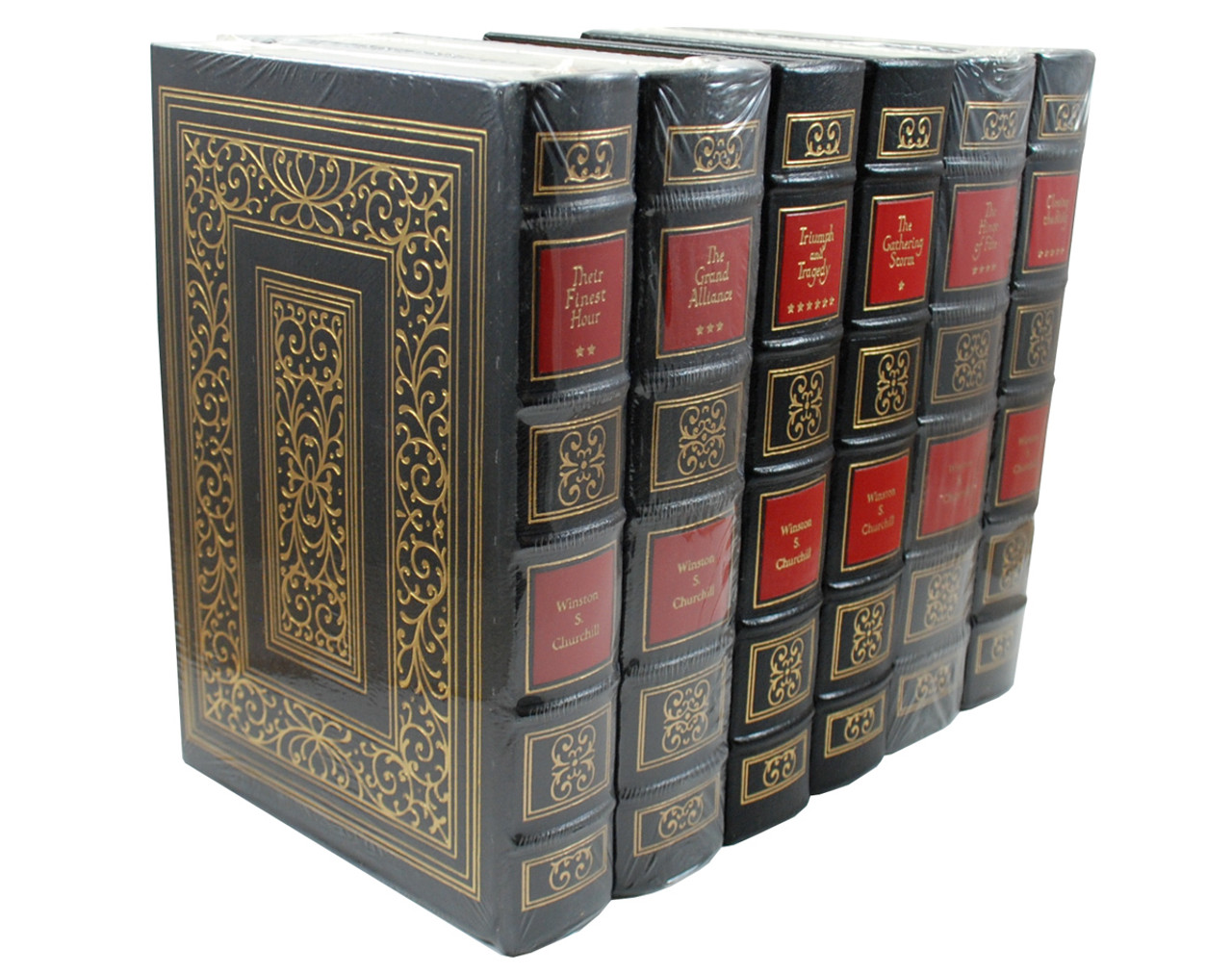 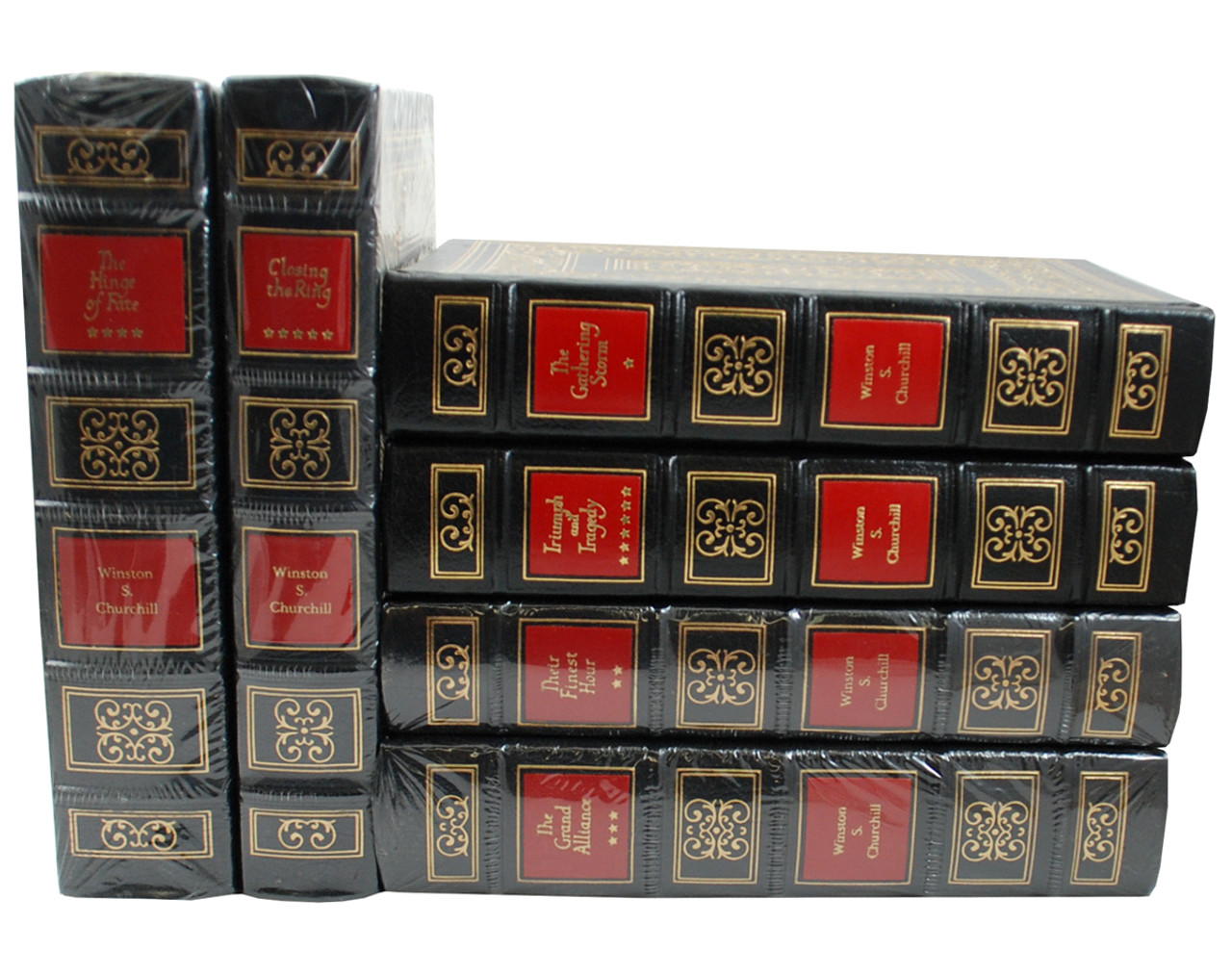 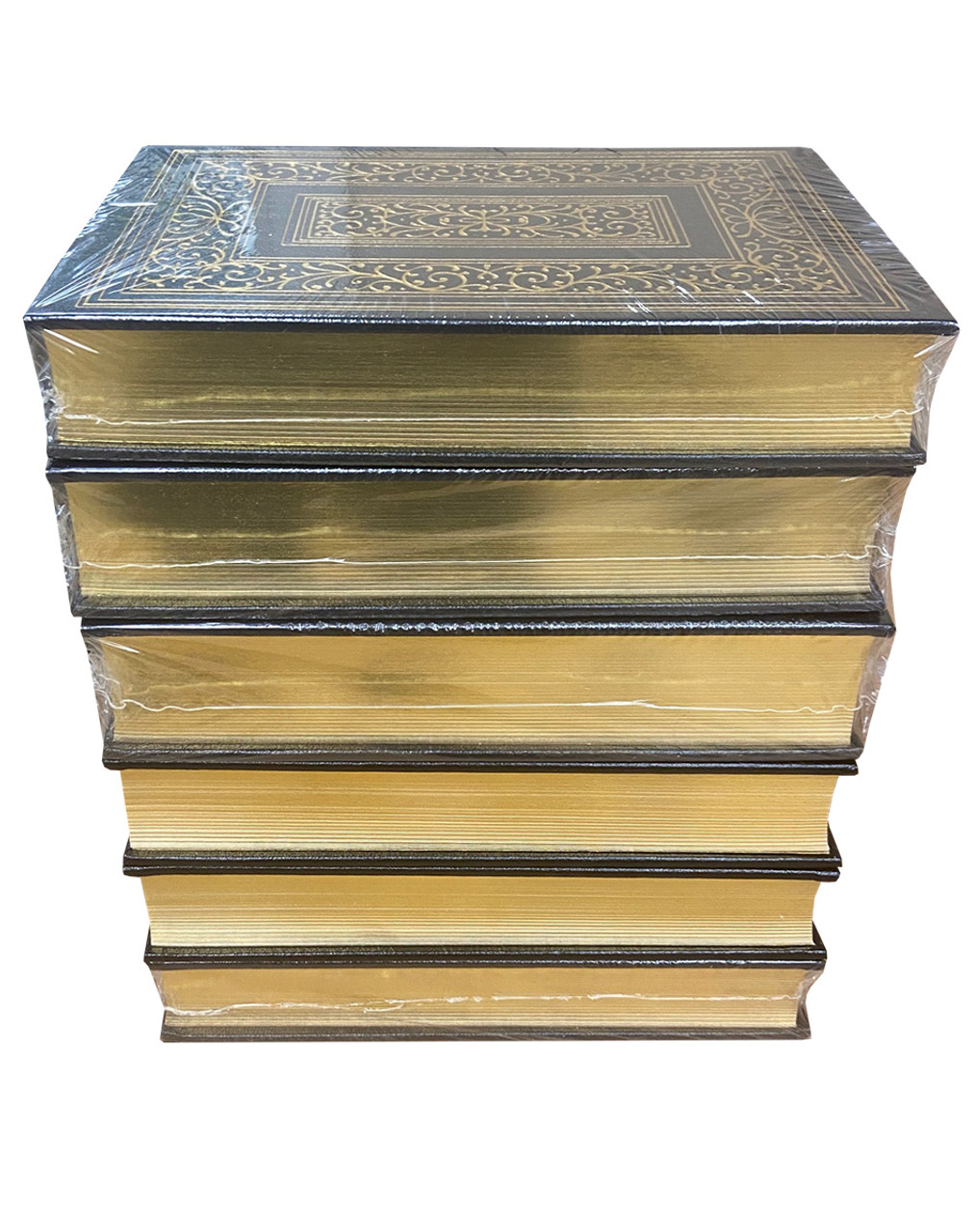 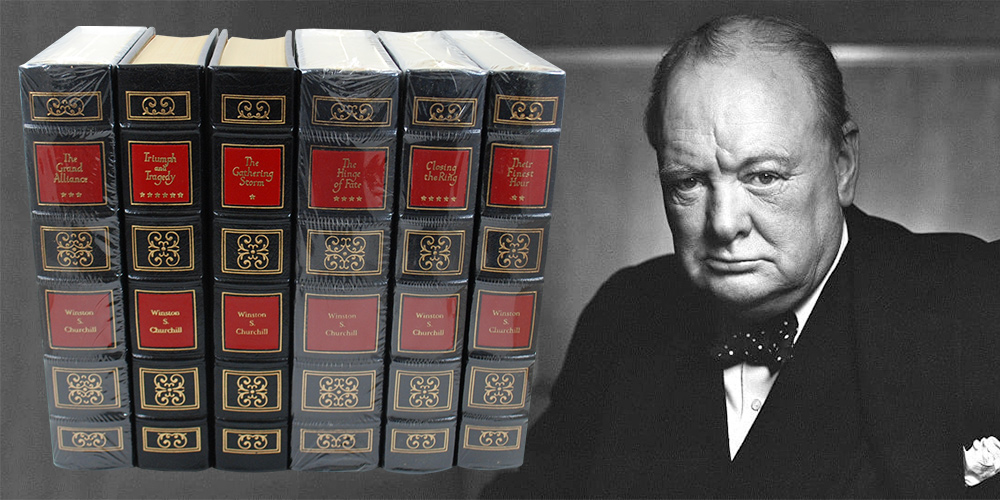 This is Churchill's eyewitness account of this crucial event is history at its compelling best. Rare and out of print. This magnificent collection includes numerous maps and photos. The title & author labels on the spines are in red. This set also includes six extra Ex-Libris bookplates for your own personalization.

Easton Press. Copyright 1989. Winston Churchill "The Second World War" Limited Edition 6-volume complete matching set. Each volume in this set is luxuriously bound in full genuine leather. Six books that can be treasured from generations to come. A unique gift for someone special. Four of the volumes are still sealed in the original shrink-wrap.

The list of volumes included in this set as follows:

Sir Winston Leonard Spencer Churchill KG, OM, CH, TD, FRS, PC (30 November 1874 - 24 January 1965) was a British politician known chiefly for his leadership of the United Kingdom during World War II. He served as Prime Minister from 1940 to 1945 and again from 1951 to 1955. A noted statesman and orator, Churchill was also an officer in the British Army, historian, writer, and artist. He is the only British Prime Minister to have received the Nobel Prize in Literature and the second person to be made an Honorary Citizen of the United States.

During his army career, Churchill saw action in India, in the Sudan and the Second Boer War. He gained fame and notoriety as a war correspondent and through contemporary books he wrote describing the campaigns. He also served briefly in the British Army on the Western Front in World War I, commanding the 6th Battalion of the Royal Scots Fusiliers.

The first in Winston Churchill's monumental six-volume account of the struggle between the Allied Powers in Europe against Germany and the Axis during World War II.

Told from the unique viewpoint of the former British prime minister, The Gathering Storm is also the story of one nation's heroic role in the fight against tyranny.

Having learned a lesson at Munich they would never forget, the British refused to make peace with Hitler, defying him even after France had fallen and it seemed as though the Nazis were unstoppable. What lends this work its tension and power is Churchill’s inclusion of primary source material. We are presented with not only Churchill’s retrospective analysis of the war, but also memos, letters, orders, speeches, and telegrams, day-by-day accounts of reactions as the drama intensifies. We listen as strategies and counterstrategies unfold in response to Hitler’s conquest of Europe, planned invasion of England, and assault on Russia. Together they give a mesmerizing account of the crucial decisions made as the fate of the world hangs in the balance.

The Gathering Storm covers the Treaty of Versailles, the rise of Adolf Hitler, the capitulation of Munich, and the entry of Britain into the war. This book makes clear Churchill’s feeling that the Second World War was a largely senseless but unavoidable conflict—and shows why Churchill earned the Nobel Prize in Literature in 1953, in part because of this awe-inspiring work.

One of the most fascinating works of history ever written, Winston Churchill's monumental book The Second World War is a six-volume account of the struggle of the Allied powers in Europe against Germany and the Axis. Recounted through the eyes of British Prime Minister Winston Churchill, the Second World War is also the story of one nation's singular, heroic role in the fight against tyranny. Here you will find pride and patriotism in Churchill's dramatic account and with reason--having learned a lesson at Munich that they would never forget, the British refused to make peace with Hitler, defying him even after France had fallen and it seemed as though the Nazis were an unstoppable force.

What lends this work its tension is Churchill’s inclusion of primary source material. We hear Churchill’s retrospective analysis of the war, but we are also presented with memos, letters, orders, speeches, and telegrams that give day-by-day accounts of the reactions as the drama unfolds. We listen as strategies and counter-strategies unfold in response to Hitler’s conquest of Europe, his planned invasion of England, and his assault on Russia. All contrive to give a mesmerizing account of the crucial decisions that must be made as the fate of the world hangs in the balance.

The Grand Alliance describes the end of an extraordinary period in British military history in which Britain stood alone against Germany. Two crucial events brought an end of Britain's isolation. First is Hitler's decision to attack the Soviet Union, opening up a battle front in the East and forcing Stalin to look to the British for support. The second event is the bombing of Pearl Harbor. U.S. support had long been crucial to the British war effort, and Churchill documents his efforts to draw the Americans to aid, including correspondence with President Roosevelt.

The Hinge of Fate

The Hinge of Fate is the dramatic account of the Allies' changing fortunes.In the first half of the book, Churchill describes the fearful period in which the Germans threaten to overwhelm the Red Army, Rommel dominates the war in the desert, and Singapore falls to the Japanese. In the span of just a few months, the Allies begin to turn the tide, achieving decisive victories at Midway and Guadalcanal, and repulsing the Germans at Stalingrad. As confidence builds, the Allies begin to gain ground against the Axis powers.

Churchill shows in Volume Five, Closing the Ring, the Allied forces going on the offensive. Mussolini falls, Hitler is besieged on three sides, and the Japanese find it near impossible to maintain a grip on the territories they had recently overtaken. Stalin, Churchill, and Roosevelt work towards keeping their uneasy partnership moving in concert and much of this volume is dedicated to describing the intricate negotiations that went on to sustain this partnership toward one single end goal.

In Triumph and Tragedy, Churchill provides in dramatic detail the endgame of the war and the uneasy meetings between himself, Stalin, and Truman to discuss plans for rebuilding Europe in the aftermath of devastation, beginning with invasion of Normandy, the heroic landing of the Allied armies and the most remarkable amphibious operation in military history. Churchill watches as the uneasy coalition that had knit themselves together begins to fray at Potsdam, foreshadowing the birth of the Cold War.

Four of the volumes are VERY FINE, sealed in the original shrink-wrap without any flaws. Two volumes are Very Fine-, with very minor mark to corner of page edges. Unread books with square and tight spines. No attached bookplates or indication of any removed. Photos of actual set.