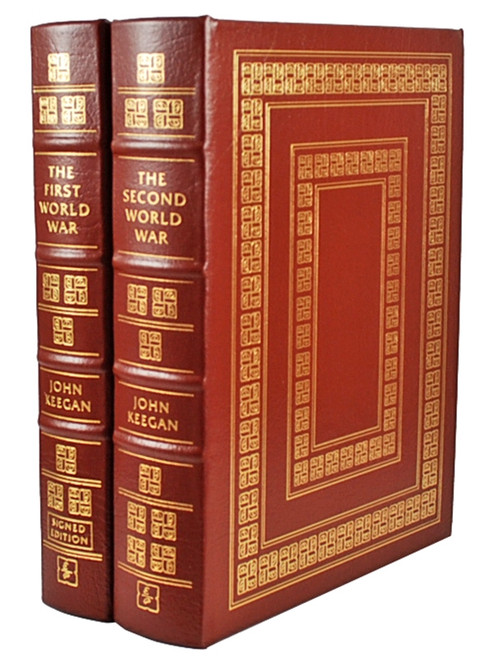 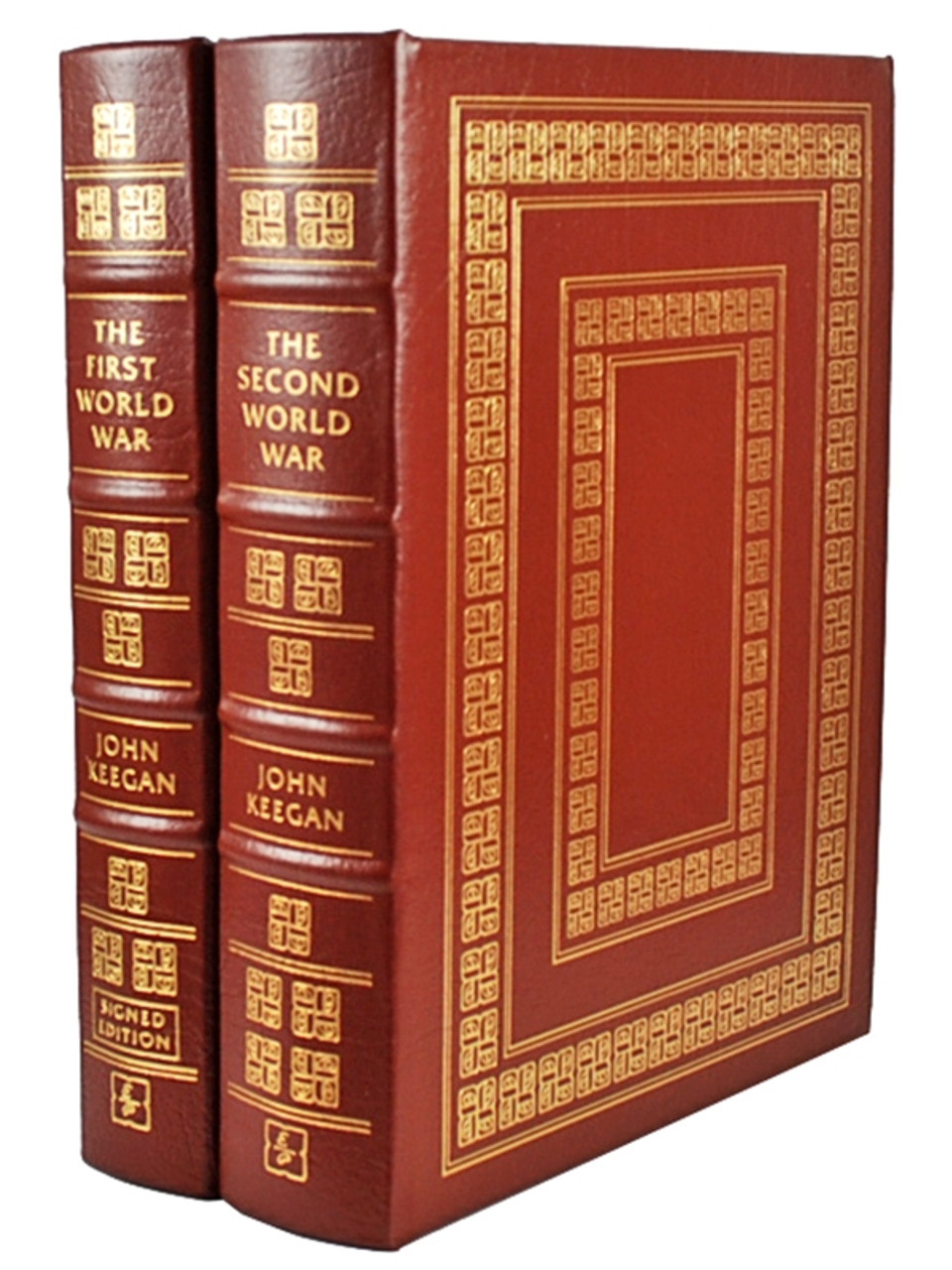 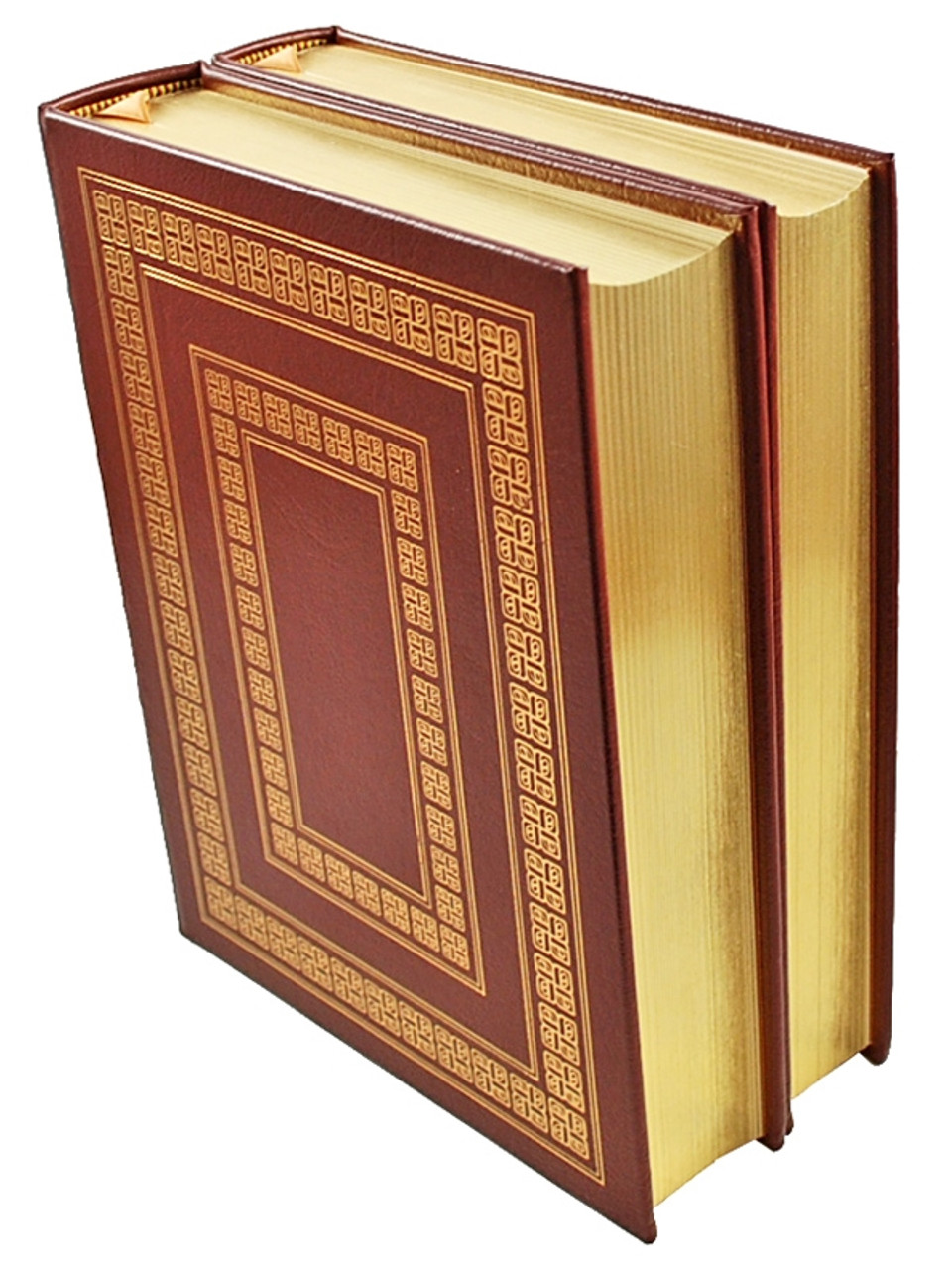 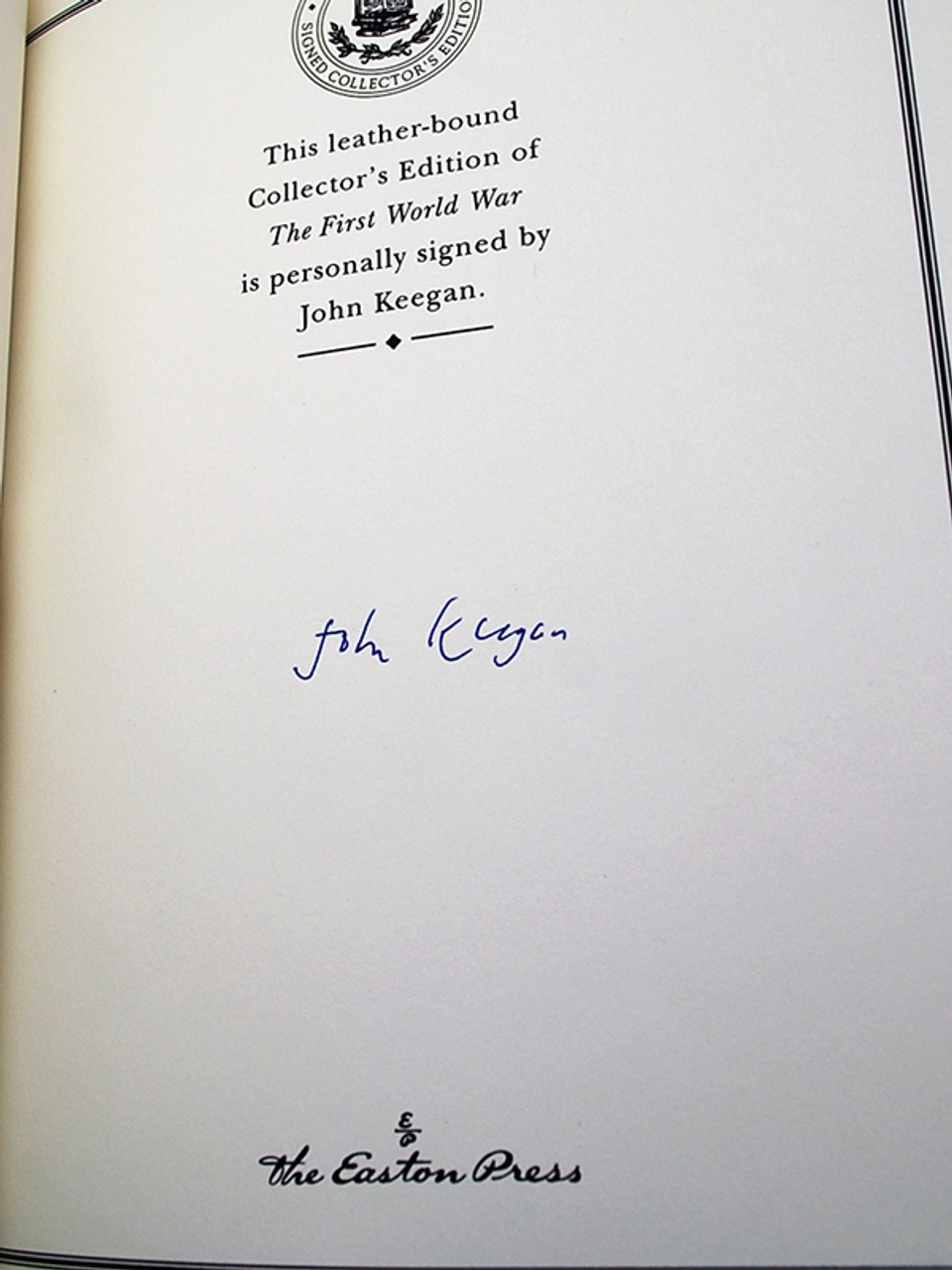 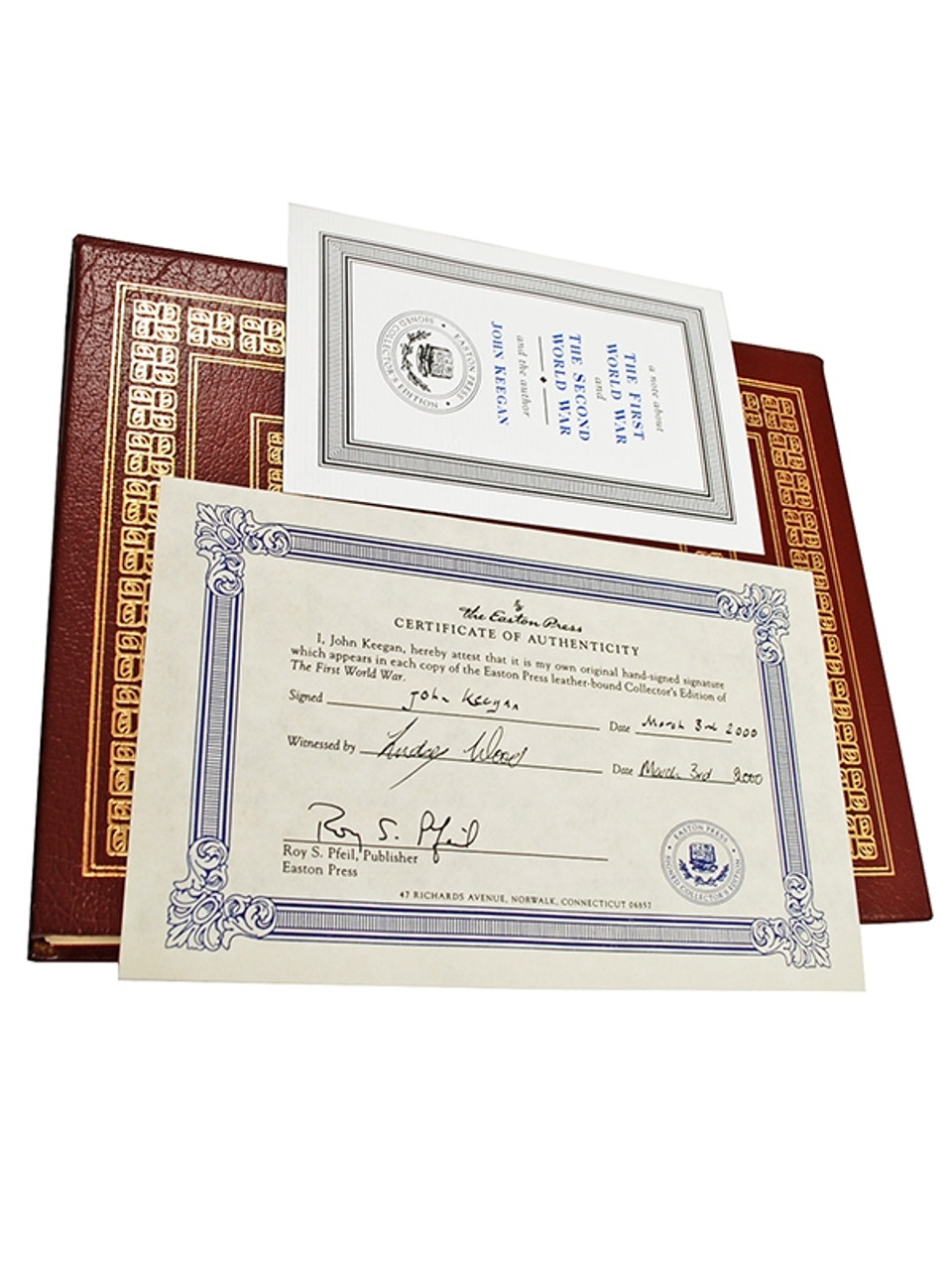 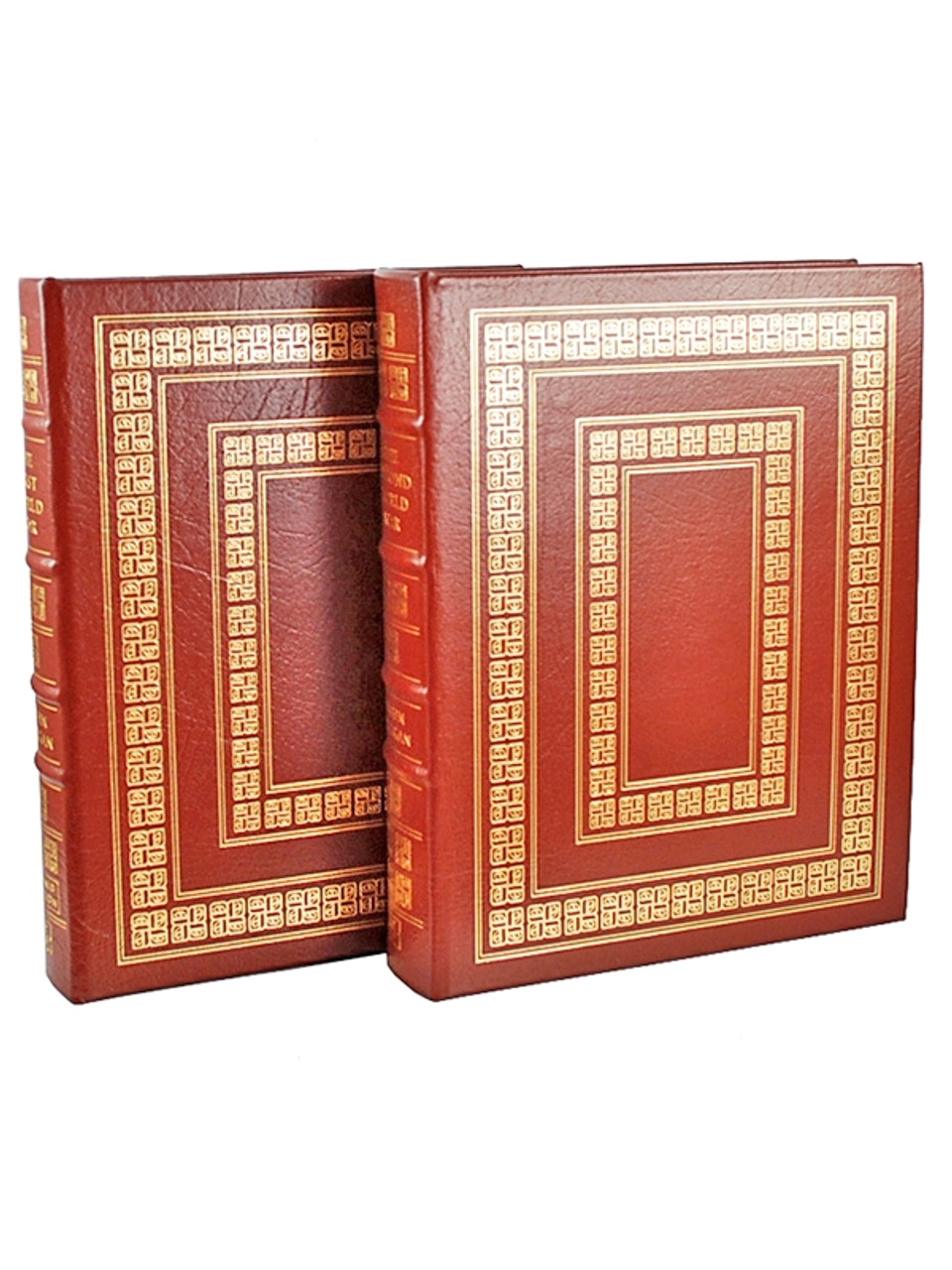 Easton Press. Norwalk, CT. 2000. John Keegan "The First World War" and "The Second World War". Limited Collector's Edition. A matching set that would make an excellent addition to the library of any serious collector. Bound in full genuine leather with elegant gold detailing."The First World War" is a signed limited edition that has been personally signed by John Keegan directly onto the special title page. Includes the original COA and collector's notes from the publisher.

Sir John Desmond Patrick Keegan OBE FRSL (15 May 1934 – 2 August 2012) was a British military historian, lecturer, writer and journalist. He was the author of many published works on the nature of combat between the 14th and 21st centuries concerning land, air, maritime, and intelligence warfare, as well as the psychology of battle.

The First World War created the modern world. A conflict of unprecedented ferocity, it abruptly ended the relative peace and prosperity of the Victorian era, unleashing such demons of the twentieth century as mechanized warfare and mass death. It also helped to usher in the ideas that have shaped our times--modernism in the arts, new approaches to psychology and medicine, radical thoughts about economics and society--and in so doing shattered the faith in rationalism and liberalism that had prevailed in Europe since the Enlightenment. With The First World War, John Keegan, one of our most eminent military historians, fulfills a lifelong ambition to write the definitive account of the Great War for our generation.

Probing the mystery of how a civilization at the height of its achievement could have propelled itself into such a ruinous conflict, Keegan takes us behind the scenes of the negotiations among Europe's crowned heads (all of them related to one another by blood) and ministers, and their doomed efforts to defuse the crisis. He reveals how, by an astonishing failure of diplomacy and communication, a bilateral dispute grew to engulf an entire continent.

But the heart of Keegan's superb narrative is, of course, his analysis of the military conflict. With unequalled authority and insight, he recreates the nightmarish engagements whose names have become legend--Verdun, the Somme and Gallipoli among them--and sheds new light on the strategies and tactics employed, particularly the contributions of geography and technology. No less central to Keegan's account is the human aspect. He acquaints us with the thoughts of the intriguing personalities who oversaw the tragically unnecessary catastrophe--from heads of state like Russia's hapless tsar, Nicholas II, to renowned warmakers such as Haig, Hindenburg and Joffre. But Keegan reserves his most affecting personal sympathy for those whose individual efforts history has not recorded--"the anonymous millions, indistinguishably drab, undifferentially deprived of any scrap of the glories that by tradition made the life of the man-at-arms tolerable."

By the end of the war, three great empires--the Austro-Hungarian, the Russian and the Ottoman--had collapsed. But as Keegan shows, the devastation ex-tended over the entirety of Europe, and still profoundly informs the politics and culture of the continent today. His brilliant, panoramic account of this vast and terrible conflict is destined to take its place among the classics of world history.

Praised as “the best military historian of our generation” by Tom Clancy, John Keegan here reconsiders his masterful study of World War II, The Second World War, with a new foreword. Keegan examines each theater of the war, focusing on five crucial battles and offering new insights into the distinctive methods and motivations of modern warfare. In eloquent, perceptive analyses of the airborne battle of Crete, the carrier battle of Midway, the tank battle of Falaise, the city battle of Berlin, and the amphibious battle of Okinawa, Keegan illuminates the strategic dilemmas faced by the leaders and the consequences of their decisions on the fighting men and the course of the war as a whole.

Very Near Fine condition for both volumes. There is a miniscule amount of gilt loss on one corner of the page edges. Each book is unread, and a wonderful bright clean copy with square and tight binding. No bumped corners and free of any marks, writings or stamps. No bookplates attached or indication of any removed. A beautiful set for the collector that would also make a unique gift idea.