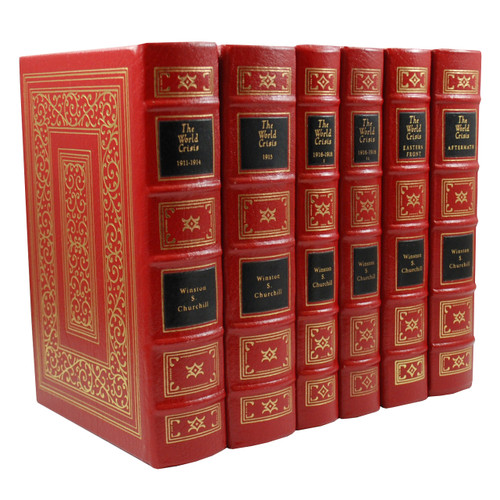 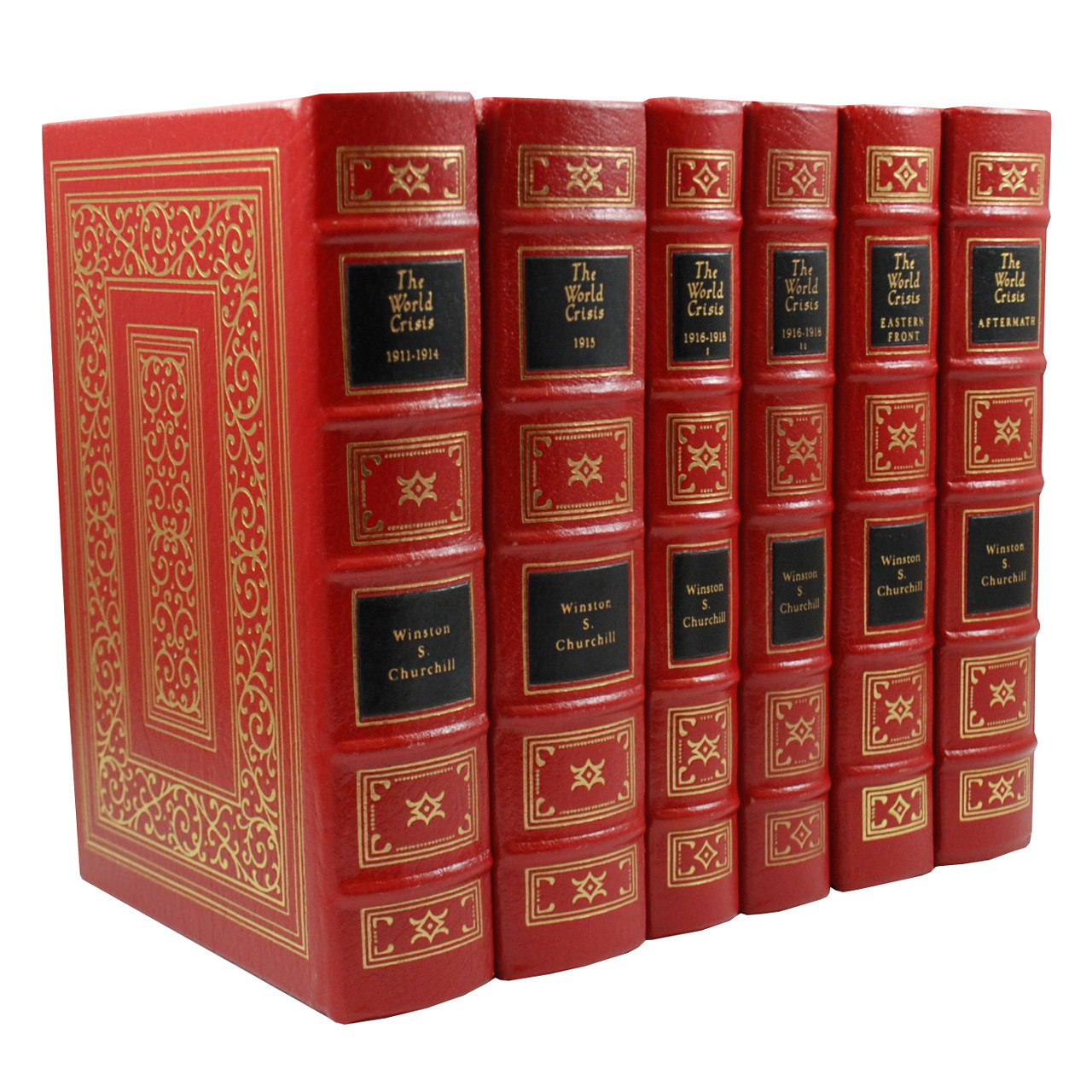 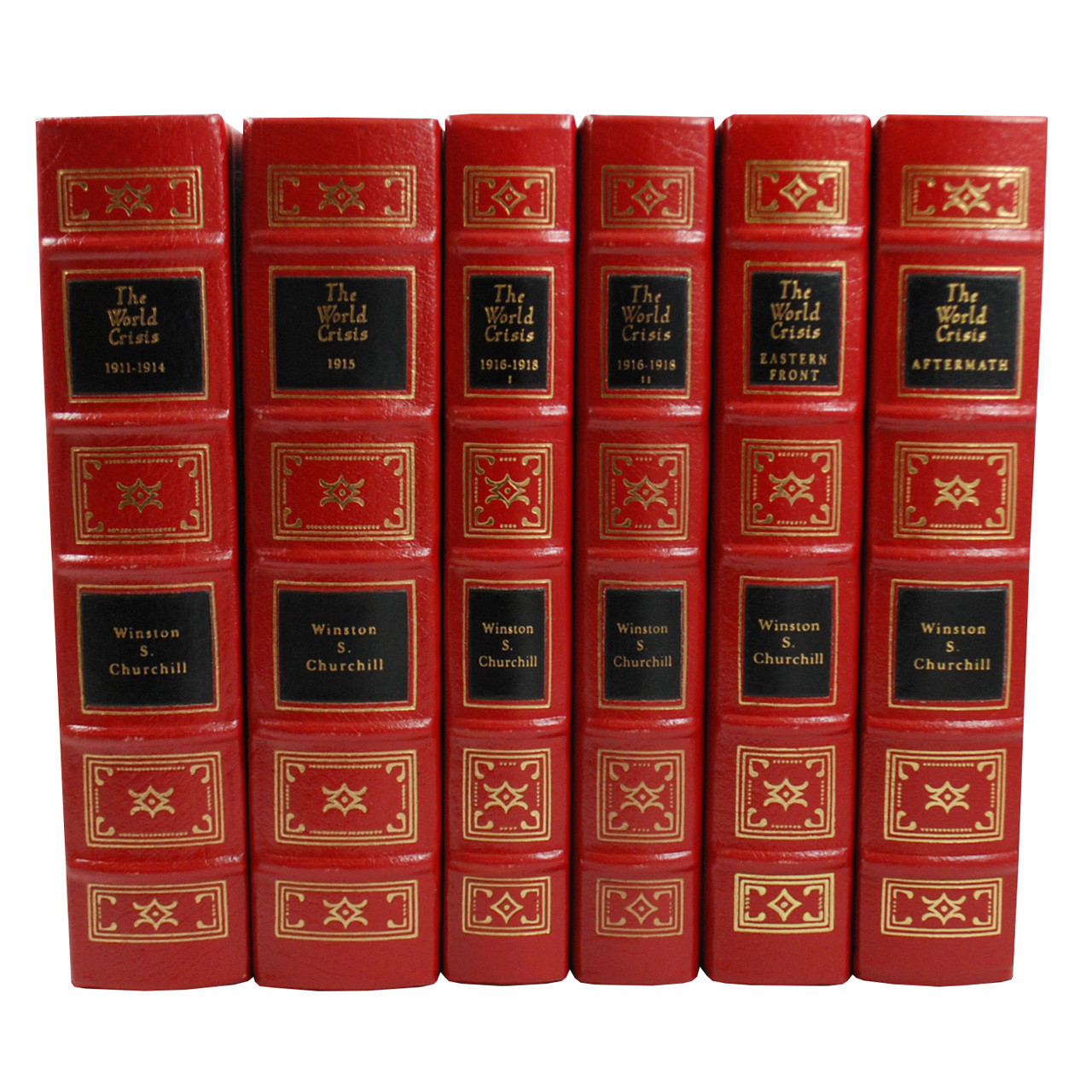 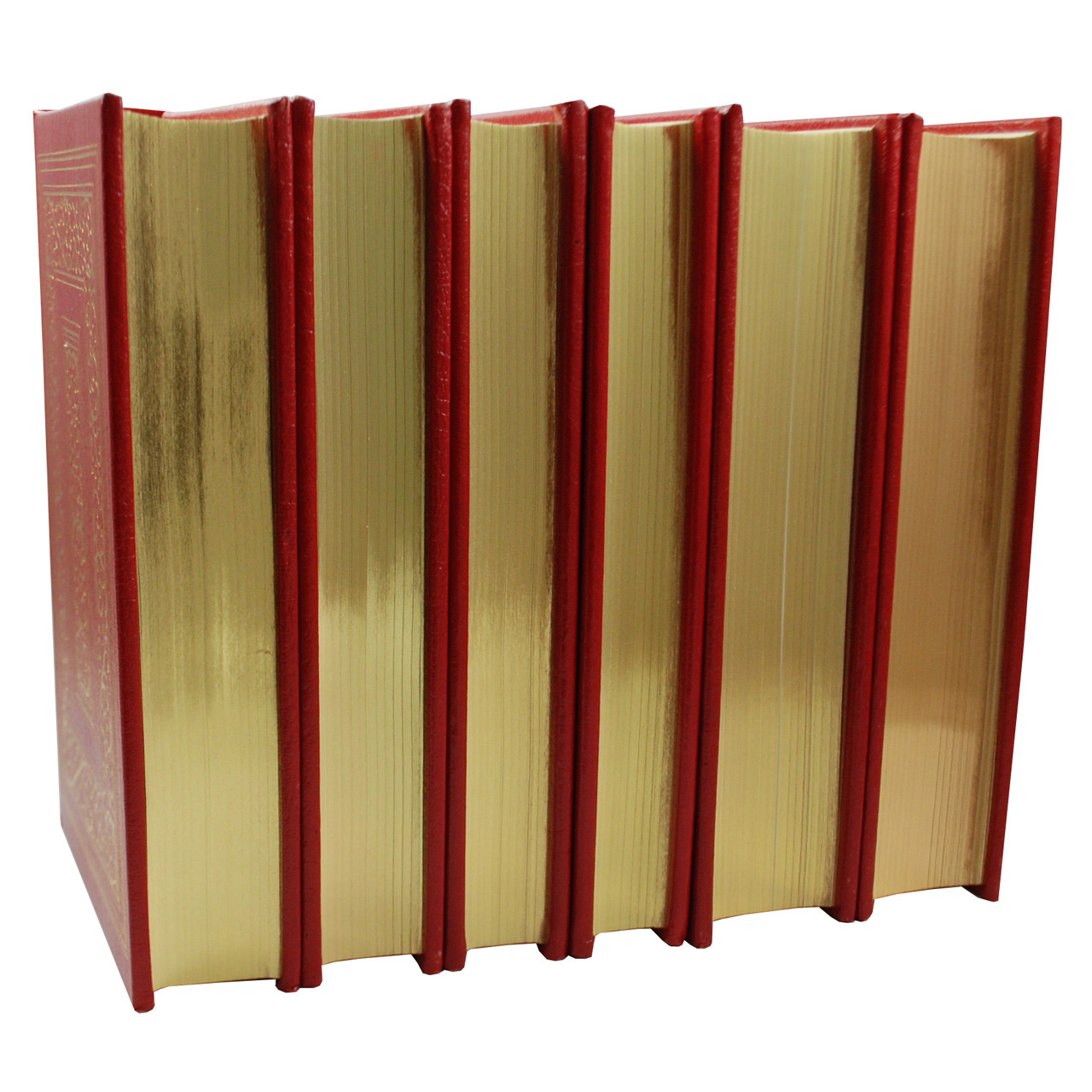 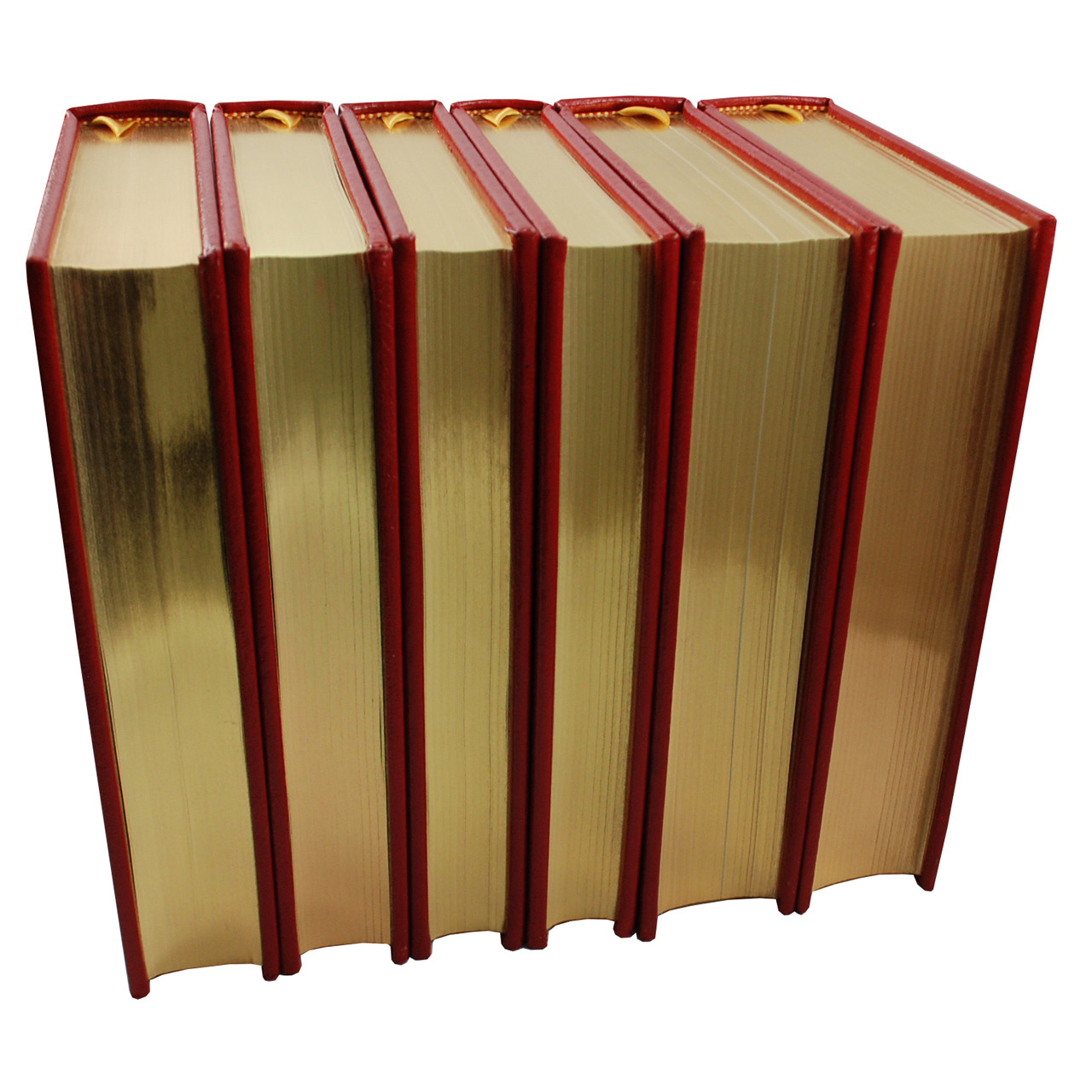 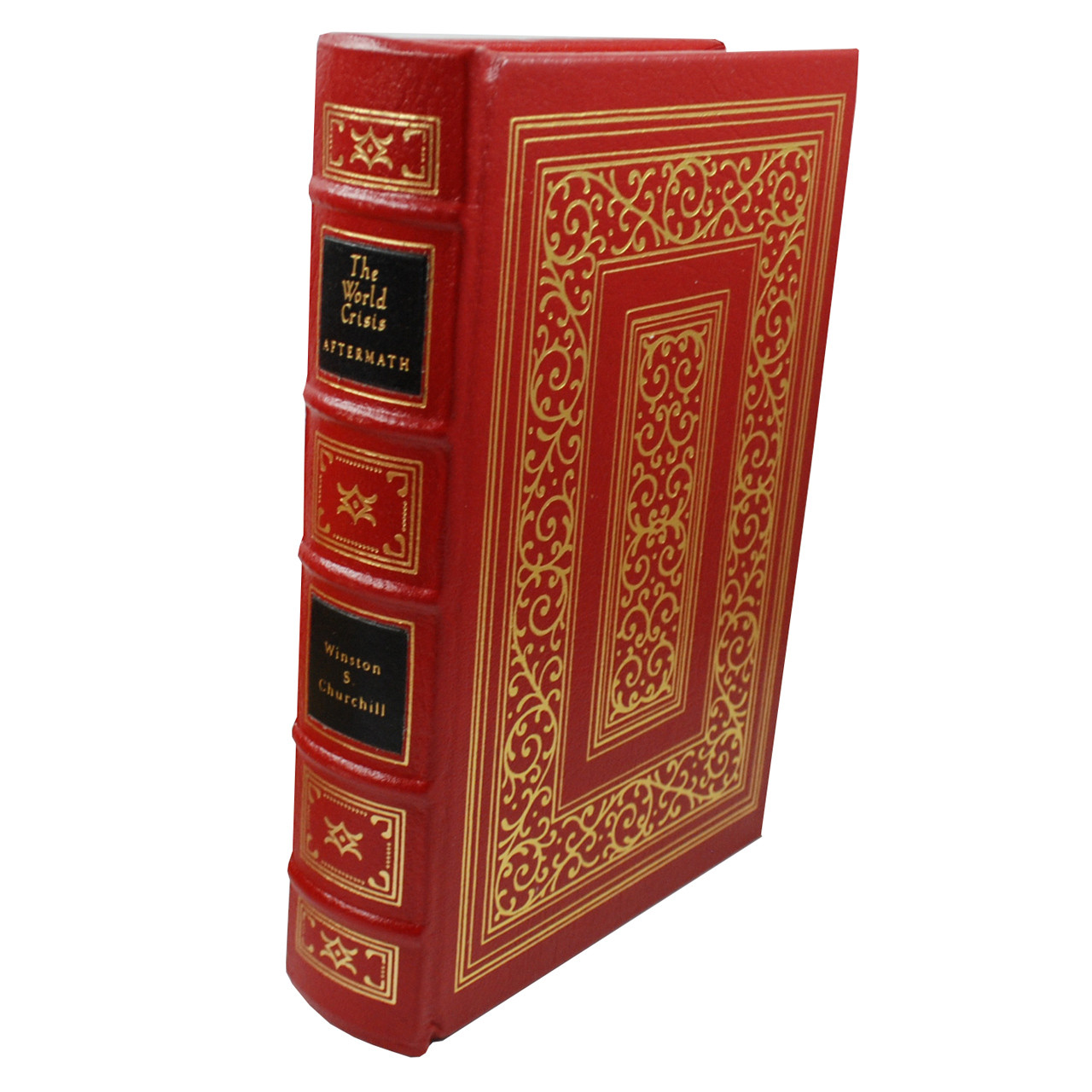 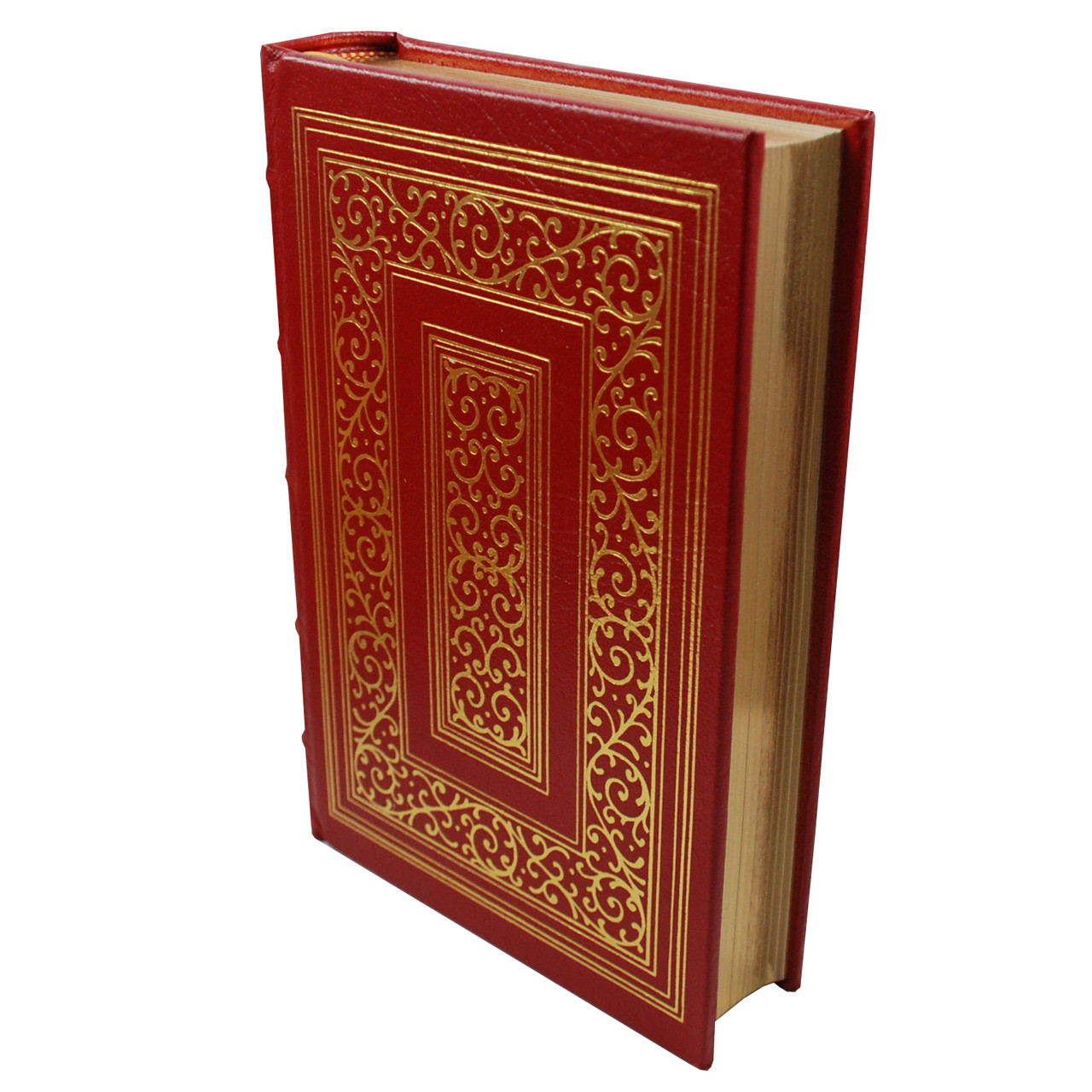 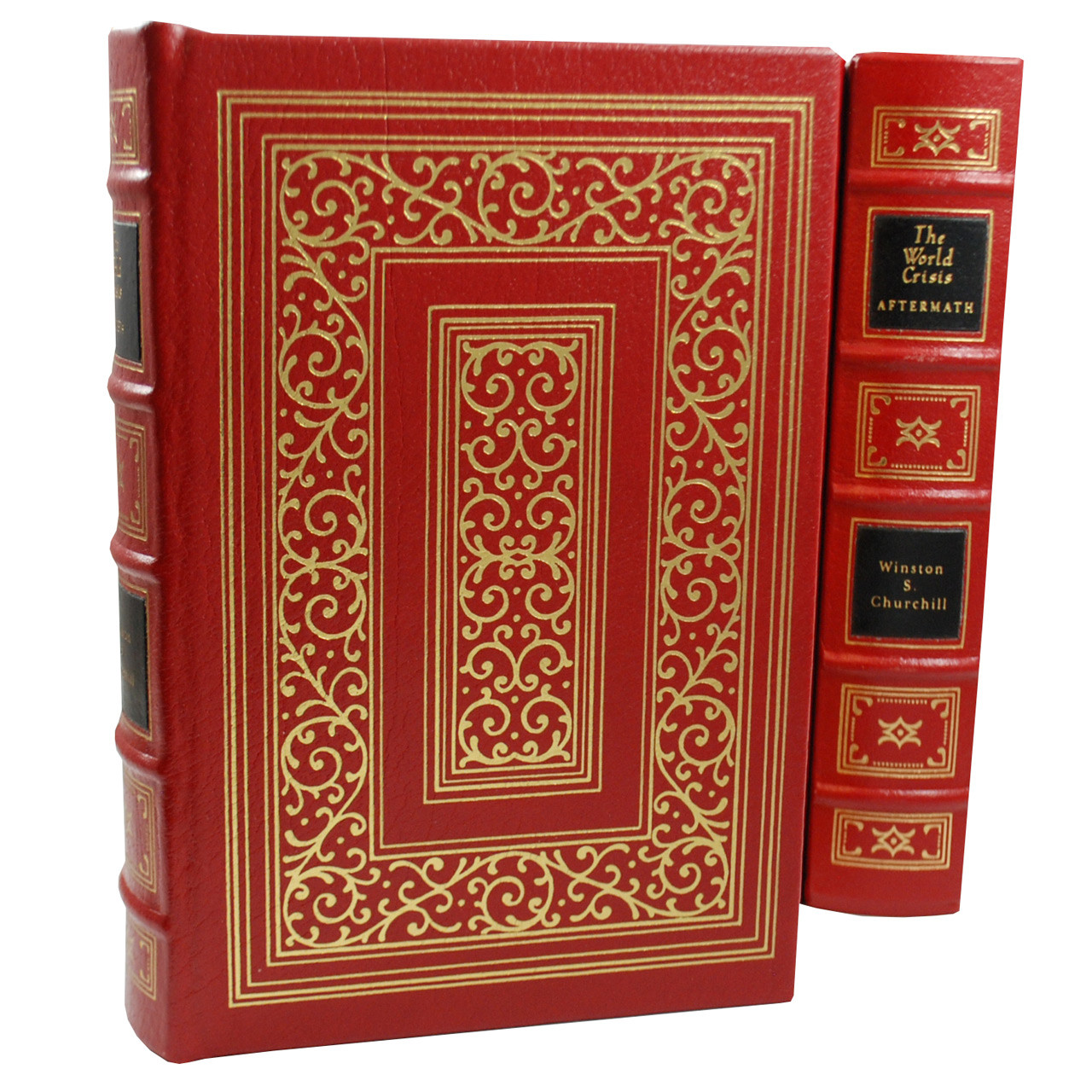 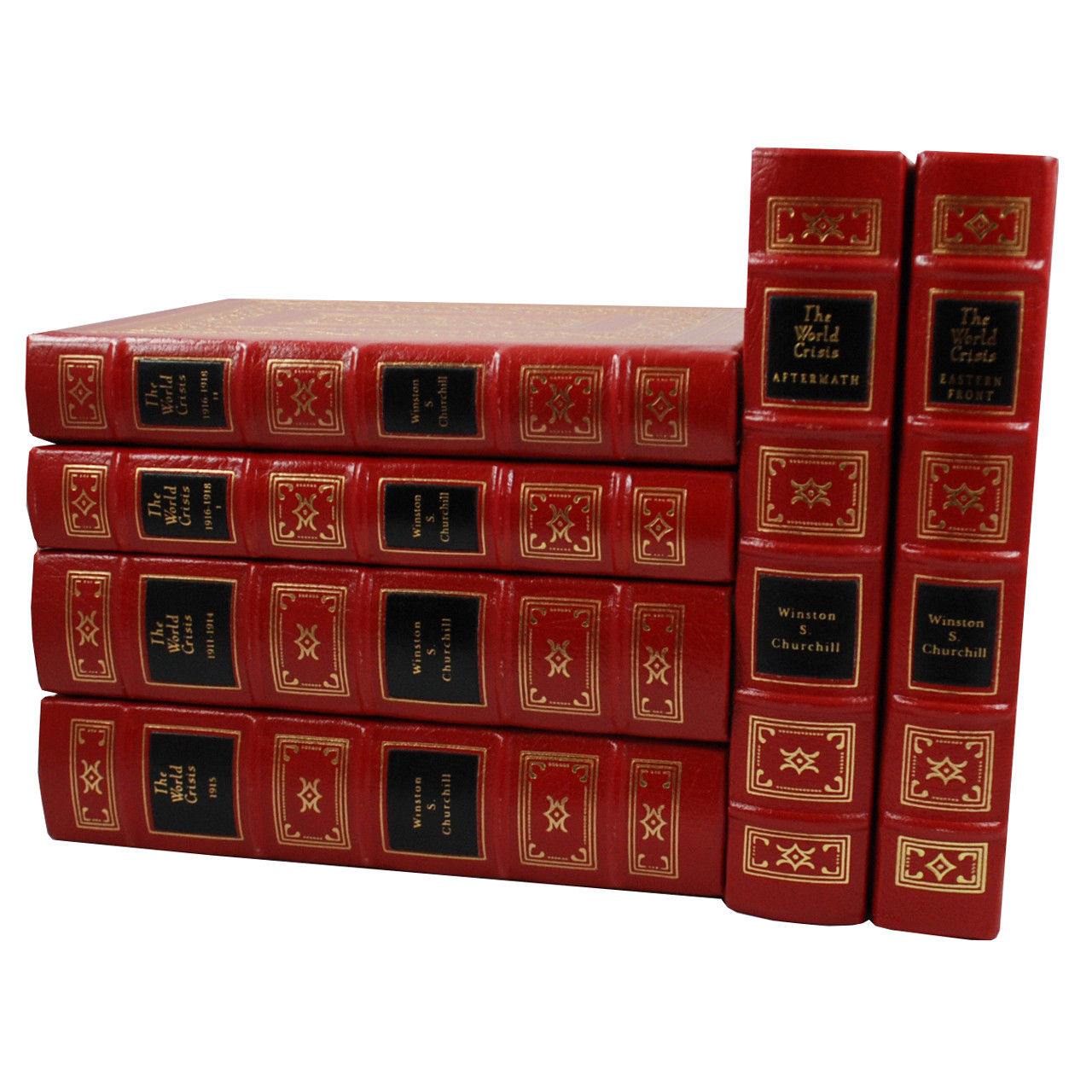 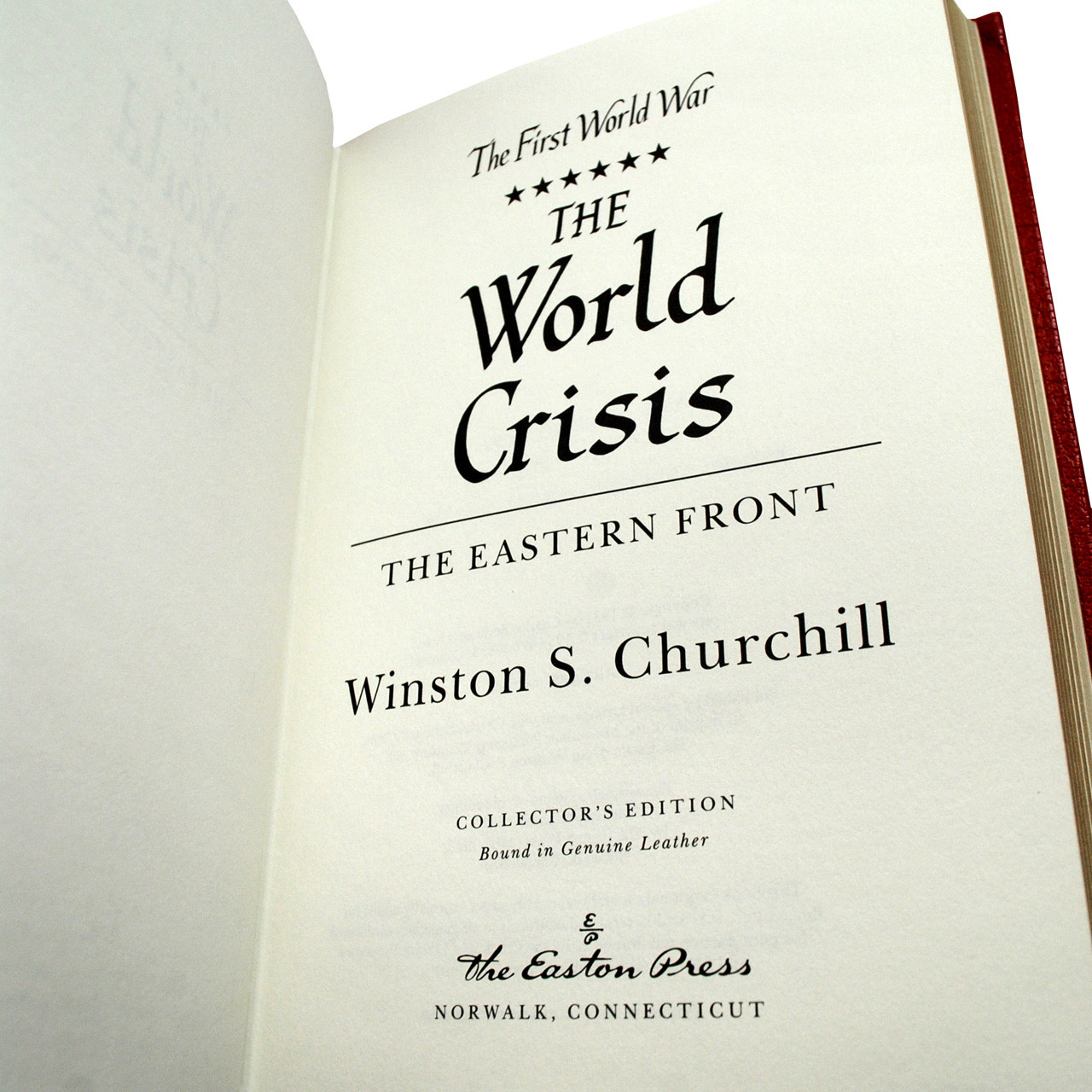 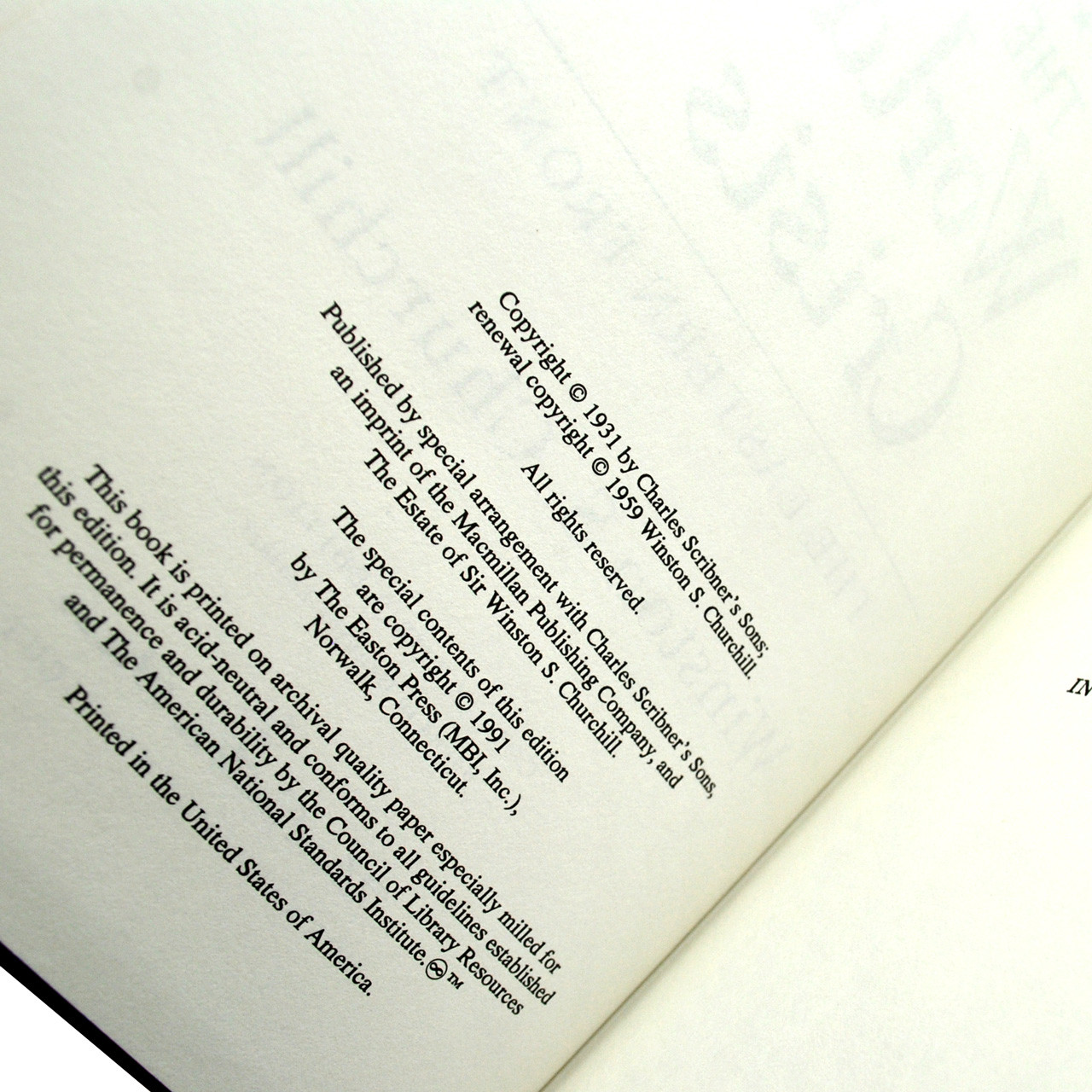 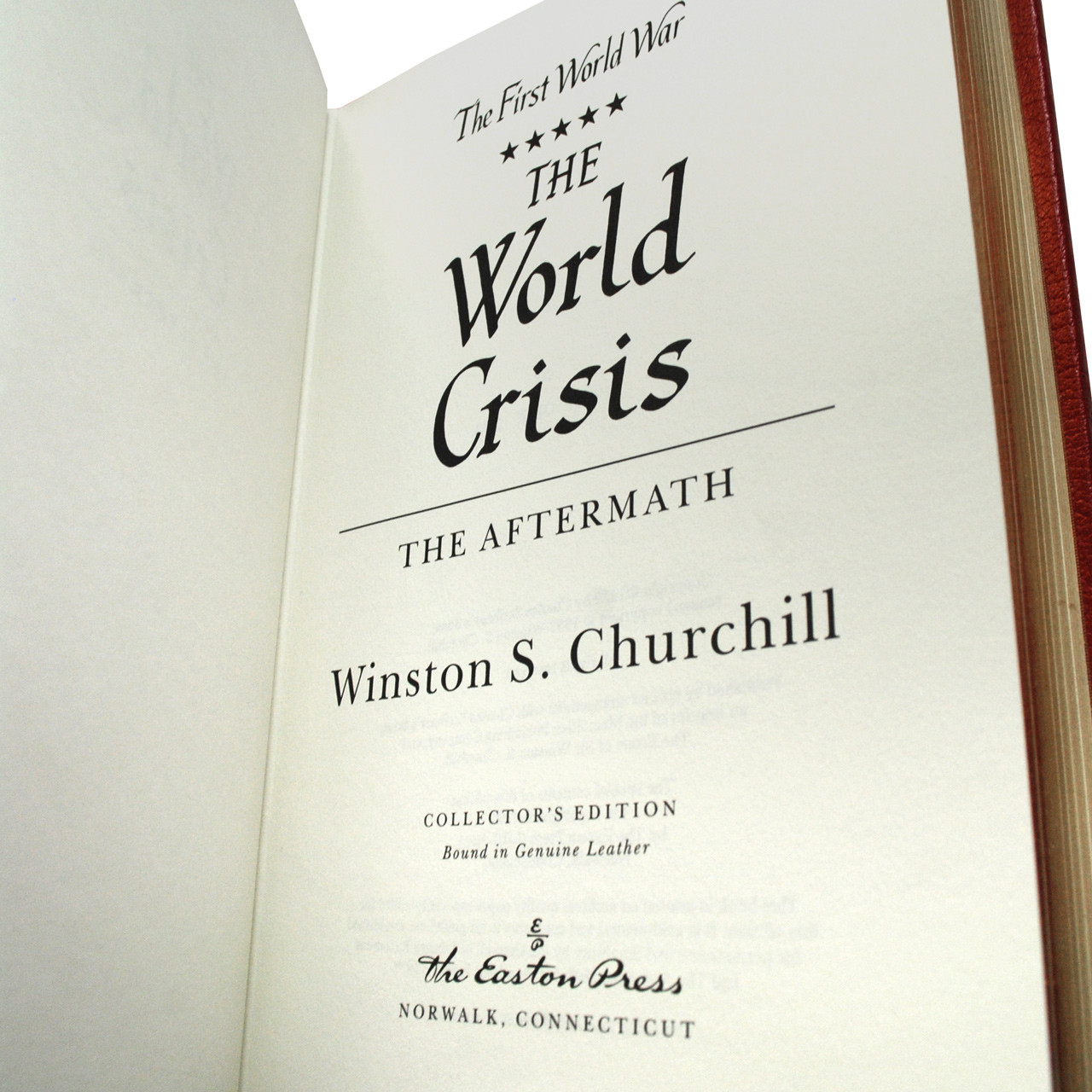 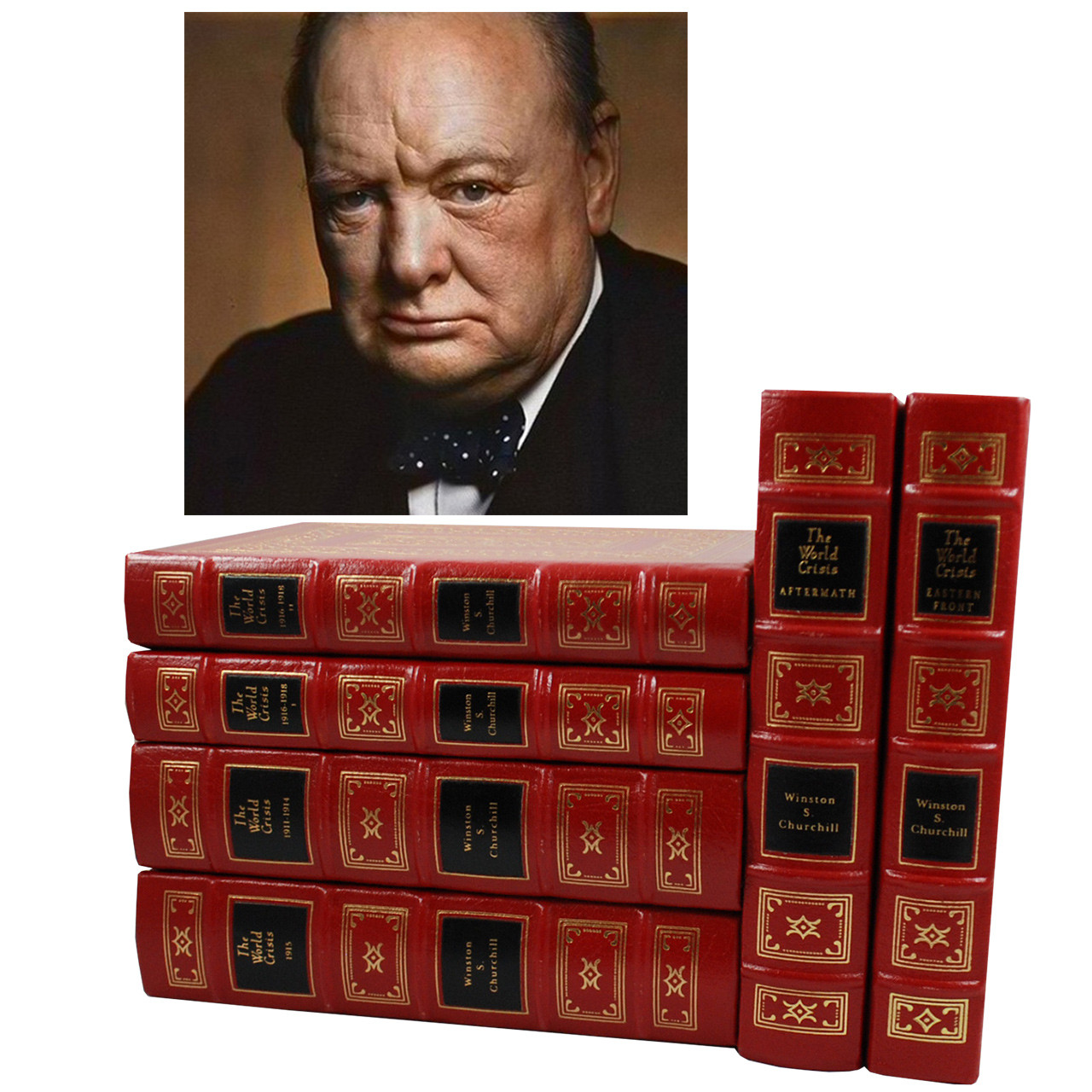 A Leather-bound collector's set by Winston Churchill, one of the greatest statesmen of our time and winner of the Nobel Prize for Literature 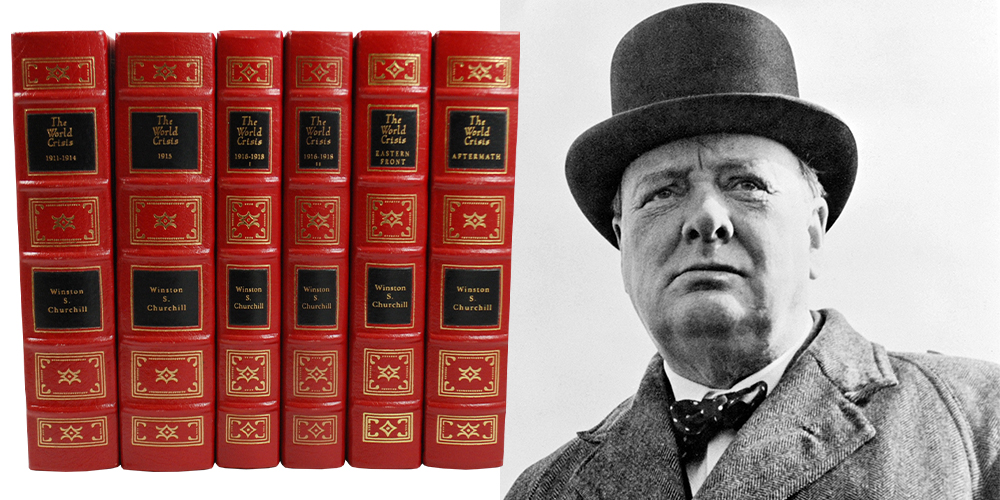 Winston Churchill was a British politician, best known for his leadership of the United Kingdom during the Second World War. He is widely regarded as one of the great wartime leaders of the 20th century, and he was also a writer. Churchill is the only British prime minister who has received the Nobel Prize in Literature.

Of mixed English and American parentage, Churchill was born in Oxfordshire to a wealthy, aristocratic family. He joined the British Army in 1895 and saw action in British India, the Anglo-Sudan War, and the Second Boer War, gaining fame as a war correspondent and writing books about his campaigns. Elected a Conservative MP in 1900, he defected to the Liberals in 1904. In H. H. Asquith's Liberal government, Churchill served as President of the Board of Trade and Home Secretary, championing prison reform and workers' social security. As First Lord of the Admiralty during the First World War, he oversaw the Gallipoli Campaign but, after it proved a disaster, he was demoted to Chancellor of the Duchy of Lancaster. He resigned in November 1915 and joined the Royal Scots Fusiliers on the Western Front for six months. In 1917, he returned to government under David Lloyd George and served successively as Minister of Munitions, Secretary of State for War, Secretary of State for Air, and Secretary of State for the Colonies, overseeing the Anglo-Irish Treaty and British foreign policy in the Middle East. After two years out of Parliament, he served as Chancellor of the Exchequer in Stanley Baldwin's Conservative government, returning the pound sterling in 1925 to the gold standard at its pre-war parity, a move widely seen as creating deflationary pressure and depressing the UK economy.

Out of government during his so-called "wilderness years" in the 1930s, Churchill took the lead in calling for British rearmament to counter the growing threat of militarism in Nazi Germany. At the outbreak of the Second World War he was re-appointed First Lord of the Admiralty. In May 1940, he became Prime Minister, replacing Neville Chamberlain. Churchill formed a national government and oversaw British involvement in the Allied war effort against the Axis powers, resulting in victory in 1945. After the Conservatives' defeat in the 1945 general election, he became Leader of the Opposition. Amid the developing Cold War with the Soviet Union, he publicly warned of an "iron curtain" of Soviet influence in Europe and promoted European unity. He lost the 1950 election, but was returned to office in 1951. His second term was preoccupied with foreign affairs, especially Anglo-American relations and the preservation of the British Empire. Domestically, his government emphasised house-building and completed the development of a nuclear weapon (begun by his predecessor). In declining health, Churchill resigned as Prime Minister in 1955, although he remained an MP until 1964. Upon his death in 1965, he was given a state funeral.

Widely considered one of the 20th century's most significant figures, Churchill remains popular in the UK and Western world, where he is seen as a victorious wartime leader who played an important role in defending Europe's liberal democracy against the spread of fascism. He is also praised as a social reformer. He has, however, been criticised for some wartime events and also for his imperialist views. As a writer, Churchill was awarded the Nobel Prize for Literature in 1953 for his historical and biographical work. He was also a prolific painter. 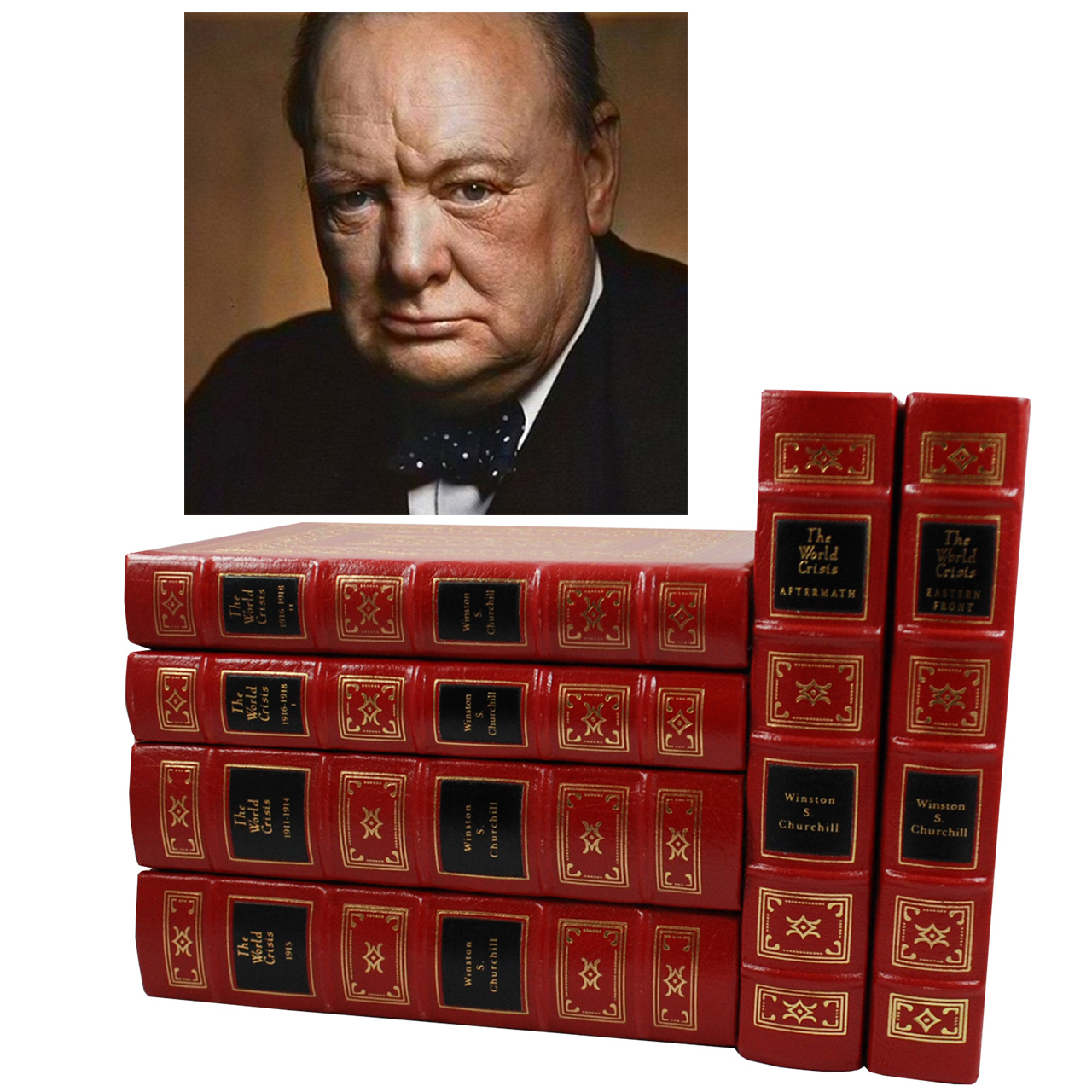 VERY FINE GUARANTEED. Very Fine with a minor flaw to one volume. Each one is a wonderful bright clean copy with tight bindings. Unread books with no bumped corners and free of any marks, writings or stamps. All photos of actual set.