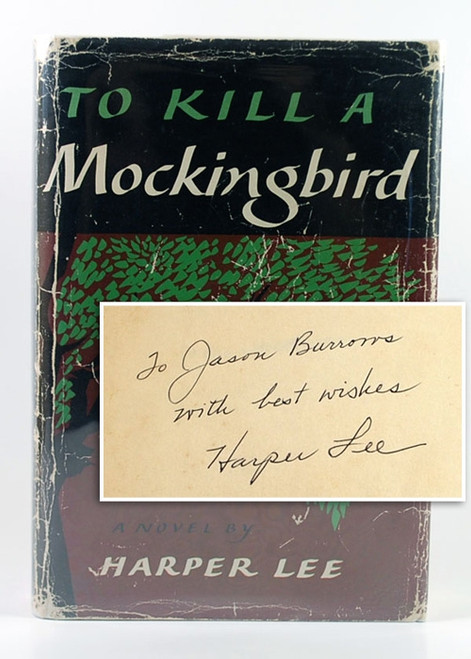 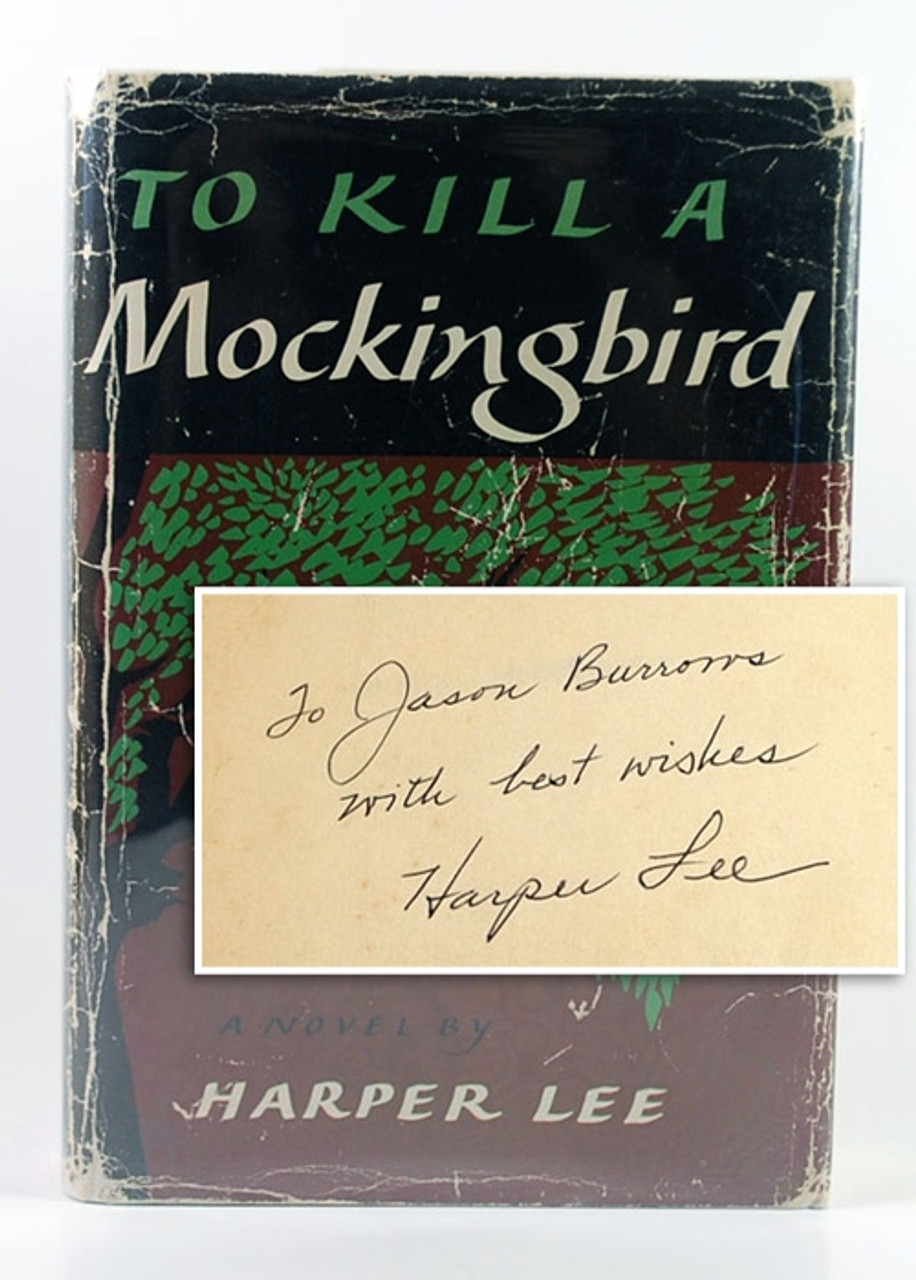 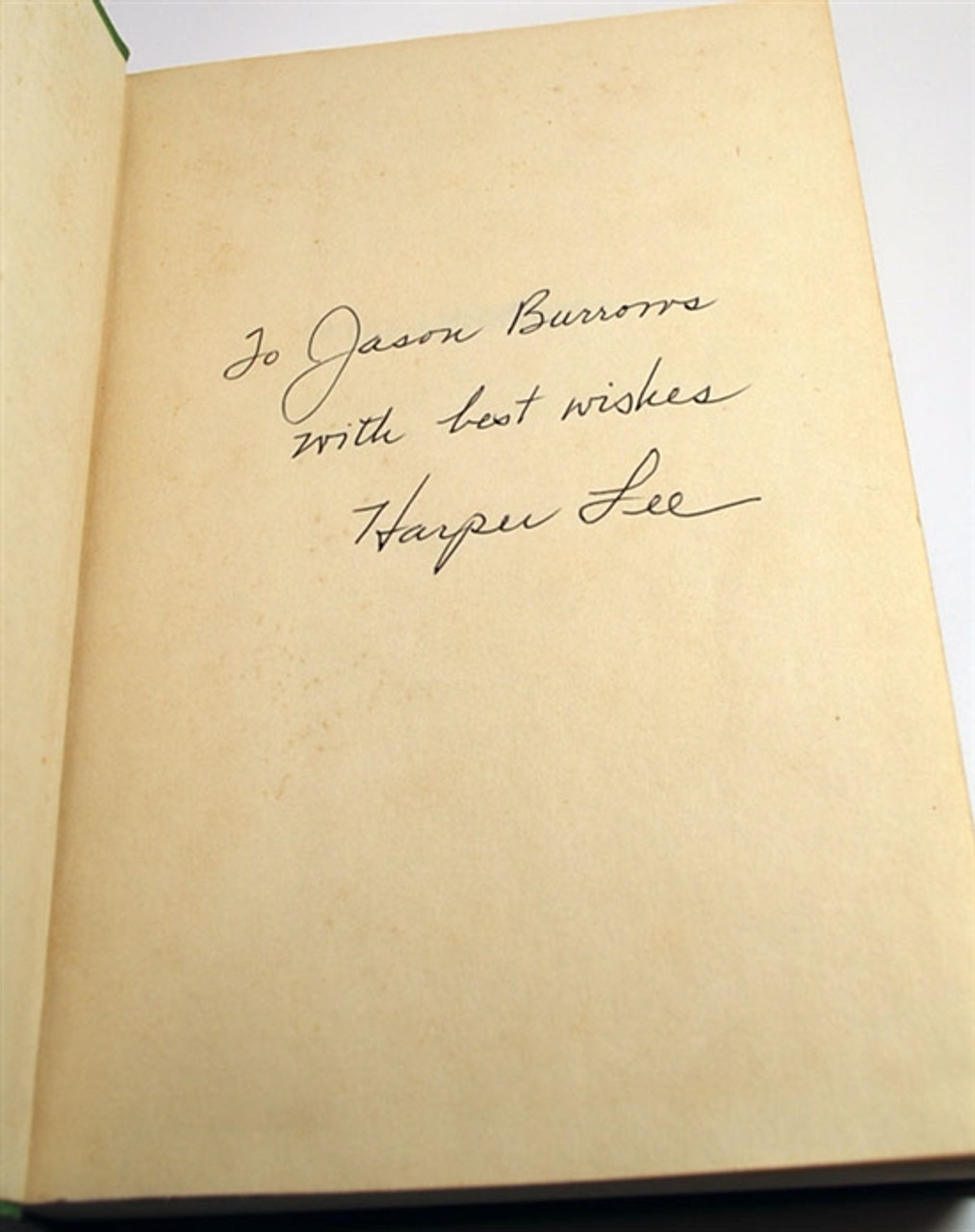 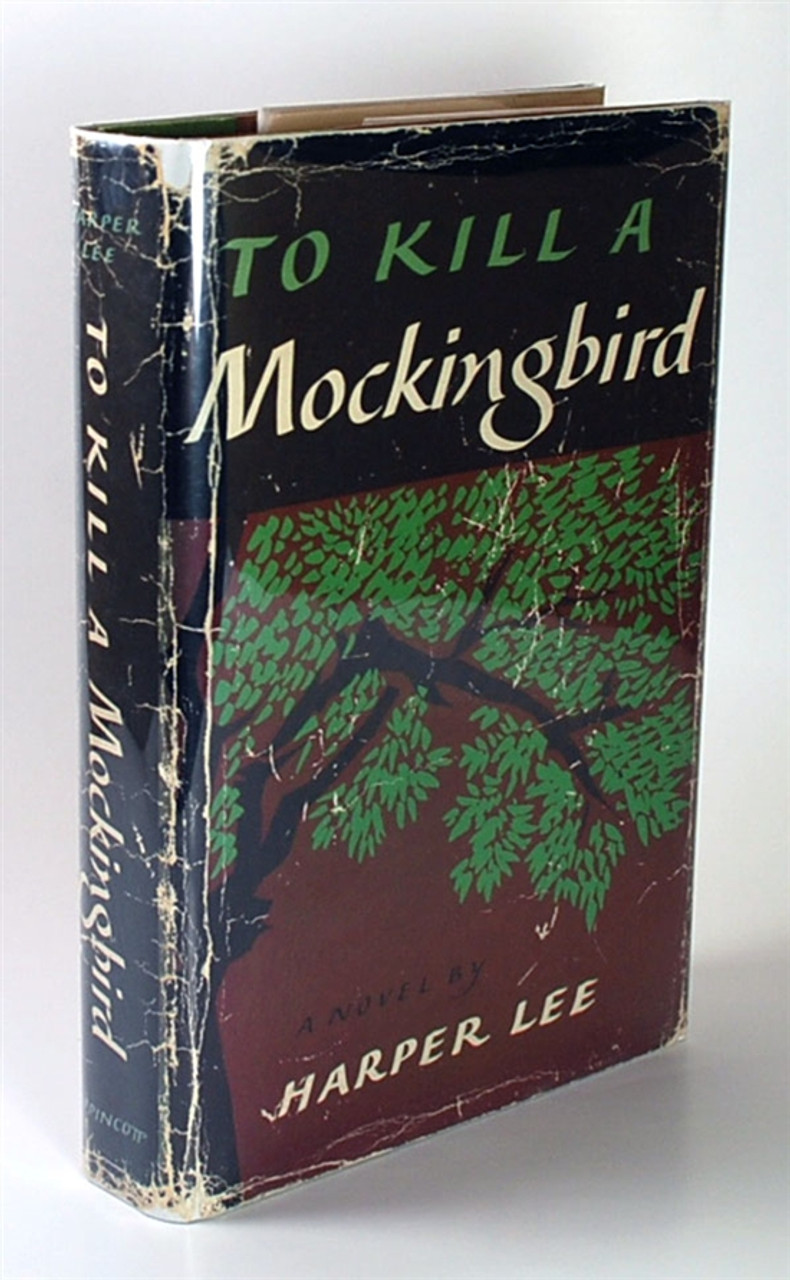 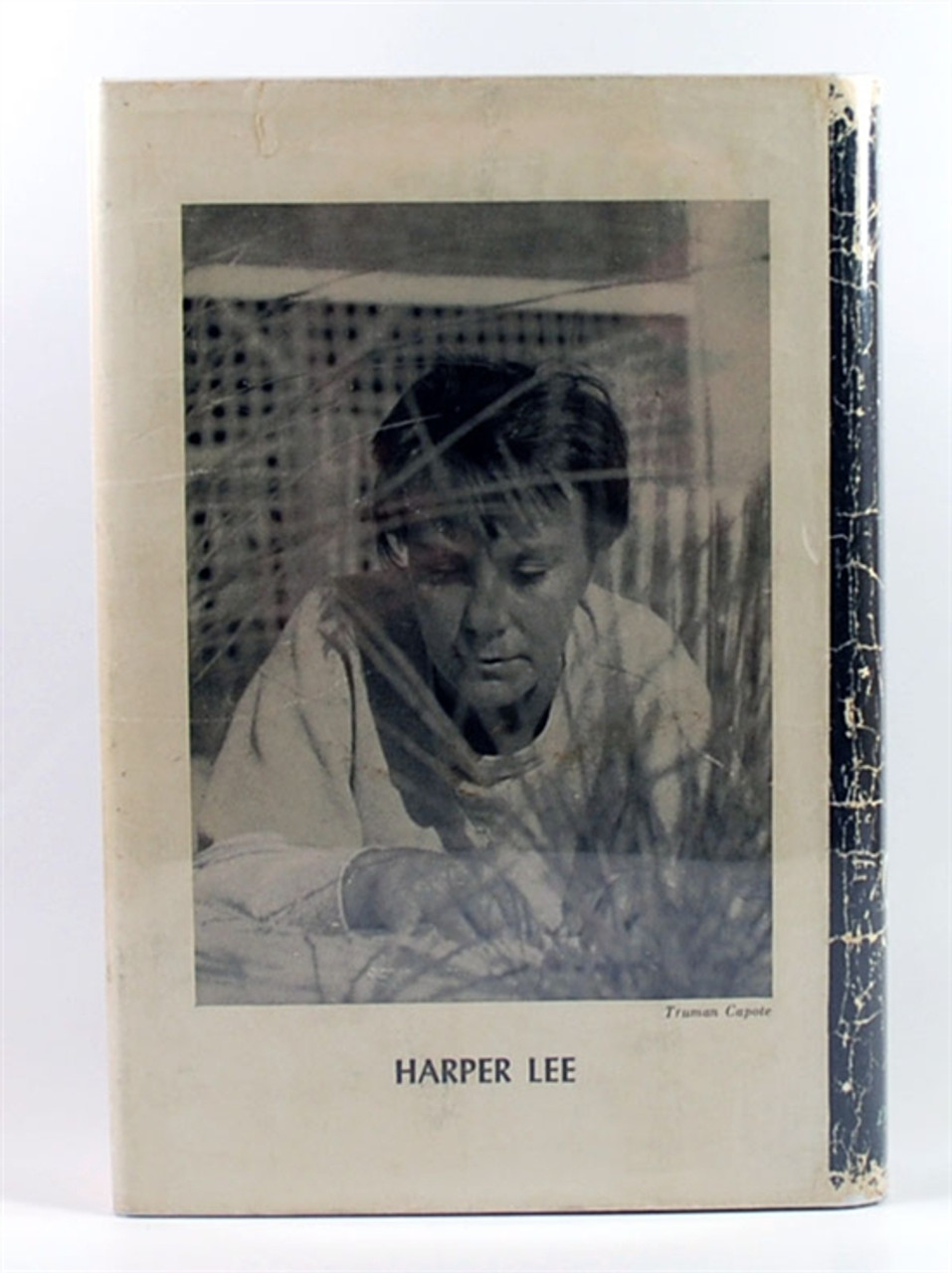 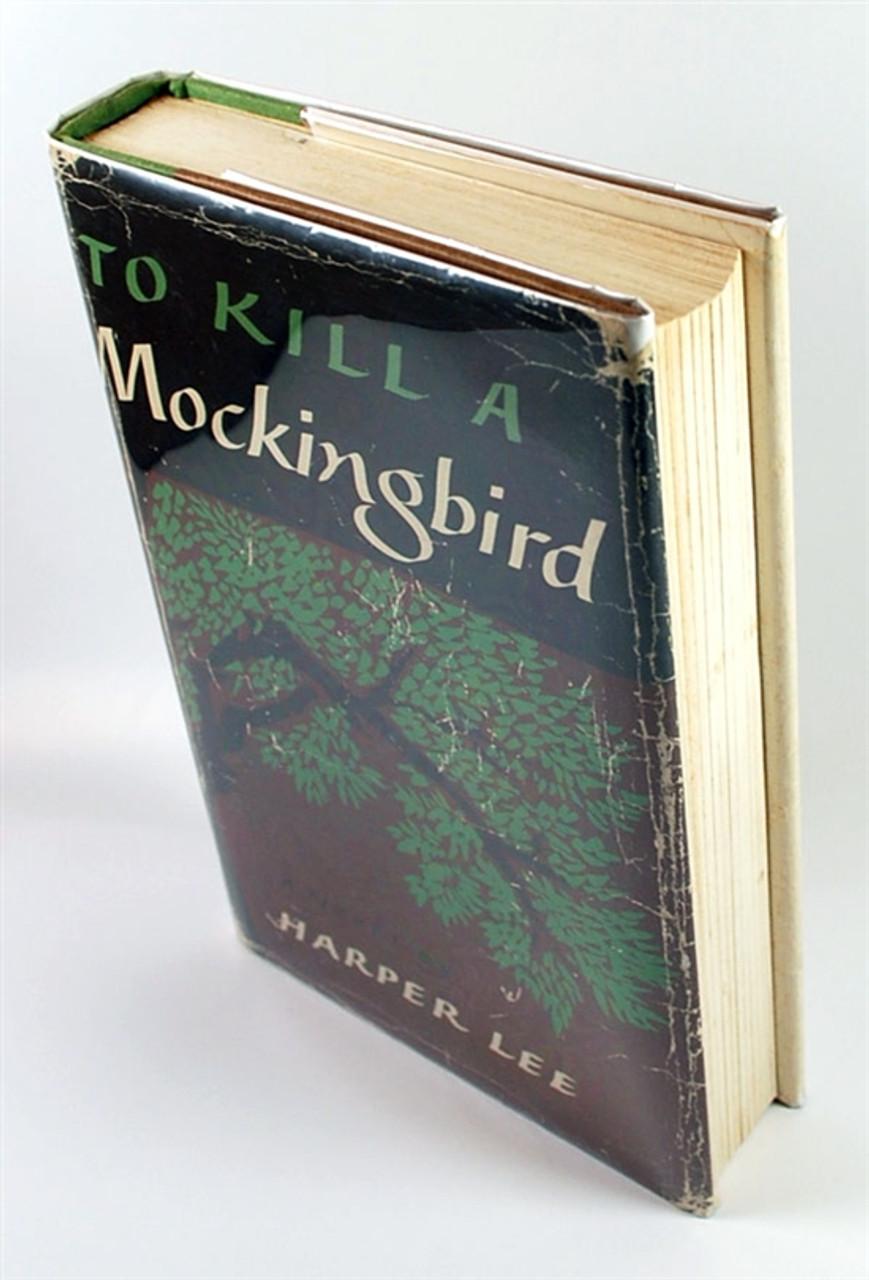 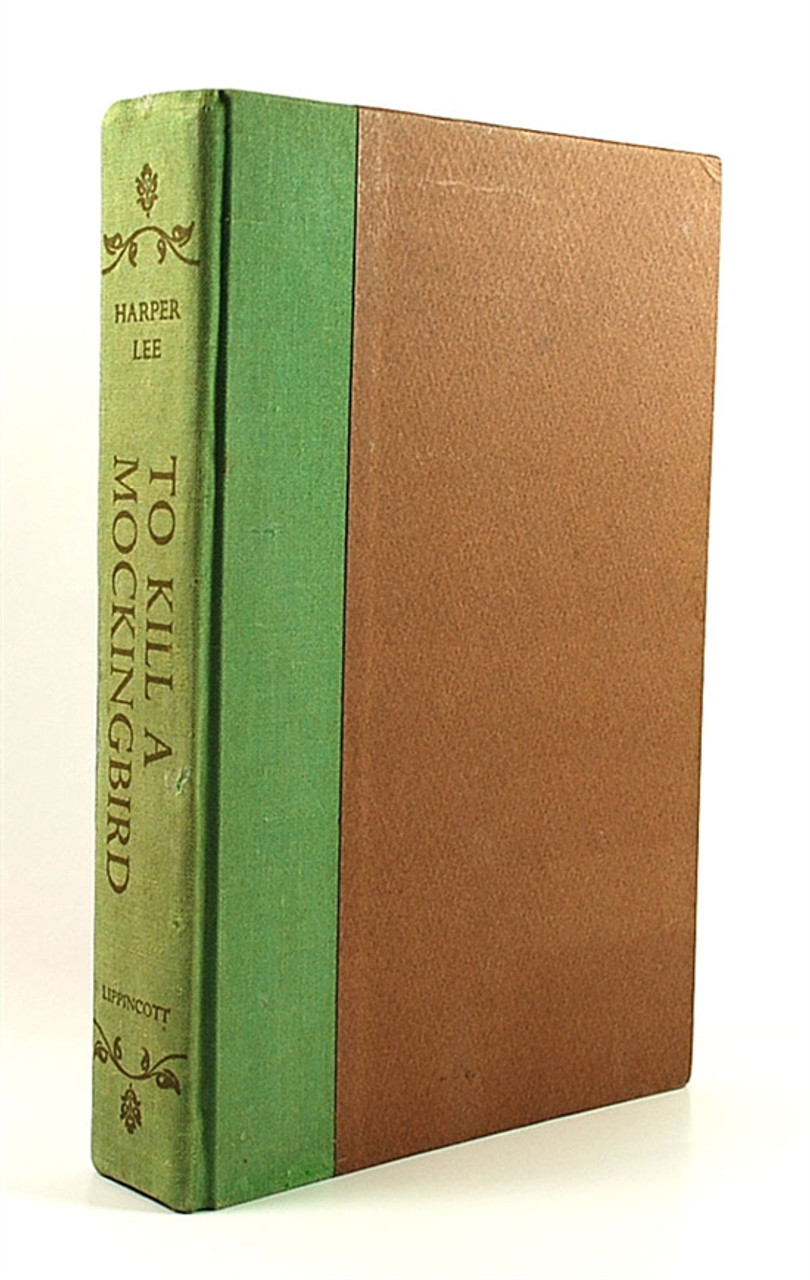 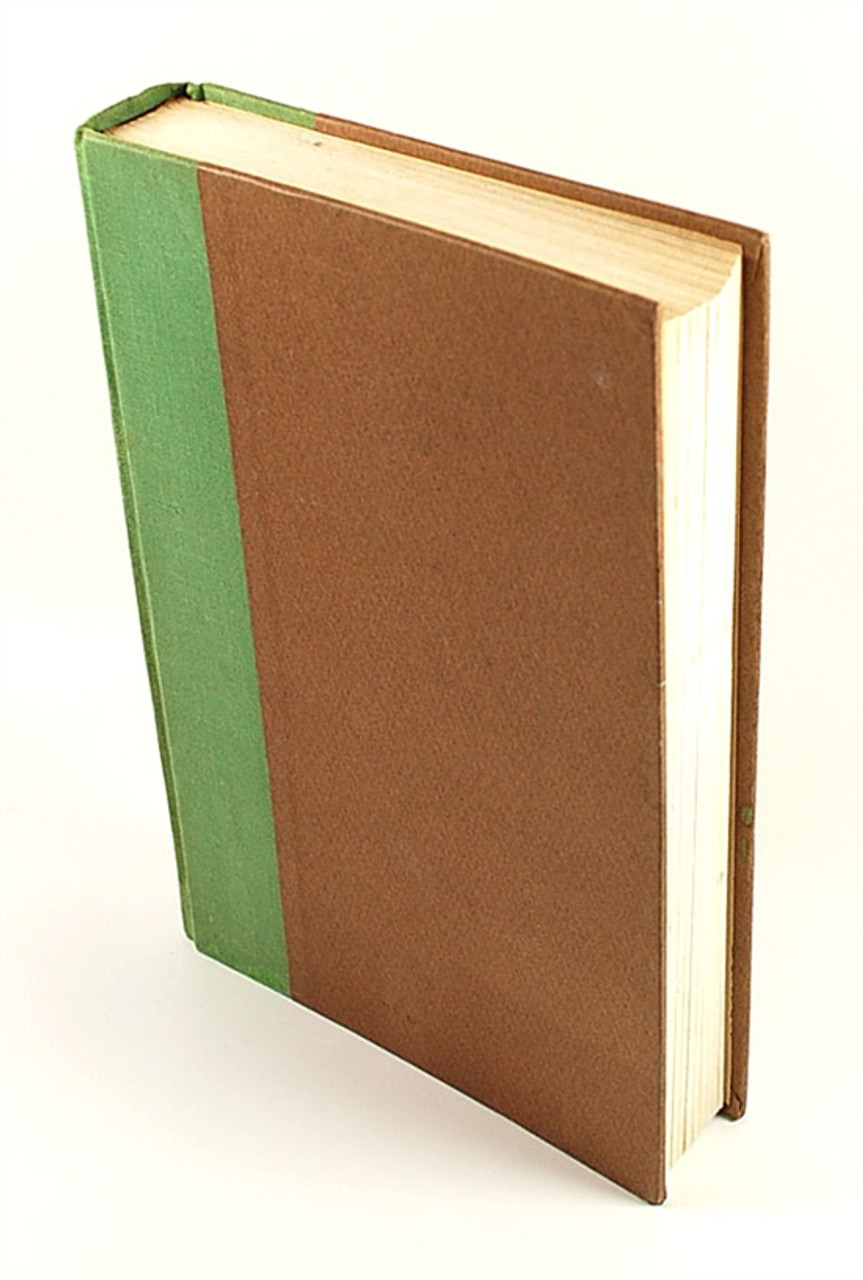 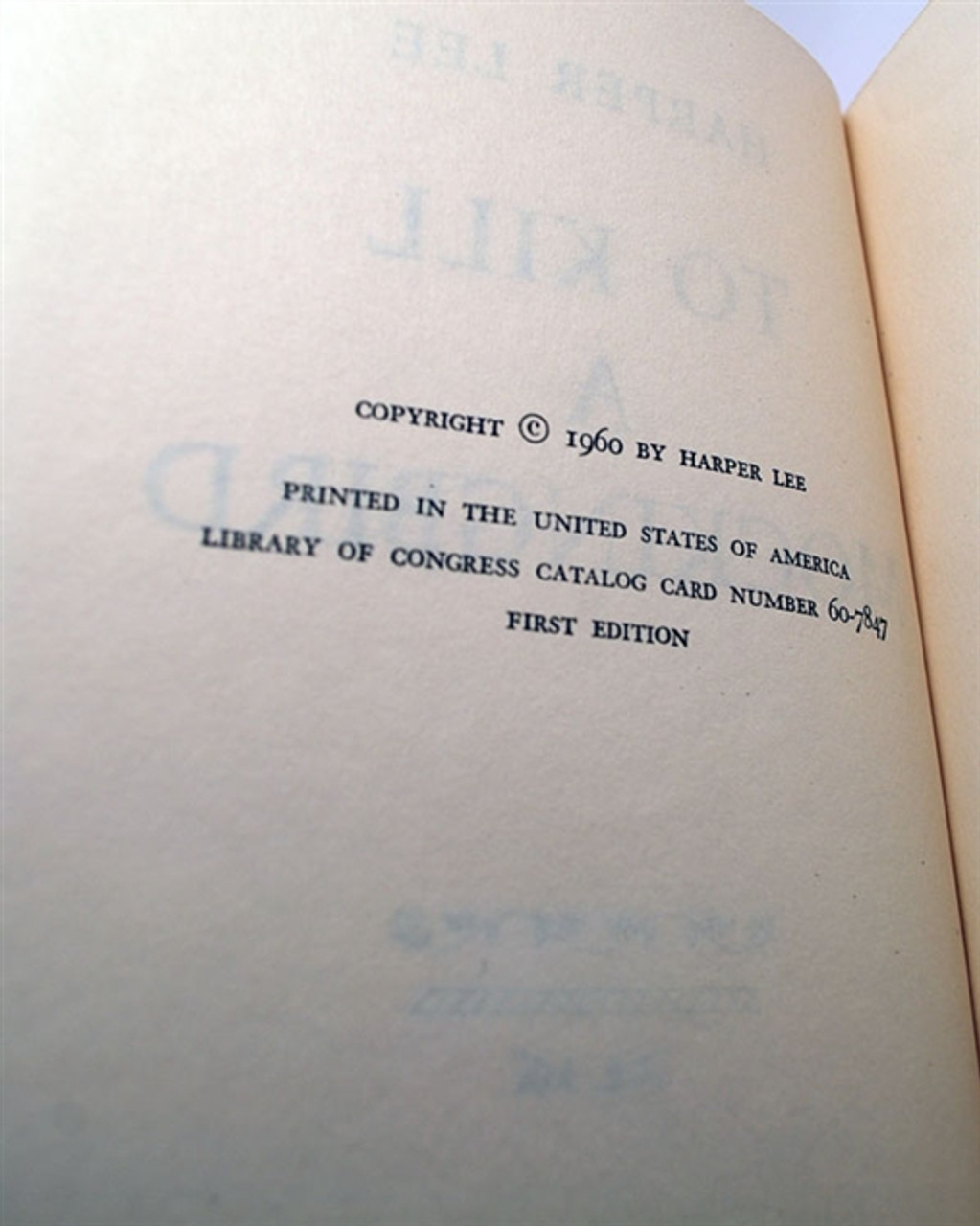 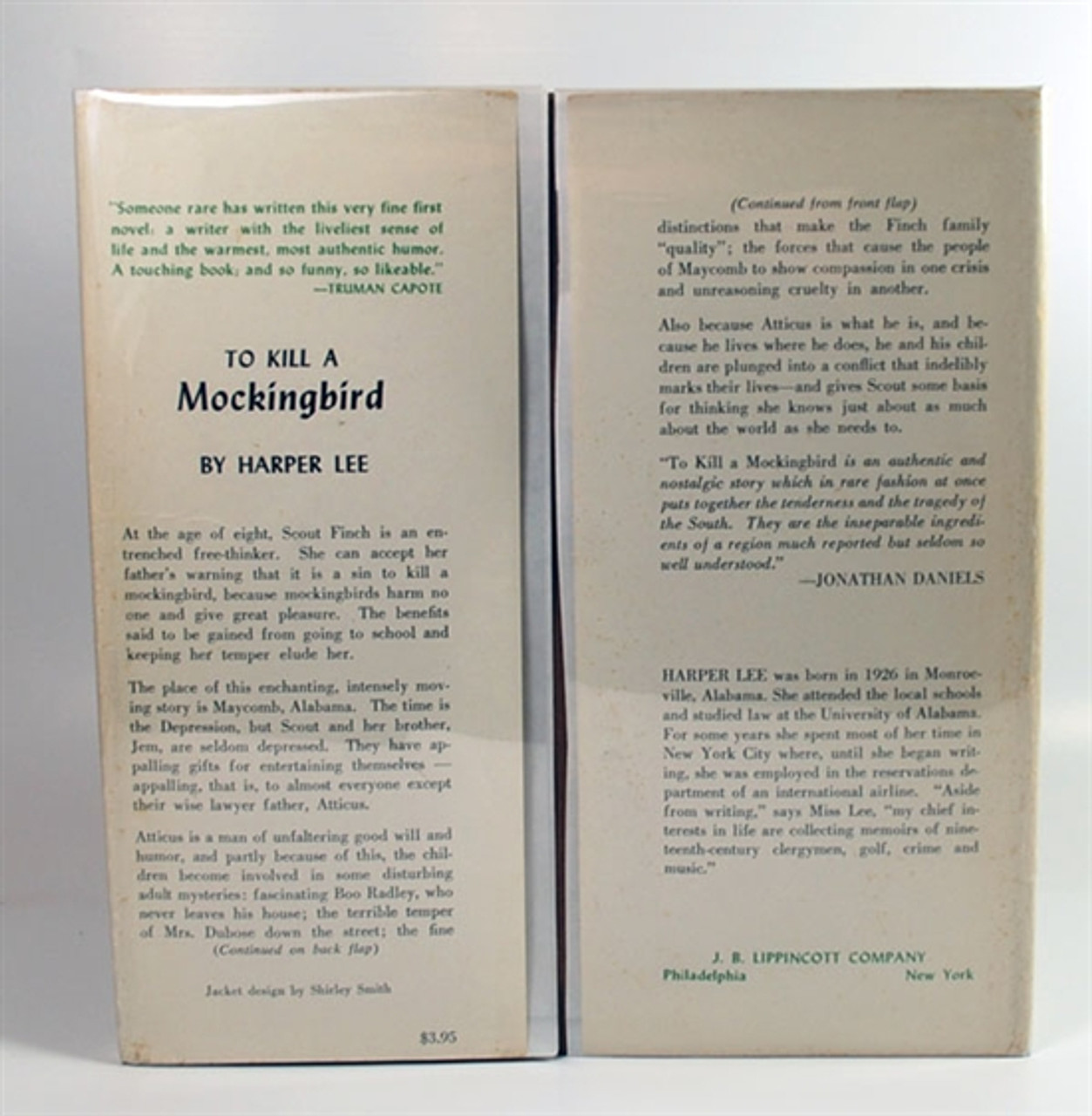 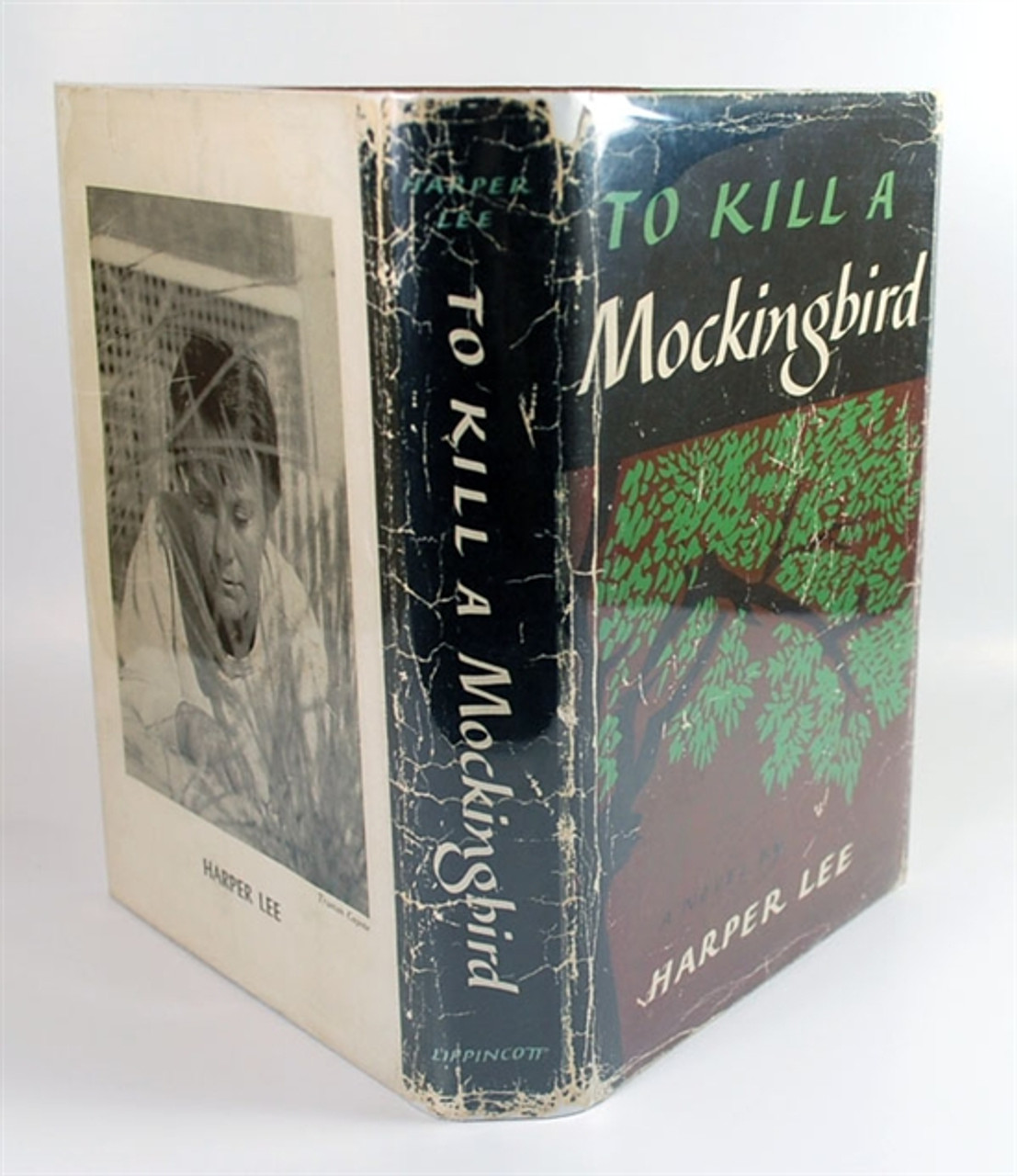 "Someone rare has written this very fine first novel: a writer with the liveliest sense of life, and the warmest, most authentic sense of humor. A touching book; and so funny, so likeable." - Truman Capote A rare and desirable signed first edition of one of the best-loved American classics. Signed by Harper Lee with a personal inscription directly onto the FFEP (First Free End Paper): "To Jason Burrows with best wishes Harper Lee".

Philadelphia and New York: J.B. Lippincott Company. Copyright 1960. Harper Lee "To Kill A Mockingbird". First Edition, First Printing. "First Edition" as required on the copyright page. Signed by the author Harper Lee with a personal inscription. An octavo size with original half green cloth and brown hardcover boards. Original and unrestored scarce first printing dust jacket with $3.95 on the lower flap. One of only 5,000 copies printed in this first edition.


Condition: The overall condition is much better than most copies of this first edition. Near Fine hardcover. A wonderful copy, clean and straight board without any bumped corners. No bookplates attached or indication of any removed. No other markings, writings or stamps. Very light marks to a few spots on the page edges. Square and tight spine. Clear and bright lettering on spine.

Original dust-jacket in Very Good+ condition. Some chipping to extremities with some dust-jacket loss to two end corners. Short closed tear on back cover. First edition dust-jacket that has not been restored and not price-clipped. Dust-jacket protected in brand new Mylar sleeve. All photos of the actual item. Includes matching clam shell case.

About To Kill A Mockingbird

To Kill a Mockingbird has earned many distinctions since its original publication in 1960. It has won the Pulitzer Prize, been translated into more than forty languages, has sold more than forty million copies worldwide, and has been made into an enormously popular movie. It was also named the best novel of the twentieth century by librarians across the country (Library Journal). "Shoot all the bluejays you want, if you can hit 'em, but remember it's a sin to kill a mockingbird." A lawyer's advice to his children as he defends the real mockingbird of Harper Lee's classic novel: a black man charged with the rape of a white girl. Through the young eyes of Scout and Jem Finch, Harper Lee explores with rich humor and unswerving honesty the irrationality of adult attitudes toward race and class in the Deep South of the 1930s.

The conscience of a town steeped in prejudice, violence, and hypocrisy is pricked by the stamina and quiet heroism of one man's struggle for justice, but the weight of history will only tolerate so much. To Kill a Mockingbird is a novel by Harper Lee published in 1960. It was immediately successful, winning the Pulitzer Prize, and has become a classic of modern American literature. The plot and characters are loosely based on the author's observations of her family and neighbors, as well as on an event that occurred near her hometown in 1936, when she was 10 years old.

The novel is renowned for its warmth and humor, despite dealing with the serious issues of rape and racial inequality. The narrator's father, Atticus Finch, has served as a moral hero for many readers and as a model of integrity for lawyers. One critic explains the novel's impact by writing, "In the twentieth century, To Kill a Mockingbird is probably the most widely read book dealing with race in America, and its protagonist, Atticus Finch, the most enduring fictional image of racial heroism. About the author Harper Lee Nelle Harper Lee is an American author known for her 1961 Pulitzer-Prize-winning novel To Kill a Mockingbird, which deals with the issues of racism that were observed by the author as a child in her hometown of Monroeville, Alabama. Despite being Lee's only published book, it led to her being awarded the Presidential Medal of Freedom for her contribution to literature. Lee has also been the recipient of numerous honorary degrees, but has always declined to make a speech.
Near Fine hardcover with Very Good+ original dust-jacket. Read description for full condition.

This special over-sized (coffee table sized) edition is limited to just 750 copies, each copy personally hand signed by Stephen King along with the illustrator Glenn Chadbourne.Number 747 of only...