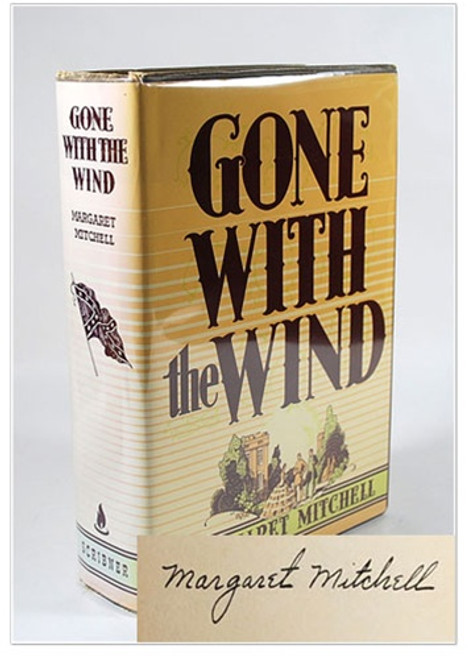 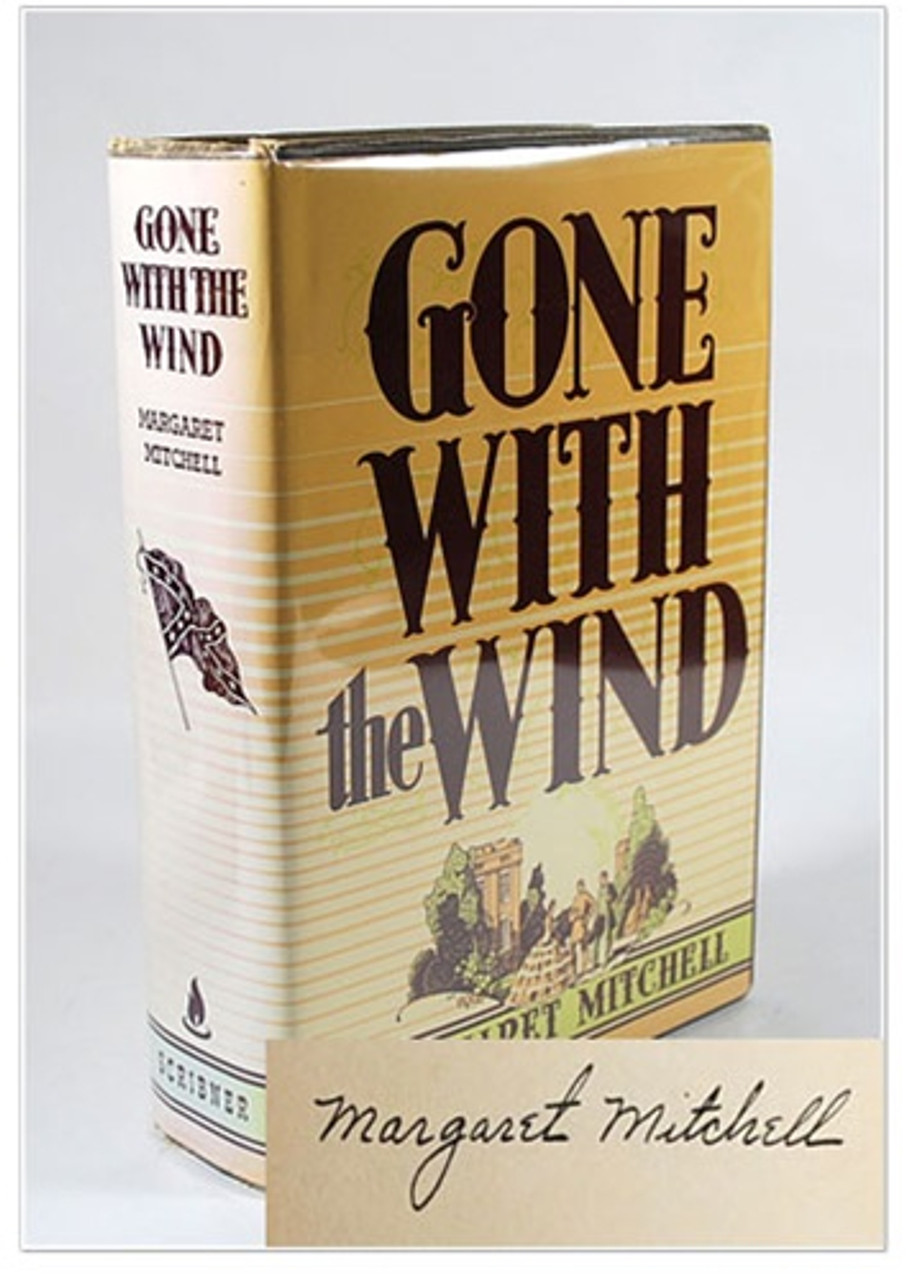 For the avid collector of signed first editions. First Edition, First Issue, May 1936 as stated on copyright page. "Gone with the Wind" won Margaret Mitchell the Pulitzer Prize in 1937.

Personally hand signed by Margaret Mitchell on the front free end paper. Autographed copies of the first printing are quite rare. Very desirable flat signed by Mitchell. An original hardcover book with facsimile dust jacket. The autograph is guaranteed to be authentic and is not an auto-pen, facsimile or a stamping.

MITCHELL, Margaret. Gone with the Wind. New York: Macmillan, 1936. Thick octavo, original gray cloth. First printing, with "Published May 1936" on the copyright page and no mention of other printings.

"This is beyond doubt one of the most remarkable first novels produced by an American writer. It is also one of the best... It has been a long while since the American public has been offered such a bounteous feast of excellent story-telling"  (New York Times Book Review, 1936).

This is said to be the fastest selling novel in the history of American publishing (50,000 copies in a single day).

About
Gone with the Wind is a 1936 American novel by Margaret Mitchell set in the Old South American Civil War and Reconstruction. The novel won the 1937 Pulitzer Prize and was adapted into an Academy Award-winning 1939 film of the same name. It was also adapted during the 1970s into a stage musical titled Scarlett; there is also a 2008 new musical stage adaptation in London's West End titled Gone With The Wind. It is the only novel by Mitchell published during her lifetime, and it took her ten years to write it. The novel is one of the most popular books of all time, selling more than 30 million copies (see list of best-selling books). Over the years, the novel has also been analyzed for its symbolism and treatment of mythological archetypes.

Time magazine included the novel in its TIME 100 Best English-language Novels from 1923 to 2005.

The title is taken from the first line of the third stanza of the poem Non Sum Qualis eram Bonae Sub Regno Cynarae by Ernest Dowson: "I have forgot much, Cynara! gone with the wind." The novel's protagonist Scarlett O'Hara also uses the title phrase in a line of dialogue in the book: when her hometown is overtaken by the Yankees, she wonders if her home, a plantation called Tara, is still standing, or if it was "also gone with the wind which had swept through Georgia".

Mitchell's work relates the story of a rebellious Southern belle named Scarlett O'Hara and her experiences with friends, family, lovers, and enemies before, during, and after the Civil War.

Using Scarlett's life, Mitchell examined the effect of the War on the old order of the South, and the aftermath of the war on what was left of the southern planter class. The plot of Gone with the Wind contains many details which have triggered spin-off concepts, parodies, and cultural influences over the past decades; however, the plot has been shortened here for the sake of brevity. "Just a line to thank you for packing this volume so well, and for dispatching it so promptly. I was away when it arrived, hence my delay in writing, but I'm delighted with the book and look forward to browsing through your catalogue again in the near future. In the meantime I shall certainly recommend your site to my colleagues here at the BL. Best wishes." Terrance, United Kingdom - April 2008 GONE WITH THE WIND - The Great American Novel "Nobody who finds pleasure in the art of fiction can afford to neglect... GONE WITH THE WIND " "a book of uncommon quality, a superb piece of storytelling..." - The New York Times. "Fascinating and unforgettable. A remarkable book, a spectacular book..."

This signed first edition will arrive in a custom crafted "GONE WITH THE WIND" clamshell case that is in brown & black Nuba® with sculpted design on the side. Nuba® is a fine, supple & durable covering with a neutral ph that has the feel of velvety soft Italian Nubuck® leather.

Lifetime Guarantee of Signature Authenticity
Personally hand signed by the author directly into the book.
The autograph is not a facsimile, stamp, or auto-pen. learn more

Please limit to 1 per customer. We have very few of these still remaining."Sarah Palin will be a major factor in American politics in the future." -Senator John McCain.

Easton Press, Norwalk CT. 1983 Victor Hugo "Notre-Dame de Paris (The Hunchback of Notre Dame)" Limited Edition Victor Hugo (1802-1885), novelist, poet, and dramatist, is one of the most important of...

Personally Signed By Dan Rather Easton Press, Norwalk CT. 2001 Dan Rather "The American Dream" Signed First Edition of only 1100 signed and numbered copies, this being number 731. A powerful and...