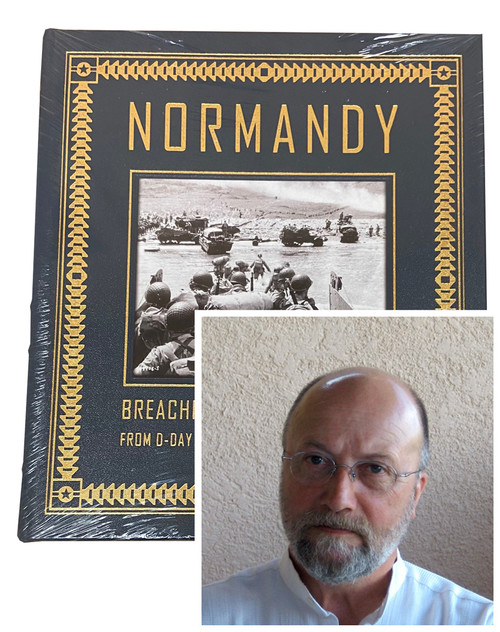 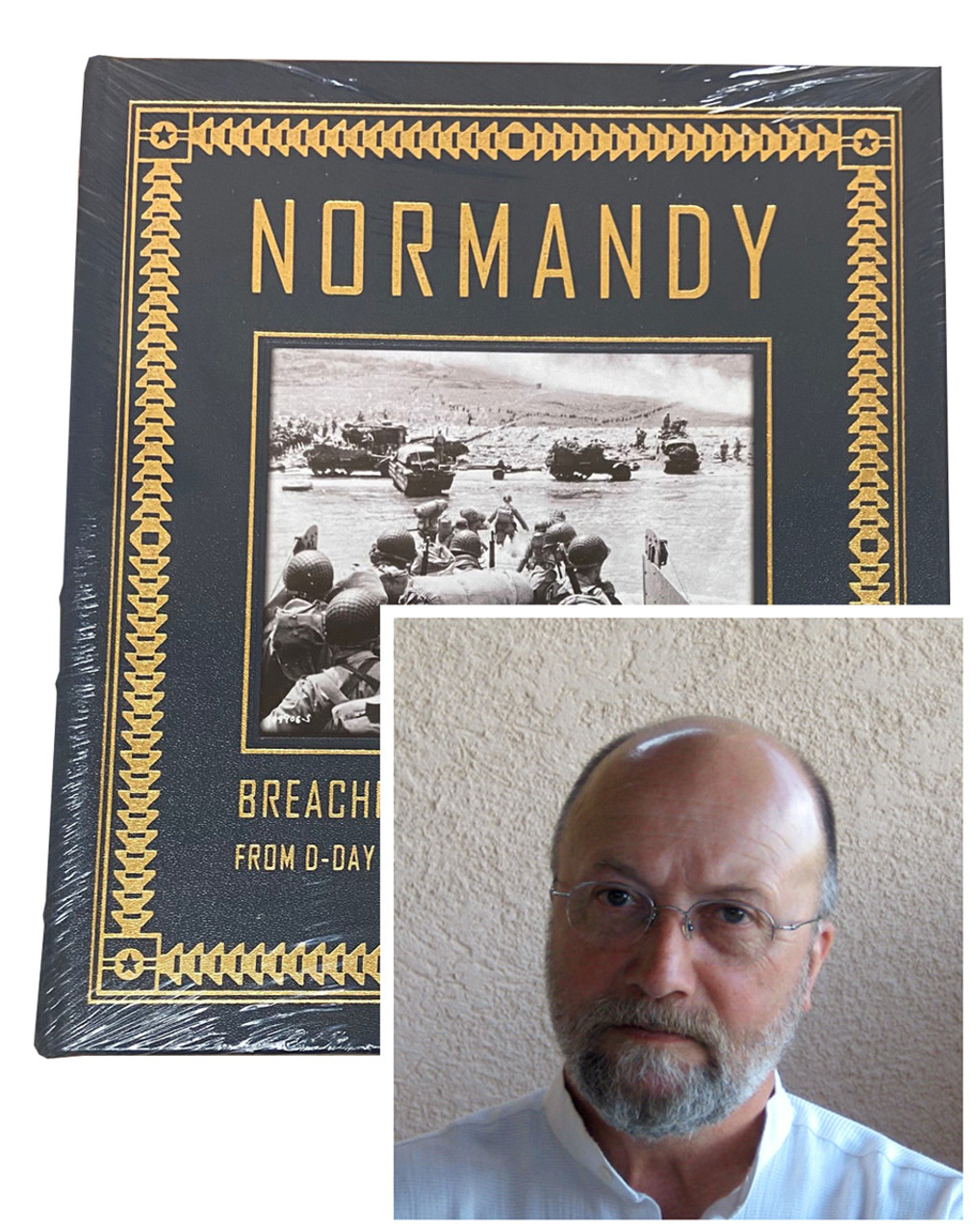 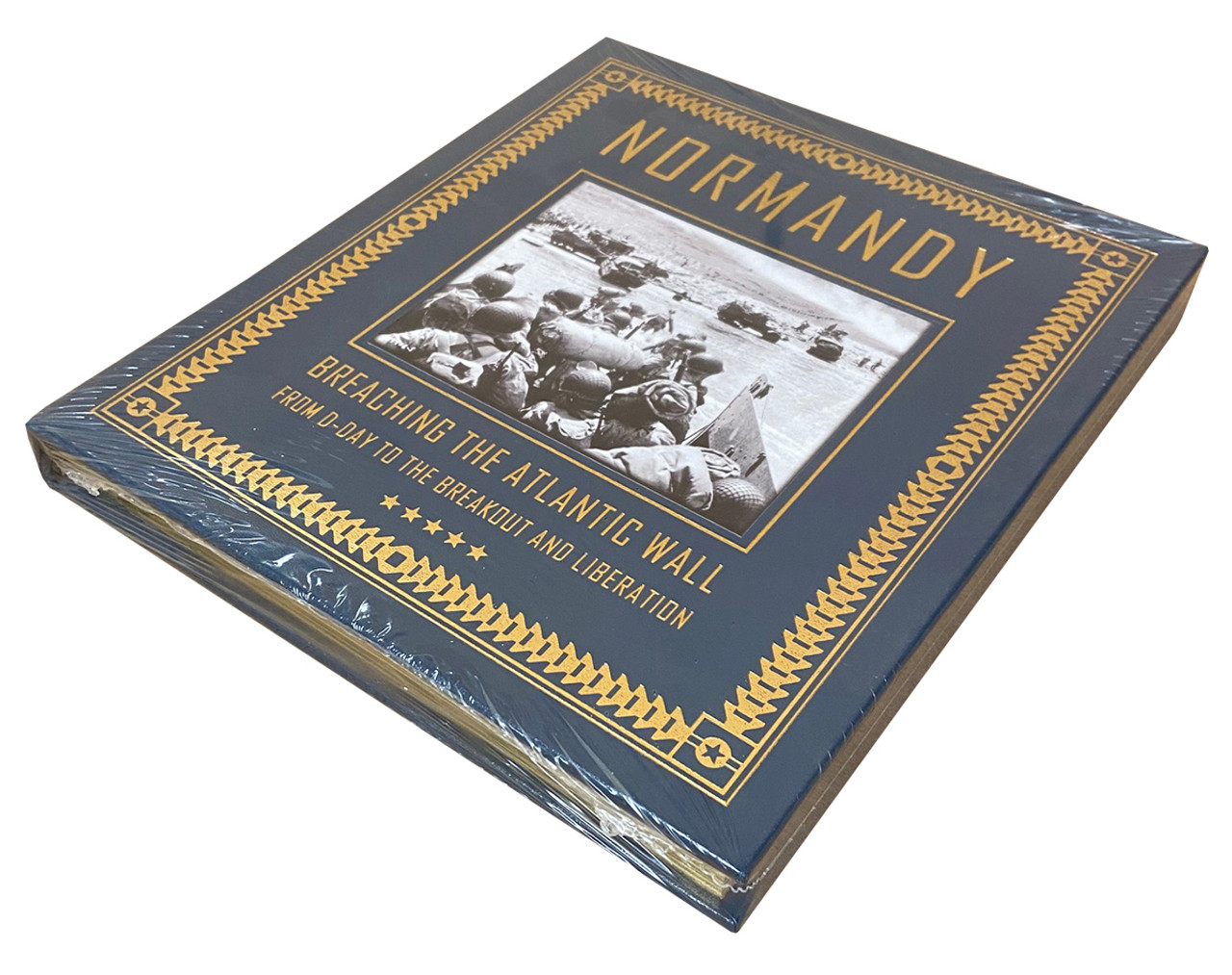 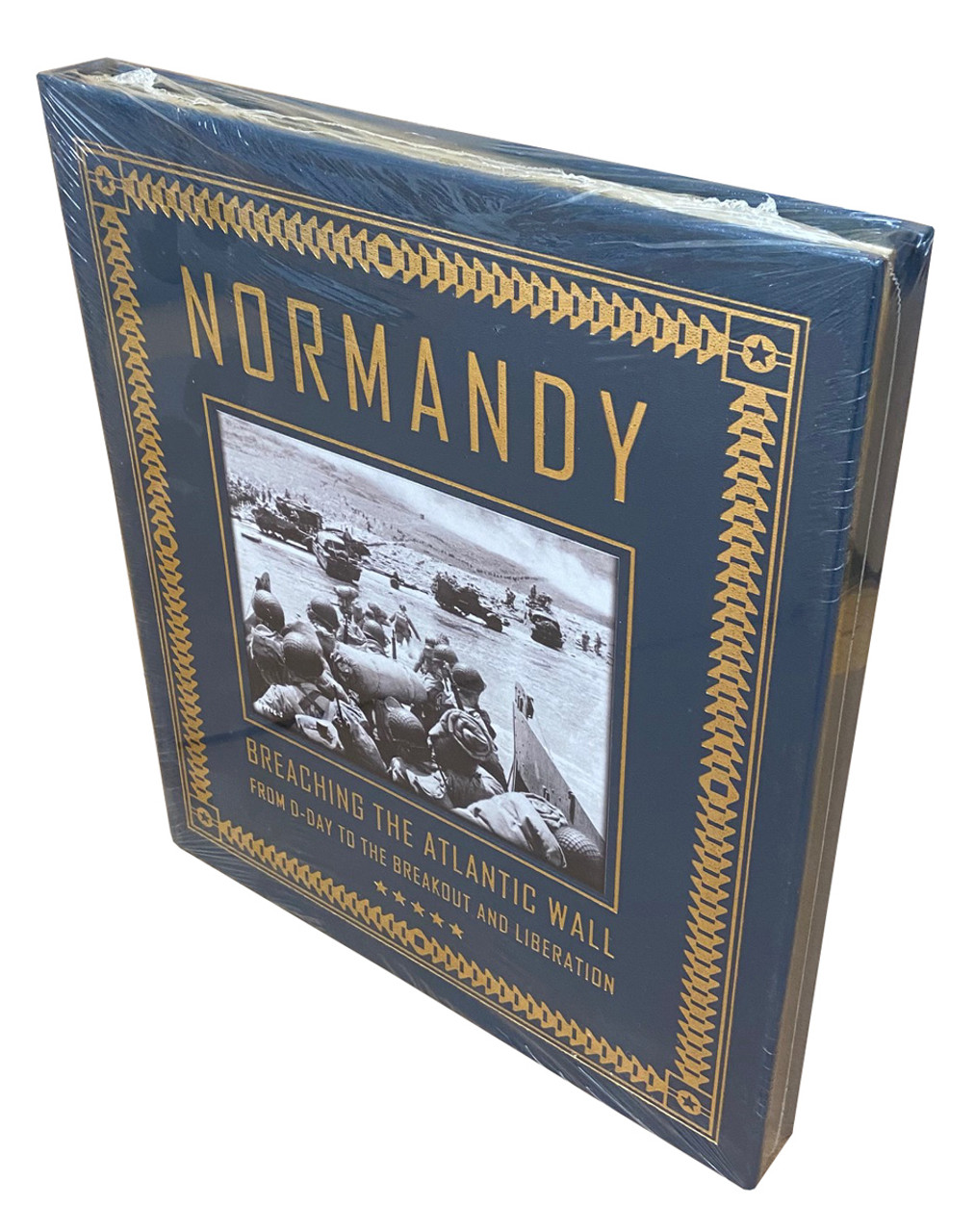 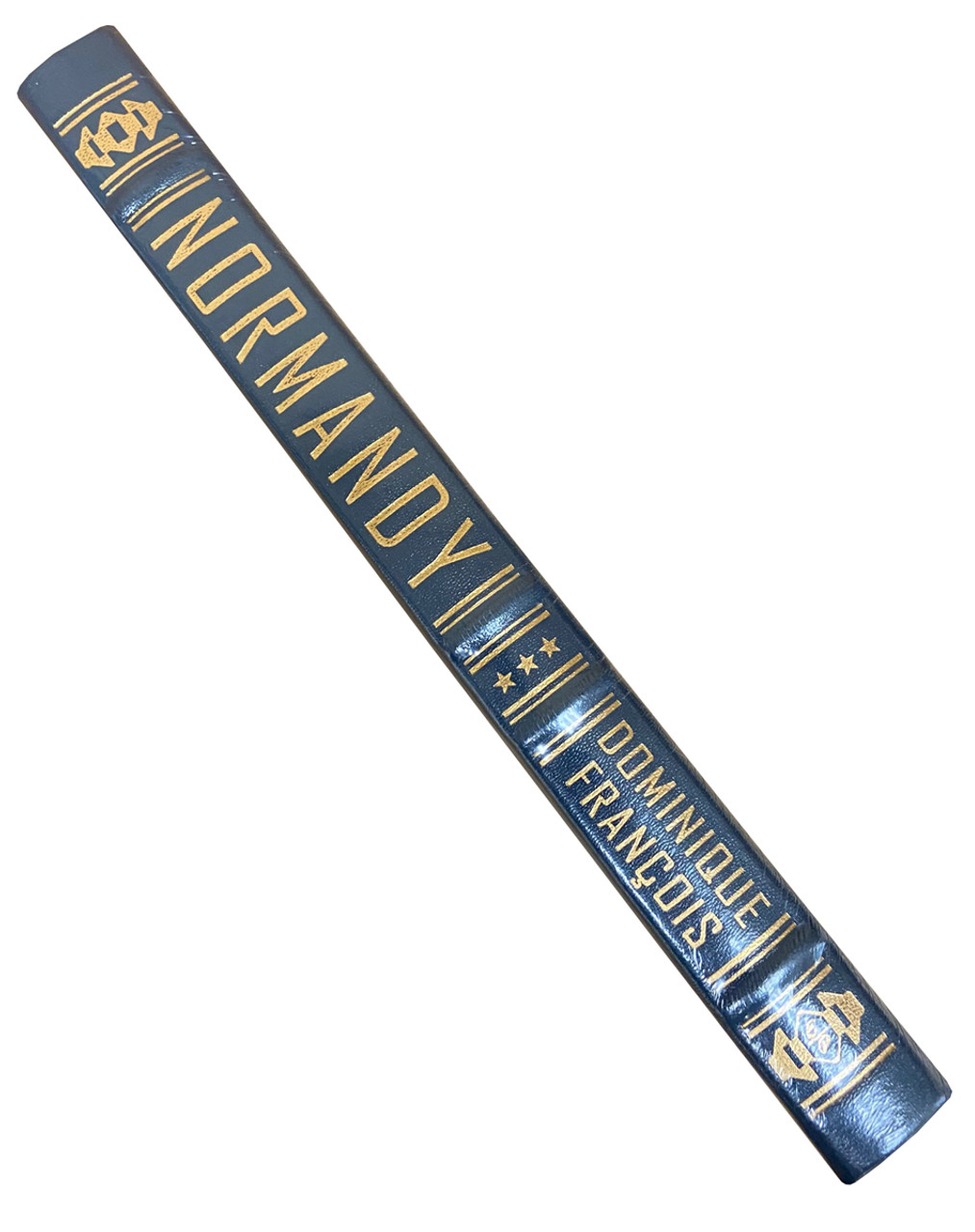 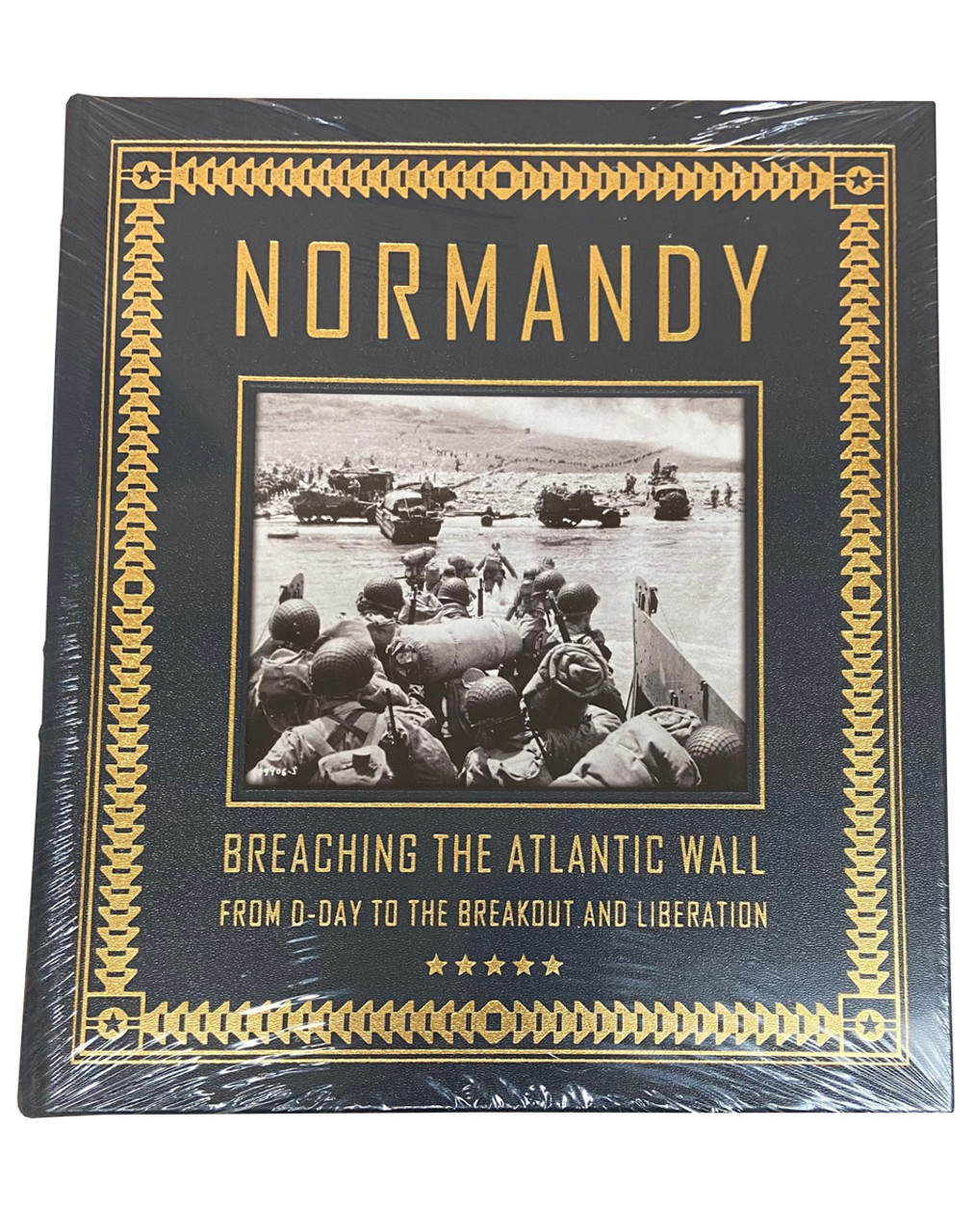 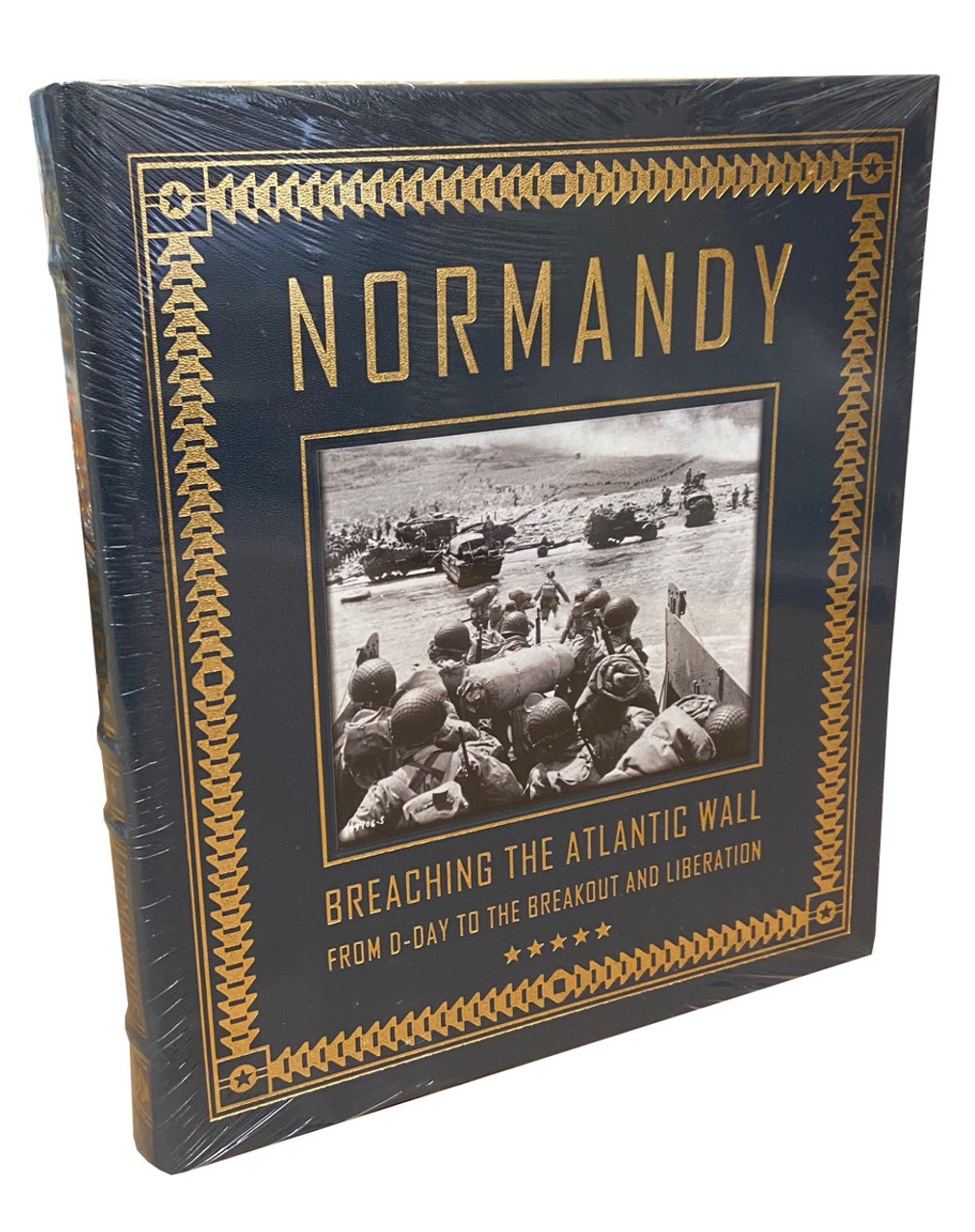 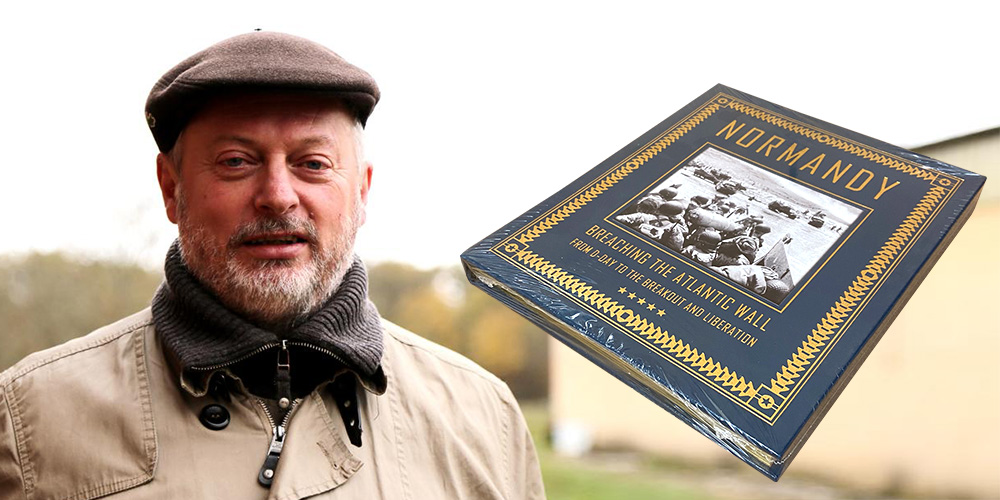 Black/White photograph on the front cover.

Told in full, in never-before-seen detail, this is the first complete illustrated history of Operation Overlord, the Allied invasion of France. The book's on-the-ground and behind-the-scenes accounts of both the attacking Allies and the defending Germans offer a uniquely broad perspective on the Normandy landing and subsequent battles.
From the invasion to the breakout, to Patton's opening of the road to Brittany, the Mayenne, and the Loire, and finally, with de Gaulle's triumphant return to Paris, the Battle of Normandy was won at a terrible price. This grand history covers all aspects of the battle.

This coffee-table book, packed with prints and photographs covering the Allies' June 1944 invasion of France is clearly a labor of love by French military historian François. A preinvasion bombing killed his grandfather, a Norman farmer, and barely missed his father, age 10 at the time. Chapter one offers family photographs as well as posters and photos of the 1940–1944 German occupation. Even better is an epilogue of before-and-after photographs juxtaposing images of locations like Omaha Beach in 1944 and 60 years later. In between, the pages teem with images of the massive Allied buildup in England, the invasion itself and the battles in Normandy interspersed with sidebars on generals and soldiers awarded medals for their bravery. Readers familiar with the iconic Normandy photographs will not find them; among the myriad of images in the archives, François's choices emphasize modest soldierly activity and civilian miseries. The extensive text delivers a conventional, undistinguished history of events, so readers will lose little by skimming. Picture books on the Normandy invasion would fill a substantial shelf, but this one offers some modestly unusual features. 100 color and 400 b&w photos. (Nov.)
Copyright © Reed Business Information, a division of Reed Elsevier Inc. All rights reserved. --This text refers to an out of print or unavailable edition of this title.

The French defeat at the hands of the Nazis in June 1940 began a period of occupation and deprivation; four years later, the dawn landings of Allied forces on the beaches of France began la Bataille de Normandie—the epic Battle of Normandy—rekindling hopes for liberation. The grandfather of author Dominique François, like many Frenchmen, dreamt of revenge, but did not live to see his country freed from the Nazis.

Normandy is the result of ten years of research by François, drawing on French and U.S. military archives as well as numerous photographs from his family’s collection that capture the hardships of occupied France. From the invasion to the breakout, Patton’s charge through France, and finally de Gaulle’s triumphant return to Paris, the Battle of Normandy was won at a terrible price. Normandy covers all aspects of this turning point in World War II and includes more than 500 images, many never before published, as well as eleven detailed color maps of the beach landings, battle plans, and German and Allied operations and troop movements.

--This text refers to an out of print or unavailable edition of this title.

Easton Press, Norwalk CT. 1989 Keith Sward "The Legend of Henry Ford" Limited Edition. As New, sealed without any flaws.  The Library of Great Lives Collector's notes by the...