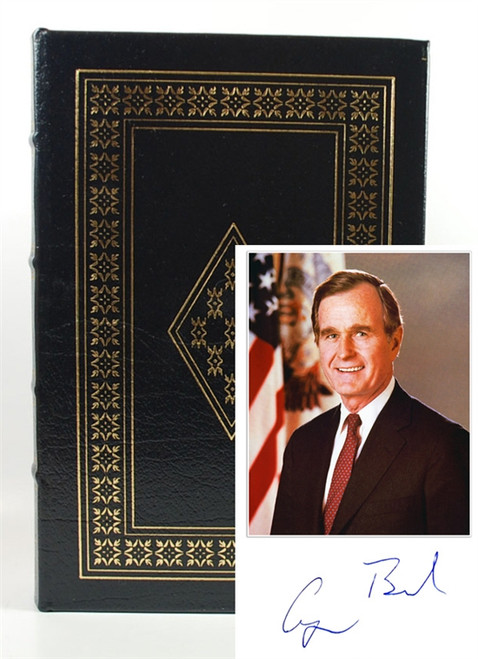 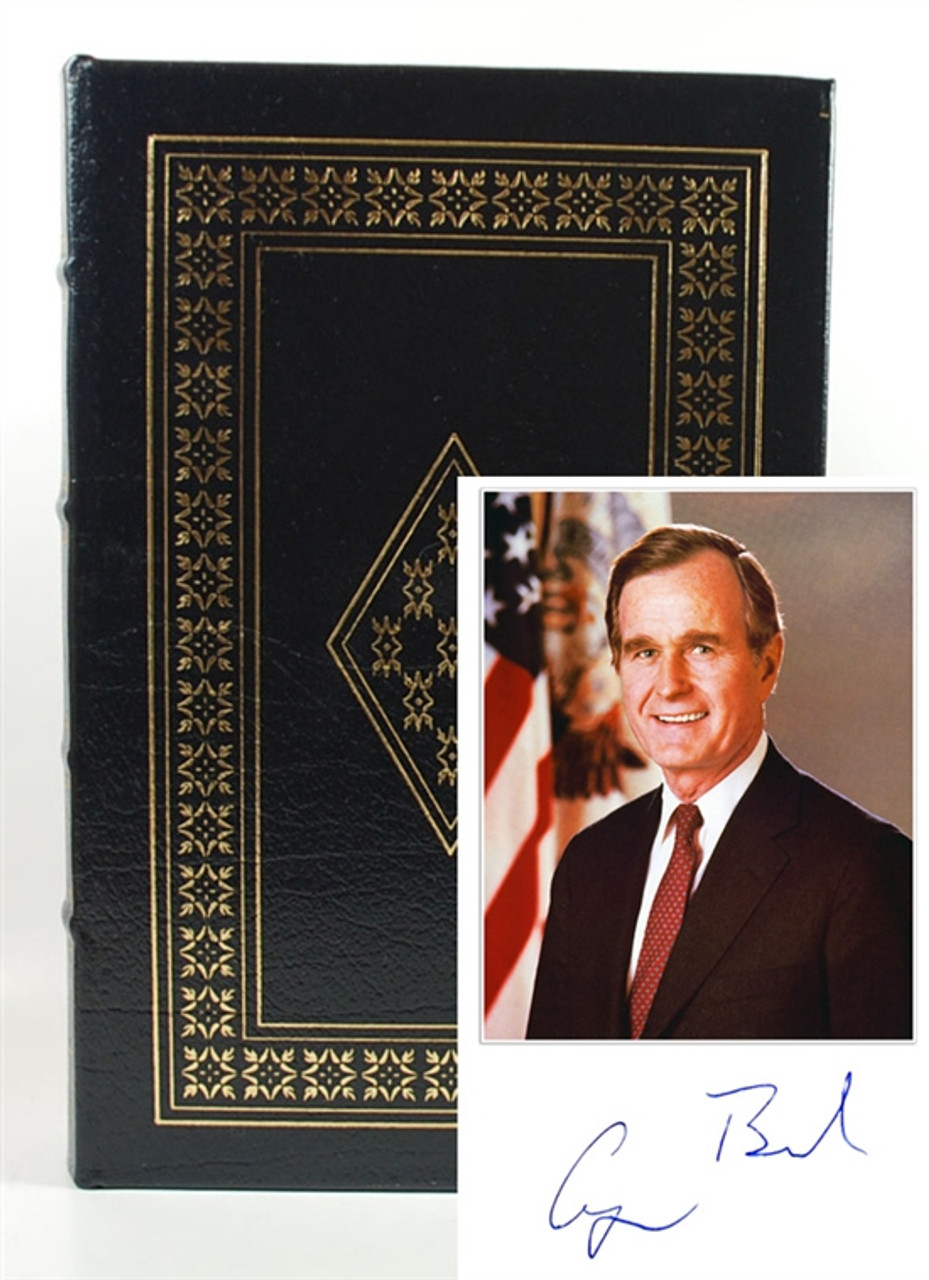 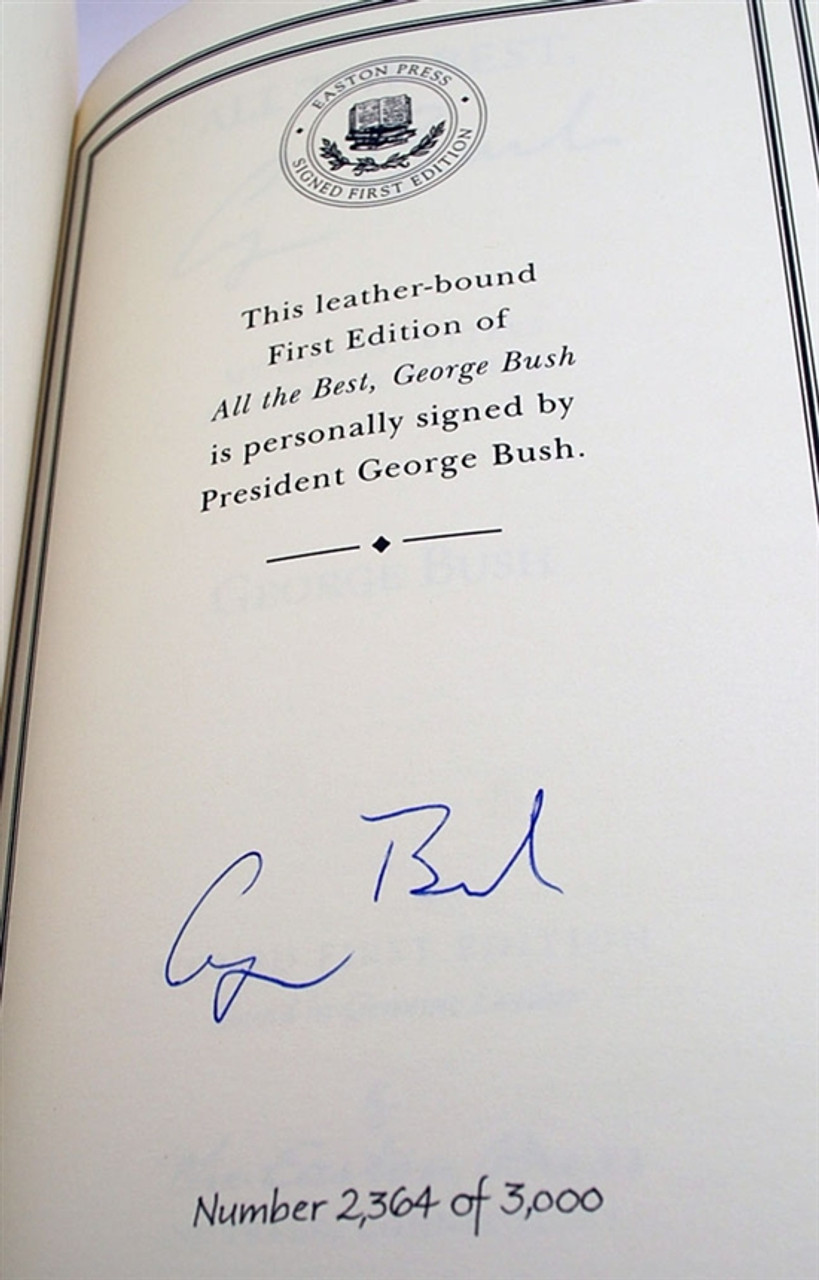 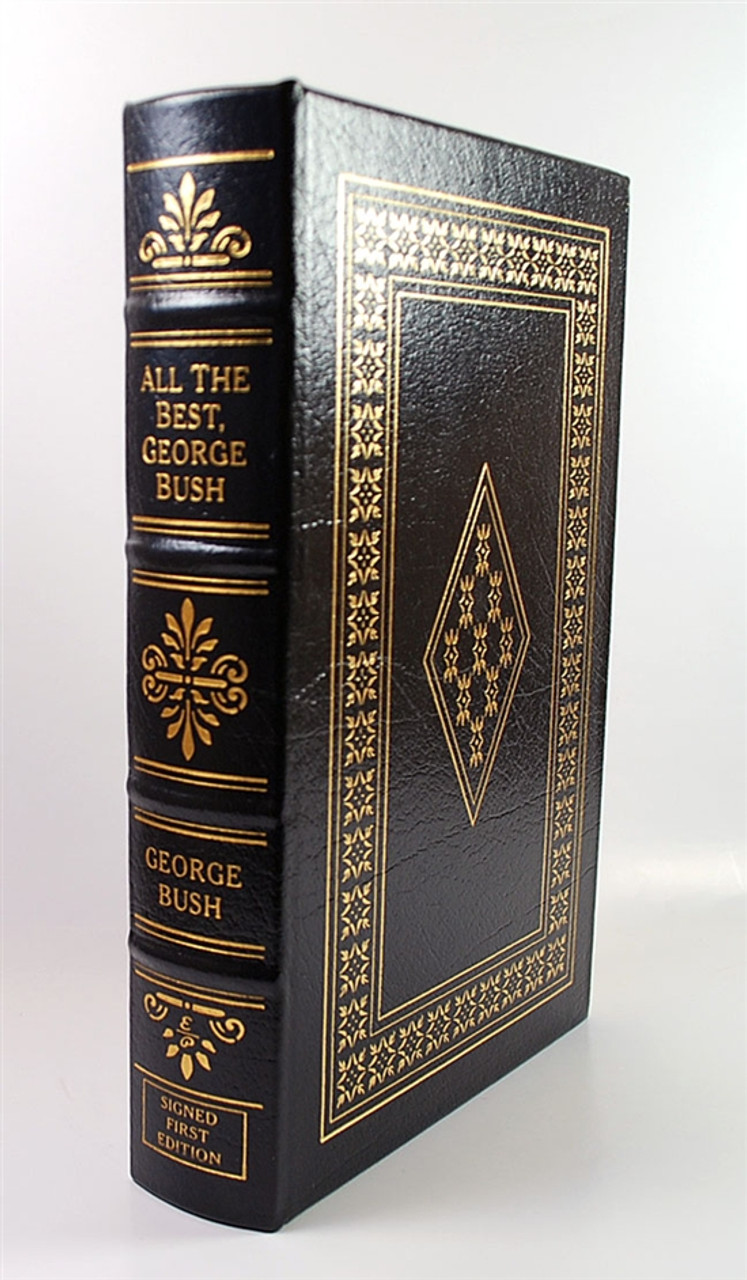 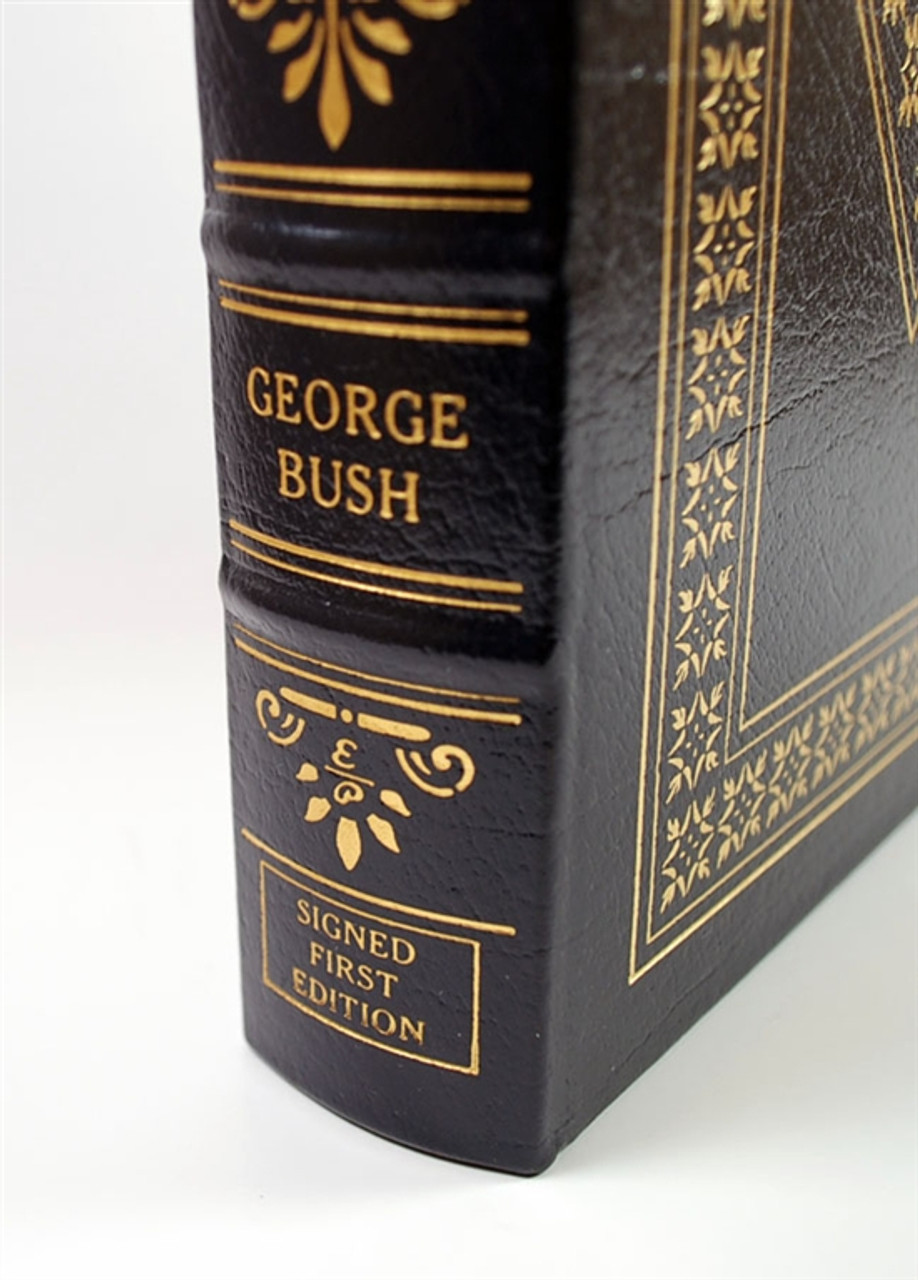 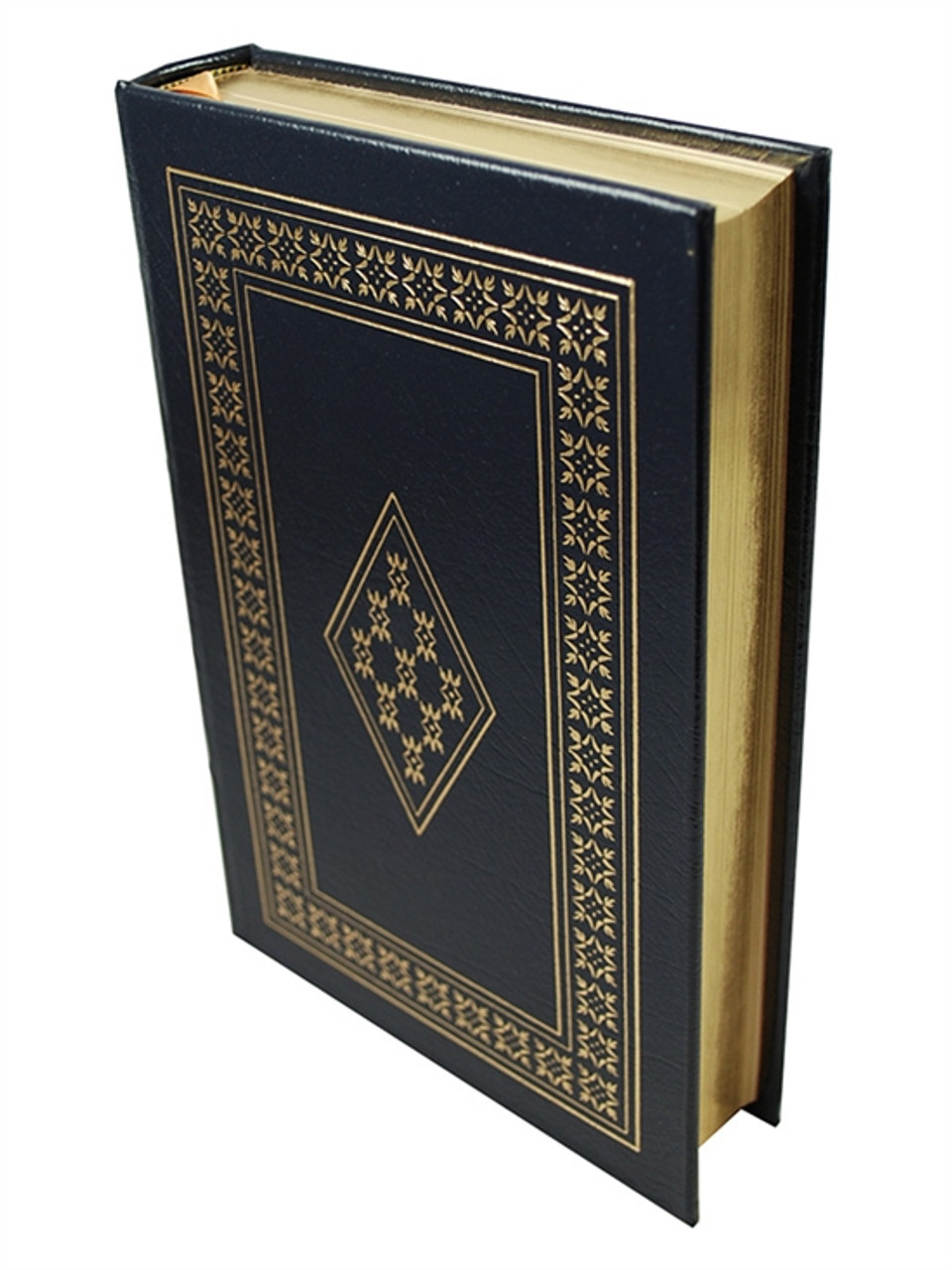 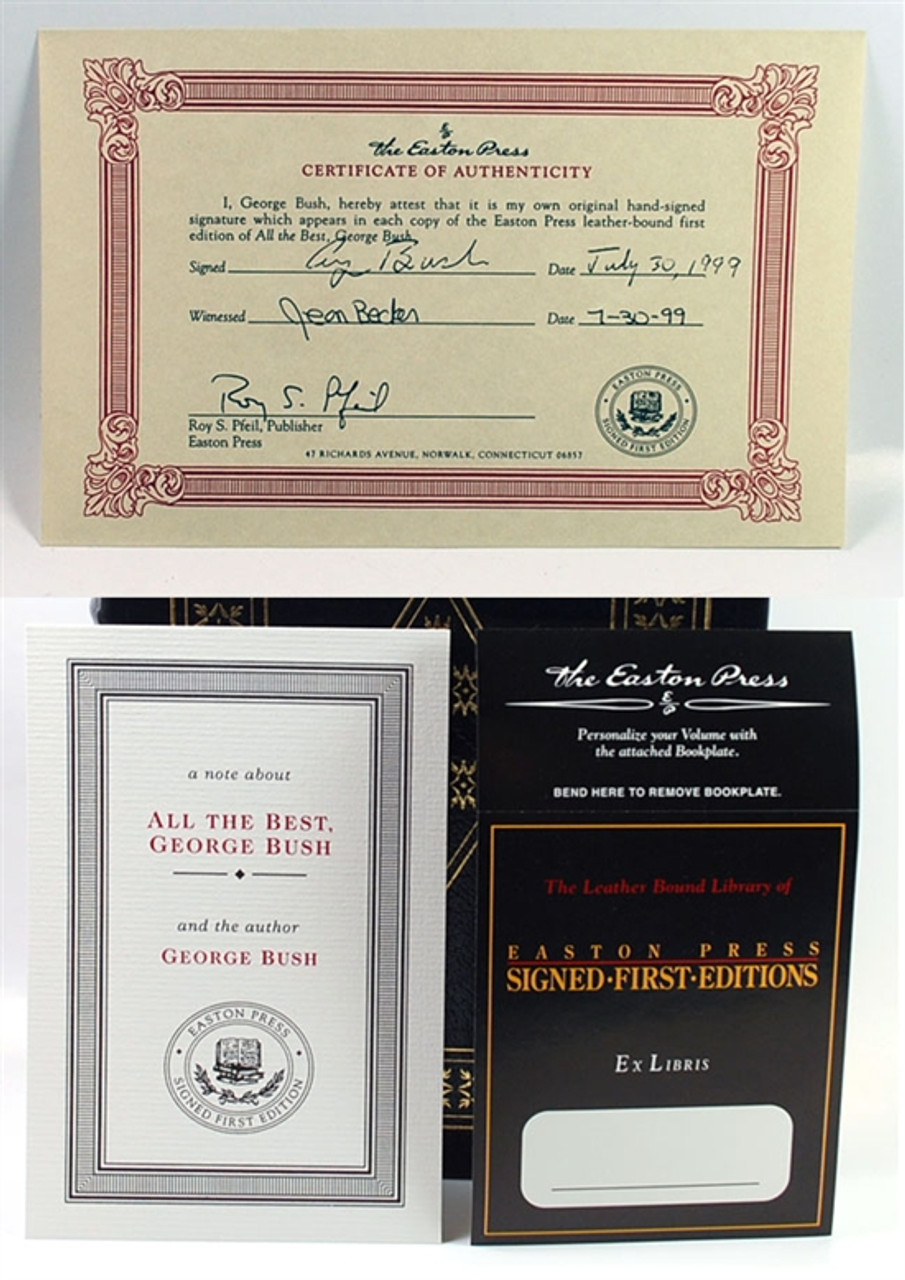 This signed first edition has been personally signed by President George H.W. Bush directly into the book onto the special limitation page.

"The travelogue of an observant man with much mettle and an open heart....His writings cover affairs of state and affairs of spaniels on equal footing. He is modest and gracious. But these short takes on a long life reveal an underlying, consistent sense of duty to office, family and morality." - People Magazine

A luxurious leather bound collectible to showcase in your presidential library.

Easton Press Norwalk, CT. 1999. "All the Best, George Bush: My Life in Letters and Other Writings". Signed First Edition. Full genuine leather. The true First Edition and first printing of this title, a signed limited edition of only 3,000 signed and numbered copies. Beautiful dark blue leather binding. Includes Certificate of Authenticity, collector notes, and an extra unattached "Signed First Edition" bookplate for your own personalization.

Condition: Sealed. As New. No markings, writings, or stamps. The condition is of the highest quality. No bookplates attached or signs of any removed. Includes original publisher issued Certificate of Authenticity, collector notes, and unattached bookplate for your own personalization.

In lieu of a memoir, All the Best, George Bush collects correspondence and diary entries from the former U. S. President to show, as he says, "what my own heartbeat is, what my values are, what has motivated me in life. " The letters begin in 1942--when, fresh out of high school, Bush volunteered for U. S. Navy flight school--and continue to the brink of the 21st century, as the retired chief executive worries about the Melissa virus infecting his office's server and keeping his visiting grandchildren in line. ("I realize, " he muses, "Keep the freezer door closed from now on and I mean" it lacks the rhetorical depth of "This will not stand" or "Read my lips". ")

All the Best hits all the highlights of Bush's career, from the Texas oil business to his role as ambassador to China, then CIA director, vice president under Ronald Reagan, and finally president himself. Along the way, he reveals a personality that is at turns compassionate, respectful, silly, doting, and resolute--a man for whom being a father and a grandfather matters as much as, and maybe even more than, being leader of the free ...

George Herbert Walker Bush (born June 12, 1924) served as the forty-first President of the United States from 1989 to 1993. Bush held a multitude of political positions prior to his presidency, including Vice President of the United States in the administration of Ronald Reagan (1981-989) and director of the Central Intelligence Agency (CIA). Bush was born in Massachusetts to Senator Prescott Bush and Dorothy Walker Bush. Following the attacks on Pearl Harbor in 1941, at the age of 18, Bush postponed going to college and became the youngest naval aviator in US history. He served until the end of the war, then attended Yale University.

Graduating in 1948, he moved his young family to West Texas and entered the oil business, becoming a millionaire by the age of 40. He became involved in politics soon after founding his own oil company, serving as a member of the House of Representatives, among other positions. He ran unsuccessfully for president of the United States in 1980, but was chosen by party nominee Ronald Reagan to be the vice presidential nominee; the two were subsequently elected. During his tenure, Bush headed administration task forces on deregulation and fighting drug abuse. In 1988, Bush launched a successful campaign to succeed Reagan as president, defeating Democratic opponent Michael Dukakis.

Foreign policy drove the Bush presidency; operations were conducted in Panama and the Persian Gulf at a time of world change; the Berlin Wall fell in 1989 and the Soviet Union dissolved two years later. Domestically, Bush reneged on a 1988 campaign promise and raised taxes amidst a struggle with Congress. In the wake of economic concerns, he lost the 1992 presidential election to Democrat Bill Clinton. Bush is the father of George W. Bush, the 43rd President of the United States, and Jeb Bush, former Governor of Florida.

VERY FINE Guaranteed. Sealed. A wonderful bright clean copy free of any markings, writings, or stamps. Sharp corners that have not been bumped. Unread book with square and tight binding. No bookplates attached or indication of any removed. The gilded page edges are free of any marks, scratches, or blemishes. Includes COA and collector's noted by the publisher.