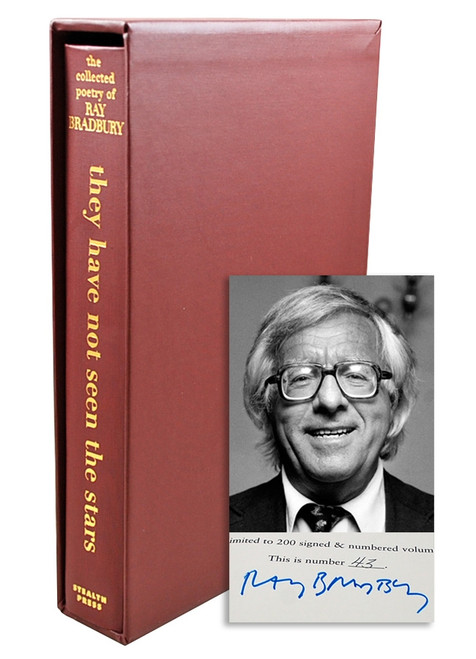 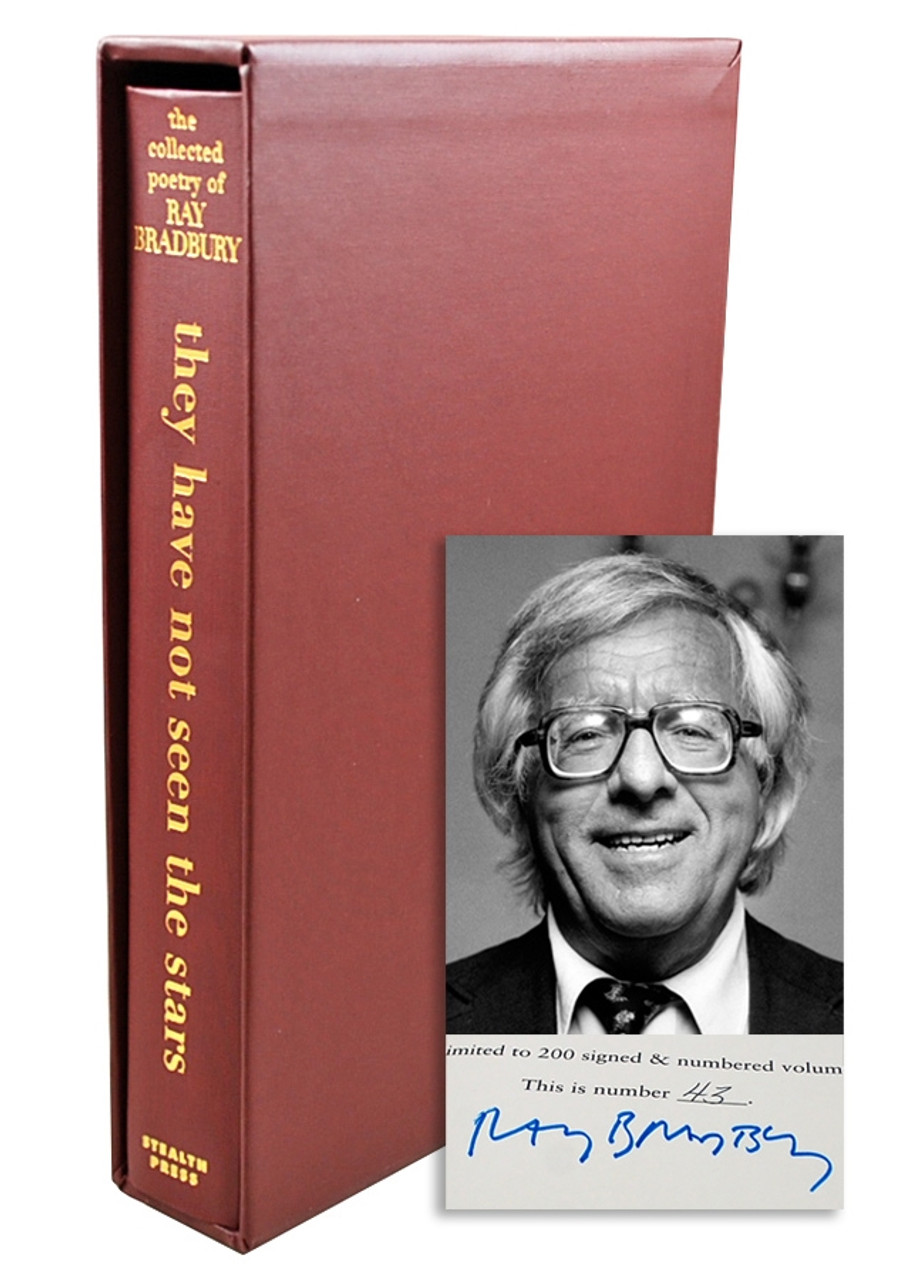 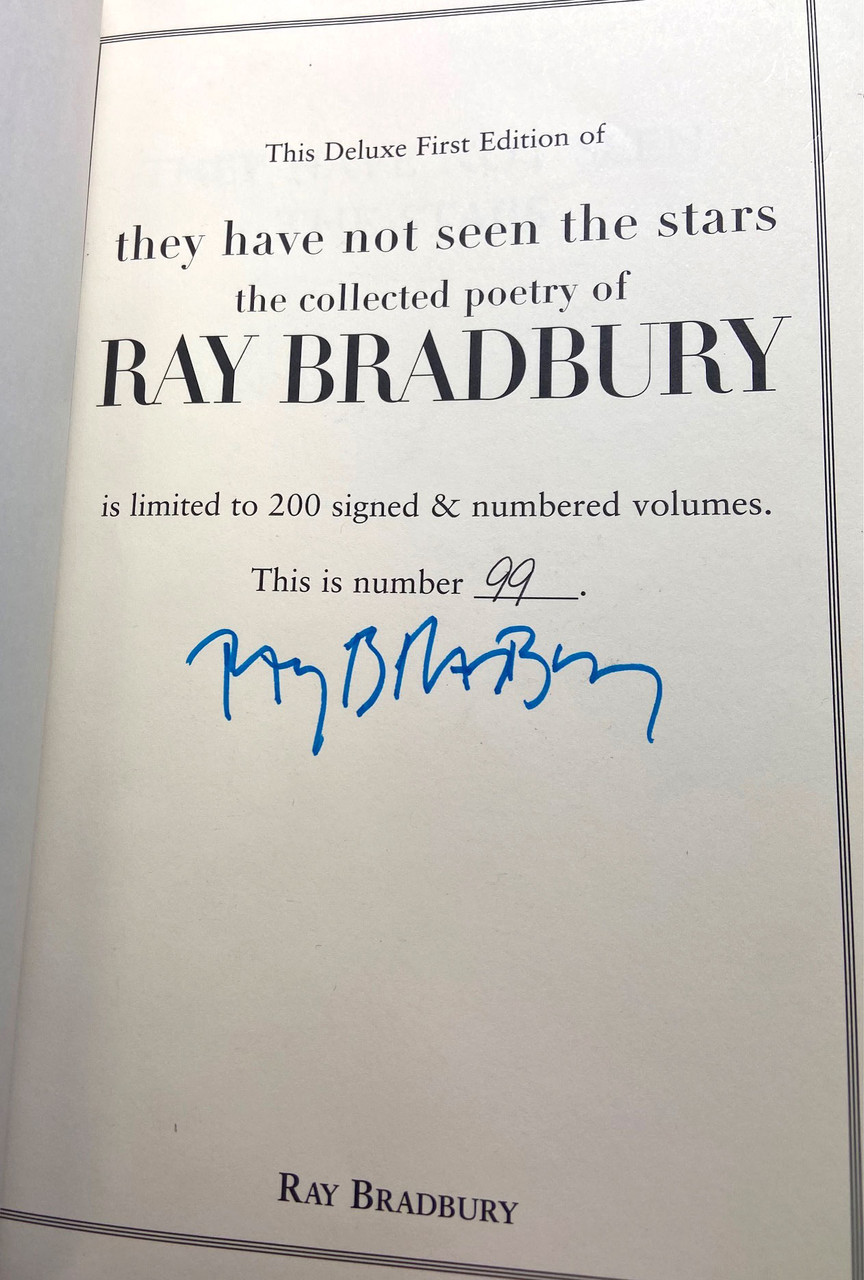 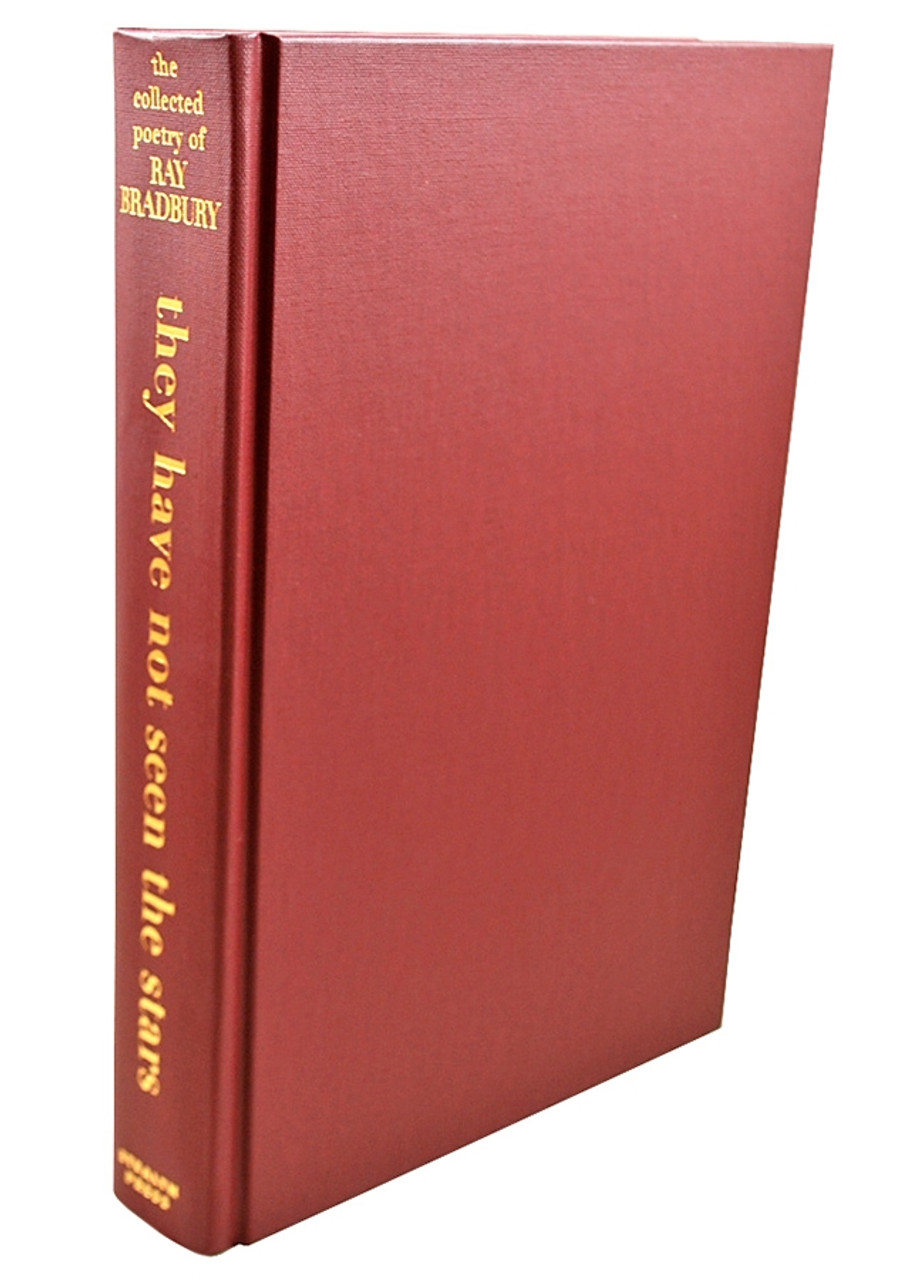 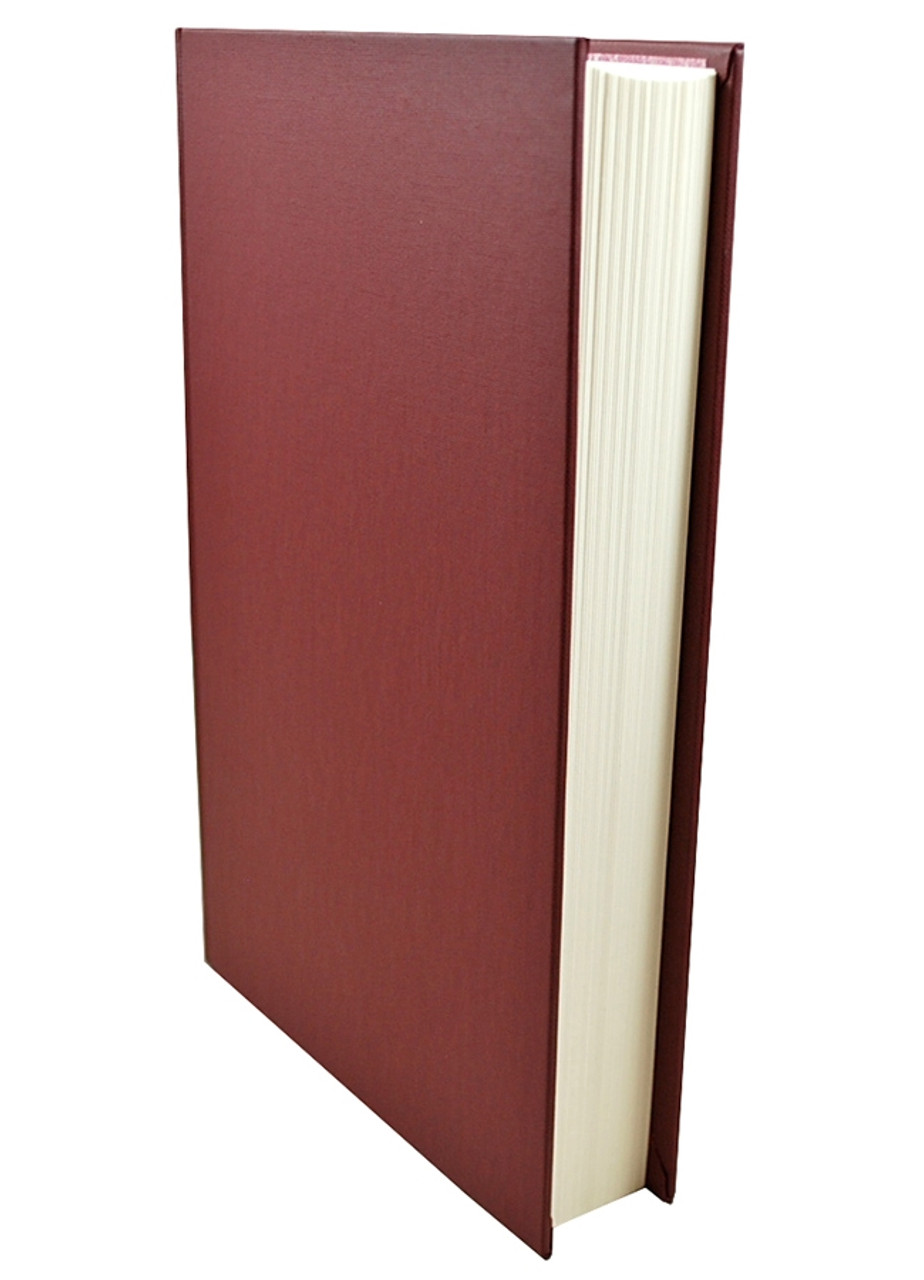 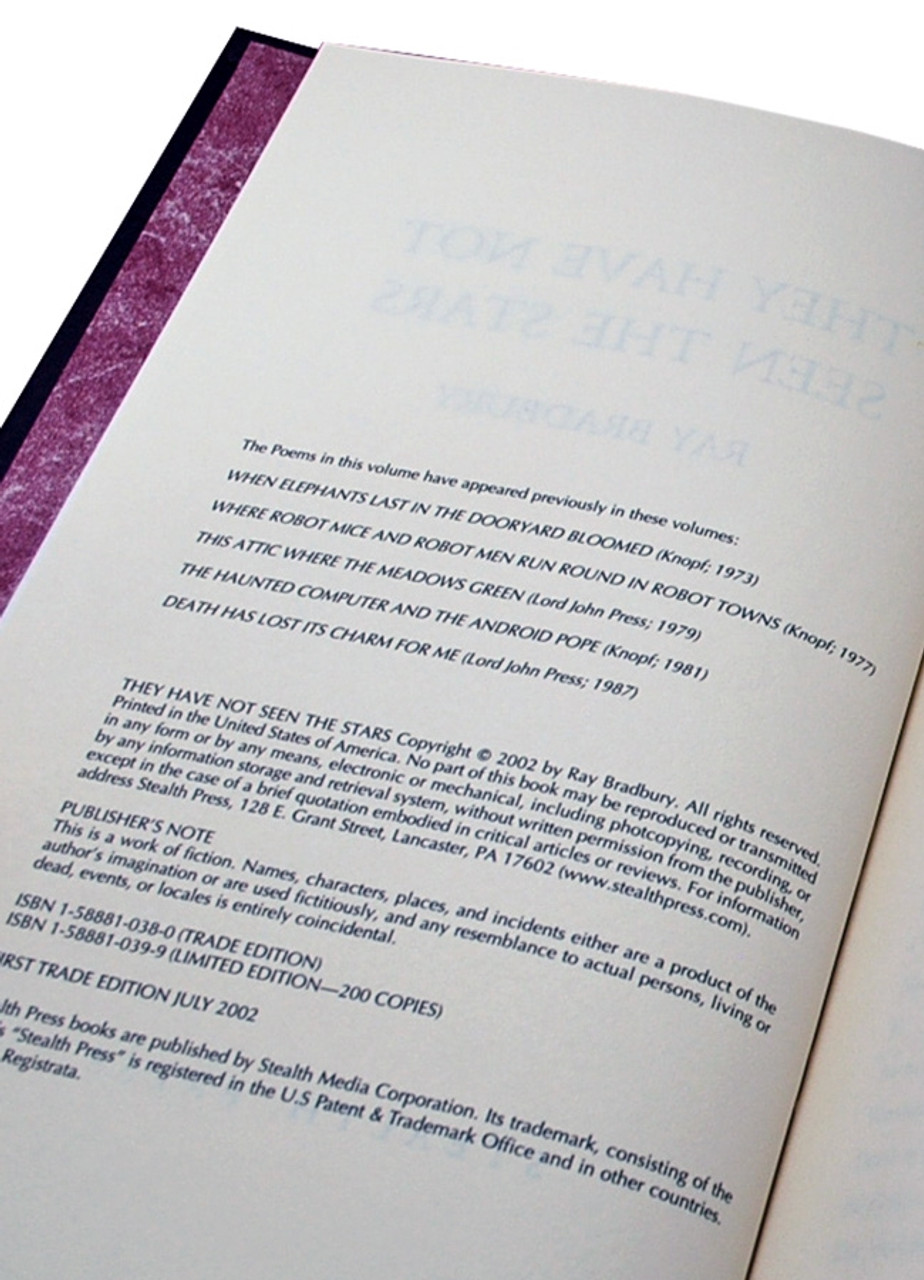 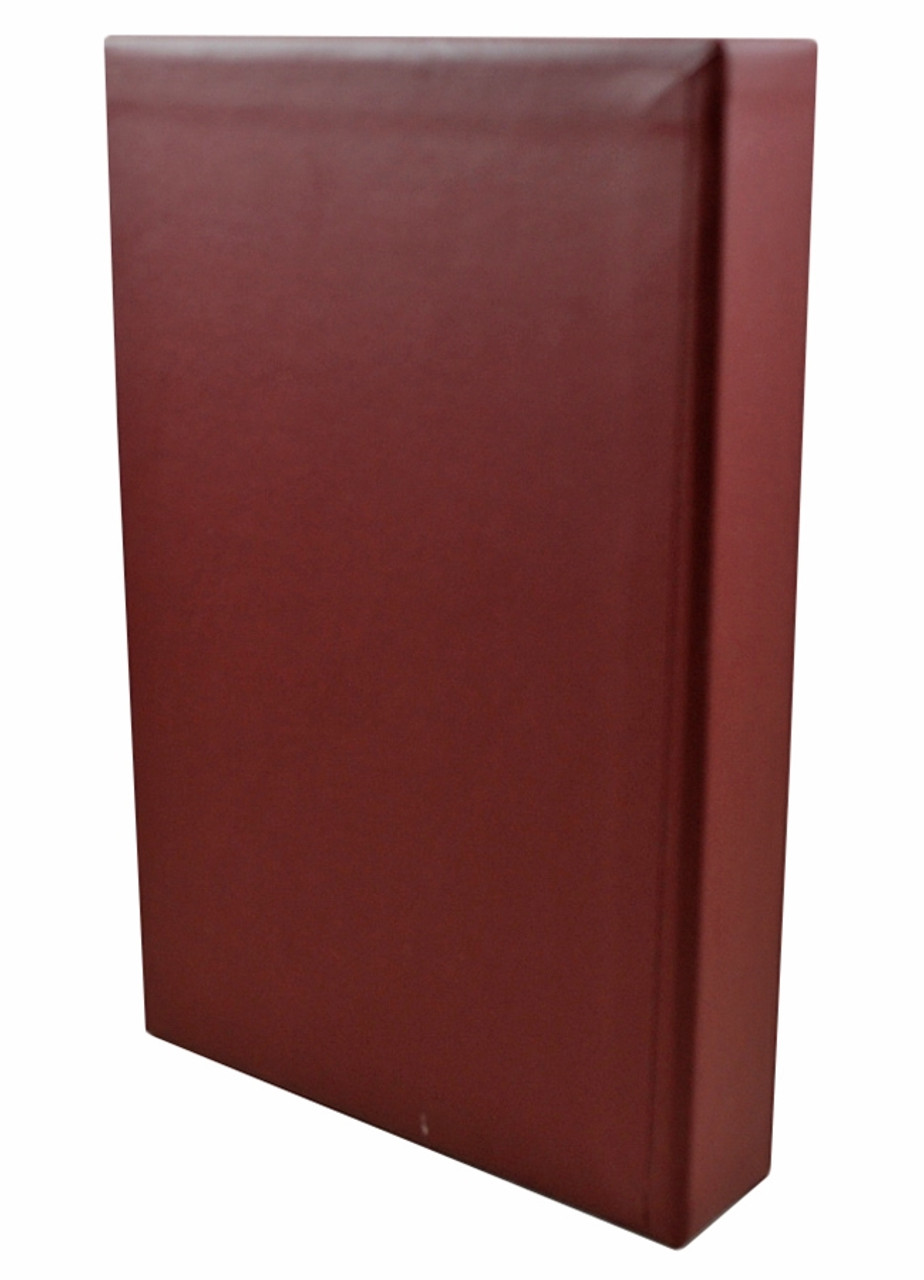 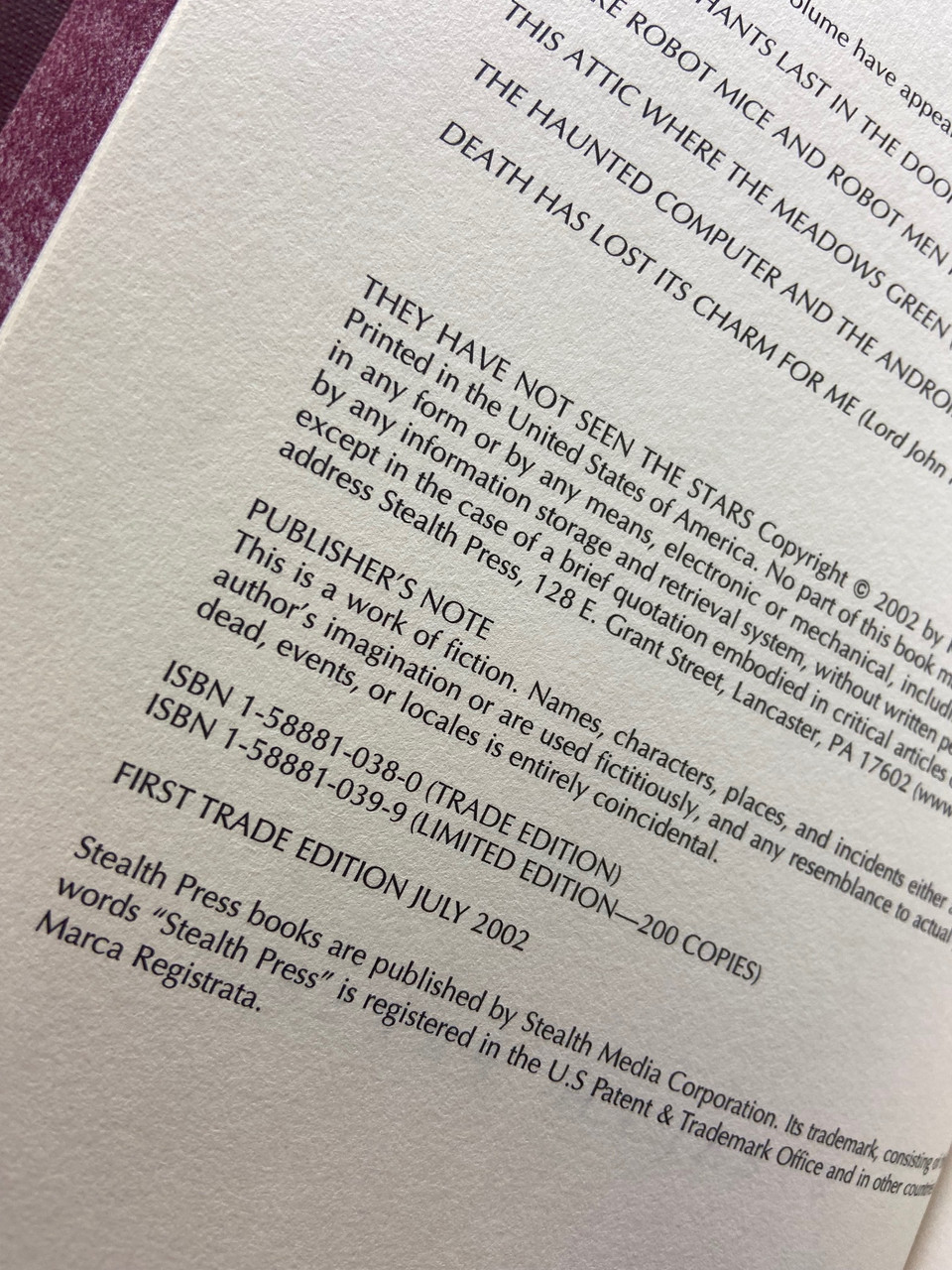 Personally signed by Ray Bradbury. Signed Limited Edition No. 99 of only 200.

Stealth Press 2002. Ray Bradbury "They Have Not Seen The Stars: The Collected Poetry of Ray Bradbury". Deluxe First Edition. Signed limited edition of only 200. Personally signed by Bradbury directly onto the limitation page of the book. First trade edition, July 2002 as stated on the copyright page. No dust-jacket as issued. Slipcased.

The eminence of Ray Bradbury in American literature is beyond question. For more than half a century now his short stories and novels -- and the television shows and movies drawn from them -- have delighted and inspired generations. His prose and the worlds he wove from it have captured the hearts and imaginations of millions throughout the world. But the man who brought us Montag the book-burning fireman of Fahrenheit 451, who captured lost summers in Dandelion Wine and the darkening autumnal tones of late boyhood in Something Wicked This Way Comes, has always had another mistress: Poetry. As the author himself explains in the Foreword written especially for this volume -- a Foreword that is itself classic Bradbury in its nostalgic evocation of long-gone days and people -- poetry was his first literary love and for years he has been laying at her door the flowers of his imagination that comprise the marvelous contents of this book.

It seems inconceivable that there could still be little-known treasures in the work of such a celebrated wordsmith, yet treasures there are -- buried for too long but now rediscovered and brought back to the world in this first collected edition.

These poems have Bradbury's evergreen touch - accessible, humorous, quietly emotional. Now in his 80s, the master is feeling his age, as shown in "To Ireland...": "I cannot stand that haunted rain/ Where youngness melts away to sea." Rain reappears as a metaphor in "Dublin Sunday," where he and his wife sit glumly in their hotel, all plays sold out, a favorite pub locked. Most expressive is "Once the Years Were Numerous and the Funerals Few" ("Once the hours were years, now years are hours"). For all the gloom, Bradbury can't long restrain his usual luxuriating in the sensual wonder of life. "It's No-Excuses-Needed-For-Living Weather" discovers the beauty of the "storm-cleansed" land. In six economical lines, "Manet/Renoir" celebrates the varying approaches of these painters to depicting the female form. "When God in Loins a Beehive Puts" joyfully defines coming-of-age for boys. "Ahab at the Helm" takes Melville on a delicious parody of Thayer's "Casey at the Bat." The Bradbury who treasures memory emerges in "With Love," an account of his father's attempts to teach him to knot a tie, and "Byzantium I Come Not From," a paean to his Midwest origins. Bradbury fans, Hibernophiles, general readers, even some contemporary poetry snobs, will find this a lovely read. (Oct. 1, 2002)

Upon his death in 2012, The New York Times called Bradbury "the writer most responsible for bringing modern science fiction into the literary mainstream." The Los Angeles Times credited Bradbury with the ability ""to write lyrically and evocatively of lands an imagination away, worlds he anchored in the here and now with a sense of visual clarity and small-town familiarity." Bradbury's grandson, Danny Karapetian, said Bradbury's works had "influenced so many artists, writers, teachers, scientists, and it's always really touching and comforting to hear their stories". The Washington Post noted several modern day technologies that Bradbury had envisioned much earlier in his writing, such as the idea of banking ATMs and earbuds and Bluetooth headsets from Fahrenheit 451, and the concepts of artificial intelligence within I Sing the Body Electric.

Numbered signed limited edition, No. 99 of 200.
Slipcased Edition.
VERY FINE GUARANTEED. A wonderful bright clean copy free of any markings, writings, or stamps. Sharp corners that have not been bumped. Unread book with square and tight binding. No bookplates attached or indication of any removed. Edges are free of any marks, spots, scratches, or blemishes.