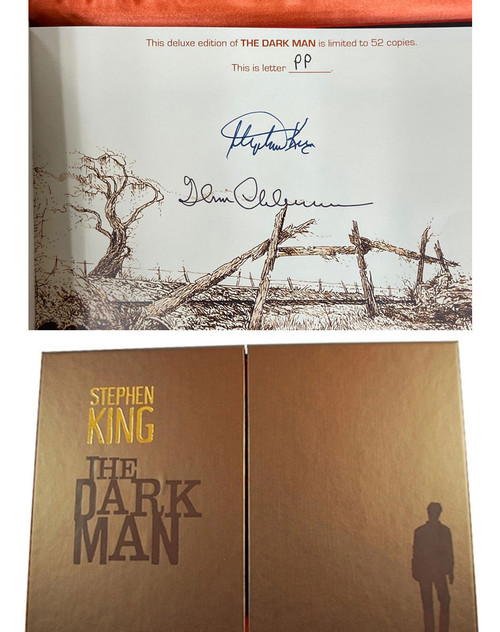 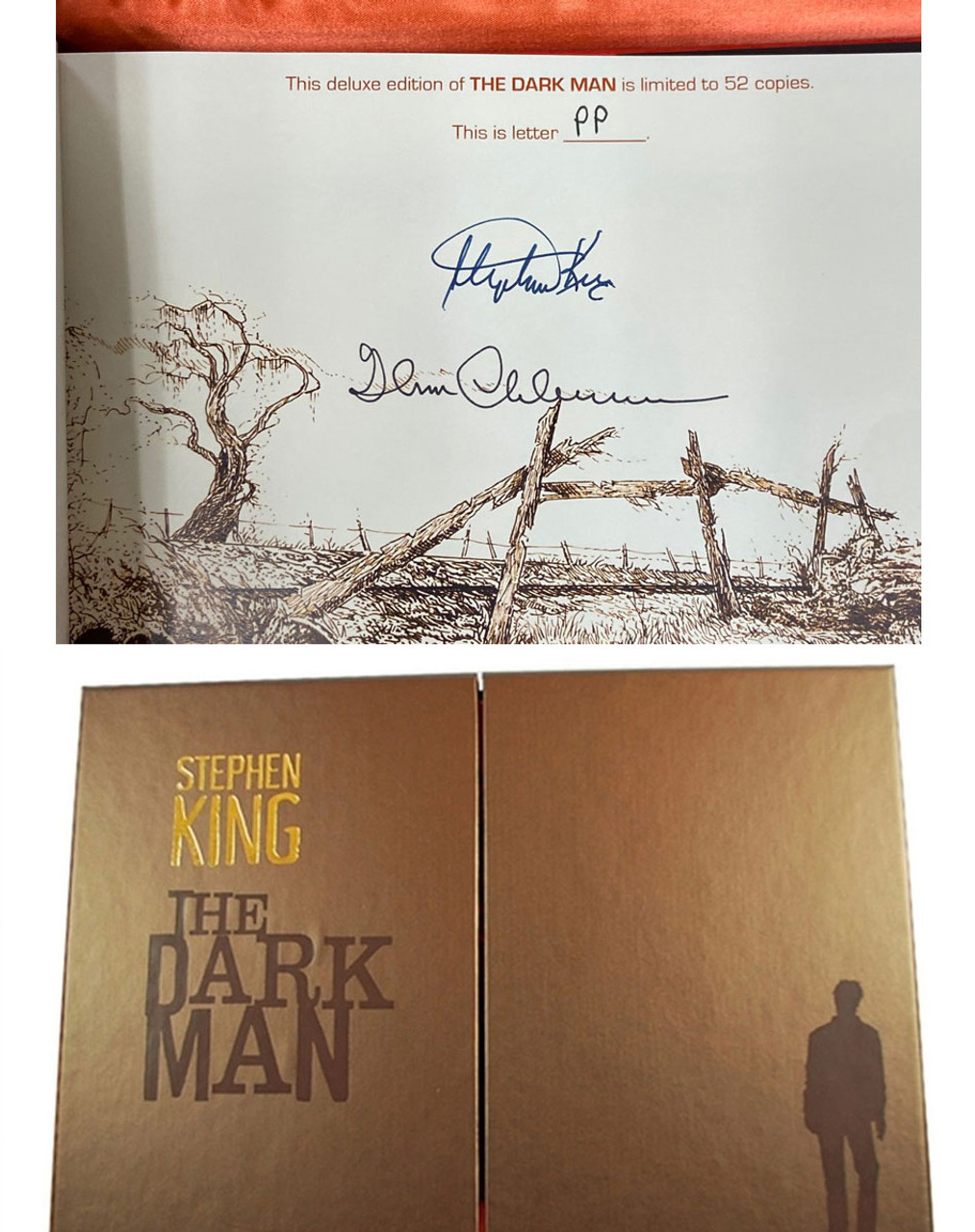 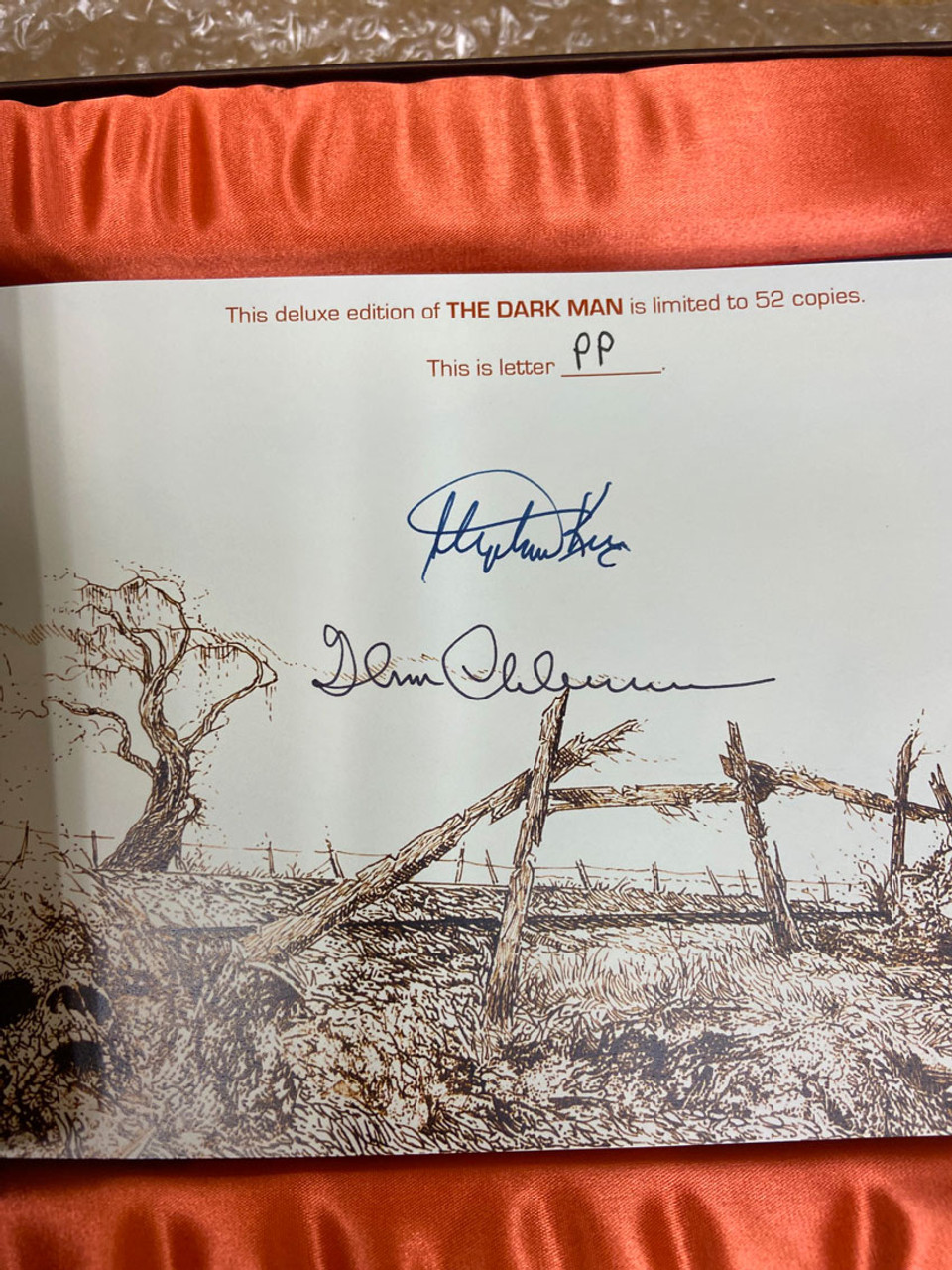 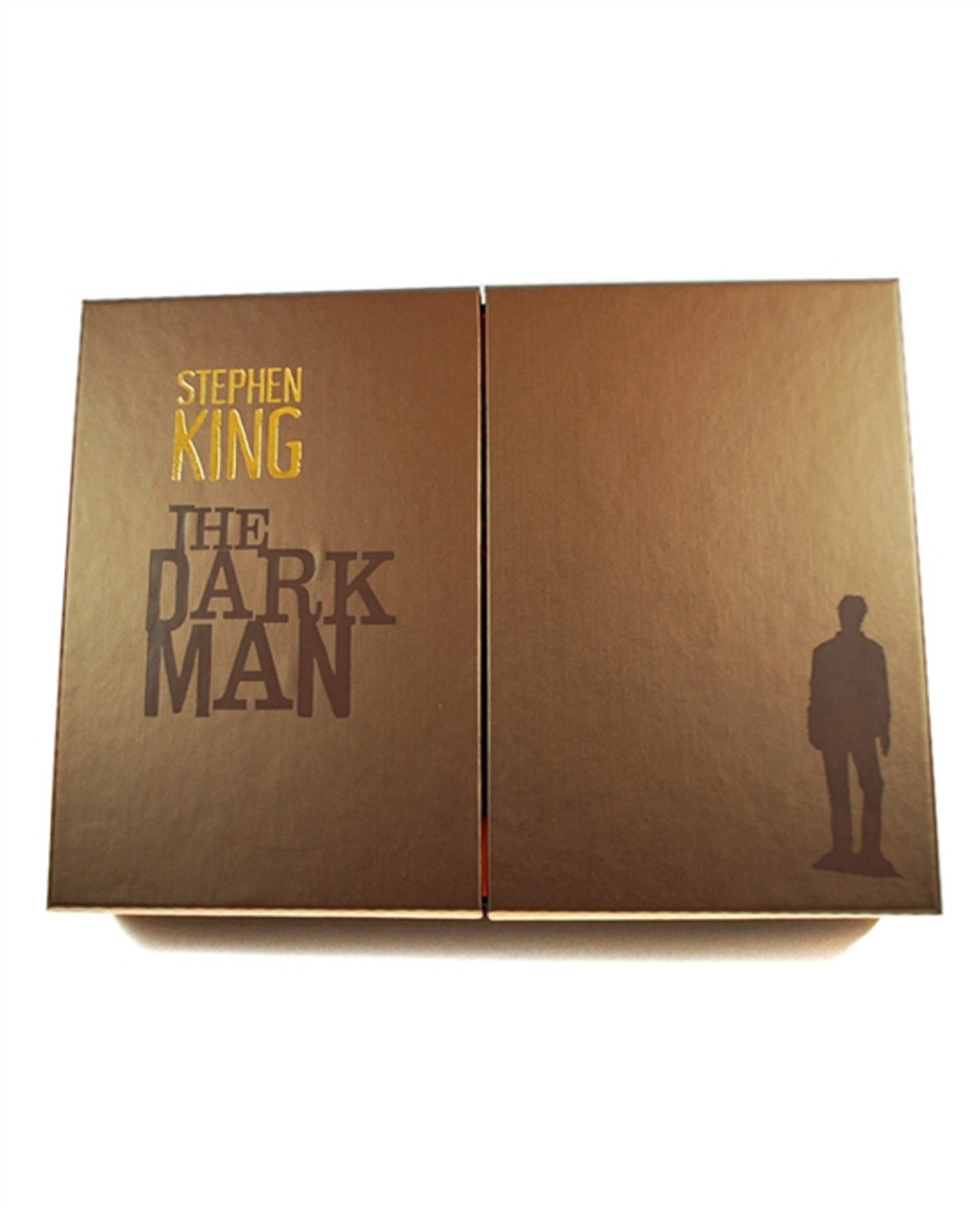 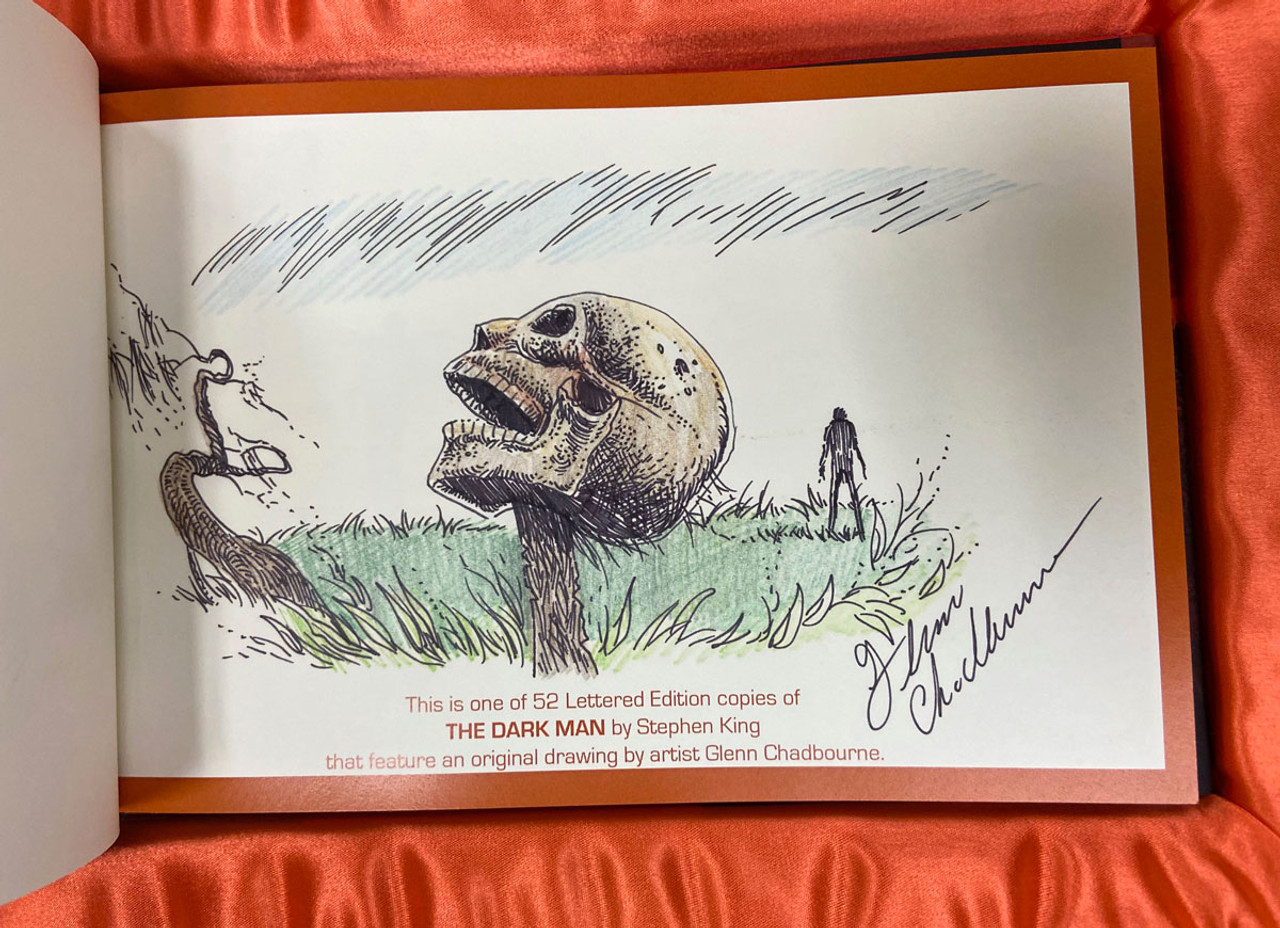 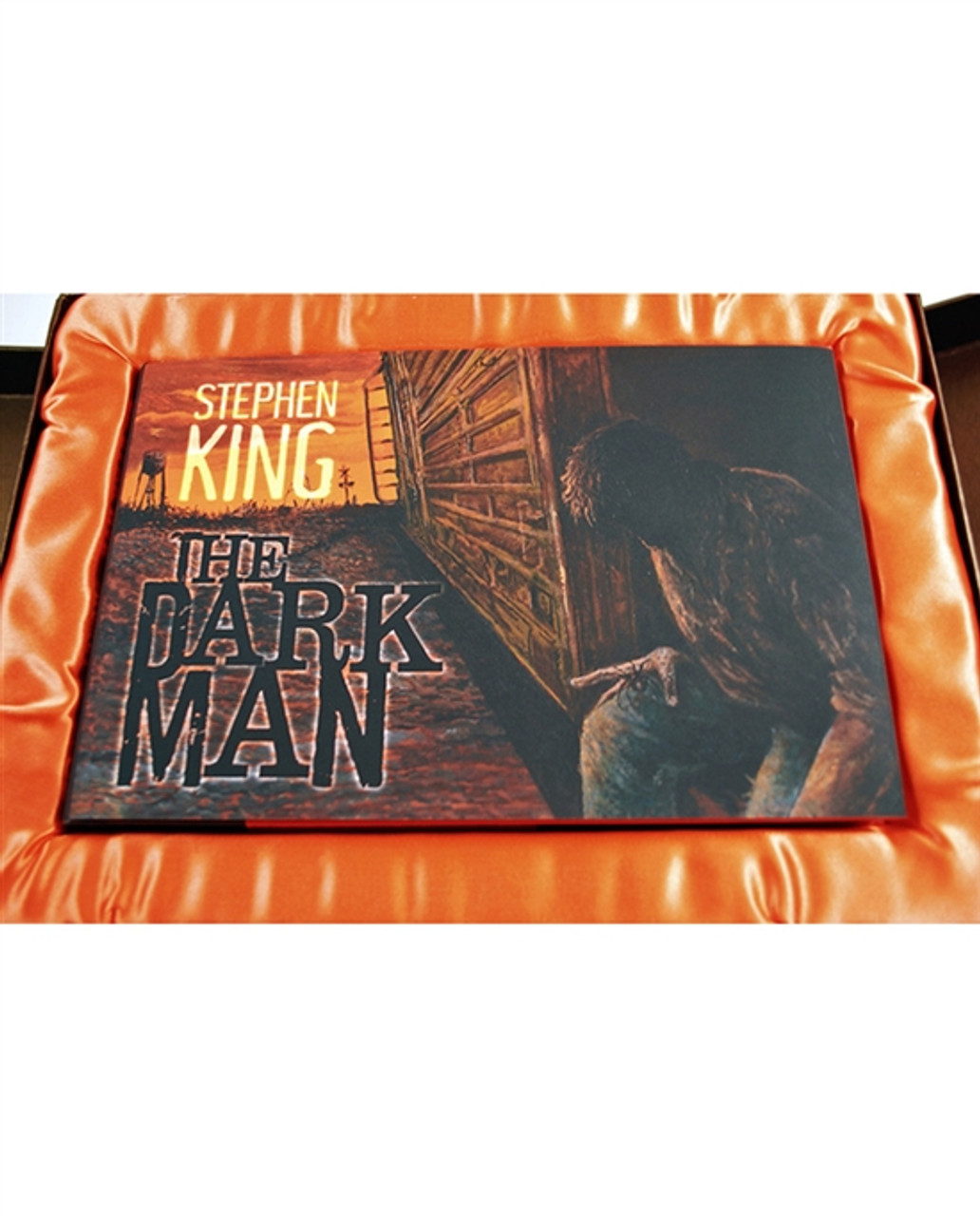 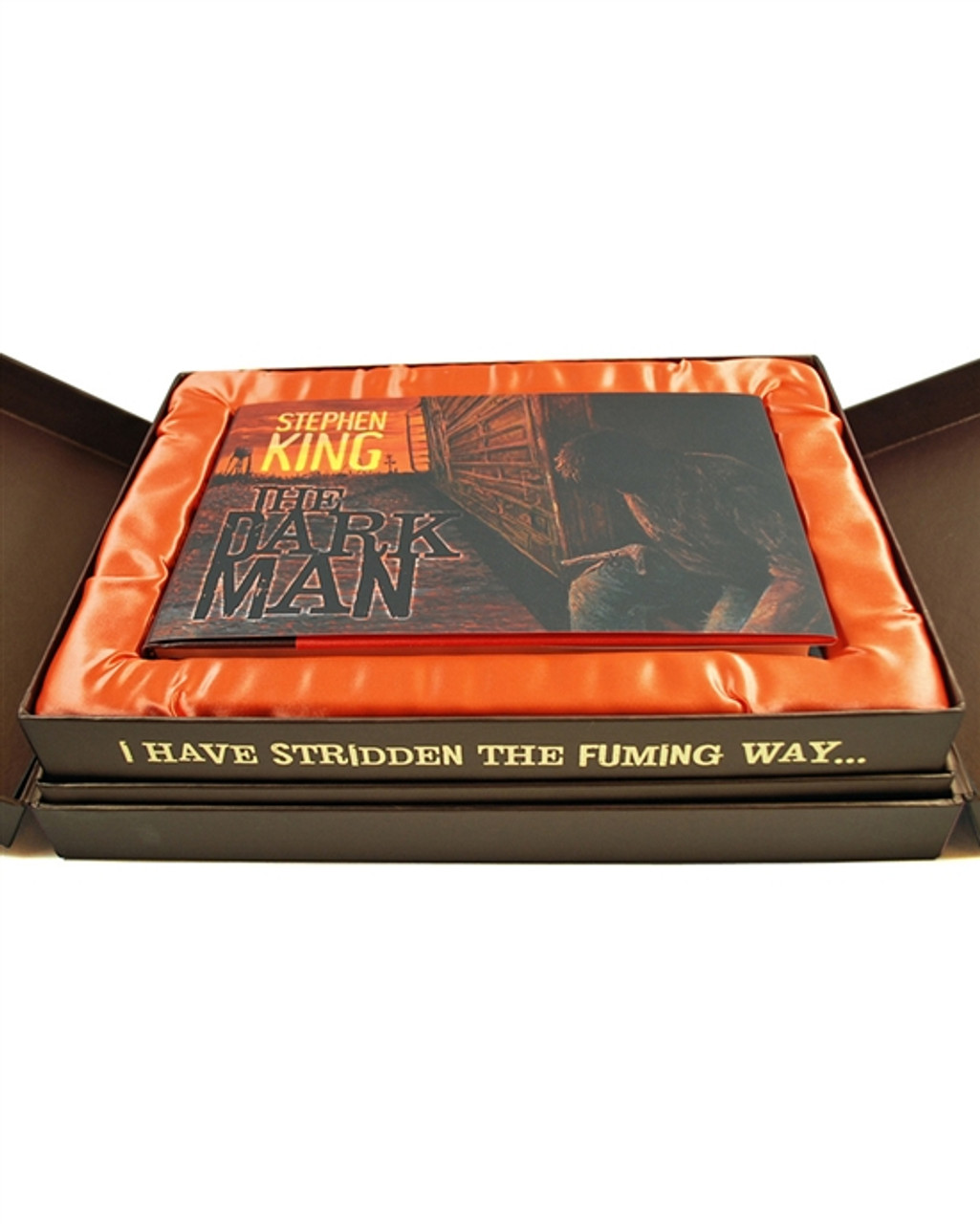 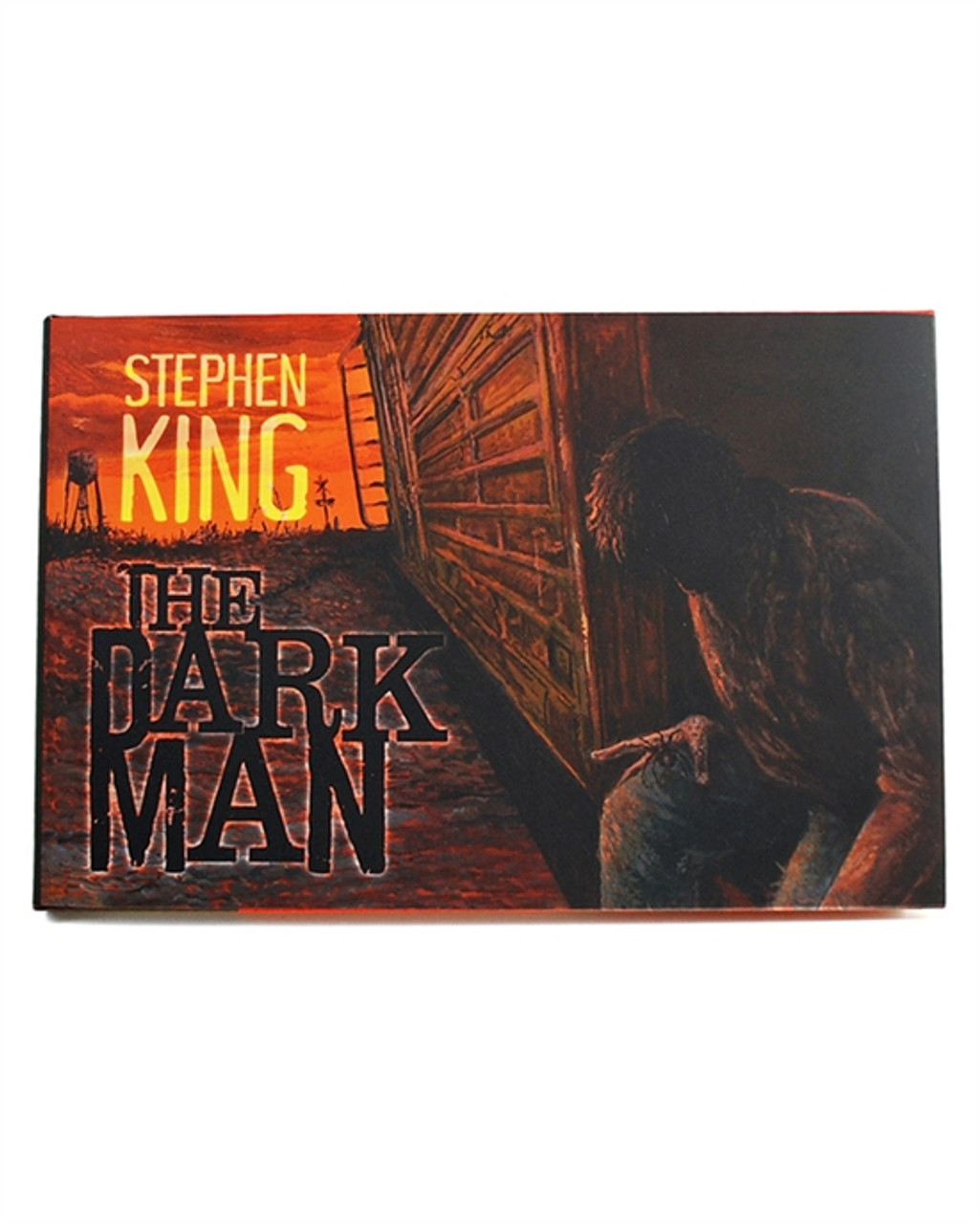 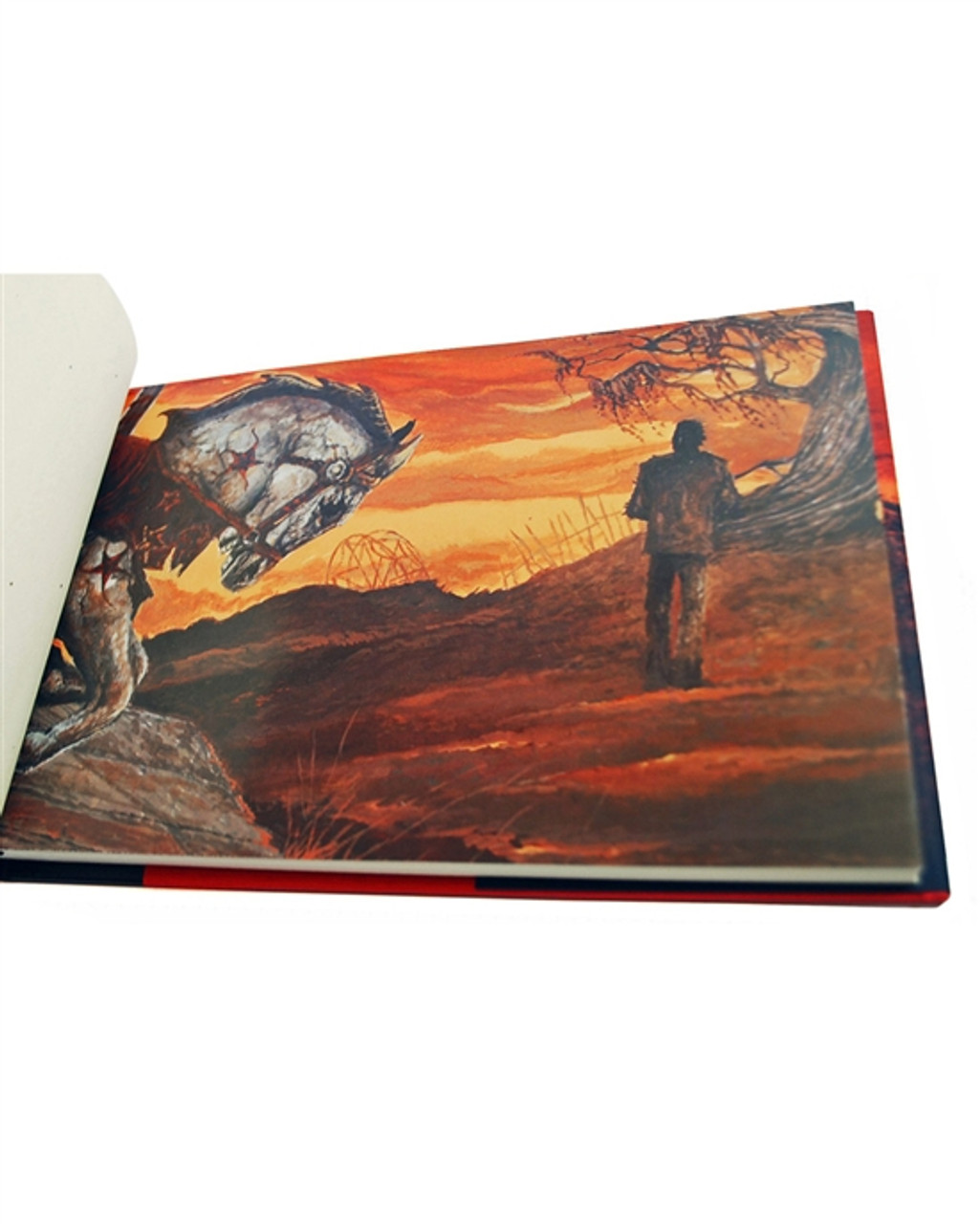 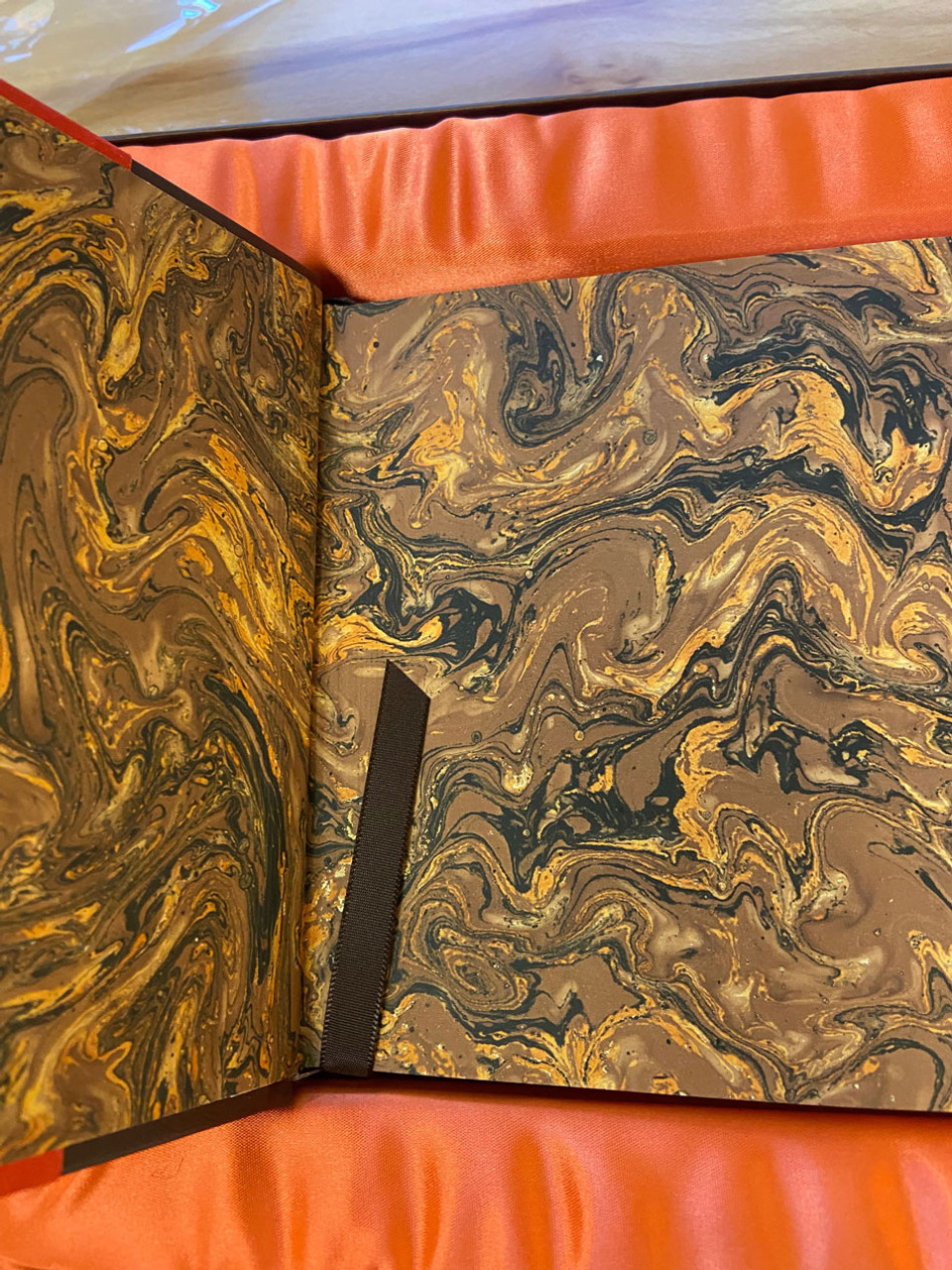 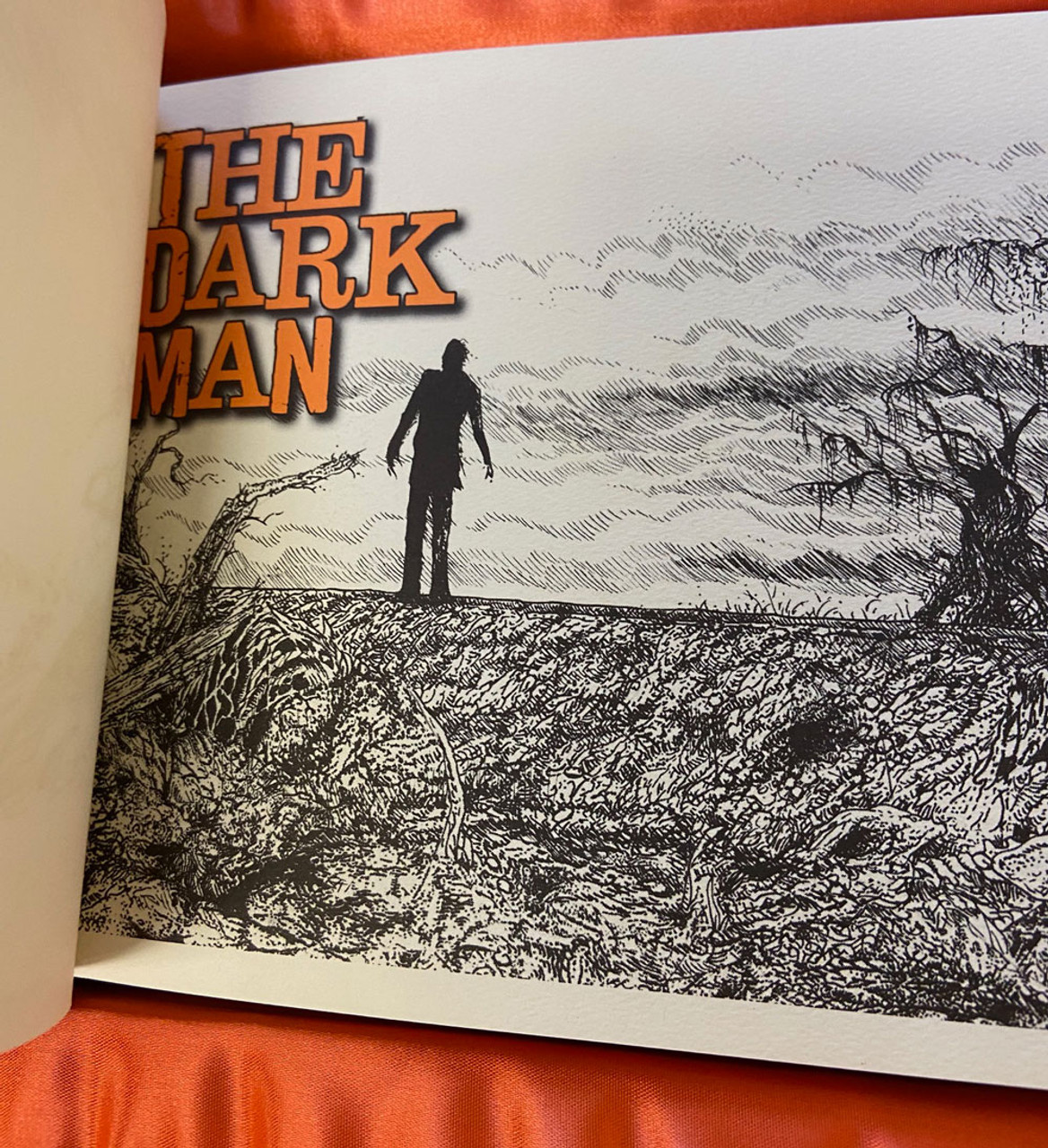 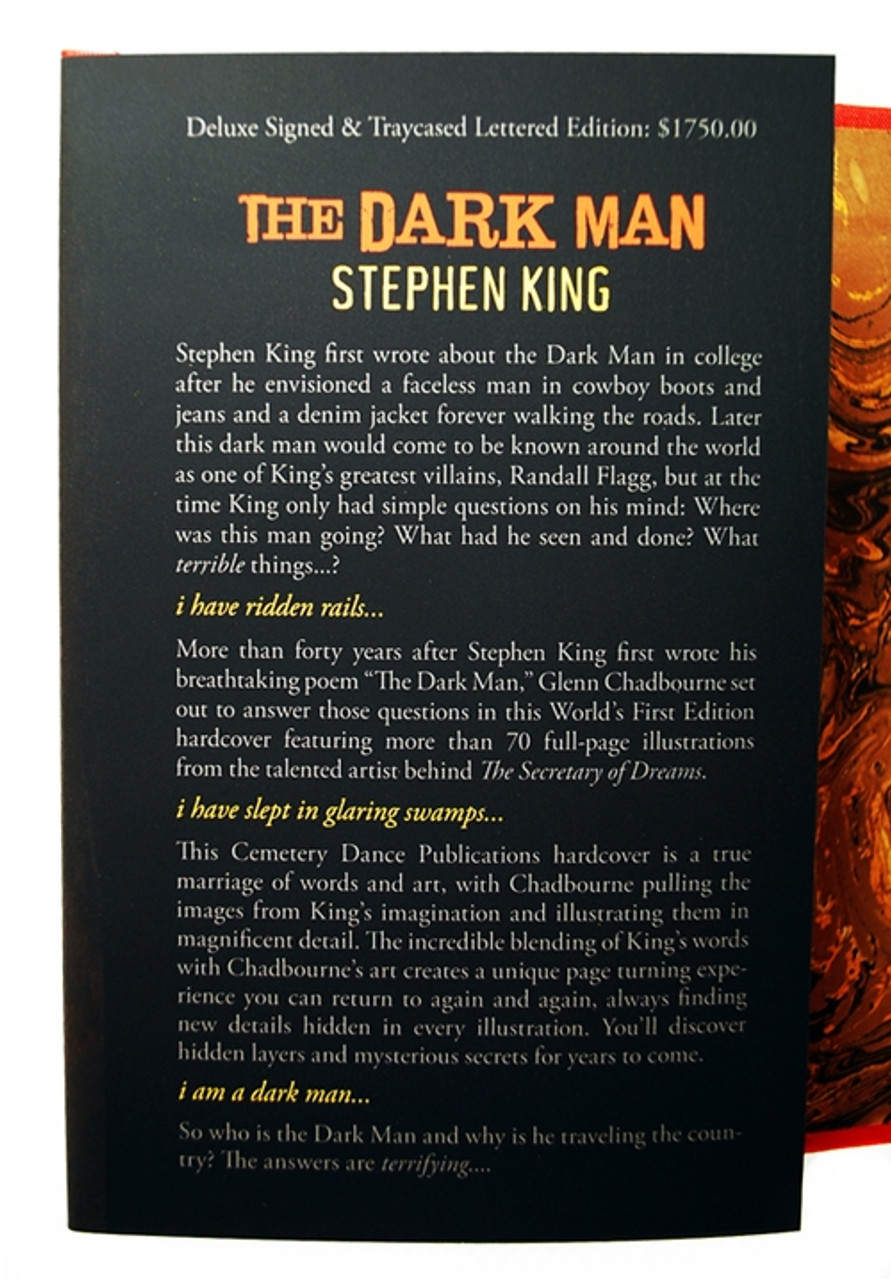 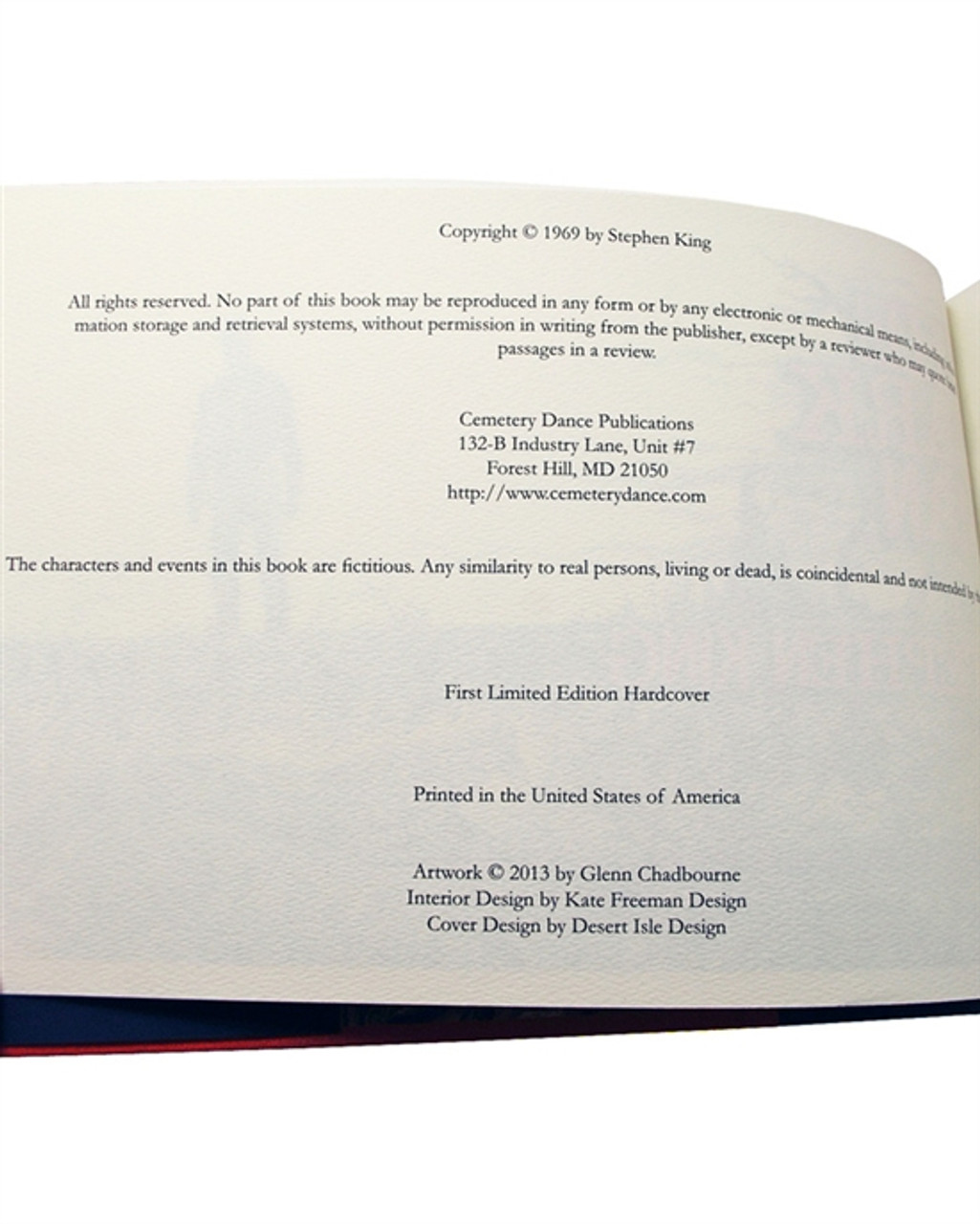 THIS IS LETTERED "PP" OF ONLY 52 PRODUCED 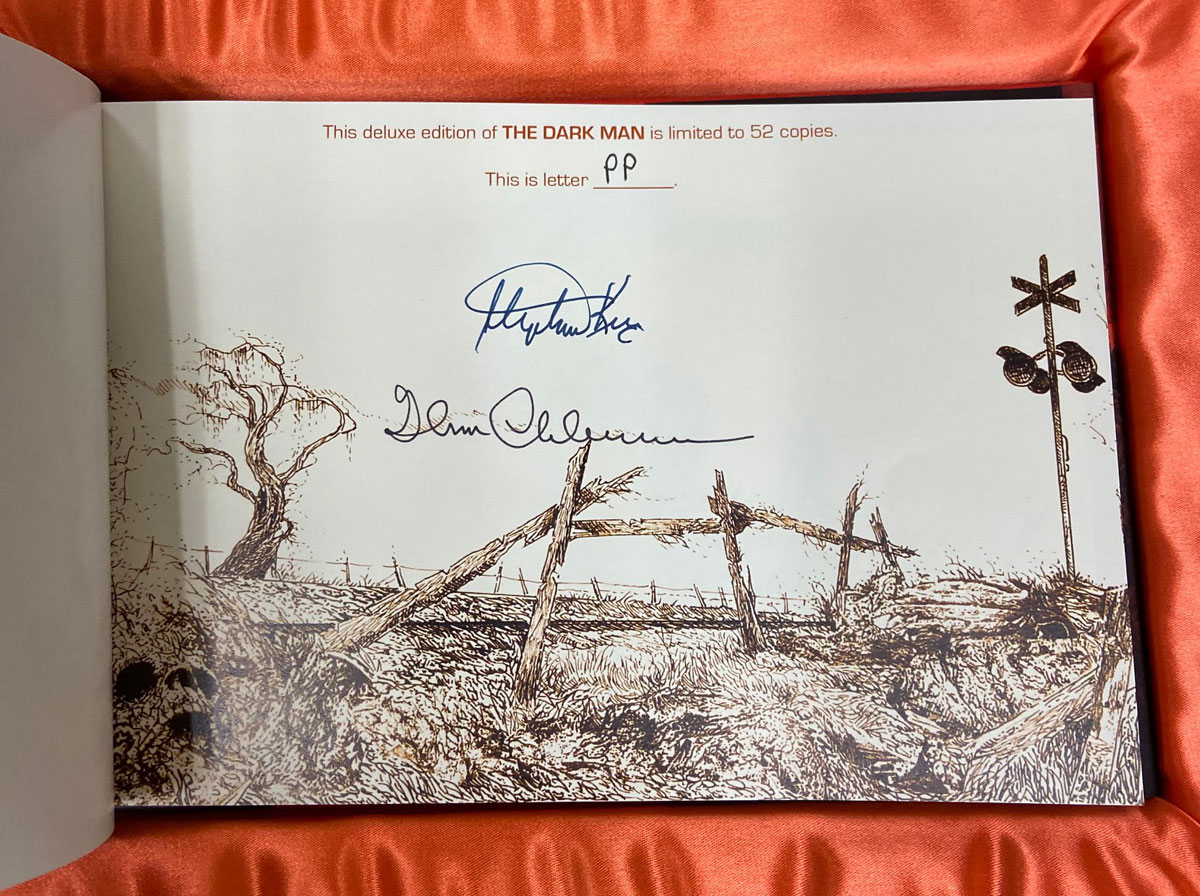 Cemetery Dance Publications 2013. "The Dark Man: An Illustrated Poem" by Stephen King. Signed Lettered Edition of only 52 copies printed in two colors on a specialty paper stock and bound in two different fine materials with gilded page edges. Signed by Stephen King and Glenn Chadbourne. This edition features a different dust jacket, a different color frontispiece, a satin ribbon page marker, imported endpapers, and a hand-drawn Dark Man illustration by Glenn Chadbourne in every copy. This is lettered "PP".

Each edition is protected in a custom deluxe tray-case.

"Randall Flagg came to me when I wrote a poem called 'The Dark Man' when I was a junior or senior in college. It came to me out of nowhere, this guy in cowboy boots who moved around on the roads, mostly hitchhiking at night, always wore jeans and a denim jacket. I wrote the poem in the college restaurant on the back of a placemat, but that guy never left my mind."
- Stephen King 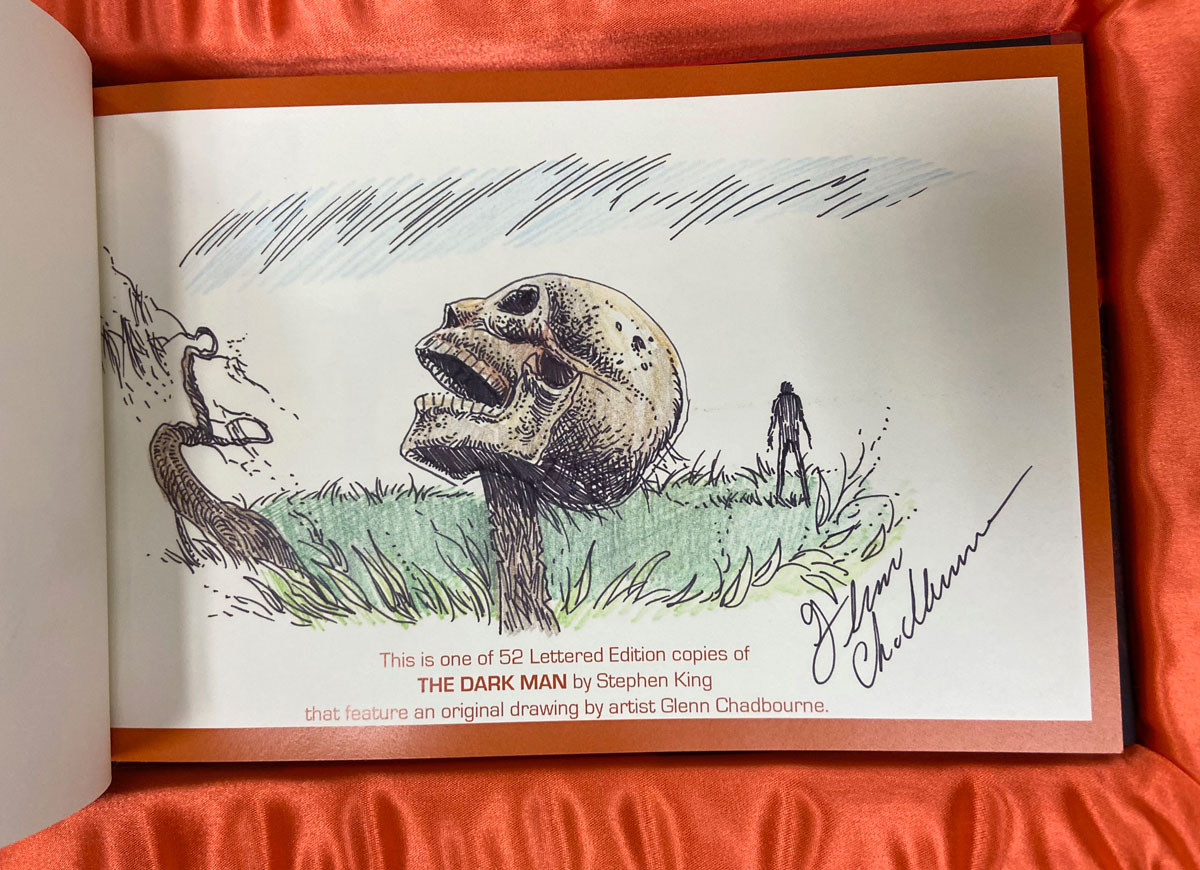 Stephen King first wrote about the Dark Man in college after he envisioned a faceless man in cowboy boots and jeans and a denim jacket forever walking the roads. Later this dark man would come to be known around the world as one of King's greatest villains, Randall Flagg, but at the time King only had simple questions on his mind: Where was this man going? What had he seen and done? What terrible things...?

i have ridden rails...

More than forty years after Stephen King first wrote his breathtaking poem "The Dark Man," Glenn Chadbourne set out to answer those questions in this World's First Edition hardcover featuring more than 70 full-page illustrations from the talented artist behind The Secretary of Dreams.

i have slept in glaring swamps...

This Cemetery Dance Publications hardcover is a true marriage of words and art, with Chadbourne pulling the images from King's imagination and illustrating them in magnificent detail. This incredible blending of King's words with Chadbourne's art creates a unique page turning experience you can return to again and again, always finding new details hidden in every illustration. You'll discover hidden layers and mysterious secrets for years to come.

So who is the Dark Man and why is he traveling the country? The answers are terrifying....

Here are just a few samples of the 70+ full-page interior illustrations: 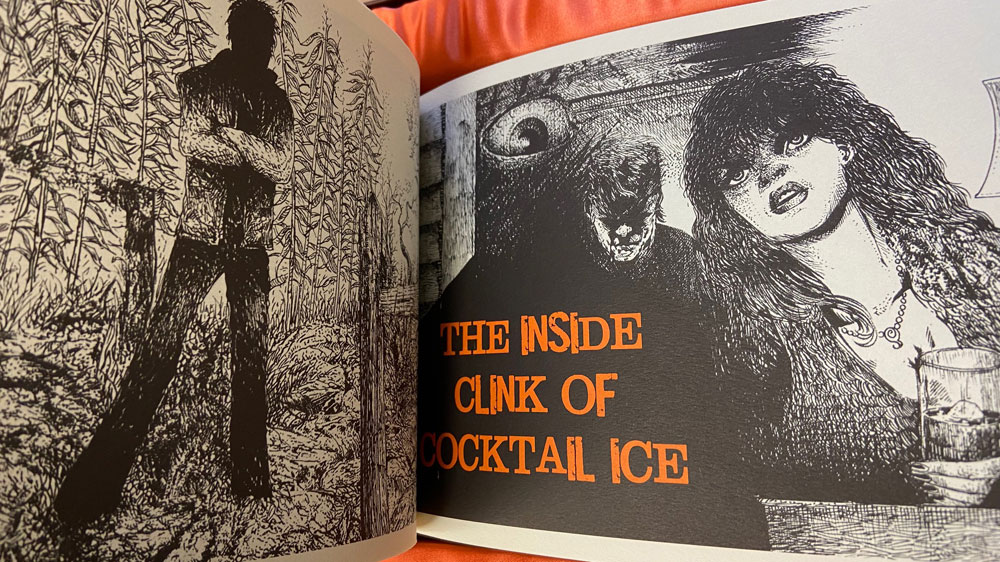 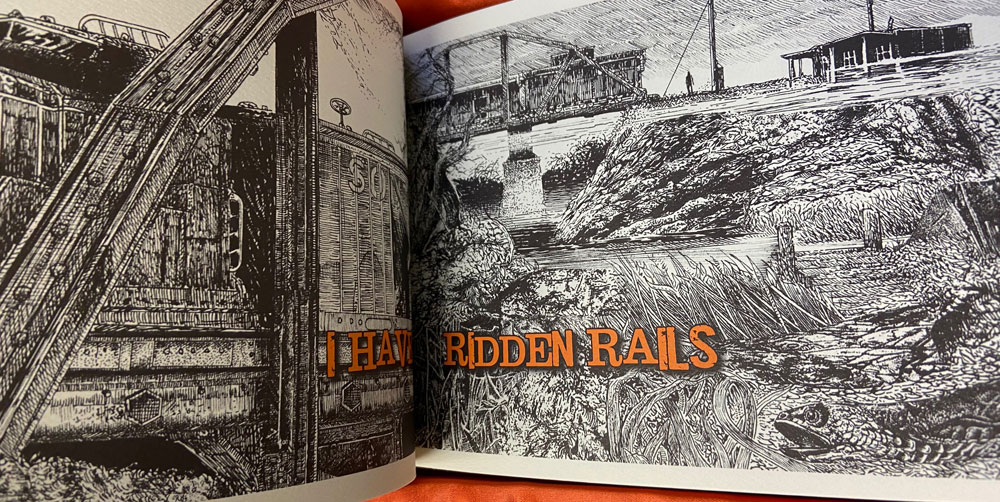 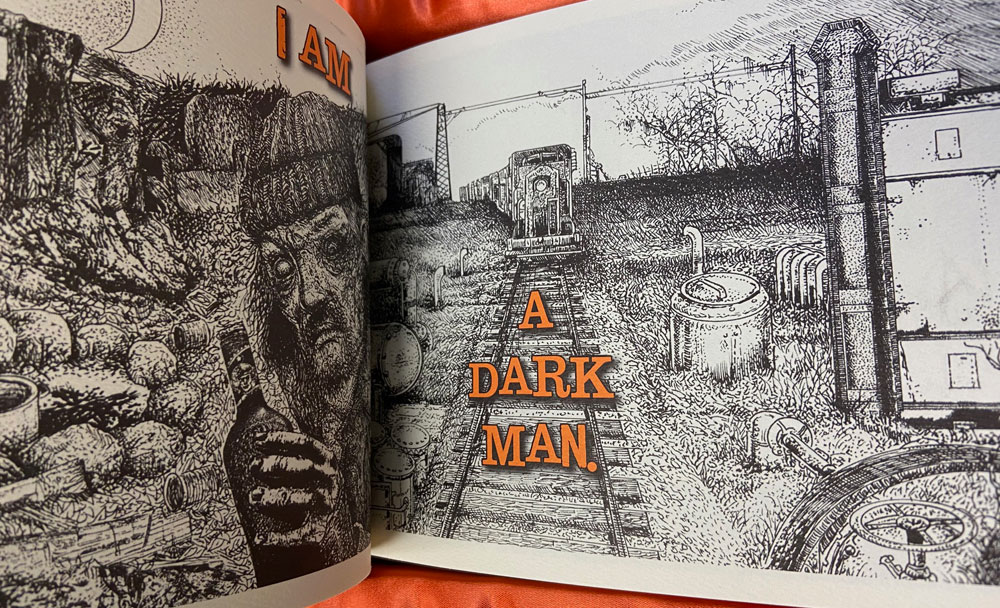 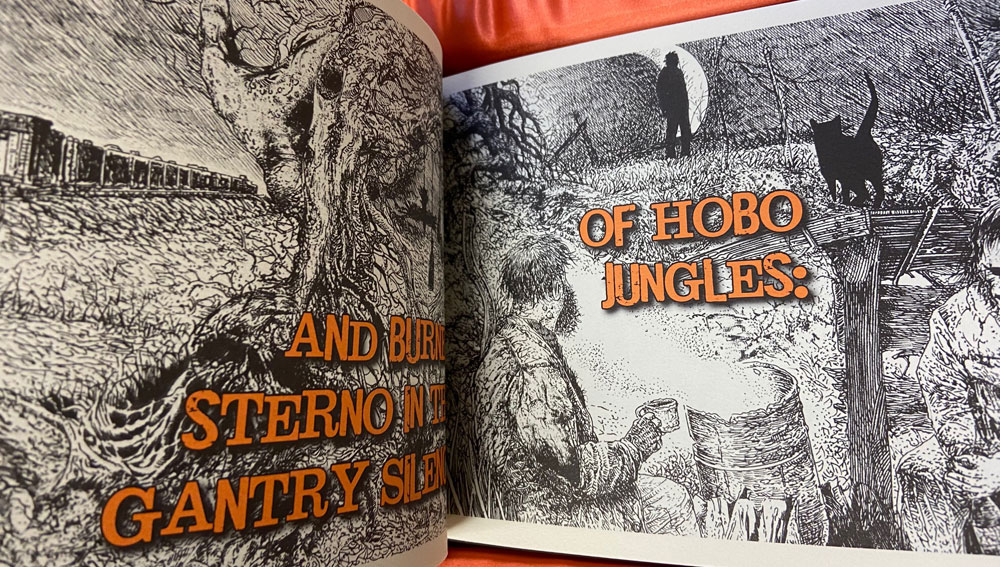 "While the publication of a new work by King is quite a coup by Cemetery Dance, I am more impressed with the work of Chadbourne. Each time I look over the pages, I find something new and enticing. This is a unique volume that ties the art to the words and gives a unique vision of two masters: King showing a glimpse of the beginnings of this unique talent that has entertained us for years; and, Chadbourne showing his mastery at understanding the written word and turning it into a not to be forgotten picture that enhances the experience. King, Chadbourne, and Cemetery Dance are a trio to contend with and this volume is a triumph in the trio of poetry, painting, and publishing. Don't miss this one of a kind work.
-Barry Hunter, The Baryon Review

"Purportedly scrawled by a college-age King on the back of a restaurant place mat, this glowering poem introduced a wandering character of ultimate evil, who would later mature into Randall Flagg of The Stand, The Eyes of the Dragon, and the Dark Tower series. Therefore, even though this is a curiosity, it's a significant one in the King mythos, and Chadbourne's black-and-white interpretation gives the spare text just the rotten juice it craves. The poem itself is the sort of metaphysical, apocalyptic piece you might expect from the late 1960s, but is nonetheless evocative. It begins, "i have stridden the fuming way / of sun-hammered tracks and / smashed cinders," as we follow the slow nighttime progress of a smudgy man traversing a moonlit America of busted merry-go-rounds, dilapidated trains, and agonized cemeteries. Wordless pages fill out the five-stanza poem, with Chadbourne's flat, snarled pencilwork hiding snakes, spiders, rats, and faces in every twisted tableau. It's all suitably ominous, and bewitched fans will be able to draw a direct line between this and The Gunslinger (1982)."
- Daniel Kraus, Booklist

"The poem itself is told from The Dark Man's point-of-view, and it's an effectively chilling piece of work. The world he describes is not unlike most King settings, a place where mundane sights like all-night filling stations and wheat fields exist beneath an ominous 'savage sickle moon,' and where sits 'a gutted columned house leeched with vines.' It's strong imagery, and it's easy to see how aspects of the character bled over into King's later work... But where The Dark Man really comes to life is in the marriage of King's text to Glenn Chadbourne's stark, brutal imagery. Thumbing through the book you can almost feel a cold October wind coming off the pages, and you can almost smell the desperation and fear permeating the desolate, broken landscape. Chadbourne's distinctive style has graced a number of King/Cemetery Dance projects, but never has it felt like a more perfect fit than it does here. The drawings are dense, packed with details that seem to shift and flow of their own accord so that each time you study the pages you see something else. It may not be for everybody, but a book like this is sure to please adventurous readers looking for new insight into one of King's most well-known creations. The Dark Man is a moody leap of faith by the creators and the publisher that pays off handsomely in the end."
- Blu Gilliand, The October Country

Sizing comparison. Here are some photos of the Deluxe Limited Edition and the Deluxe Lettered Edition of The Dark Man by Stephen King. 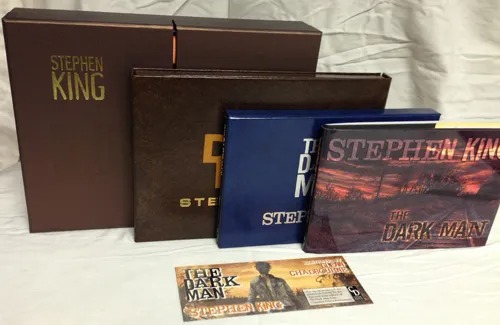 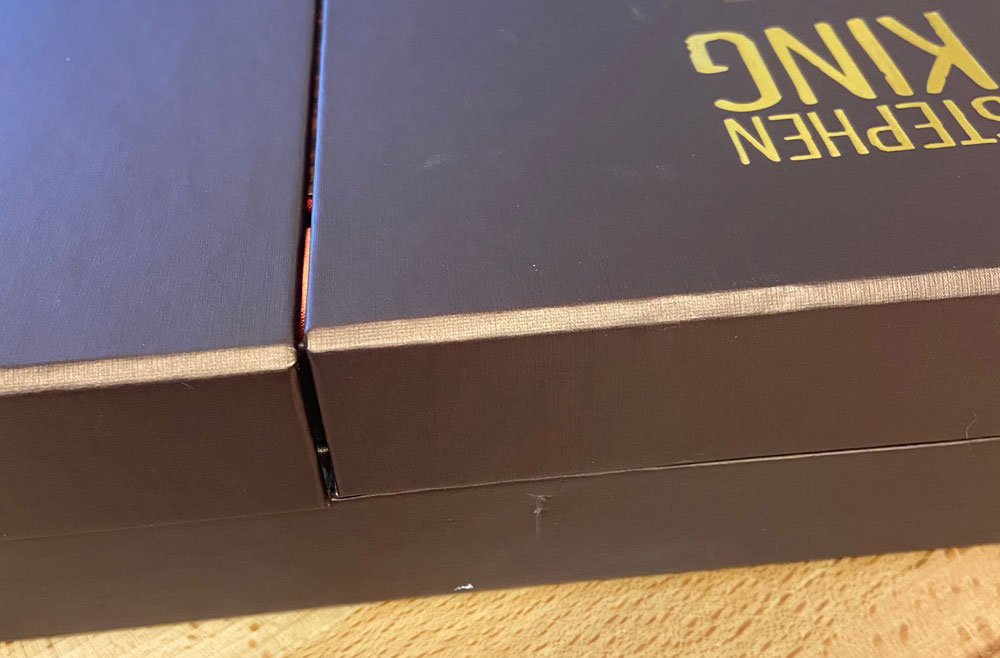 The hardcover book is VERY FINE without any visible flaws. As New with sharp corners. Unread book with square and tight spine. The dust-jacket is now protected in a new archival acid-free Brodart sleeve.

The tray-case is Near Fine+ with a small white spot and ding as shown.

Jack Ketchum "The Girl Next Door" Signed Limited First Edition No. 154 of only 500, Slipcased