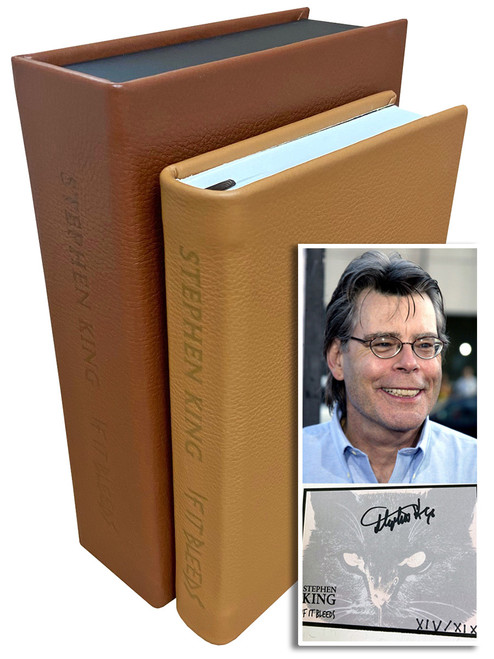 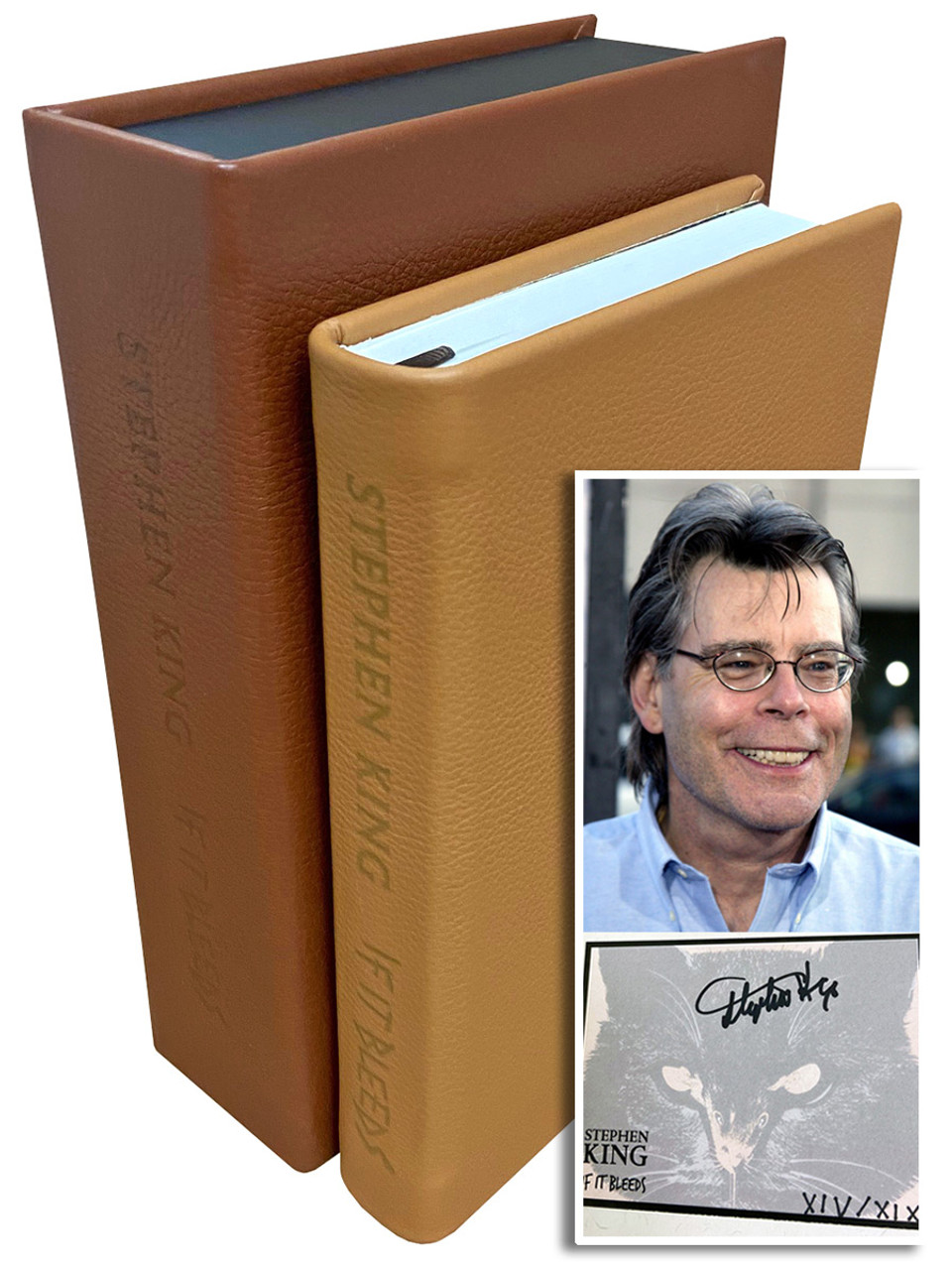 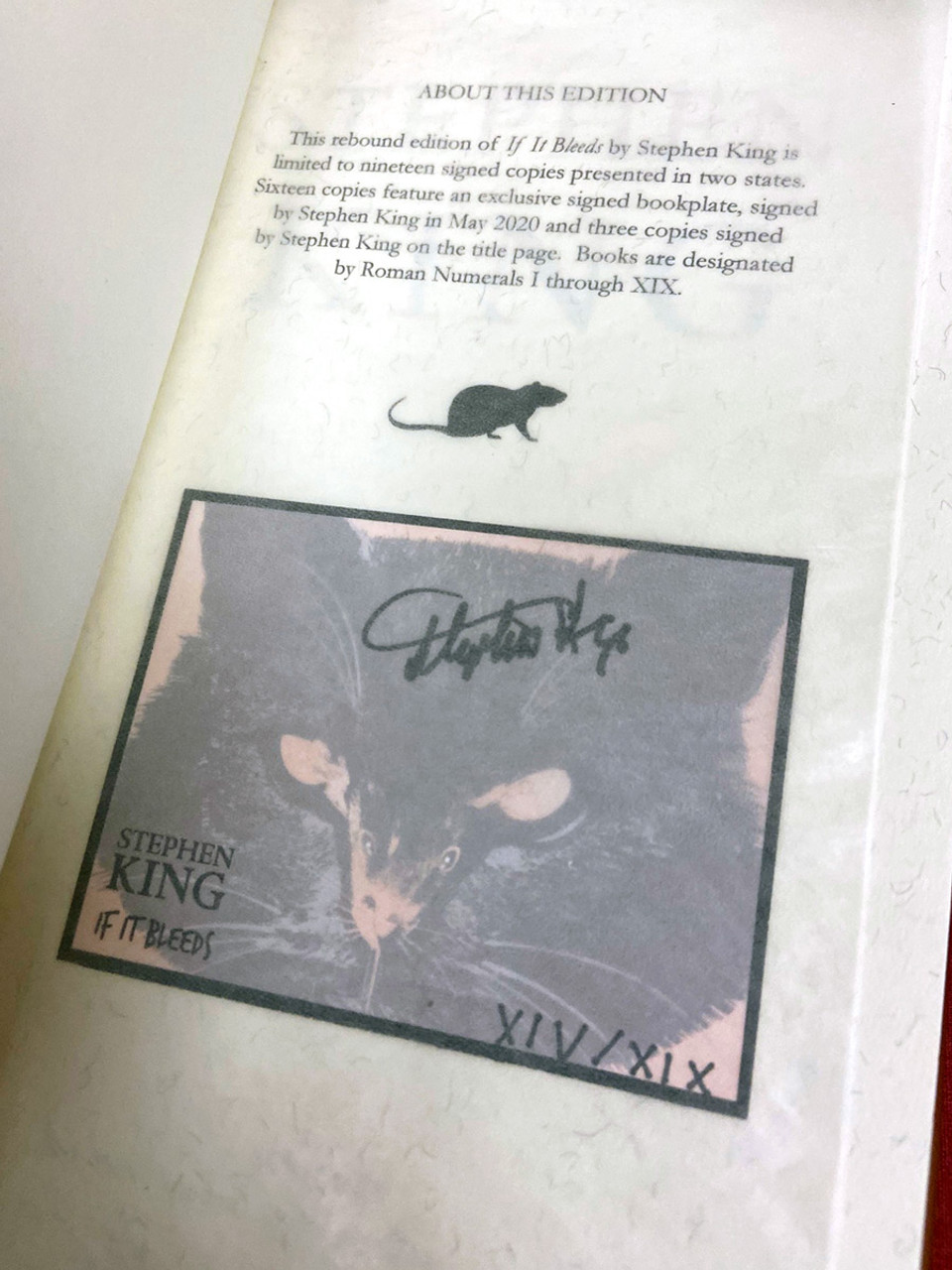 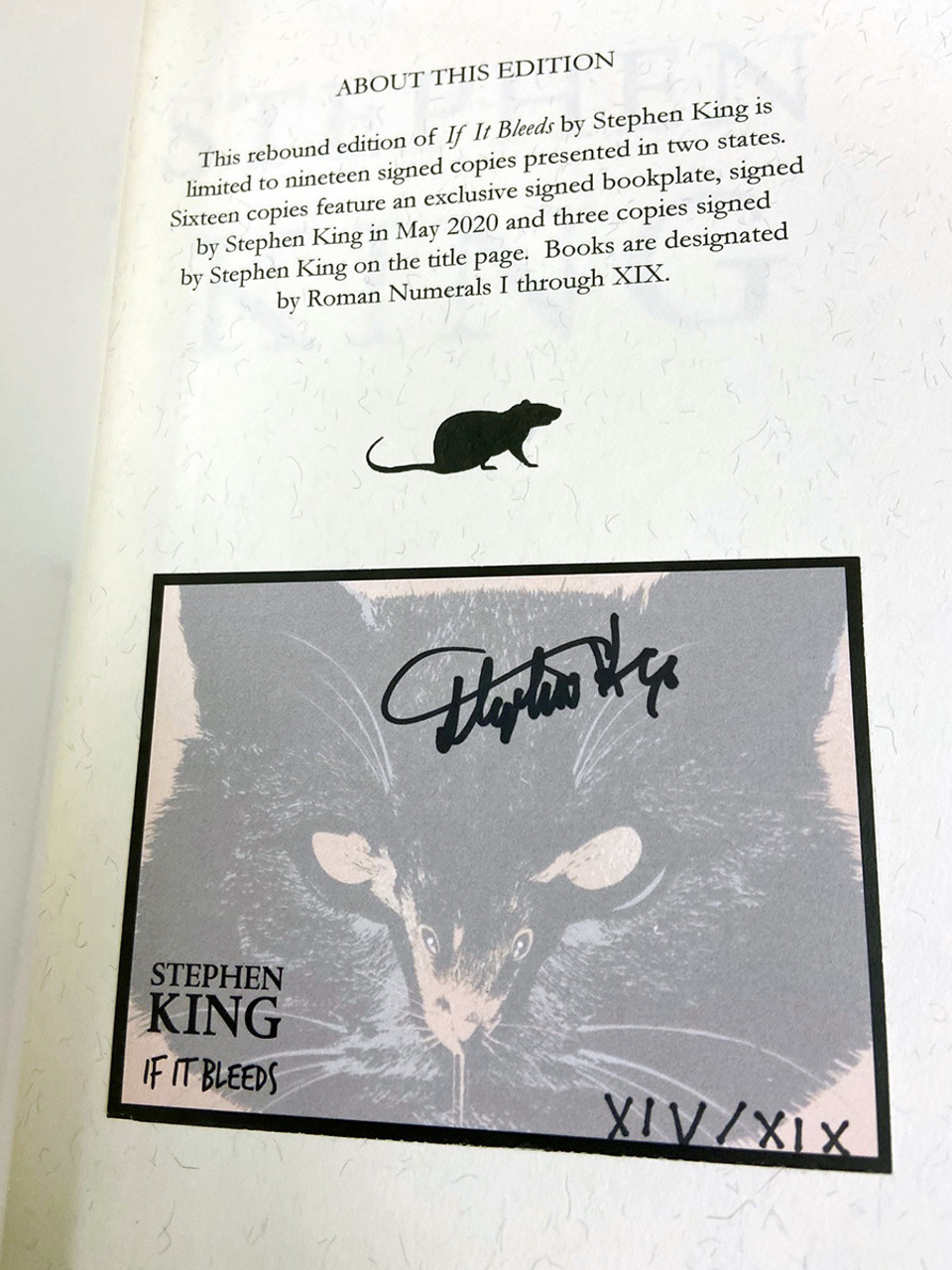 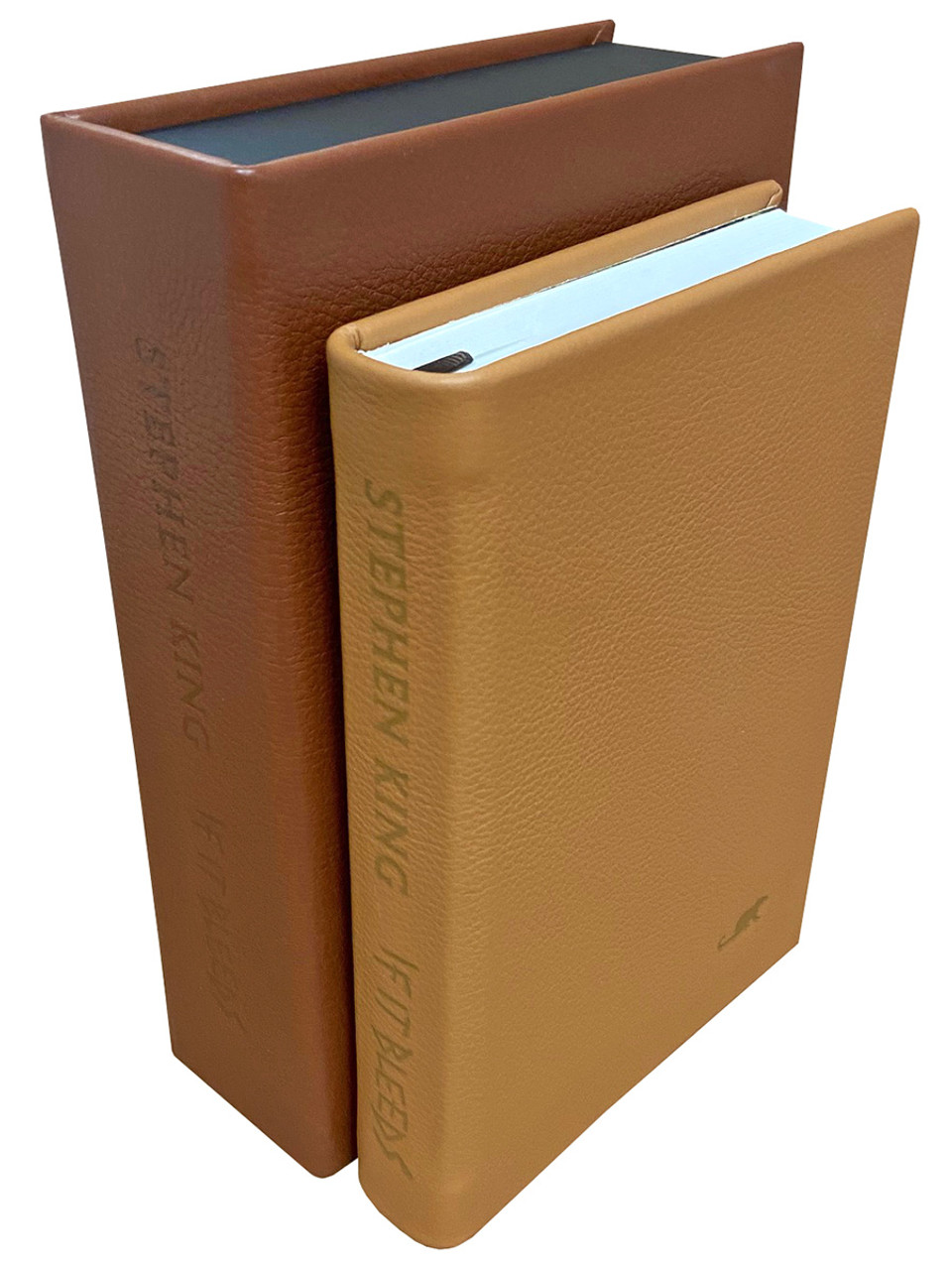 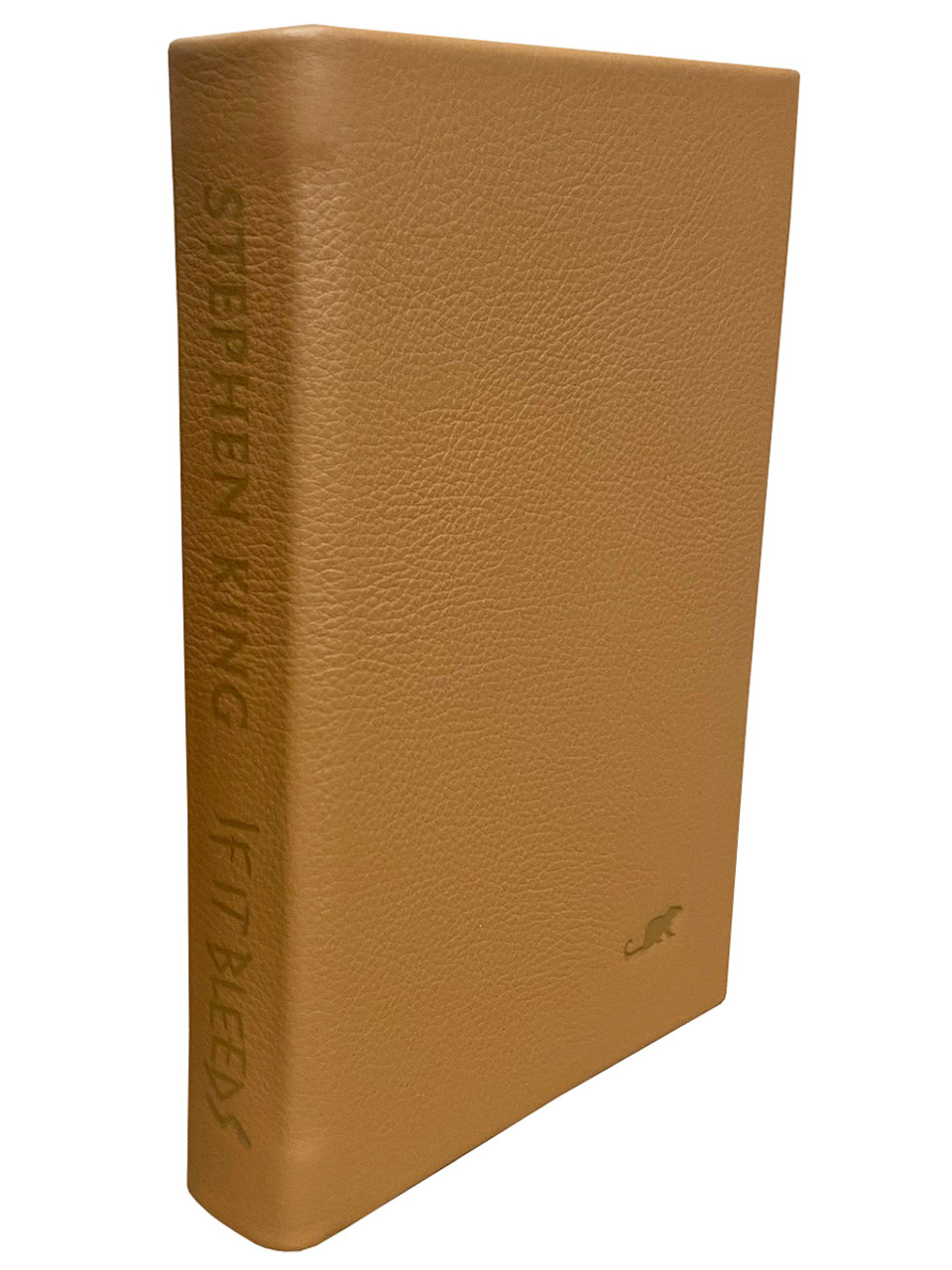 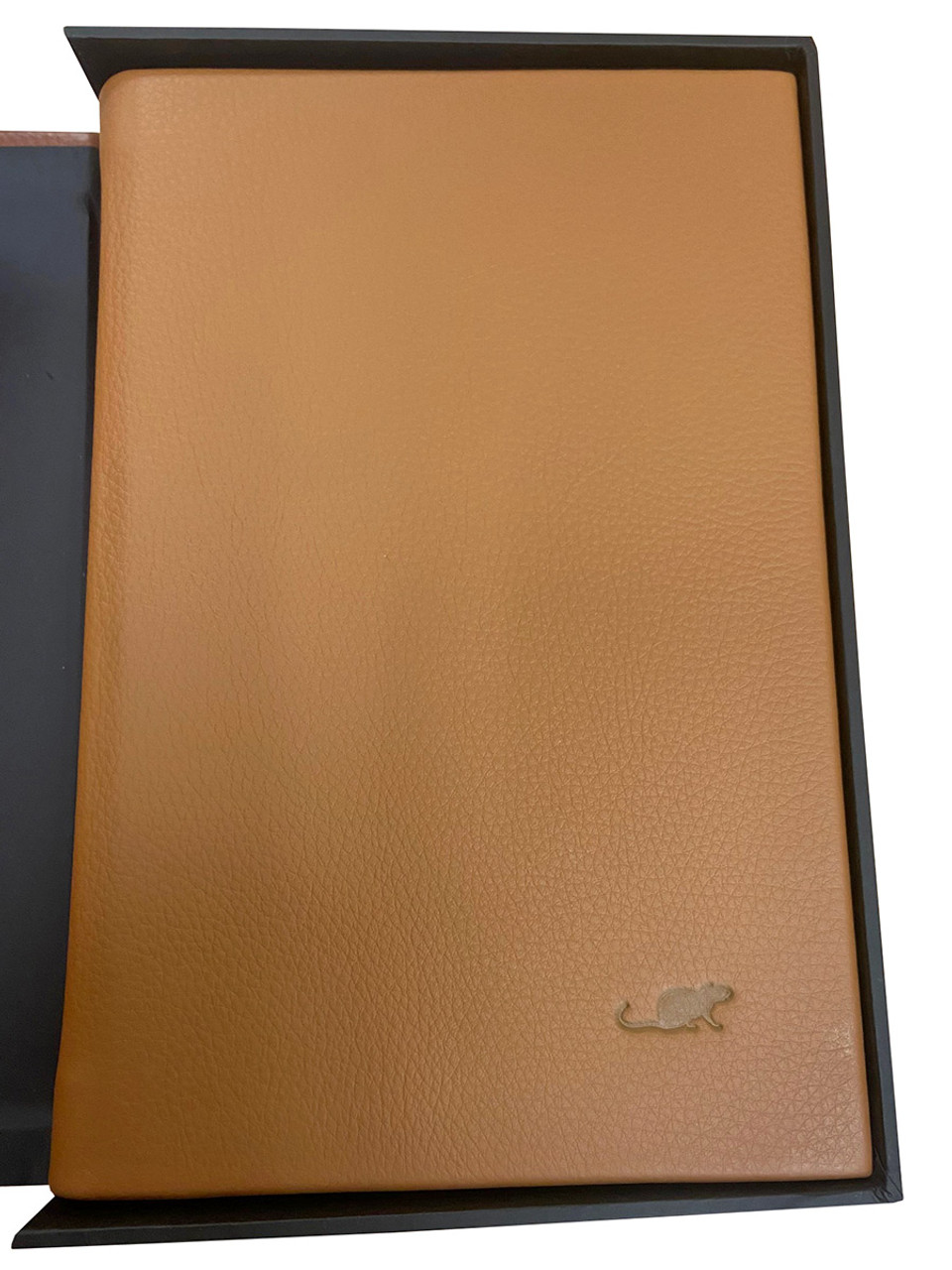 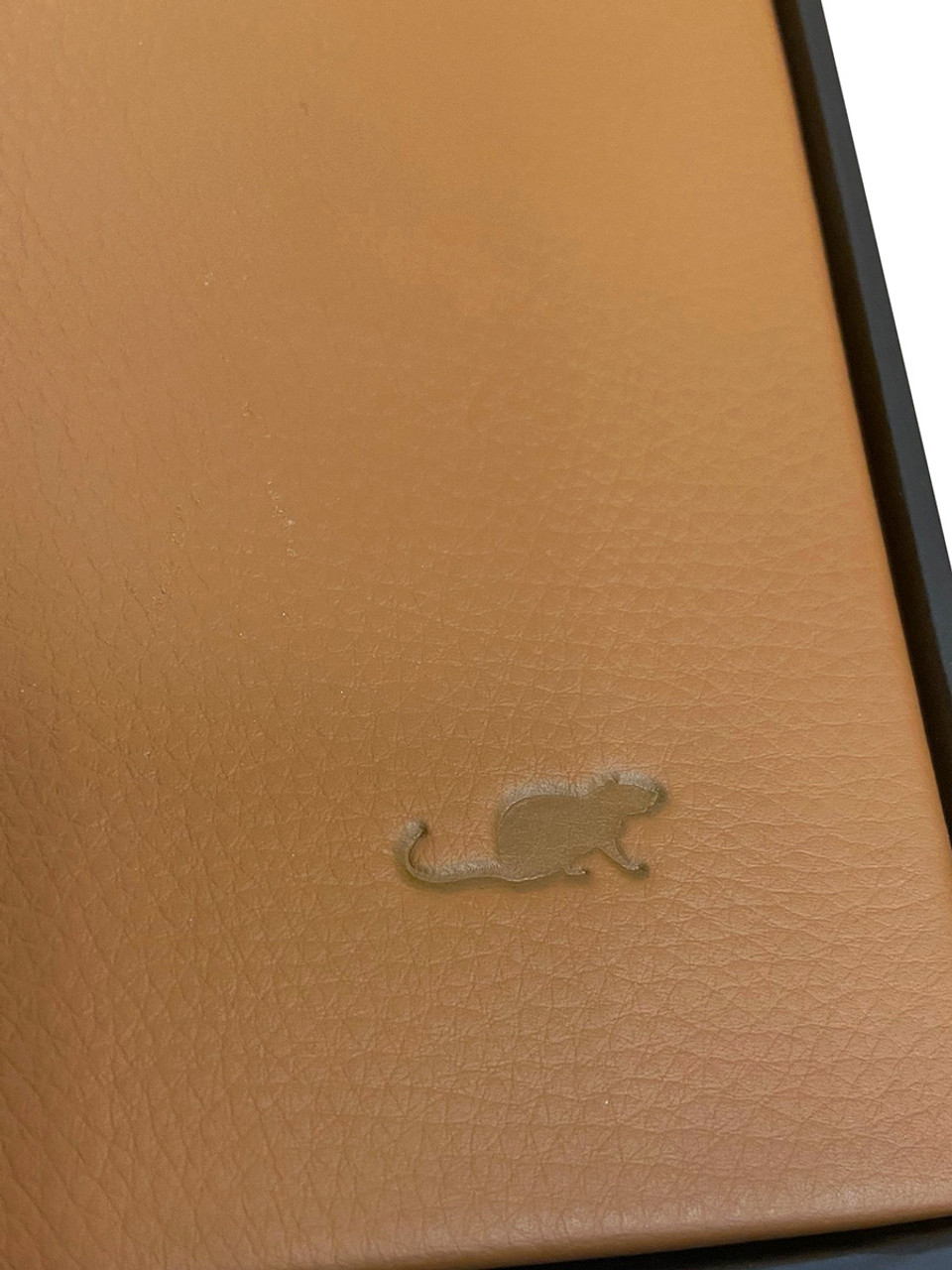 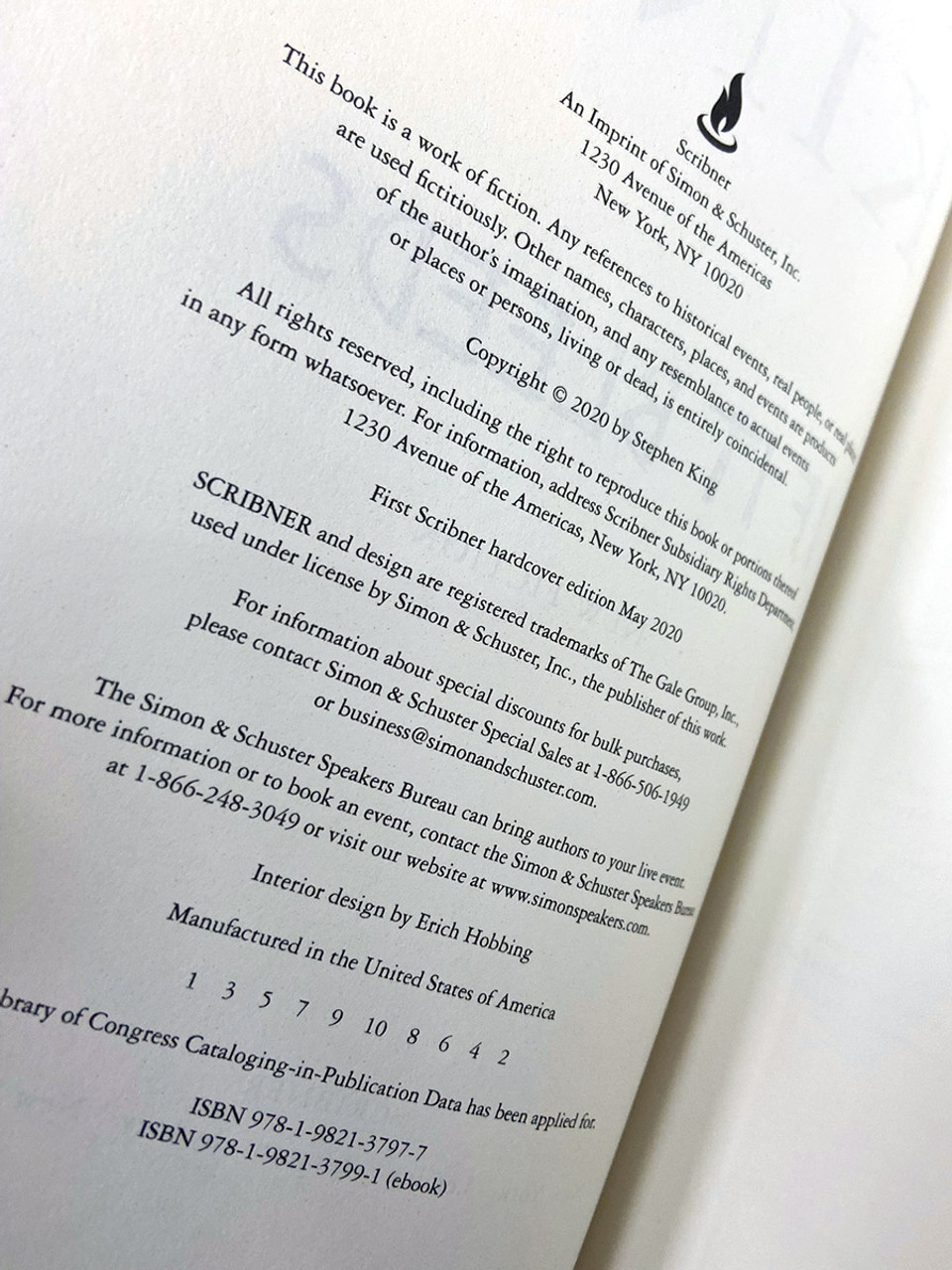 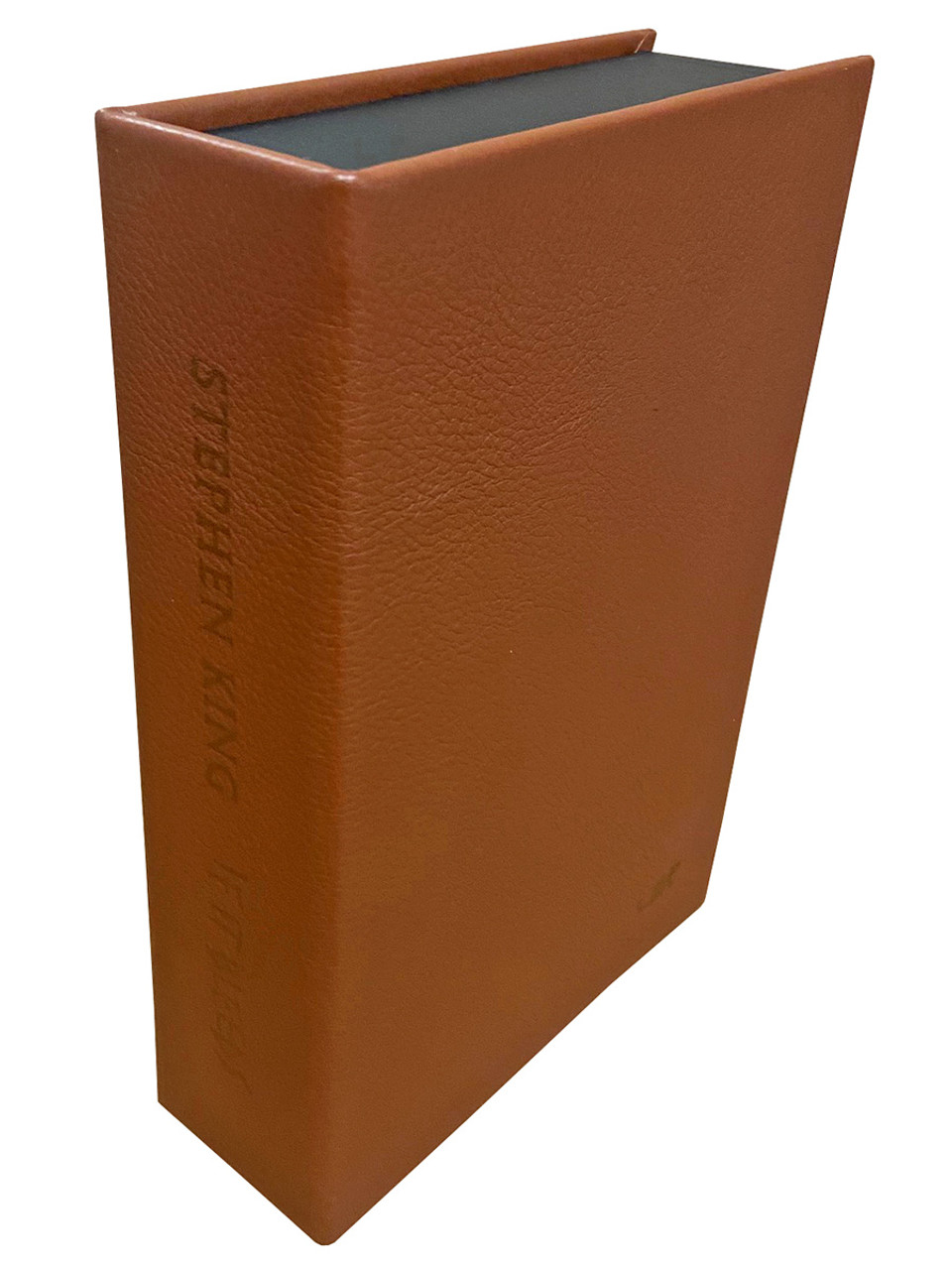 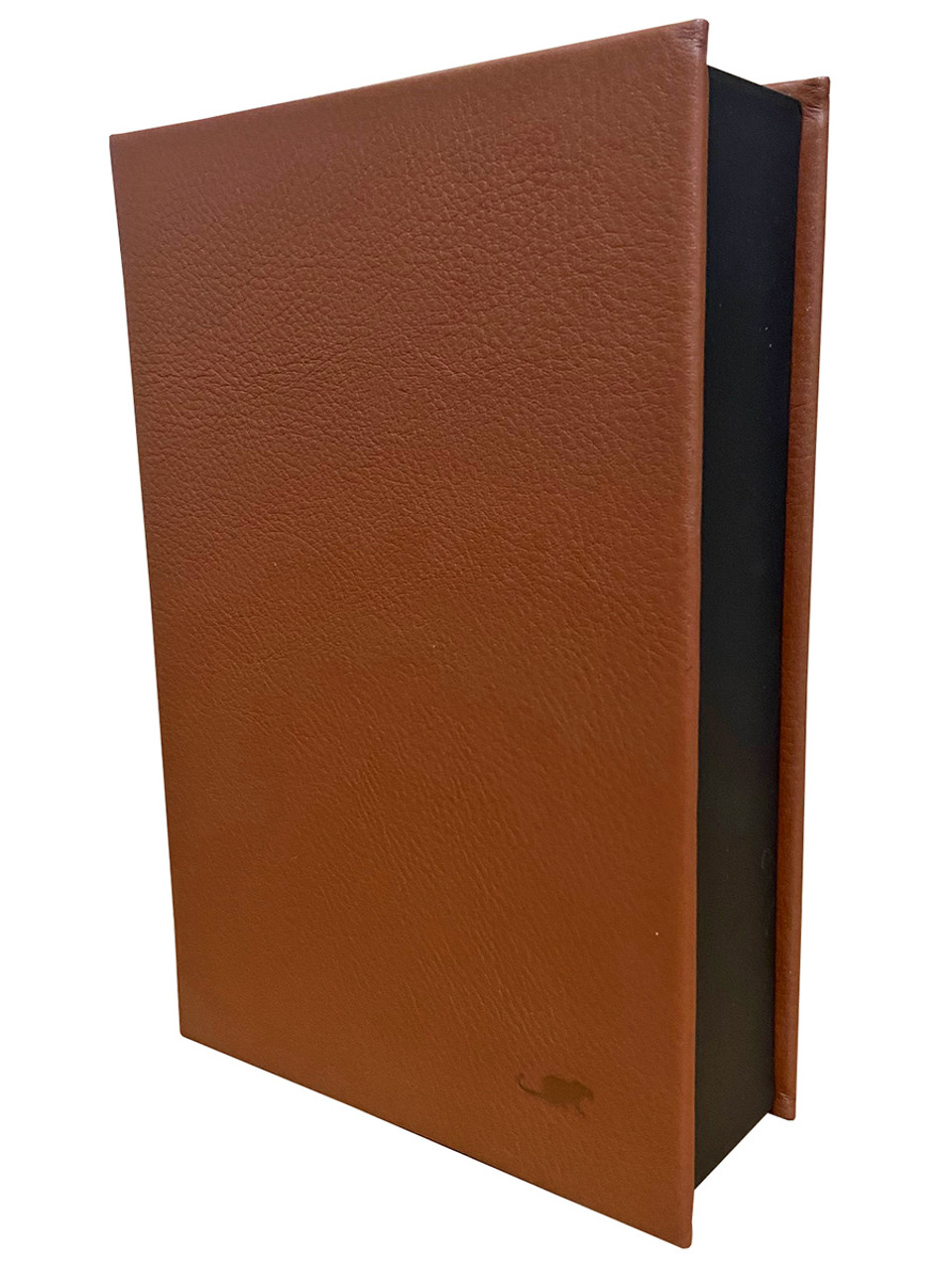 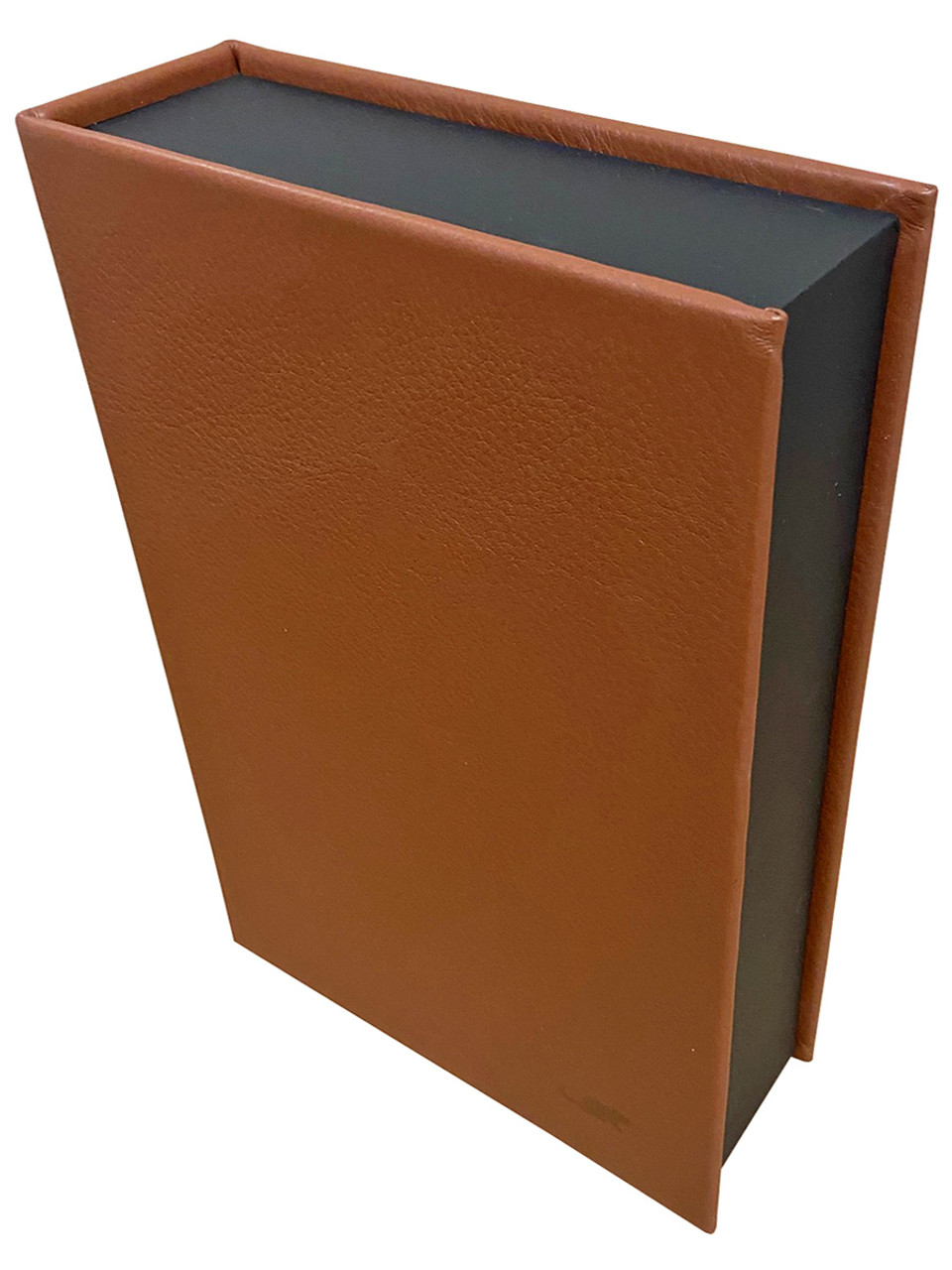 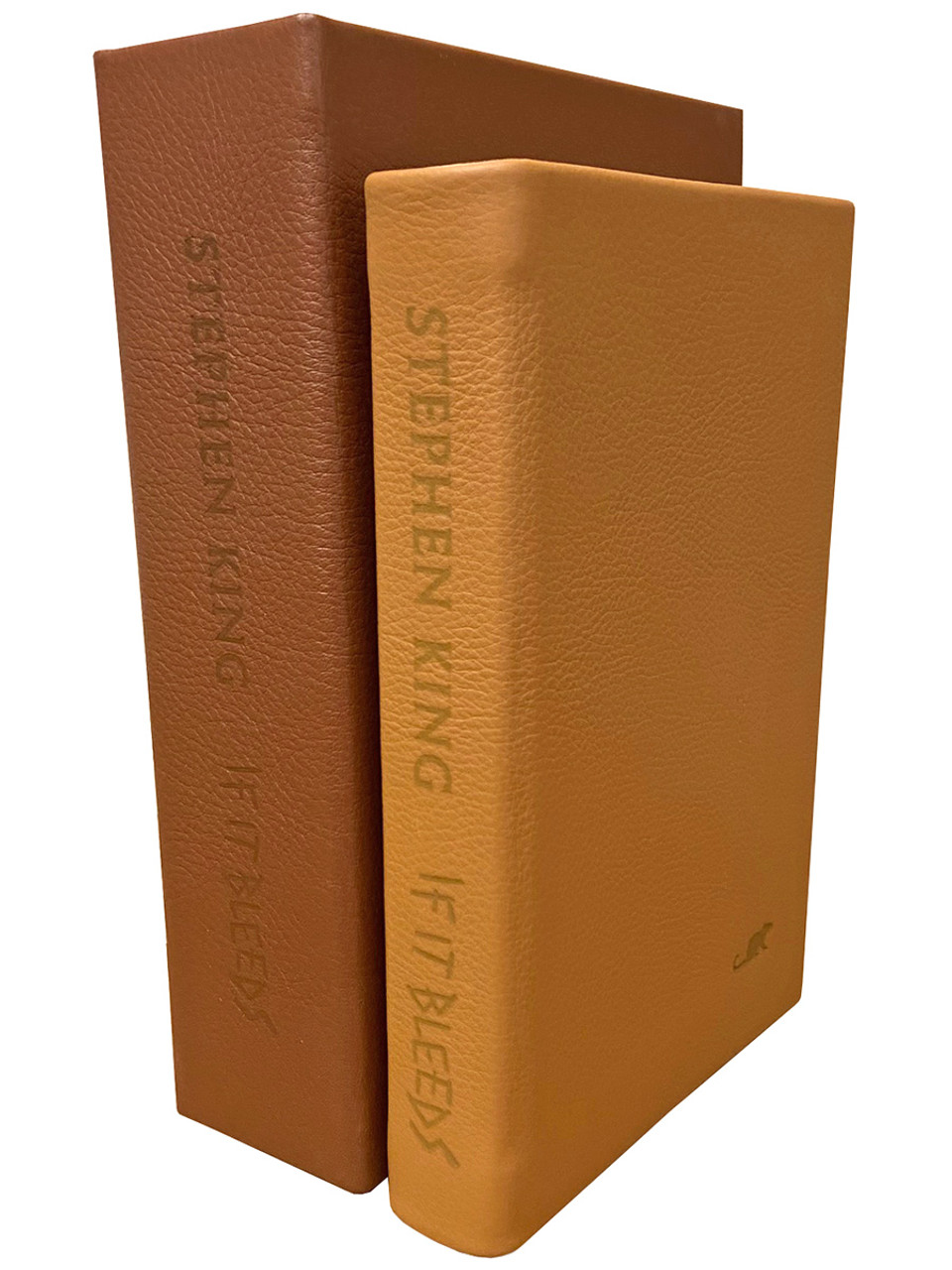 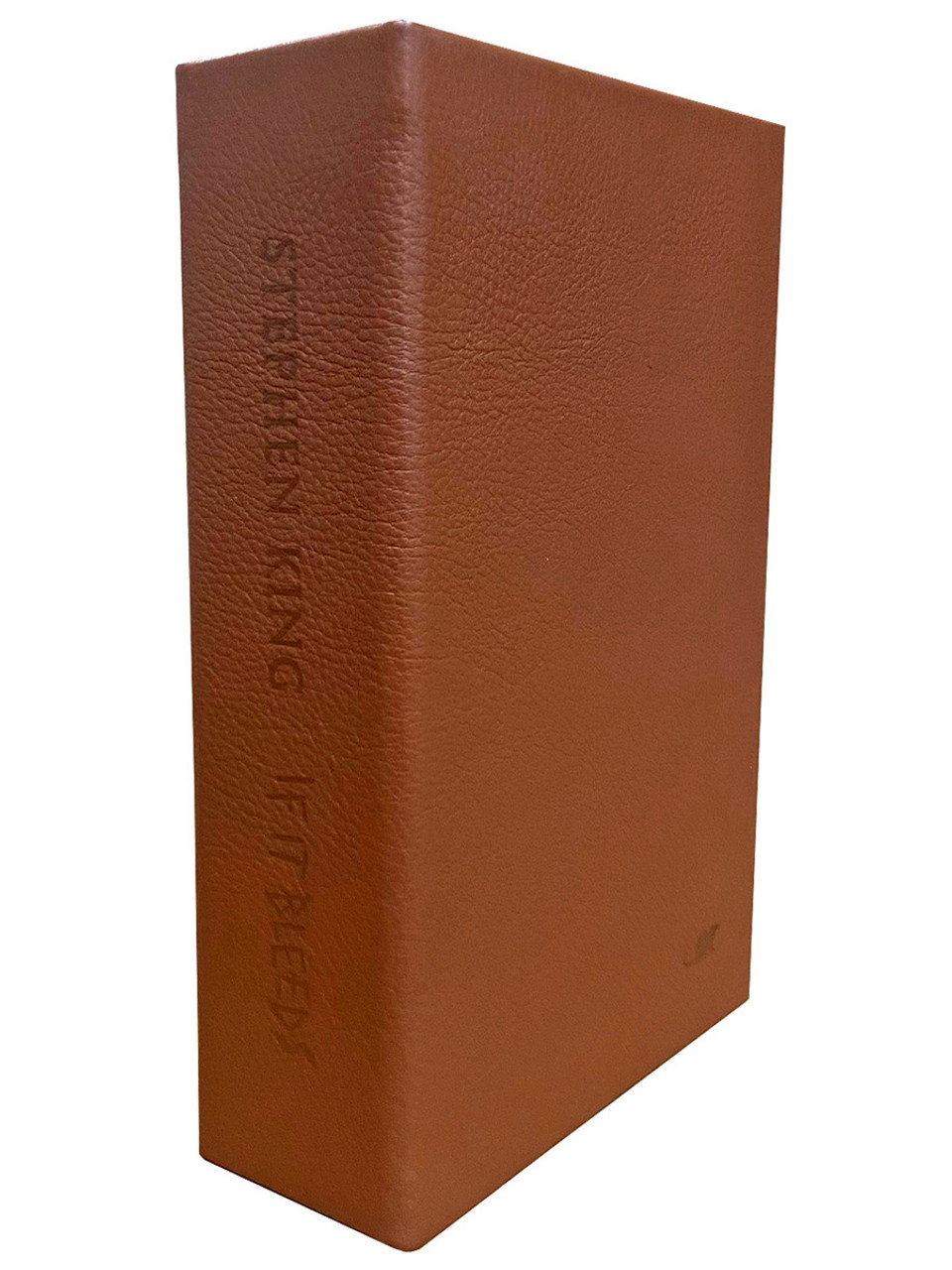 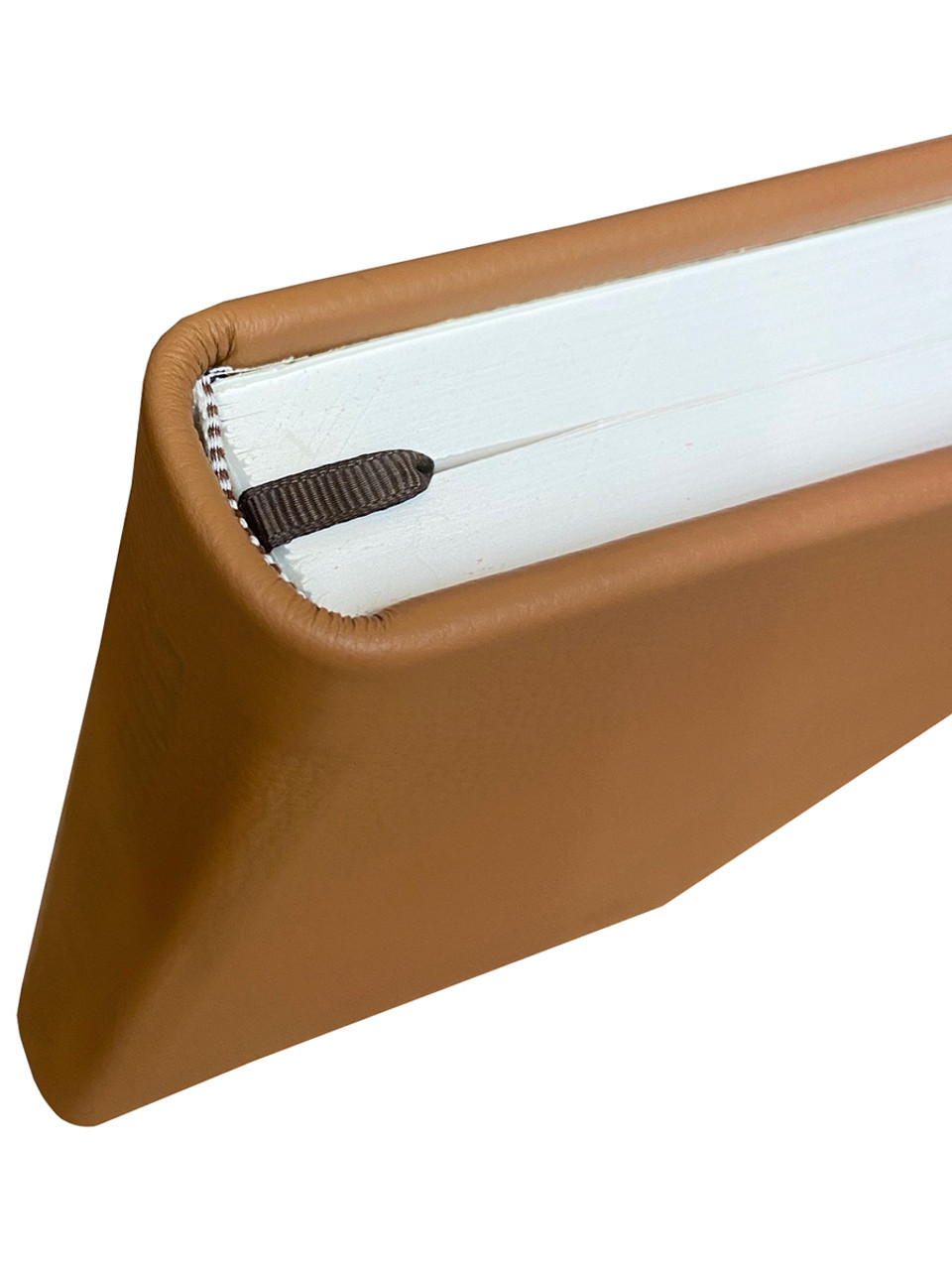 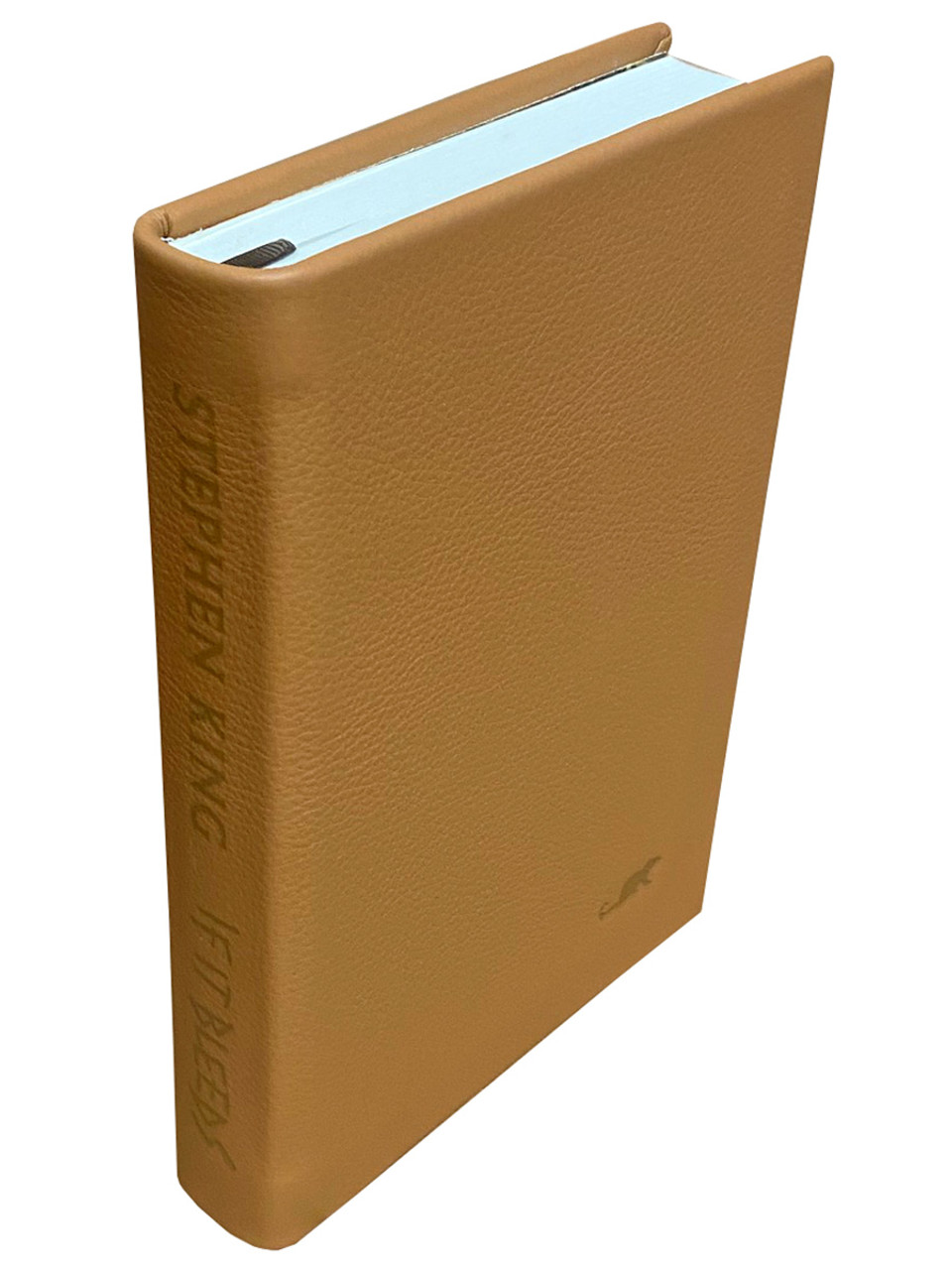 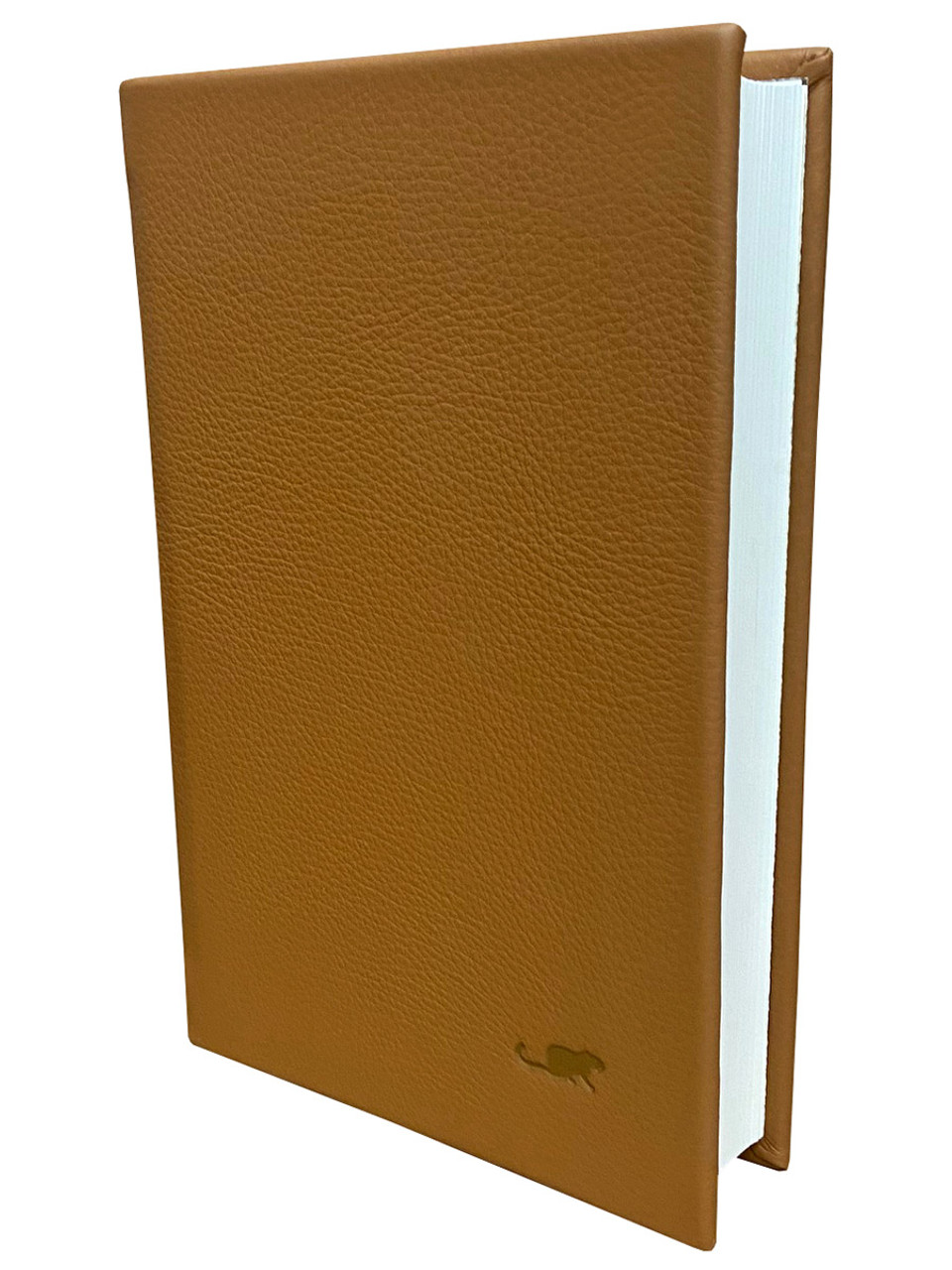 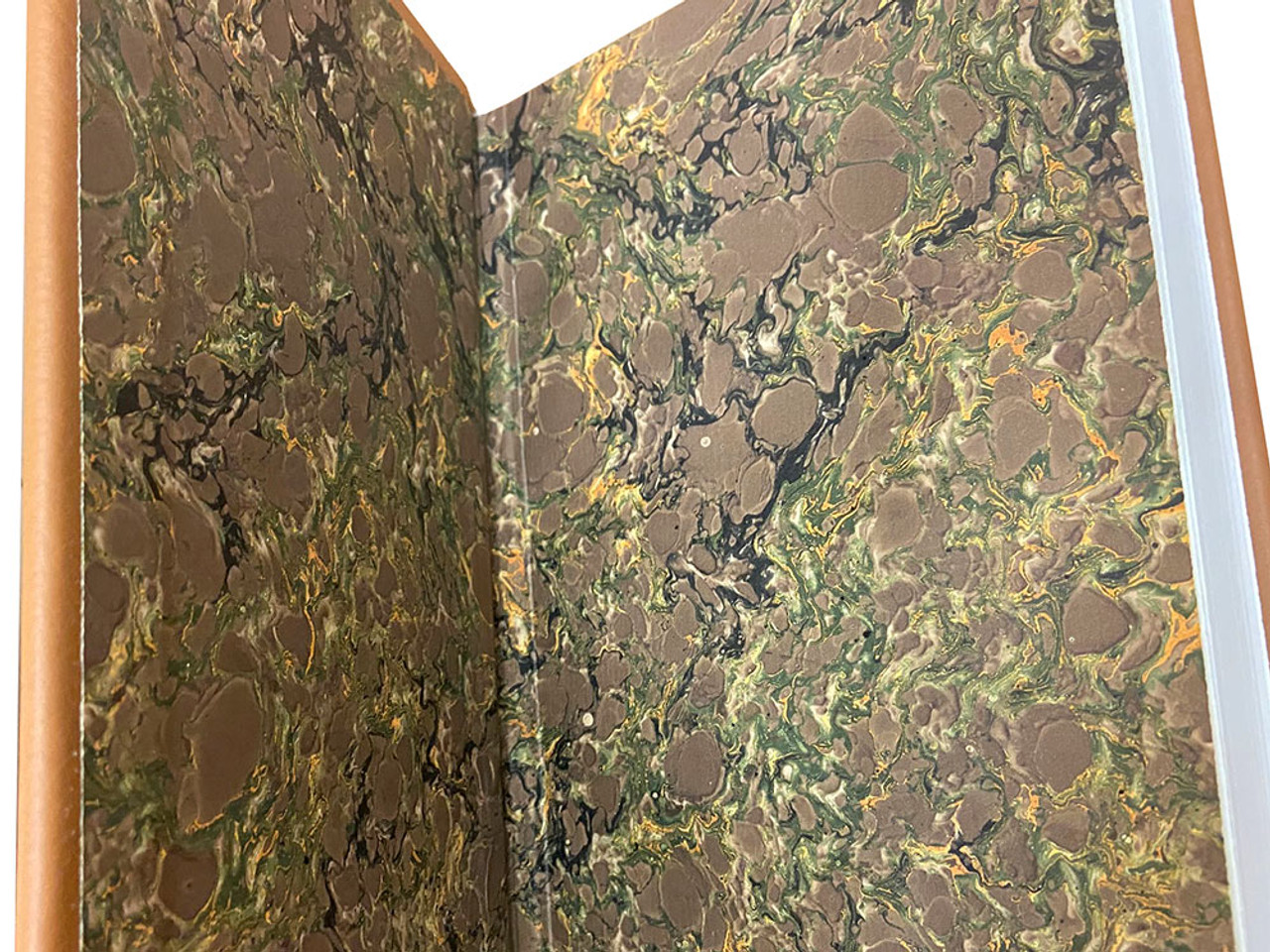 A Rare Book For the Avid Collector

Chichon Books 2020. "If It Bleeds" Signed Roman Numeral XIV/XIX. Rebound series. US First Edition, First Printing. Luxuriously rebound in full genuine brown leather. This edition was part of the collection of four limited first edition rebound books produced by Cichon Books in the US. This is Roman Numeral XIV of XIX. These books were never available for sale to the general public, but rather traded within the Stephen King collecting community.  Personally signed by Stephen King onto a specially designed "bookplate" page that has been tipped into the book along with a protective acid-free tissue paper. Brown ribbon marker. Housed in a matching leather bound solander tray-case. As New.

This is one of the sixteen copies with the special signed bookplate.

There are no purchasing right included with this item with regards to future editions. 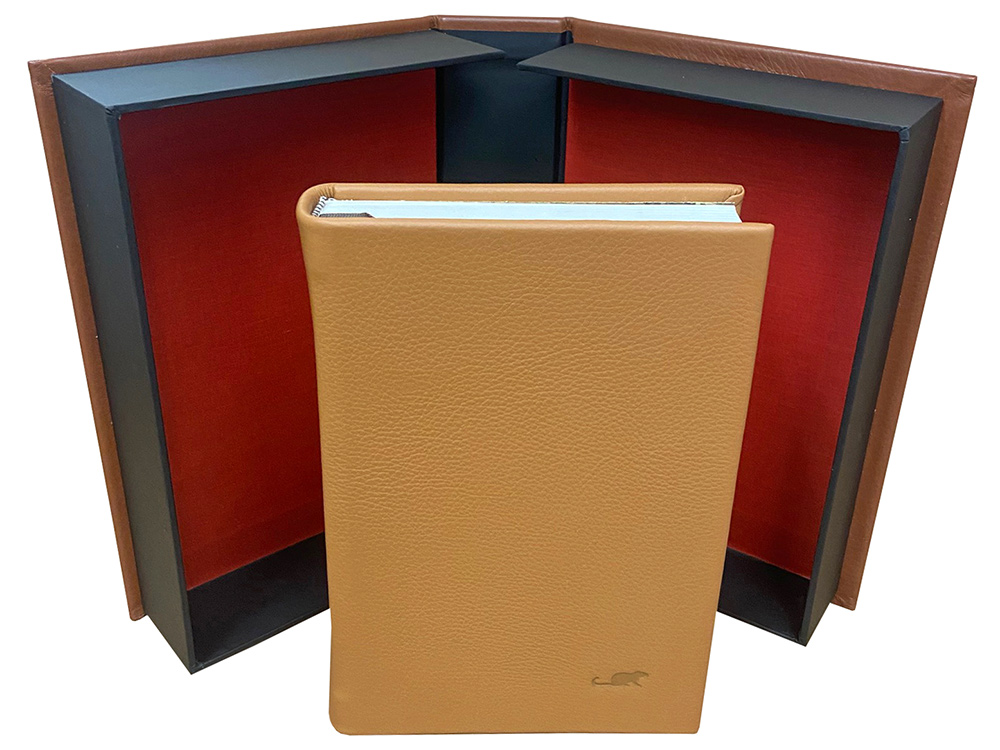 From #1 New York Times bestselling author, legendary storyteller, and master of short fiction Stephen King comes an extraordinary collection of four new and compelling novellas—Mr. Harrigan’s Phone, The Life of Chuck, Rat, and the title story If It Bleeds—each pulling you into intriguing and frightening places.

The novella is a form King has returned to over and over again in the course of his amazing career, and many have been made into iconic films, including “The Body” (Stand By Me) and “Rita Hayworth and Shawshank Redemption” (Shawshank Redemption). Like Four Past Midnight, Different Seasons, and most recently Full Dark, No Stars, If It Bleeds is a uniquely satisfying collection of longer short fiction by an incomparably gifted writer.

“As classic as [King’s] novels are, his shorter fiction has been just as gripping over the years...The true highlight of the collection is the phenomenal ‘The Life of Chuck’...Just when you think things are getting really weird, it all snaps together like an epiphany and you get to the gorgeous meat of the matter...Sure, King still owns the fright business like none other, but the iconic author will keep you up late at night engrossed in four tales about our dreams and our frailties.”
—Brian Truitt, USA Today

“IF IT BLEEDS contains four new, exceptionally compelling novellas that reaffirm [King’s] mastery of the form...the mid-length narrative suits his talents particularly well, permitting a degree of expansiveness while maintaining a controlled, disciplined approach to the material at hand. The results are stories that cover a surprising amount of emotional territory but can still be read in a sitting...a collection filled with startling, sometimes unsettling pleasures. In IF IT BLEEDS, King continues to draw from a rich and varied reservoir of stories. At its best, his work remains deeply empathetic and compulsively readable. May the reservoir never run dry.”
—William Sheehan, The Washington Post

“[These stories] — about the seductions and corruptions of technology, the extremes of beauty and depravity in even the most ordinary life, the workings of a universe we can never entirely understand — were somehow exactly what I wanted to read right now... ‘The Life of Chuck’ is one of the oddest, most affecting stories I have read in a very long time...As sirens blare outside my Brooklyn window and the headlines grow more apocalyptic by the day, I might start working my way through King’s backlist. He’s good company in the dark.”
—Ruth Franklin, The New York Times Book Review

"While this story collection had been percolating inside of Mr. King for years prior to its release, it is striking — sometimes eerily so — how necessary these stories feel today. 'If It Bleeds' continues the increasingly optimistic bent the author has displayed over the past decade, while still bearing those nightmarish touches at which he excels. When so much is uncertain, there’s no small amount of comfort to be found in these tales — and right now, comfort, in whatever form we can find it, is what we all need."
—Wendeline O. Wright, The Pittsburgh Post-Gazette

"There’s an oddly meta quality to reading Stephen King’s new collection, IF IT BLEEDS, in the era of COVID-19. In addition to the expected supernatural horror themes, the four novellas are undergirded, to great effect, with more earthbound fears: the uncertainty of old age and approaching death; the vampiric nature of the 24-hour news cycle feeding the public’s appetite for pain and disaster; the claustrophobia of being alone and ill during isolating weather; signs of the end times that would be disturbingly recognizable to even the most committed optimist...The jewel in the crown of IF IT BLEEDS, however, is the titular novella...King's choice to have an Outsider masquerading as a television reporter makes for an adroit vehicle to showcase the trite nature of evil."
—Michael Rowe, The Boston Globe

"King's four new novellas might be bite-sized, but they still shine with his brilliant ability to tingle our spines...King's genius is to temper his forays into the dark side of life with a sense of wonder about the world.”
—AARP

“Suspenseful and chilling…This set of novellas is thought-provoking, terrifying, and, at times, outright charming, showcasing King’s breadth as a master storyteller…a powerful addition to his megapopular oeuvre.”
—Booklist, STARRED review

“The four never-before-published novellas in this collection represent horror master King at his finest, using the weird and uncanny to riff on mortality, the price of creativity, and the unpredictable consequences of material attachments...profoundly moving...King clearly loves his characters, and the care with which he develops their personalities draws the reader ineluctably into their deeply unsettling experiences. This excellent collection delivers exactly the kind of bravura storytelling King’s readers expect."
—Publishers Weekly, STARRED review 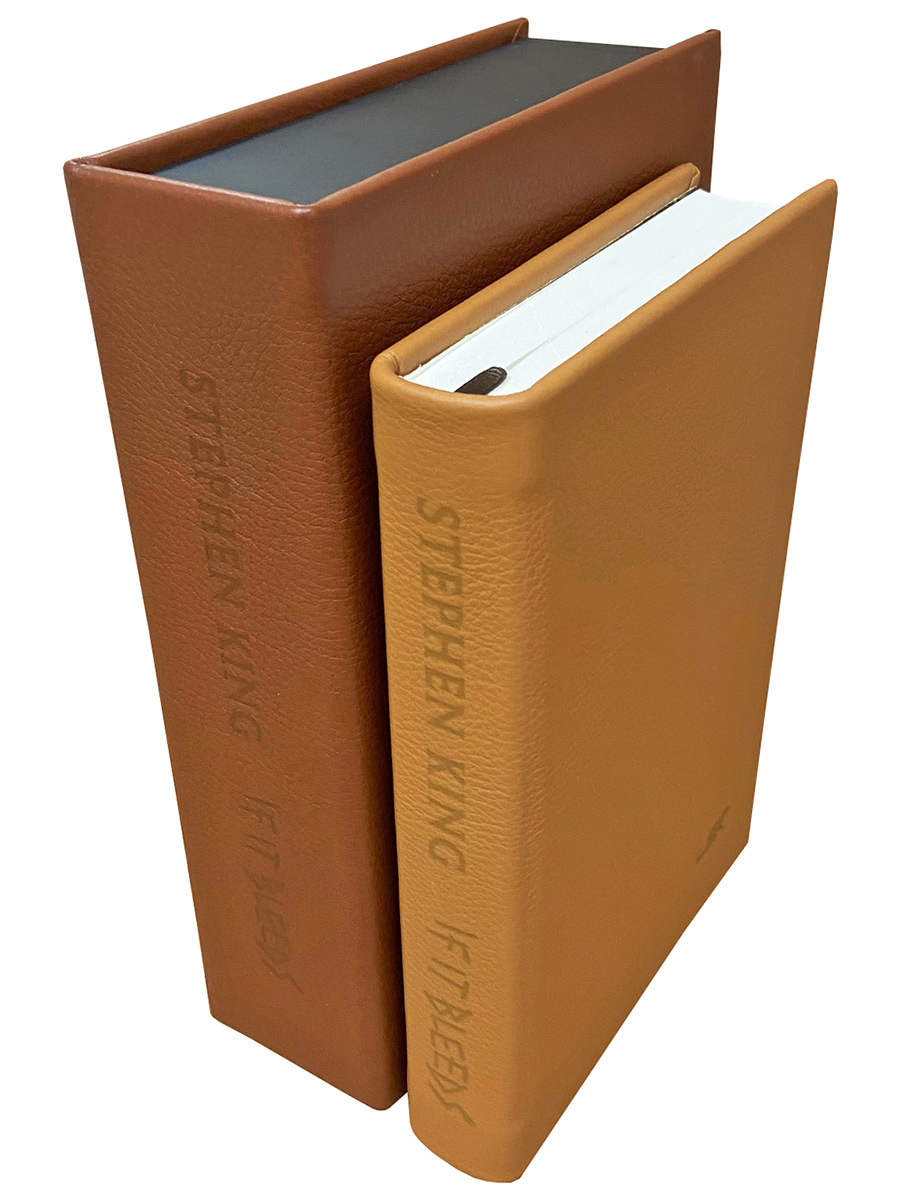