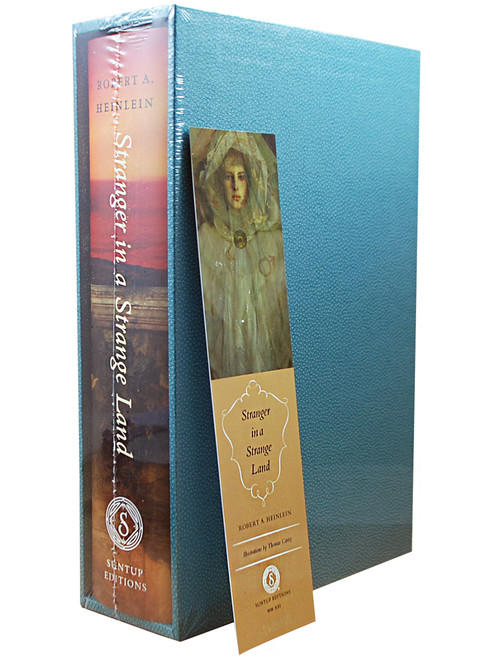 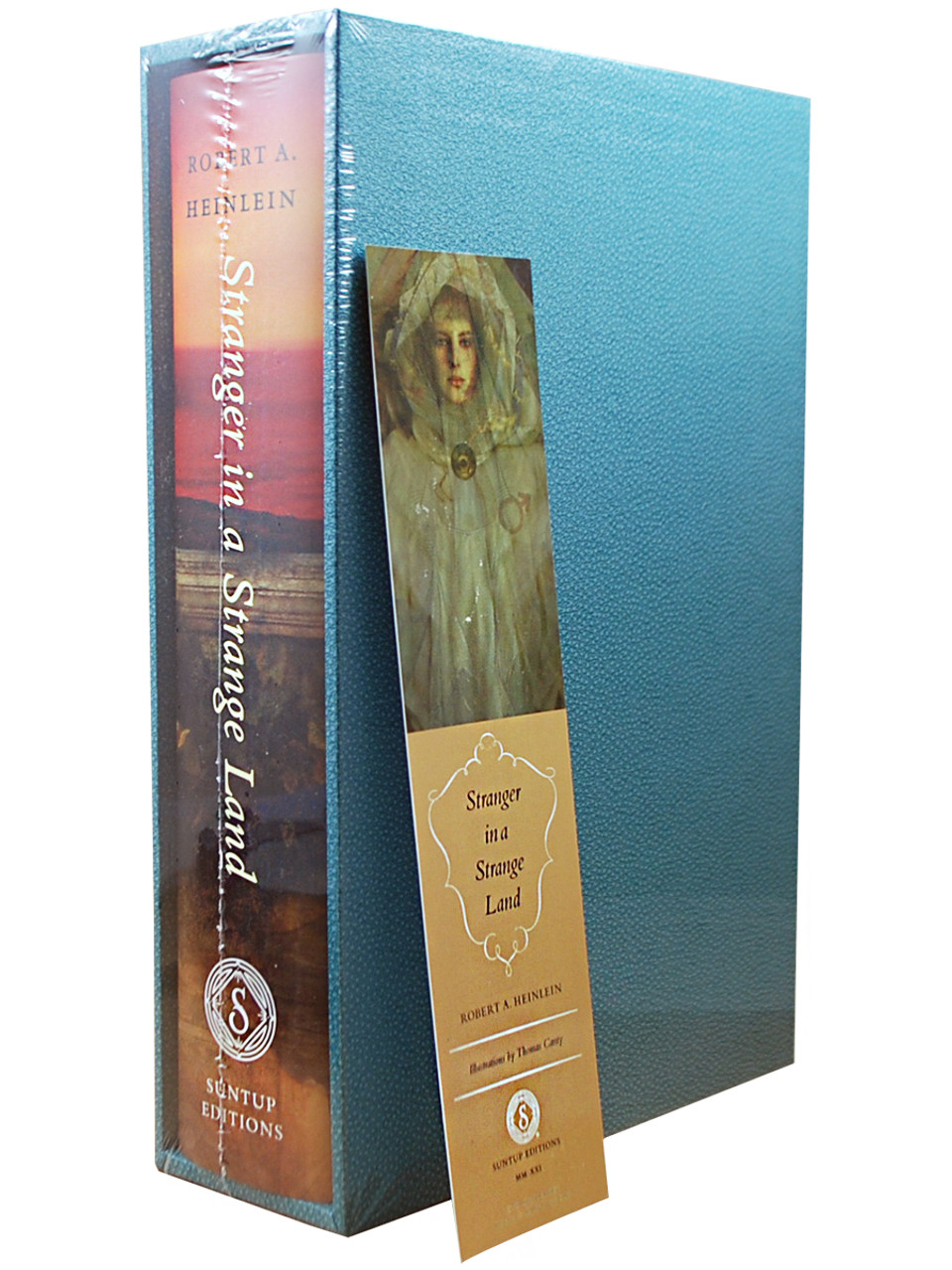 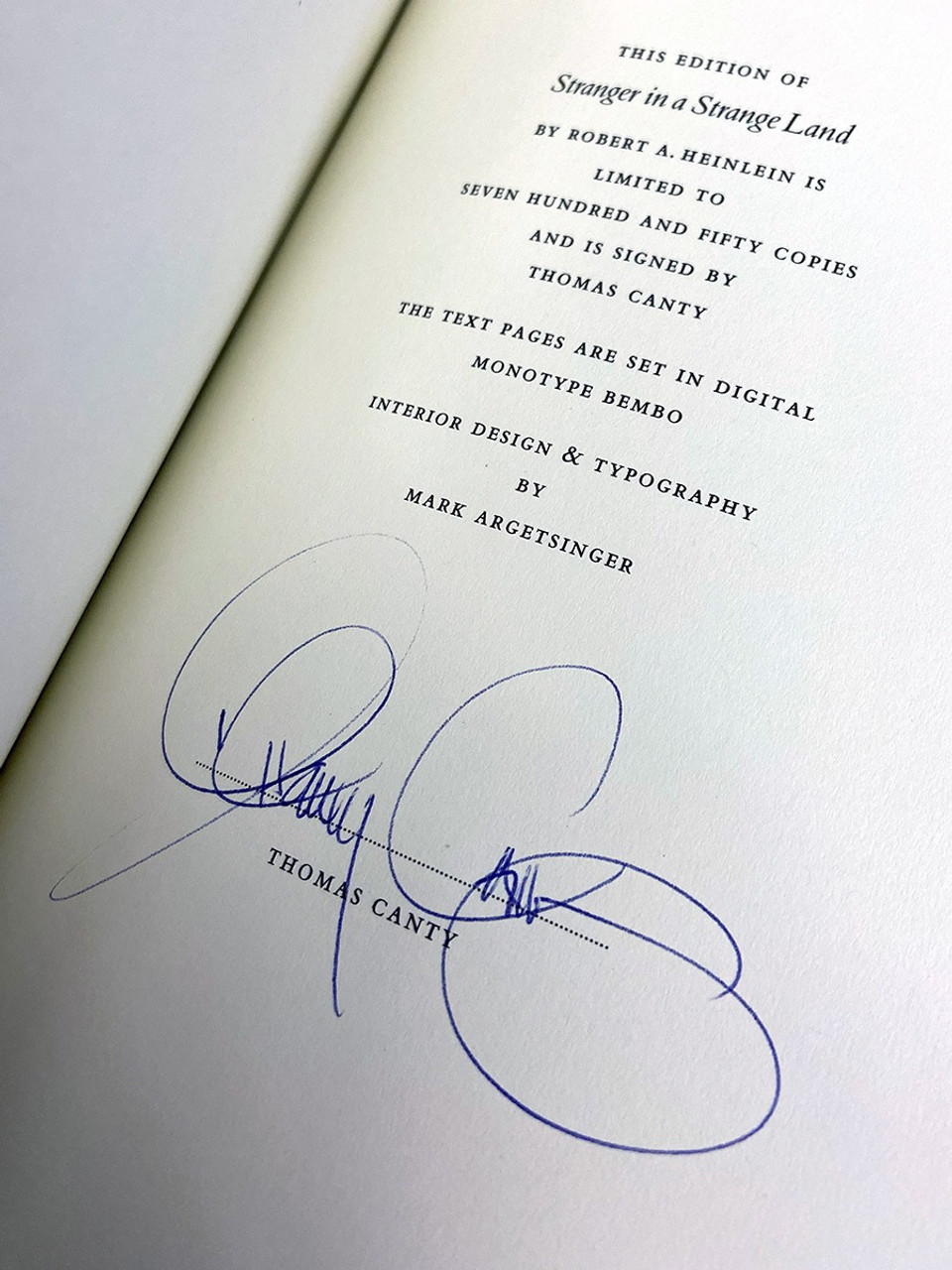 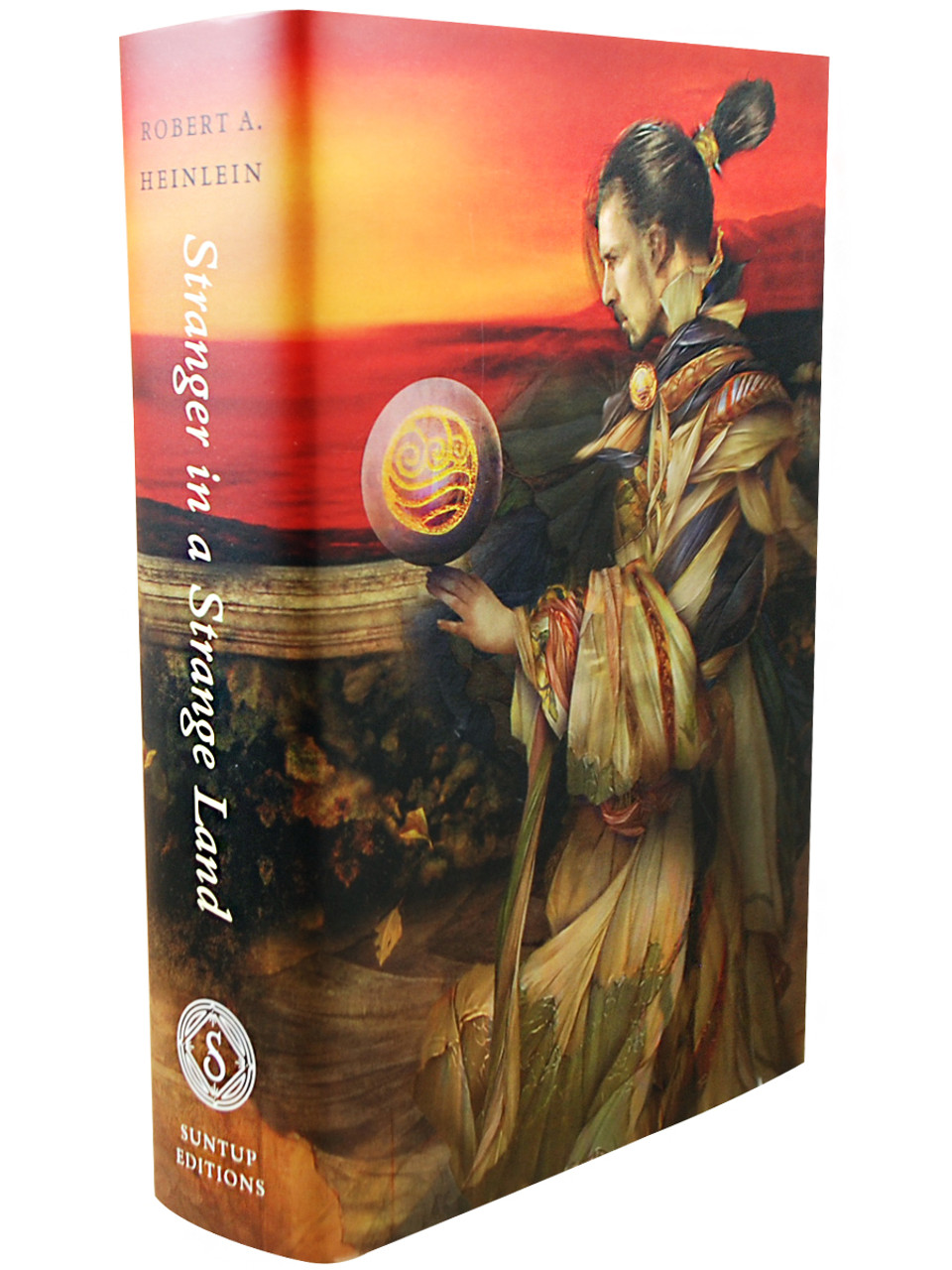 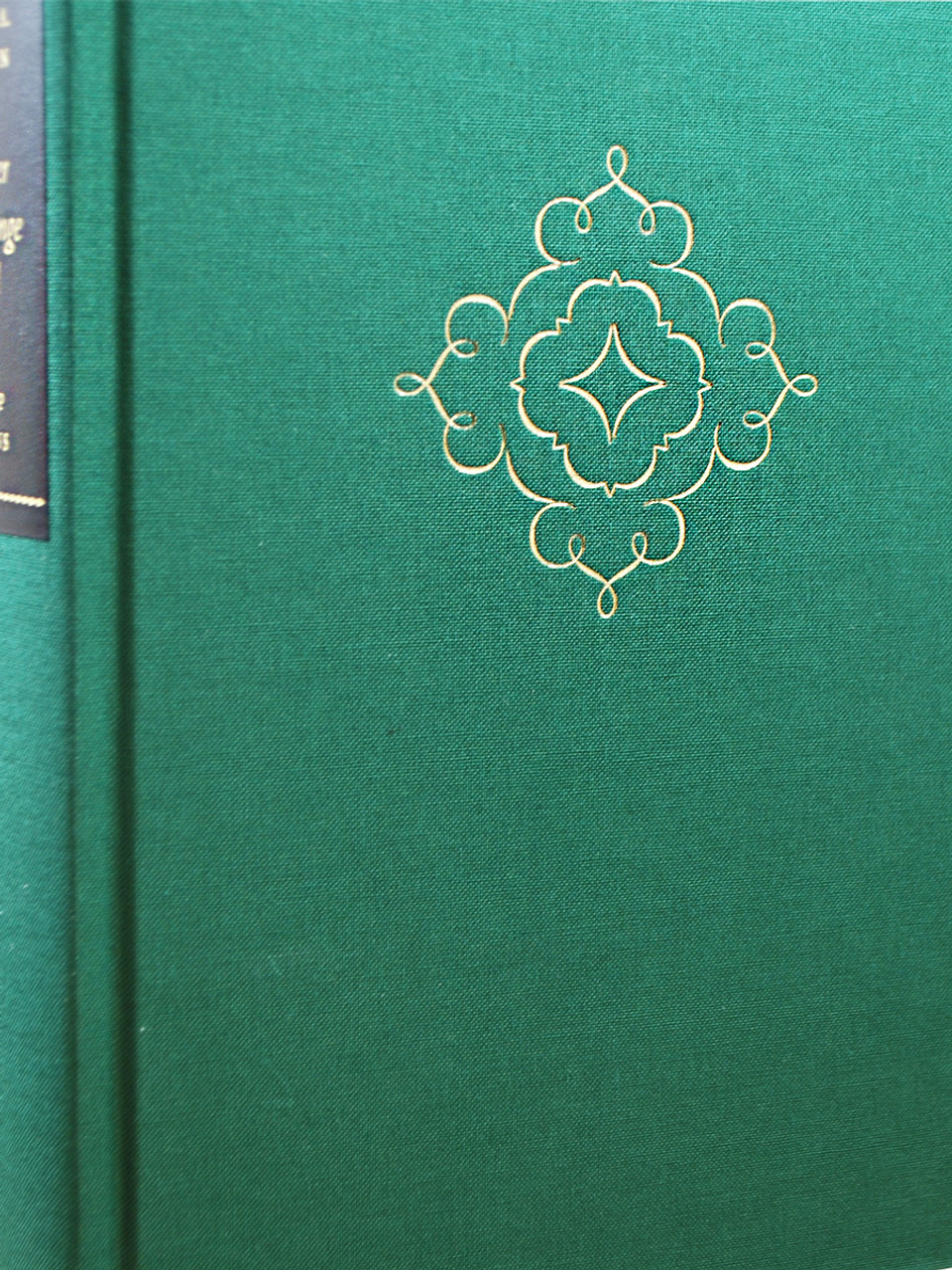 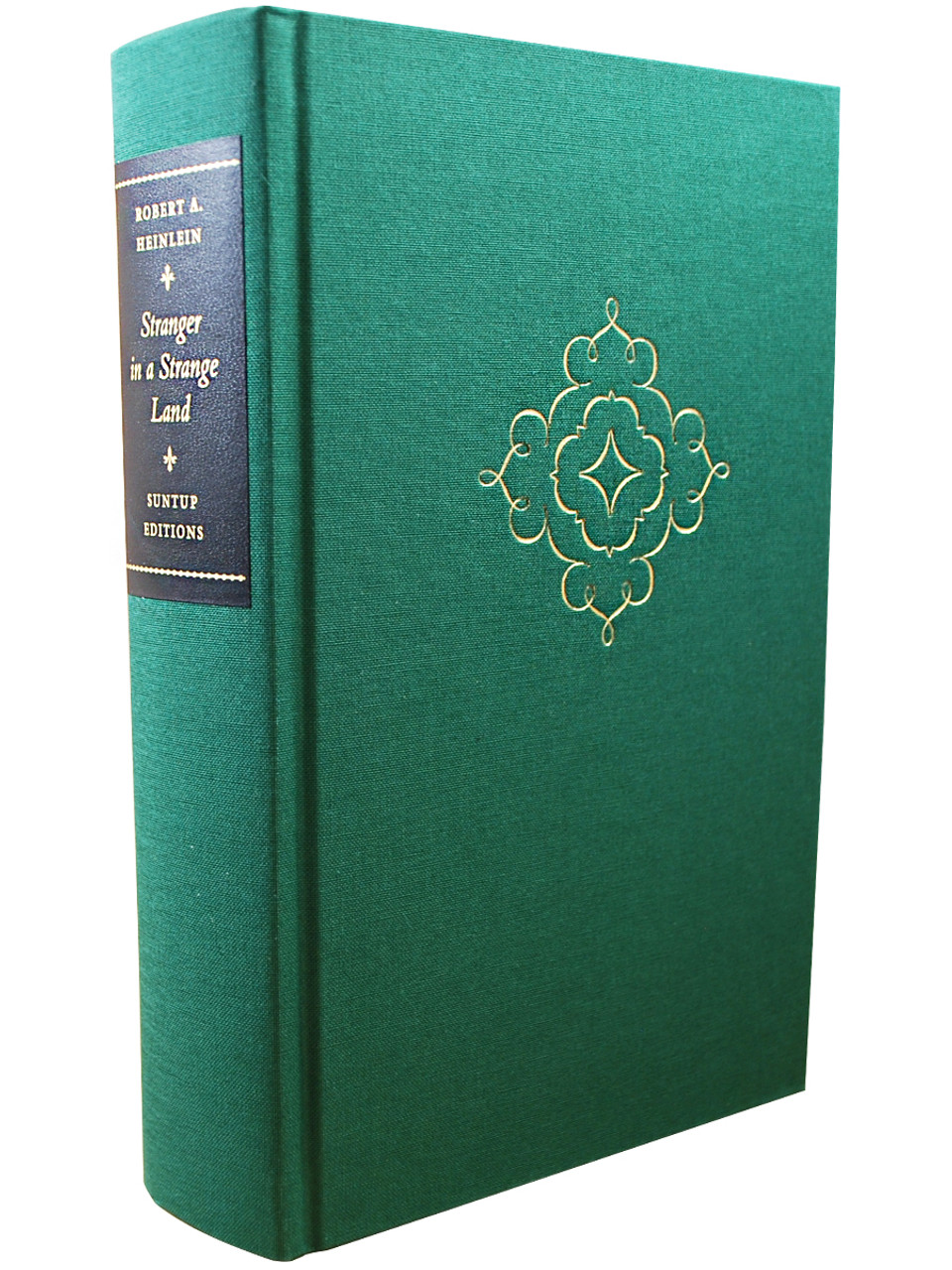 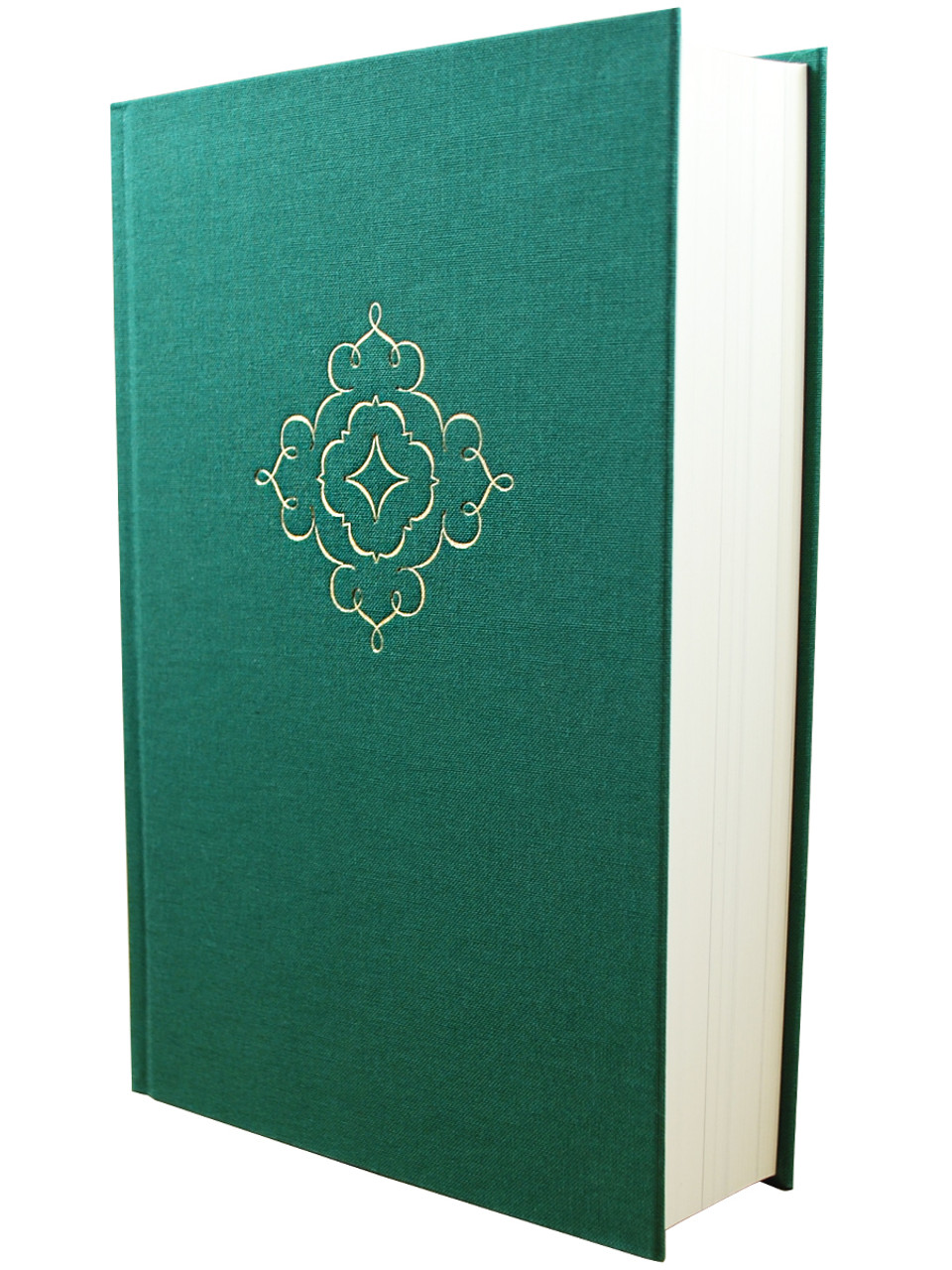 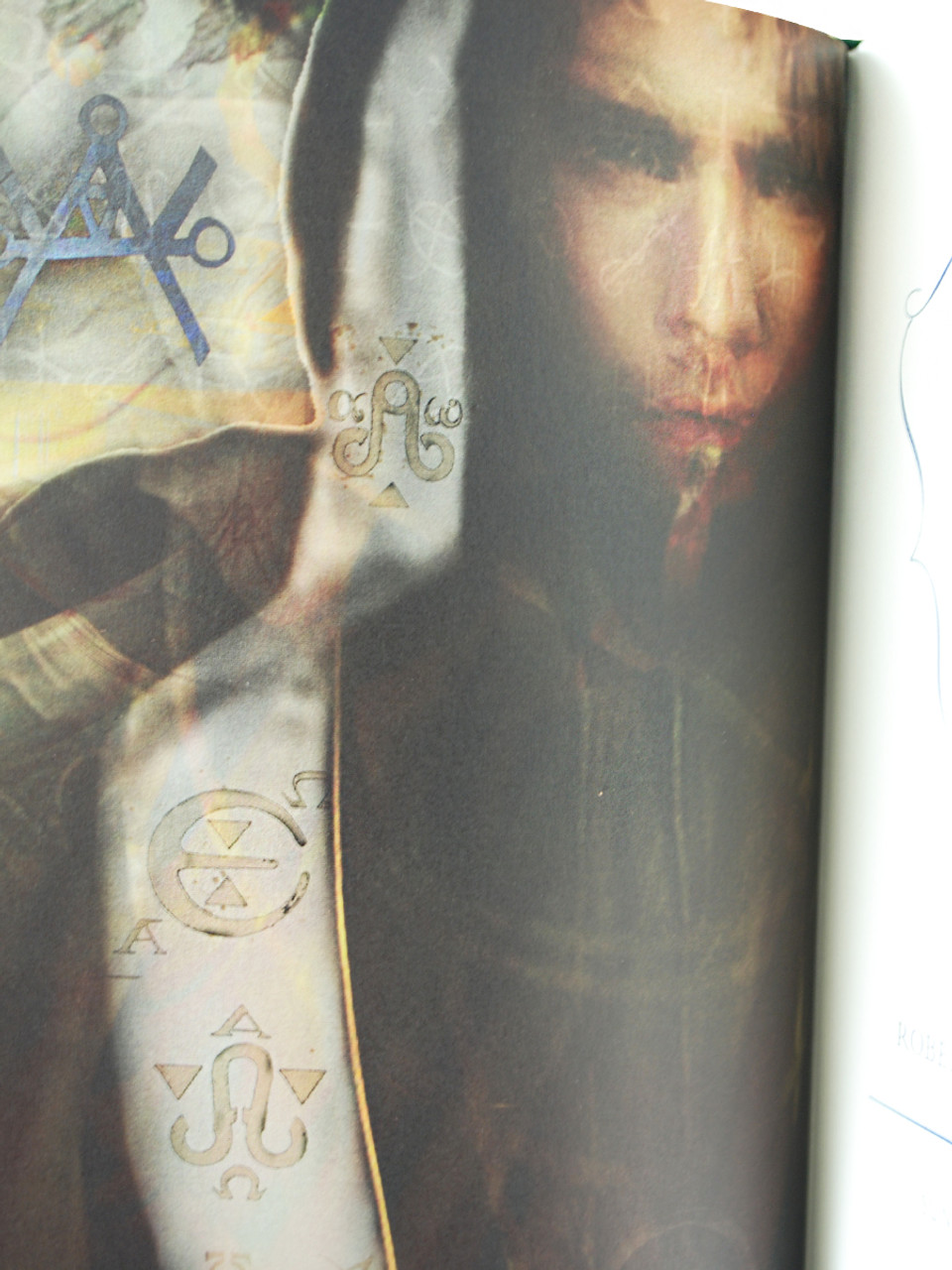 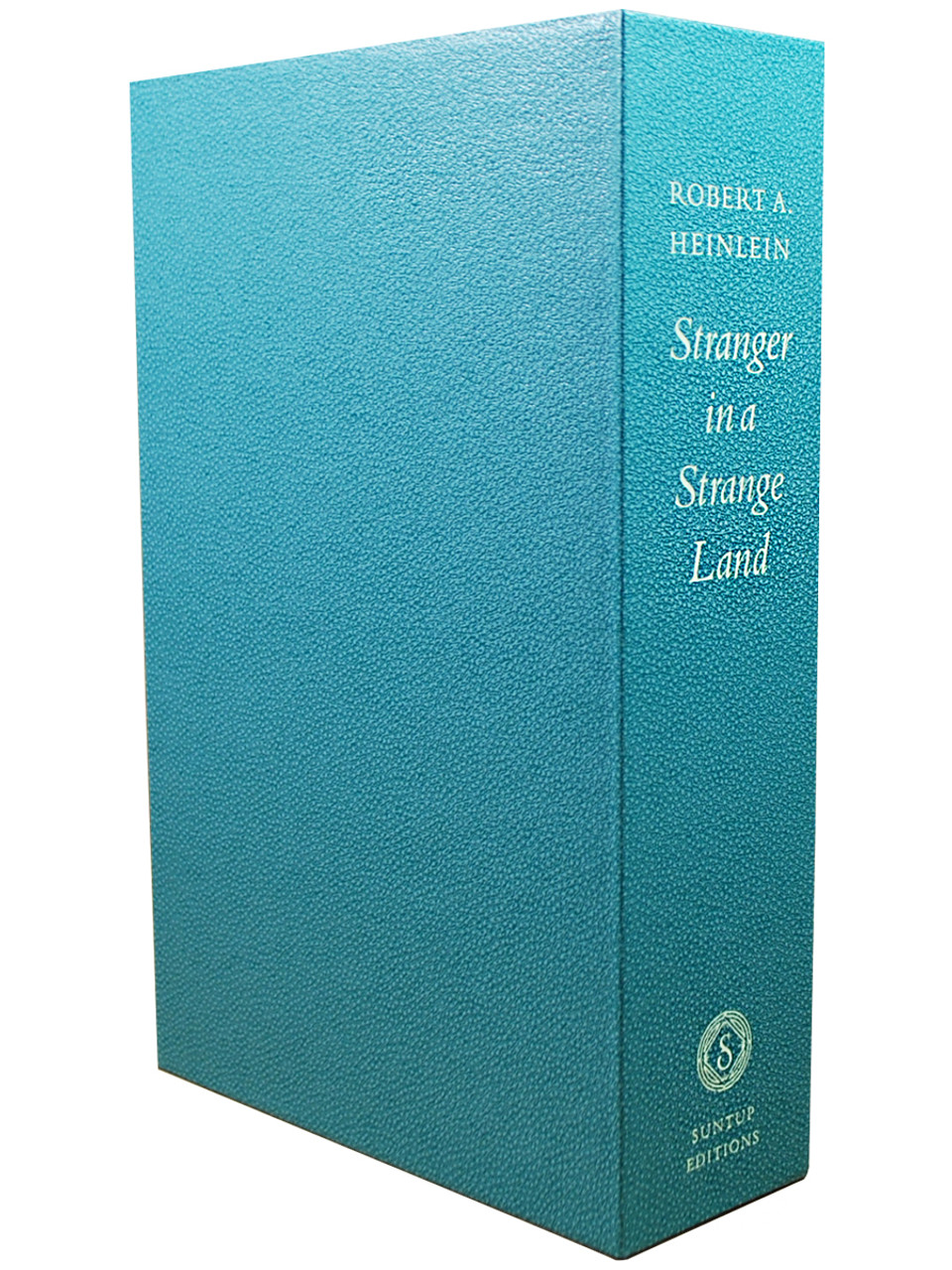 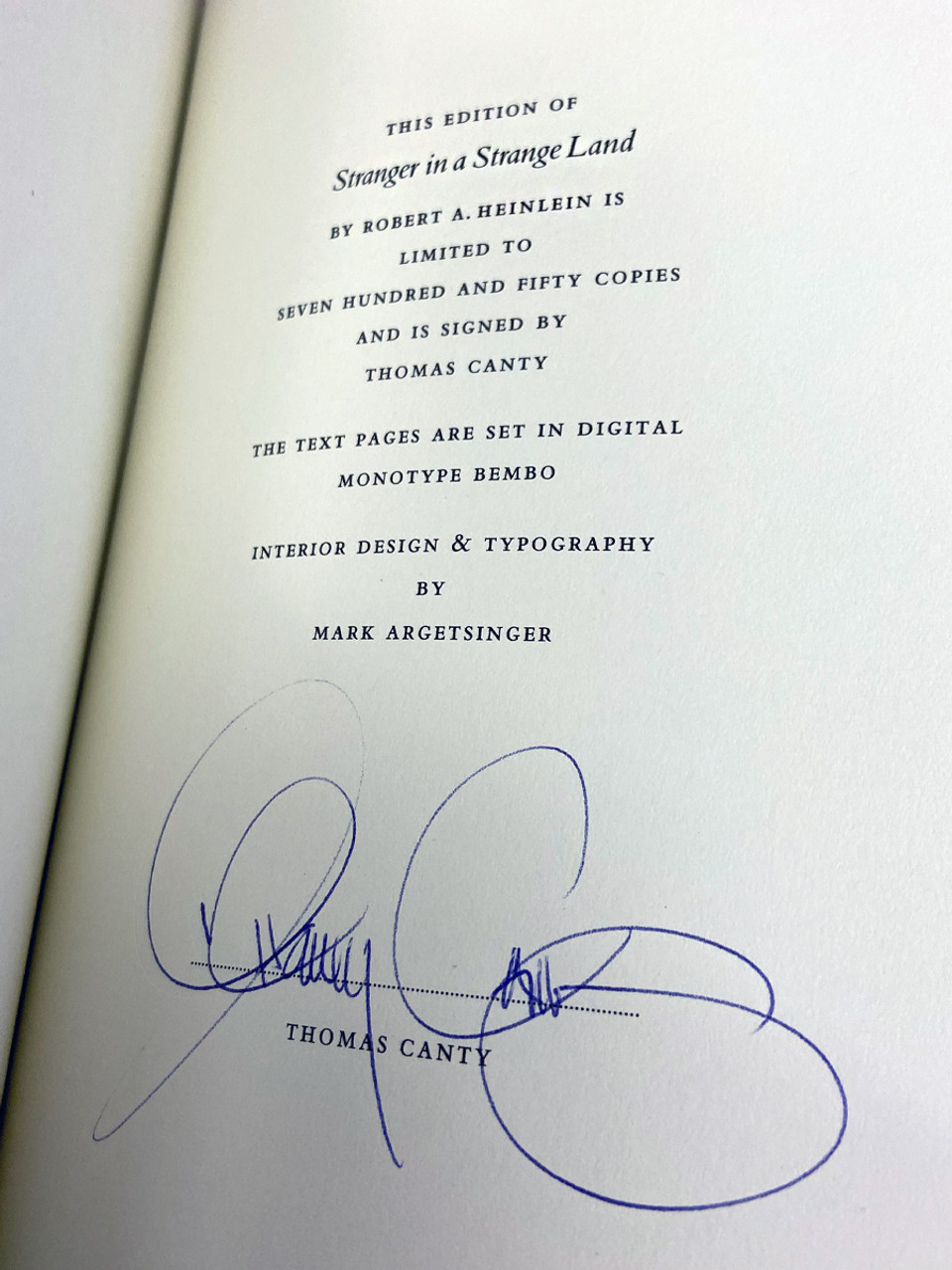 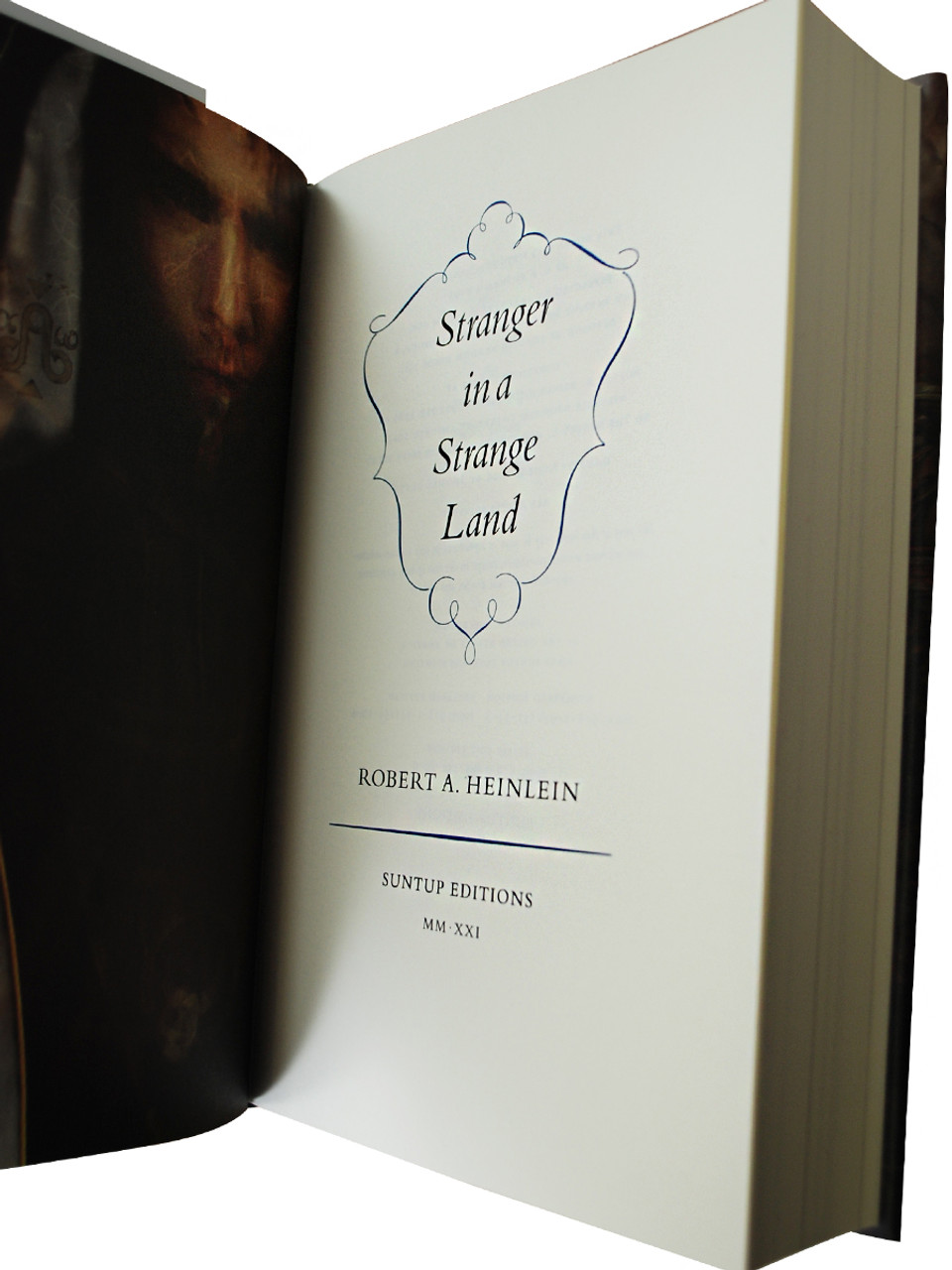 “A brilliant mind-bender...Wonderfully humanizing...The name of the leading character in Stranger in a Strange Land is as familiar to millions of literate persons as Oliver Twist or Holden Caulfield.”—Kurt Vonnegut, The New York Times Book Review

Suntup Editions 2021. Robert A. Heinlein "Stranger In a Strange Land". The Artist edition is limited to 750 copies with a dust jacket featuring a wrap-around illustration by Thomas Canty. It is a full cloth, smyth sewn binding with two-hits foil stamping. It is the only edition of the three with the dust jacket, and is signed by the artist. The edition is housed in an embossed paper covered slipcase.

LIMITED TO ONLY 750 SIGNED COPIES

The first science-fiction novel to enter The New York Times bestseller list, Robert A. Heinlein’s Stranger in a Strange Land is one of the genre’s most groundbreaking works of literary fiction.

Valentine Michael Smith is human, but he has never met another member of the human race. After being raised by Martians, he is sent to Earth, where he must learn what it means to be human. On this planet, he struggles to understand the social mores and prejudices of human nature that are so alien to him, while his own powers — including telepathy, clairvoyance, telekenesis, and teleportation — make him a God amongst humans.

Stranger in a Strange Land is Heinlein’s deliberate attempt to challenge social mores, exploring the meaning and relevance of institutions including religion, monogamy, money, and the fear of death. Generating considerable controversy upon its release, the novel was banned from school libraries and reading lists, while many reviewers took offense to what they assumed was Heinlein’s view of how society should be. Heinlein later stated, “I was not giving answers. I was trying to shake the reader loose from some preconceptions and induce him to think for himself, along new and fresh lines. … It is an invitation to think – not to believe.”

Stranger in a Strange Land won the Hugo Award for Best Novel in 1962.

About Stranger In a Strange Land

Stranger in a Strange Land is a 1961 science fiction novel by American author Robert A. Heinlein. It tells the story of Valentine Michael Smith, a human who comes to Earth in early adulthood after being born on the planet Mars and raised by Martians, and explores his interaction with and eventual transformation of Terran culture.

The title "Stranger in a Strange Land" is a direct quotation from the King James Bible (taken from Exodus 2:22). The working title for the book was "A Martian Named Smith", which was also the name of the screenplay started by a character at the end of the novel.

Heinlein's widow Virginia arranged to have the original unedited manuscript published in 1991, three years after Heinlein's death. Critics disagree[3] about which version is superior, but Heinlein preferred the original manuscript and described the heavily edited version as "telegraphese".

In 2012, the Library of Congress named it one of 88 "Books that Shaped America". 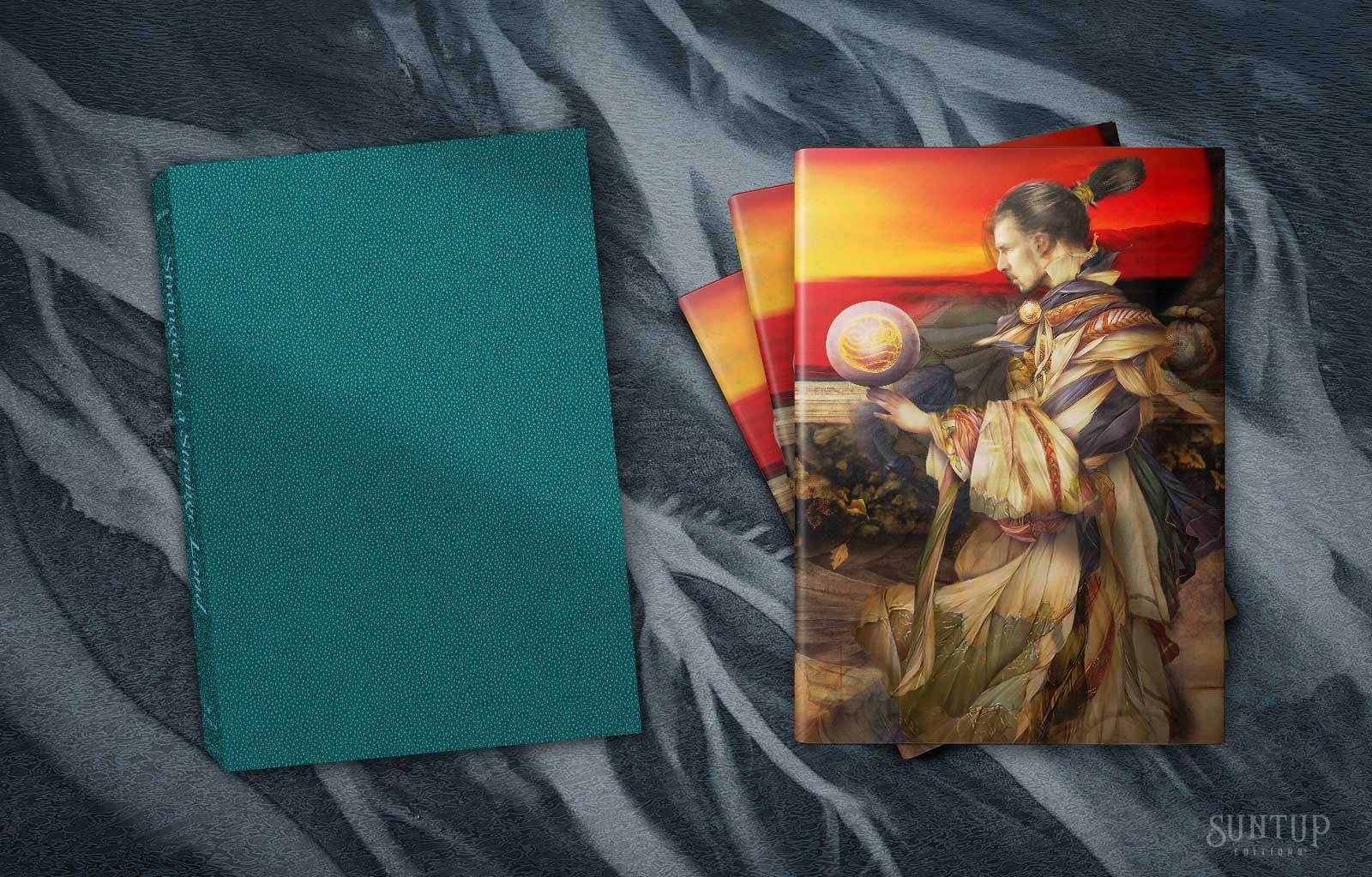 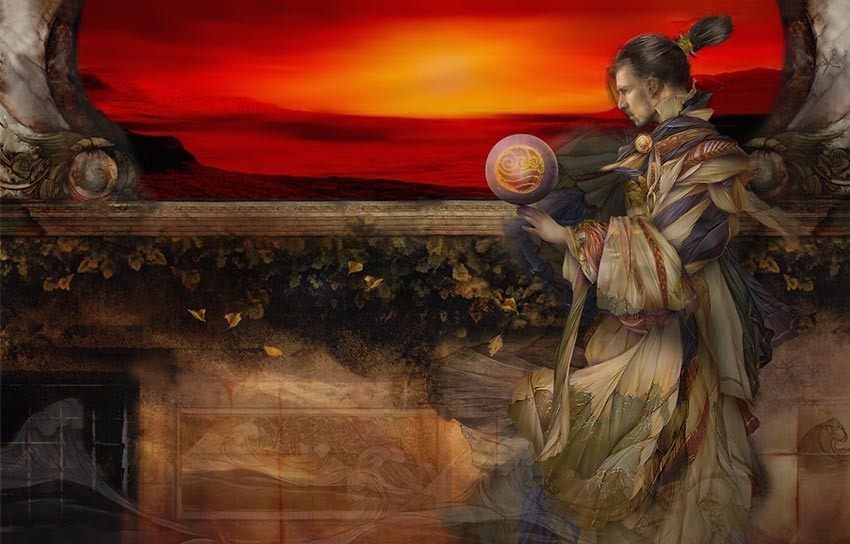 Robert A. Heinlein (1907-1988) was an American science-fiction author, aeronautical engineer, and retired naval officer. Sometimes referred to as the “dean of science-fiction writers,” he was among the first to emphasize scientific accuracy in his fiction. Heinlein published over one hundred novels, short stories, and articles in his life, and won six Hugo awards. His influence can be clearly seen in the writings of many important authors writing today.

Robert Anson Heinlein was born in Missouri in 1907, and was raised there. He graduated from the U.S. Naval Academy in 1929, but was forced by illness to retire from the Navy in 1934. He settled in California and over the next five years held a variety of jobs while doing post-graduate work in mathematics and physics at the University of California. In 1939 he sold his first science fiction story to Astounding magazine and soon devoted himself to the genre.
He was a four-time winner of the Hugo Award for his novels Stranger in a Strange Land (1961), Starship Troopers (1959), Double Star (1956), and The Moon is a Harsh Mistress (1966). His Future History series, incorporating both short stories and novels, was first mapped out in 1941. The series charts the social, political, and technological changes shaping human society from the present through several centuries into the future.

Robert A. Heinlein’s books were among the first works of science fiction to reach bestseller status in both hardcover and paperback. He continued to work into his eighties, and his work never ceased to amaze, to entertain, and to generate controversy. By the time he died, in 1988, it was evident that he was one of the formative talents of science fiction: a writer whose unique vision, unflagging energy, and persistence, over the course of five decades, made a great impact on the American mind. 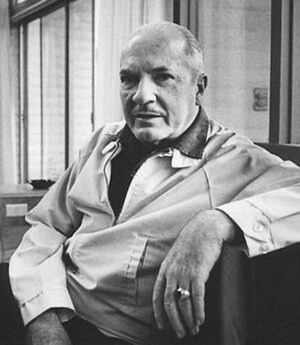 Thomas Canty was born and educated in Boston, and is a graduate of the Massachusetts College of Art and Design. He is a book designer, interior illustrator, book cover artist, and a founding member of The Newbury Studio. 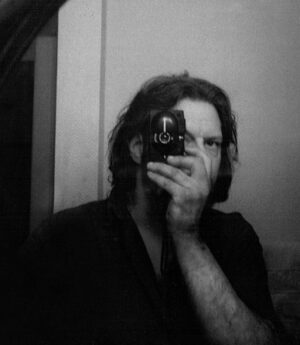 One of the grand masters of science fiction.”—Wall Street Journal

“A brilliant mind-bender...Wonderfully humanizing...The name of the leading character in Stranger in a Strange Land is as familiar to millions of literate persons as Oliver Twist or Holden Caulfield.”—Kurt Vonnegut, The New York Times Book Review

“This book was destined to become a bestseller, shaping the sensibilities of a generation.”—The Boston Globe

“One of the most popular science fiction novels ever published.”—Library Journal

VERY FINE GUARANTEED. Sealed. As New condition, as if normally shipped from the publisher. The condition is of the highest quality without any discernible flaws. Sharp corners all around. Unread book without any marks, writing, or stamps. This item will be packed to the highest standard and shipped in a timely manner by Priority Mail with tracking number and signature confirmation.

“A classic…If you want a great military adventure, this one is for you.”—All SciFi In Robert A. Heinlein’s controversial Hugo Award-winning bestseller, a recruit of the future goes through the...