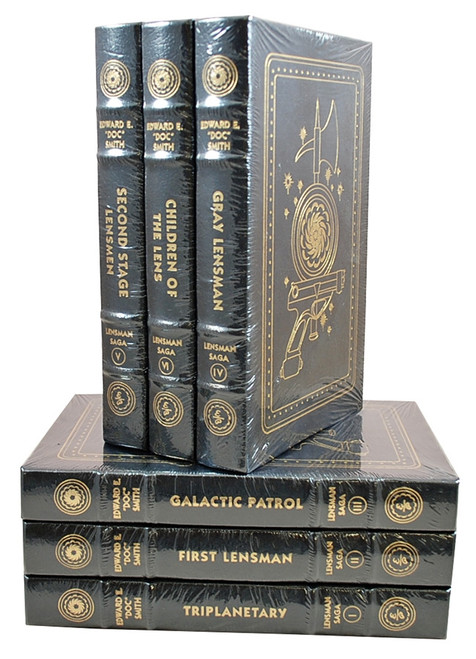 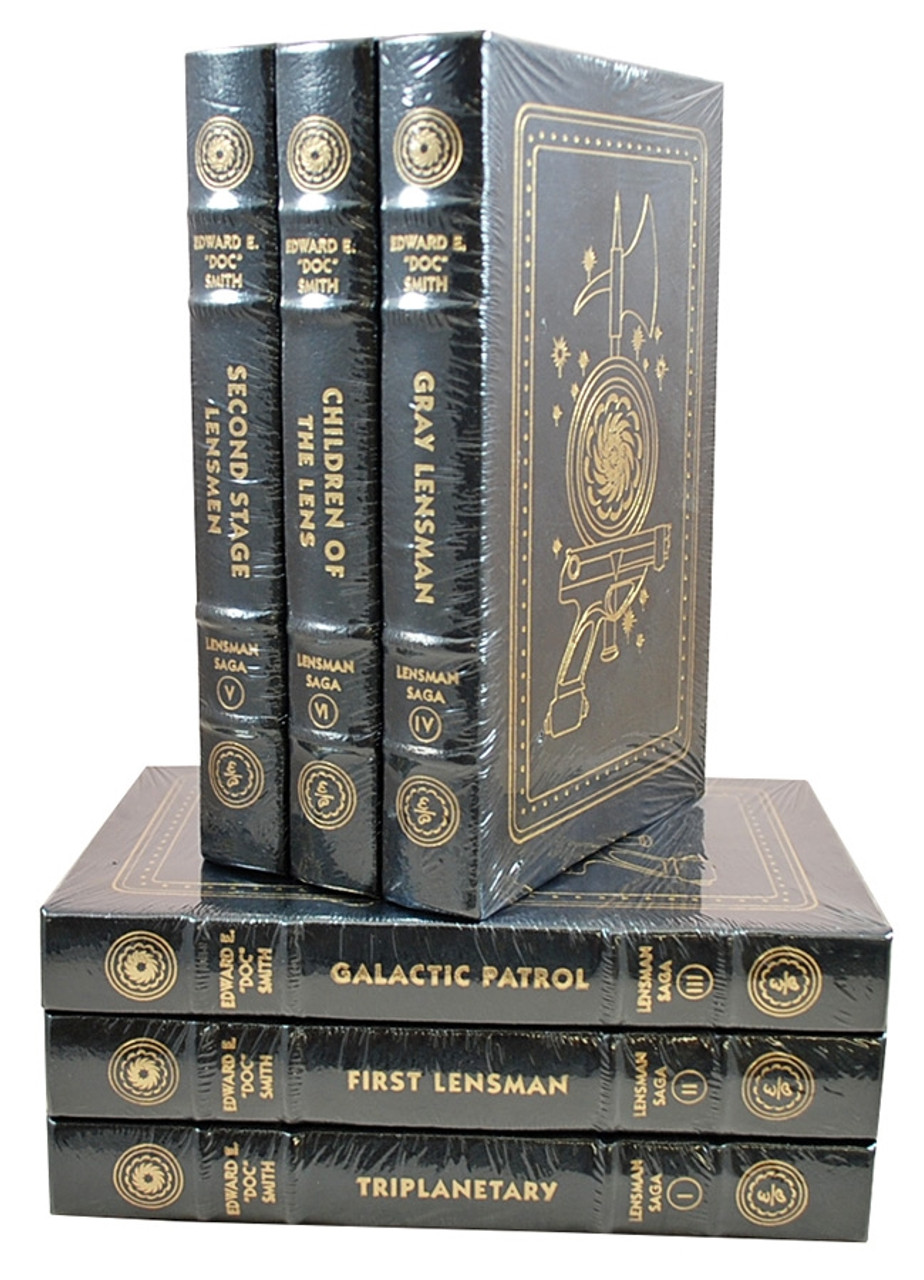 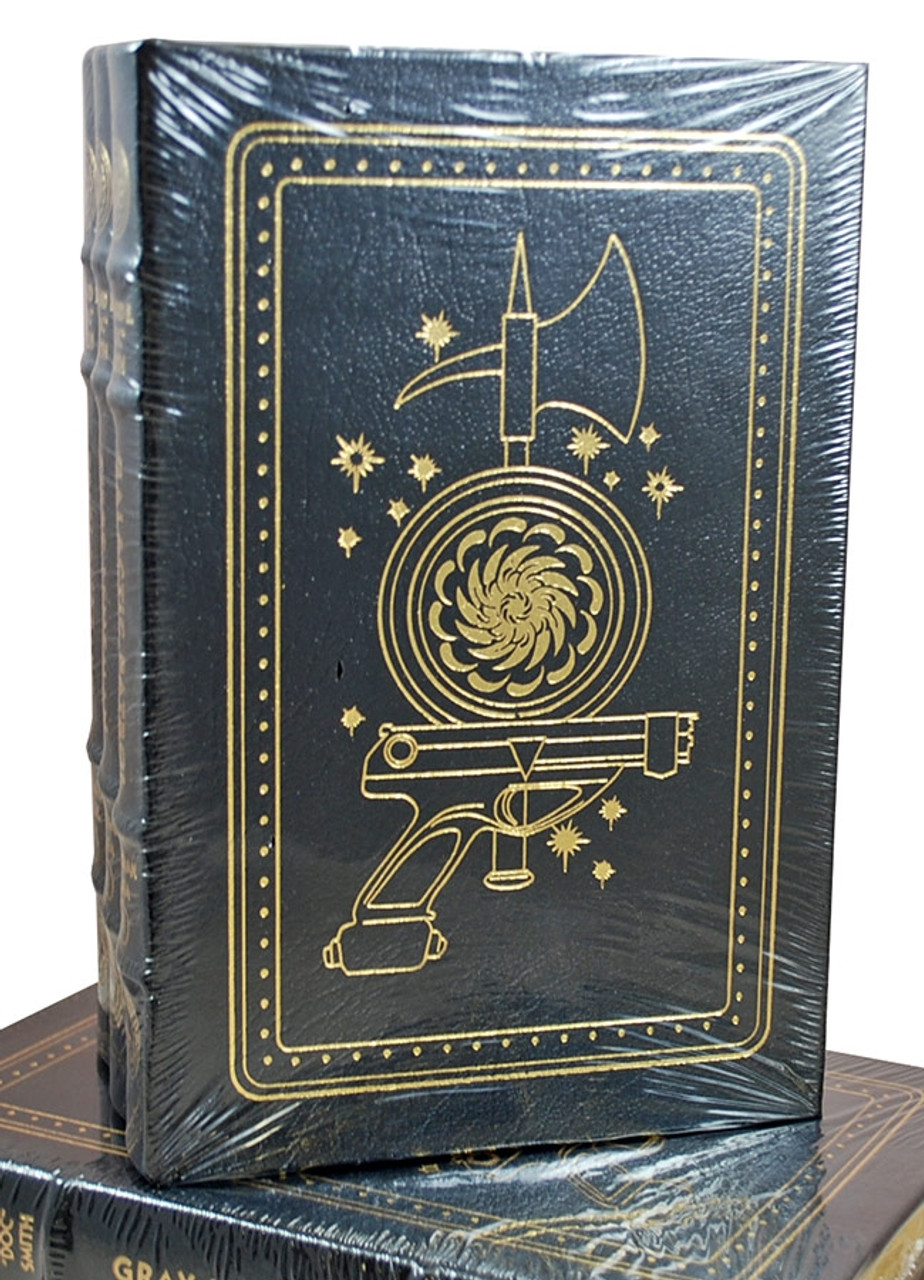 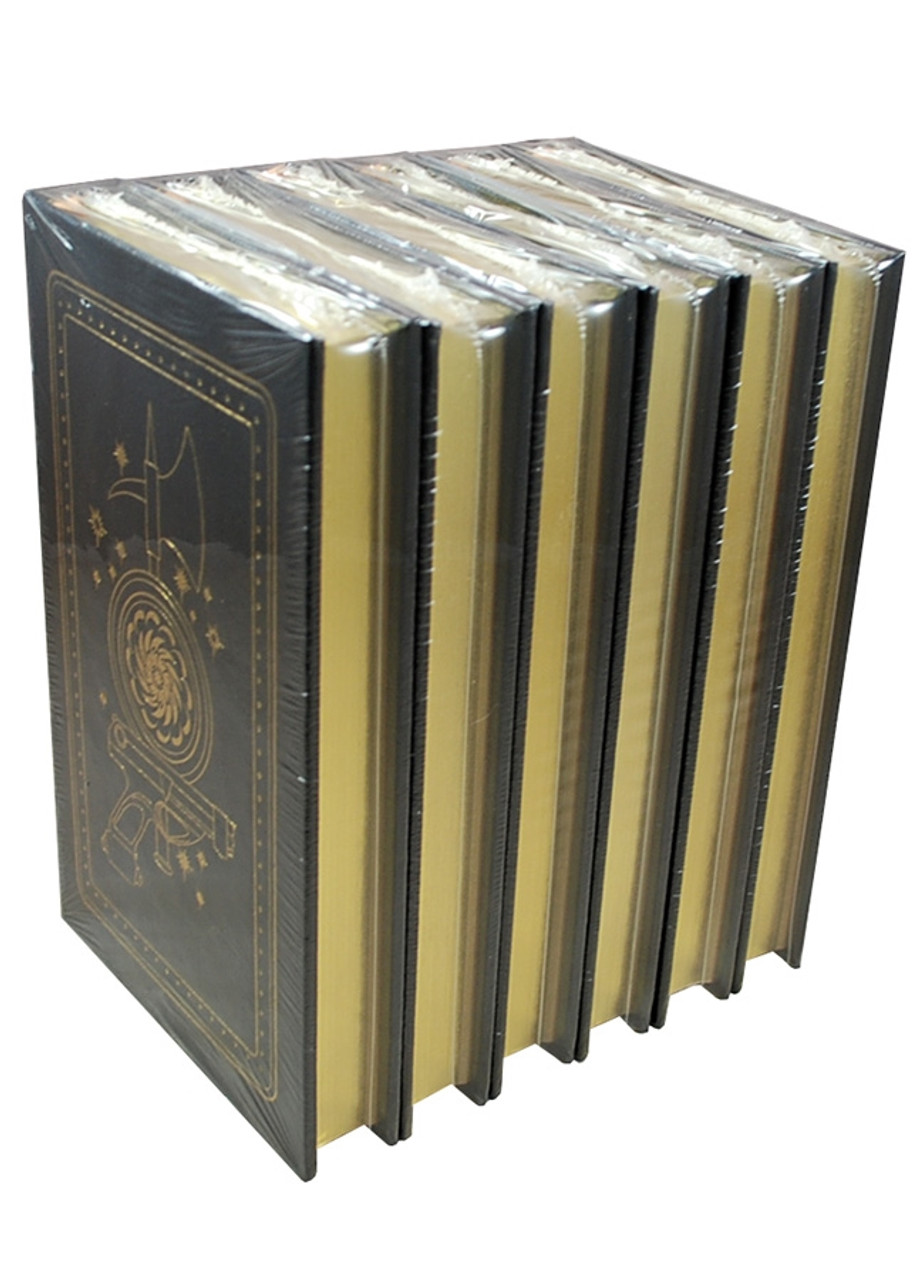 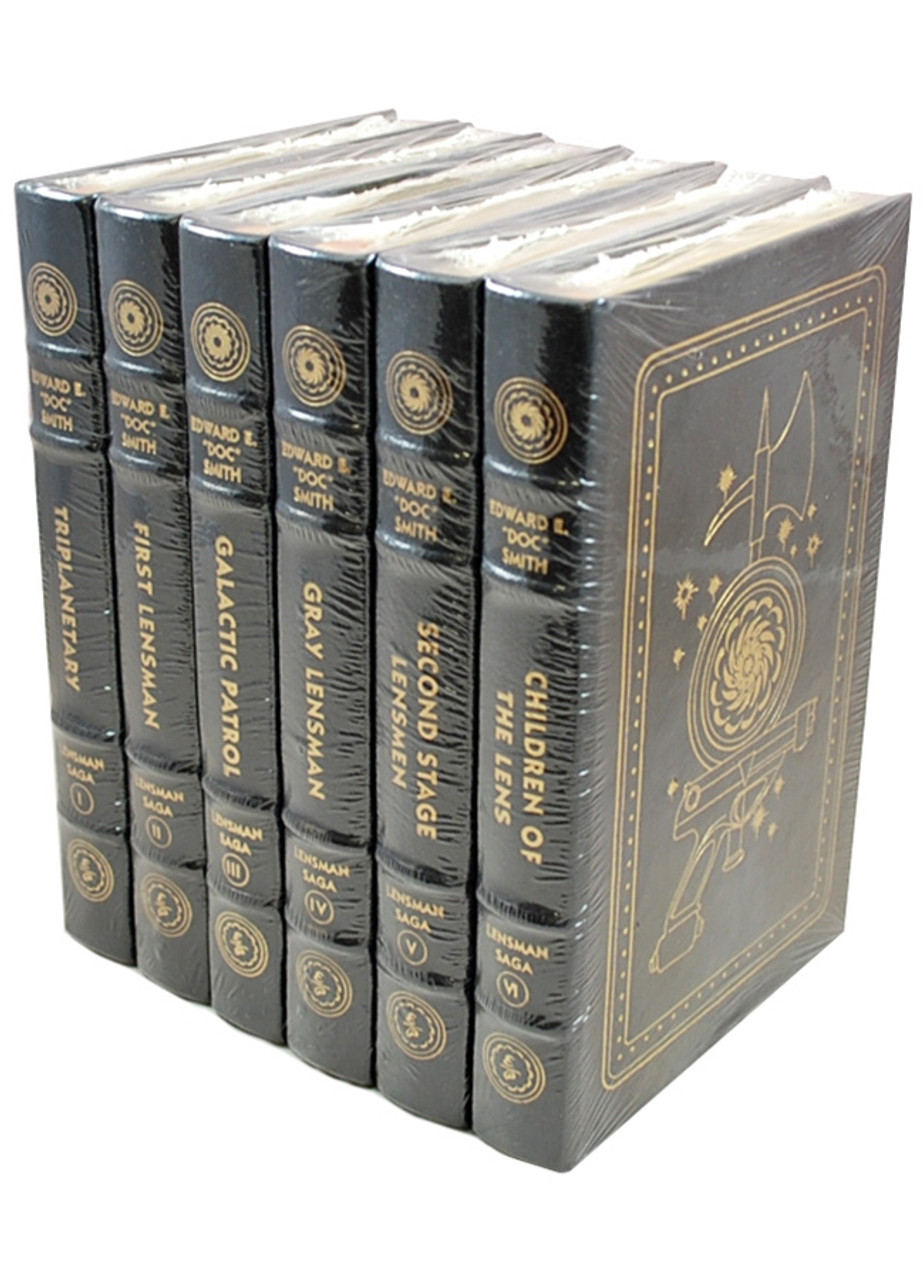 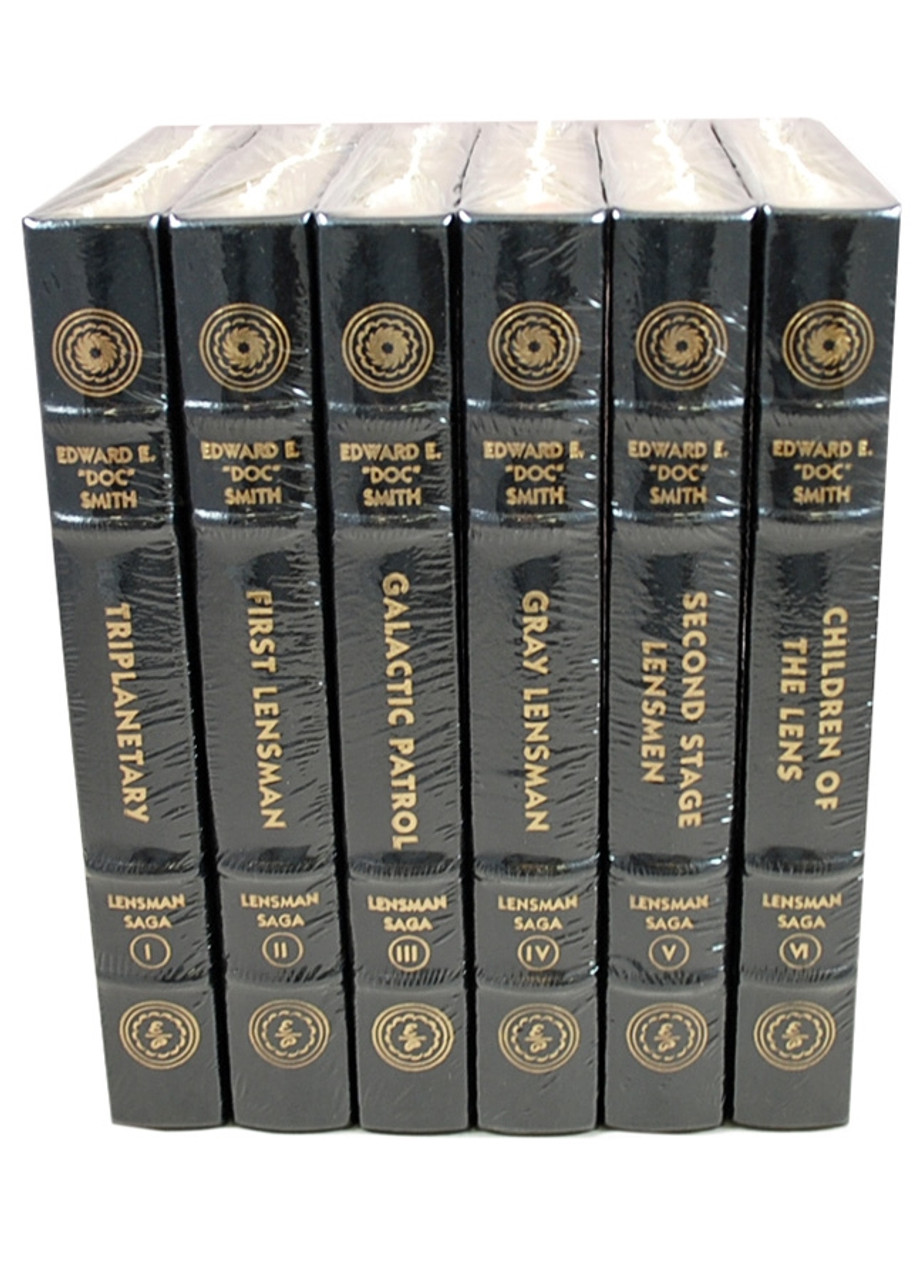 A six volume leather bound collection of the Lensman Saga, the incomparable epic of interstellar adventure from the great master of science fiction's Golden Age.

The Lensman series is a series of science fiction novels by American author Edward Elmer "Doc" Smith. It was a runner-up for the 1966 Hugo award for Best All-Time Series (the winner was the Foundation series by Isaac Asimov).

These volumes reproduce the lauded Fantasy Press editions of the 1940s and 50s and feature frontispieces of those editions' thrilling full-color dust jacket art.

This is the complete 6-volume set in one shipment:

Edward Elmer Smith (May 2, 1890 – August 31, 1965), better known by his pen name E. E. "Doc" Smith, was an American food engineer (specializing in doughnut and pastry mixes) and science-fiction author, best known for the Lensman and Skylark series. He is sometimes called the father of space opera.

Triplanetary was first serialized in Amazing Stories in 1934 and it later on formed the first of the Lensman series, where it set the stage for what is one of the greatest space-opera sagas ever written. This original publication brings us to a distant planet inhabited by a highly developed aquatic race called the Nevians. They have managed to harness the atomic power of iron and have an enormous need for the metal to generate energy, but their planet has virtually no iron reserves.

They build a spaceship to venture into the universe and find iron. Eventually they discover that Earth has huge amounts of iron and the Nevians start to extract all the iron out of Pittsburgh with a special ray. This ray shoots into the city and immediately vaporizes and removes any iron from the buildings, machines, earth, and even from human blood. It is up to Conway Costigan, a mercilessly competent, two-fisted whiz agent of the military Triplanetary Service, and his colleagues to save the planet.

The enemy spacefleet arrowed toward the armored mountain—nerve center of the Galactic Patrol. The Patrol battle cruisers swerved to meet them, and a miles-long cone of pure energy ravened out at the invaders, destroying whatever it touched.

But the moment before the force beam struck, thousands of tiny objects dropped from the enemy fleet and, faster than light, flashed straight at their target—each one an atom bomb powerful enough to destroy Patrol Headquarters by itself! The Galactic Patrol—and civilization itself—had seconds to live. Unless a miracle happened...

The second book of the Lensman Series, a runner-up for the Hugo award for Best All-Time Series.

The Lensmen are the most feared peacekeepers in the Galaxy. The ‘Lens’, a telepathic jewel matched to the ego of its wearer, is the ultimate weapon in the war against the merciless pirate Boskone and his forces of lawlessness. The only problem is the Galactic Patrol isn’t sure how to capitalize on the Lens’ incredible powers, but new graduate Kimball Kinnison is determined to learn. Taking command of the experimental fighting ship, the Brittania, Kinnison and his crew set off on a journey of harrowing adventures, coming face to face with deadly space creatures and evil pirates...

Gray Lensman is a science fiction novel by author E. E. Smith. It was first published in book form in 1951 by Fantasy Press in an edition of 5,096 copies. The novel was originally serialized in the magazine Astounding in 1939. Gray Lensman is the fourth (originally the second) book in the classic Lensman series and the second to focus on the adventures of Lensman extraordinaire Kimball Kinnison.

Kim Kinnison, Number One man of his time, had faced challenges before - but rarely one as daunting as this. To him fell the perilous task of infiltrating the inner circle of Boskone, stronghold of galactic civilization’s most deadly foe. Kinnison had to become a local Boskonian in every gesture, deed - and thought. He had to work his way up through the ranks of an alien enemy organization, right into the highest echelons of power. Then it would be he who issued the orders - orders that would destroy his own civilization…


Children of the Lens

Twenty years have passed since the events in Second State Lensman. Kimball Kinnison and his wife, Clarrissa, now have five children - the "Children of the Lens". As the offspring of generations of selected matings, they are the most brilliant and capable minds in the universe. Their mission: to conclude the Boskonian war. Children of the Lens is the sixth and concluding volume of the classic Lensman series, long recognized as the greatest space opera ever written.

VERY FINE GUARANTEED. Sealed. All six volumes are in mint condition without any discernible flaws. The condition is of the highest quality. Sharp corners that have not been bumped. Unread books.