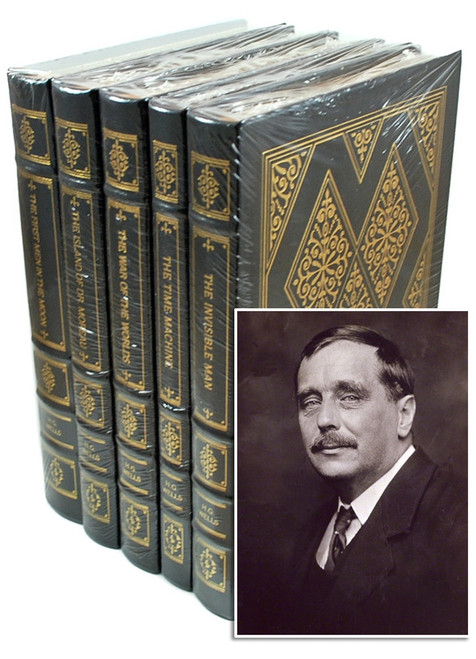 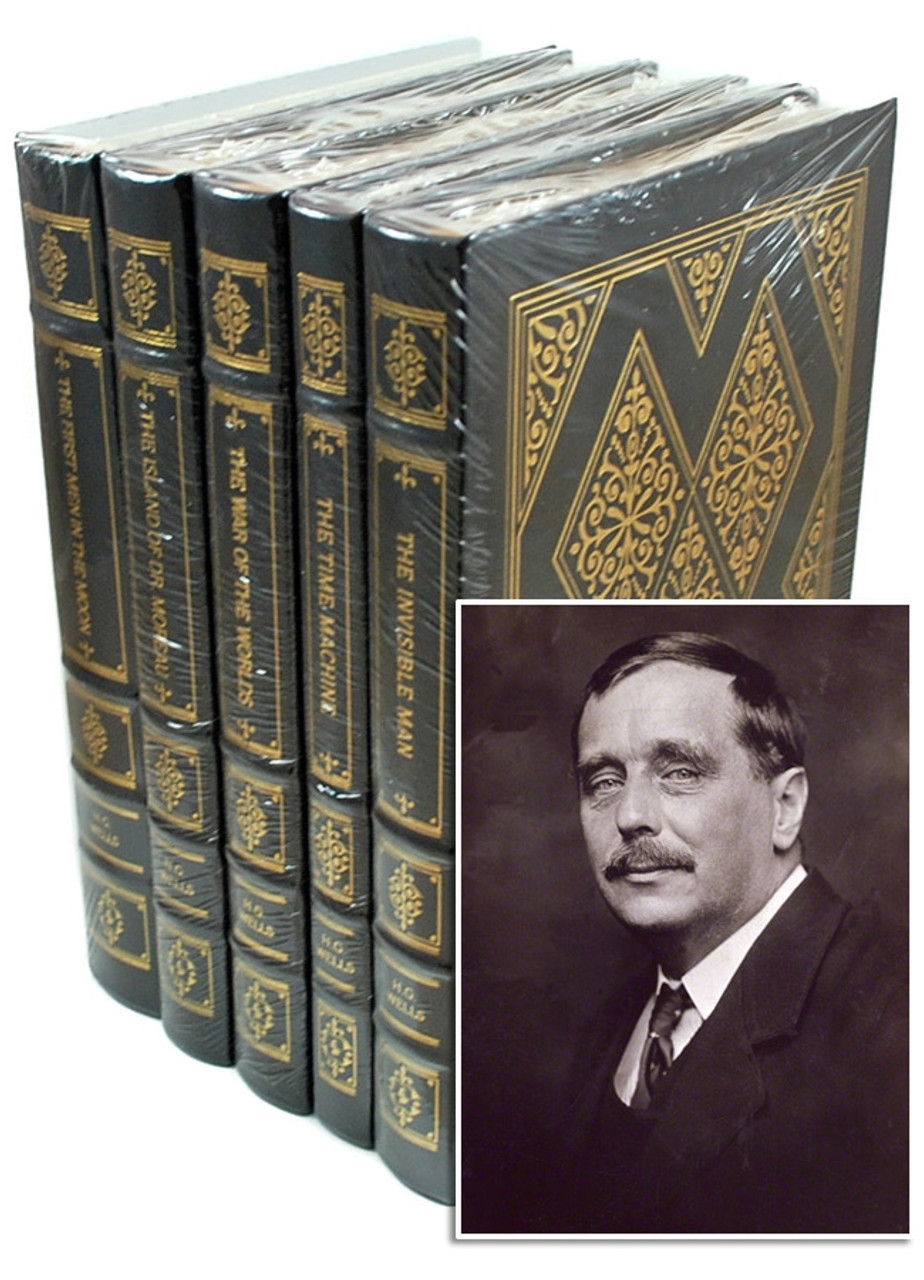 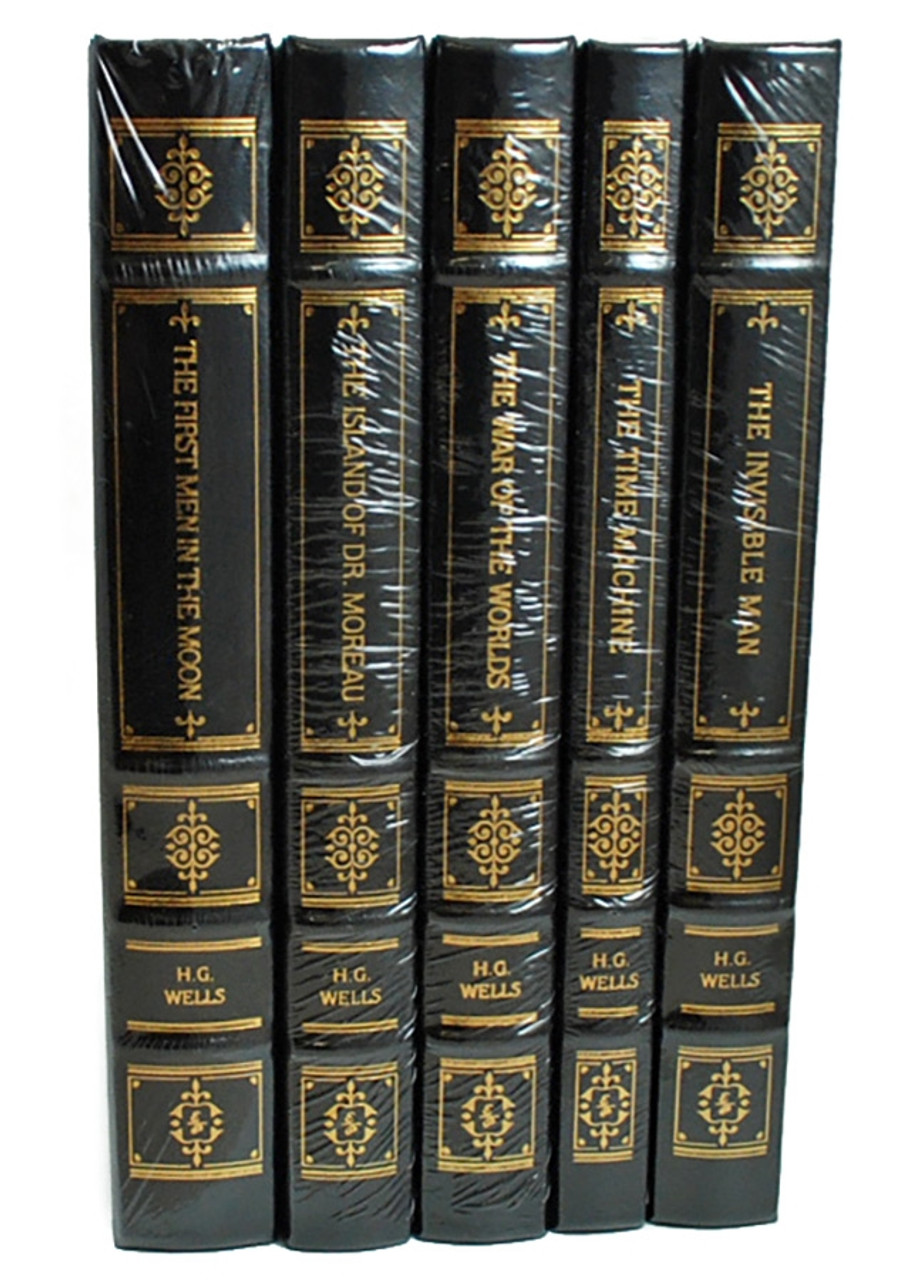 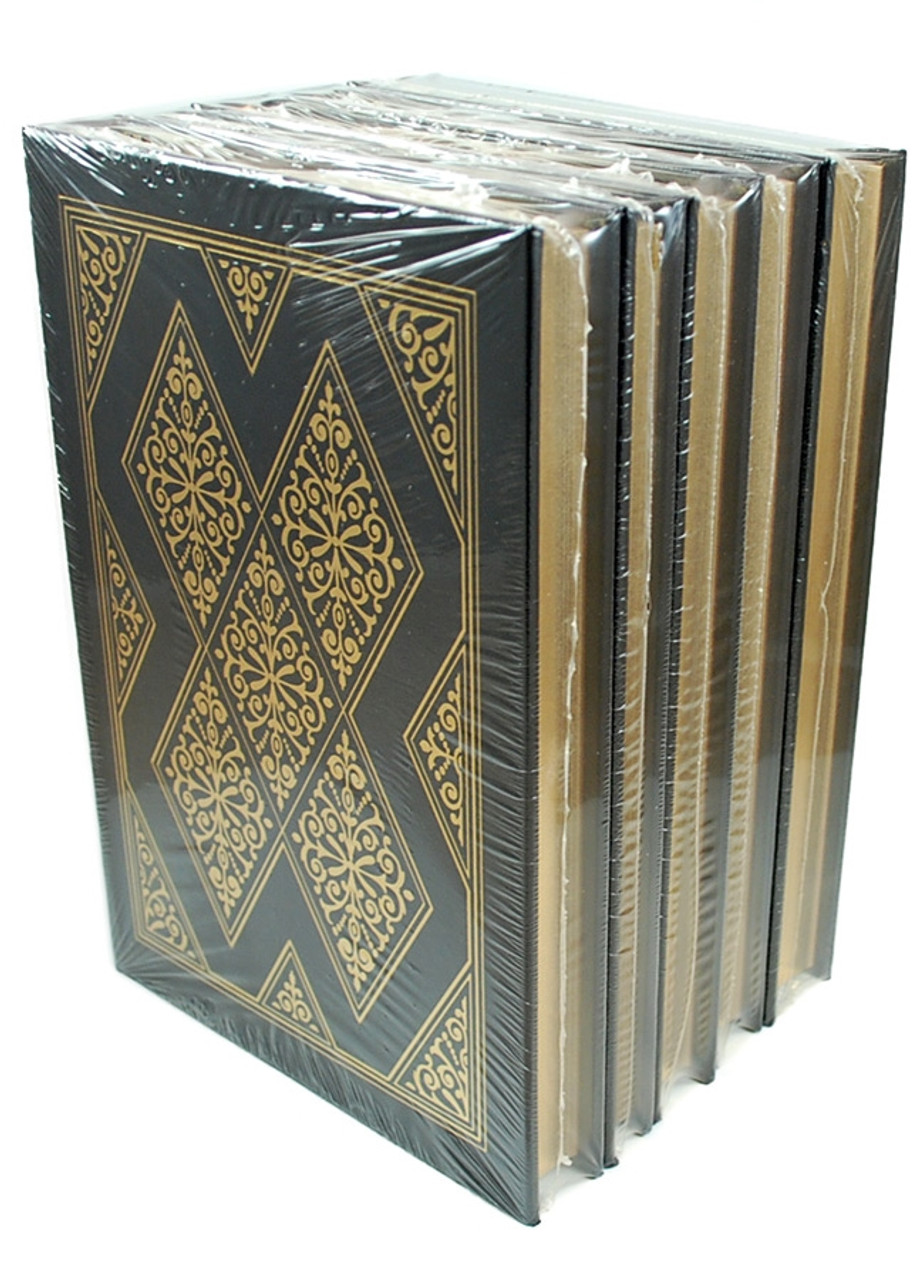 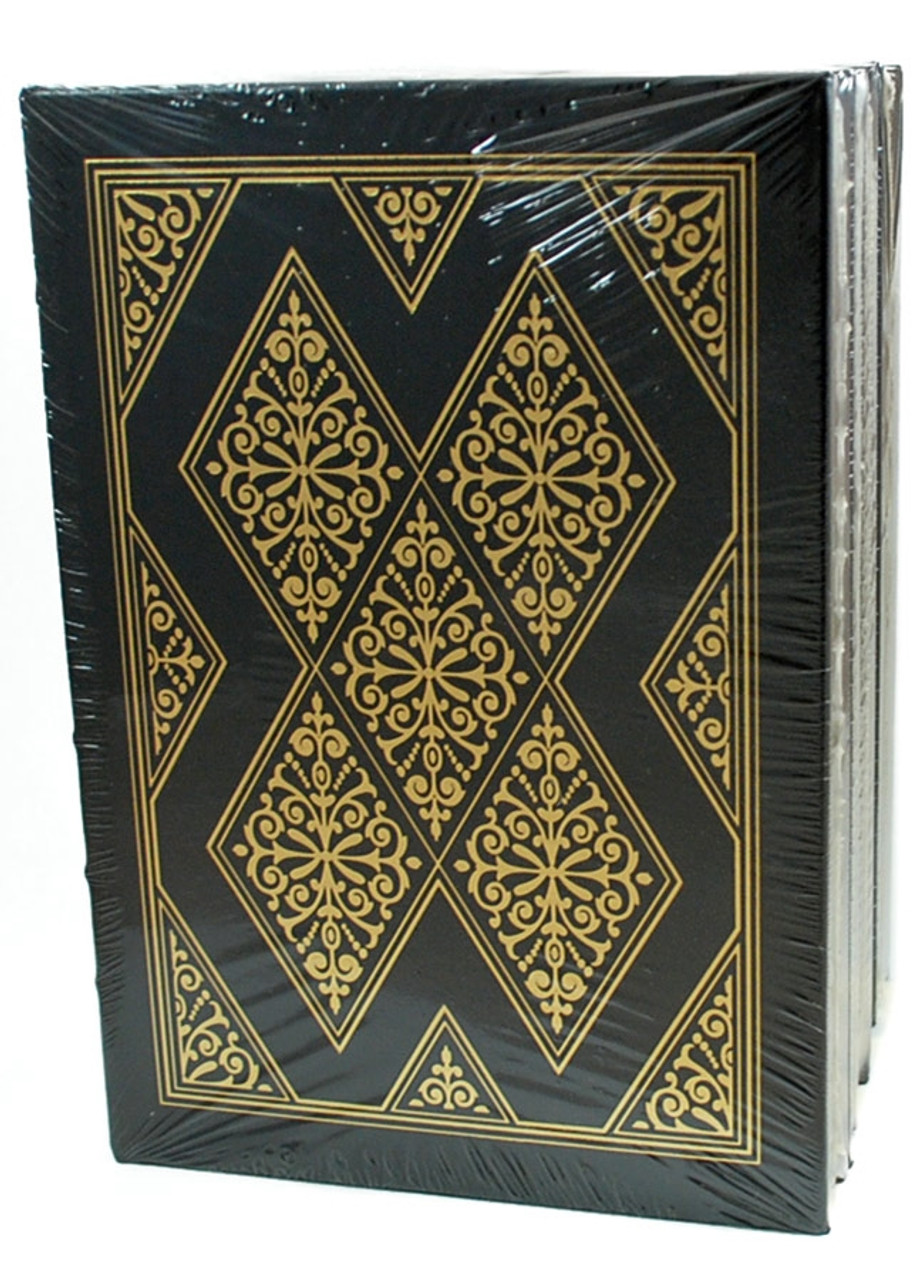 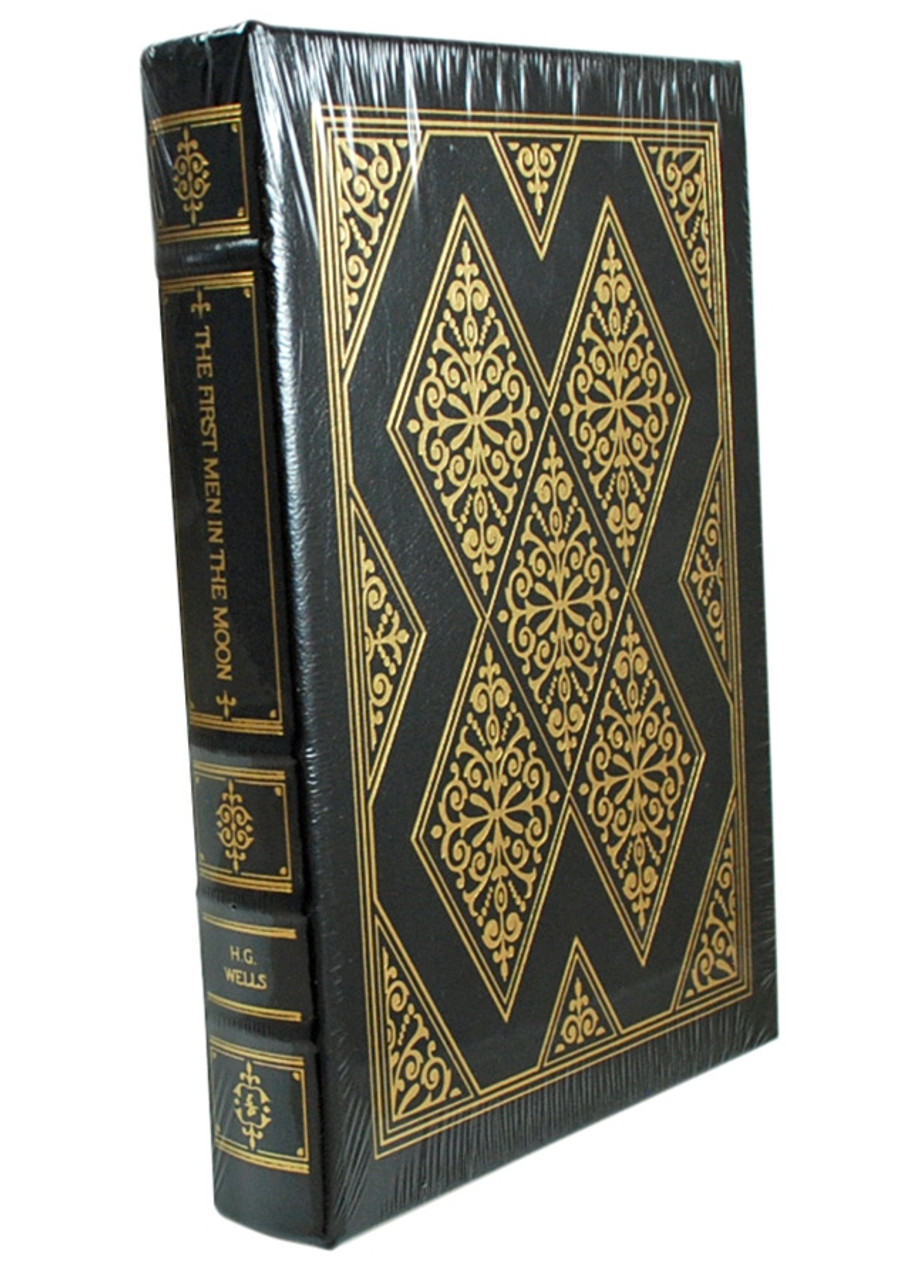 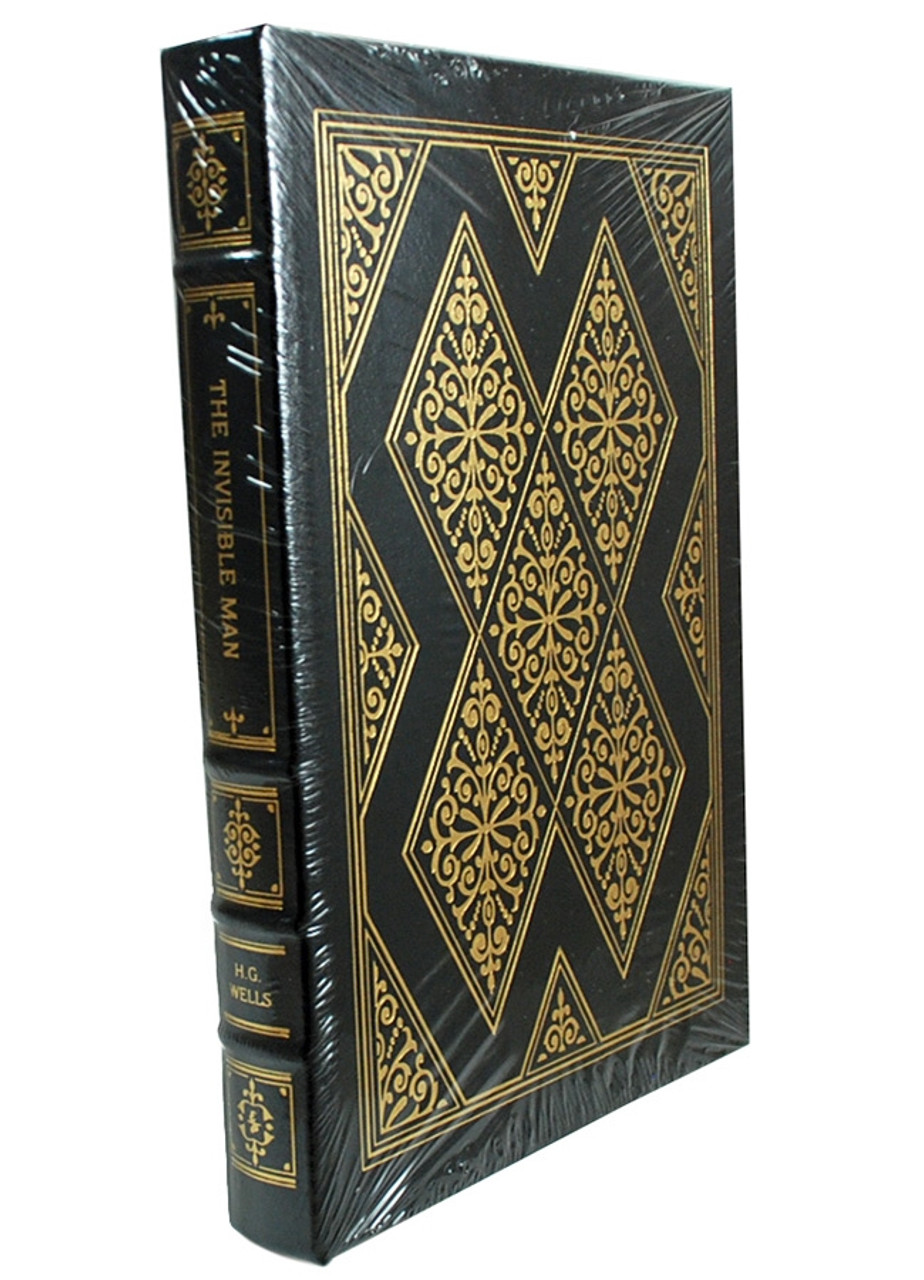 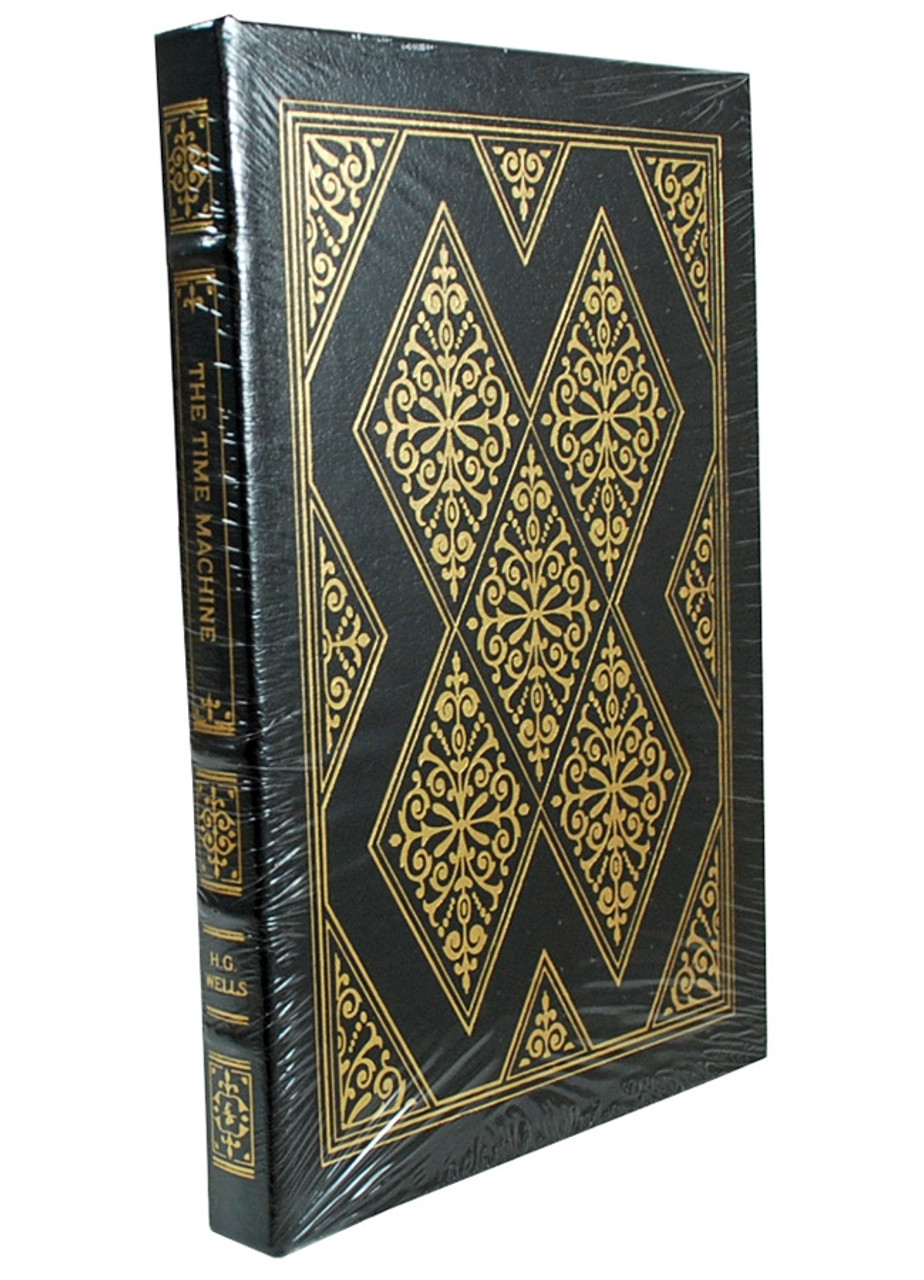 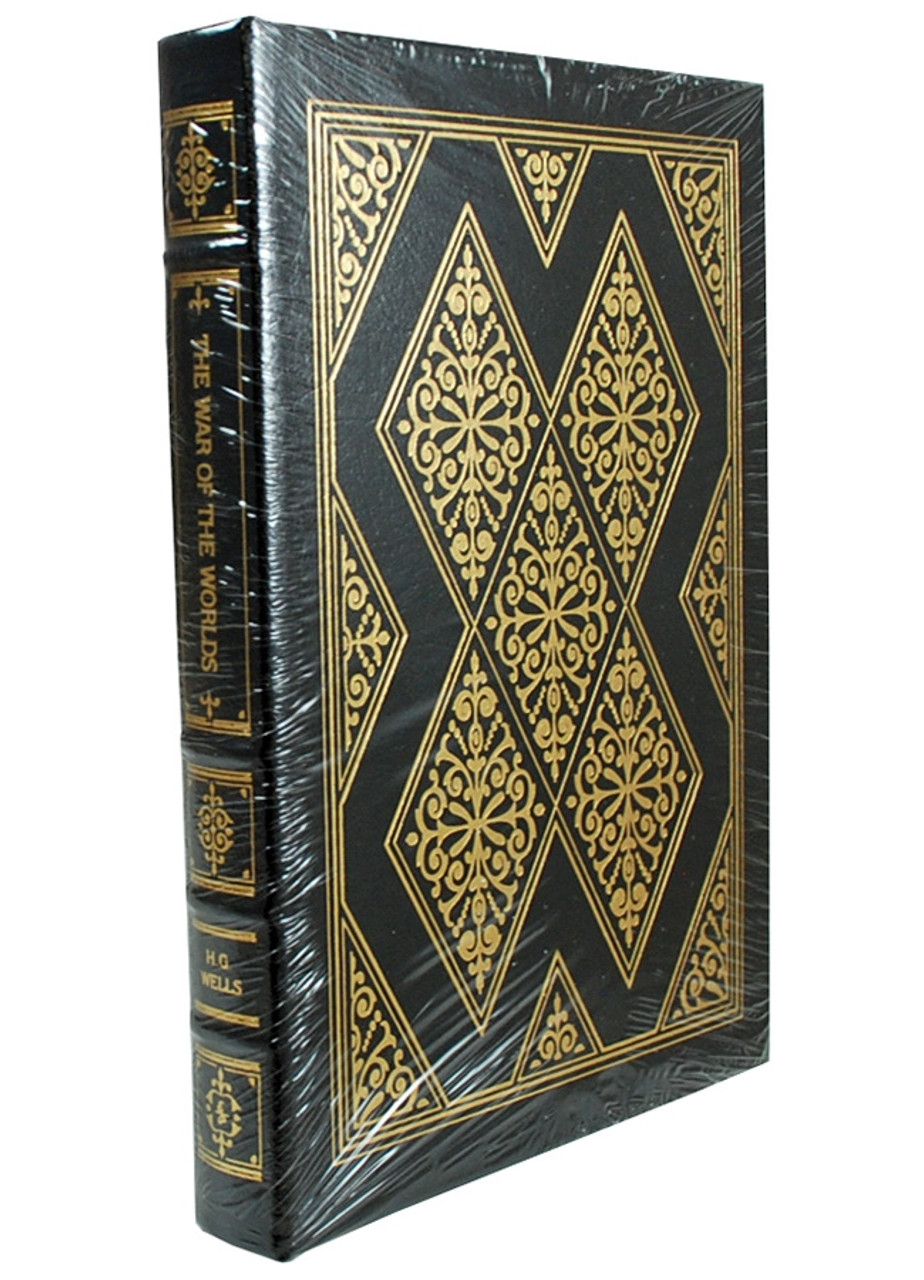 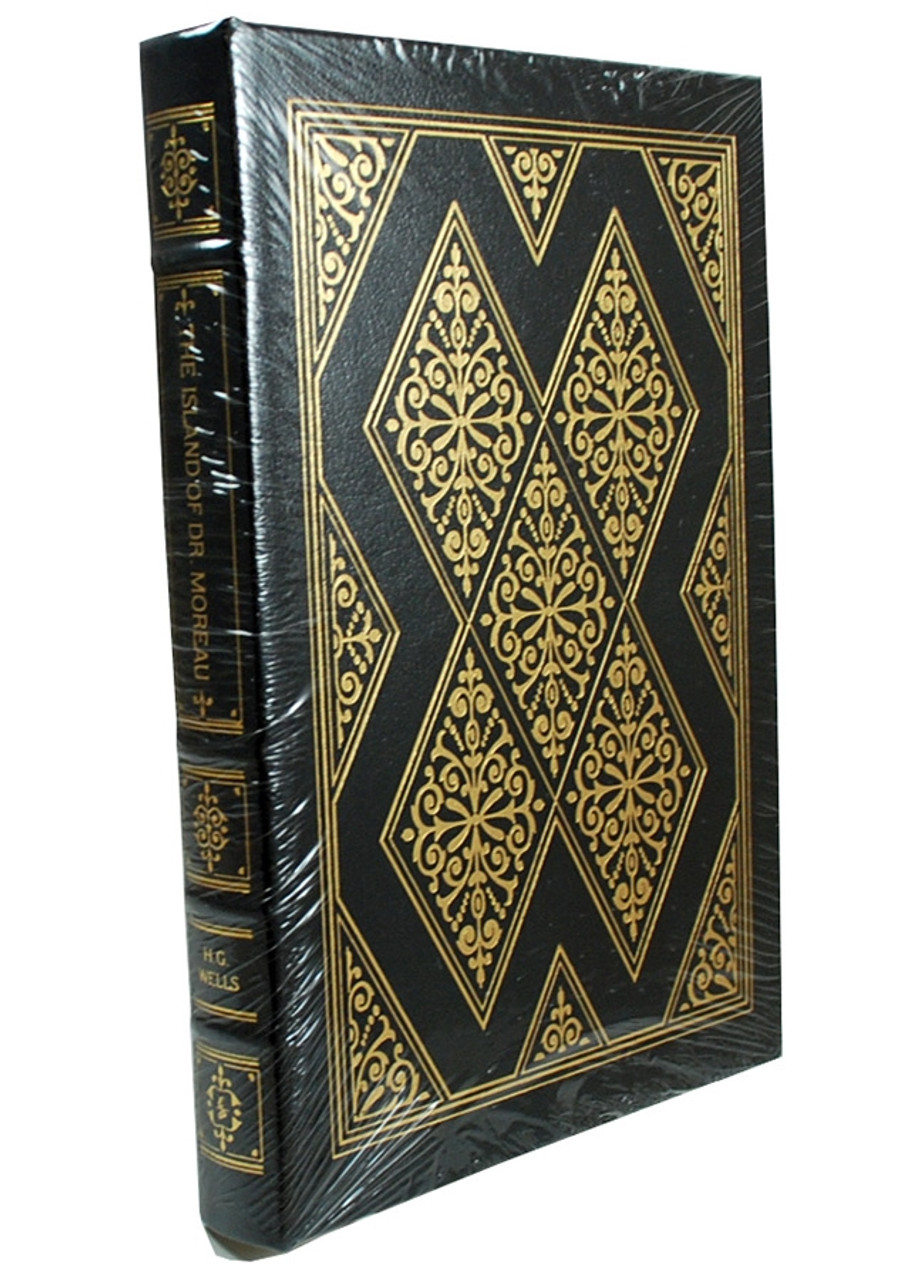 The Classic Novels of H.G. Wells, Limited to only 500 Hand-Numbered Sets


Easton Press, Norwalk, CT. H.G. Wells "The Classic Novels in Five Volumes". Limited edition of only 500 produced. Full genuine leather. This numbered set edition was strictly limited to a quantity of only 500 sets. The limited edition set number is hand-inscribed on the title page of Volume 1, The First Men in The Moon. The First Men In The Moon features vintage 1901 illustrations.

This set includes a Limited Edition certificate with hand-inscribed set number inserted loosely inside the front cover of The First Men in The Moon.


The First Men in The Moon

The First Men in the Moon is a scientific romance by the English author H. G. Wells, originally serialised in The Strand Magazine from December 1900 to August 1901 and published in hardcover in 1901,[2] who called it one of his "fantastic stories".[3] The novel tells the story of a journey to the Moon undertaken by the two protagonists: a businessman narrator, Mr. Bedford; and an eccentric scientist, Mr. Cavor. Bedford and Cavor discover that the Moon is inhabited by a sophisticated extraterrestrial civilisation of insect-like creatures they call "Selenites".


The Island of Dr. Moreau

The Island of Doctor Moreau is an 1896 science fiction novel by English author H. G. Wells. The text of the novel is the narration of Edward Prendick, a shipwrecked man rescued by a passing boat who is left on the island home of Doctor Moreau, a mad scientist who creates human-like hybrid beings from animals via vivisection. The novel deals with a number of philosophical themes, including pain and cruelty, moral responsibility, human identity, and human interference with nature. Wells described it as "an exercise in youthful blasphemy."

The Island of Doctor Moreau is a classic of early science fiction and remains one of Wells' best-known books. The novel is the earliest depiction of the science fiction motif "uplift" in which a more advanced race intervenes in the evolution of an animal species to bring the latter to a higher level of intelligence. It has been adapted to film and other media on many occasions, with Charles Laughton (1933), Burt Lancaster (1977), and Marlon Brando (1996) as the mad doctor.

The War Of The Worlds

The War of the Worlds is a science fiction novel by English author H. G. Wells, first serialised in 1897 by Pearson's Magazine in the UK and by Cosmopolitan magazine in the US. The novel's first appearance in hardcover was in 1898 from publisher William Heinemann of London. Written between 1895 and 1897, it is one of the earliest stories to detail a conflict between mankind and an extraterrestrial race. The novel is the first-person narrative of both an unnamed protagonist in Surrey and of his younger brother in London as southern England is invaded by Martians. The novel is one of the most commented-on works in the science fiction canon.

The plot has been related to invasion literature of the time. The novel has been variously interpreted as a commentary on evolutionary theory, British imperialism, and generally Victorian superstitions, fears, and prejudices. Wells said that the plot arose from a discussion with his brother Frank about the catastrophic effect of the British on indigenous Tasmanians. What would happen, he wondered, if Martians did to Britain what the British had done to the Tasmanians? The Tasmanians, however, lacked the lethal pathogens to defeat their invaders. At the time of publication, it was classified as a scientific romance, like Wells's earlier novel The Time Machine.

The War of the Worlds has been both popular (having never been out of print) and influential, spawning half a dozen feature films, radio dramas, a record album, various comic book adaptations, a number of television series, and sequels or parallel stories by other authors. It was most memorably dramatised in a 1938 radio programme that allegedly caused public panic among listeners who did not know the Martian invasion was fiction. The novel has even influenced the work of scientists, notably Robert H. Goddard, who, inspired by the book, invented both the liquid fuelled rocket and multistage rocket, which resulted in the Apollo 11 Moon landing 71 years later.

The Time Machine is a science fiction novella by H. G. Wells, published in 1895 and written as a frame narrative. The work is generally credited with the popularization of the concept of time travel by using a vehicle or device to travel purposely and selectively forward or backward through time. The term "time machine", coined by Wells, is now almost universally used to refer to such a vehicle or device.

The Time Machine has been adapted into three feature films of the same name, as well as two television versions and many comic book adaptations. It has also indirectly inspired many more works of fiction in many media productions.

The Invisible Man is a science fiction novel by H. G. Wells. Originally serialized in Pearson's Weekly in 1897, it was published as a novel the same year. The Invisible Man the title refers to is Griffin, a scientist who has devoted himself to research into optics and invents a way to change a body's refractive index to that of air so that it neither absorbs nor reflects light and thus becomes invisible. He successfully carries out this procedure on himself, but fails in his attempt to reverse it. An enthusiast of random and irresponsible violence, Griffin has become an iconic character in horror fiction.

While its predecessors, The Time Machine and The Island of Doctor Moreau, were written using first-person narrators, Wells adopts a third-person objective point of view in The Invisible Man. The novel is considered influential, and helped establish Wells as the "father of science fiction". 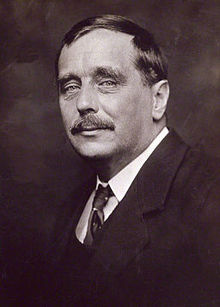 Herbert George Wells(21 September 1866 – 13 August 1946) was an English writer. Prolific in many genres, he wrote dozens of novels, short stories, and works of social commentary, history, satire, biography and autobiography. His work also included two books on recreational war games. Wells is now best remembered for his science fiction novels and is often called the "father of science fiction", along with Jules Verne and the publisher Hugo Gernsback.


During his own lifetime, however, he was most prominent as a forward-looking, even prophetic social critic who devoted his literary talents to the development of a progressive vision on a global scale. A futurist, he wrote a number of utopian works and foresaw the advent of aircraft, tanks, space travel, nuclear weapons, satellite television and something resembling the World Wide Web. His science fiction imagined time travel, alien invasion, invisibility, and biological engineering. Brian Aldiss referred to Wells as the "Shakespeare of science fiction". Wells rendered his works convincing by instilling commonplace detail alongside a single extraordinary assumption – dubbed “Wells’s law” – leading Joseph Conrad to hail him in 1898 as "O Realist of the Fantastic!". His most notable science fiction works include The Time Machine (1895), The Island of Doctor Moreau (1896), The Invisible Man (1897), The War of the Worlds (1898) and the military science fiction The War in the Air (1907). Wells was nominated for the Nobel Prize in Literature four times.