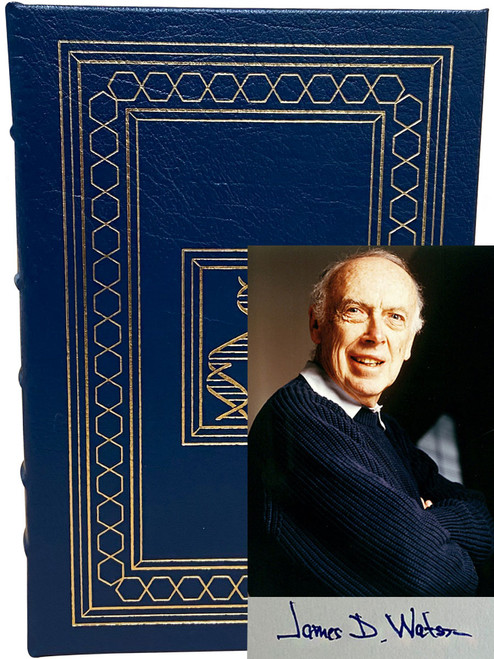 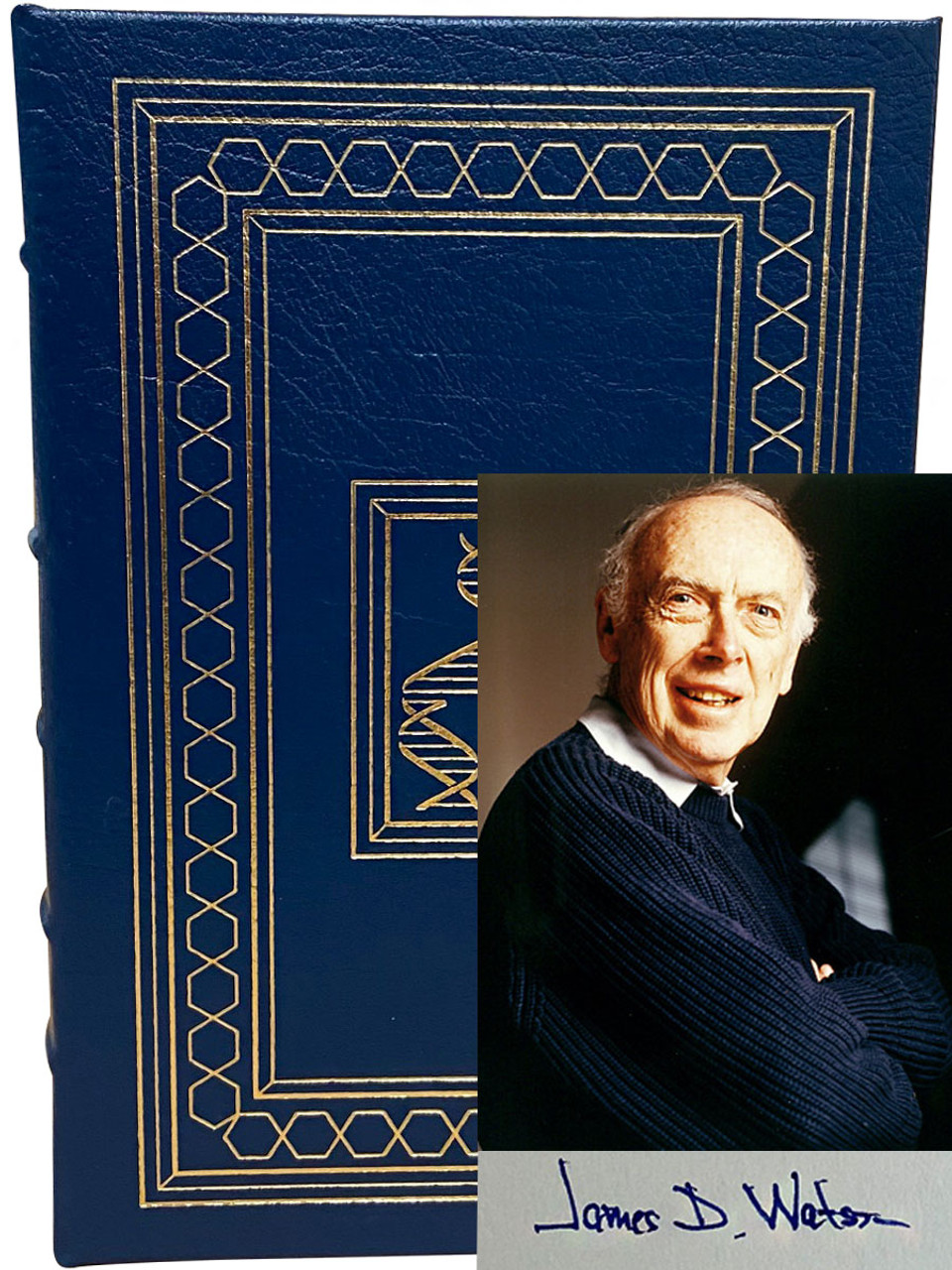 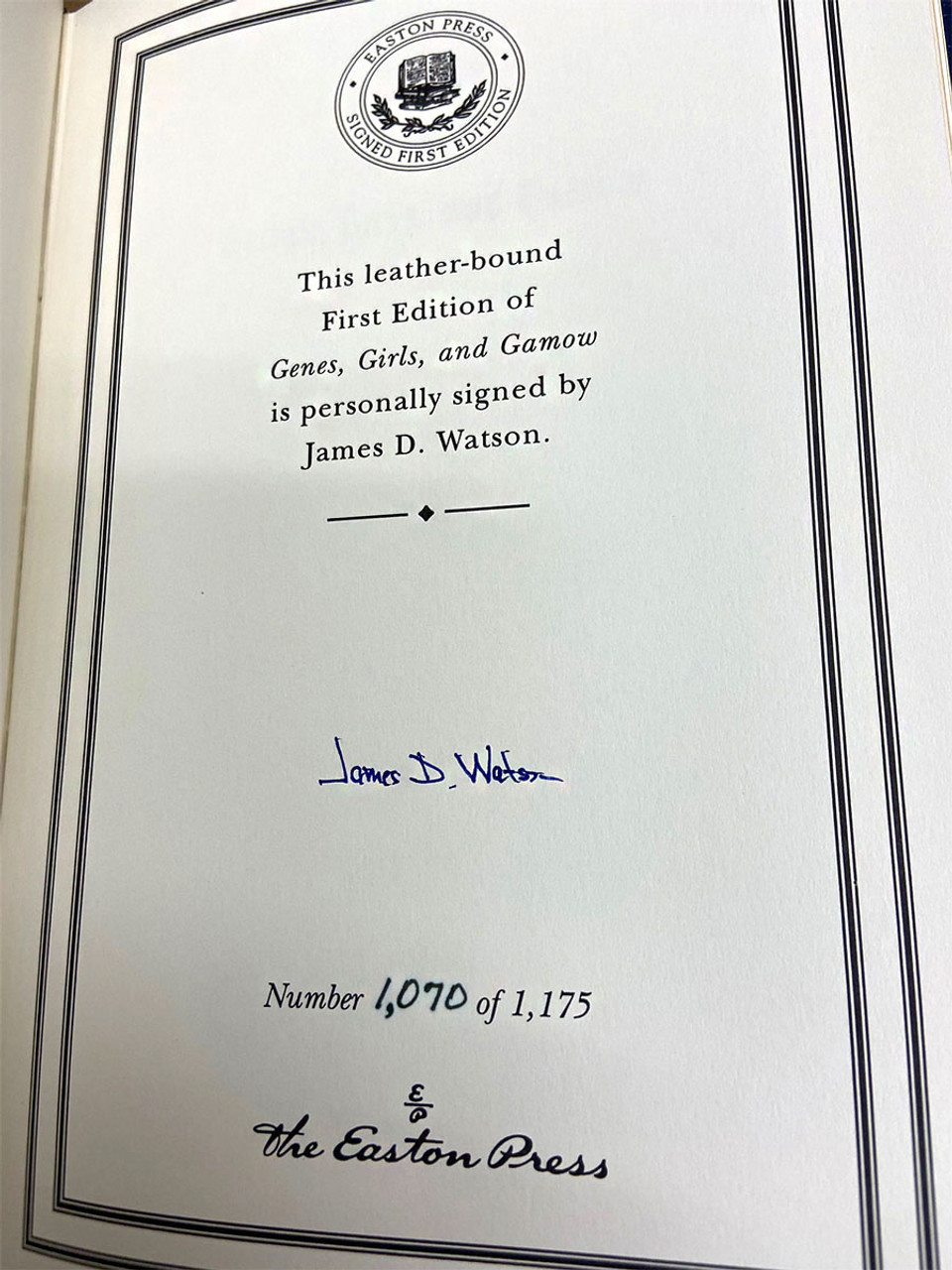 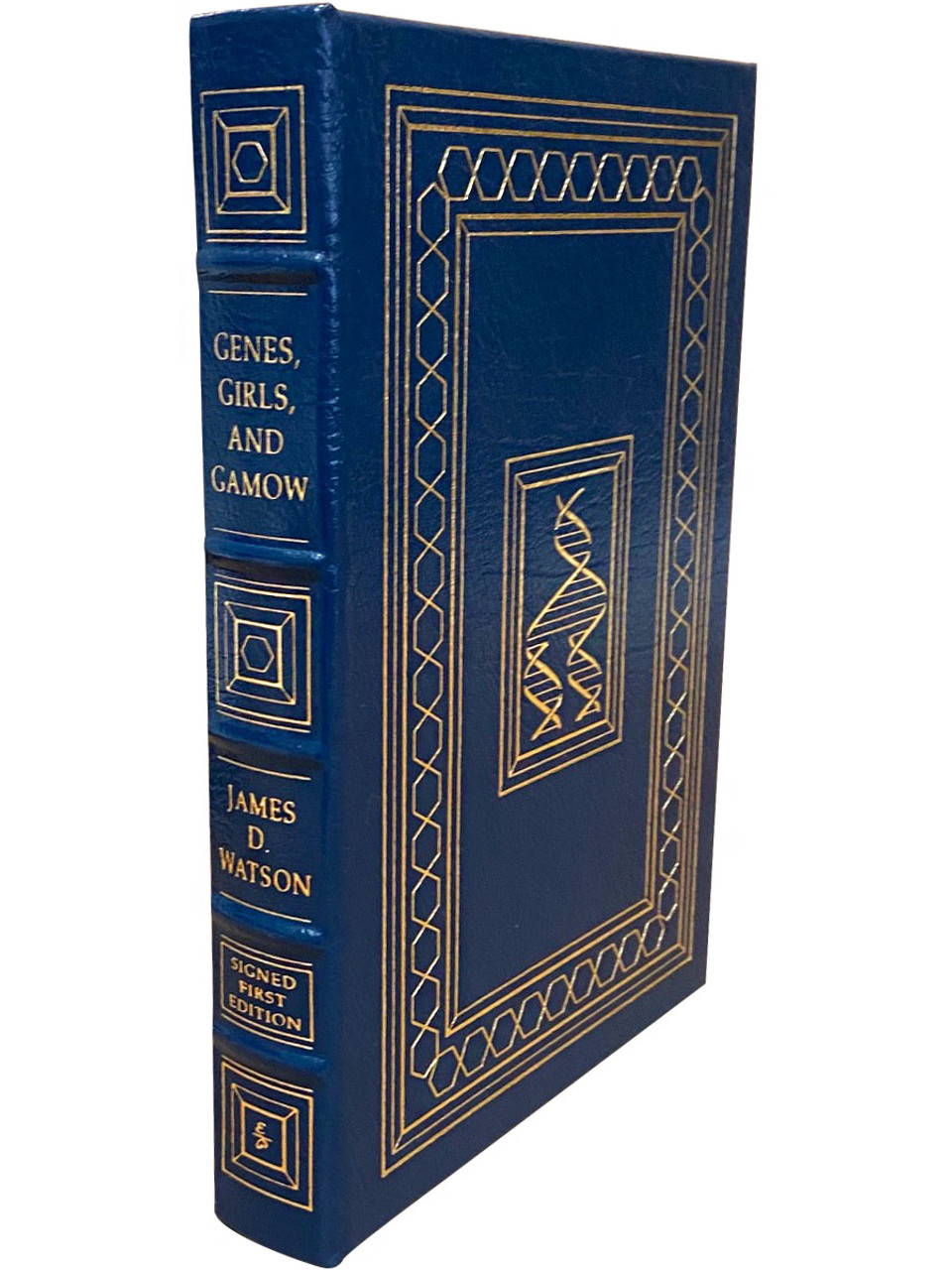 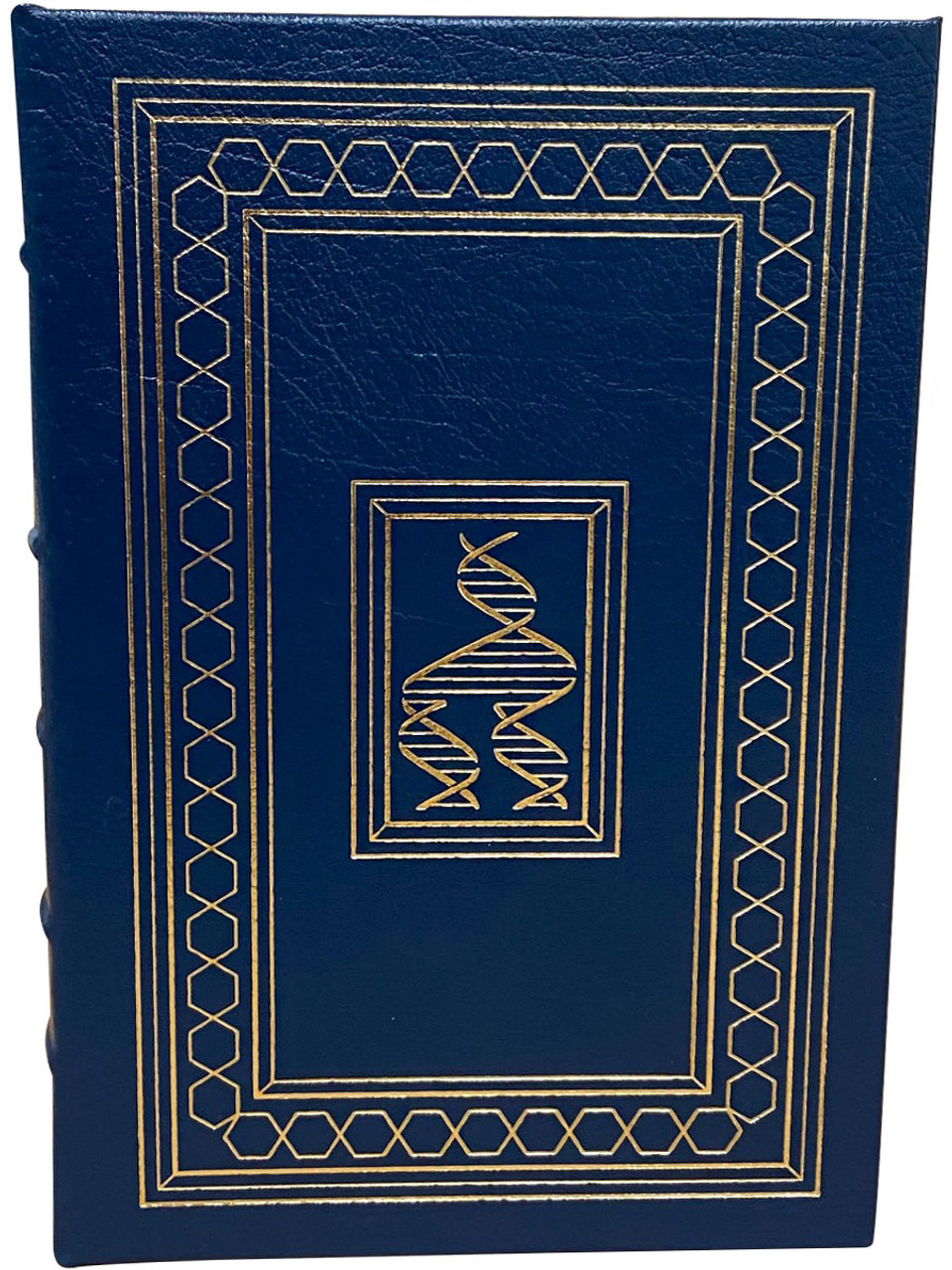 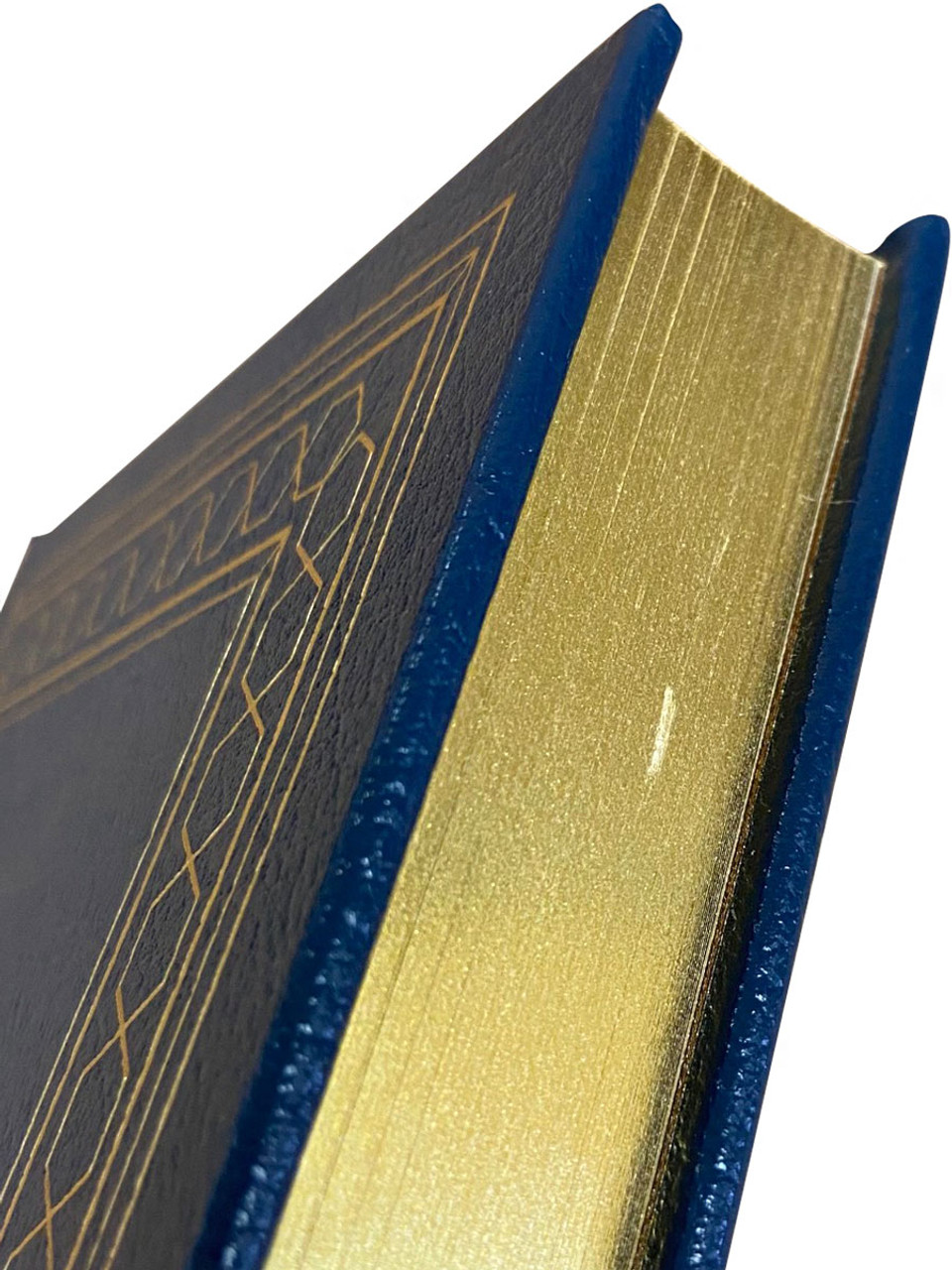 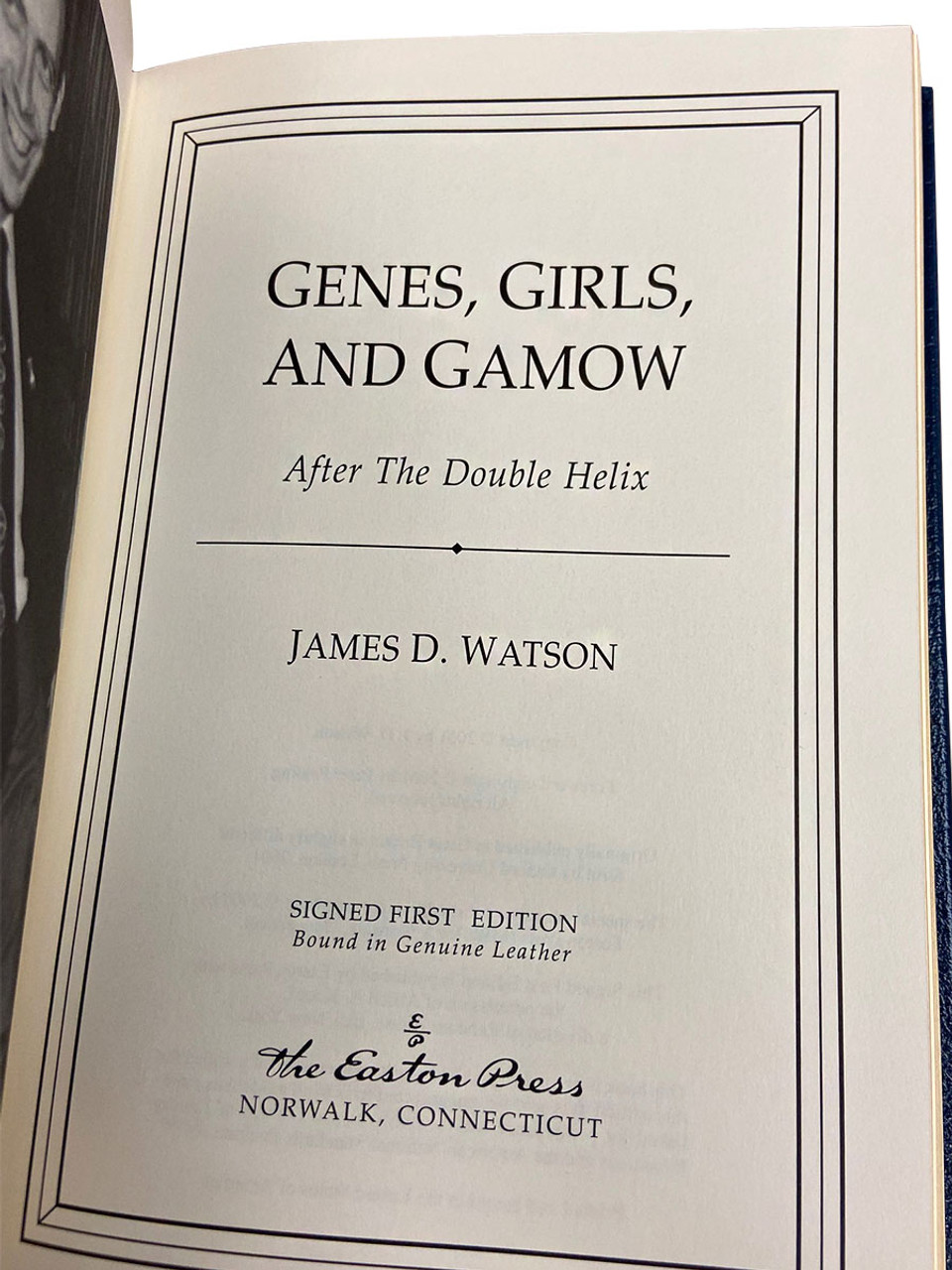 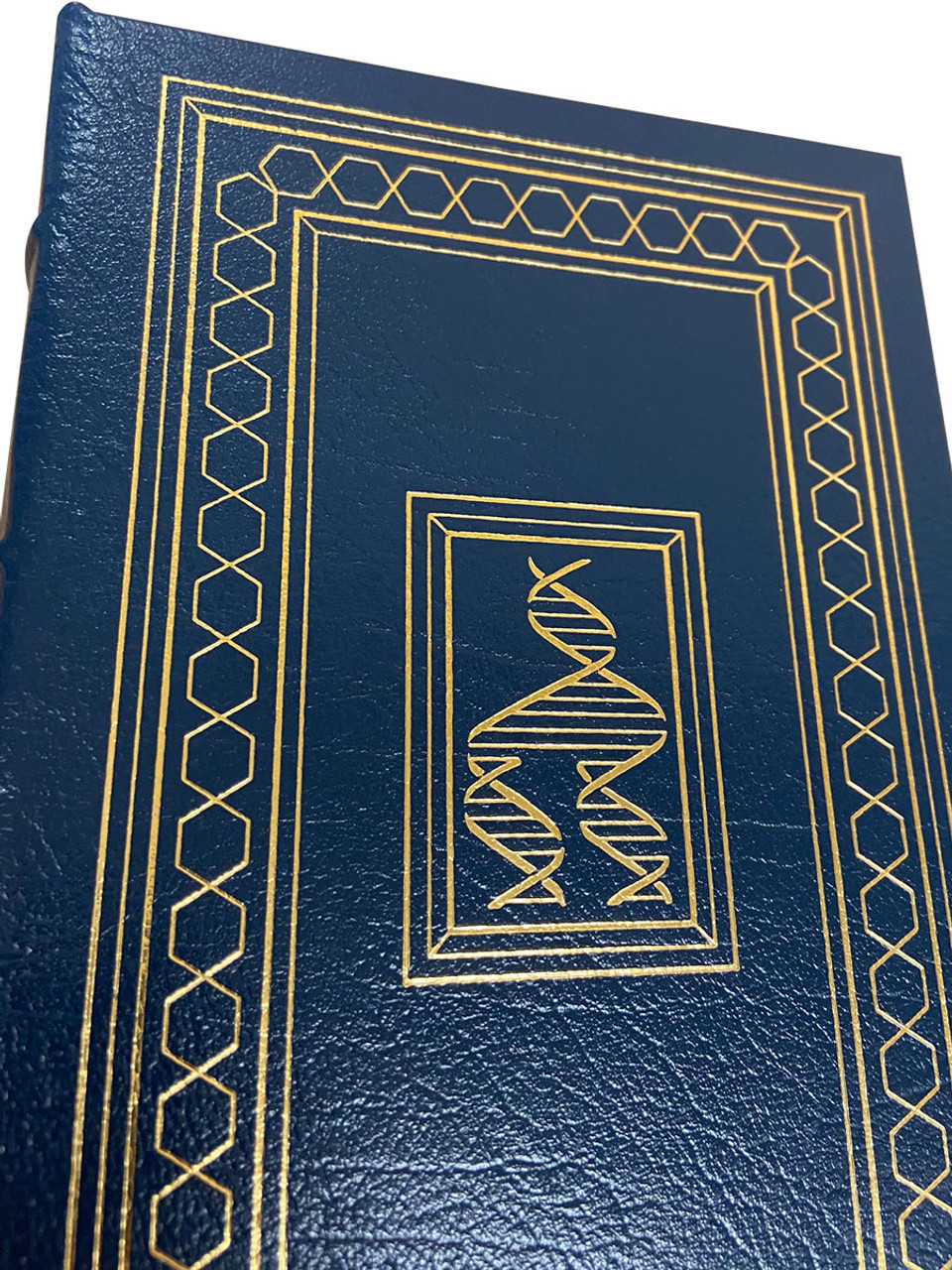 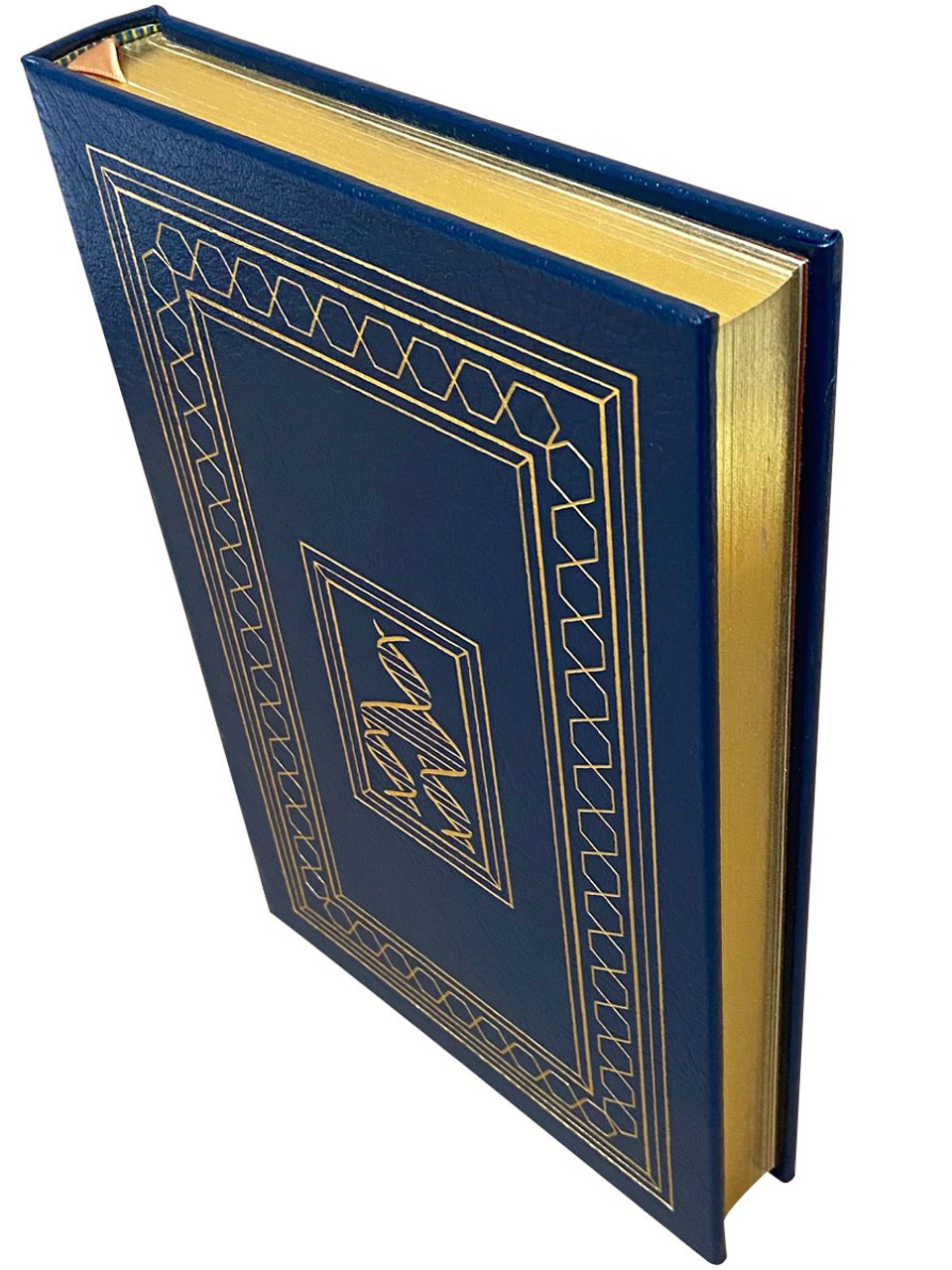 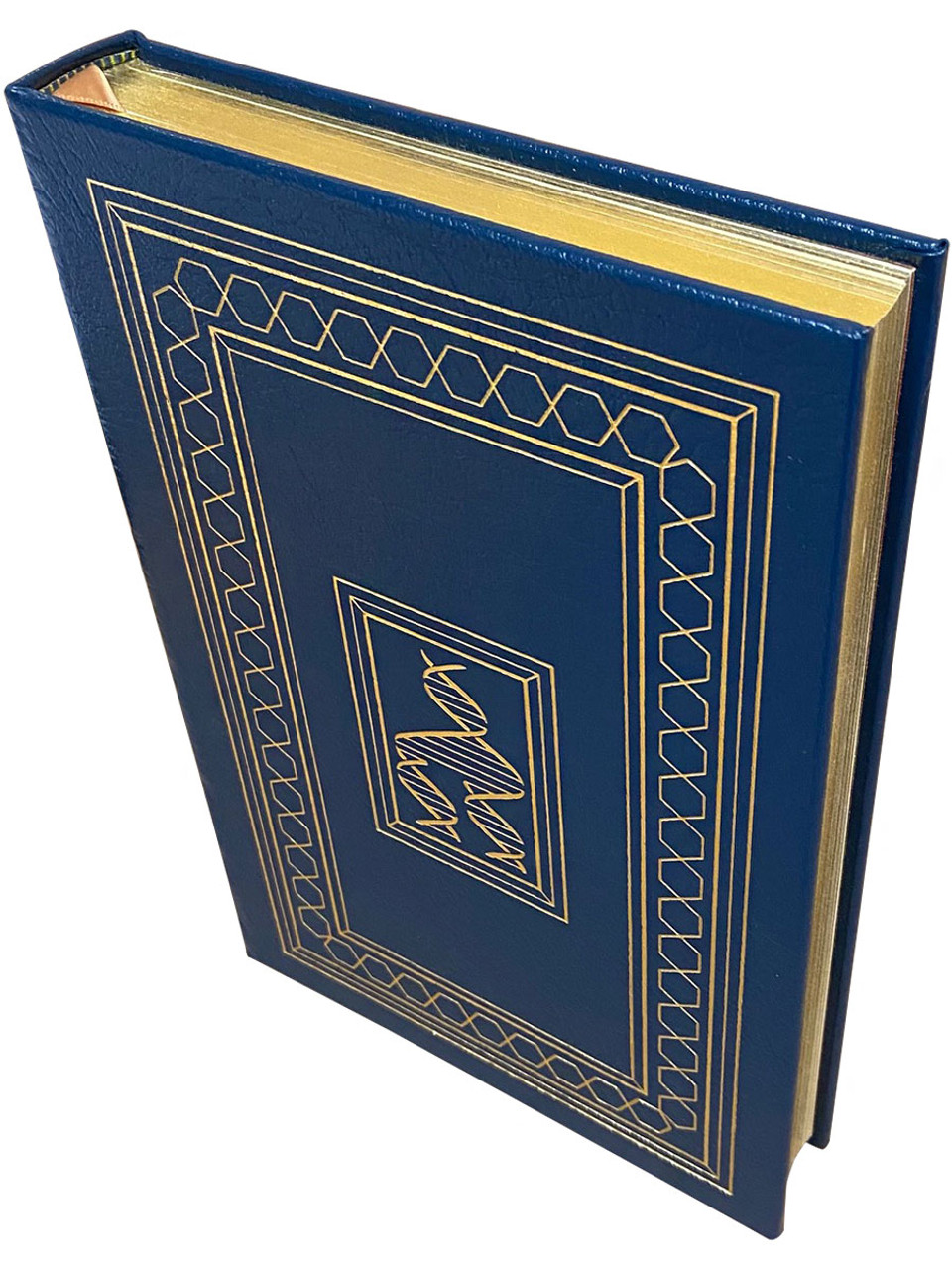 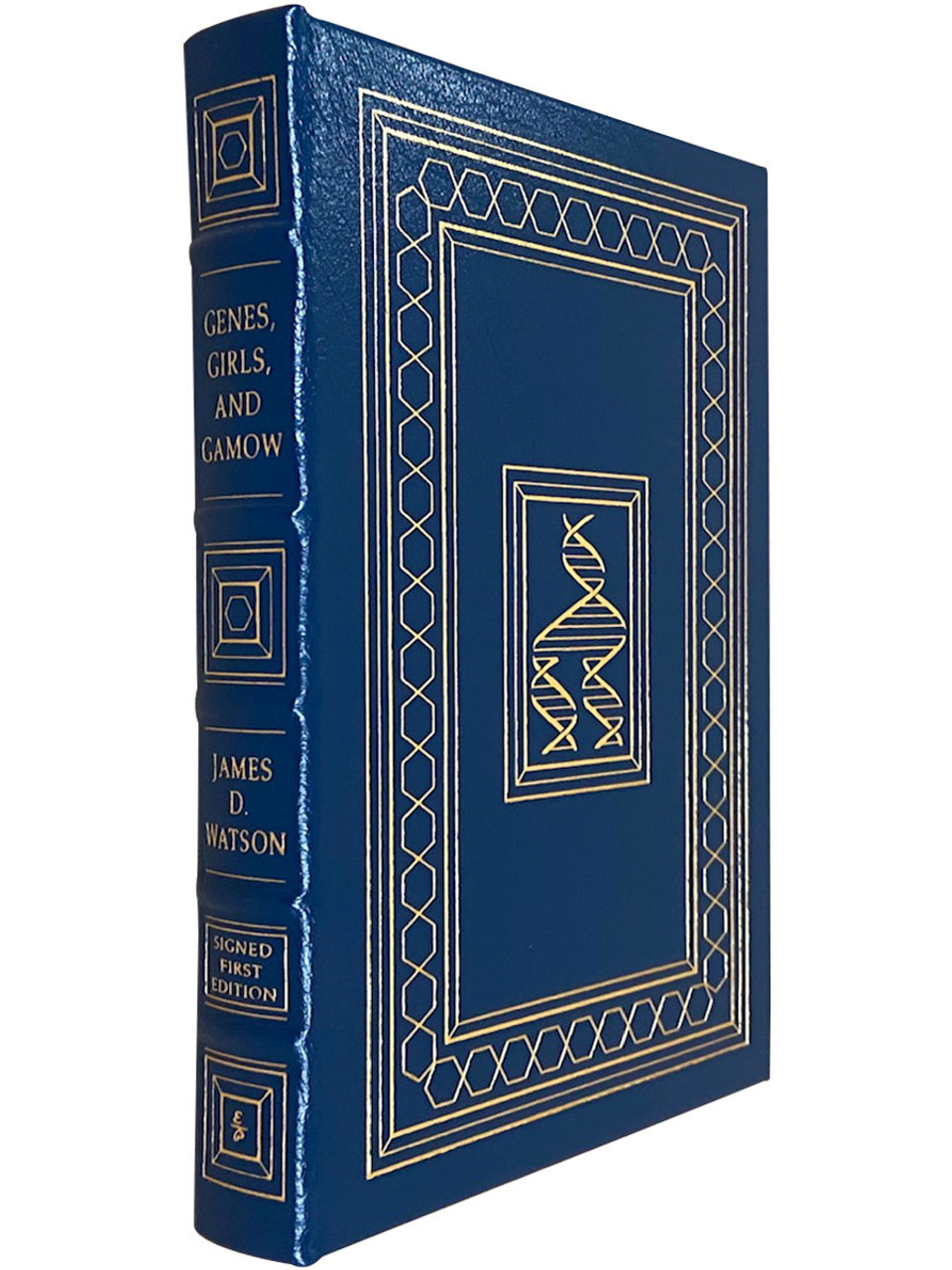 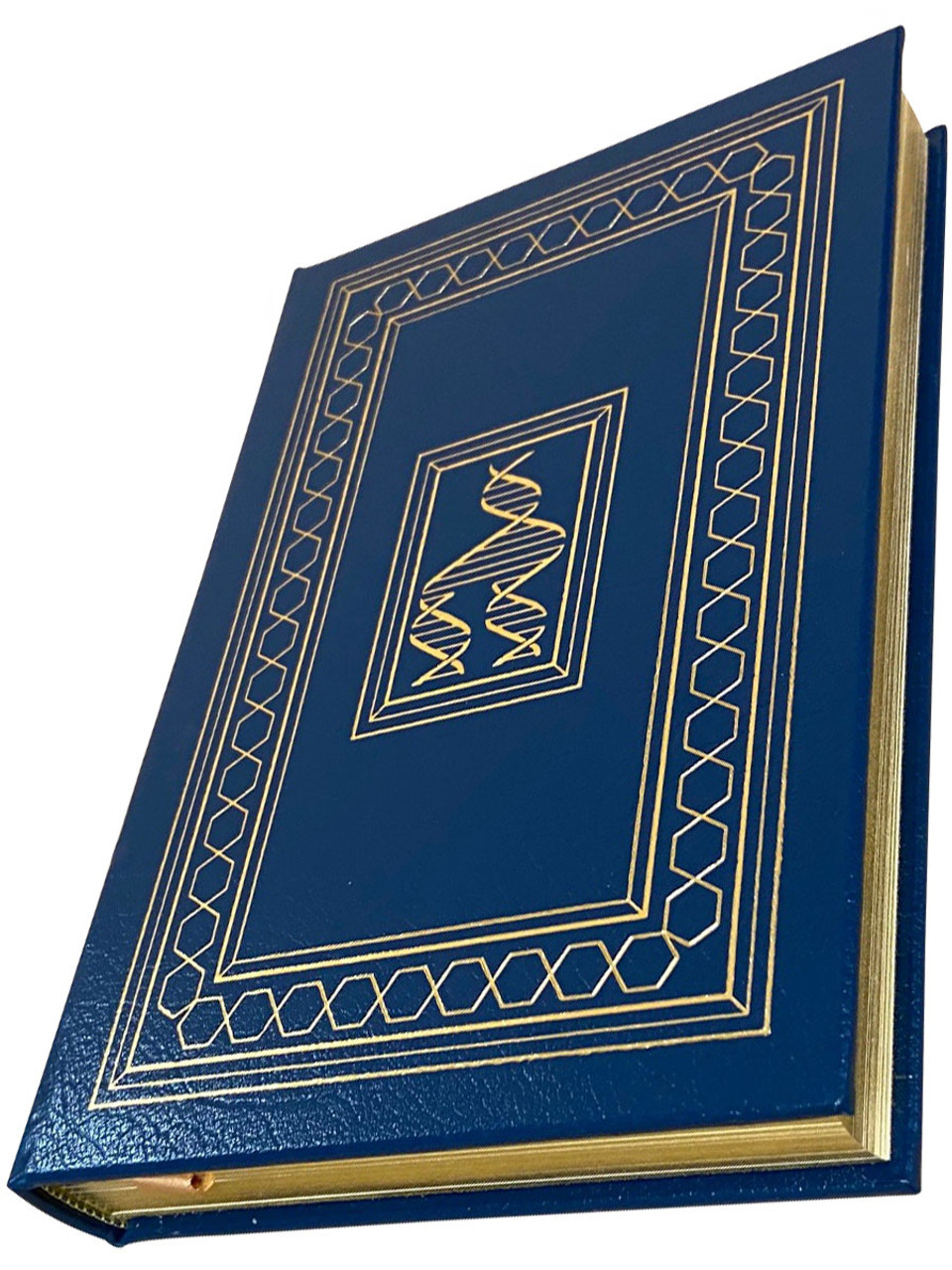 Enhance your collectible library with this luxurious leather bound heirloom from Easton Press. One of only 1,175 signed limited first editions available. A high quality book that also makes the perfect unique gift.

In the years following his and Francis Crick’s towering discovery of DNA, James Watson was obsessed with finding two things: RNA and a wife. Genes, Girls, and Gamow is the marvelous chronicle of those pursuits. Watson effortlessly glides between his heartbreaking and sometimes hilarious debacles in the field of love and his heady inquiries in the field of science. He also reflects with touching candor on some of science’s other titans, from fellow Nobelists Linus Pauling and the incorrigible Richard Feynman to Russian physicist George Gamow, who loved whiskey, limericks, and card tricks as much as he did molecules and genes. What emerges is a refreshingly human portrait of a group of geniuses and a candid, often surprising account of how science is done.

James Dewey Watson is an American molecular biologist, best known as one of the two co-discoverers of the structure of DNA, with Francis Crick, in 1953. Watson, Francis Crick, and Maurice Wilkins were awarded the 1962 Nobel Prize in Physiology or Medicine "for their discoveries concerning the molecular structure of nucleic acids and its significance for information transfer in living material".

The signature is certified as authentic by the presence of a COA included with this volume. A uniquely signed collectible from Easton Press, accented with 22kt gold, and manufactured to last generations.

In 1956, Watson became a junior member of Harvard University's Biological Laboratories until 1976, promoting research in molecular biology and from 1968 he served as director of Cold Spring Harbor Laboratory (CSHL) on Long Island, New York, greatly expanding its level of funding and research. At CSHL, he shifted his research emphasis to the study of cancer. In 1994, he became its president for ten years, and then subsequently he served as its chancellor until 2007, when he resigned, partially due to a controversy over comments he made about race and intelligence during an interview with a trusted friend that made it into the press.

Between 1988 and 1992, Watson was associated with the National Institutes of Health, helping to establish the Human Genome Project. Watson has written many science books, including the seminal textbook The Molecular Biology of the Gene (1965) and his bestsell ing book The Double Helix (1968) about the DNA structure discovery.