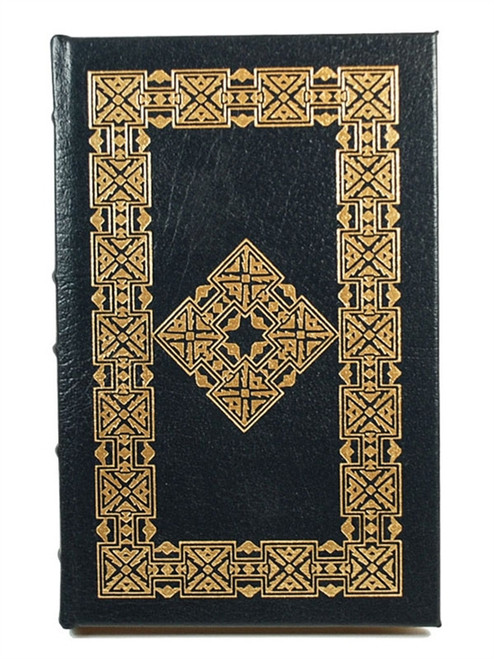 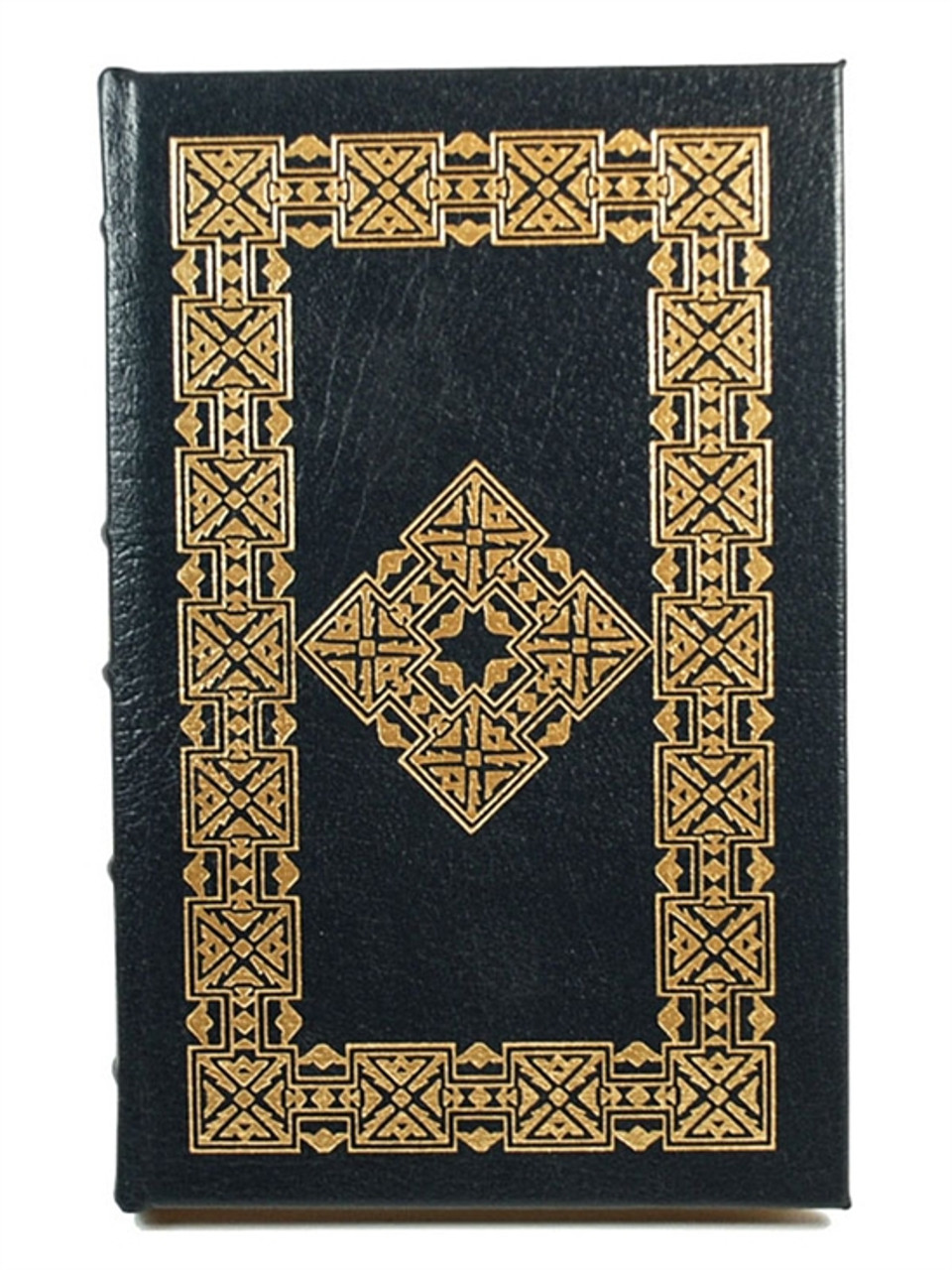 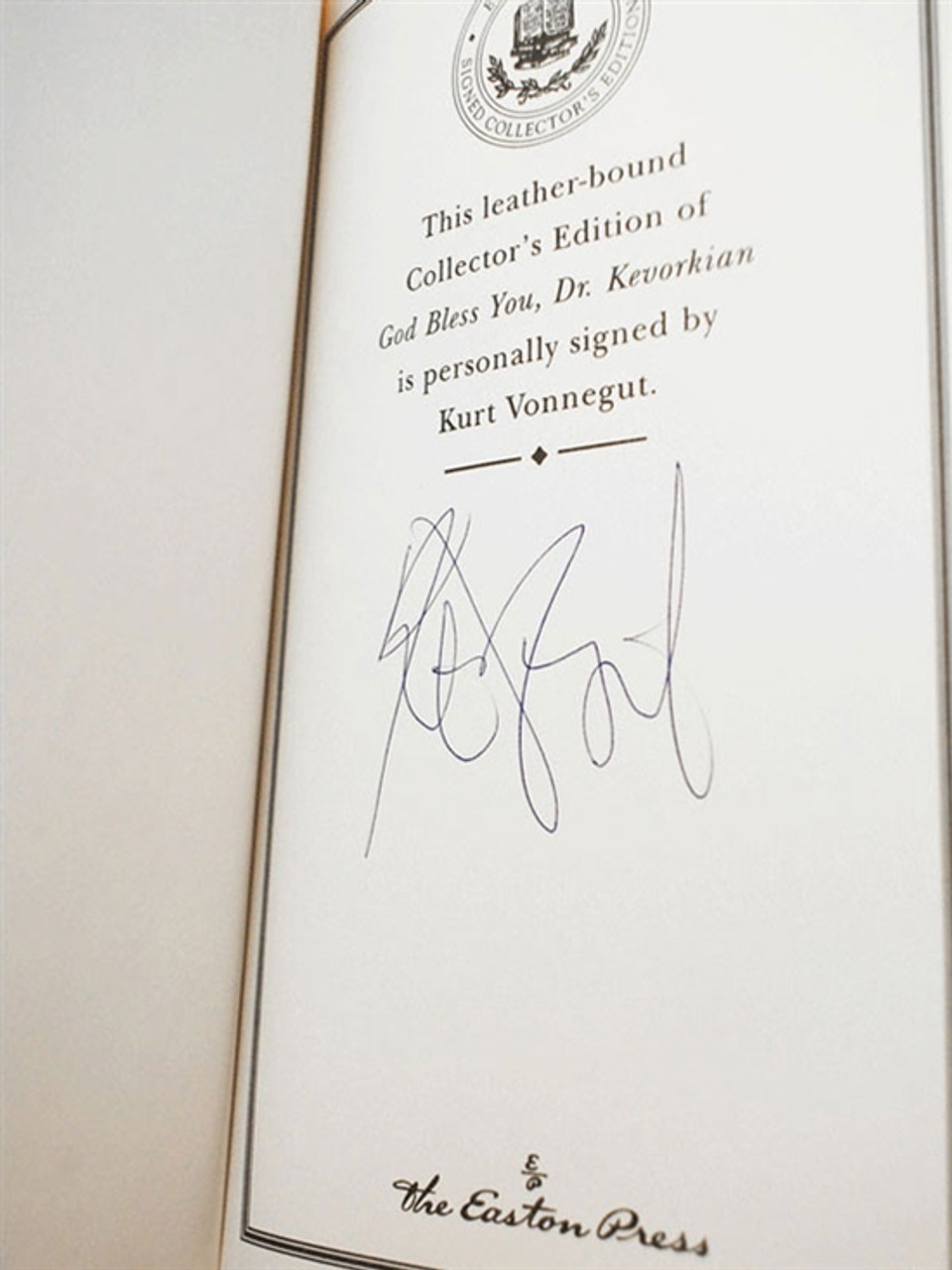 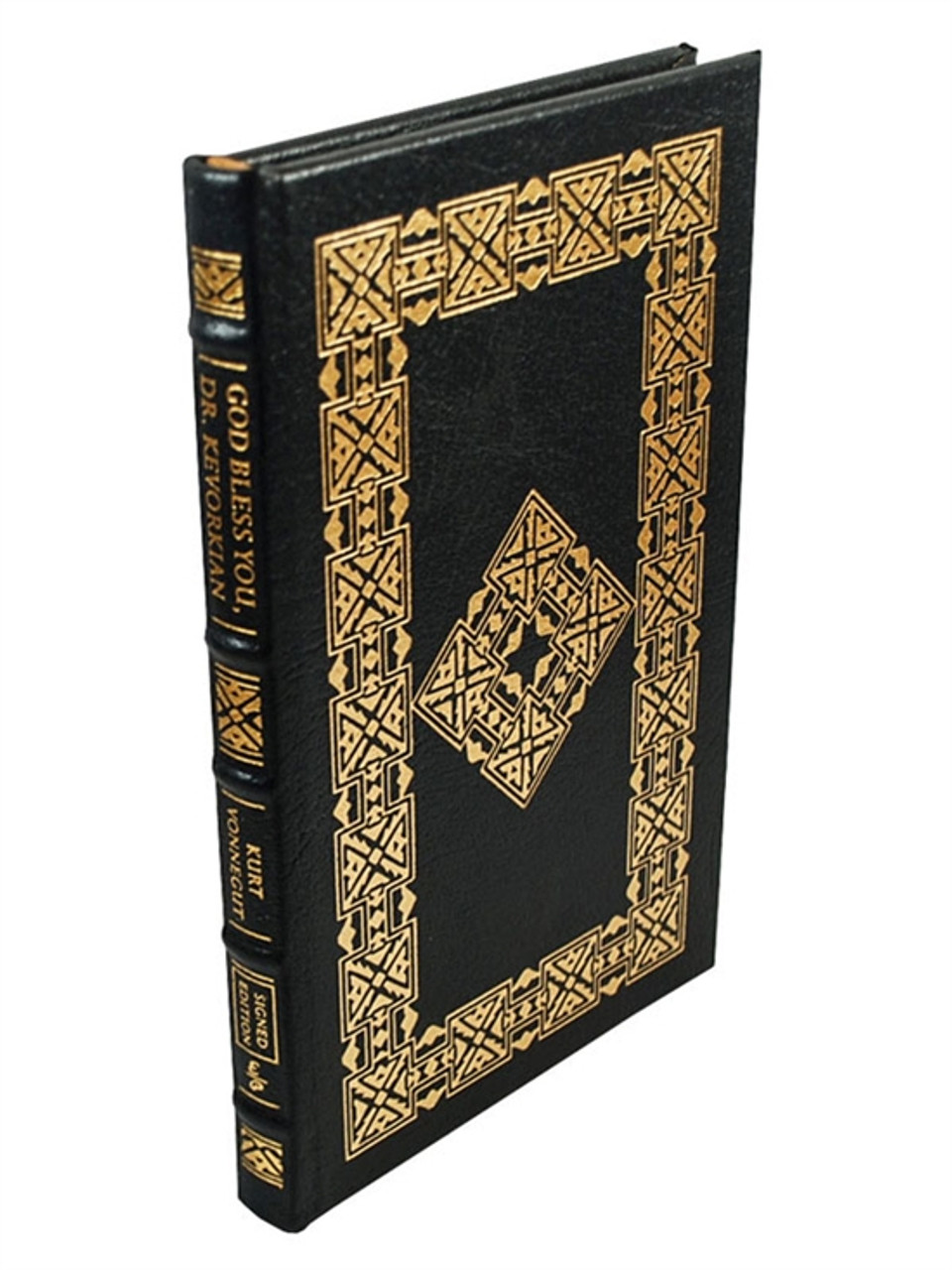 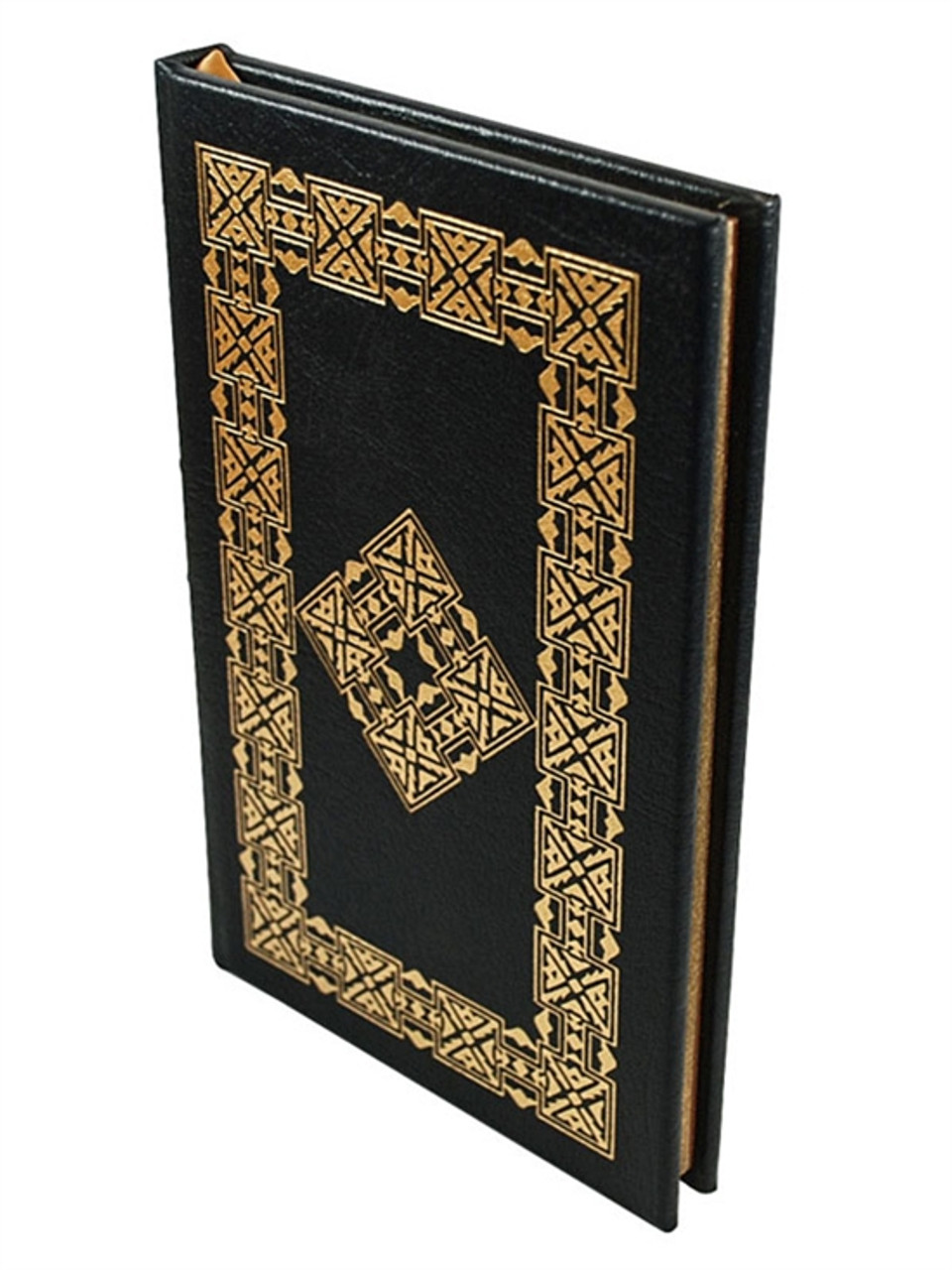 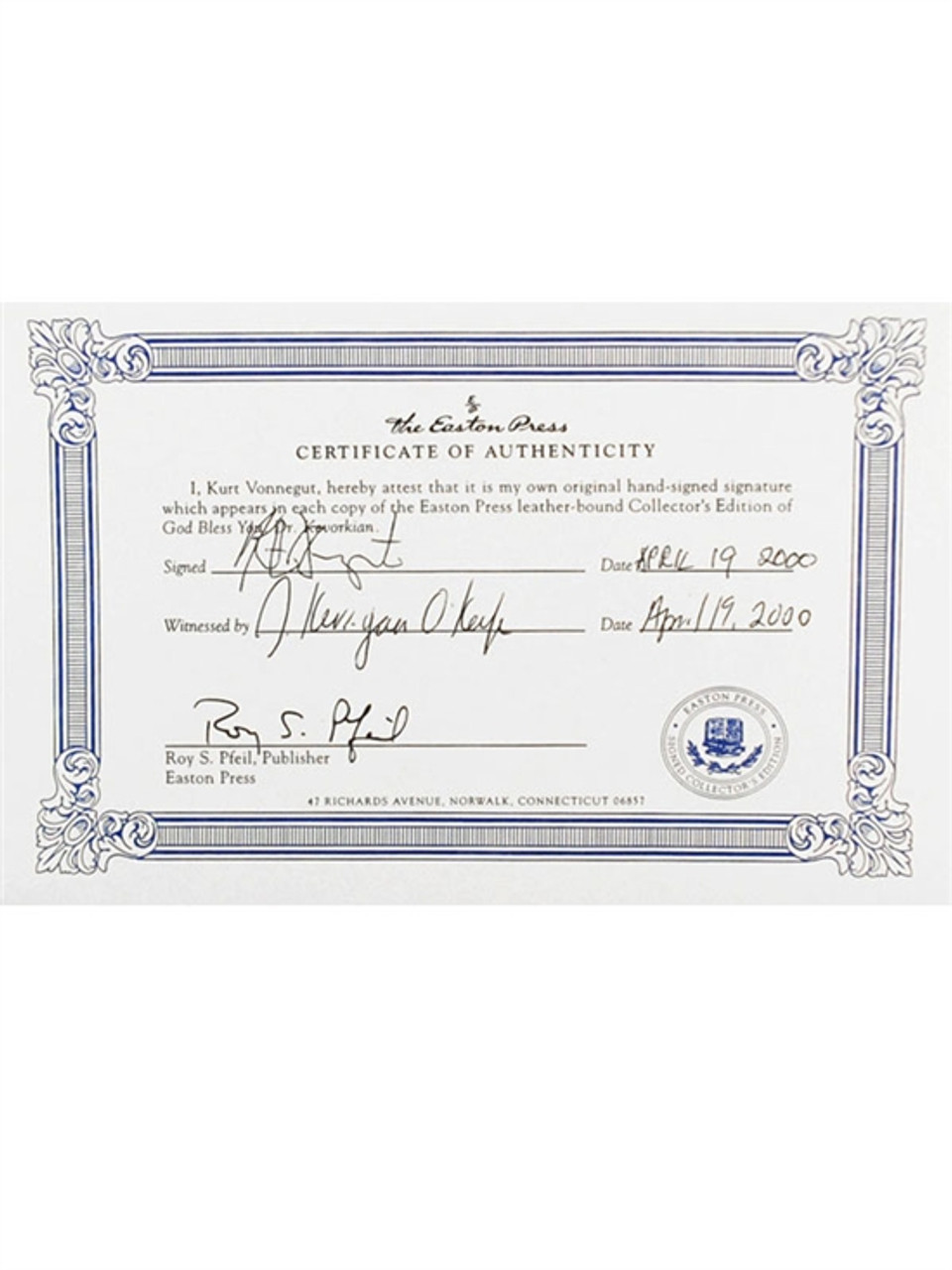 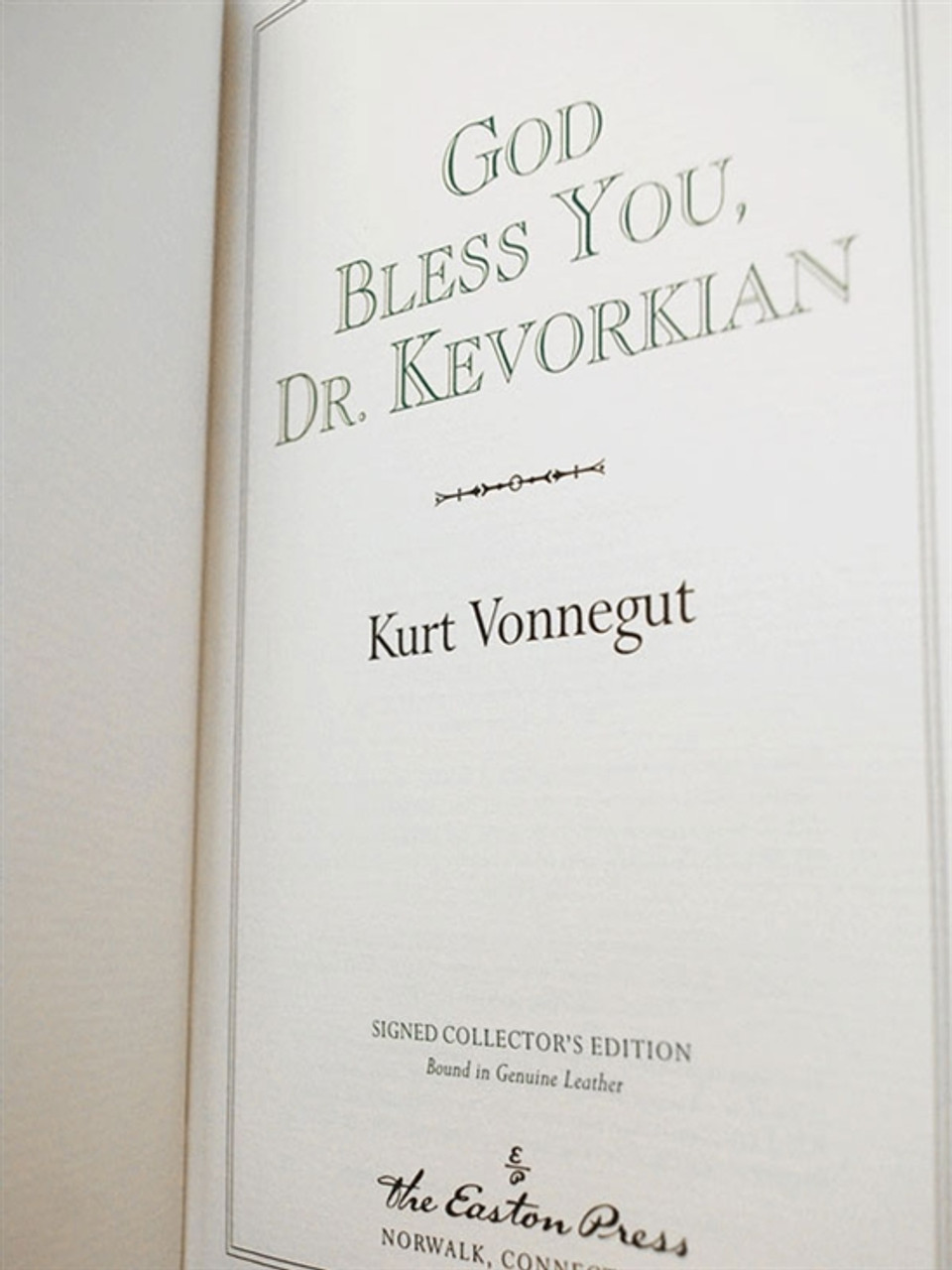 A signed limited edition, bound in premium blue leather with raised bands and a gilt stamped title on the spine. A beautiful copy that includes the publisher's Certificate of Authenticity.

Easton Press. Norwalk, CT. 2000. Kurt Vonnegut "God Bless You, Dr. Kevorkian". Signed Limited Collector's Edition. A great unique gift for yourself or for a loved one. A luxurious leather bound masterpiece from the Signed Modern Classics series by Easton Press. Beautifully illustrated and bound in full genuine leather. One of the most celebrated works of modern literature by a well-known writer. A rare signed limited edition for the discerning collector. 79 pages.

About
In what began as a series of quirkily characteristic ninety-second interludes for New York's public radio station, Kurt Vonnegut asks, on behalf of us all, the Big Questions. "Could death be a quality? A place? Not an ending but an occurrence that changes those to whom it happens?"

As a "reporter on the afterlife," Vonnegut bravely allows himself to be strapped to a gurney by his friend Jack Kevorkian and dispatched round-trip to the Pearly Gates. Or at least that's what he claims in the introduction to these thirty-odd comic and irreverent "interviews" with the likes of William Shakespeare, Adolf Hitler, and Clarence Darrow, bringing readers to an entirely new place -- a place to which only Vonnegut could bring us.

About the author
Kurt Vonnegut, Jr. (November 11, 1922 � April 11, 2007) was a 20th century American writer. His works such as Cat's Cradle (1963), Slaughterhouse-Five (1969) and Breakfast of Champions (1973) blend satire, gallows humor and science fiction. As a citizen he was a lifelong supporter of the American Civil Liberties Union and a critical liberal intellectual. As for ethics he was known for his humanist beliefs and was honorary president of the American Humanist Association.

The author's name appears in print as "Kurt Vonnegut, Jr." throughout the first half of his published writing career; beginning with the 1976 publication of Slapstick, he dropped the "Jr." and was simply billed as Kurt Vonnegut.

Very Fine. The condition is of the highest quality. A wonderful bright clean copy. Free of markings, writings, or stamps. No attached bookplates or indication of any removed. Unread. Not even a single scratch on the gilded page edges.