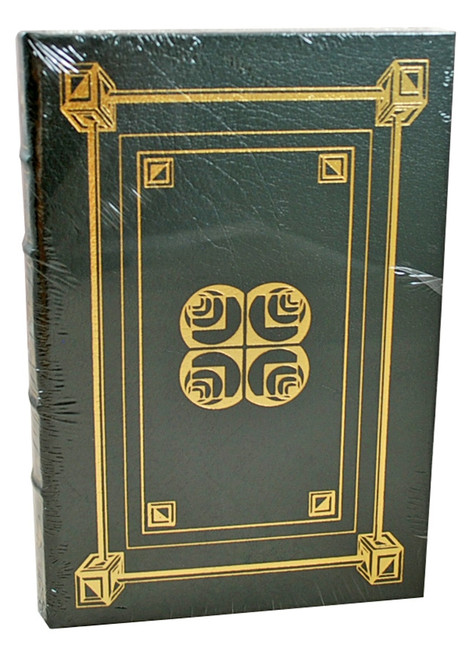 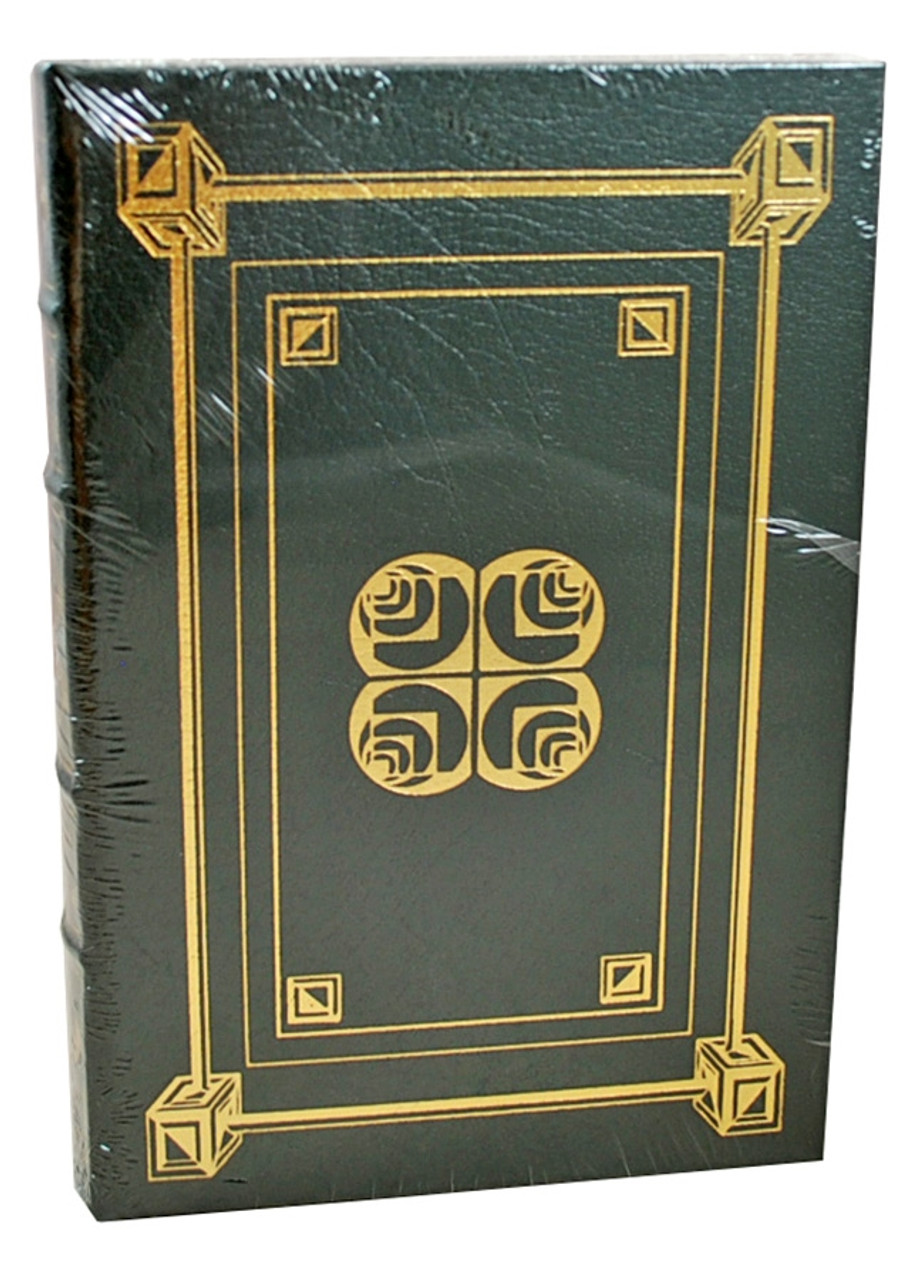 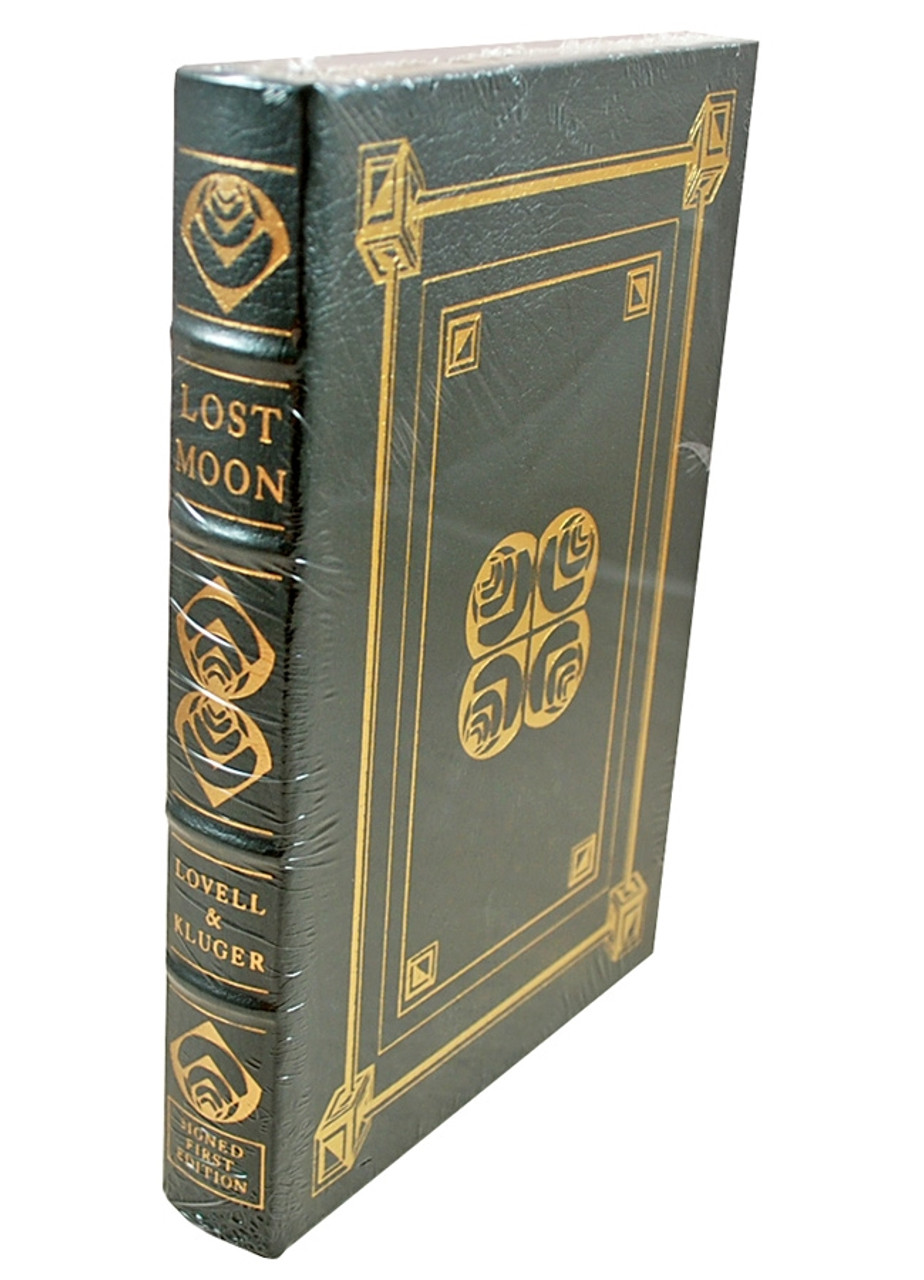 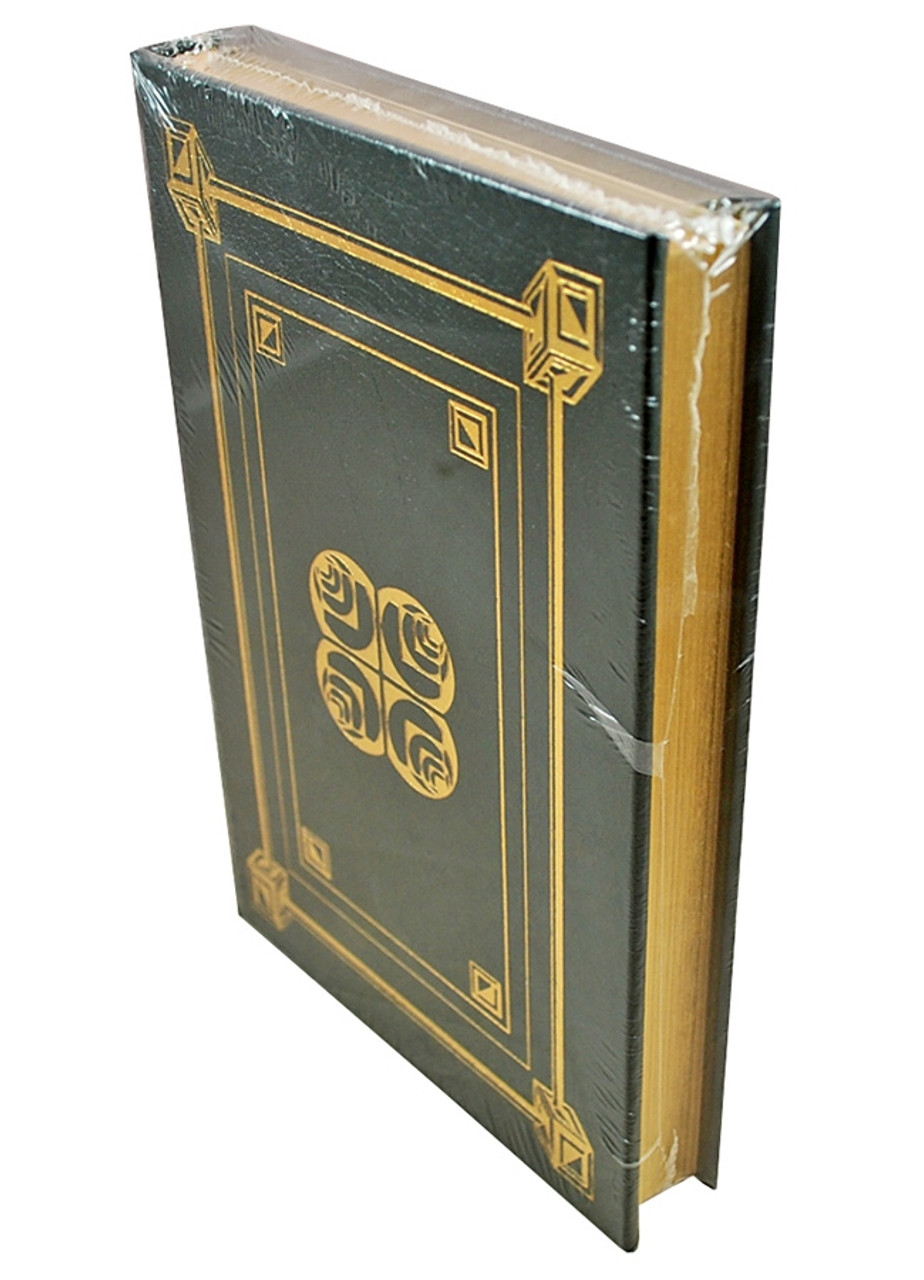 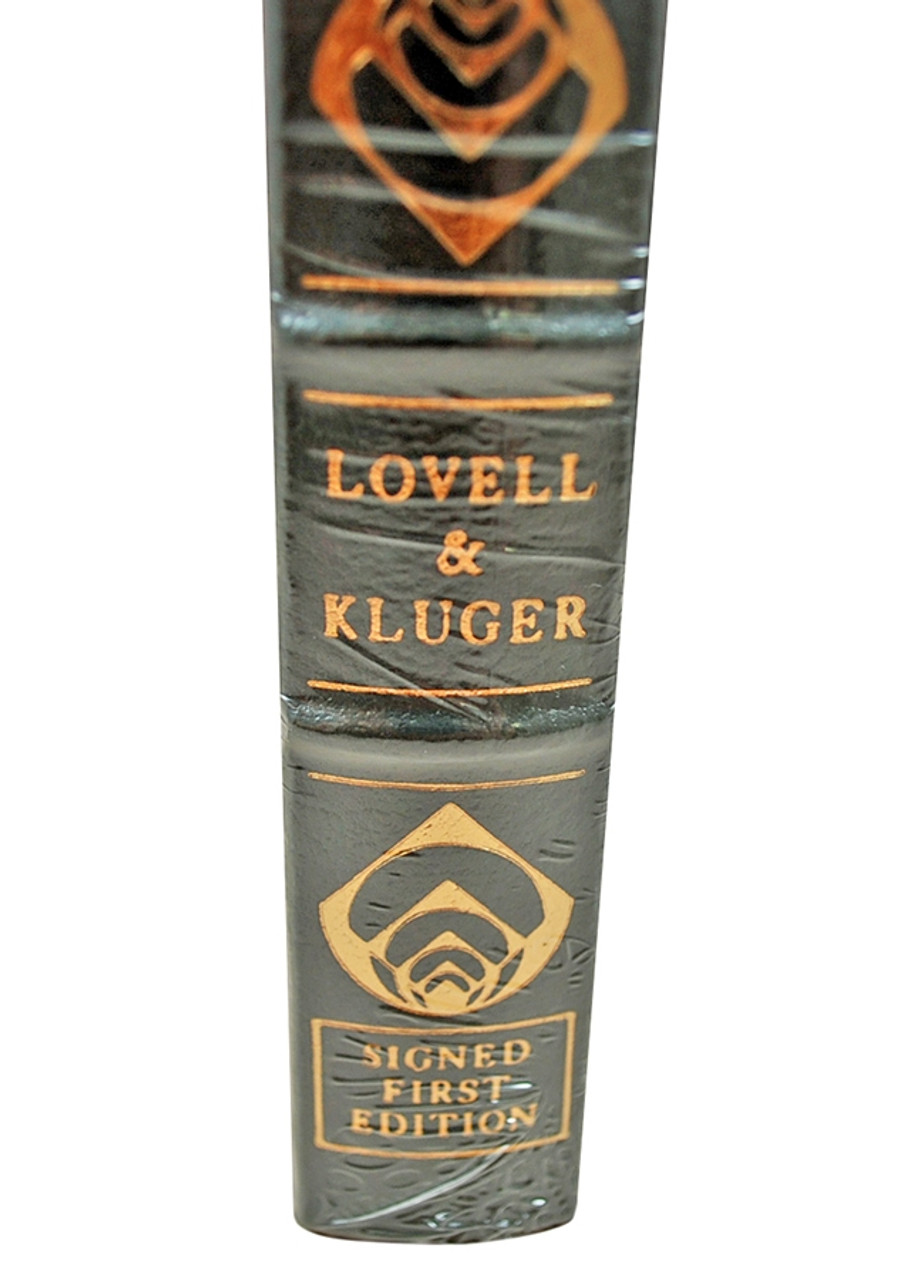 Norwalk, CT: Easton Press, (1994). "Lost Moon" James Lovell and Jeffrey Kluger. Signed First Edition. Full genuine leather. Limited Edition bound in full gilt-decorated gray leather. Black and white photographs. SIGNED by the authors Jeff Kluger and James Lovell, who not only commanded Apollo 13 through its various problems (he was played by Tom Hanks in the cinematic account of the voyage) but as a member of Apollo 8 was the first to orbit the moon.


In April 1970, during the glory days of the Apollo space program, NASA sent Navy Captain Jim Lovell and two other astronauts on America's fifth mission to the moon. Only fifty-five hours into the flight of Apollo 13, disaster struck: a mysterious explosion rocked the ship, and soon its oxygen and power began draining away. Commander Lovell and his crew watched in alarm as the cockpit grew darker, the air grew thinner, and the instruments winked out one by one.

The full story of the moon shot that almost ended in catastrophe has never been told, but now Lovell and coauthor Jeffrey Kluger bring it to vivd life. What begins as a smooth flight is transformed into a hair-raising voyage from the moment Lovell calls out, "Houston, we've got a problem." Minutes after the explosion, the astronauts are forced to abandon the main ship for the lunar module, a tiny craft designed to keep two men alive for just two days. But there are three men aboard, and they are four days from home. As the hours tick away, the narrative shifts from the crippled spacecraft to Mission Control, from engineers searching desperately for solutions to Lovell's wife and children praying for his safe return.

The entire nation watches as one crisis after another is met and overcome. By the time the ship splashes down in the Pacific, we understand why the heroic effort to rescue Lovell and his crew is considered by many to be NASA's finest hour. This riveting book puts the reader right in the spacecraft during one of the worst disasters in the history of space exploration. Written with all the color and drama of the best fiction, Lost Moon is the true story of a thrilling adventure and an astonishing triumph over nearly impossible odds. It was a major Oscar(R)-nominated motion picture directed by Ron Howard and starred Tom Hanks and Kevin Bacon

Out of the seven Apollo expeditions to land on the moon, six of the efforts succeeded outstandingly and one failed. Lost Moon is the story of the failure and the incredible heroism of the three astronauts who brought their crippled vehicle back to earth. This account--written by Jim Lovell, commander of the mission, and his talented coauthor, Jeffrey Kluger--captures the high drama of that unique event and is told in the vernacular of the men in the sky and on the ground who masterminded this triumph of heroism, intellectual brilliance, and raw courage. A thrilling story of a thrilling episode in the history of space exploration.

Astronaut Lovell and Kluger, a contributing editor at Discover magazine, take us on the terrifying voyage of unlucky Apollo 13. Launched in April 1970 and manned by Lovell, Jack Swigert and Jack Haise, Apollo 13 was scheduled to orbit the moon while Lovell and Haise descended to its surface. En route, though, a cyogenic tank exploded, causing a loss of oxygen and power in the command module. Luckily, the LEM, the lunar module that was to land on the moon, was uninjured and the astronauts could survive briefly on its oxygen. What unfolds is a story of courage as the astronauts and the personnel at Mission Control in Houston labored to return the spacecraft to Earth. First, there was the crucial alignment to ascertain the position of the spacecraft. Then came the all-important "burn" to swing the spacecraft around the moon on a "free return" trajectory back to earth. And finally there was the important PC+2 burn to guide the ship to the South Pacific, making sure it would enter Earth's atmosphere precisely-if done wrong the craft would either incinerate or skip into orbit around the sun. Everything went perfectly and Apollo 13 splashed down in the Pacific. This is a gripping and frightening book that commands rapt attention.
Copyright 1994 Reed Business Information, Inc.

The lunar landing mission of Apollo 13, commanded by veteran astronaut Lovell, was to be the crowning accomplishment of his NASA career. However, little more than two days into the flight, an oxygen tank exploded, crippling the service module's electrical system and forcing the crew to abandon their mother ship and use the lunar module as a lifeboat. Lovell and Kluger's account of Mission Control's heroic efforts to figure out a way to bring the crew home safely and the astronauts' race against time in a freezing spacecraft provide the core of this gripping narrative. Shifting from the engineers' struggles in Houston to contractors' efforts across the country to the concerns of the astronauts' families, this work fleshes out Apollo 13's story more fully than earlier accounts (Henry Cooper's Thirteen: The Flight That Failed, LJ 3/15/73) and adds to the growing body of firsthand astronaut accounts of their pioneering flights. Highly recommended. --Thomas J. Frieling, Bainbridge Coll., Ga.
Copyright 1994 Reed Business Information, Inc.

Very Fine Guaranteed. Sealed without any flaws. Clean & straight boards. A wonderful bright clean copy with a square and tight spine. This edition is free of any markings, writings, or stamps. No bookplates attached or indication of any removed. The page edges are free of any marks, scratches, blemishes. Sharp corners that are not bumped.

Epilogue by Arthur C. ClarkeFirst on the Moon: A Voyage with Neil Armstrong, Michael Collins and Edwin E. Aldrin, Jr. is a book by the crew of the Apollo 11 Moon landing in collaboration with Gene...