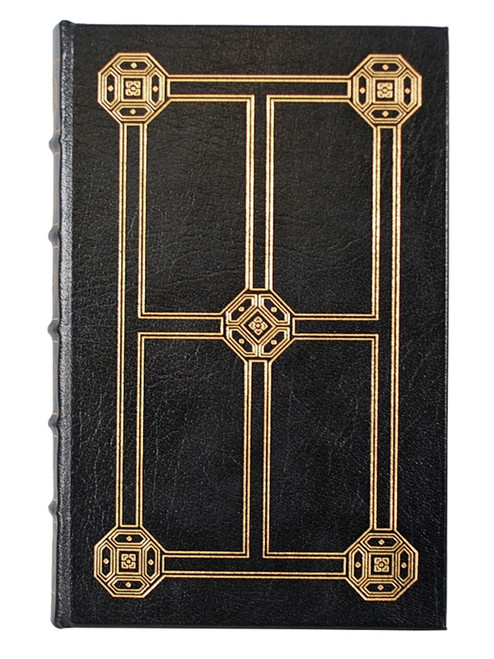 A rare Easton Press leather bound edition of one of the most controversial biographies in history. For the book collector: a deluxe, limited-edition issue of Mein Kampf. Originally published by Easton Press in 1994, the biography was pulled off the market at one time due to its controversial content. Currently, only very few copies are available for purchase anywhere. This edition is now OUT OF PRINT.

Easton Press, Norwalk. CT. "Mein Kampf" is part of the Books That Changes The World series. A deluxe leather binding, gold-plated embellishments, and pristine gilded pages make this rare book a valuable addition to any investor's collection, no matter what your political persuasion.

Mein Kampf, (in English: "My Struggle") by Adolf Hitler, combines elements of autobiography with an exposition of Hitler's political ideology. Hitler wrote much of Mein Kampf while imprisoned for political treason. After he was released from prison and assumed a political leadership role in 1933, his biography was available to the public in three editions. It was originally published in two volumes (the first in 1925 and another in 1926). In 1939, a limited-edition anniversary version was issued to commemorate the author's 50th birthday.

1. In the home of my parents.
2. Years of study and suffering in Vienna.
3. Political reflections arising out of my sojourn in Vienna.
4. Munich.
5. The world war.
6. War propaganda.
7. The revolution.
8. The beginning of my political activities.
9. The German Labor Party.
10. Race and people.
11. The first stage in the development of the German National Socialist Labor Party.

1. Weltanschauung and party.
2. The state.
3. Citizens and subjects of the state.
4. Personality and the ideal of the people's party.
5. Weltanschauung and organization.
6. The first period of our struggle.
7. The conflict with the red forces.
8. The strong is strongest when alone.
9. Fundamental ideas regarding the organization of the storm troops.
10. The mask of federalism.
11. Propaganda and organization.
12. The problem of the trade unions.
13. The German post-war policy of alliances.
14. Germany's policy in eastern Europe.
15. The right to self-defence.

The angry ranting of an obscure, small-party politician, the first volume of Mein Kampf was virtually ignored when it was originally published in 1925. Likewise the second volume, which appeared in 1926. The book details Hitler's childhood, the "betrayal" of Germany in World War I, the desire for revenge against France, the need for lebensraum for the German people, and the means by which the National Socialist party can gain power. It also includes Hitler's racist agenda and his glorification of the "Aryan" race.

The few outside the Nazi party who read it dismissed it as nonsense, not believing that anyone could--or would--carry out its radical, terrorist programs. As Hitler and the Nazis gained power, first party members and then the general public were pressured to buy the book. By the time Hitler became chancellor of the Third Reich in 1933, the book stood atop the German bestseller lists. Had the book been taken seriously when it was first published, perhaps the 20th century would have been very different.

Beyond the anger, hatred, bigotry, and self-aggrandizing, Mein Kampf is saddled with tortured prose, meandering narrative, and tangled metaphors (one person was described as "a thorn in the eyes of venal officials"). That said, it is an incredibly important book. It is foolish to think that the Holocaust could not happen again, especially if World War II and its horrors are forgotten. As an Amazon.com reader has pointed out, "If you want to learn about why the Holocaust happened, you can't avoid reading the words of the man who was most responsible for it happening." Mein Kampf, therefore, must be read as a reminder that evil can all too easily grow.

VERY NEAR FINE. A couple light faint superficial marks to the gilded page edges. Otherwise Fine. ,A wonderful bright clean copy free of any markings, writings, or stamps. Sharp corners that are not bumped. Tight and square spine. No attached bookplates or indication of any removed. The gilt designs on the covers and spine are not faded.